After yesterdays long hike from Valbona to Theth we checked into a delightful guesthouse. It was brand new, sparkling clean and super comfortable. The only downside was just as we were making the booking someone else beat us to it and we lost one of the nights. It still looked like the nicest option though so we decided to book our 1st and 3rd nights there and our middle night at the guesthouse next door. We were welcomed with a nice strong coffee in the garden with mountain views in all directions. The view from our bathroom was incredible and we were both laughing at what a great poo with a view we’re going to have. Theth is still retaining its cute village vibe with every guesthouse owning a nice plot of grassy land around it so the owners can have animals. But as tourism takes a tighter hold on Albania more big hotels will be built and the tranquil vibe will begin to diminish so we’re very happy to be visiting now. 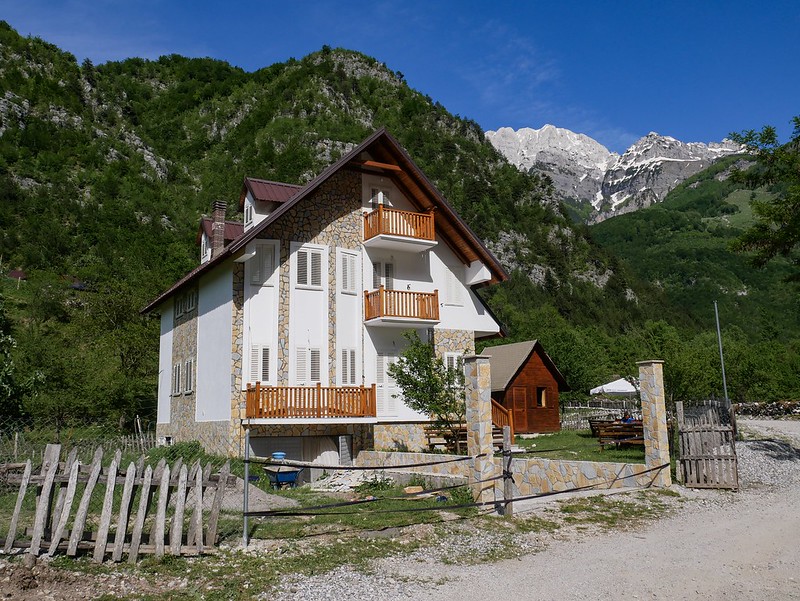 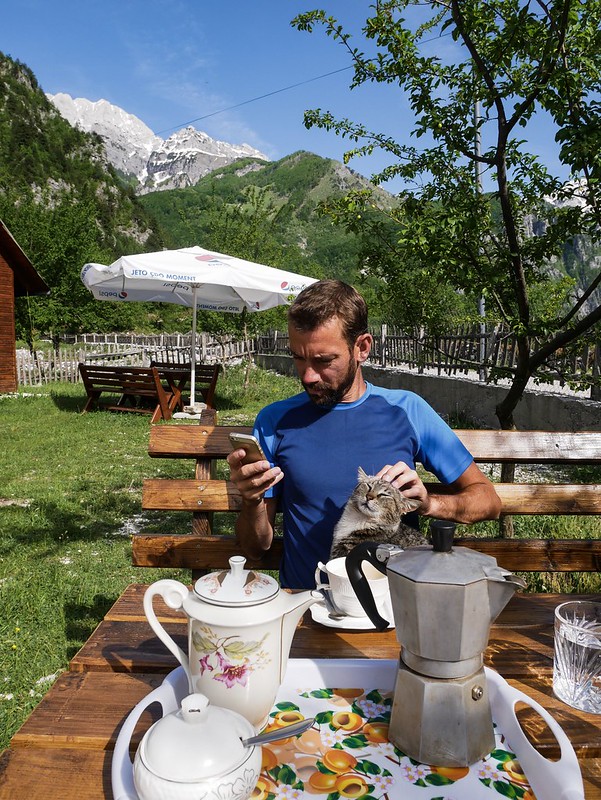 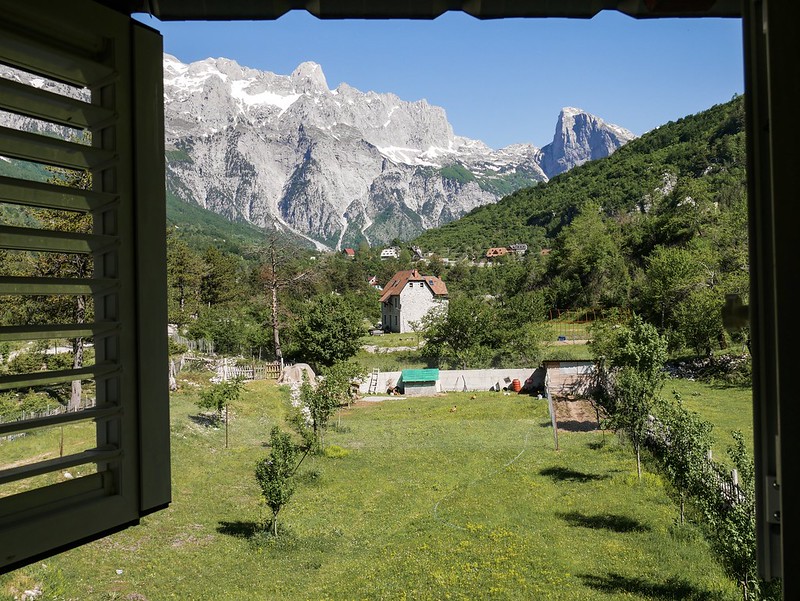 We headed straight out to see the Theth Church, built in the 19th century and previously used as the village hospital during the communist era, so many of the locals over 25 were born inside the stone and shingle building. The church had beautiful wooden tiles on the roof and a fabulous mountain backdrop. We arranged to have dinner for €10 per person at our guesthouse and I’m always quite excited to see what we’re served. This time we had a delicious blended vegetable soup, homemade pie, a greek style salad, fried vegetables and some pork for Craig. There was some oil and balsamic syrup on the table which I was very excited to find but after pouring the syrup the bottle sort of didn’t go back together properly and all of a sudden syrup started oozes out the sides like a volcanic eruption. It wouldn’t stop pouring out and we were frantically shoving napkins underneath in a poor attempt to protect the tablecloth which was already heavily soiled with the sticky sauce. 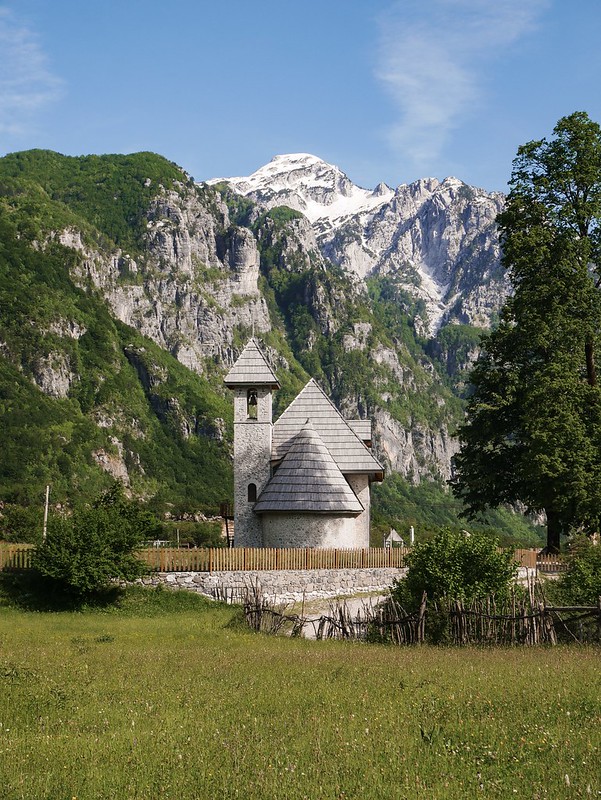 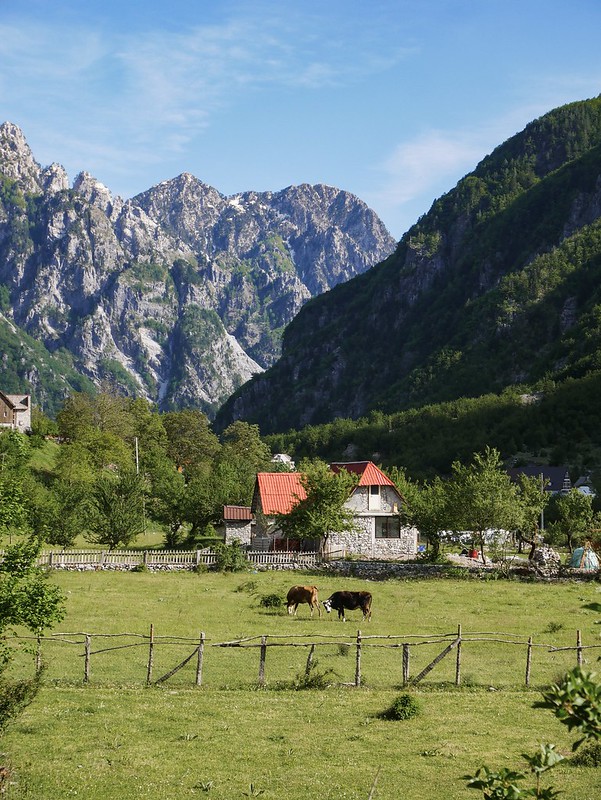 We pushed open our shutter the next morning to reveal crisp blue skies and a mountain view. Our host served us breakfast outside and it was so tasty compared to our previous home stay, she actually served us fresh fried eggs instead of ice cold ones. She also made these delicious sort of doughnut balls that we dipped into fresh honey and fig jam. The view we were enjoying breakfast with was nothing short of spectacular. 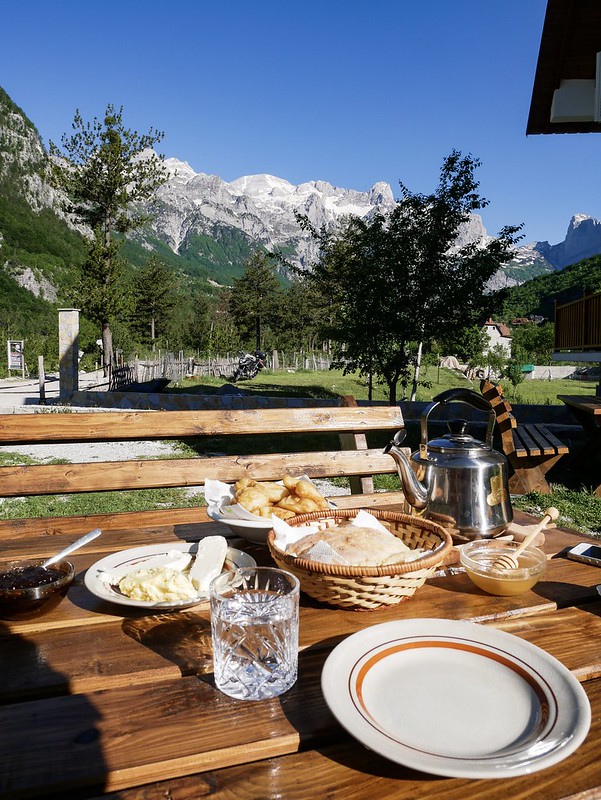 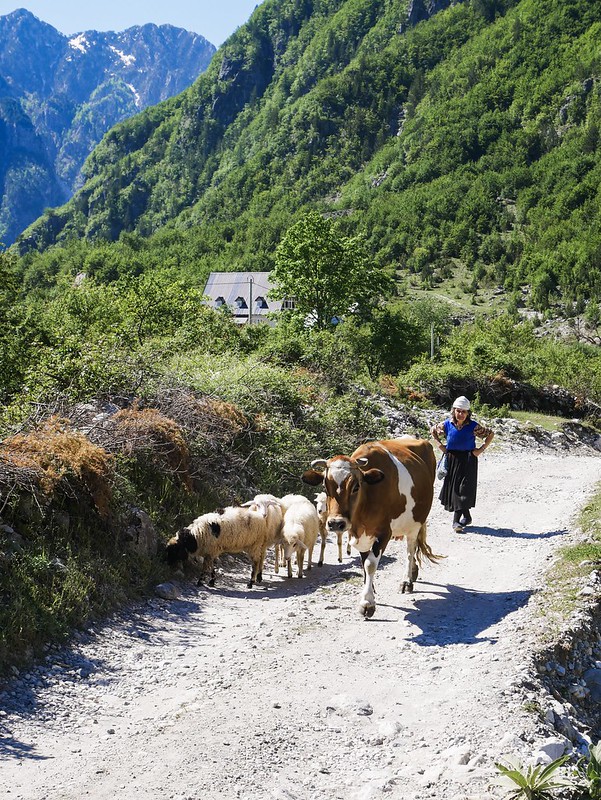 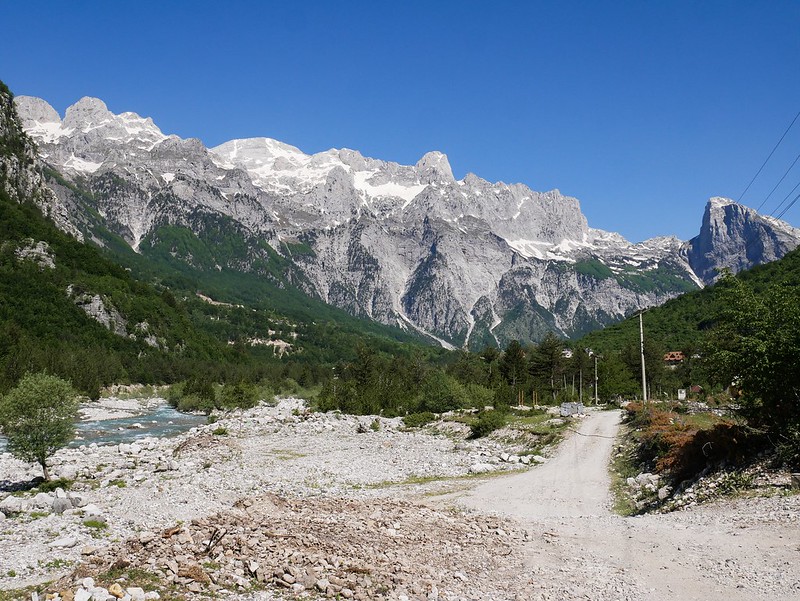 Today we planned to hike one of Theth’s most popular trails; The Blue Eye which is a beautiful fresh water spring supposedly resembling a big eye. It’s about a 17km return hike along an undulating track through a river valley. The river was a fabulous blue colour but too rough to swim in so we battled through the heat to our end goal. We passed through the tiny hamlet of Ndërlysaj where we crossed a wooden plank bridge across crystal clear water. It looked so inviting for a swim but once again we decided to push on to the blue eye. 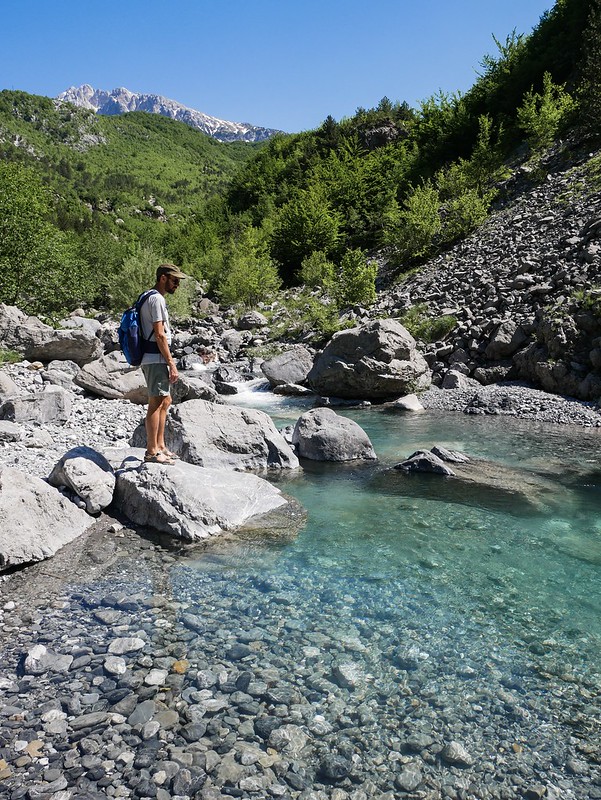 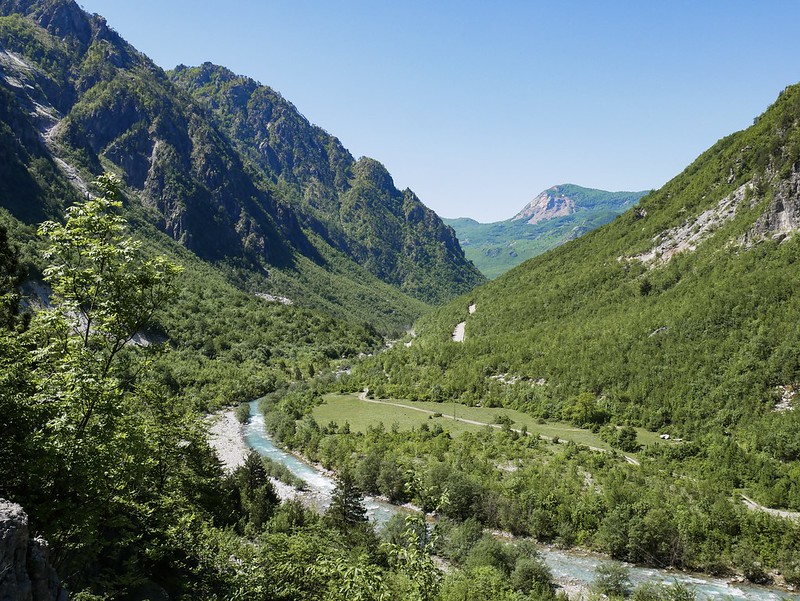 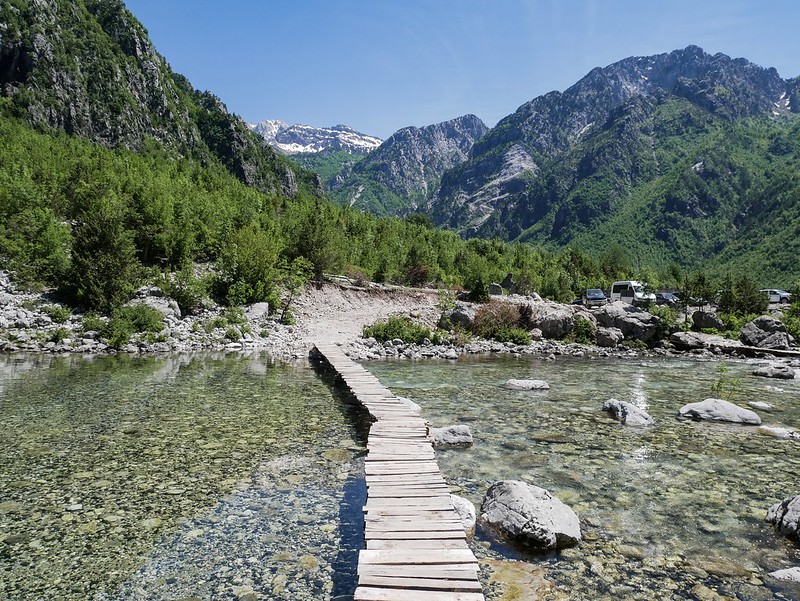 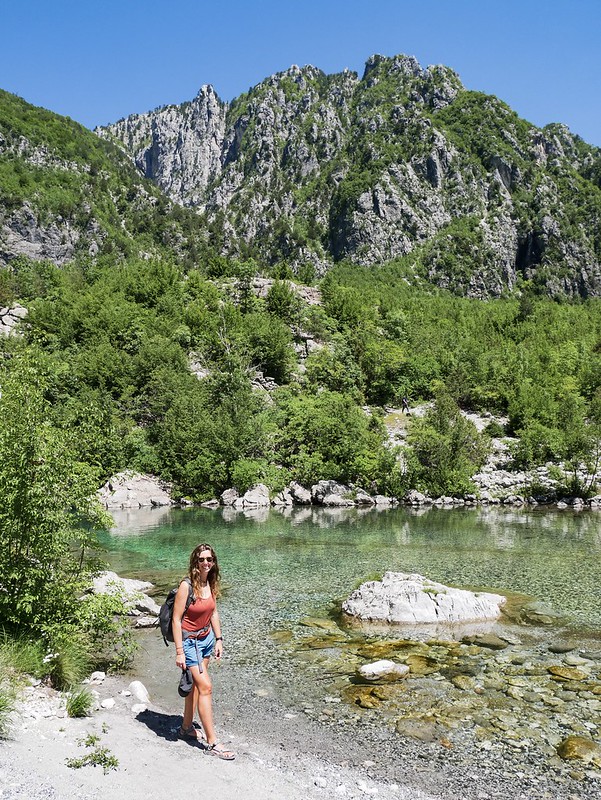 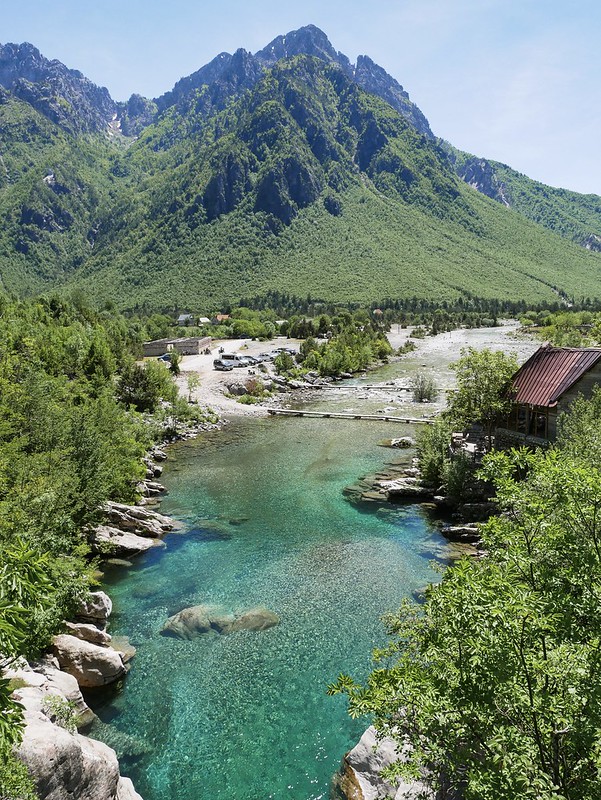 A little sign suggested the blue eye was left and straight on so we opted with the left route and discovered the most magical place. It was a river fed by the blue eye spring so the water was absurdly clear. In fact it was totally mesmerising and looked like a pool of gin. We got a great view of the aqua water from the bridge and decided we couldn’t wait any longer for a swim. Craig went in first and said it was unbearably cold so he was out the water in a flash. I tried to encourage him to swim a little further into the river to a particularly blue area but it was too cold for him so I decided to give it a go. Holy crap, he was right, it was so cold it took my breath away. Maybe it was because my body was so hot the coldness shocked me more but it was like swimming in the arctic sea, actually it was like swimming in glacial melt. 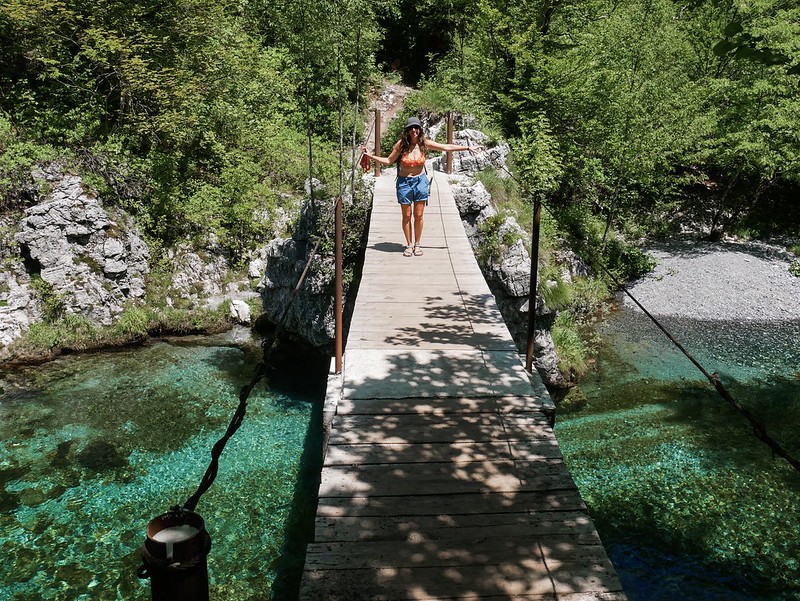 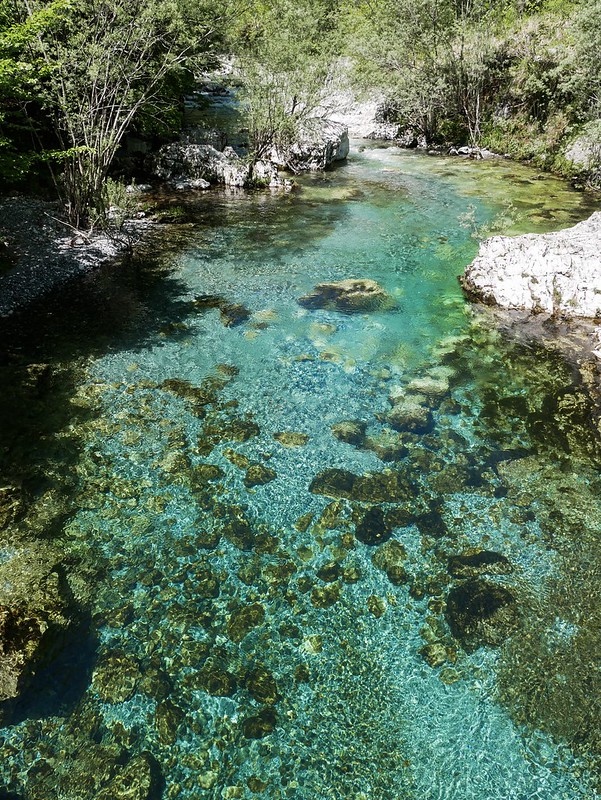 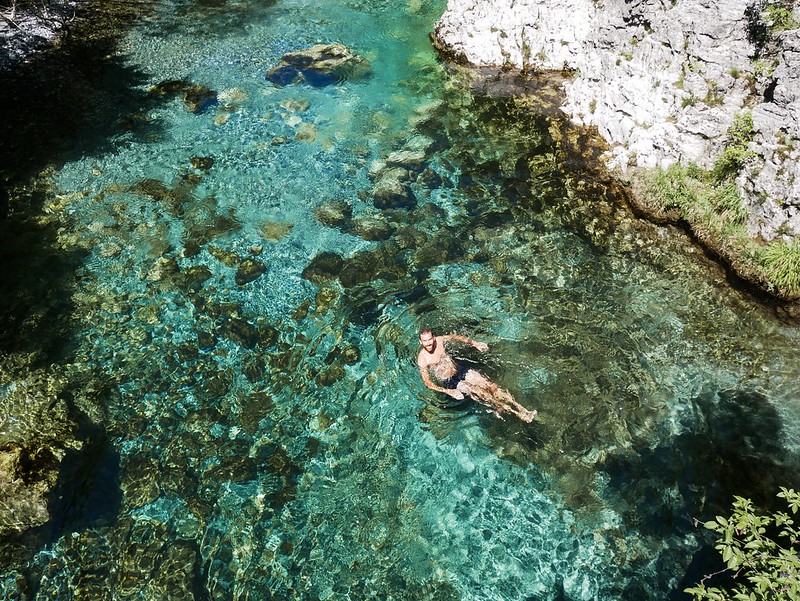 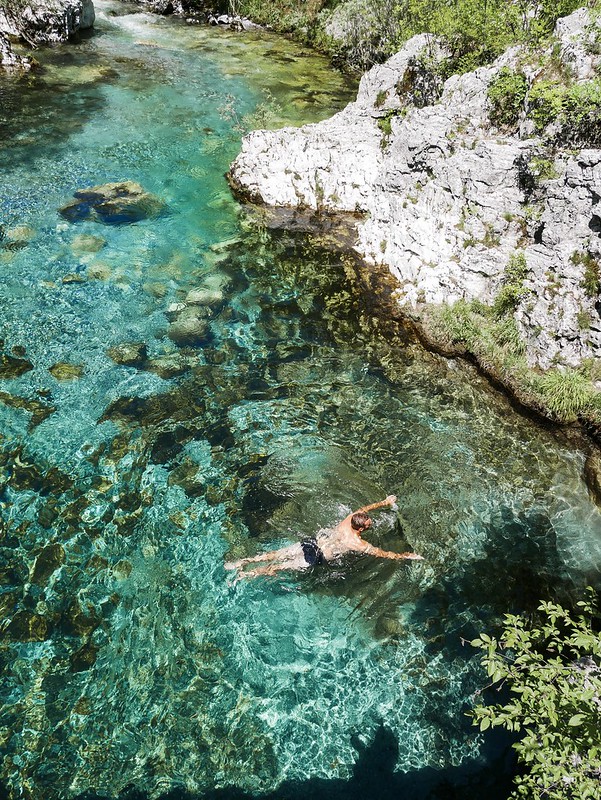 We then continued the route to the blue eye but we realised the left route led us to the wrong side of it. We didn’t get a high vantage point or a view of the waterfall so we had to walk back a chunk to find the other route. It was a bit of a wild trail, maybe we took the wrong path but we had to descend down steep ladders into the river bed, hop across rocks and then climb up a muddy bank. To be honest when we got to the blue eye we were a little disappointed. Due to the snowmelt the waterfall at the back was absolutely gushing and the pool was almost choppy like the sea. It was hard to appreciate the clarity of the water as it was moving so much and being churned by the waterfall so we didn’t even fancy a quick dunk in it. Maybe it looks better from a drone, or in the summer when the water is calmer but we weren’t very impressed so we decided to head back to our ‘wrong turn’ and have lunch beside the crystal clear river. 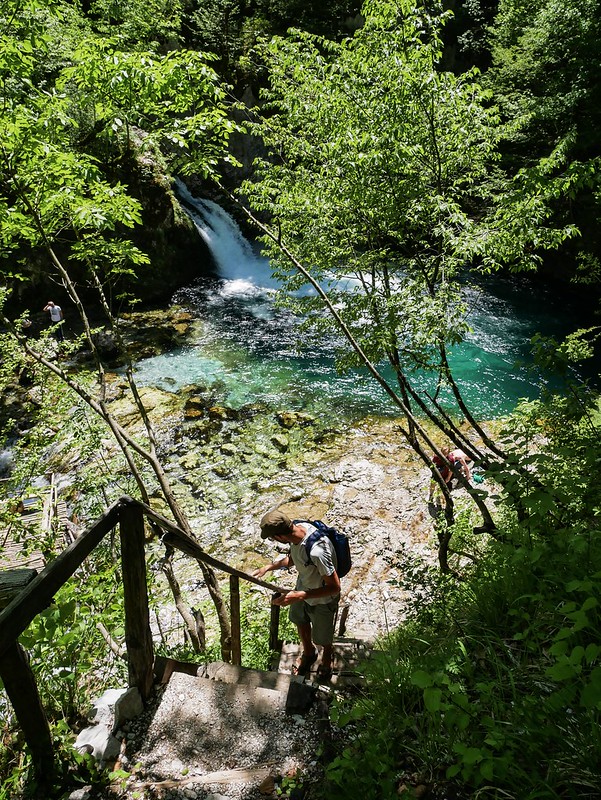 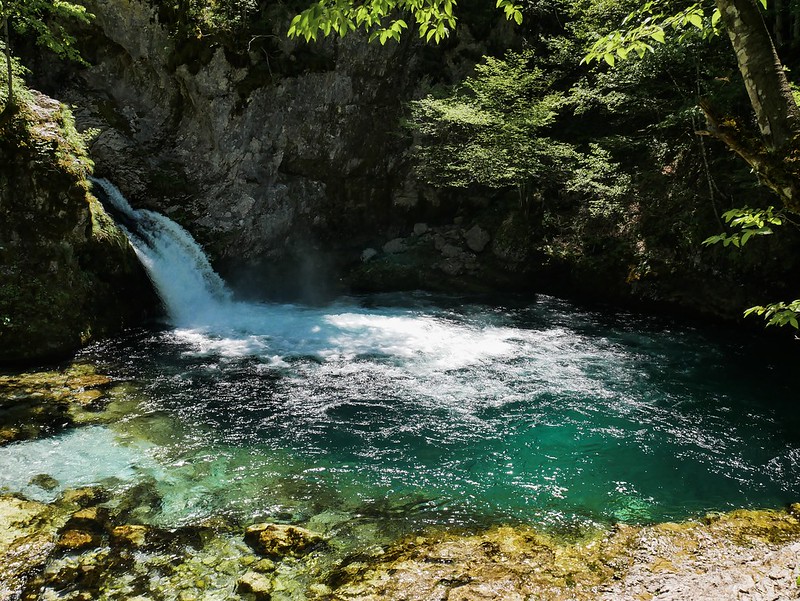 We braved another dip in the pristine water before making our way back to Theth. The walk seemed to go on forever, we were struggling with the stifling heat so at the next river crossing I went for another swim. We made sure to dip our hats in the river and splash our faces whenever we got the opportunity. We were both surprised how tough we were finding the hike to be honest, I don’t know if it was just down to the heat or because it was our 3rd long hike in a row. 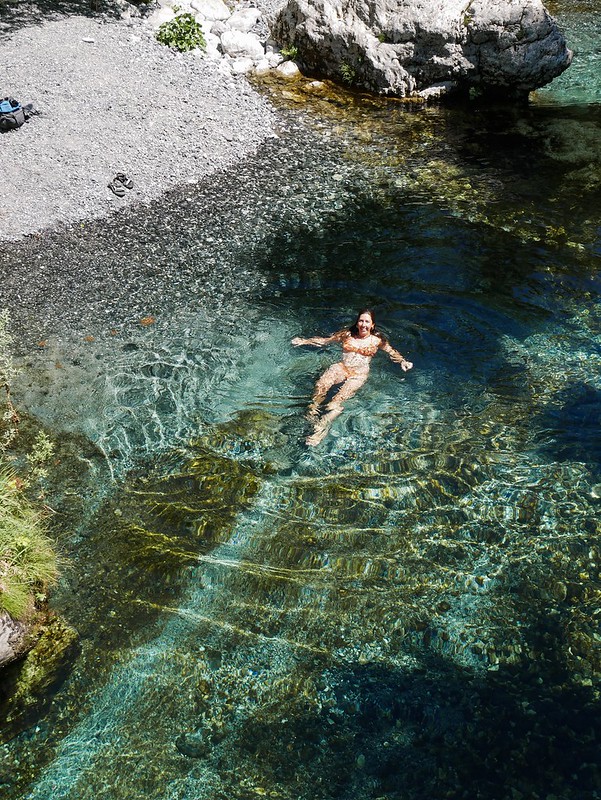 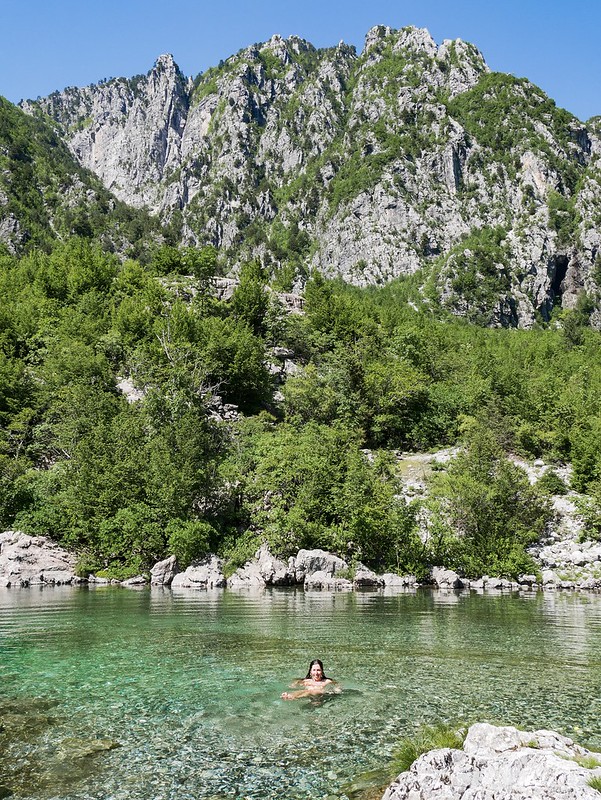 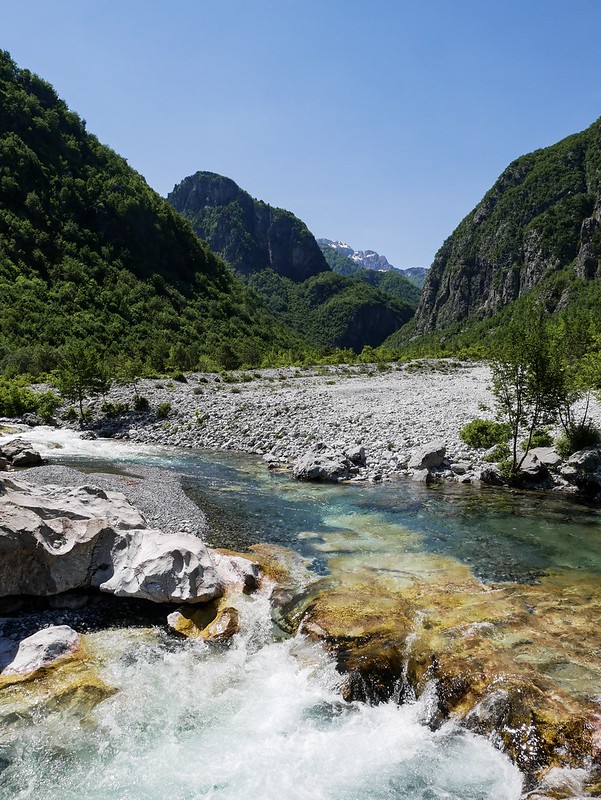 On the way back we pushed ourselves to get to the Grunas waterfall. It was an uphill climb and the only thing that got us through it was knowing we could swim in the pool below the falls. We were shocked when we arrived, there was a crowd of about 30 people!! It was so unexpected after not meeting anyone on the trail for a couple hours. Turns out there’s another route to the waterfall which we were planning to take back down and it’s the most popular hike from Theth. Not only that but it was the weekend so it was extra busy. While everyone else was struggling to get a photo through the crowd we had the whole right side to ourselves. We also had the most perfect rainbow shining bright across the waterfall and the spray coming from the falls soaked us sufficiently so we didn’t need a swim after all. We took our shoes off to cross the river and join onto the main path back to Theth. I think the hike took around 7 hours and when we returned we had to change guesthouses as ours was full for the night. 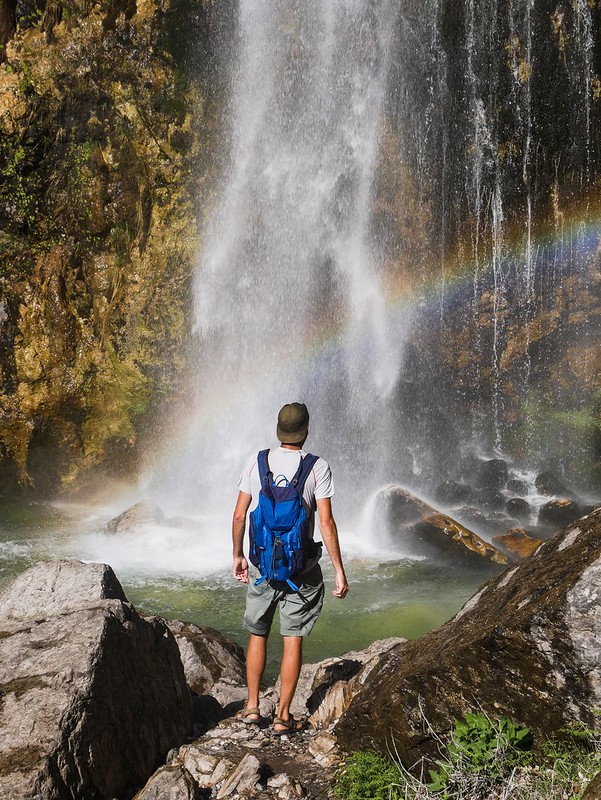 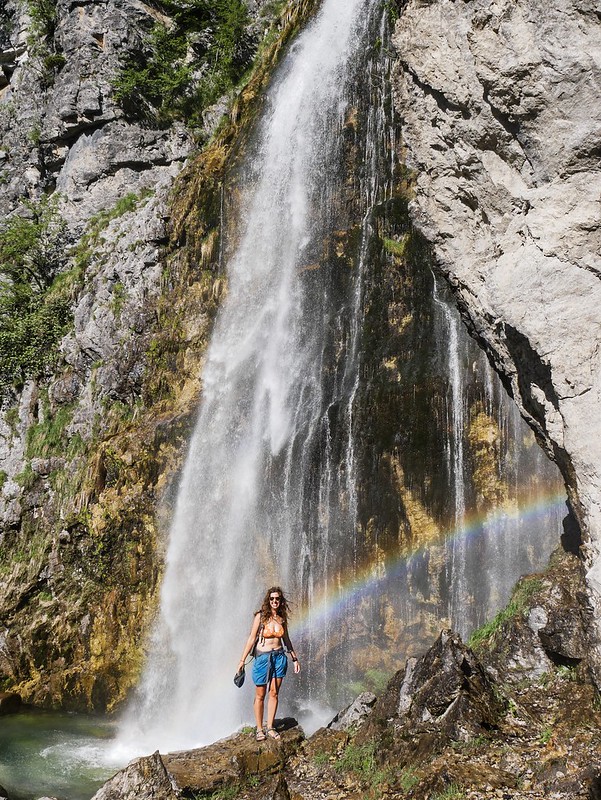 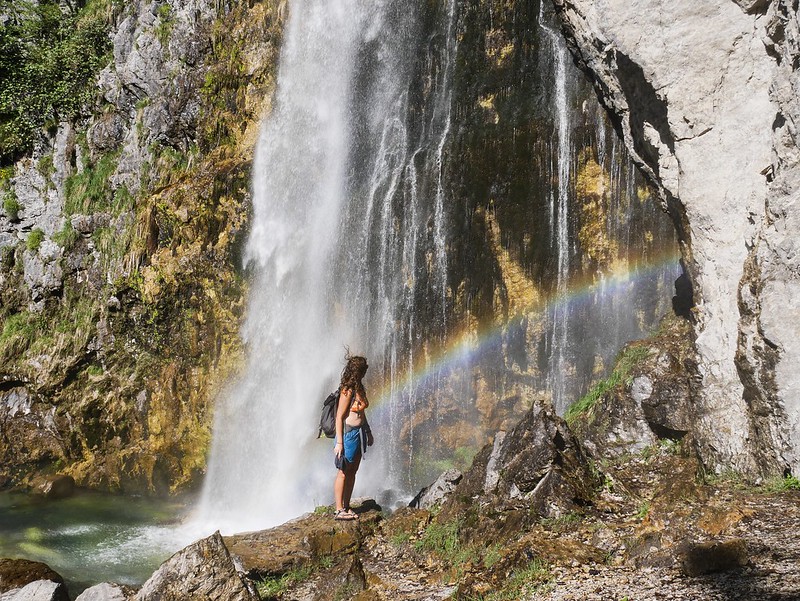 Luckily we just had to move next door so it was very convenient but boy was it a contrast. The first place we stayed was brand new, sparkling clean and modern but with a country vibe and probably one of our favourite guesthouses we’ve ever stayed in. For the exact same price we checked into a traditional stone building that had a rather ramshackle vibe. Our room was up in the attic, accessed by some a dodging ladder with a wobbly banister. The room was all made of wood and we had two small windows with an amazing view of the mountains but no curtains so absolutely no privacy. We had a shared bathroom which we were sharing with some rather squaller tourists. The guy left his tooth brush on the sink without a cover on it and oh my goodness I don’t think I’ve ever seen a tooth brush get so much use. There wasn’t a single bristle in the vertical position, they were all totally flattened to the sides. Our door didn’t have a key either and when we asked for one the lady said “some rooms don’t have them, but don’t worry no one will go in!” Feeling very reassured we headed back down the ladder where I nearly fell and broke my back.

Dinner was also a strange experience, we were squished onto a tiny table with 6 of us sharing all the food. We didn’t mind though, it was a nice change to socialise and see where everyone had been hiking today. We met some nice Germans and a lovely chap from England called Marin who was 85 years old and travelling on his own with a backpack that was too heavy for him to carry so he got a rental car to get around. He was missing both his little fingers which made his other fingers look strangely long like a lizards. As I was at the back of the table the food was all passed down from one person to the next so sweet Martin began passing a bowl of soup down towards me. The bowl was shaking in his hands so he gripped tighter as he passed it over, so tight that his thumbs were dipped inside my soup. Then he took a mouthful of food and began chocking, I don’t know what it is about old people but they seem to choke all the time and I didn’t know what to do. Should I tap him on his back or not make a big deal out of it and let him sort it out himself? I opted for the latter and thank god the chock subsided quickly because it really caught him by surprise at the beginning and I was in the firing line for getting it projected from his mouth into my face. It sent flashbacks of the time we lived with a boy who had special needs and he managed to cough his food across the table into my hair and face. I didn’t know whether to laugh or cry. We didn’t want to make him think that it was a funny thing to do or he’d purposely do it again but then I made eye contact with our friend and we all roared with laughter while I removed rice from my hair and tried not to gag. The dinner didn’t really fill me up and we were really rushed because it was such a small seating area and the old lady accepted too many guests so she needed to do a second sitting straight away.

Breakfast was just as disappointing and we couldn’t wait to check out and return to our favourite guesthouse next door. Before the room was available we went for a hike up to the mountain meadow of Fusha e Denellit. We didn’t want to do a long walk today because we were exhausted and the weather was due to be bad but it was better than predicted so we kept climbing up. We got some nice views of a flower filled meadow at the beginning of the walk and after that the hike just became steeper and less rewarding. The view at the end was nothing special when you consider how amazing the views are while sitting outside our guesthouse in Theth. Ironically we were most excited about hiking around Theth but the trails didn’t wow us and there was so much forest to walk through, which is of course lovely for the shade but totally lacks any views. Valbona turned out to offer much better day hikes with plenty of alpine pastures and dramatic views. 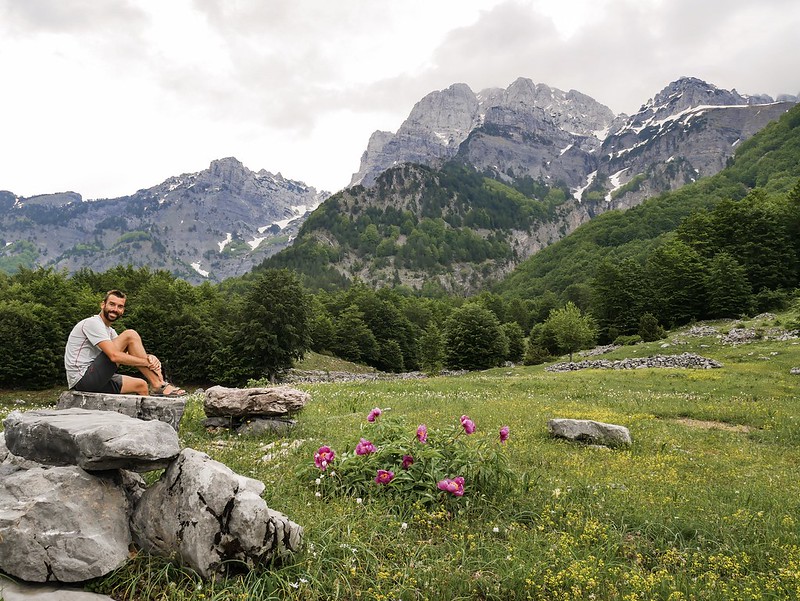 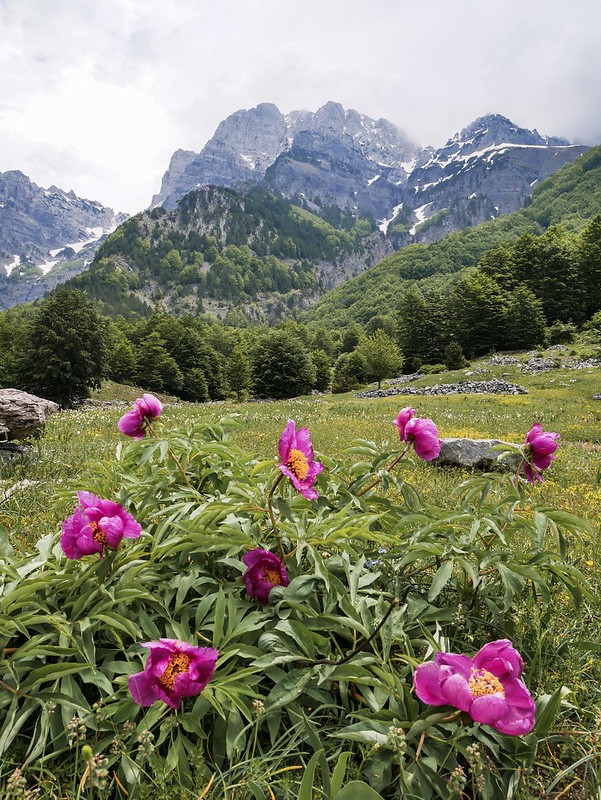 When we returned to our guesthouse the nice German couple we met last night walked over and offered us a ride in their rental car back to Shkoder tomorrow which is great news! 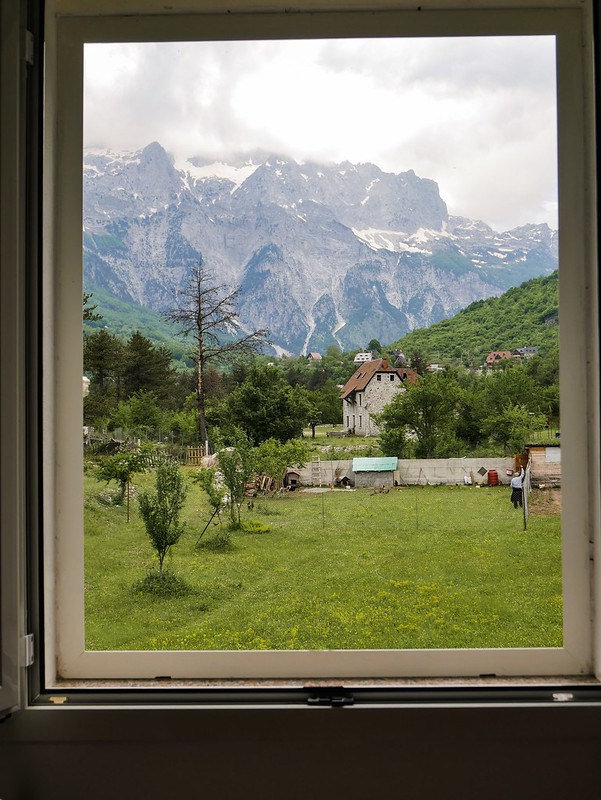 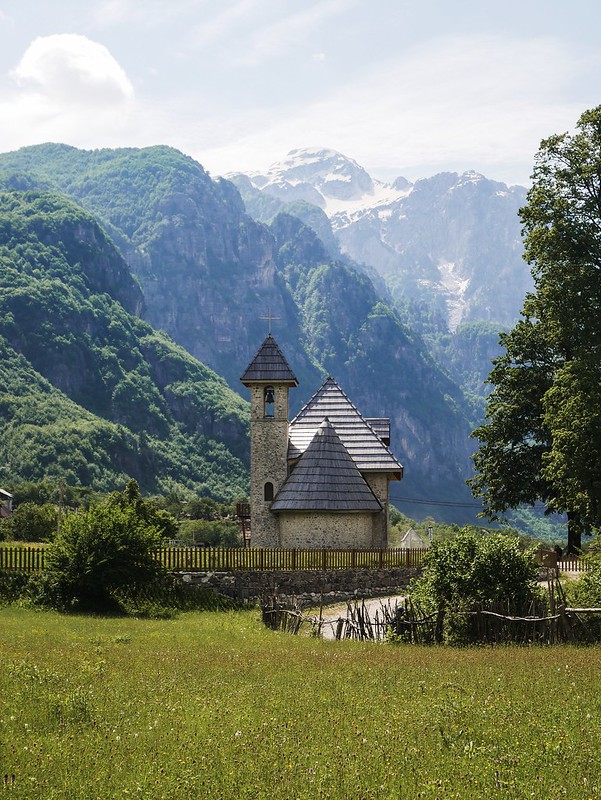 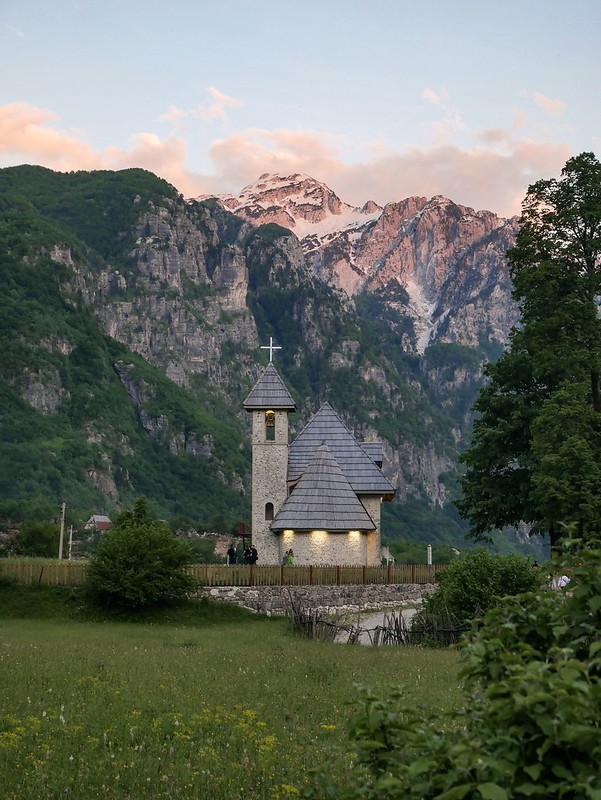