We were in awe of the Albanian alps so I researched other hikes in the area and discovered a little village called Lepushe. Getting there was challenging as we discovered the one van heading there was cancelled due to a catholic holiday. The host of the guesthouse we were planning on staying at happened to be in Shkoder where we were and said he could take us to Lepushe for free so we hoped into his big pickup truck. It was a very rushed decision and meant we had to sacrifice our hotel in Shkoder that we’d booked but we saved money on the transport so we were happy. Pablo our host has to make this drive to Shkoder twice a week to stock up on supplies for his restaurant and it takes him from 10am until 7pm!

It was a really wild route and once we reached a high point the road headed straight down to the bottom of a valley via a series of hairpin bends. It’s considered to be one of the best mountain roads in the world and I can imagine motorbikes loving it. It was very safe too with an extra high barrier which did a great job of blocking my view. It took about 3 hours to reach Lepushe and we were shattered. After a hot shower we headed into the stone restaurant where there was a roaring fire. The food was pretty disappointing though, the bread was stale leftovers and the chef didn’t know what salt was so the food was very bland. Luckily there were chips and tzatziki so I was very happy to eat them. For breakfast we were shockingly served the same old bread so we left it all to make a point and just ate the homemade doughnuts with some delicious blueberry jam. Anyway, we came here to hike and there was one particular trail I had in mind: Maja y Vajushes, also known as Talijanka. It’s a mountain that sits at 2057m and thanks to Lepushe’s location it was just a 10km return hike. 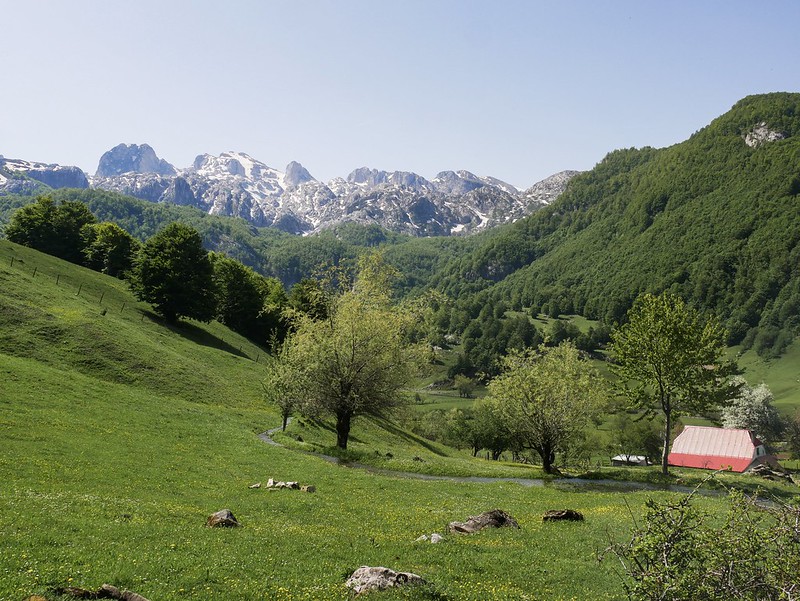 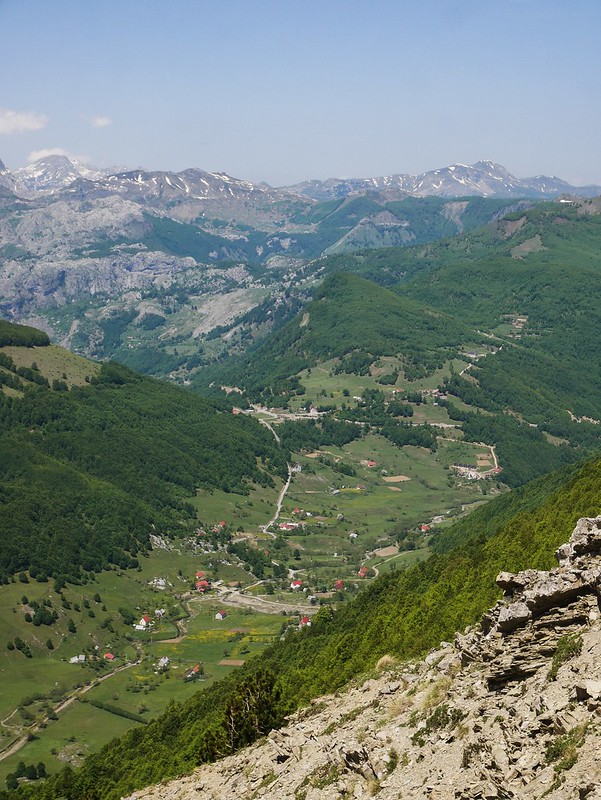 We climbed up through dense forest and eventually arrived on a plateau encircled by lush green hills and patches of snow. We opted to make our way up via a ridge-line but we soon came to a grinding halt. The ridge narrowed into a rocky ledge and the alternative around it was a gully of snow. When we checked our map we realised we weren’t actually on a trail anymore. We bumped into a couple of Germans who we’d seen come down from the mountain the proper route but they said they had big problems with the snow and had to turn back and that’s why they were on the ridge with us. Hmm, that didn’t sound good. 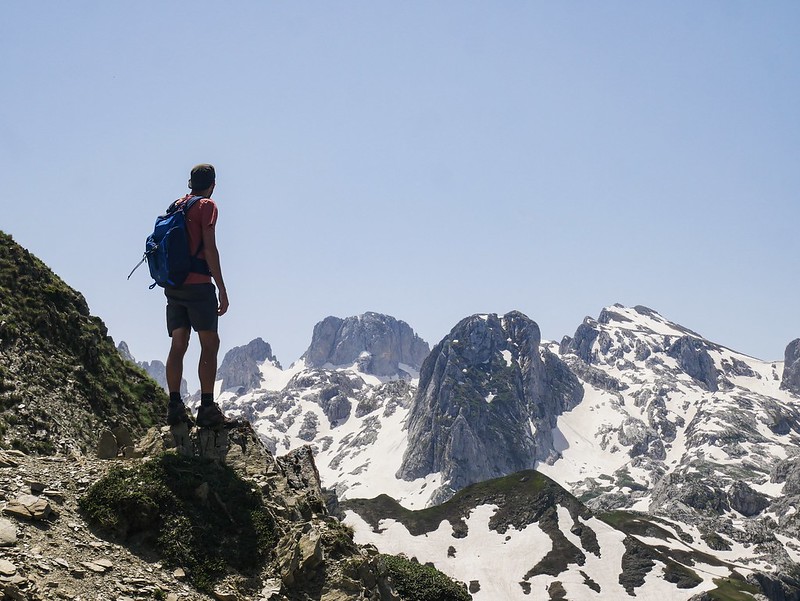 We scratched our heads for awhile and accessed our surroundings. In the end we opted to head back down onto the plateau and climb up an extremely steep but snow-free section straight up to top. We definitely wanted to avoid the snow as it was covering streams so if it collapsed we could fall a couple of feet down. Luckily our steep path worked out and we reached the grassy ridge that marked the border between Albania and Montenegro. That’s when we began to get a view of the mountains – the Karanfil massif in particular which rose up in a series of black daggers. 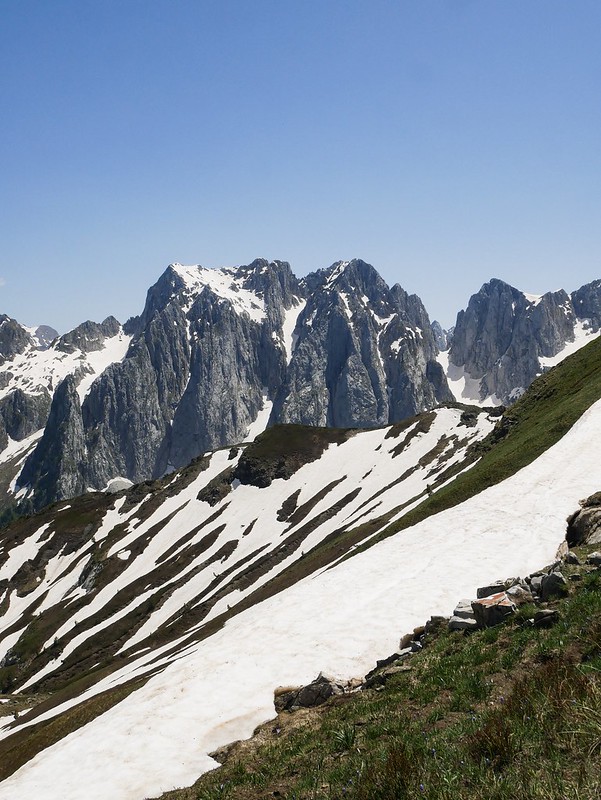 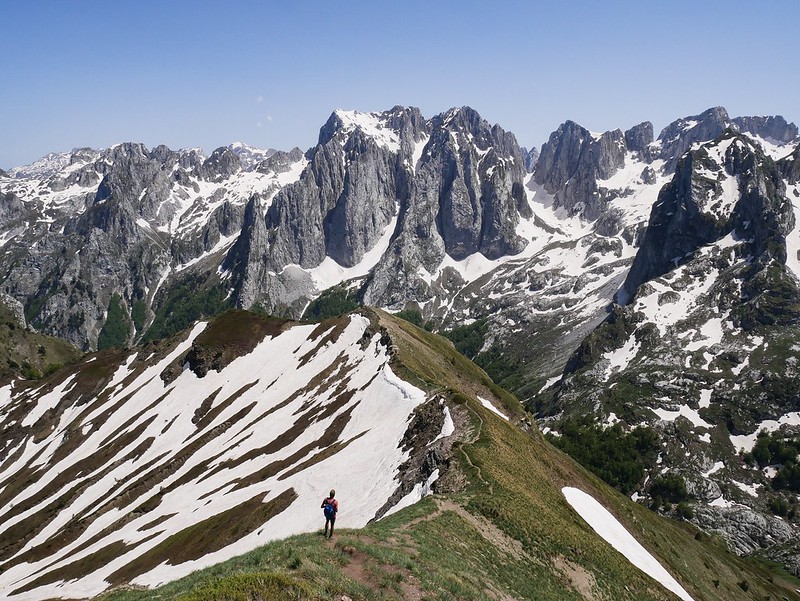 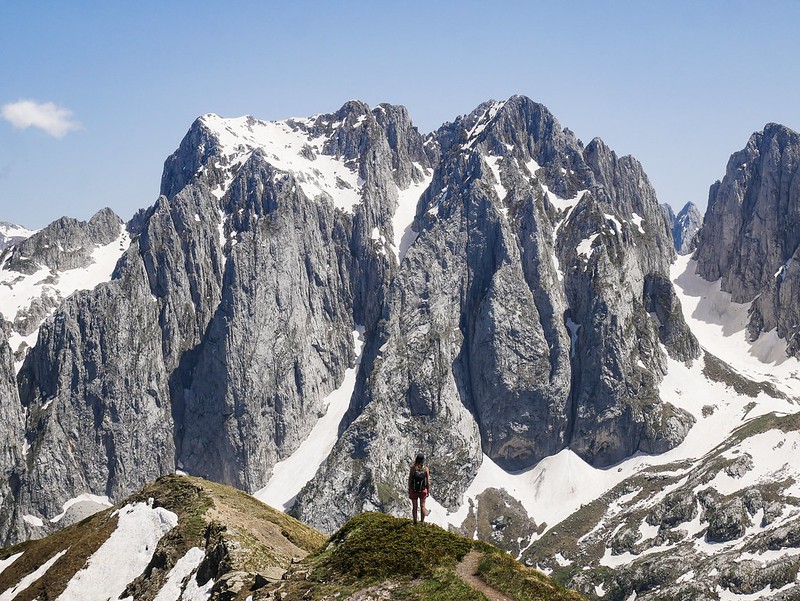 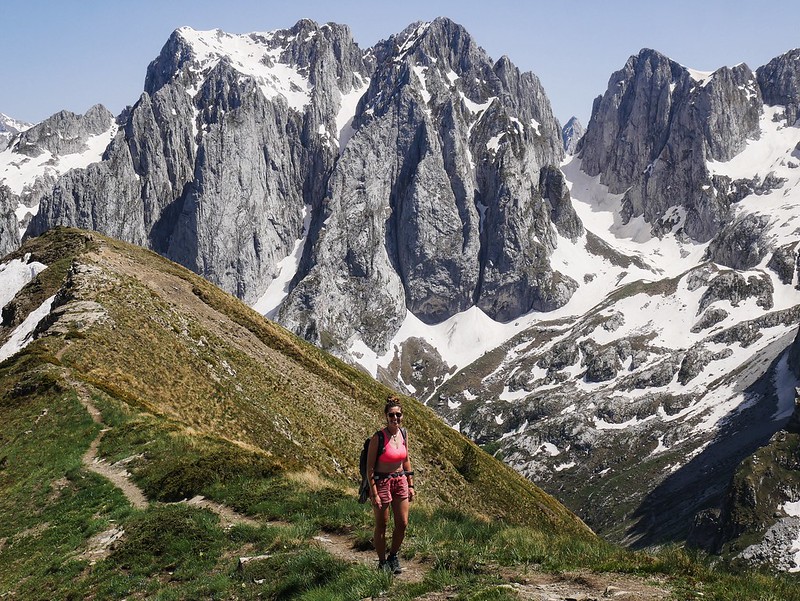 The peaks were as beautiful as I’d hoped and looked so vertical that they’d be more suited to rock climbers than hikers. The path continued down a steep grassy hillside into Montenegro and we decided to just take a cheeky little stroll across the border to get a closer look at the mountains. As we stood there and looked at the view around us we realised no other hike in this area will compare to the summit of Talijanka. We were feeling pretty exhausted after hiking mountains for the past 5 days so we were happy to leave the area the next day. 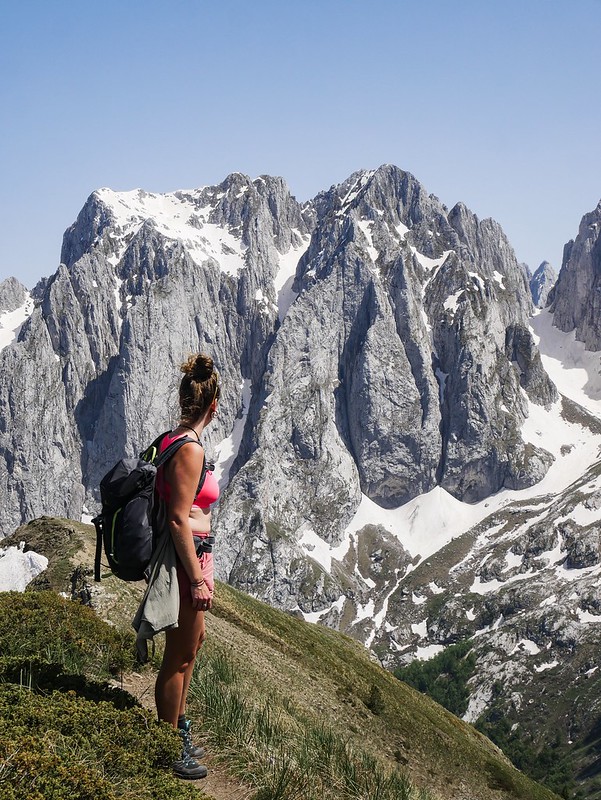 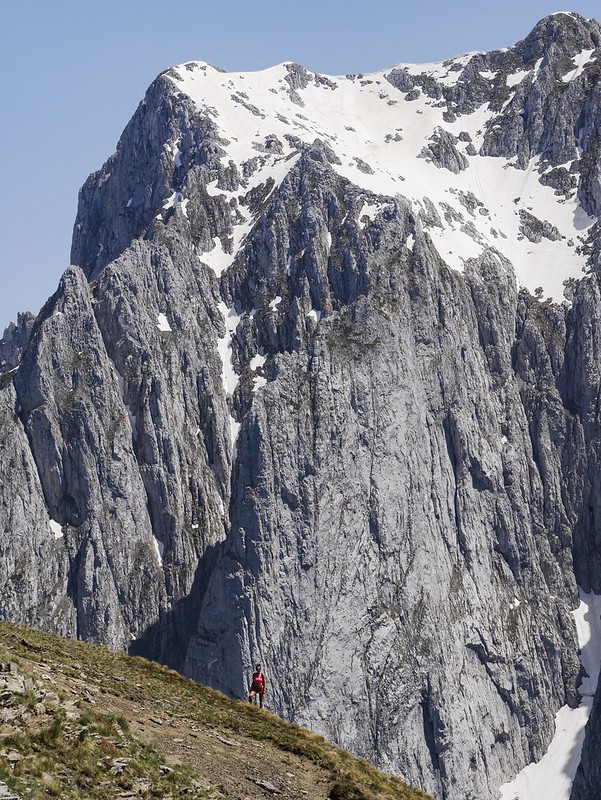 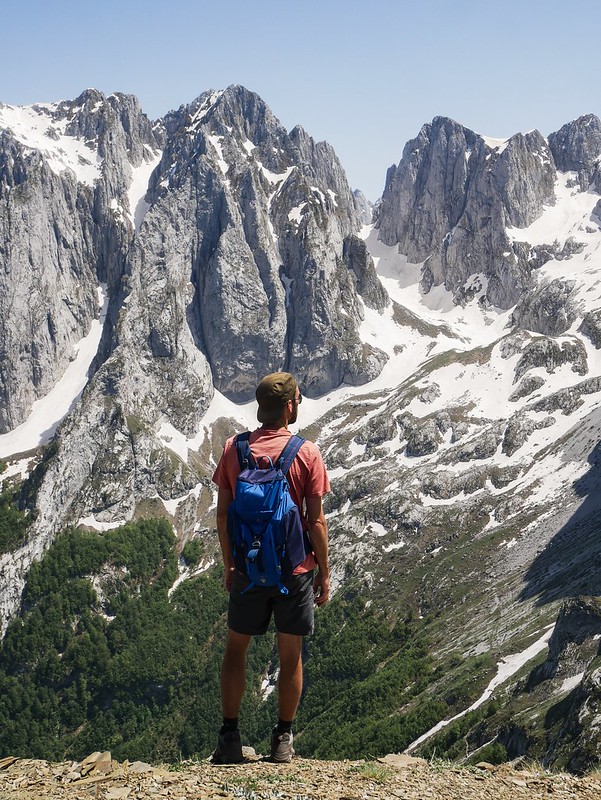 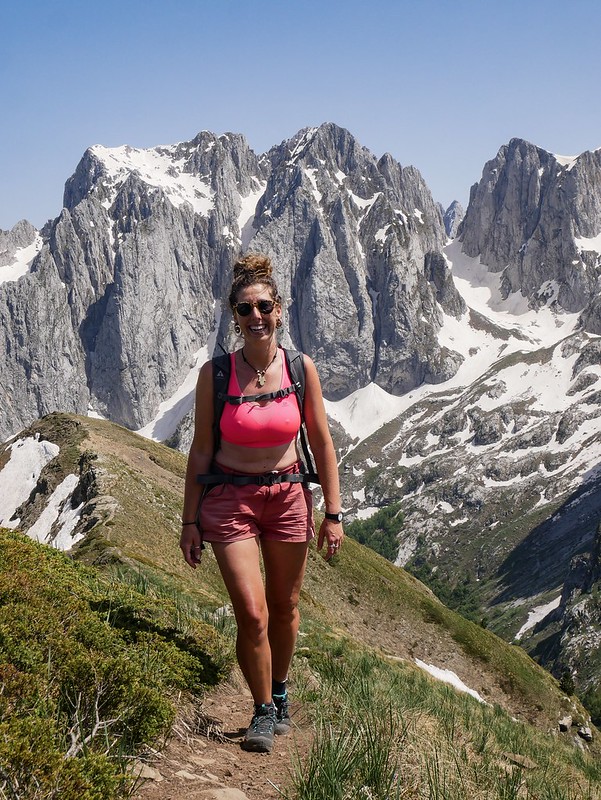 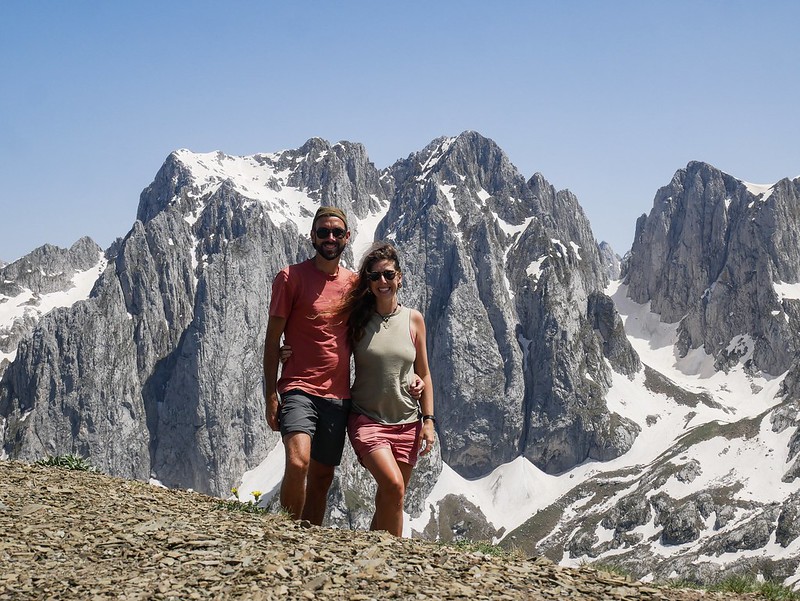 To get out of Lepushe involved a bit of planning and luck. There’s only one minivan service per day and our host said it would be passing the main road at 6:30am. We had a steep walk up the road and just as we had 50m to go the van pulled up and the driver began waving his arm, telling us to hurry up…which wasn’t going to happen with 20 kilos on my back. The minivan was almost empty and the driver sped through the valley and between the deep rocky walls of the gorge until we reached the main village of the area and stopped at a coffee shop for a well needed macchiato. Our plan for today was to travel from the Albanian mountains to the Montenegrin coast and we had no idea how long it would take us. 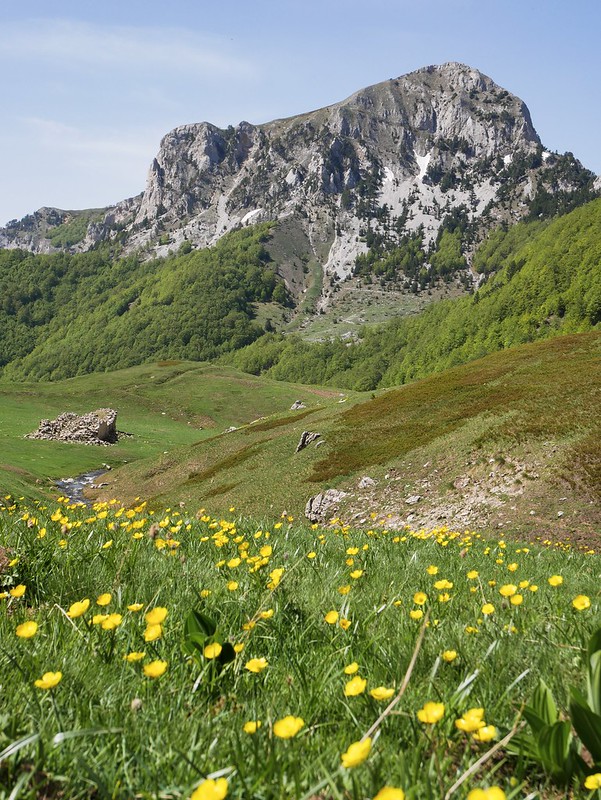 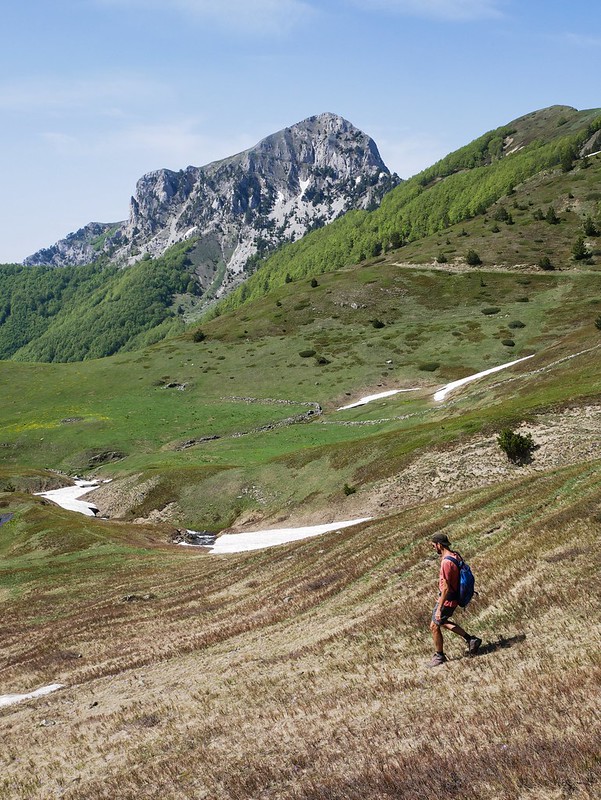 The minivan all went very smoothly and took about 2 hours so at 8:30am we were dropped off at a junction 2km from the Montenegrin border. We figured we’d walk to the border and then try to flag down a bus or hitchhike to Podgorica, the capital about 25km away. Just as we got out the bus and began to try and cross the road a car pulled over. It was a couple of Albanian men offering us a ride! Wow we weren’t even on the right so of the road or sticking our thumb out so we ran over and asked how far they were driving. Turns out they were also heading to Podgorica. The driver didn’t really speak English but seemed to ask how much we could pay. We’d almost spent all of our leke on the bus but luckily we had about €4 in coins and he was very happy to accept that. The passenger was drinking a can of beer at 8:30am and even continued to do so as we crossed through the border. Not only did we get a ride instantly but our lovely driver even dropped us off at the bus station. The next bus to Herceg Novi was in 15 minutes so we barely had to wait at all and to be quite honest we couldn’t believe how smooth our day was going.

Instead of staying in Herceg Novi we opted for Meljine, a few kilometres along the coast as we found a cheap apartment very close to the beach and food shops. It turned out to be a great choice as Herceg Novi was extremely hilly so reaching the beach would of been a sweaty task whereas we just had a mostly flat 200m stroll to the clear sea.

We decided to spend one day like beached whales, washed up on the pebbly shoreline and enjoying some down time and another day walking 12km all the way along the coastal promenade to Igalo beach where I’d read there was healing mud. On the way we stopped in the old town which was exhausting to explore in the heat so we were very happy to discover a lovely little beach where we stopped for a swim. All of the beaches are pebbly but they were pale stones so it made the sea look extra clear and twinkly. 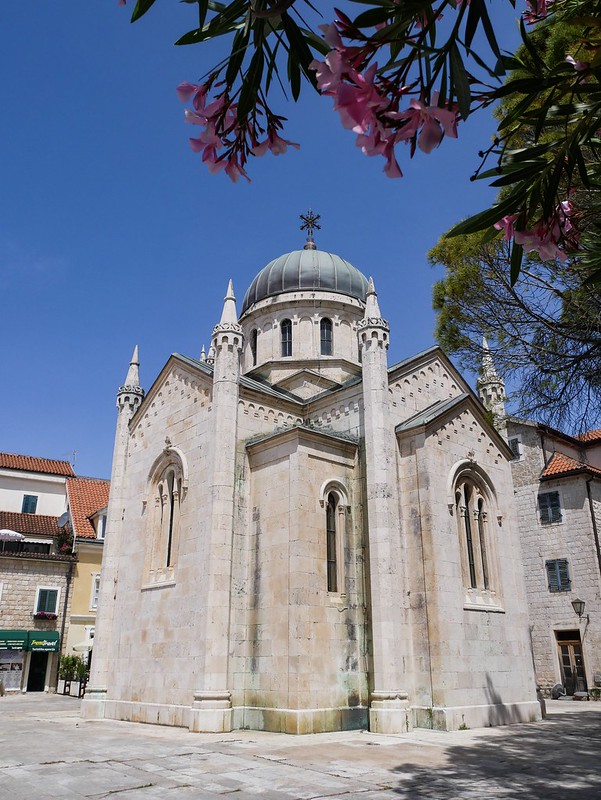 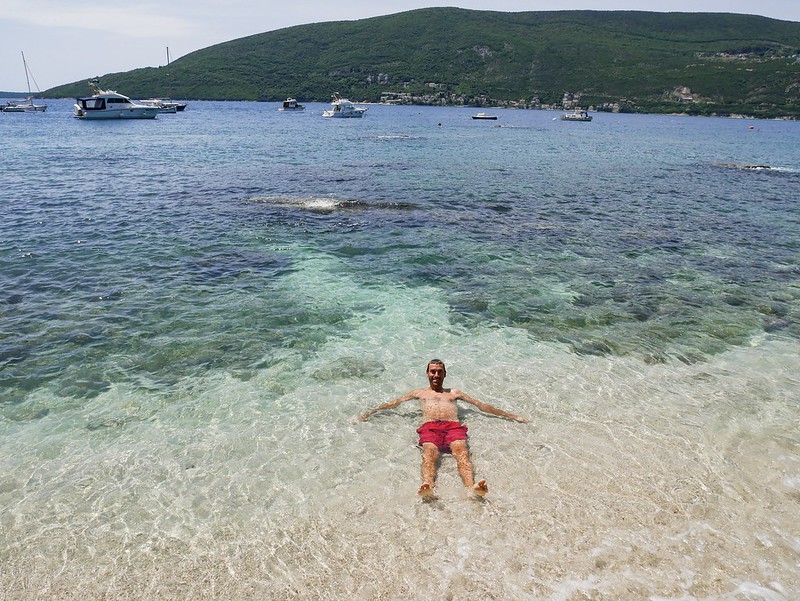 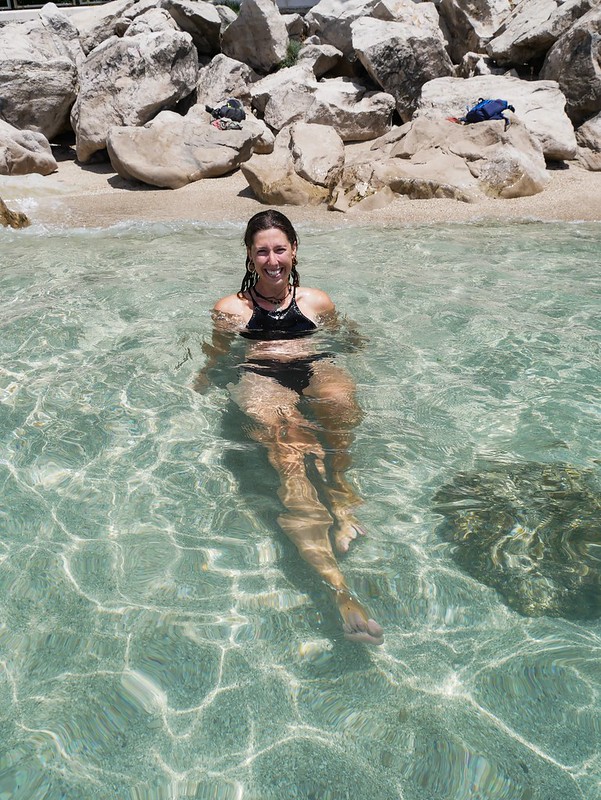 We walked all the way to the far end of Igalo beach and didn’t see anyone covering themselves in mud which was strange. The beach wasn’t very nice here as it had brown sand and the sea was so shallow, people were walking 200m into the sea and barely getting their ankles wet. We reached the end of the beach and decided to head into the water in the hope that we’d feel mud under our feet. It was bizarrely warm and murky water so we stuck our hand down and grabbed some of the sandy floor which definitely had a hint of mud in it so we began rubbing it on our bodies. Craig found an even muddier patch by the shore which was almost black. We got some suspicious whiffs of sewage as we slapped it on our bodies and had to hope it was the smell of healing minerals and not poop. Who knows what we covered ourselves in but our skin felt lovely and smooth afterwards. 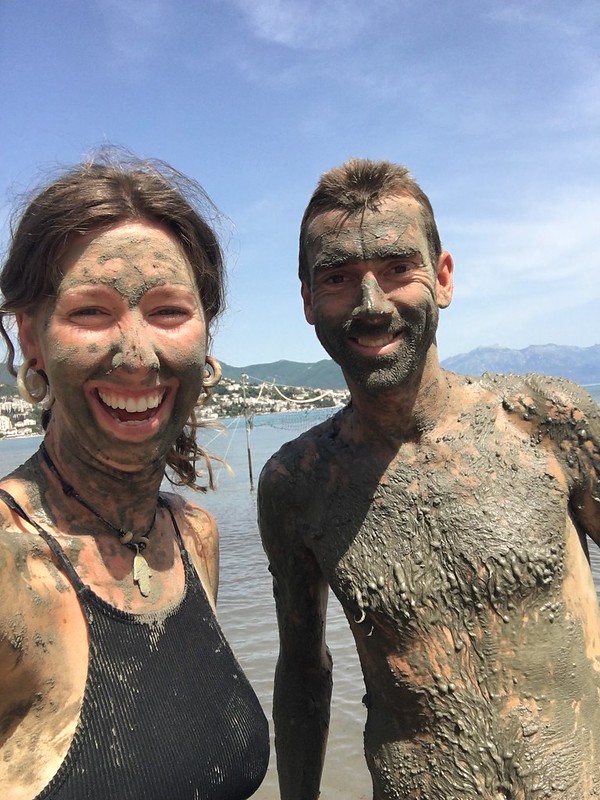