Snow lingers on the Albanian alps well into June and after doing lots of research I discovered the pass between Valbona and Theth was actually closed in early May when we planned to hike it. I spent a lot of time emailing guesthouses, tourist offices and Balkan Facebook groups trying to get information on when we could hike the route. So we spent some time in Montenegro until I received a message saying “good news, the pass is now open…but only with a guide”. For us that was good and bad news, we hate hiking with a guide or in a group but we really wanted to hike this route. So then I began contacting people for prices and it was between €50 and €90 for a guide for the two of us. If we found a few more people who wanted to hike on the same day we would be able to split the cost with them.

We enquired in many hostels around Shkoder about hiking the route and we got such mixed responses. Some said the route is still closed, others confirmed it’s possible with a guide but we were also told to not even bother going to Valbona and just do some hikes around Theth instead. We didn’t like the sound of that, the journey to Valbona is part of the highlight of this loop trip as it takes us on a scenic ferry ride across Koman Lake. In the end we decided to go for it, I had a contact who could provide us with a guide for €50 and every hostel or hotel in Shkoder can arrange transport to Valbona. It cost €20 and consisted of a 2 hour minivan ride to Koman, a 3 hour ferry across Koman lake and a 1.5 hour minivan ride from Fierzë to Valbona.

We spent two nights in Valbona and did a fantastic hike to the Montenegrin border which you can read about in my previous post and we used our afternoons to get more information about the conditions of the pass. I was absolutely amazed to meet tourists who hadn’t done an ounce of research. Some said “yeah we’re heading up the pass tomorrow, I read it’s all marked so we’ll be fine”. They had no idea that the summer route was too dangerous to hike until mid June and that the locals take you up an alternative ‘winter route’. On the contrary some guesthouses in Valbona warned guests against doing the hike even with a guide! Just a week ago a Swiss tourist died while hiking the summer route and falling 30 meters. So with that being said we were ready to book a guide for our safety. But just before we did we were lucky to meet a couple of girls from Ukraine and Chile who arrived at our homestay after hiking the pass the opposite direction and they gave us invaluable information.

They too didn’t know about the winter route and ended up on a terrifying steep slope of snow that became too dangerous to continue on. As they retreated they met someone who pointed the winter route out. They were able to give us a good description of the route and said because we’re experienced hikers we should be fine attempting it without a guide. So then it was decided, first thing tomorrow morning we’d hike the pass. We actually got a text before we left from a Spanish guy we befriended who hiked up the pass with a guide the day before and he told us “you need a guide!!” So we began to brick it a little but we had to remember he’s not a regular hiker like us and he also hadn’t done any research about the route or what to expect. I had numerous different maps to help us find the way as we knew the route wouldn’t be marked.

If you are not an experienced hiker or confident at route planning, map reading or hiking in snow/dangerous conditions then DO NOT ATTEMPT TO HIKE THIS ROUTE WITHOUT A GUIDE. Otherwise you can come back around mid June when locals say most of the snow should be melted and the summer route will be doable.

It’s always wise to remember this simple rule – don’t climb up or down something that you can’t get back up or down. It sounds simple but we hiked some wild routes in Scotland and had to really be thoughtful about each move because if we committed to one that was too challenging then there would be no turning back.

So the route instructions are as follows:

You follow the normal route from Valbona to Theth which is on the Maps.me app. After about 8km of hiking you will reach ‘Simoni Cafe’ where there’s a big stream flowing down the hillside. Continue on the track and after 250m you have to turn left and walk between some trees and then the view will open up as you stand in a wide, dry riverbed covered in snow or rocks depending on the time of year. The river bed splits on the map and you should follow the one uphill in the rough direction of the ‘natural shelter’ marked on the map. The river bed quickly changed from a pile of rocks to a sheet of snow. We were able to follow footprints at times but as the snow is melting there were many rocky areas beside the riverbed to walk along where it became hard to know the route without visible footprints. 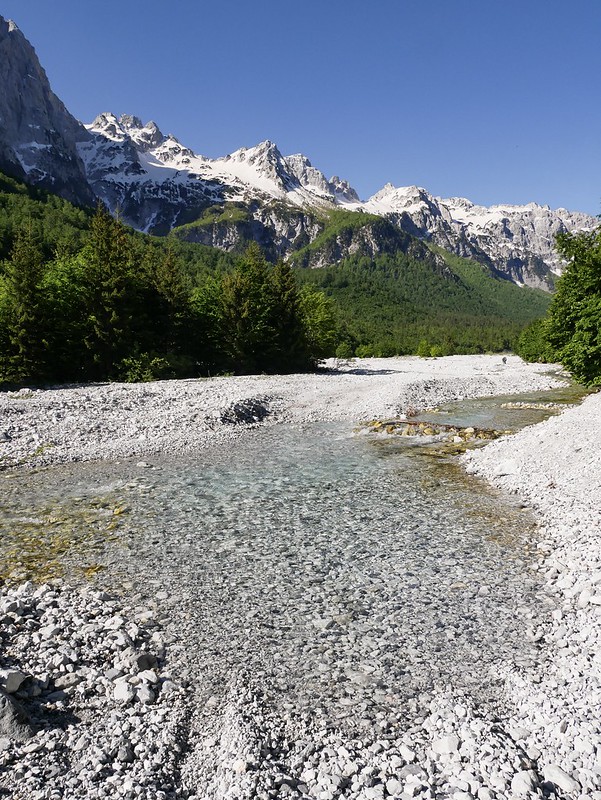 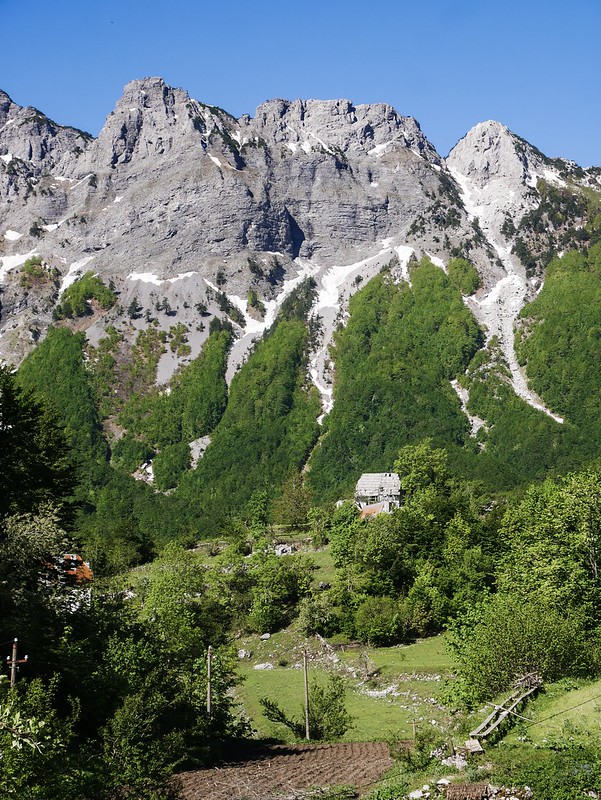 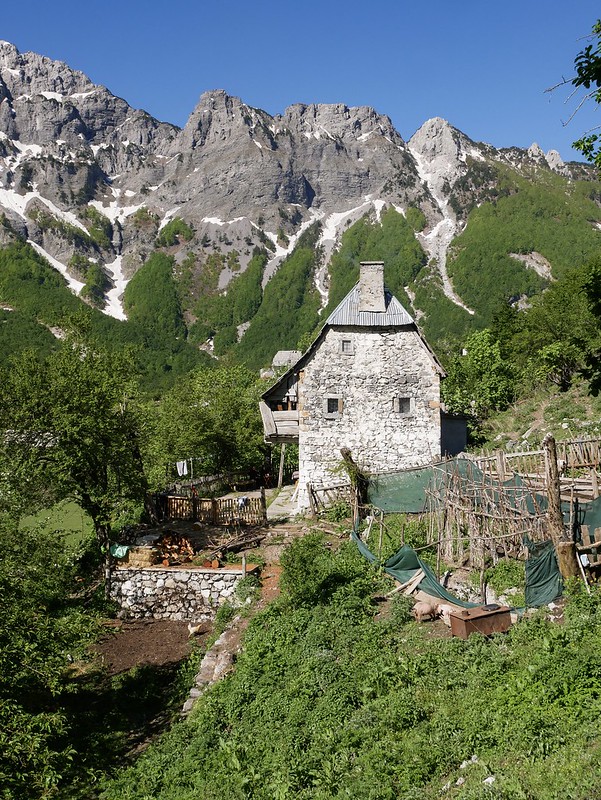 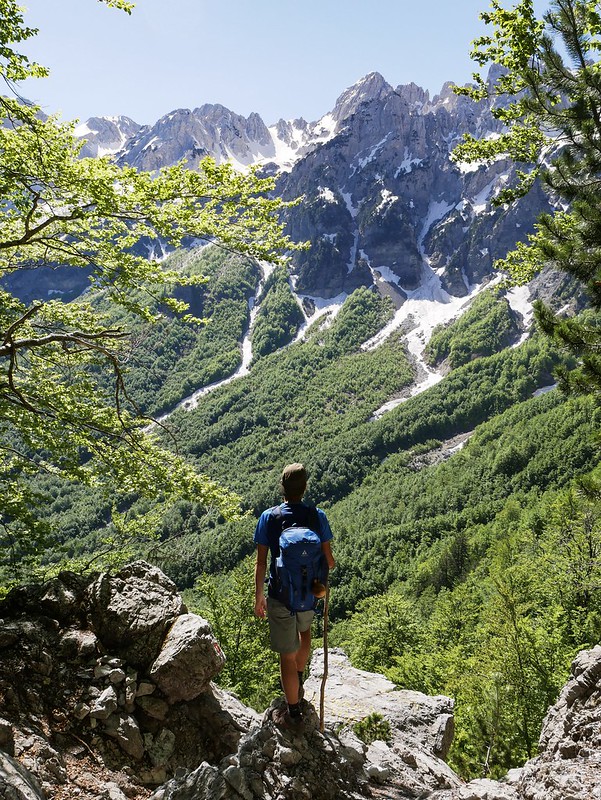 We were actually very lucky as we happened to have a guide with two tourists ahead of us so we were able to follow their route the entire way. Without them it would of taken a lot longer to figure out the right way and would probably involve quite a lot of backtracking. There were a couple of quite dangerous sections where we had to cross the snowy slope by stepping into previous foot-holes. One slip and we’d be sliding down the mountain so it was a little unnerving but we picked up some strong sticks in the woods and they gave us a lot of confidence walking along the steep sections. 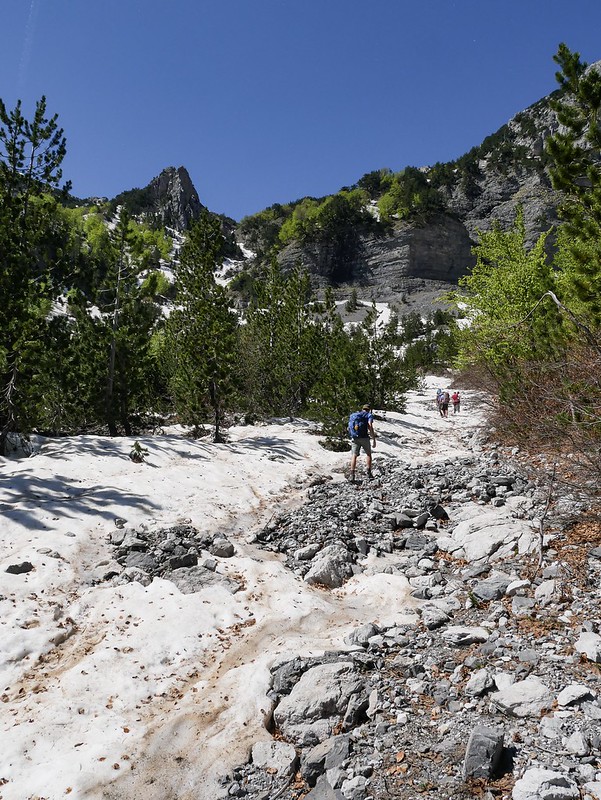 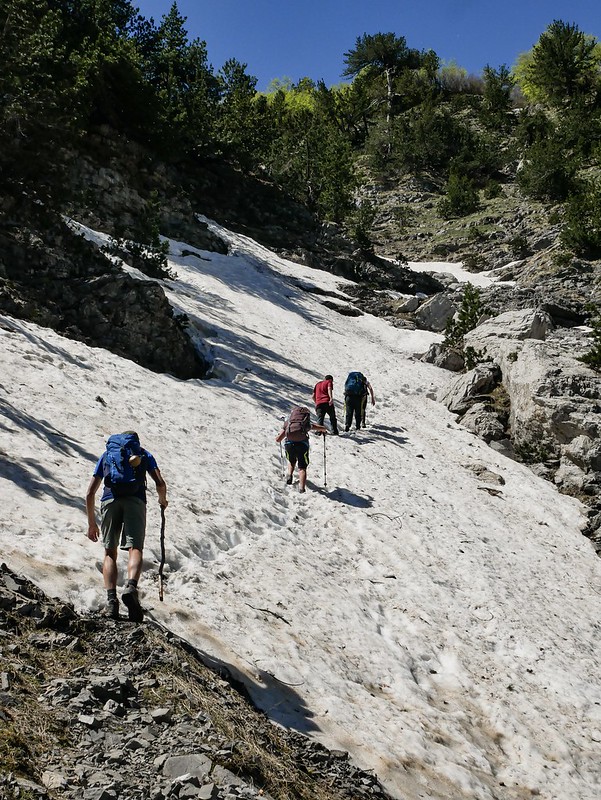 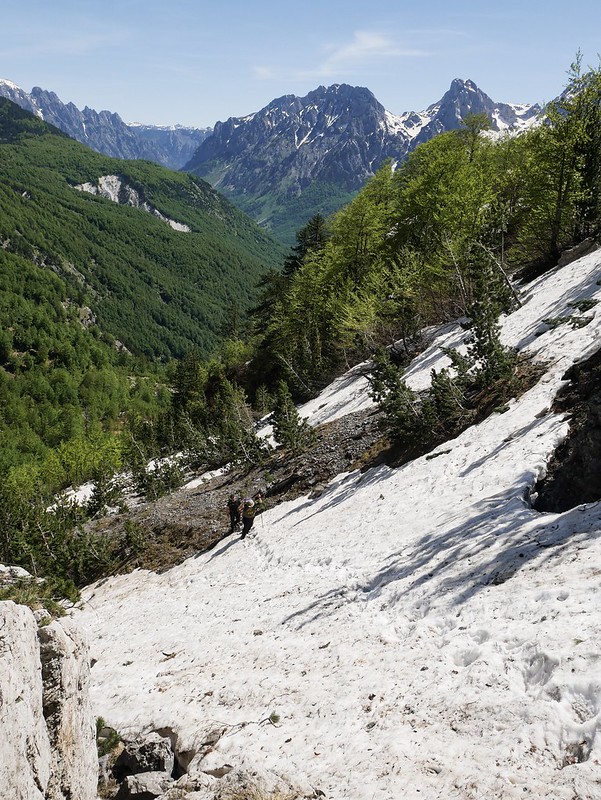 We then climbed up a series of sort of rocky terraces towards the right of the riverbed and had one more large section of steep snow that you do not want to slip down before we arrived on the main trail, just 170m away from the pass. It took us 3 hours to reach from Valbona however a very kind local gave us a ride in his van for 3km so it would probably take nearer 4 hours to hike the full route. 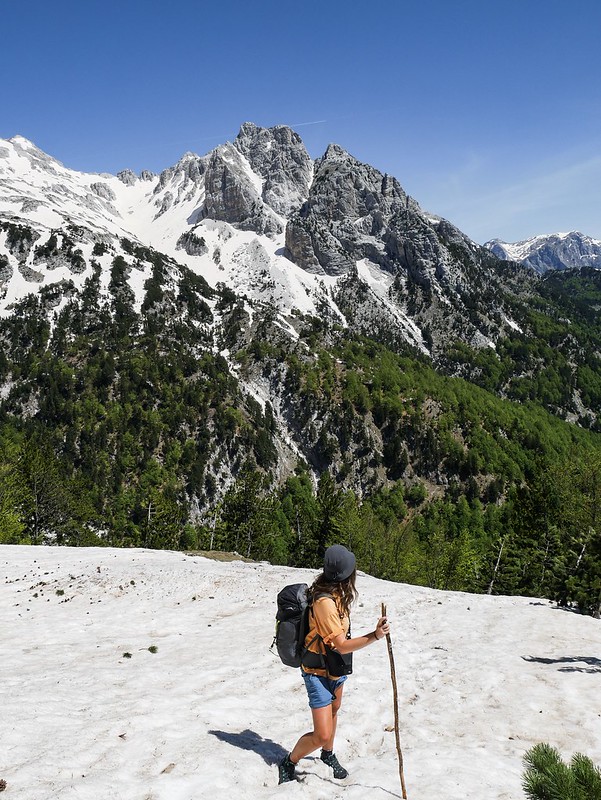 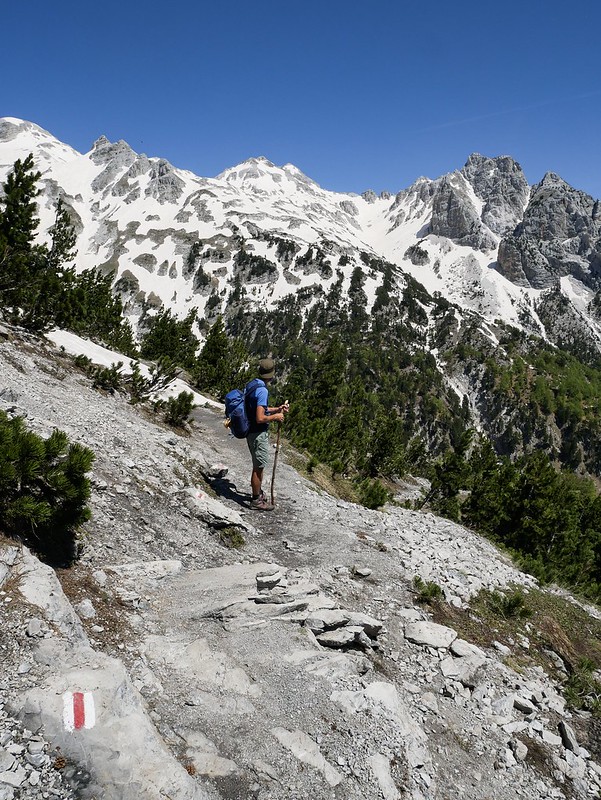 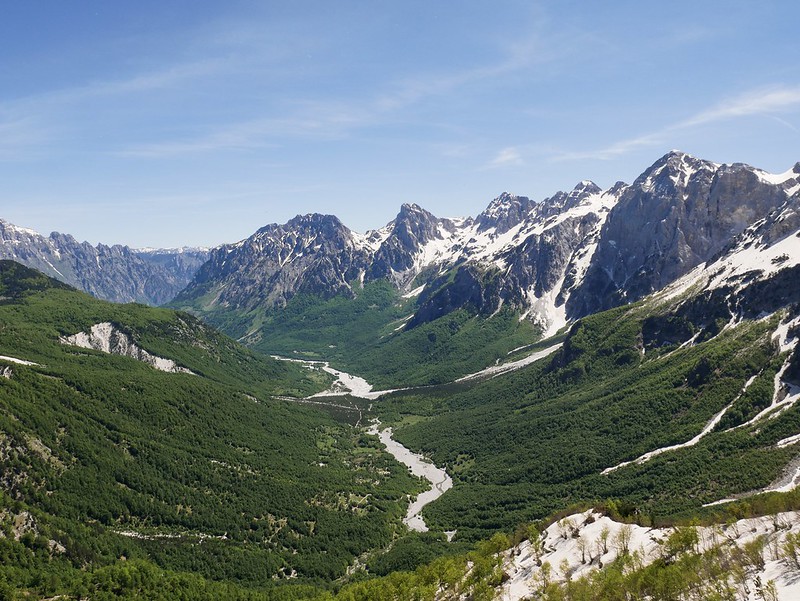 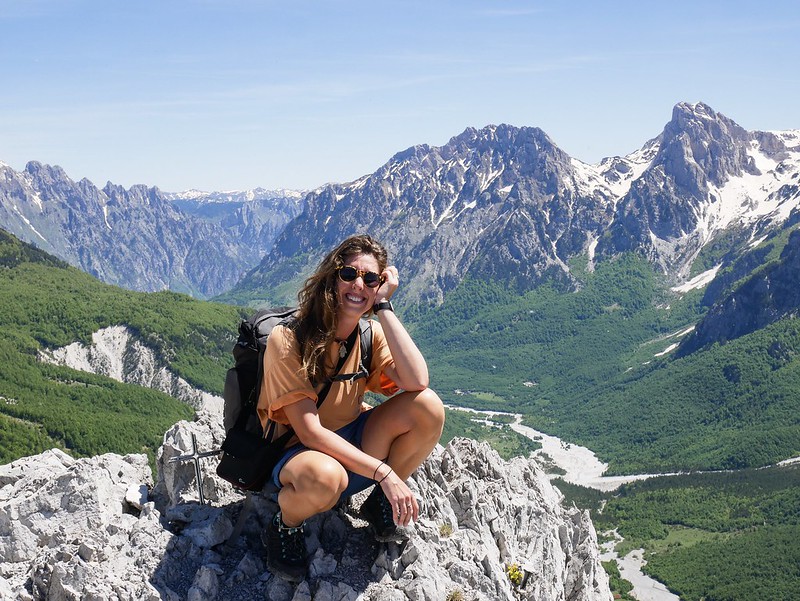 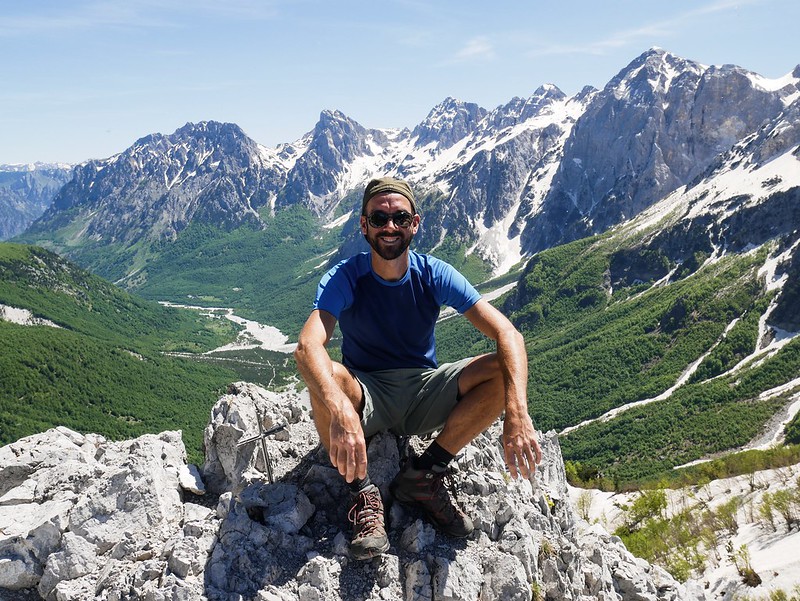 From the pass we could see the Theth side was lush and green while the Valbona side was wild and covered in snow. We hiked a little further up a rocky hill to get the best view of the valley and boy was it impressive. The view was spectacular and we were blessed with crisp blue skies and endless mountain views. It was a truly wild area of Europe and felt so untouched. In fact we’re pretty sure we passed a bear scat through a wooded section on the Valbona side. We’ve seen a lot of bear poop in North America and this one looked so similar as it was black in colour with no hay in it (otherwise that would suggest it was from a donkey or horse). 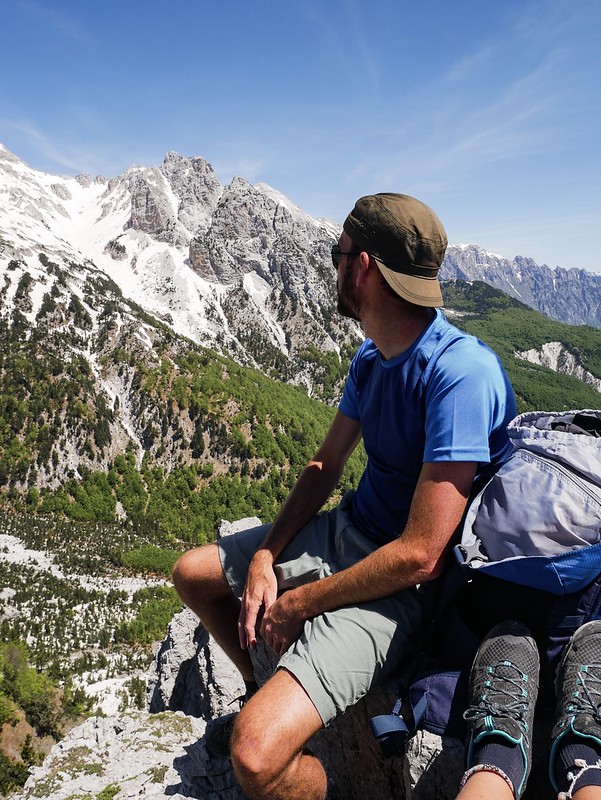 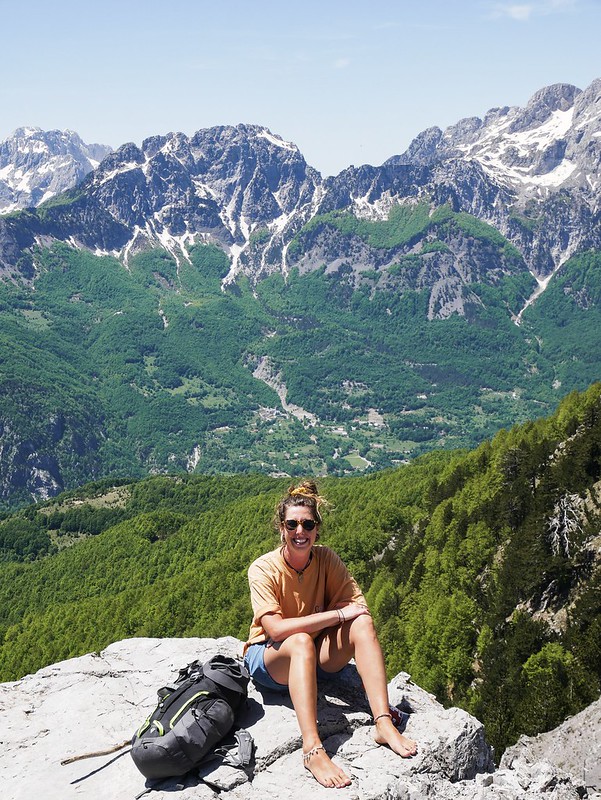 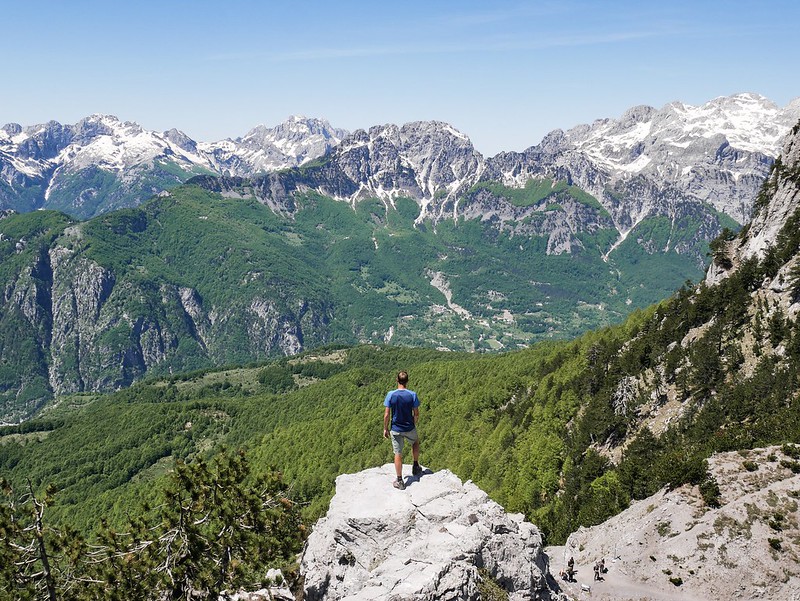 We soaked in the view for two whole hours but it wasn’t all relaxing, as we sat atop the rocky ledge we watched people arrive at the pass and continue hiking along the summer route towards Valbona. We had to shout across the valley “WRONG WAY!!” which was a challenge because at one point there were two people who were already looking very confused and unconfident on the winter route and they thought we were talking to them. 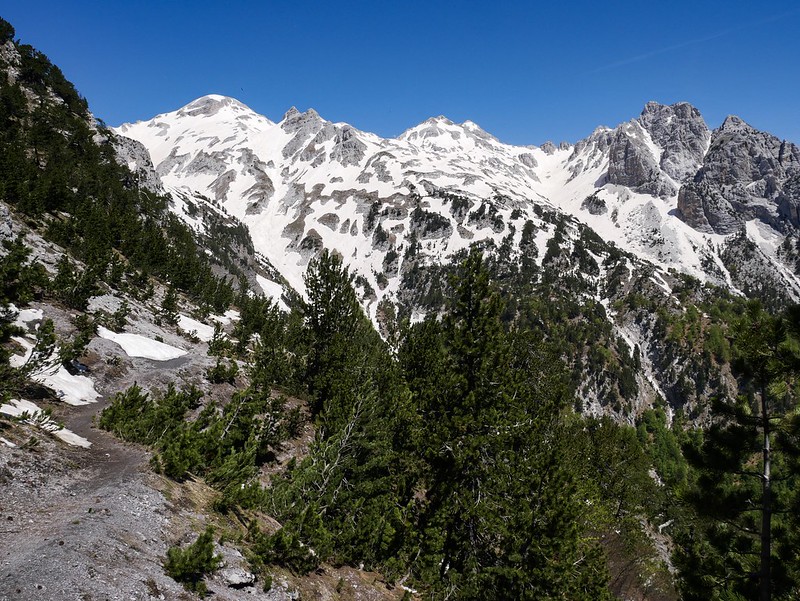 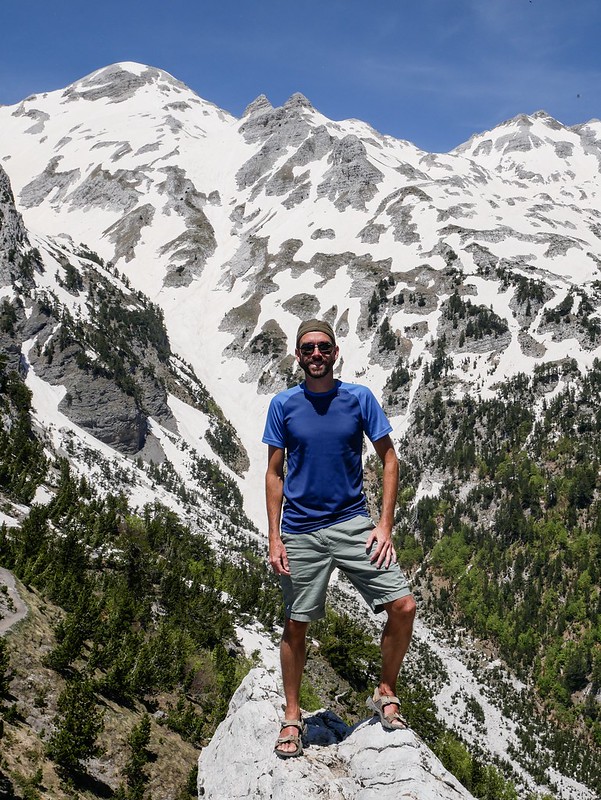 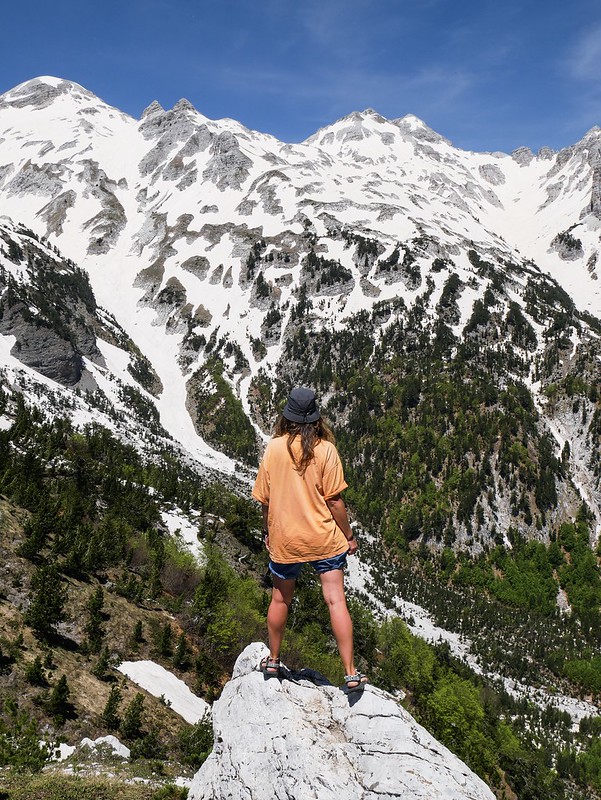 We spoke to a few more people heading to Valbona to check they knew the winter route and no one seemed to know about it!! We were shocked! One older German guy was hiking with his dog and said “it’s ok I have the map” and we had to explain that it’s not marked on any maps. It’s also a lot more dangerous hiking from Theth to Valbona as you have to descend the snowy slopes and getting grip is very tricky. We actually changed shoes once we reached the pass and put on our much comfier sandals and the German guy just looked down at our feet and said “well I’m dressed properly for the hike” as if to say if you managed it in sandals then I’ll be fine. His assumption really pissed me off so I was very quick to explain that we wore hiking boots until we reached the pass and good-fucking luck finding the route mate. I think that’s so ignorant to bring a dog on such a hot, tough hike and not research the route or dangers before hand. If we hadn’t spoken to him he’d of followed the dangerous summer path with his dog. 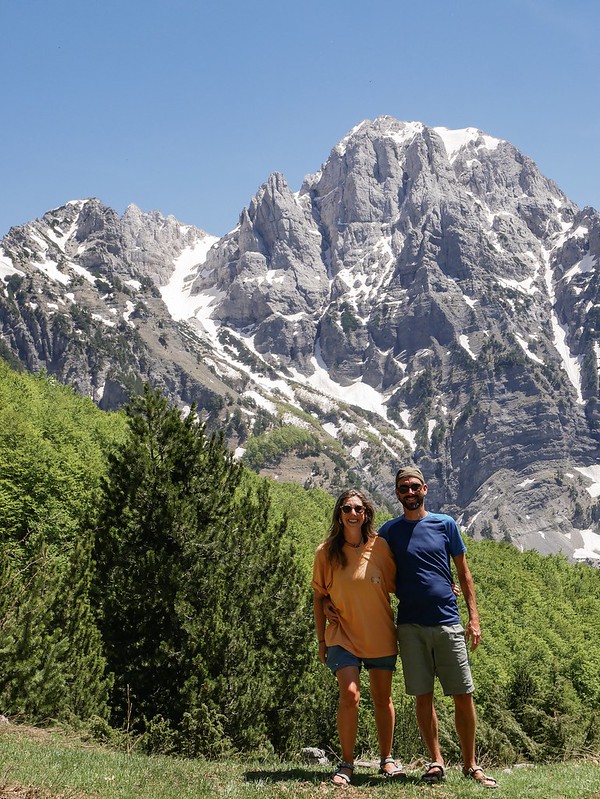 Anyway, the rest of the hike was all downhill and mostly through the cool forest all the way to the village of Theth where we’ll be based for the next 3 nights to do some day hikes.

We’ve drawn a rough route (in the red marker) onto a map to give an idea of the direction we went up towards the pass so I hope it can help some people as we really needed some information like this. However please remember you are taking a risk hiking this route, there’s snow and ice, no pathway or markings to follow and the weather can change quickly. Also remember DO NOT follow the summer route if there’s snow on the path, the unmarked winter route is your only option and please take a guide if you aren’t an experienced hiker. Take a walk around the village beforehand to meet other travellers and see if anyone wants to split the guide cost to save you some money. They’re usually happy to take 4-5 people from what I heard. Happy hiking! 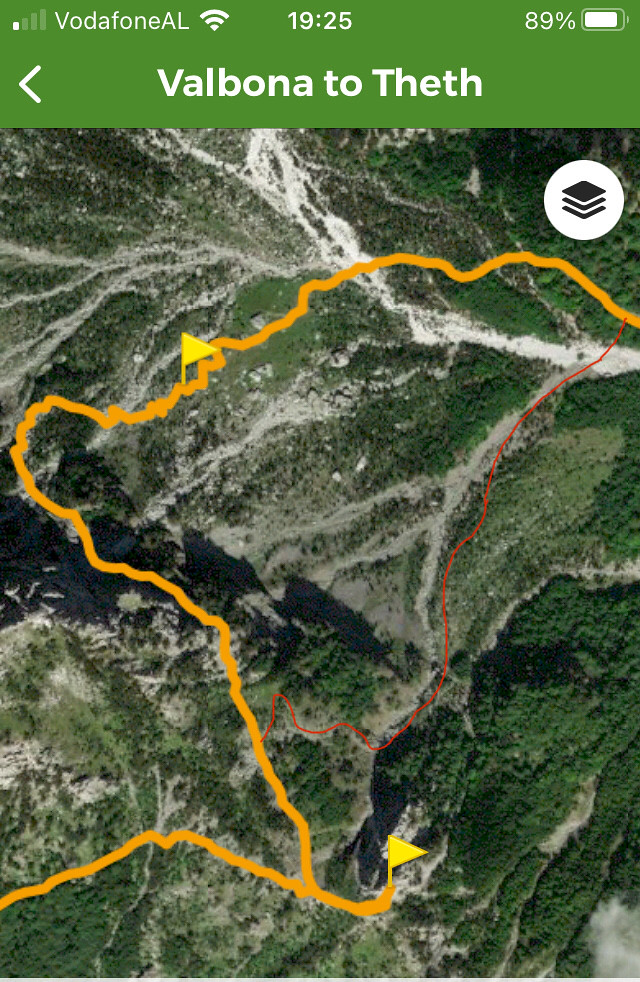