Valbona wasn’t quite what we had in mind. There were mountains all around us with low lying cloud and a wet drizzle in the air. Some people had warned us not to bother coming here as the pass was too dangerous at this time of year and that we should just go directly to Theth instead. Now we were starting to wonder if they were right with this gloomy weather. We didn’t want to do a long hike as we were pretty tired and Craig didn’t want to get cold so we just followed a goat track up a hill where we got a nice view of the valley and we even got to see the culprits of the track when 30 goats were herded up towards us. We soon decided to just head back to our home stay but as we wondered along the road the clouds began to part. Within 10 minutes the weather had totally changed and the mountain tops were revealed from behind the cloud. There were two little restaurants in the village so we decided to treat ourselves to a pick-me-up and buy a couple of macchiatos. They didn’t have any outside seating with a view so we moved a few chairs around and had a lovely snowy peak ahead of us and suddenly the whole vibe of Valbona changed and we knew we made the right choice to come here. 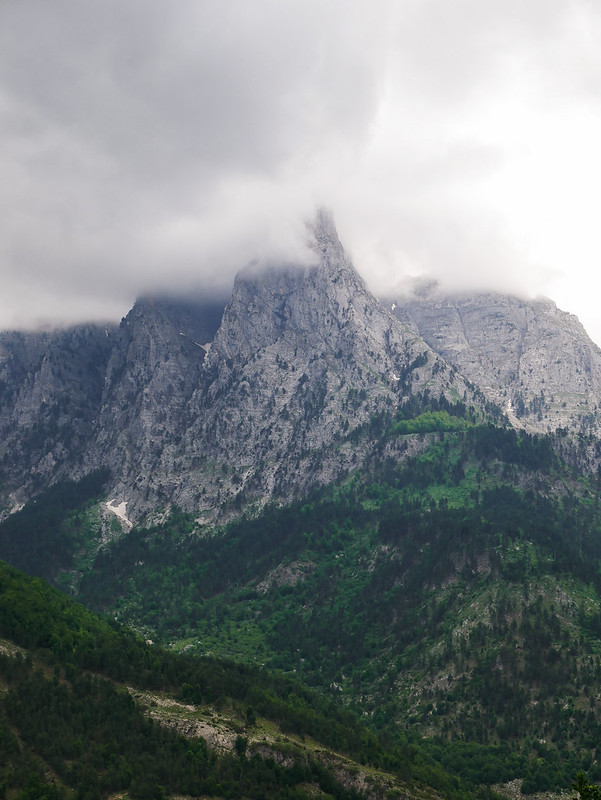 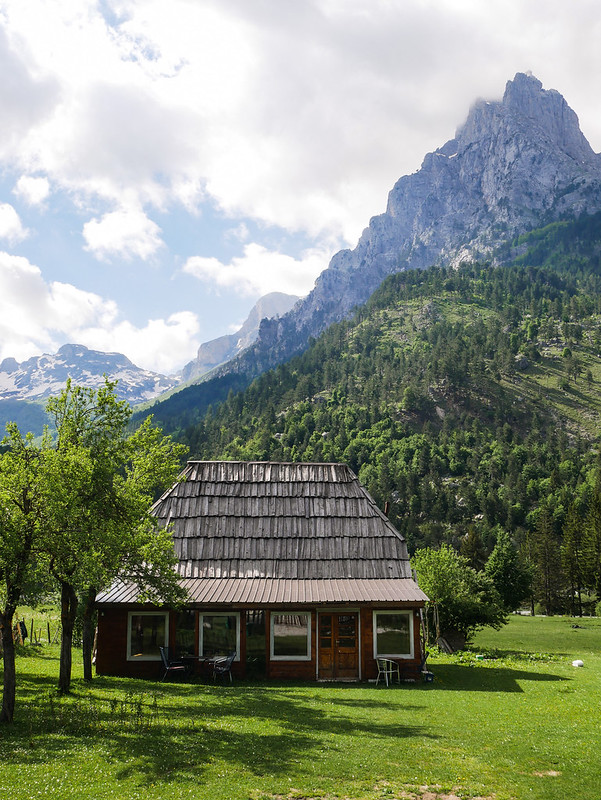 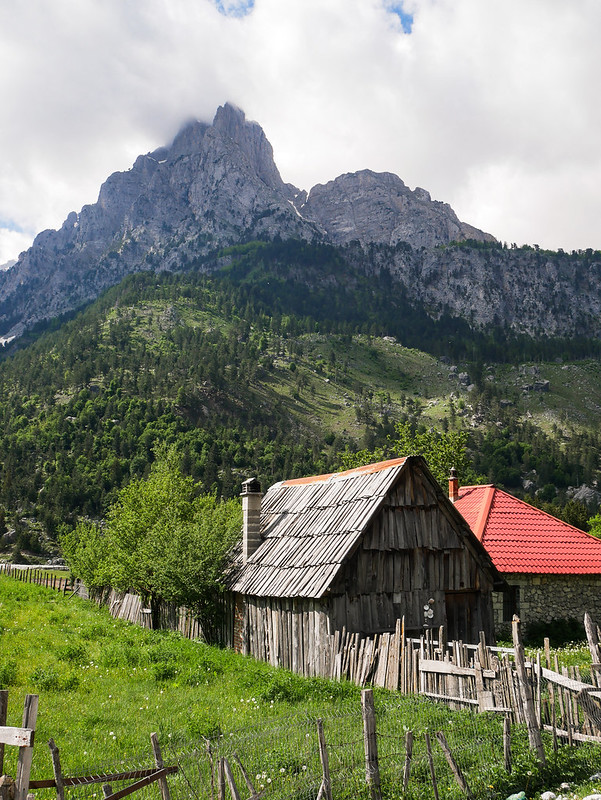 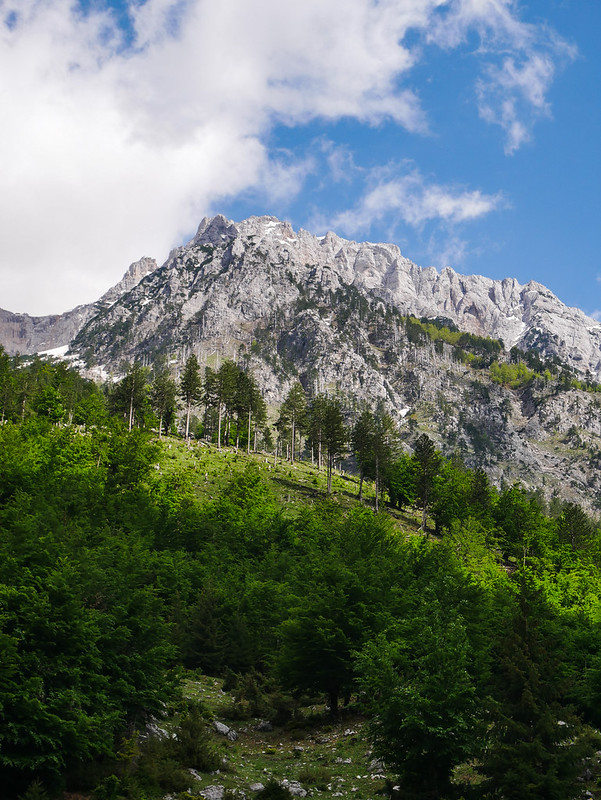 When we got back to our home stay we met our neighbours from the room next door. One was from Ukraine and the other from Chile and they’d just hiked across the pass from Theth so were able to give us very insightful information about which route to take when the summer path is snow covered. Our original plan was to take a guide for €50 which we were reluctant about but seeing as some guesthouse told guests to avoid the pass entirely until mid June we felt like it was a necessity. But these women gave us the confidence to cancel the guide and do it on our own. 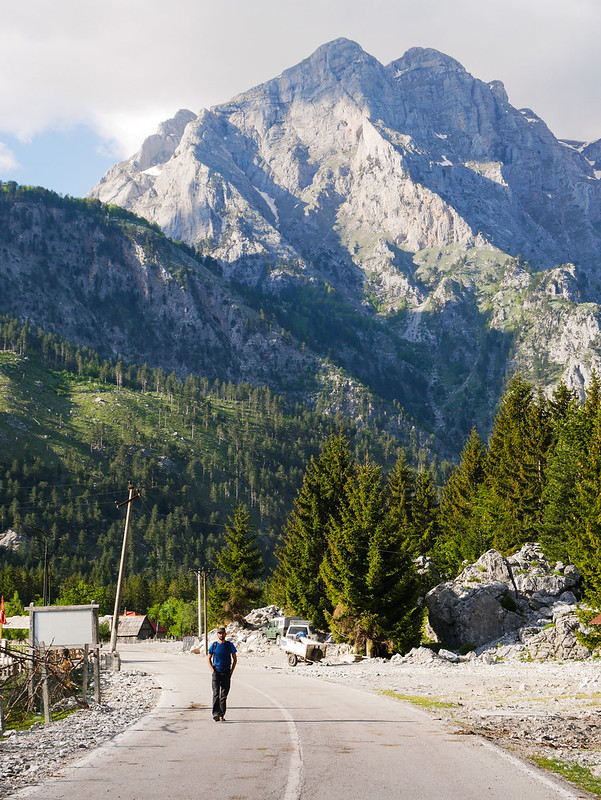 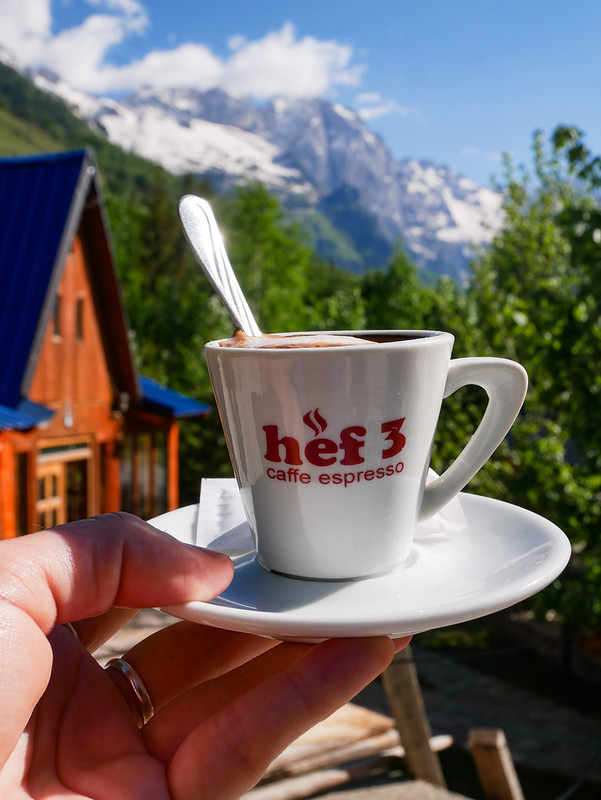 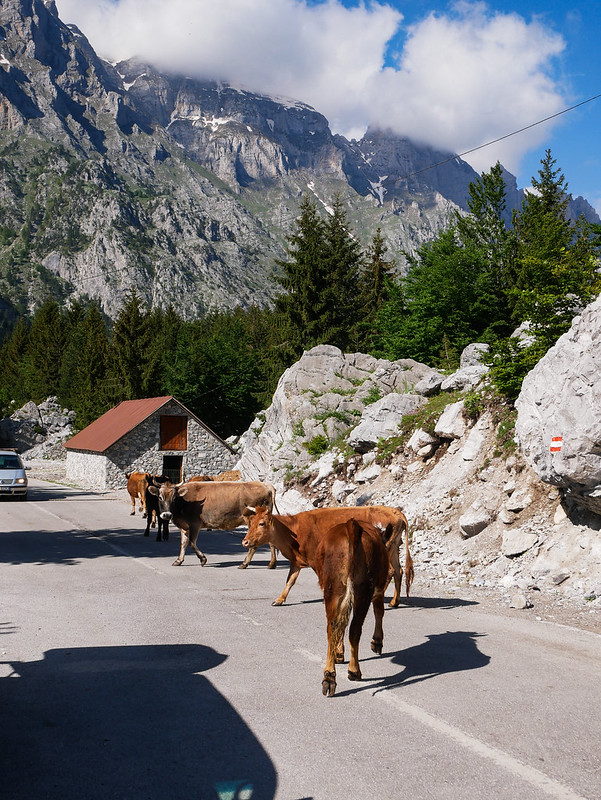 We had a long chat as our host served us all dinner together on the terrace with the most incredible mountain view. Dinner cost €6 per person but it was quite simple with a potato soup, Greek style salad and bread. It was all very tasty though and she catered to my vegetarian needs so I was happy with the meal. 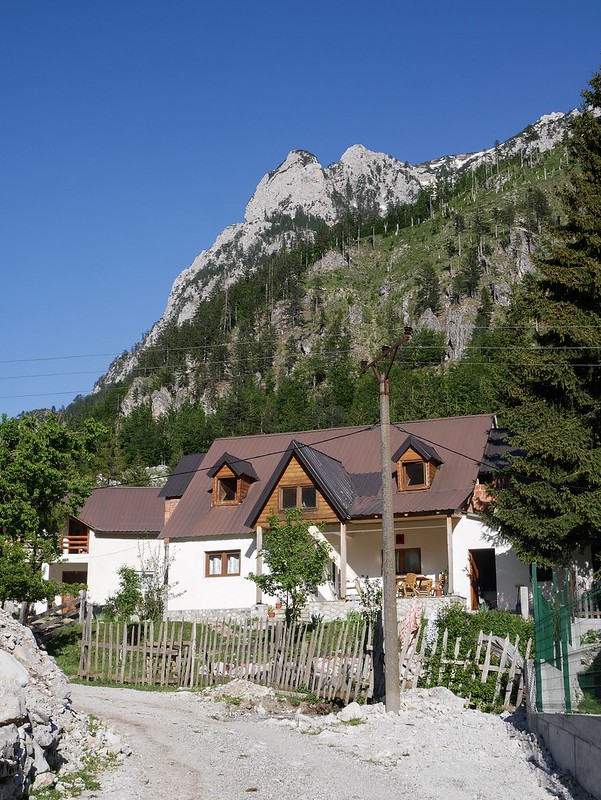 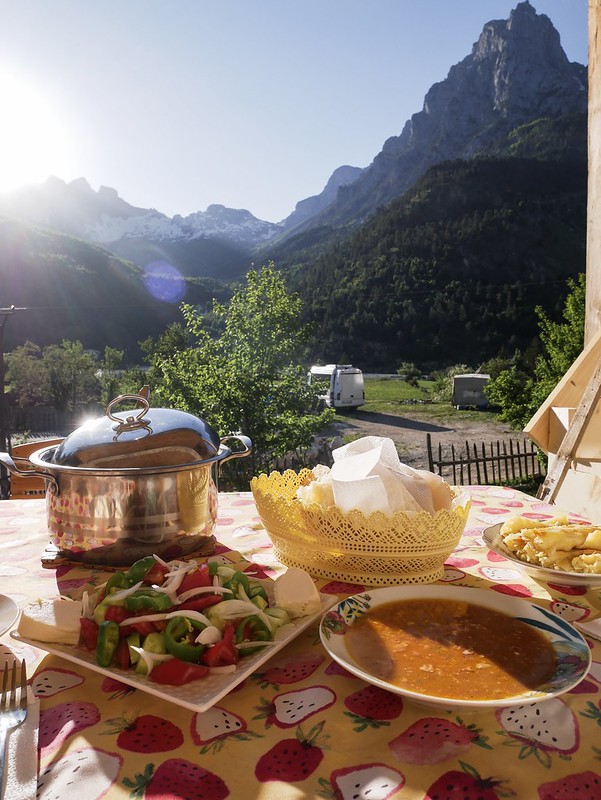 The next morning we were served breakfast on the terrace and this time the sun was behind us so the mountains were crisp with jagged peaks and lush green slopes. We were served an ice-cold and overly fried egg, homemade cheese, fig jam and bread. Instead of coffee she served us a weak glass of cold tea and a glass of slightly warm milk. The milk had sediment on the surface and we realised every single dairy product we were eating was handmade by our host. She had 3 cows and milked them every morning and evening. I guess the milk was fresh from the cows teats which to be honest is a little too natural for me. I took a small sip and it did just taste like milk but I only really like milk on cereal so I donated the rest to Craig. I just love how all these rural places are self sufficient and a few animals provide them with so much food. 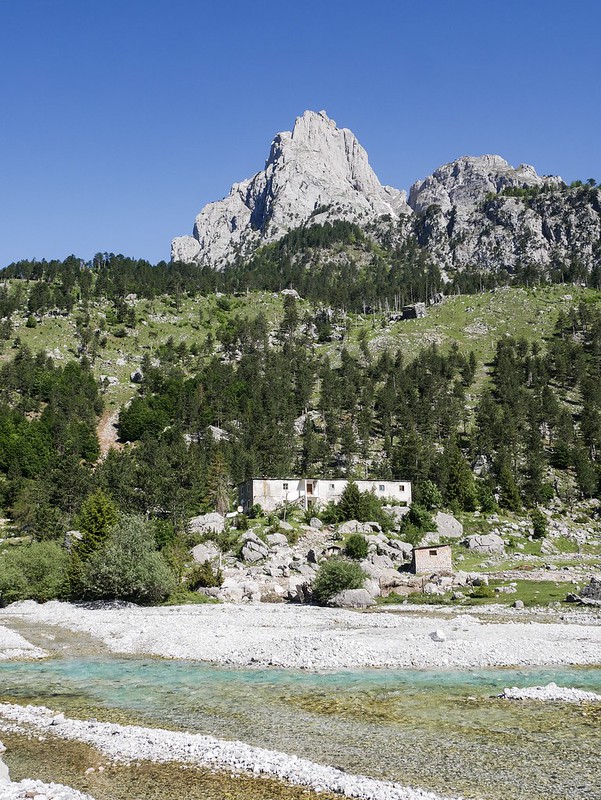 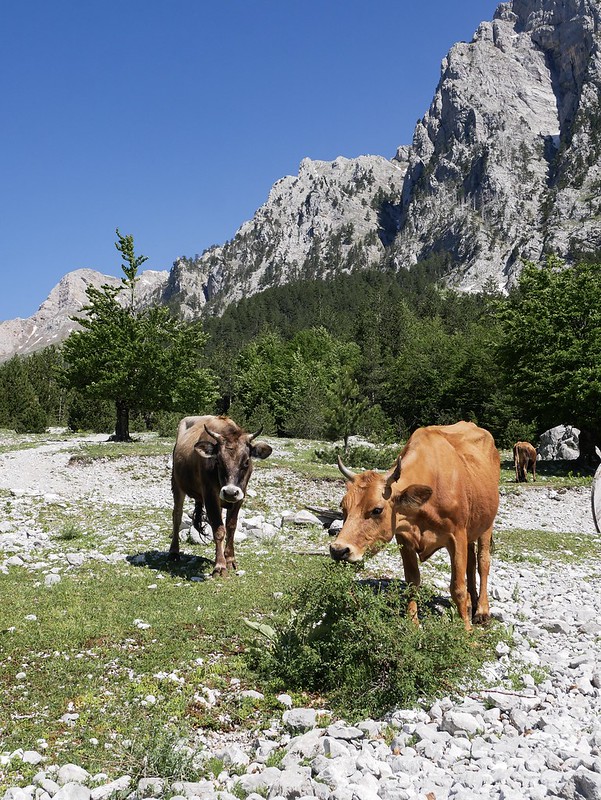 We had a full day of blue skies predicted so we set off on a hike. The scenery surrounding the village was absolutely spectacular with pointy peaks and the bluest river. We had planned to just do a 10km loop as we had our big hike up the pass tomorrow but in true Lauren and Craig style we pushed ourselves. The views were so impressive that we decided to just scrap the loop and continue on this unknown trail that led towards the border with Montenegro. After passing through a few patches of forest we had pristine pastures ahead of us. There were a couple of very remote guesthouses on a small plateau and after that we were truly in the wilderness. It was such a pretty walk with the lush green slopes and spiky mountains still holding onto the winter snow. We soon realised we might actually be able to continue the hike all the way to the border so up we went. It was tough work but luckily there was a gentle breeze which meant the temperature was rather pleasant to hike in. 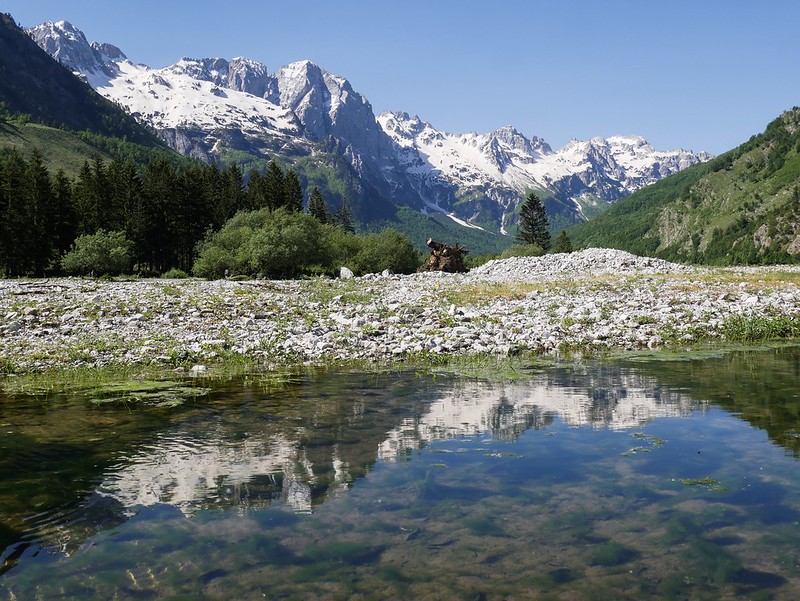 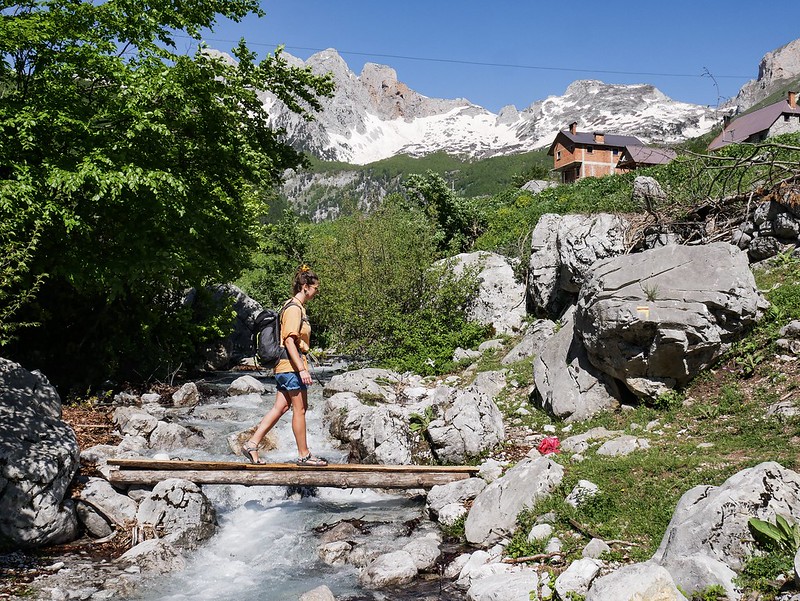 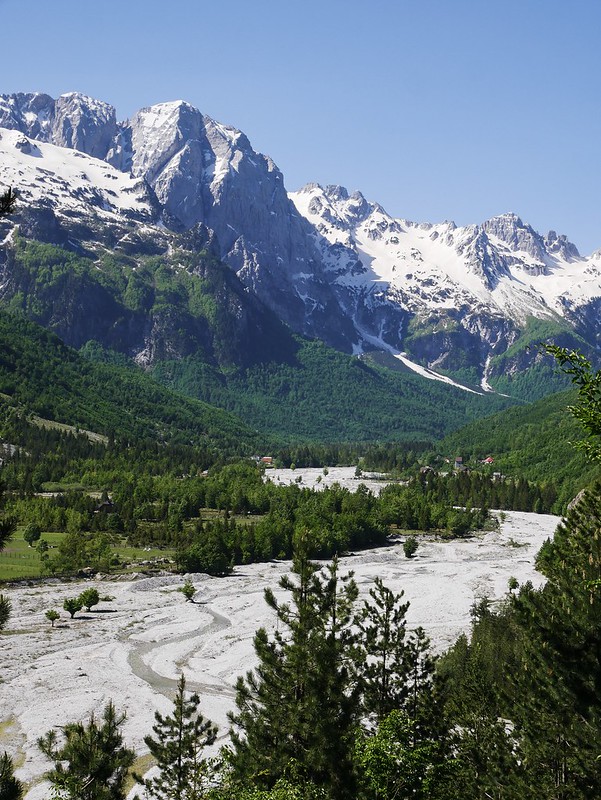 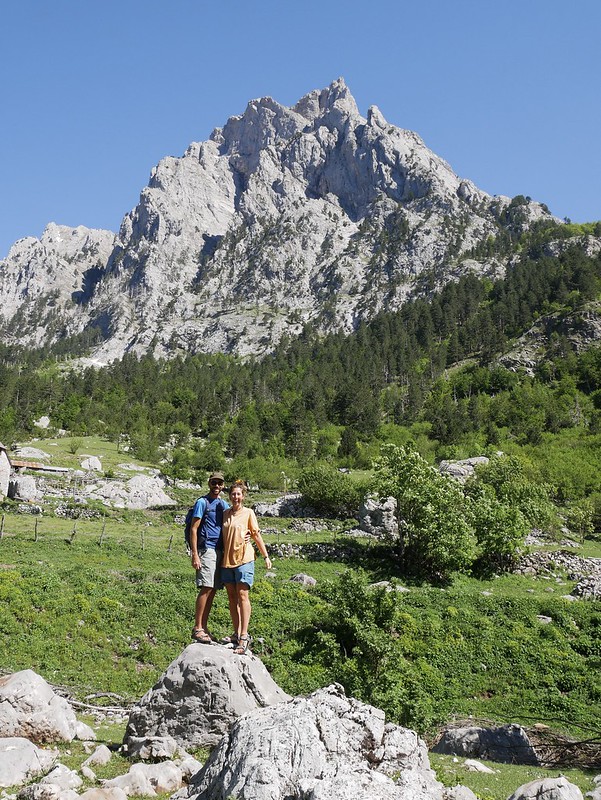 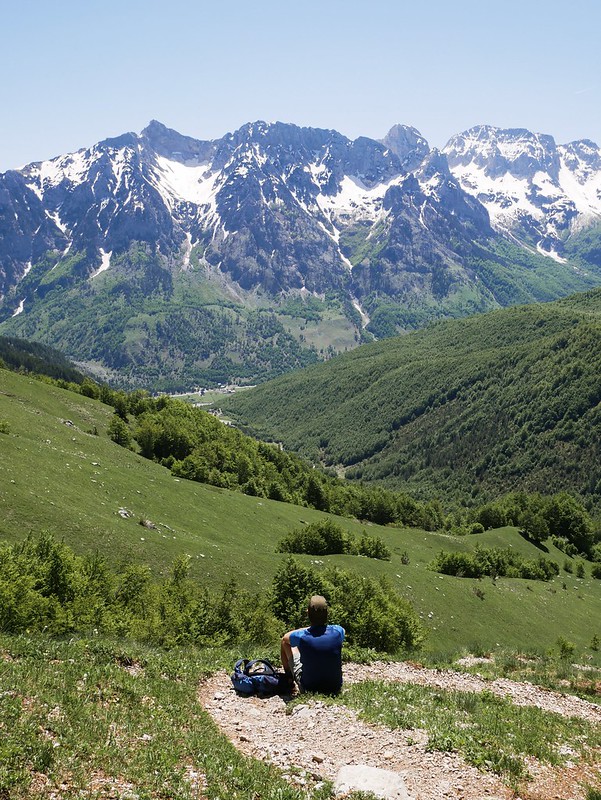 We encountered a few patches of snow as we made our way up and seeing as we were in sandals we tried our best to avoid it. We managed to take some detours and carefully step over small sections of snow and then the final part involved a steep route up a rocky hill. I was almost ready to give up, we really didn’t want to do a long hike today and I was feeling quite exhausted but we pushed ourselves up the final kilometre and boy were we happy we did. The view of the Montenegrin side of the Accursed Mountains was stunning. The mountains had a charcoal black colour to them and they rose up in a series of tall towers. 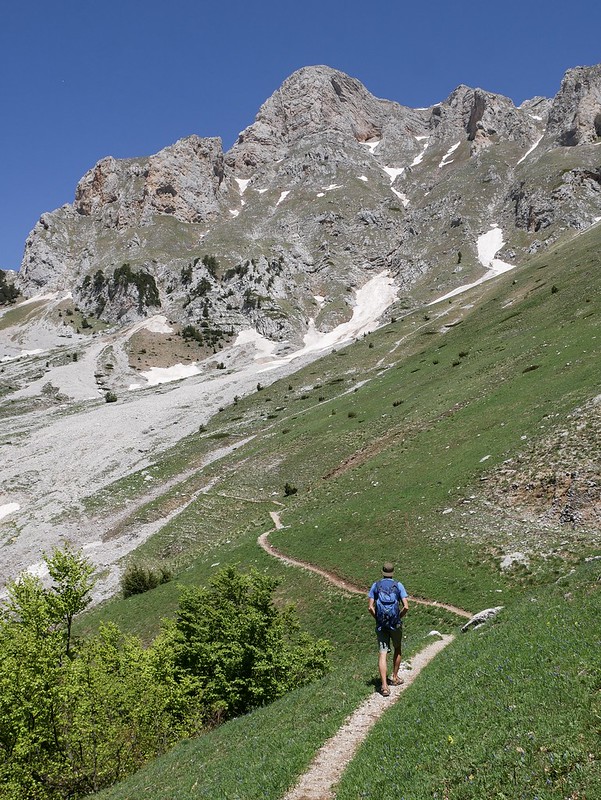 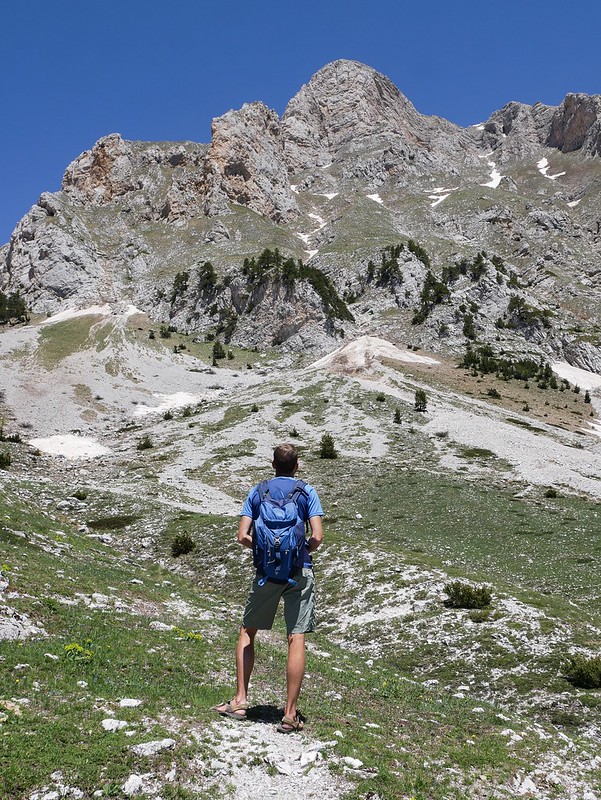 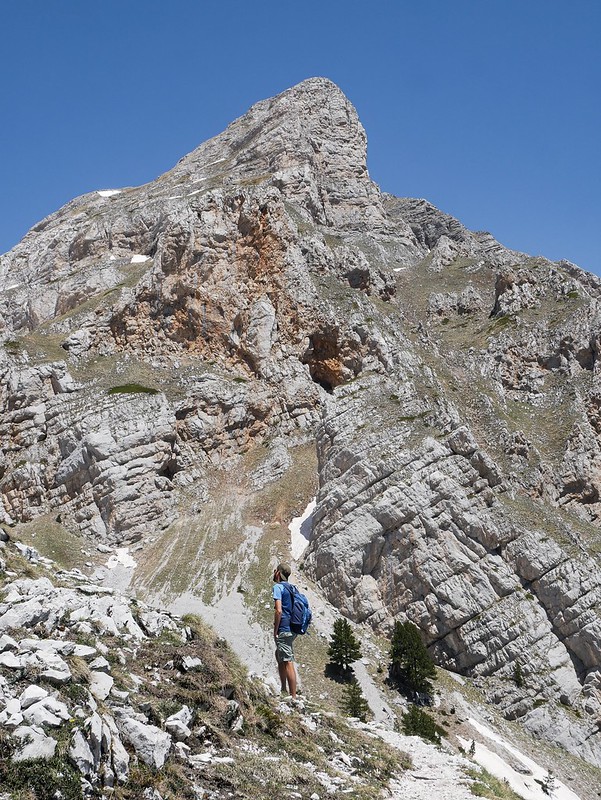 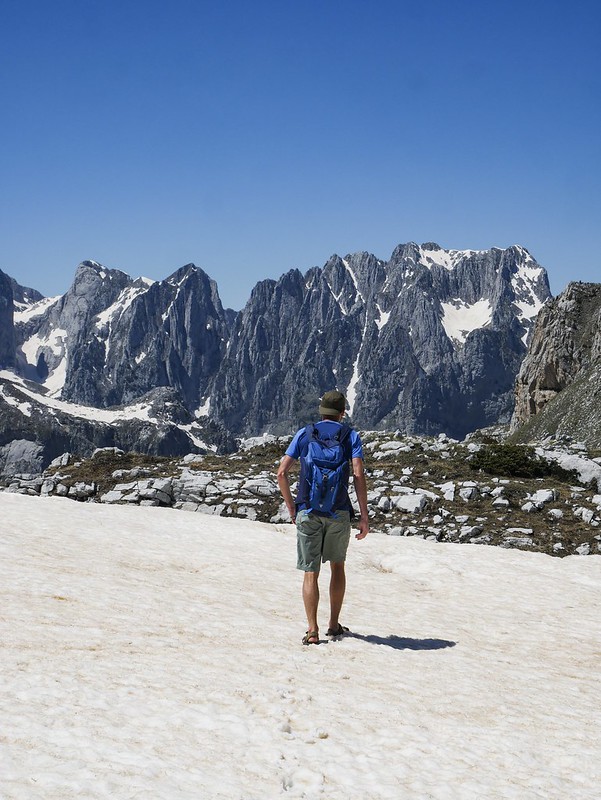 The border was about 20 meters away from us but a deep blanket of snow blocked the route so we took a seat and enjoyed our picnic lunch with the mountain view. The route back was much quicker but the entire hike still took us around 7 hours and we were feeling quite exhausted. We rewarded ourselves with a macchiato outside the little wooden restaurant and headed back to our homestay for an early dinner. 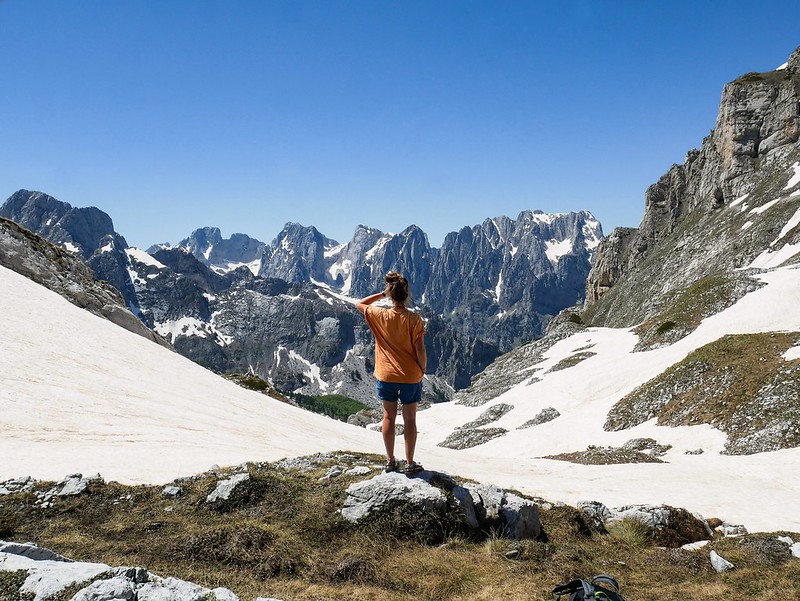 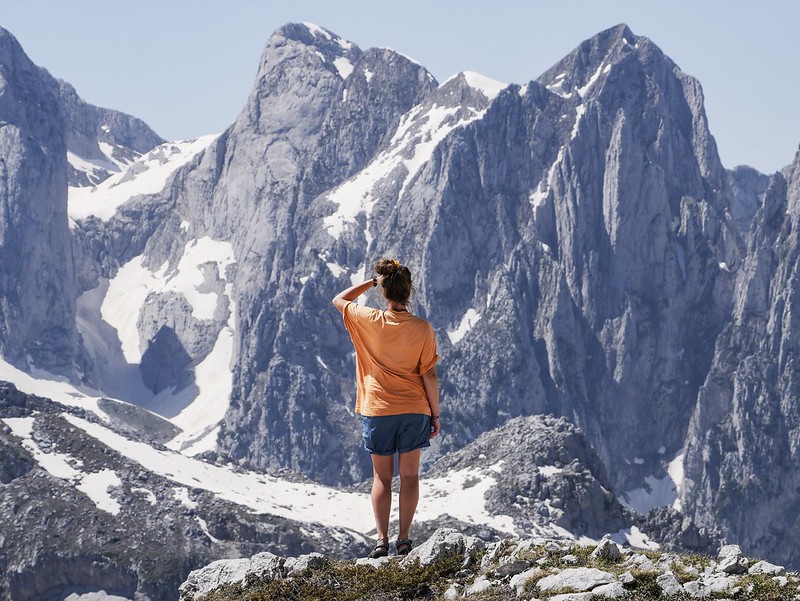 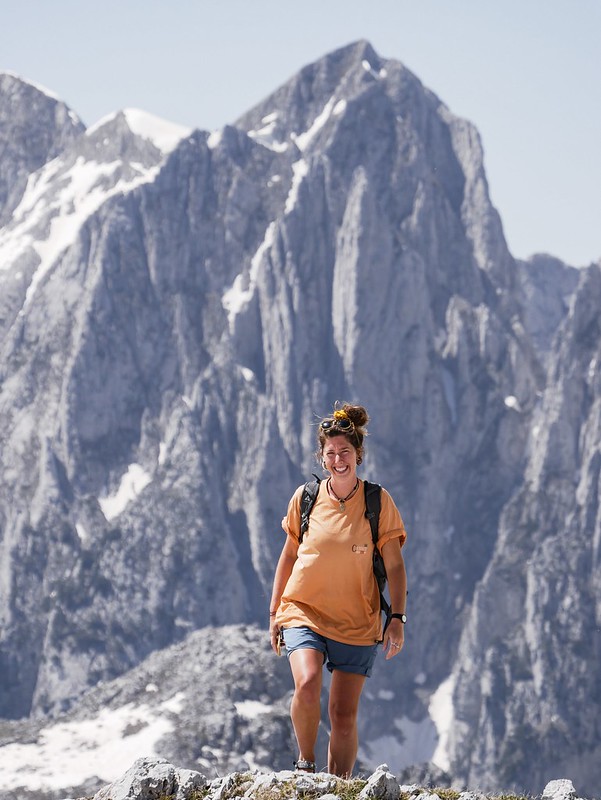 Luckily the meal was much better tonight, we had unlimited traditional bean soup, fresh bread, greek salad and homemade burek which is basically layers of rolled up pastry usually stuffed with meat or spinach but this one was ‘traditional Valbona’ style which seemed to be plain dough with butter which was delicious to dip in the soup. Our host also gave us a cup of homemade yogurt which started off runny and thickened towards the bottom of the cup. Every evening the cows wandered into the garden and our host would take a stick to usher them out which was always a comical sight to witness. Now we need to get an early night to conquer the pass to Theth tomorrow. 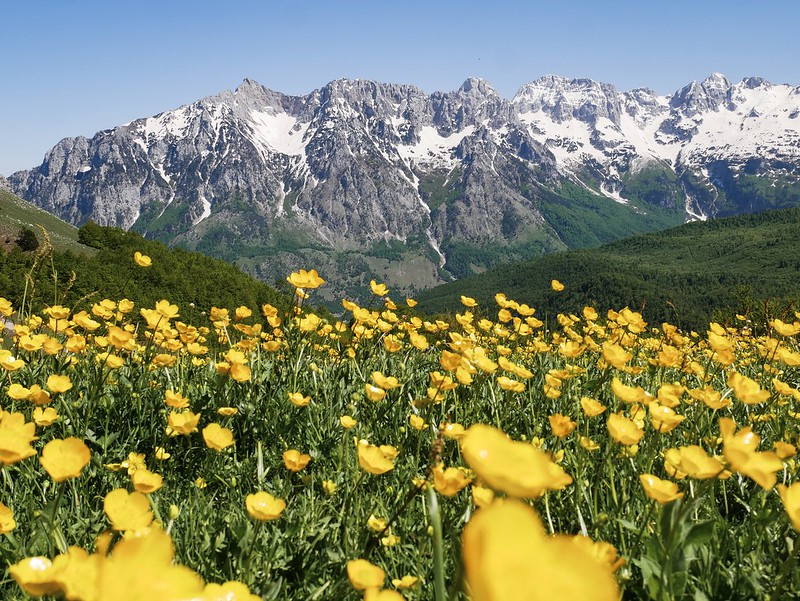 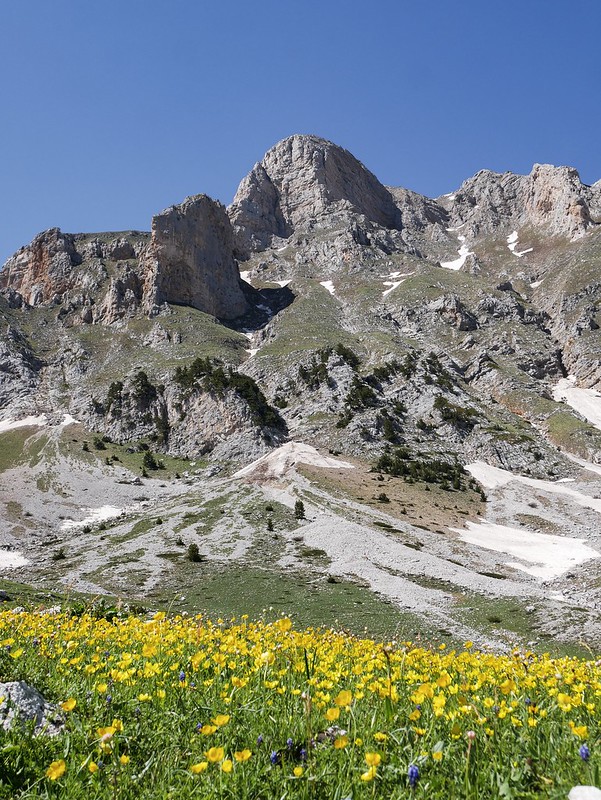 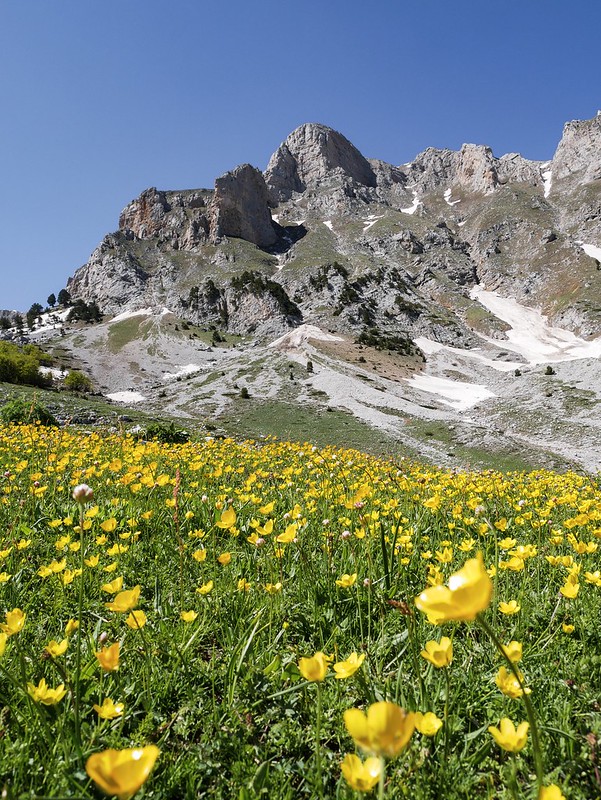 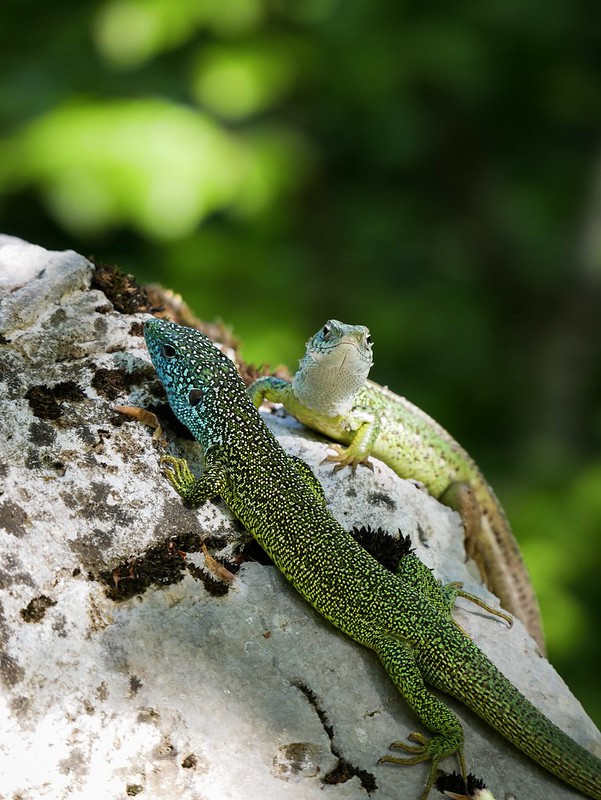 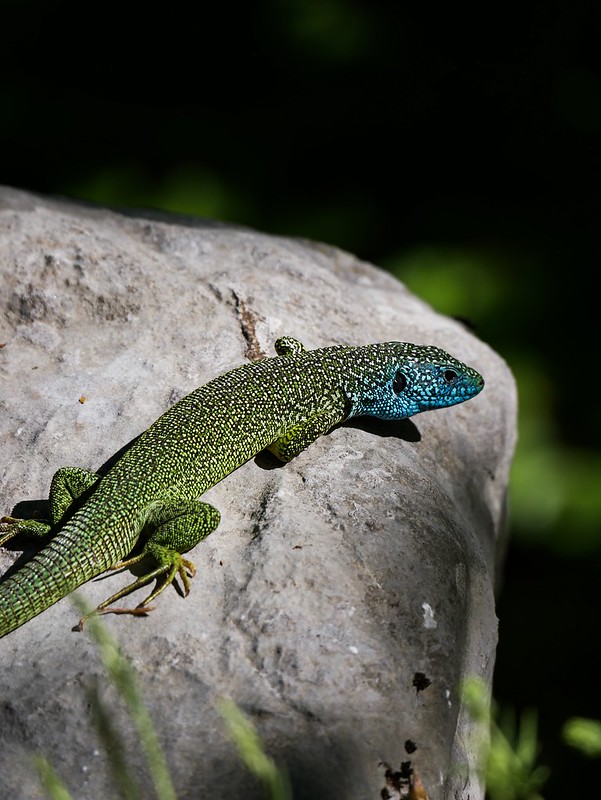