It was about 28° as we set off with our backpacks to a random street corner in Ulcinj waiting for a shared car to take us to Shkoder in Albania. Our instructions were to wait beside an abandoned fire truck, which also happened to be where the neighbourhood bins were stored and overflowing, causing a feeding frenzy of feral cats. Luckily the car arrived as promised but just as we arrived at the border with heard a familiar noise and Craig announced “we’ve got a flat tyre”. This happens far too often with us. After about 30 minutes we were back on our way to Shkoder. We were happy to discover the food was very cheap in Albania so we could finally treat ourselves to some meals out. 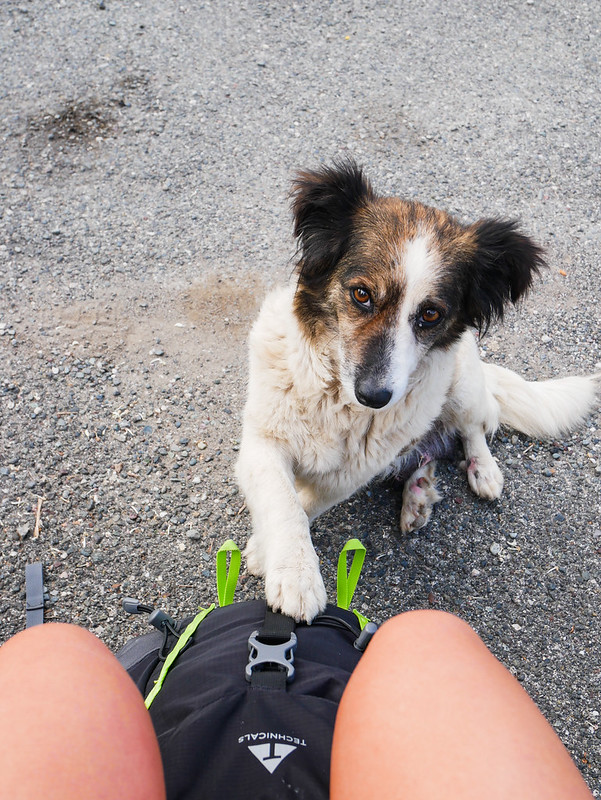 Shkoder was a really pleasant town, it had a colonial feel to the buildings with pastel painted fronts and wooden shutters. There were a few pedestrian streets with plenty of cafes and restaurants and they all seemed to be popular with young locals, even on a weekday. We made our way to a busy eatery for dinner and the wait staff were delightful. We didn’t have a huge meal but a big Greek salad, small moussaka and two pints cost about €10. Then we made our way to one of the many gelato shops and couldn’t believe how good it was. For about 40 cents we got a scoop of the creamiest gelato imaginable. It was so good we went back three times and tried as many flavours as possible.

For breakfast the next morning we popped across the road to a cafe where we got two macchiatos, two cappuccinos, two burek pastries stuffed with spinach and a chocolate croissant for €4. And dinner was a pizza and chips for €5 so we were very happy to wine and dine at those prices. We also visited a castle to the south of the city but it didn’t wow us, most historic sights don’t to be honest as our main interest is nature. The heat was quite suffocating too so we found the walk there quite tough and pointless. 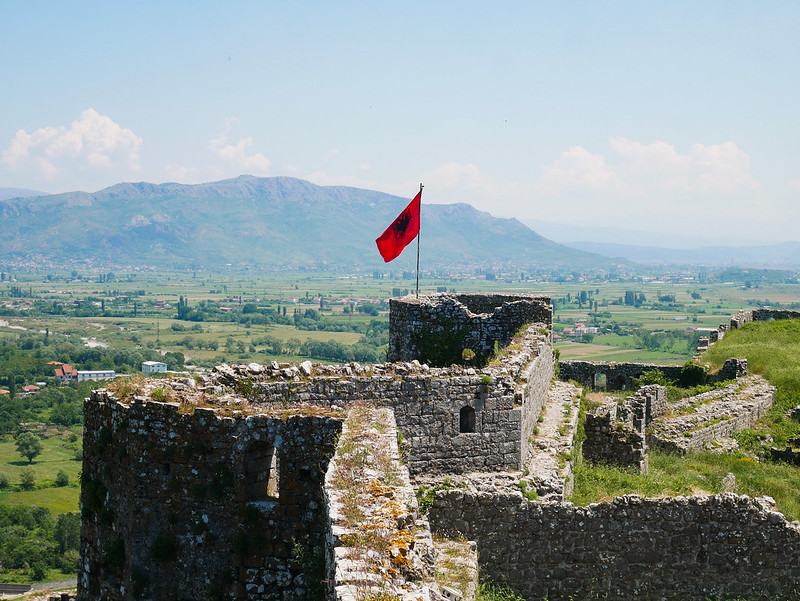 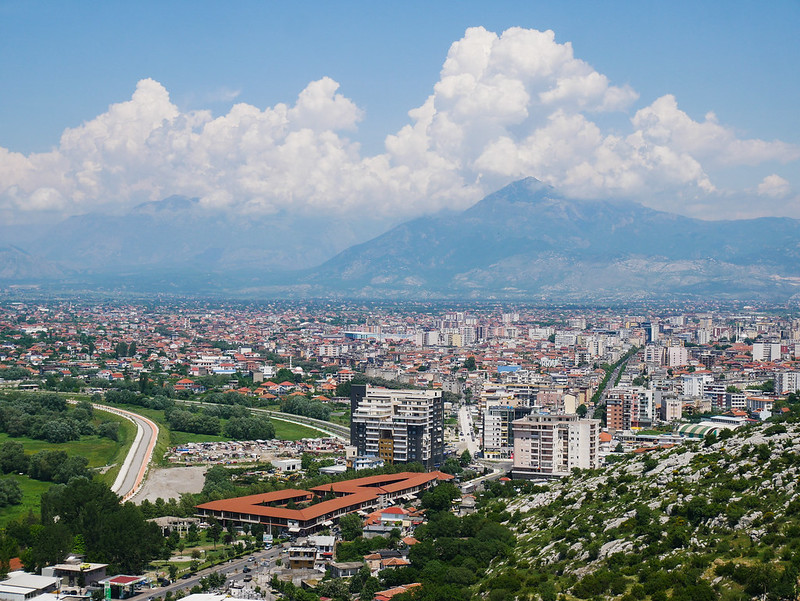 The main reason for our visit to Shkoder was to plan our trip to the mountains as minivans leave from here. We also needed to store our main luggage at our rather unhelpful hostel which proved to be more challenging than we’d hoped. Because our transport was at 6am he said we needed to drop our luggage off at the shop downstairs the night before. Just before we got our bags we asked in the shop to confirm it was the right place and received two very blank and confused faces. They had no idea what we were talking about, even with our charades to demonstrate a backpack. So we headed back to our room and frantically messaged the owner with a google view of the road and the shop circled to confirm it was the right place. To which he responded “no…that’s not the shop”. For fuck sake. Turns out it was a strange library bookshop on the 2nd floor of our building and we just went in and left our bags in the photocopy room, hoping they’d be there when we got back a week later.

So now it’s time for the mountains! The far north of Albania is home to the Accursed Mountains and it’s said to be the highlight of the country. For €20 per person we had a minivan pick us up from our hostel in Shkoder and take us on a scenic two hour drive to Koman. From there we were moved onto a ferry which would take us along Koman Lake for 3 hours and finally a minivan would collect us at the other end and take us to the little mountain village of Valbona. To create the loop we’d need to hike 17km over a mountain pass to the village of Theth where another minivan would take us back to Shkoder. The transport to Valbona would be on the first day and after that we could spend as many days as we liked hiking around the mountains. We had one obstacle in our way which was snow still lingering around the pass and making it very dangerous to hike but I’ll explain more about that in another post. 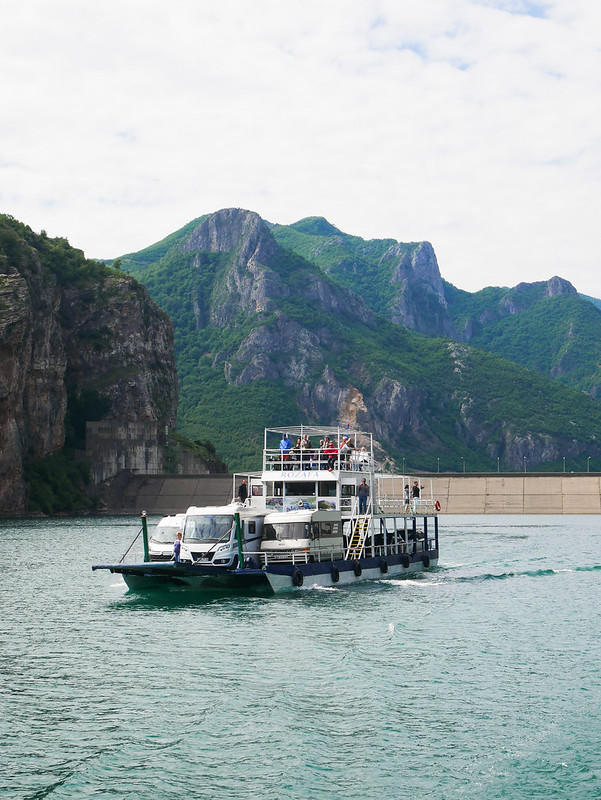 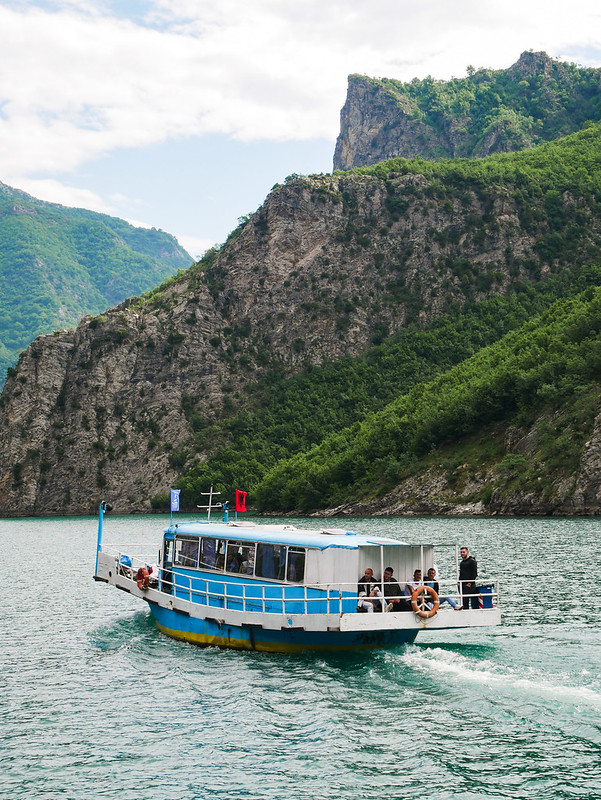 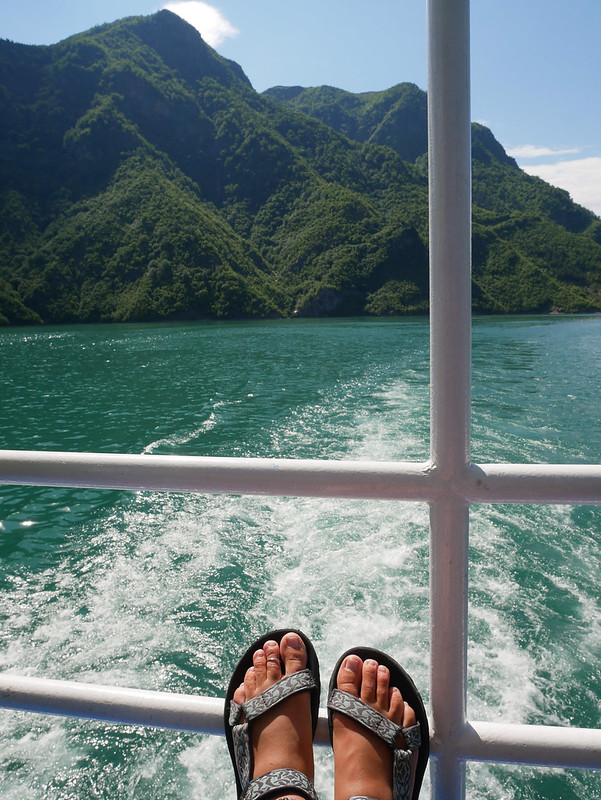 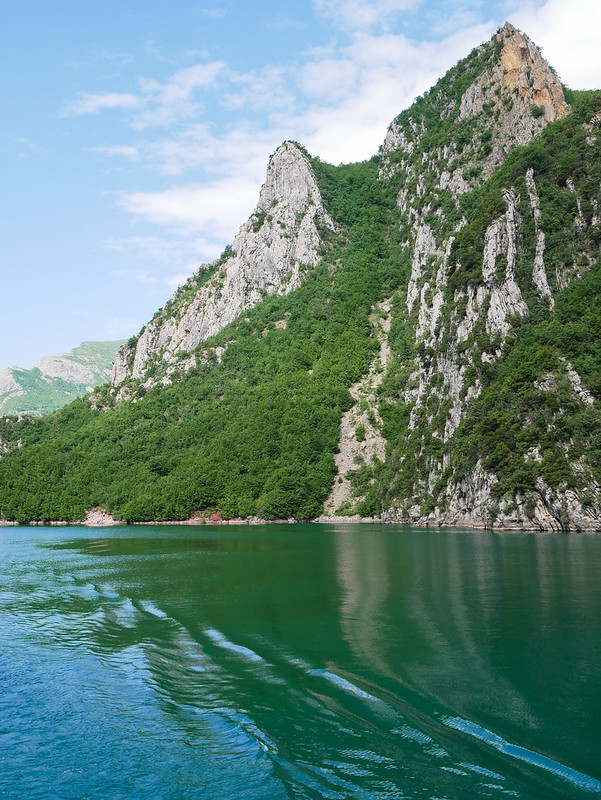 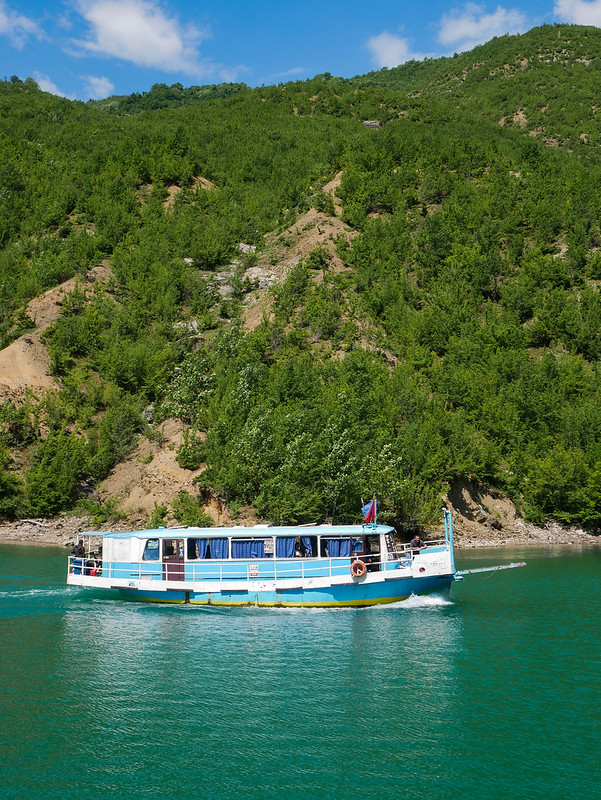 The ferry ride was pretty impressive in itself. The lake was actually manmade from when they built the dam so this dramatic, mountain-lined valley is now filled with blue water. Vehicles can also be loaded onto the ferry so we saw quite a few campervans onboard. The scenery changed around each bend of the narrow lake from forested slopes to jagged rocky peaks. We did a couple of stops in the middle of nowhere where a couple of people had built homes and lived totally off-grid. Towards the end of the lake the water changed from a peacock blue to a milky turquoise colour like a glacial fed lake. We even saw a 2 meter snake swimming across the surface which was pretty cool. 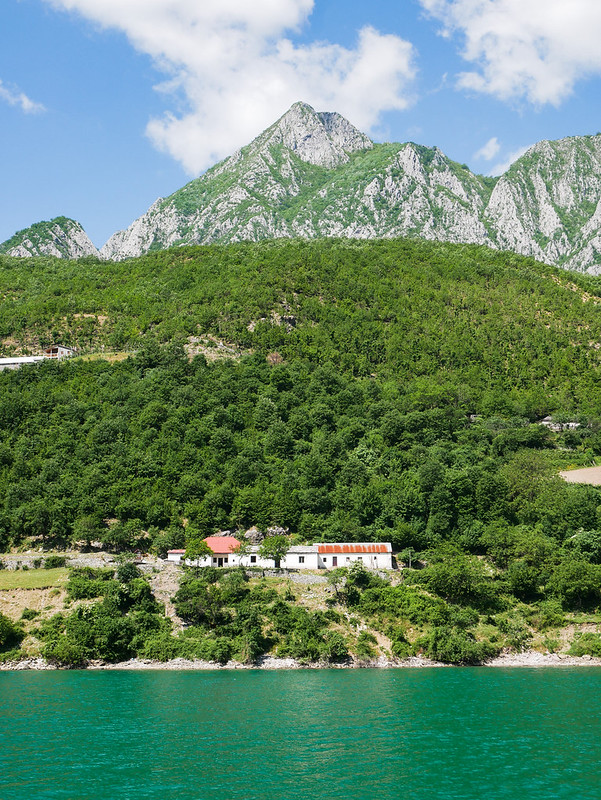 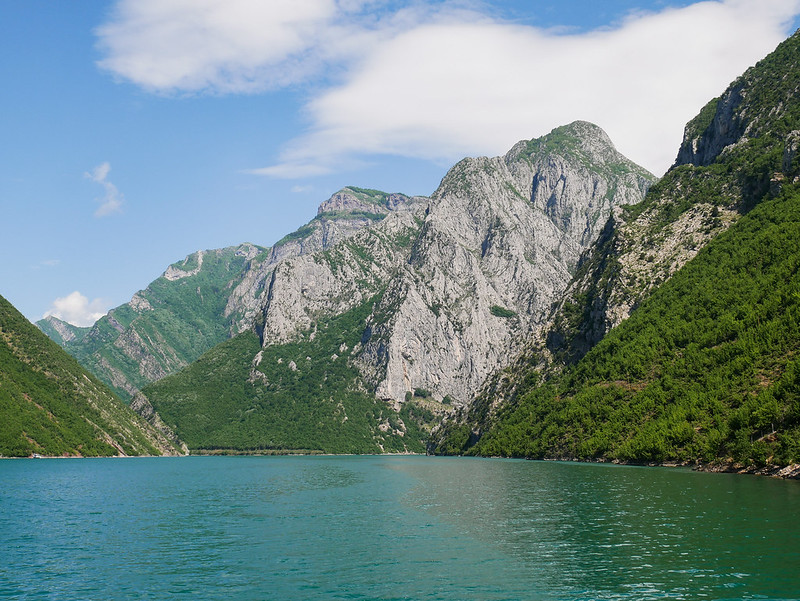 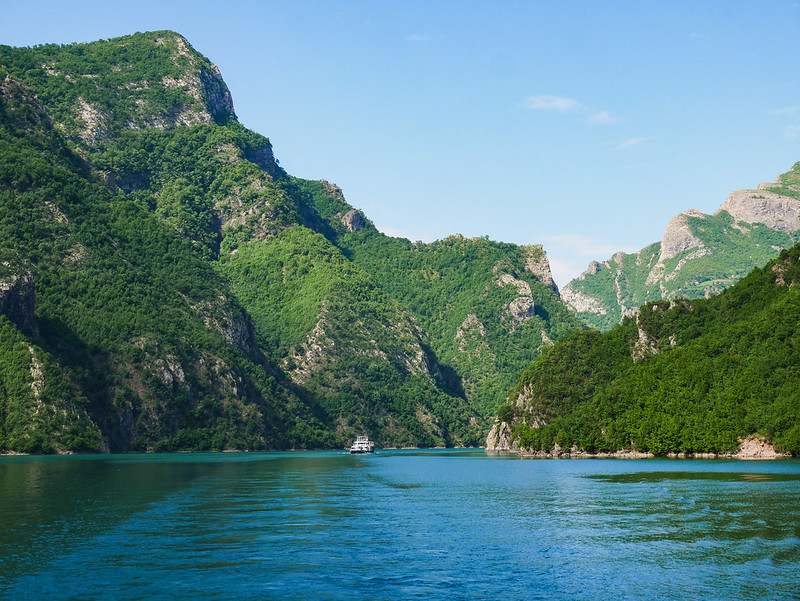 As we arrived in Fierze a van picked all us tourists up and headed towards Valbona. The weather changed quickly and it began raining heavily, but that didn’t seem to bother our driver who continued driving without using his wipers. Valbona was mostly made up of guesthouses built along the lush green valley. For some reason the owners didn’t like to leave a sign or house number outside so we had no idea who’s guesthouse was who’s. We were all giggling when we tried to pronounce the name of our guesthouse to the driver. Apparently I mispronounced it so badly that he didn’t even recognise the name, so it was a good job that I spotted a familiar looking house from the pictures I’d seen online. 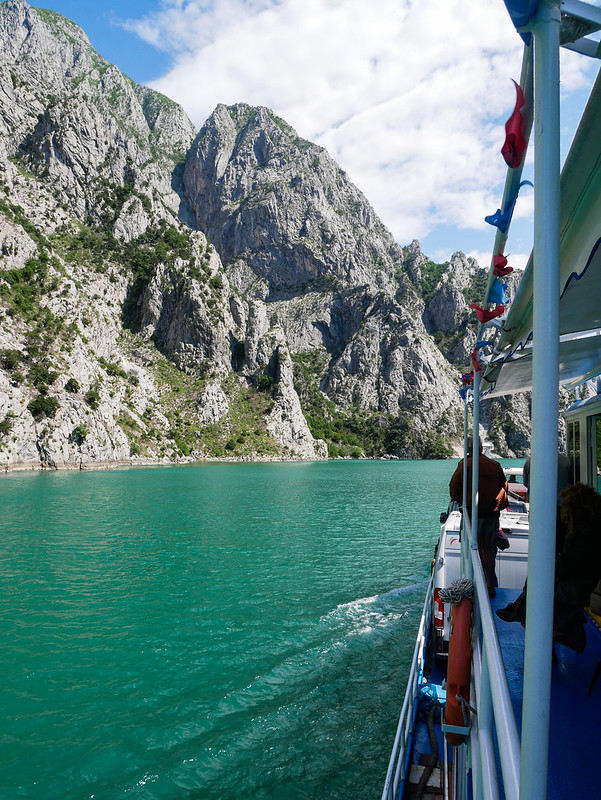 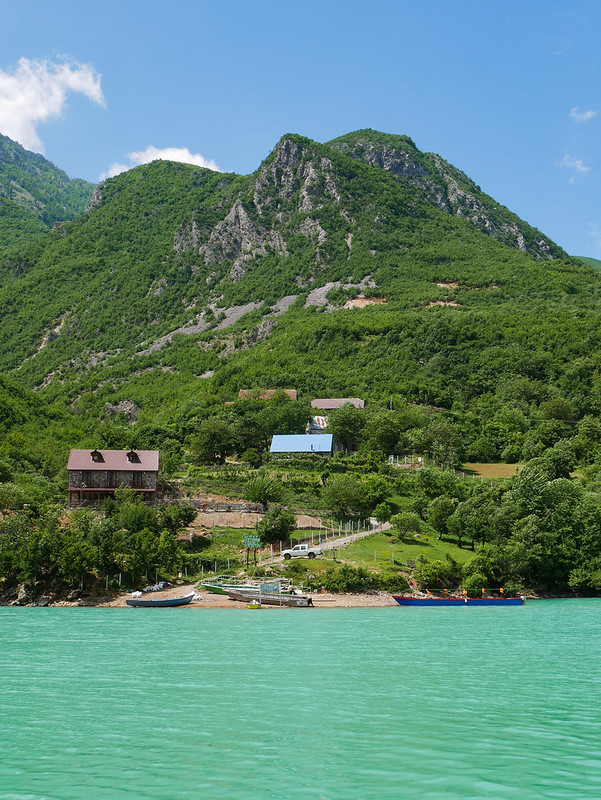 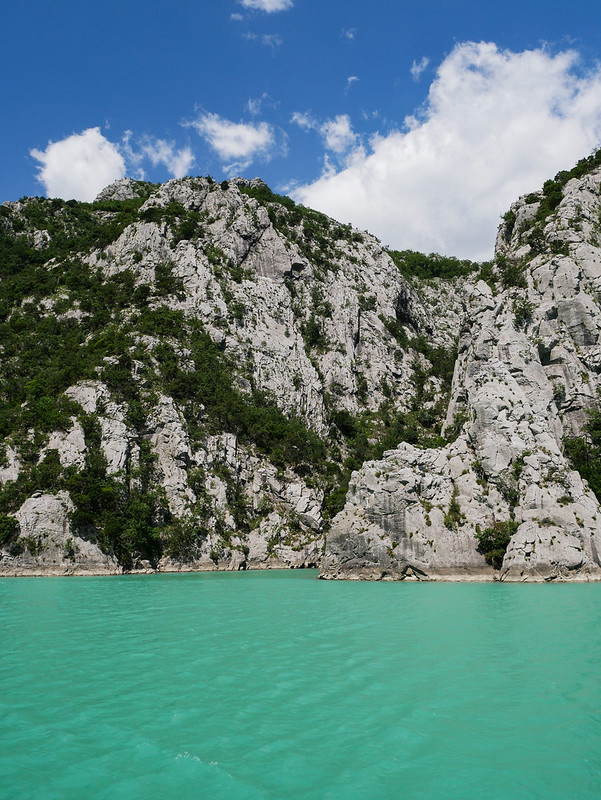 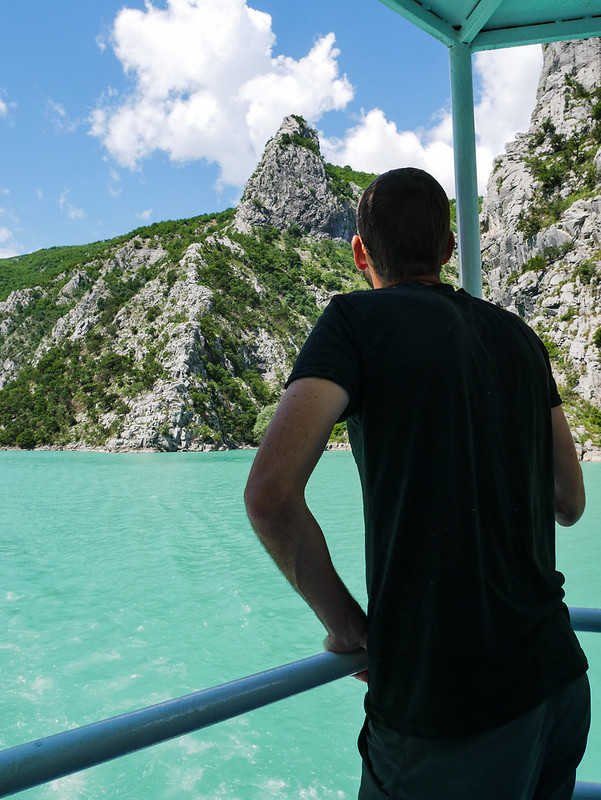 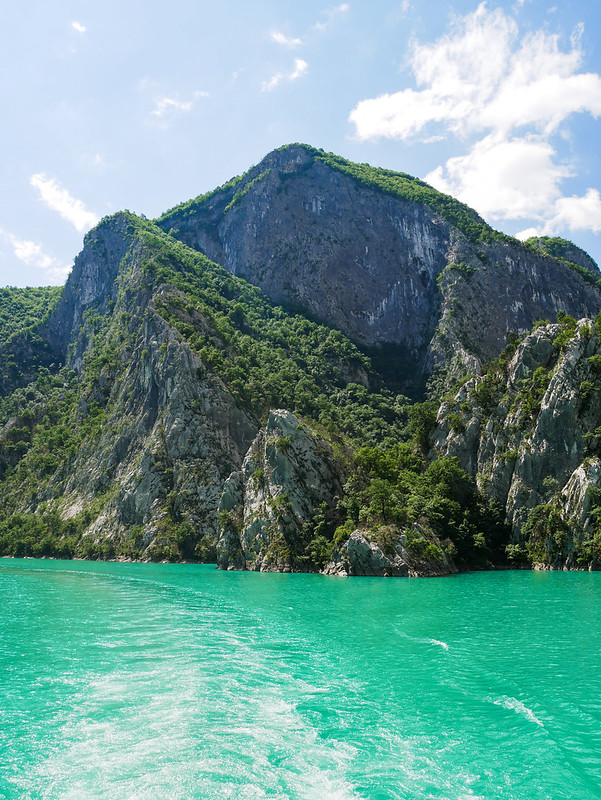 We were greeted at our little homestay by a smiley lady with hay coloured hair and big gold hoop earrings. She just had two rooms which shared a bathroom and featured a squat toilet which was immaculately clean. I was hoping to be offered a welcome coffee but that didn’t seem to happen so we decided to head out for a stroll. The village sat at about 900m elevation and with the cloudy weather it created quite a chill to the air. Suddenly Craig looked a little panicked, he’d gotten so used to the heat along the Montenegro coast that he somehow forgot mountains have a different climate, as if it was our first time visiting them!! I asked him what warm things he brought along “3 T-shirts…so I can wear all of them at the same time”. Not only did this fool not pack a jumper he also didn’t pack a fucking coat so all he had was a thin pair of trousers and a plastic poncho incase it rained. My goodness, it’s like letting a 5 year old child pack his own bag for a holiday. Lucky for Craig I came very prepared so was able to donate him my very tightly fitting purple coat as I also had my puffer jacket. It’s going to be an interesting week in the mountains!!