Locals describe the coastal town of Budva as an absolute disaster. What was once a quaint village has now expanded into an overdeveloped seaside resort. While it still has the beautiful old town, everywhere else is built up with high-rise apartments ready to be rented out in the high season. We weren’t sure whether it was worth visiting but after finding a very cheap studio apartment for just €15 a night we decided to spend a couple of days there. 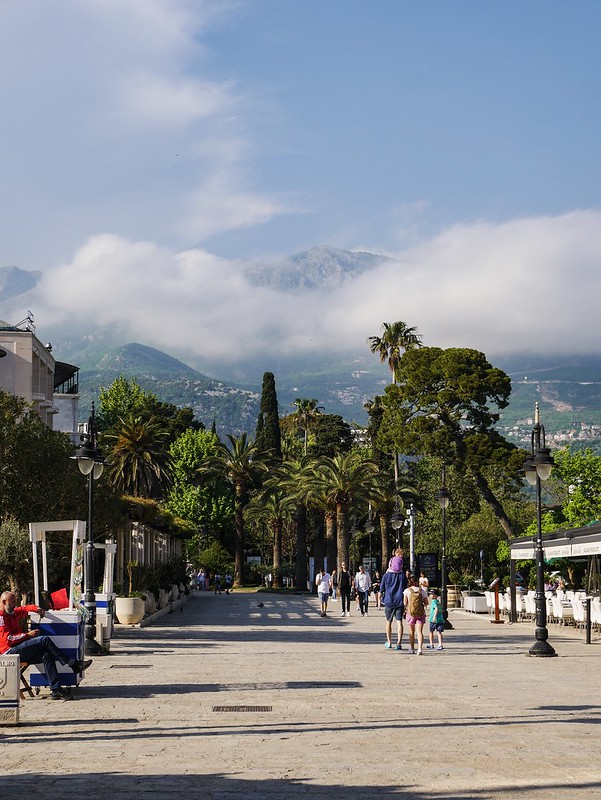 We checked into the studio and cleaned the toilet ourself because it appears that’s not part of the cleaning schedule in Montenegro. We couldn’t help but laugh at our apartment, they provided a miniature pink, plastic kettle that fell apart as soon as we so much as looked at it. We headed straight out to catch a bus to Sveti Stefan…affectionally nicknamed ‘Sweaty Stephan’ by us. The bus journey was only about 15 minutes and we started by exploring the hilly roads of the village to get a vantage point of what’s become Montenegro’s most photographed sight. It’s a privately owned fortified island connected to the mainland by a causeway and donning a curved beach on either side of it. The island is home to a collection of 15th century stone buildings with typical terracotta tiled roofs. It’s owned by a private resort and prices start at €1323 for a night in a suite. There’s one public beach beside the island but the others are owned by the resort and charge €120 for access to them!! Luckily at this time of year the resort is closed which means all of the beaches are free to visit. 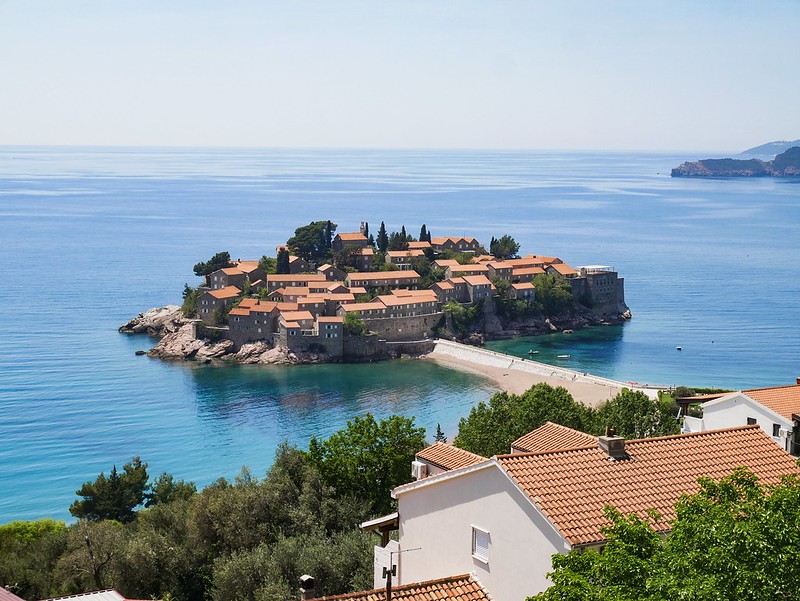 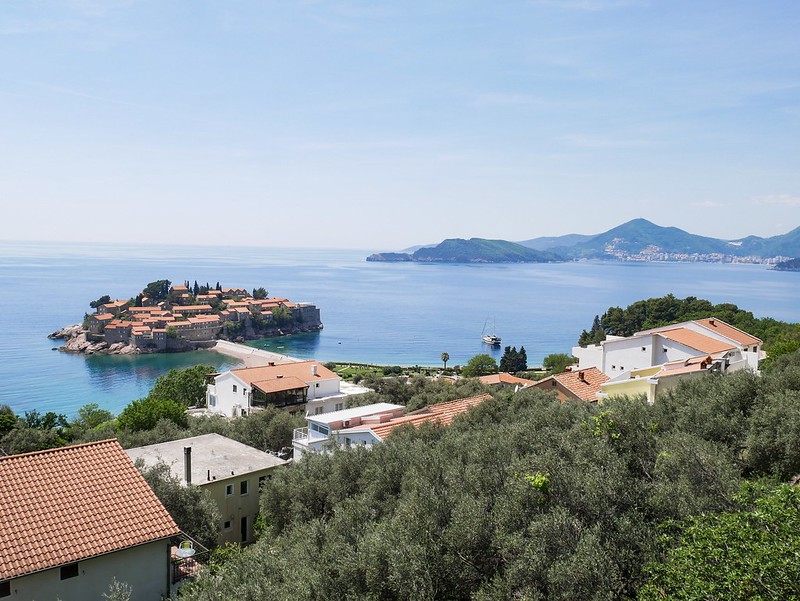 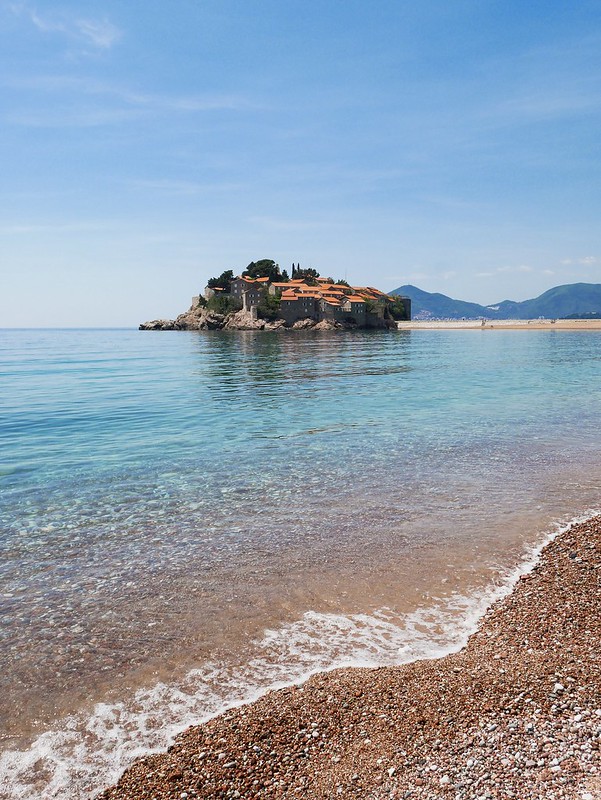 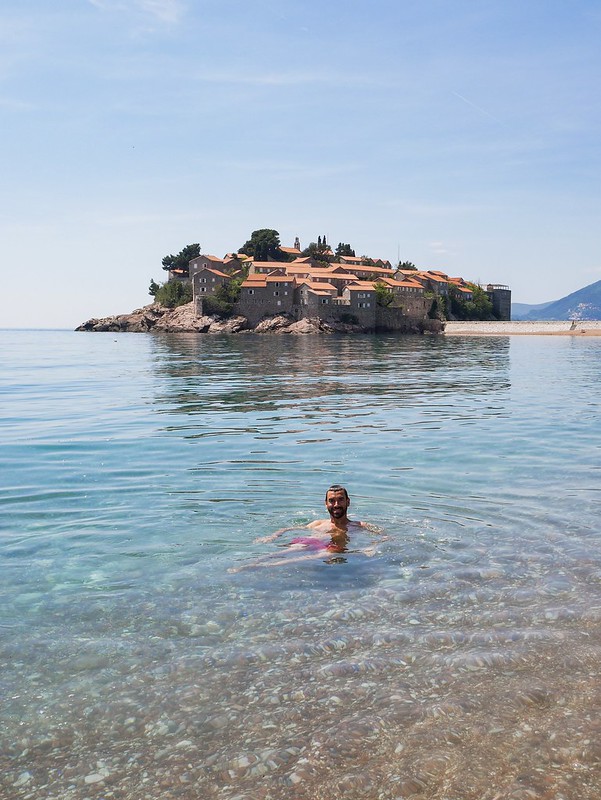 We made our way down to the pebbly beach and jumped into the Adriatic Sea. It was surprisingly warm, in fact it was warmer than Kotor so we wondered if the mountain streams flowing into the bay chill the water down. The beach only had about 20 people spread out across it so it was lovely and quite. In peak season it will be packed with sun beds and umbrellas. 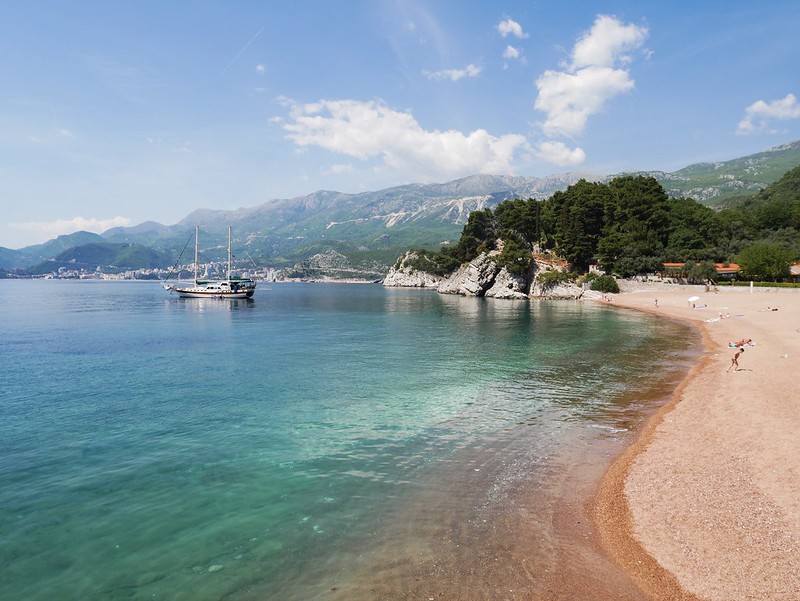 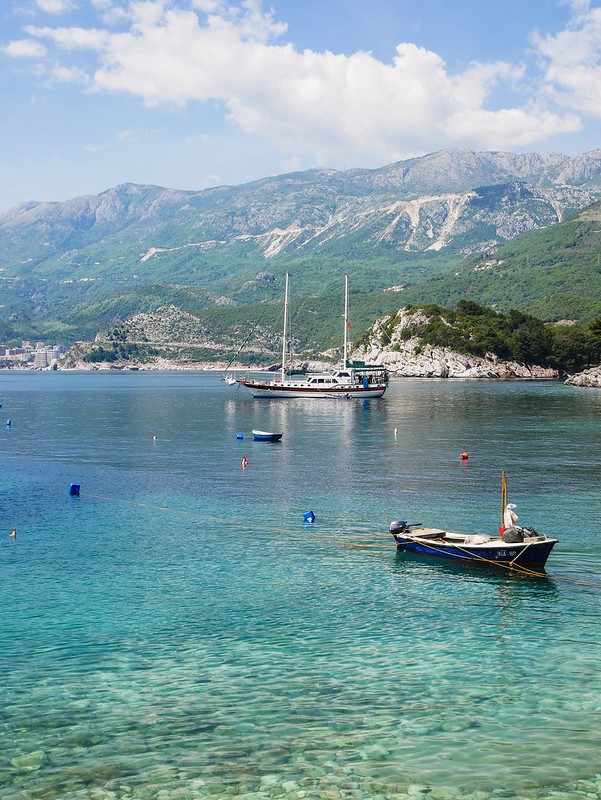 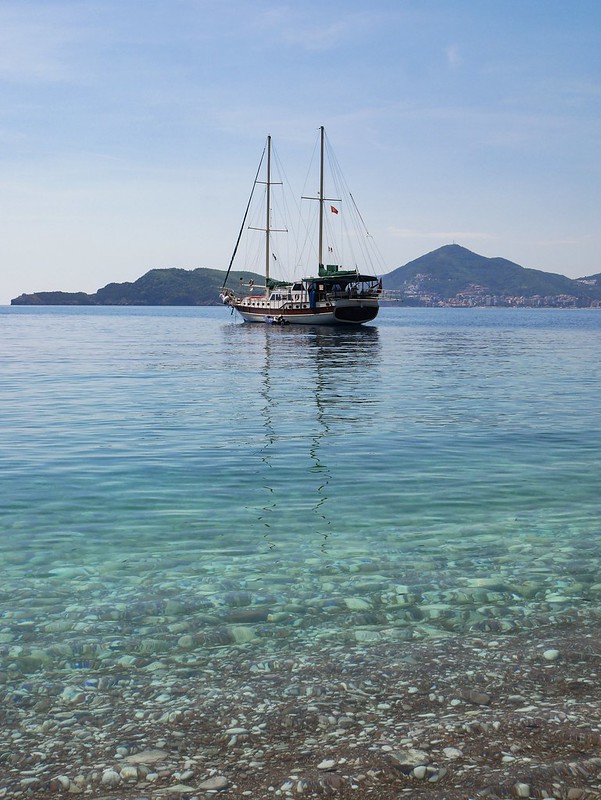 They don’t really have sandy beaches in the Adriatic, it’s more gravel or pebbles which is fine by us as it means we don’t have sand sticking to us the whole time. We took a stroll along the coast as far as Queens Beach which was a beautiful little bay but it was one of the busier beaches so we decided to go back to Milocer beach which had lots of free space to relax right by the twinkly water. 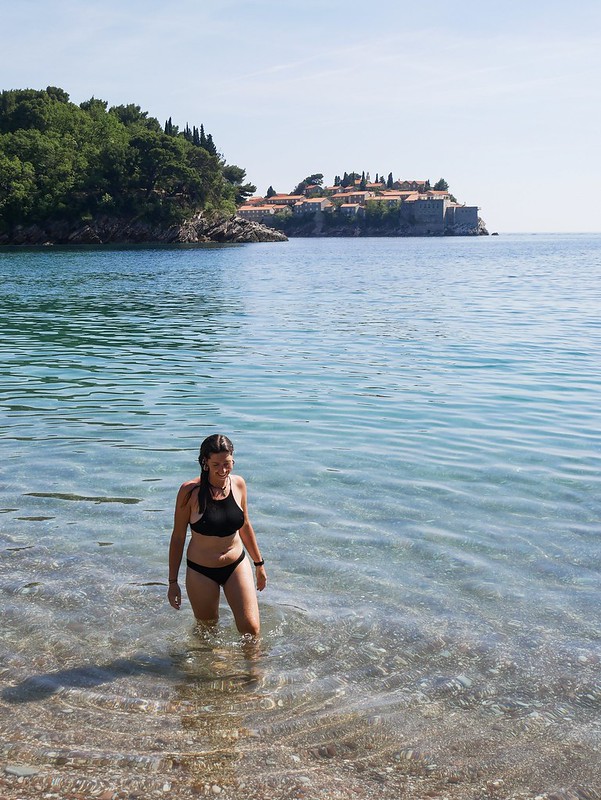 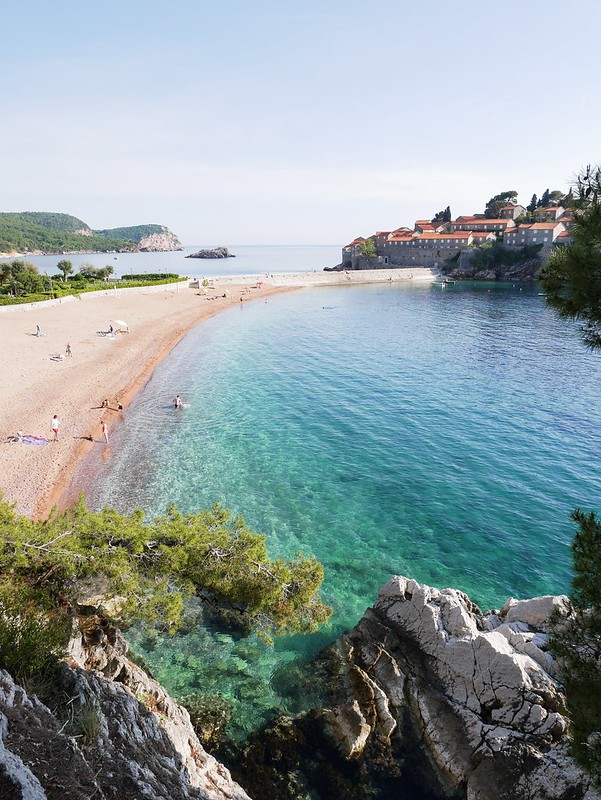 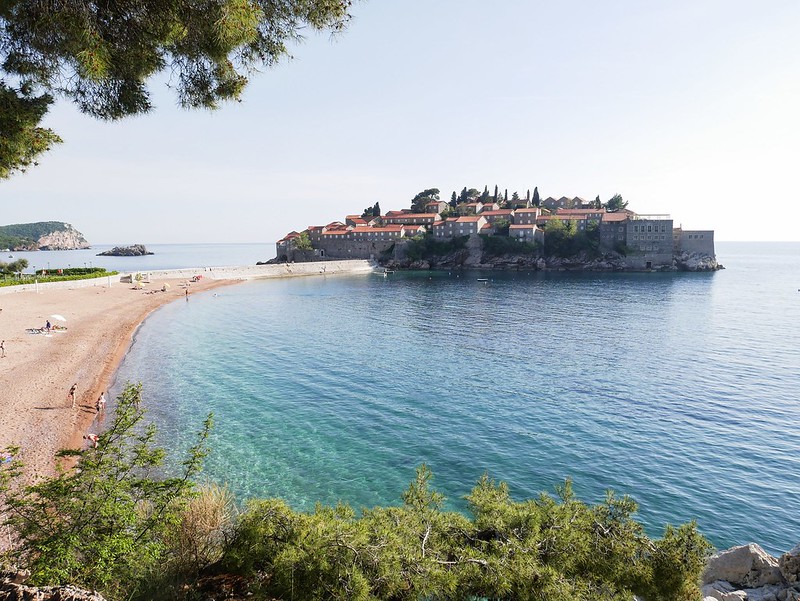 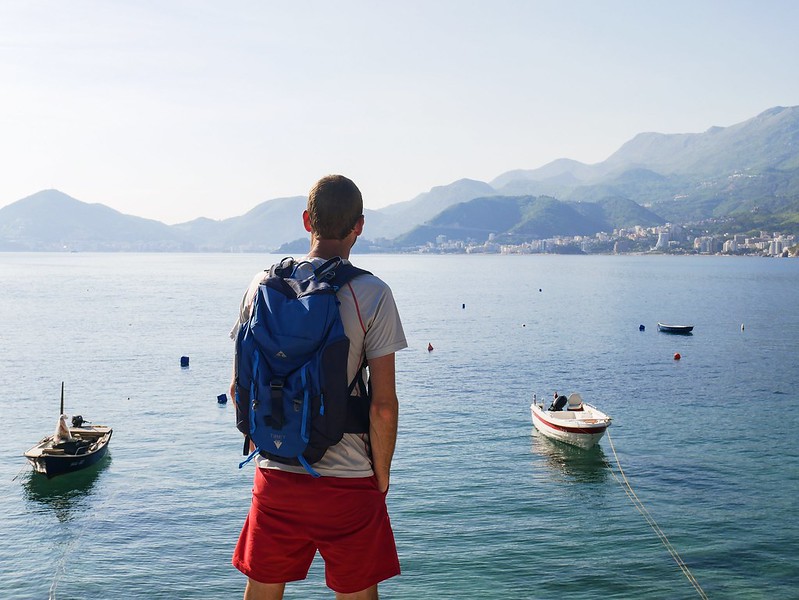 We took an evening stroll into Budva to see the old town which was very pretty actually. The restaurants were busy with locals and tourists and the place had a nice vibe to it. There were lots of eateries selling pizza slices and the staff member wasn’t very patient so I rushed into my decision and picked a bizarre vegetarian one made with black dough. I have a horrible feeling it was dyed black from squid ink…which would be rather ironic for a vegetarian pizza slice.

The next day we just wanted to have a full day at the beach so we made our way to Mogren beach which is said to be one of the best in Montenegro. It’s a double beach separated by a cave that had a walkway through it. We originally walked to the further beach expecting it to be quieter but four young lads decided playing football in front of us was a great idea so we ended up packing up and going back to the first beach where we found a calm spot right by the sea. 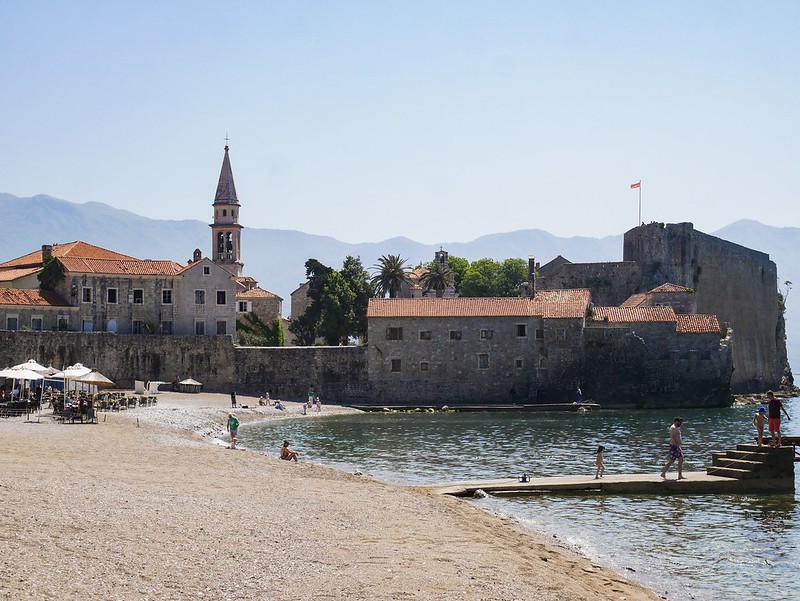 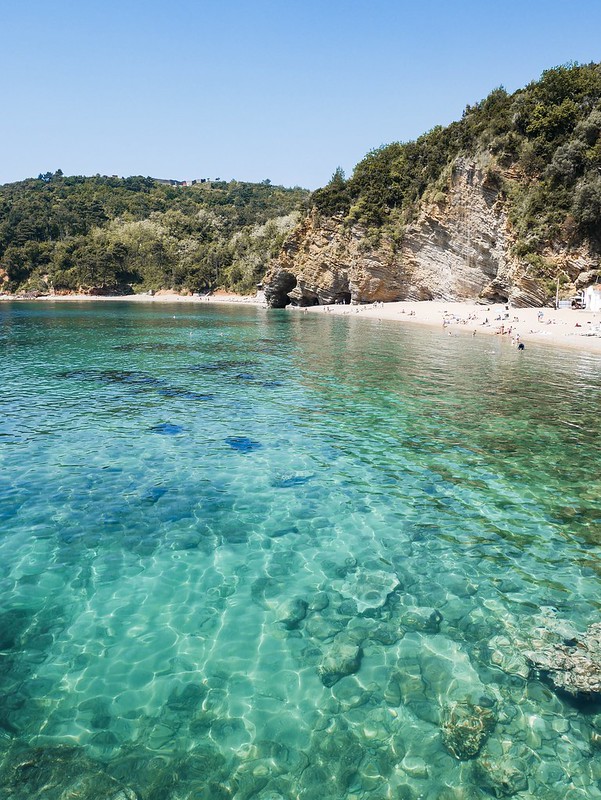 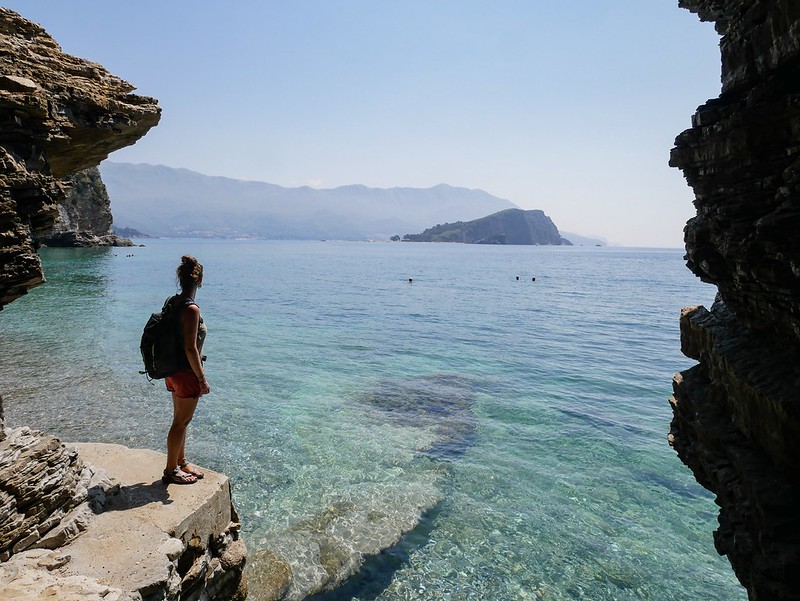 The weather was perfect for sunbathing, about 24° and the water was so refreshing to cool off in. In fact it was so lovely and clear that I swam quite far out as I could still see the rocks below me and didn’t feel like I was swimming over a dark abyss. We liked it so much that we found ourselves trying to reschedule our plans so we could spend an extra day basking in the sun. After all, the rest of this Balkan trip is going to be inland. So we stayed another day in the end and returned to pretty Mogren beach. The coastal walk offered fab views of the old town with a mountain backdrop and usually a layer of cloud hanging half way up the peaks. 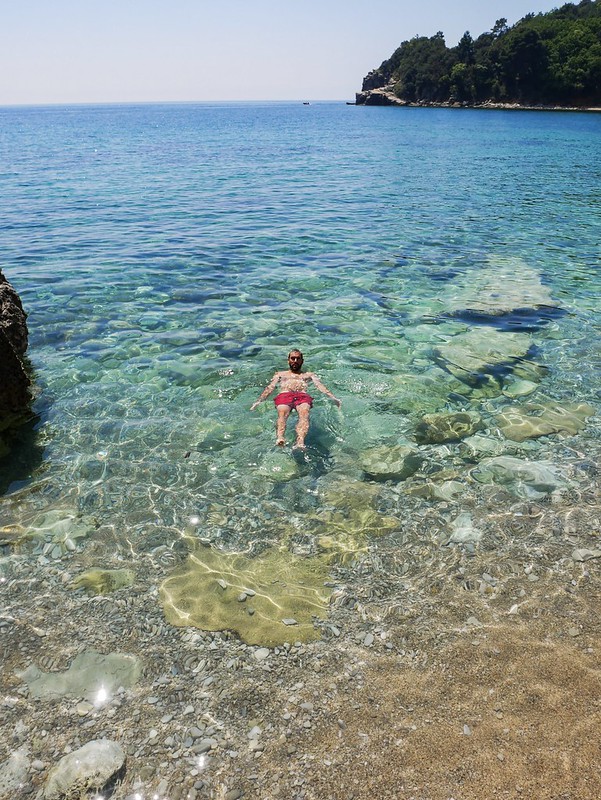 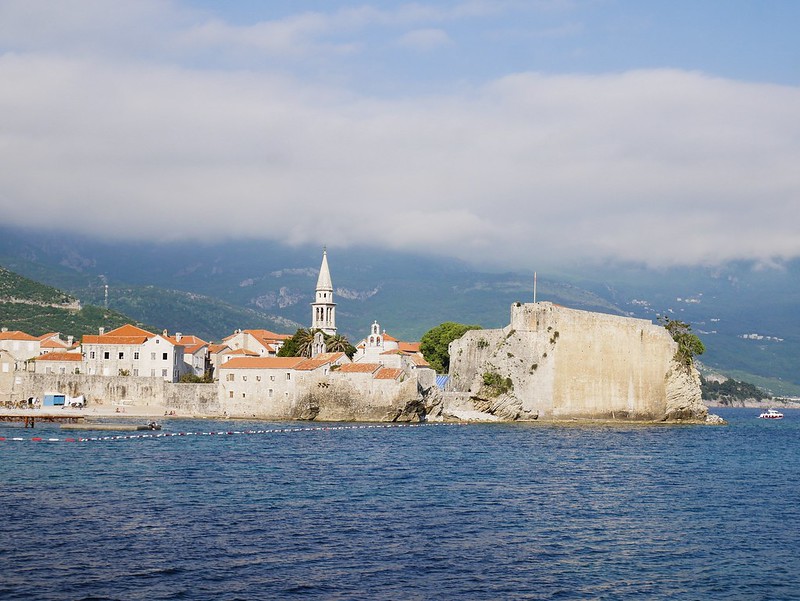 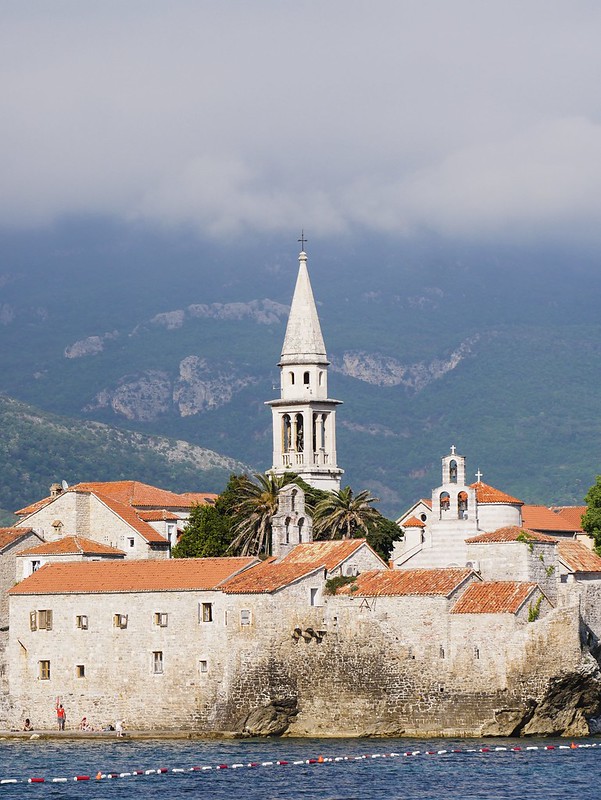 The next morning we caught an early bus to the coastal town of Ulcinj which sits near to the Albanian border. The population is 68% Muslim so the town is dotted with tall minarets and mosques blaring out the delightful Call to Prayer. The town had a good feel to it with coffee shops spilling onto the streets and plenty of eateries. We made our way down to the coast to check out a couple of beaches but they were actually quite disappointing. The water didn’t look clear like the Adriatic usually does, the rocks under the water looked like they were covered in algae and there was a lot of rubbish around the area. But we didn’t let it put a dampener on our day so we bought a Burek which is a Balkan staple of pastry rolled up in a spiral and filled with cheese and spinach. We enjoyed our little picnic on a rock by the sea and then made our way into the old town. It was quite small but very pretty with plenty of sea views from the fortified walls and restaurants. 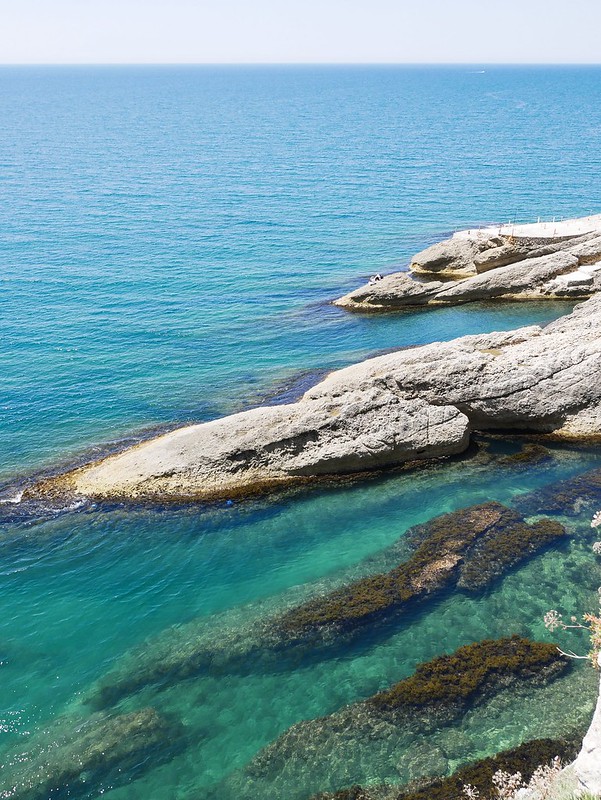 Ulcinj is said to have some of the best beaches in Montenegro but I don’t agree with that statement at all. The reason they’ve been given the title is because it’s home to the only sandy beaches in Montenegro, in fact in the whole of the Balkans! One of the beaches is 13km long and there’s a smaller one right in front of the town. To be honest we didn’t rate the town beach, the sand was brown so you couldn’t appreciate how clear the water was. So we grabbed an ice cream and began walking along the coast in search of a better one. The shoreline gradually lost its sand and became very rocky so the locals made man-made concrete platforms to sunbath on instead. We found a perfect spot where there would normally be a bar open but as it’s still the low season it was closed and we could use the sunbeds for free. The sea looked very inviting with a deep, crystal clear section which we were able to jump into from the rocky ledge. We spent the rest of the afternoon basking in the sun before making our way back through the town and treating ourselves to a takeaway pizza from a bakery. For just €4.50 we got a huge wood fired pizza which we thought was great value. Now it’s time for us to make our way to Albania! 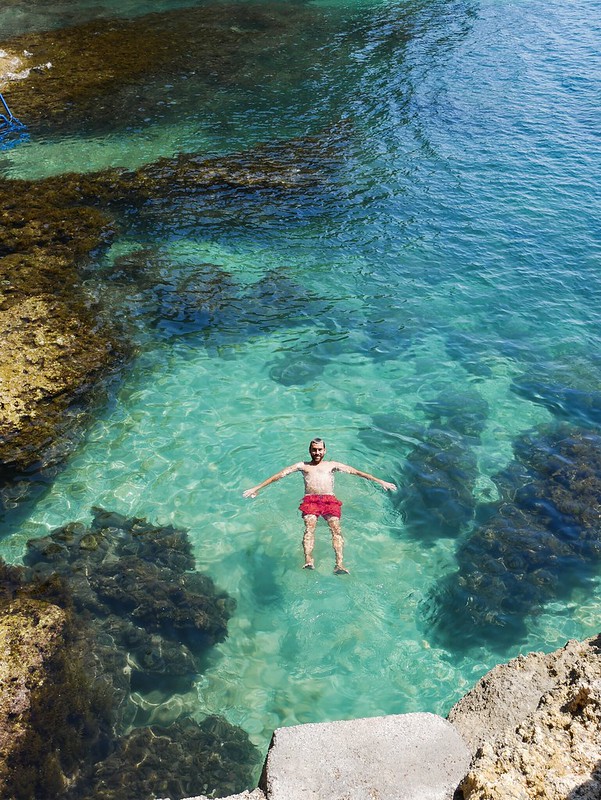 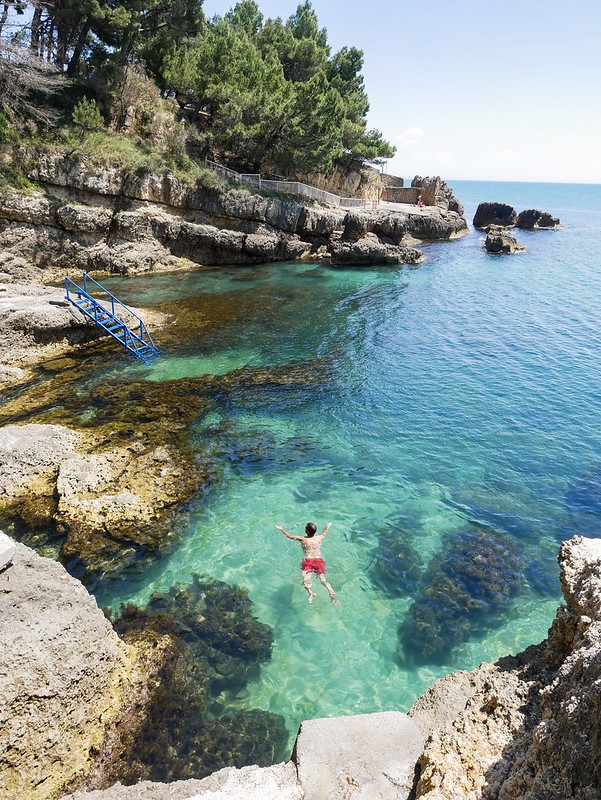 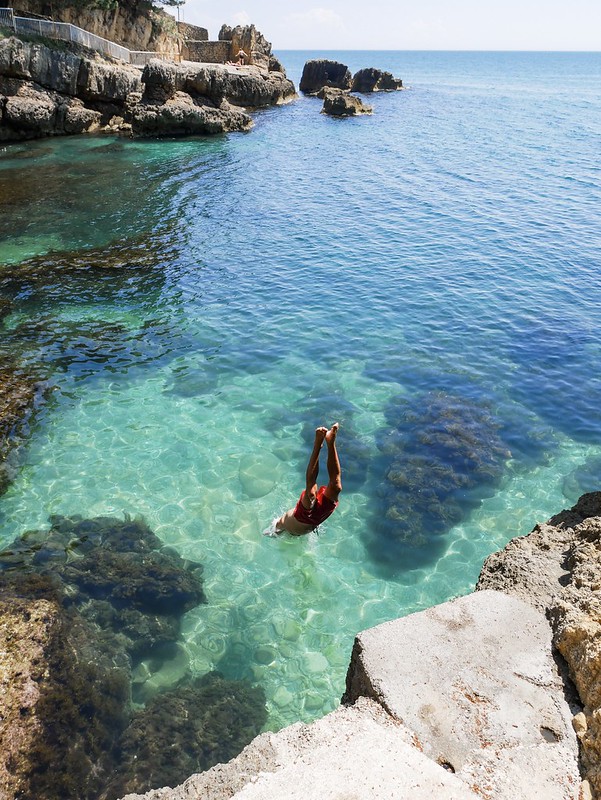