We woke to blue skies and the sound of birds tweeting outside our van. It was another beautiful day so we set off on a drive until we were just a couple of kilometres from the French border. We were the only vehicle parked up for the hike up the Barrosa valley. The weather has made it tricky to judge what to wear in the mountains but so far we’ve managed all our hikes in sandals so even though it was a chilly start in my puffer coat and hat I knew it would warm up quickly. Our sandals seemed like a bit of a poor choice when we started having to walk across slabs of snow covering the dirt track. We were able to carefully step on top without any snow touching our feet but the further we walked the snowier it became. We were really surprised, it was totally snow-covered at 1600m elevation which was odd because the past three days we’ve hiked up to 1800m with practically no snow. 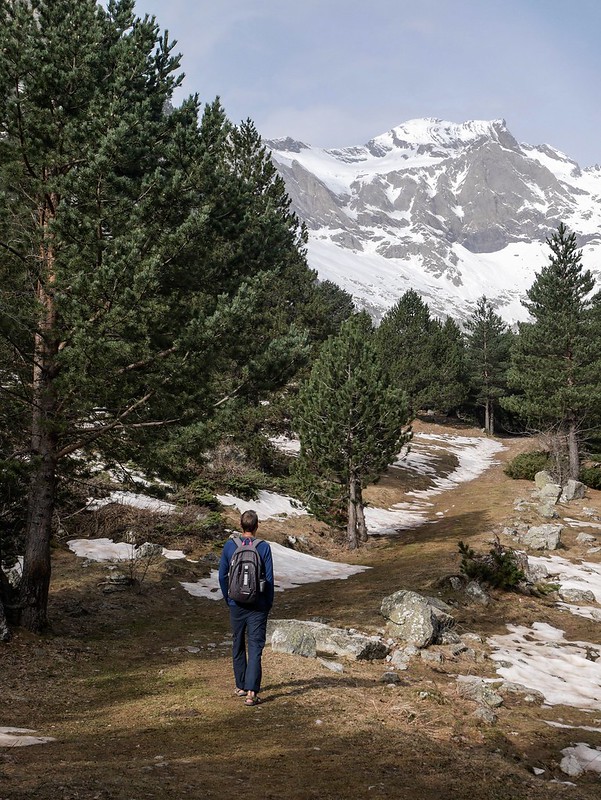 We figured because we were walking through the forest it must be very shady and hold the snow for longer but as we made our way to the back end of the valley where it all opened up we were just surrounded by a blanket of white snow. It was really beautiful but definitely not the green pastures I was expecting. Snow gradually started sprinkling over my sandal and under my toes and occasionally the snowy ground would totally give way, causing my foot to sink a foot down into the icy depths. We had planned to hike to the Refugio but with just 800m to go we decided it was best to turn back. My feet were starting to get cold and the faster I walked the more snow would seep in. To give you an idea of how cold my feet became I slipped on a rock while crossing a mountain stream and the water felt warm. It was ice cold but compared to the slush puppy mix that now covered my soles it felt delightful so I ended up dipping my toes in the river whenever we were nearby. Luckily it was just a 9km hike with little elevation gain so once we passed the snow line we thawed quickly. 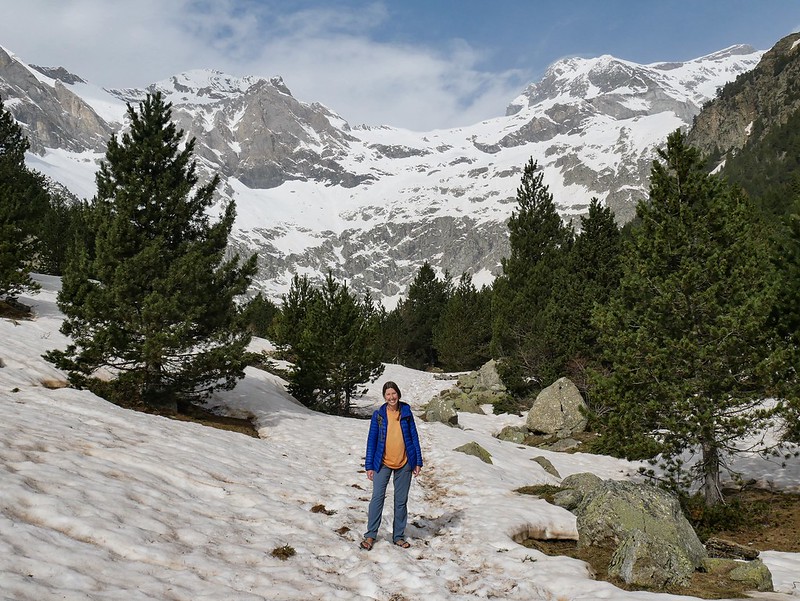 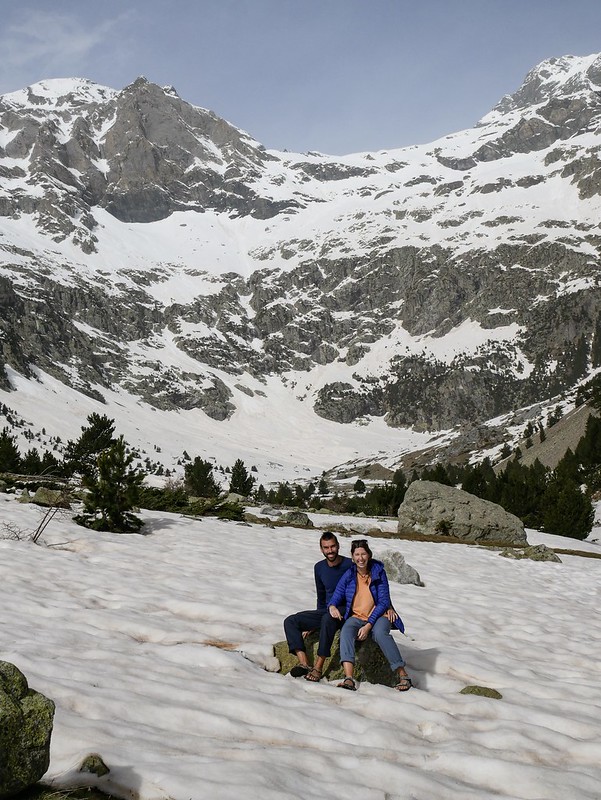 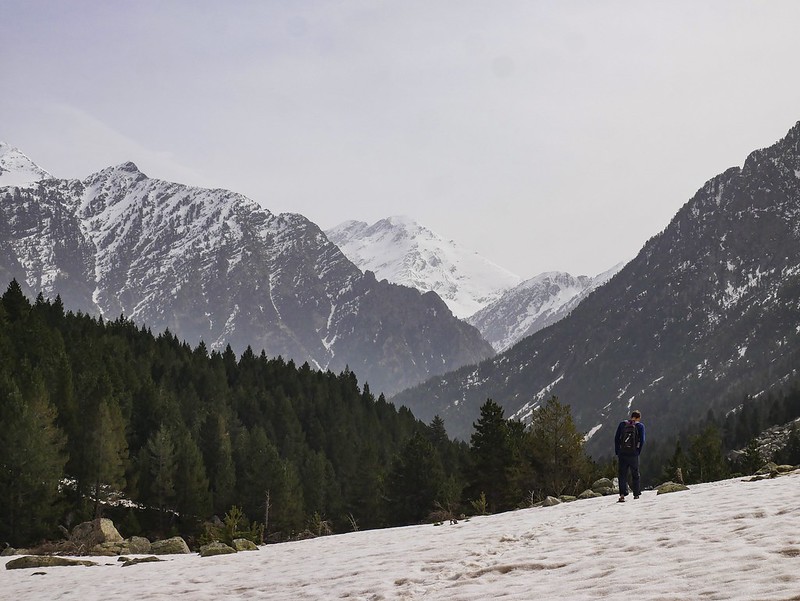 After spending the morning hiking in the snowy mountains at 1600m altitude we left the highest peaks and made our way down the valley to 600m elevation. Suddenly it was positively balmy so we had to change into shorts and a T-shirt before we began our hike up to Muro de Bellos, an abandoned village. A steep, wiggly road led up to the top but we decided to let Helga relax and hike up instead. Luckily there were short-cut paths through the woods so we didn’t have to follow the road. We saw so many caterpillars along the trail, they’re extremely poisonous and nest in spiderweb looking balls in the pine trees. Once they leave the nest they all join up in a long line, I’m not sure why they do this, maybe it’s power in numbers but judging by the long splatter marks along the road it seems to be a quick way to achieve group suicide. It’s bizarre to witness as sometimes there can be hundreds of them and the line can be over 10m long. 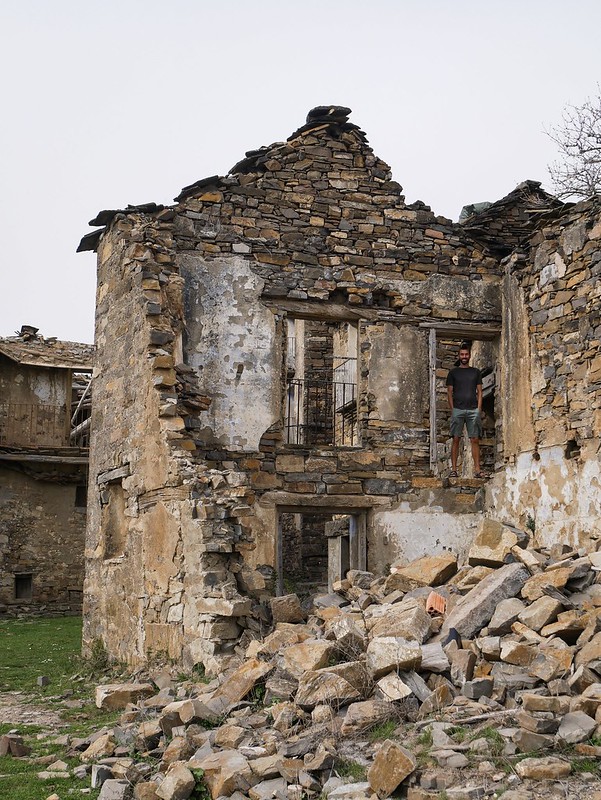 The village wasn’t very exciting, it just had a few crumbling buildings and we weren’t allowed to enter any of them but to be honest the village was supposed to just be a bonus as the main draw card for this hike was the mountain view it offered. Sadly the weather turned really hazy and it ruined the views but as we descended the mountainside the sun came out and the haze began to clear which meant we got a fab view of Peña Montañesa, a huge rocky mountain that dominates the valley. There were lush green pastures below the peaks and the only thing missing were cows with big bells dinging around their necks. 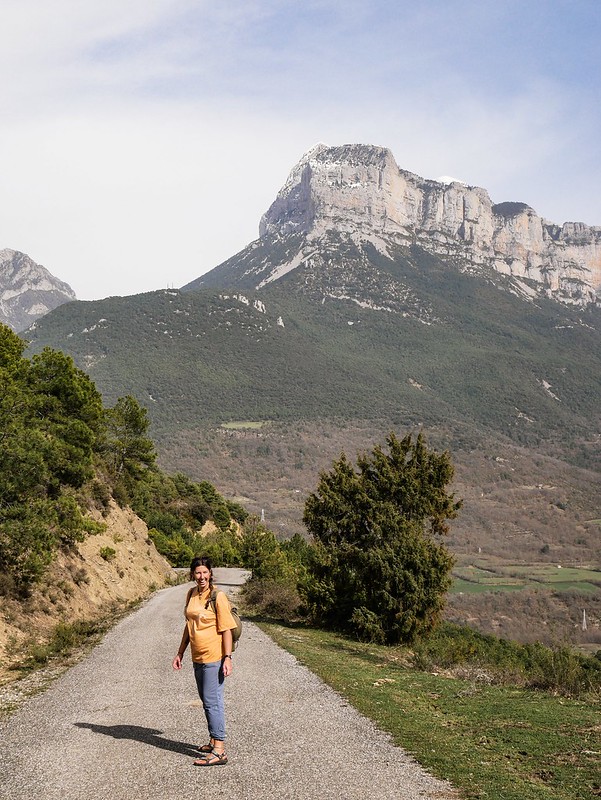 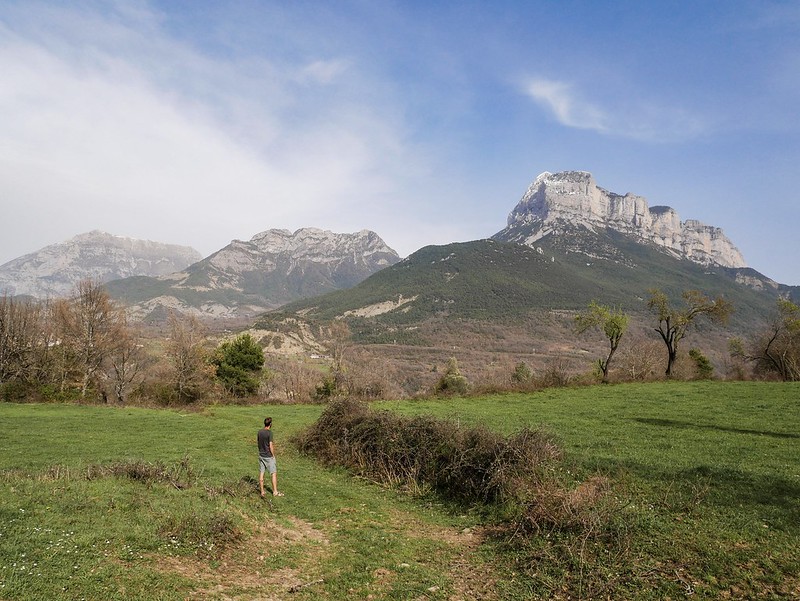 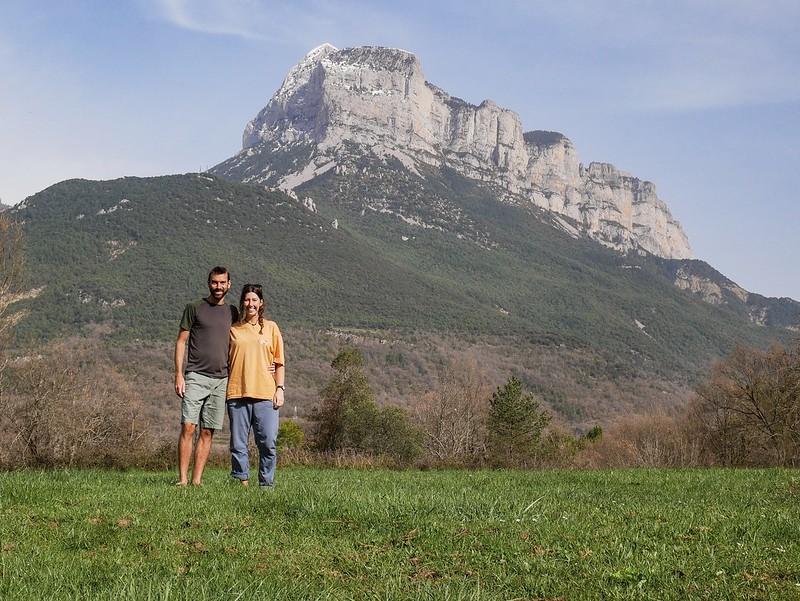 I managed to find a lovely spot to camp near a Roman bridge that had a crystal clear stream flowing beneath it. It was already about 5pm but with the sun out it felt warm enough for us to have a quick dip. It was pretty cold so I was easing myself in slowly but the ground was slick with algae to I ended up slipping in which was rather effective. 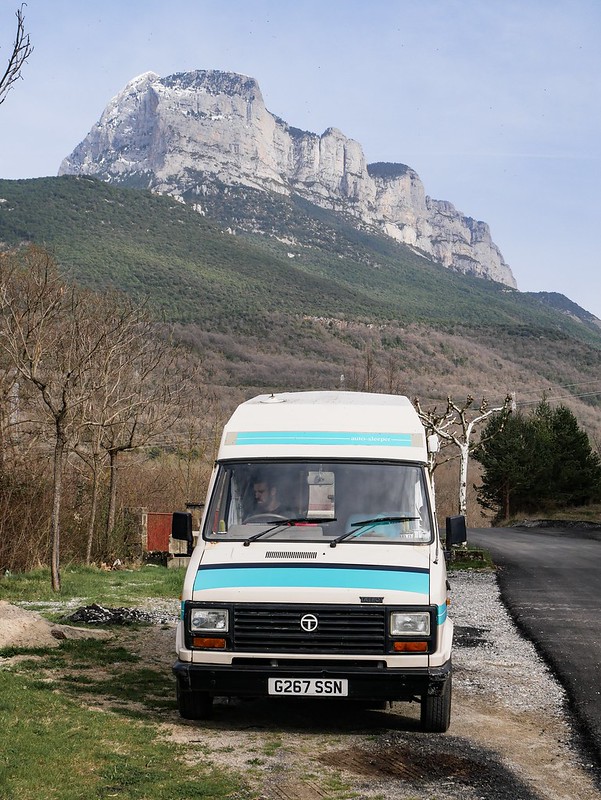 The next day we drove to the western side of Ordesa y Monte National Park. On the way we stopped in the cute town of Broto where there was a short walk to Cascada de Sorrosal waterfall. I didn’t know what to expect but it was really impressive with two tiers gushing down the mountain side. The grandness of the falls became even more clear when Craig clambering his way towards the base and stood on a rock in front of the waterfall. 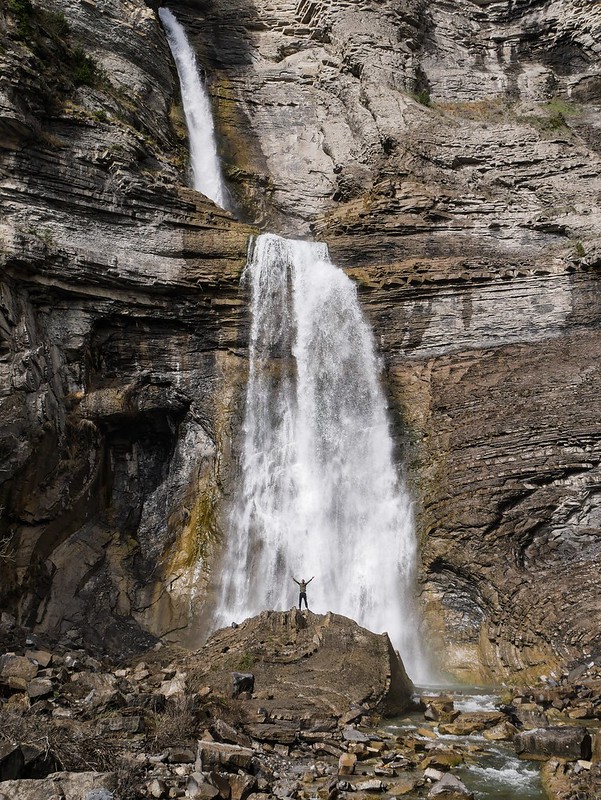 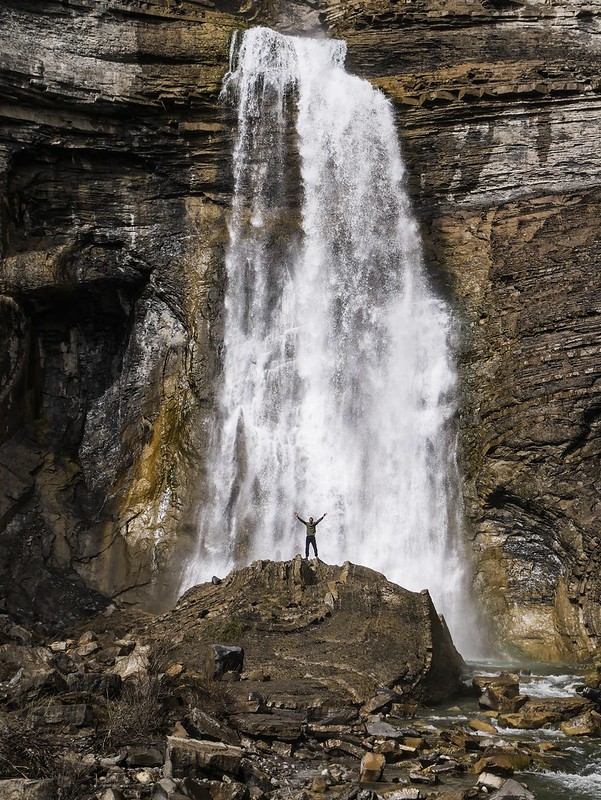 Further up the road was Torla-Ordesa, the gateway into the national park. The village was built atop a hill and we got a great view of the church with a dramatic mountain backdrop. We walked around the little village and up the road a bit for a view of the giant slab of mountain ahead of us. I couldn’t believe how hot it became, I was wearing jeans and found it totally unbearable but of course as soon as we decided to park up in a nice spot and sit outside it clouded over and the wind picked up. On the plus side we had a phenomenal view outside our window and when we woke up the next morning it was even better; A low layer of cloud was drifting through the valley with the mountain tops poking out the top. The clouds were moving around so fast like smoke on a windy night. 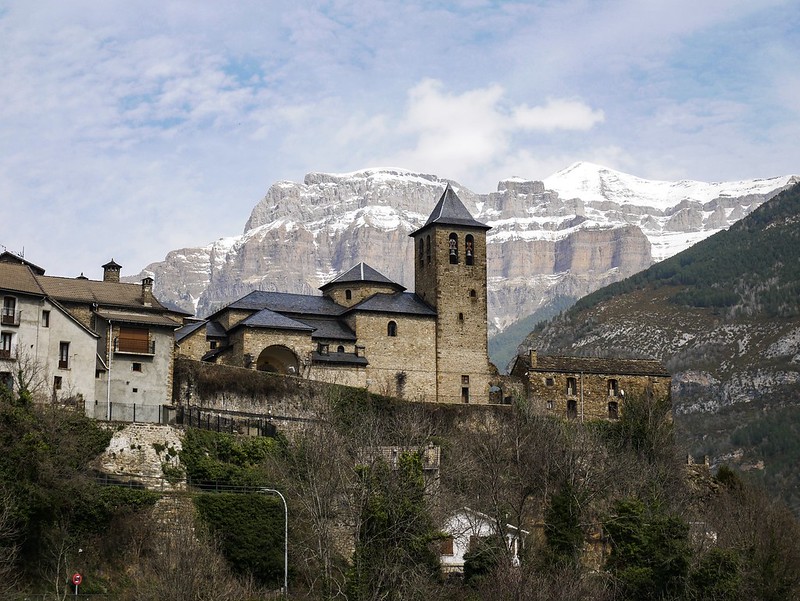 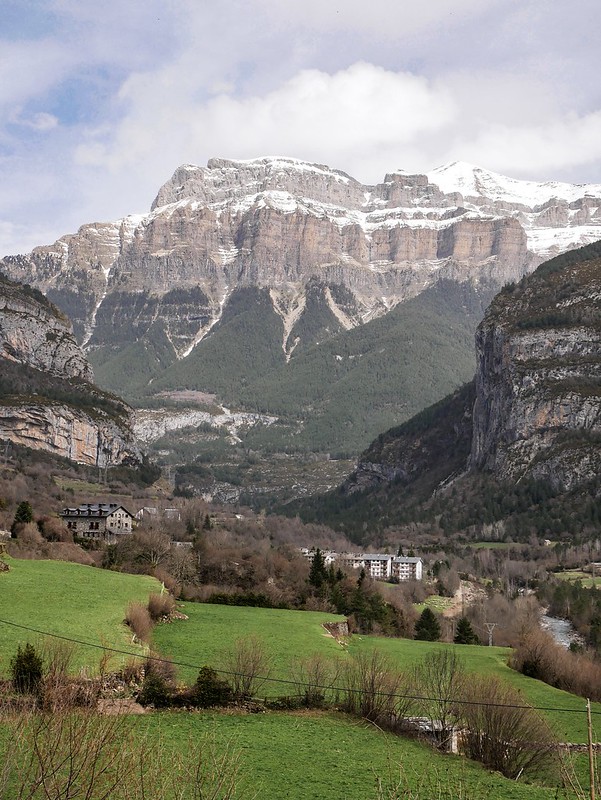 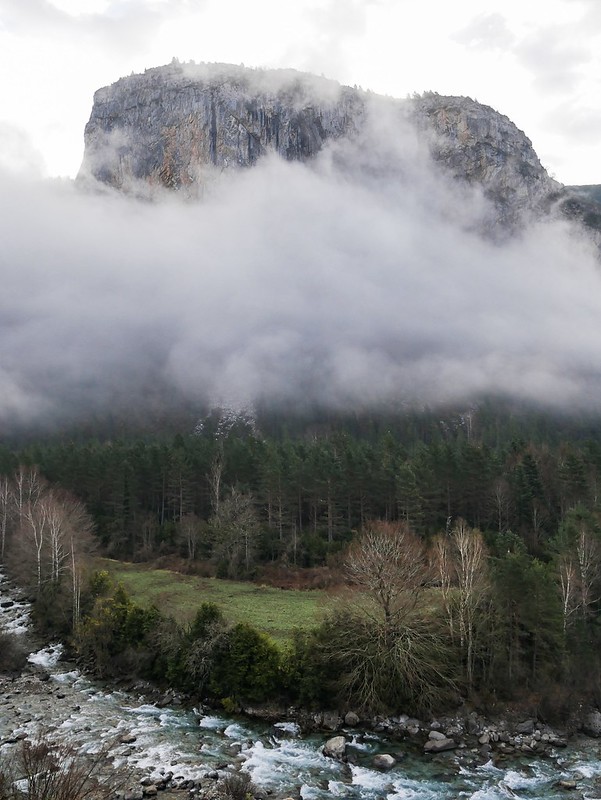 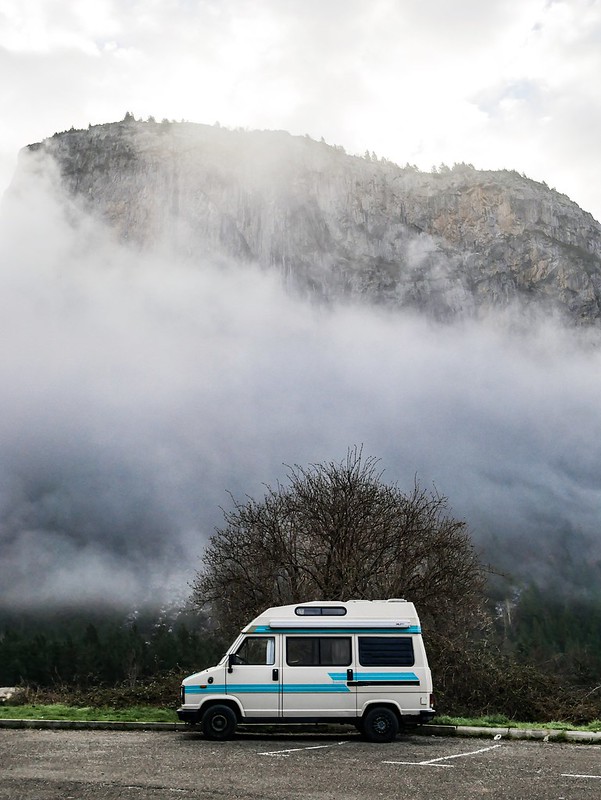 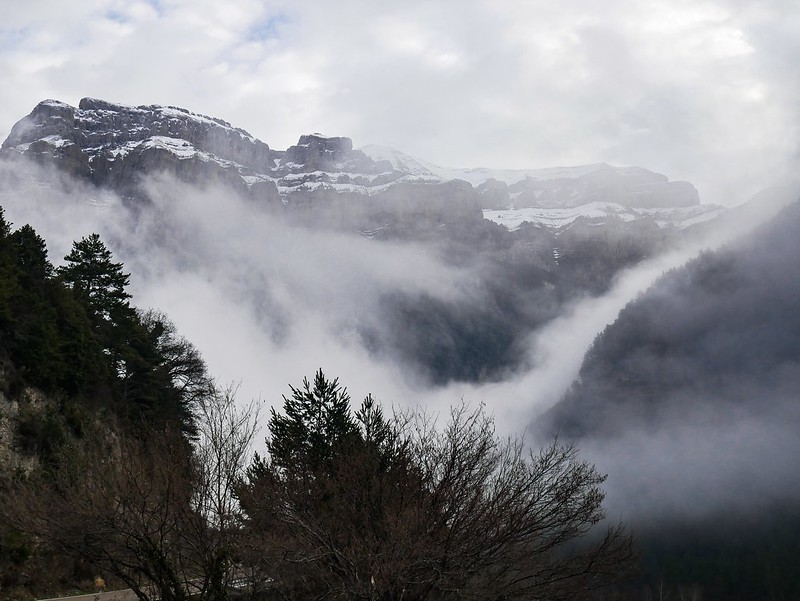 The cloud soon burnt off and we were left with much nicer weather than predicted. The main hike in the park involves driving 8km up a steep road into the valley but we didn’t fancy taking Helga along it and we also weren’t feeling up for an 18km hike after pushing our bodies lately. So instead we took a leisurely stroll up the road which offered great views up the valley. It was more like a canyon than mountains with lots of sheer edges and the river below us. 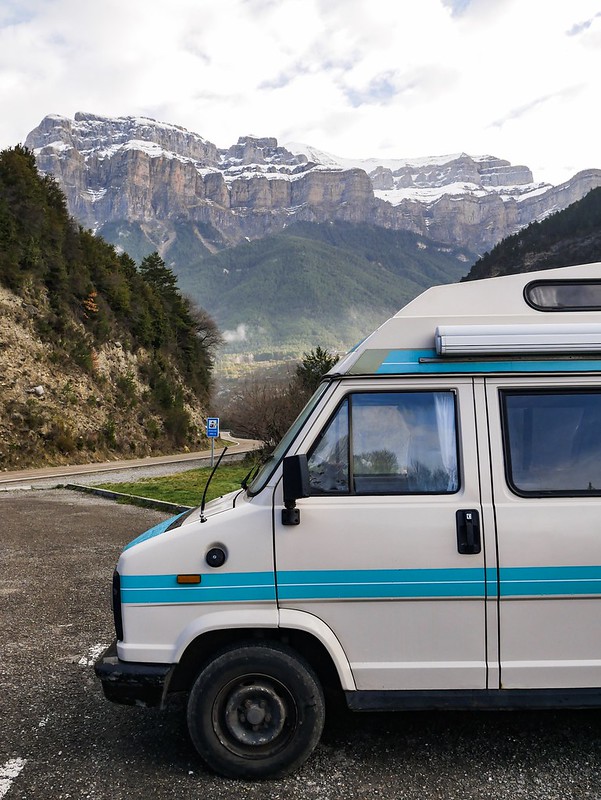 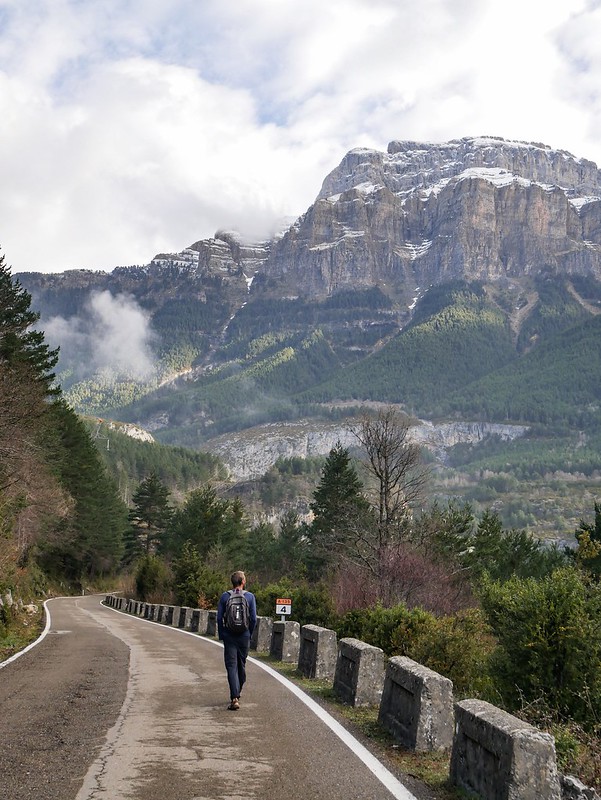 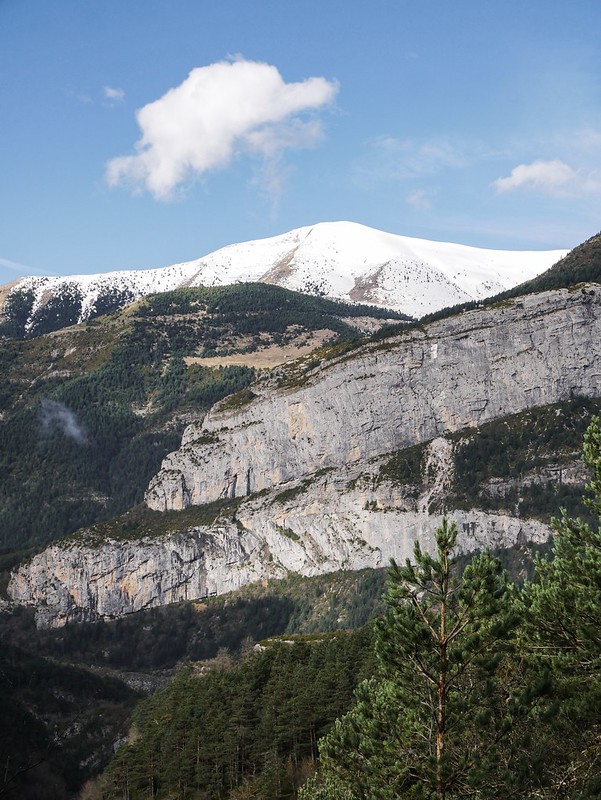 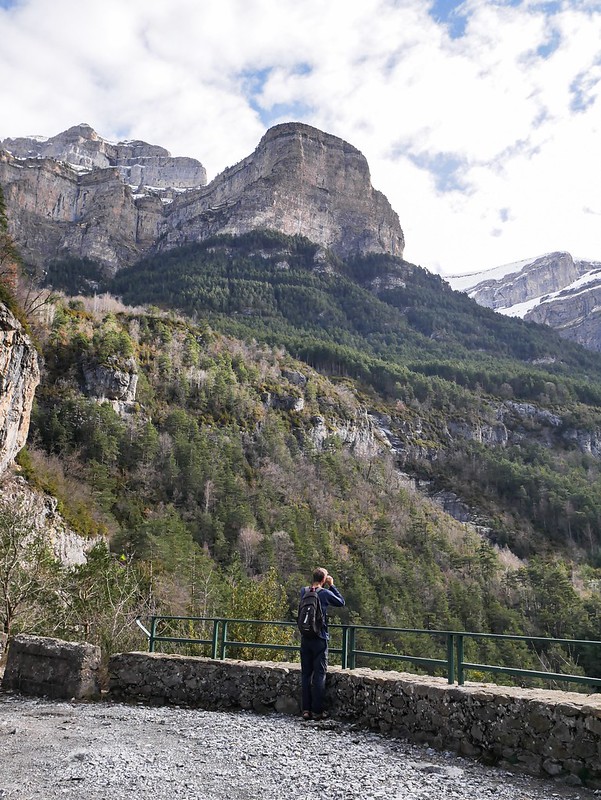 Craig suggested continuing up and walking back a different route but I was sceptical. We hadn’t planned for a long hike so didn’t have enough food and we weren’t a hundred percent sure if the path existed or if it was a discontinued route on my map. So we played it safe and headed back with the plan to take a shorter unknown route uphill to gain some elevation. We followed a trail through dense forest but it soon began to look more like it was made by a pig digging up the ground rather than a human. Somehow we weren’t on the correct route according to my map but there hadn’t been any turn offs so we were a little confused. Craig went ahead to see if the route opened up at all but all he found was a wild boars skull so we took that as our sign to head back. Ironically it was when we left the forest and arrived on the grounds of a closed hotel that we got the best view of the day with mountains rising all around us. So we stopped for a cup of tea to enjoy the view and then we made our way back to Helga, this time on a lower route beside the clear blue river. I noticed some violets growing and it was just this morning that I’d seen a video of someone eating them so I gave it a quick google to be sure and the sniff test really confirmed it, they smelt just like palmar violets. So we got a good boost of vitamins on our walk back. 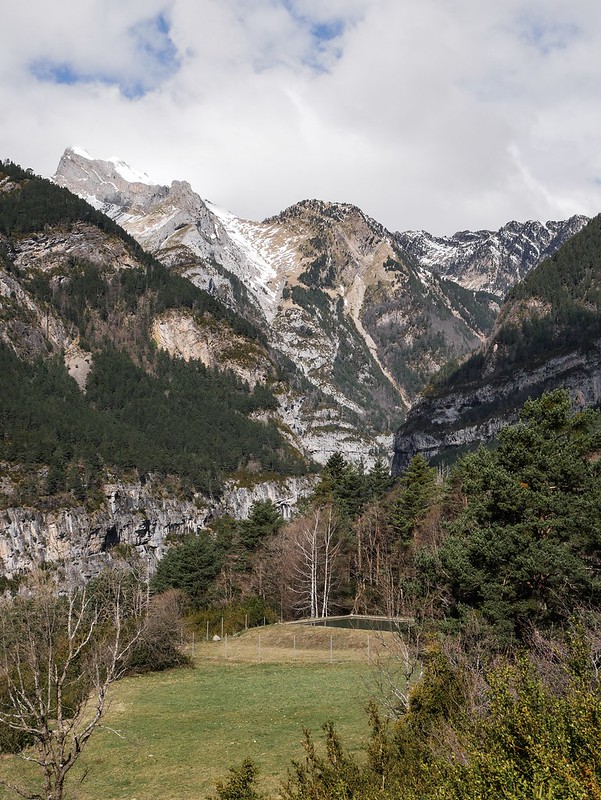 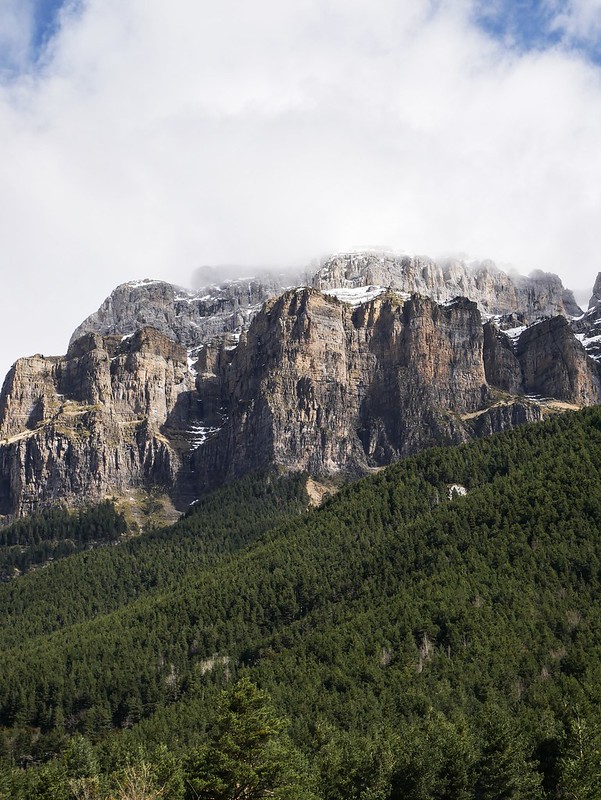 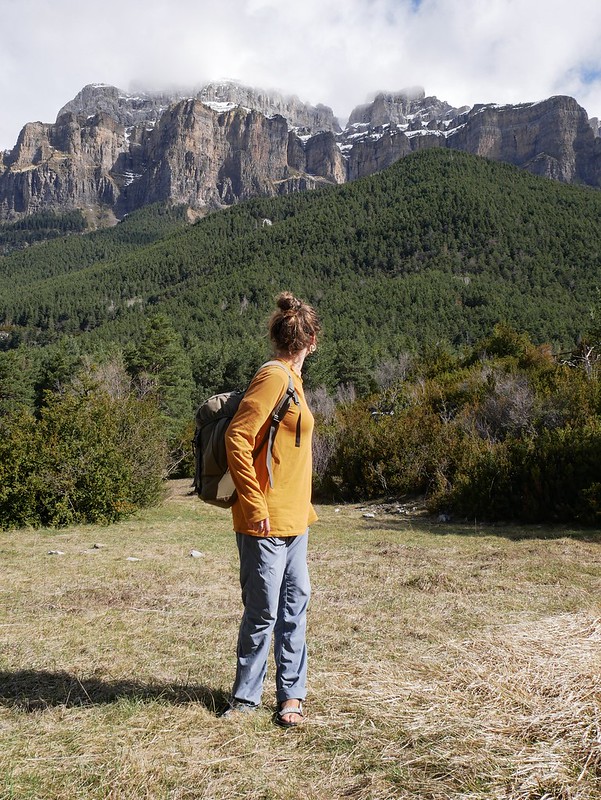 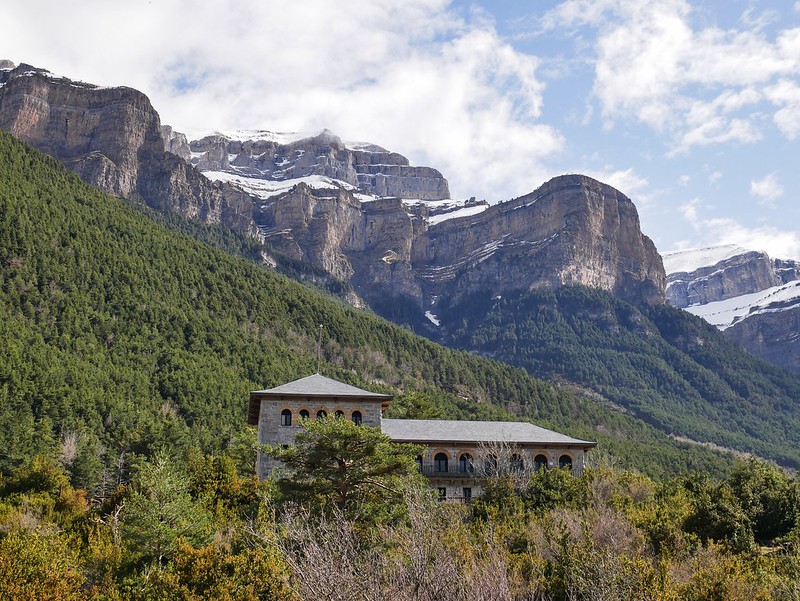 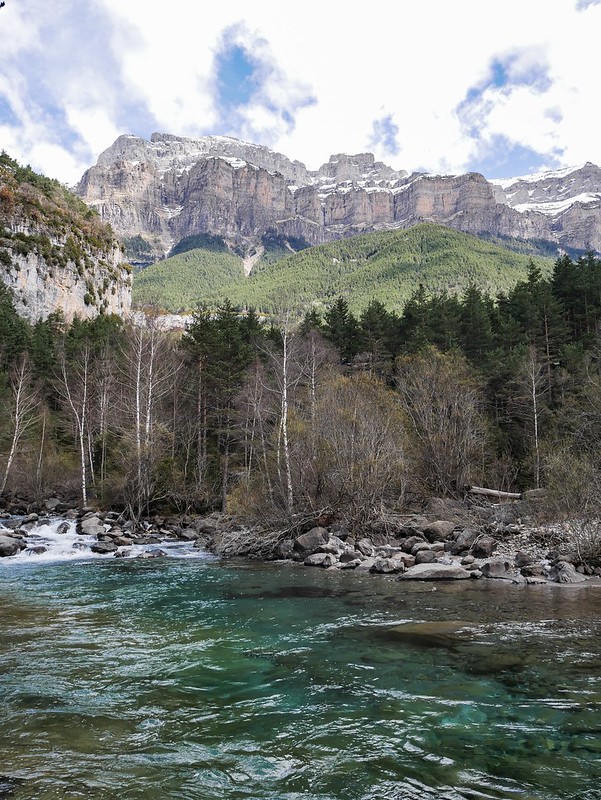