The Pyrenees form a natural border between Spain and France and they remain snow covered until mid June. We weren’t sure if it would be a pointless detour in early April if the routes were inaccessible or roads dangerous, but we decided to give it a go. The first hike we did was up to 1800m and we didn’t come across any snow which means we’re safe to head further into the mountains, hooray! We started off with a very scenic drive up the Pineta Valley which is one of the entry points into Ordesa y Monte Perdido National Park. Soon after leaving Bielsa we passed a small lake where the snowy peaks were reflected in the shallow waters. It was such a beautiful area with mountains towering high above us. We drove all the way to the end of the road where there was a large carpark and a jaw dropping view of the mountains. 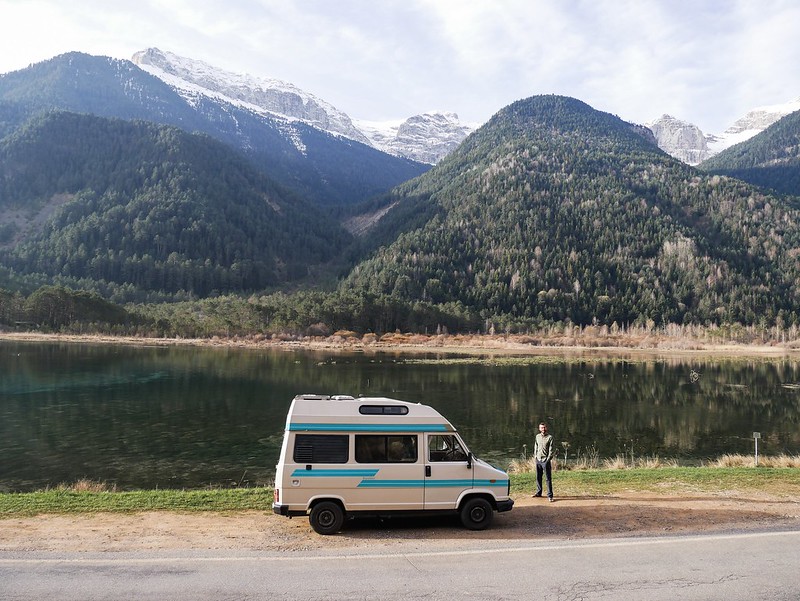 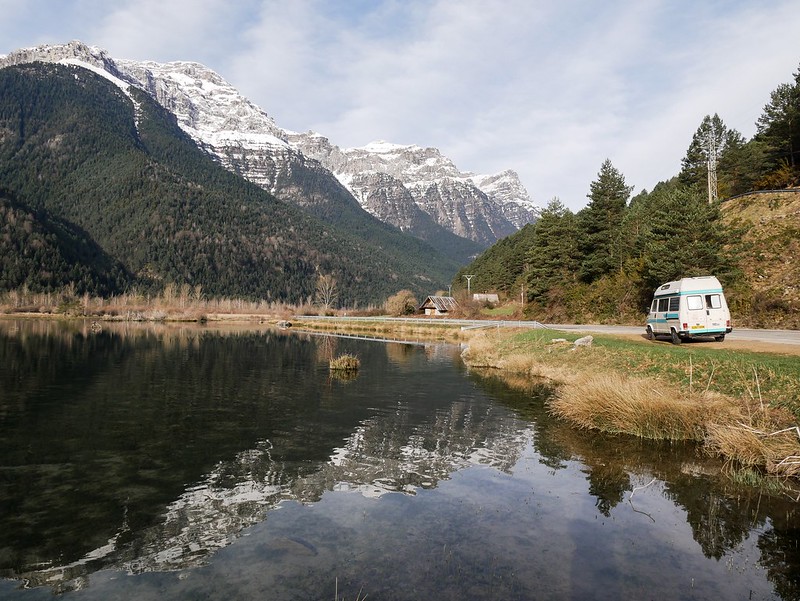 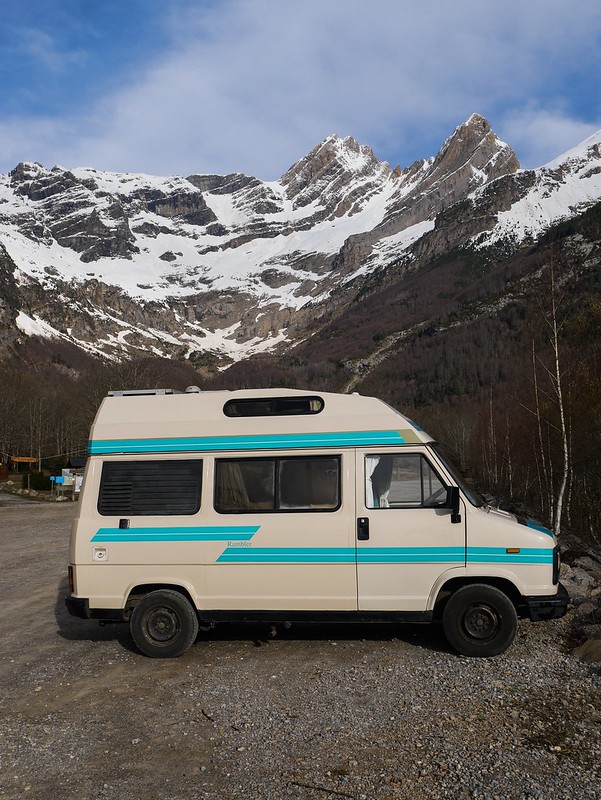 The ridge-lines along these high peaks mark the border with France, an area we’d love to hike but that won’t be possible on this trip as it looked very wintery up there. We had breakfast in the car park with the fab view and then we set off on the Llanos de la Larri hike. We followed a steep track through the forest which was quite exhausting but after just 45 minutes we were standing in a wide valley covered in pastures. Our trail was leading us through the Llarri valley to a gushing waterfall at the end. It was so nice to be out the forest and have open views all around. My only negative points would be that the grass was more beige than green and there weren’t any animals with dinging bells grazing the land – I’m a sucker for lush green pastures with free-roaming cows. Instead we got a dead cow, decomposing on the ground. There wasn’t much left of the poor thing except for some leathery skin pulled tight across it’s rear and a slightly furry head with little horns poking out. 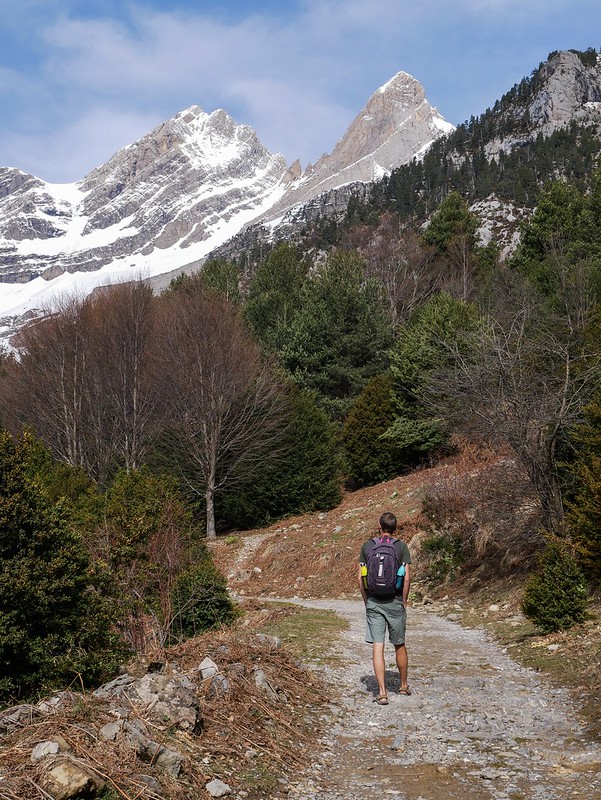 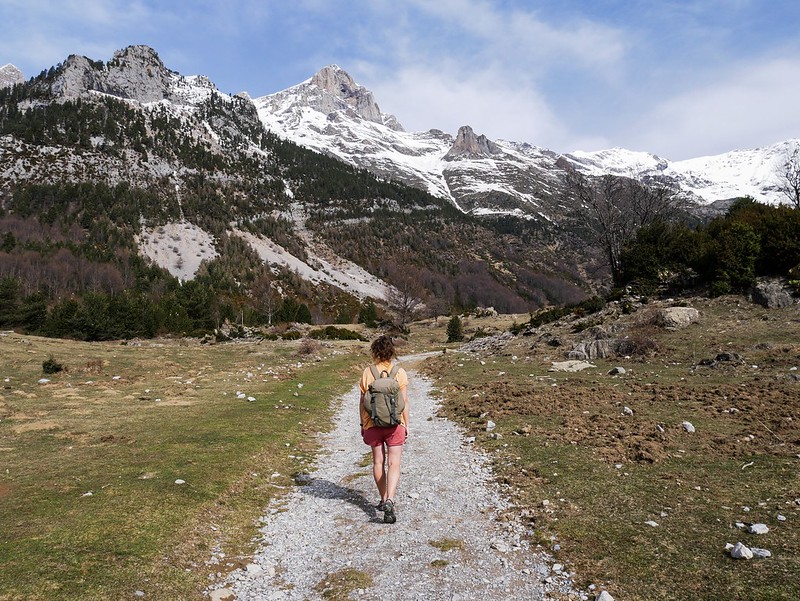 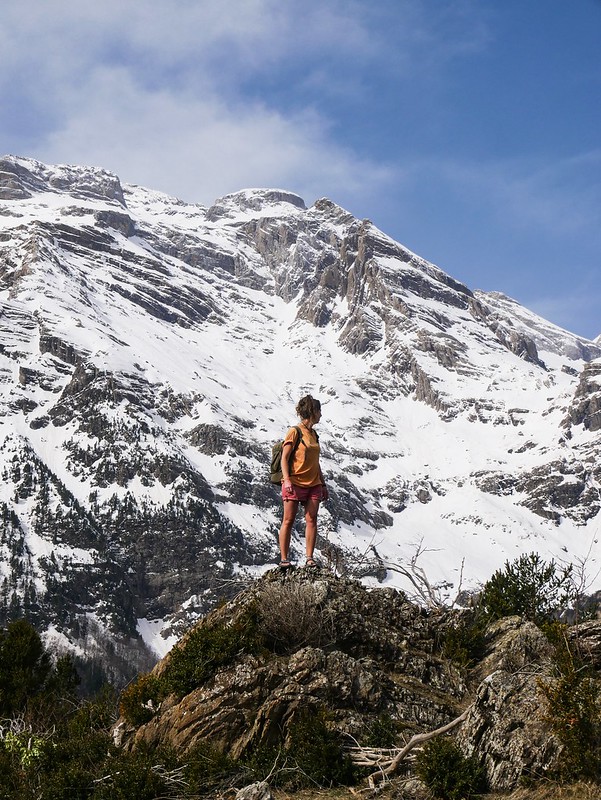 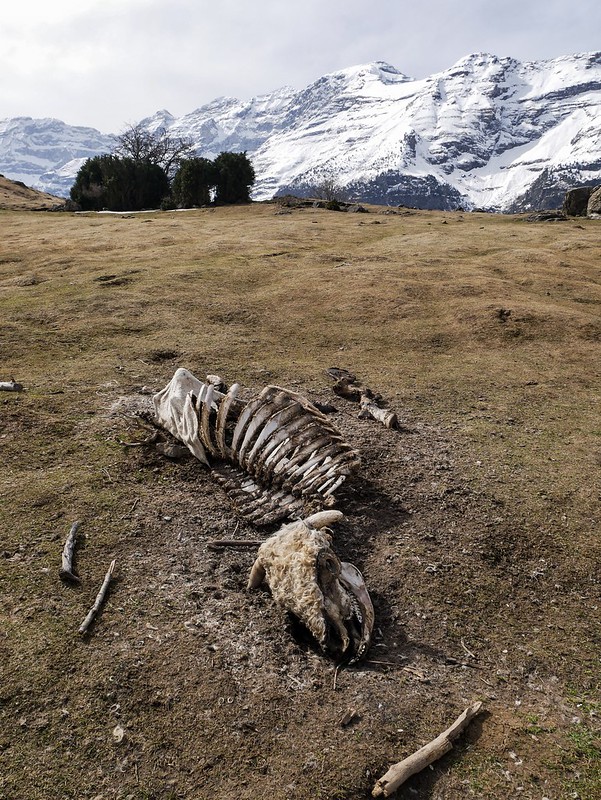 The weather was much nicer than predicted so we were surprisingly warm and feeling quite smug about our outfit choice. We’d both opted for shorts and sandals which got the locals talking – who were all in winter gear including wool hats! One old couple commented something in Spanish we didn’t understand but we recognised the word ‘frio’ which is cold so we said in broken Spanish that the weather feels warm because we’re from England which had them giggling before they waddled off in their snowsuits. 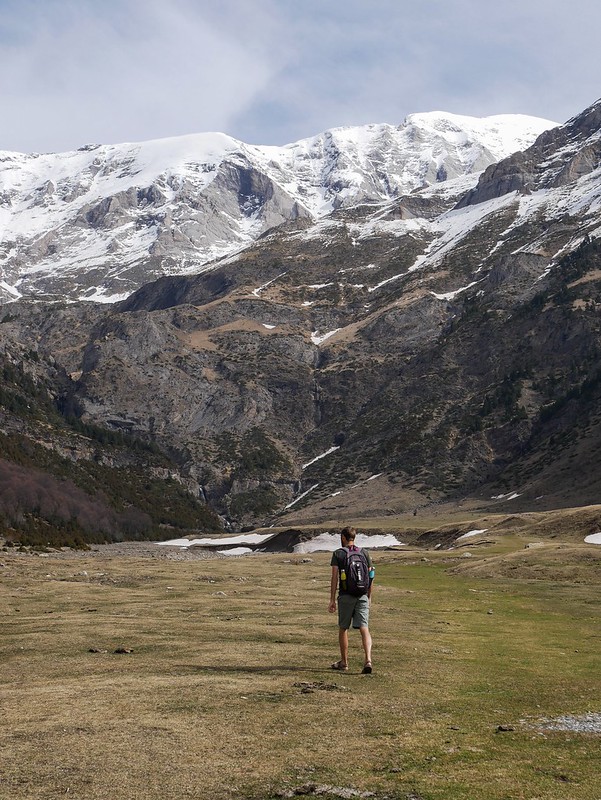 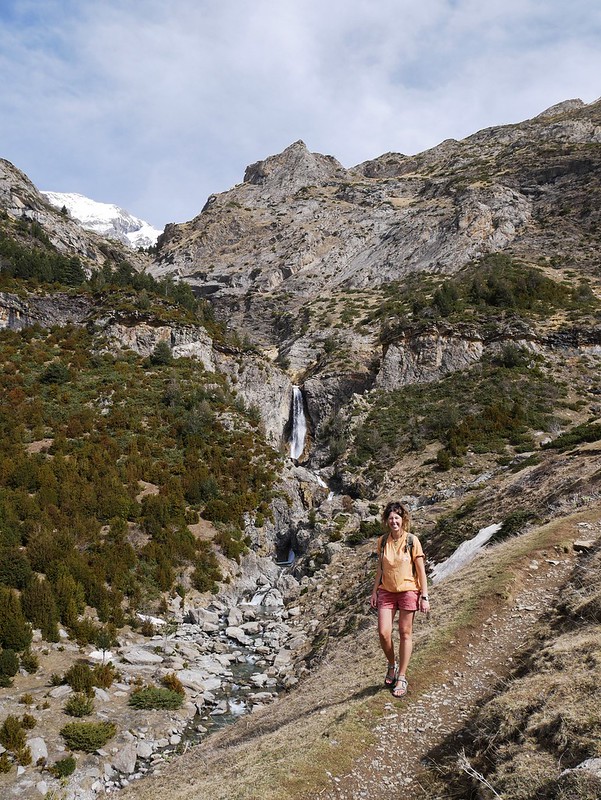 The mountain scenery was really spectacular with a huge mass of snow-caked peaks behind us and a few really pointy ones on the border. The valley was only about a 1km long and it ended in a cirque with mountains all around us and a waterfall plummeting down into turquoise pools. After exploring the pools we decided to take an unknown track further up the mountainside. It was a much less trodden route but I had it marked on my map incase we were confused at any point. We ended up climbing up an additional 300m altitude when we decided the views had got to their best. To be honest we didn’t gain much from doing the additional hike and it was quite challenging in areas as we had to walk across long, dry grass which was basically like slippery hay. There were also some slabs of snow we had to carefully shuffle behind but hey, we had a pretty idyllic lunch spot all to ourselves. 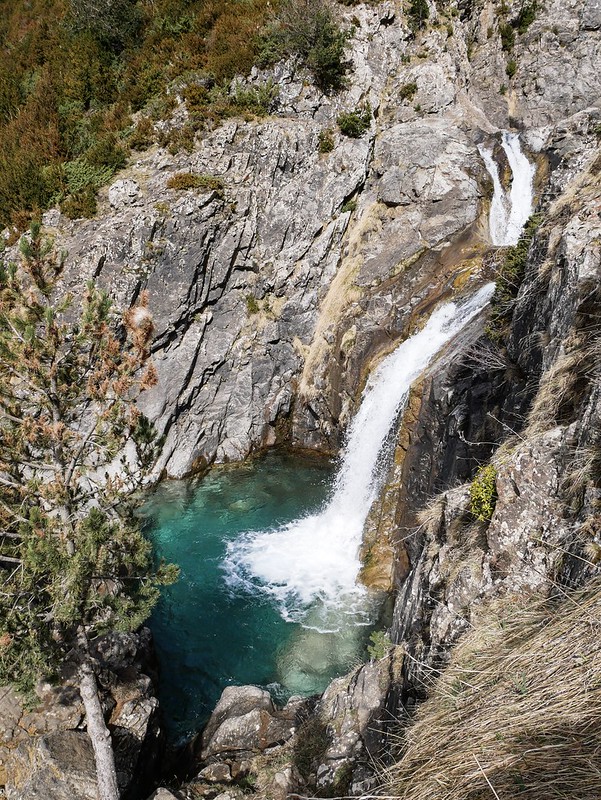 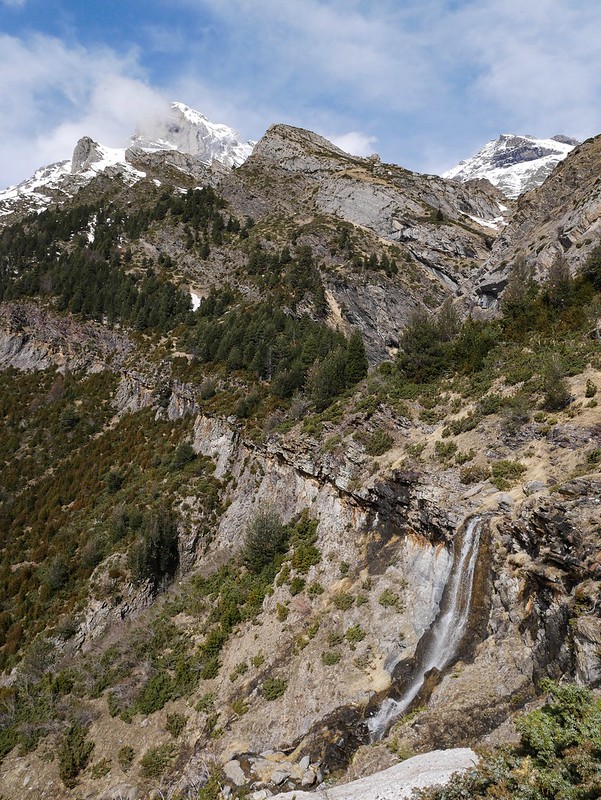 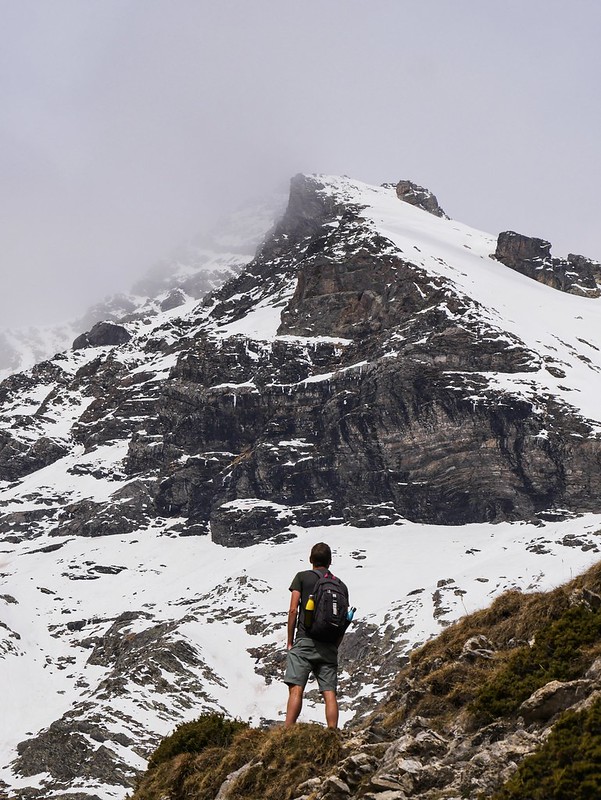 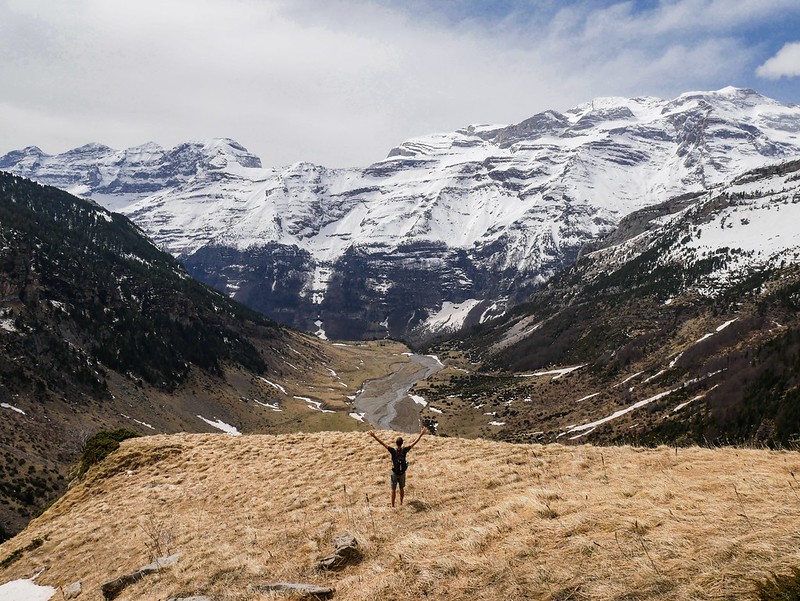 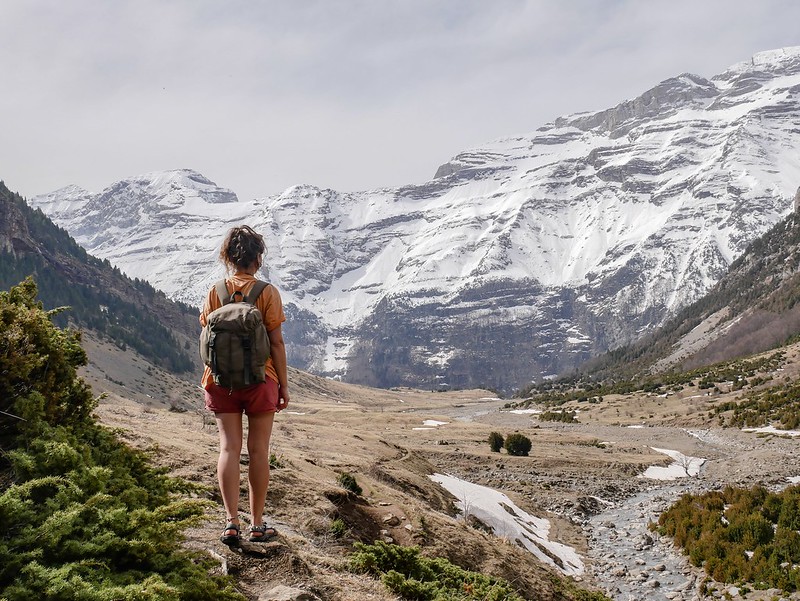 For the route back we followed a dirt track which was 3x longer than the steep forest trail we took up. I’m glad we took this route as it offered some fantastic views of the huge mountains and two very prominent pointy ones. We had such a lovely day back in the mountains and were very lucky that somehow on a mostly overcast day the sun always seemed to find a little gap to poke out. We managed to find a tranquil little spot to camp with a view of my two favourite peaks. 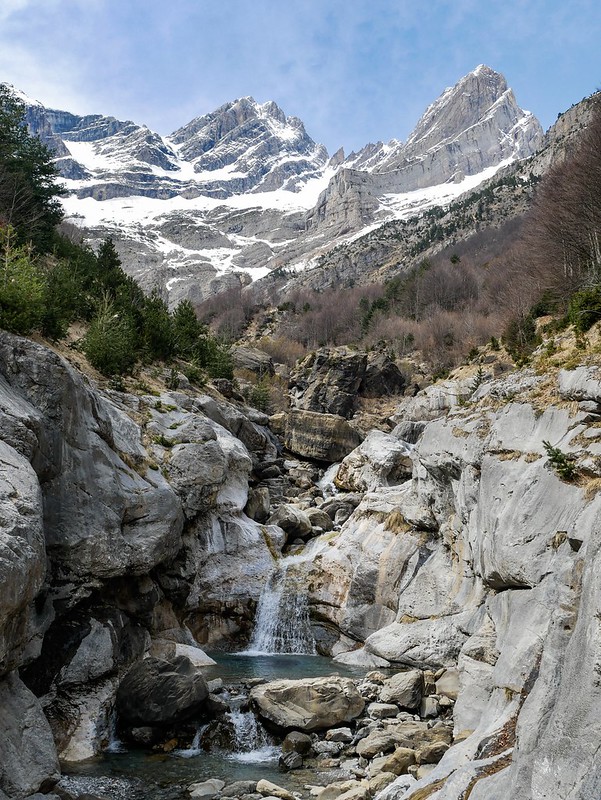 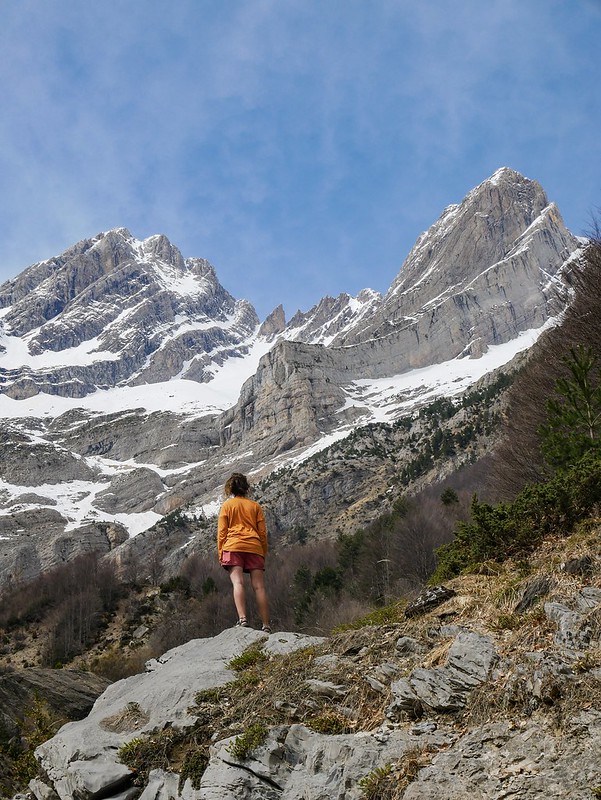 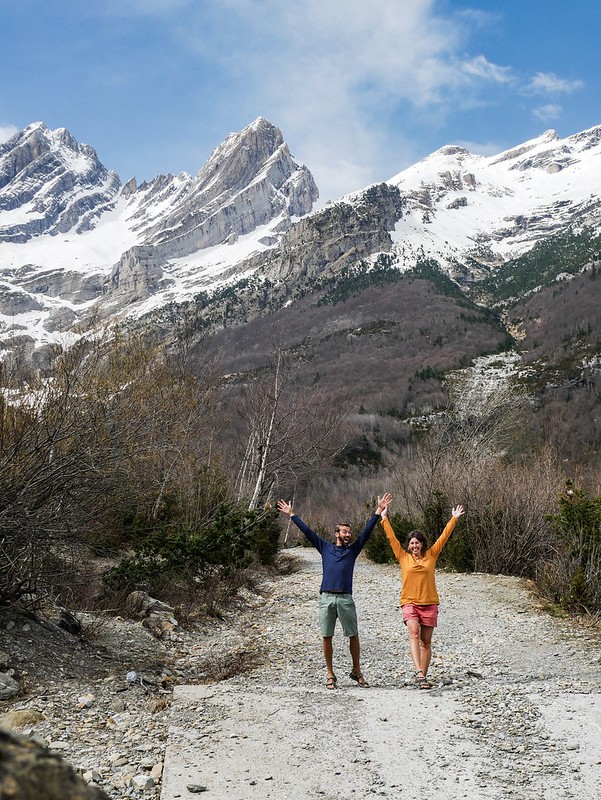 The next morning we wanted to do another hike in the area so we walked up to the little village of Espierba. We were planning on walking up the wiggly road that resembled a squiggle but we discovered a footpath that was a shortcut straight up. The village looked mostly closed down for the season, shutters were down on the houses but it was still a very cute place with lush green pastures and the most incredible mountain view from every house. 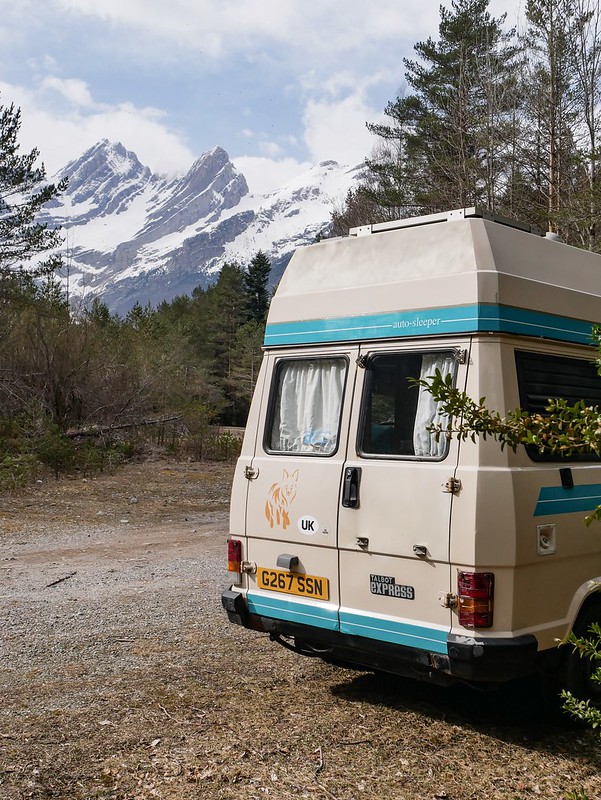 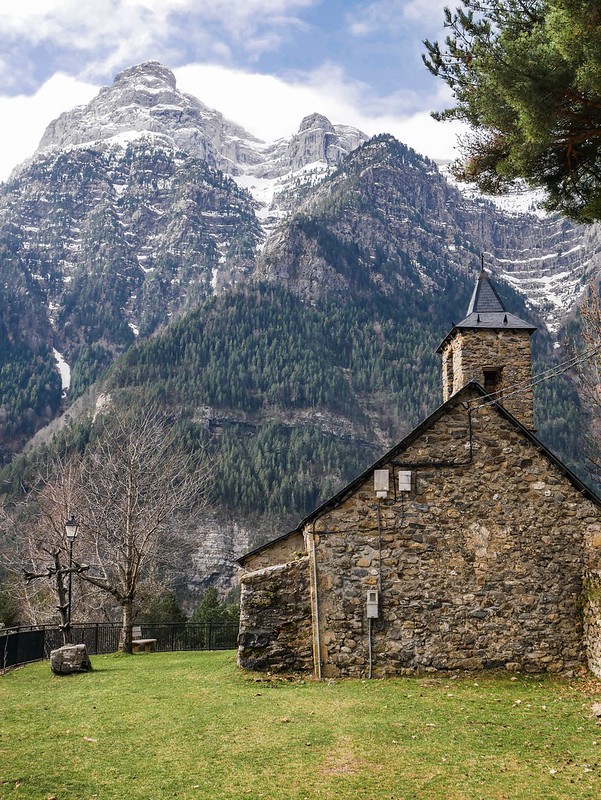 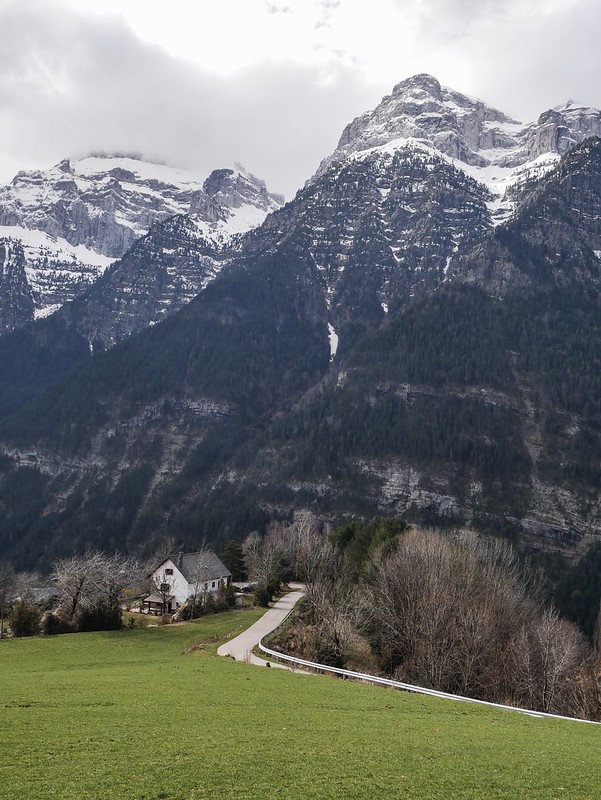 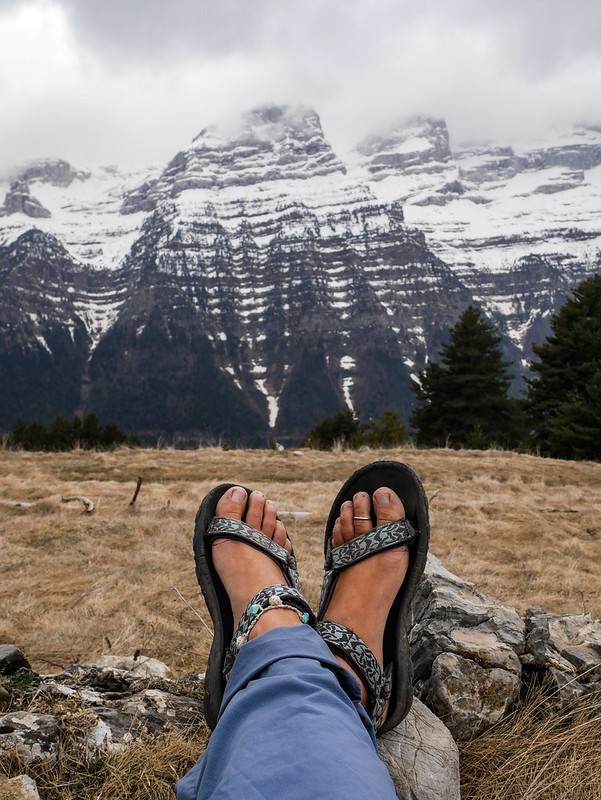 We decided to push ourselves again and climb up to the ridge above the village at about 1800m elevation. We were excited to see the view down to the next valley but it was rather anticlimactic. The views were way better in the original valley with much higher, snowier peaks. We’re not having much luck on these add-on hikes but I can’t complain as we had another beautiful spot to eat our lunch. We spent the rest of the day relaxing in Helga, baking cookies and gawping at the mountains outside our window.