We left the high mountains of the Pyrenees and followed a hilly route through the countryside past tiny villages. We wanted to spend longer in the mountains but the temperatures due to drastically drop over the next couple of days down to -10° so we reluctantly drove south west with the big snowy peaks becoming tiny specks in our wing-mirrors. On our way south we stopped at Orós Bajo which had a short walk to a waterfall. The first section all looked man made with almost tiered square pools beneath the falls, but further up the stream was the main waterfall which was really impressive. The rock walls surrounding it were bizarre and covered in creased like layers of melted lava. The waterfall plummeted down in two separate falls and the lower one filled a stunning pool with an aqua blue centre. We braved a quick dip in the icy water before running back to Helga. 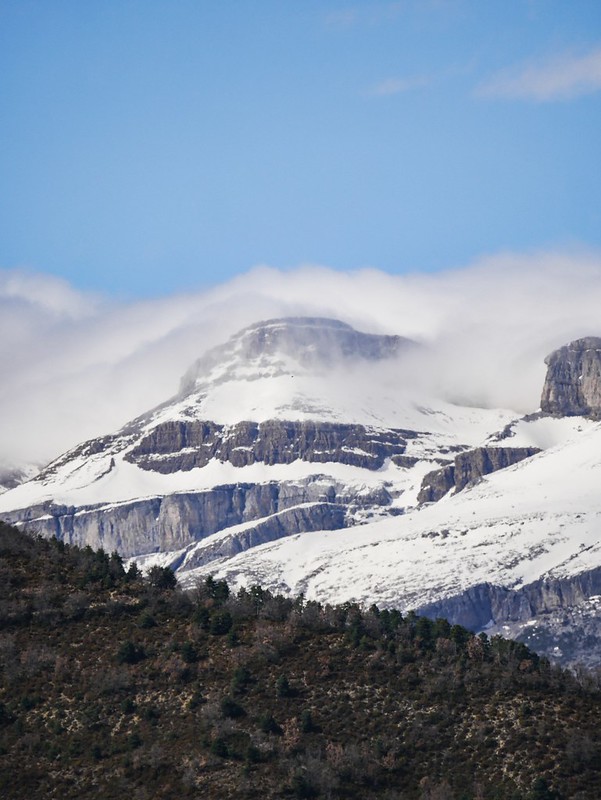 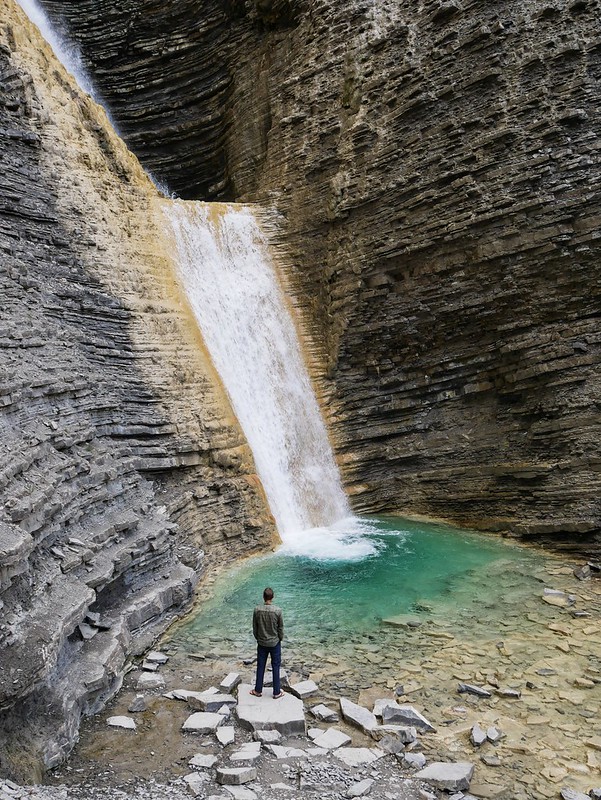 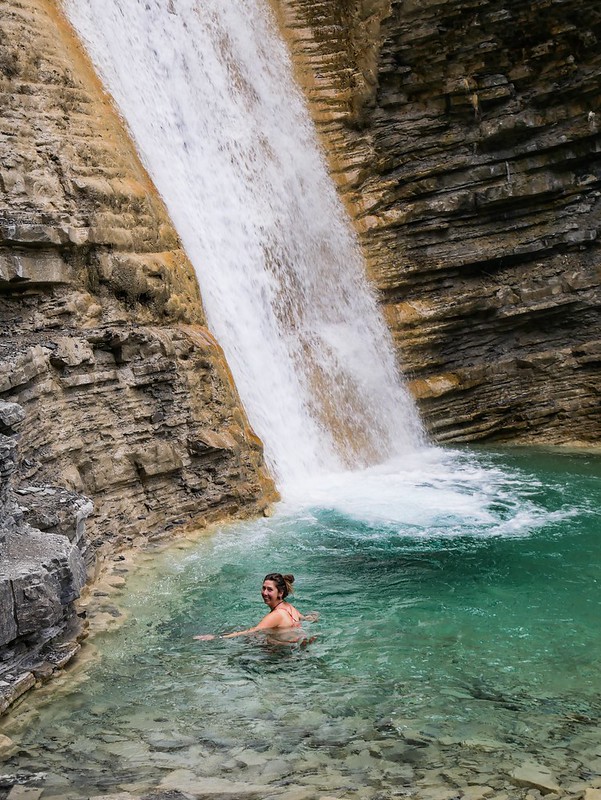 Tonight we decided to make our way to Jaca, a bustling little town and the entrance to the Pyrenees. It was a nice small town with just 11,000 people which meant we didn’t have to worry about traffic or parking. We wanted to have tapas for the first time on this roadtrip and it seemed like a popular place to do so. But to be honest I’m not a huge fan of tapas, the Spanish cuisine is so meat orientated and if it doesn’t have meat then there will be anchovies hiding somewhere. But – its a quintessential part of Spanish culture and albeit we’ve had tapas on our previous trips we felt we needed to give it another go.

It was 8pm by the time we walked up the endless steps and arrived in the old town yet the bars and restaurants were empty. I much prefer a menu so I can take my time looking and ordering what I want, they do sometimes have tapas menus but they also just have bits displayed in a glass cabinet on the bar top. It always makes me wonder how long the foods been sat there. We peered through a few bars to see what was on offer but it just looked like slices of french bread with something shoved on top. It was already way past our dinner time and Craig looked at these tiny morsels and said “that’s not gonna fill me up!” It was now 8:30pm and the bars were still empty and we didn’t particularly fancy the idea of trying our broken Spanish in a room where our voices will echo so we decided to give up and cook a proper meal back in Helga. The locals don’t really come out to eat until 9 or 10 which is almost our bed time! So we bought a nice loaf of bread from the shop and made our quickest meal of a tomato and mozzarella salad with avocado. Craig scooped some avocado onto a piece of bread and said “there you go, tapas!” which made us both laugh.

I really wanted to get churros while in the town though, they’re like thing doughnut sticks sprinkled with sugar and you dip them into a glass of thick hot chocolate. Seeing as we didn’t get it for dessert last night we decided to have it for breakfast the next morning. It seemed like a bizarre thing to eat for breakfast, even though I consider chocolate croissants or Nutella pancakes an acceptable meal in the morning…I don’t know, churros just seems naughtier but the locals seem to like it for breakfast.

The cafe was full inside but there were a few tables outside which was rather chilly at 9am. As we were ordering a table became available inside and Craig said “Lauren there’s a table over there…but it’s next to that kid” The tables were so close that we would be less than a foot from the child so without hesitation I said “outside!!” I’d rather be uncomfortably cold than sat next to a noisy, snotty kid. The churros were delightful! Freshly made with a perfect mug of chocolate for dipping and sipping. 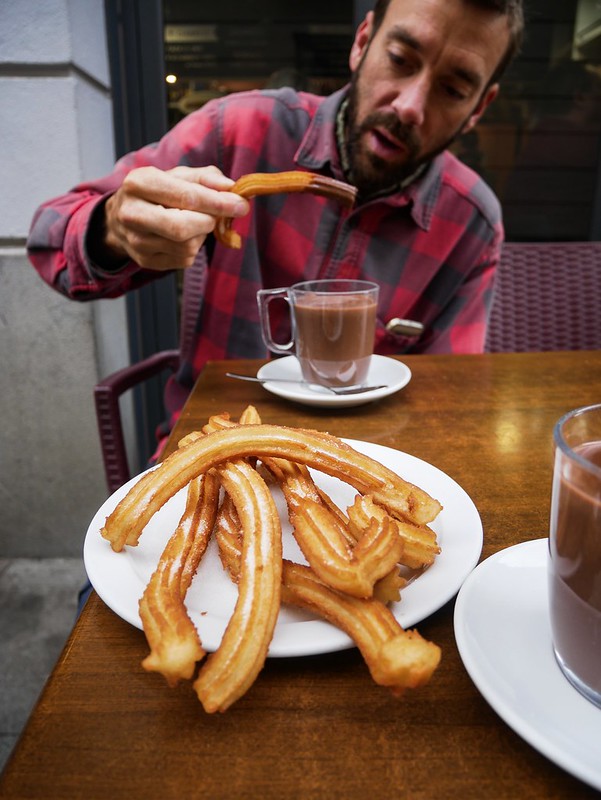 About 50km up the road was a hot spring we really wanted to visit. I’d read it’s only accessible when the lakes low, which we expected it to be as there’s been a big drought over winter. However the past month has been pretty wet but we still didn’t expect it to fill up the reservoirs much. But as we drove along the shores of the turquoise lake it was unmistakably full. So full that tree tops were poking out the water! We parked up and followed a filthy, litter and human-shit ridden track to the lakes edge. I got google maps out and that’s when it became evident how high the lake was, there were supposed to be ruins of buildings standing tall beside the hot springs and they were completely hidden and submerged by the lake. Craig was very disappointed, he was really looking forward to soaking in a hot spring but alas, you can’t see or experience everything. The lake was pretty though so we found a nice big lay-by overlooking it and pitched up for the day. We even managed to brave a quick dip in the lake, possibly our last swim in Spain as the weathers due to drop below freezing from tonight.

Just as we were drifting off to sleep we heard a strange noise in the van. We took our earplugs out and tried to focus on what it could be but it didn’t happen again. A few minutes later car lights shone through the cracks in our curtains and we wondered who an earth would be turning up at almost midnight in such a remote area. Craig was peering out the curtain trying to figure out who it was and we think it was a small campervan but it was hard to tell. The weird thing is they parked up 2m away from us, they could of parked on the opposite end of the lay-by 30m away but instead they shone lights near us and slammed their door repeatedly. When I shared this happening on social media a lot of people said they probably wanted to camp near people to feel safe. Which is laughable in this situation because they might’ve got a peaceful night sleep but it left us feeling totally unsettled due to the unknown and late hour. I understand some people don’t like camping alone, so therefore they should really be aiming to spend their evenings in campsites or popular free camping areas and aires which is guaranteed to have neighbours. Anyway, we were now wide awake and still not sure who was parked next to us but we tried to get to sleep. Sadly by this point a pretty wild weather system rolled in. We had the most sporadic gale force winds just come out of nowhere, there was never a build up and they’d just hit us aggressively, shaking the whole van. I couldn’t prepare for the next gust as it was so random and it felt like we were going to get pushed off the cliff. When Craig got up for a wee I asked him to put the van in gear as I was convinced we were going to be pushed by the wind.

When we woke up there was a light dusting of snow on the grassy floor outside. We certainly didn’t expect to get snow in April but here we are. I didn’t have much of a plan for today and we felt exhausted from our restless night so we just did a short drive to Javier. The tiny village is home to a mint condition castle, too mint in my opinion as it almost looked like a new-build. I saw a photo online from a festival or pilgrimage that took place here a couple weeks ago and the place was packed, but today it was just us. 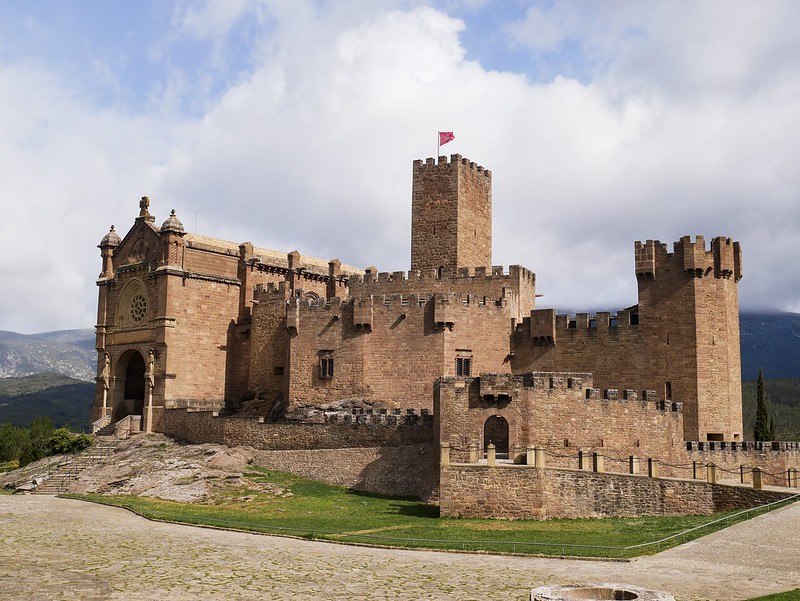 We ended up parking up for the rest of the day besides a beautiful turquoise river so we could do some travel planning now that this cold front was causing havoc. The weather changed every 5 minutes from blue skies to snow storms, it was wild! It wasn’t a gentle snowfall that can be calming to watch, this was an absolute blizzard with the snow blowing horizontally. The wind was intense but luckily this time it was on Helga’s rear so we weren’t shaking too much. The gusts would make us feel like we were in a tornado as it swept across the gravel road and threw walls of dust into the air. 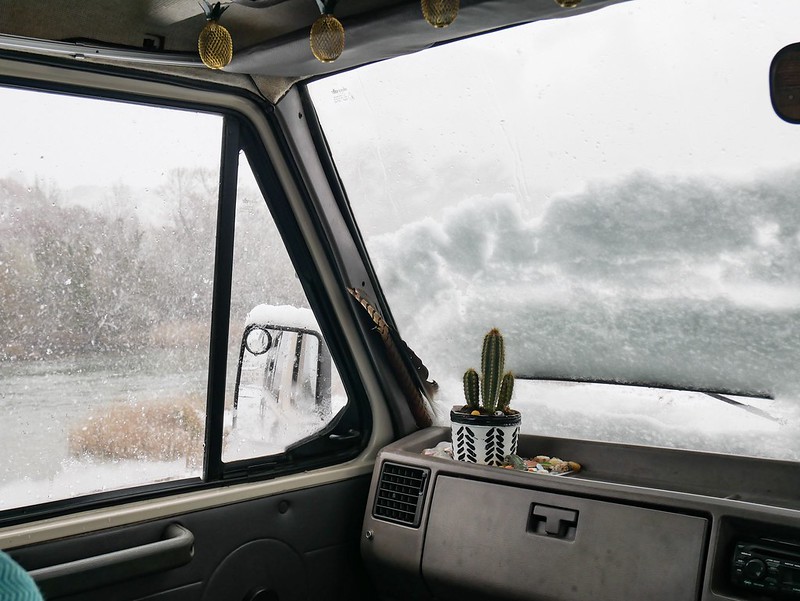 When we woke the next day we had 3 inches of fresh snow!! Holy moly. It was a lovely day though and the sun was shining so we cleared the snowed off our windows and hit the road. We had to drive very carefully as there was snow on the roads, luckily a few drivers before us had cleared a route with their tyres. We made our way to Foz de Lumbier, an impressive gorge. It was a stunning drive as everywhere was covered in a white dusting of snow. 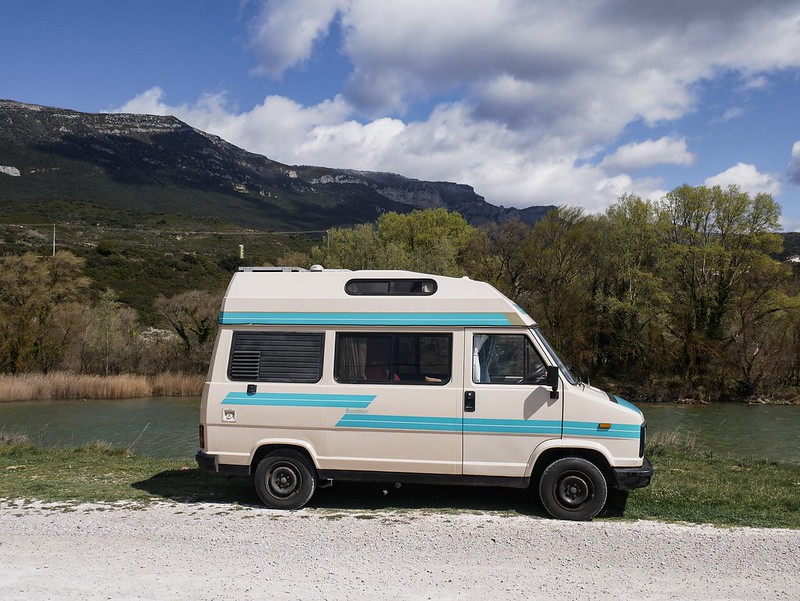 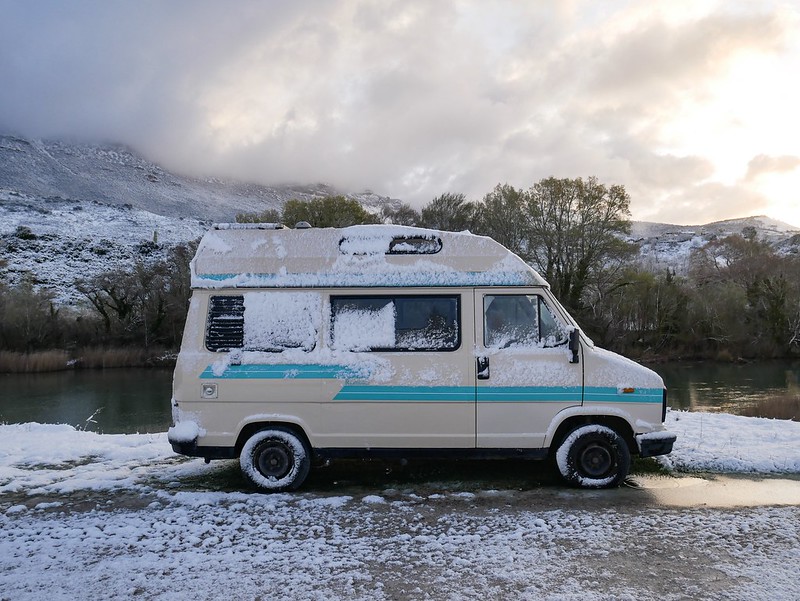 The route through the gorge was only about 4km return so a nice gentle stroll where we saw lots of vultures flying above us and nesting on the cliff-tops. There were two long tunnels we had to walk through which were pretty dark but just manageable without a torch. Craig thought it would be hilarious to run ahead and act like a demonic cave creature running on all fours in the darkness while cackling like a witch. It was pretty funny to be fair and we had to do a few videos as some of the clips were too dark. The final time he did it he ran across the tunnel and grabbed the wall, then he ran across to the other side and jumped up to grab the wall again but he completely fell over. I was dying of laughter and even more so when I realised how he fell; the tunnel had occasional holes carved into the walls and it was so dark that he couldn’t see the hole so he jump up expecting a wall and just fell through the air. He was covered in dust from falling into the pit of hell and I couldn’t stop laughing. 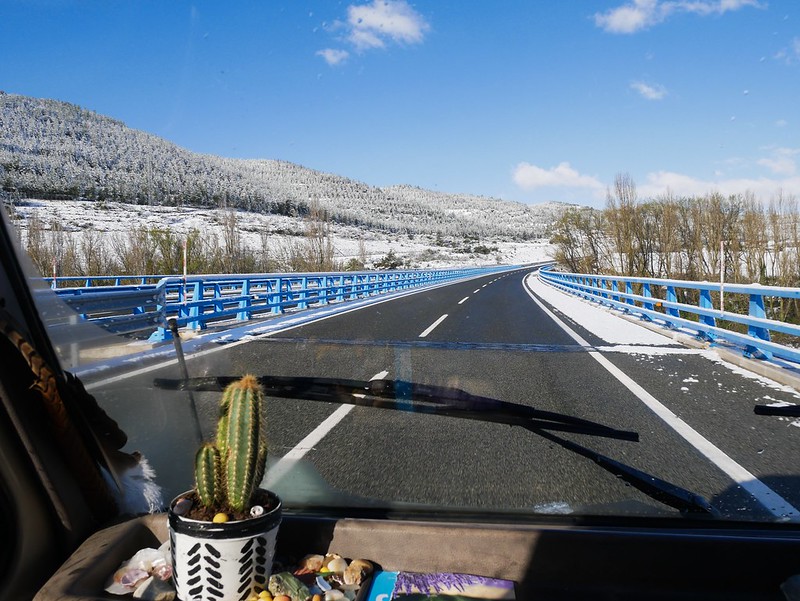 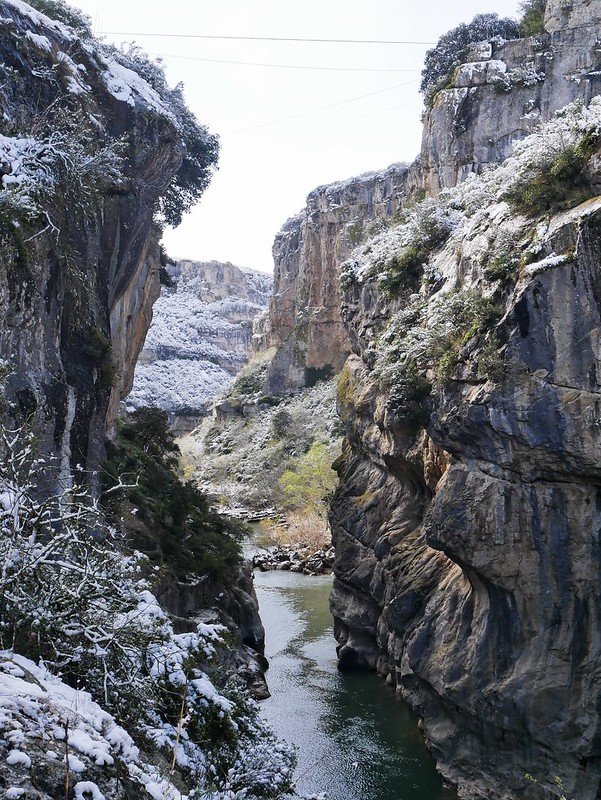 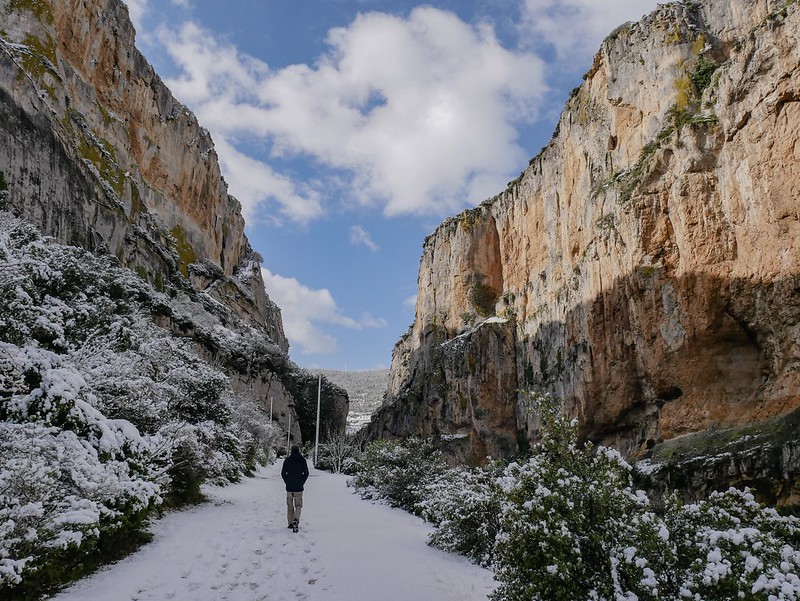 There was a lake nearby which looked like a nice spot for a hike but the trails were just too wet with slushy snow. It was also bitterly cold with an arctic windchill. The wind was whipping up the lake and made it look like a white-capped sea. We managed a short stroll up a sort of service road where we decided to make a snowman. We made it in record time as the snow was perfectly sticky so within a minute of rolling a small ball on the floor we had a yoga-ball sized base. We didn’t put much effort into it, the poor thing was shaped badly, leaning and just had a plant for a mouth and some dry seeds for its eyes. After taking a few videos, attempting a karate kick over the snowman’s head and trying to climb on its back we gave it a kick and demolished it to the ground. 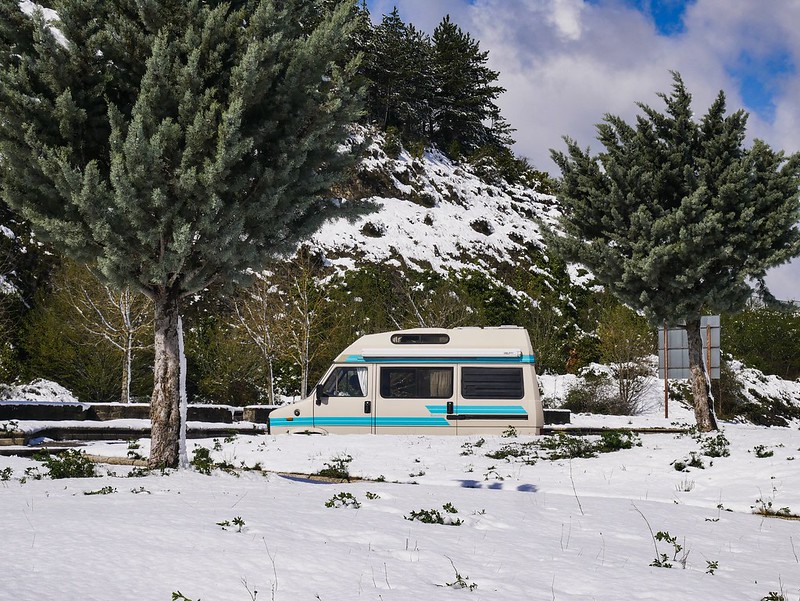 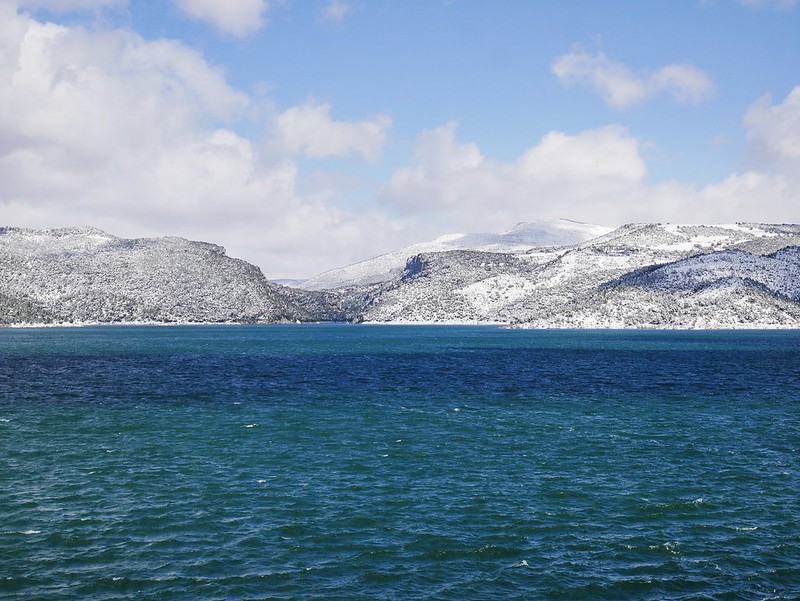 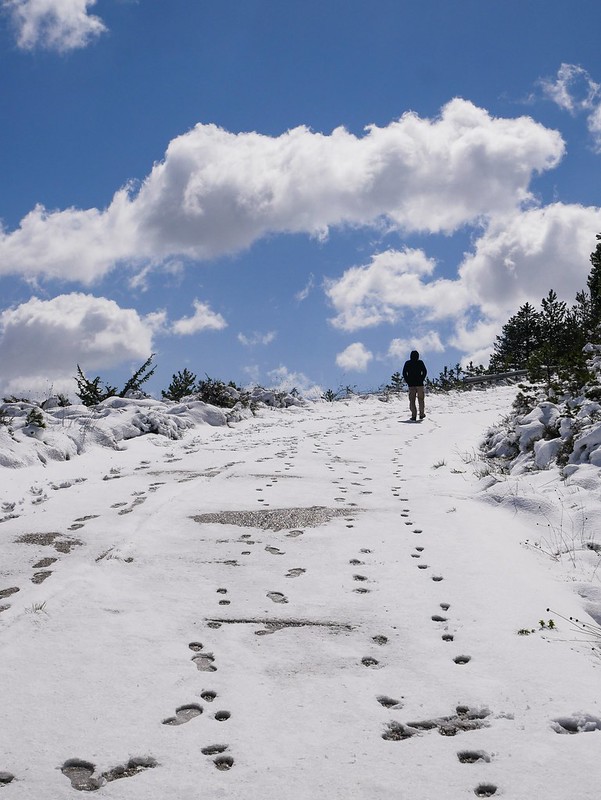 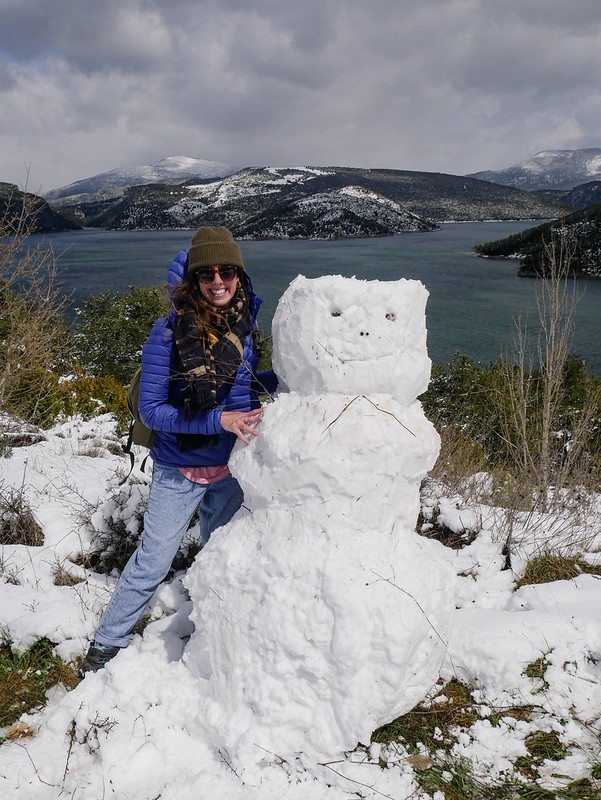