The village of Ainsa is known as being the gateway to the Pyrenees and it was quickly added to my list of places I wanted to explore. The Rio Cinca has been dammed south of Ainsa which has created a series of beautiful lakes which is where we were heading. As we drove through the area we spotted snowcapped peaks on the horizon. The Pyrenees weren’t really on the cards for this trip as we thought they’d be inaccessible due to snow but if we can just hike the lowlands with dramatic peaks in the background then I’ll be more than happy. 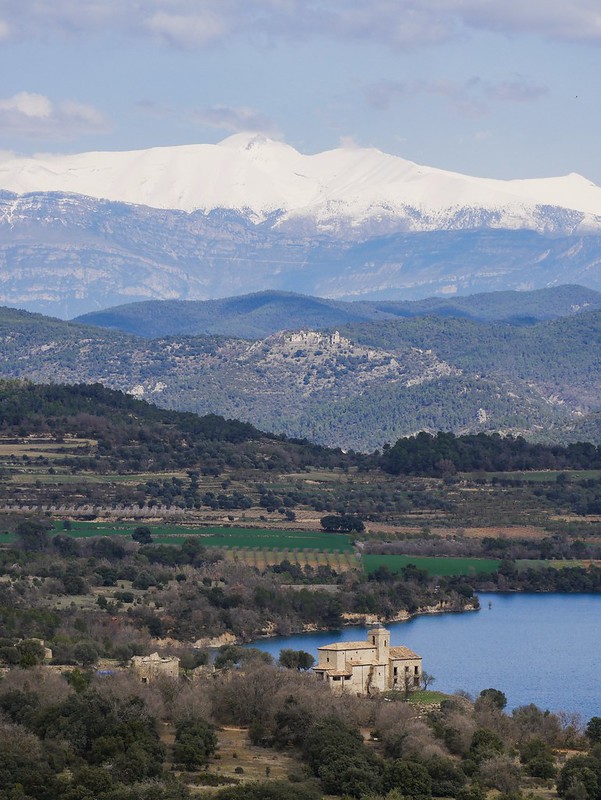 We turned off the main road and headed steeply downhill to a bridge across the lake. The sun was shining and there was a lovely contrast of lush green farmers fields and peacock blue water. We were surprised to be the only people in the carpark, how could such a pretty area be so quiet? But we were very happy about it and joyfully set off on a hike through a gorge. The colour of the water was just unreal, identical to the bluest glacial fed lakes we’ve ever seen. 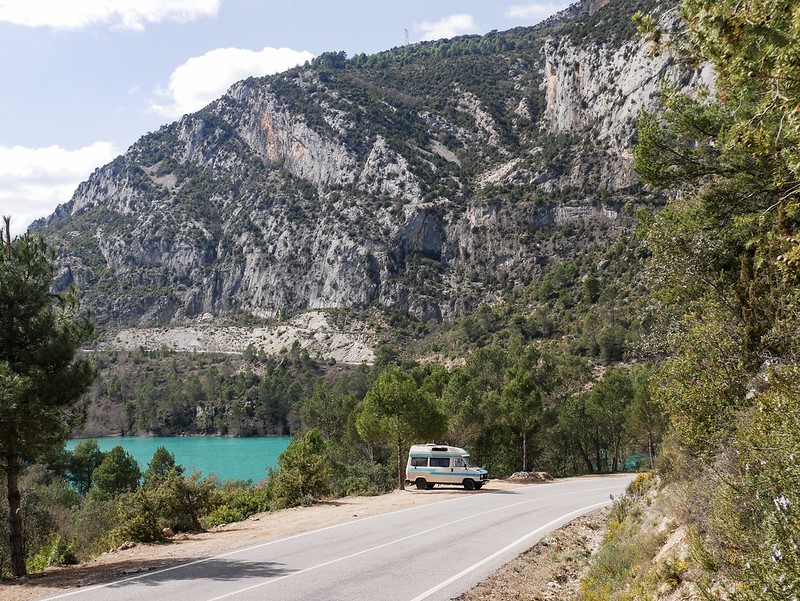 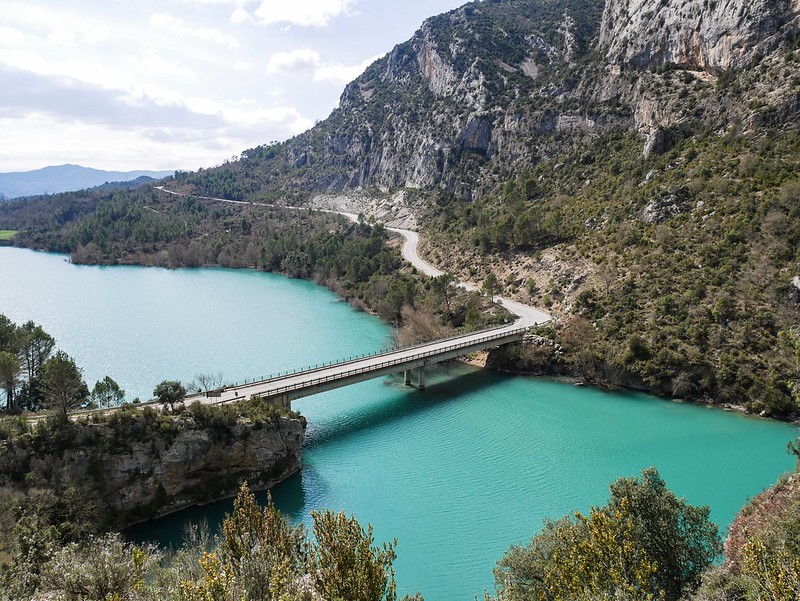 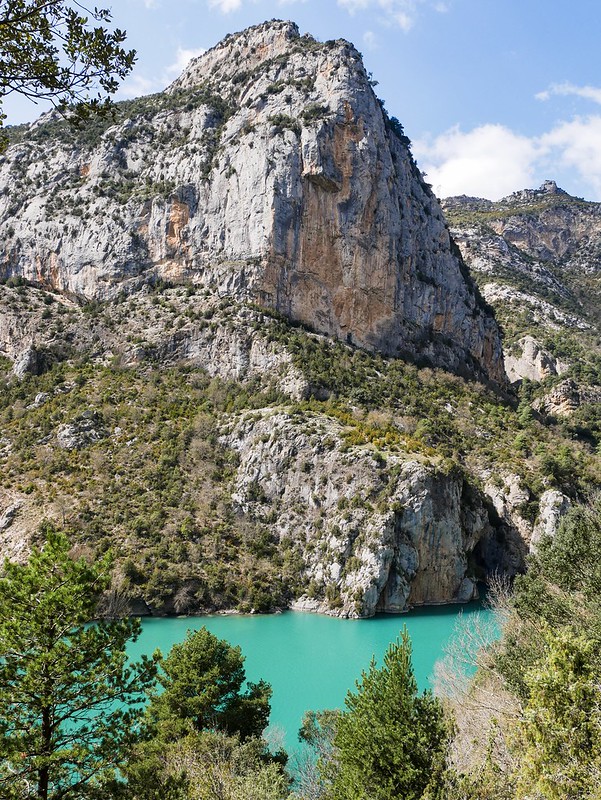 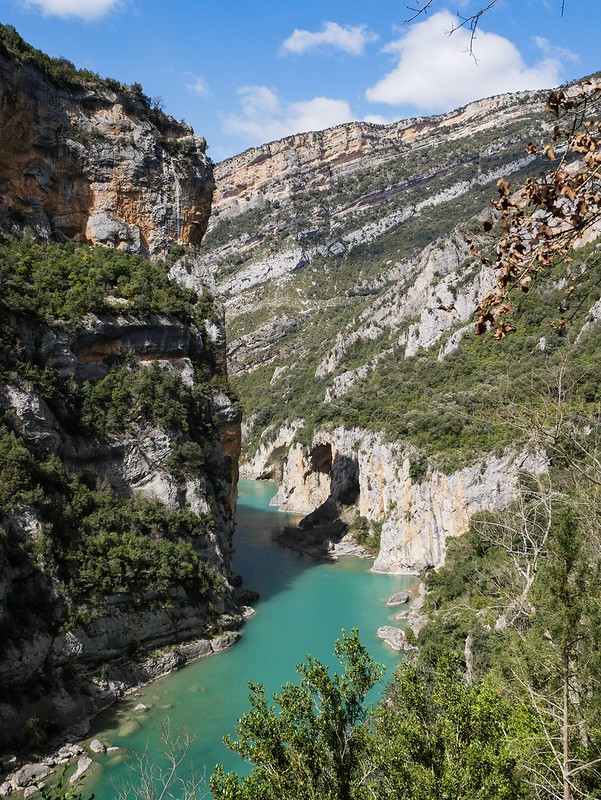 The trail led us to a dam with a spearmint green pool at its base. We had to climb up the steps and through some tunnels to reach the lake above the dam which also offered distant mountain views. Sitting in the lake was a church tower from when the dam was built and a little village was flooded. 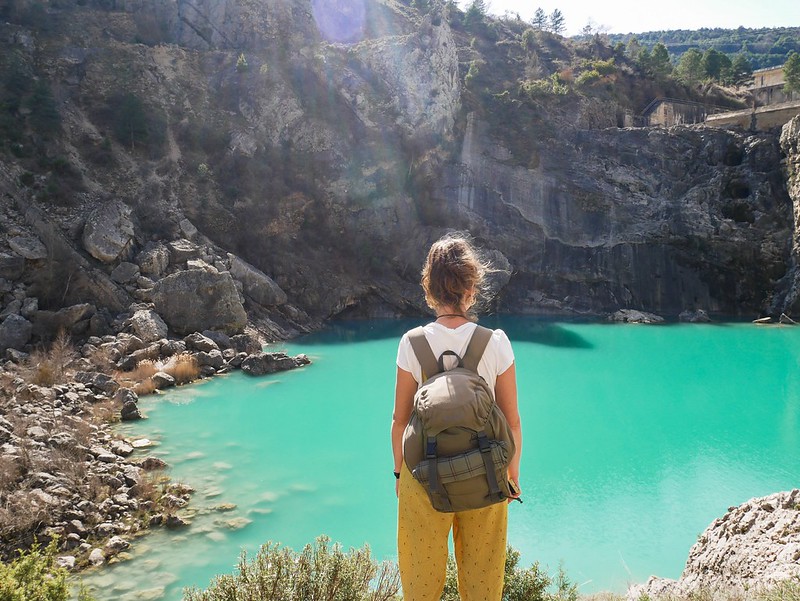 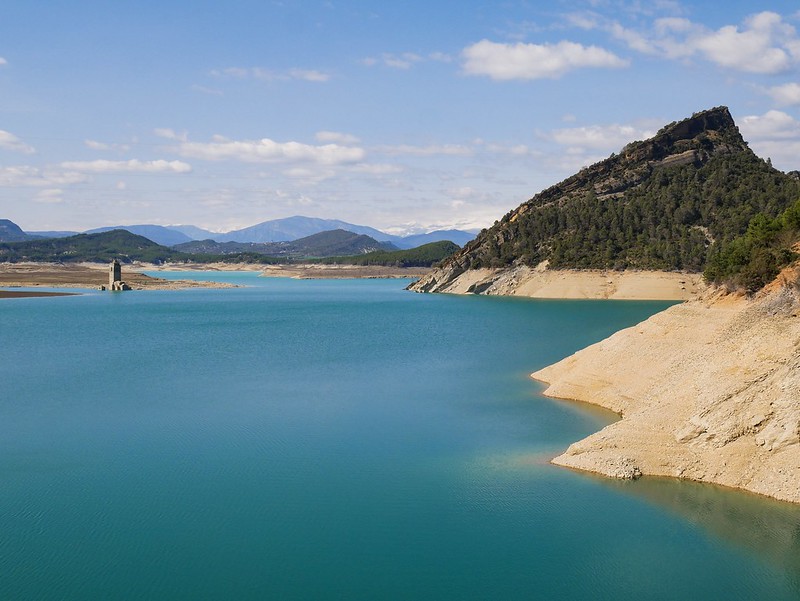 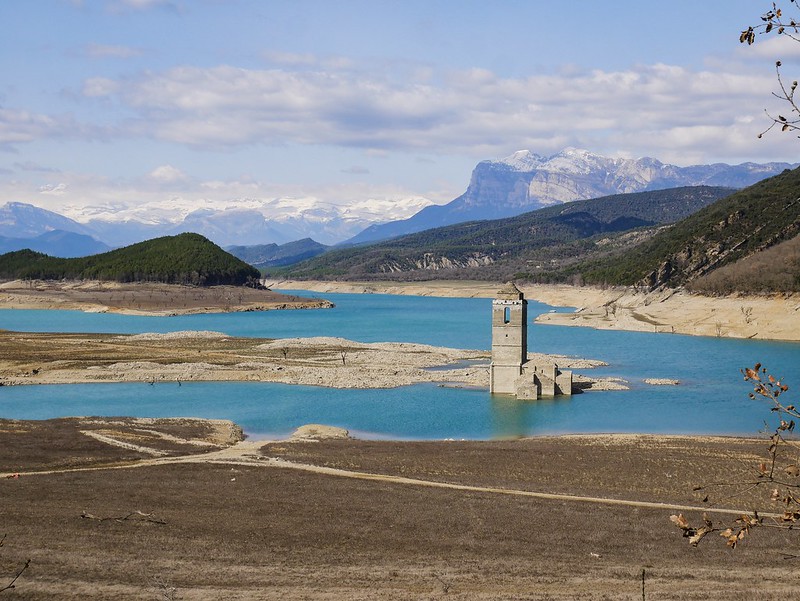 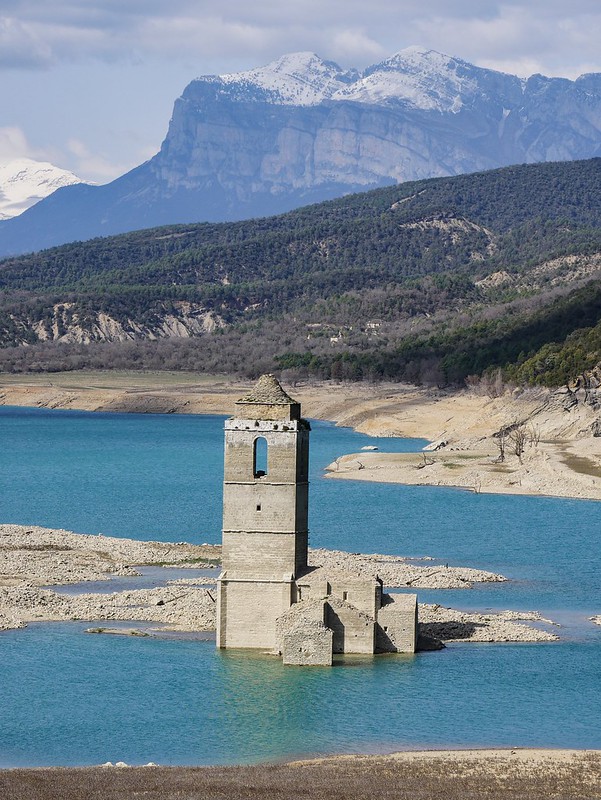 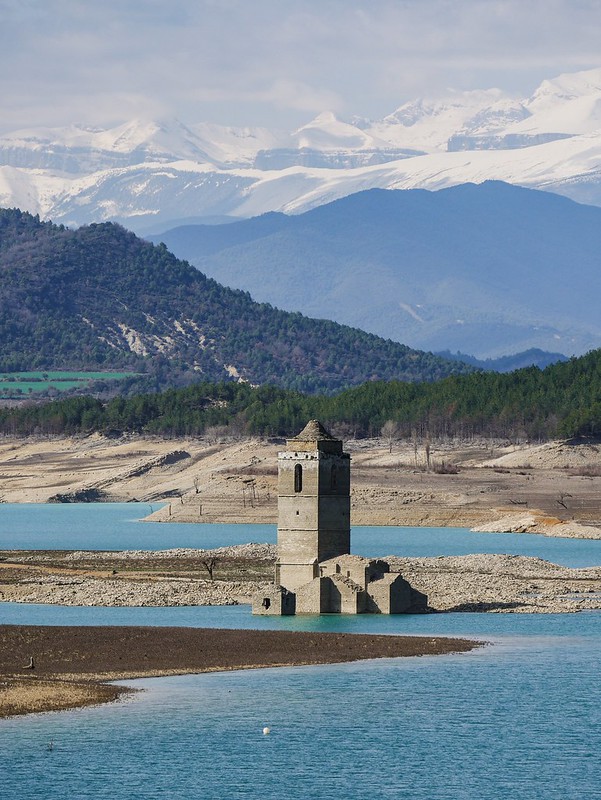 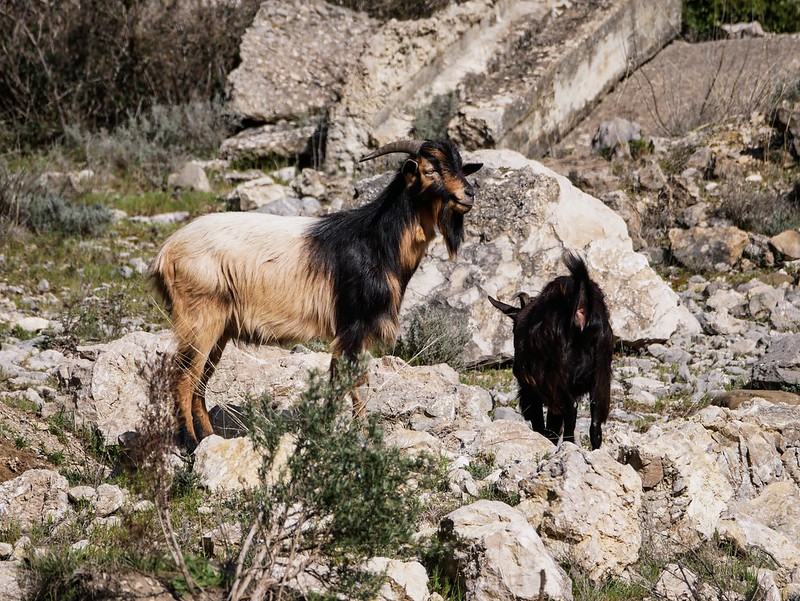 That evening we found a lovely spot to camp with a view over the lake and a little stone village built atop a headland. We woke to an overcast sky as predicted but the lake was glassy so we decided to dress up warm and take our boat out. It was about 8° when we set off and of course the wind appeared out of nowhere which was annoying. So it was a bit of a tough paddle into the gorge section but we had fun paddling into some small caves where it was totally calm. We made it to a big gravely bank which was protected from the wind so we relaxed there for a while before making our way back. In typical boating style the wind completely stopped so our plan of drifting back failed but it was delightfully calm and we laid there listening to the birds tweeting in the trees above us. 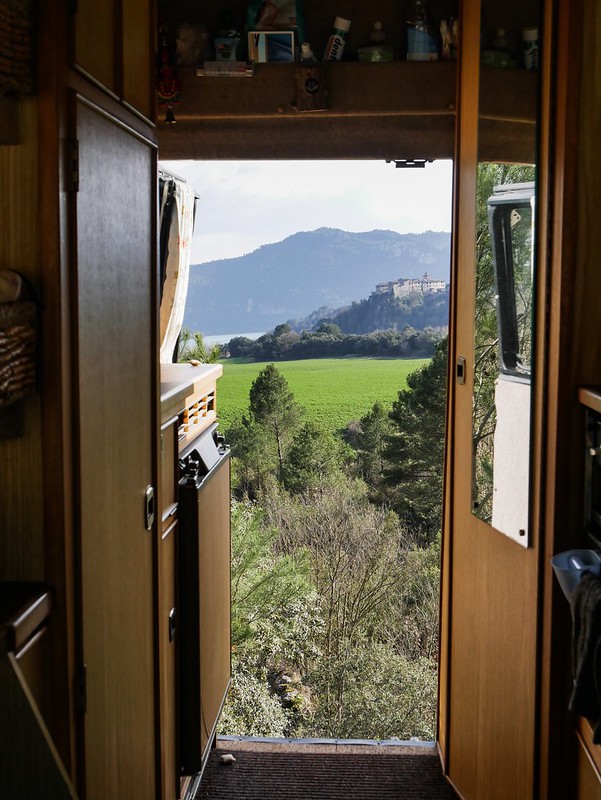 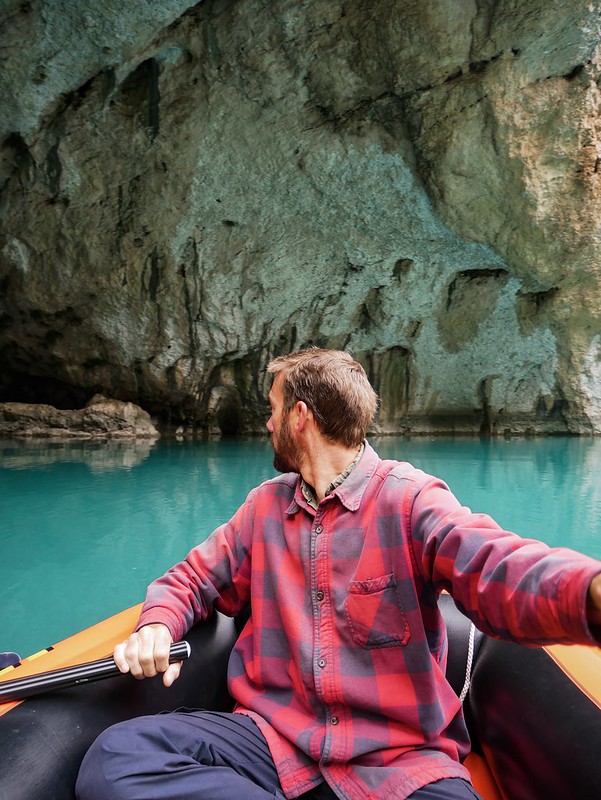 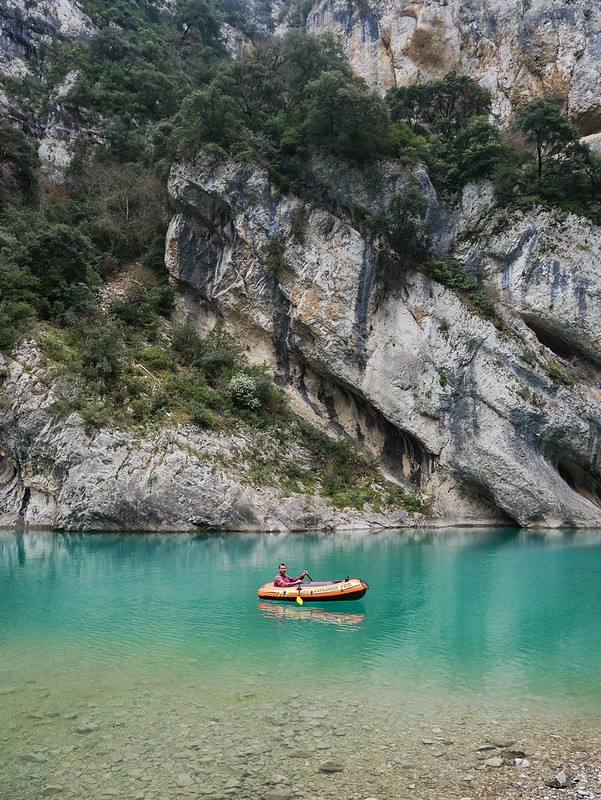 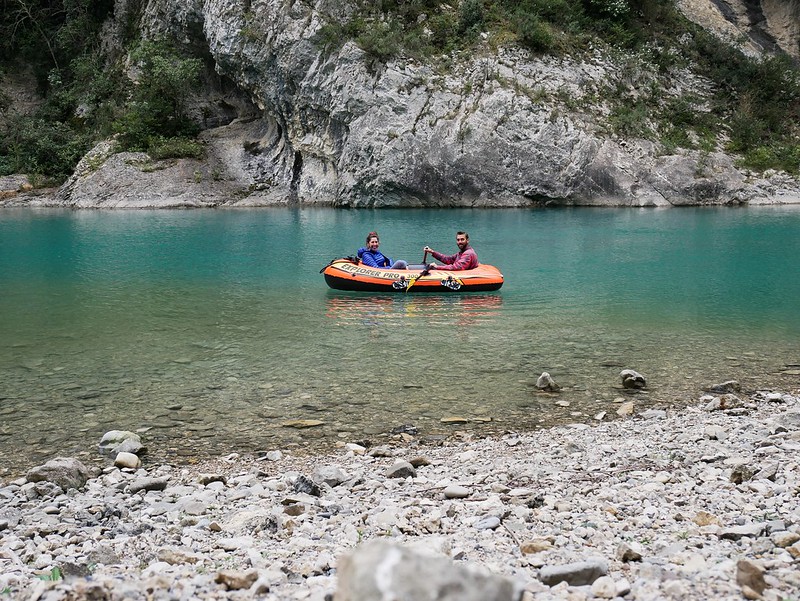 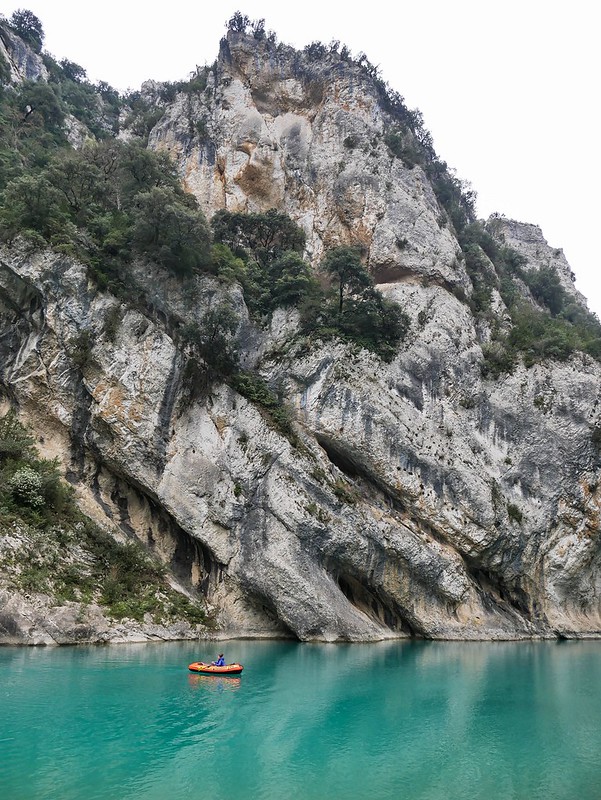 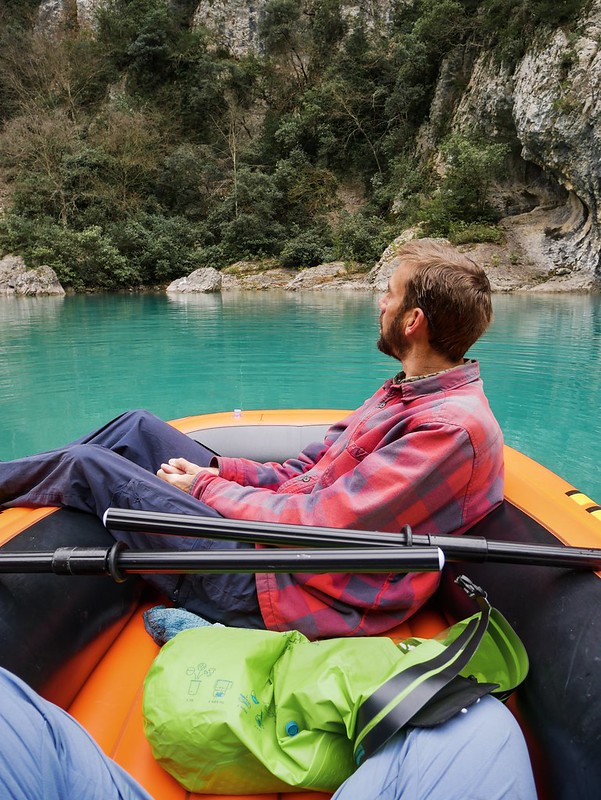 We did a short walk in the afternoon up to Cerro Coton which was a forested ridge-line high above the valley. It had rocky ledges jutting over the edge but the views were a little ruined by thick cloud. While we were up there we spotted a place to camp on the river bed. The waters so low right now that the area is used as a dirt road and camping area so after our hike we parked up and had a lovely view of the mountains. 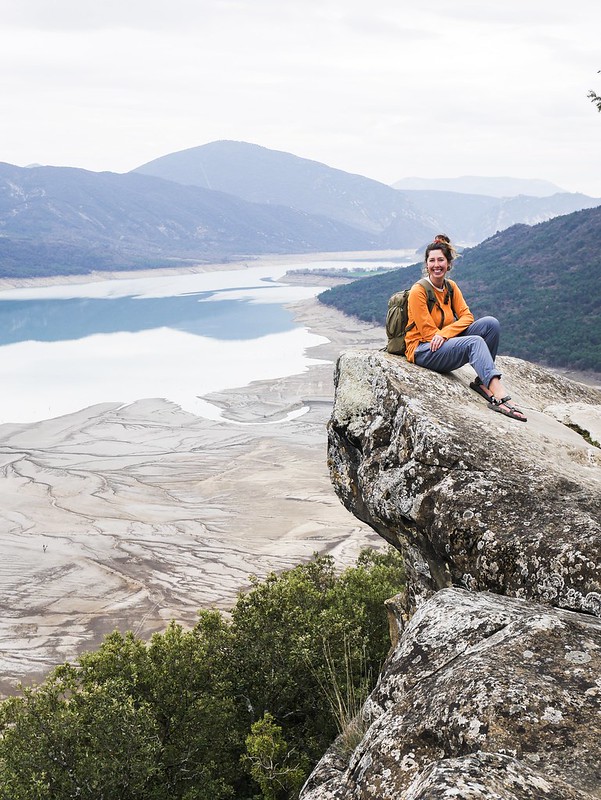 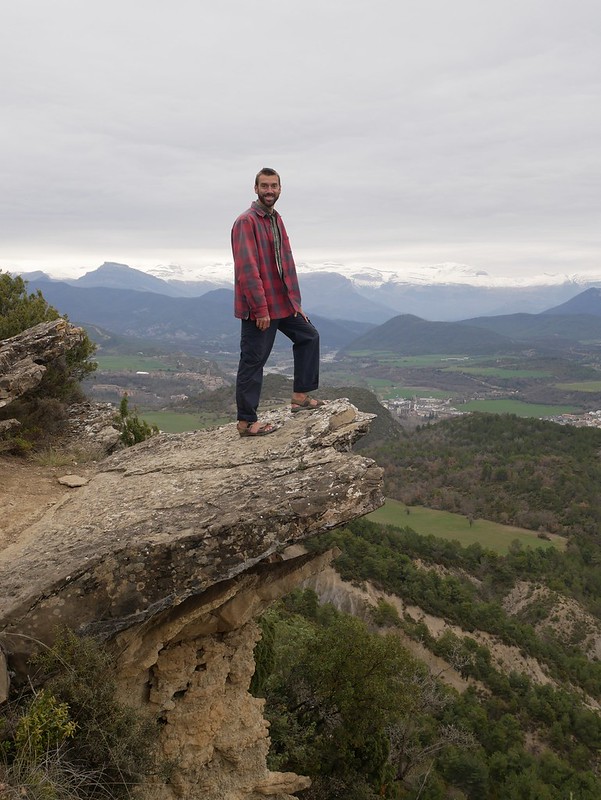 We started the next day with a drive further north towards the mountains. We wanted to hike the shrines of Tella which is only a short loop but it involves a very steep and wiggly road to reach the trail. We decided to walk the additional 10km up the road to give us a longer hike and our camper a nice break. It’s a good job we did because my map has been playing up lately and it suggested the route had 97m elevation gain, which is very small. But we soon realised we were relentlessly climbing up and it was taking much longer than we expected. We had some views of the cloudy-topped mountains to keep us entertained but it wasn’t a very enjoyable walk as I don’t think anyone else opts to do our extension so the path was overgrown with evil sharp plants that cut our legs. We finally made it up to the remote village sitting on a high pasture surrounded by views of the Pyrenees. We met a really sweet border collie in the village who was very happy to be stroked and looked so content that he was almost falling asleep. The loop trail led us past numerous different churches but the best one was Ermita de San Juan y San Pablo. It was set below a huge rock face and encircled by a backdrop of snowy peaks. The location was really impressive but boy would it of looked better if we had clear blue skies and cloud-free mountain tops. Craig went inside the dark church and I decided to lock him in as there was a latch on the outside. Well, he got the last laugh as there was a sort of spy hole in the door and I jumped out my skin when his eye appeared through the dark hole. When I joined him inside we saw a rather strange statue of Jesus, he was just wearing a robe around his waist with a leg slightly kinked and a flamboyant hand raised in the air. Because it was inside a shrine it was clearly Jesus, but in another setting it could be mistaken for a statue of a random gay guy dancing in a flamenco show. 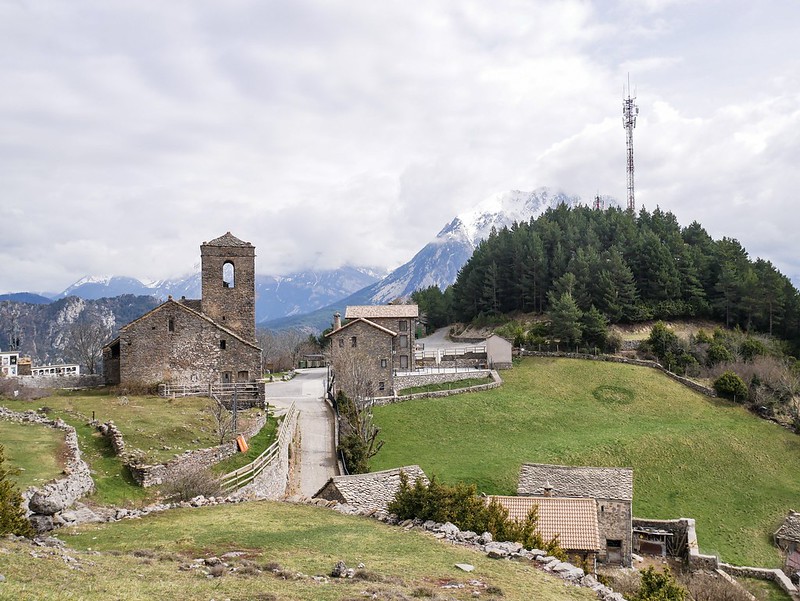 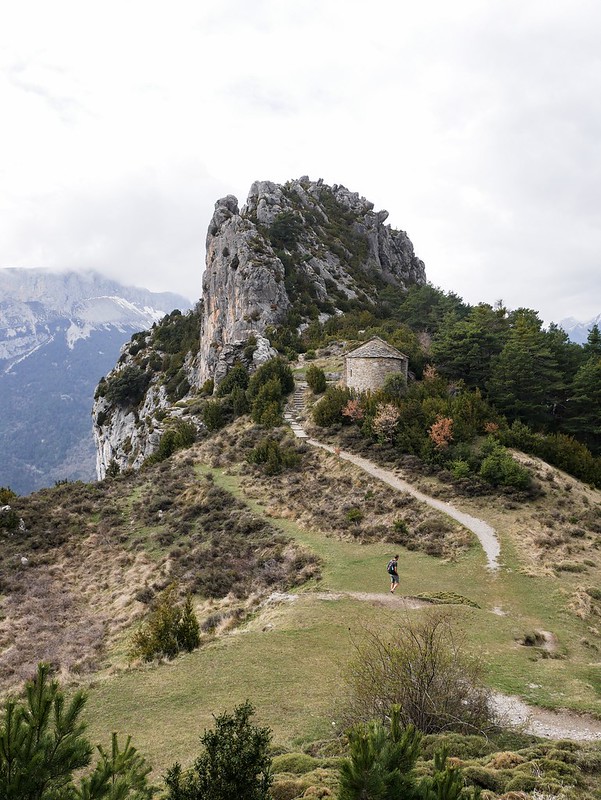 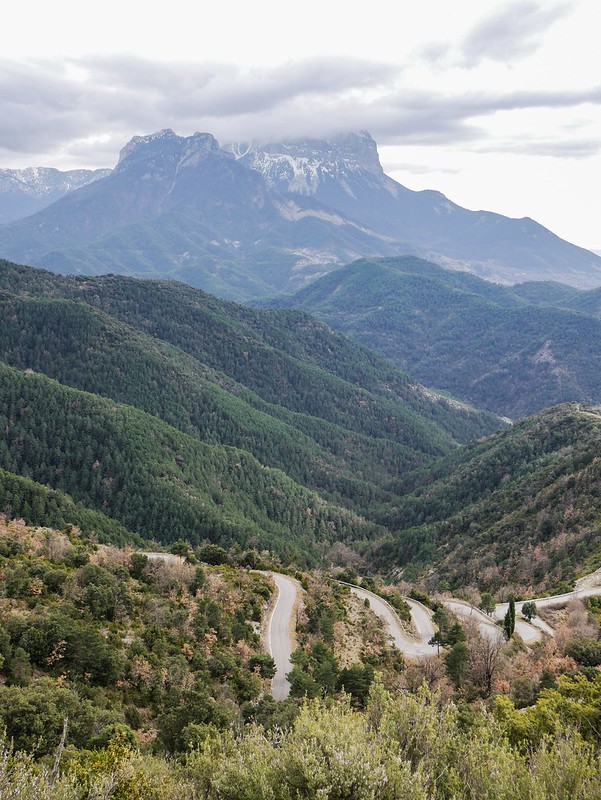 We were happy we didn’t have any rain on the hike but it probably wasn’t worth the effort. The 97m elevation gained turned out to be over 600m and it ended up taking us 4.5 hours to complete. When we got back to Helga we drove a short while up the road to a quiet area by the river where we braved an ice cold dunk for a little freshen up.