Craig and I love wild swimming, especially in fresh water. We’ve enjoyed our sea swims in the Atlantic and Mediterranean so far but I hate having to pre-think having a shower afterwards to rinse the salt water off. Fresh water is so much easier, we can jump into any river and get changed straight back into our clothes without being covered in a salty film. So our goal while we’re not at the coast is to find the best swimming spots.

On our journey we stopped at an unusual sight, it was an abandoned socialist utopia which was built in the late 19th century to be a self sufficient commune. It was called the Colony of Santa Eulalia and it’s aim was to create autonomous towns as they were against the corrupt big cities. The colony managed to become totally self sufficient by growing and processing everything themselves, they even had an oil mill, flour factory and alcohol factory. It was abandoned in the 1940s after the civil war caused productivity issues in the industry but the strange thing is people still live here today. Amongst the dilapidated buildings were little rows of terraced houses with peoples laundry hanging up. 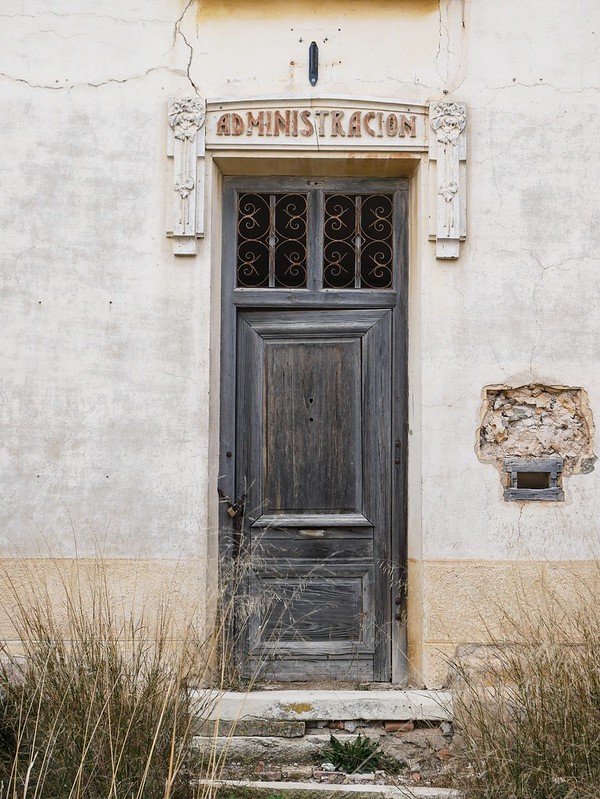 The first building we looked at was the theatre which was all locked up as suspected. But there was a window we could just about peer through to get a glimpse of the inside. Craig discovered a route around the back which led us to the old concrete stage that had fallen through in areas. A brick wall was knocked down and someone had made a couple of steps using breeze blocks so we were able to step up and have a good look inside. It was really amazing to see such a vintage room with an upper balcony and detailed artwork on the walls with painted drapes and portraits of people. 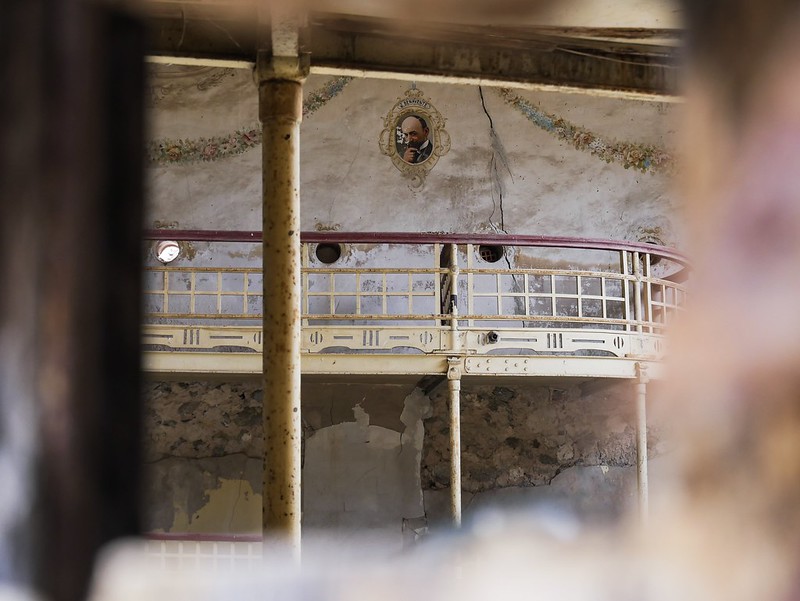 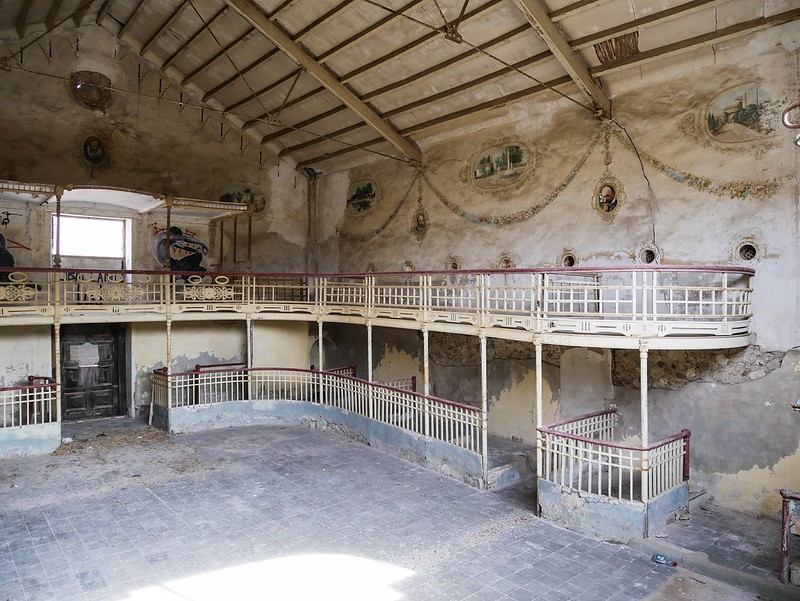 We then made our way to the huge factory which was now overrun with pigeons, the windows were too high to look inside so we just peeped through the keyhole and got a little worried that we’d see a person with a hunch back running past while cackling. Nearby was the alcohol factory, church, casino and an administration building. Some of the walls had totally collapsed and red tape blocked off the area. We had a peak through one window where we saw a retro tiled room and bed frame. It was an interesting little spot to wander around but a shame we couldn’t access more buildings. 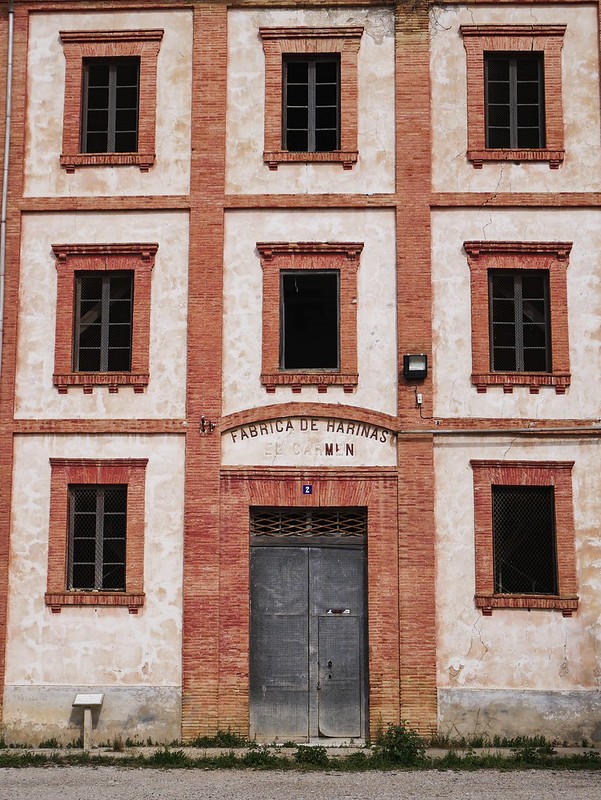 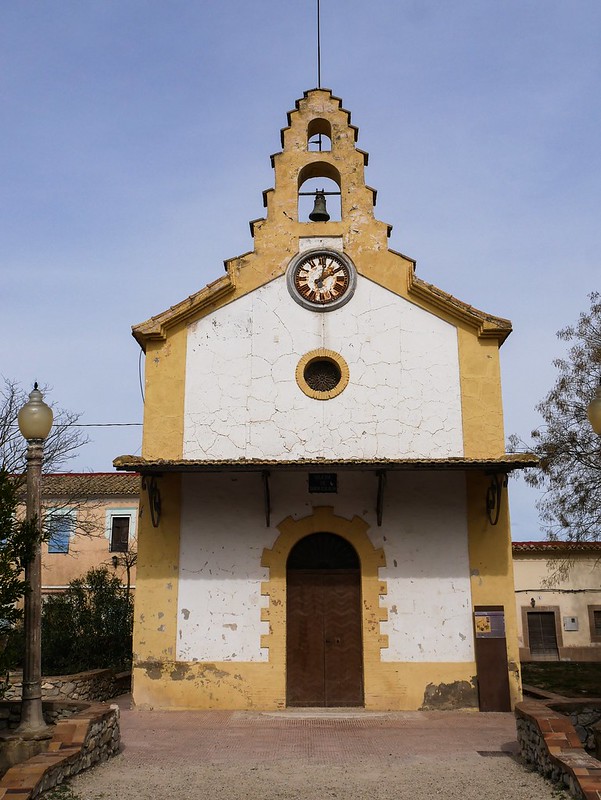 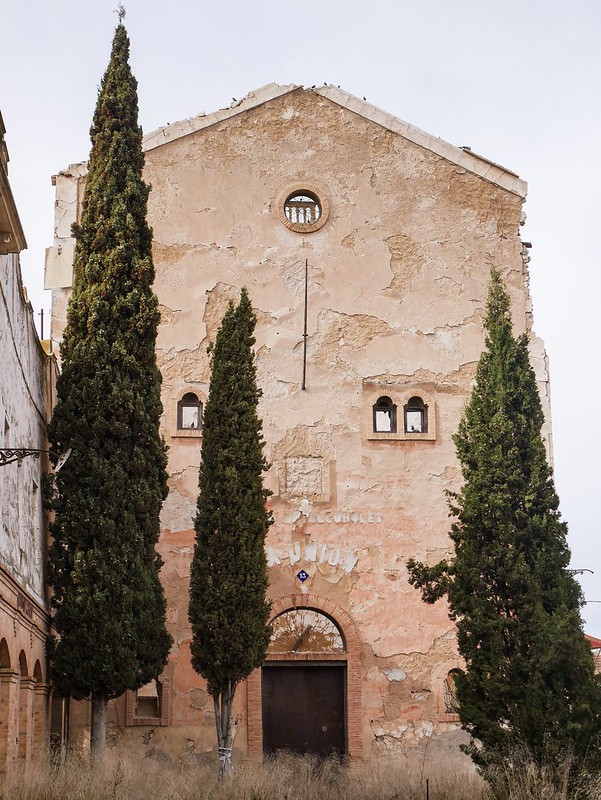 The next morning we drove to Pou Clar, a beautiful swimming hole set in a gorge. It’s fed by a spring so the water is insanely clear. We had a cloudy, drizzly day so the pool wasn’t twinkling in the sun but there was no denying it’s clarity. It was pretty chilly outside, about 13° but I fancied a swim as it looked so appealing. I was prepared for ice-cold river water but it was a delightful temperature, not warm but not uncomfortably cold. I entered the water along a slippery rocky ledge and swam above the deep section for a split second which was rather creepy. If I had goggles on I’d feel quite safe seeing what’s below me, but swimming above the unknown is scary. I soon became a little braver and managed to swim quite far which I was chuffed about, especially as there were some huge carp swimming around and I really didn’t want one to touch my leg. Craig said he didn’t fancy a swim as it was too cold but I told him he’d love it and eventually he gave in and as usual I was right. The water really wasn’t that cold but getting dressed outside in the wind got us both a little shivery. 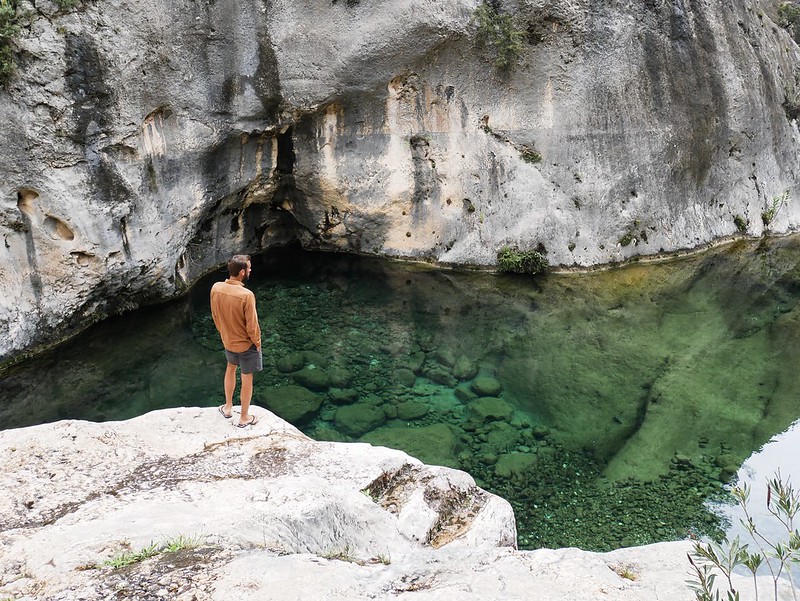 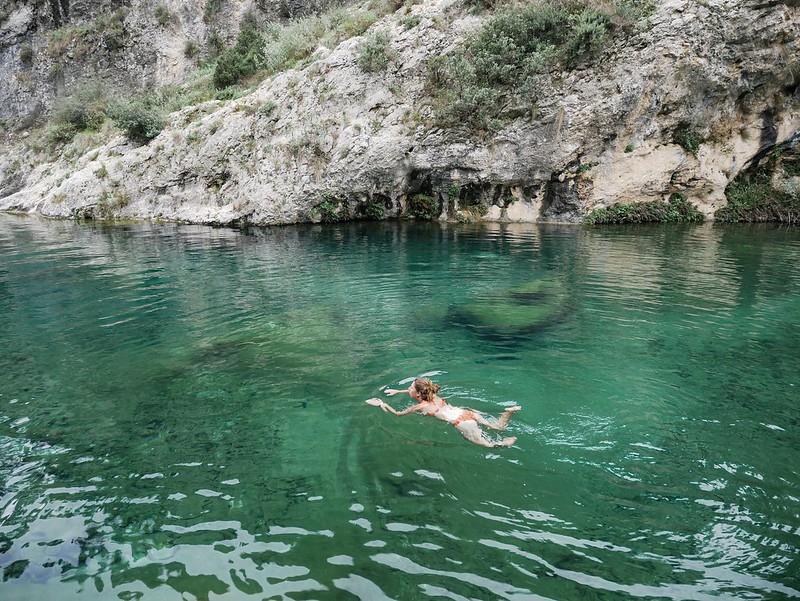 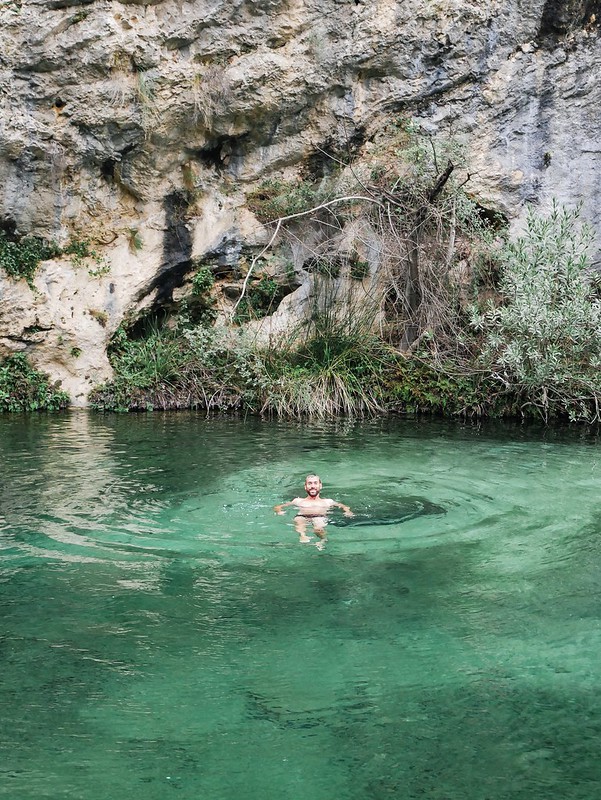 We had more bad weather which was such a shame as we arrived in a little village which had an abundance of swimming holes. We decided we just had to make the most of it and go for a swim regardless of how cold it was outside. Our plan was to swim and then quickly change into warm clothes. The first spot was much nicer than we expected, it was a spring fed pool with crystal clear water that went deep and royal blue in colour. Once again the water was a lovely temperature so we enjoyed a swim while it drizzled with rain. 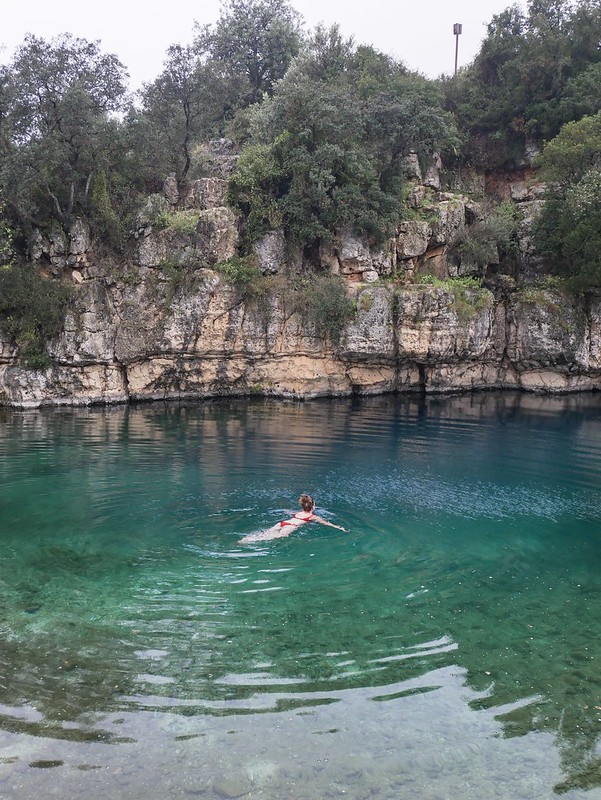 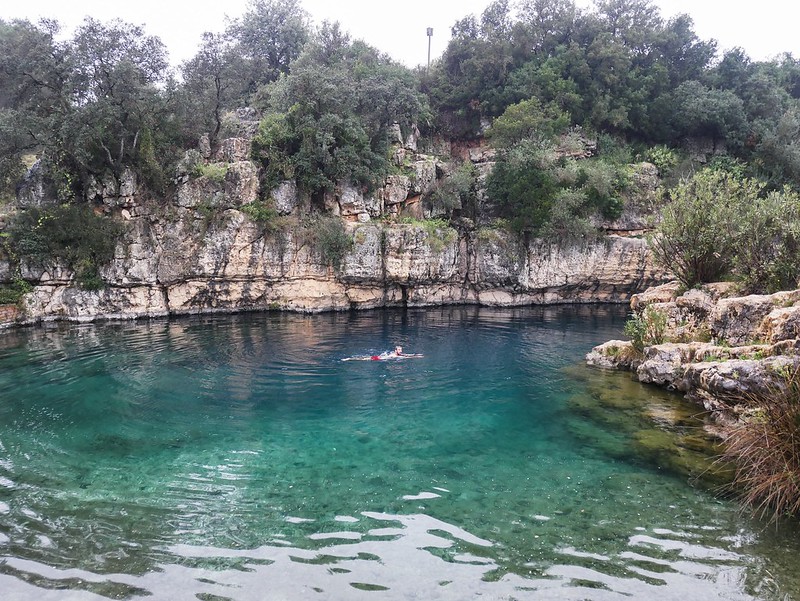 We then headed towards the town and followed some steps down to the next swimming location in a gorge. The water was shallower here with a white gravelly bottom so the water was an incredible aqua blue colour. It became deeper as the water flowed through a narrow section of the gorge and we both enjoyed a refreshing swim. We were supposed to continue our walk to see some waterfalls but the rain became worse so we retreated back to Helga for a couple of hours. Eventually we were able to continue the short hike to the falls which was quite challenging as the steep, muddy slopes were extra slick in the wet conditions. We made it to the main waterfall which was absolutely gushing and we couldn’t help but laugh about us waiting out the rain because the waterfall was so powerful that we got totally soaked by it. 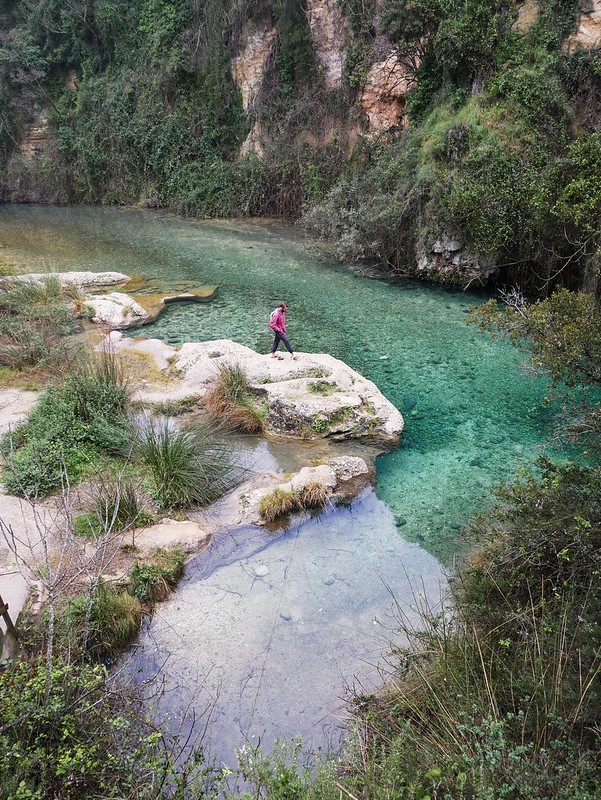 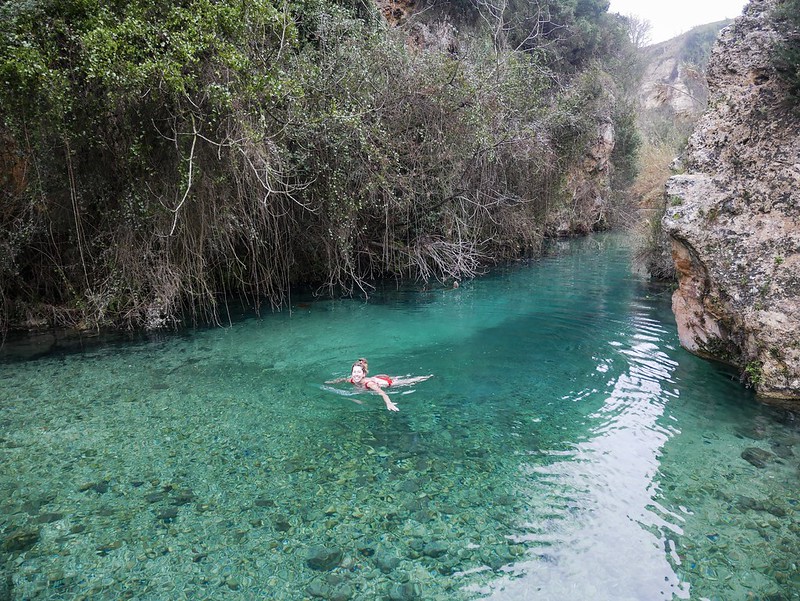 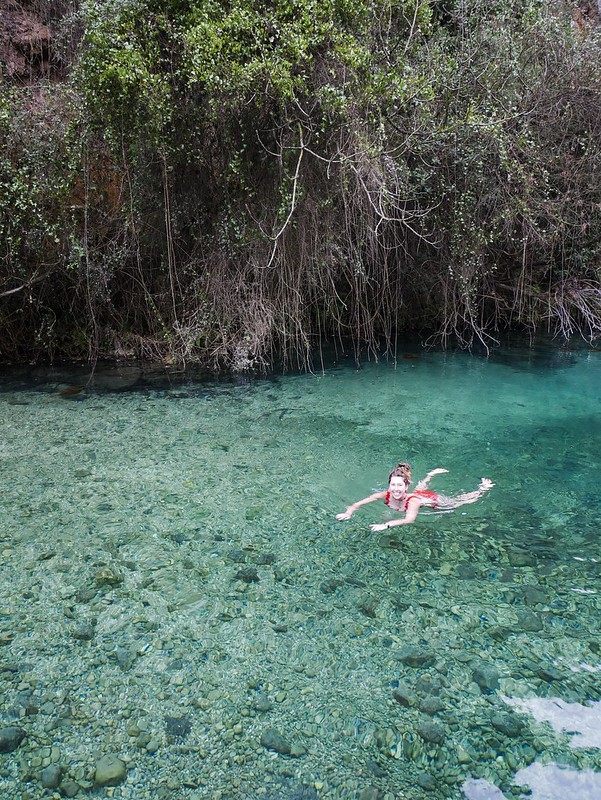 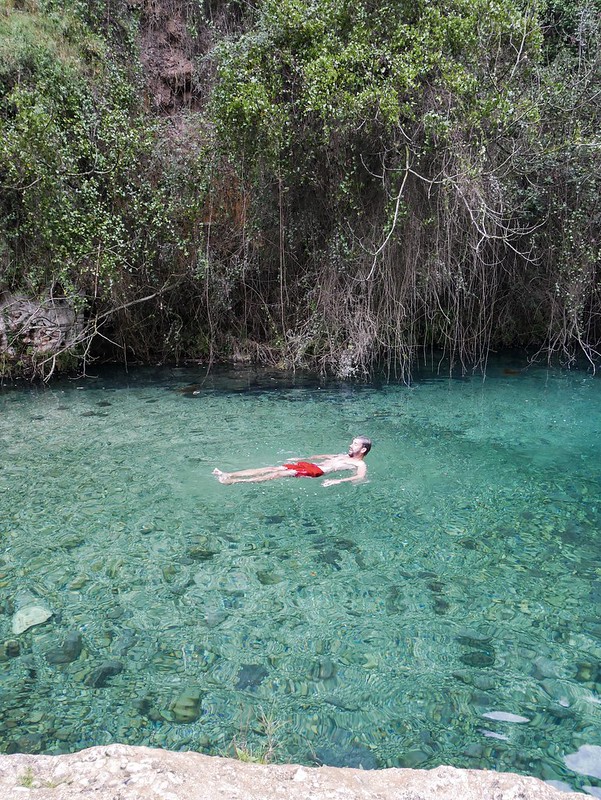 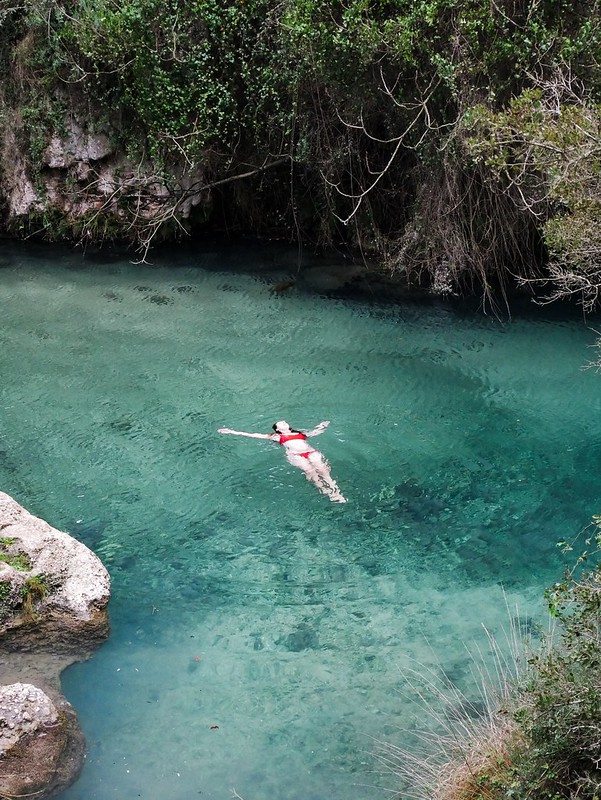 A short drive north led us to a village with a waterfall plunging down a cliff edge and into a pool. Before we reached the waterfall we noticed a bad smell, almost like the eggy smell of sulphur and we wondered if they had thermal pools here but we had a shock when we saw a drain was overflowing with sewage straight into the river!! The drain was literally on the river bank too which seemed like such a stupid location. So we were instantly put off by that one and there was no chance we were going for a swim. 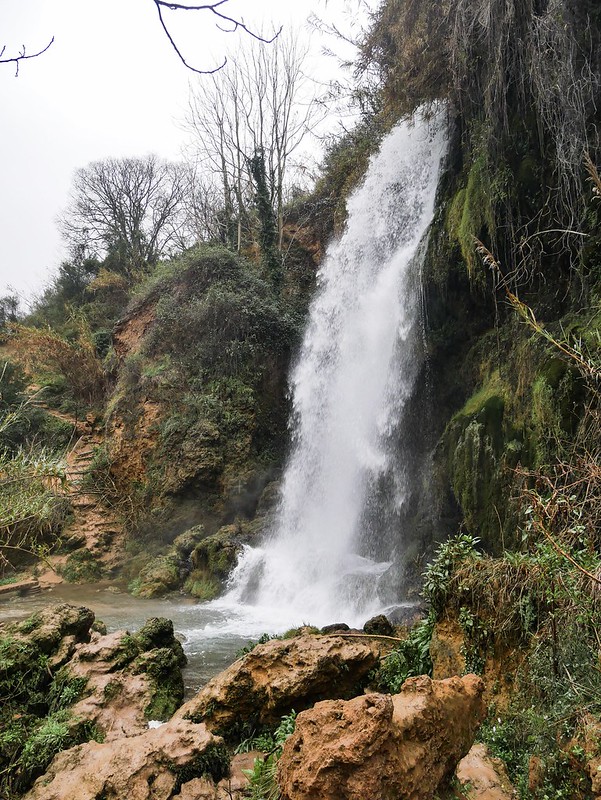 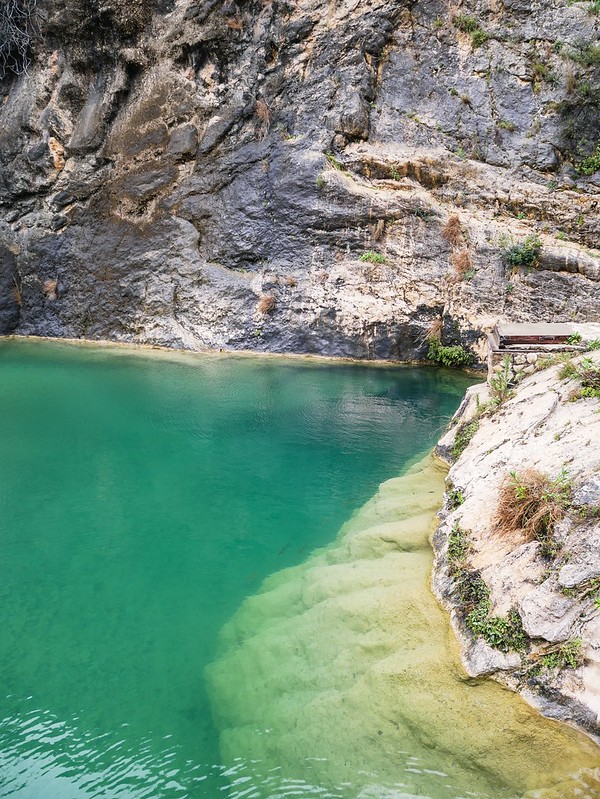 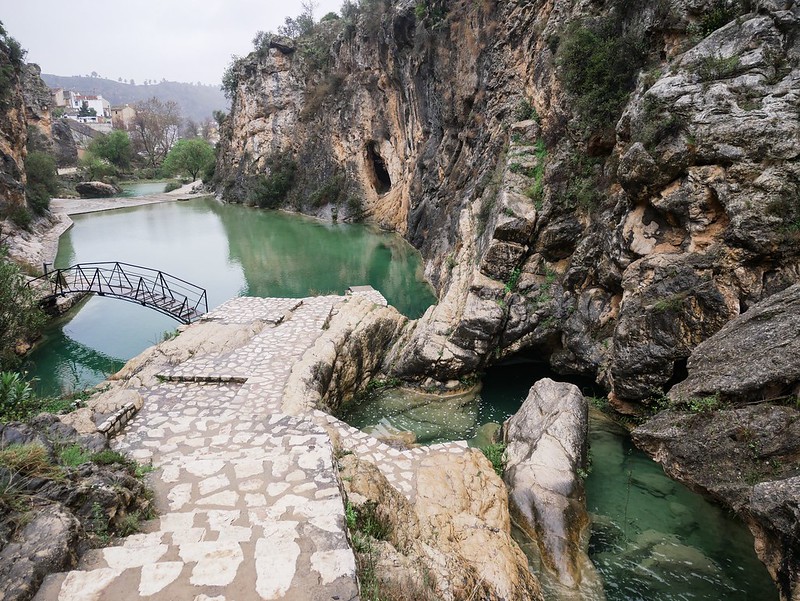 Our final swimming hole was set in a gorge below a small town. There was a huge crystal clear pool which went so deep in areas that we couldn’t even see the bottom. It was a really idyllic spot and I can’t imagine how nice it must be in summer but the wind was gusting through the valley and it was already 5pm so we decided to skip the final swim and find a quiet spot to camp for the night. The Saharan dust storm swept over Spain that evening which meant the sky was stained orange. It was bizarre as it looked like a sepia photo outside. 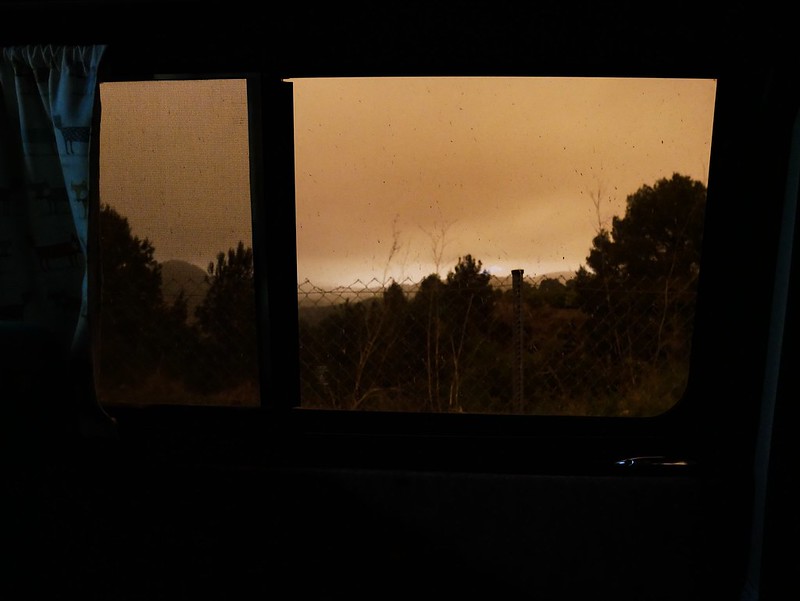 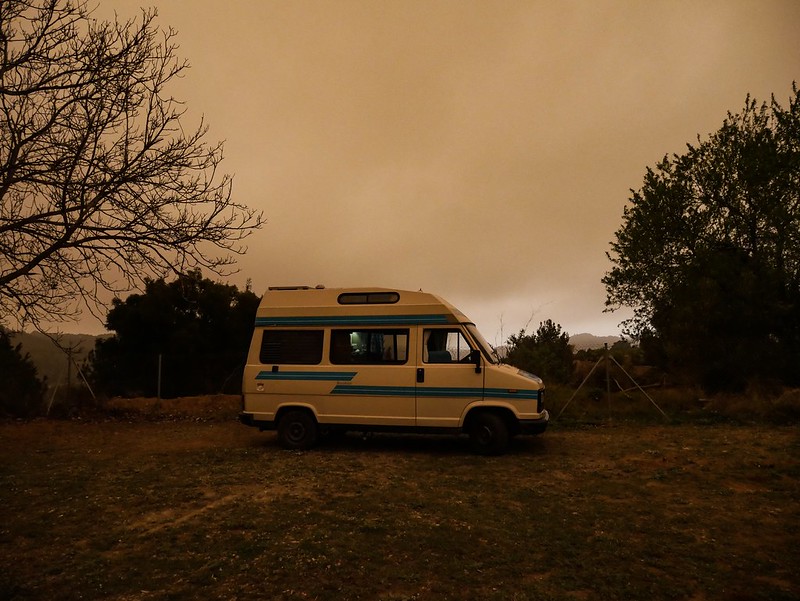 There was one more swimming hole we wanted to check out which was further north near Buñol. It was called Cueva del Turche and a waterfall trickled down a steep cliff face. The swimming hole looked very appealing but we were surprised when we stuck our hand in and realised it was much colder than the other pools we’ve been swimming in. So instead of a swim Craig had fun clambering behind the falls and over slippery, algae covered rocks while I admired the view. 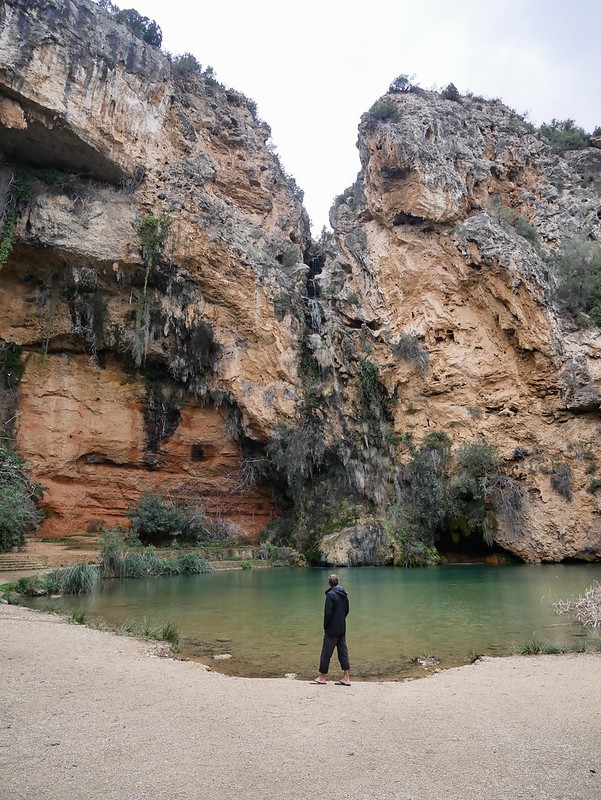 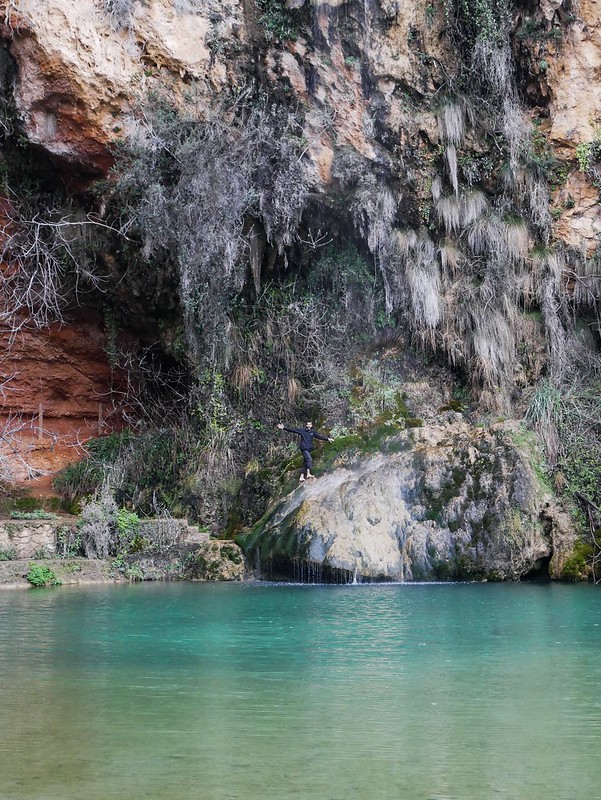