I really love the reservoirs in Spain, the ground must be mostly clay because it mixes with the water like a milky tea and creates the most incredible opaque blue colour. So today we were heading to yet another one, but this time we couldn’t park close to the water and we had a 13km walk to get there. Luckily we had a dirt track the whole way so walking was easy but we could tell someone had a very different experience; foot prints were imbedded in the clay road along with slabs of mud that had been scraped of the persons shoes after every couple of steps. We were so happy the road was dry today because we’ve already experienced a walk with sticky clay in Spain and it was dreadful. Craig even walked in the imprinted footprints and could tell they were tiny steps due to the heavy weight of the persons shoes. Poor bugger. The rain had collected at the bottom of the dirt track and we were shocked to see huge slabs of the clay road had totally collapsed. 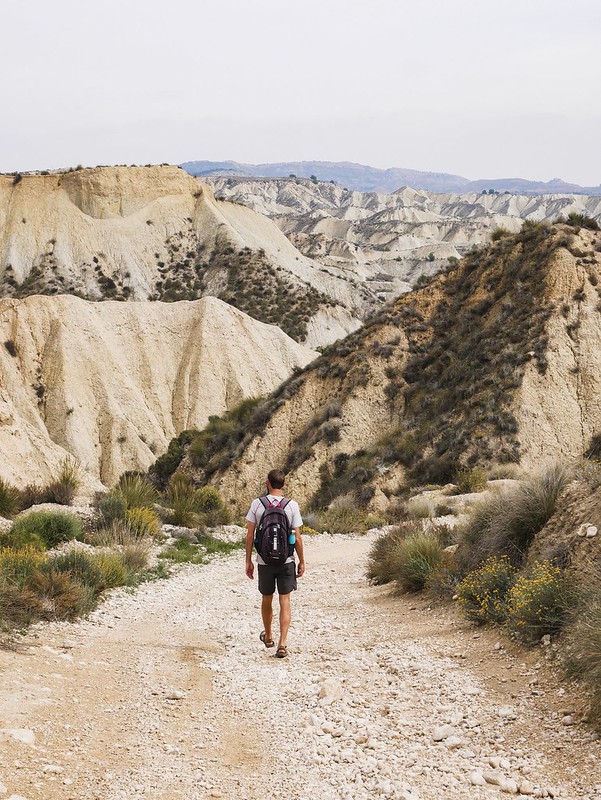 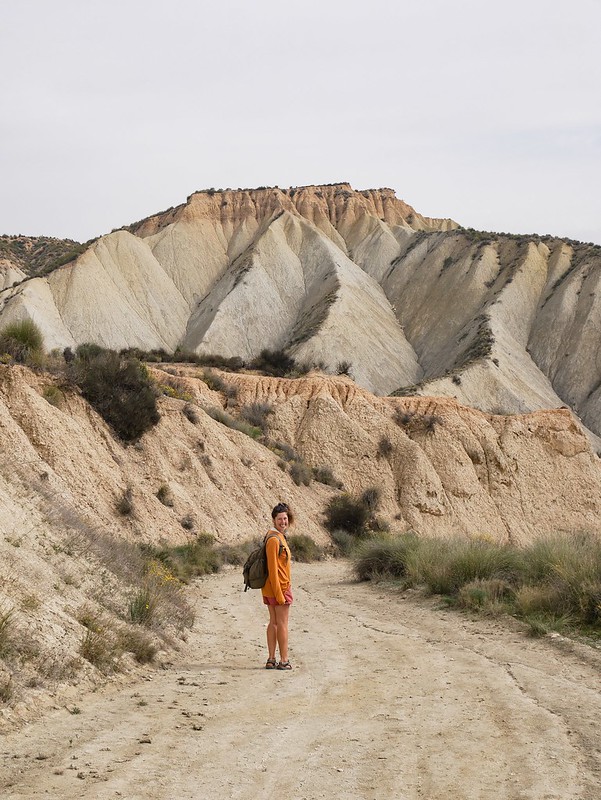 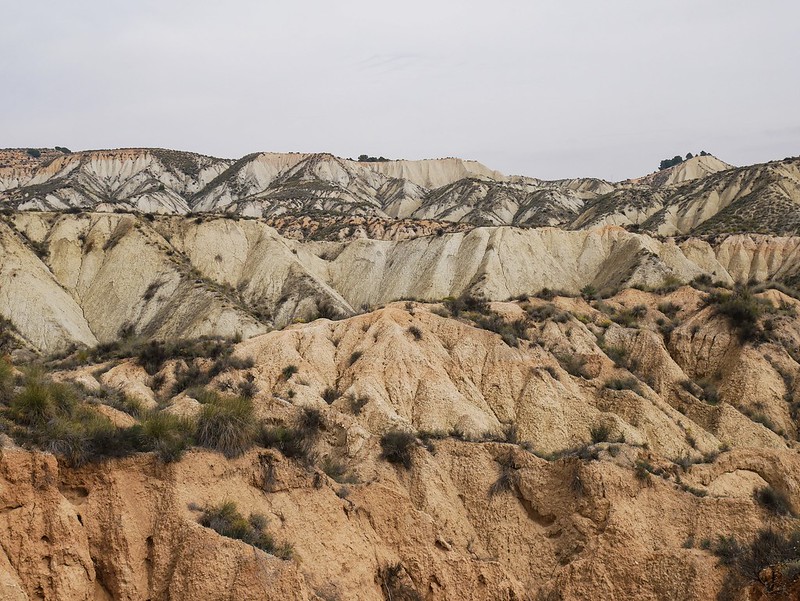 For most of the walk we were surrounded by badlands; rugged clay hills shaped and eroded by the elements. There were some pretty wild flowers poking out the ground and some had even grown on the dirt road so people put stone circles around them to try and protect the flower from quad bikes or people. We got our first few glimpses of the lake and albeit the weather was grey and gloomy it still looked a fabulous turquoise colour. The trail ended down some steps that led to the shoreline and I thought that was as far as we could go but seeing as there’s been such a drought in Spain we were able to extend our walk to an island which was now accessible from the land. The views along this section were the best of the hike with white badlands behind the colourful water. We followed a narrow ridge and hiked up to the summit of the island. Our plan was to have a picnic at the top but it was a smidge too narrow to relax so we found a lovely spot further down. 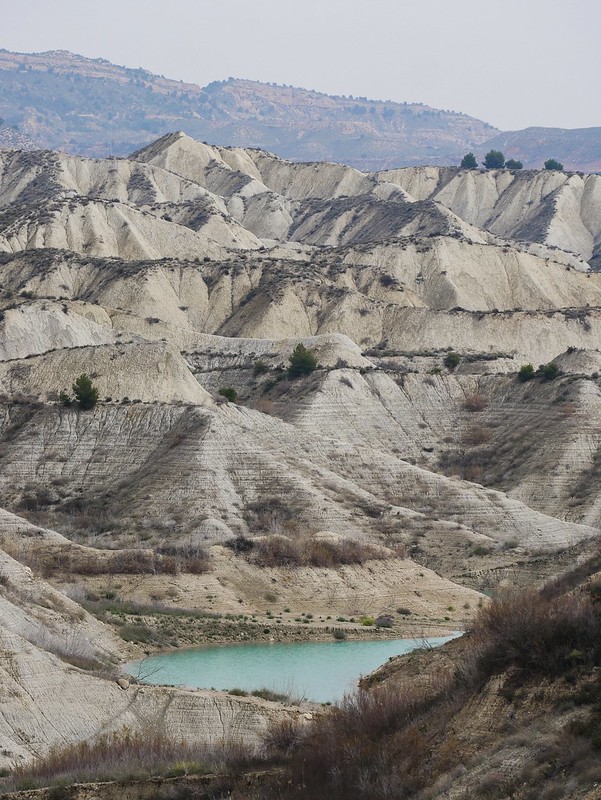 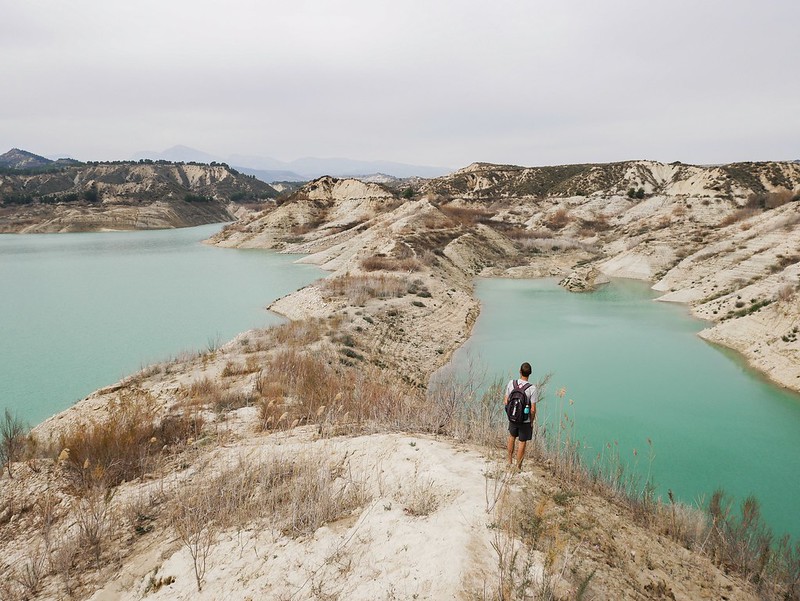 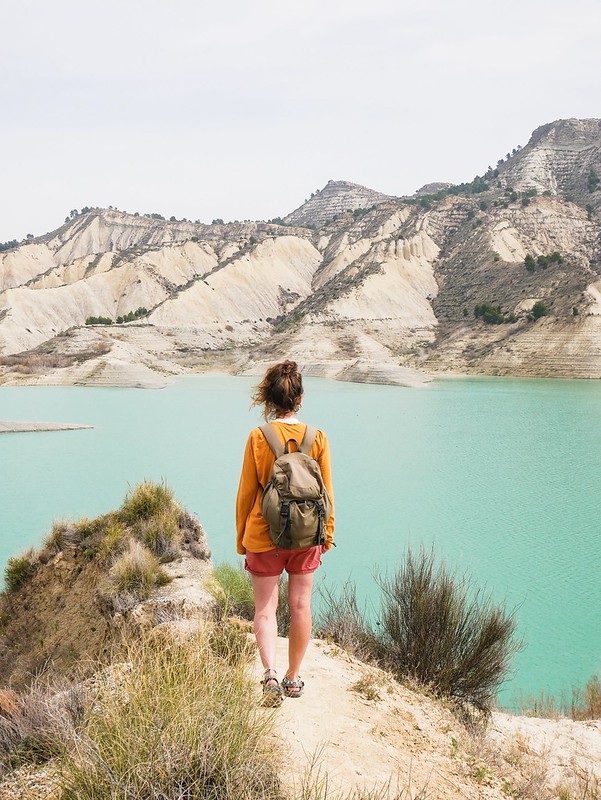 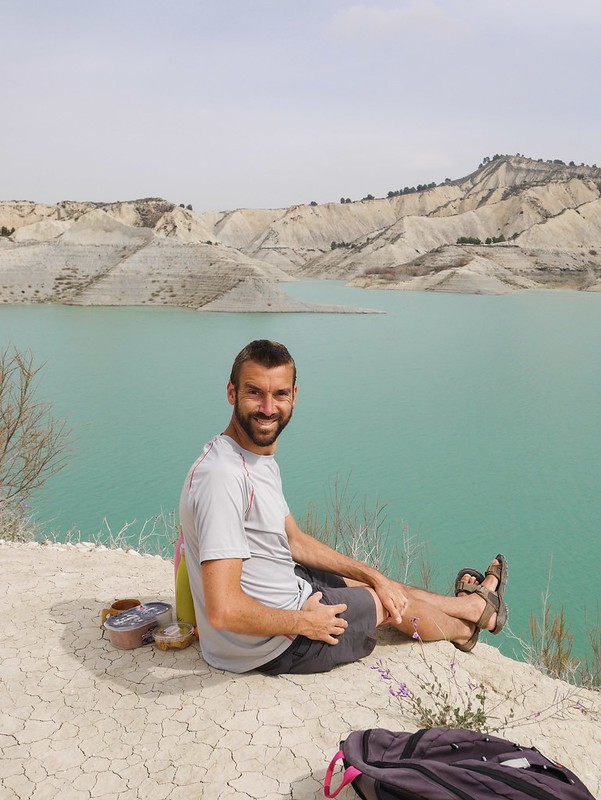 The route back seemed to take a long time. We took a slightly different route and ended up in an agricultural area with endless rows of orange and tangerine trees. So many of these juicy fruits were just sitting on the floor being wasted. We wondered what the farmer must do with the fallen ones, but then we saw a freshly picked area and noticed the fallen oranges were all left behind to rot by the look of things. So when we saw an orange that had rolled into the middle of the road we ate it.

The next day we drove to Bullas where there’s some swimming holes not far from the town. The main pool is described as being a ‘hidden oasis’ but we were very disappointed when we arrived. The setting was nice with a swimming hole encircled by rocky walls and a cave looking area at the back, but the water was all murky. It didn’t look appealing at all and there was no chance we were going for a swim. The water levels were probably low from the drought so maybe it needs more rain and flow to the river for the water to be clear. We didn’t waste anymore time there and headed off on a drive to a different area. 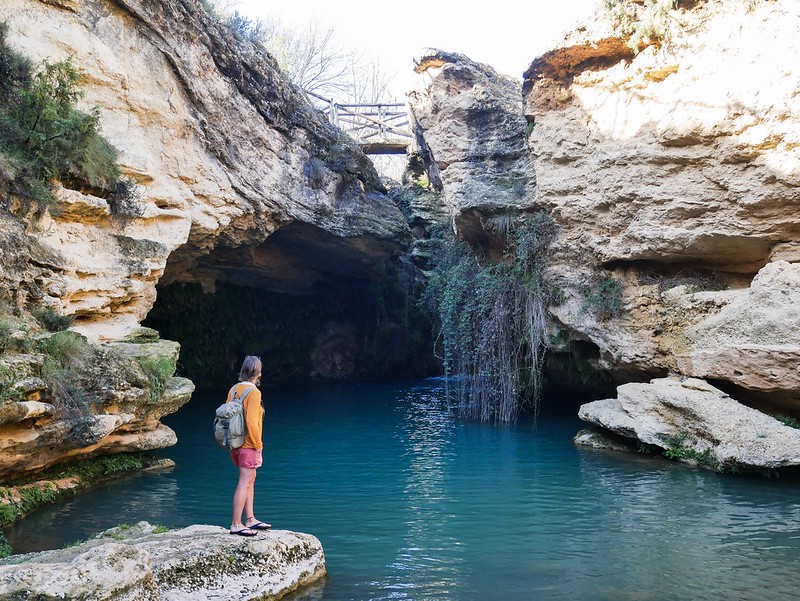 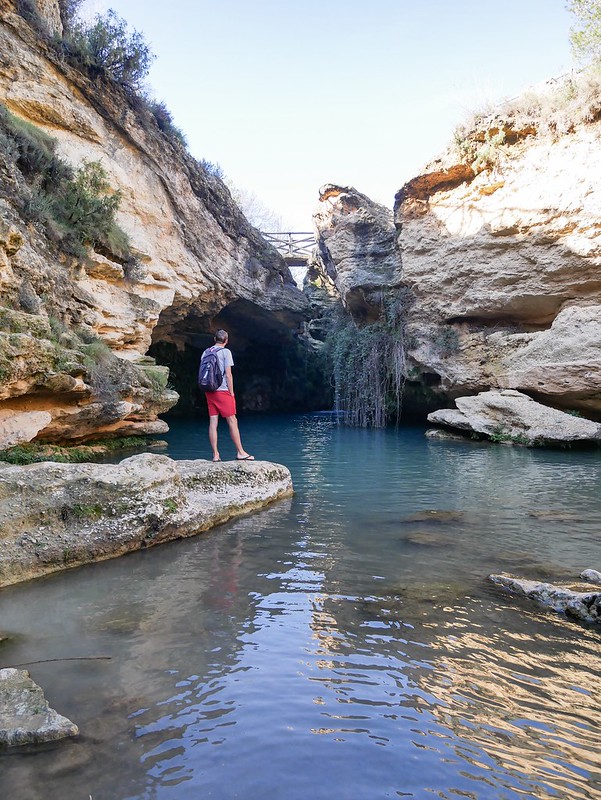 We took a very scenic country road to a lovely reservoir which we somehow had all to ourselves. We pulled up in a gravel area high above the lake and had an incredible view of the bluest water with peaks rising around. It was a little breezy and swimming wasn’t allowed so as tempted as we were to spend the rest of the day there we decided it was best to have a scenic lunch and then hit the road. We took more country lanes and then parked up outside an abandoned building for a 7km walk. It was actually a route we could of driven but the road looked very narrow on google maps so we opted to walk instead which turned out to be a great idea because it’s blossom season! The whole area was full of peach trees which are all in blossom right now and we were surrounded by a patchwork of pink fields. Some were so pale they were almost white while other flowers were an intense pinky purple colour. 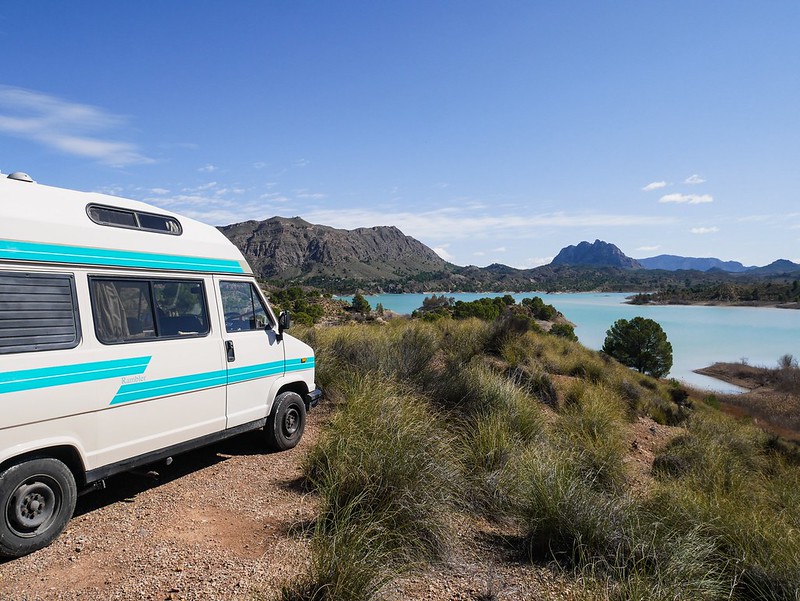 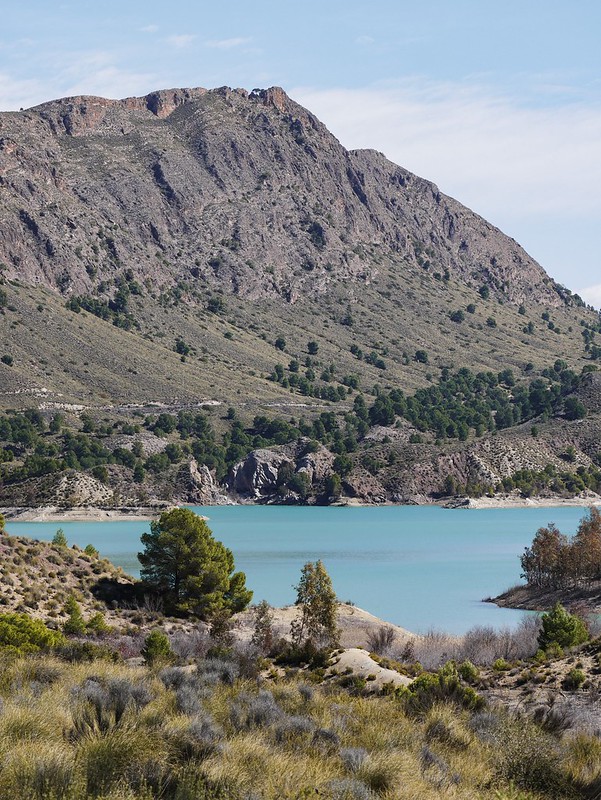 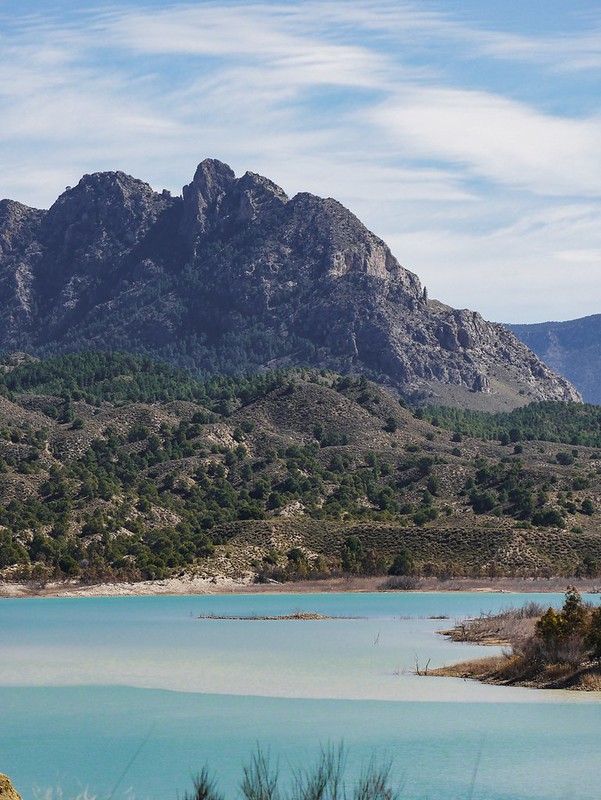 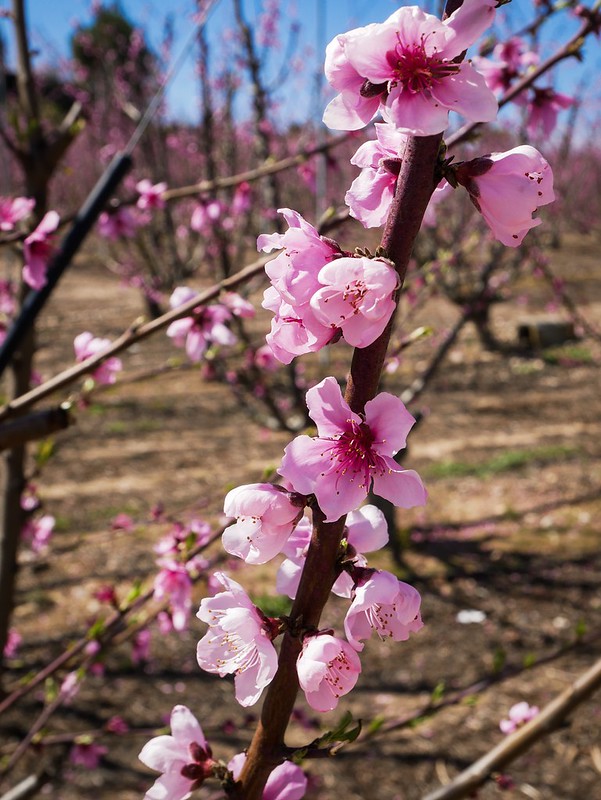 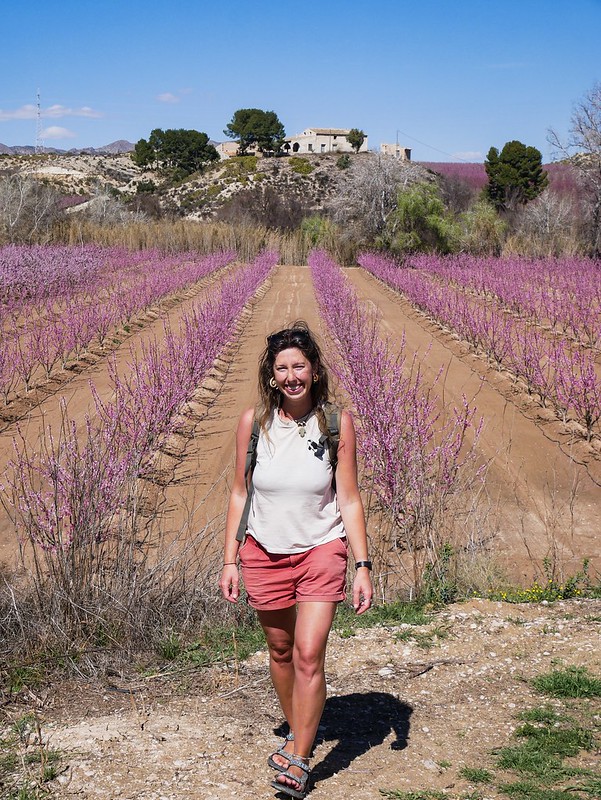 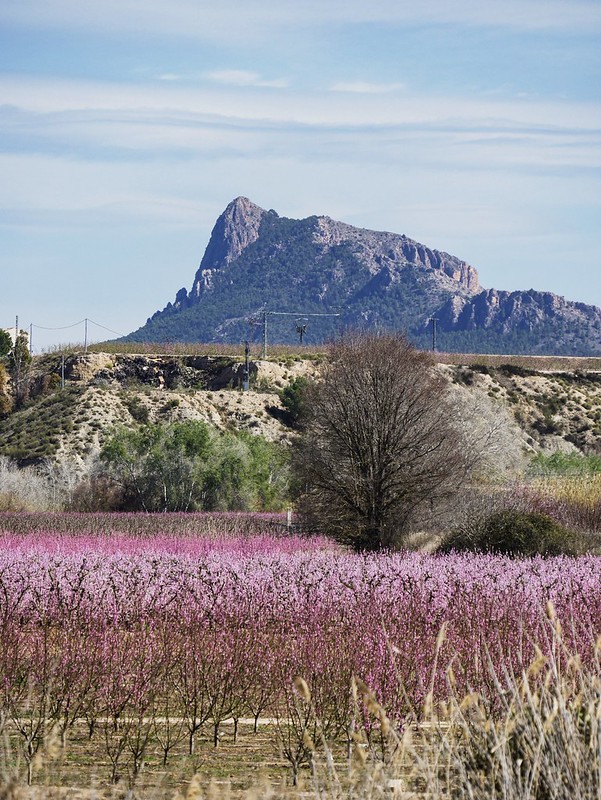 We arrived at an area high above the emerald river and there in the banks, surrounded by rocks and shrubbery was the reason for our visit; It was a fresh water spring and it looked incredible!!! We couldn’t wait to get there so we rushed down the rocky hillside, ran across a bridge and skipped for joy past a cliff wall until we arrived at paradise. It made the pool we saw this morning look like a murky pond in comparison. The water was pristine and as clear as gin. It was only a small swimming hole so you really wouldn’t want to visit on a busy weekend as there’s nowhere to sit while you wait your turn. Luckily for us we had the place to ourselves and it gets better, the spring was warm! 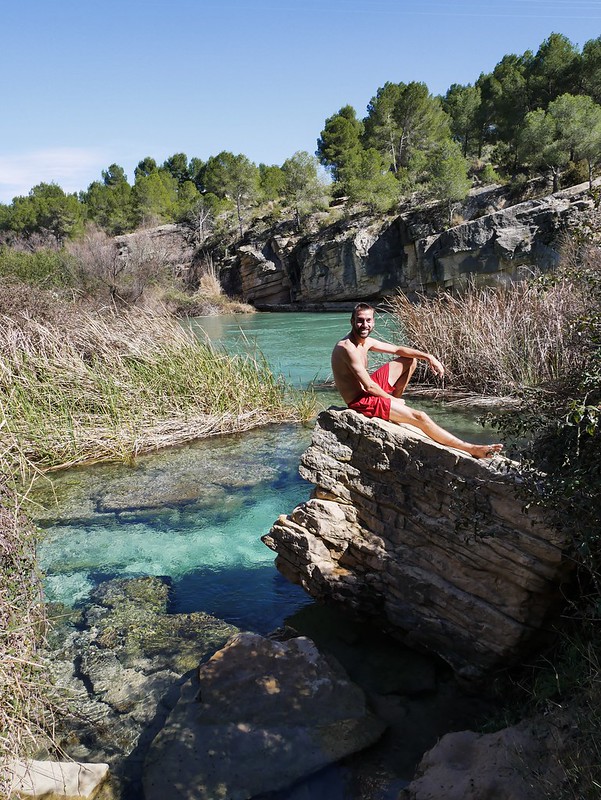 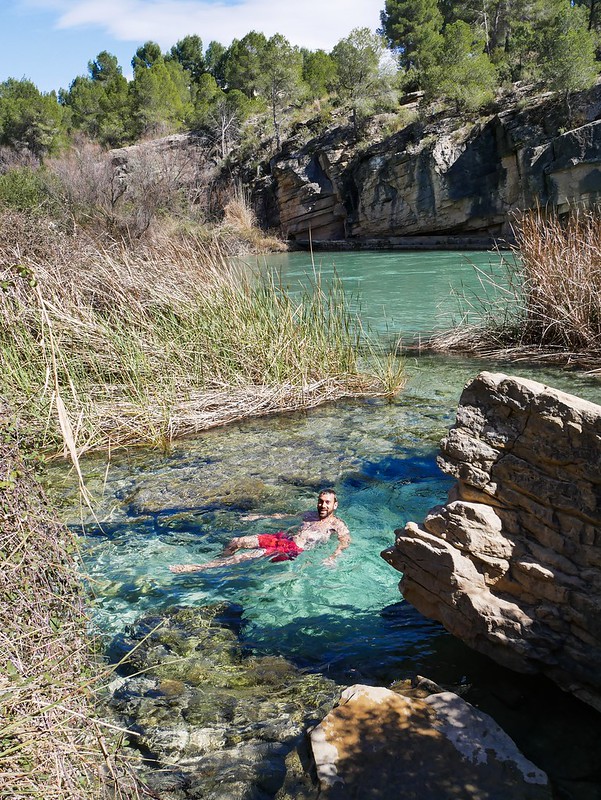 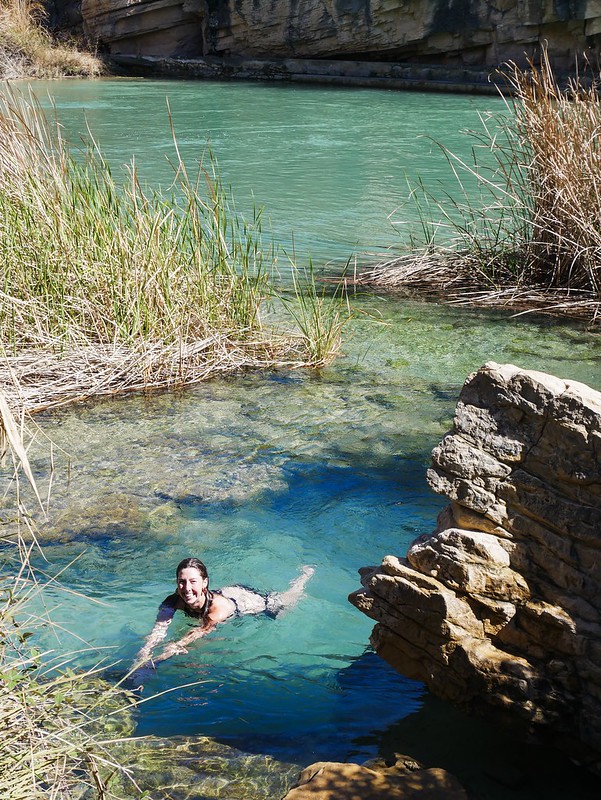 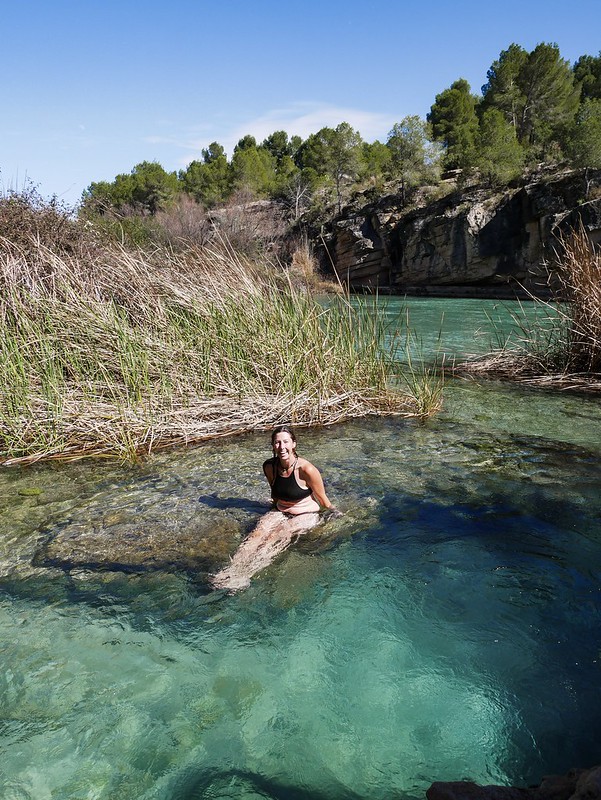 We thought it would be ice cold like a river but it had a slight warmth to it so we were in heaven. We had so much fun jumping off the rocks into the pool and it was definitely our favourite swimming hole in Spain so far. We also noticed that we could hear the spring pumping out fresh water, if we put our heads back we could hear a tinkling noise which was the gravel being blown around at the entrance of the spring. How cool! 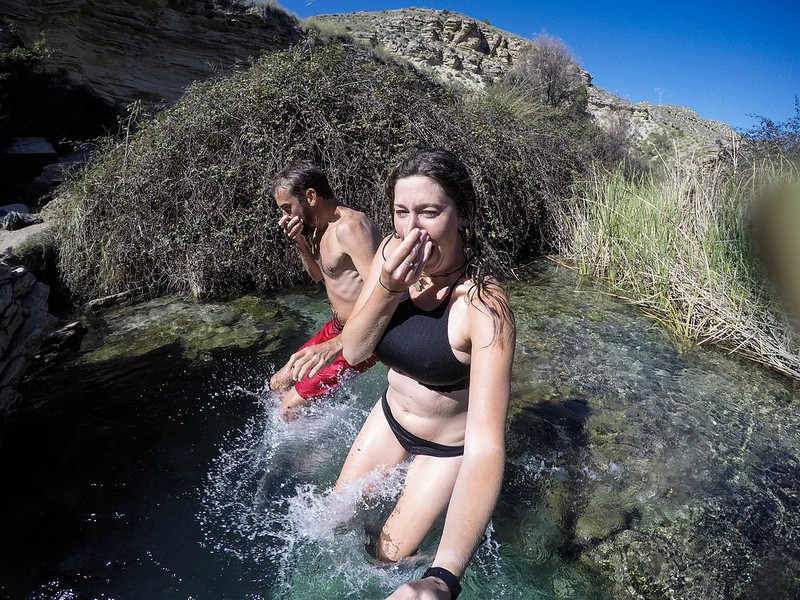 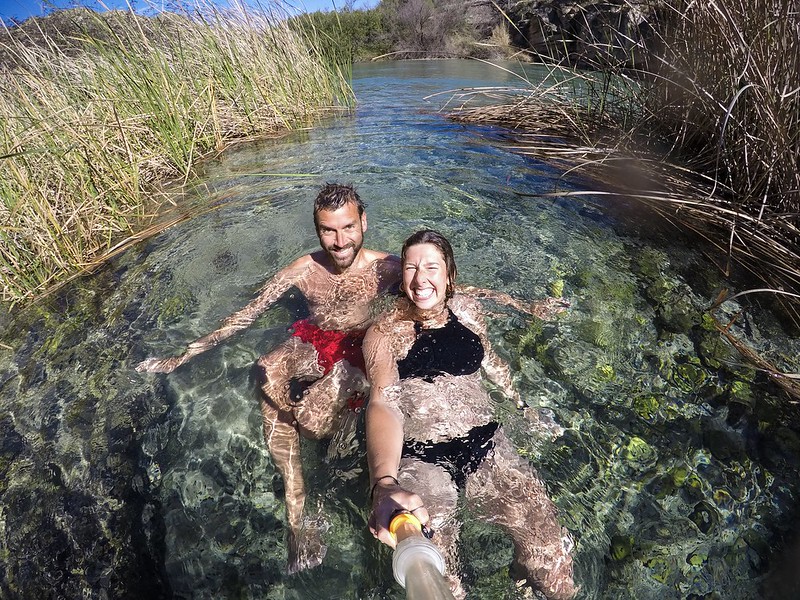 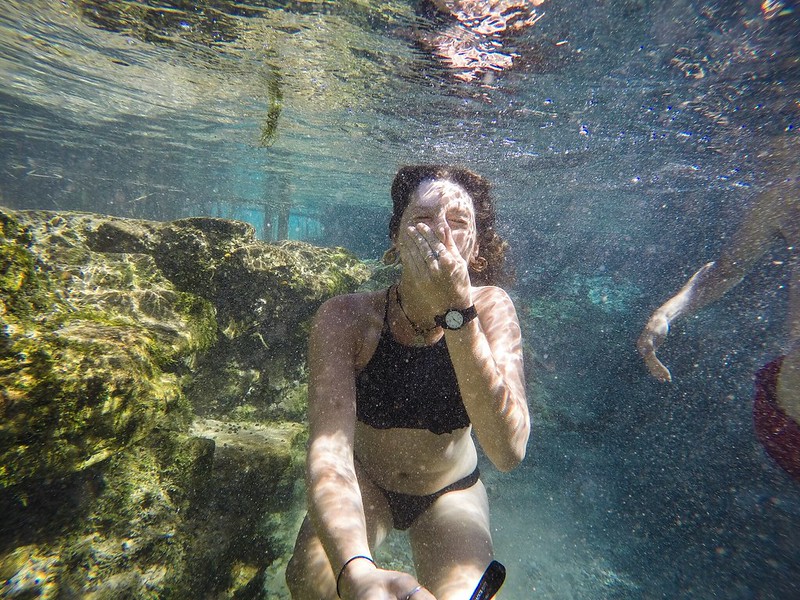 It was the late afternoon so we started losing the sun and soon enough a loud group of Spanish people arrived. They must be up there with the loudest people in the world, they don’t really talk they just shout. So we took that as our sign to leave and found a quiet spot above the river for some tea and cookies. The road wasn’t as narrow as we first thought and we really liked the area so we took note of a couple places where we could camp for the night and brought Helga back with us for a very tranquil night in the countryside. 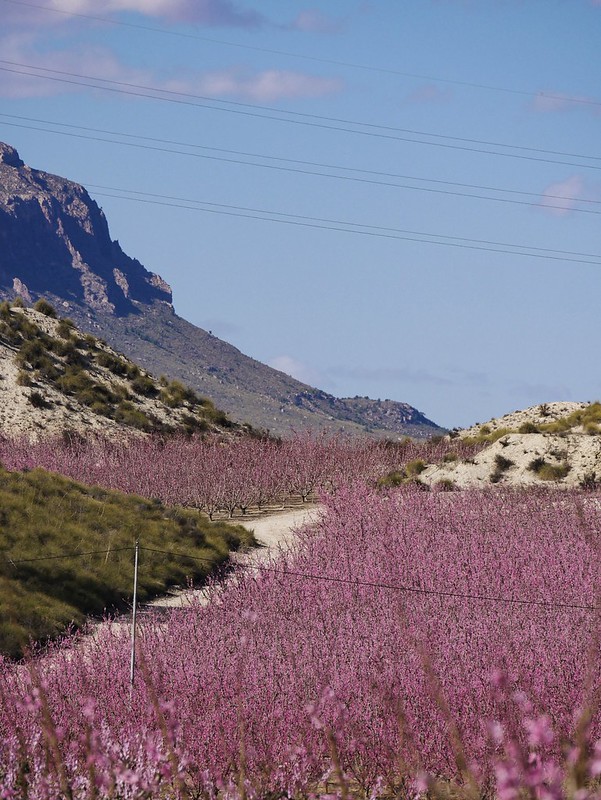 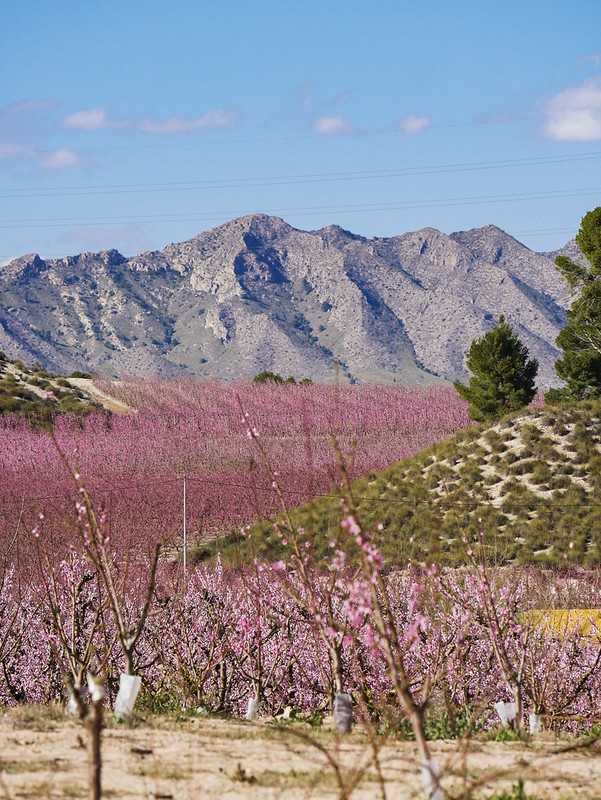 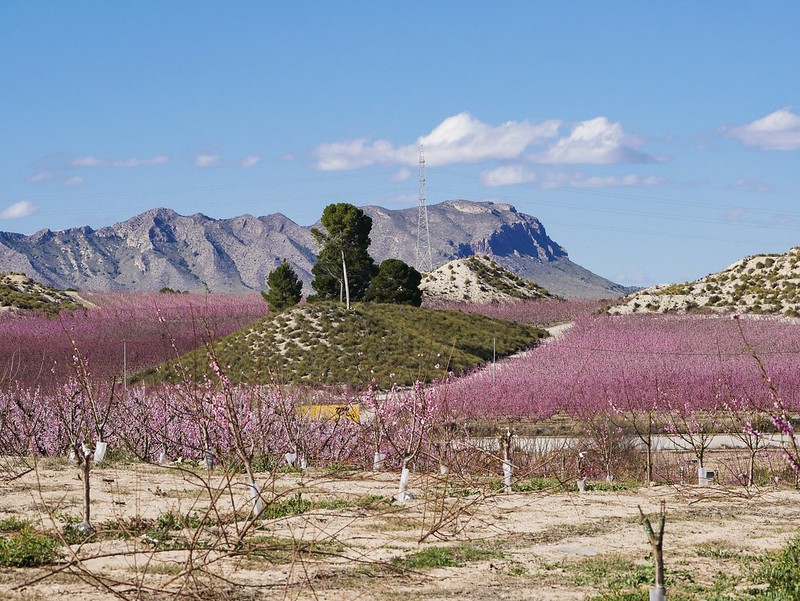