A 50km drive through the countryside led us to the coastal village of Bolnuevo where there were some interesting rock formations behind the beach. That was the main reason we came here and to be honest they weren’t that special as there was a big carpark between the beach and the rocks and they were fenced off too. To make the journey worthwhile we decided to go for a walk along the coast. It turned out to be a lovely route with some of the prettiest beaches we’ve seen in Spain. The beaches were more pebbly than sandy but that just accentuated the turquoise colour of the water. We were enjoying the walk so much that we decided to continue to three more little coves. As we arrived the water was twinkling in the sun and the palm trees were swaying in the wind…it seemed so perfect until we saw a naked man walking across the beach. It was a bloomin’ nudist beach so it meant I couldn’t even take photos of the pretty beach. 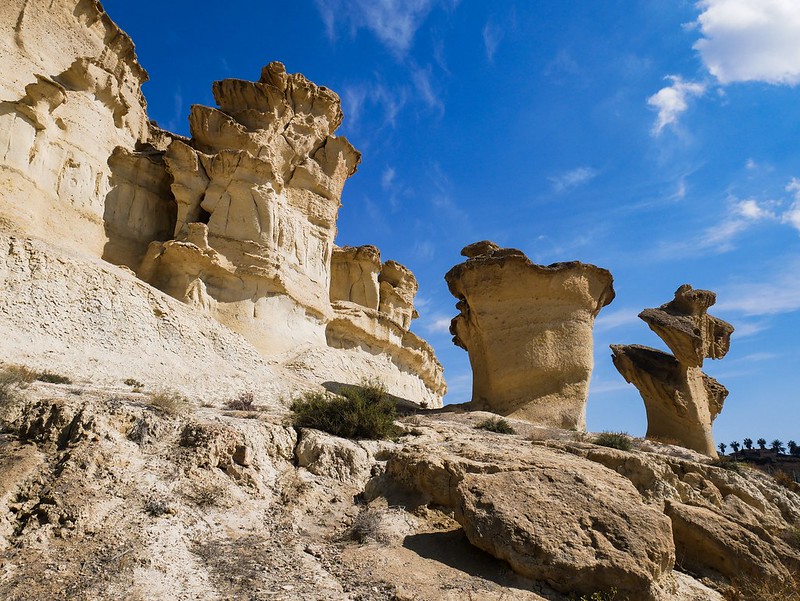 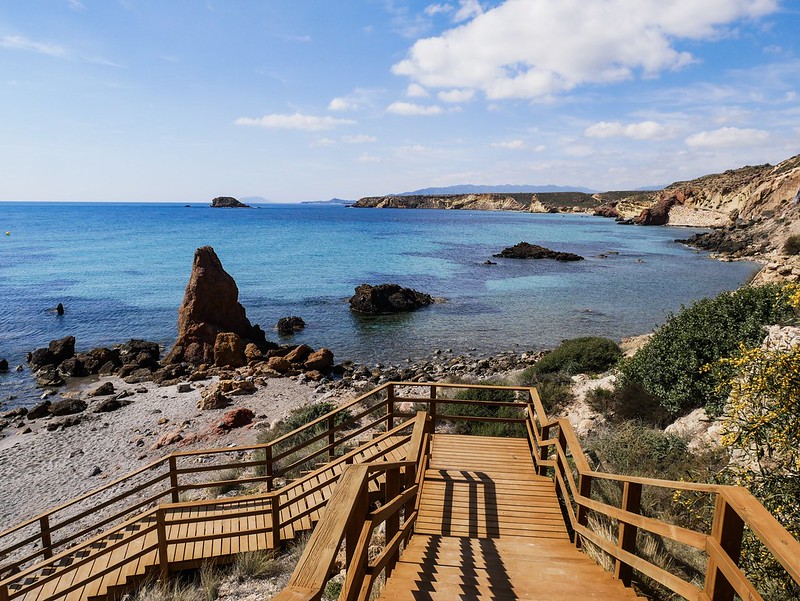 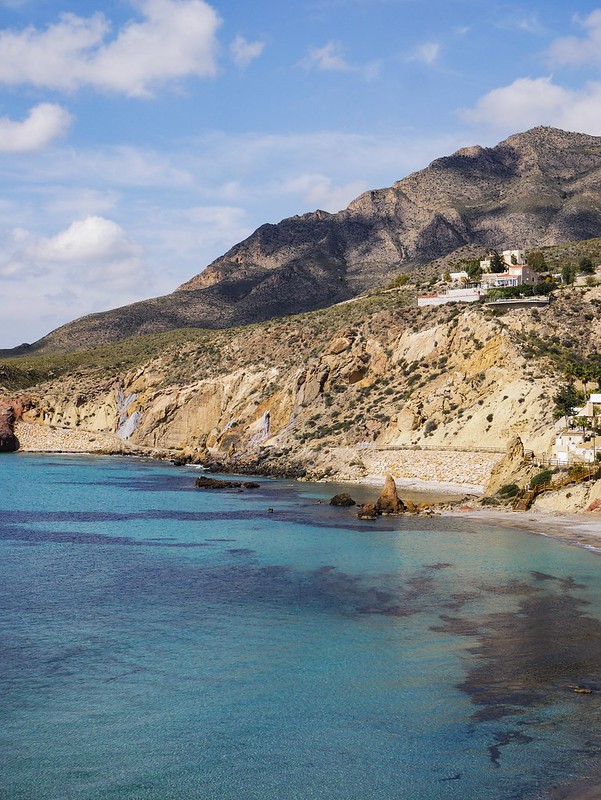 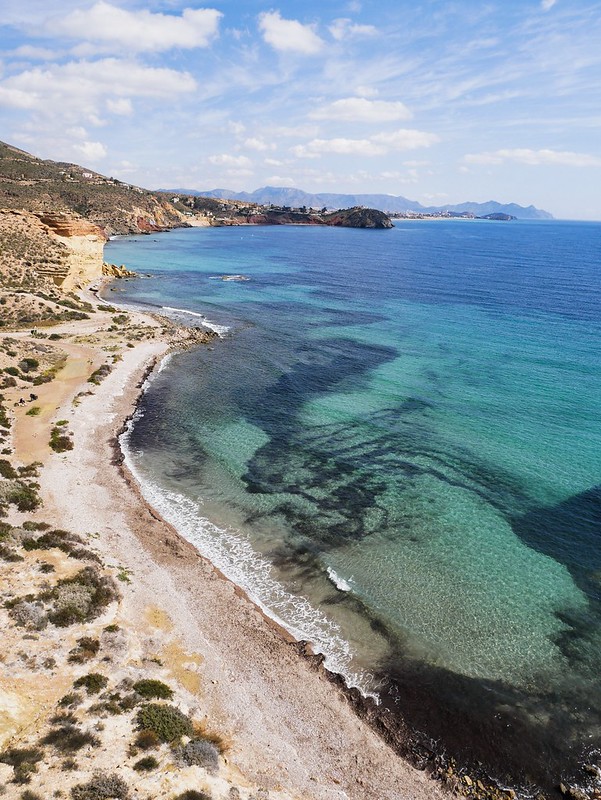 By the time we walked back to Helga the weather had really heated up and I fancied a swim in cold sea. I think all of the beaches were naturist ones but luckily the one we chose had four other people on it who were all clothed, hooray. We noticed a naked man walking through the sea towards our beach, excited to flaunt his pecker and droopy balls off to some strangers but he must’ve seen our swimwear and panicked so he pulled a u-turn and waded back to his beach. 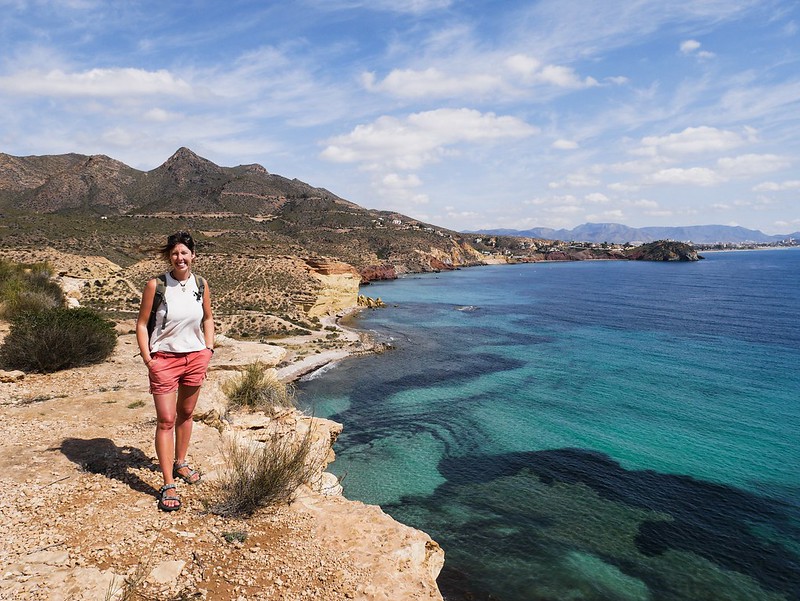 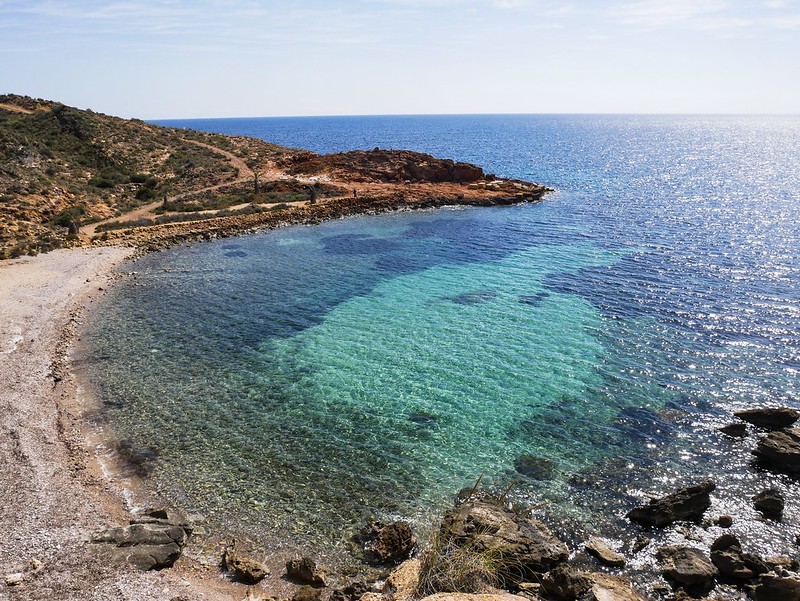 Not far from the coast was Mazarrón mine which is now abandoned but it has been mined since the Roman times with its peak in the 1840s. There wasn’t much parking and everyone had parked really badly which meant there were even less places available. So we just stoped on a dirt track beside a parked car and had the engine running, hoping for a car to leave. A man started chatting to us in Spanish but it was tricky as we just didn’t understand him, but he seemed to be saying he owned all the land to the left side and we could drive up onto his private land. Because we still had confused looks on our faces he ushered Craig to follow him up the road and in the meantime a cyclist was waiting to come down the dirt track. He was English and said to Craig something like “how am I supposed to get through?” to which Craig apologised and said “I won’t be a moment, I’m just looking for a place to park but you should be able to fit through”. Well, this guy was a stubborn twat of a man, he was about 60 years old and instead of going to the left side of us, or the right side of the other car, he went through the middle where he could still fit but it was a little tighter and he purposefully bashed into our van twice. What a bitter piece of shit. He left a long rubber mark along the side of our van which we luckily managed to get off but what the fuck?! We had our engine running and were about to move. The thing that made me feel slightly better was knowing he must have such a miserable life being that spiteful and karma will bite him in the butt.

We moved up to the guys private land but didn’t get the best vibe, there was a dog on a chain and I don’t know…I just felt like even though the guy seemed really nice we probably don’t have a leg to stand on if the van got broken into while on private land so we trusted our gut and luckily by the time we drove back down the road a car left and we nabbed the spot. Cor blimey, could’ve done without that stress. Finally we set off on a stroll around the mine and it was a pretty cool one to explore. There were plenty of abandoned buildings and amazing coloured hills with terracotta and magenta tones. It was the same style hills as in the badland deserts we’d seen in Andalucia but with way more colour. It felt like we were exploring another planet! 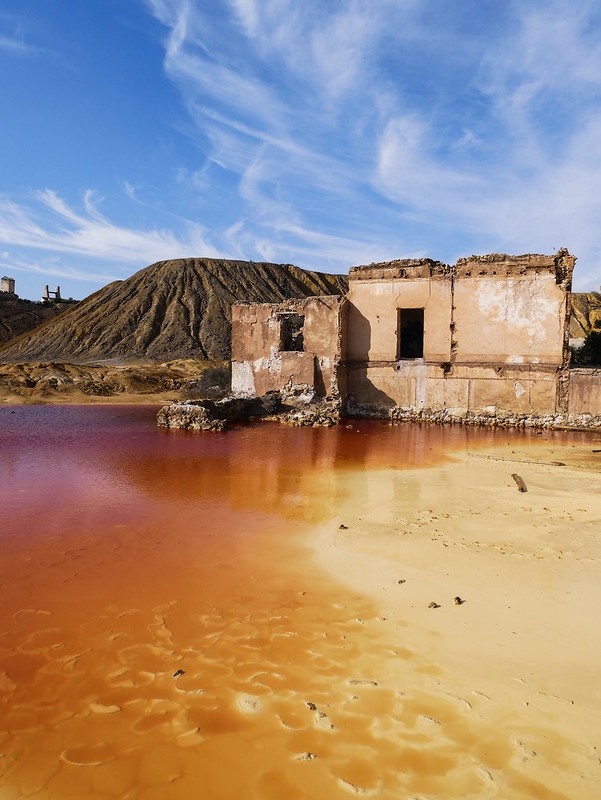 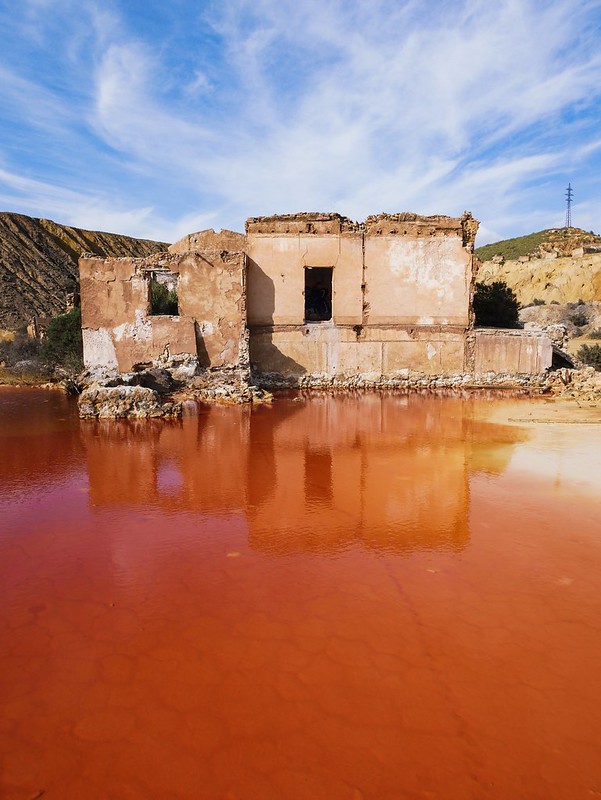 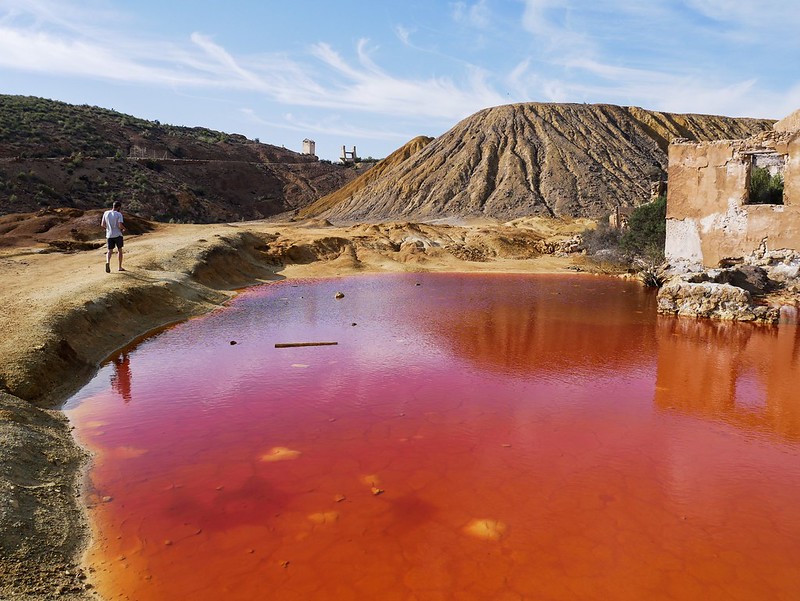 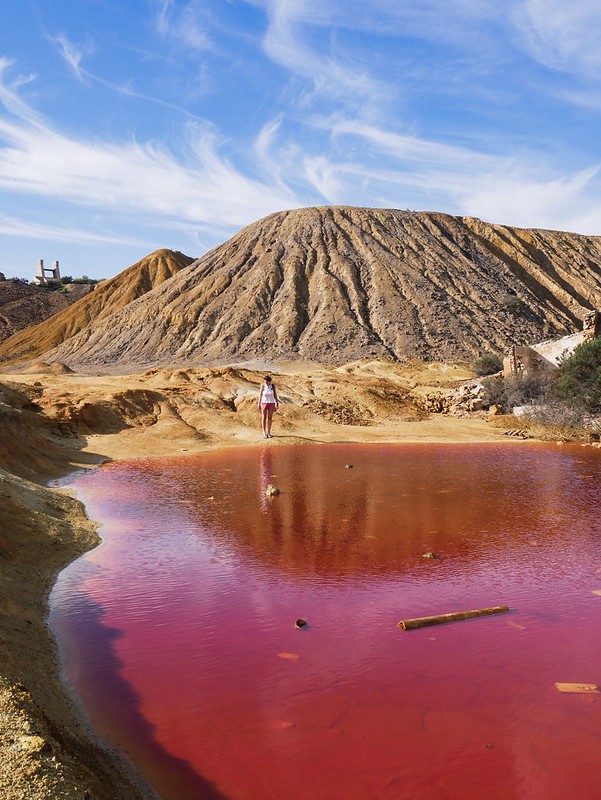 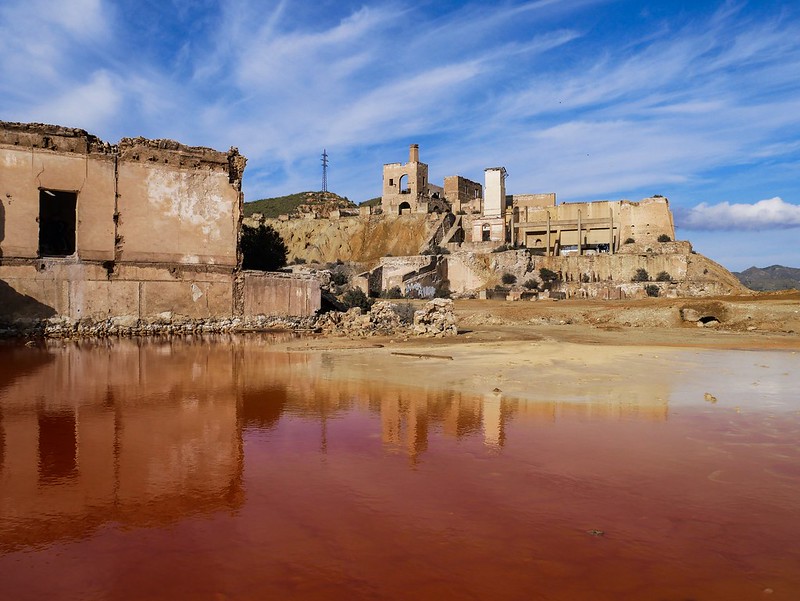 My favourite part was the rainbow coloured puddles which were stained from the minerals. It made me wonder what would happen if I poured a little water on the ground, would it just turn an intense red or orange colour? The main pool was blood-red but it changed as we walked around and had more of a pink hue. The next pool was orange and reflected two terracotta coloured hills which were shaped like volcanoes. 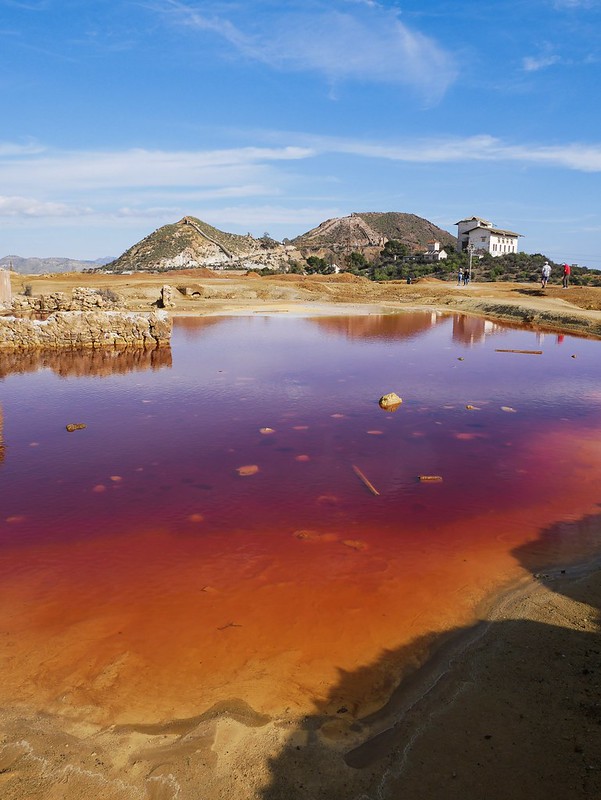 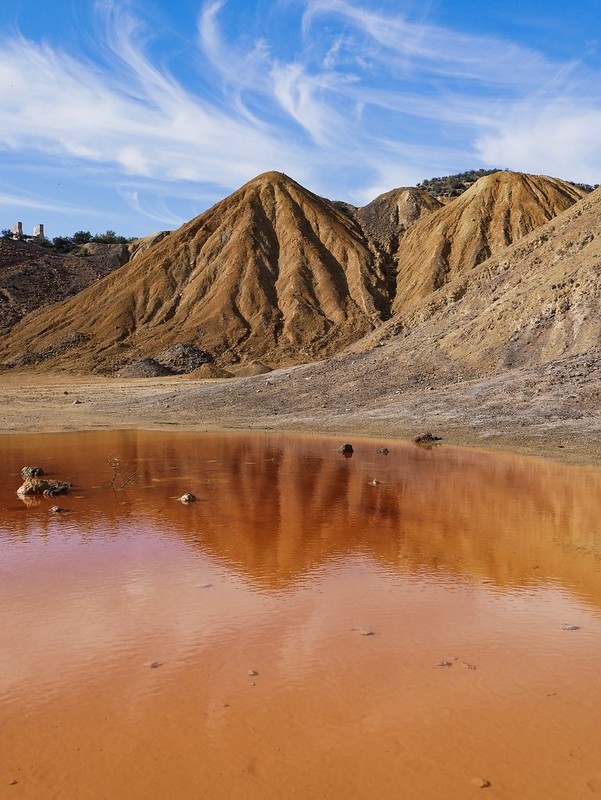 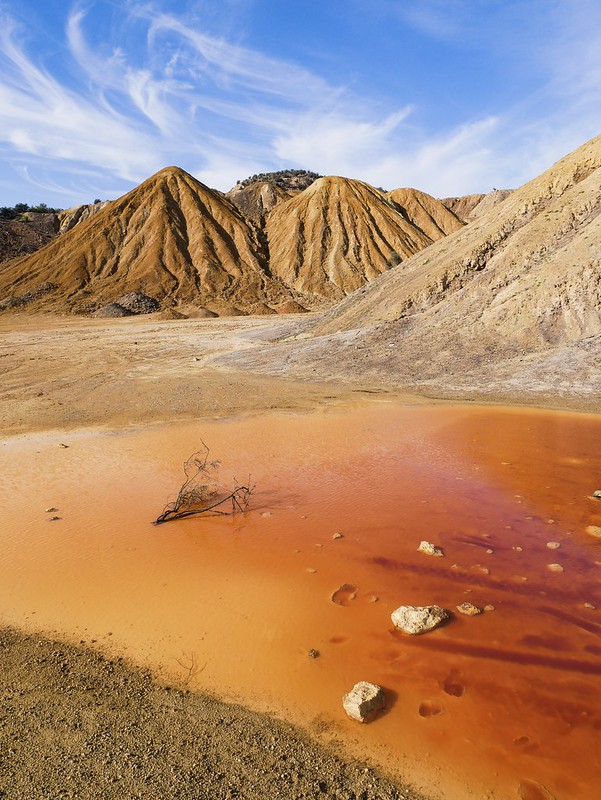 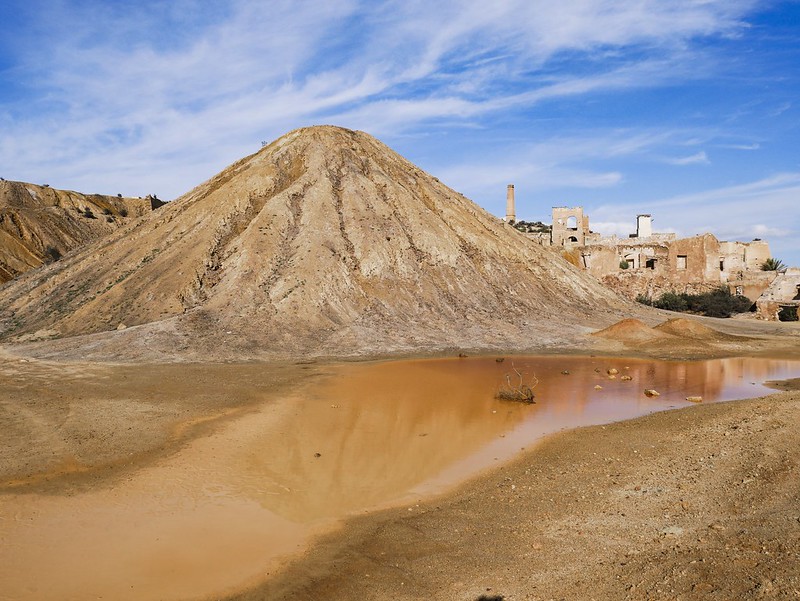 The mines spread over quite a large area and we ended up standing below a huge metal tower. It had a sturdy ladder leading up at an angle but Craig became giddy when he was just a couple of meters up. Then he had a look at the hole below the tower and got even giddier. I carefully peered over the edge and I couldn’t see the bottom. It was the creepiest, darkest black hole with no end in sight. I’m so surprised they haven’t filled it in or put a grate over the top, as a thriller lover I couldn’t help but imagine a great story plot where a murderer dumped bodies in this hole. After a fun hour exploring the ruins we headed inland again, the coast is lovely but it’s noticeable busier with motorhomes everywhere, I’d hate to be here in summer. 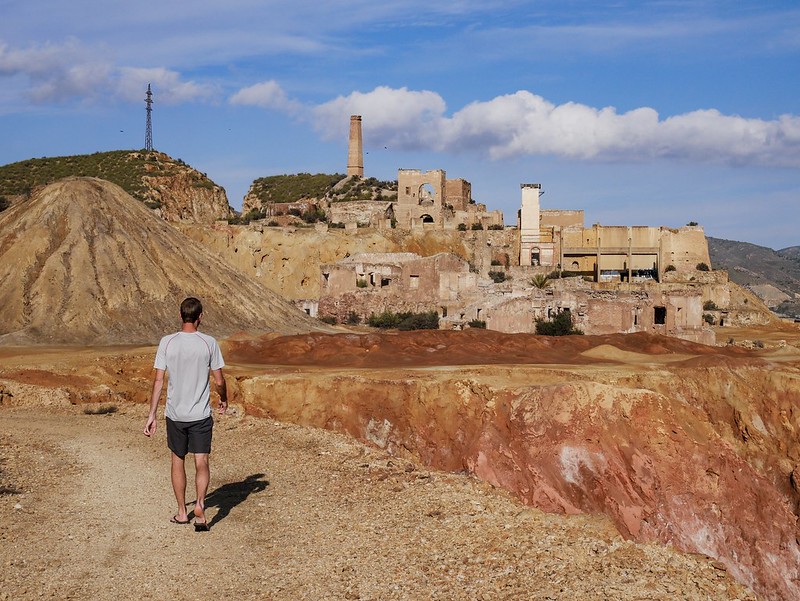 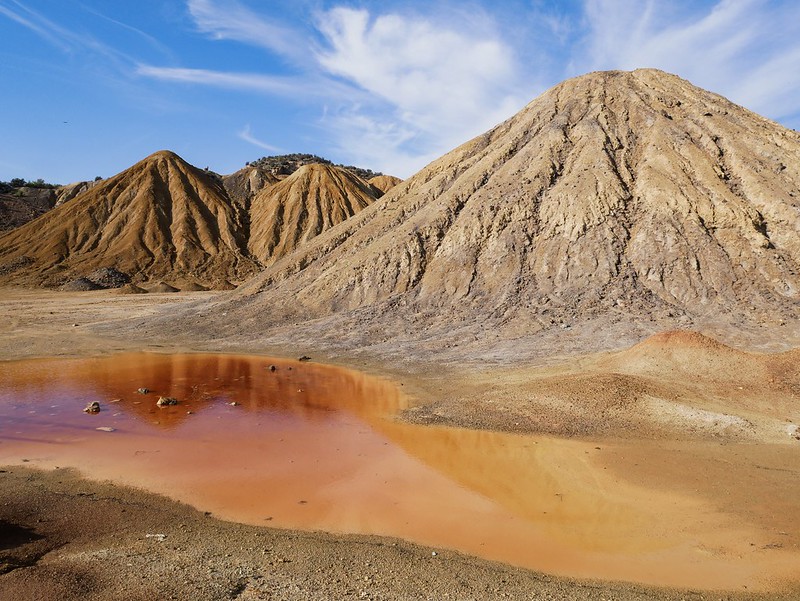 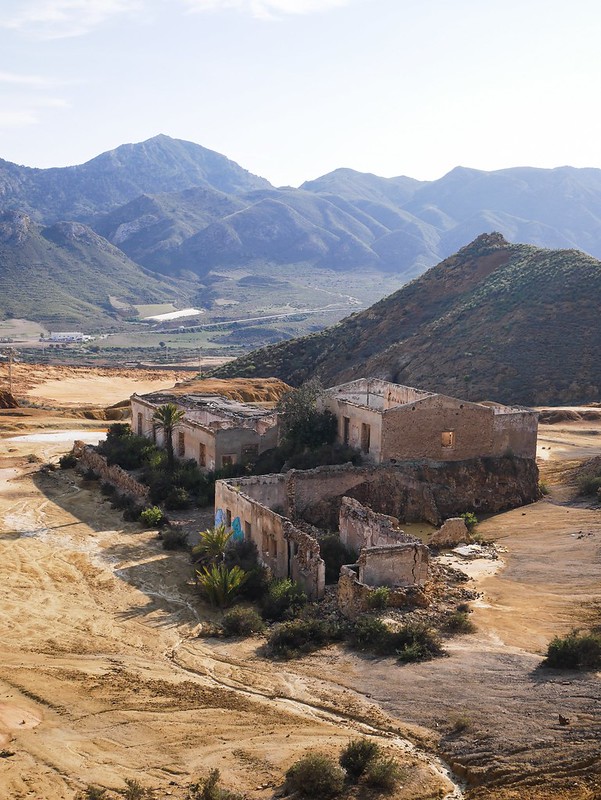 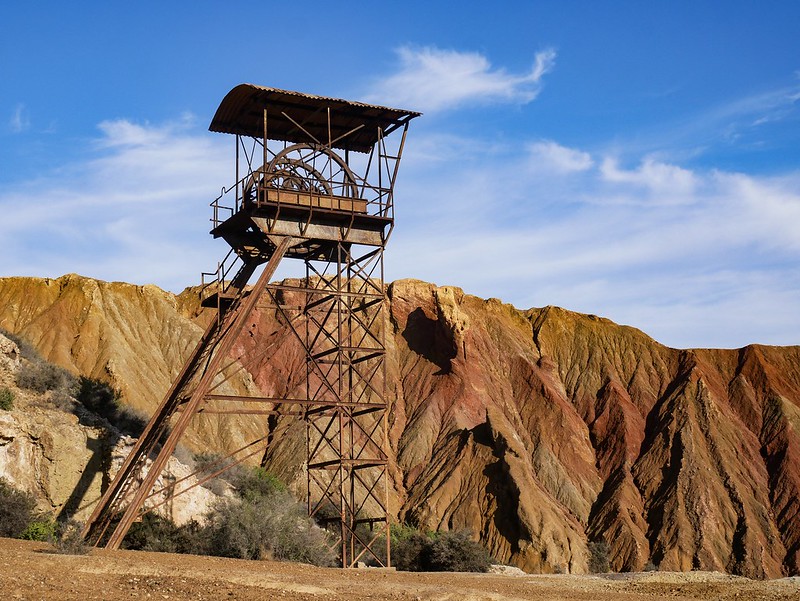 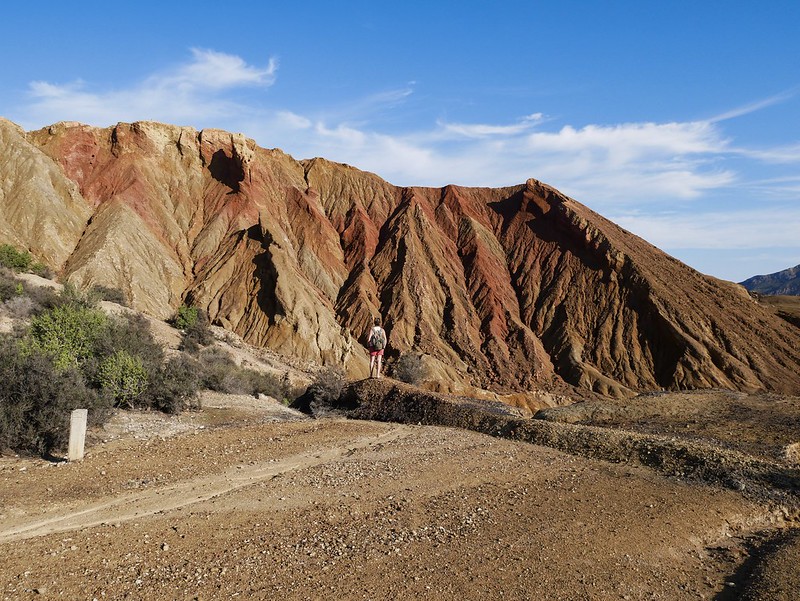