Not far from Malaga is a mountainous area that’s known as ‘the Pyrenees of the south’ due to the impressive pointy mountains. Of course we wanted to go hiking in the area so we headed towards the village of Alfarnatejo which is the starting point for the main hikes. The weather wasn’t great for our visit with thick cloud but we parked up with a lovely view of the peaks, ready for an early start tomorrow. 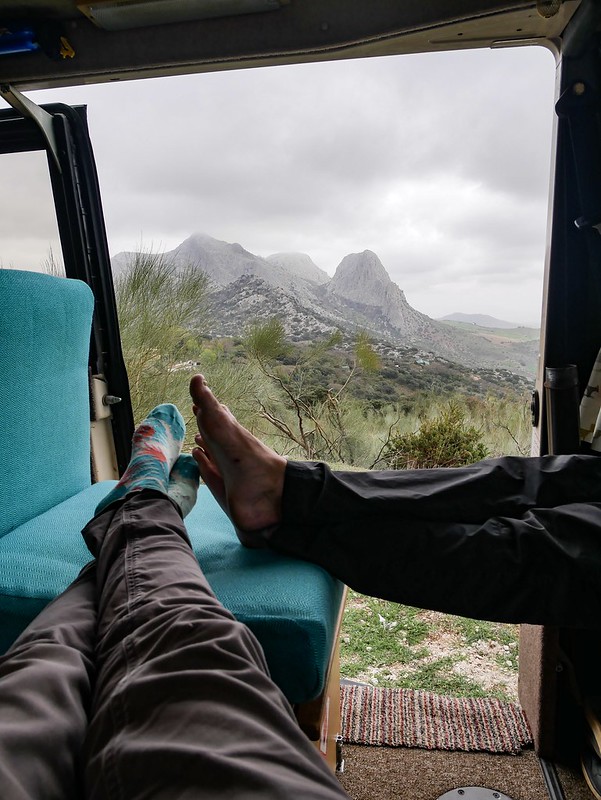 The weather wasn’t much better the next day but we continued with our plan and followed a dirt track down the valley. Suddenly the track changed to a muddy clay and we could instantly feel our sandals sticking to it. My goodness it was horrendous! Our sandals became so heavy with mud that they were weighing us down. We had to constantly stop to scrap the mud off and I could barely go three meters before having to stop again. We ended up on a slightly less sticky track and found a water source so we gave our shoes a good clean hoping to start from scratch. But it didn’t go to plan, we ended up on a different sort of trail with loose mud like a cheesecake crumble. The mud easily infiltrated my sandal ledge and spilt over my toes. I tried scraping my feet on the grass but the dewy ground mixed with the crumbly mud to make a chocolate sauce that smothered my feet. Argh! What a mess. On the plus side we had a fantastic view of Tajo de Gomer, the most prominent of the three peaks which looked like a tigers tooth pointing towards the sky. 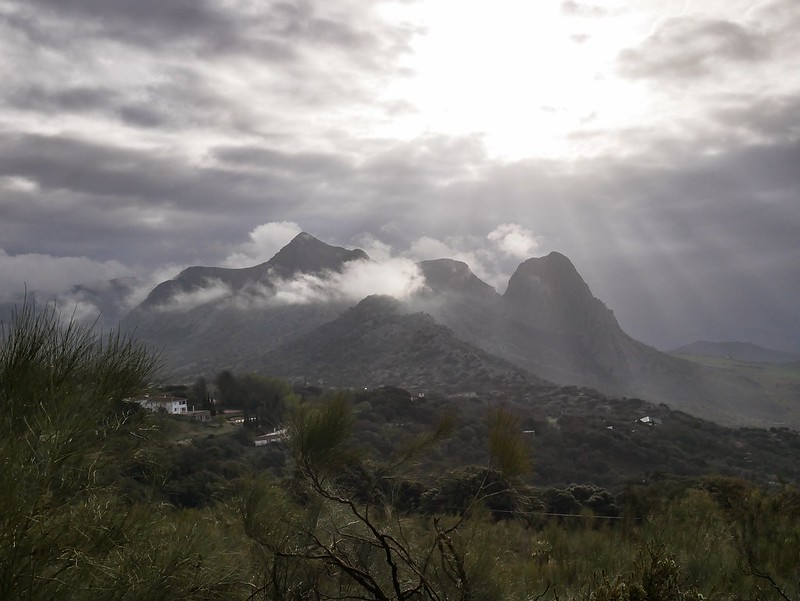 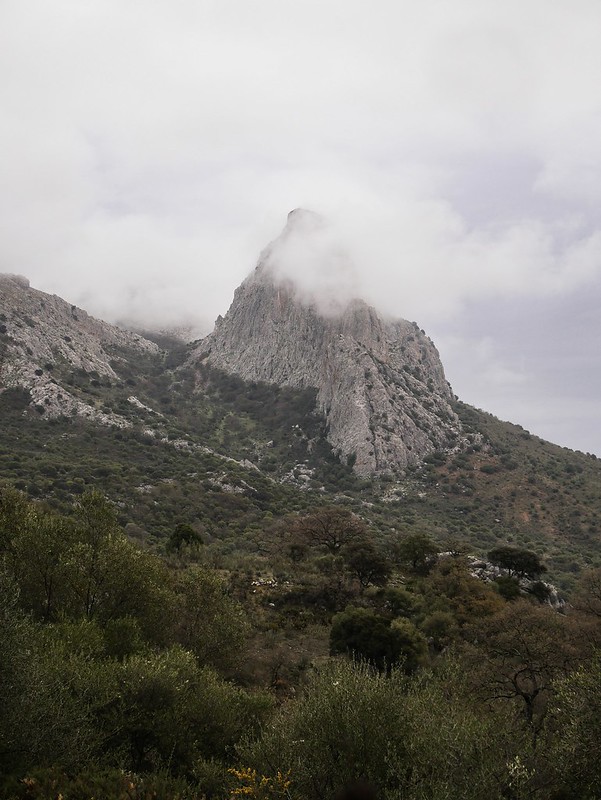 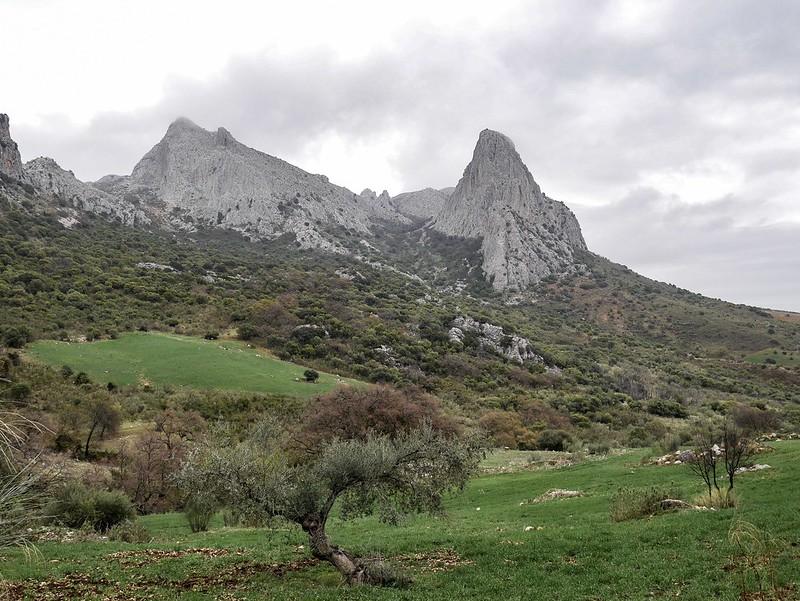 Our original plan was to do a large loop hike around the mountains but with poor condition of the track we decided to climb up the rocky summit instead. It was a scramble to reach the top and required our hands to help navigate steep sections but we eventually made it up for a rather anticlimactic view. It was a classic case of what would you prefer: live in a mansion with a view of slums or live in the slums with a view of the mansion. We were sitting atop the most impressive peak with a view of the other, bleak, rocky mounds. To be fair it would probably be a great view on a sunny day but the weather has turned extremely hazy of late which means the long distance views are uninspiring. After having a cup of tea cloud began swooping around us and we made a quick escape. By the time we got back to Helga we were engulfed in dense fog. The hike was only about 8km yet it took us 6 and a half hours!! 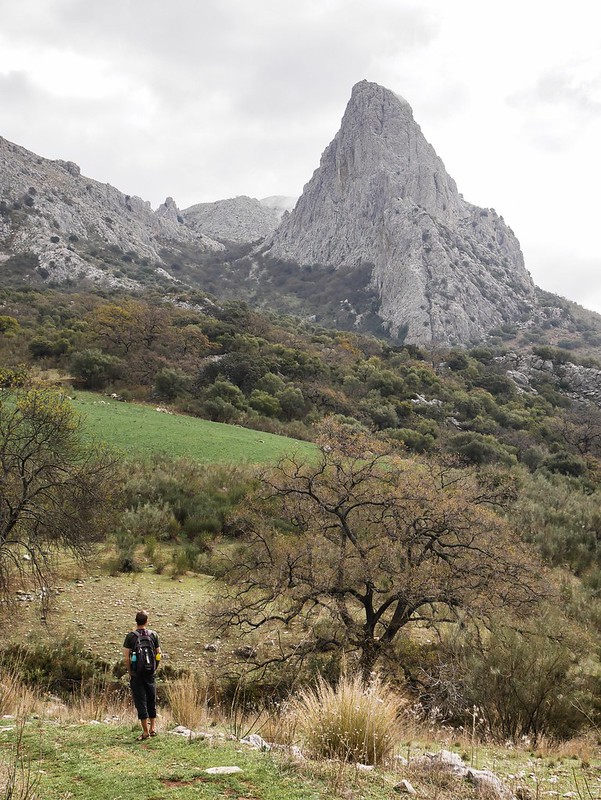 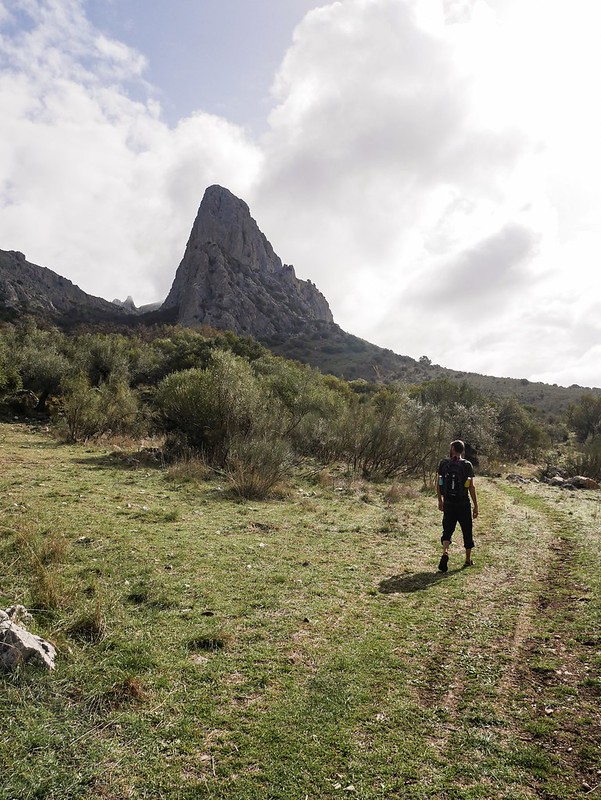 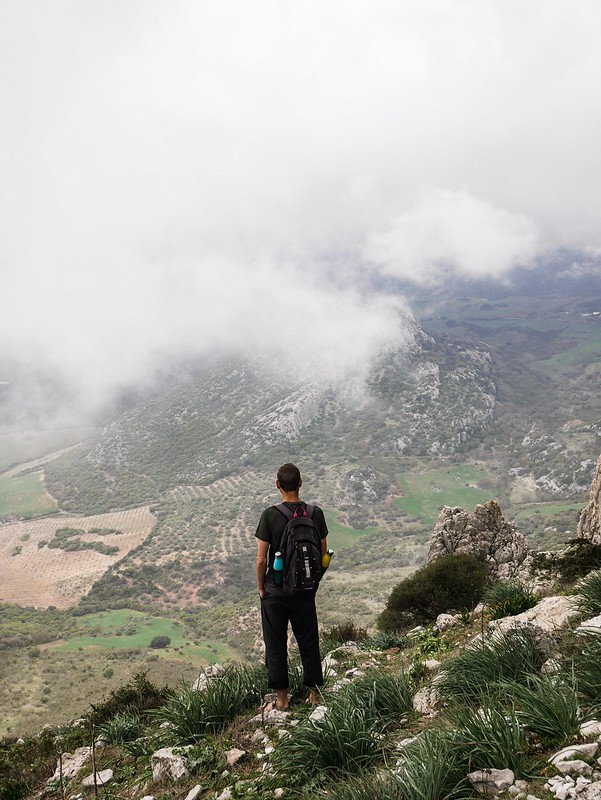 The next morning we had to do a few chores like getting water and replacing our gas tank. We’ve been trying to get gas for the past week but the shops have only sold a Spanish replica of our tank. After calling dozens of shops we found one that seemed to have them but it turned out to be a bloody bank holiday when we arrived. The good news was they definitely had the correct tanks – we checked by using our binoculars outside the shop which I thought was rather smart. We had to camp outside the village for the day so we could return the following morning and thankfully we succeeded and bought two to save going through that hassle again. 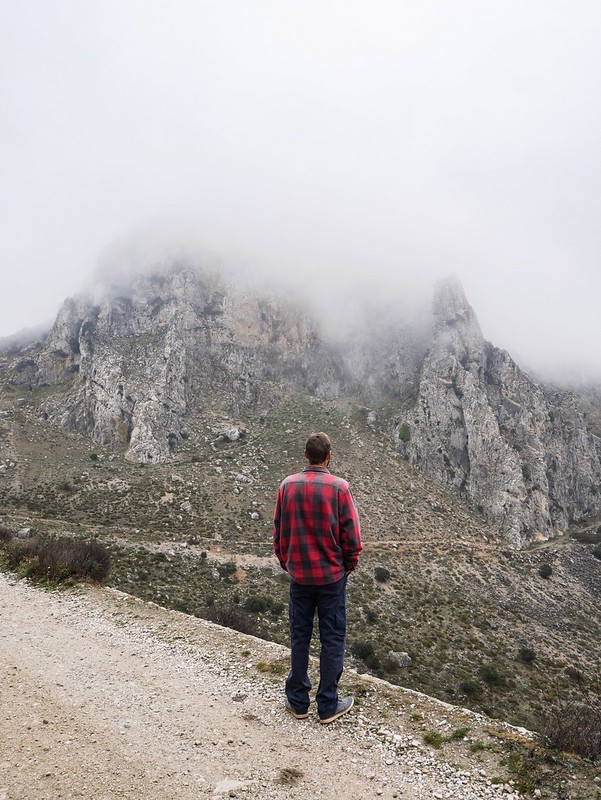 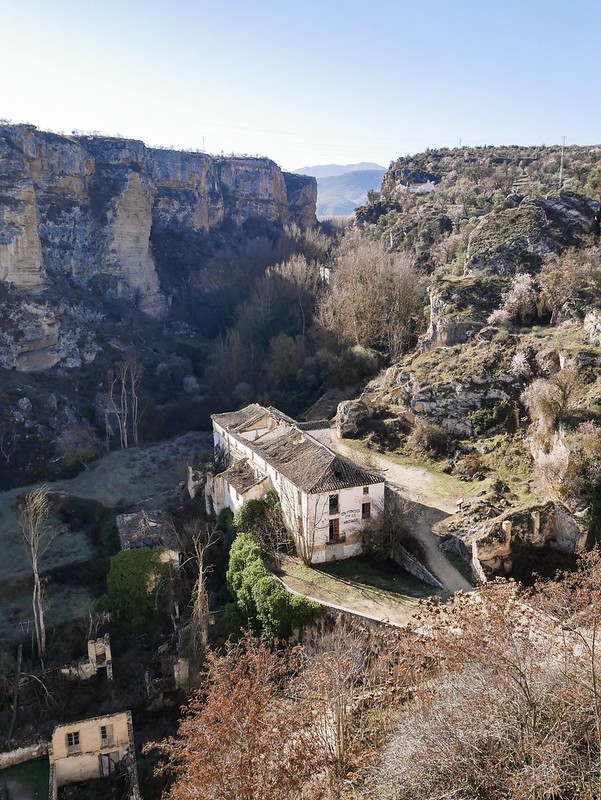 Not far from the village of Alhama de Granada was a hot spring we wanted to visit. There was a sort of spa hotel which was closed for the season but there’s two man-made pool beside the river which are free to use. I don’t know if the water filling the pools was fresh from the spring or run-off from the spas thermal pools but either way we dipped our toes in and were delighted to feel the warm water. We were the only people there so were very happy to submerge in the pools and relax to the sound of the river. The river was actually really grim though, it kind of had a haziness and slimy look to it which just made us wonder if sewage flowed into it. Luckily that wasn’t the water we were swimming in but we were mortified to see a couple of campers come down and fill up their Jerry cans with the murky water. We were soon joined by a Spanish couple who spoke English and chatted to us. Apparently the day before (which was the bank holiday) was absolutely heaving with people, playing music etc so it was a complete contrast today. We asked the couple about the cheap cartons of wine you can buy in Spain and asked if it was designed for cooking. They said yes, or to make sangria and we giggled because Craig’s quite content drinking it for 90cents per litre. Then the women said “I have to tell you one tip, it’s very important you remember this, if you go to a social event in Spain you must never take this carton of wine, only a glass bottle!!” Geez lady, how dumb or cheap do we look? They eventually headed off and soon after so did we, but just as we did a new chap arrived, a jolly German. He chatted to us about doing a big cycle route through France to get here and just as we were saying farewell I looked down at his speedos and noticed a ball poking out the side. I nearly threw up in my mouth and couldn’t wait to share my disgust with Craig once we got back to Helga. Craig had noticed it as soon as the guy arrived and we both felt scarred for life. 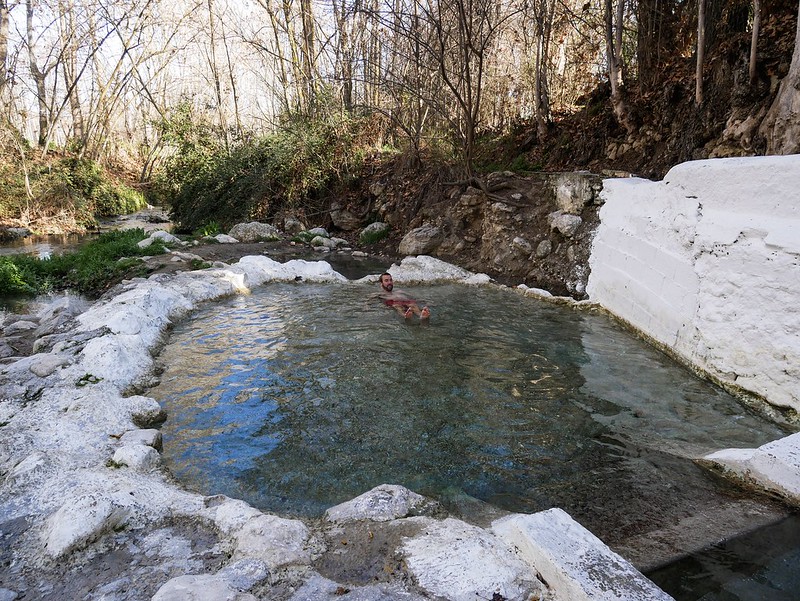 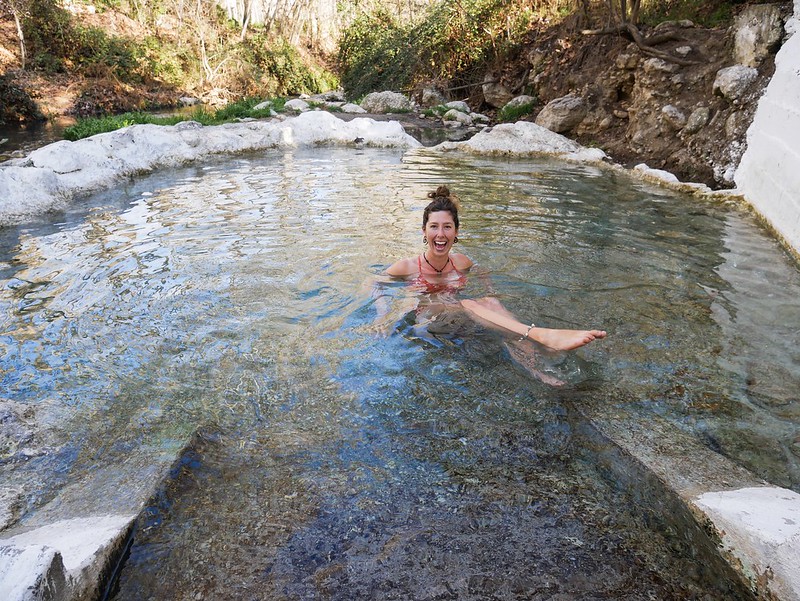 The reservoirs in Spain have a similar look to glacial lakes and really pop with colour thanks to the clay mixing with the water and enhancing the blue tones. So we were excited to head to another one and when we arrived the water was completely still and reflecting the mountains. We searched for a nice spot to camp by the lake and after some wonky positions we ended up settling on a dirt track with a fabulous view – minus the fact that a couple of motorhomes were parked further down the road and slightly ruined the natural feel. They were french hippies and came out the vans juggling which was fine but then they started playing music outside which I just can’t stand. 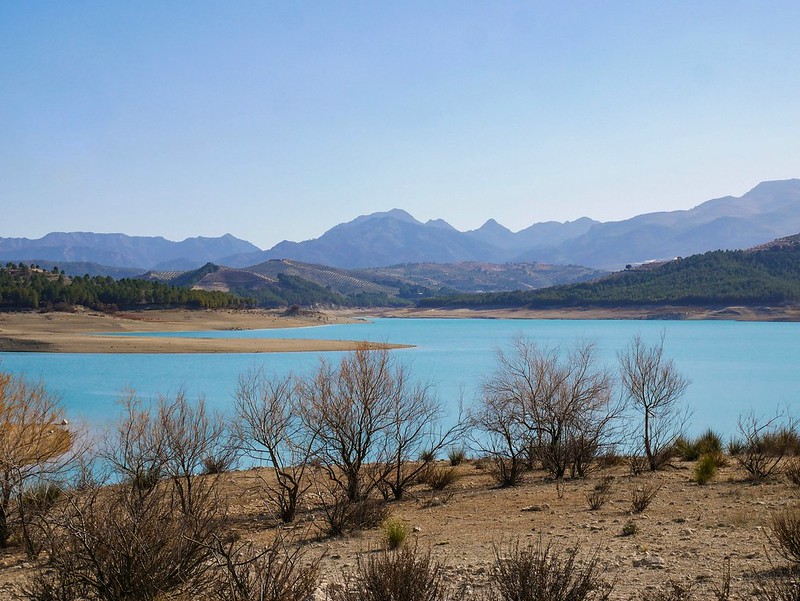 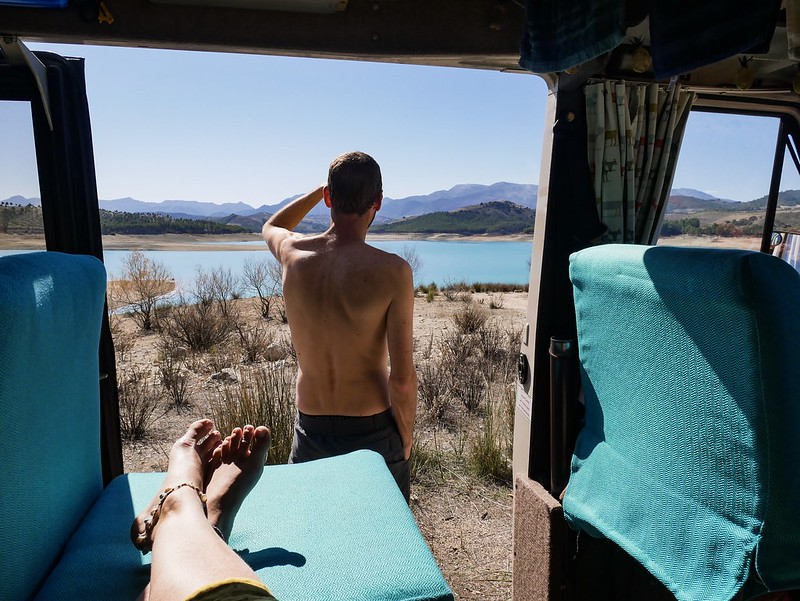 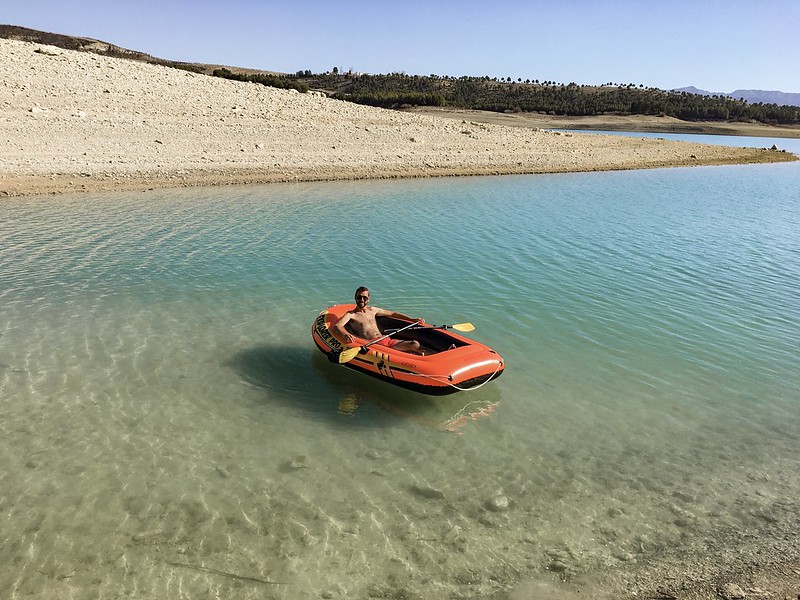 I find it so hard to relax and zone other noises out so to get away from the noisy neighbours we pumped our boat up and headed for the blue lake. It was a little breezy but such a nice feeling to escape the noise and be surrounded by nature. Best of all in the distance we noticed the camper vans were leaving, hooray. After a couple hours exploring the lake we headed back and basked in the sun with a clear view in front of us – pure paradise. It was about 20° so we even decided to have a refreshing dip in the lake. 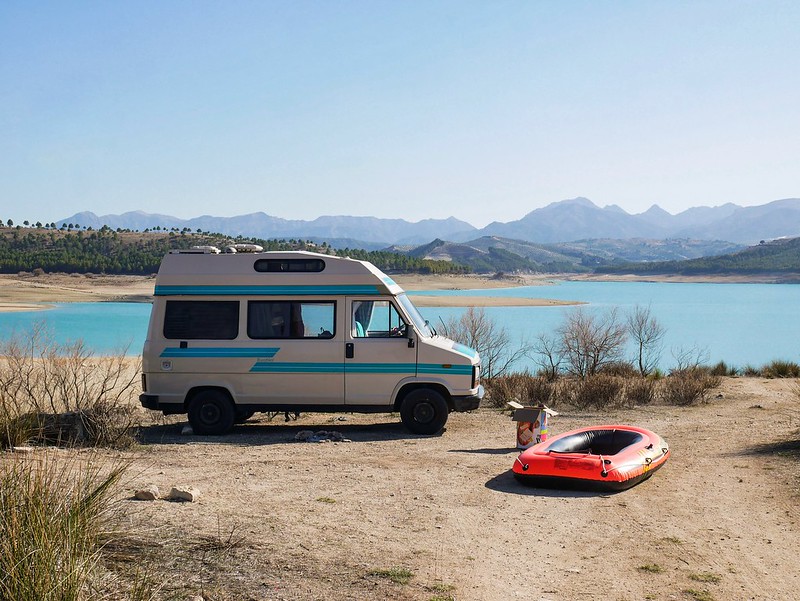 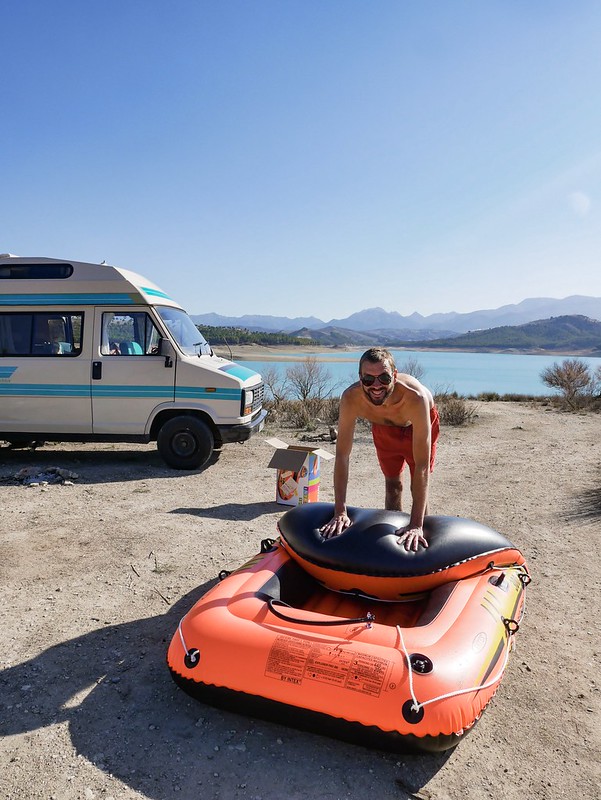 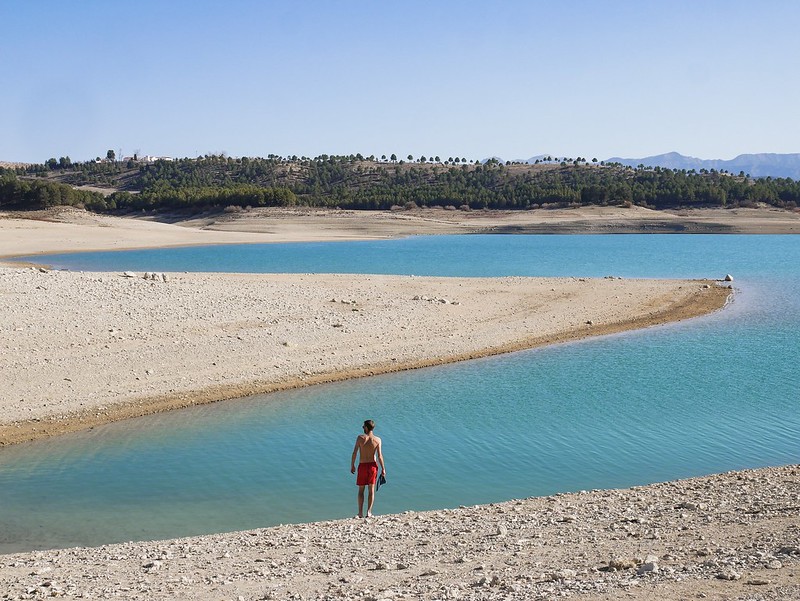 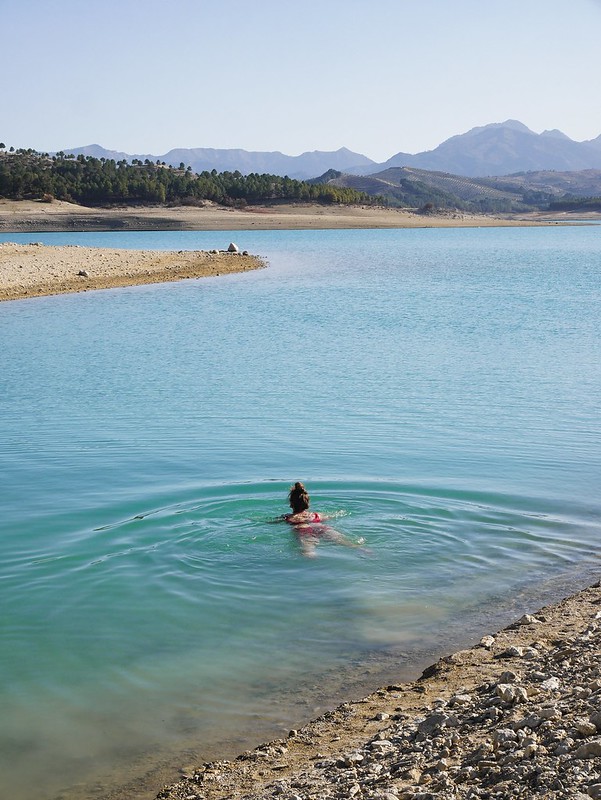 The next morning was surprisingly cold as we’re up at around 800m elevation. We set off for a stroll and it was just 2° but we knew it would warm up quickly so we donned socks and sandals for the start of the walk. We were heading through a gorge but it was a very adventurous route with lots of obstacles along the way. The first of which was a three meter wall to climb up and we had two choices, a rickety ladder that bent and rippled as you stepped on it or metal bars to climb up. I originally opted for the metal bars but I couldn’t make the lunge at the top so I panicked and descended. The ladder wasn’t much better but I eventually made it to the top. 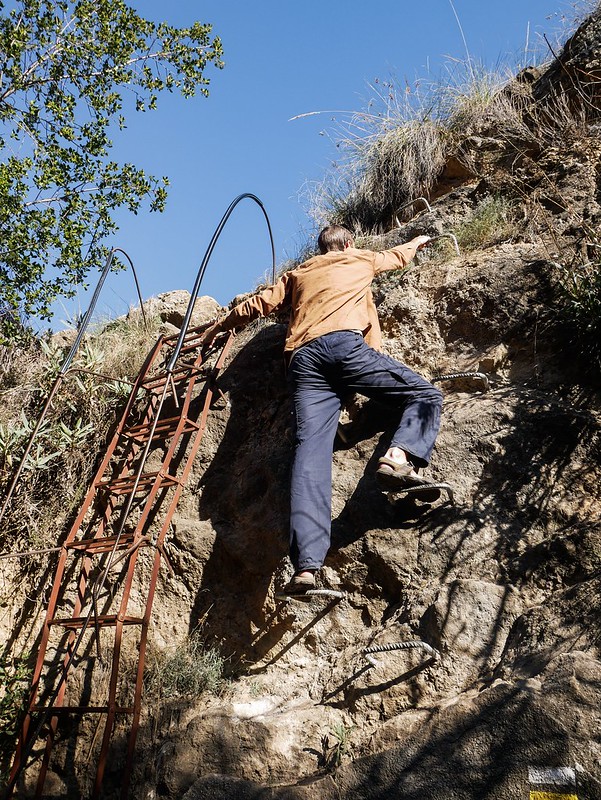 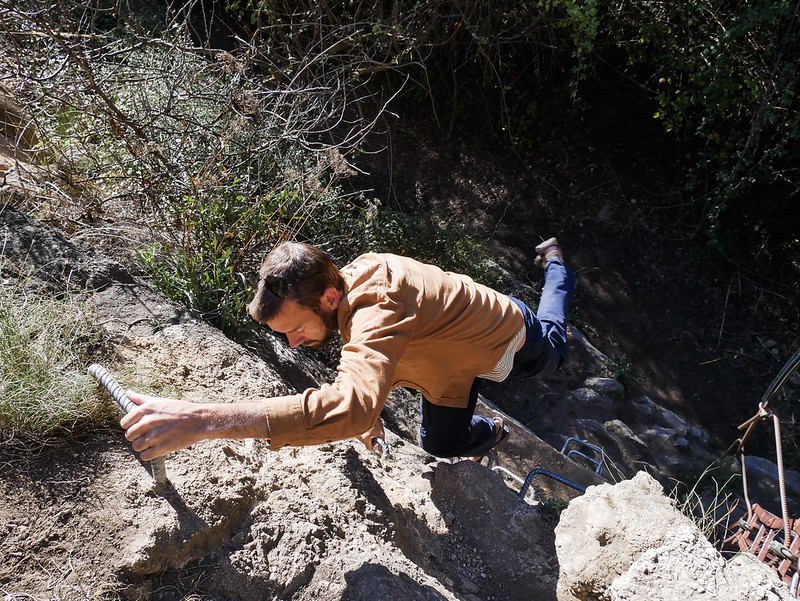 There were some steep sections with a thick rope to hold onto so you could basically abseil down and some fun bridges across the blue stream. It was a fun route but it was taking much longer than I expected. To be fair it was a 13km hike but for some reason I expected it to take a couple of hours and be back by lunch. The route back seemed to take forever as we walked past lots of agricultural land with olive groves and fruit trees covered in pink and white blossoms. We also spotted an abandoned house which we headed into. The ceiling didn’t look very safe so we just explored the downstairs where there were a couple of fireplaces and plenty of graffiti. 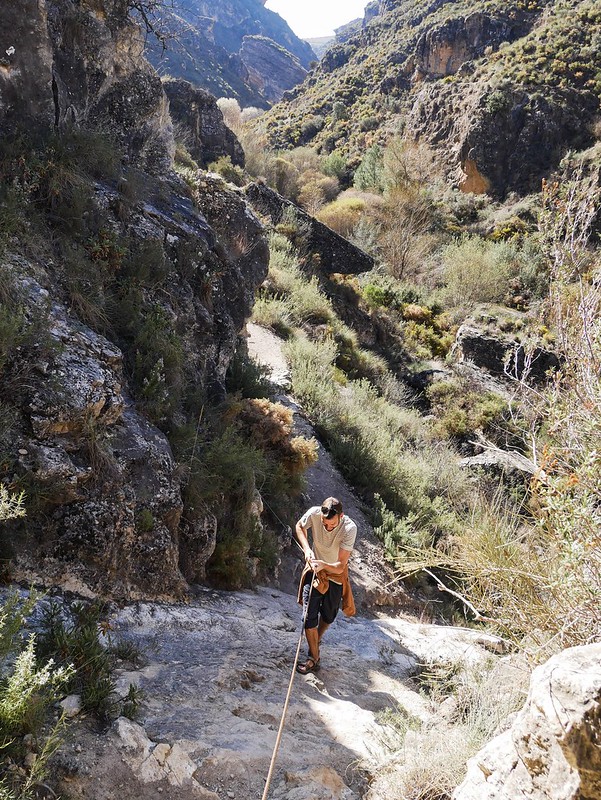 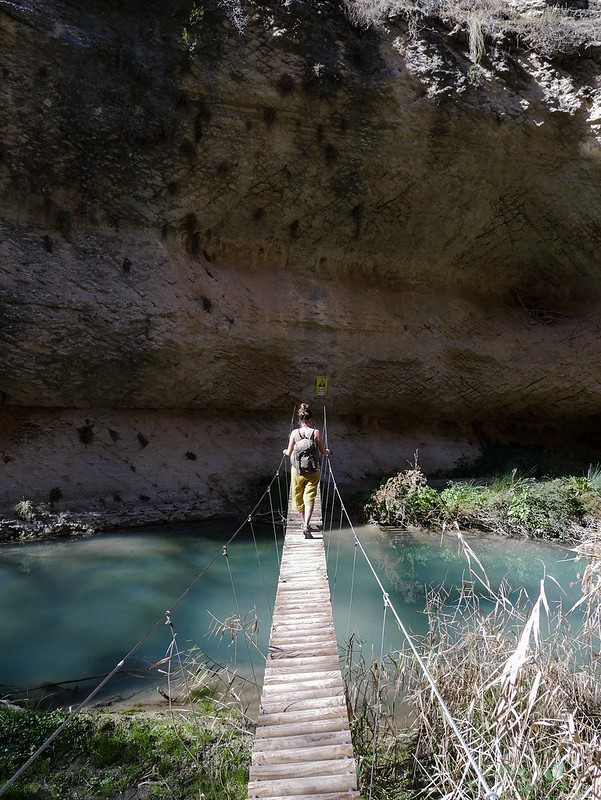 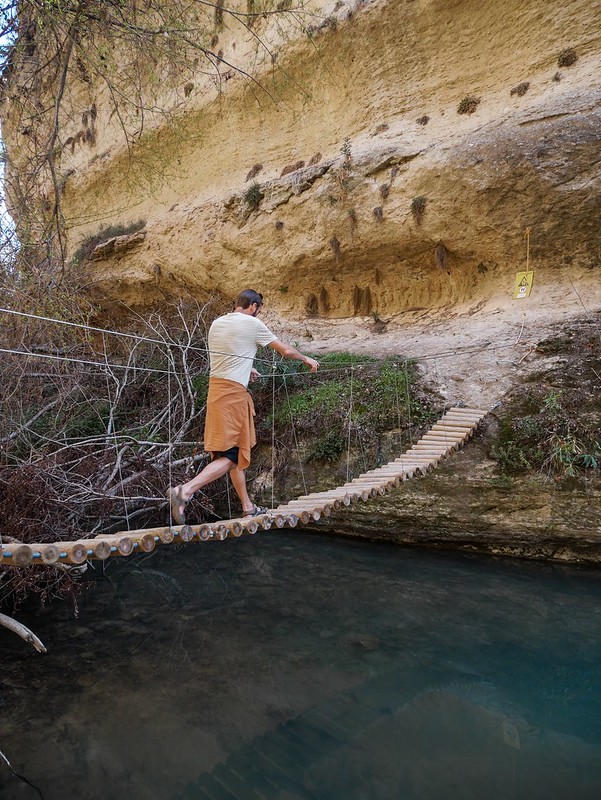 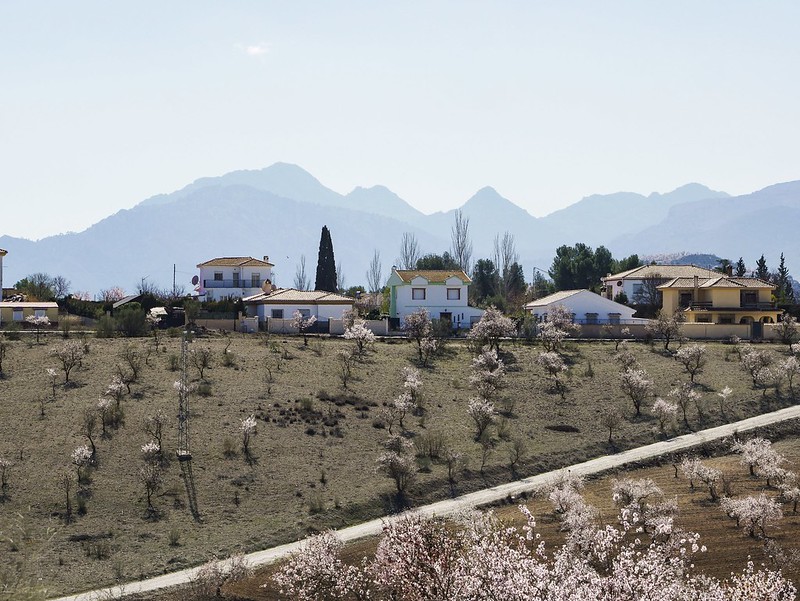 After four and a half hours we finally arrived back at Helga for a well needed lunch in the sunshine. We decided to stay put for the rest of the day and relax in one of our favourite camp spots. 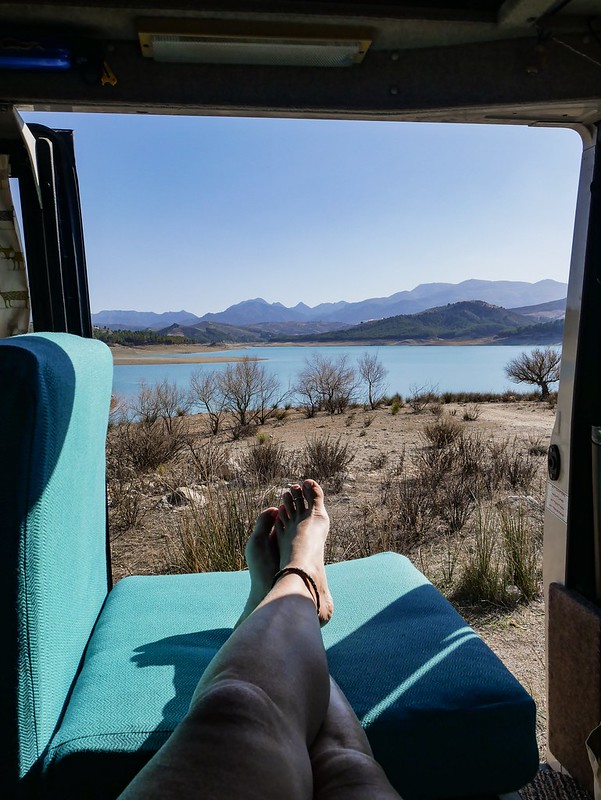