A lot of people don’t realise that southern Spain has some huge mountains and ski resorts. You can spend the morning sunbathing at the beach, drive an hour and then go snowboarding in the mountains. We would normally aim for these places to go hiking but the roads into the Sierra Nevada mountains all looked extremely steep and full of hairpin bends, plus the mountains were more round than pointy so we ended up skipping this area entirely. Instead we headed to the town of Guadix which is home to cave houses. Barrio de Cuevas is the main area where the cave houses are situated and it contains the highest concentration of cave dwellings in Europe with people living in them for hundreds of years. 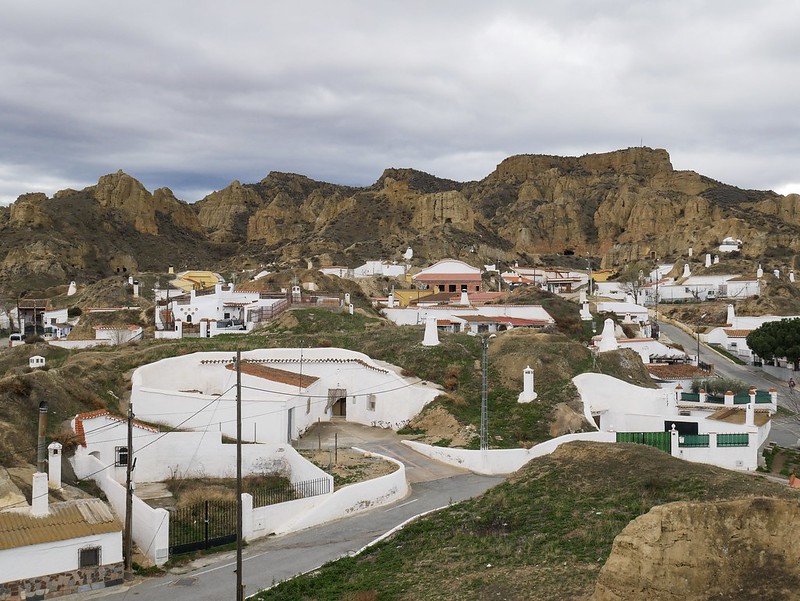 As we walked towards Barrio de Cuevas we noticed the verges were full of rubbish. It was really disappointing to see, some areas of Spain are really clean but others are like this and I just don’t get it because they provide bins everywhere. We headed to the first mirador and realised the cave dwellings were totally different to what we expected, they were more like houses built beneath the earth. It was quite bizarre because they had normal fronts to the houses with typical white walls and windows but then the house just vanished beneath a hilly mound. The only way you could tell a house was beneath the earth was because each one had numerous chimneys poking out the ground. 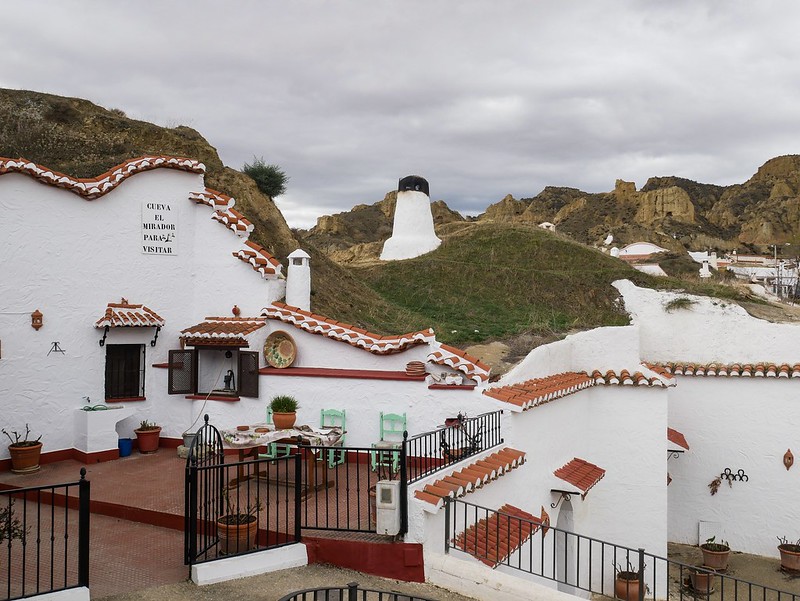 We headed to the next mirador and the neighbourhood changed from classy white fronts to very rustic cave homes. Each house was playing music which competed with the next one and there was more rubbish strewn along the streets. A dog suddenly darted for us and began aggressively barking. I was straight out of there! I absolutely adore dogs but if they’re aggressive I have a bit of a meltdown and I know they can sense my fear. Then we saw a bright orange dove fly into someone’s garden. We were confused so we took a closer look and saw the owner must’ve spray-painted them as some were half orange and half purple, I have no idea why. So yeah we didn’t get the best vibe from the area and quickly headed off, it actually felt more like a rough Latino neighbourhood than Spain but I’ve heard lots of good reviews about the area so maybe we were just unlucky.

So we set off north into an area known for its desert landscapes and badland scenery. It was a wonderful drive through the countryside and we made sure to stop at a place where I’d read about some hot spring. The pullout we stopped in was riddled with rubbish, the sort of scene we came across in Egypt and Vietnam and something I didn’t expect in Spain. We followed a track down to the river and began climbing over rocks and wading through water to reach the main pool which was more like swimming pool temperature than a hot spring. We had a particularly cold day with just a maximum of 8° so I think it would be more pleasant on a warmer day but it was still a fun place to go for a swim. The edges were all thick with mud, whether it was therapeutic mud or not we didn’t have a clue so we refrained from smearing it over our bodies. Annoyingly just stepping on it made all the water turn murky so it wasn’t the most idyllic pool. After our dip we drove a little further up the road where we found a perfect place to camp with a fabulous view of the badlands and a dark storm looming in the sky. 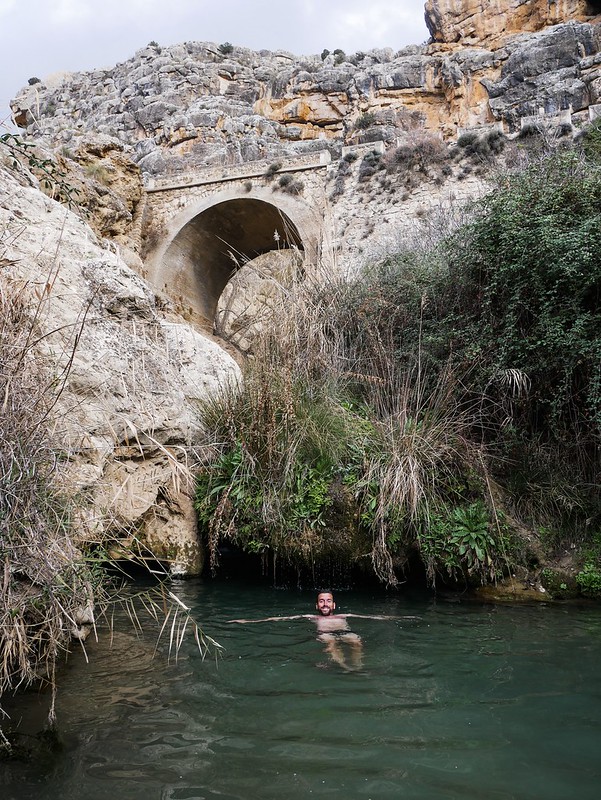 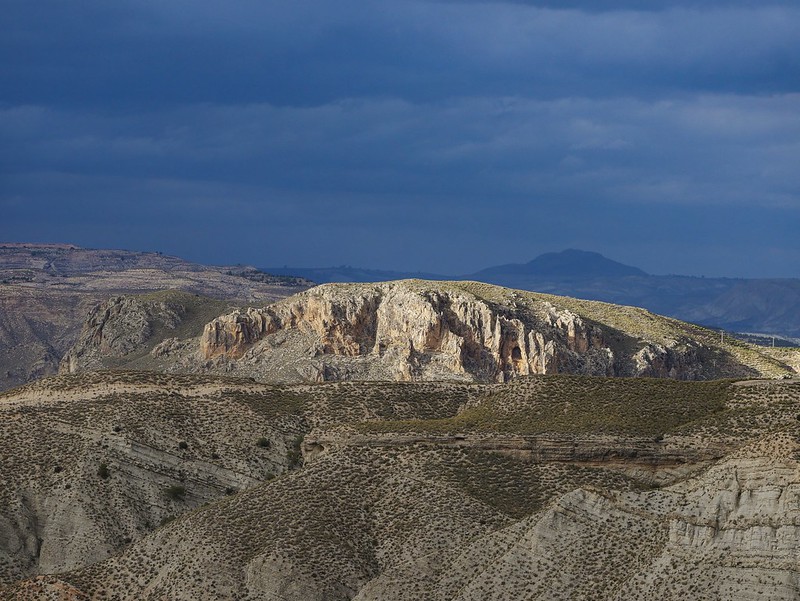 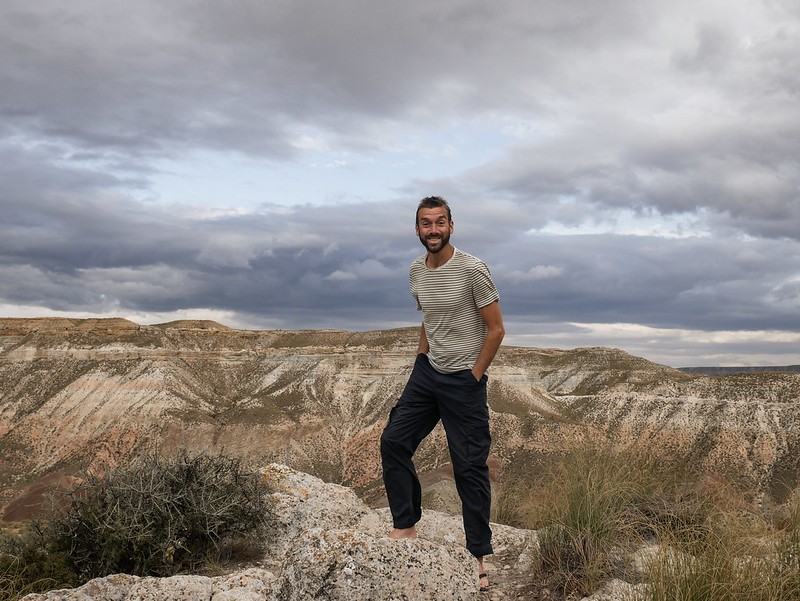 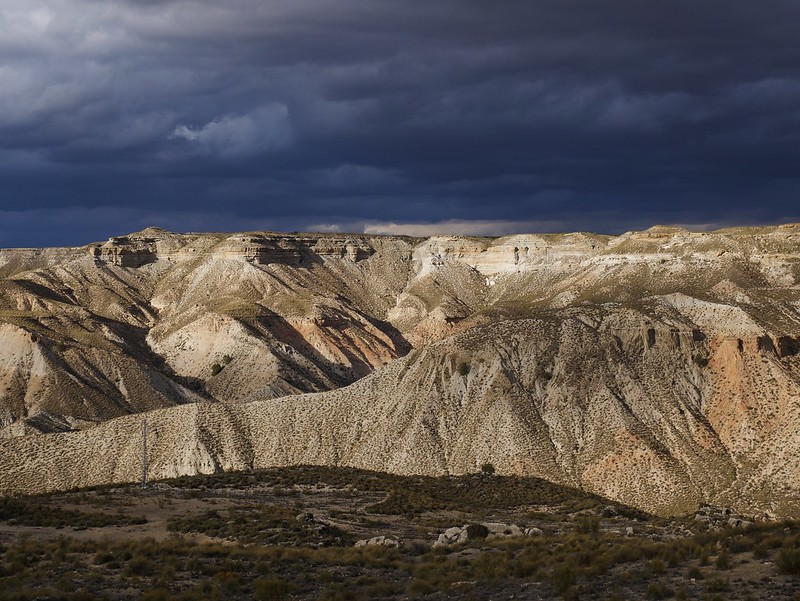 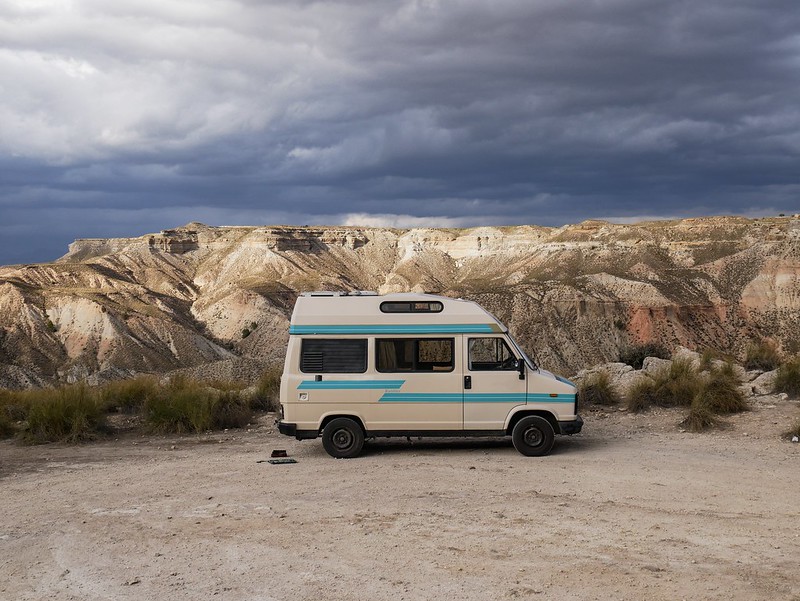 The next day we drove to Gorafe which is home to more cave dwellings. We got a much better vibe from this village and headed up a dirt track so we could reach the top of a plateau. The views were quite bleak in the grey weather but we did find a huge pile of tumbleweeds along the track which we attempted to throw and get rolling in the wind. 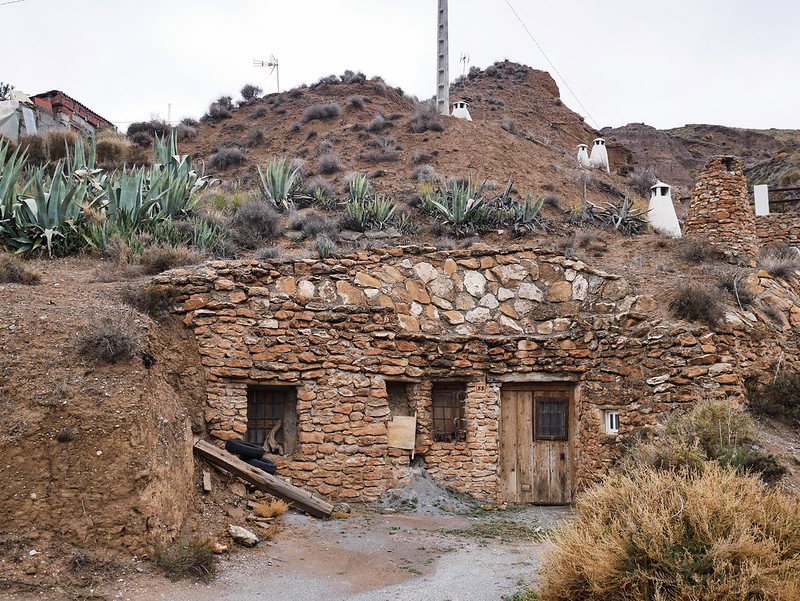 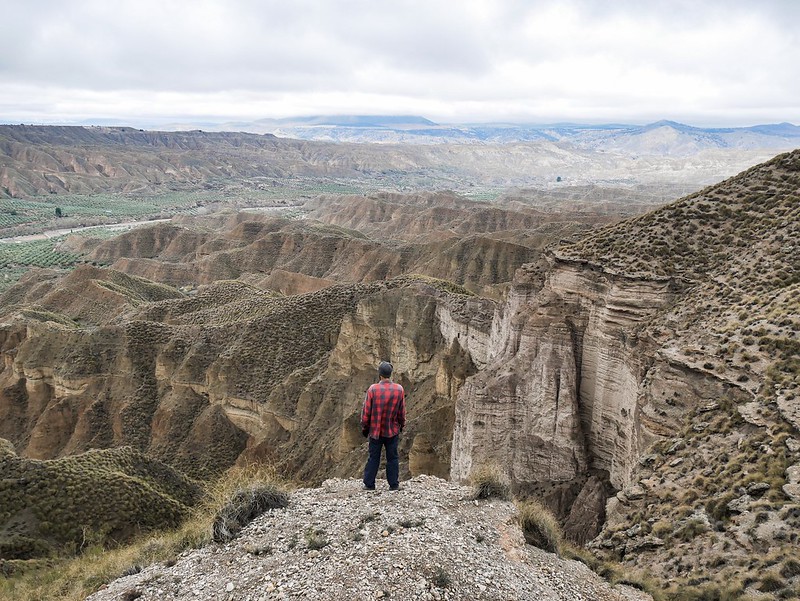 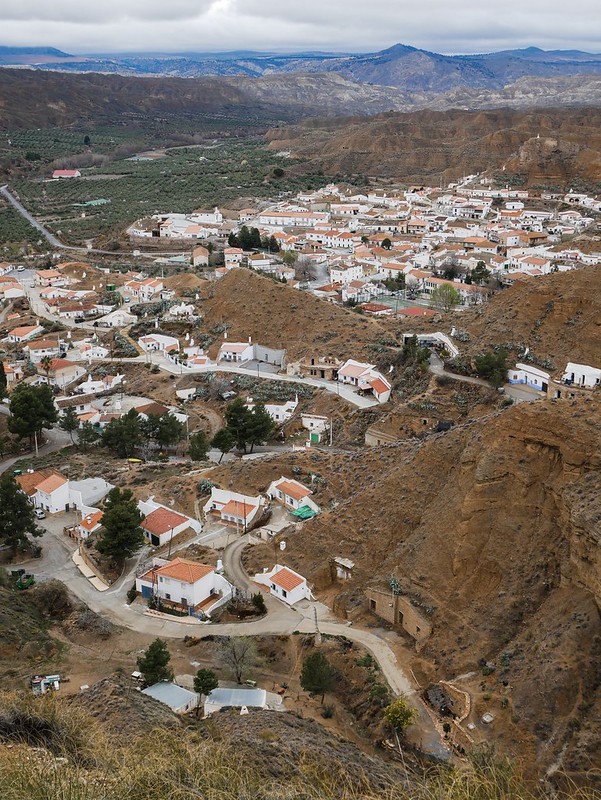 The main desert area in Spain is Tabernas, in fact its technically the only desert in Europe so in the afternoon we headed there. The desert is surrounded by three mountain ranges which block any moisture from the Mediterranean Sea and thus keep the area dry and barren. It’s been used as a wild west film set for countless Hollywood blockbusters since the 60s and some of the sets are still in the desert. Sadly they’re now converted into paid theme parks which we won’t be visiting. Instead we did a 10km hike to take in the main sights of the desert which included some interested rock formations, a mini canyon and palm trees. 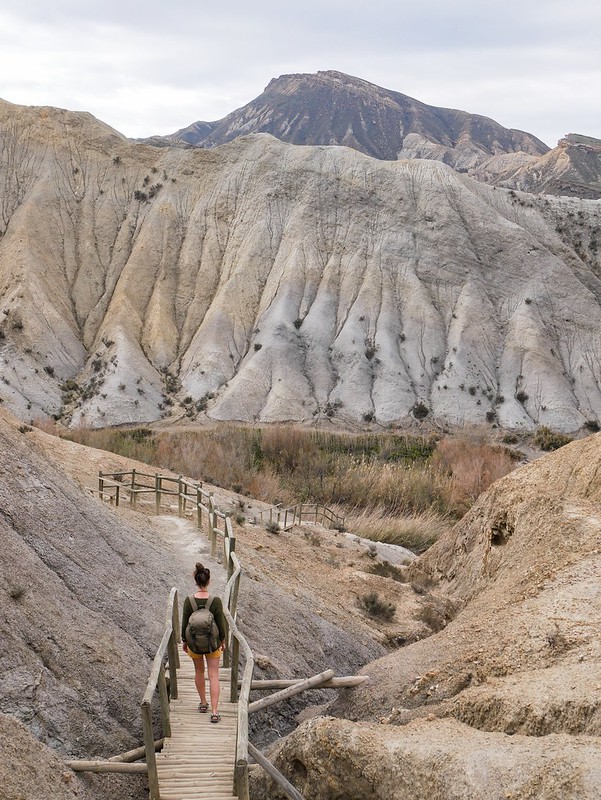 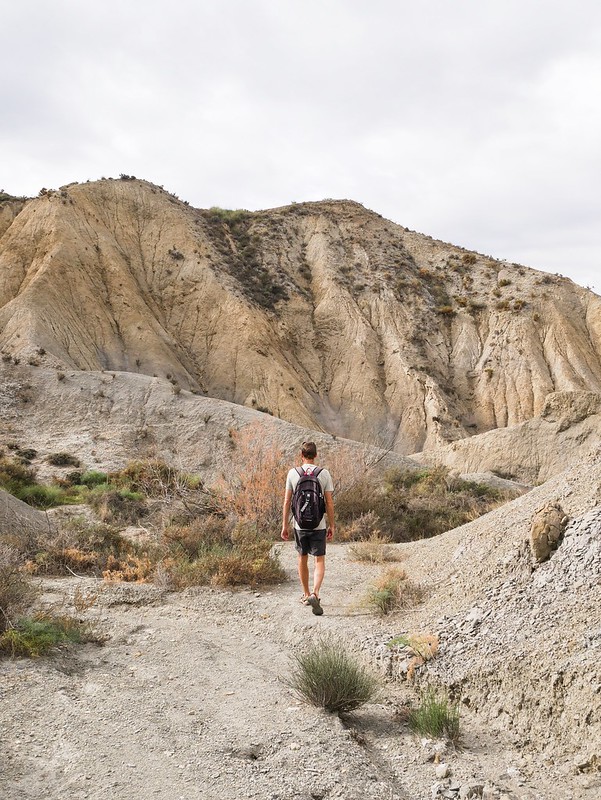 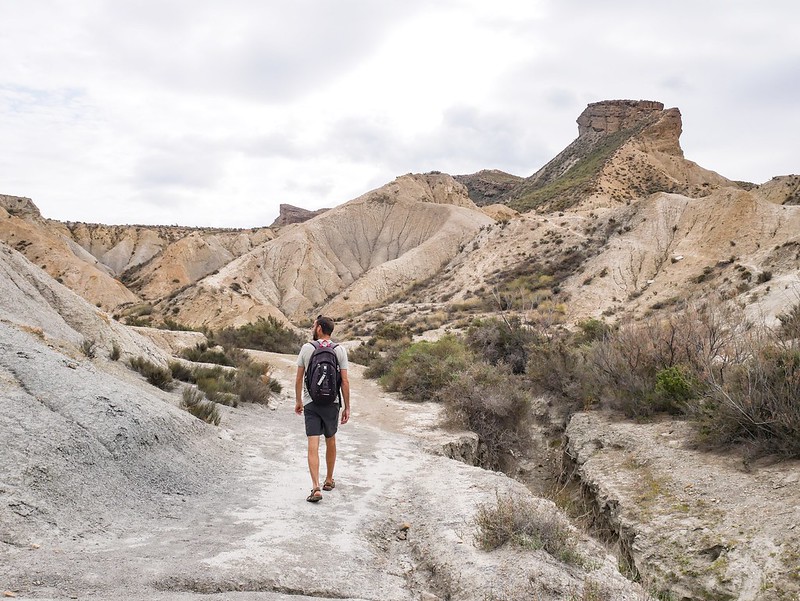 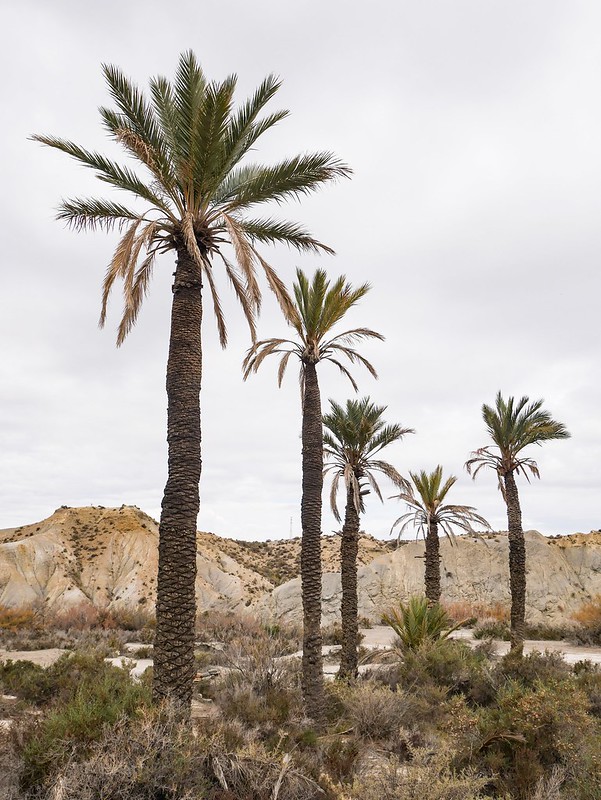 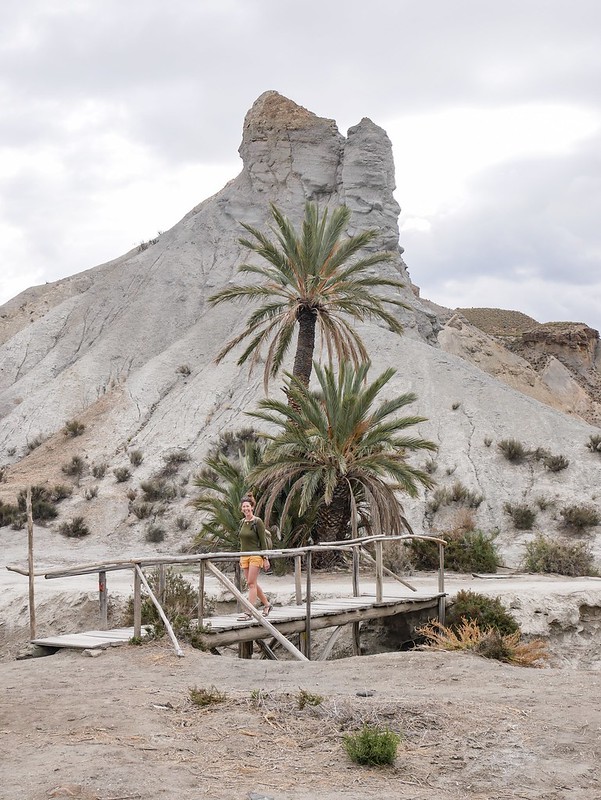 We also walked near the Western Leone film set and actually managed to get a great view of the old, flat fronted, wooden buildings built above the gorge. It was originally built for the ‘Once Upon a Time in the West’ movie and since then it’s been used to film other spaghetti westerns. We were being chased by black clouds all day but thankfully the rain held off until we made it back to Helga. Now it’s time to make our way to the Mediterranean! 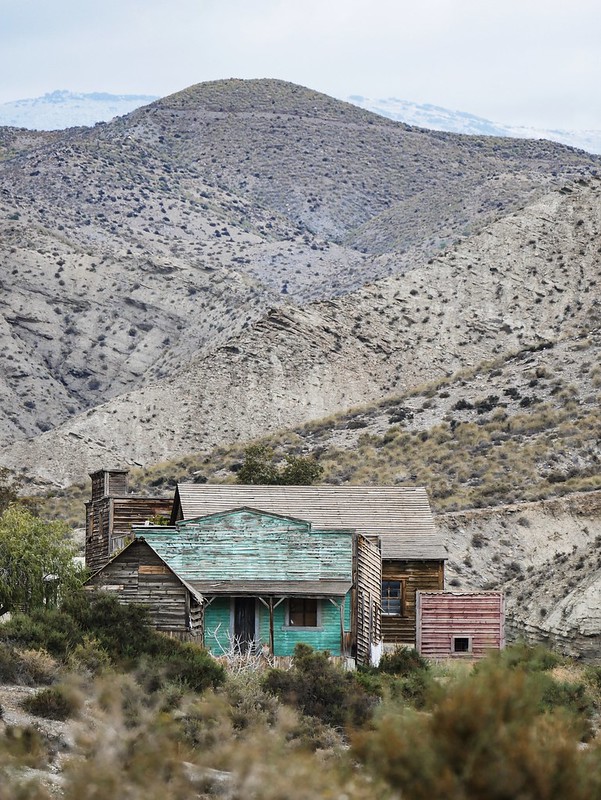 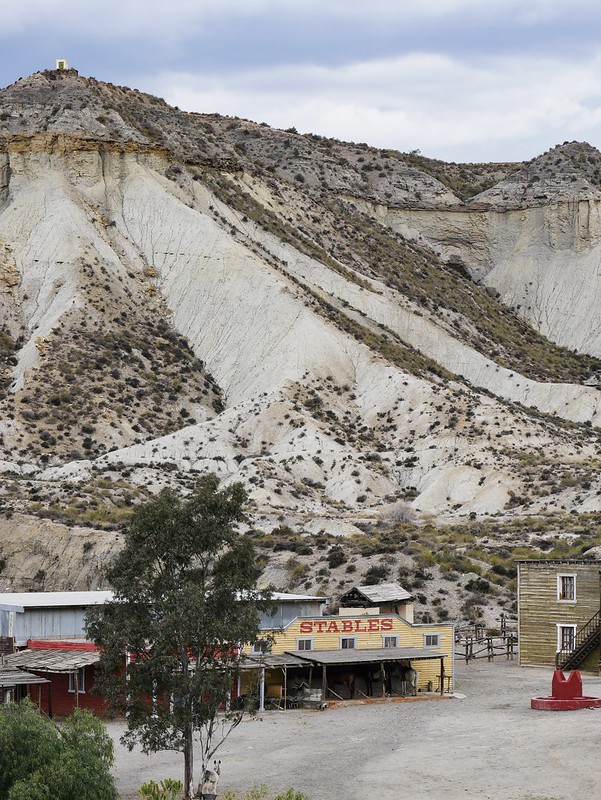 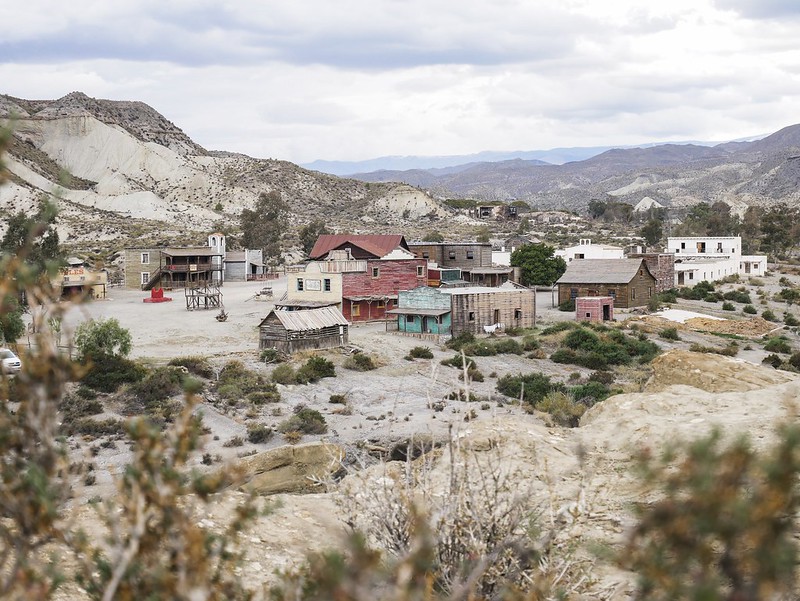 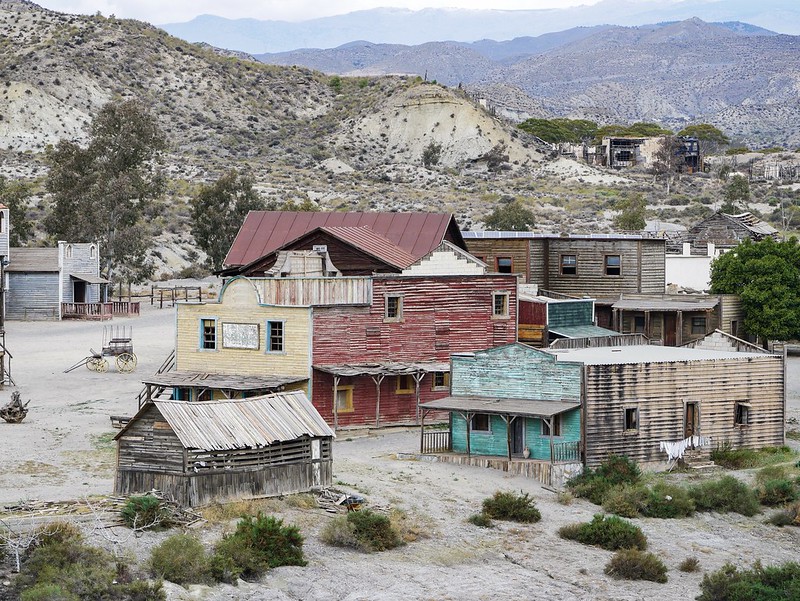 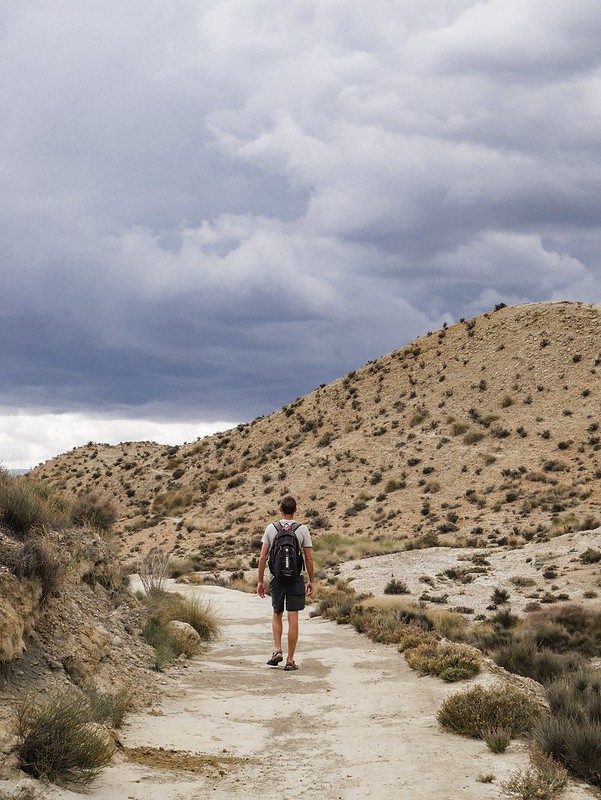