I’ve always pictured vultures to be the ones flying circles around me in a dry desert landscape when I’m severely dehydrated and on my last legs. Vultures just look like the bad guy, I can imagine gang members being reincarnated into them but my opinions soon changed when we visited Monfragüe National Park, home to 300 pairs of black vultures which is the largest concentration in Europe. While eagles kill living things vultures solely eat carcasses, with the rare exception that they eat an ill or injured animal. I also learnt that they live for about 30 years and stay with the same partner for life. They have a whopping wingspan of almost 2.8m which is over 8ft and they stand 1m tall. 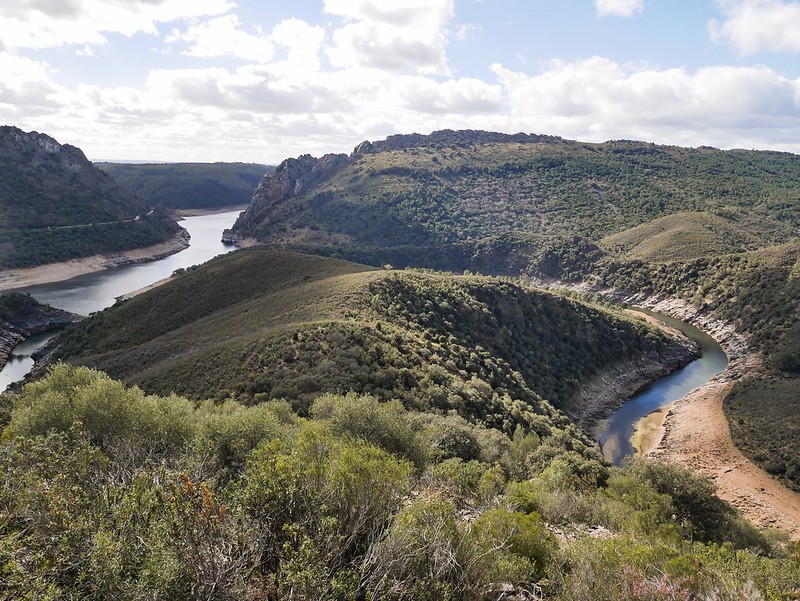 We started our exploration in the park by doing a hike to Cerro Gimio which offered a fantastic view of the lush, forested hills and a river flowing through the valley. We saw a group of deer not far from the track and a few vultures but we wanted to get a closer look at the parks headline act so we headed to Mirador Salto del Gitano. A jagged, rocky mound rose high above the milky brown river and it’s on this rocky wall that the vultures nest. As soon as we arrived we spotted dozens gliding through the sky. They flew so effortlessly like a paraglider drifting in the thermals and occasionally one would fly close to us and we’d hear the loud swoosh of their wings. After flying a few circles they’d head back to their nest, sometimes the wrong one as the female would squark and he’d fly off, or maybe it was the right one and his missus was saying “why have you come back empty handed…go and find me some food!” It didn’t seem like any of them found food but occasionally they’d have a branch or twig to add to the nest. Apparently vultures have an amazing sense of smell and are able to sniff out a carcass from a mile away. 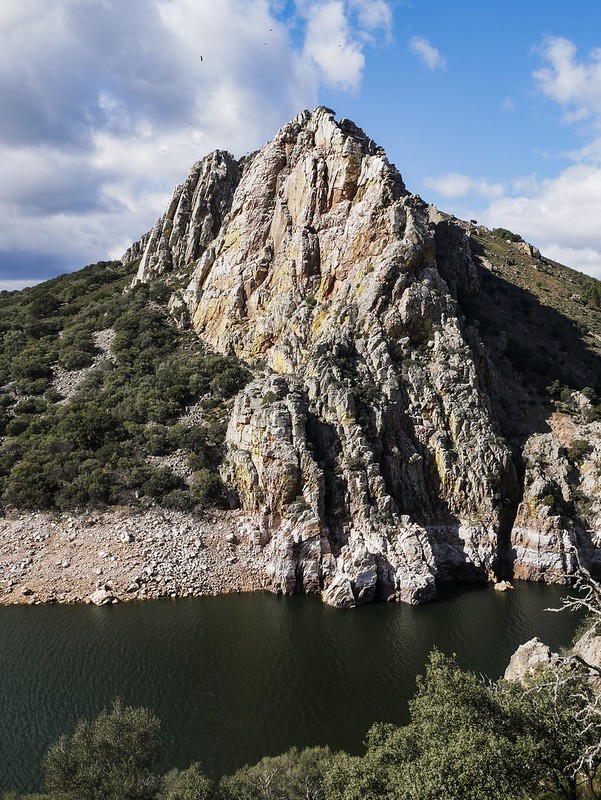 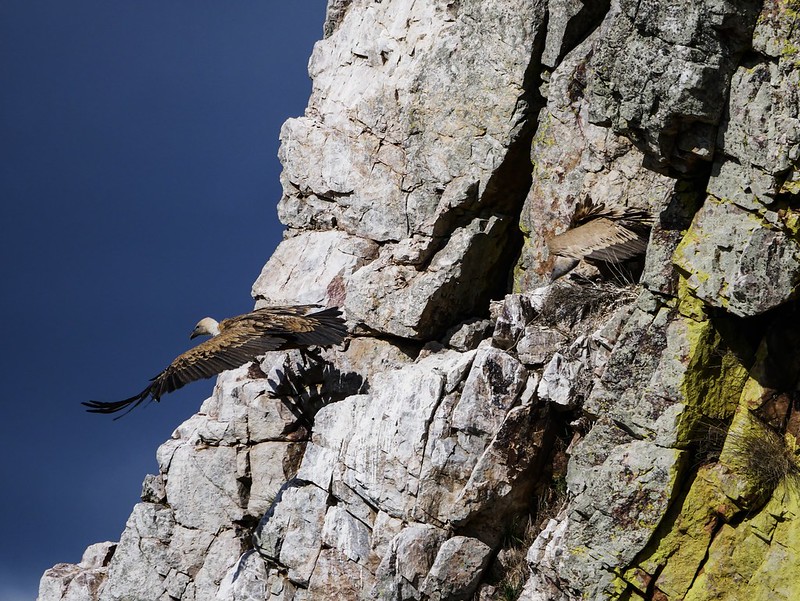 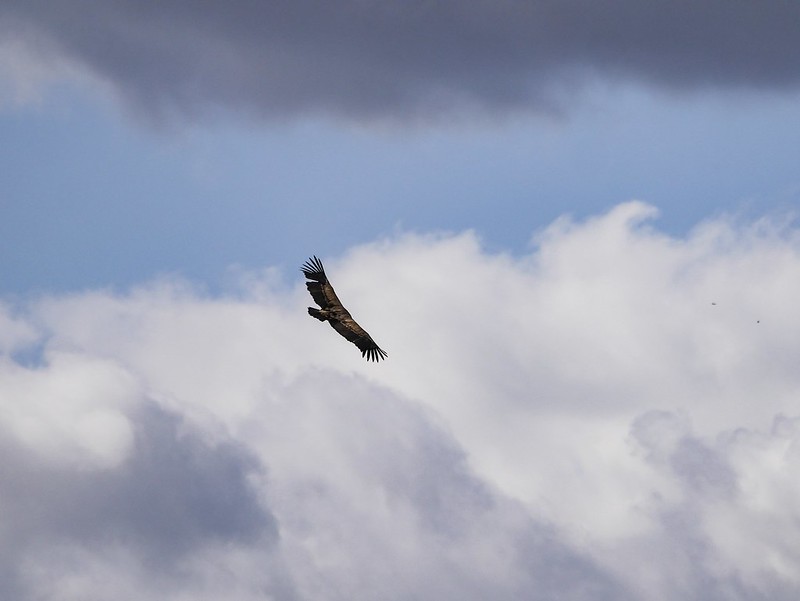 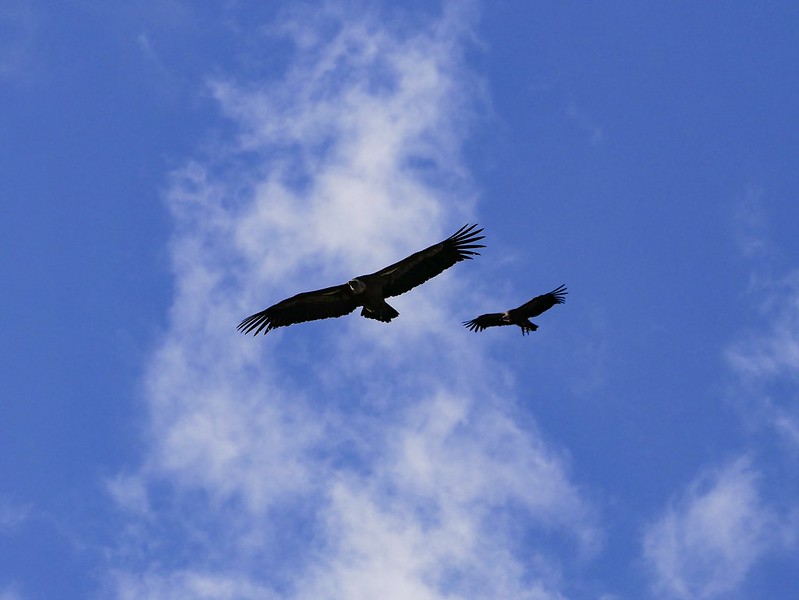 We decided to do another hike, this time up a steep track to a castle that sat atop a hill and offered a view of the river below us. It ended up being quite a long walk and the route back went parallel to the river but through the forest so we didn’t really get any views. When we got back to Helga there were even more vultures flying around and we were kind of gutted that we wasted our energy on a rather shit hike as this was far more interesting. At one point there were about 30 vultures flying above us in a big group, it was mesmerising to watch. 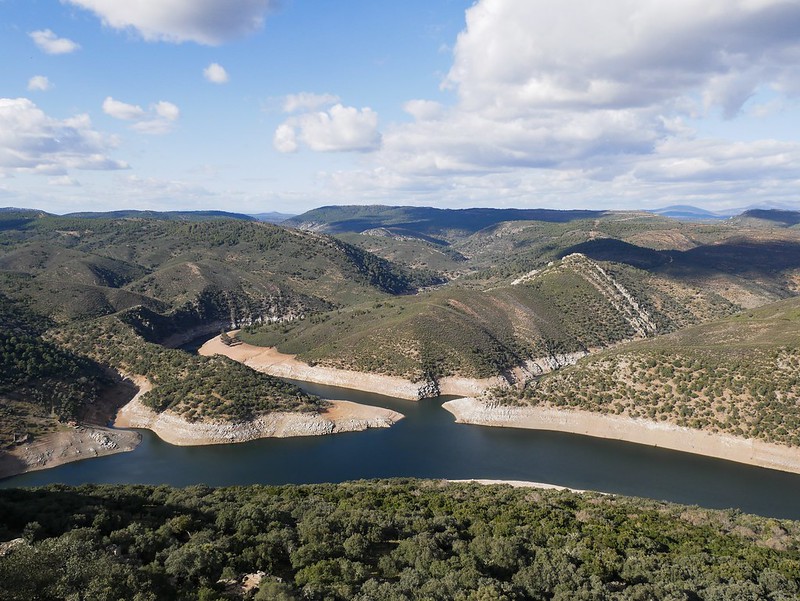 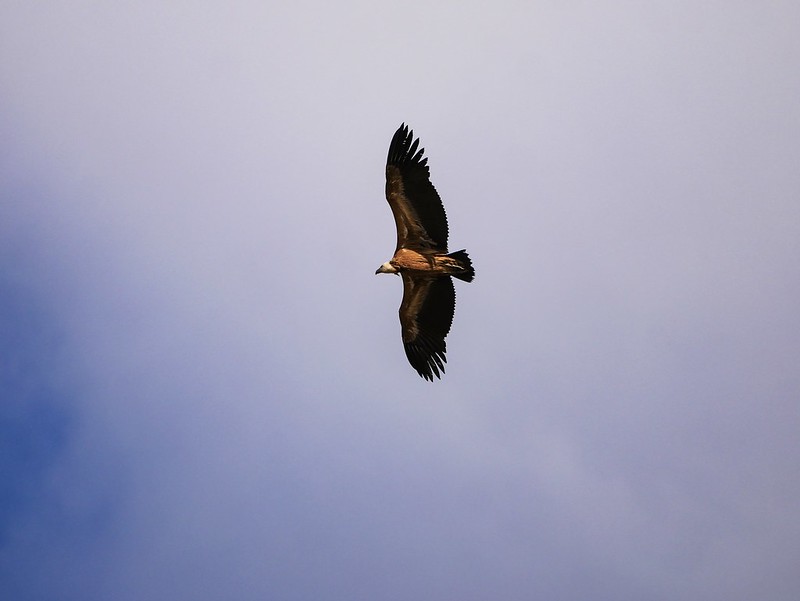 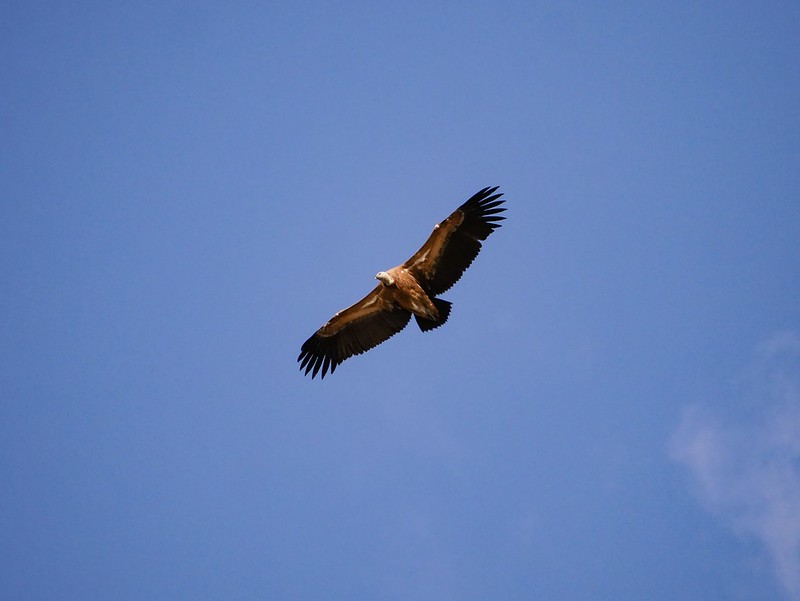 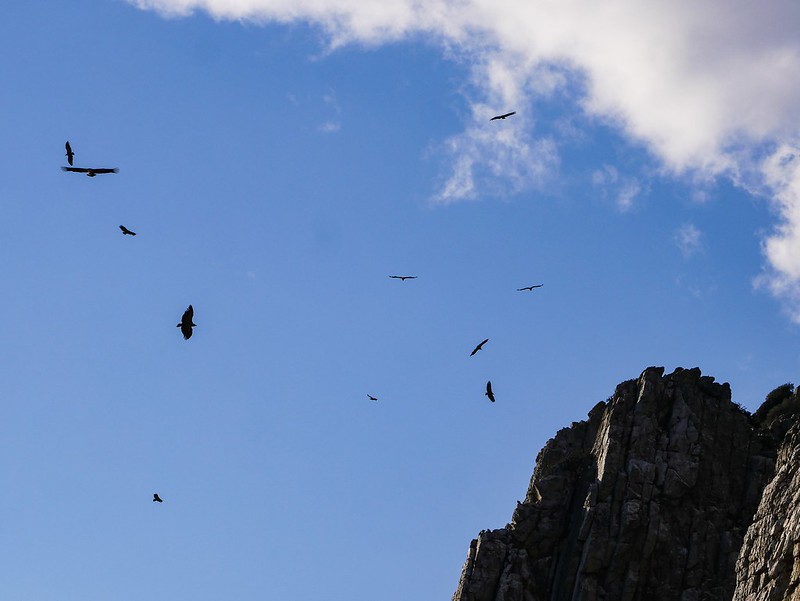 We eventually headed off and exited the park so we could find a place to camp. We ended up in a picnic area surrounded by cork trees and we were joined by two huge shepherd dogs. They were giants, bigger than wolves! One looked like a juvenile and got excited every time we spoke to him, wagging his tail like crazy. The other may of been his mum, or at least used for breeding as she had a very saggy belly with bulbous nipples from multiple births. The mum looked less friendly, and for once we didn’t get out the car to say hello to them. I felt bad because I know they were most likely gentle giants but if they wanted to they could bite my face off in a split second. It was a cold night and we felt even more sorry for them being outside but I guess they have a lot of fur and are used to it. But we were so confused why they stayed outside our van all night, if they were shepherd dogs why weren’t they with their flock? I really hope they weren’t abandoned. 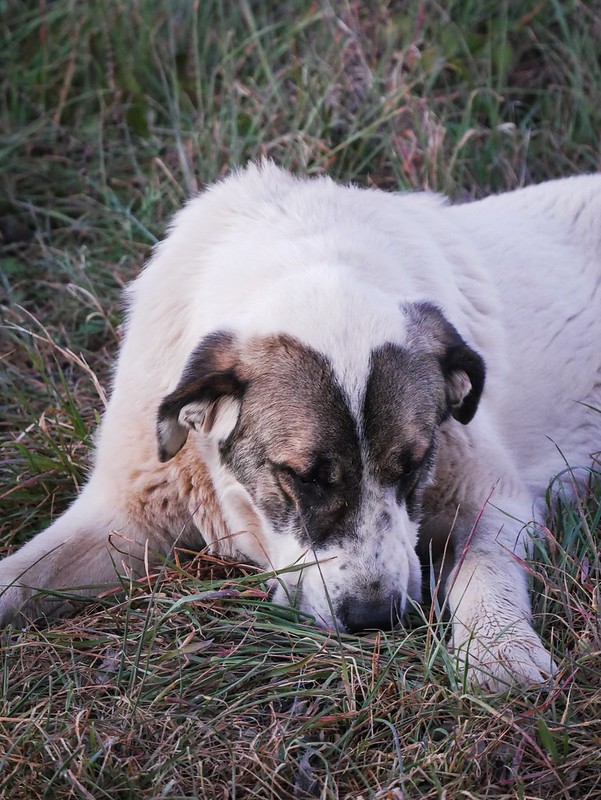 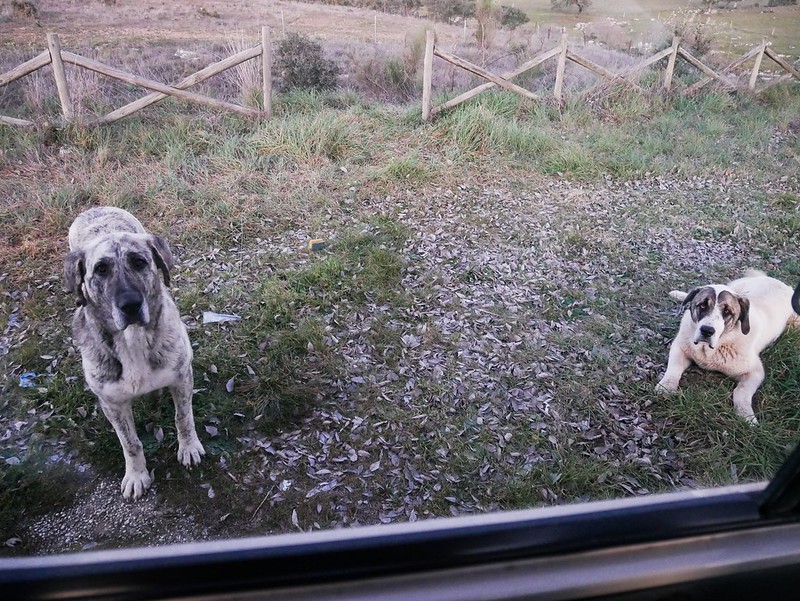 The next morning we did a short drive to the town of Trujillo for a little stroll. It was a pretty place with old stone buildings stained a nicotine beige colour which made the whole place look like a sepia photo. The centrepiece was the main plaza which had a beautiful collection of buildings, arches and a grand church. We followed the narrow lanes up to a castle which was built on the site of an Arab fortress. From the top we got a great view across the town and the many storks nesting on the towers. 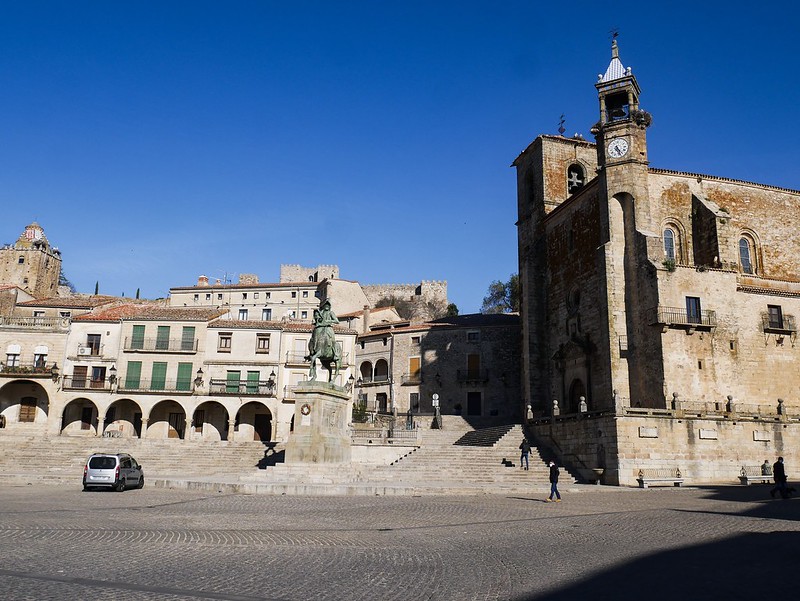 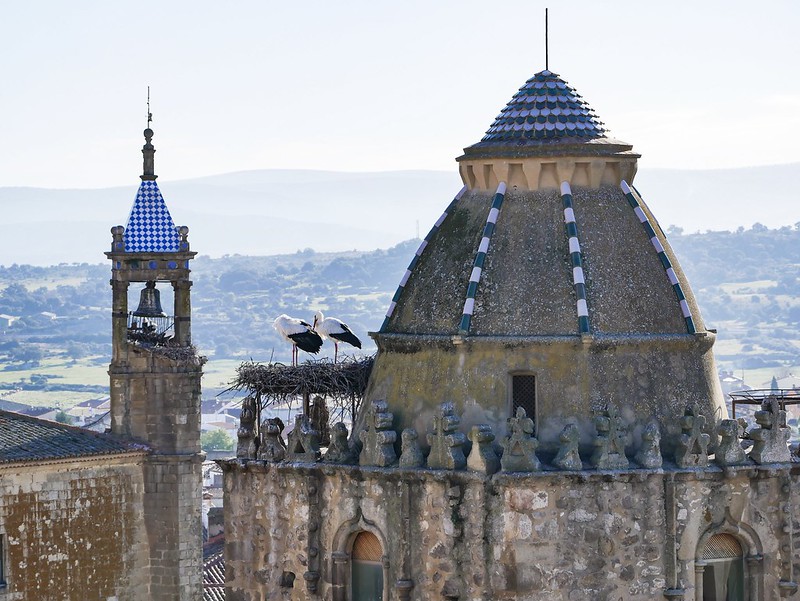 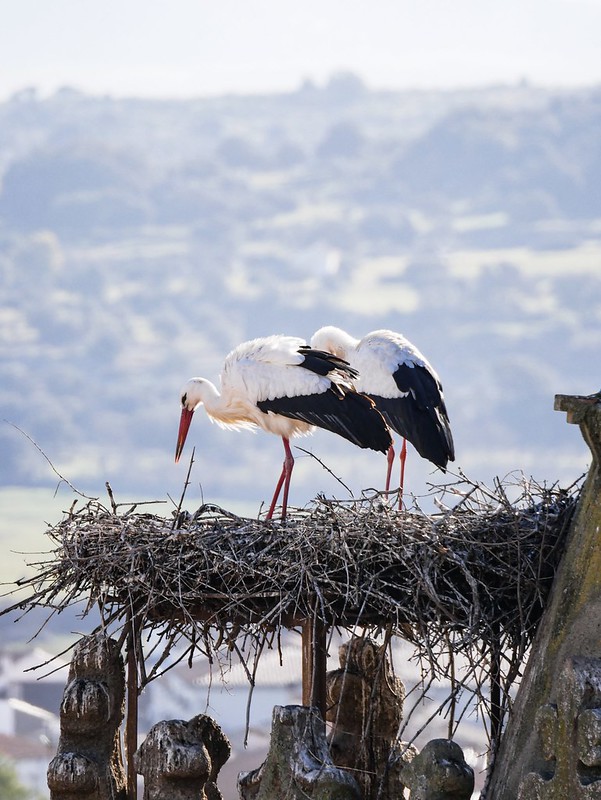 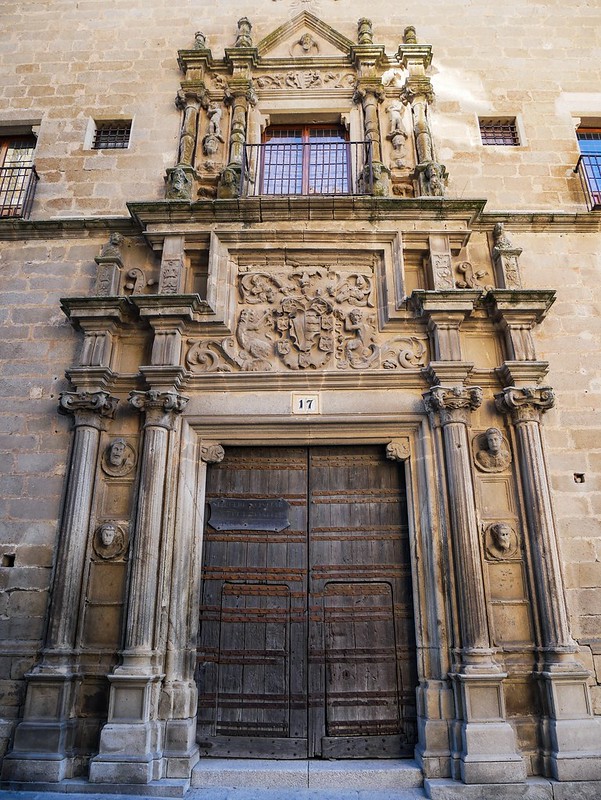 Further south was another town we stopped at called Zafra known as ‘little Seville’. We visited Seville a few years back and as far as cities go it was very pleasant so we were expecting Zafra to have the same character. We didn’t exactly arrive at the best time, it was 3pm when we strolled through the main shopping road in the old town and it felt like an apocalypse had happened. There wasn’t a soul around. Shops were all shut up and signs on the doors showed their bizarre opening hours. Honestly I would hate working in Spain, it would feel like you’re working all the time. Imagine starting work at 9 and then going home from 2-4 for a nap and coming back to work 4-7. No thank you. My Spanish friend said it’s normal to go to bed after midnight, even the main tv shows that would be on tv in England at 7pm are shown at 10pm here. 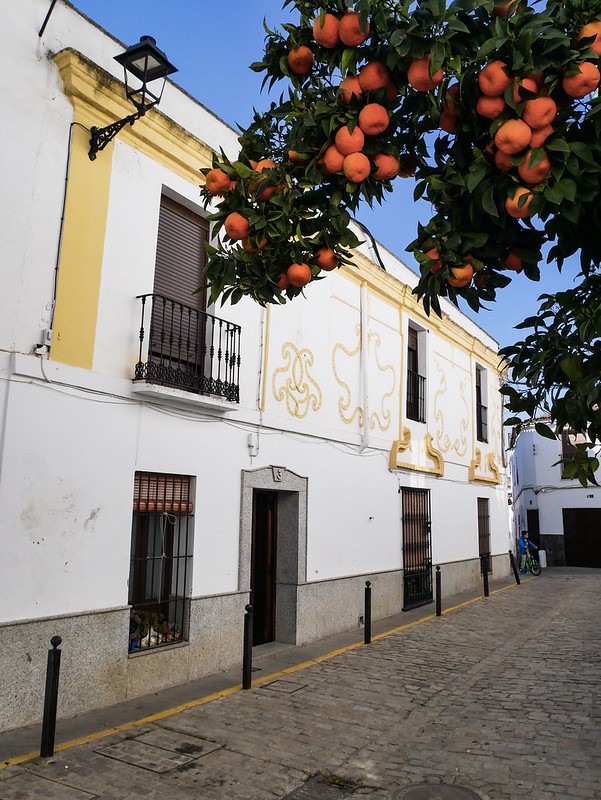 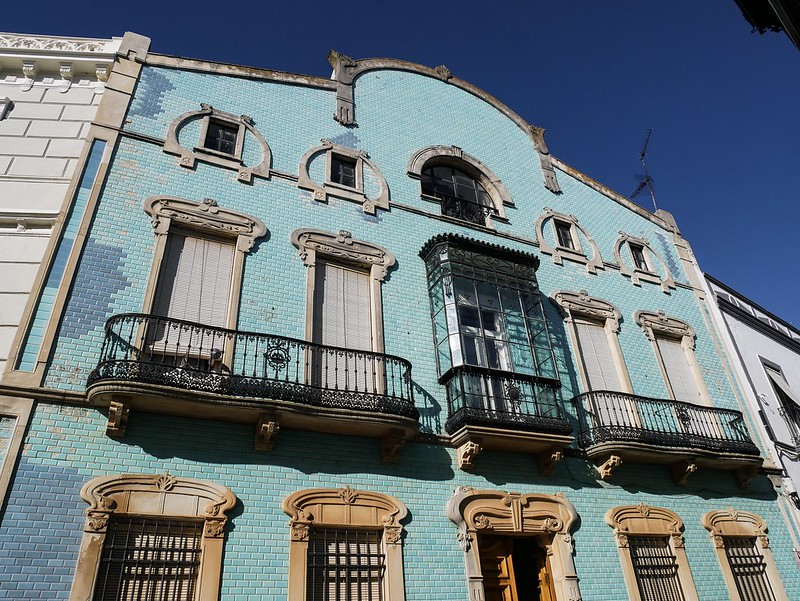 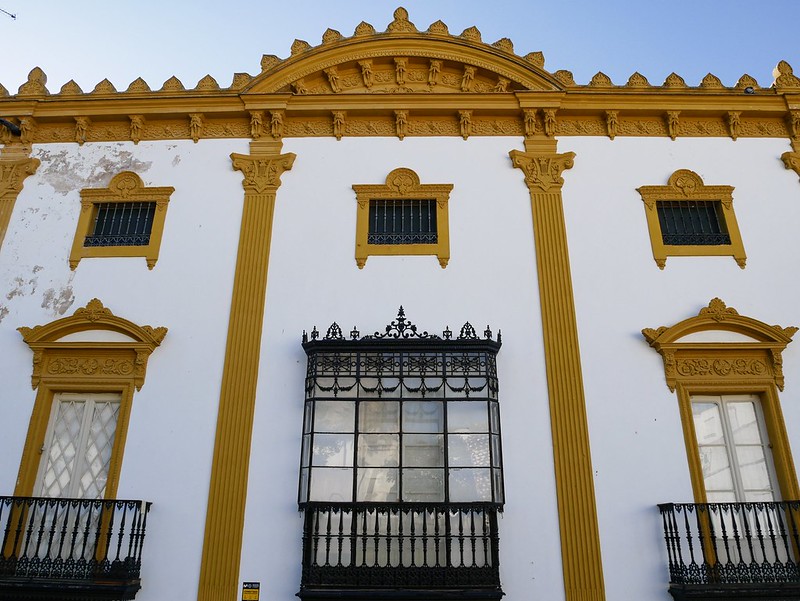 So we had a rather un-atmospheric walk through the town with a loud alarm going off in one of the buildings which added to the apocalyptic vibe as if looters had raided the shop. There were some nice plazas with palm and orange trees but the town didn’t have as much character as I expected. Most of the buildings were typical Andalusian white but there were a few who thought outside the box. These ones had pretty mustard coloured paint or blue tiles and the most fabulous glass balconies with black detailing. After a day of towns we were happy to head back to nature and spend the night camping near a lake. 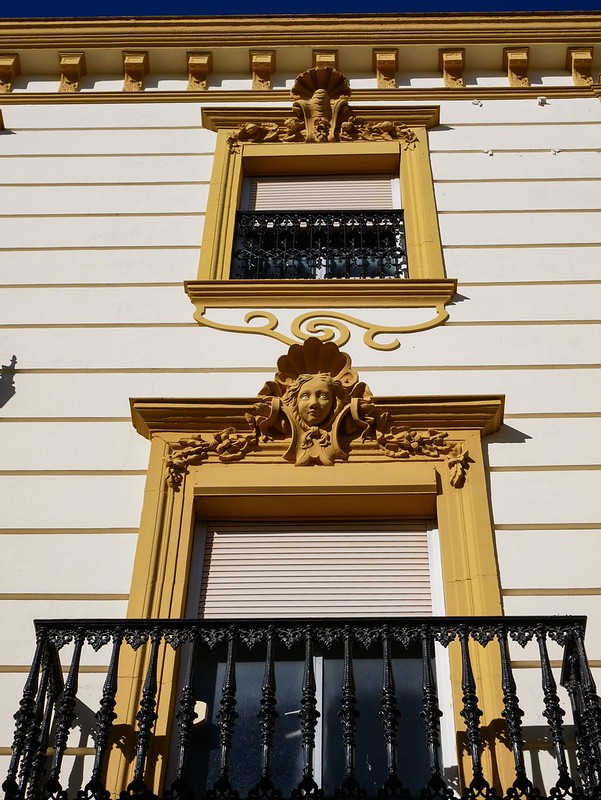 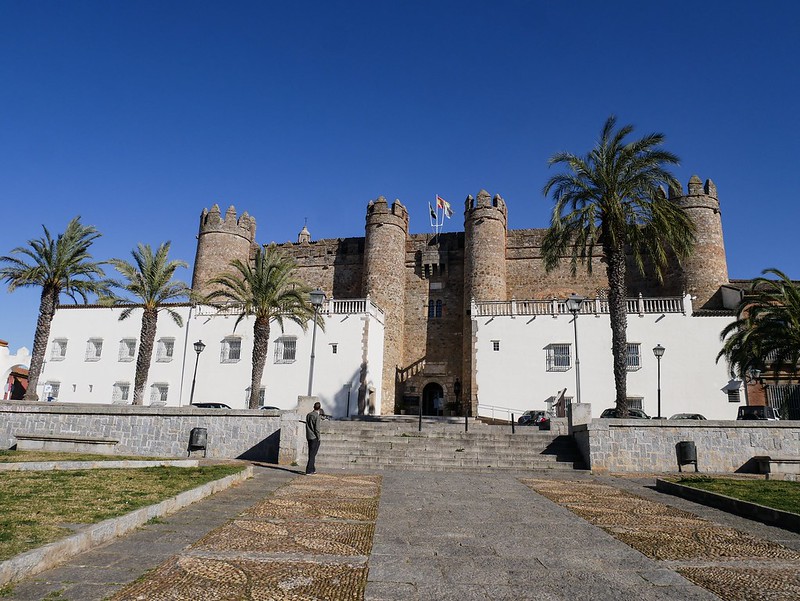 The following morning we headed to a rather unique sight in the village of Aracena. It was a cave system called Gruta de las Maravillas but it wasn’t in a natural environment like you’d expect, it was in the middle of the town under a castle hill. The only way to visit is on a guided tour which cost €10 per person and because it’s the off season we were able to just turn up and buy the tickets in-person. The entrance to the cave was through a normal building which was so odd. As we stood in the queue with the 20 or so other guests each group was taken to a green screen to have a photo taken. I couldn’t believe it, the professional looking photo they try to sell you at the end isn’t even taken in the cave, it’s a totally photoshopped image! We declined the offer of the photo and eventually we were all led into the cave. The guide only spoke Spanish so we had absolutely no idea what she was saying so we just lingered at the back of the group. We were led down some steps and into the cave system which was surprisingly humid and warm. The cave had a 1.2km path leading through the 12 chambers and past 6 underground lakes. 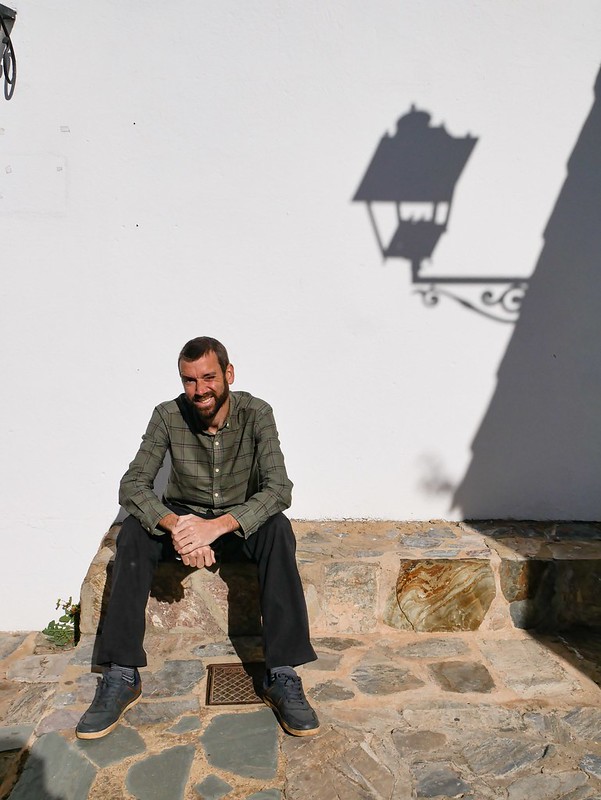 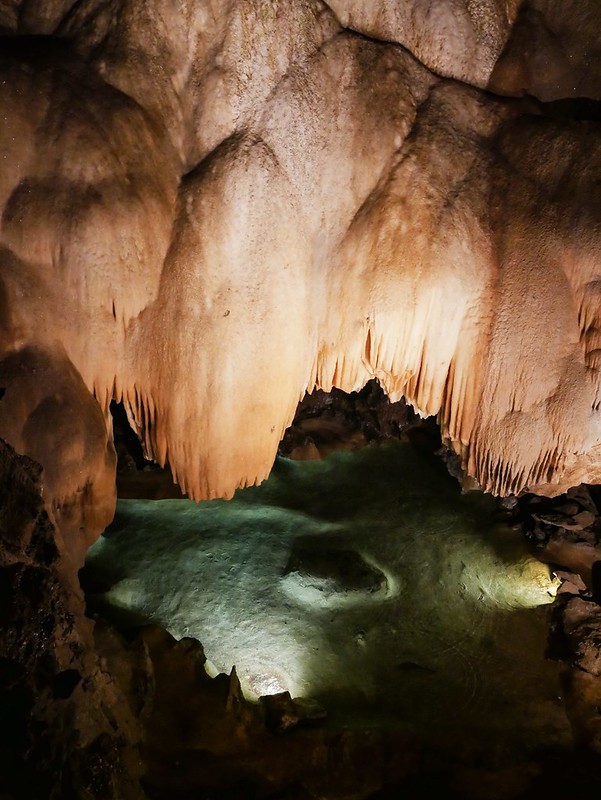 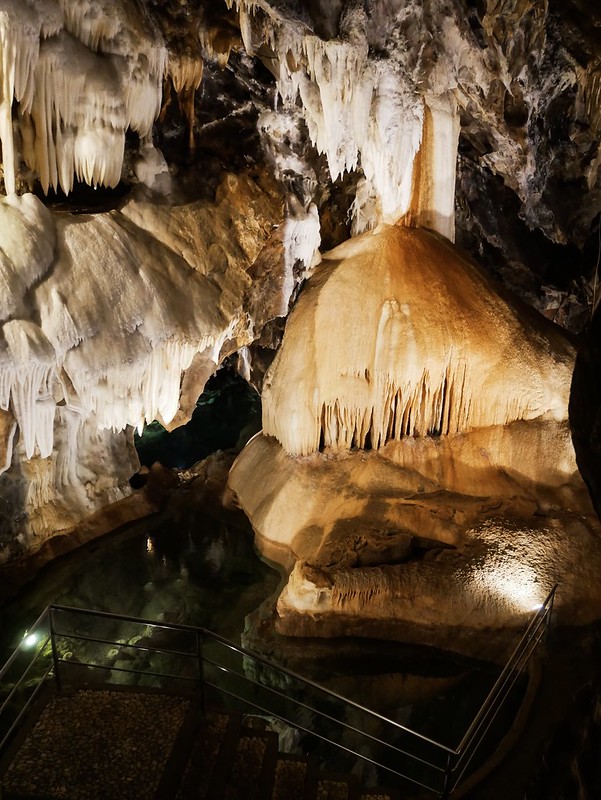 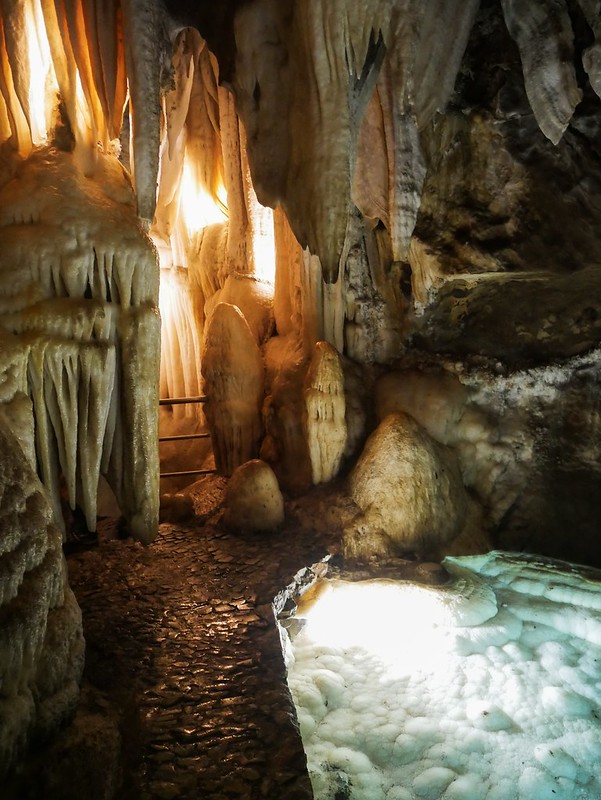 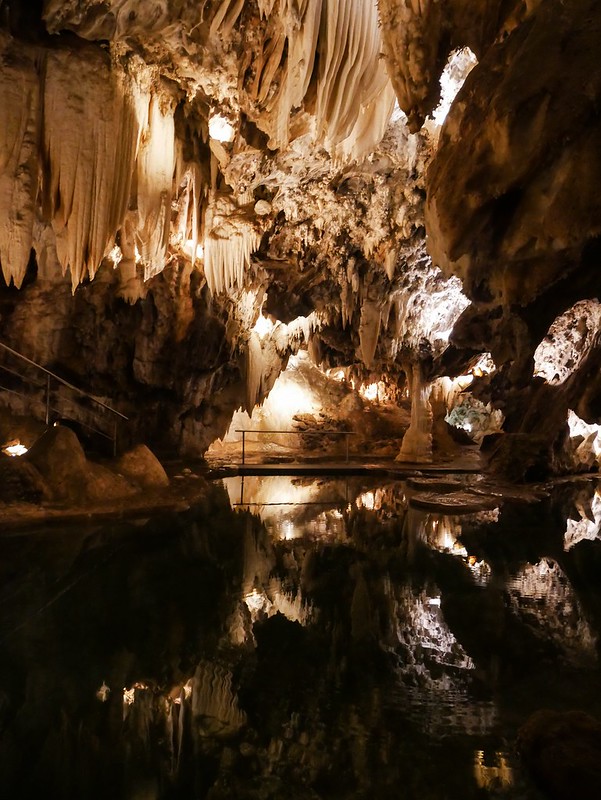 It was absolutely beautiful in person with stalactites dripping down from the ceiling and the most pristine, clear pools of water. The chambers were all lit up but in a subtle way with warm lighting – some caves we visited in Asia had ghastly fluorescent bulbs. There were even lights in the pools so we could see through the crystal clear water. Each chamber looked slightly different and we were led up and down stairs and through tunnels. We don’t often go on tours but we both agreed that this cave was well worth the visit, even if we had no idea what the guide was saying. 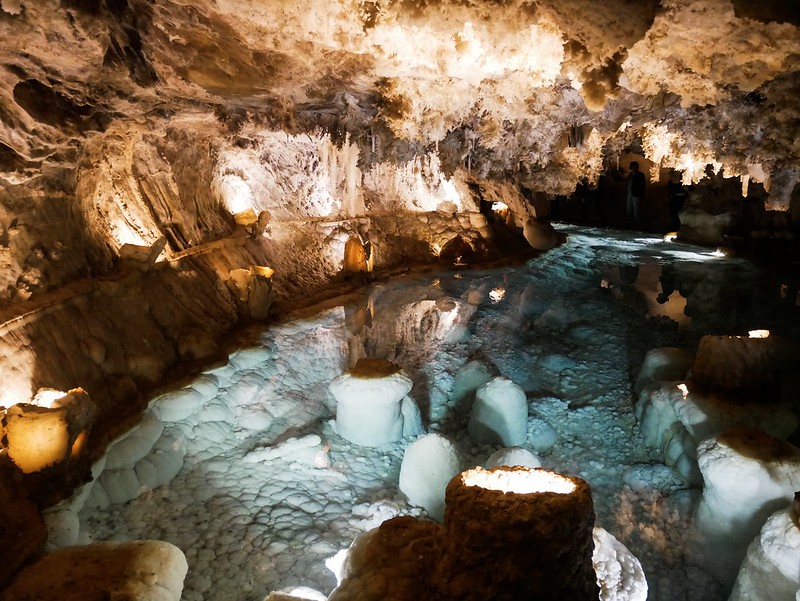 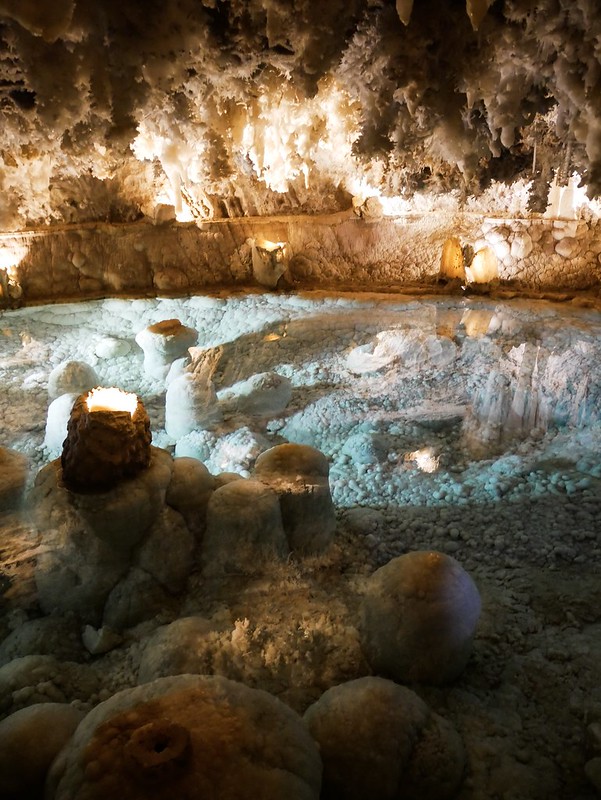 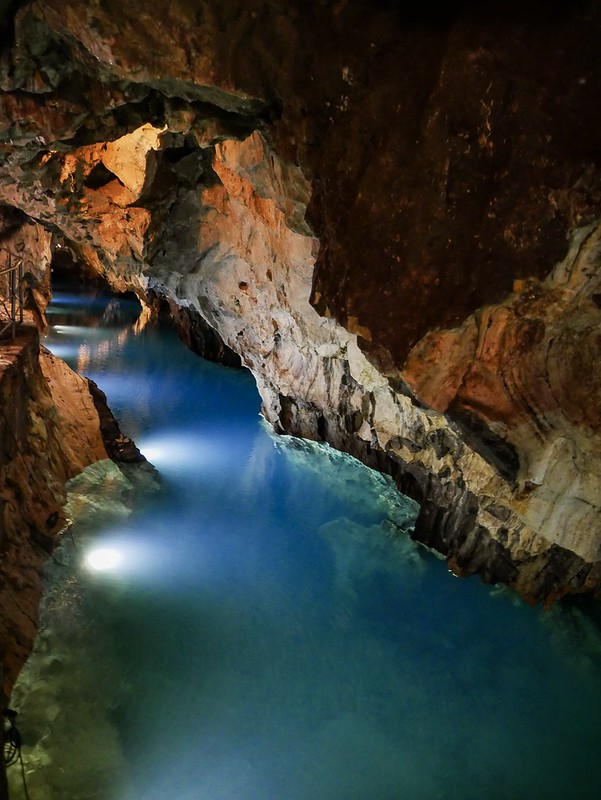 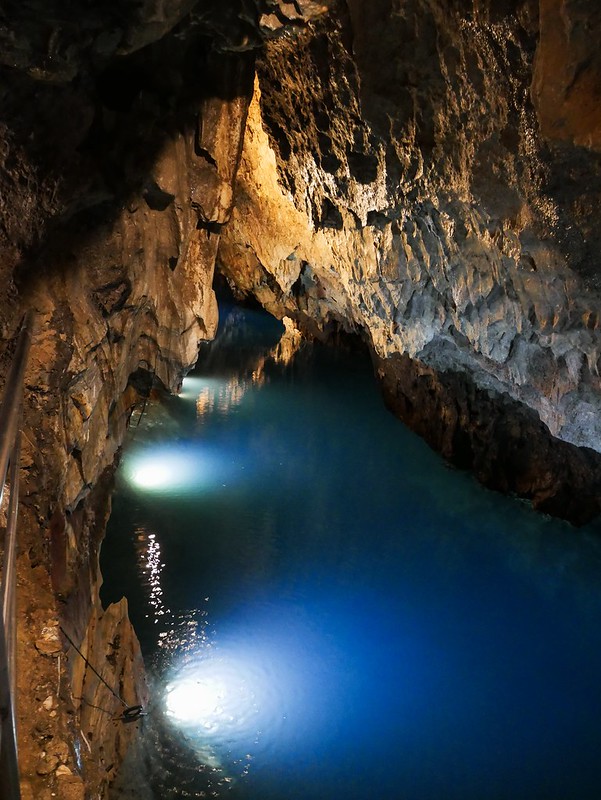