Spain is one of the best places in Europe to witness wolves in the wild, in fact the Sierra la Culebra region in north west Spain has around 3000 wolves which is more than the US States of Wyoming, Montana and Idaho combined. The area has a 95km mountain chain which is more like rolling, forested hills on a high plateau with plenty of scrubland in between. On our first evening we took a country road which was in the process of being repaired so we were driving extremely slowly over the bumps and potholes. We ended up at a junction with dirt roads heading into the wilderness so we pulled over as it looked like a good place to stay. We took a stroll to suss out the area and a dirt track led us to a train station, literally in butt-fuck-nowhere. It seemed like such a bizarre location, we were in the sticks, about 5km from the Portuguese border and no one lived nearby so I can’t imagine it being a popular commuter route. There was a proper building for the station but it felt like a ghost town with an empty carpark, two abandoned buildings nearby and not a soul around. One of the windows was smashed upstairs but there was a light on in one of the rooms and some fairy lights on a windowsill so we weren’t sure if anyone actually lived there, but the place certainly gave me the chills. The train platform had been so neglected that plants and moss were growing all over the platform. To access the other two platforms you had to check for trains coming before walking across a designated area of the tracks. We headed back to Helga and then walked down another dirt track, looking for any signs of wolves. There was an obvious ‘animal highway’ where we could see a clear path animals use and we were lucky that the entry point was all muddy so we had a clear view of animal tracks printed into the mud. It appeared to just be deer with maybe the odd pig but behind us on the road Craig spotted three wolf prints gently pressed into the clay floor. Wolves aren’t known to attack humans, they‘re shy animals who have probably learnt to associate humans with guns and death so they’re smart to stay clear…but even with that being said neither of us fancied the idea of weeing outside before bed with wild animals around so we used our toilet inside. 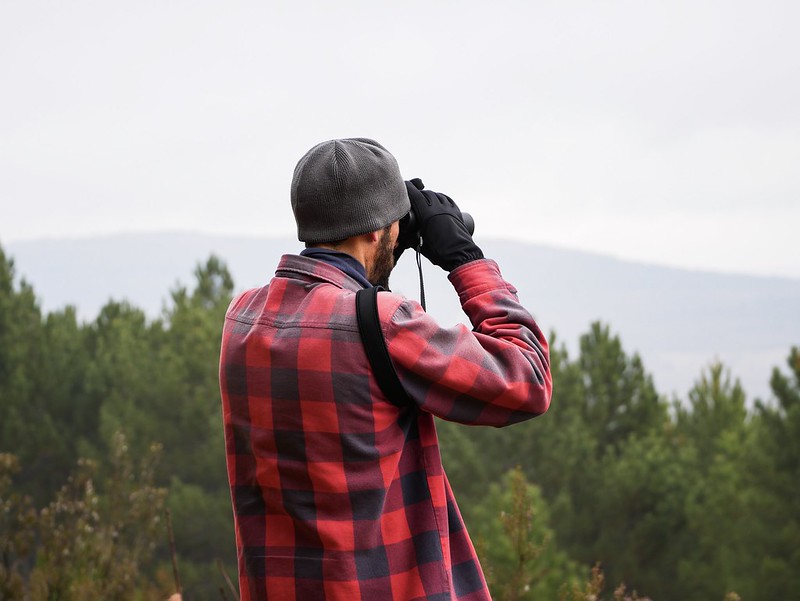 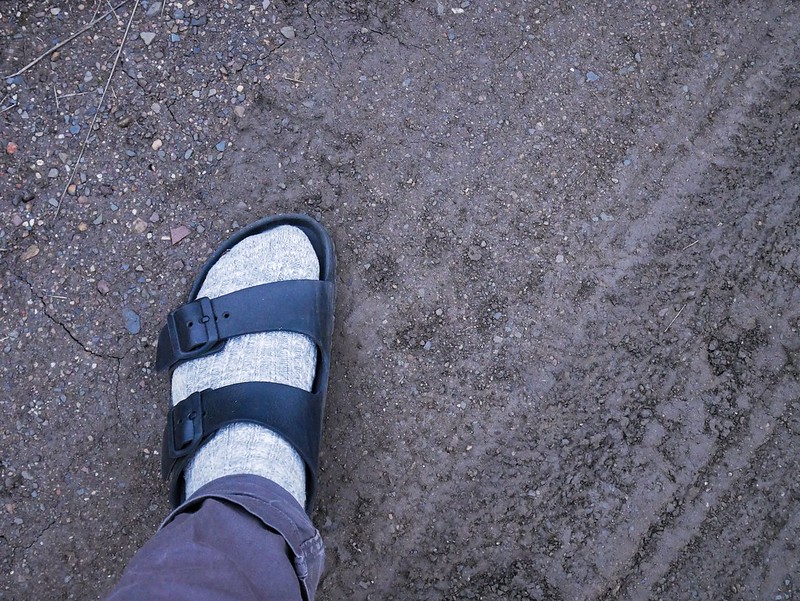 We woke early the next day as dawn and dusk are the best times to see wildlife. We heard a galloping of hoofs on the tarmac behind us which was probably some deer that heard us close the door. We had thick fog all around but as we drove up the bumpy road and gained elevation we ended up being above the cloud. We were treated to a lovely cloud inversion that teased us when we pulled over to take photos as we became re-engulfed by fog before mountain tops would appear like islands out the cloud again. 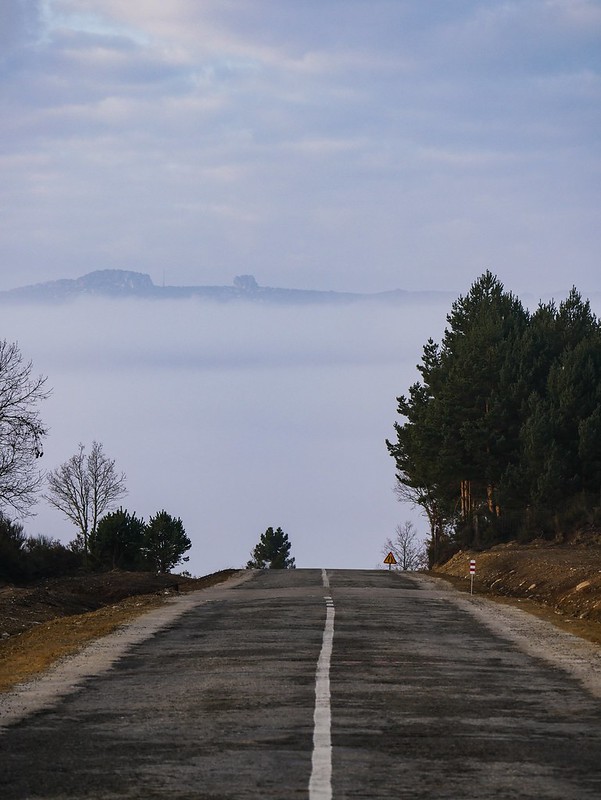 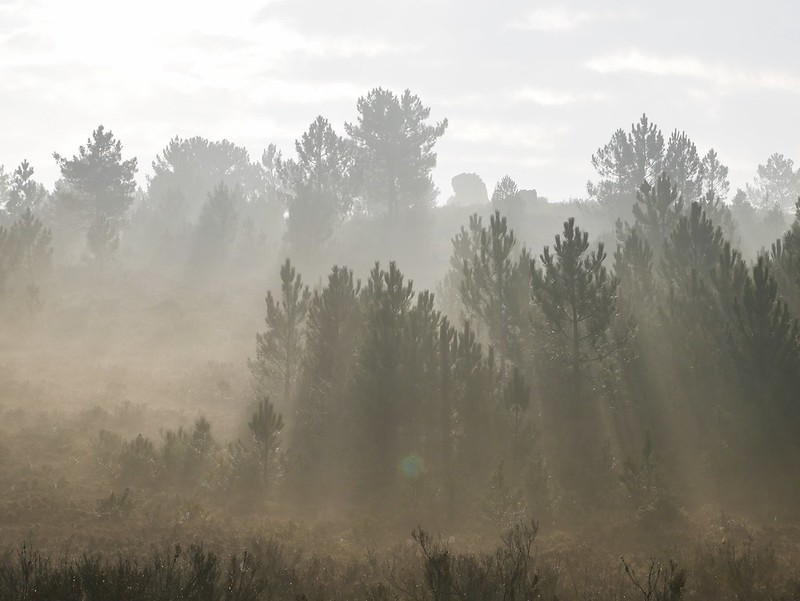 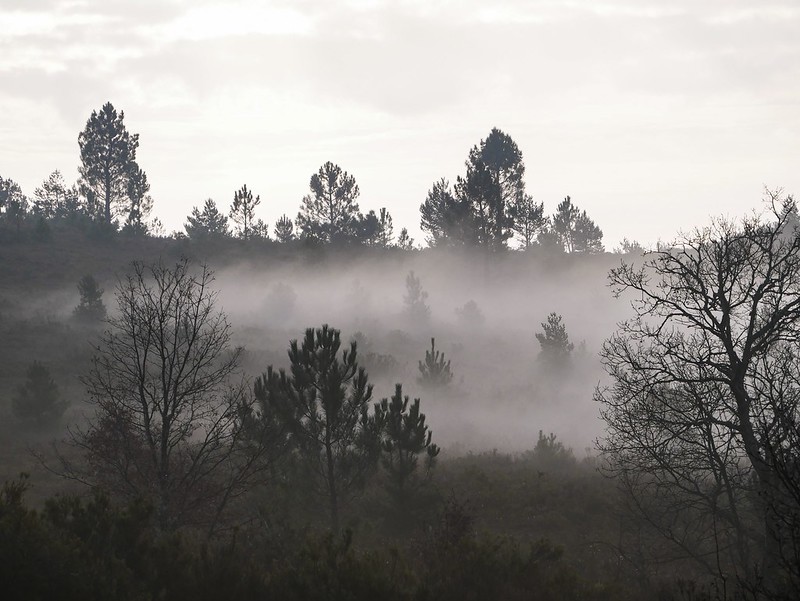 We took a lovely quiet country road and managed to see about 20 red deer. Some were right beside the road but they quickly ran away when they heard us coming but I managed to take a couple photos. We picked a random dirt track to walk along, searching for any signs of wolf but to no avail so we headed for one of the areas best known viewpoints called La Pista. It’s accessed along a red dirt track which was so bumpy we literally crawled along at the slowest speed possible. The viewpoint was an area where the road sat high on a ridge with the valley sprawling out below. It gave us a view across the entire landscape and it’s said to be one of the areas where a pack of wolves live. We noticed a wider section of the road so we pulled up there for the day and were gloating about how delightful it was to be able to wildlife-watch from our home on wheels. As soon as we began scanning the landscape with our binoculars we realised it was like looking for a needle in a haystack. Even if we did see wolves it would be from a great distance. Around 300 wolves live in Wyoming yet it’s so much easier to see one there than in this scrub covered region of Spain. 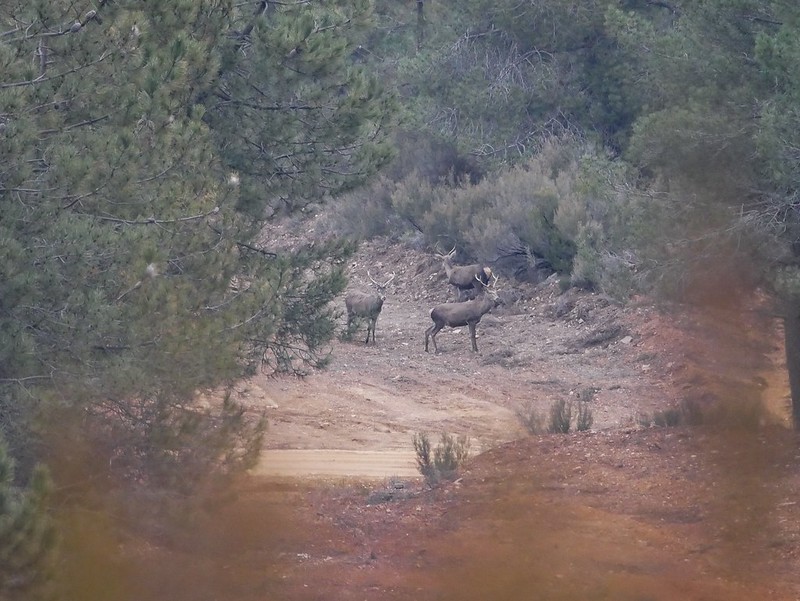 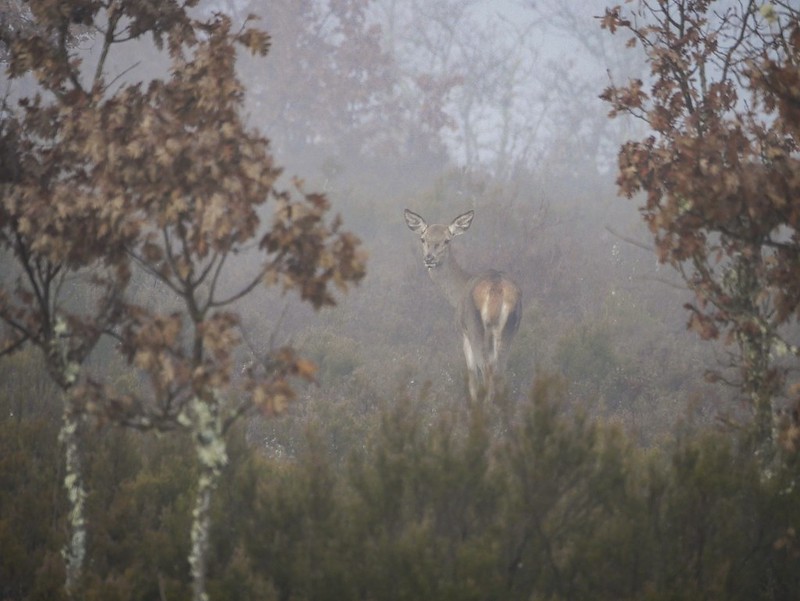 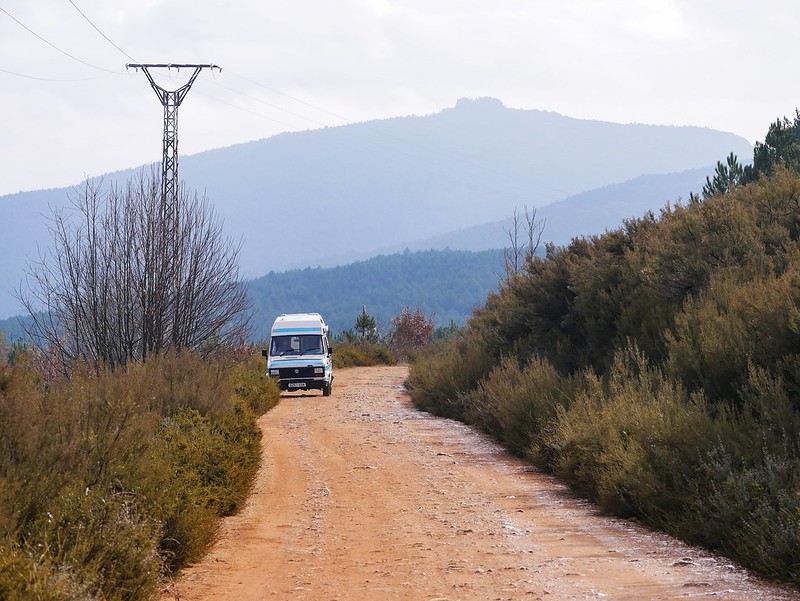 At about 4:30pm a guy walked up the road and did a sort of charades impression to say we weren’t allowed to park where we were. He didn’t speak English but when we asked he suggested it was for wolf watching only. It was a bit annoying as there wasn’t a sign to say we couldn’t park there but we didn’t want to piss off the locals so we did as he said. Craig left me there with our camping chairs and headed back down the awful dirt road to the main carpark before walking back up to me.

We ended up sitting in that spot for three bitterly cold hours. It was around 5° which isn’t too bad but there was a chilly breeze in the air and I quickly cooled down. The guy who told us we couldn’t park there was a wolf watching guide and he set up 6 scopes for his customers to use. It’s not an expensive tour from what I read in my guidebook, maybe €25 per person but I’d be a bit annoyed if my guide brought me to a place where the general public could also visit. He whispered to his guests the whole time and we had a little giggle because we weren’t sure if it was to keep quiet for the wildlife or so we couldn’t hear his important information about where to look for the wolves. I whispered to Craig “I can’t hear a bloody thing, shall I ask him to speak up a bit?”

Having the group there meant we had extra eyes looking across the landscape but to be honest they just seemed to be chatting the whole time and barely looked through the scopes. We saw a few deer at a great distance but that was all, absolutely no sign of the wolves. When we were in Canada we managed to find a wolf den after just one morning scanning an area where we’d witnessed a wolf. It meant we could go back everyday and watch pups playing in the meadow through our binoculars. So I would of expected the guides to know exactly where the wolves live but apparently on these tours there’s only a 20-40% chance of seeing them which isn’t just a low chance but it’s also very vague. 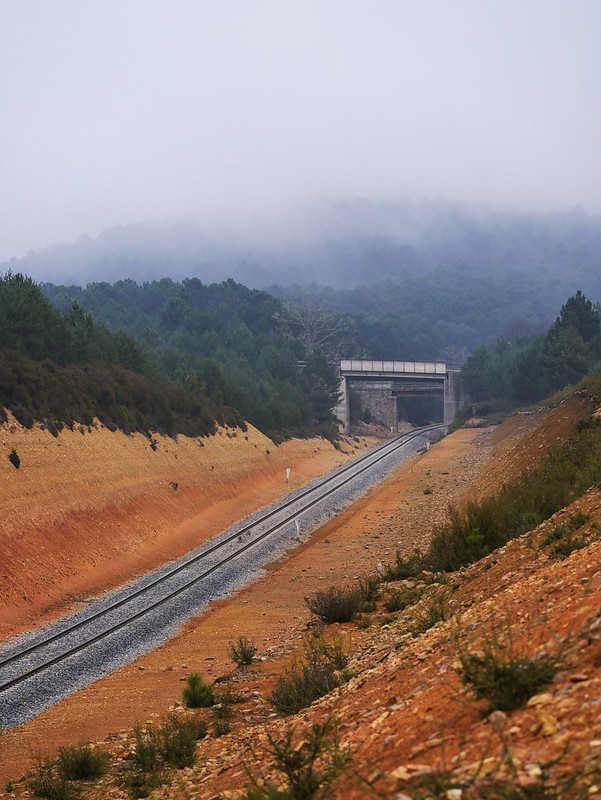 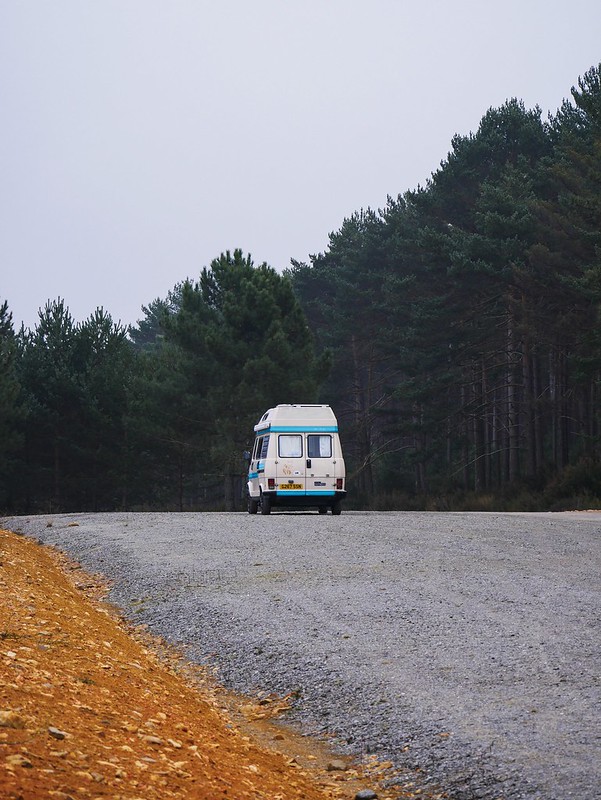 The sun went down, the clouds turned pink and our teeth began chattering so we decided to pack up and walk back to Helga for a very late dinner. When we woke up the next day thick fog surrounded us which meant we didn’t have any chances of seeing wolves. We decided to have a slow start and eventually walked back to the viewpoint where the cloud had just about lifted. Craig managed to spot some stags but no wolves so we decided to drive to the next viewpoint near the village of Ferreras de Arriba. A short walk along a dirt track led us to the viewpoint but it was void of any life. We did see plenty of deer tracks in the mud along with a tiny paw print which we couldn’t identify, some sort of ferret sized animal. Craig was engrossed with scanning the valley below us that I decided to play a little prank on him. I found a stick and pressed a big paw print into the mud with big claws. I just had time to do two prints as I didn’t want to get caught by Craig. They were much bigger than wolf prints, more like a bear actually so when we went to head back to Helga I made a big point of spotting the prints to see Craig’s reaction. My acting skills were on point and it was quite easy because Craig was staring at the ground trying to figure out what animal had left them, had he been looking at me he’d see the cheeky smirk on my face. He immediately said it looked more like a bear print than anything else and I was agreeing. He then tried to figure out why there were only two prints and I really had to contain my laughter here as he re-enacted how an animal would walk the route “well, boom…boom”. Of course Craig had to find a scientific explanation and was coming up with all sorts of ideas but still the prints were a mystery to him. I waited until we began our walk back before I told him that I was responsible for making the prints…oh how I roared with laughter. What made us laugh even more though was when we realised the next people to visit this site are going to be just as baffled as Craig was about what animal could of left these prints. 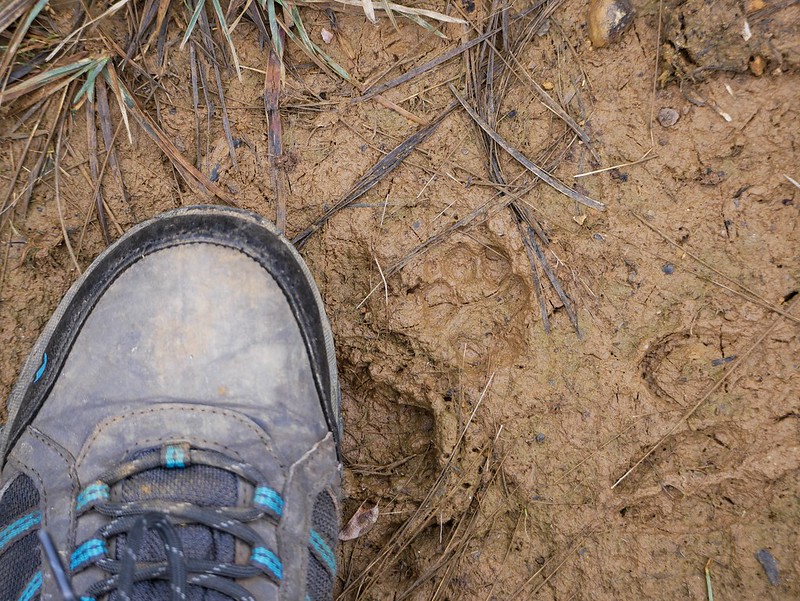 We felt a little gutted to not see any wolves but we didn’t have time to stay and look, well, we had the time but the weather was due to get much colder and we had already been so lucky to have cloudy nights with just a couple degrees below zero. So now it’s time for us to make the big drive to the south of Spain.