When we woke up our thermometer was reading -5° inside which we’ve coped with before so nothing too crazy. Somehow only the windows on the passenger side of our van were frozen, the rest weren’t which was bonkers but we think it’s because we parked next to a wall, it must hold onto some heat from the day and I think it really helped us! We started the morning with an unknown hike up a hill beside the village. It was a great location, sitting tall in the middle of a valley so we had a 360° view of all the snowy mountains around us. What a great way to start the day! 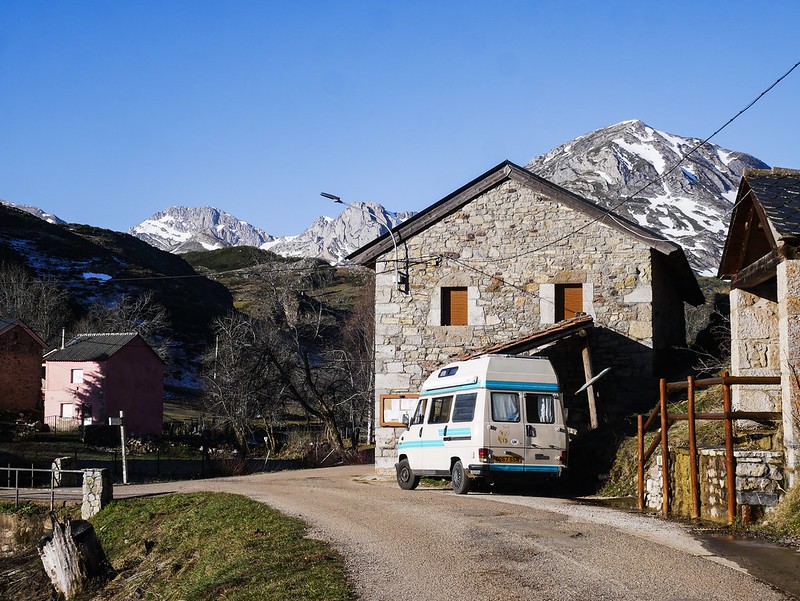 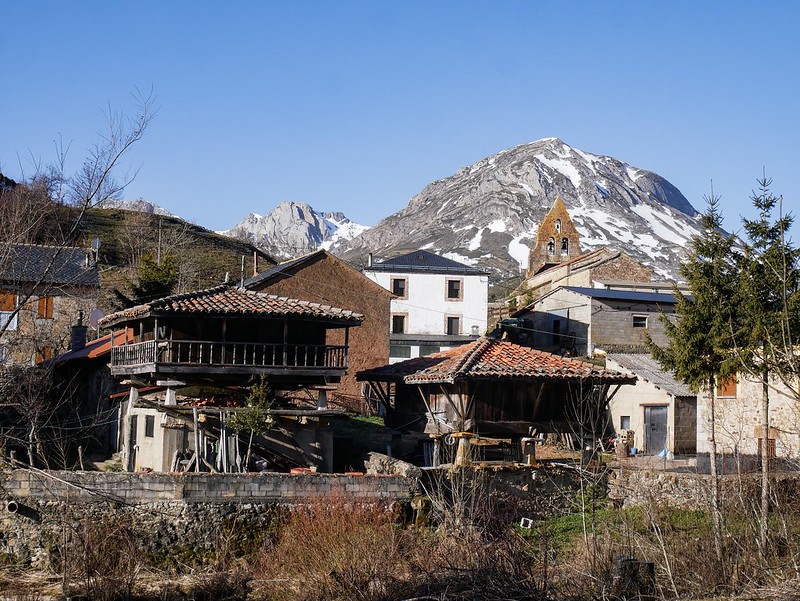 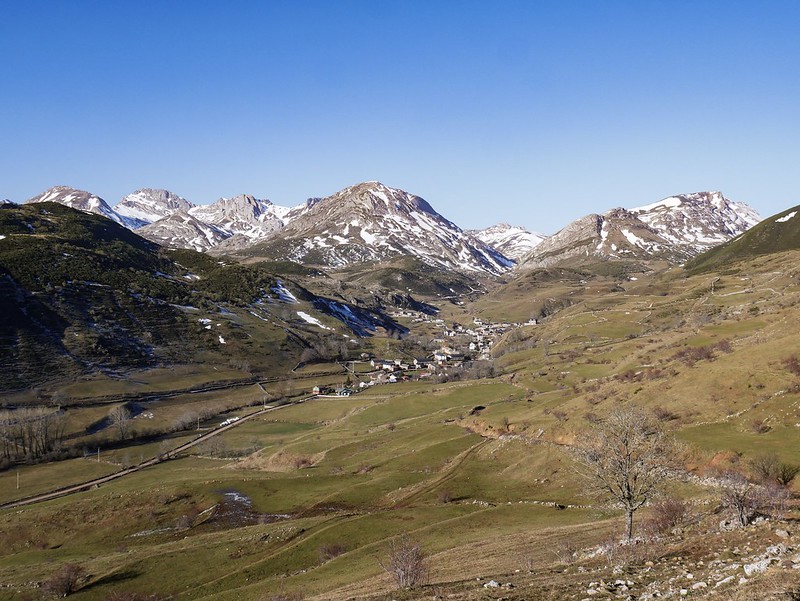 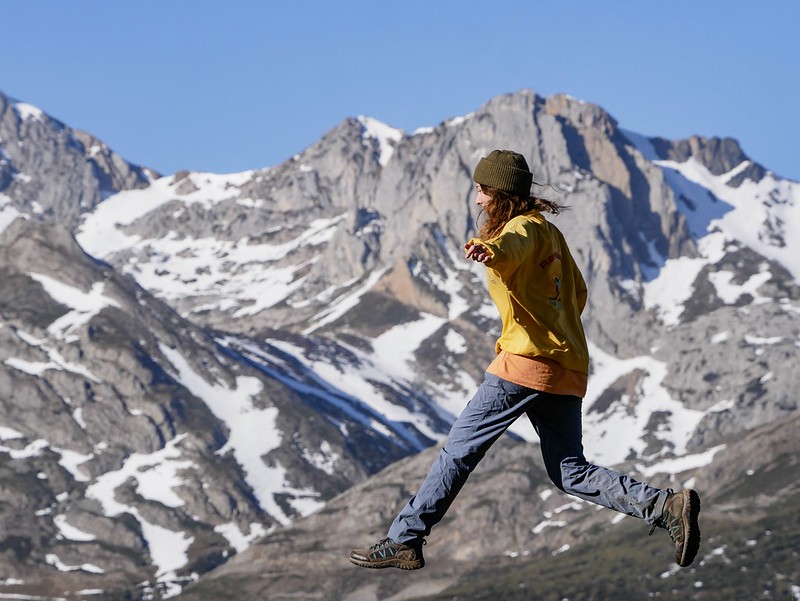 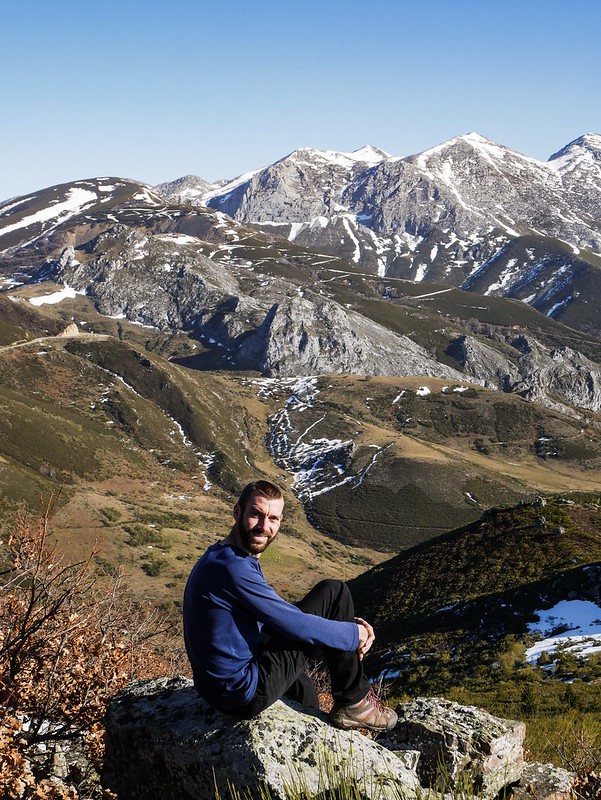 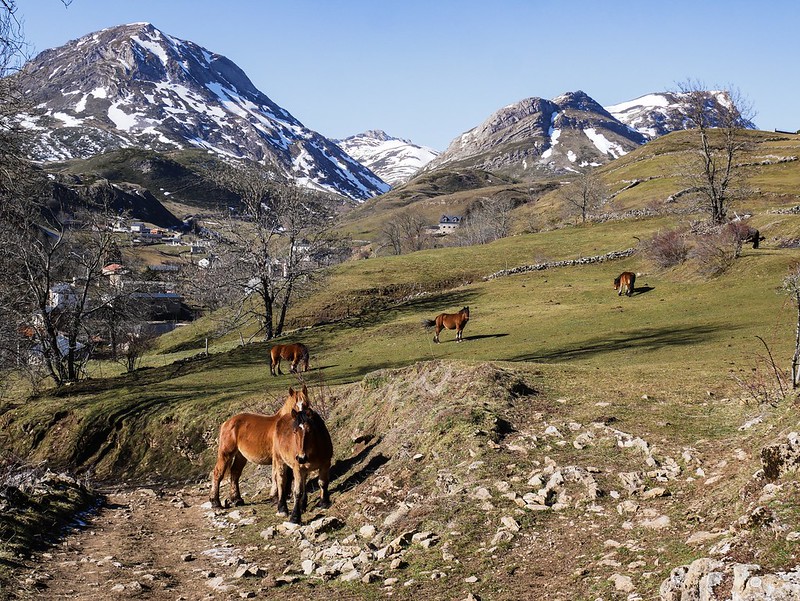 Then we headed off back towards San Emiliano and before we got there we found a perfect little pull out for lunch. We had a million dollar view of the mountain range. The sun was shining so we opened our side door and basked in the sunshine while eating some egg mayo sandwiches and ham flavoured crisps which is new to us. After a little chill time we set off on another unknown route up a hill. We ended up reaching an area with cows and after our scary experience with them in Ireland we felt a little unsettled not having an escape route if they charged so we headed back a little and found a different route up the steep hill that ended up being covered in prickly bushes which stabbed our legs like a painful acupuncture session. The view from the top was pretty spectacular, the giant, grey mountains rose straight ahead of us, it was a similar view to this morning but much closer. 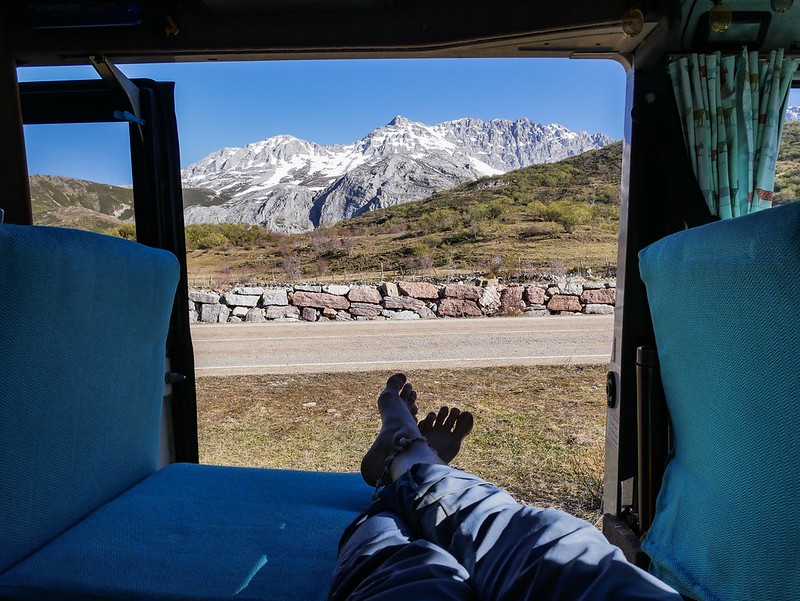 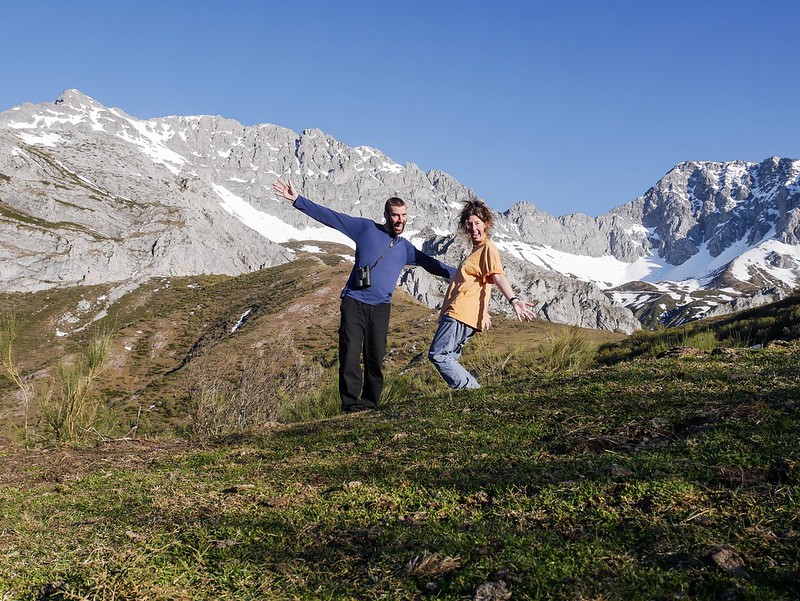 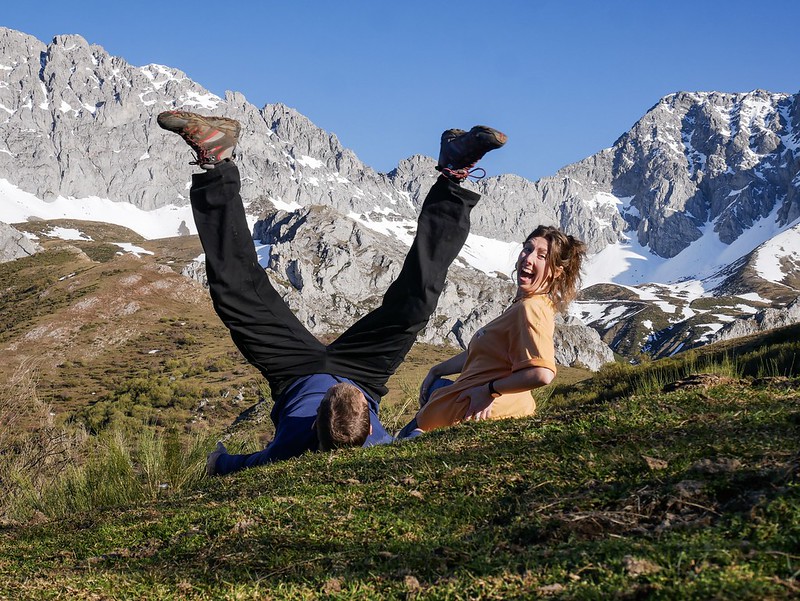 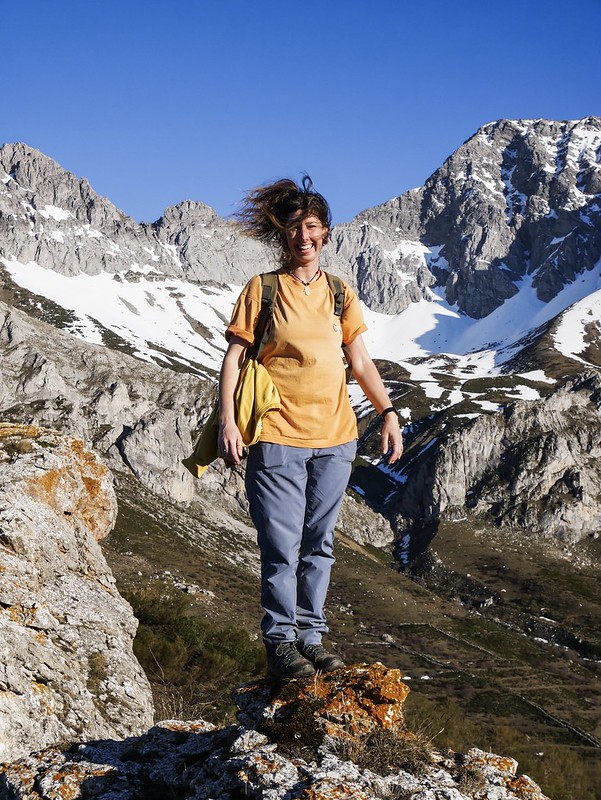 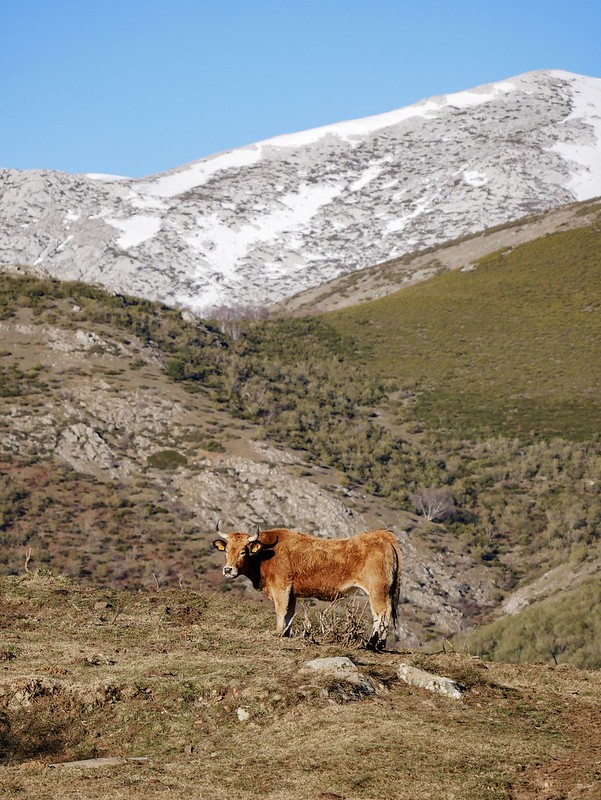 We didn’t get back down until just before sunset when the mountain peaks started to glow red. We were parked next to a field of cows where two huge guardian dogs protected the livestock from wolves. They were just laying down and relaxing until the sun dipped below the horizon and that’s when they seemed to report to duty. The gentle giants were barking and growling, goodness knows what at, maybe we had wolves around us or maybe they were actually barking at us? Ironically we did see a possible wolf scat a meter in front of our van earlier, it was mostly made up of fur which is usually a sign of wolf poop. The dogs stayed on duty all night, barking sporadically and we decided there was absolutely no chance we were going outside for a wee, due to equal amounts of fear from the dogs and potential wolves. 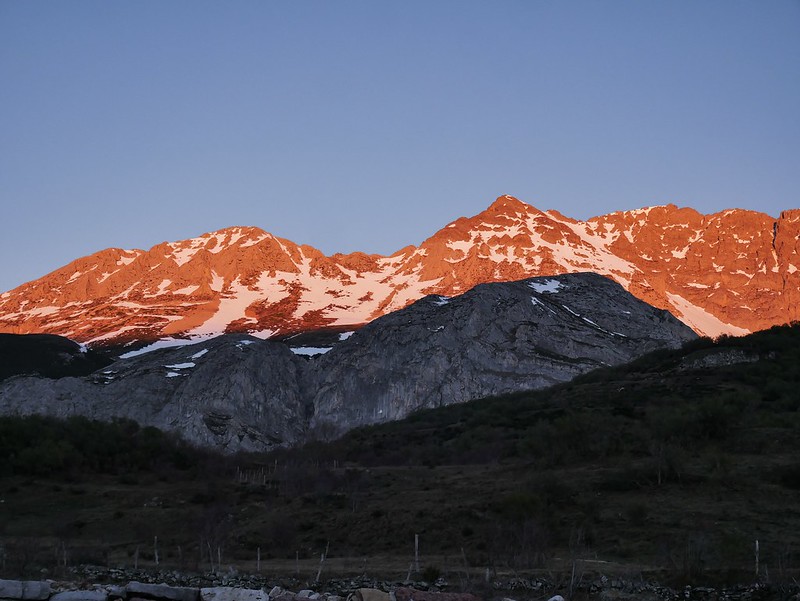 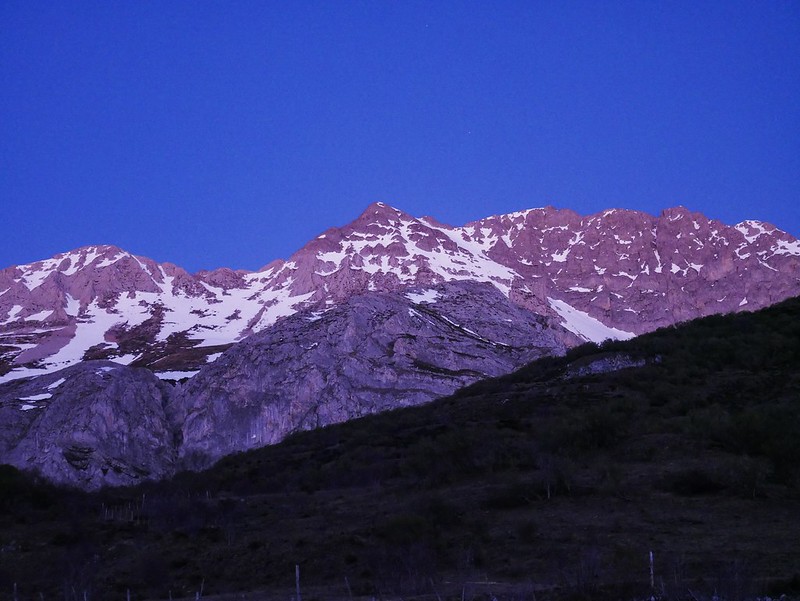 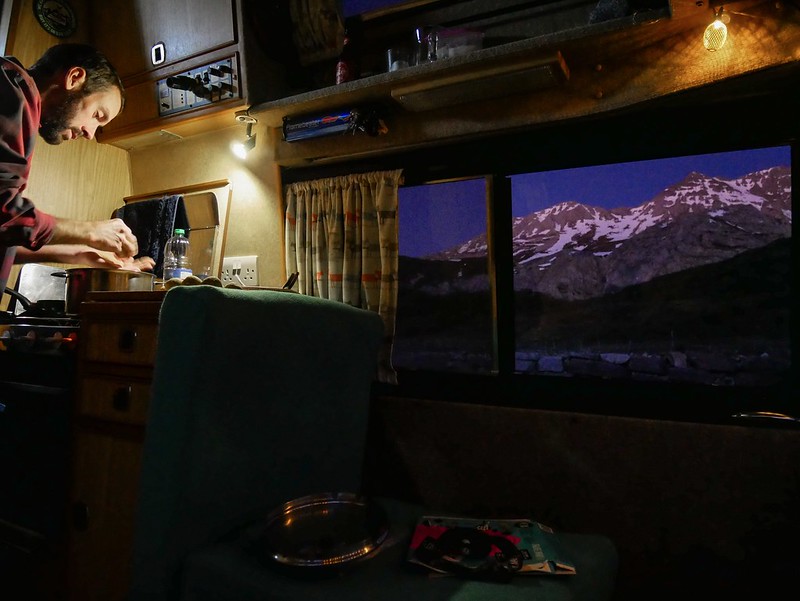 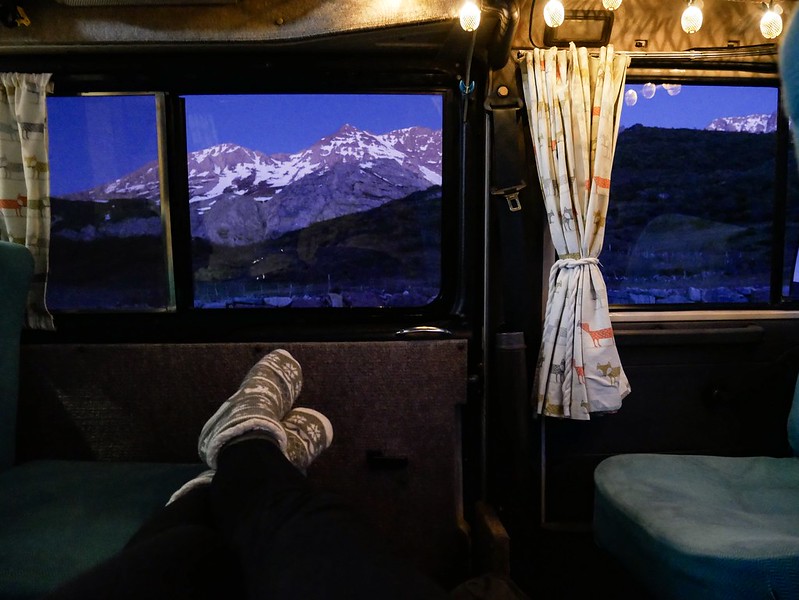 The sky turned the most perfect blue colour at twilight with the snowy mountains gently illuminated, it actually looked like a desktop background had been projected out my window. There was a bit more of a chill to the air tonight, even though we were about 200m lower altitude compared to last night. Craig tried to run some water through our boiler but there wasn’t enough water coming through the pump to fire it up which was a little disconcerting. Unbeknown to us it was our pipes and filter on the outside of the van already starting to freeze at 10pm. We also noticed our toothpaste didn’t flow down the sink which meant our sink pipes had also frozen, which is an issue we’ve had most mornings in Spain, but never in the evening. There wasn’t much we could do now, we were committed to staying in the mountains and just hoped that we’d survive just like we did last night. We left our taps all open so any freezing water had space to expand and Craig put a pan of boiling water inside the cupboard under the boiler and a smaller one atop the water pump. 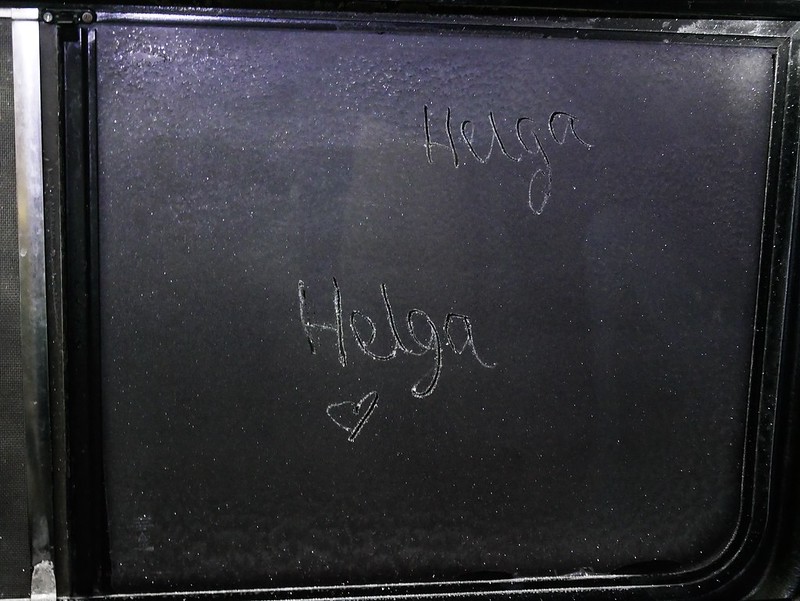 Helga was like an ice block when we woke up. Our thermometer read -10°!!! What the heck…how did it get that cold? A thick layer of ice covered all our windows in a misty haze. When we scraped the front windscreen our dash looked like it was covered in fresh snow. The hot water we’d put in a pan atop the pump was partially frozen too, as was the flush in our toilet. We quickly drove to San Emiliano in search of a place where the sun would hit Helga as soon as it was above the mountains and hopefully thaw her. 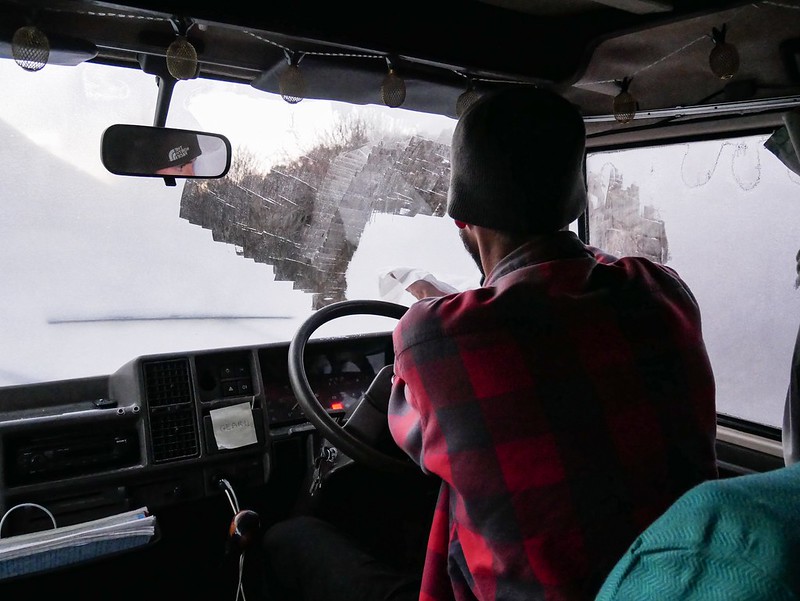 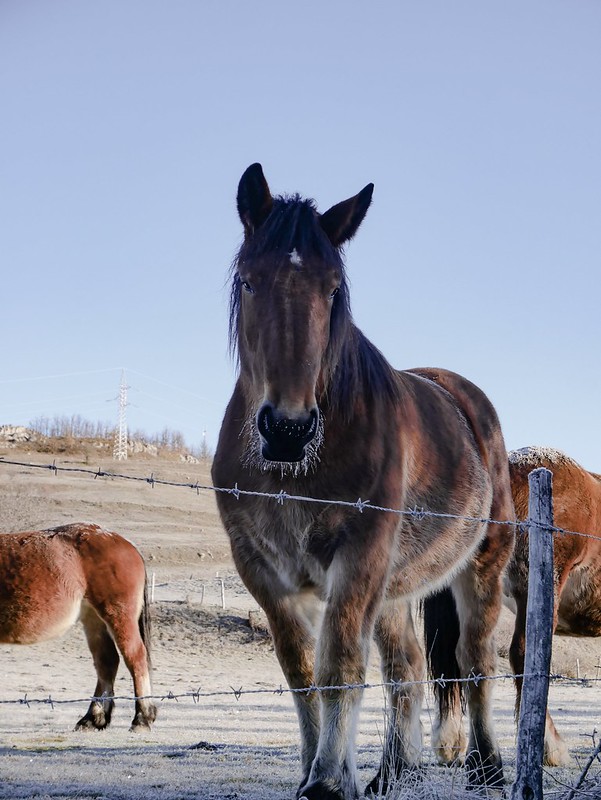 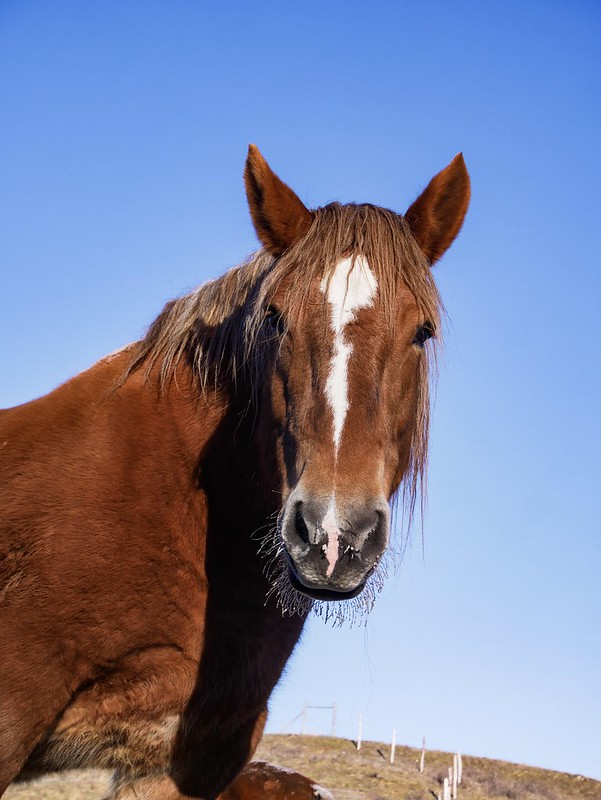 We tried to warm up by doing a hike but there just wasn’t any sun in the area, the mountains were too high in this valley so we were freezing cold. So cold in fact that my hair was starting to freeze and the horses and cows we walked past had frosty backs and tails. We passed through a village with the worlds most depressing playground (in our books) as it was tucked into the bottom of the valley and would be lucky to get any sun in winter. We climbed up a pathless hill and stood atop a ridge line, finally in the sun but we couldn’t quite relax as we were concerned about Helga so we headed back down. Helga was sat in the sun which was great news but we noticed our water reader suggested we were low so Craig went out to investigate. The water filter on our outside pipe had cracked and all our water was dripping out! Noooo! 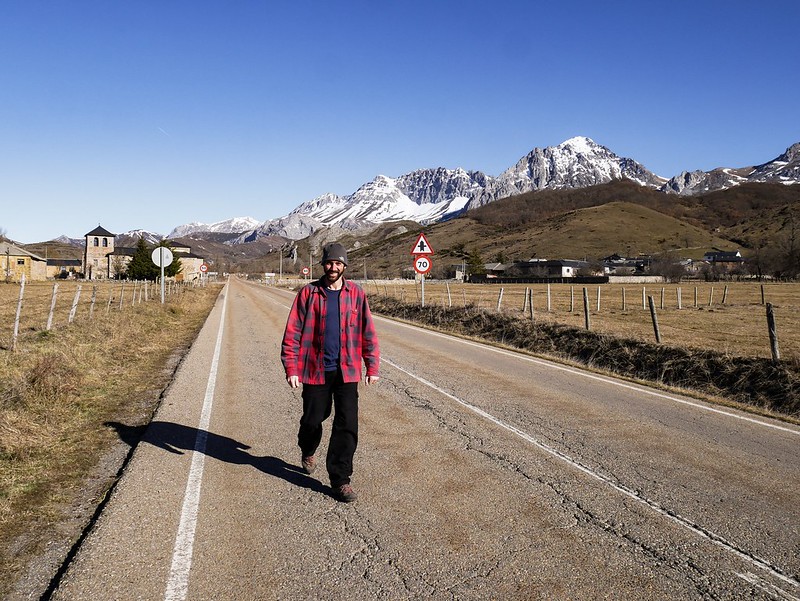 We knew we had to leave the area, our fun in the mountains was over, but first we had to figure out the best route. We didn’t particular want to take the motorway again and we noticed the road we were on in San Emiliano led exactly to our next destination, but it was a mountain road and we didn’t want to come across ice. So we asked a nice local guy and he said it would be fine, a little uphill and then hairpins all the way down which was fine with us. We ended up having a conversation with him in broken Spanish and he showed us a photo he took in his car at 8:30am this morning, the temperature read -13° so it was even colder than we thought!! We also got talking about bears in the area and he showed us a photo his brother took of a perfect bear foot print in the mud. And he told us a 75 year old pensioner was attacked by a bear last summer. 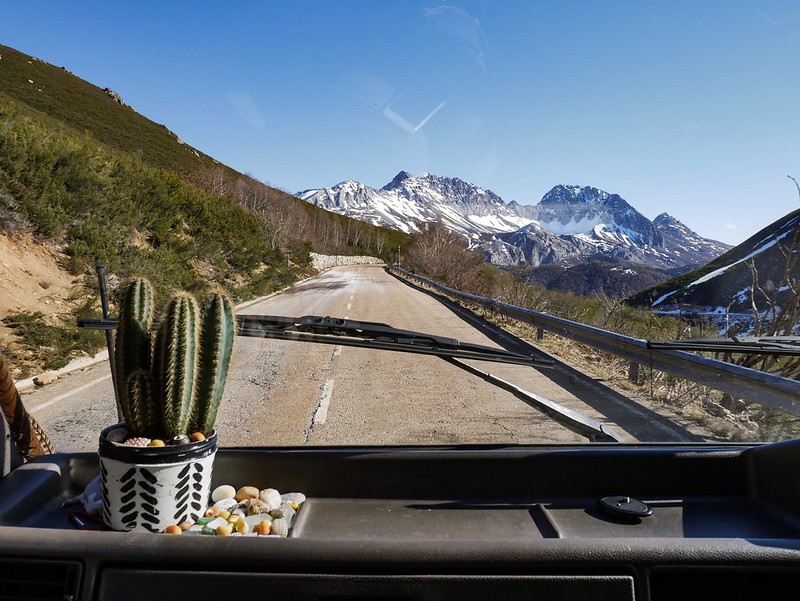 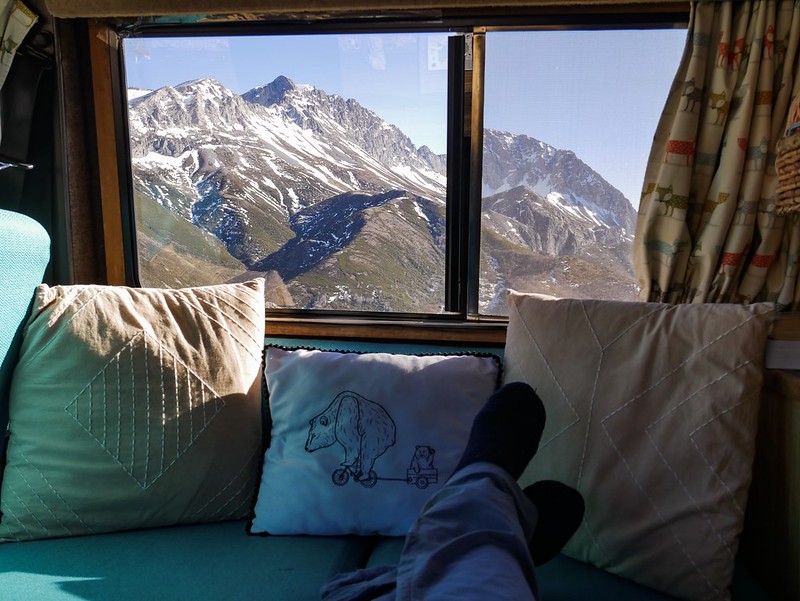 So we hit the bizarrely empty road and felt like we were royalty and the whole route had been closed to the general public. It was easy going up to the viewpoint where we got a fabulous view of the mountains and observed the rest of Helga’s water leaking out. Shortly after we reached the pass at around 1500m. There was a dirt track skirting around the mountain side which we followed on foot for a view across this side of the valley and after that we were rolling down the hill in Helga. 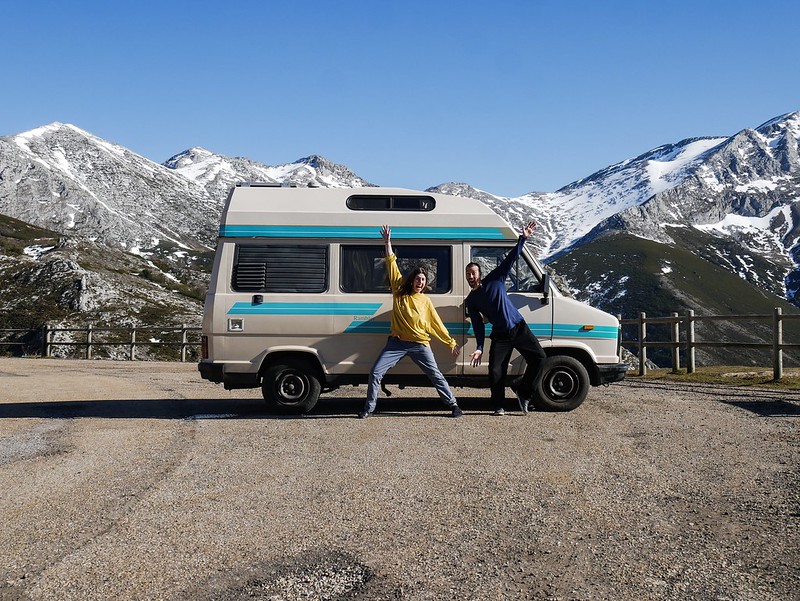 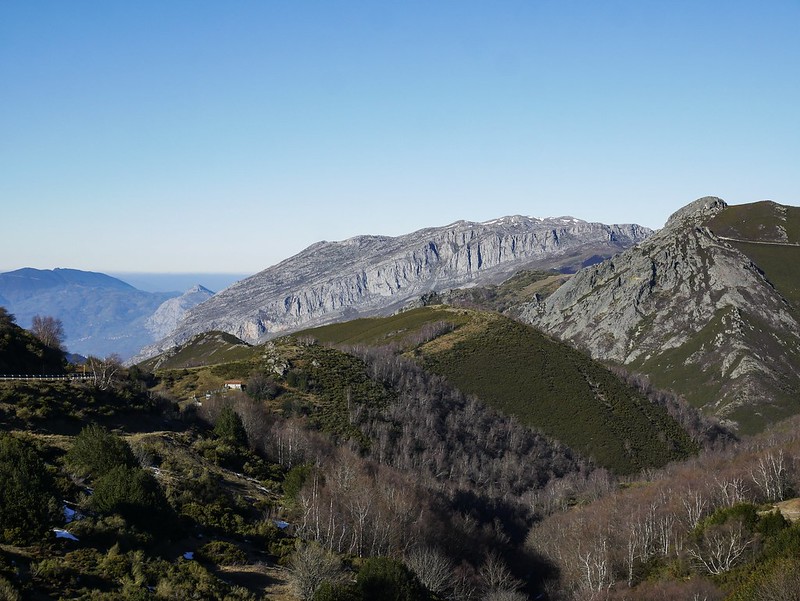 We weren’t able to test if we had any other leaks until the following day as our water tank had totally emptied of water. Craig used the opportunity to tape the cracked filter and fill up our tank with water and it seemed to be holding pretty good with just a minor drip. We nervously tested the pump and thankfully it all seemed to be working as normal. What a relief!! 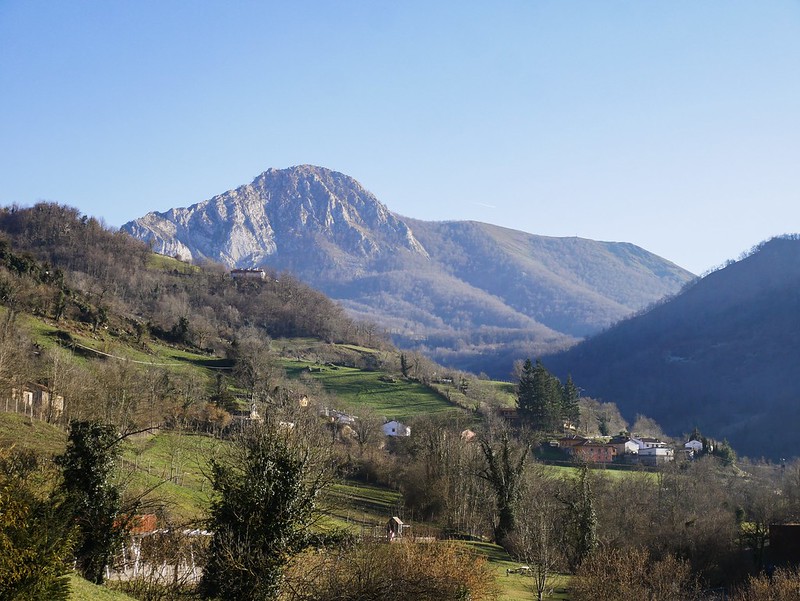