As we left the high mountains we descended into a series of deep canyons and rocky tunnels, driving alongside the Senda Del Oso, which translates to Bear’s Path. It’s a popular cycle route along an old mining rail line and it leads to an enclosure with two Cantabrian brown bears who were recovered from poachers and unable to be reintroduced into the wild. We weren’t planning on cycling so we just did a morning stroll to the enclosure which turned out to be a depressing experience. I hate zoos but we’ve been to quite a few animal sanctuaries on our travels but this one felt different. We only saw one of the two bears and after a short walk across the frosty grass she came to the fence line and walked back and forth like she was in a trance. I think if you have an animal that can’t be reintroduced to the wild and you keep it in an enclosure it needs a really spacious area to live in so it gets a slight sense of freedom, along with plenty of obstacles to climb and a pool to play in. We visited a really good bear sanctuary in Montana and they all acted pretty similarly to bears in the wild. The workers even hid fruit under rocks for them to dig up and find. So yeah, in comparison this looked like a very sad place for the bear to be. 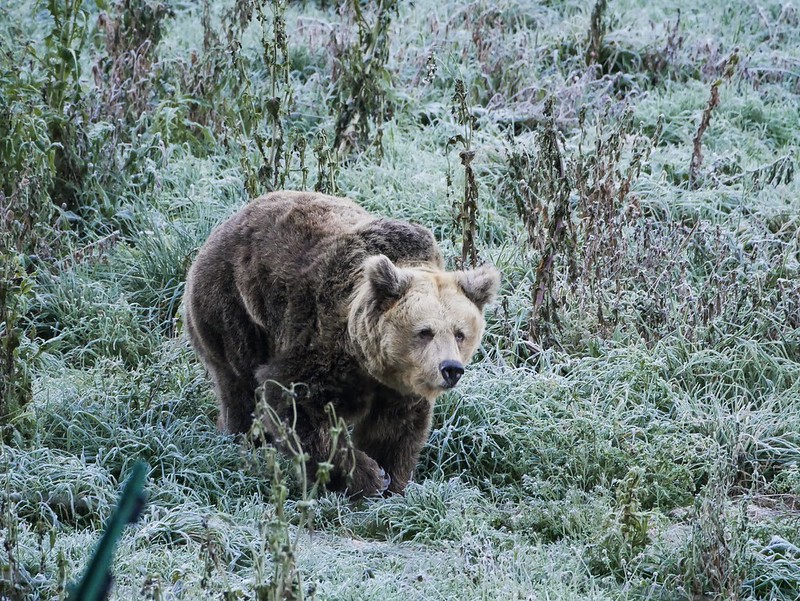 We drove a few kilometres up the road to the start of today’s proper hike. We were hiking from Las Xanas to Pedroveya via a scenic canyon. We didn’t arrive until 11am and we were surprised how busy the area was, the car park was almost full! The canyon was similar to Cares Canyon in Picos De Europa, but less impressive and much busier so I didn’t take many photos. After the rocky canyon we walked through a forest with a trickling stream and waterfalls before the path opened up and we were standing in a pasture with a little church ahead of us. Much to our delight there was a group of miniature ponies roaming around the church and a giant guard dog (basically the same size as the ponies) laying on the floor and keeping them safe. My goodness I couldn’t believe how adorable they were, their fur was so fluffy and their little faces seemed to have a wee smile on them. Stroking their backs made my skin crawl though, it felt all lumpy under the fur like it was covered in ticks, and if it wasn’t ticks I have no idea what it was, so I stuck to just stroking their cute faces. 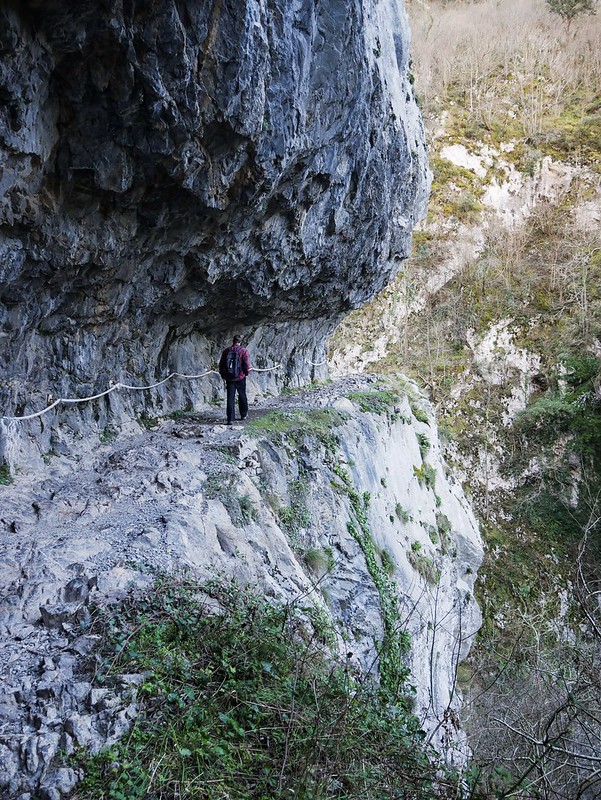 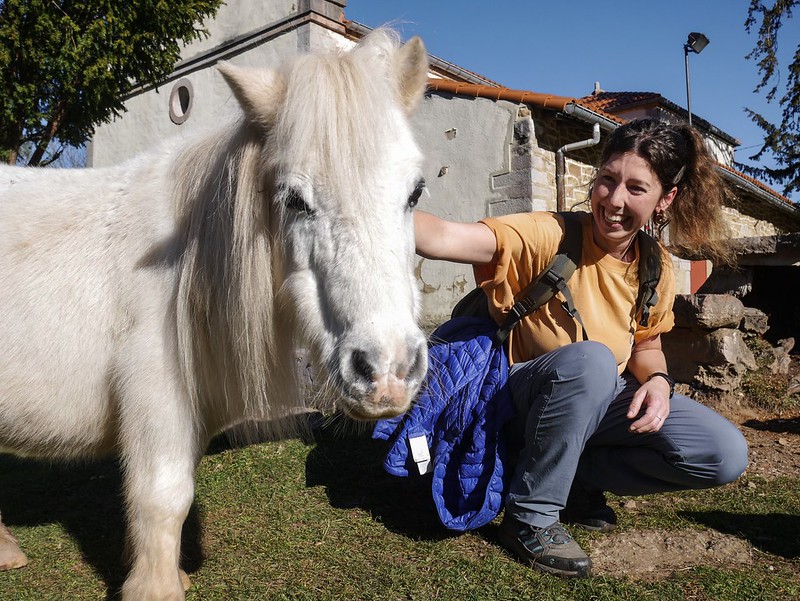 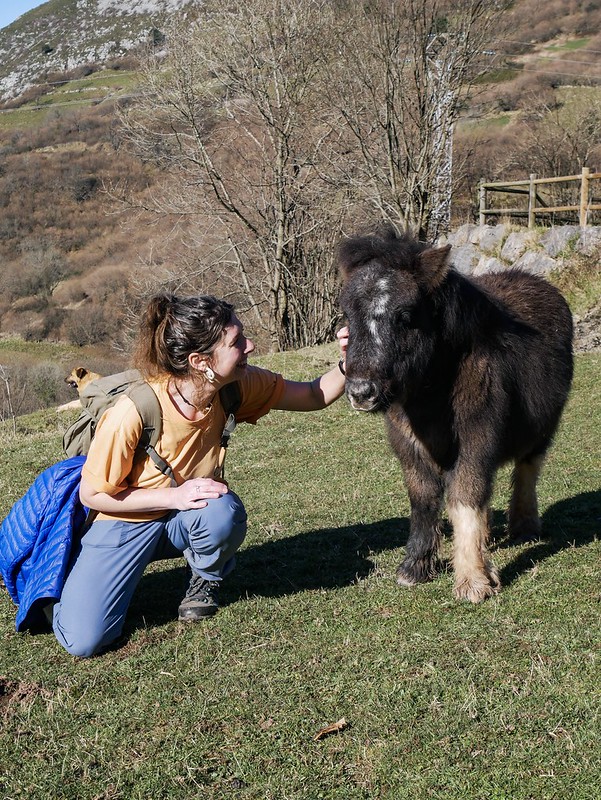 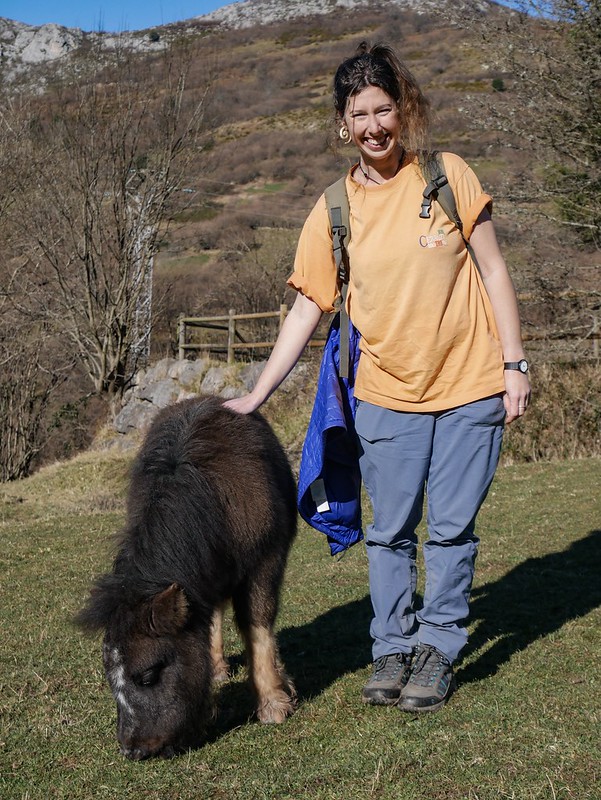 The ponies were clearly fed by humans so they were trying to chew peoples bags outside the church, looking for food. We didn’t want to sit near all the people so we picked a spot on the grass not far from the guard dog. Craig unzipped his bag to get the lunch out and that’s all it took for the ponies to all descend on us like a group of zombies. One particularly cheeky pony kept sticking its head towards Craig’s, trying to grab a bite of his sandwich. Craig was getting so wound up as he was struggling to eat his lunch and no matter how many times he tried to push the pony away it just remained in the same spot, smiling and licking it’s lips. In the meantime I was in hysterics watching Craig getting all antsy and trying to say ‘no’ in different accents, hoping the pony would understand. It looked like the white ones might be the mums to the smaller, fluffier black one as we saw one of them feeding from a white pony. 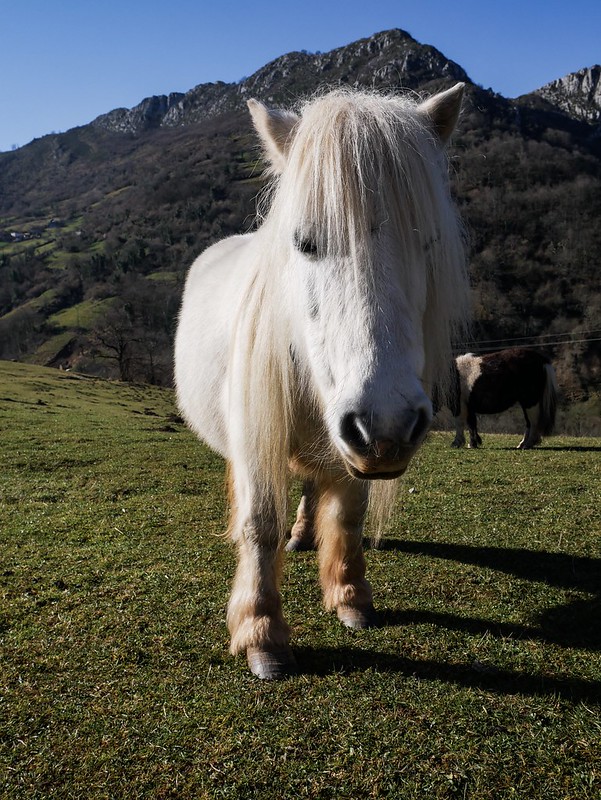 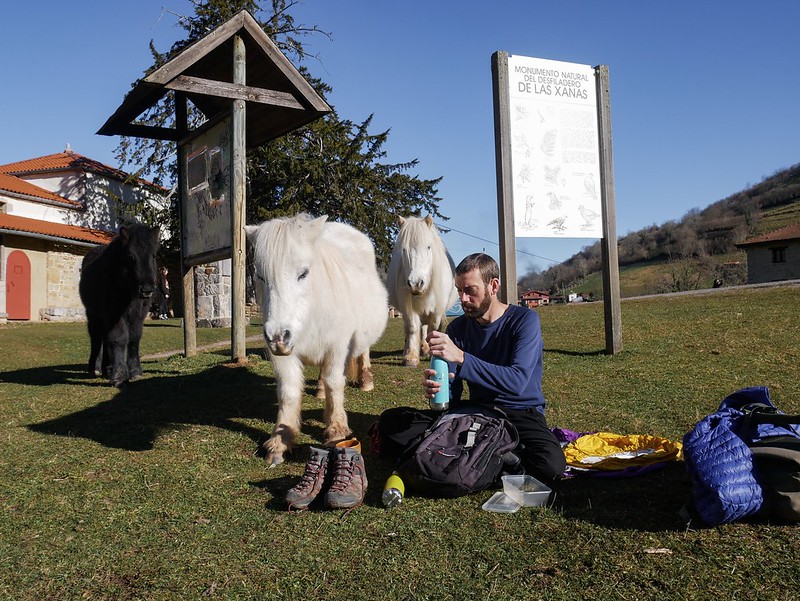 After lunch we set off down to the village of Pedroveya which had some fabulous traditional Asturias buildings. They’re made of wood and on stilts, they were and still are used as granaries to keep them away from the damp and rodents. They have an almost Asian look to them and sometimes they’re not on stilts but are plonked atop a house, creating a very unique second story. We’ve also seen people using them as a shelter to park their car under. These stilted houses were decorated with drying sweet corn, gigantic deer antlers and flower boxes hanging off the sides. We left one village for another and climbed up a hill to little Dosango. It had great views across the valley we’d just hiked through so we sat on a bench to enjoy the sight and get a little vitamin d. The route back however was quite a contrast as it remained in the shade and the grassy track was still covered in a crispy frost at 2pm. 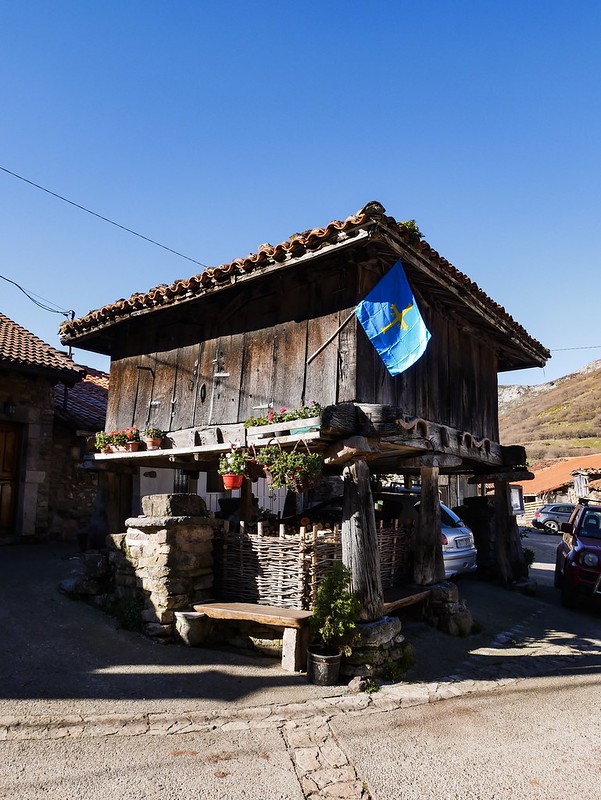 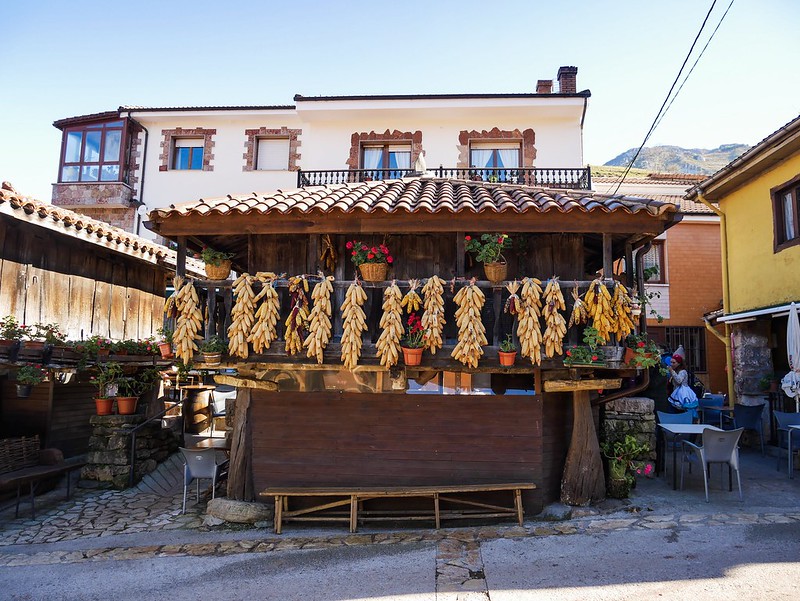 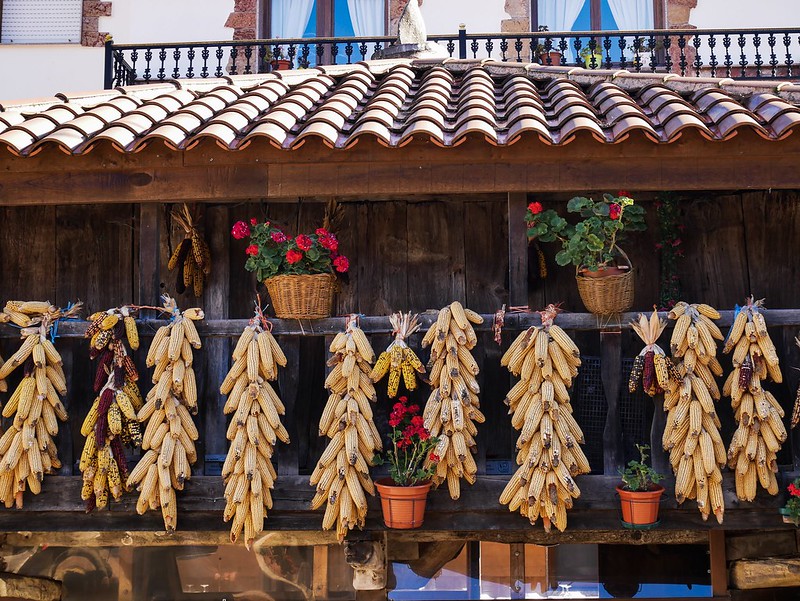 After the hike we did a little drive to try and lose even more altitude, hoping for a warmer night. We ended up in our least scenic camp spot in Spain, it was just a large recreation car park with a collection of litter around the entire edge of the parking area. We had a rare cloudy evening though and were treated to our best Spanish sunset so far. Fluorescent pink stripes filled the sky, it was fabulous but a bit of a shame we weren’t in a more scenic location to see it. 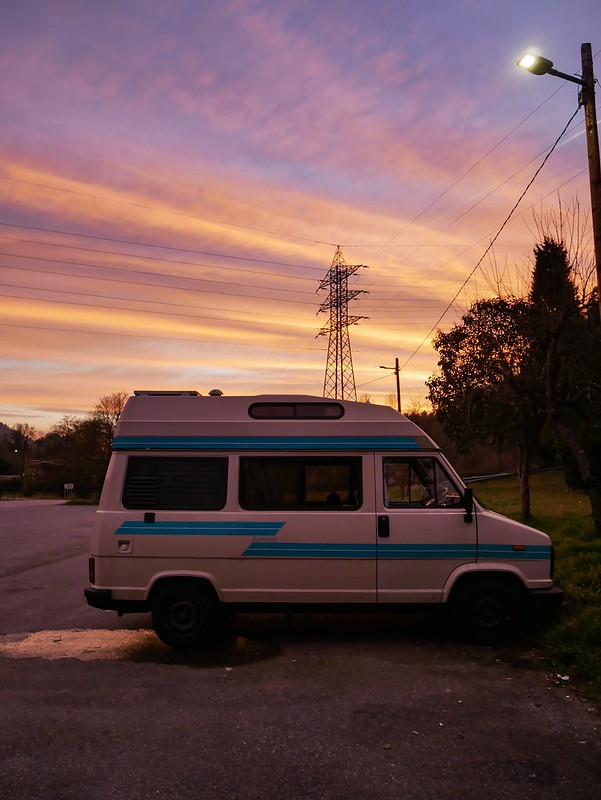 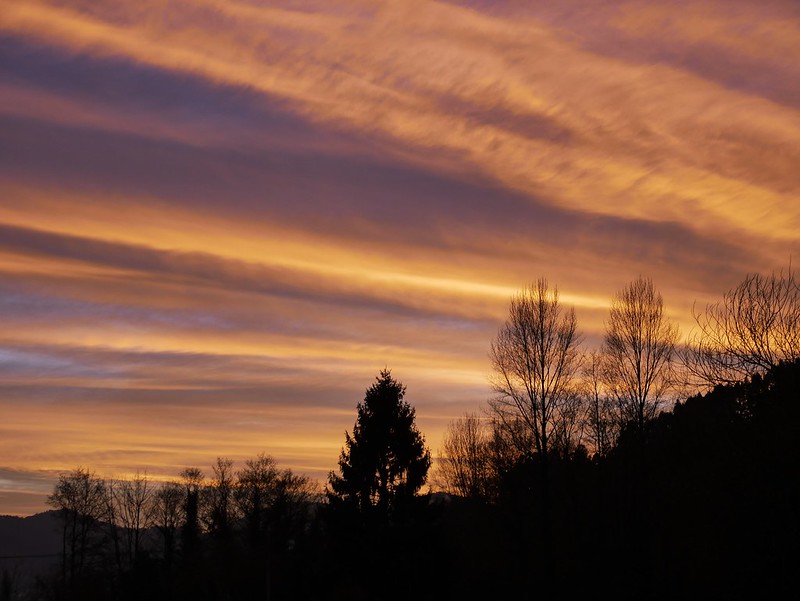 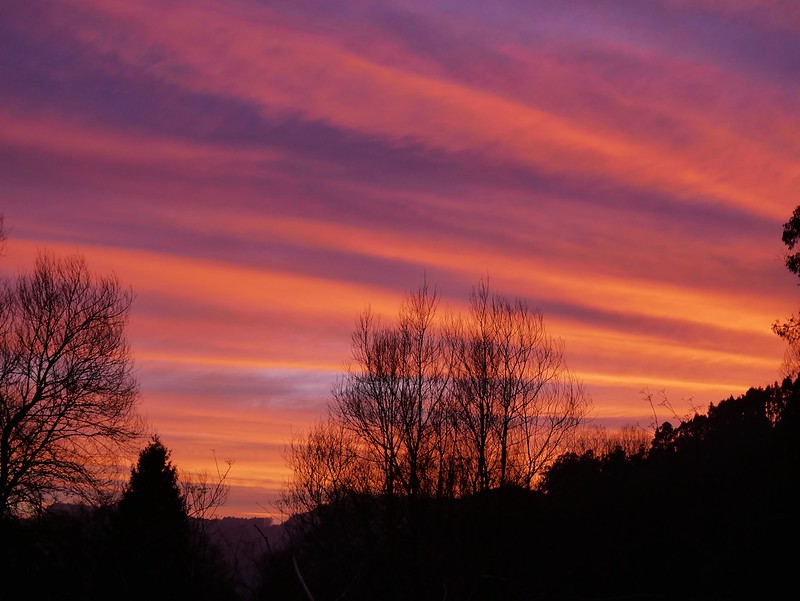 We had mixed emotions as we left the mountains and headed back to the coast, we much prefer being in the mountains but we need some time to just relax without the fear of our campervan freezing overnight. So today we started off with a drive down to Cudillero, a little fishing village built on a hillside. The buildings were mostly white and tall with colourful window frames and terracotta roofs. There was a large main square where restaurant seating would spill out in peak season but in January it was a ghost town. We wondered up steps and alleyways, through the maze-like labyrinth of lanes leading to the many houses. Some advertised accommodation in the windows and I imagined watching a posh couple trying to get their suitcases up the steps, what a nightmare. It didn’t take us long to see the village so we set off to a beach as we just wanted to park up and bask in the sun at long last. 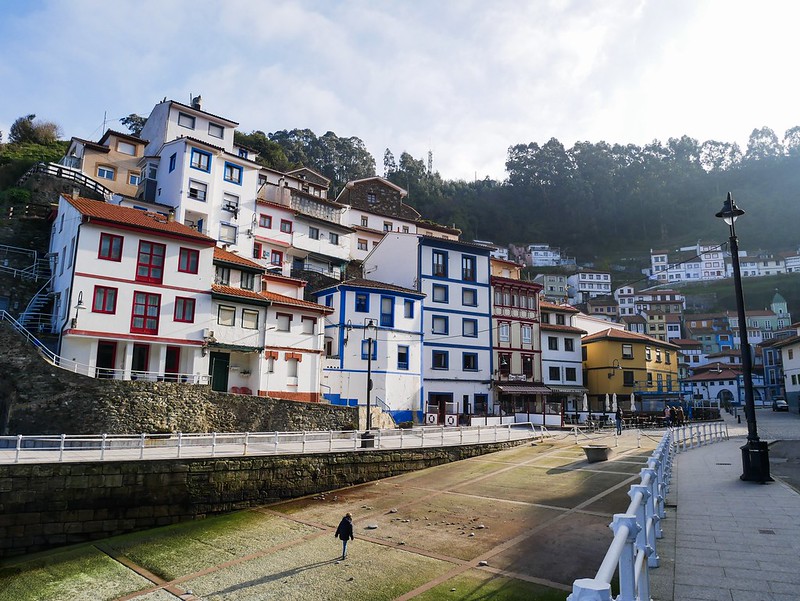 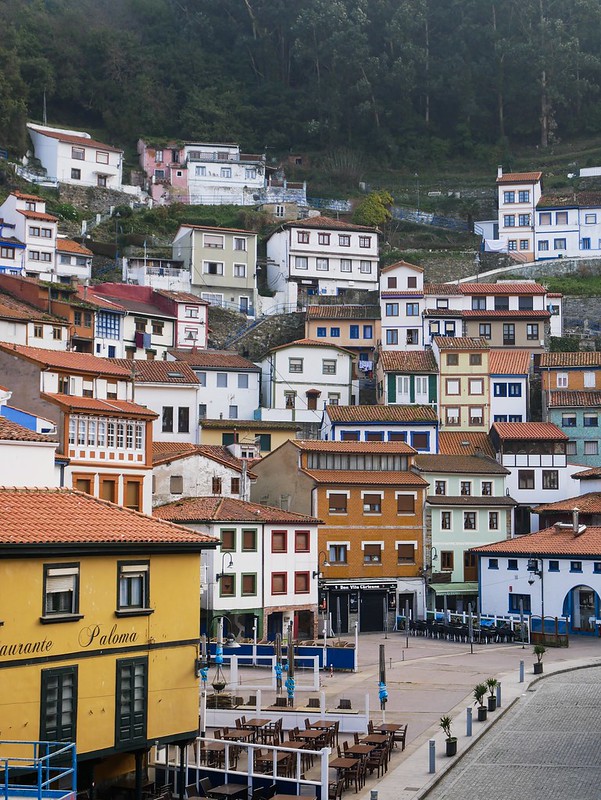 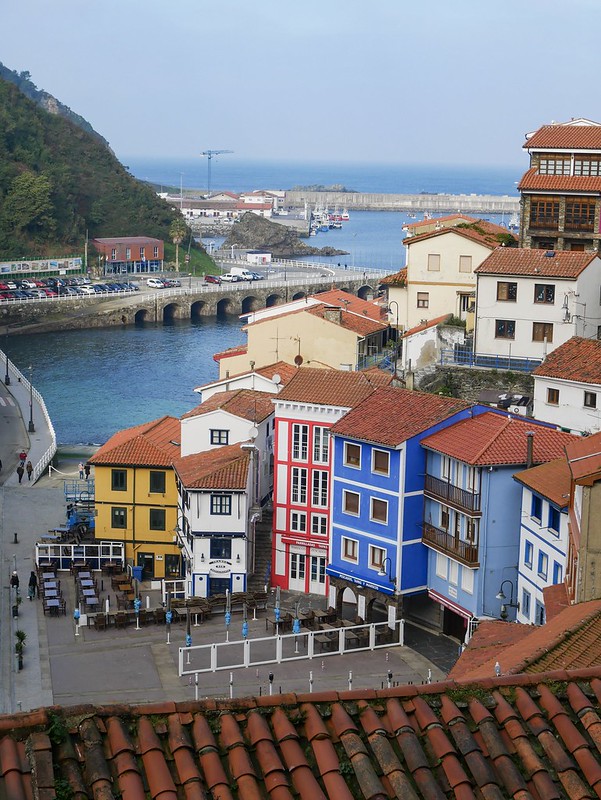 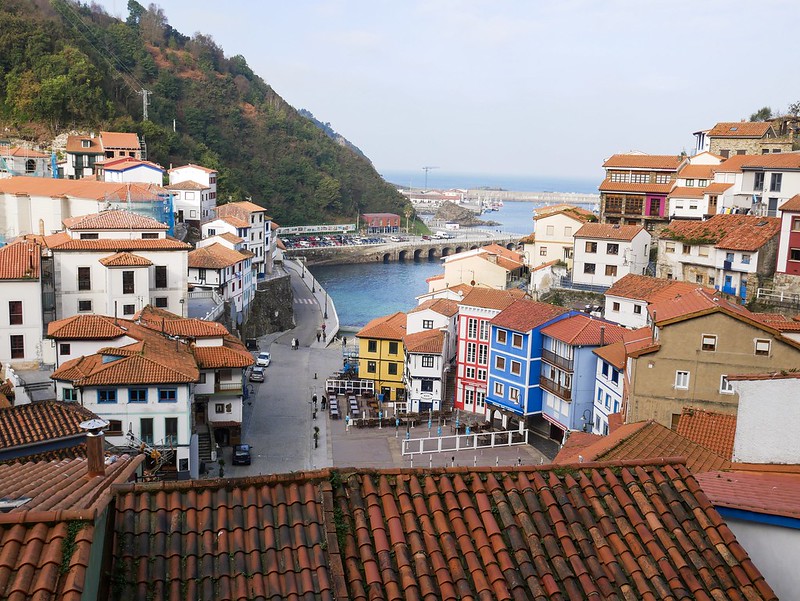 We drove further west to a little cove with a muddy car park. It had big cliffs on either side of the pebbly beach but before we relaxed we decided to go for a stroll. We followed a quiet road up to the little village of Cadavéu. There were some really interesting houses with quite a few grand Indianos mansions which seem to have been abandoned. They also had the typical Asturias raised granaries, a wooden structure built on chunky stilts to keep rodents away. But in this village the wooden structures weren’t standalone buildings, they seemed to form the second story to some houses. So the first floor was a normal concrete building and the second story was a slightly overhanging wooden structure with a terracotta tiled roof. It had a very Asian vibe to it which we loved. 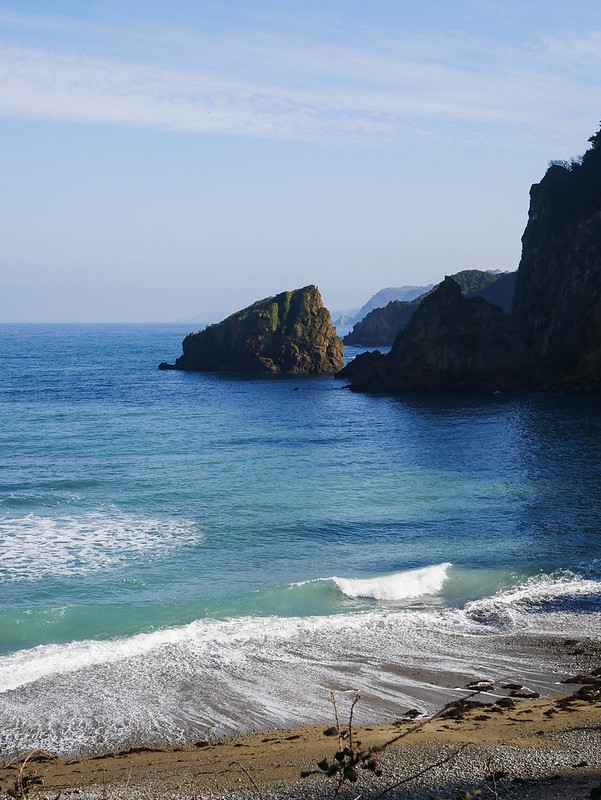 From the village, where some houses had robot lawn mowers making their way across the garden, we strolled towards the end of the headland where a little chapel sat. There were also two tradition wooden granaries with a dramatic view of the cliffs fading into the distance and we decided it was such a nice spot that we’d get Helga and park there for the rest of the day. It was a breezy afternoon but it felt delightful to have the warm sun hitting my face through the windscreen. 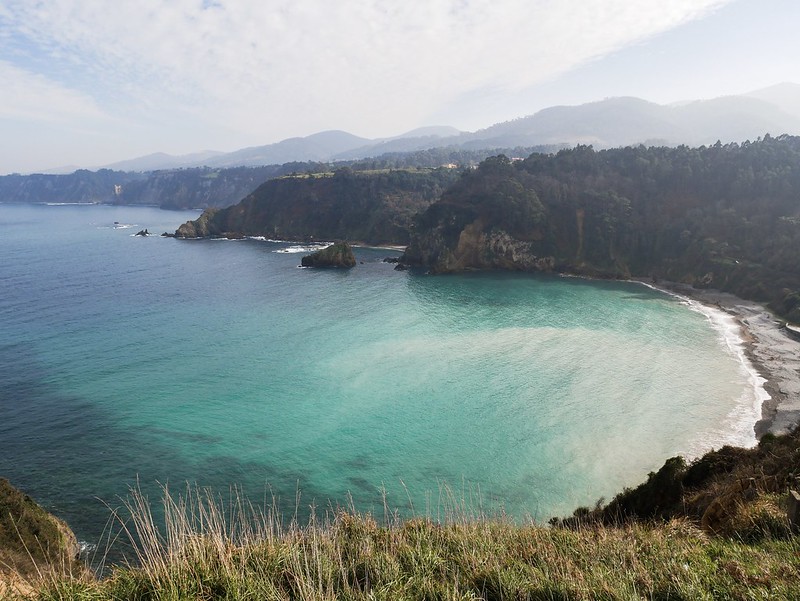 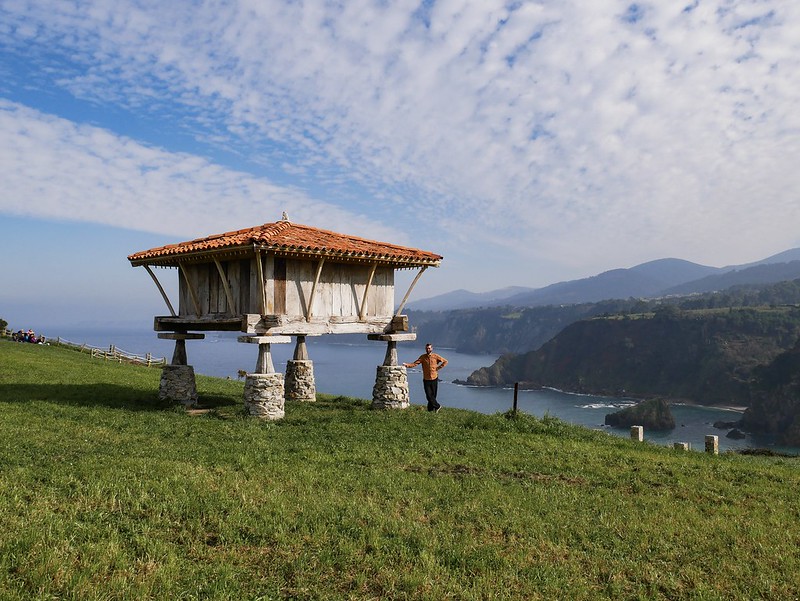 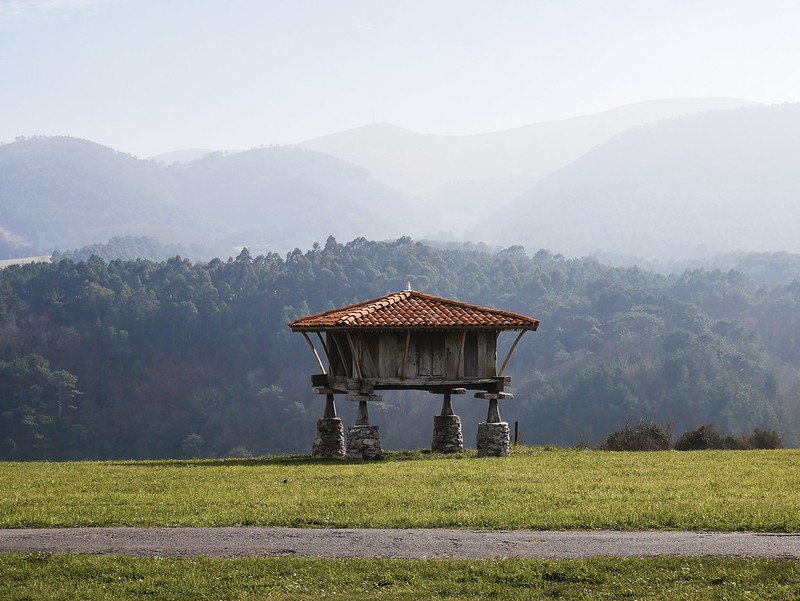 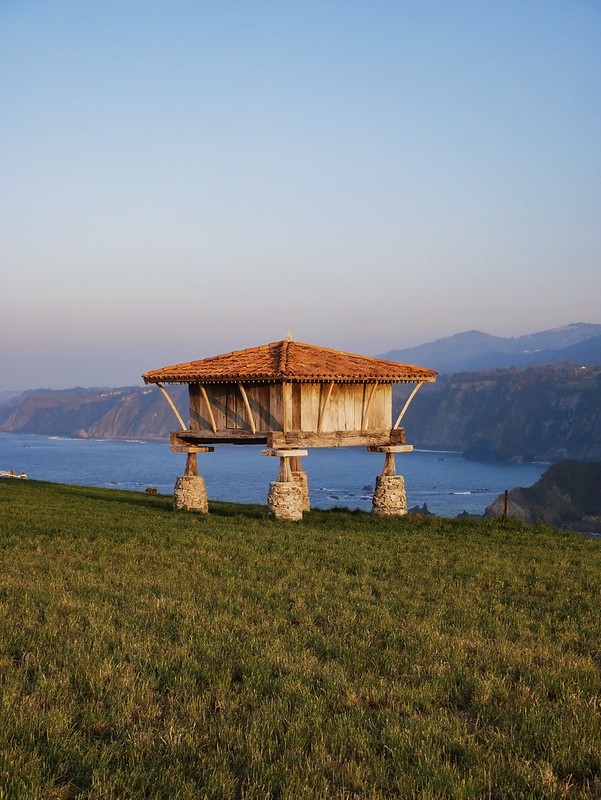