It was about -3° overnight and the condensation had all frozen on the inside of our windows but on the plus side we had crisp blue skies so we wasted no time and headed to Fuente De in Picos De Europa National Park for a gondola ride. The drive there was incredible with the jagged limestone peaks rising ahead of us. It was the last day the gondola will be open before it closes for winter maintenance, so on one side we were elated to time it perfectly but on the other hand the chances of a cable snapping or the brakes failing was at its highest. The return ticket cost €17 per person and because it’s the off season we were able to just turn up on the day and head straight up. 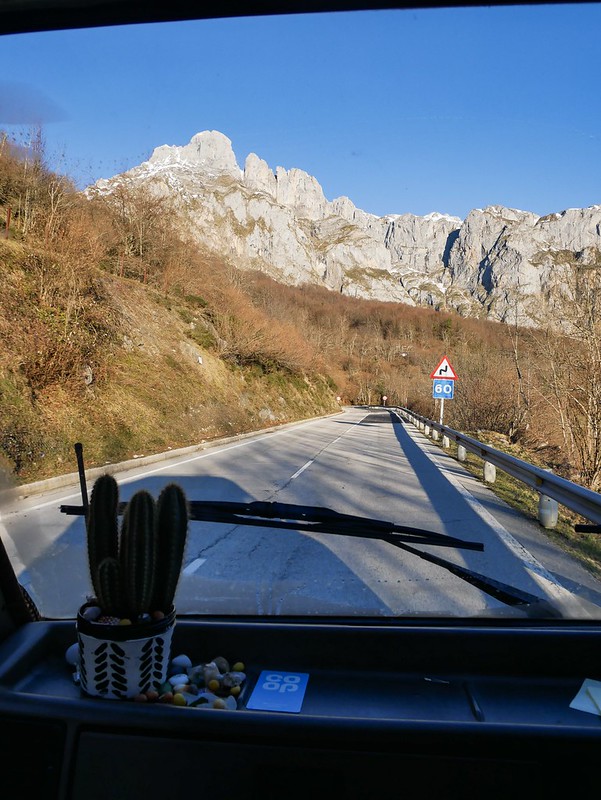 The gondola ascended 700m in just 4 minutes, it was like sitting on a birds back and being whisked up the mountain. The view was spectacular with a particularly pointy mountain rising out the valley like a sharks tooth. Towards the end of the ride it looked like we were going to head straight into the cliff wall, the shadow of our gondola was like a perfect picture in the sheer wall. After a bit of jiggling above the great abyss we anchored into the gondola station and were released. 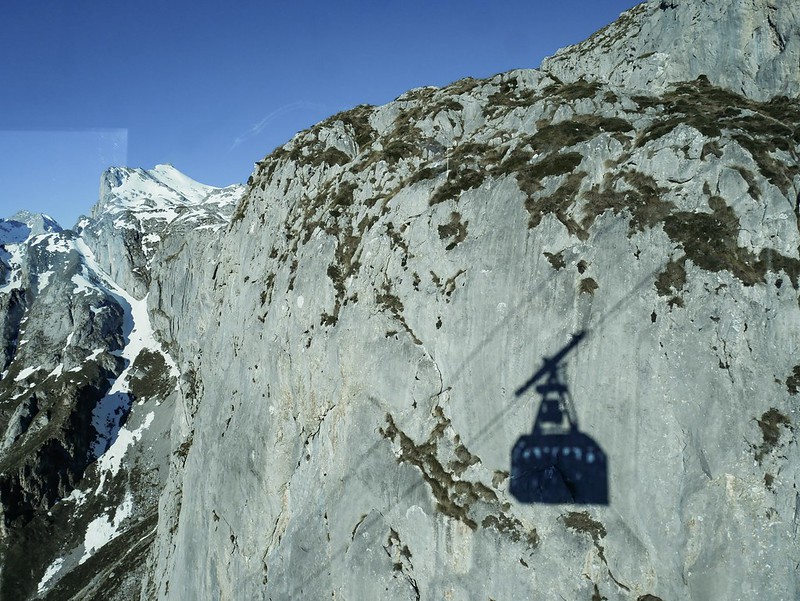 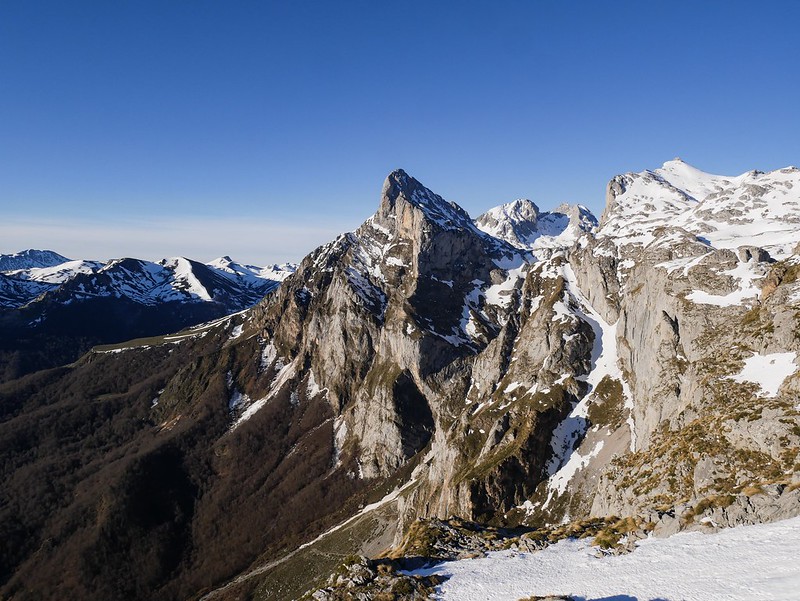 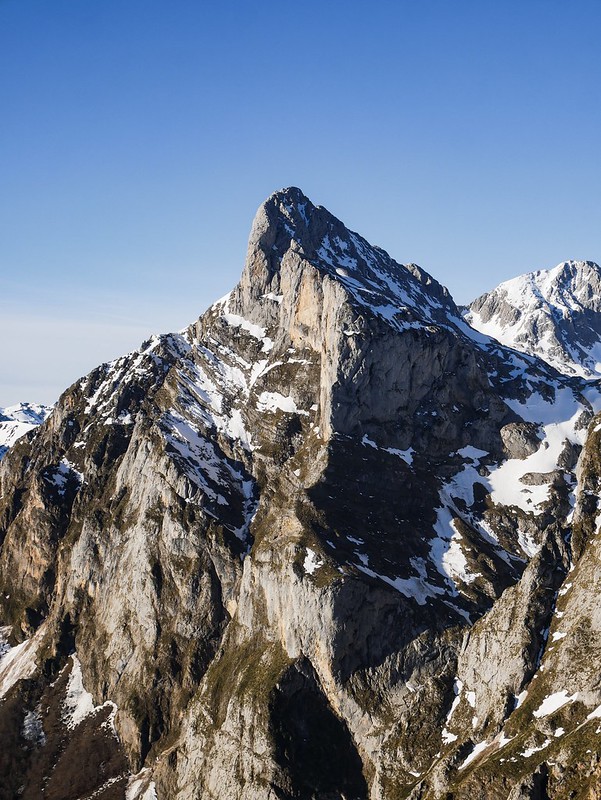 It was a pretty incredible view from the top, the valley dropped to our left and to our right was a winter wonderland. We were standing atop a sort of mountain plateau that was caked in 1-2 meters of snow with the craggy limestone towers rising around us in a big circle. I don’t think they’ve had any fresh snow for awhile as the ground was a solid sheet of ice. We felt rather ill prepared when everyone else arrived at the top with proper alpine gear and if they didn’t they visited the rental shop at the top to hire snow shoes, crampons or ice axes. I had Wellington boots on as I thought the snow would be soft and they would keep my feet dry…in reality I could of worn my hiking boots and ideally I would of pre-brought some spikes to put on my shoes whilst we were in England but alas, I guess I wasn’t expecting to walk on a plateau of ice in Spain. Luckily there were enough people ahead of us to make the route visible and more importantly rough up the ice with their crampons. The ice became more like grippy snow so we felt pretty safe. Our plans for a big loop hike were quickly aborted so instead we just headed in the direction of the 10 or so people ahead of us. I couldn’t help but feel sorry for the people that rented snowshoes as I absolutely despise them. We went snowshoeing in Norway and found them so awkward and clunky that we ended up removing them and continuing the walk through deep snow in our boots. 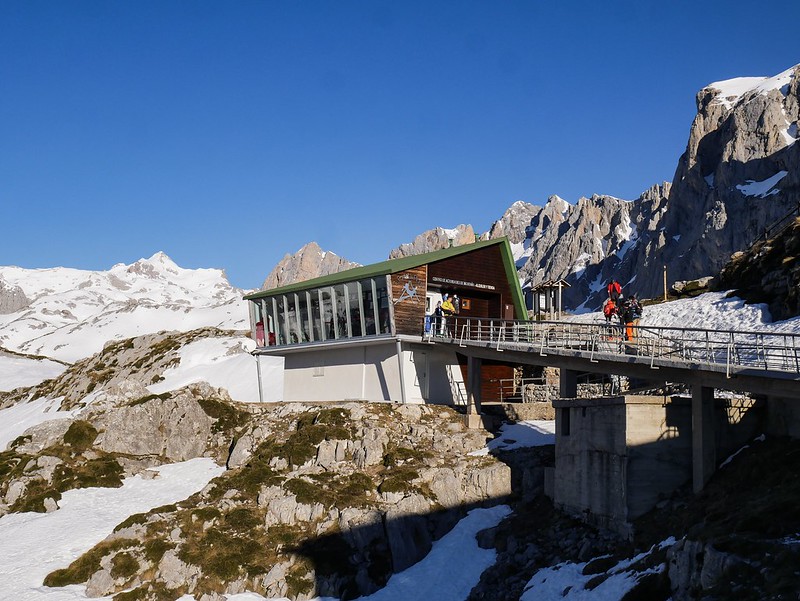 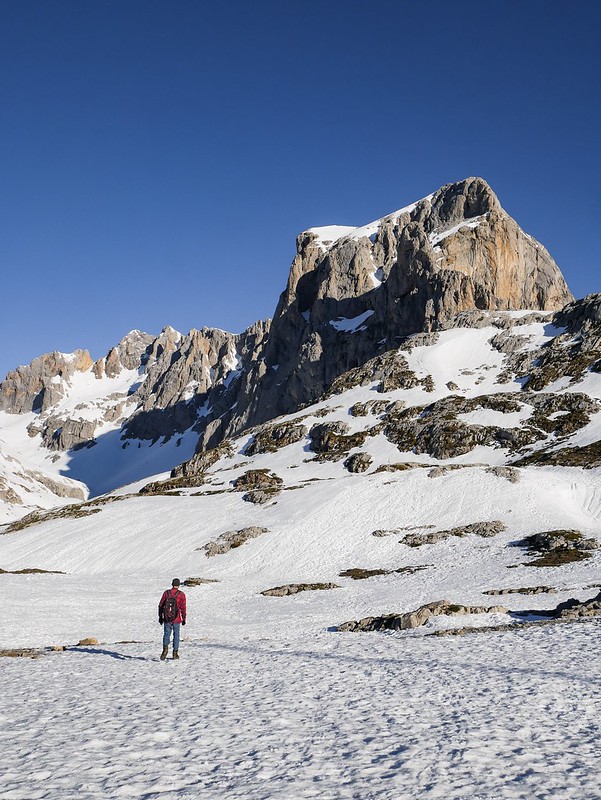 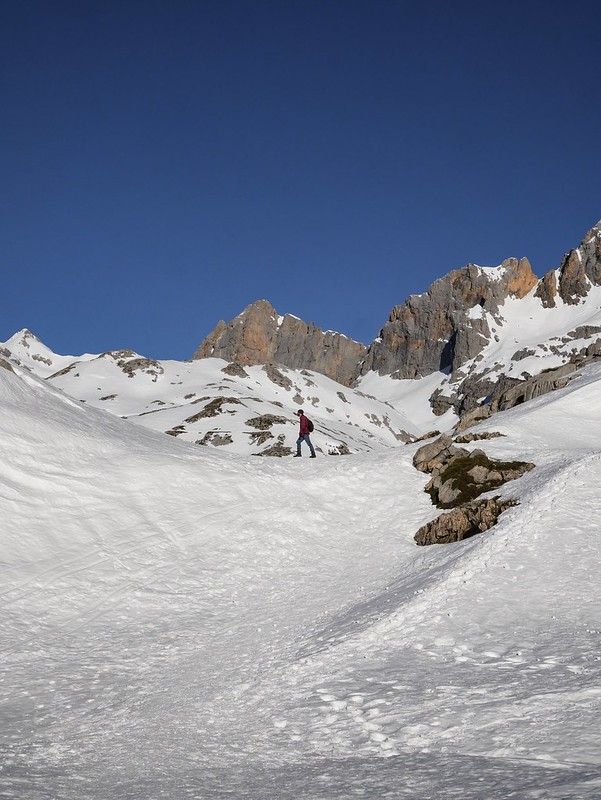 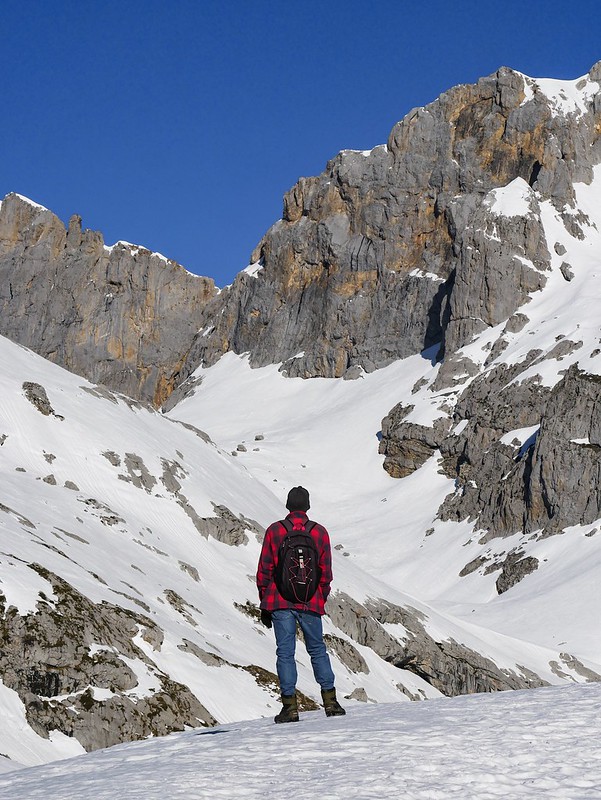 The route we were taking led us past some frozen lakes in a large amphitheatre encircled by jagged peaks. There were a few sections where we didn’t feel comfortable as a slip would lead us down to the lake and we’d struggle to get back up, so whenever that happened we just headed back a bit and found a more trodden path. We ended up making it pretty far up the snowy valley before we realised that was as far as our poor footwear would take us and we enjoyed our pack lunch with a wonderful view. We even managed to spot our first chamois, a species of goat-antelope who was running across the plateau, probably wondering where the heck all the grass was. 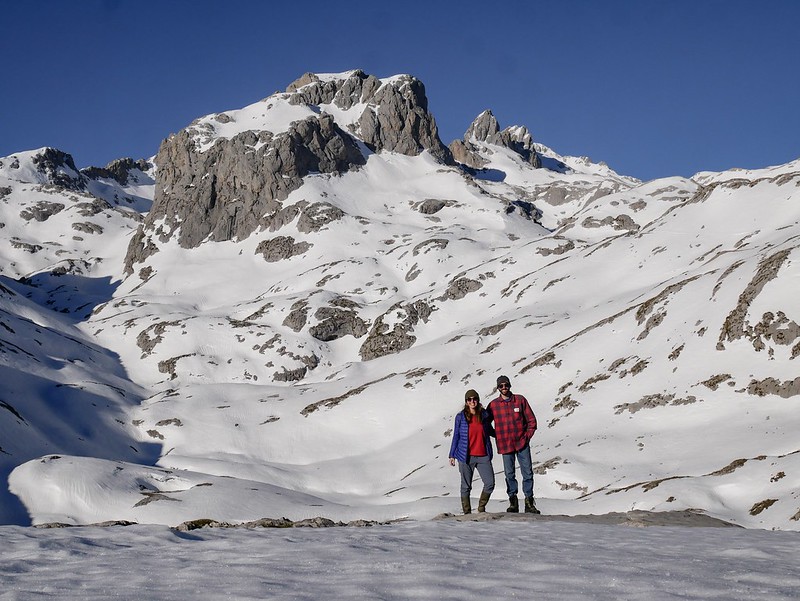 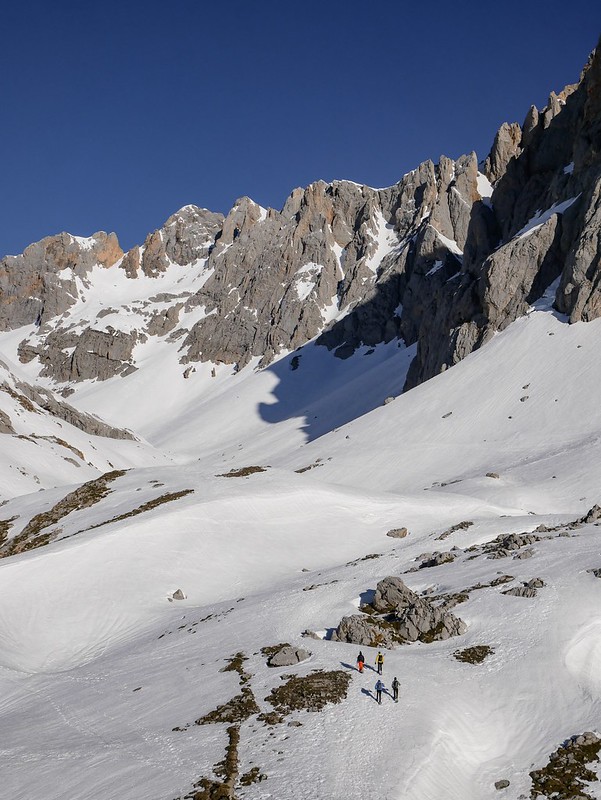 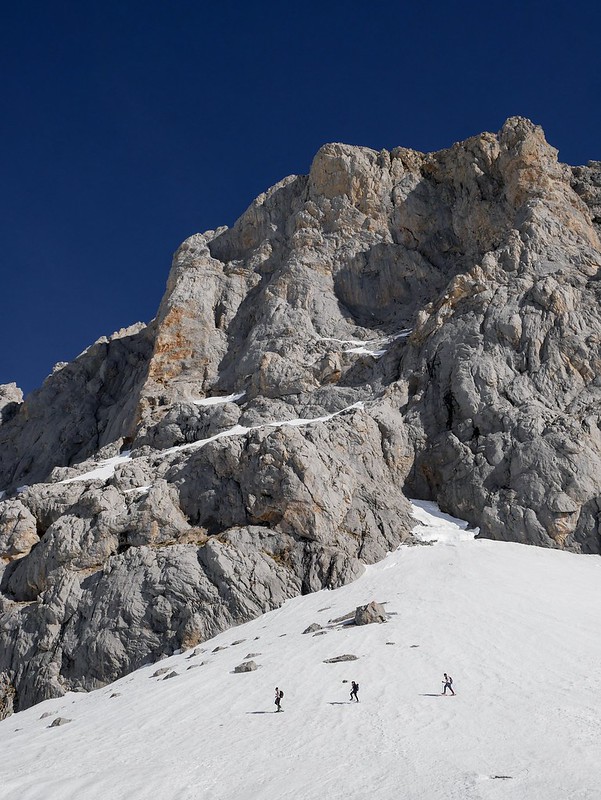 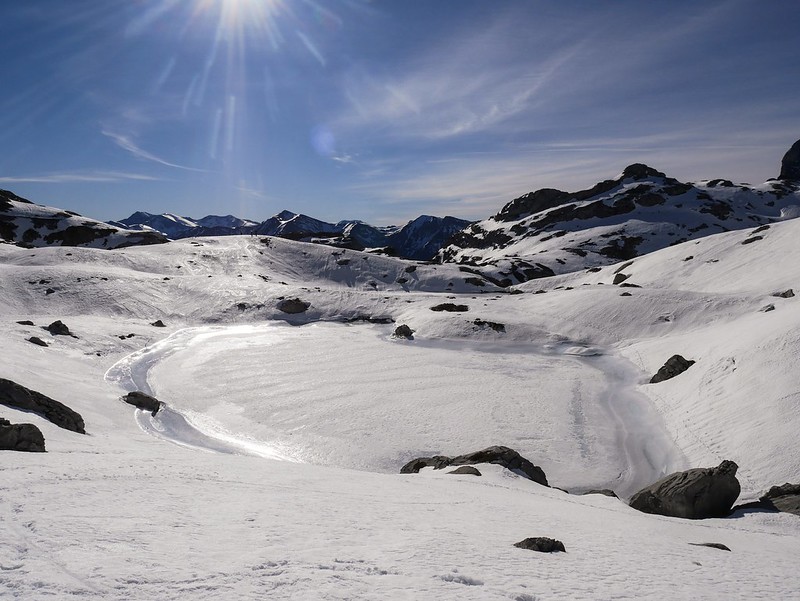 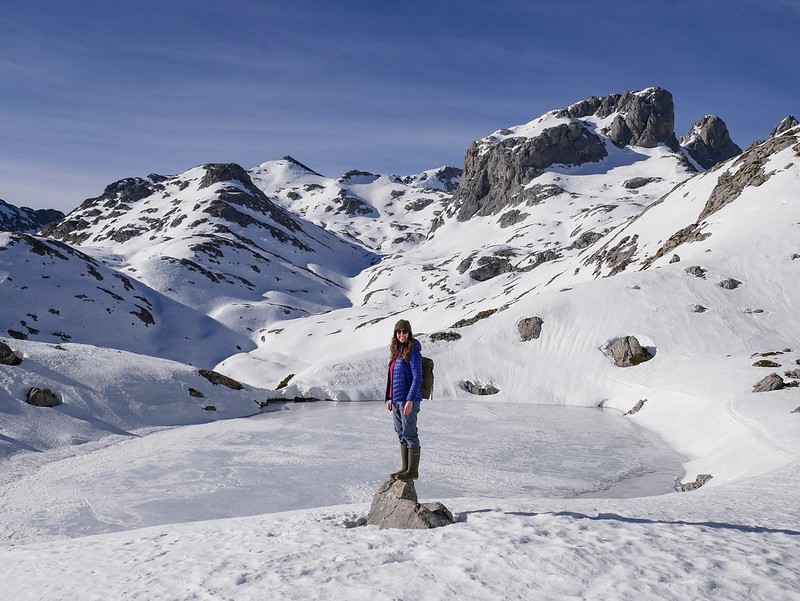 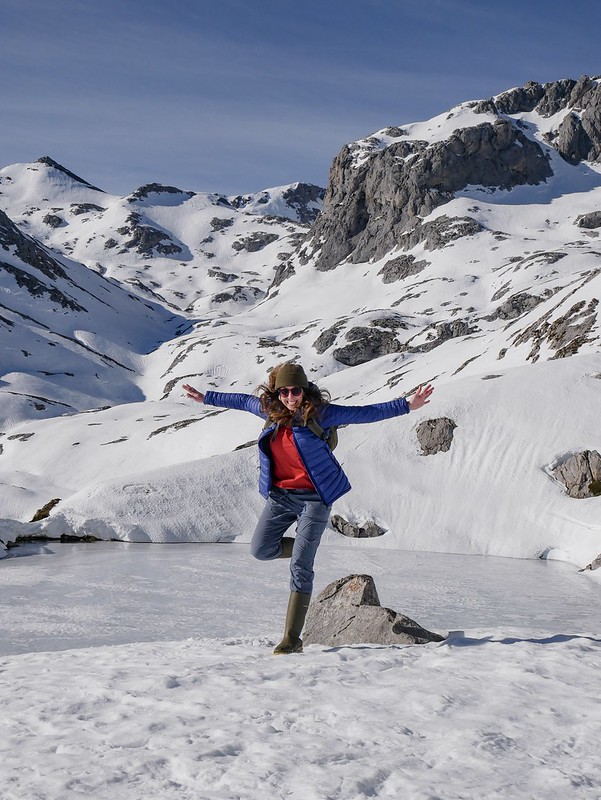 The scenery was incredible the whole time with the royal blue sky contrasting against the amber coloured towers and white snow. I was so relieved I thought to bring sunglasses as the sun glare was so strong I wouldn’t of been able to walk without them. We headed back to the top of the gondola station which was much busier now. This was the bad footwear zone where families played in the winter wonderland. Many kids had rented plastics sleds and it looked like a terrifying experience plummeting down a hill of lumpy ice. 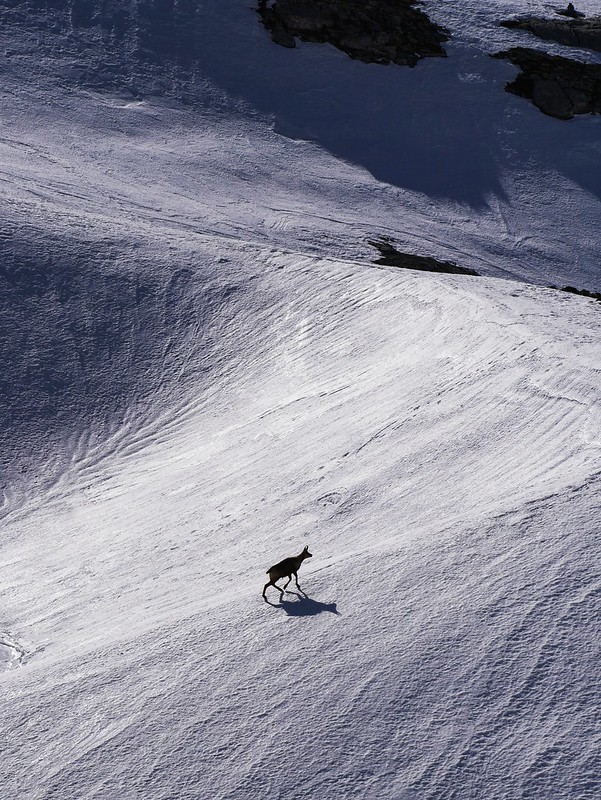 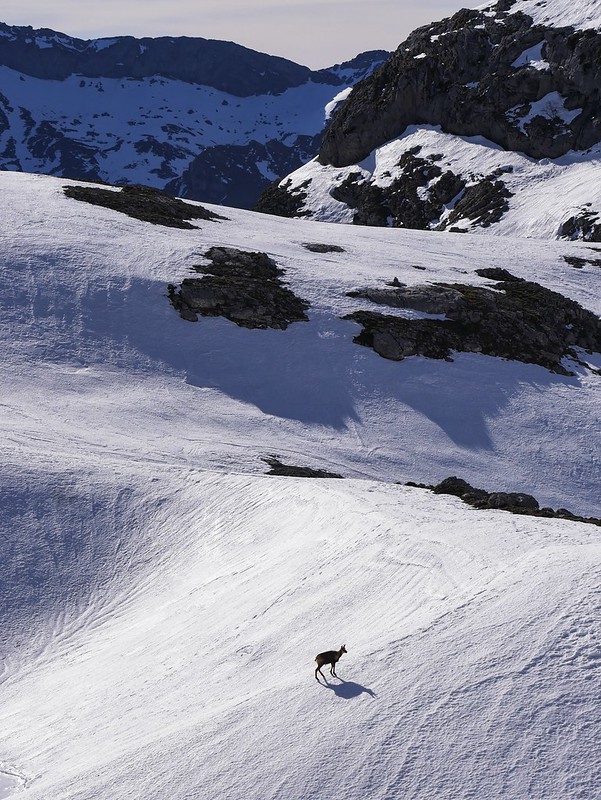 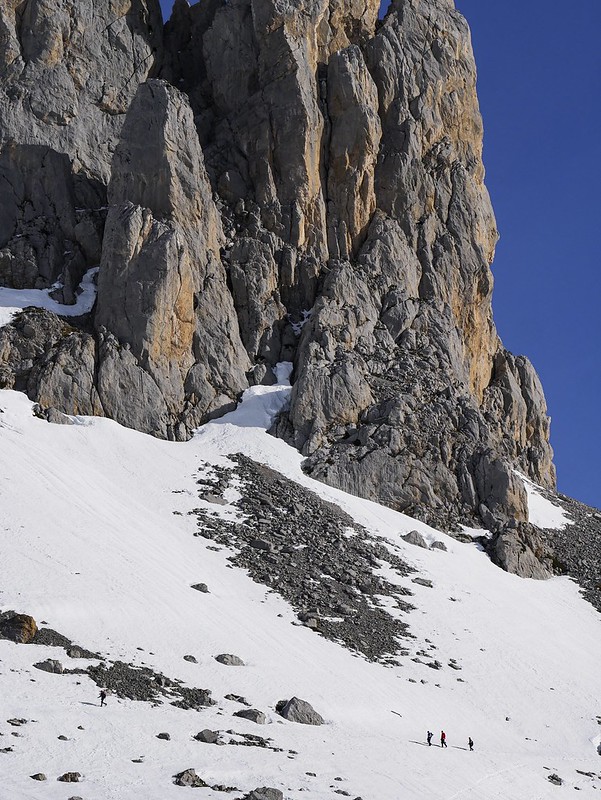 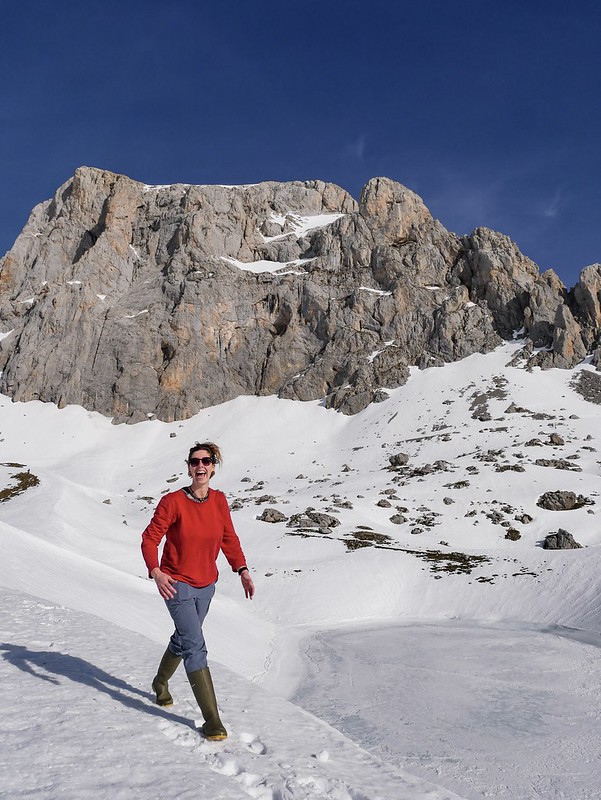 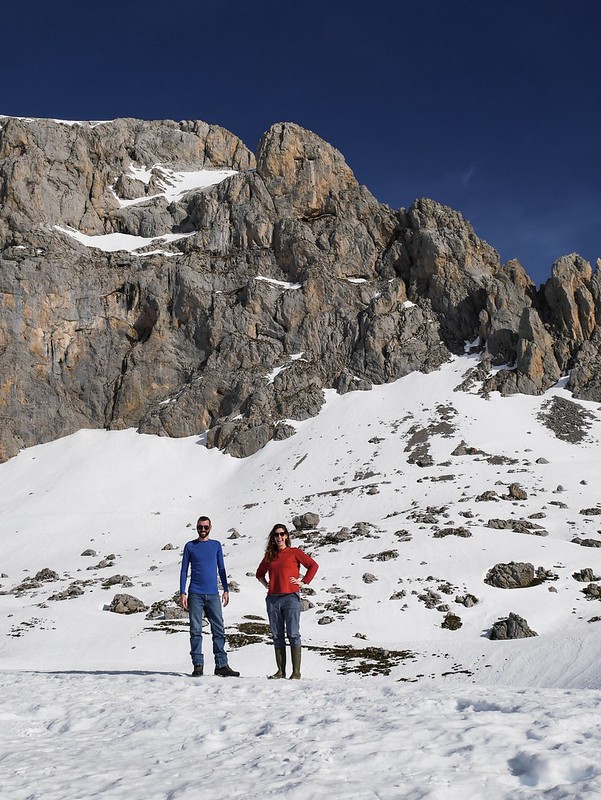 About a dozen vultures were circling around the valley below us and then rising up on the thermals. After doing a few rounds of loop-the-loops they headed back to their nests on the nearby peaks. We decided to venture across to the opposite side of the gondola and it offered us some fantastic views of the gondola station, clinging atop a sheer cliff. We kept commenting about features of this national park reminding us of other places in the world; the mountains have many similarities to the ones we witnessed in glacier national park, the towers look like Patagonia and the gondola station sat on the cliff reminded us of a modern day version of Meteora in Greece where monastery’s are built atop rocky pillars. 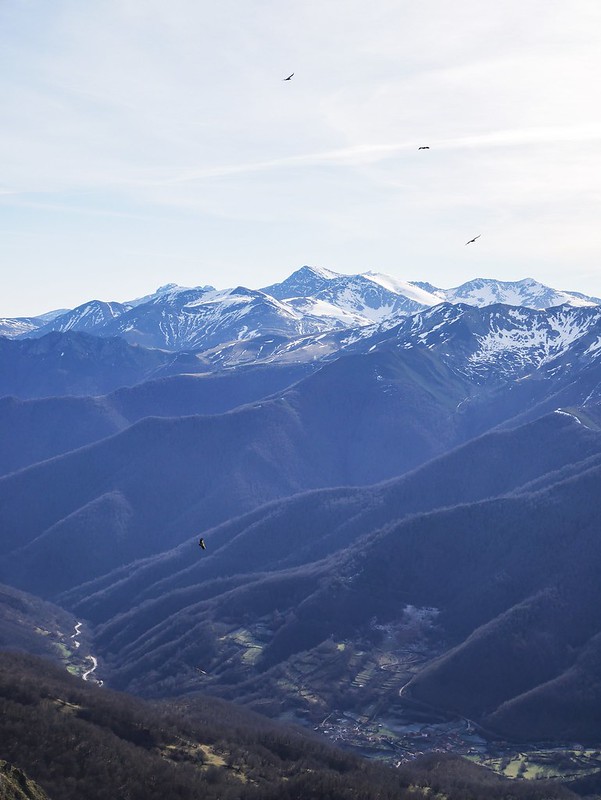 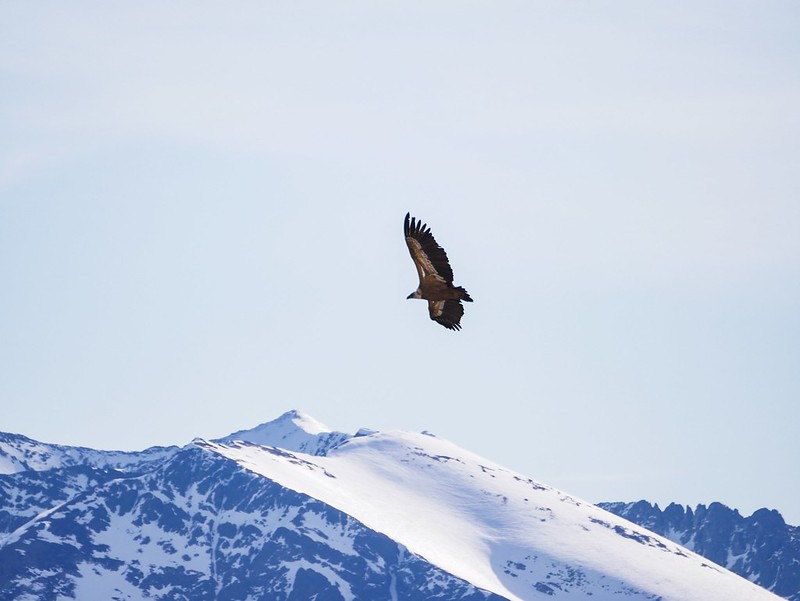 Around this quiet area of the plateau was a group of at least a dozen chamois, relaxing far away from the hustle and bustle. After being bitterly cold all morning the sun was finally thawing us and we couldn’t take the heat any longer so we had to hide behind a hut and remove our base layers. We ended up spending about 5 hours hiking around the snowy tops and then we made our way back down to Helga for a cup of tea. 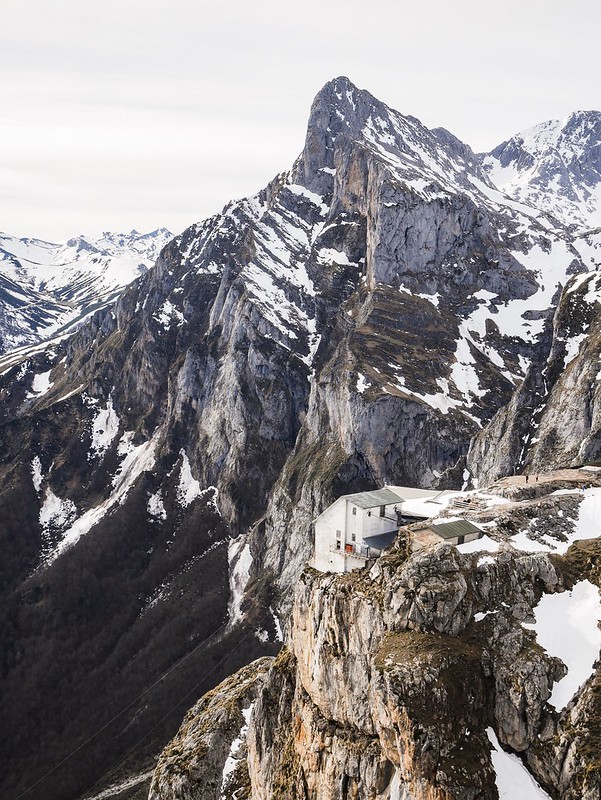 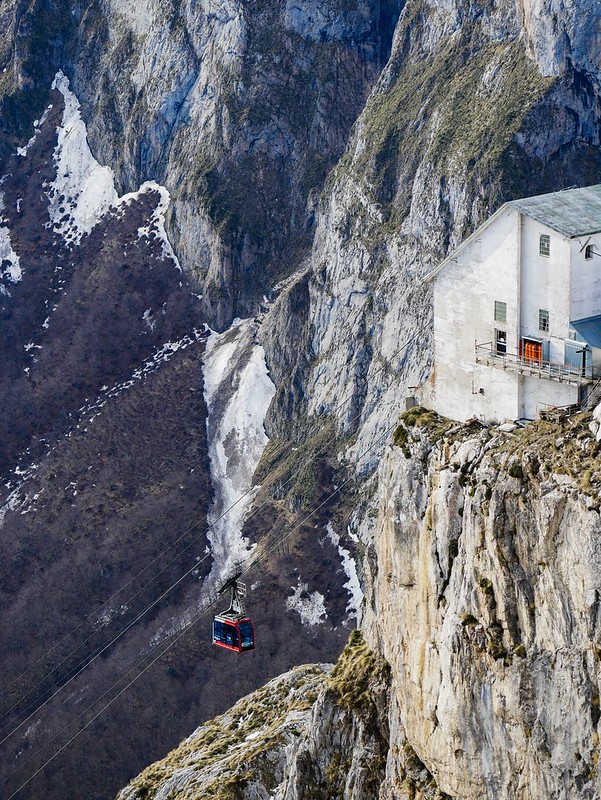 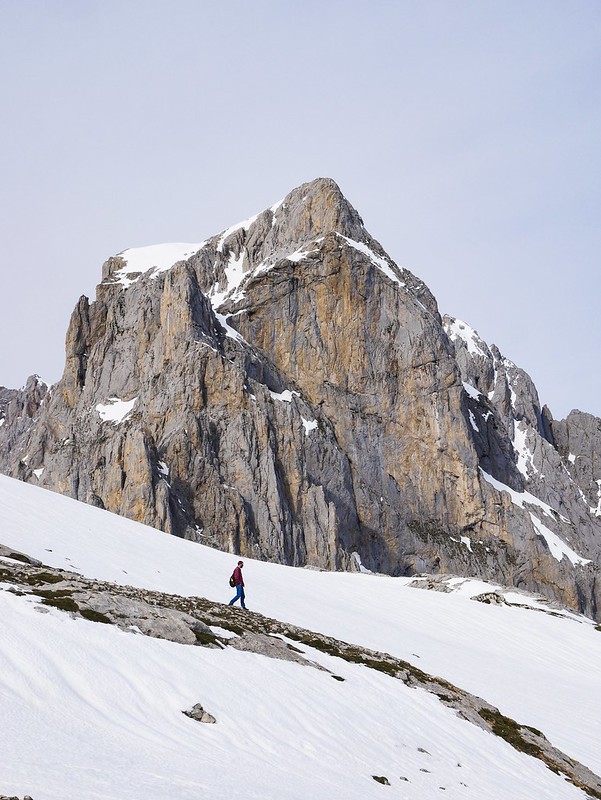 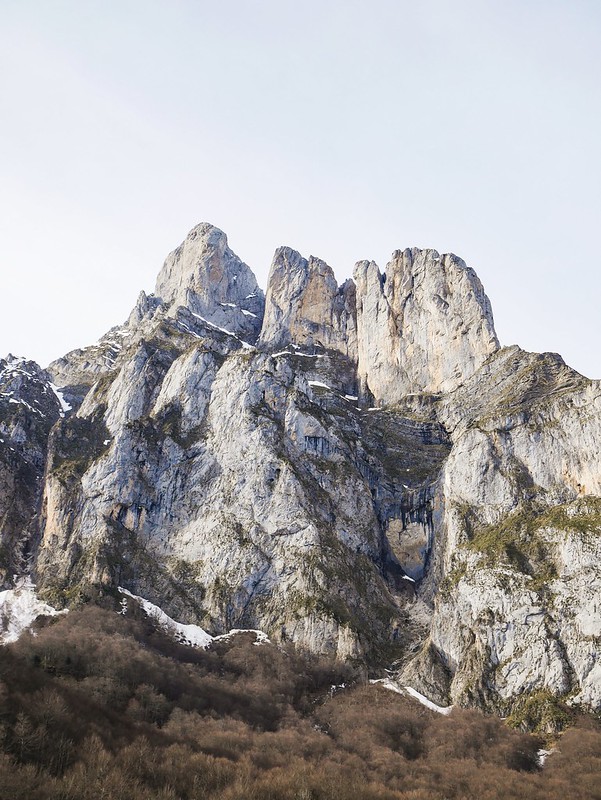 We ended up re-parking so we had a better view and after giving ourselves a quick clean with some baby wipes we put all of our warm layers back on, ready for another freezing cold night. 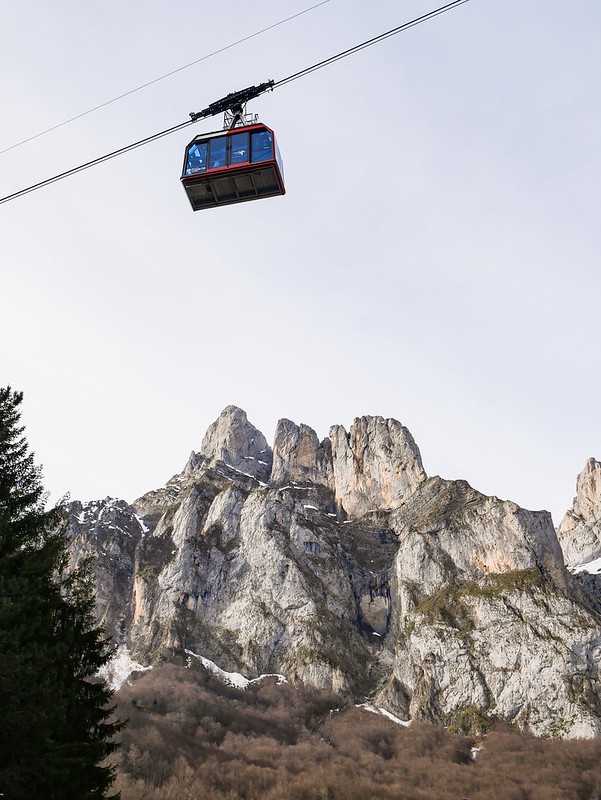 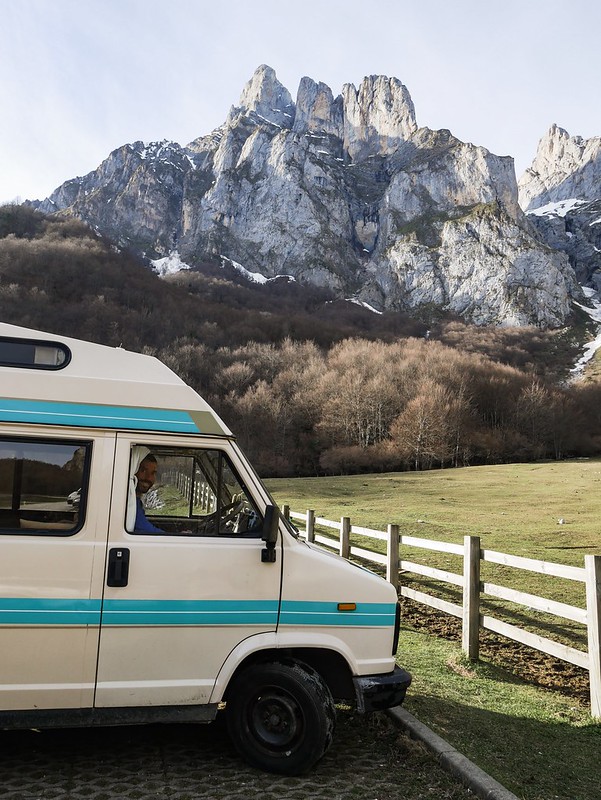 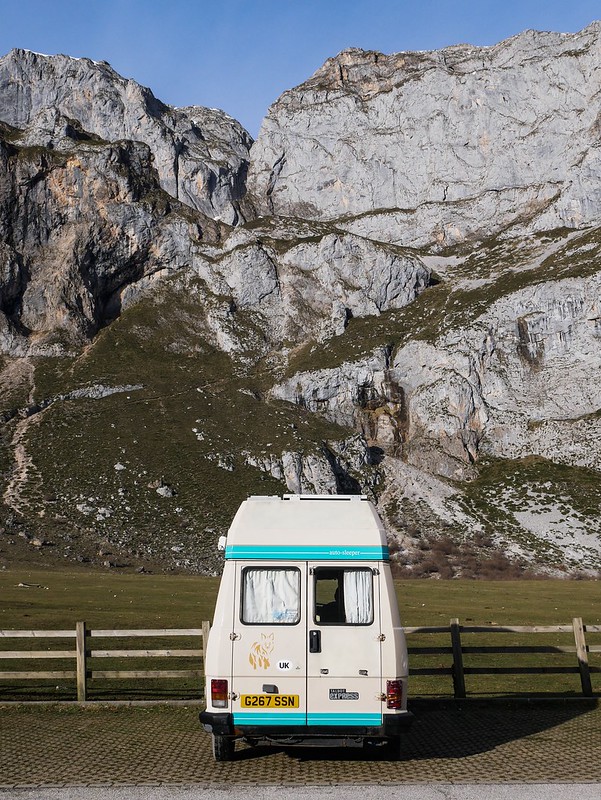 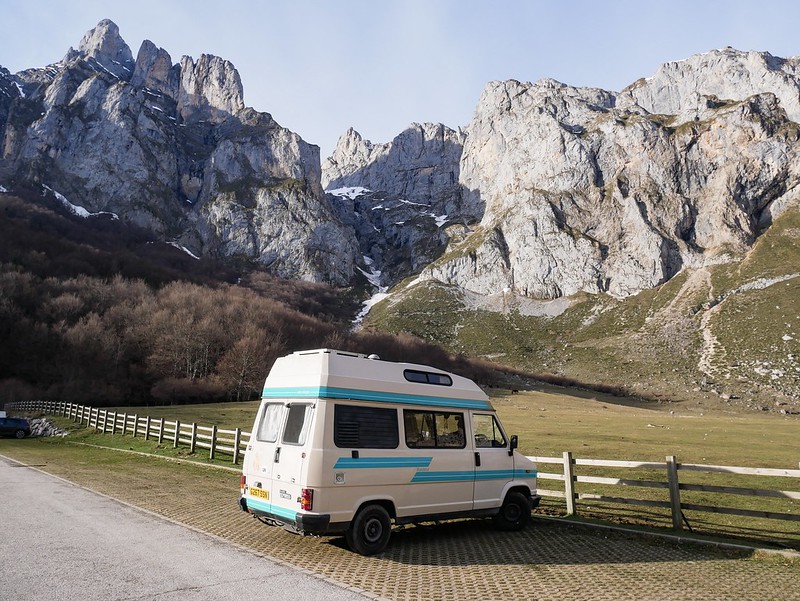