We arrived at Santander port in northern Spain just as the sun was rising behind the hills and reflecting on the calm sea. There were even snowy mountains in the distance which got us very excited. It was a beautiful morning but after passing through immigration we had to focus on how to drive in Europe. Driving on the opposite side of the road is hard enough, throw in a roundabout and boy does it become a stressful situation. We drove around each one a couple of times as we couldn’t figure out our exit and the old Sat Nav we brought along with us didn’t include any maps for Spain. So navigating is solely down to me and a free map app on my phone, which is what we normally use, I was just hoping for some extra help in Europe. Our first stop was to a huge Carrefour supermarket because let’s face it, we all love wondering around a foreign shop and grabbing some bargains. We had a bowl of porridge and some strong coffee in the rather empty car park before we went shopping and we also managed to pick up a Spanish sim in a Vodafone store. We were actually surprised how some things were more expensive than the UK, in fact a lot of things were, the exception was booze which they were practically giving away. I managed to get a bottle of gin for €3.90 and Craig got 6 beers for €1.70. We ended up taking ages to do the shop and by the time we got back to the car park it was almost full!

So now we had even more traffic to drive through and we joked that the fear of driving on the right was so strong that maybe we’d just spend the next three months parked up in Carrefour. We did finally leave and it didn’t take us long to exit Santander and get onto the highway heading west which was delightfully quiet. Our first sight I wanted to stop at was San Vincent de la Barquera, a small town set on the shores of a tranquil sea inlet. The inlet had a few beaches so we drove along a bridge to reach them and to get the best view of the town. From here we could see layers of mountains lined up behind the buildings. It was the peaks of Picos de Europa national park and it made such a beautiful picture. The sea was so calm and clear and a trail led all the way along the shores to another beach which was more open to the elements. It was still nice and calm but it just had some small waves, rolling perfectly towards the shore and pleasing the wetsuit-clad surfers. 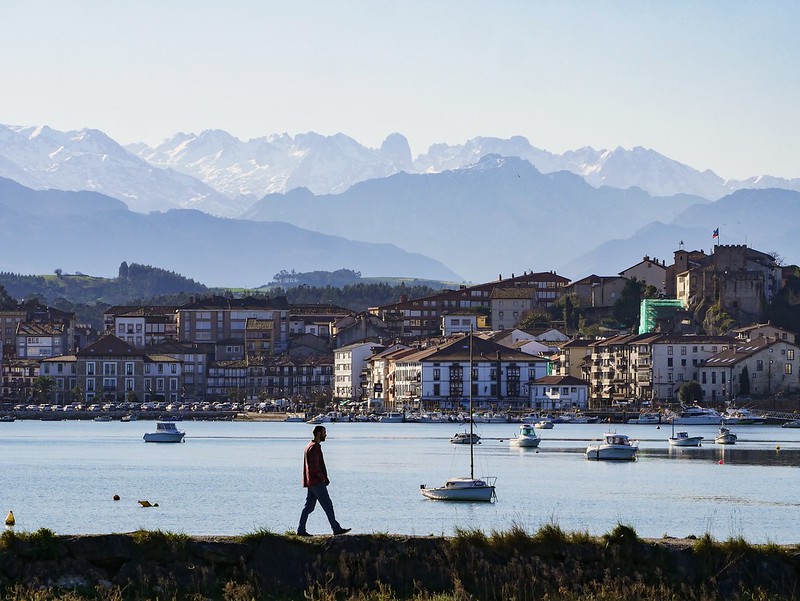 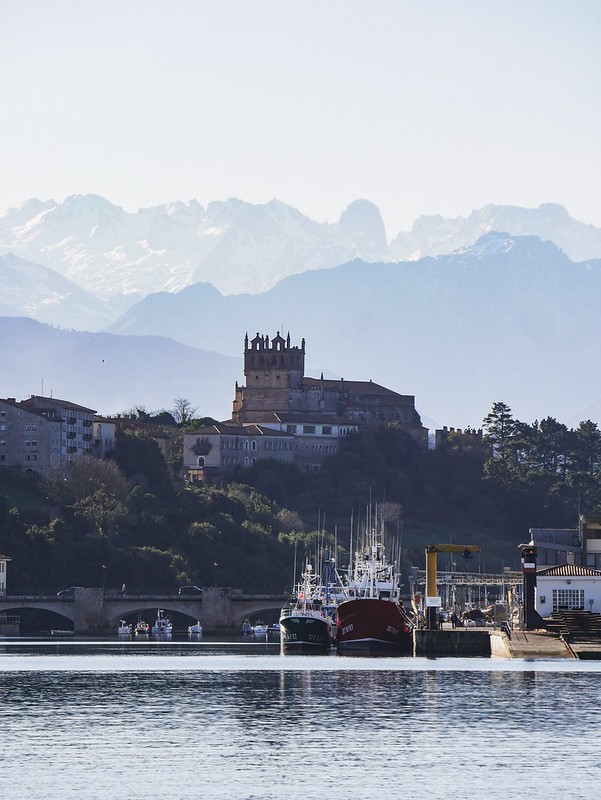 We ended up retreating back to the first beach as it was totally sheltered from the sea breeze and it actually felt delightfully warm in the sun. So of course we decided to go for a swim. It was so much colder than I expected but I tried to force myself to stay in and get used to it, which I did but it still felt pretty damn good to get out and warm up in the sun. We had a cup of tea back in Helga with the side door open and the sun piercing in and keeping us wonderfully warm. After admiring the view for a little longer we decided we should make a move and head towards the mountains that we’d been staring at. Before we left I made a dozen phone calls to visitor centres trying to find an English speaker for some questions about accessing the national park during winter. It’s a good job I did as the Teleferico (basically a gondola) was only open for one more days before it shut for a couple of weeks maintenance. So it was decided that we’d make our way towards Fuente De where the gondola was. The drive towards Picos De Europa National Park was spectacular. It started with a wiggly road leading through a deep gorge with absurdly tall walls and an emerald river beside us. 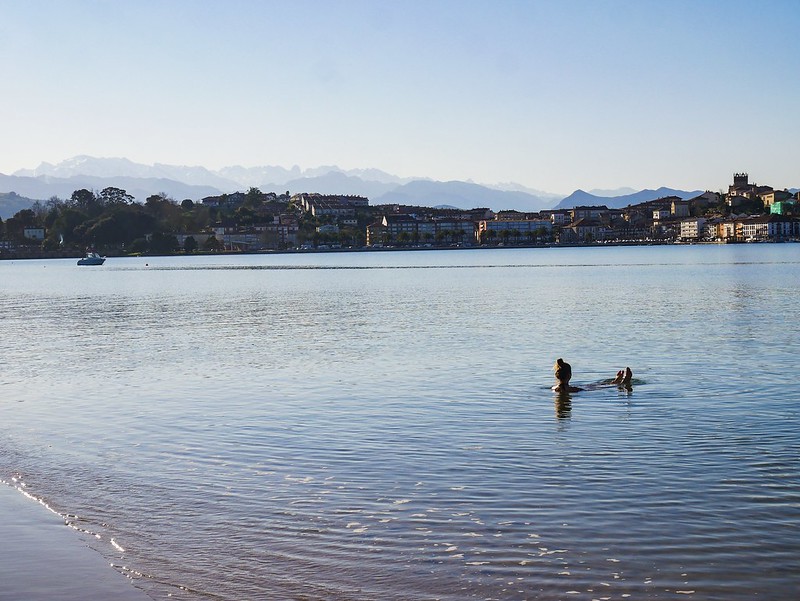 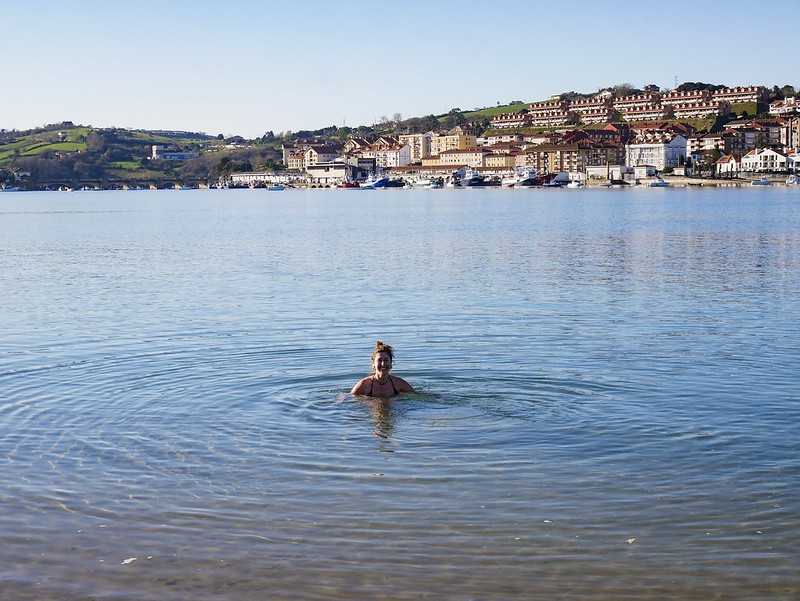 As the gorge opened up the snow capped mountains appeared and they looked incredible! With every twist and turn of the road, more mountains became visible and we felt pretty damn happy to be there. The grassy verges beside the road soon became coated in a thin layer of snow which I suspect fell a long time ago but it hadn’t become warm enough for it to melt. We pulled over just as the sun was about to vanish and the last few centimetres of the mountains were glowing red. As soon as the sun left us the temperature plummeted. Just over an hour ago we were swimming in the sea and I looked very underdressed in flip flops and dungarees while a couple of lads stood outside their vehicle in full alpine gear. We found a lovely spot to camp up the road where we had a view of rolling hills, the pink hued sky and the full moon. The parking area had a water tap, bins and picnic tables, already Spain is putting the UK and Ireland to shame because they were so poorly set up with rest stops and facilities. I think we’re going to really enjoy our time in this beautiful country. 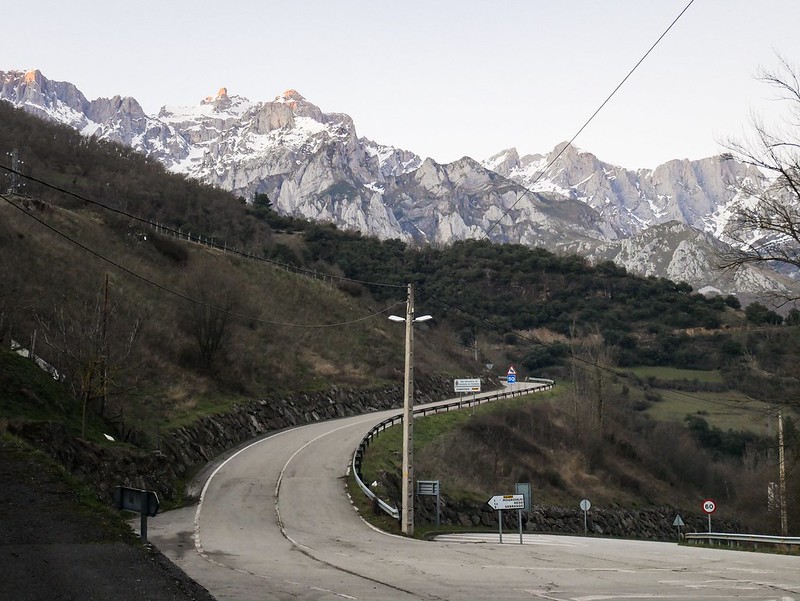