We were really happy to be in County Kerry as it’s home to Ireland’s highest mountains. But before we hiked them we had plans to explore the Dingle Peninsular so we made our way south west. As we passed through the market town of Listowel we had to pull over because the buildings were so colourful. It was a Sunday so we had free parking and we enjoyed a stroll past all the beautiful shopfronts. I just love the colourful towns on the west coast, they have a lovely style to them with plenty of bright paint and a lovely font for the shop sign. We slept in a peaceful spot by the sea and woke early the next day for a hike up Mount Brandon. 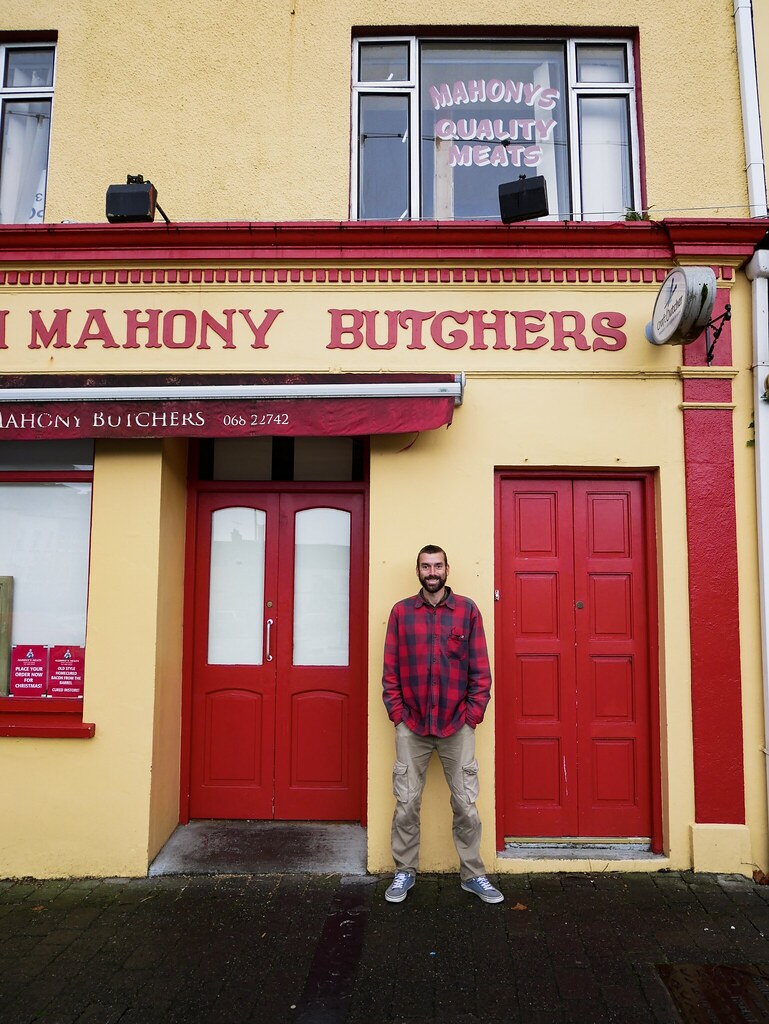 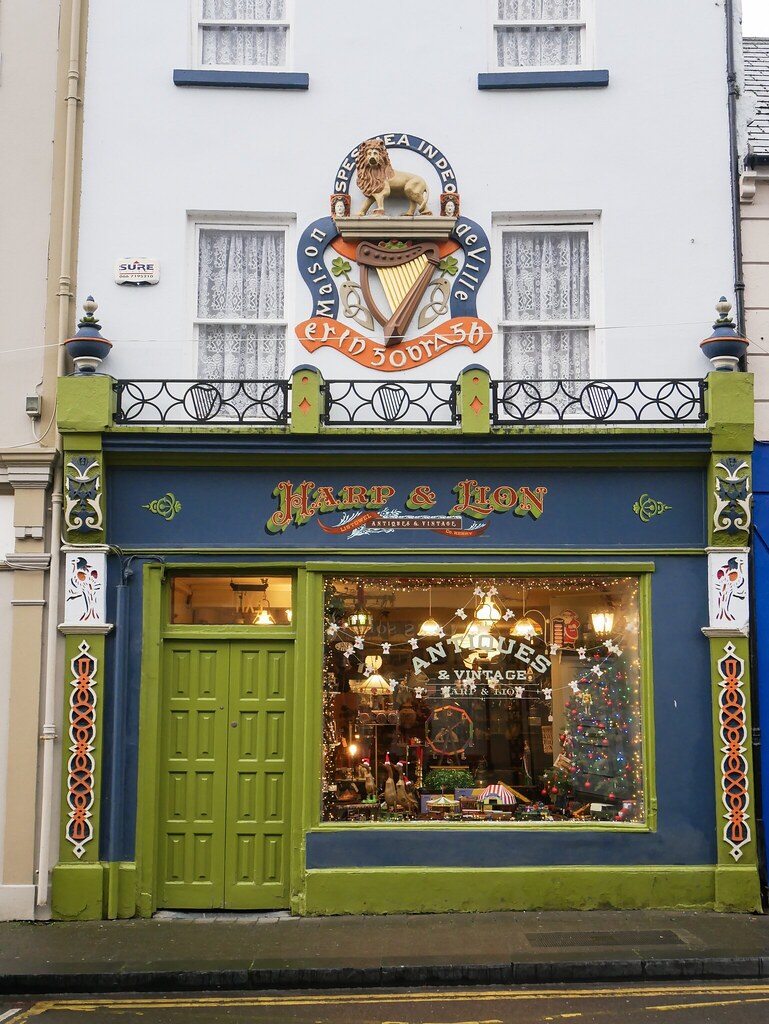 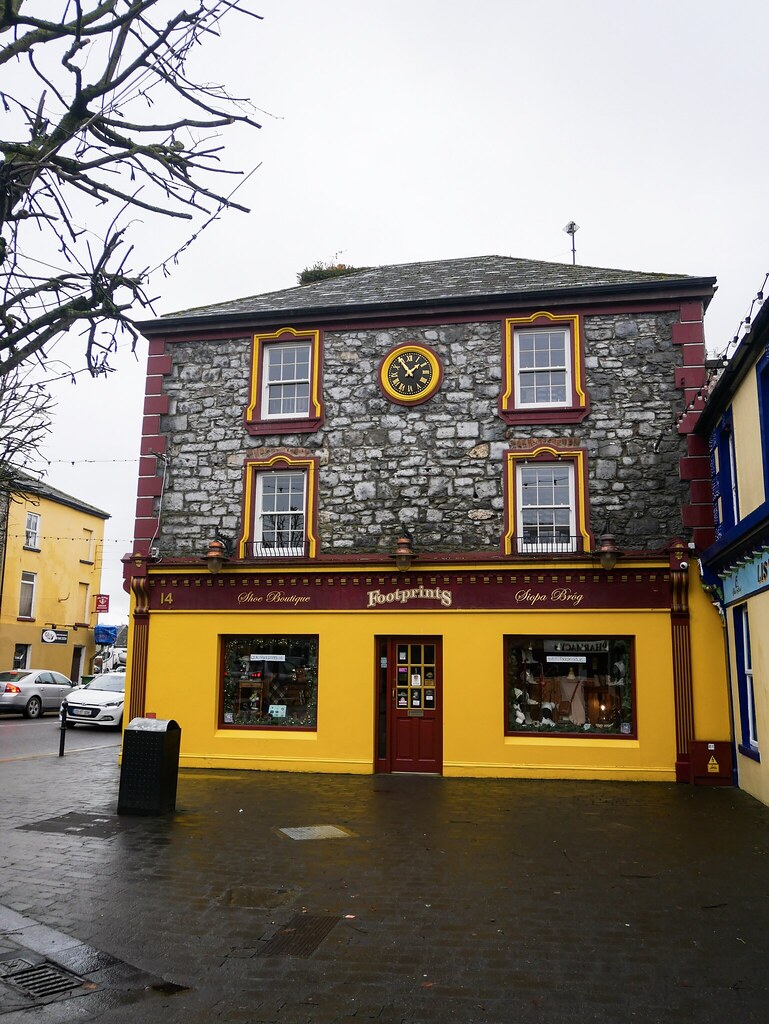 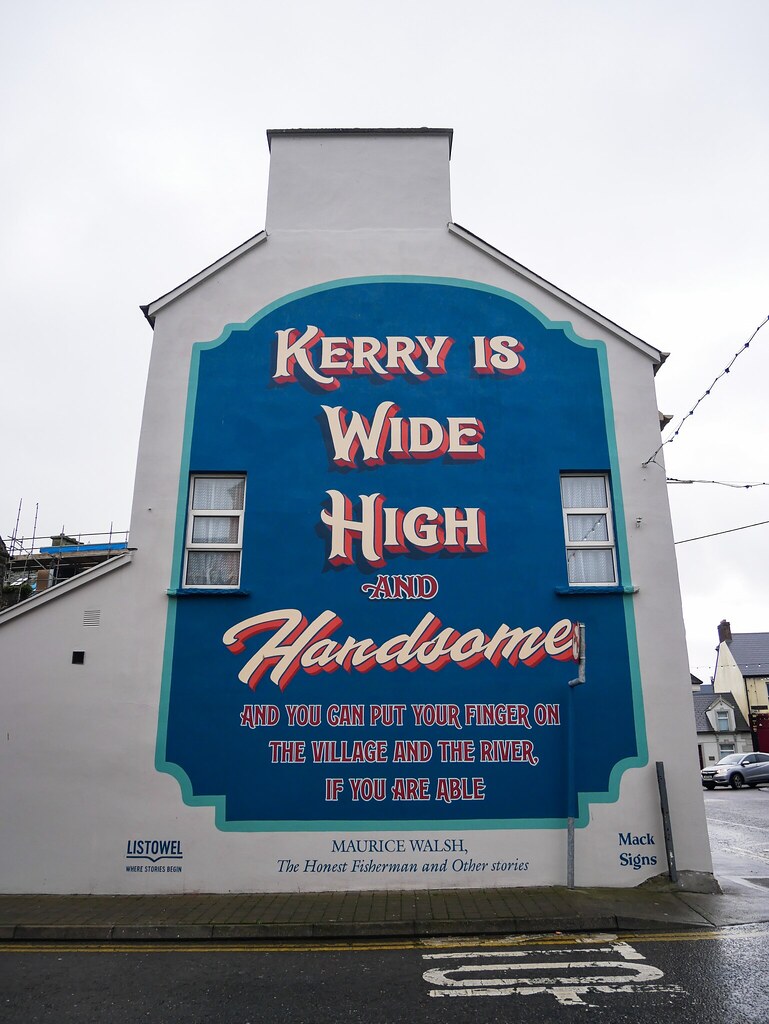 It’s the highest mountain in Ireland outside of the MacGillycuddy Reeks which hold the trophy for the tallest ones. Cloud was hugging the mountain tops but some were clear and the sun was shining so it didn’t look like a bad day to be hiking. We followed a well made trail but at some point we had to veer off, up a steep slope of moorland and towards a ridge as we were taking the route less travelled to the top. It’s called the Faha Ridge but it probably wasn’t the best day for us to tackle it as the sunshine was soon masked by thick fog and drizzle. 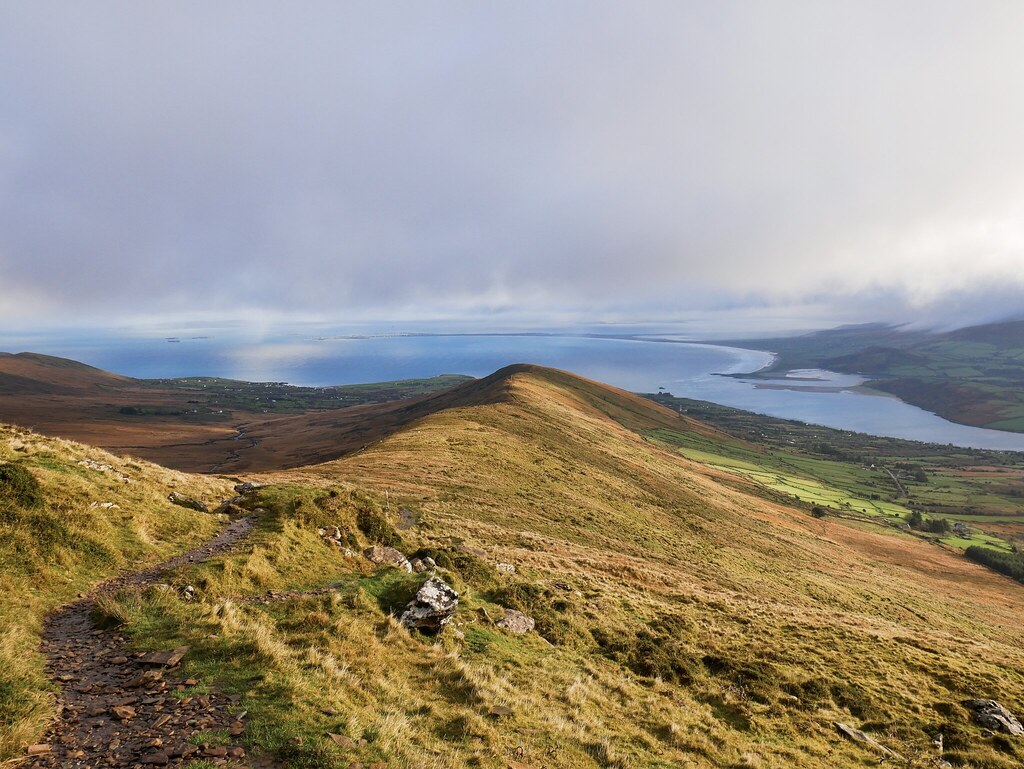 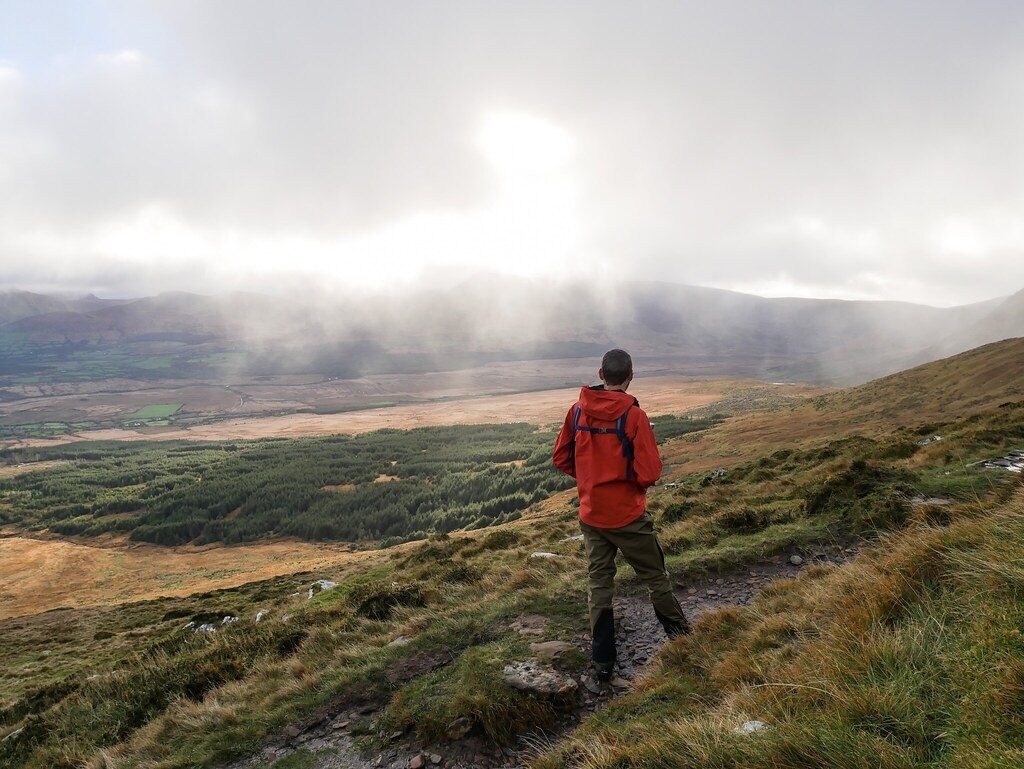 The rocks were all wet from the drizzle and the wind was pounding into us so it was no surprise that I fell over. We soon reached a section of the ridge that was like a knifes edge. It had a sheer drop on one side and an extremely steep, slanted slope on the other. We were trying to weight up if we could navigate it in these conditions. We’d have to walk across the slope on all-fours which would be fine in dry weather but in these conditions it would be like an obstacle course in Wipe Out. We also had the challenge of getting to that section of the ridge which involved a steep down-climb. By this point we were soaked and we were feeling rather stupid for even bothering to hike this far. We made the executive decision to head back but we didn’t want to take the same ridge back, we wanted to cut down the steep mountainside to the main trail. The grassy slope felt almost vertical at times and it was hard to get our feet gripped in the ground. 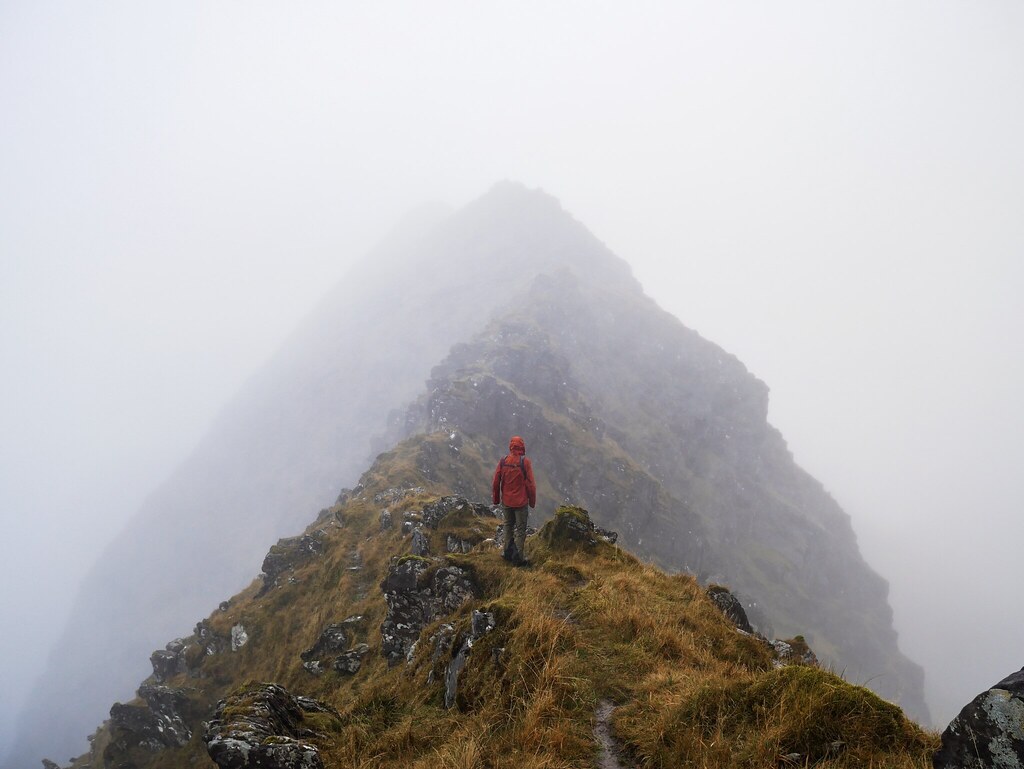 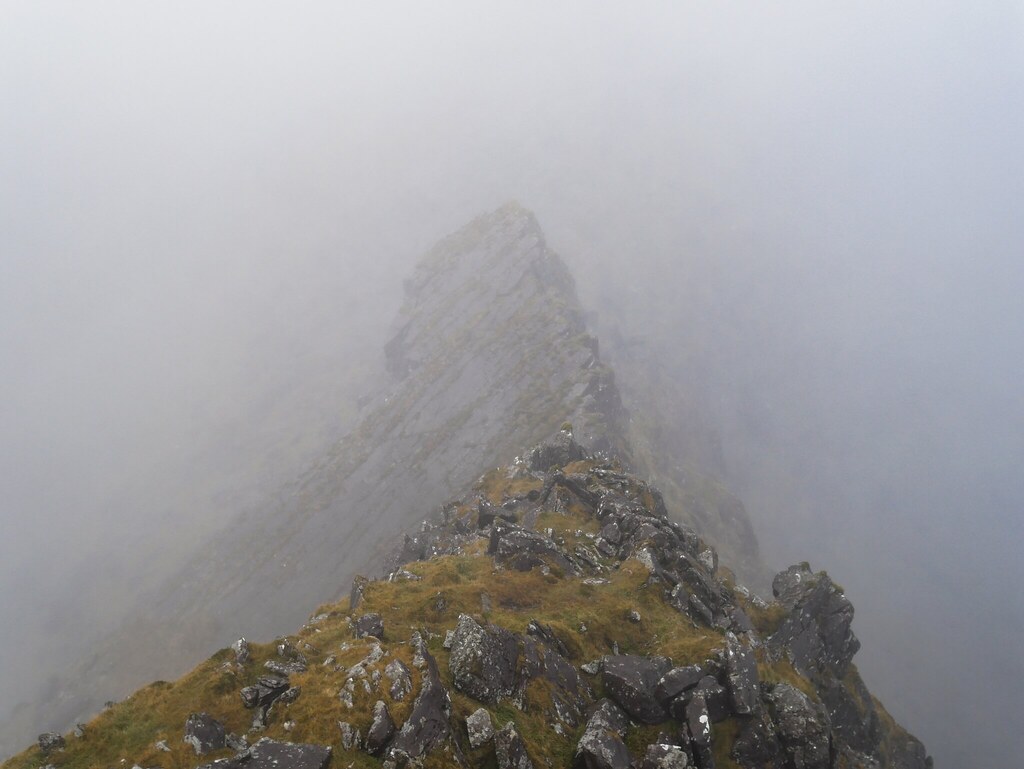 Suddenly we same across a hiking pole which was bizarre because we couldn’t imagine anyone else hiking this random route we were on. So then we wondered if someone had fallen down the mountain and we were using a dead mans stick. Further down the hill we found the second pole, but still no body. It was really strange but we took advantage of them and used one each. We never hike with poles and I must admit, they were quite helpful but as soon as we got to the trail they were pointless and a hinderance to us so we left them beside the path in case anyone else found them useful. I still wonder if there was some bloke with two broken legs, mumbling through the noisy wind for help as we moved his poles half a kilometre away from his body and trotted down the path blissfully unaware. We warmed up with some hot chocolate and hoped for a better day tomorrow.

We had a beautiful start and as we drove up a narrow country road we got a view of Mount Brandon, perfectly wrapped in a film of cloud with just the ridge penetrating through the cloud. We drove all the way to the end of the road to Brandon Point where we set off on a walk to Sauce Creek, a 750m wide bay backed with steep cliffs. It’s Irish name is ‘Sas’ which means a trap with a noose, they say if you get swept into the bay during bad weather you’ll never get back out. 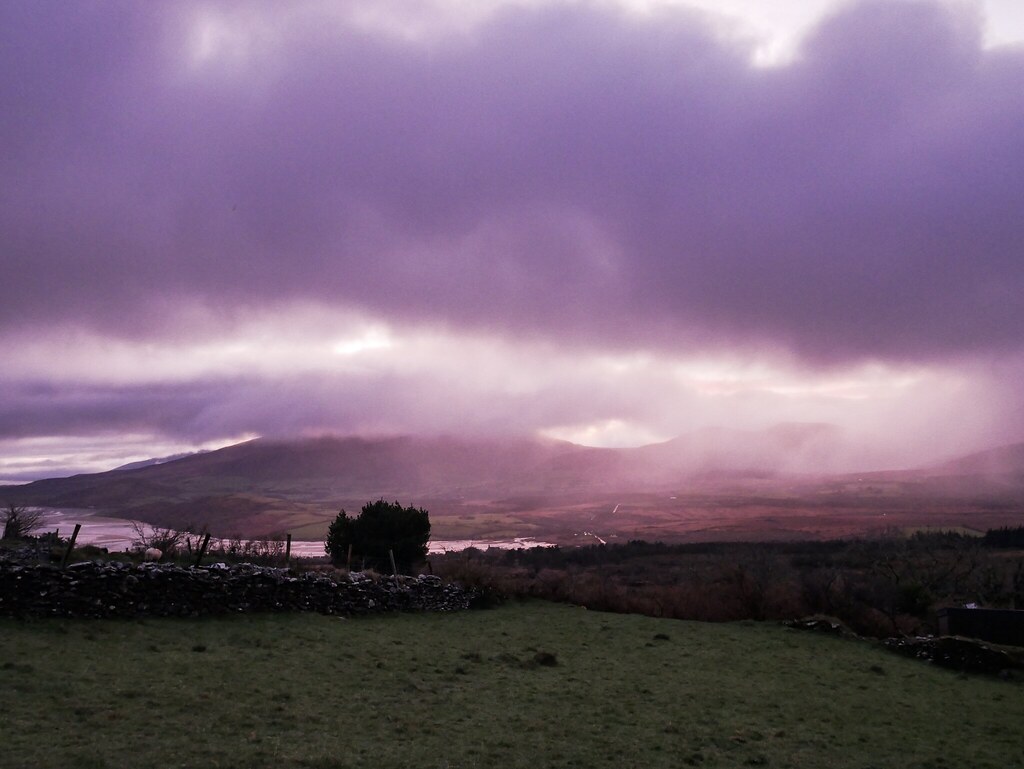 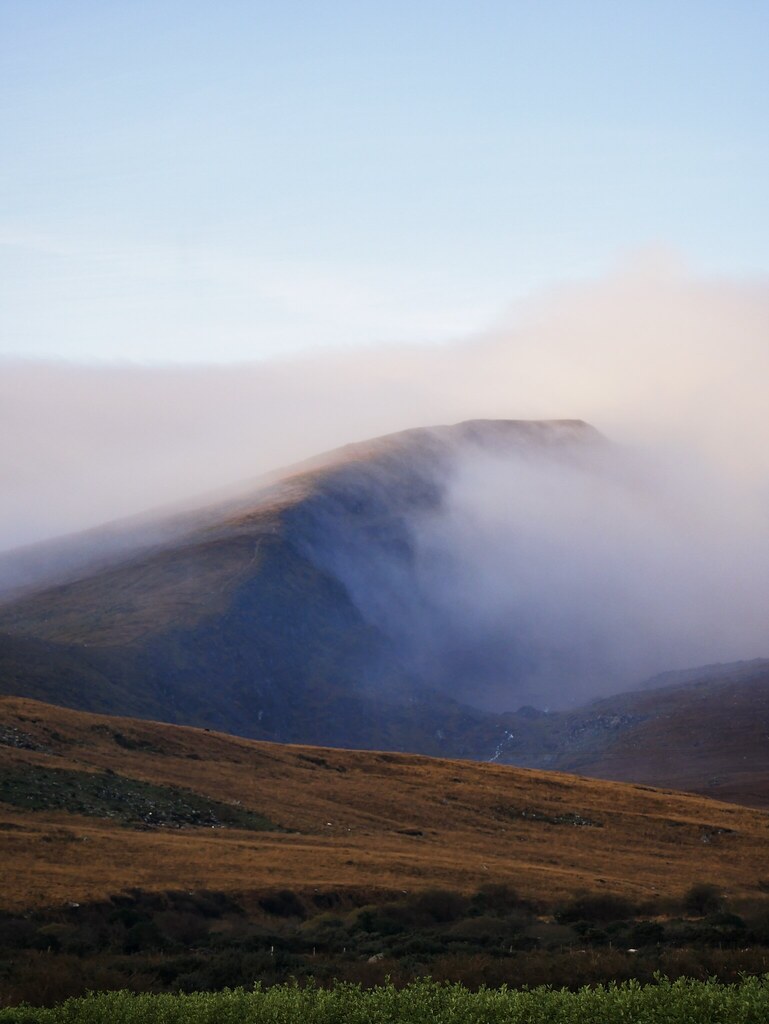 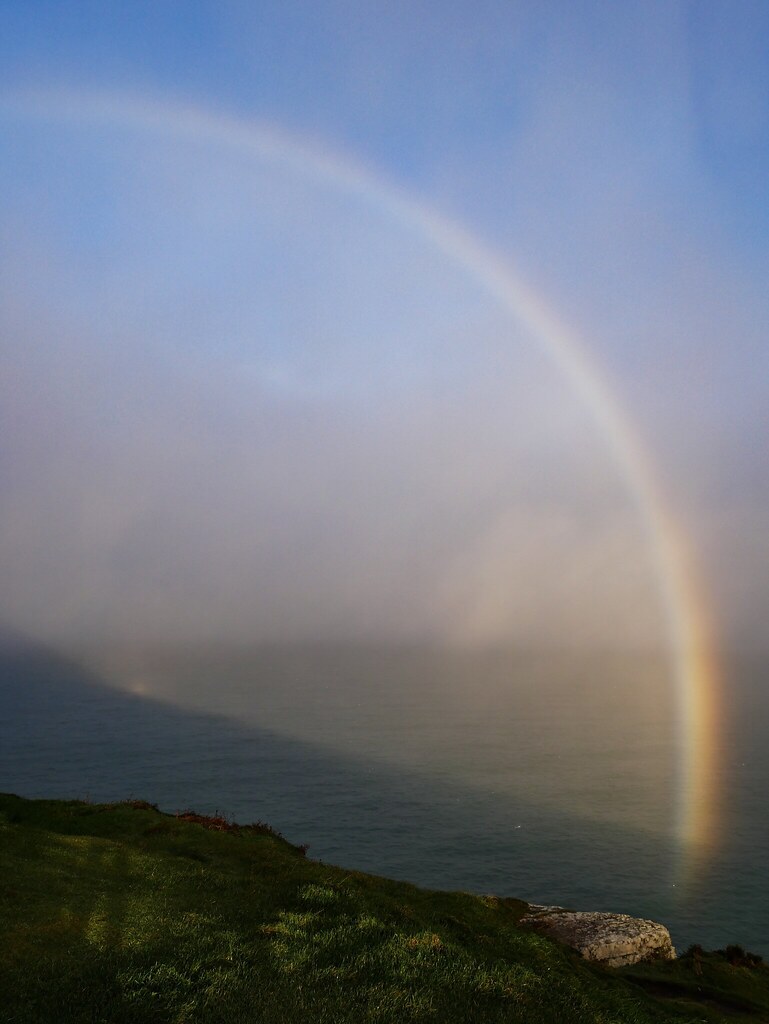 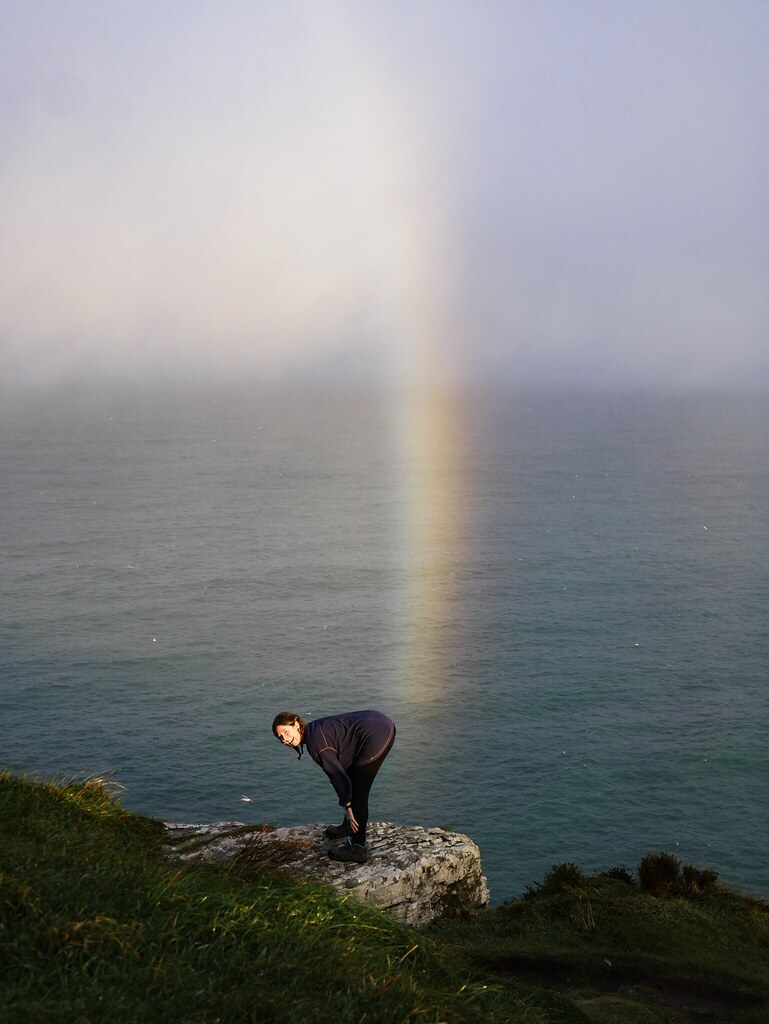 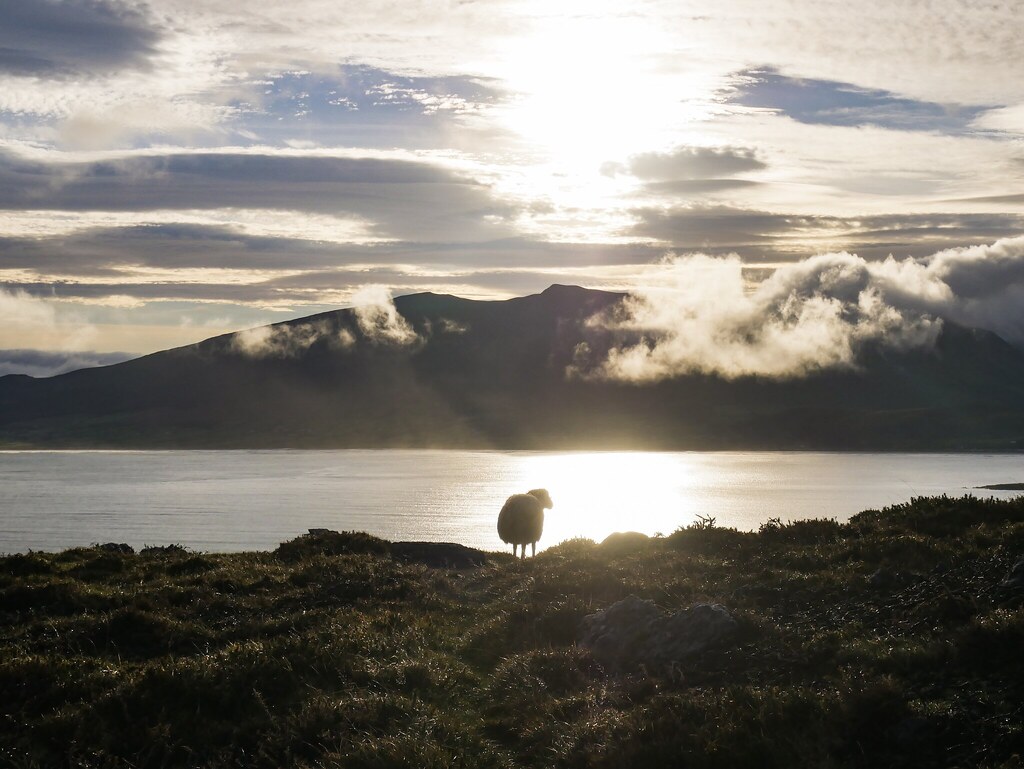 It was a boggy route the whole way, what’s new ay? As we got closer I noticed cloud was wrapped around these mountains too so I began running incase the conditions changed. I reached the edge of the cliff where a fence stopped me going any further and wind hit me like a brick wall. It was blowing an absolute gale but the view was spectacular with the remote beach below us and milky blue water. Huge cliffs surrounded the bay with the mountainous tops blanketed in cloud. It seemed like a totally inhospitable place yet three families lived on the beach until 1910, when a midwife fell while coming down the cliffs to help deliver a baby. I don’t understand why they chose that spot, they wouldn’t be able to grow vegetables and the waves and wind would batter them. It was a really beautiful place though that felt so wild and remote. 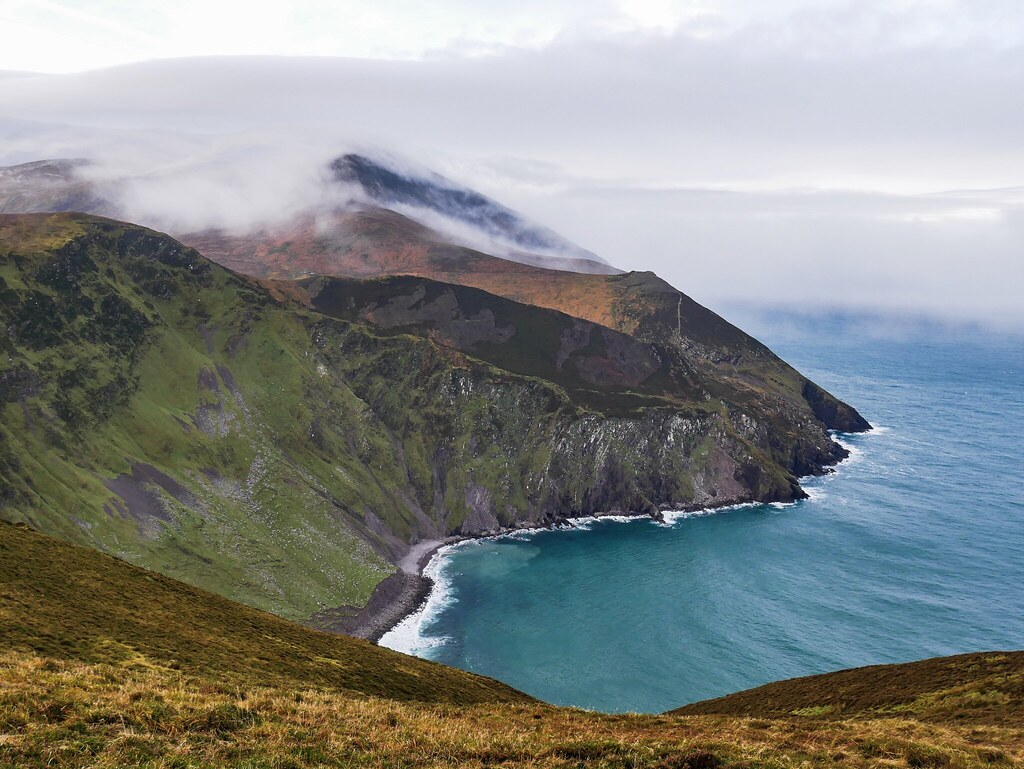 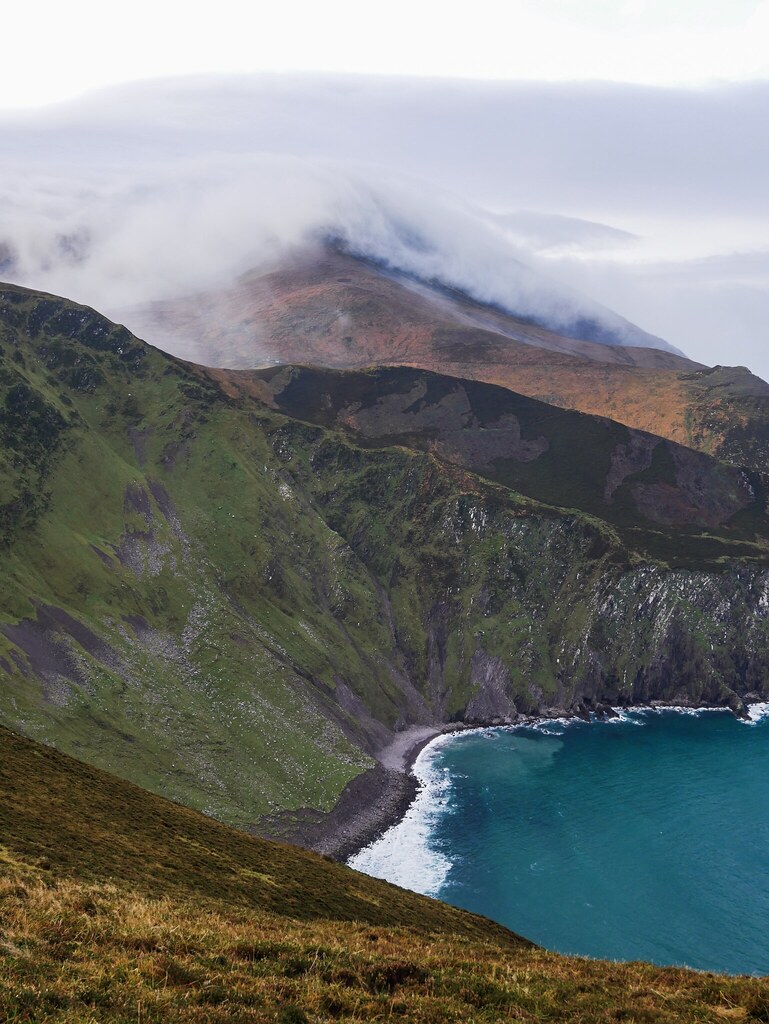 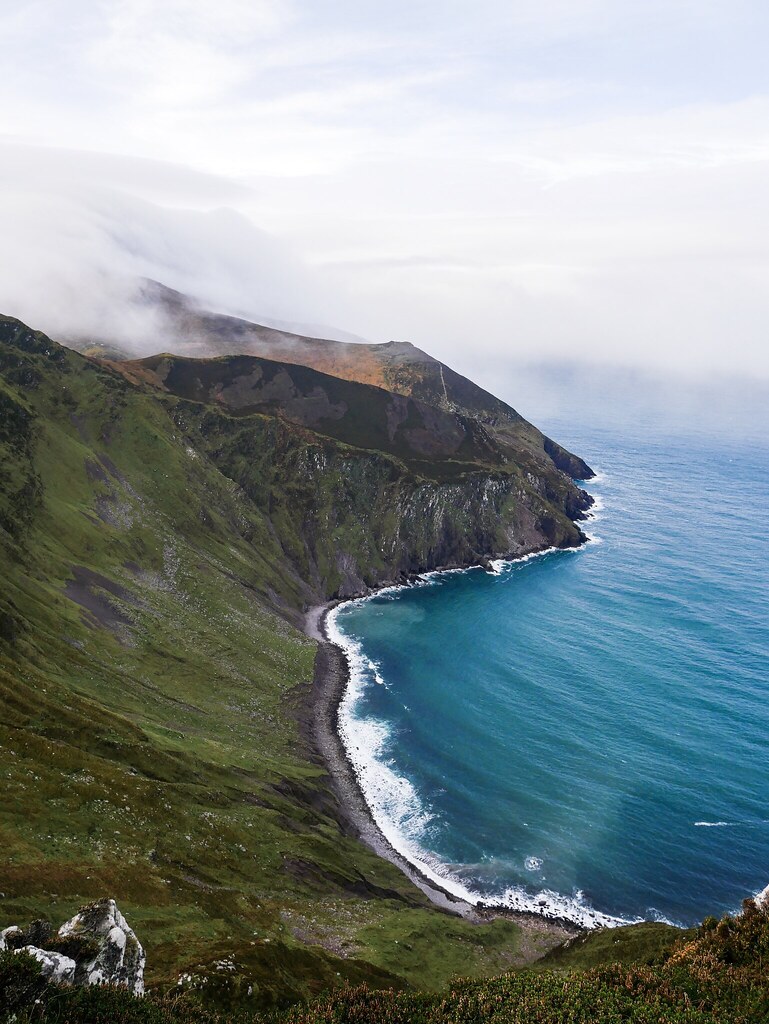 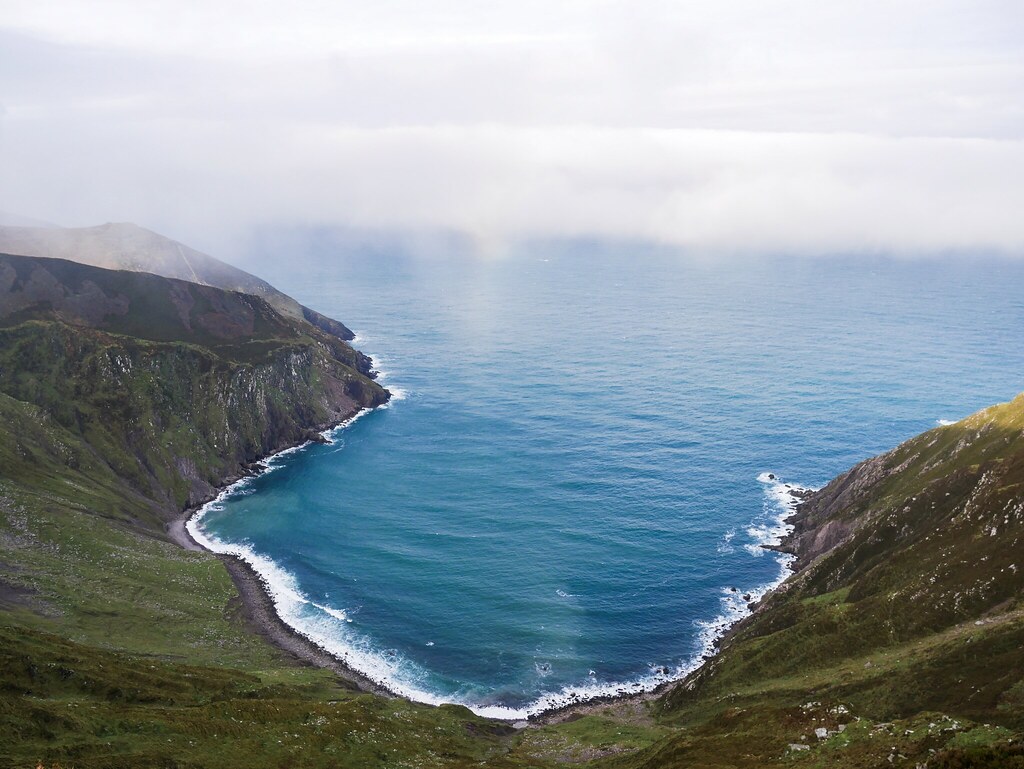 The walk back was beautiful as we had storm clouds rolling in which made the most perfect contrast against the aqua blue sea and the colourful rainbows. By the time we got back to Helga the first few droplets of rain began falling and we had the kettle on just as the heavens opened. 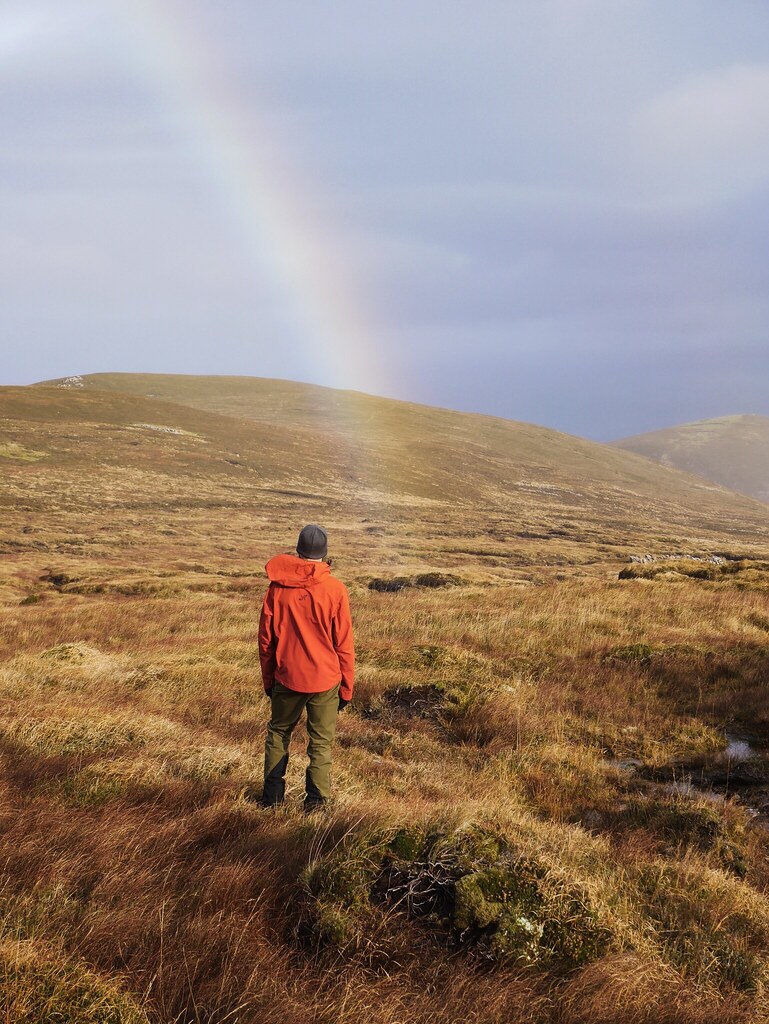 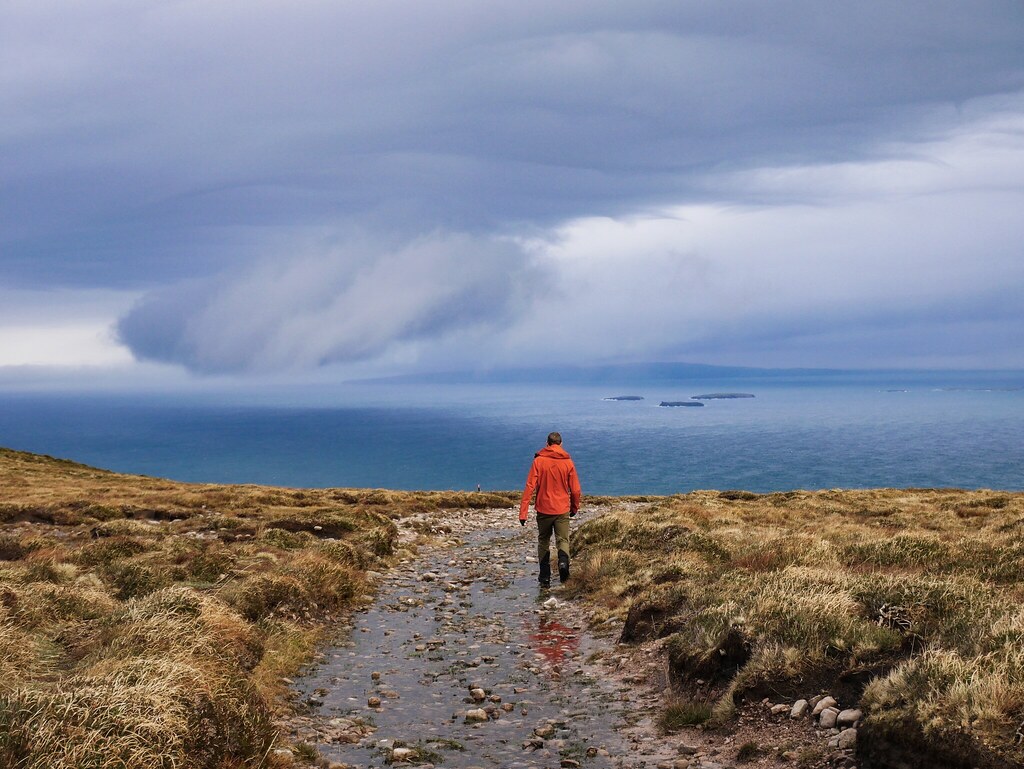 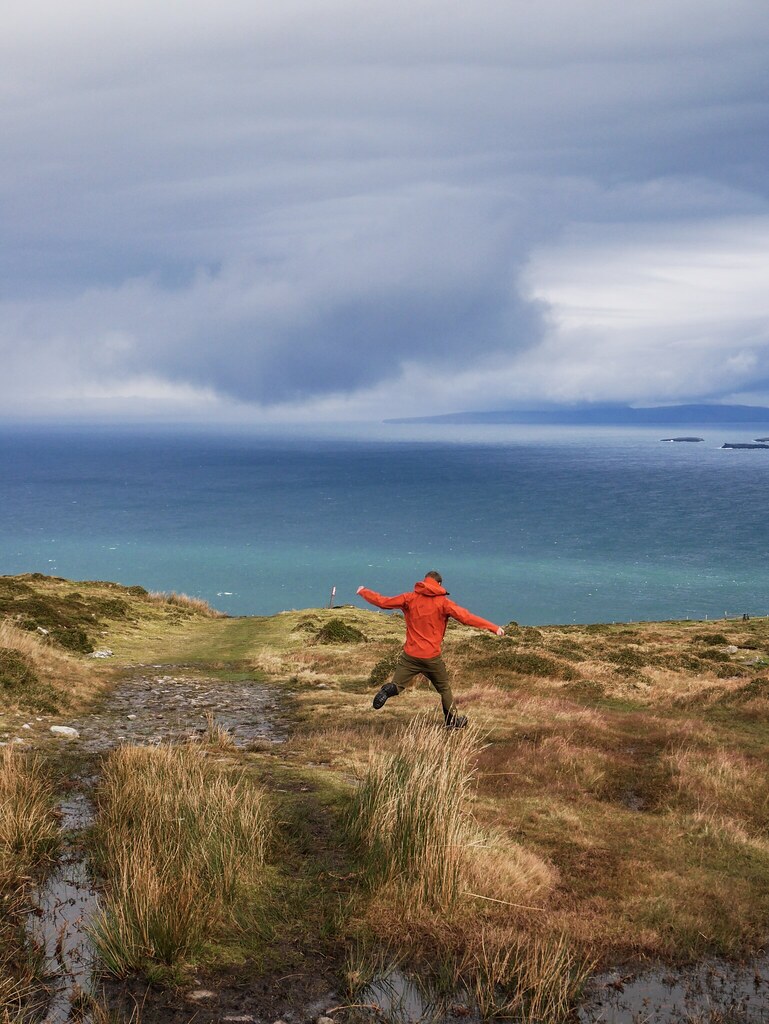 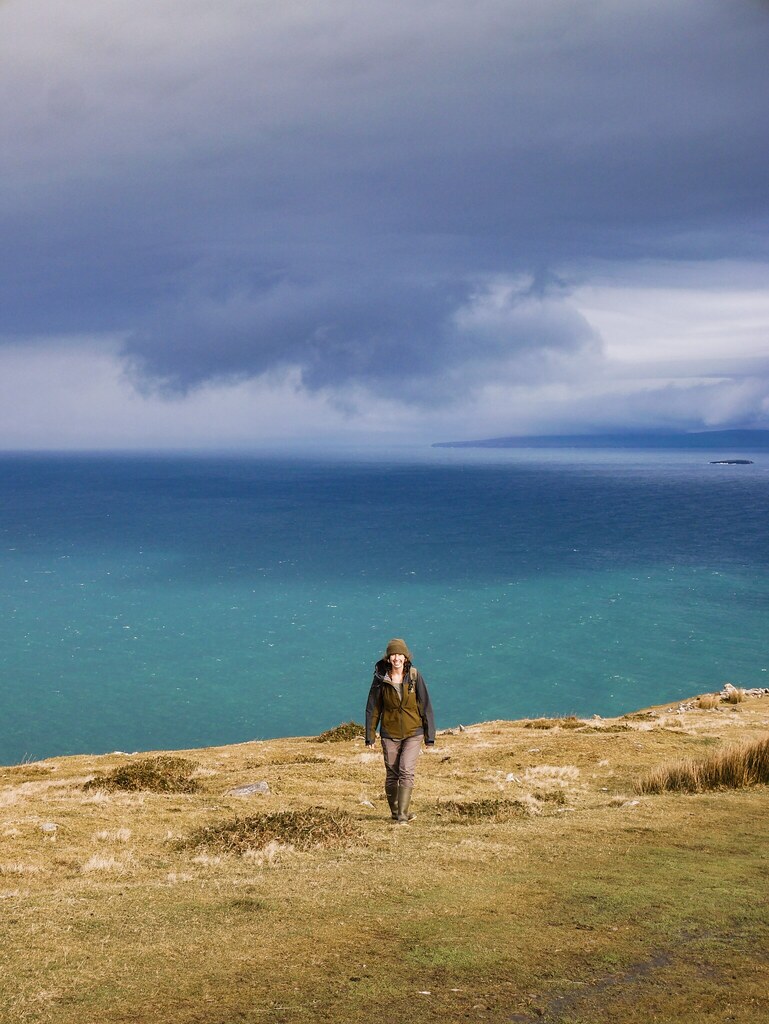 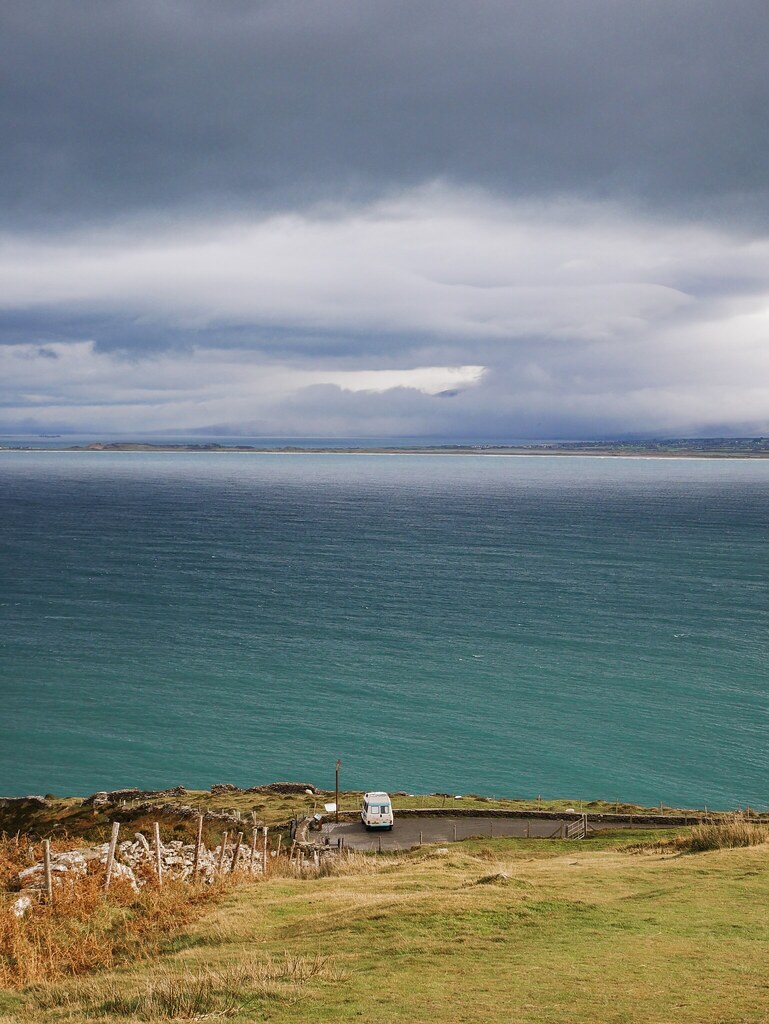