After yesterday’s big hike we decided to take it easy today on a driving tour. Our first stop was the colourful village of Clifden. It was mostly closed up but they had some pretty shop fronts to wander past. We also stocked up on food at Lidl and were rather embarrassed when the shop clerk told us we couldn’t buy our bottle of Irish cream or beer as it was before 10:30am. We didn’t have a clue about the rule as we can buy booze at any hour of the day in England.

Anyway, we left the town and headed for Sky Road, a scenic drive along a peninsula. Our first stop was Clifden Castle which now sits in ruins, but from the outside it looked like it was in pretty good condition. The founder of Clifden built the grand home for his family in 1818 but after it was inherited by his son things began to go downhill. In 1845 the famine struck and caused more problems like bankruptcy when the tenants emigrated or couldn’t afford rent anymore. The house, along with the land and most of the town were sold to the mortgagees for just £21,000. After seeing how impressive the outside was we were shocked to see the state of the interior. 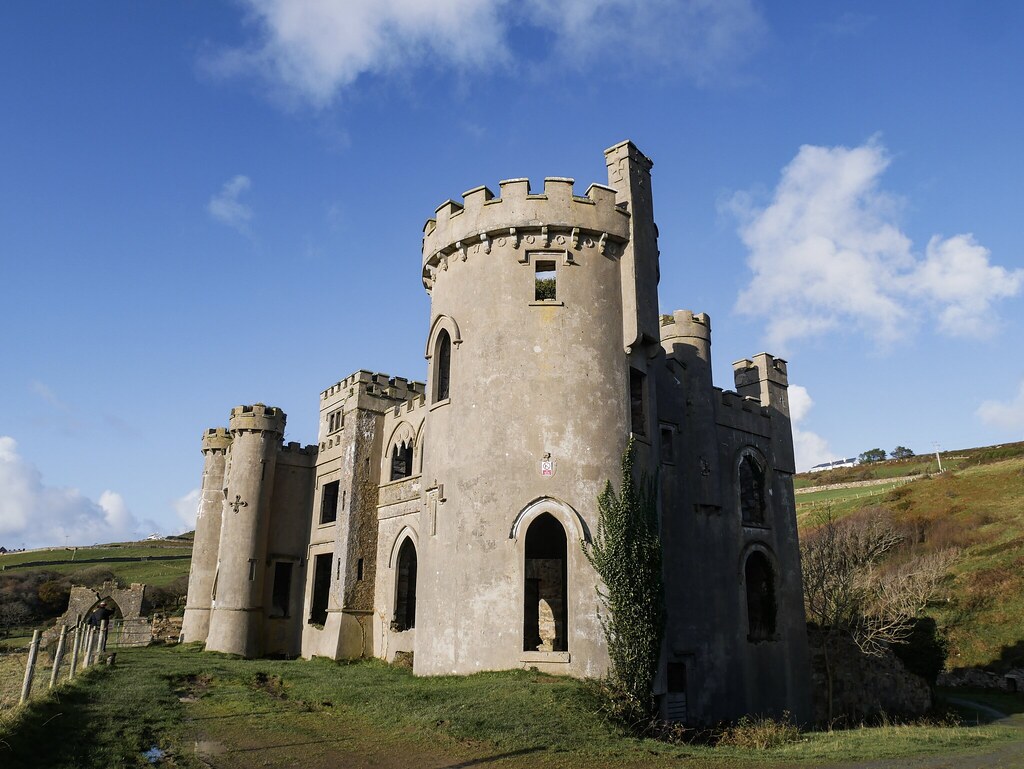 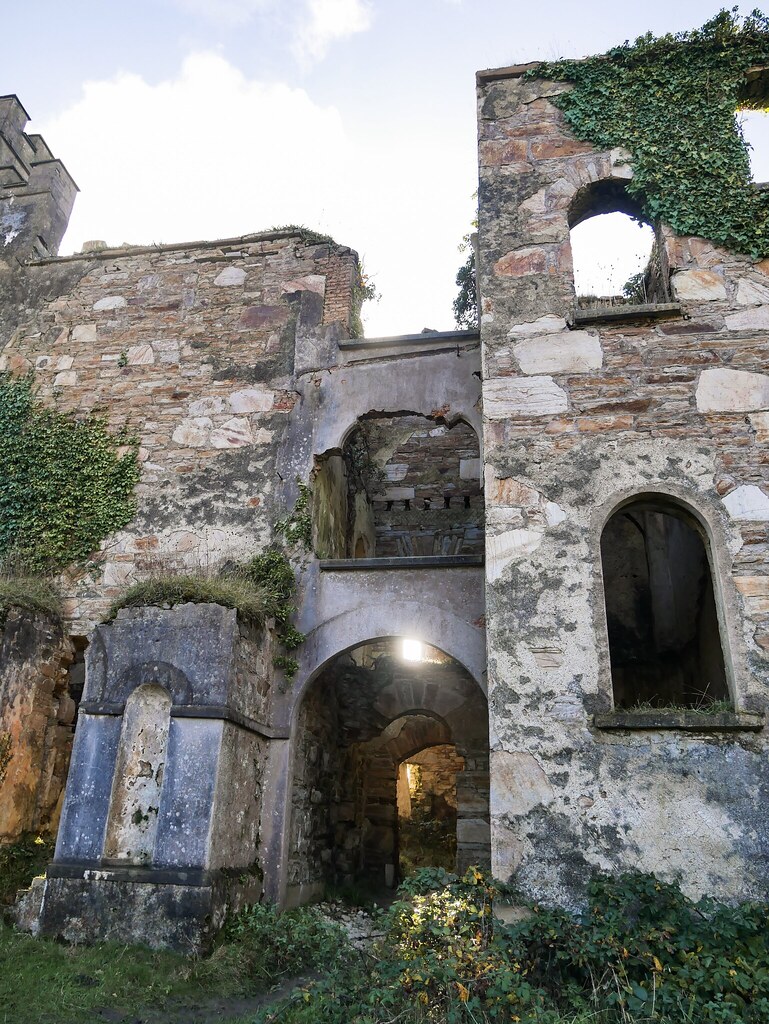 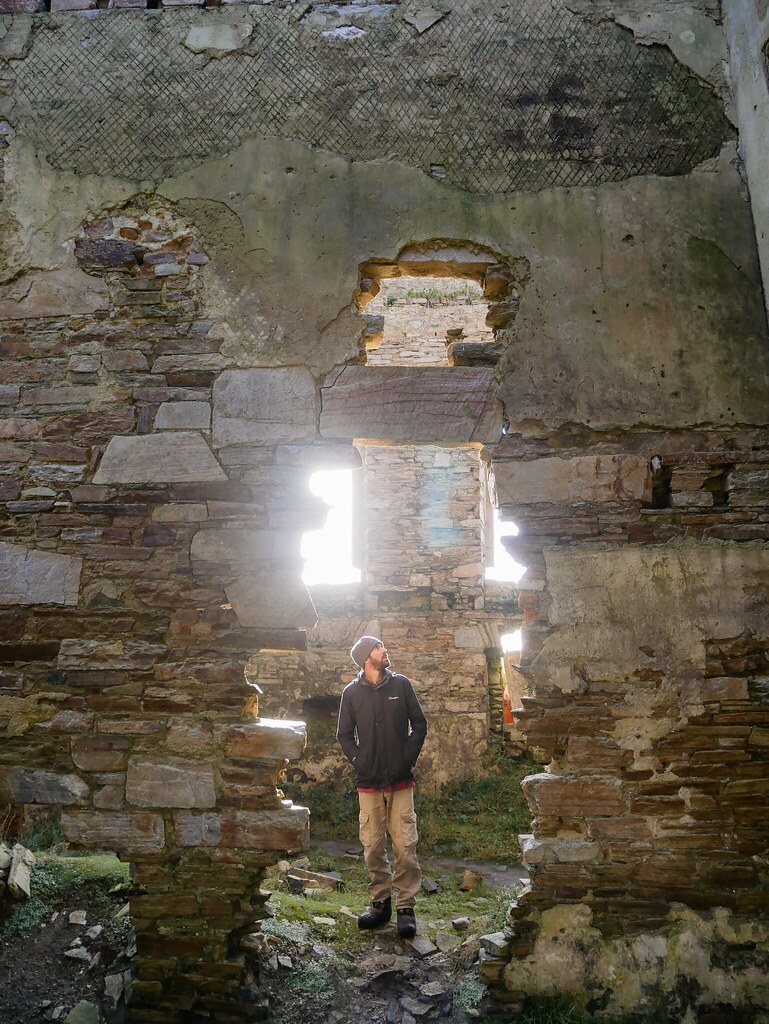 It was totally roofless with ivy creeping up the crumbling stone walls. We were kind of amazed that we were allowed to freely walk through such a fragile building. As we left the castle we bumped into a farmer and got chatting about the castle. He said he was the joint owner of it, along with 7 other farmers in the area. We asked about the danger of allowing people to go in the castle and the law suit if someone got hurt and we suggested a sign to allow entry at your own risk. He said they’ve talked about adding fences with signs but trying to get all 7 farmers to agree on something is next to impossible. 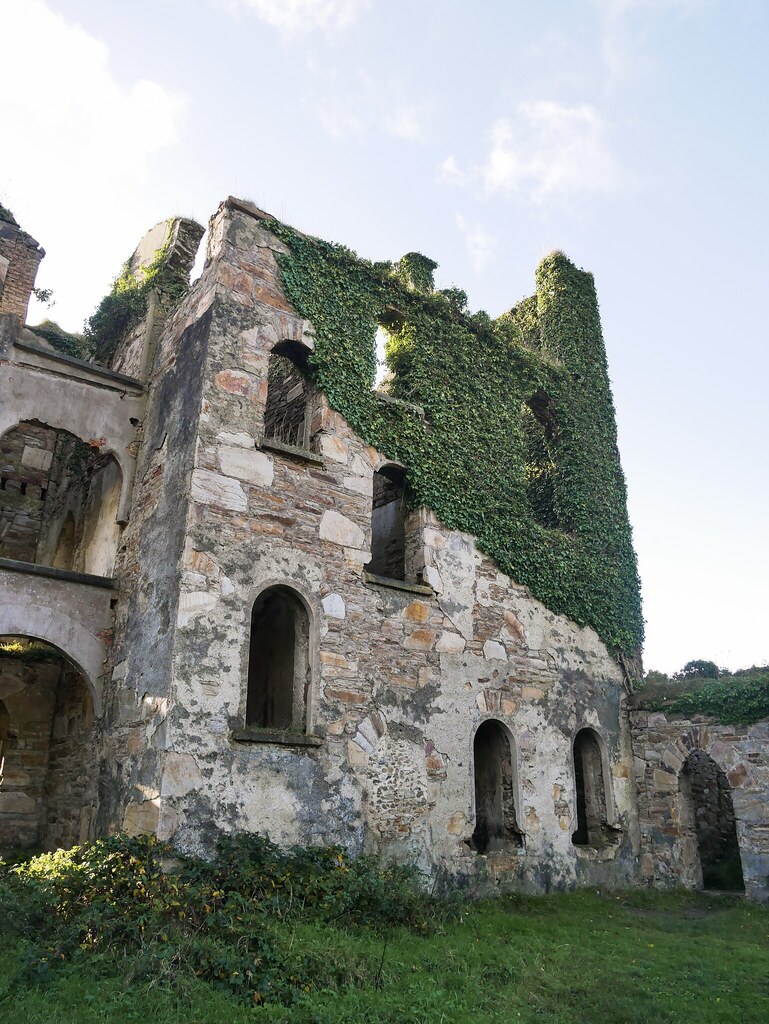 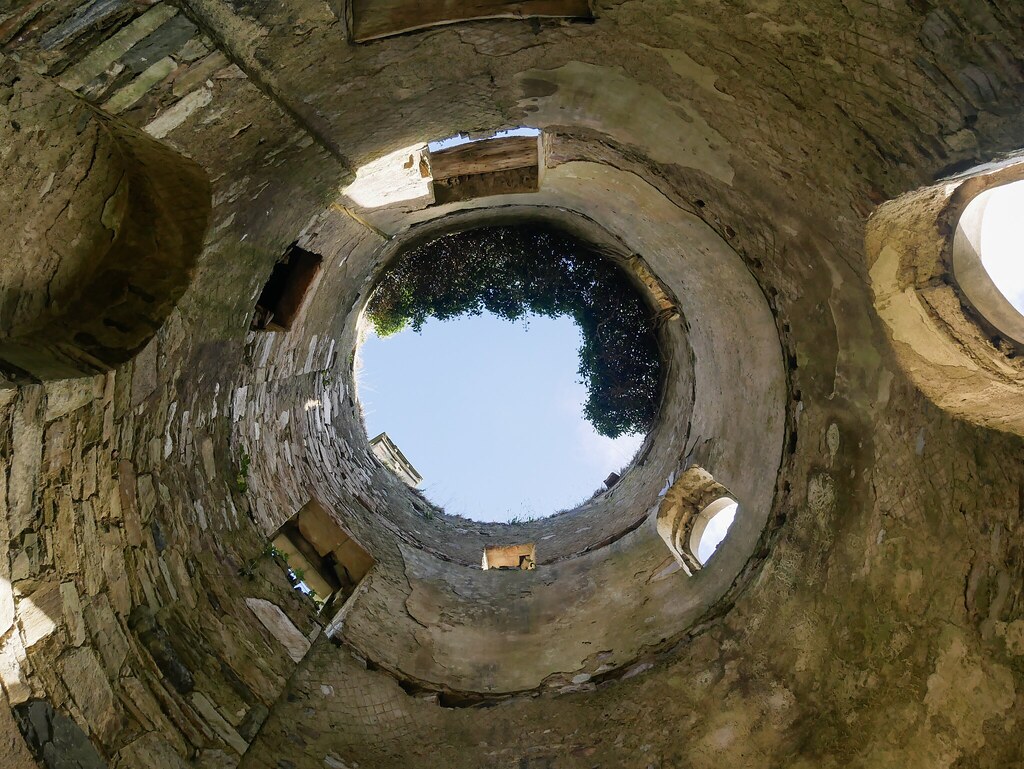 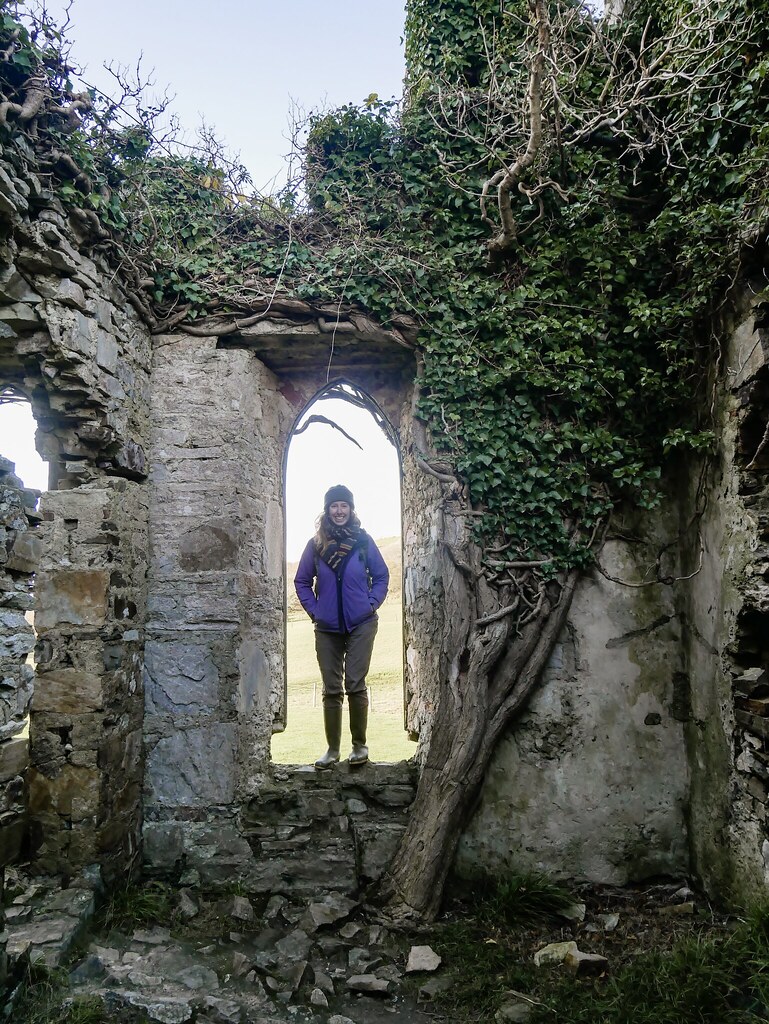 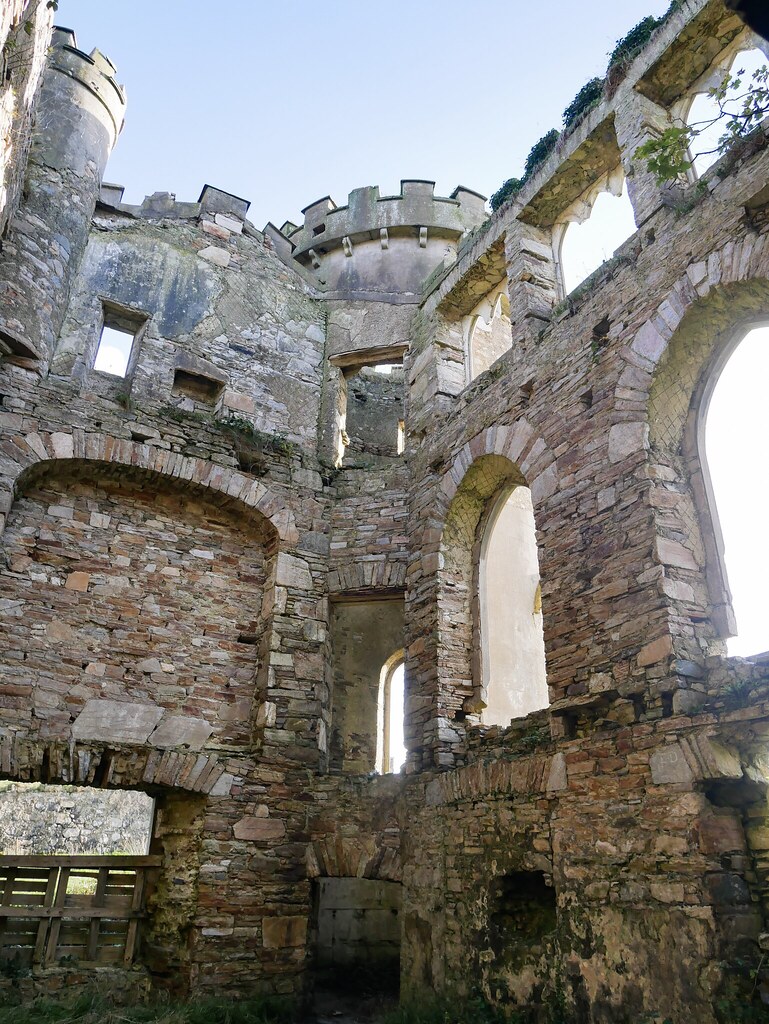 We continued driving along the Sky Road where there were two options, the low road or the high road and we opted for the latter as it gave us a great vantage across the coastline. It was a single track road built along the edge of a hillside but it offered a clear view of oncoming traffic which meant we could pick up speed on the uphill sections and Craig could relax and enjoy the drive. We stopped at a viewpoint for tea where we could see the end of the peninsular and the sea speckled with islands. We decided to drive to the very end of the headland where there was a beautiful beach with turquoise water. In fact it looked fabulous when we pulled up but I could barely take a photo as it was starting to rain and then the rain quickly turned into hail yet somehow the sun was still shining. 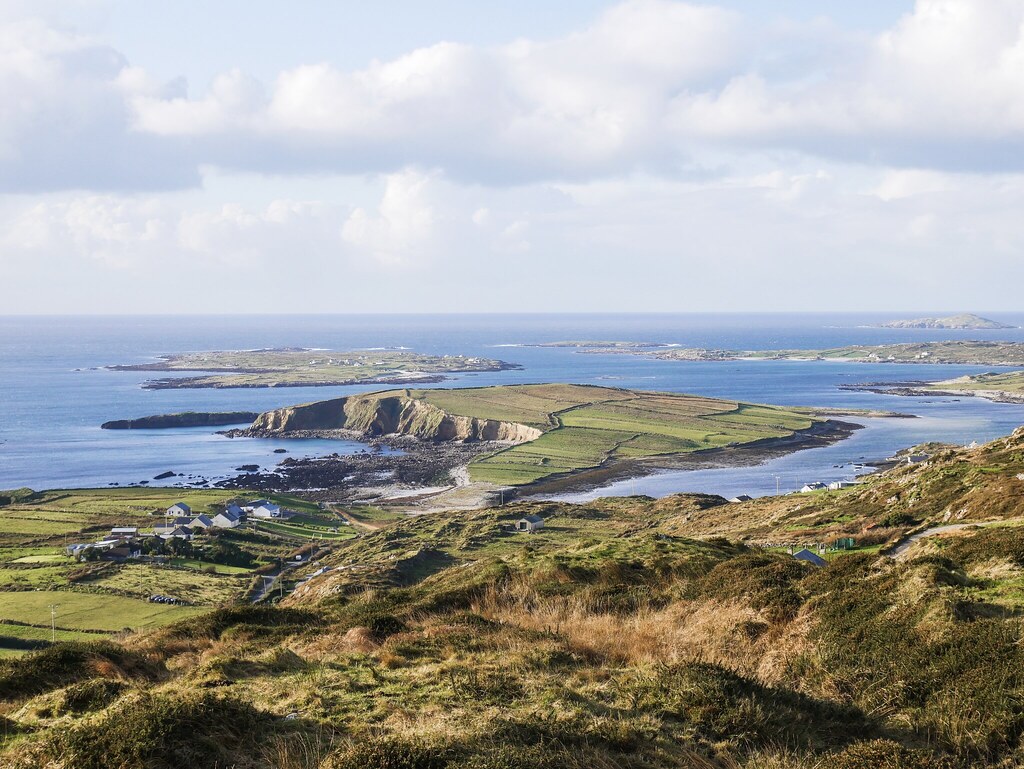 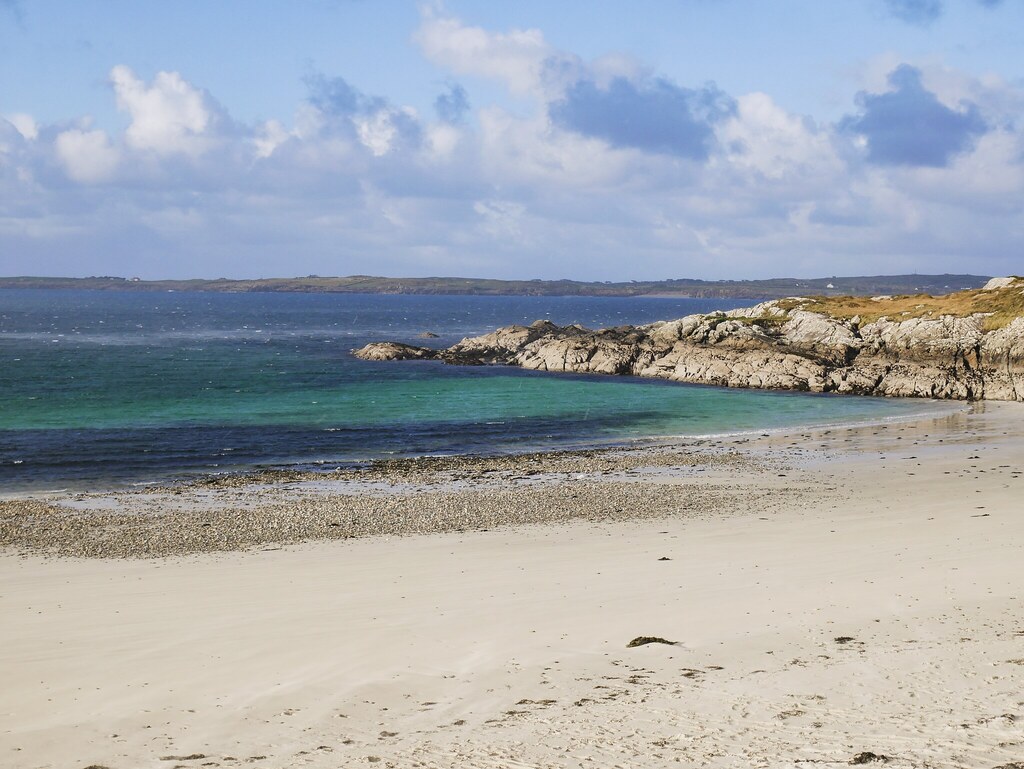 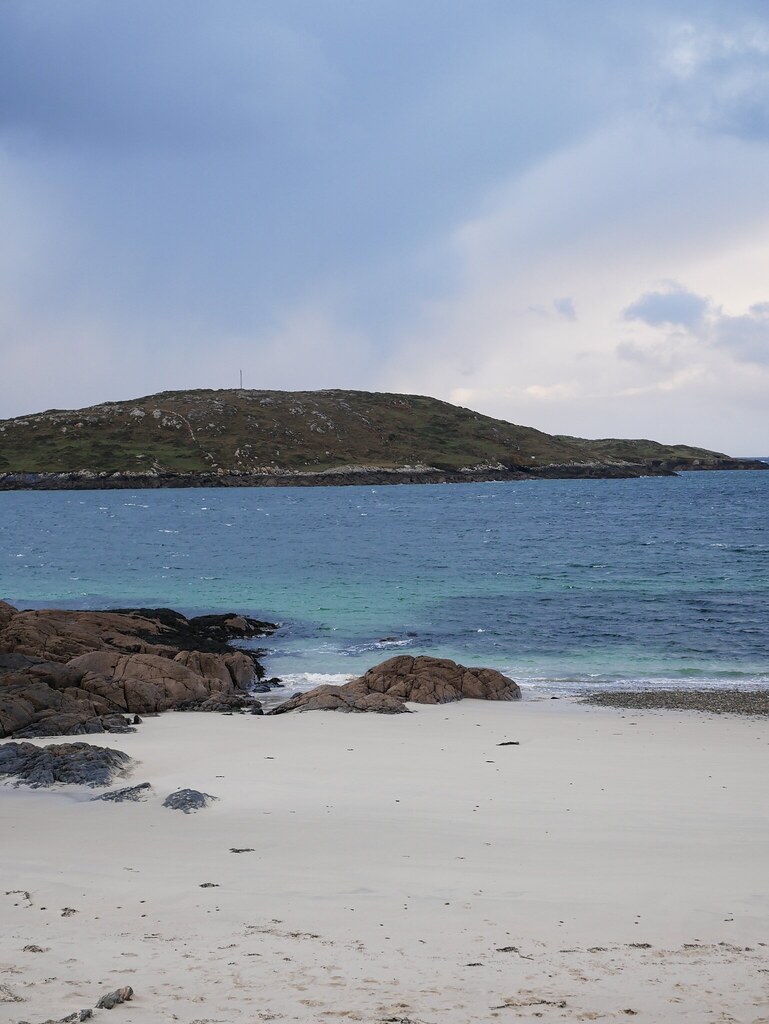 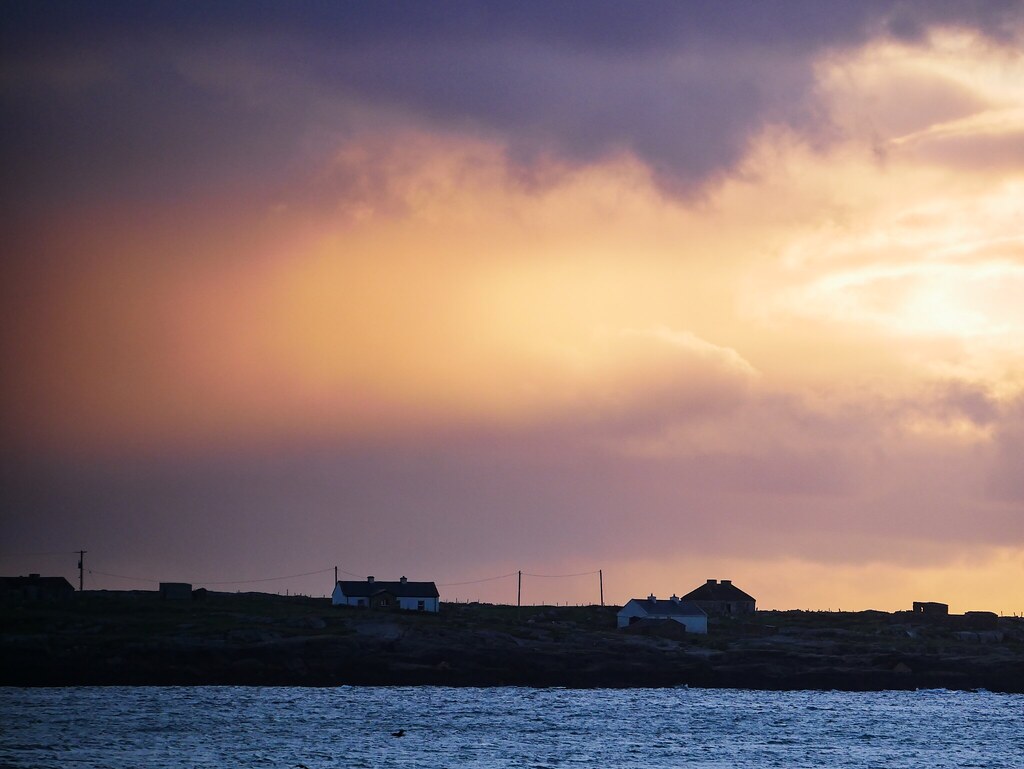 The following morning we were fed and watered before the sun had even risen. As we set off on the Sky Road we drove towards a fabulous pink sky. Clouds turned into a cotton candy delight with the Connemara mountains on the horizon and pink reflections in the sea inlets. After stopping a few times for photos we made our way to Mannin Bay which turned out to be quite a rough beach so we didn’t spend too long there and headed off to the beaches around the golf course. The water was so much calmer and the white sand beaches made it look very tropical. A group of cows walked along the beach too which really made us feel like we were in another country. 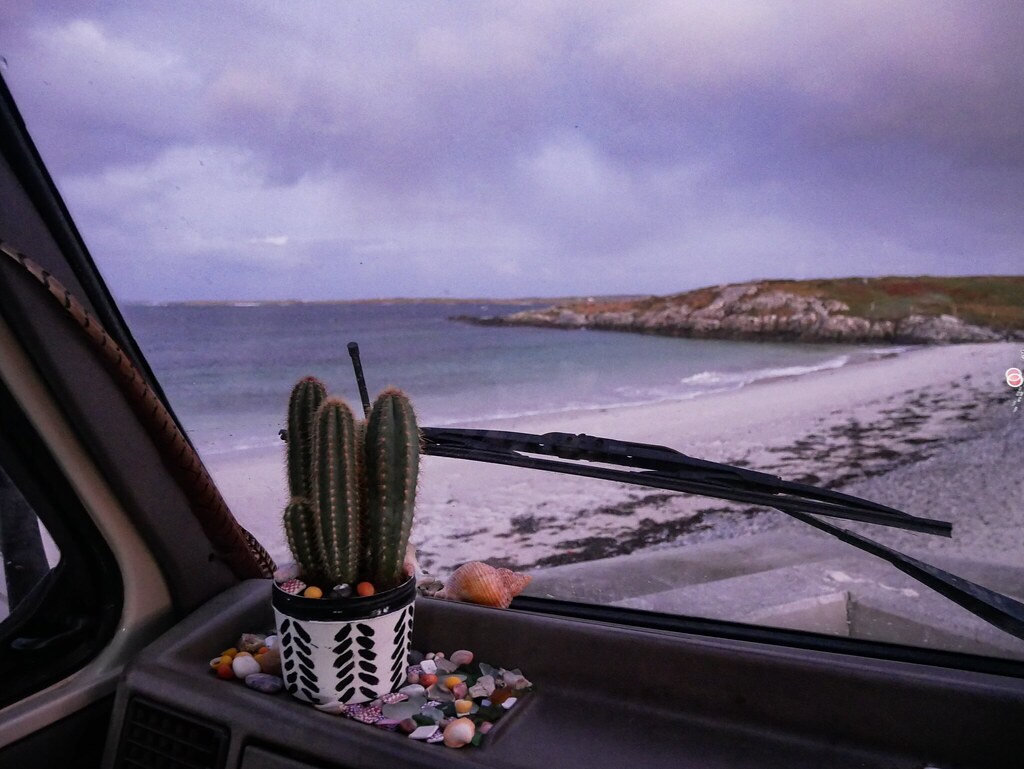 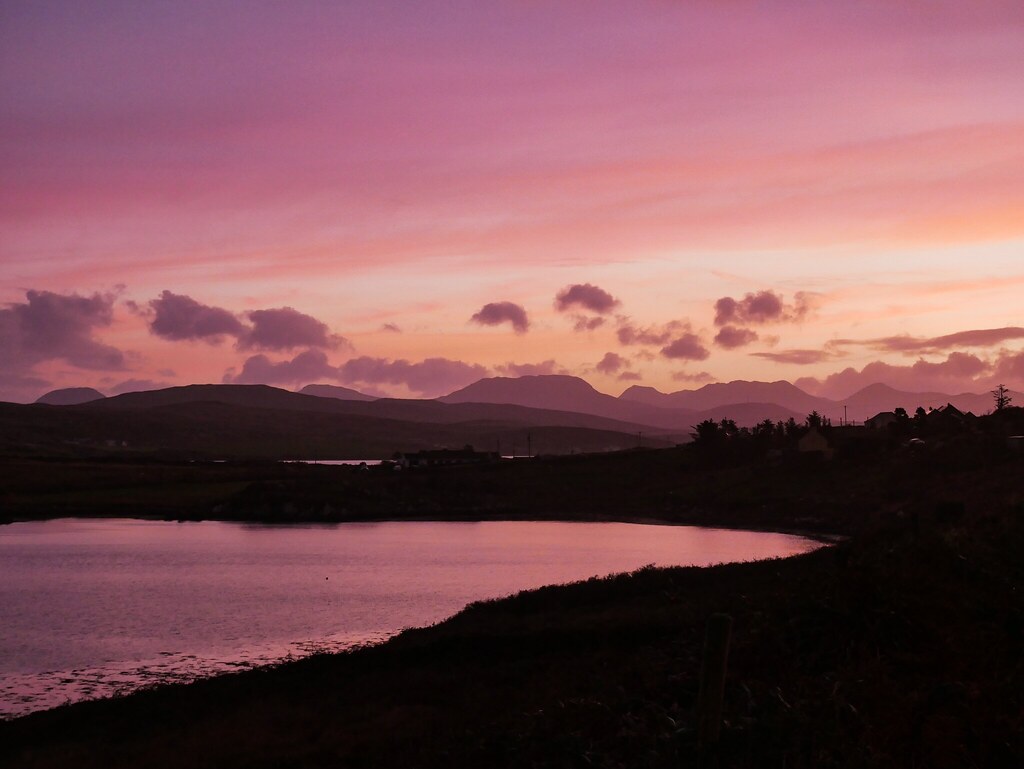 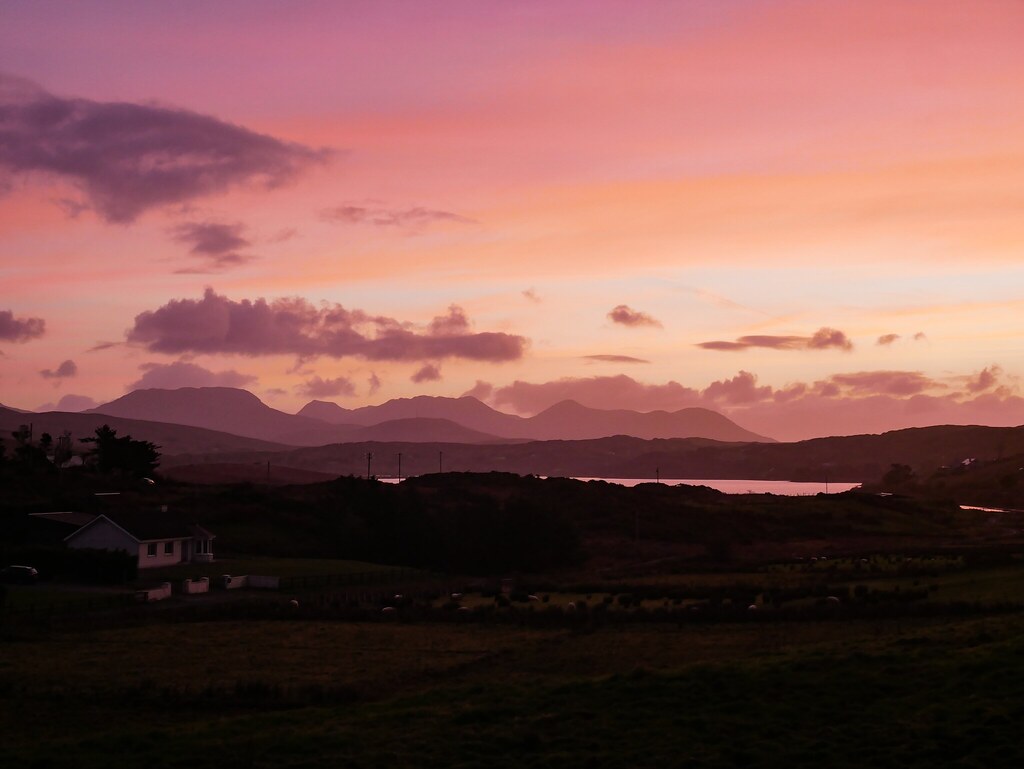 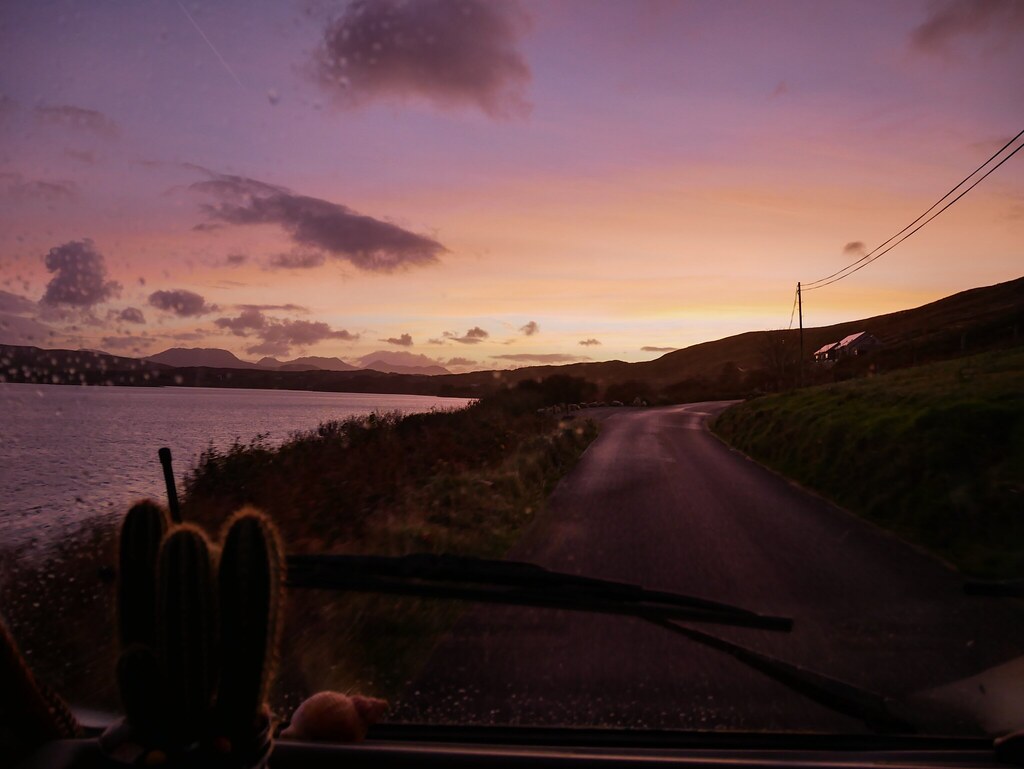 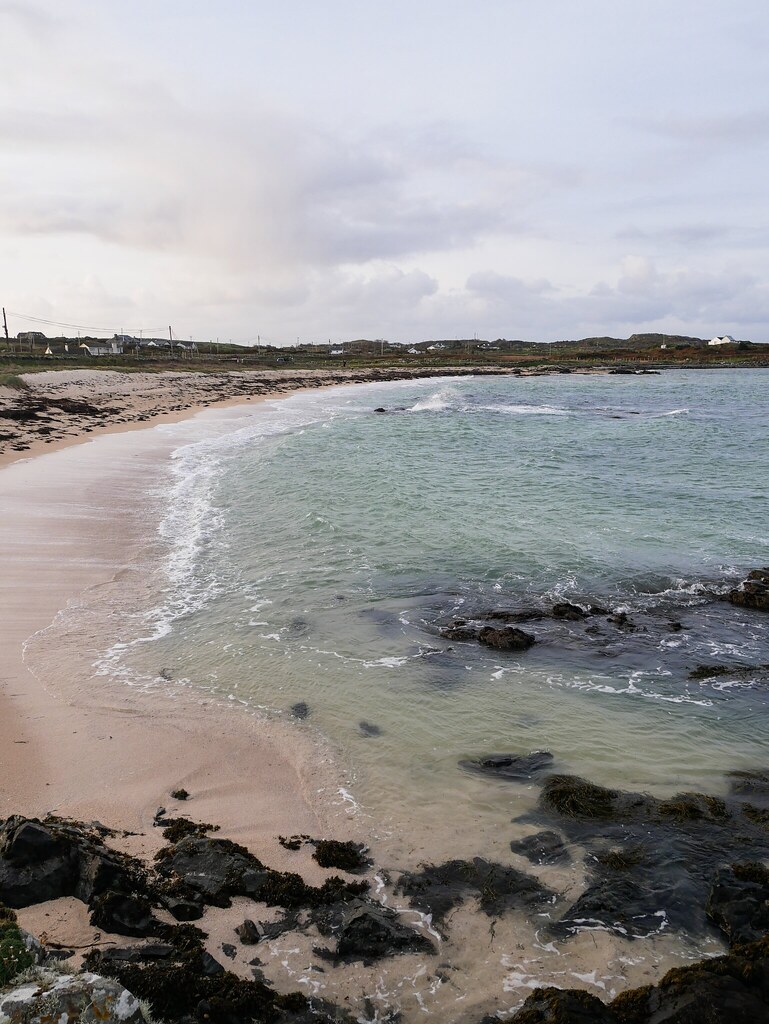 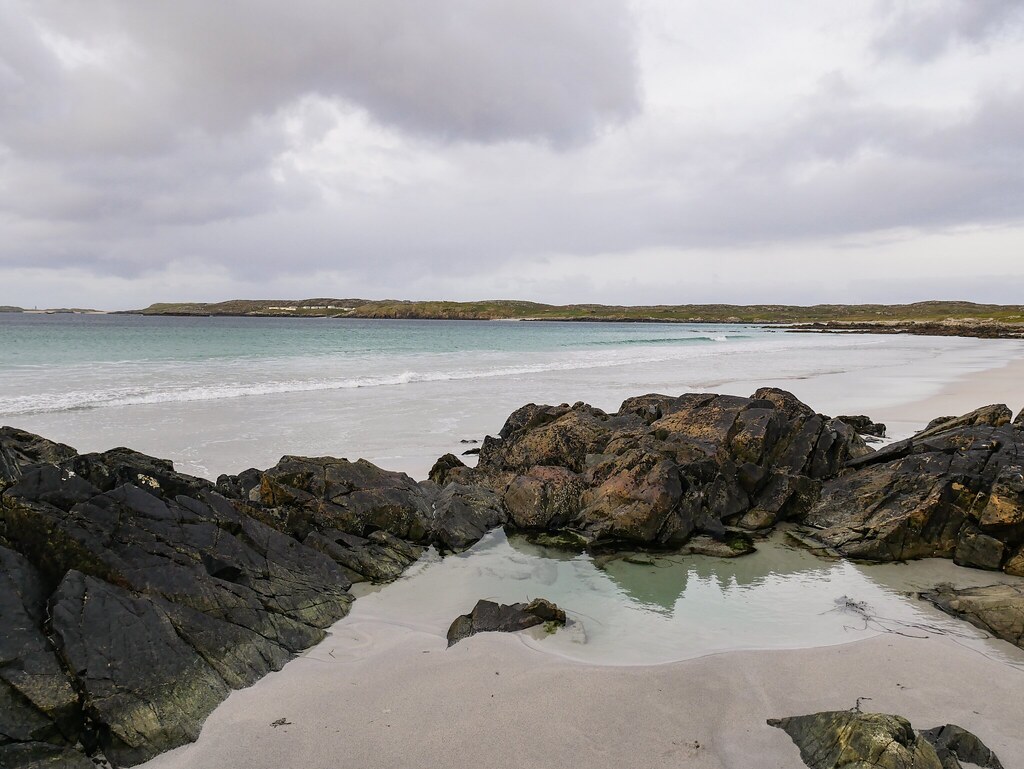 In the afternoon we headed out on a hike up Irrisbeg at 301m high. On our way up we had to stop and say hello to a lovely white horse. It confidently trotted towards us and allowed me to give it’s head a scratch, albeit I was rather petrified that he’d bite me. The hike was short but sweet with a little uphill slog but we were soon at the top with a view across the tombolo with sand dunes separating two beaches. The light wasn’t great for photos so we made our way back down and did a hike along the tombolo beaches. 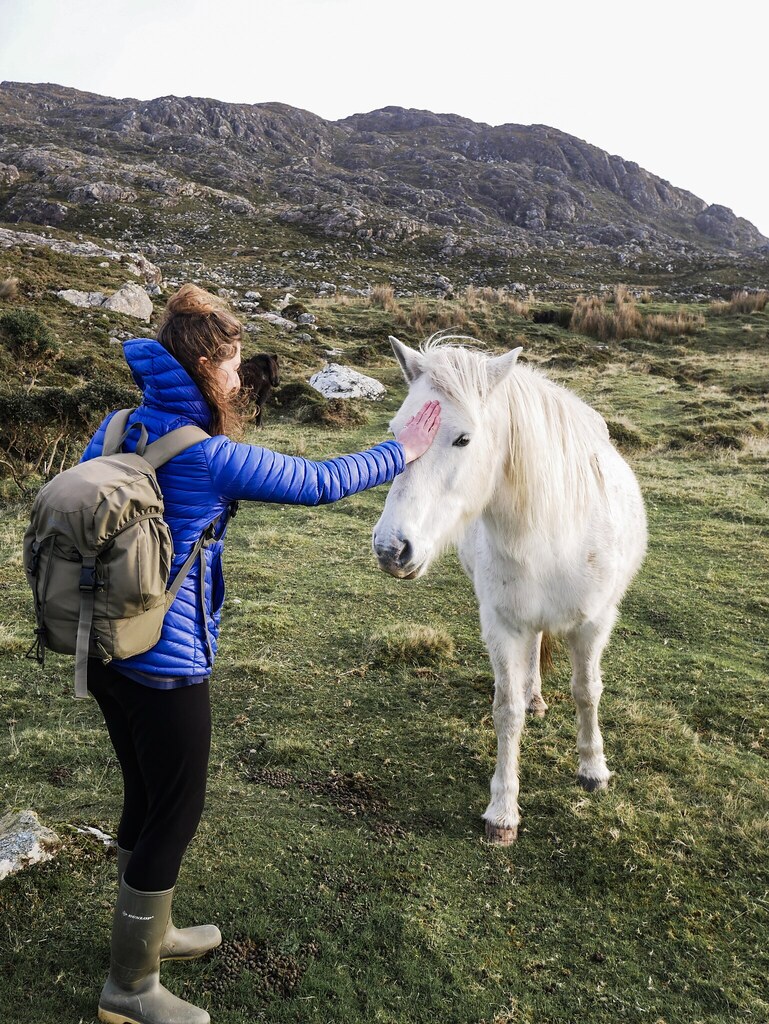 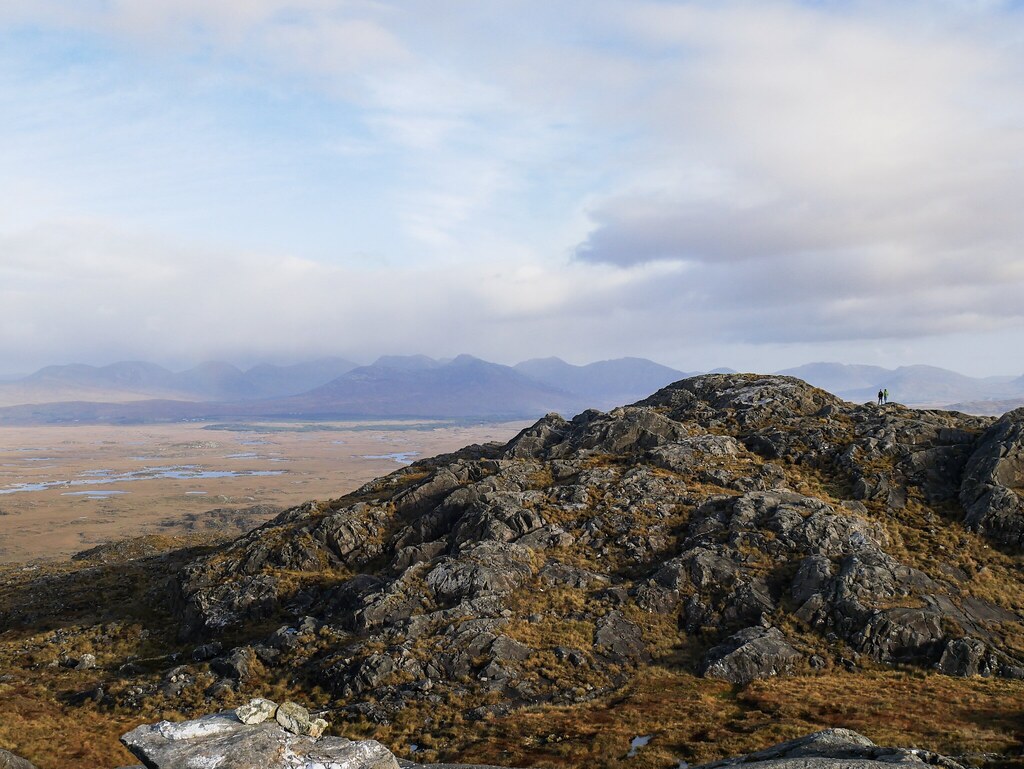 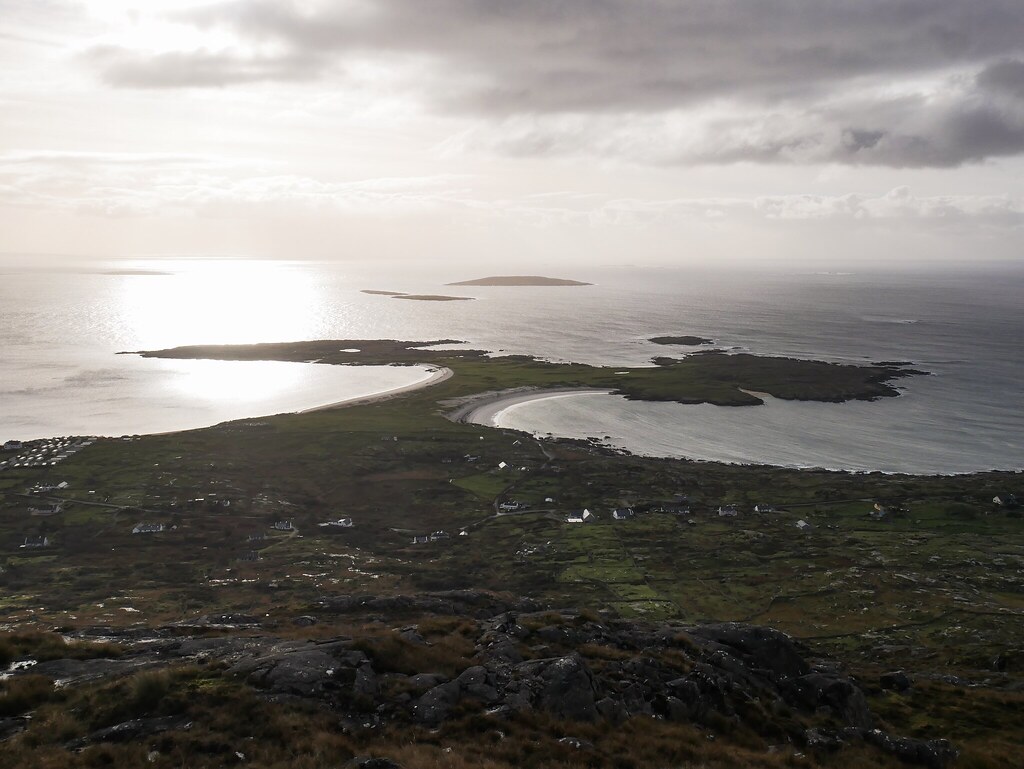 The closest property to the beach was an abandoned house and mobile home with smashed windows and graffiti. It made us wonder what happened to the place, why was it abandoned and why hasn’t anyone else bought the perfectly located property and land? We started our walk with a stroll along Dogs Bay Beach and we continued up and around the headland where there were a couple more little beaches tucked into nooks with turquoise water. Gurteen Bay was the other main beach with pristine white sand. Had it not been an overcast day it would of definitely looked like the Caribbean. But hey, ya can’t have everything. 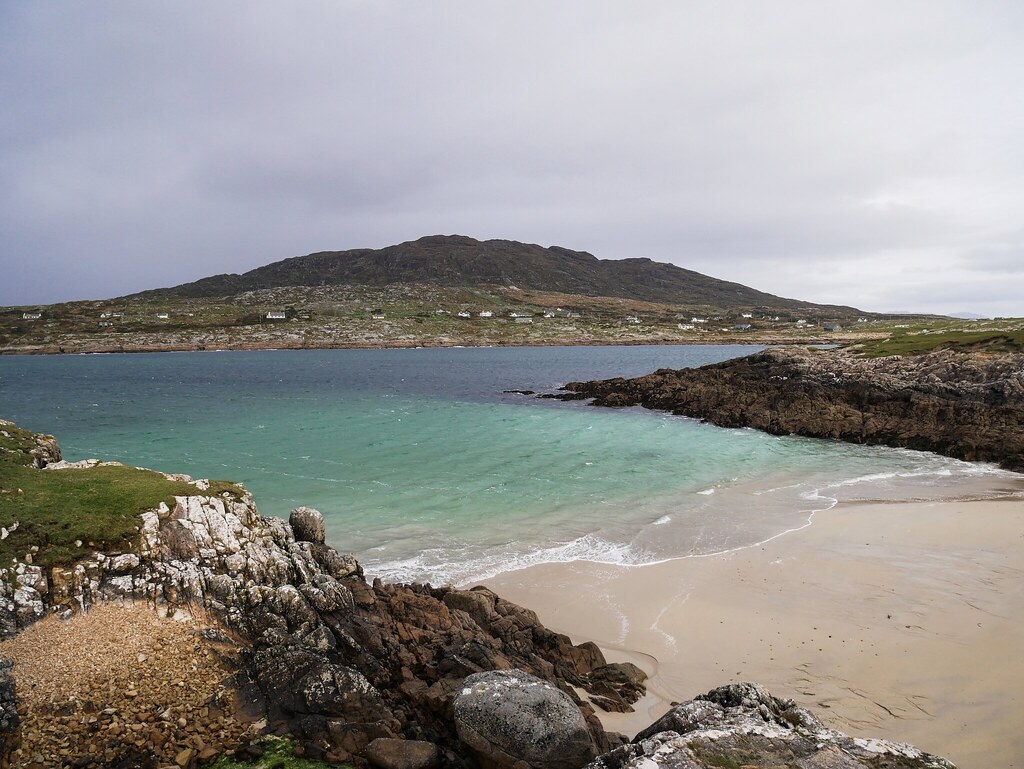 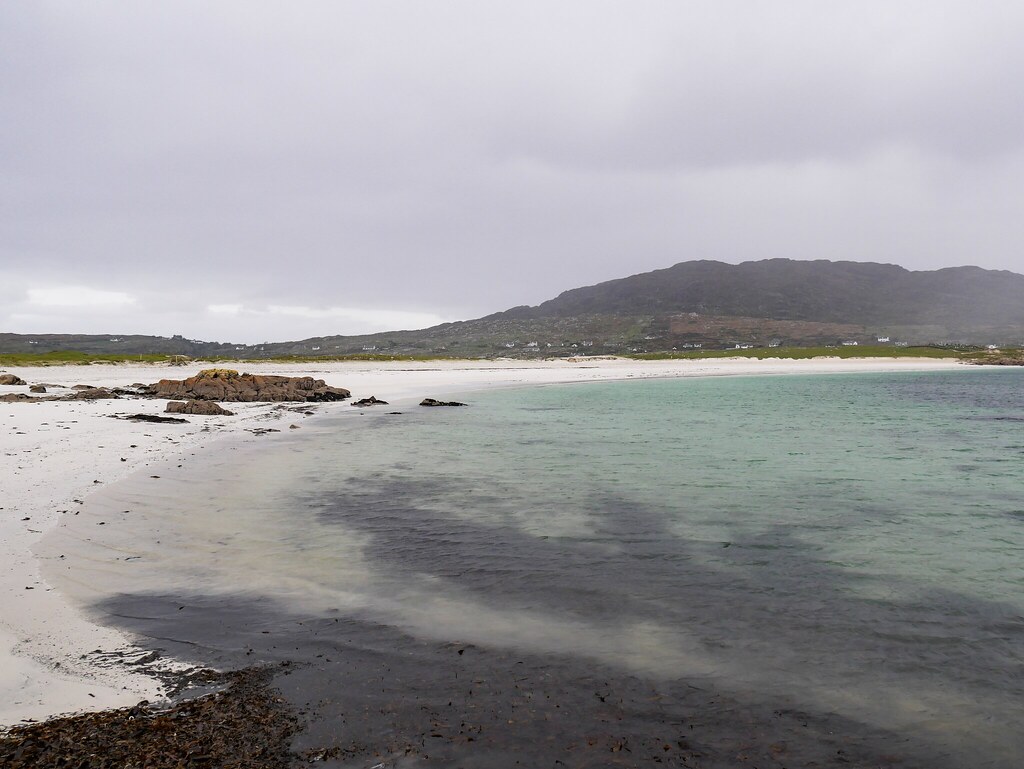 We try our best to avoid cities or anywhere that will have lots of people and stressful traffic. But we made an exception for Galway as it’s only a small city and it’s been voted the European city of culture. From what we read the city was really strict with campervans and motorhome, not only preventing overnight parking/sleeping, but also just day parking. After doing some research it appeared the port allowed motorhomes and it ended up being a good location as it was just a short stroll from the centre. Another reason why we came to Galway today was because a named storm was due to hit us, storm Arwen was expected to bring 110km gusts and we knew we had to be in a sheltered area.

Except for occasional gusts and the odd shower the weather really wasn’t that bad so we set off to have a gander. So many people have recommended Galway to us and I must admit I was a little unimpressed. Don’t get me wrong, it was a nice place but I didn’t get a wow feeling. There were lots of Christmas lights and colourful shop fronts and a few buskers playing traditional instruments. 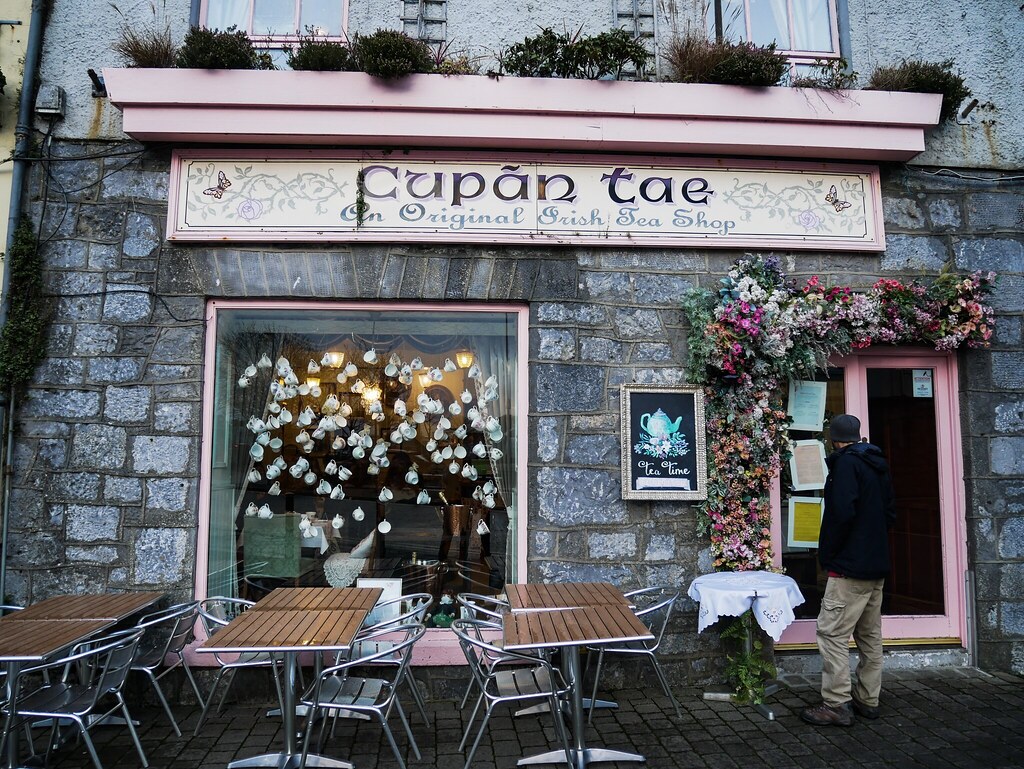 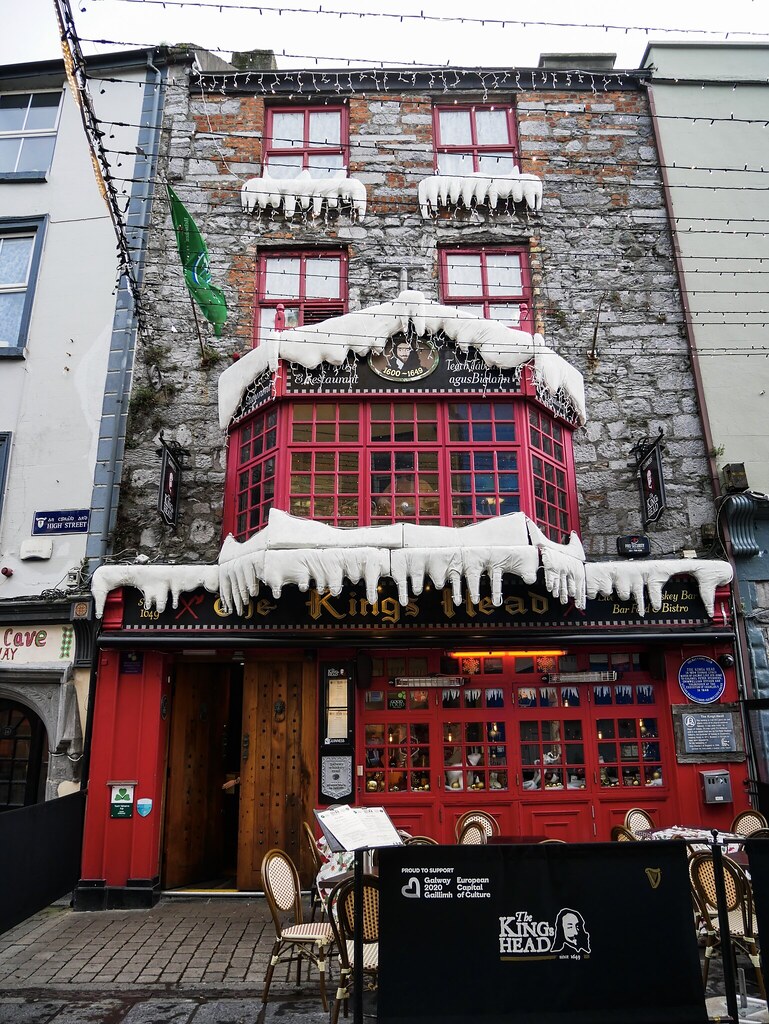 We treated ourselves to our first pizza in 8 months which was delightful and then we headed to a pub for a couple of coffees. Craig opted for an Irish coffee (made with whiskey) and I had a baileys one. Both had cream floating on top and we watched as the bartender made them at great speed. It made us laugh because in England people just don’t know how to make an Irish coffee properly. When I first started waitressing at 17 I was trained to get the cream thick by putting it in a wine measurer with a napkin on top and shaking it frantically. We used to have so many failed attempts where the cream would sink and it would be ruined. Luckily over the years Craig and I have mastered it and trained other staff at work but the Irish make it look as easy as making a quick cup of tea. The coffees were the best liqueur coffees we’ve ever had and they set us up for our next stroll around the city. 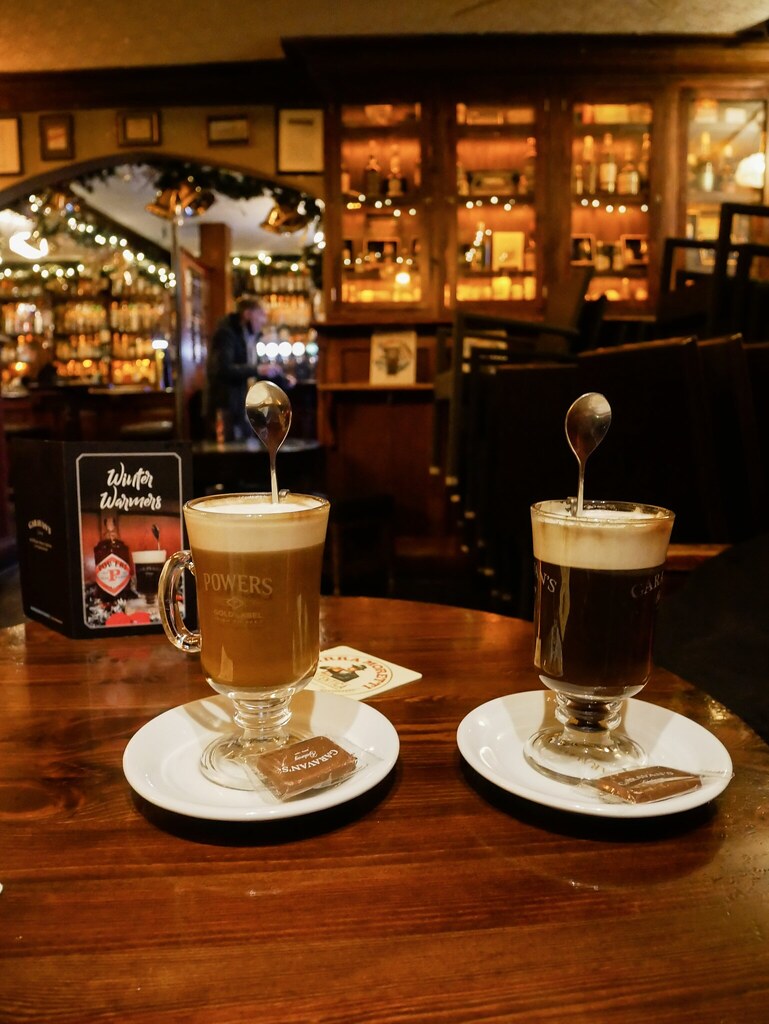 Seeing as Galway is known for its traditional music we made an effort to head to a pub and witness some. The live music starts so late in Ireland, usually at around 9pm and considering we’re in bed by 10 we struggle to stay up that late. Luckily I found a pub that had a session at 5pm so we headed there and nabbed their last table. It was our second live music session in Ireland and this time we had a banjo, fiddle and acoustic guitar. To be honest it wasn’t a very good session, the banjo was way too overpowering and we sort of felt like we were being put into a trance. Plus the musicians looked really grumpy like they didn’t want to be there which was a shame. After a couple of pints we headed off and grabbed a takeaway falafel wrap for dinner. There weren’t really any benches in Galway which was strange and it was also raining so we had to romantically stand in a doorway to eat our dinner. Nearby was the Christmas market which I was quite excited to visit but I think I’ve realised that I’m not that interested in them anymore. We’ve been to quite a few around the world and they just sell overpriced junk. So we headed back into town to try and catch another music session but all the pubs were full and not accepting anyone else. To be honest I was quite happy about that, it was 9:30pm and the festive day shoppers had been replaced with groups of drunk lads. I didn’t want to feel uncomfortable in a busy bar with covid still rife so we decided to call it a night and head back to Helga. Overall it was a nice change but boy were we excited to get back into nature. 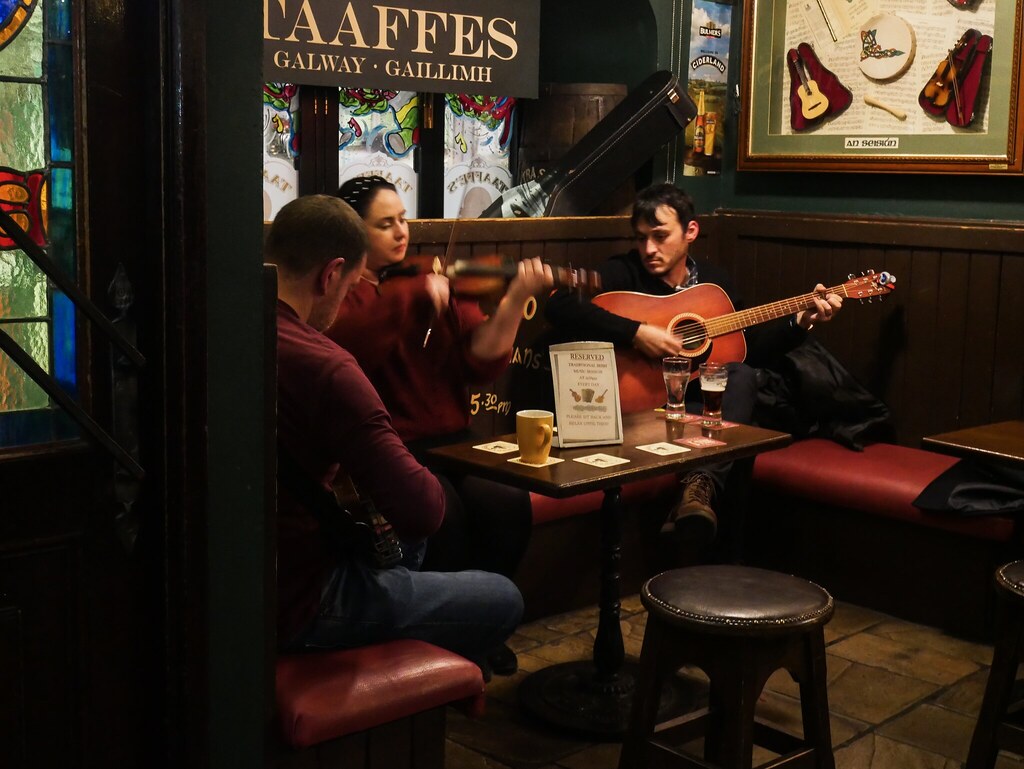