It was still dark when we woke up and the cold temperatures meant our breath was visible like smoke. But that didn’t bother us, the sky was filled with stars and we knew it was going to be the best weather day so far. There wasn’t an exciting sunrise as the sky was cloudless but a pastel pink hue filled the horizon, slowly turning into a milky blue. The grass was crispy and frozen and the lakes were all steaming, it was a really magical morning. We didn’t last long on our drive before we had to stop and take photos. The sun was beaming across the mountain tops and turning them terracotta orange. As if that wasn’t pretty enough the mountains were perfectly reflected in the water. We’d made an impromptu plan to do an 8 hour hike to the 12 Bens but it was a bit of a drive away and we soon realised we’d be pushing it late and would be hiking back in darkness. So instead we tried to see as many scenic sights in the good weather as possible. We were on the edge of Connemara National Park, a wilderness area with an abundance of mountains yet very few hiking trails. 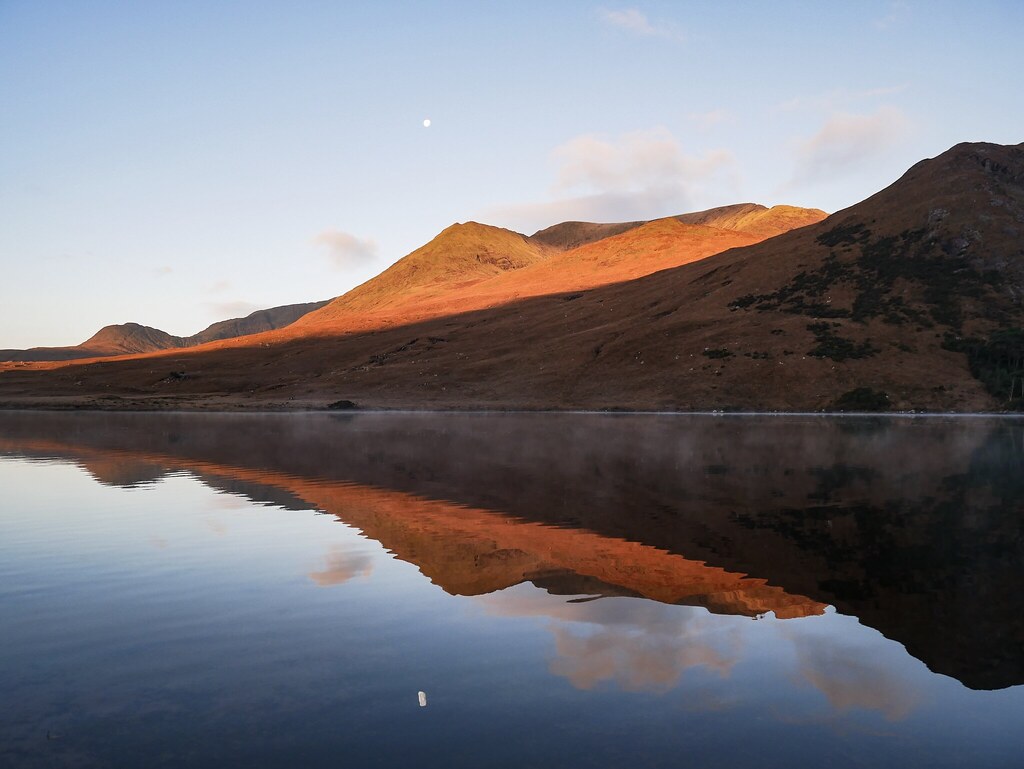 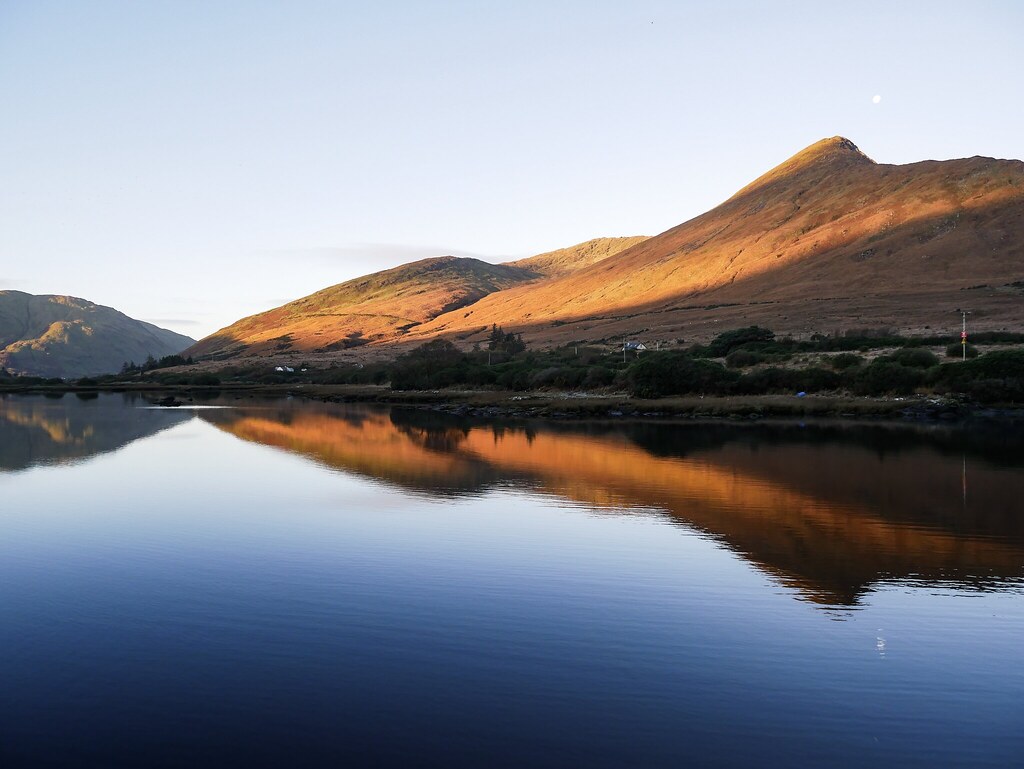 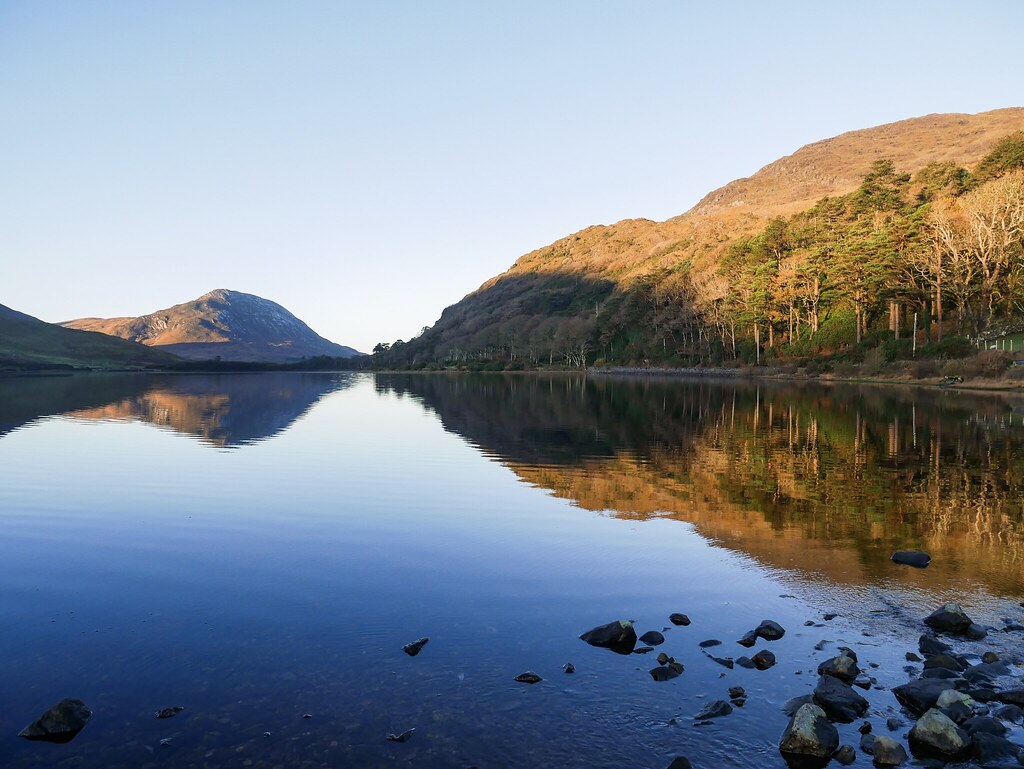 Our first stop was Kylemore Abbey, a stunning building that looks like a fairytale castle. Built in 1867 and home to a Benedictine order of Nuns for the past 100 years. It was set on the shores of a steaming lake and nestled beneath a tall forested hill. It was such a perfect morning to photograph the abbey as it was reflected in the lake, in fact the scene looked more like a castle in Germany than Ireland. 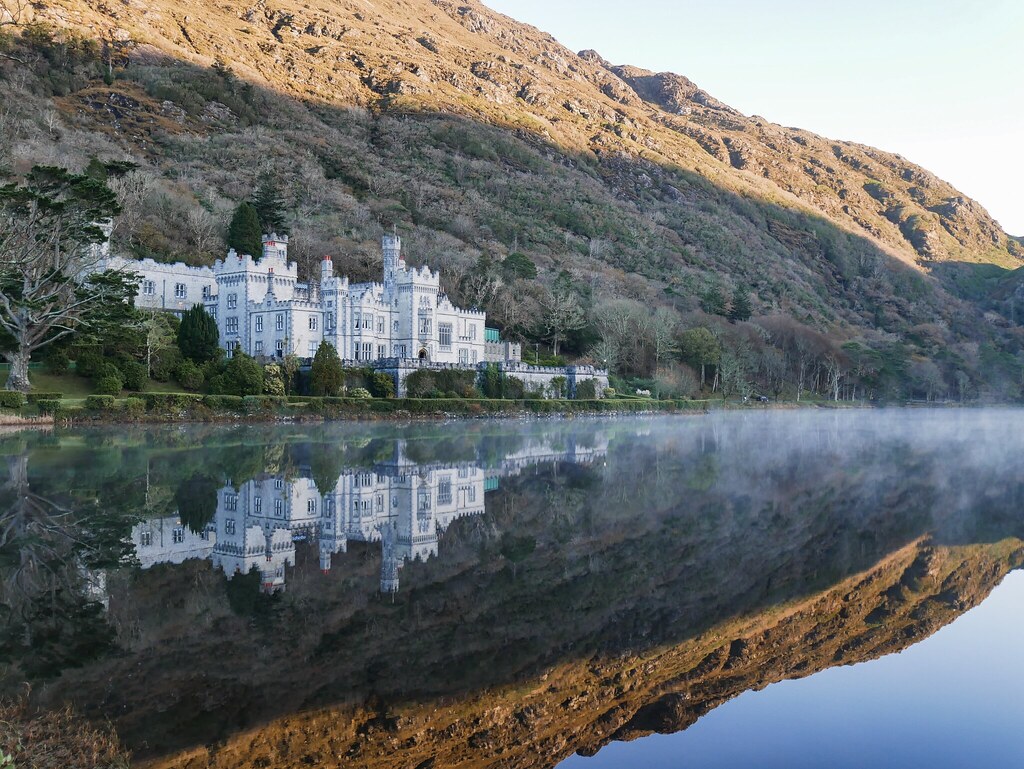 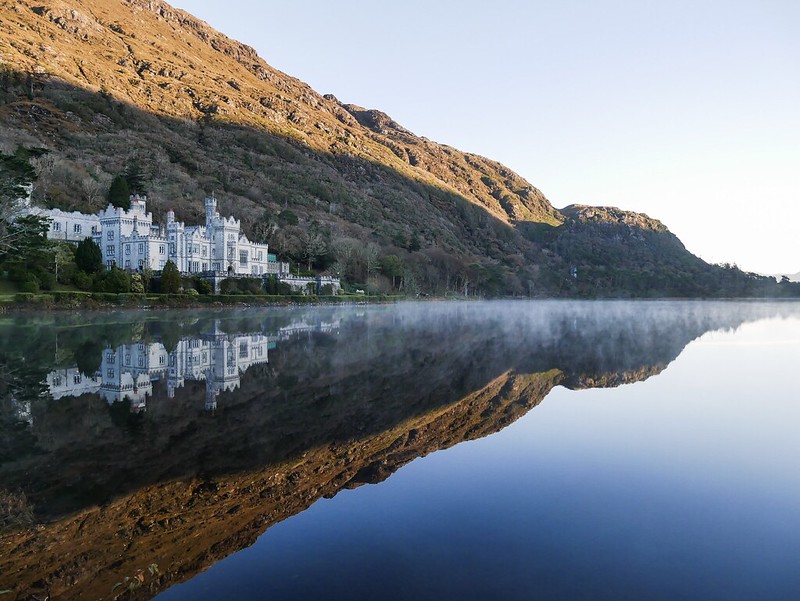 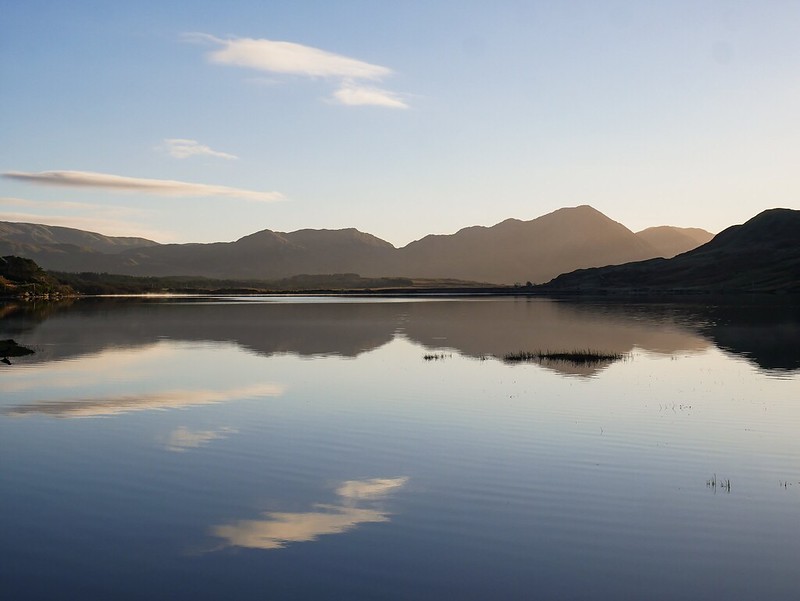 A few kilometres down the road was the trail up Diamond Hill, said to be a very popular hike. As we set off a worker in the visitor centre told us the main trail up diamond hill was closed. I was gutted, we’d said no to the 12 Bens and now we couldn’t even do this hike. I asked the worker why it was closed and she dramatically said “there’s potholes and crevasses!” We hiked the first section anyway and when we reached the closed off point we saw a few men working on the trail. I figured I may as well ask them if there was any other route we could take or any chance we could walk around the zone where they were working. They basically told us that they couldn’t say yes, which was a cryptic way of telling us it’s fine to go through but if we have an accident or anyone asked how we got there we had to say we weren’t given permission, which suited us just fine and we were very happy to continue the hike. Best of all we had this popular sight all to ourselves! We followed a well built path up to the top of Diamond Hill which stands at just 442m but offers superb views of the surrounding mountains, sea and islands. 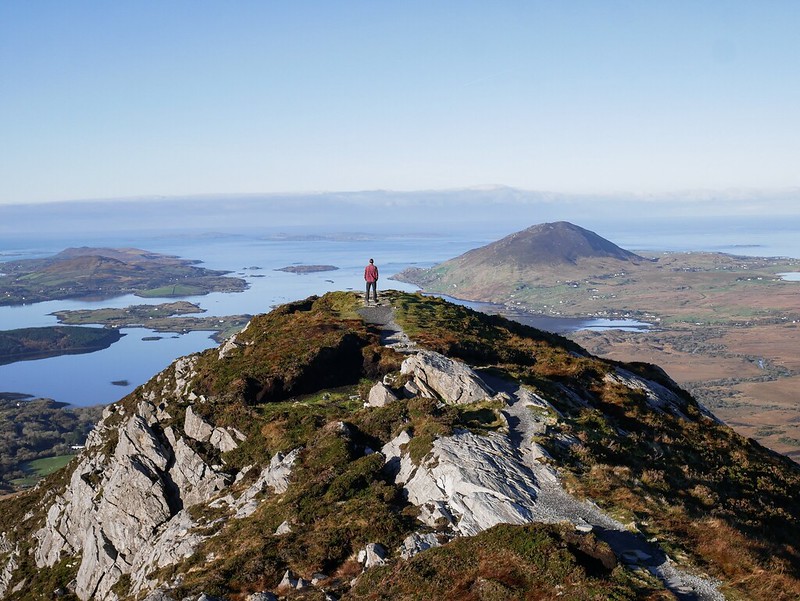 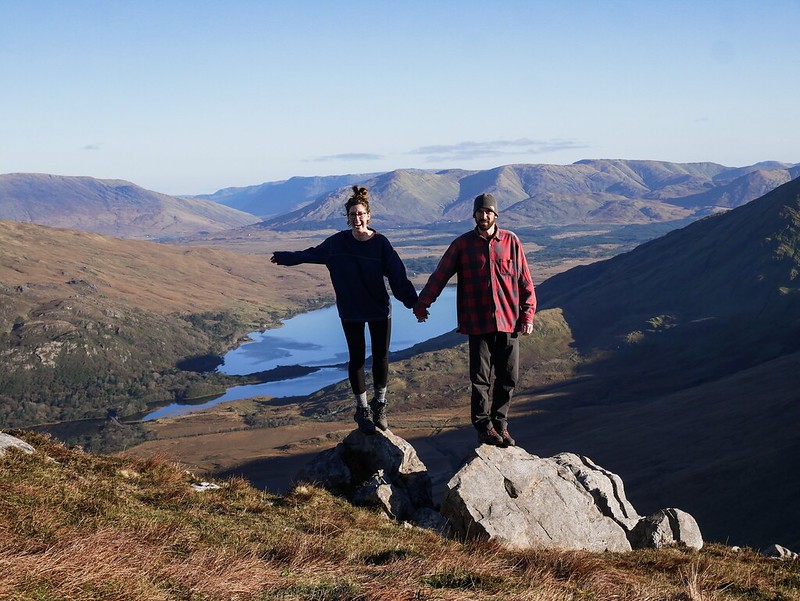 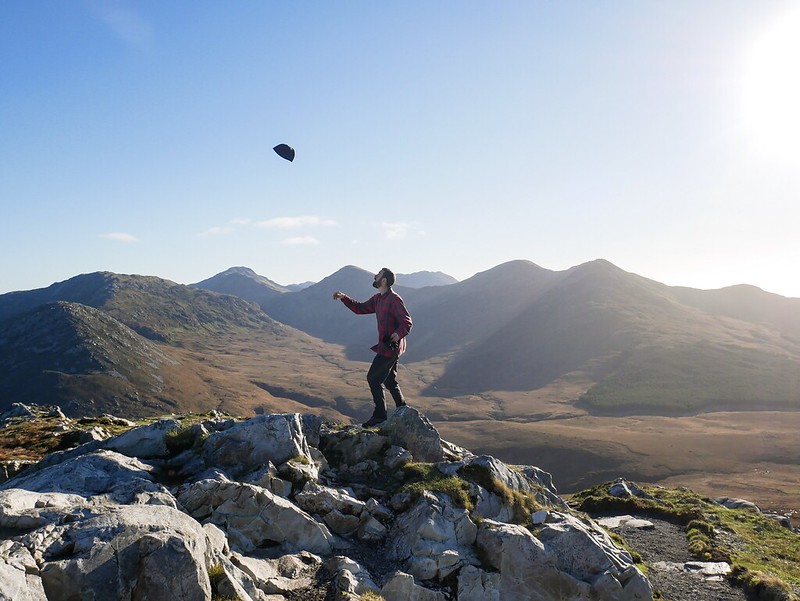 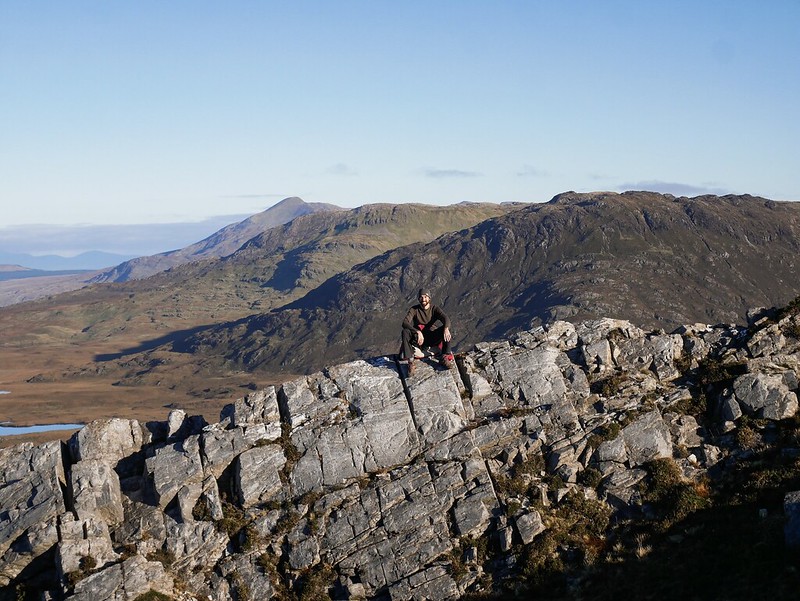 By the time we got back down we noticed a few other people were on their way up so we weren’t the only ones to ask the workers if we could go through. And you’ll be pleased to know that we didn’t pass a single pothole or crevasse like the lady in the visitor centre had said! Boy was that a big fat lie, the trail was just having some maintenance in two different locations which could easily be walked around. 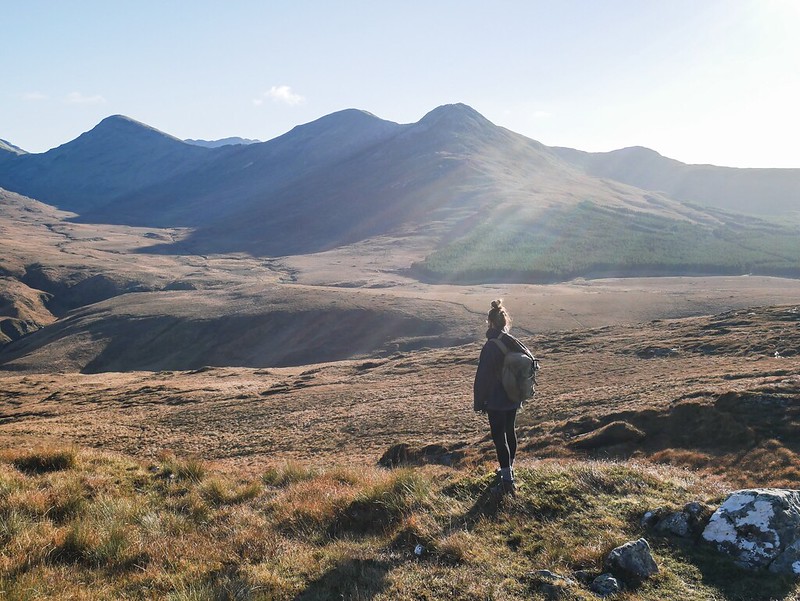 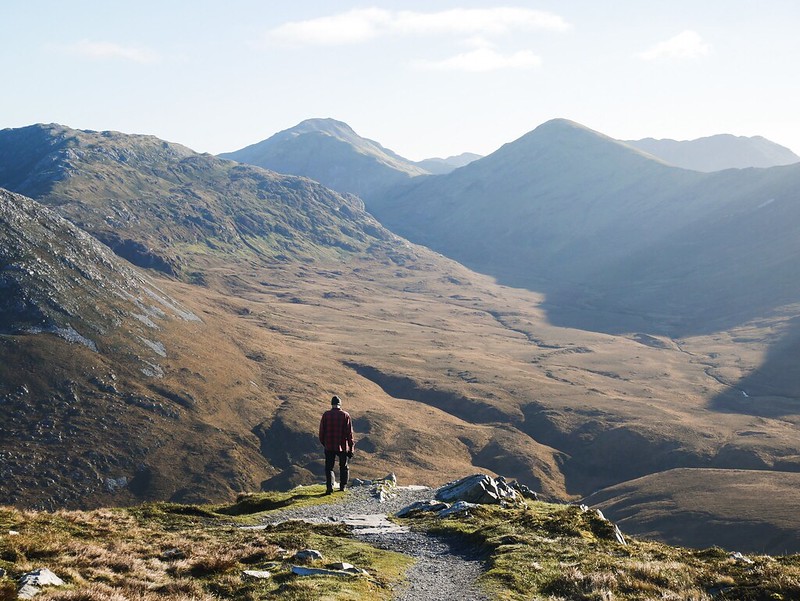 The sun was still beaming down on us so we decided to head back on ourselves a little to the only fjord in Ireland, Killary Fjord. On the way we couldn’t resist stopping at Kylemore Abbey again to see it lit up by the sun. We stopped for lunch at a stunning little lay-by beside a lake with a mountain backdrop. The fjord was a bit of a strange place to visit, we drove alongside it this morning but we wanted to explore a different area on foot. To get there we followed a horrible single track road with barely a passing place in sight and we pulled up in a tiny pull out near a sheep farm. The sheep were all roaming the steep grassy slopes beside the road and below them were the royal blue waters of the fjord. Mountains lined the shores of the inlet and the water was as flat as a pancake. A fishing boat chugged towards us, creating a fanned ripple of water behind it. It was a really beautiful spot but it would be even prettier if there weren’t nets and containers in the water from some sort of shellfish farming. 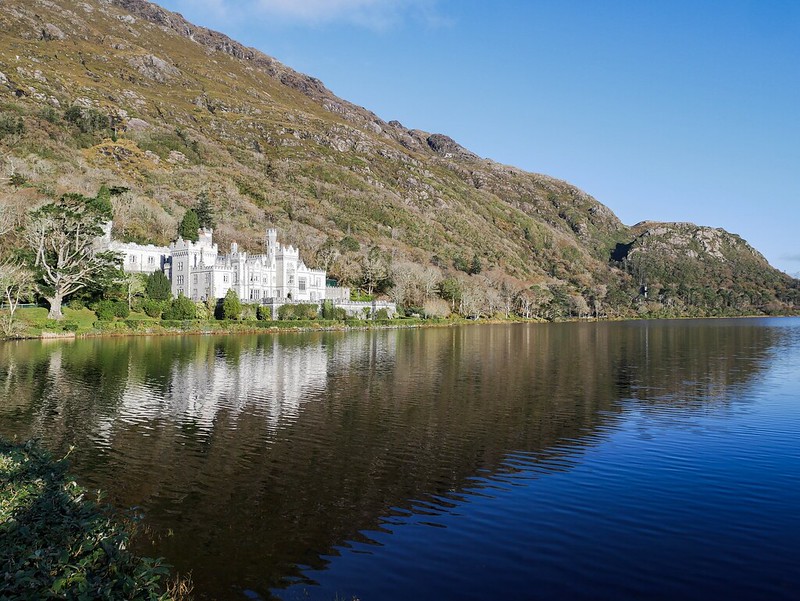 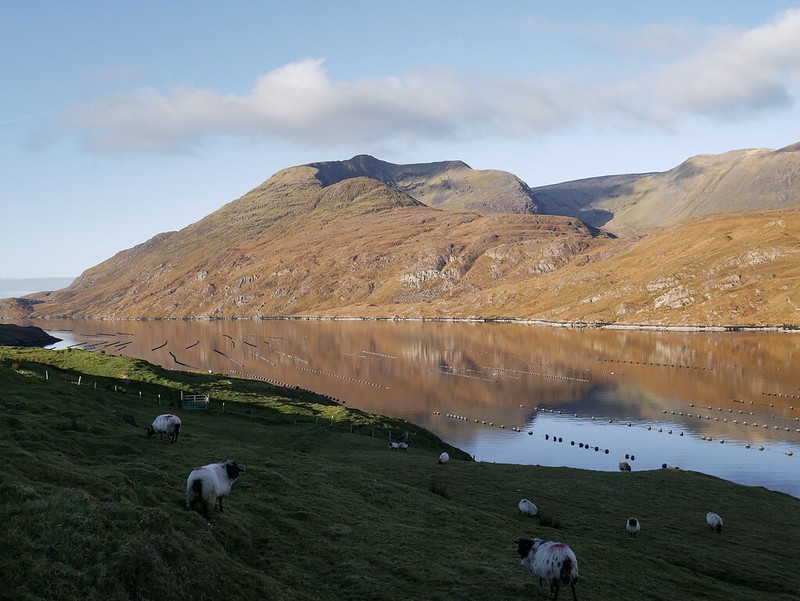 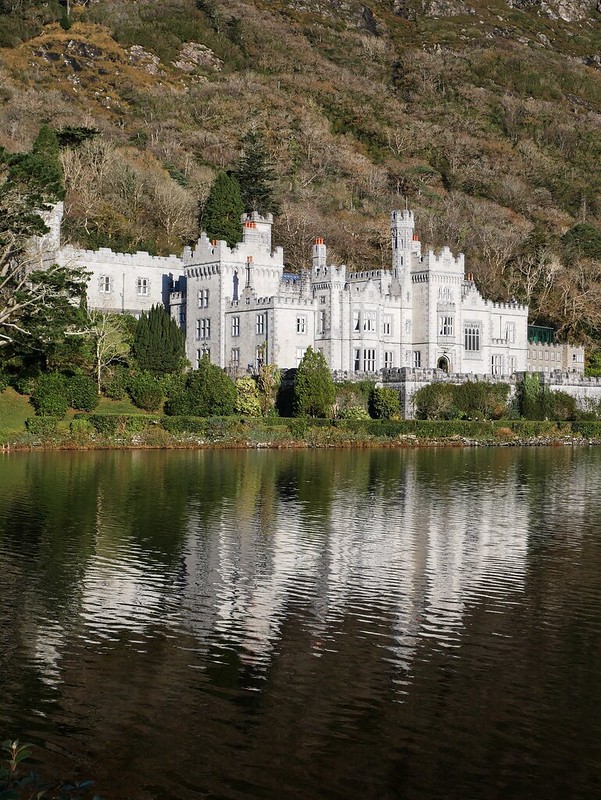 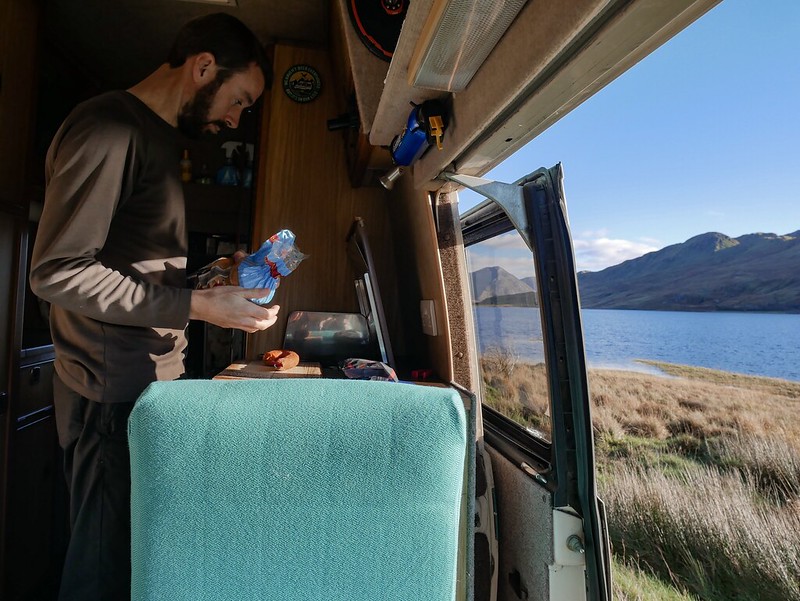 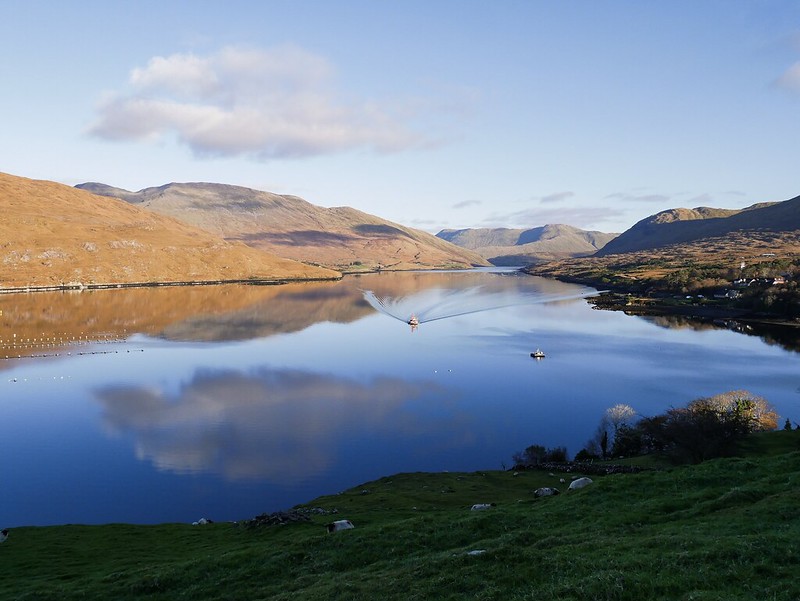 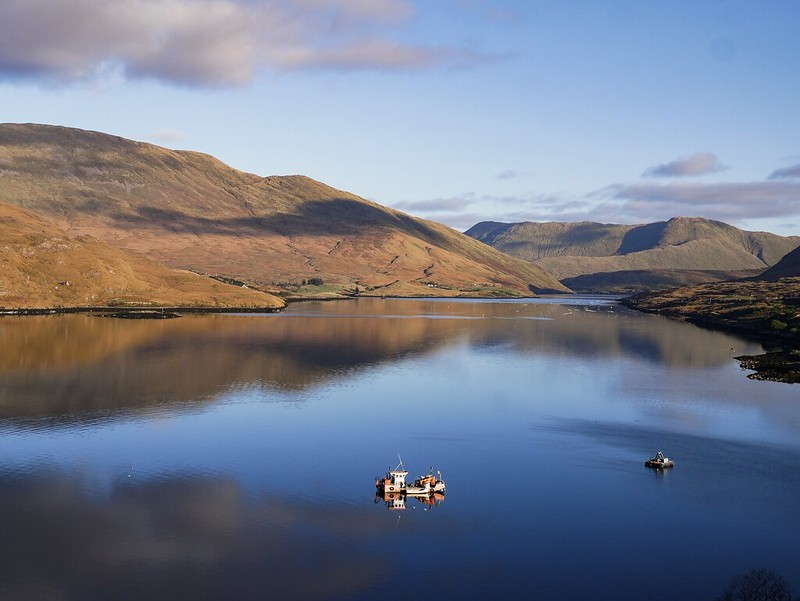 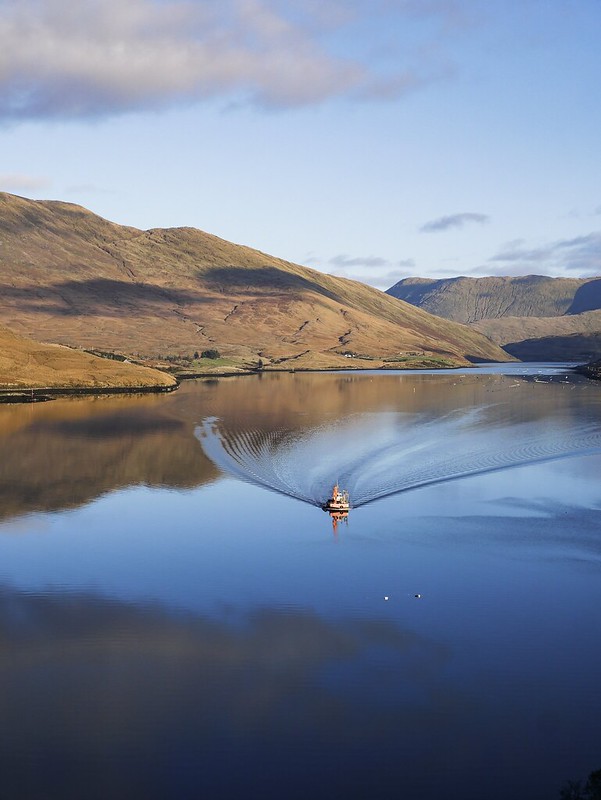 We didn’t stay for too long as we wanted to try and see Glassilaun beach before the sun went down. It’s said to be one of the best beaches in Ireland so we headed out for a stroll along the white sand. I could see how it got such a high rating, it wasn’t just a beautiful curved bay with clear water but it also had some pretty big mountains right behind it. The sun was already quite low so the sea didn’t look turquoise like it would in the summer light. Our shadows were cast on the sand, stretching our bodies so we looked like a circus act on stilts. We packed a flask of tea with us and our plan was to walk across to some rocks which might give us the vantage point we needed to see the clear water. As we began climbing over seaweed covered rocks a local asked us where we were heading. He was collecting periwinkles and said the tide was coming in fast and that we wouldn’t make it to the rock in time. Craig was sceptical but we had to heed his advice so we just went up a rocky area where we were, sat down and opened the flask to find Craig forgot to put teabags in it. He literally made a flask of hot water and milk powder. It was pretty crazy watching how fast the tide was coming in and we realised we had to make a move. A quick look on google earth showed us we weren’t just sat on rocks, they were actually islands! By the time we walked back a river had formed across the sandy spit and the water was almost a foot deep so we had to take off our boots and wade through. I made sure to call back to the periwinkle man and thank him for the warning, we’d of made it back but we may of had to walk back in our underwear with my backpack on my head. 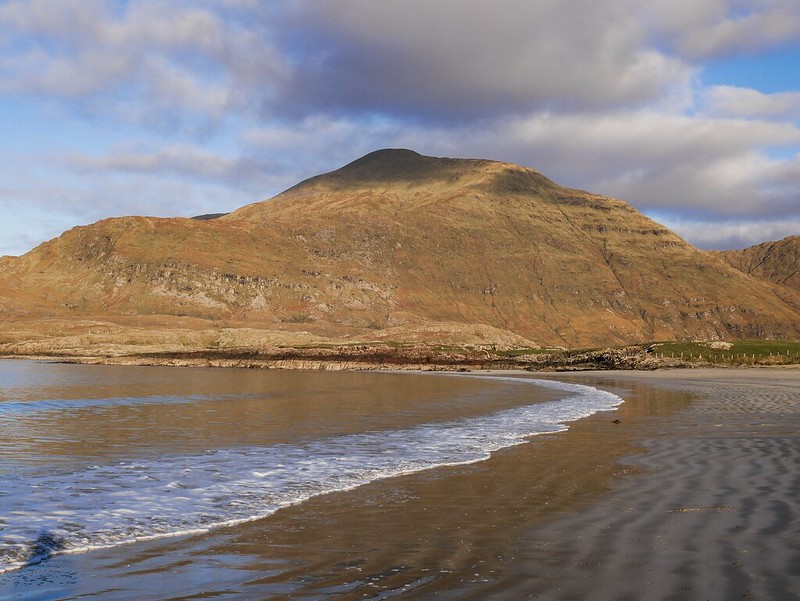 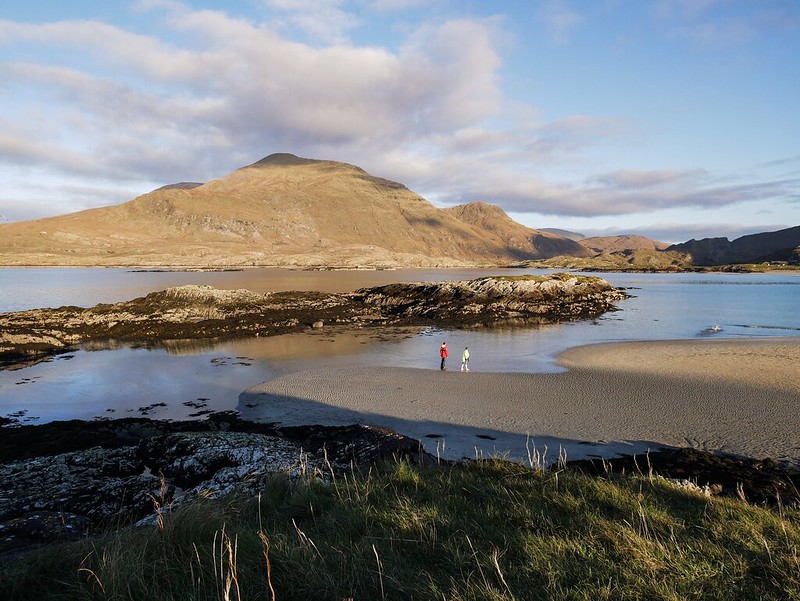 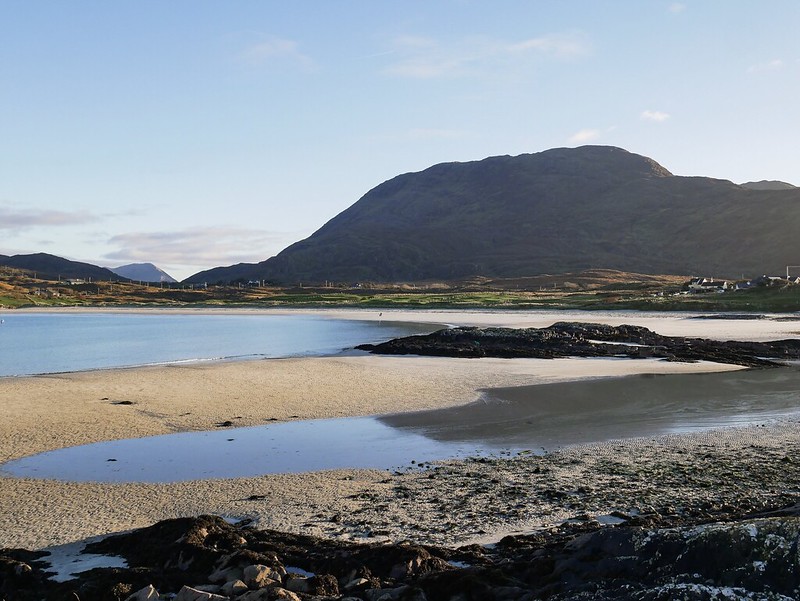 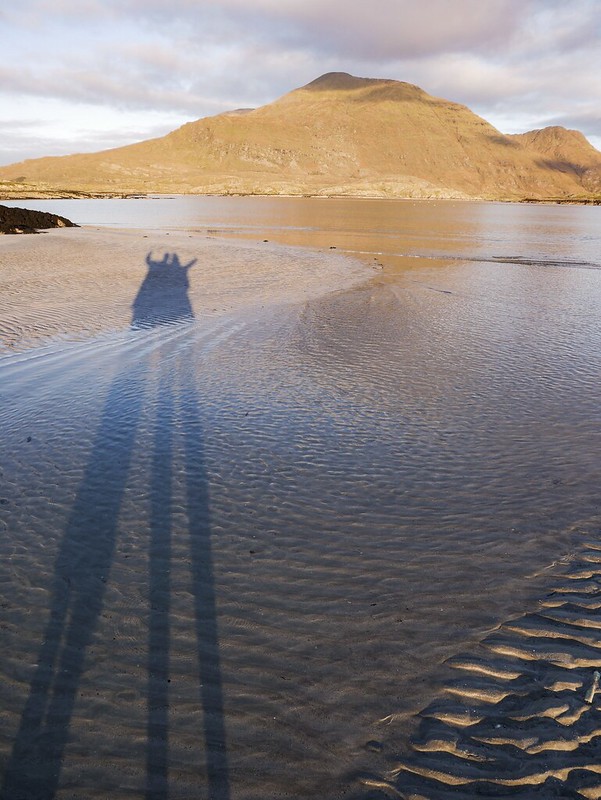 It wasn’t the best place to watch the sunset so we drove to the next beach where we had a similar issue but it wasn’t a big deal as it had clouded over considerably. At dusk we set off to find a place to camp and we found an idyllic spot beside a very quiet country lane and a lake which was black and glassy. We were both feeling rather shattered after our long day of adventures but very grateful for a full day of sun and no wind. 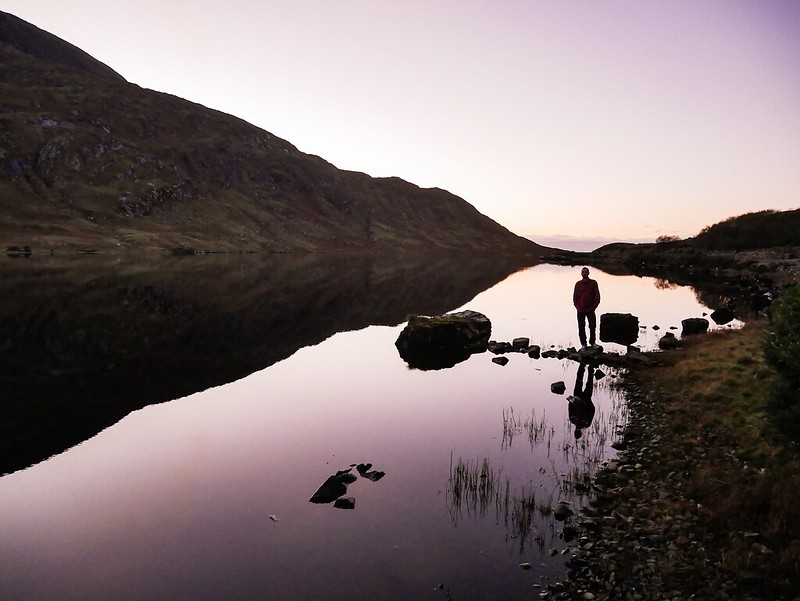