Our adventures in Sligo were a little delayed after we accidentally took a wrong turn and went 25km in the wrong direction. Craig blamed me as I’m the navigator but I was quick to investigate the situation. Besides, I had another 25km of sitting there like a lemon to get back to our junction to figure out where we went wrong. I announced that I was taking back my 95% of the blame and downgrading it to 50% because Craig took a left hand turn at a roundabout and didn’t go straight over as I’d told him to do. He also lied that he followed a sign to Sligo but upon returning to the roundabout it became evident that he was talking absolute shit. So, with 50km of expensive fuel down the drain we were finally on our way. 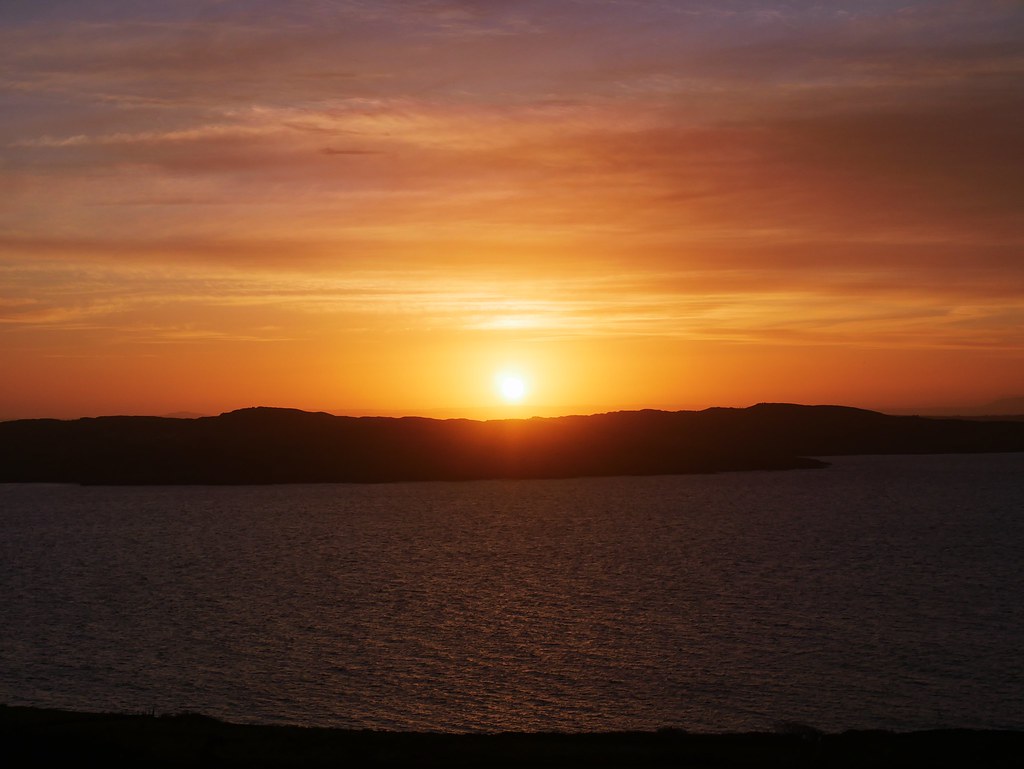 Our first sights were along the scenic coastal road on the Mullaghmore headland. We pulled over when we reached the tip of the headland and noticed huge rolling waves. They were fascinating to watch and to add to the excitement a body boarder came along and was soon riding through the wave tunnels. We enjoyed lunch with a view and then we continued our journey. Classiebawn castle soon appeared ahead of us, it was a grand country house sitting on a chunk of land beside the sea. Behind the castle was Benbulbin, one of Ireland’s most famous mountains. It has a flat top and creased sides like a big banquet table with a draped cloth hanging over it. Sadly it was a really hazy day so we could only see an outline of it, but on the plus side we had some really cool clouds in the sky that looked like tiger stripes. 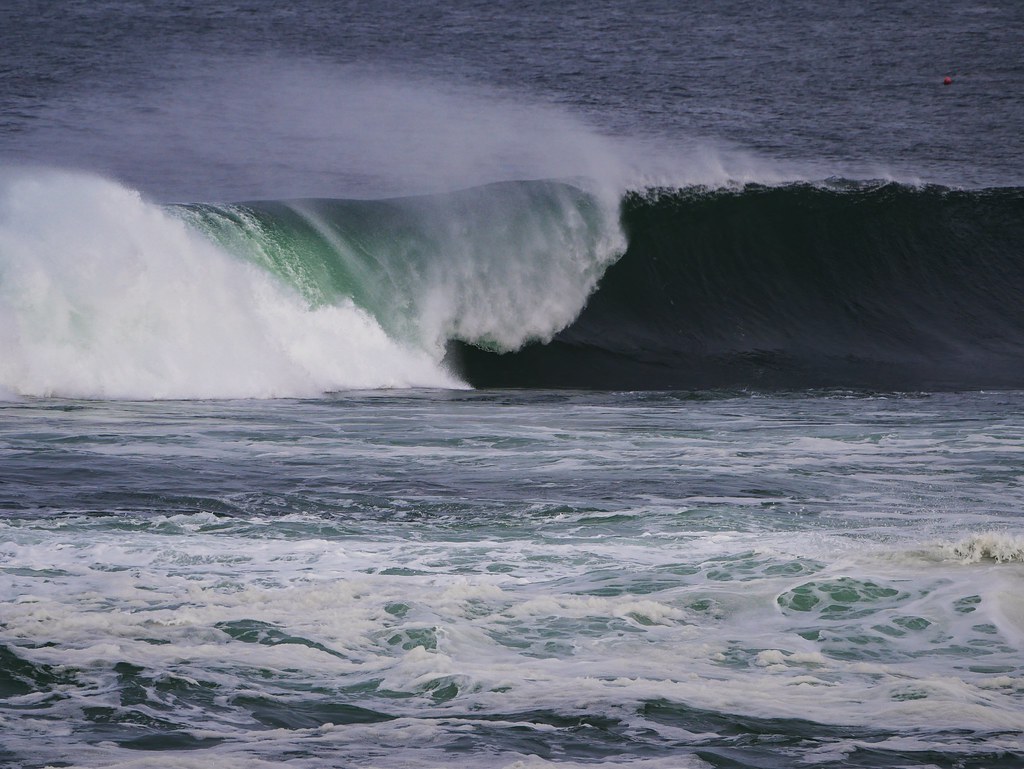 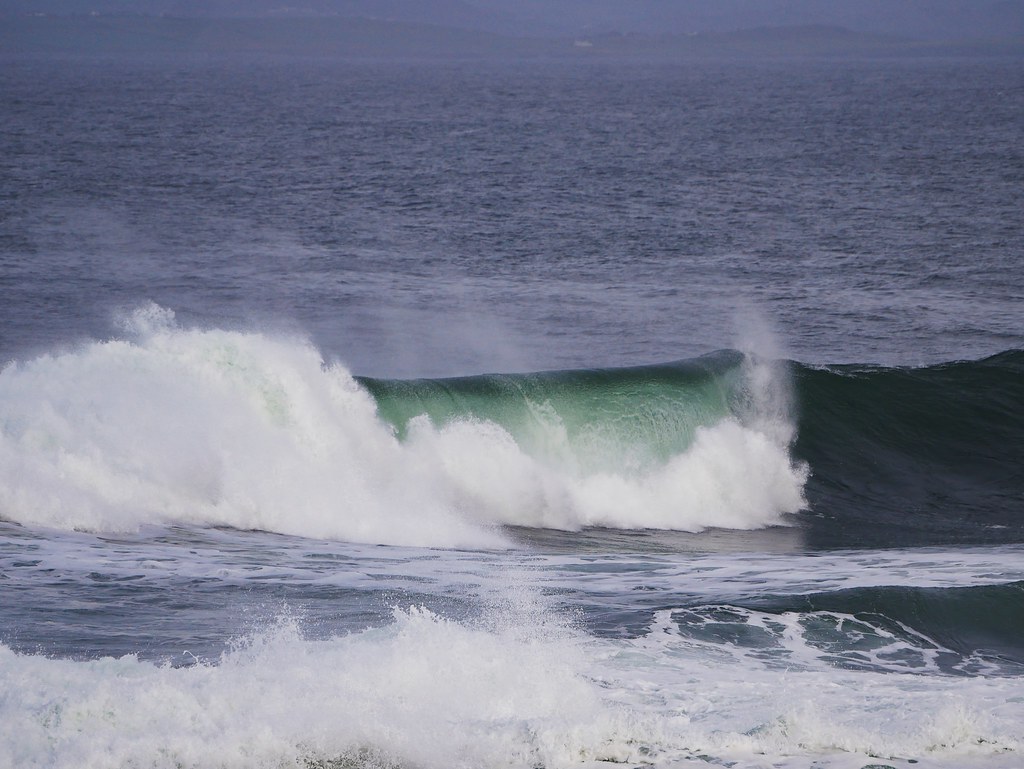 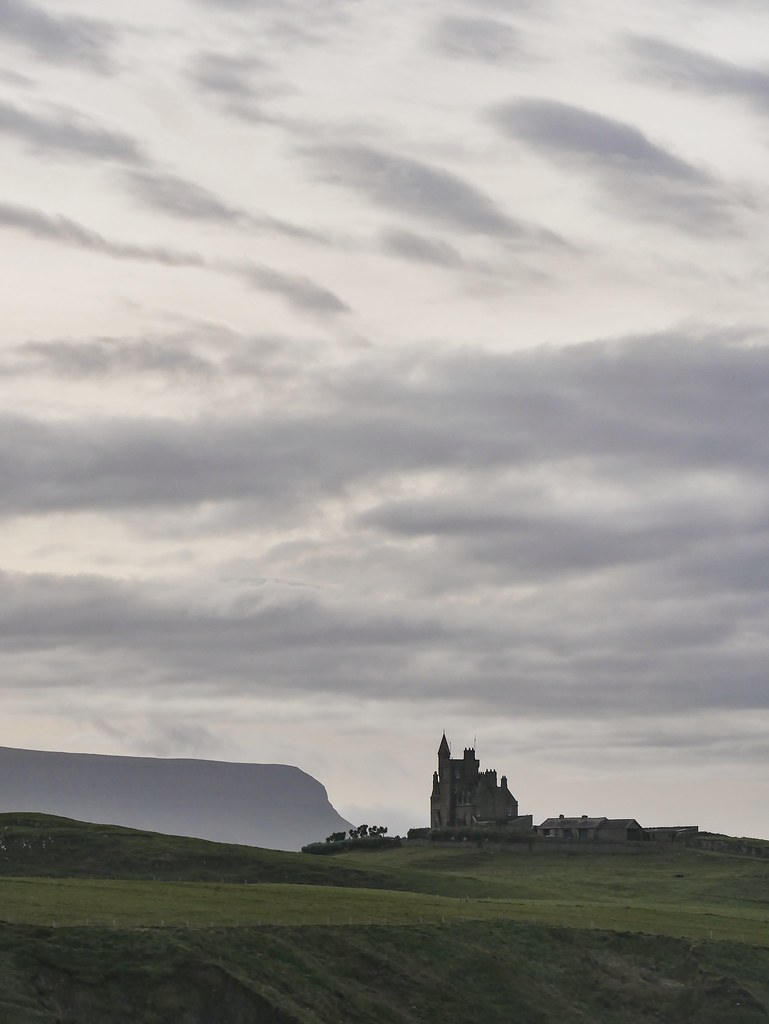 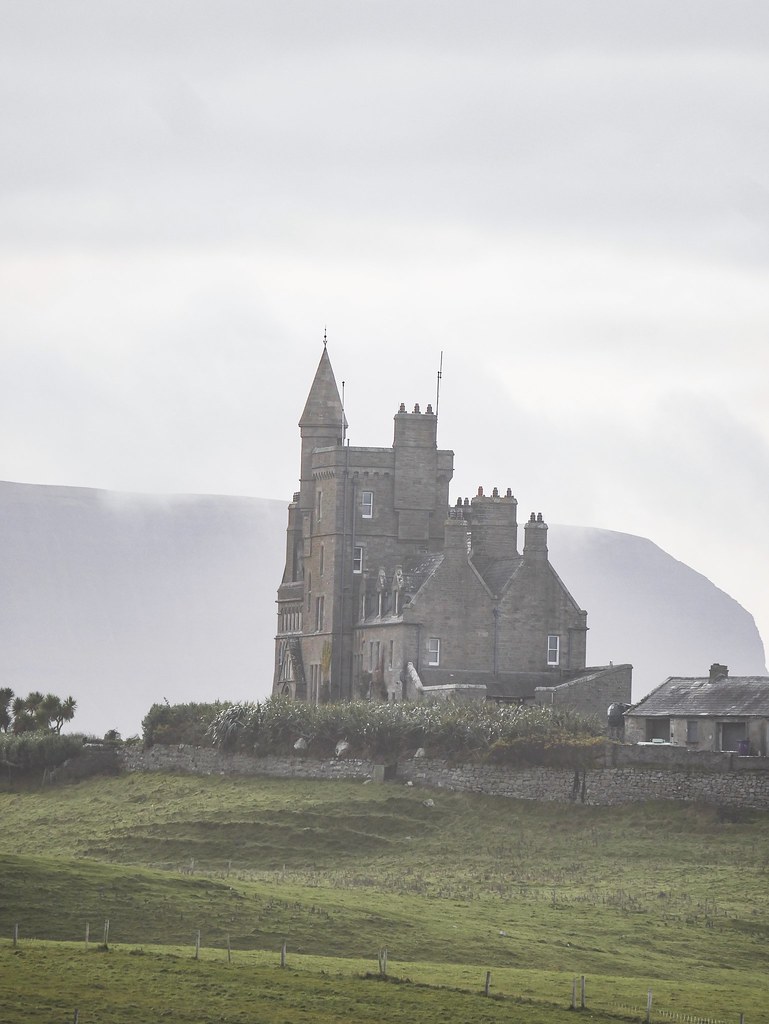 We were actually heading towards Benbulbin now to take the scenic Gleniff Horseshoe Drive so it meant we got much better views as the haze cleared when we got closer. The route was a 9km single track road that offered fab views of the interesting grassy-sided mountains that rise up like cliffs. Straight away we were treated to a view of Benwiskin, a mountain shaped exactly like a witches hat and luckily it was quiet enough for us to stop on the road so I could take some pictures. As we drove further down the road the mountain seemed to shape-shift and lose it’s witchy shape. 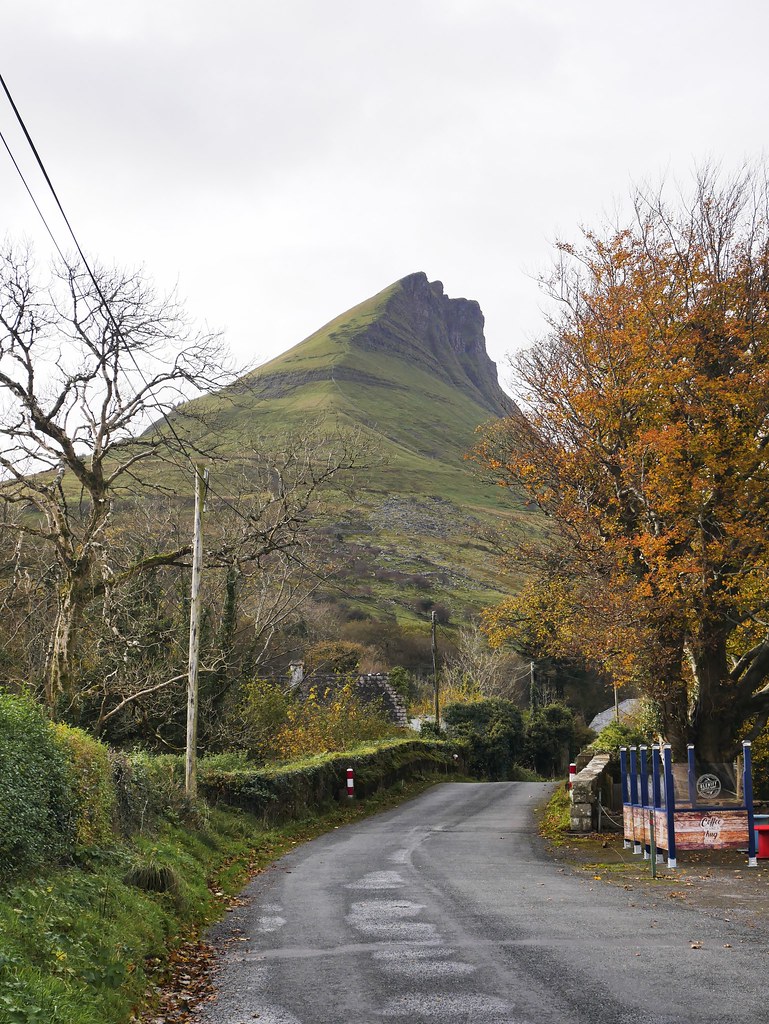 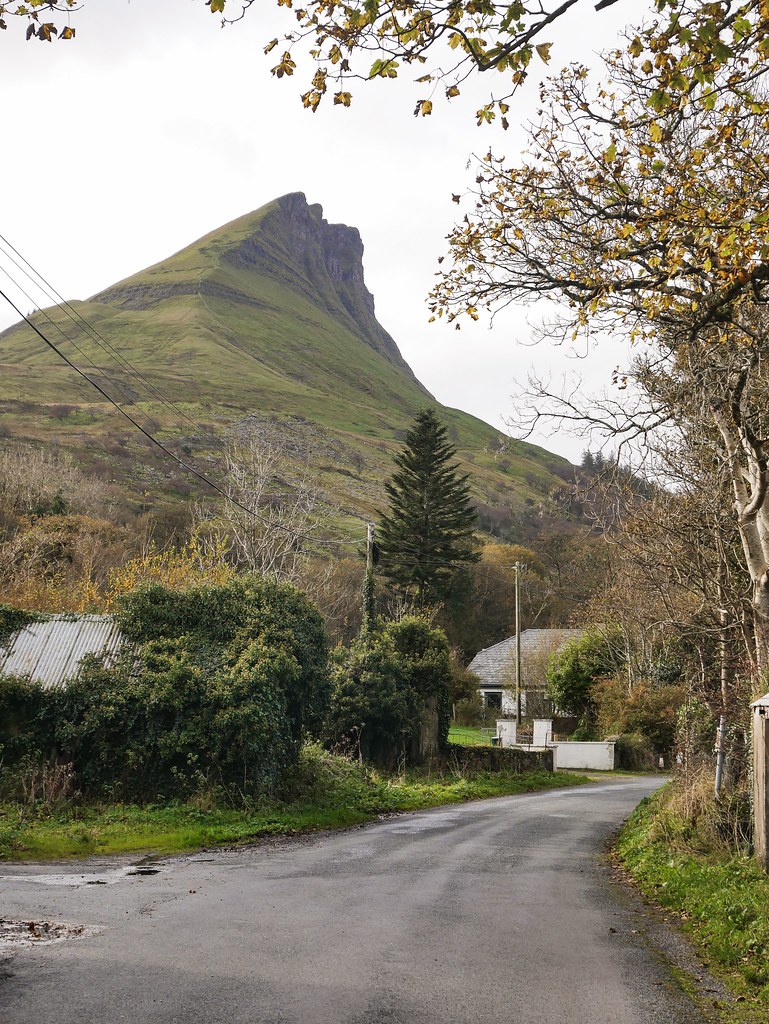 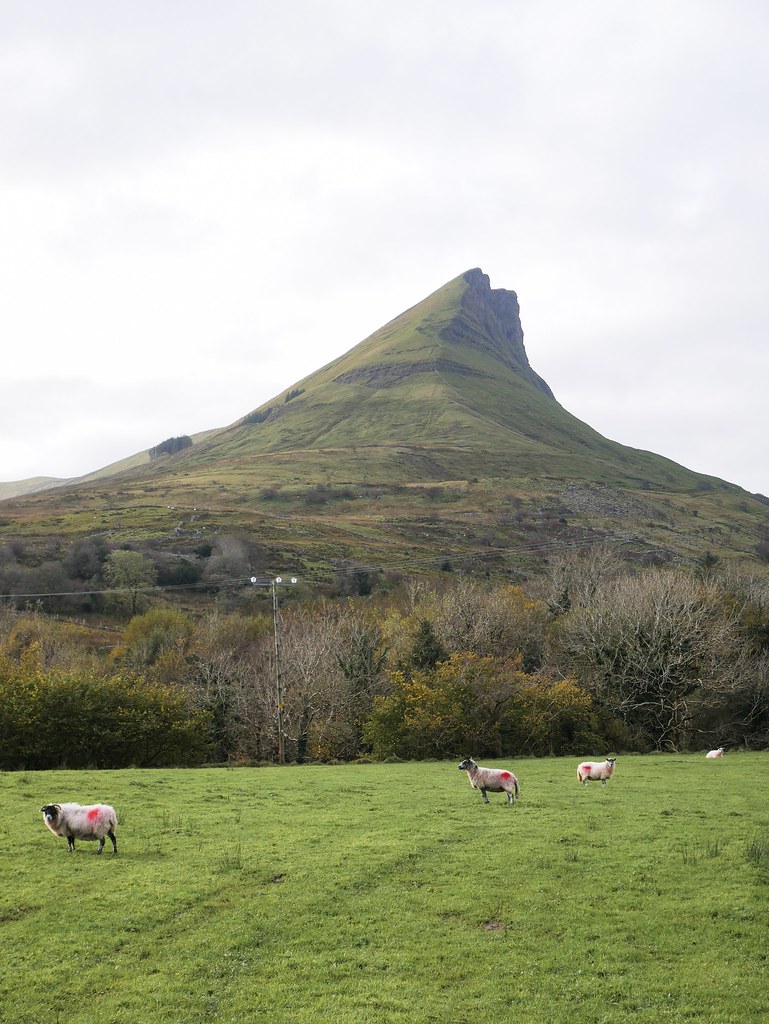 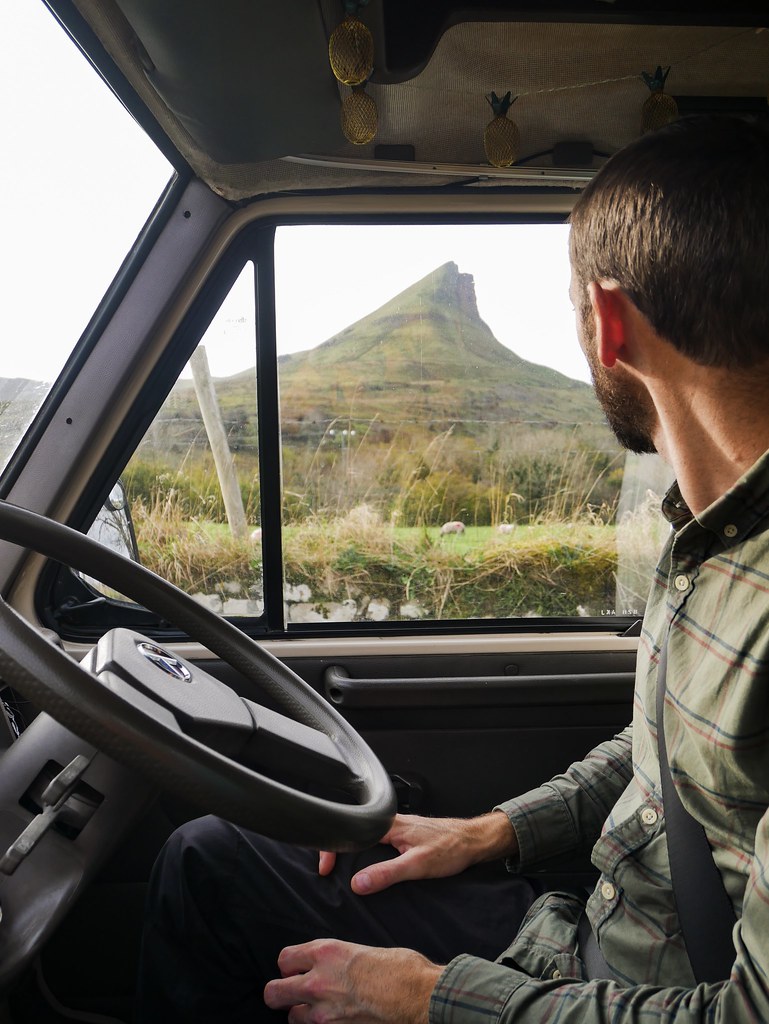 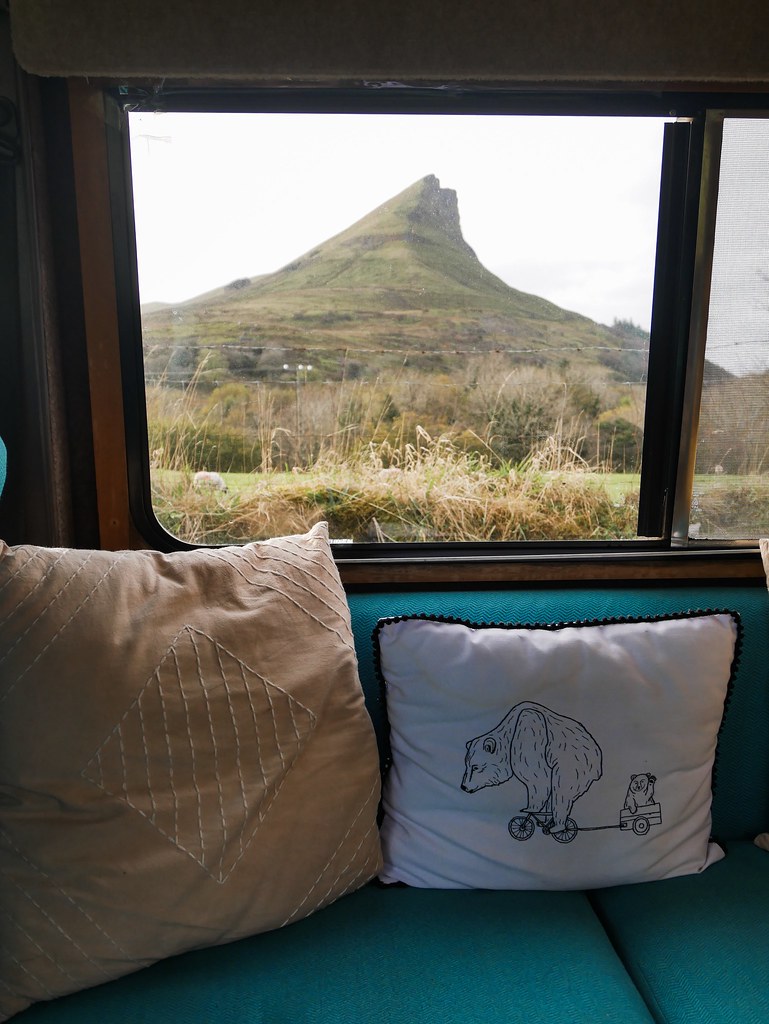 Our next stop on the road was a gps coordinate where I’d marked a ‘Magic Road’ as they’re called in Ireland. Apparently there’s a few around the country and if you stop your car on a hill, put it into neutral and take the handbrake off, the car will be pushed up hill by fairies. We had to try it for ourselves so we went to the exact coordinates and low and behold we began very slowly moving up the hill. I was sold, fairies exist in Ireland and no one could tell me otherwise! Craig, however, wanted to look at it from a scientific approach and was adamant that there was a minor dip before the hill. So we tried again in a slightly different spot and we didn’t move. Just for good measure we tried it one more time and just like our first try, we defeated the odds of gravity and rolled up hill. So two out of three attempts leads to the conclusion that fairies did in fact push us up the hill. We’ll have to try another one in Ireland, someone actually contacted me and said there’s one in America near a children’s cemetery and sometimes people find kids hand prints on the back of their car as if kids were pushing them uphill…sounded bloody terrifying to me. 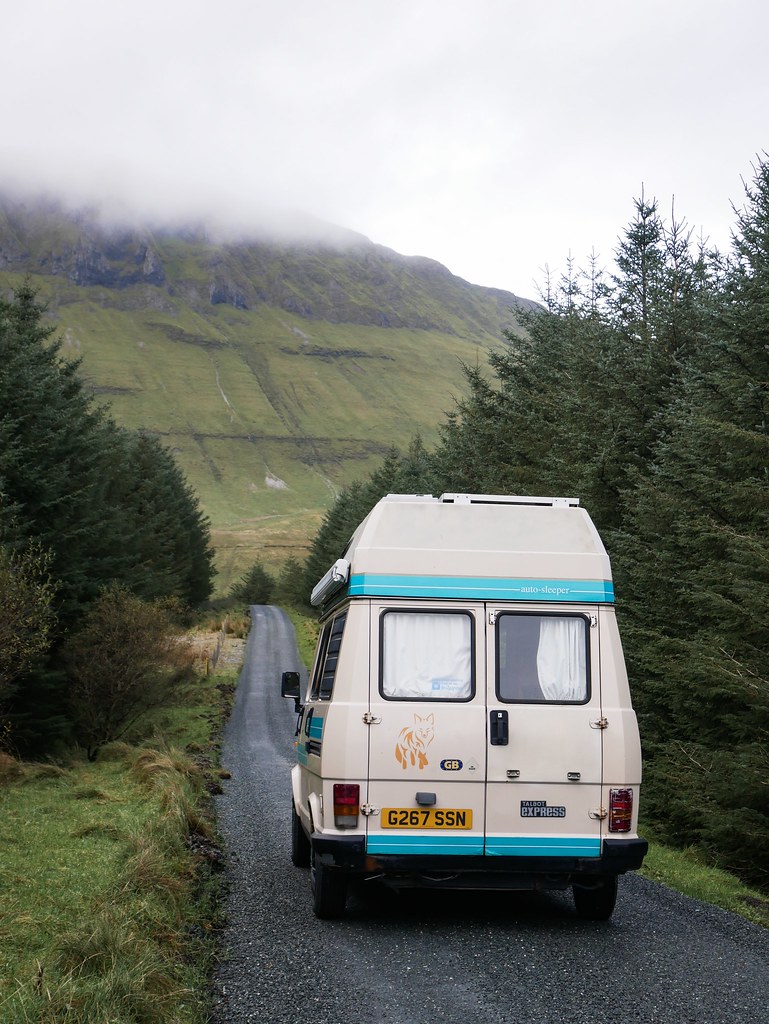 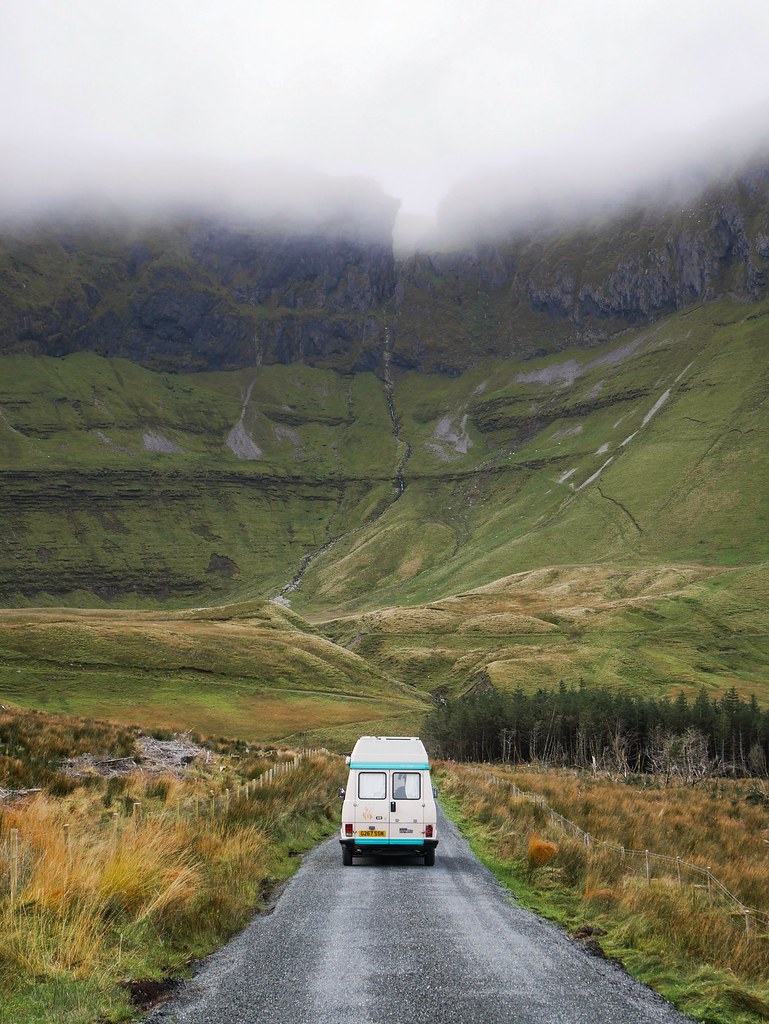 After that rather funny experiment we continued on the drive and as we rounded a bend our jaws dropped as we saw a huge wall of green cliffs ahead of us. It was an incredible sight and Helga looked so tiny driving along the road towards the bottom of the hill. The top of the mountain had low cloud clinging to it which was enough to put us off a hike to the top, which was probably a good thing as it appeared like the route went through farmers land with strict no trespassing signs. After the very scenic loop drive we continued on the country lanes to Benbulben Forest where we set off on a short walk parallel to the fascinating table-top mountain. 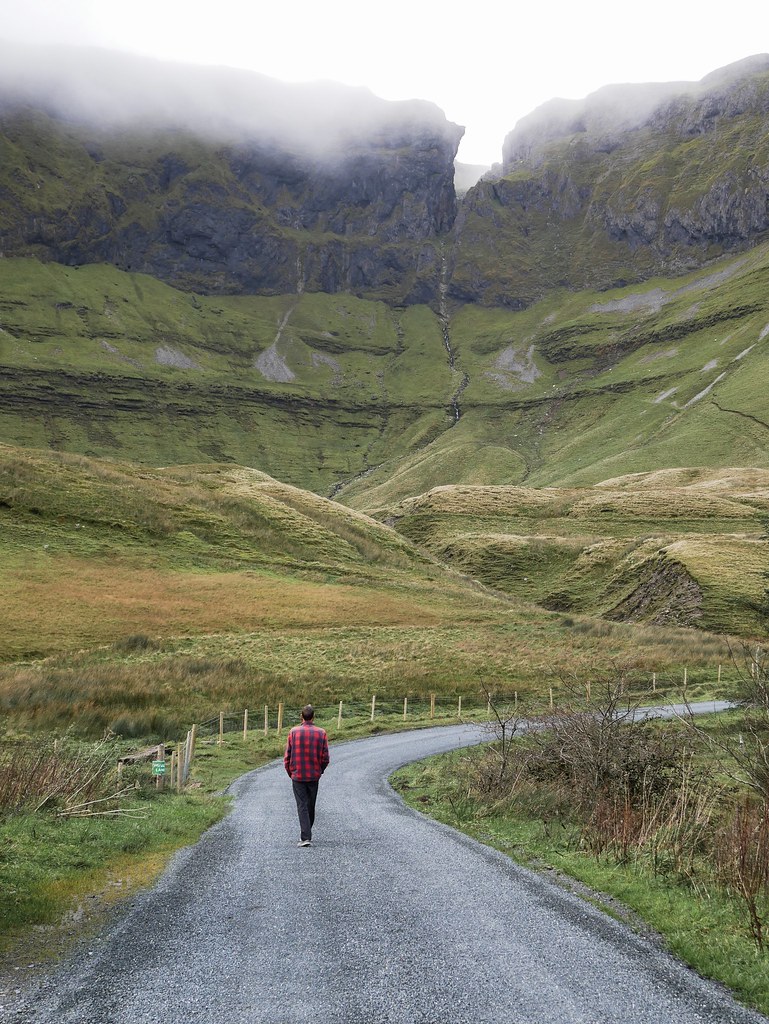 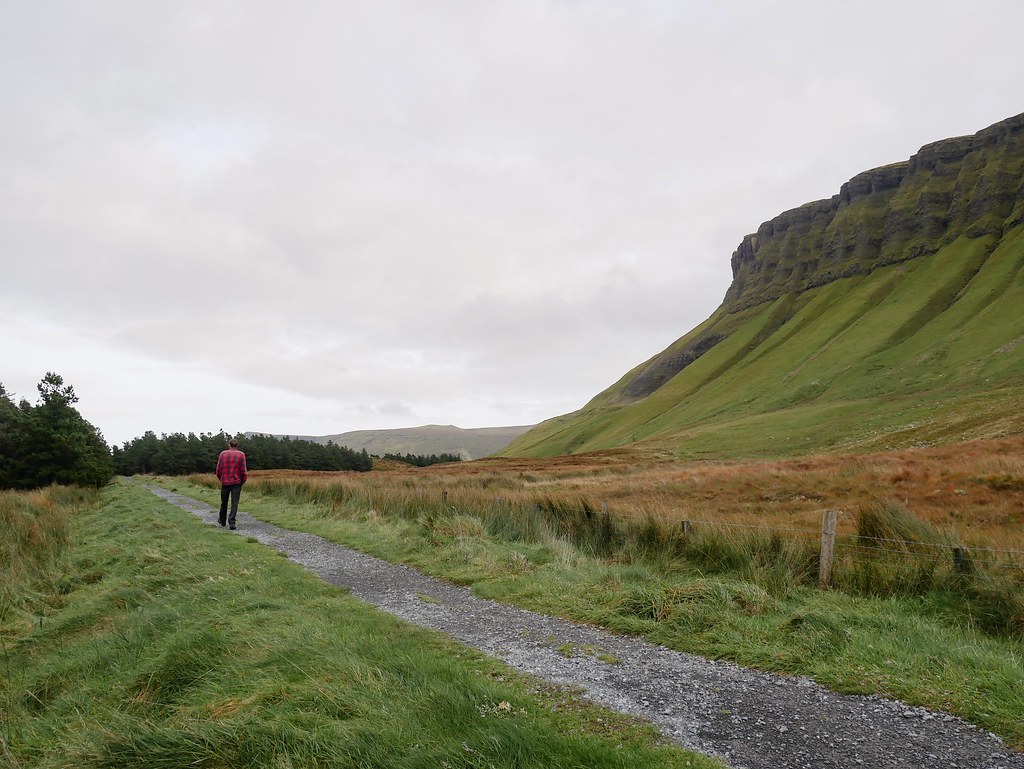 We decided to camp beside Glencar Lough and on the way we stopped at The Devils Chimney waterfall. It’s Ireland’s highest waterfall at 150m and a short uphill trail led us to its base. Apparently the waterfall dries up if it hasn’t rained so we were lucky to see it flowing. At the bottom was a copper tinged pool that we decided to have a brisk dip in. The access was horrendous and we were slipping over rocks and only managed to lay down in about a foot and a half of water as we didn’t want to go right under the waterfall, just incase a rock fell down. We found a nice, quiet park up beside the calm lake and when we woke up the next morning we walked to another waterfall nearby. Glencar waterfall wasn’t anything special but it’s always nice to get a walk in early on in the day. 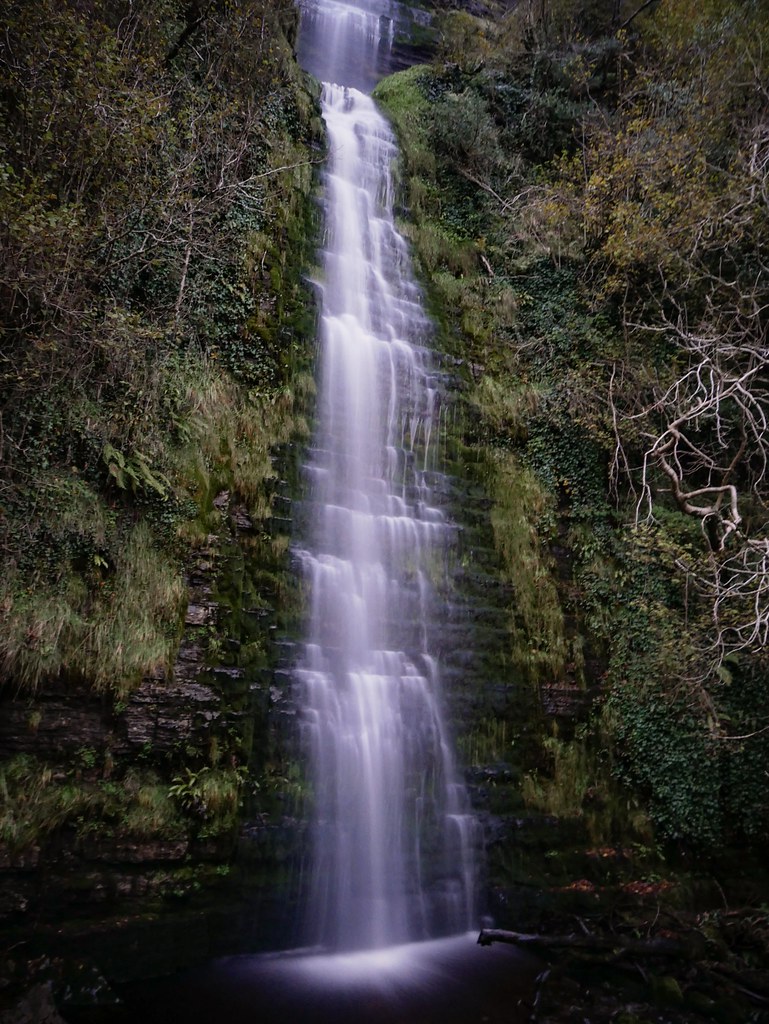 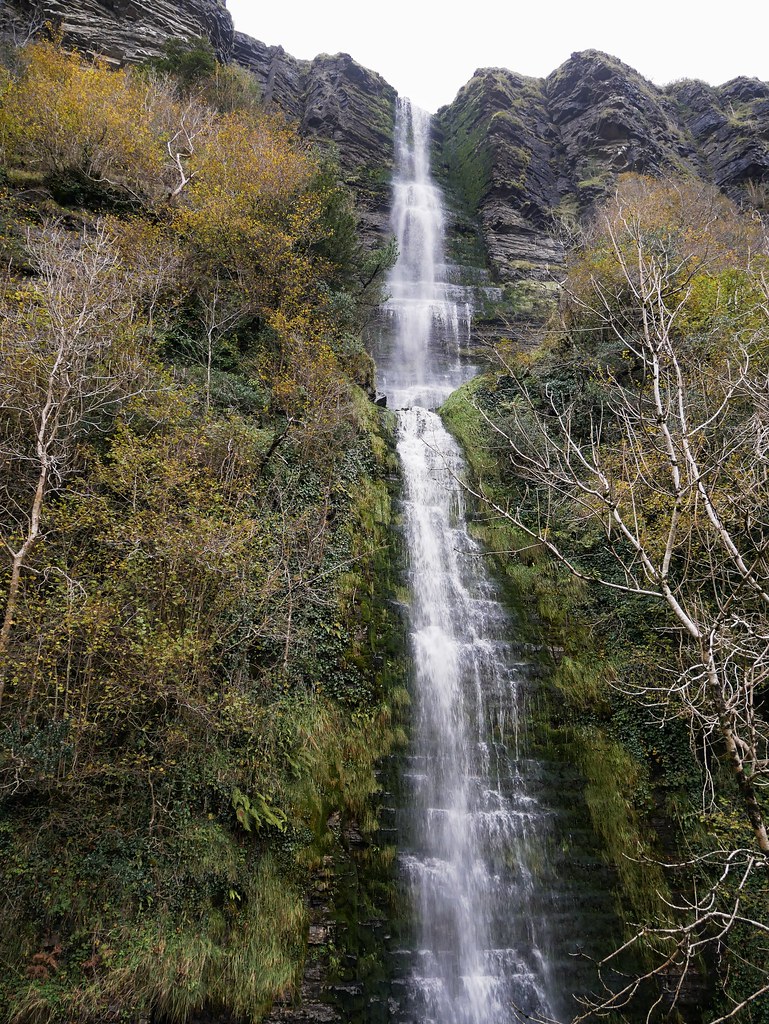 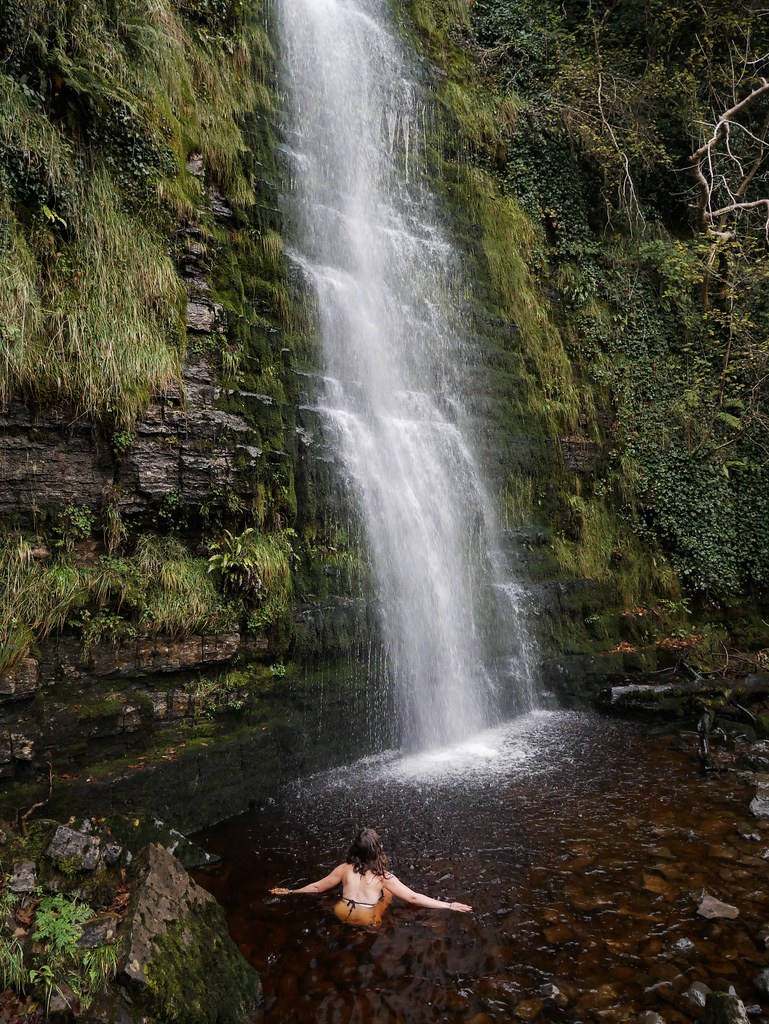 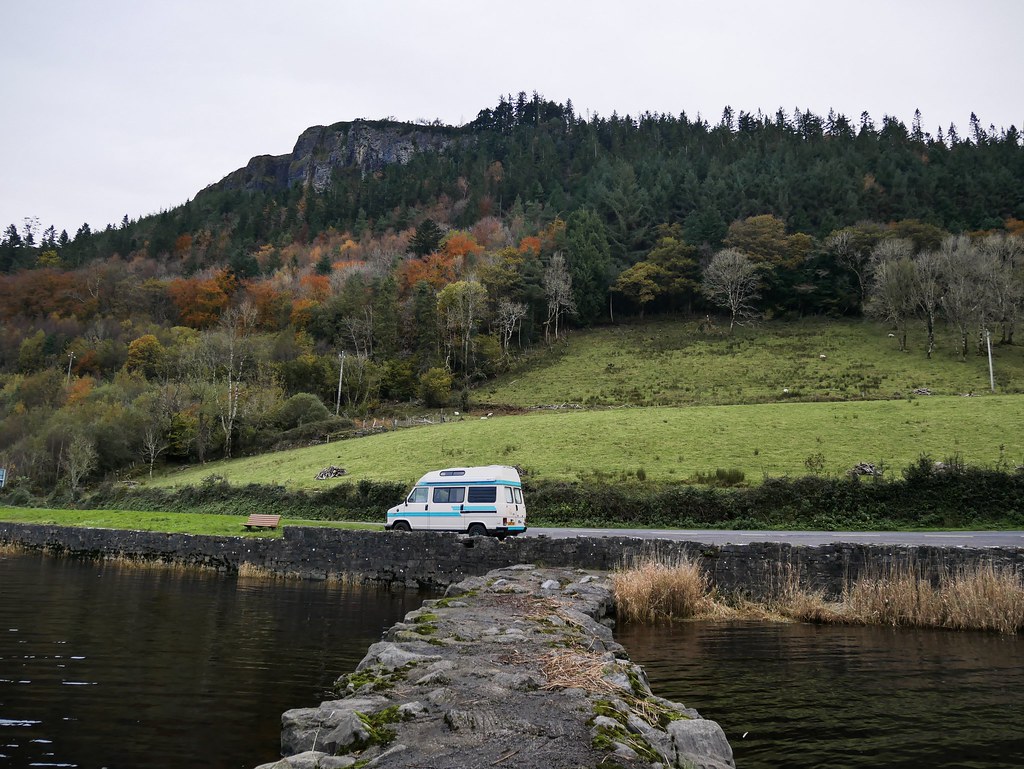 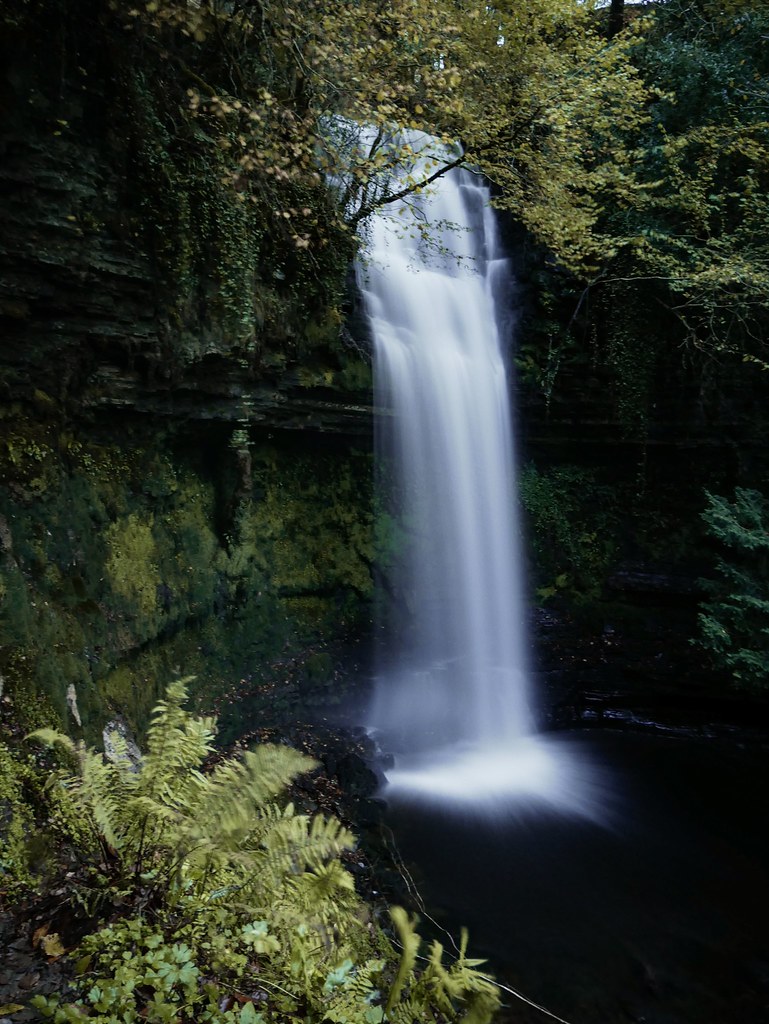