After spending some time hiking the cloudy mountains we changed tacks and did a bit of relaxing sighting around the Isle of Arran. We started in the south of the island at Kildonan where the houses all looked a bit nondescript but there was one fabulous building, it was a former free church built in the 19th century so it looked a little out of place from its neighbours. In the front lawn was an even stranger sight, an old gypsy trailer, or so we thought. We stopped to admire it but then we realised the writing on the side suggested it was an old trailer from a circus! Well you don’t see them every day.

We left the village and followed a coastal trail which I’d read was a good area to see seals and otters. We saw absolutely tons of seals, they used the rocks as their little loungers to rest on after fishing. I just love how they look like bananas with their bodies bent and the smallest part of their belly balancing on the rock. We passed a nice waterfall too and plenty of cows who were rather intimidating but I don’t think they meant to be, they were just curious. After we were having a loud conversation, panicking about how to avoid them we came across a couple sitting silently on a bench surrounded by cows. They would’ve heard us being absolute drama queens, how embarrassing. On our way back a lady walked onto the road from the nice house and I asked if it was her circus trailer and she told us her husband, who’s rather eccentric, bought it. She was such a jolly lady and boy did she love to gossip. Within five minutes she’d filled us in on all the village juice, walking us up the road to show us the new builds going up. She had two dogs, one was roaming along the quiet road while the other was just a tiny puppy being held in her arms. When a car came by she went to put a lead on the older dog but didn’t have a free hand so she shoved the puppy in my arms. I wasn’t complaining, I bloomin’ love dogs but I didn’t have time to think about how to hold it and I’m used to female dogs with lovely soft bellies. So I grabbed the puppy and I instantly felt moisture on my hand and realised I had his dribbly, furry dick in my hand. Eugh. I mean, he was really cute so I wasn’t mad but definitely a reminder that I would only want to own a female dog. 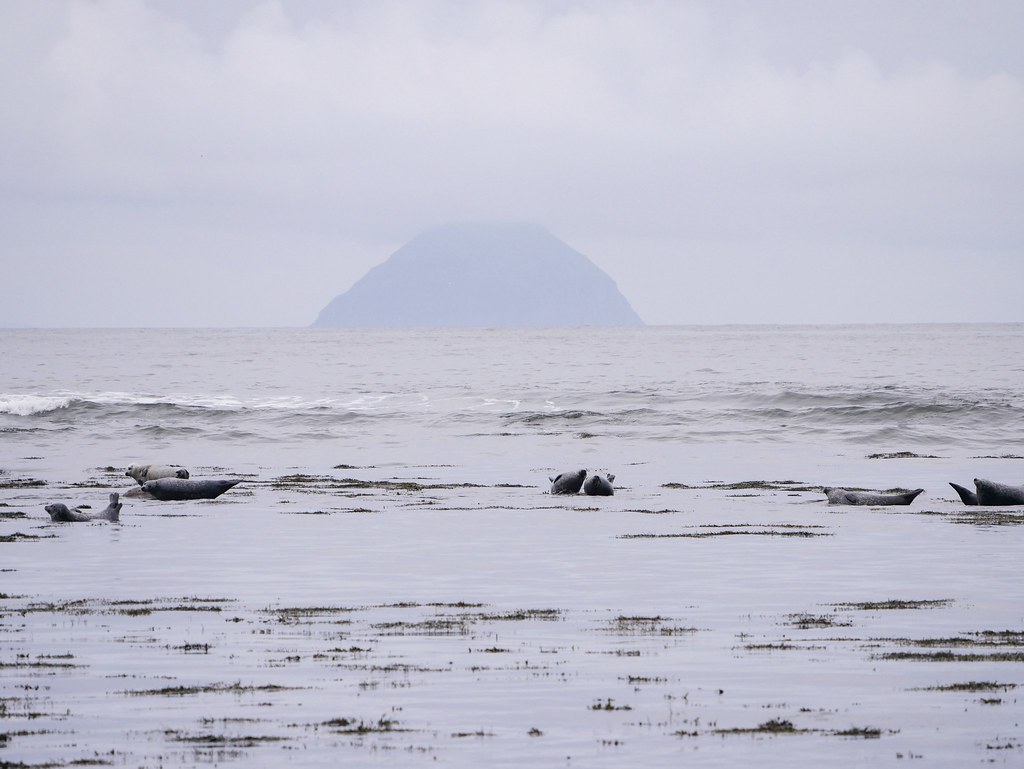 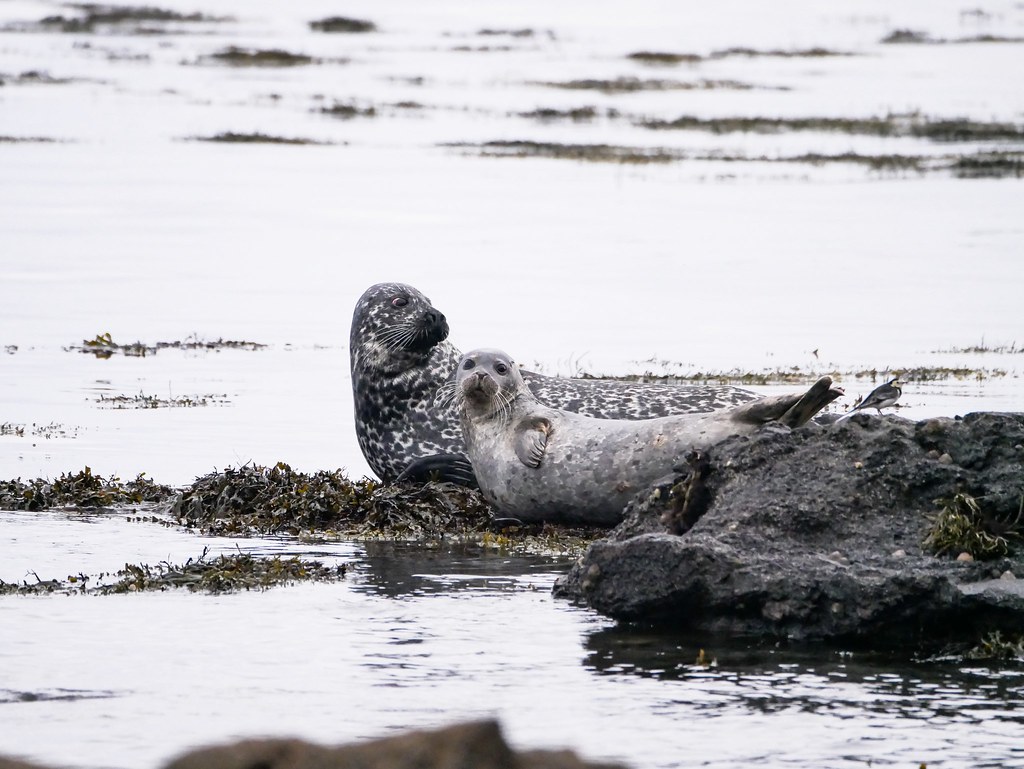 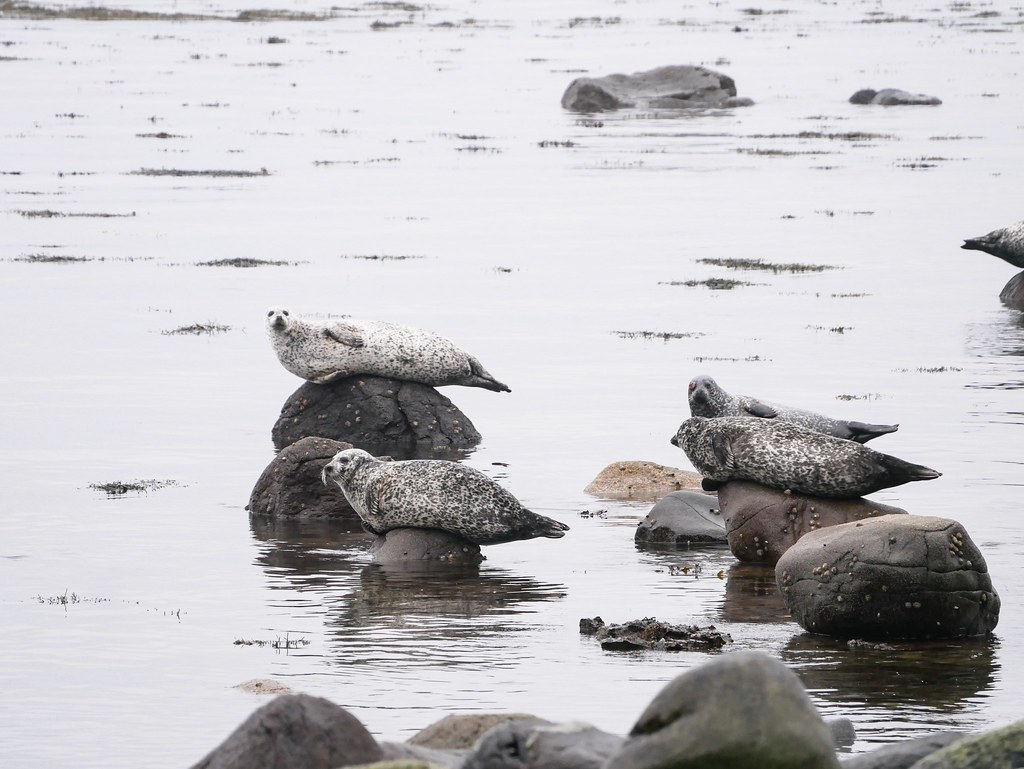 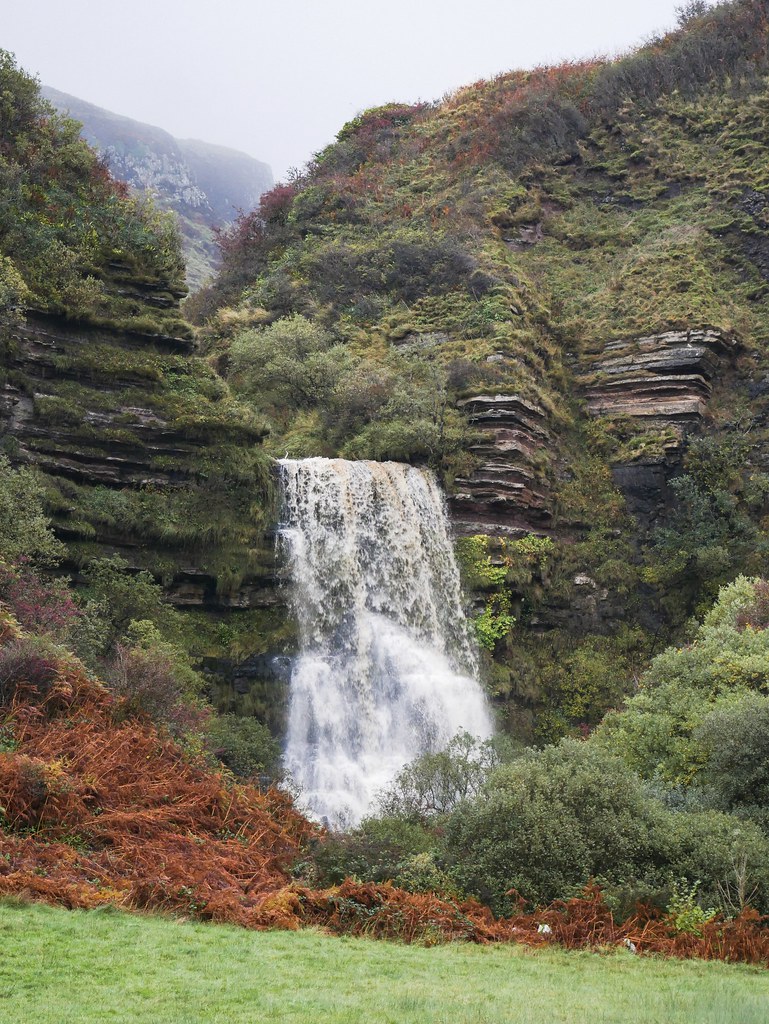 We continued our drive up the east coast where we stopped to do a short walk to Glenashdale Falls. I didn’t really know what to expect but as we walked to the end of the viewing platform the view just kept getting better. It started with a fairly small waterfall which I figured was the main one, but it cascaded down into a pool and then a second waterfall plummeted down 45m! Wow! It was really impressive, so I guess Arran is ticking all the boxes; mountains, beaches, wildlife, waterfalls and scenic drives. 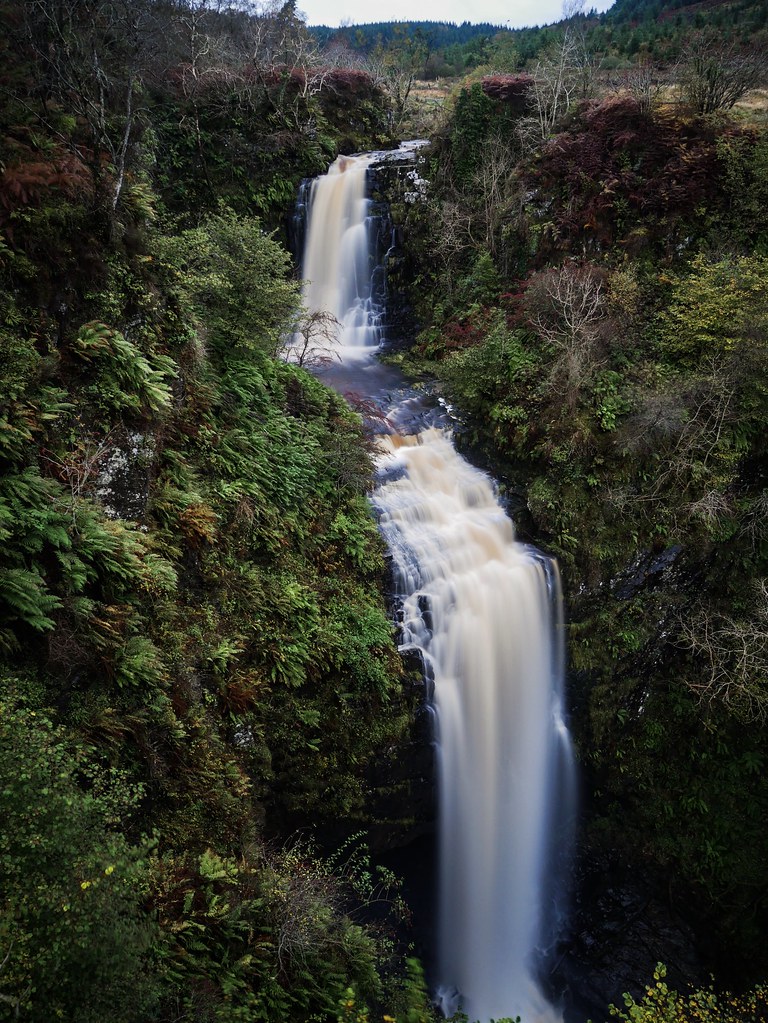 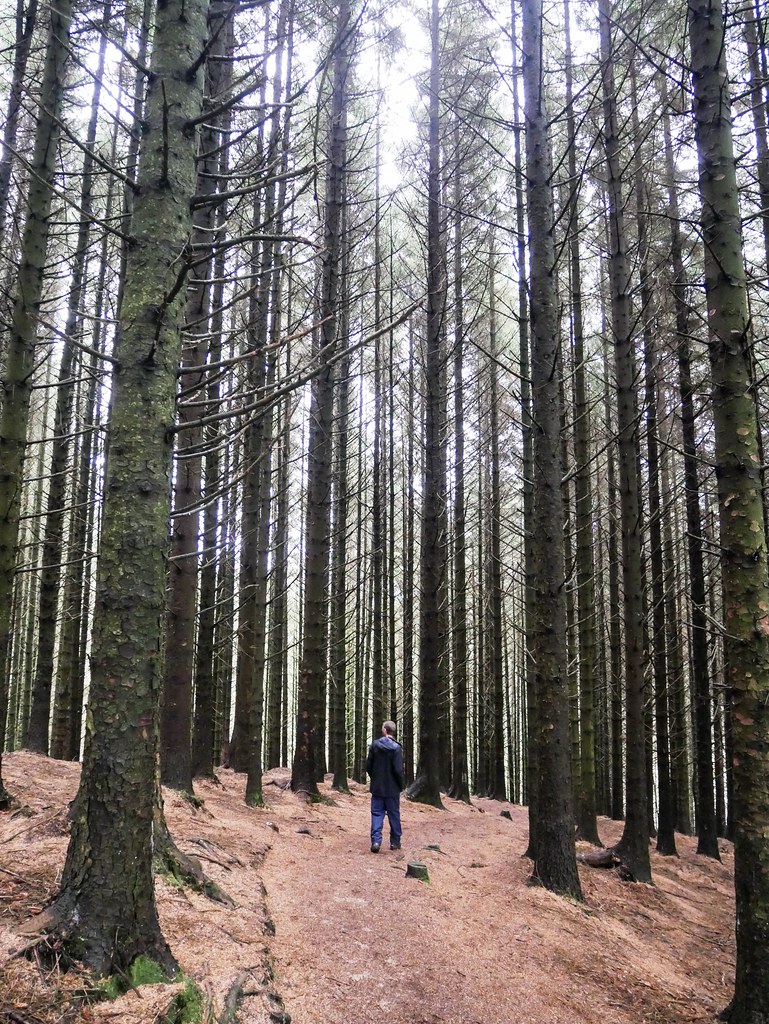 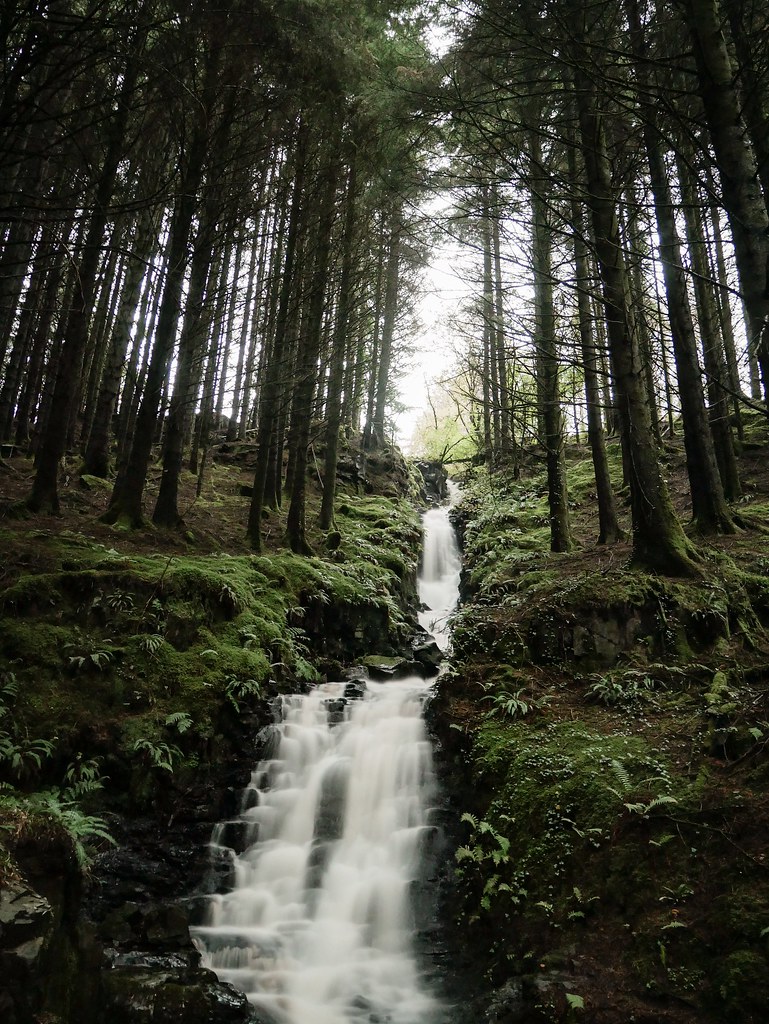 We wanted to try our luck at seeing deer again so we headed back to the northern part of the island. That evening there was news that a big solar storm was happening and the chances of seeing the northern lights, even in England was high. So we made sure we parked in a spot with a view north. I couldn’t believe our luck, not only were we parked up in an area with almost no light pollution but we had clear skies and no wind!! I headed out at dark to take a photo and see if any aurora showed up. After spending two winters in the Arctic we’ve seen some crazy aurora shows and I knew from experience that the weaker the show or the further south you are, the less likely you are to see any colour. It would look more like a grey area in the sky as appose to green, but with a long exposure on my camera it would show the true, green colour. As I stepped outside to take some photos I heard a noise and shone my torch around. Three sets of eyes stared at me, it was deer and even though their harmless it felt a bit more spooky outside with them around. 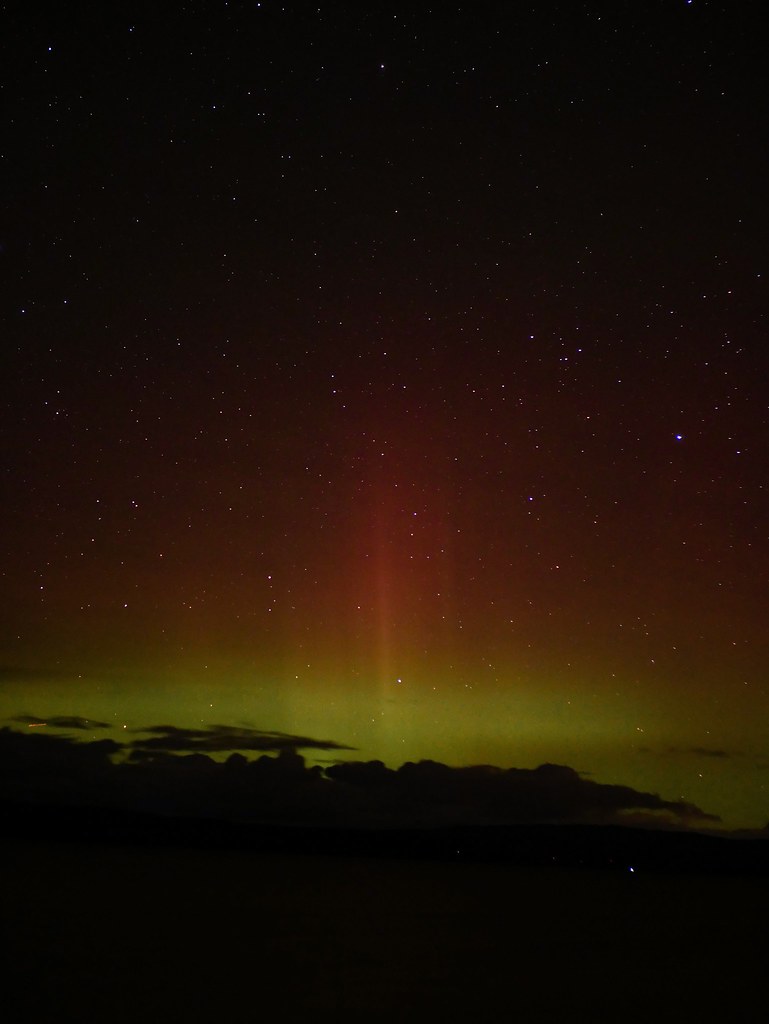 It wasn’t just green showing up in my photos though, there was a fabulous red layer with beams shooting skyward. The dark sky was filled with stars and due to it not being windy or rainy we decided to open Helga’s side door and lay under a blanket with hot water bottles, staring up at the sky. My camera was on a tripod in front of me so I could press the shutter button while huddled up on the sofa. We saw so many shooting stars and ended up staying awake until 1am which was very impressive for us! 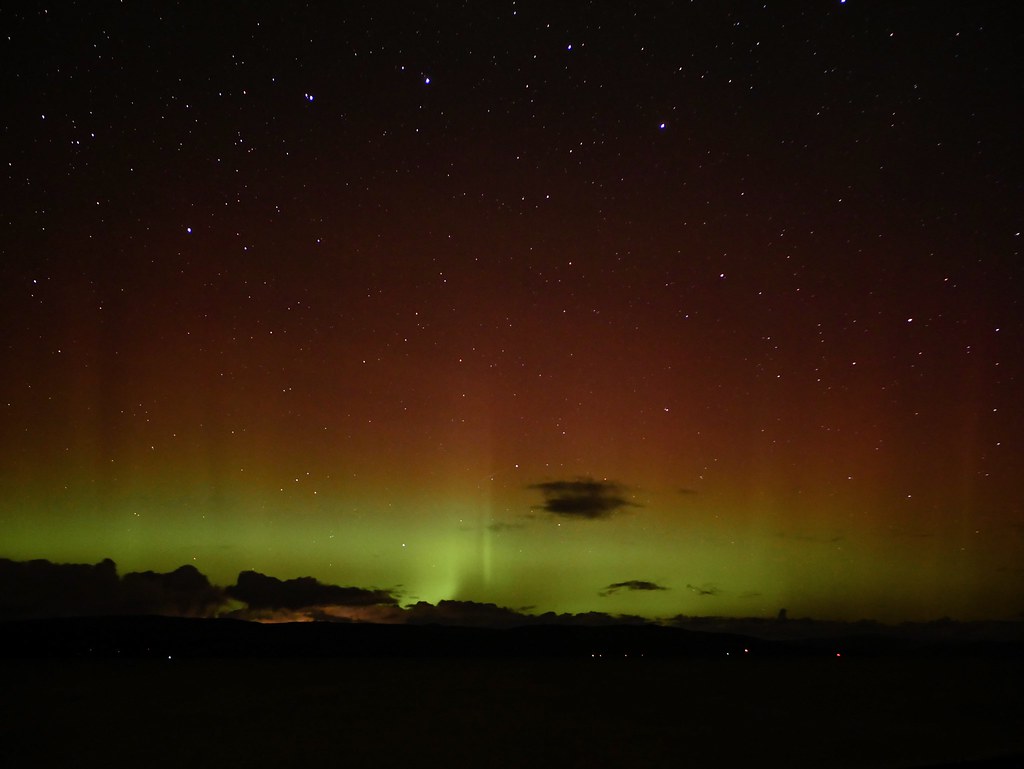 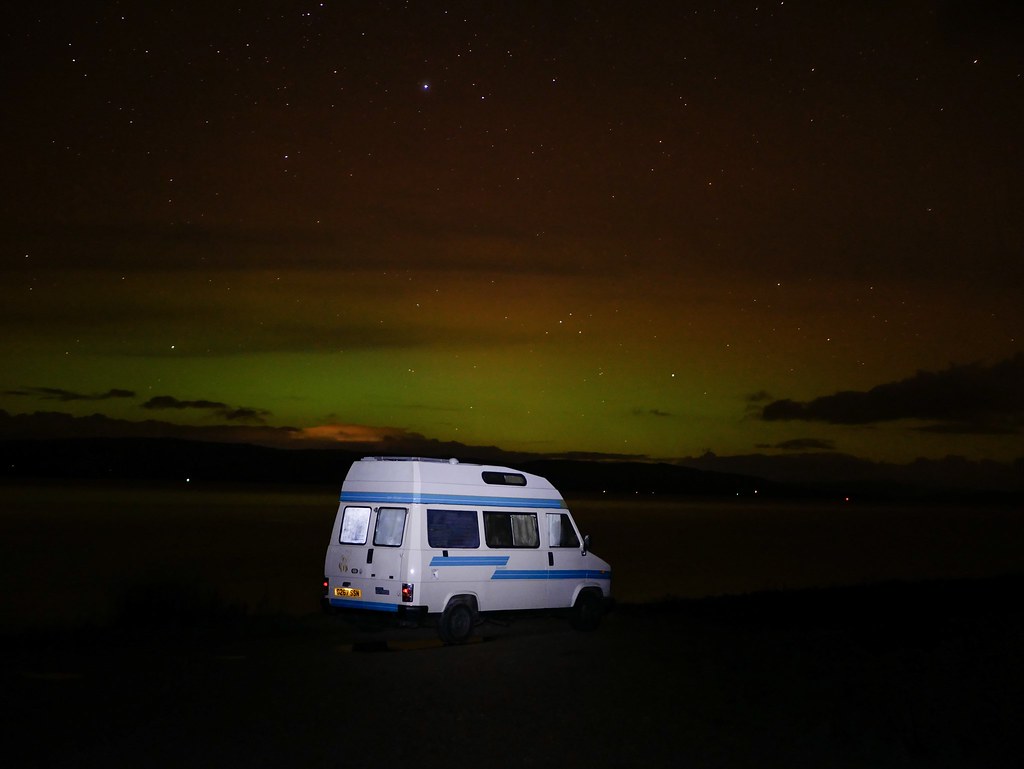 The next day the weather changed drastically and we had heavy rain. So heavy in fact that the road totally flooded and someone who saw us parked up kindly came over and warned us we wouldn’t be able to get through if we were leaving soon. Luckily we weren’t heading anywhere fast so we waited for the tide to go down and the rain to ease before we drove to the golf course for a bit of deer stalking. People’s gardens were still flooded in areas and debris was across the road and up the banks. It looked like the water was about 2ft deep at one point and the river we drove over to reach the golf course was bulging. We did a nice evening stroll across the very wet grass where we passed numerous deer. There was clearly a very healthy population of deer on Arran but we were amazed how in our week on the island we didn’t see any rutting behaviour which was a bit of a shame. 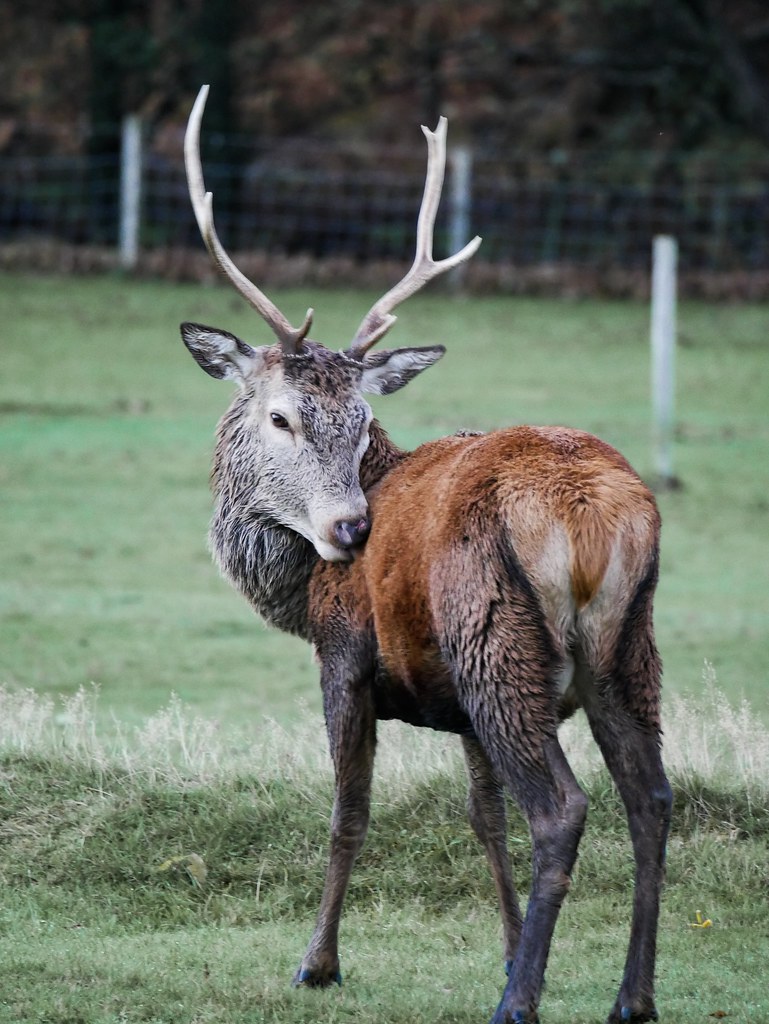 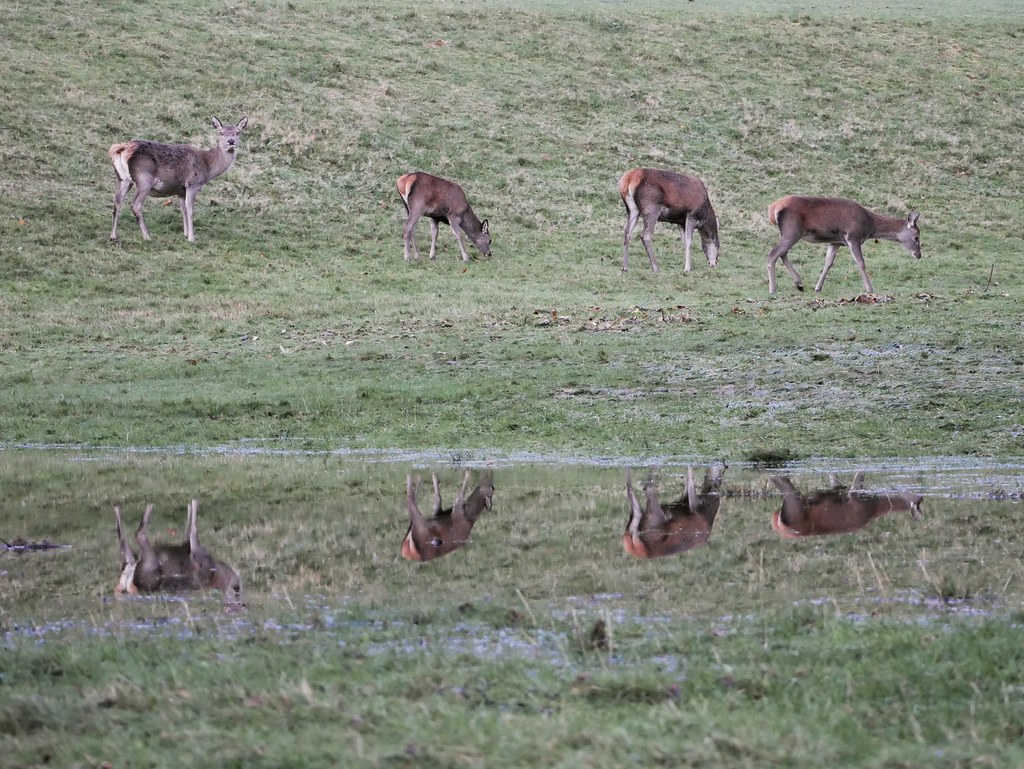 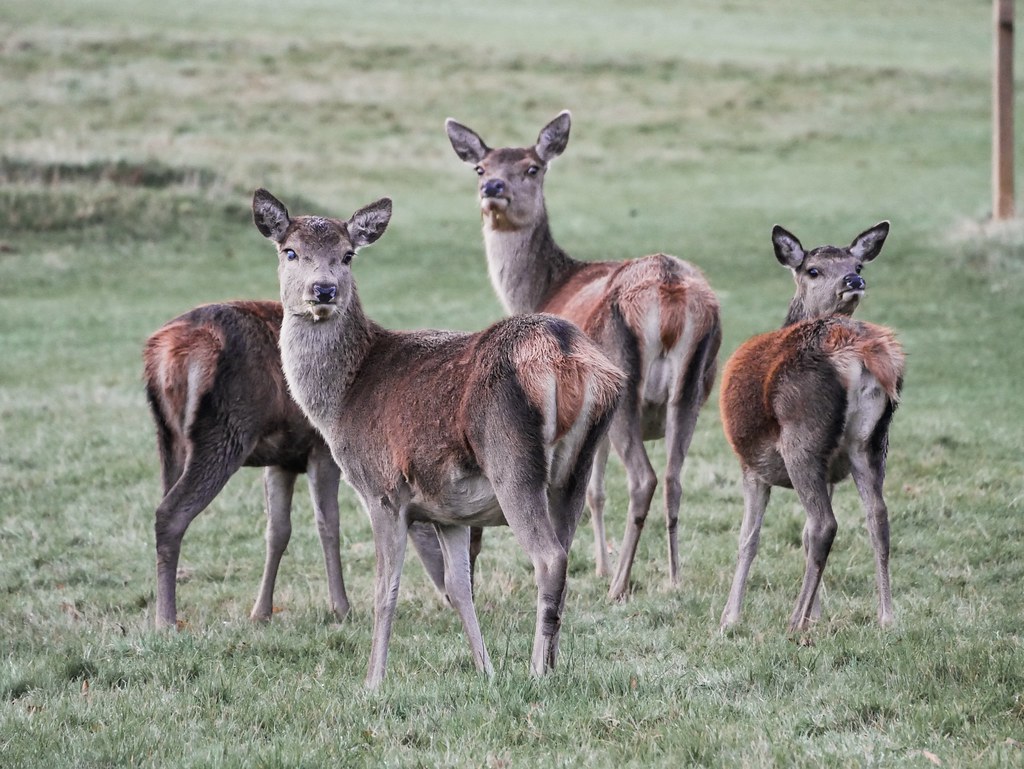 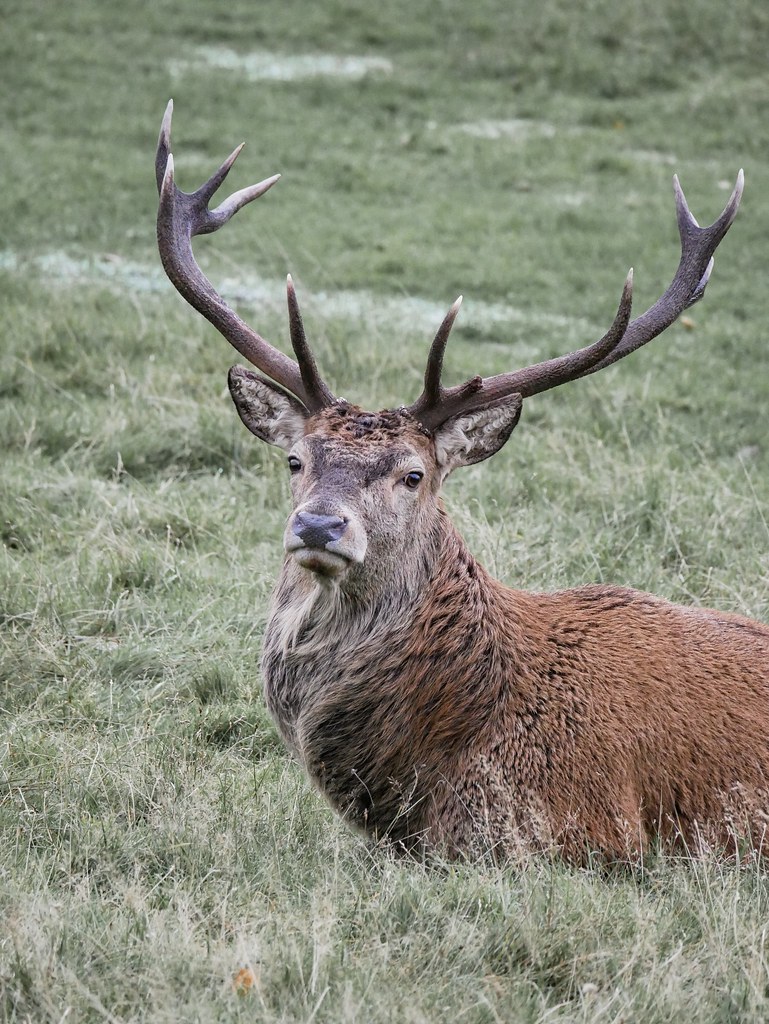 On our final day we drove up to a viewpoint and got a clear view of the mountains…the ones we spent hours on, hiking through rough moorland only to be rewarded with fog. Then we found a nice spot where we could park right by the sea and watch the very active seals jumping out the water which was great fun. Even without a successful mountain hike or seeing the deer rutting I’m glad we came to the Isle of Arran, ‘The Isle of 1000 Benches’ as we renamed it. 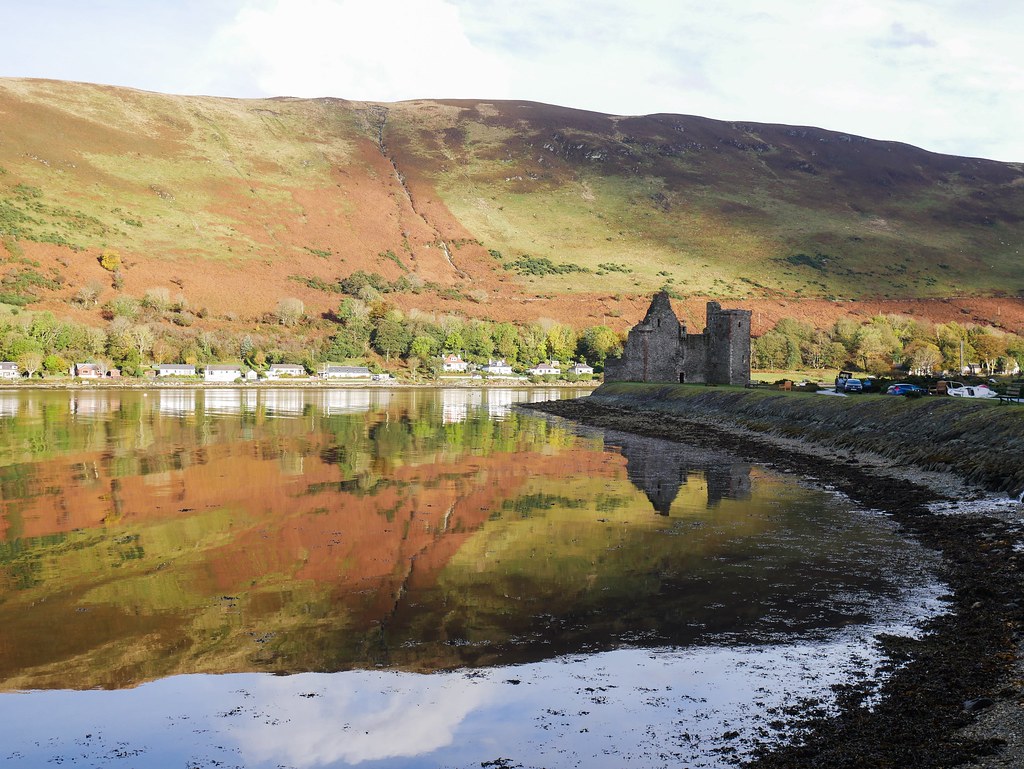 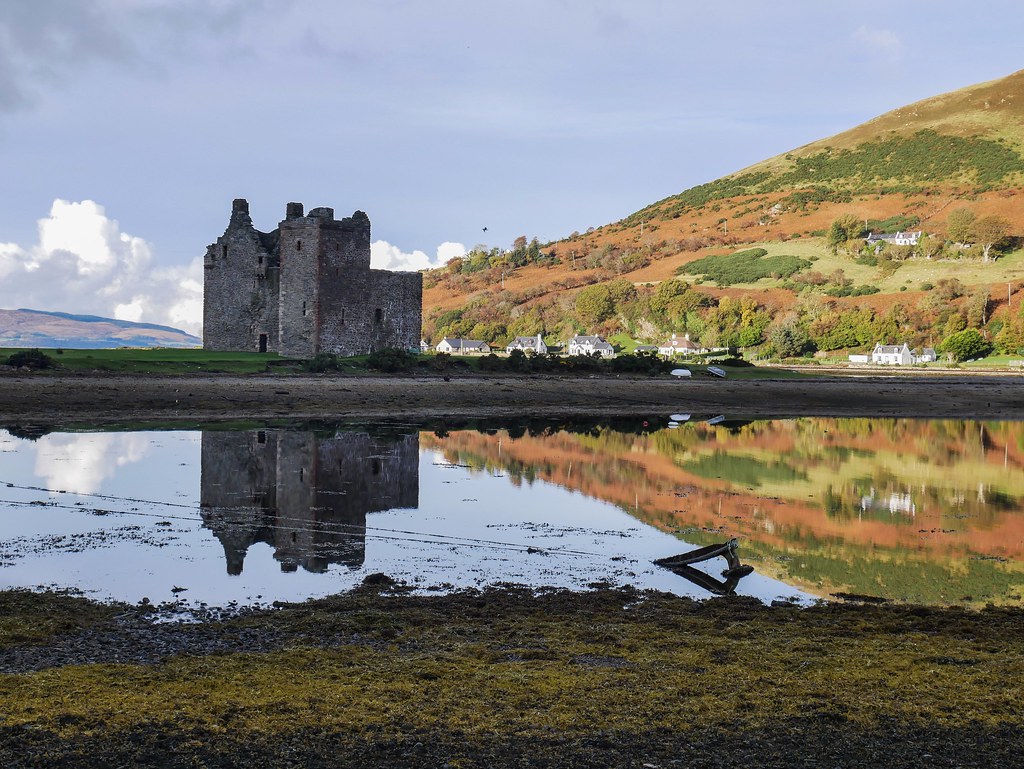 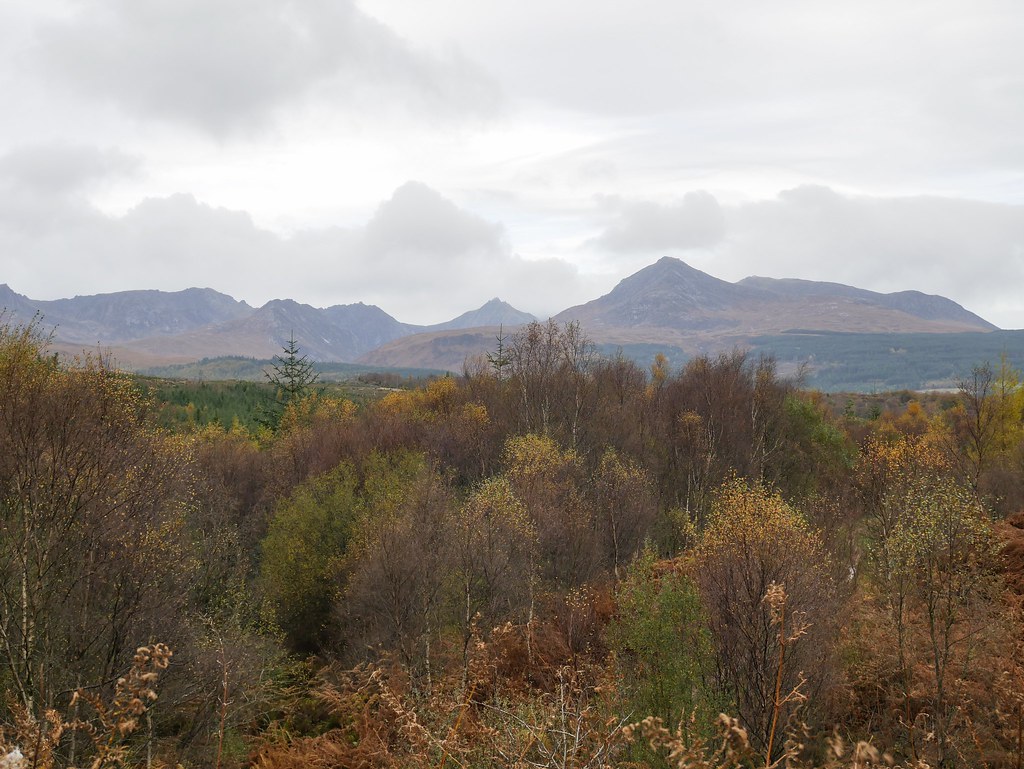