The Isle of Arran is described as being a miniature version of Scotland because it has a bit of everything from mountains and beaches to seals and deer. In fact it’s home to over 2000 deer which makes it a great place to witness the rut. It’s now the end of October and the rut should continue until early November so we’re still in good time to see them fighting and roaring. We were accessing the island from Claonaig which has a small car ferry across to Lochranza. It was a particularly windy day and the ferry pulled up in the most haphazard of ways, the ramp was barely touching the concrete pier and waves were sloshing all over the place. Cars started driving off the ferry and we watched in horror as waves hit the undercarriage of their vehicles. My goodness I would not want to drive a low-riding car through that. The car in front was hit by a big wave and then we floored it onto the ferry while the tide was out. We were allowed to sit in Helga for the journey and it was a rough ride, our chairs were bouncing up and down and we looked like human versions of nodding dogs.

The sun was shining as we arrived on the island. I didn’t have much of a plan for our week here so after lunch we made a very impromptu decision to hike up Beinn Bharrain in the Pirnmill Hills. It was already 1pm and the hike was due to take 6-7 hours which meant we’d be back at dark. Seeing as the weather was nice and we had some pretty grim rain forecasted for the rest of the week it seemed like a good idea. The road leading to the trail was really beautiful, hugging the coastline most of the way. One thing we instantly noticed about Aran was the amount of benches. They were all over the island! Some were randomly placed along the coast in areas where you couldn’t park and wouldn’t walk to. It was bizarre. Craig and I have joked before about having a bench in memory of us. I said I’d want a plaque with ‘In loving memory of Lauren Winslow-Llewellyn, who’s body was found decomposing on this very bench’.

We ended up being the only people on the hike which we always enjoy. It was a very boggy approach but eventually the rocky climb began up to the ridge. It didn’t take long for the weather to turn bad and before we knew it we were walking inside a cloud. At some point I felt rain hitting me so I rapidly put my waterproofs on while Craig stood and stared at me – it wasn’t raining it was a waterfall being blown in the wind towards me. Somehow we kept our spirits up and continued along the ever so blustery ridge where I entertained myself by filming the wind hitting my face and my cheeks filling up with air, which I found rather amusing. Occasionally the cloud would clear but only low down, revealing little lochs hidden in the valley, while the mountain tops remained covered in a thick, white blanket. 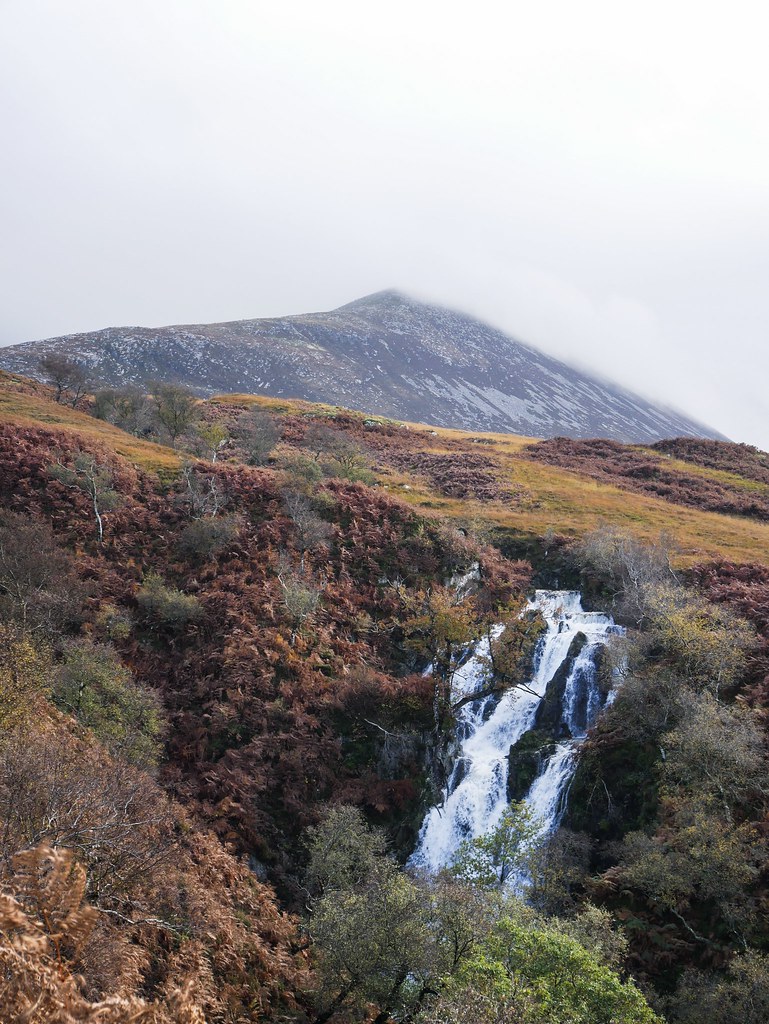 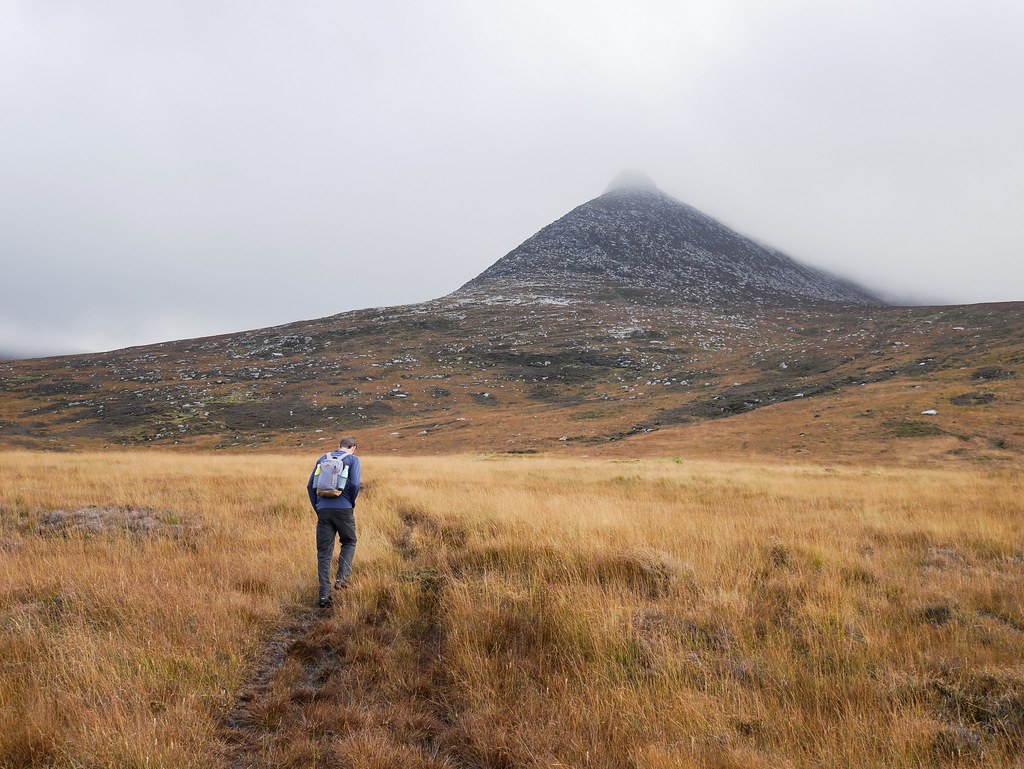 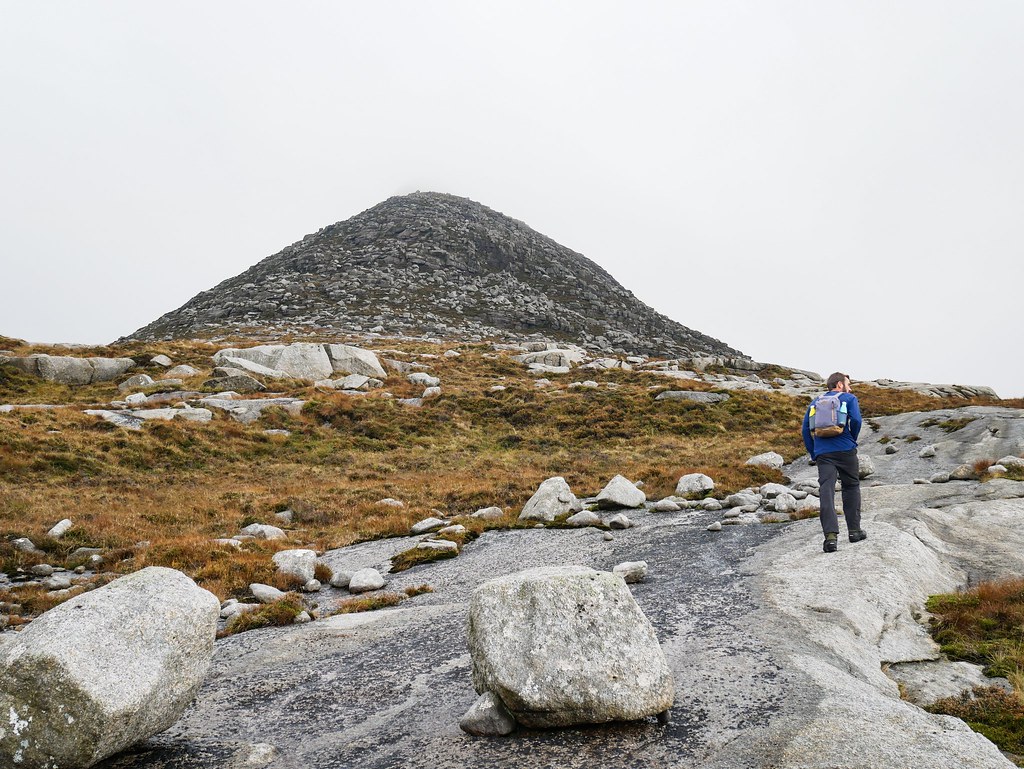 The route down led us along the shores of a really pretty Loch with a white shingle beach on either end. It would of been a lovely spot for a swim but it currently had white caps skimming the surface and the sun was about to set. We spotted quite a few distant deer on the hike and at the end I was able to take some rather blurry snaps of some standing in front of the pink sky. The route back was along the road for almost an hour. It was getting darker but we let our eyes adjust and got back without the aid of our head torches. 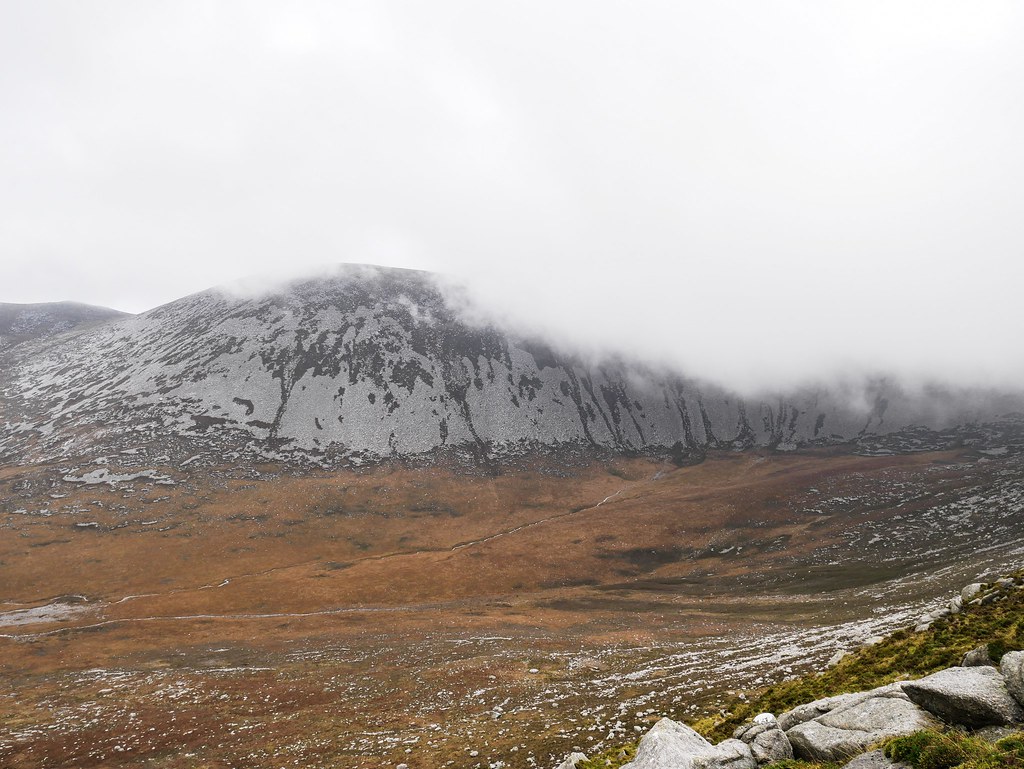 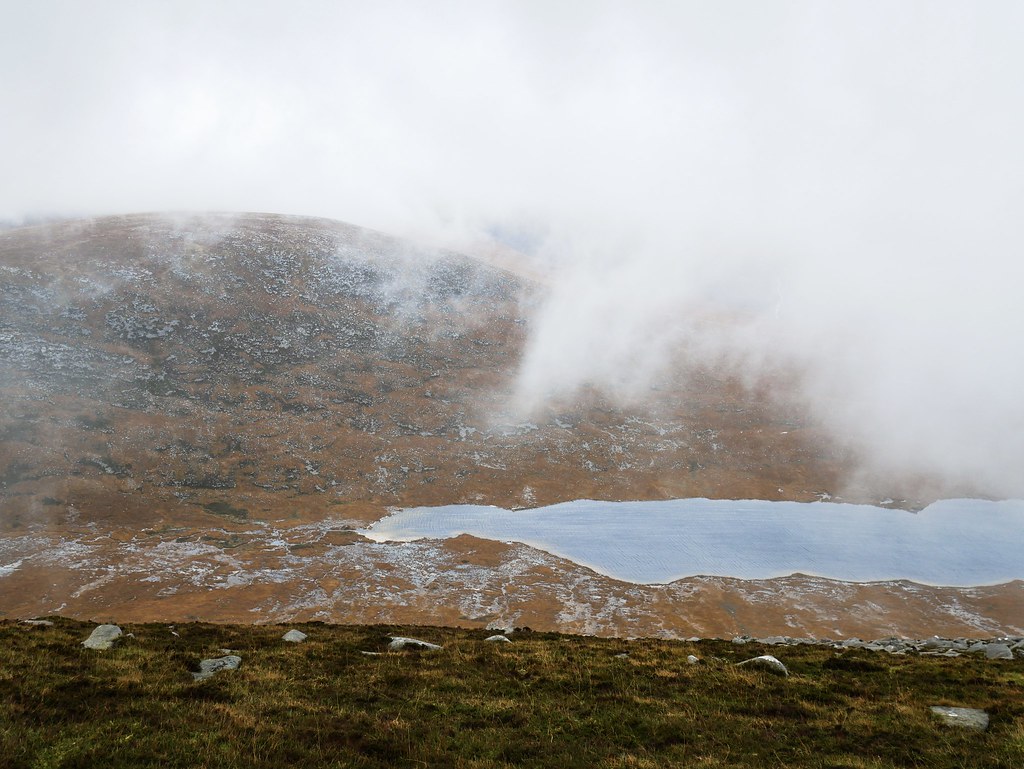 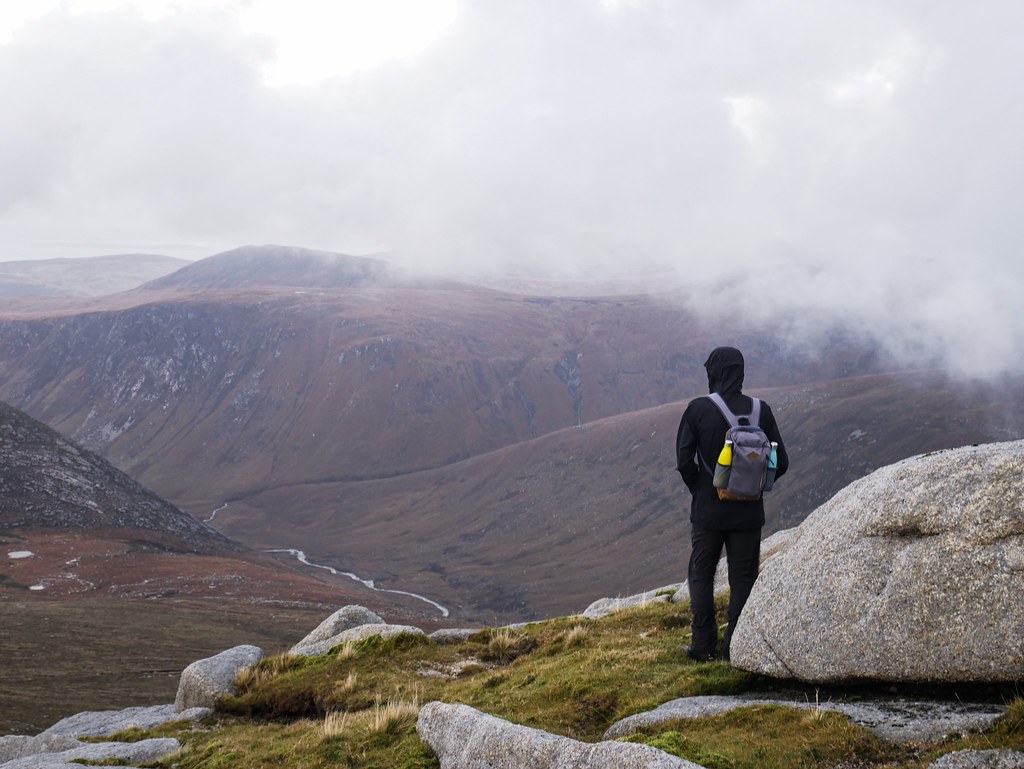 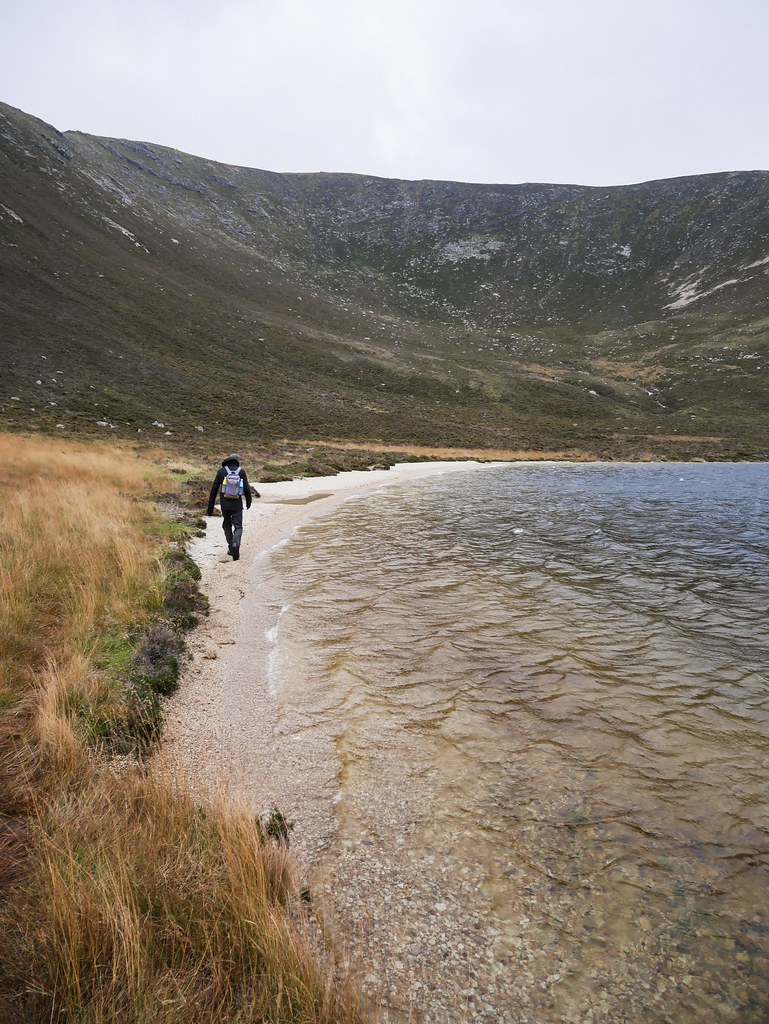 The next day we woke early to try and see some deer. Our first stop was the golf course in Lochranza as we’d heard they like to hang out there. The rumour was true and a couple of herds were grazing on the manicured grass. They weren’t fighting or roaring though so we continued the drive up the valley where the hill side was dotted with more deer. Once again, no rut activity, it almost seemed like the stags had settled any quarrels and were happy living in harmony, much to our annoyance. 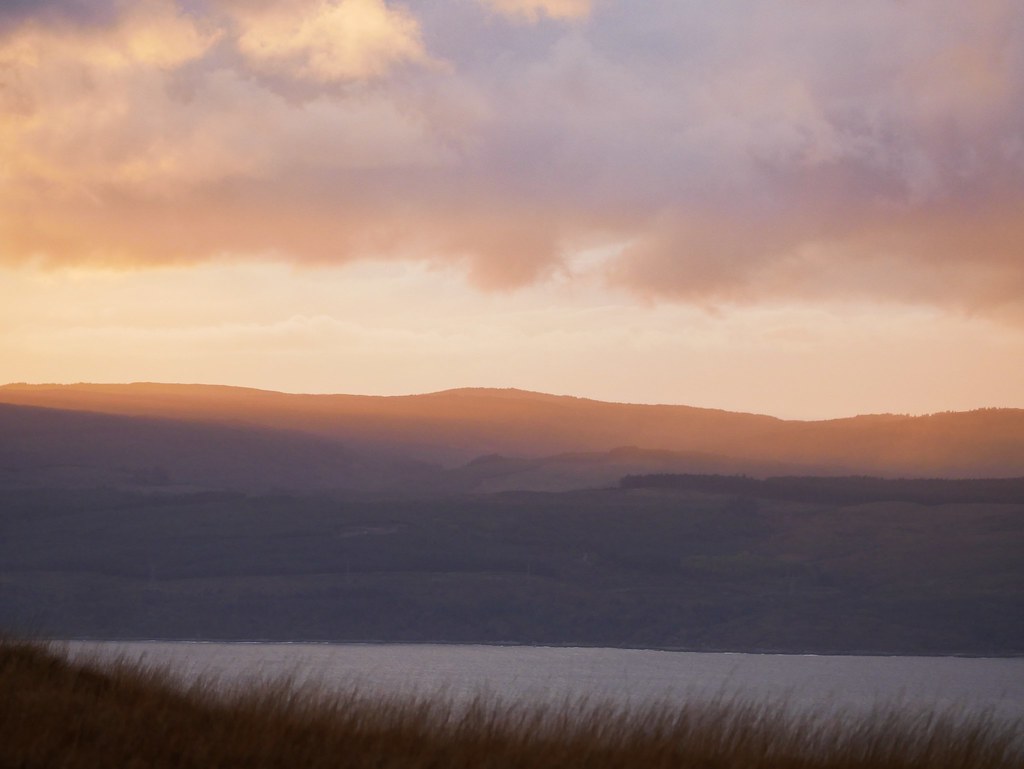 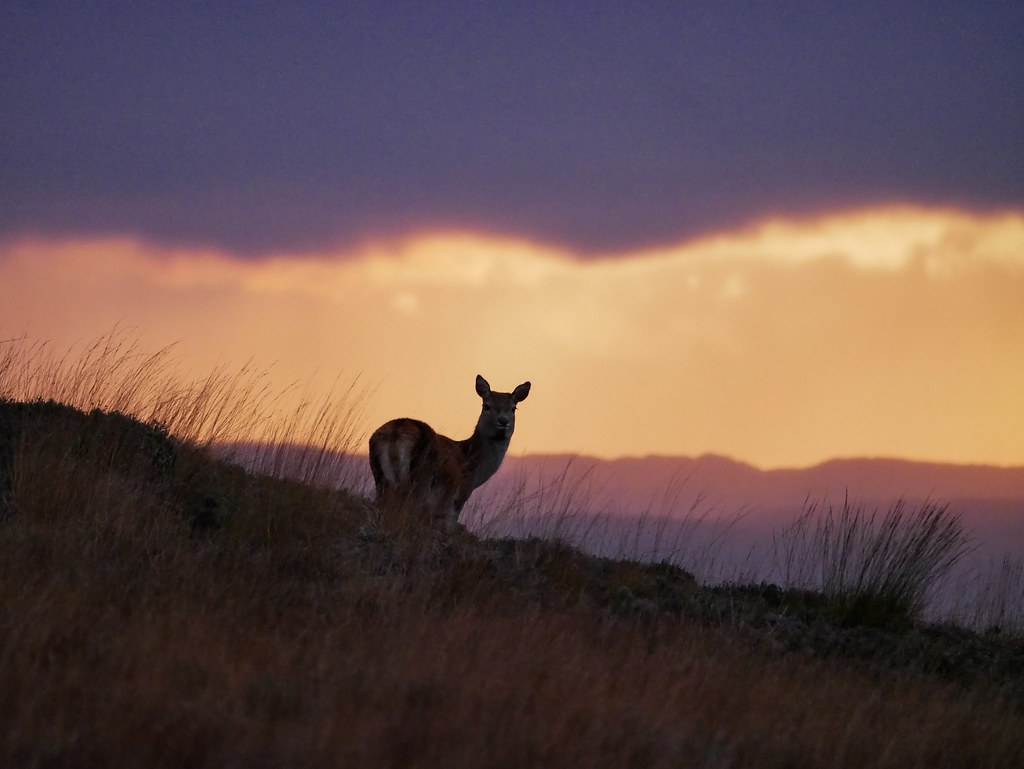 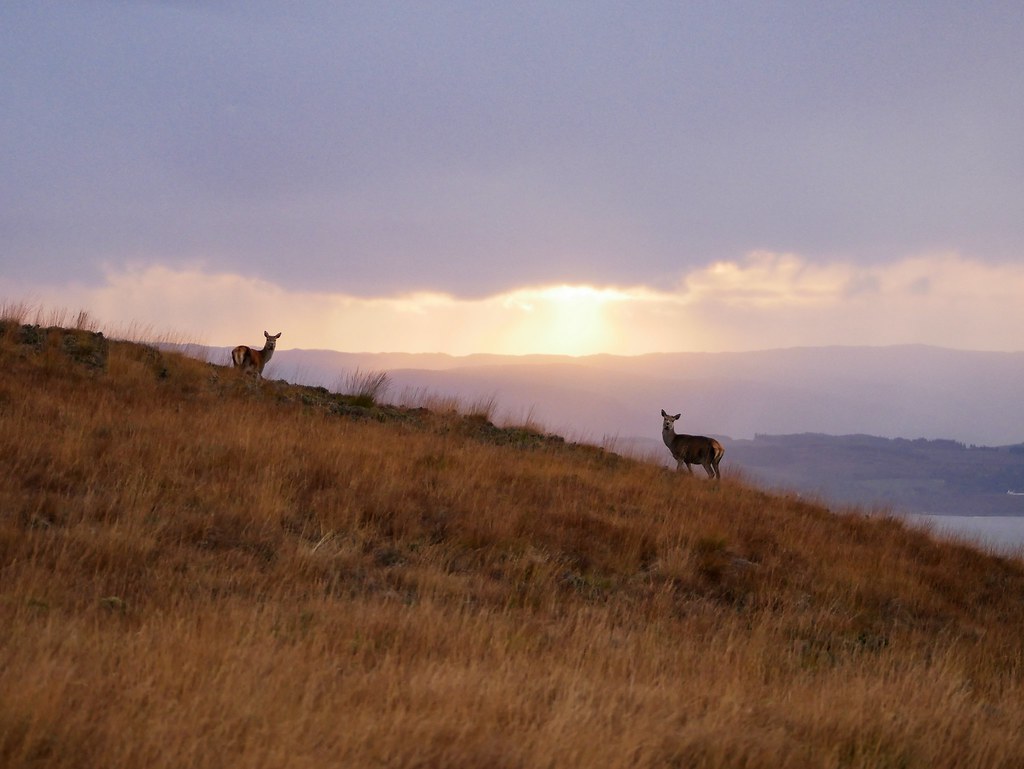 For a little island, Arran is home to some very impressive mountains with jagged, rocky peaks and we were excited to explore them. There was a chance of rain in the afternoon so we made the most of the morning by hiking up Caisteal Abhail. The first section was a gravel track that led us between a dense forest and a gushing river. After about 4km the path stopped and we had to rely on our map from now. Our first challenge was crossing a river and then we made our way along very boggy moorland to begin our ascent. We could see the mountains we were heading to were covered in cloud, but we tried to stay optimistic that it would clear. 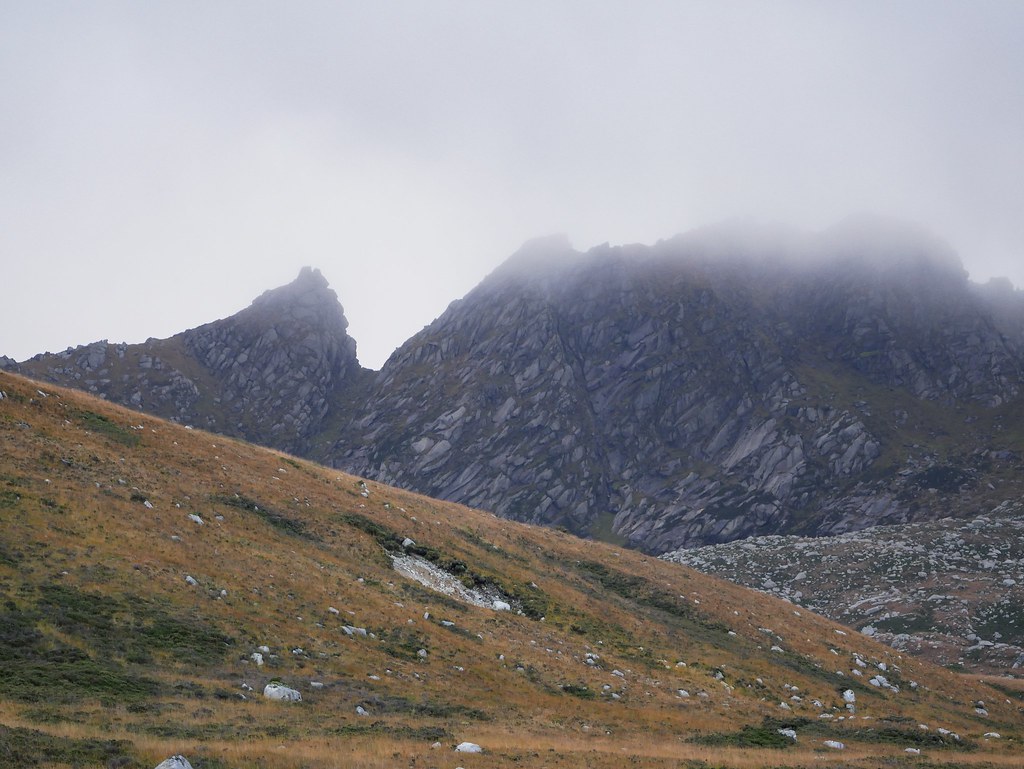 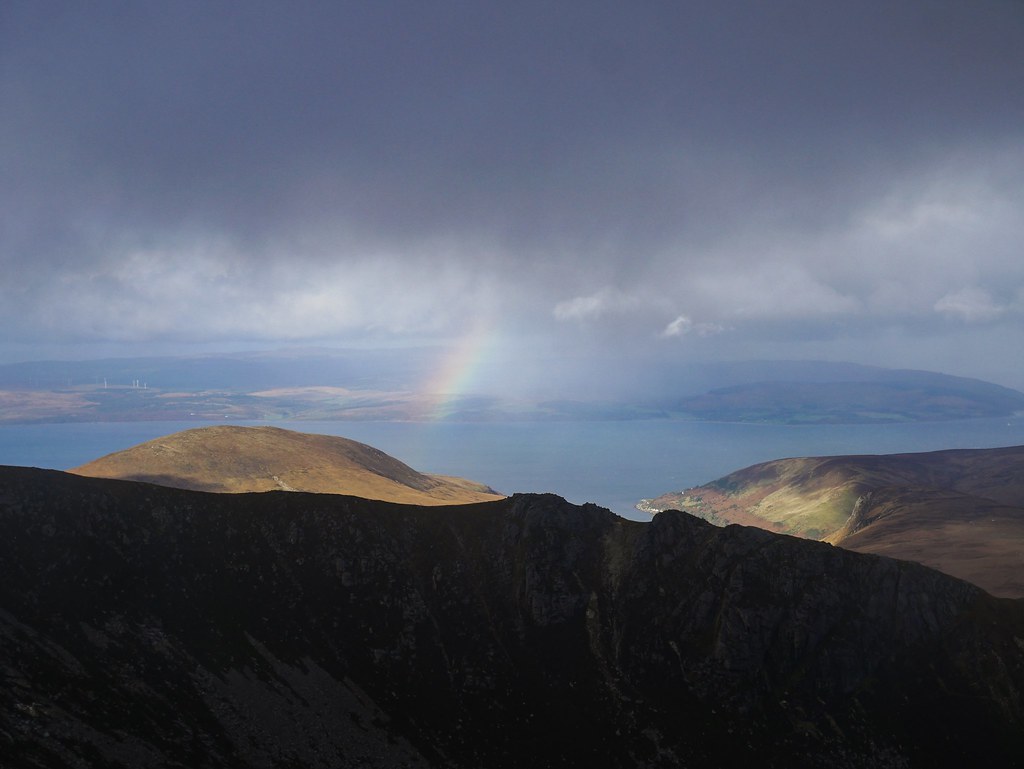 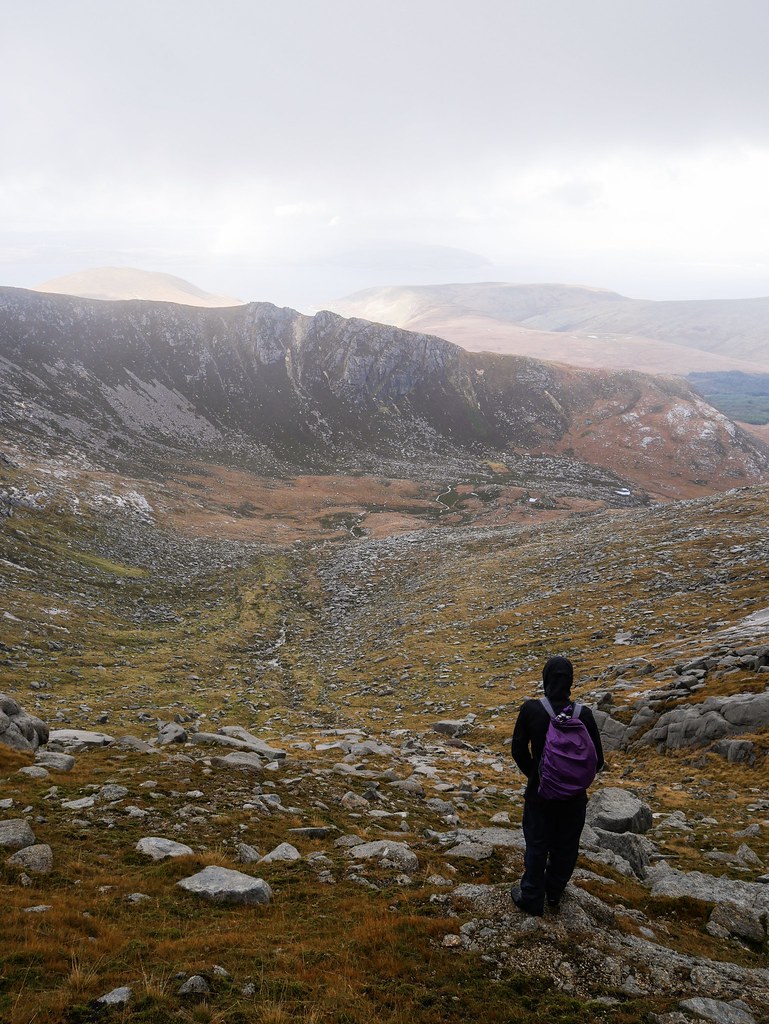 We reached the summit where bizarre shaped rocks rose out the ground and big tor’s looked like melted rocks. But that’s all we could see, the visibility was only about 10 meters and I was so gutted. The view from this summit is described as being absolutely jaw dropping so I was really disappointed. It was bitterly cold at the top so we didn’t want to wait for it to potentially clear so we decided to head back down. We took a different route and it was awful as we were basically trudging our way through really challenging moorland with hidden holes and unpredictable terrain. It seemed to take forever to get back to the main trail and would you believe it – I looked back and the fucking clouds had cleared! I was so angry. 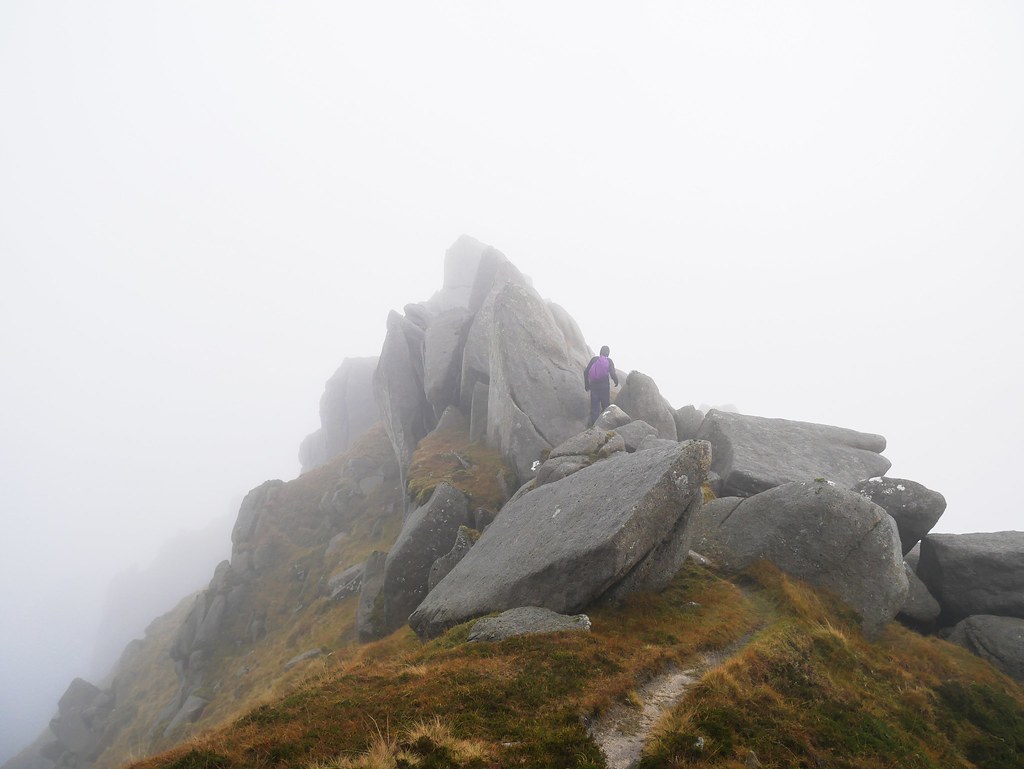 Another day we headed up Goatfell Mountain from Corrie. Much to our surprise it had a well constructed path the whole way so no bog to navigate, which was great but a shame we wore our uncomfortable welly’s. It was a really nice and easy accent to North Goatfell but as soon as we got to the top cloud began to sweep in. We got a few glimpses of the ridge we were hiking along and the lower valley but still no summits. We didn’t get back until dark but it meant we got to watch the sunset on the way down with plenty of pink clouds floating in the sky. 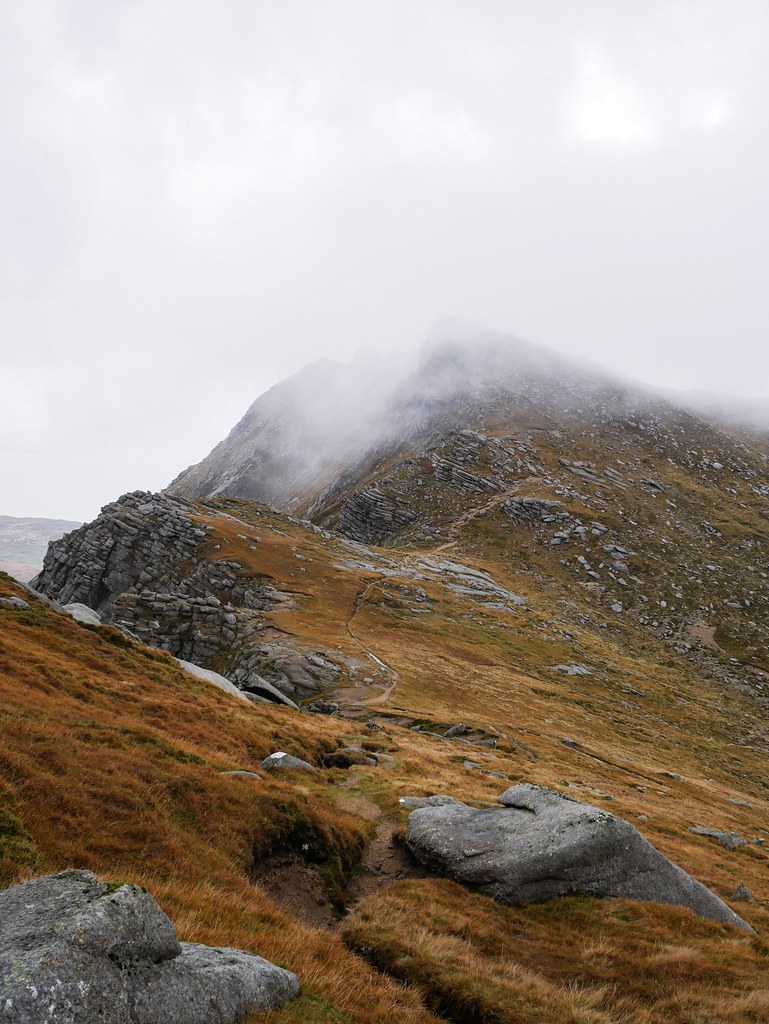 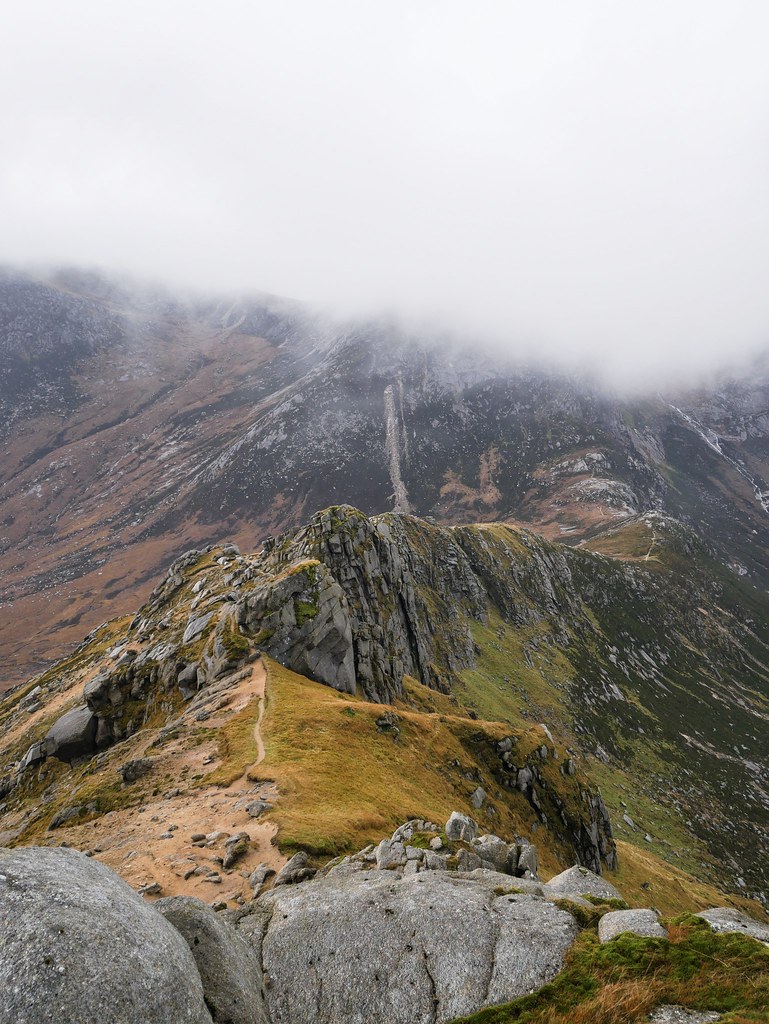 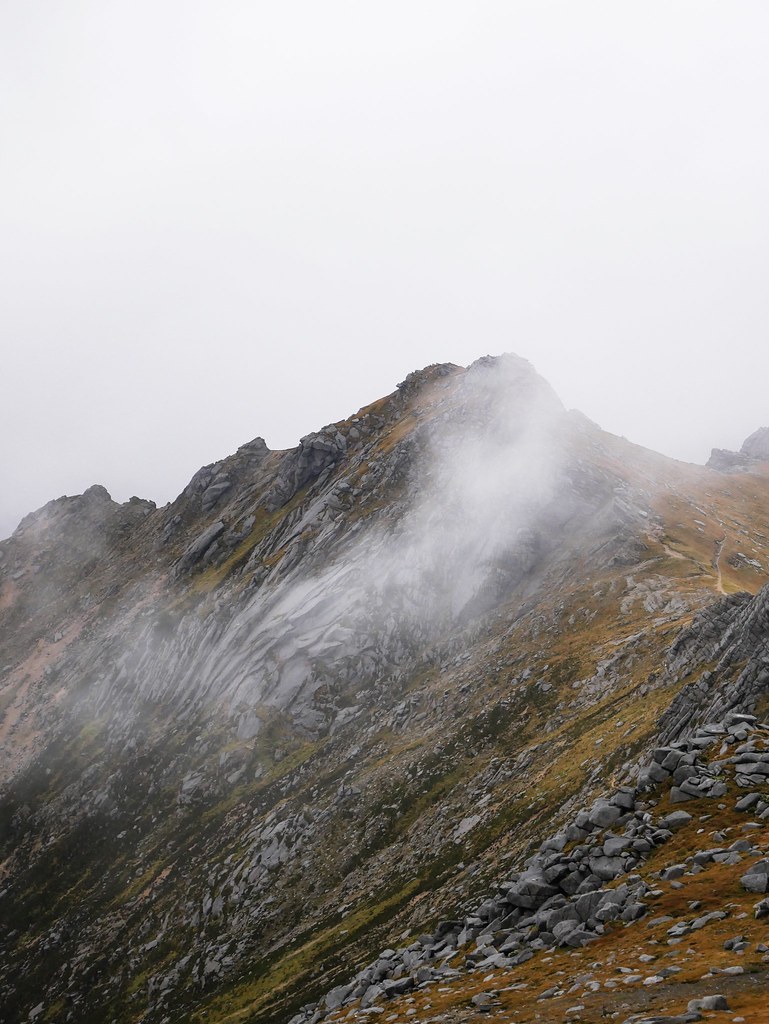 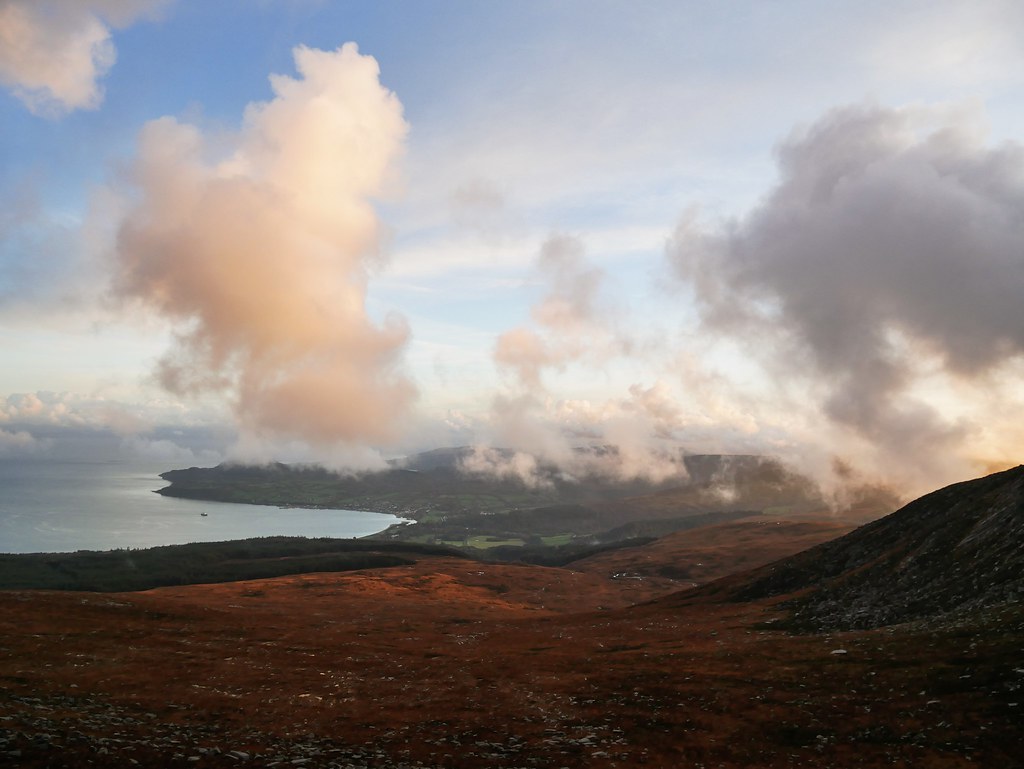 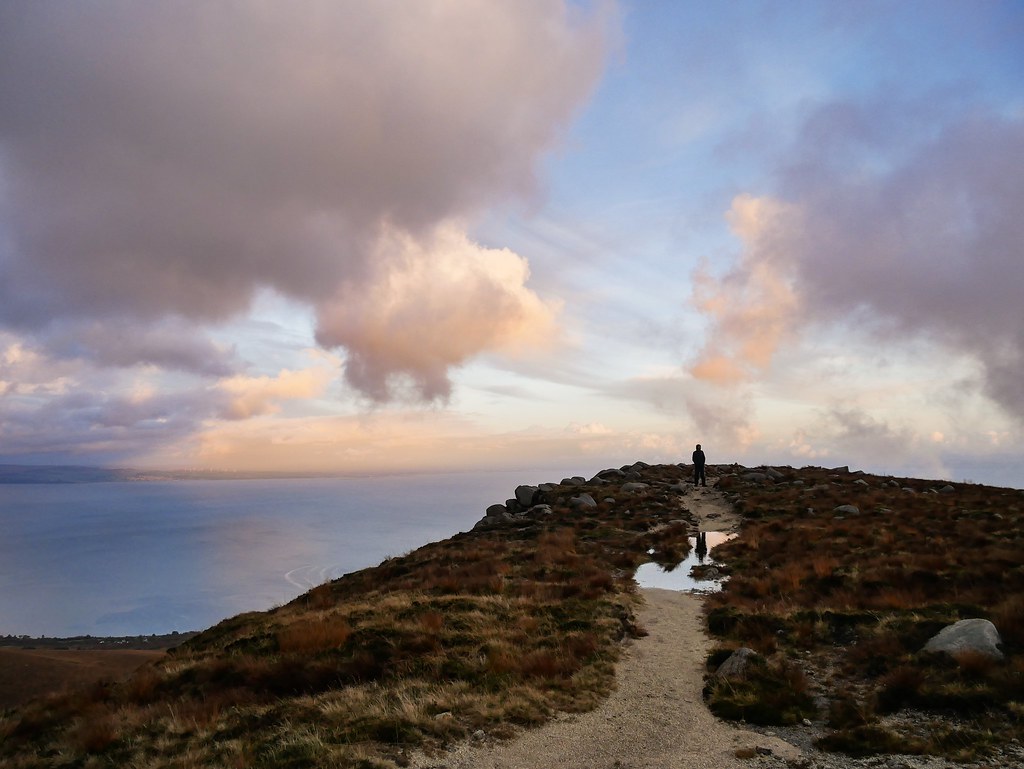 Even though I said I will never do the same hike twice we decided to re-attempt the Caisteal Abhail summit in the best weather forecast we had. I kid you not, we reached the top and this time we had even less visibility. I was so fed up with these mountains. It was our last mountain hike we’d be doing in Scotland but it certainly wouldn’t be one to write home about. We took a different route down this time, via the infamous witches step, a very prominent, rocky point along the ridge-line. As we scrambled our way down to the bottom of the step we noticed the cloud was thinning so we spent twenty minutes looking across the valley. The peaks stayed hidden but we got a few glimpses of the landscape…better than nothing I guess. We chose this route down as the last one we did was a horrendous, lumpy moorland route. Sadly this one was the same…but actually worse. My goodness we felt like we were bushwhacking and when we finally saw the gravel path we had a choice: take the longer gravel route or shortcut through the woods. It would only be about 30 meters through the woods but it was the most densely packed forest I’ve ever seen and we laughed at the idea of going through there. Somehow we’d probably end up getting lost in the forest and would have to make the most embarrassing mountain rescue phone call. So, the mountains of Aran continue to be a mystery to us…unless of course we’re not hiking up them, in which case there’s always clear fucking views. 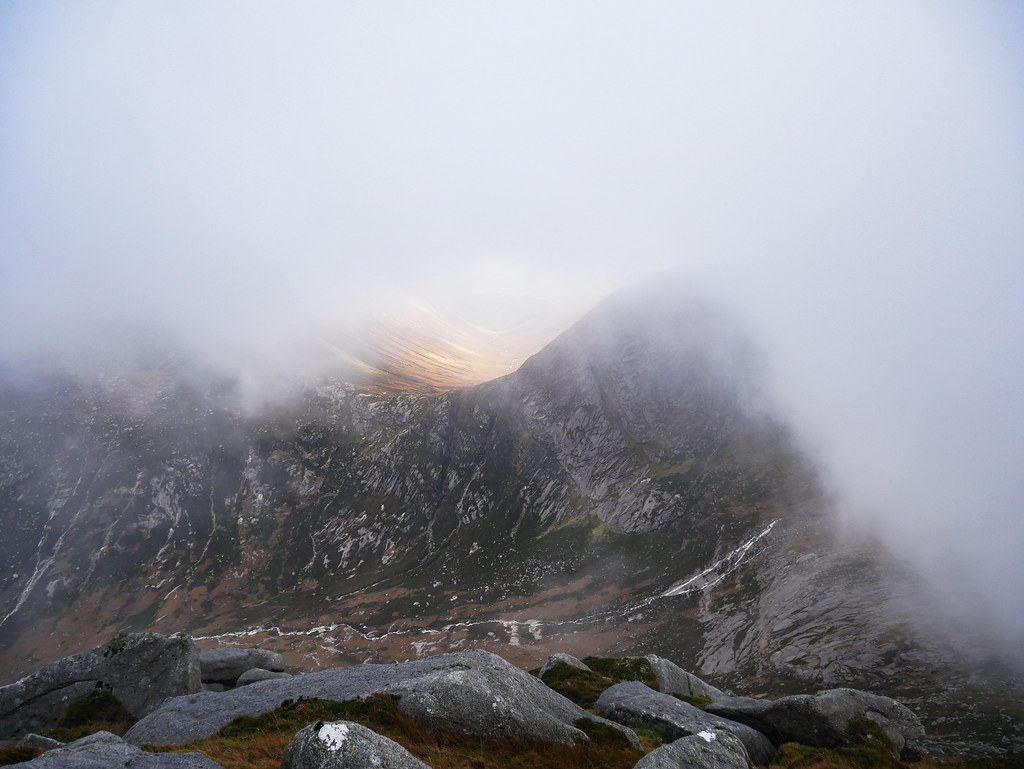 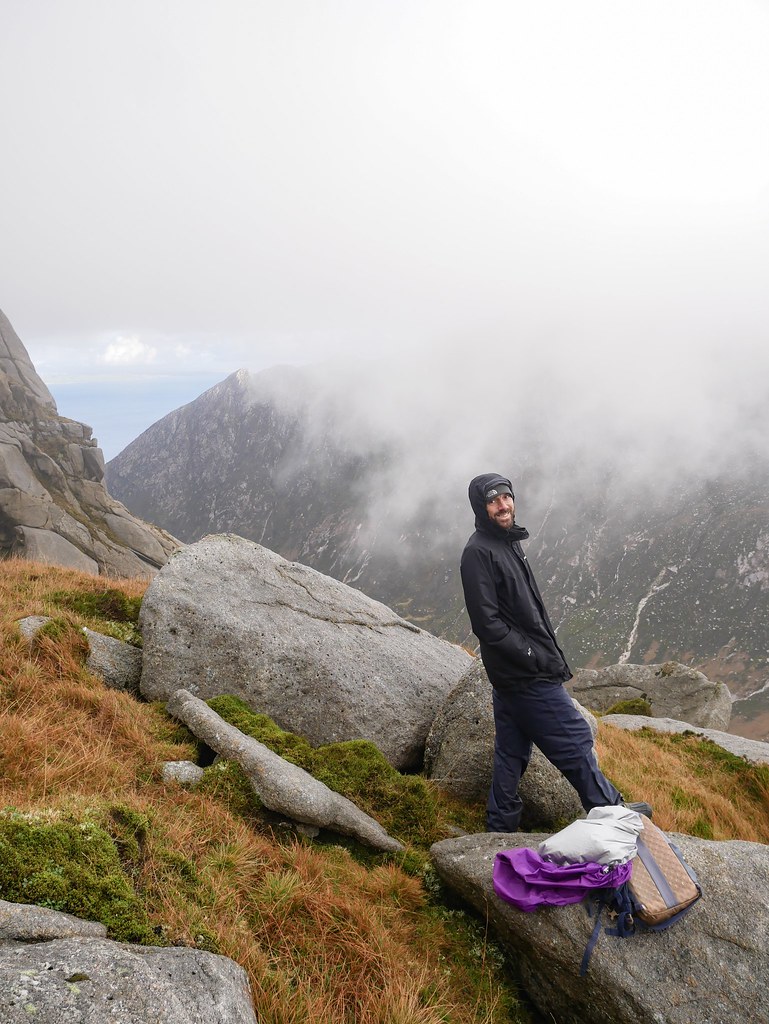 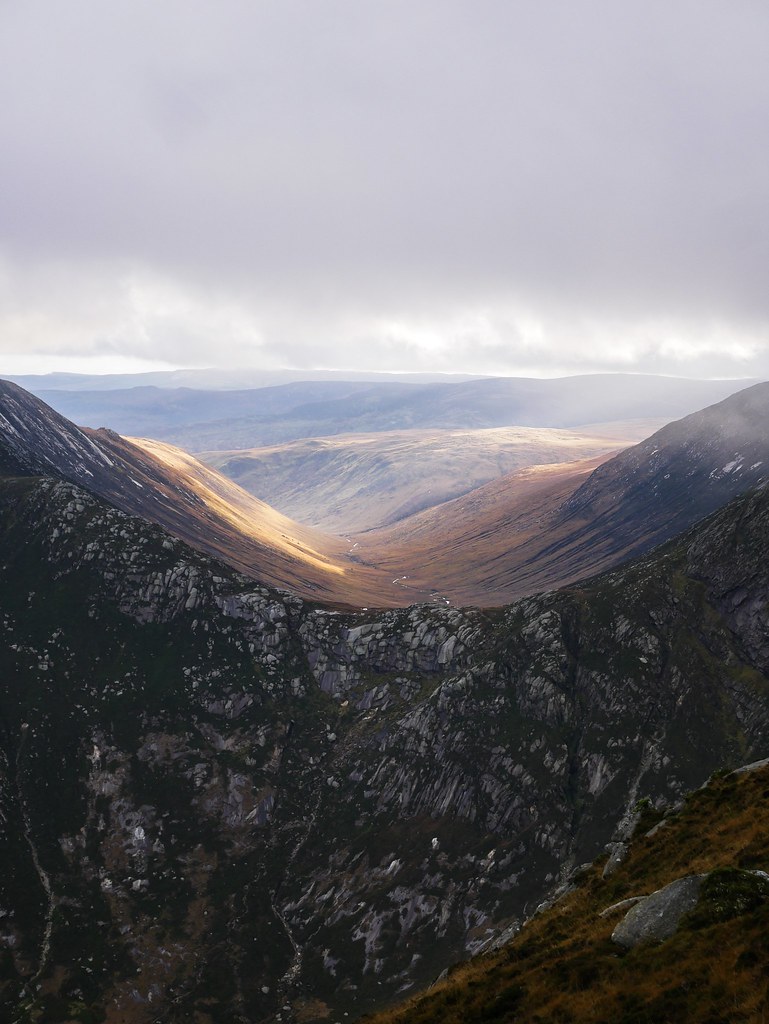 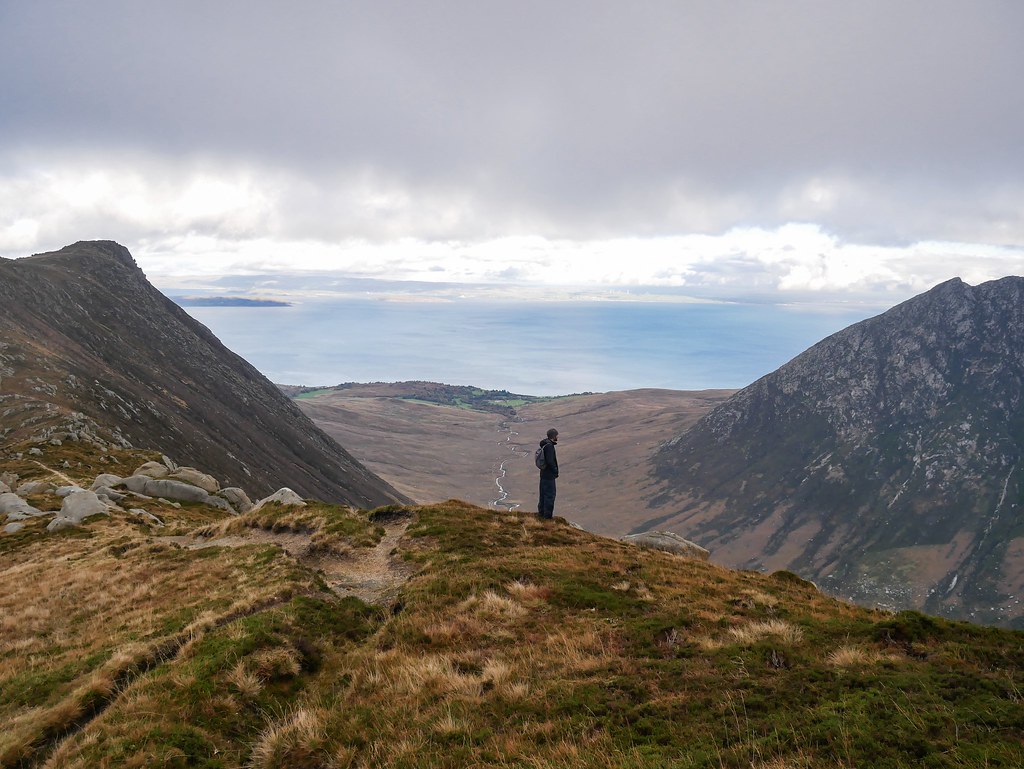