We’ve wanted to visit Ireland for years but we put it on the back burner because it’s so close to home and ‘it will always be there’. I guess we like to explore more exotic places while we’re young and healthy but due to covid we’ve been reluctant to go further afield. After spending 4 months road-tripping around Scotland we got the map out and tried to figure out where to go next. Our plan was to be home in England for Christmas which gave us a 6 week period spare and our options were explore eastern England or Ireland. In the end Ireland felt like the right choice so we booked onto a last minute ferry.

It was an 8am ferry but check-in started around 7 so we were very happy that we were able to sleep at the port the night before. It meant we could just wake up, drive up the road and have our breakfast while we waited in the queue. Well, it wasn’t quite that smooth, first we had to go through a security check point and the officers asked us to open Helga’s side door. I don’t know what I was thinking, I guess the early start made me go a bit loopy but I thought it would be hilarious to slide the door open and then raise my arms out wide to the officers saying “home sweet home!” When I got no response I dug myself a deeper hole and said “well, what do you think?” with a beaming smile like a proud mum. The officer finally (if a little reluctantly) complimented our van with a “it’s nice ay” and then we were asked to step out to have our bodies searched.

Breakfast in the queue involved Craig occasionally bursting into hysterics when he relived my behaviour to the police. I really don’t know what got into me, I love a bit of back and fourth banter but I got a tad carried away. Just as we started eating our crumpets piled with Nutella and banana I noticed car engines firing up all around us. Oh shit, they were starting to board the ferry and we were sat there with full cups of hot coffee and breakfast. We quickly moved our plates onto the floor, coffee mugs on the front dash and then I was in the back holding onto everything else. Needless to say I was getting rather stressed as we began to drive along, Craig wasn’t letting it bother him and causally sipped his coffee while navigating speed bumps. Once we were on the ferry we quickly finished eating our crumpets and necked our coffee. The sun was rising as we sat down but other than the pink clouds the two hour journey was rather miserable. It was a windy day and the sea was rough so we both felt extremely sea sick. I’m never actually sick but the feeling is awful. We arrived at the port in Larne and began our journey west along the coast road, searching for a nice spot to park up for another coffee.

One thing we quickly noticed in Northern Ireland was that many of the carparks had height barriers which was a big problem for us. Eventually we found a nice spot to pull up by the sea, rain and sun filled the sky in equal amounts which led to lots of colourful rainbows. After that little freshen up we made our way to Glenariff Forest Park. Instead of driving down a steep single track road we just opted for a pull out on the main road and walked from there. We followed a boardwalk through a sort of gorge until we reached a pretty two tiered waterfall. We passed a few people and gave them all a jolly ‘hello’ but we got such a poor response back. To be fair we don’t know if they were tourists or locals but it was a little strange how people seemed a bit grumpy. After an hour stroll through the forest we headed off on a pretty drive back through the valley where the sun was now shining on the green hills. 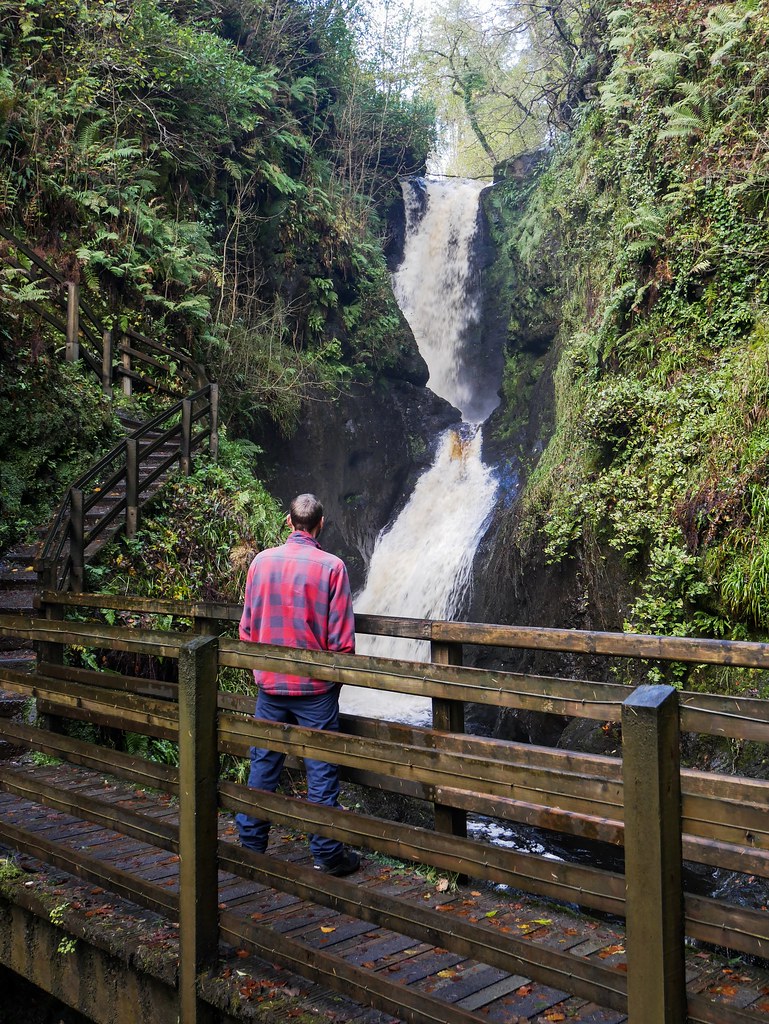 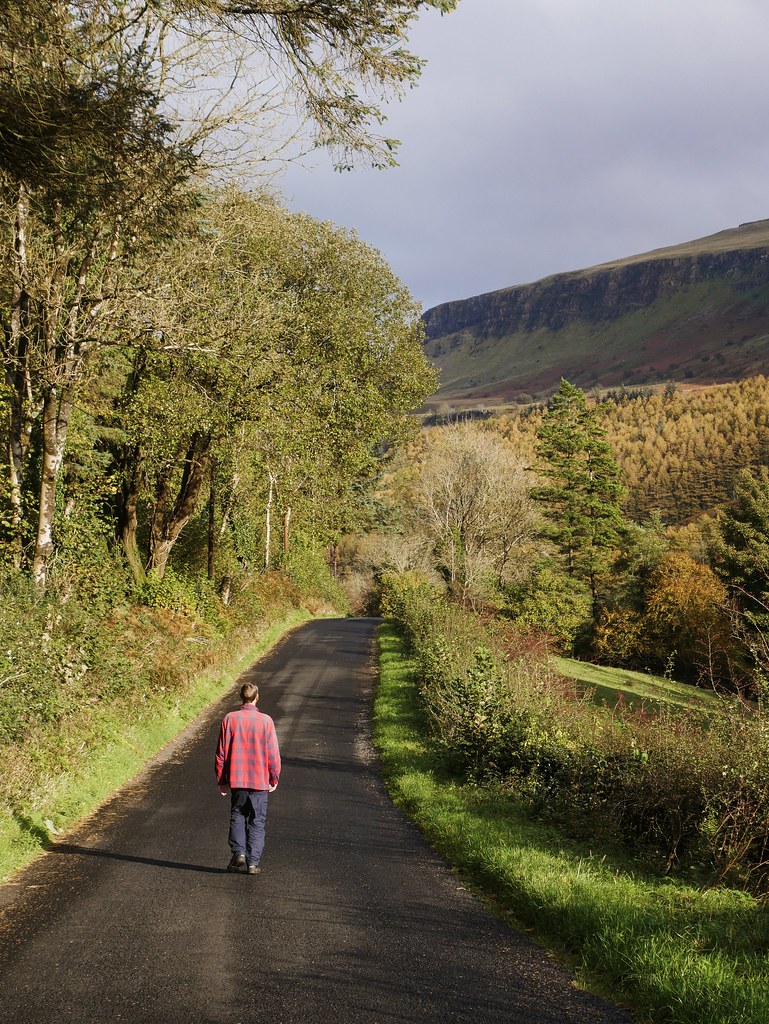 Our next stop was Kinbane Castle but we arrived to find it all fenced off and closed. It appeared many people had climbed around the fence so we decided to do the same. A pathway led us down from the cliff top carpark to sea level where there was a rocky mound where the little castle sat on the end. I don’t know why the route was closed, the castle was a bit boarded up like it was dangerous or getting repairs but the path down was absolutely fine. A few seals were swimming close to shore and after a little walk around the headland were headed back up to Helga. Craig said it was about 50 steps back up and I laughed, saying it was around 200 so he counted every step out loud, his voice getting quieter as he got up to the 40th step and we were only a quarter of the way up. There were just under 200 steps…did I count them all on the way down? No comment, all Craig needs to know is that I’m always right. 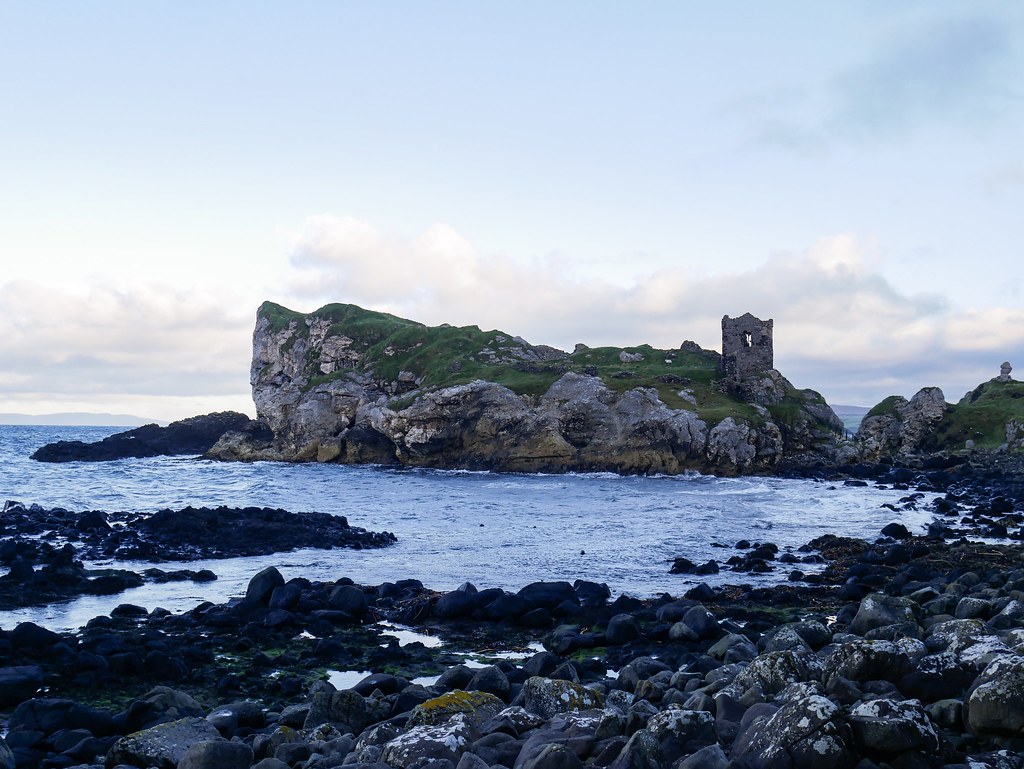 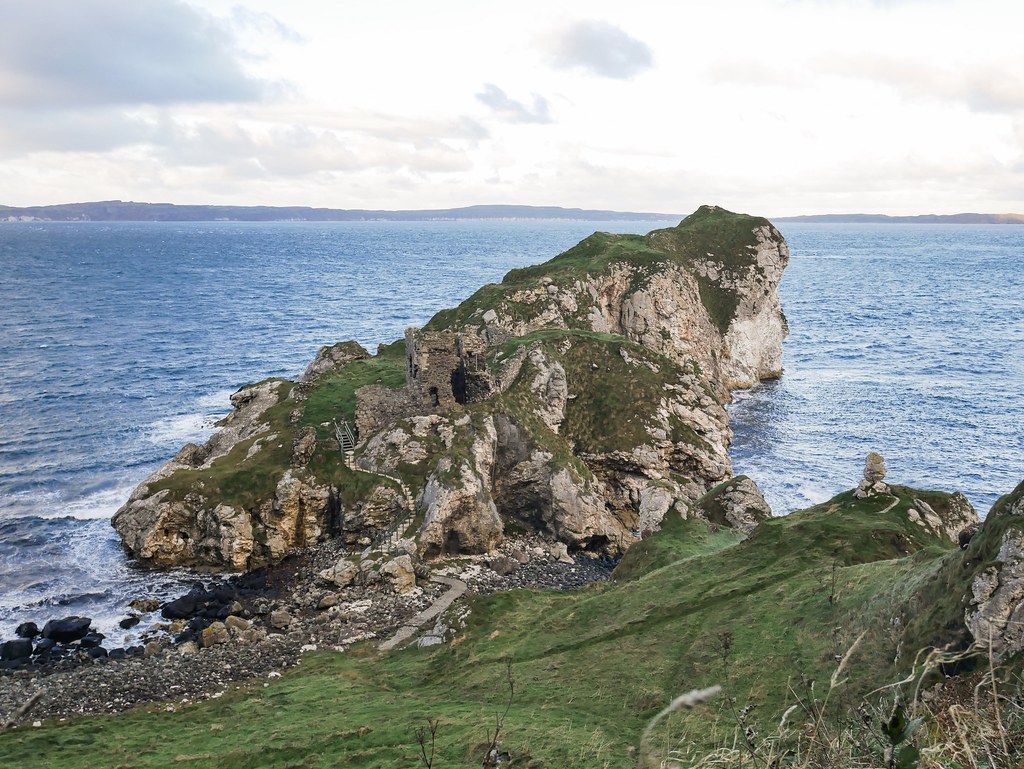 We decided to sleep in the carpark as it was such a nice quiet spot with sea views. Just as we were going to bed I scrolled on my phone and saw people adding photos of the northern lights happening right now in Scotland. We were on the north coast of northern island, in an area with very little light pollution so our chances of seeing them were high. It was cold and windy outside though so I just tried taking a wonky photo through our window, just to see if the aurora was visible in a long exposure photo and it was! Sadly by the time I got dressed and set my tripod up there was just an orange hue and lots of cloud around. From what I saw online it looked like we’d missed a very good show by just 30 minutes which was a shame as I think seeing them in Ireland is quite unique.

The following morning we drove down to Carrick-a-Rede rope bridge, a popular spot in summer but in November the carpark was almost empty. A strange thing happened as we drove down the road though, a car was driving up and seemed to want us to stop. We opened our window and he basically said we weren’t supposed to be down the road. Apparently there’s a height barrier at the top which would of prevented us coming down but unbeknown to us this chap had just opened it for a garbage truck. He said he had to lock it up again but we could go and do a walk and knock on his office door to reopen it when we’re done. So basically it’s another sight in Northern Ireland that we wouldn’t of been able to visit. Anyway, it was just a short walk to get a view of the bridge, the first bridge was built here in 1755 to facilitate salmon fishing. Due to pollution and fishing pressure out at sea the salmon population dwindled and after hundreds of years catching salmon here the last fish was caught in 2002. We continued our walk along the coast and a sign suggested it was used as a filming location for The Game Of Thrones, but we’ve never watched it so we didn’t really know what we were looking at. 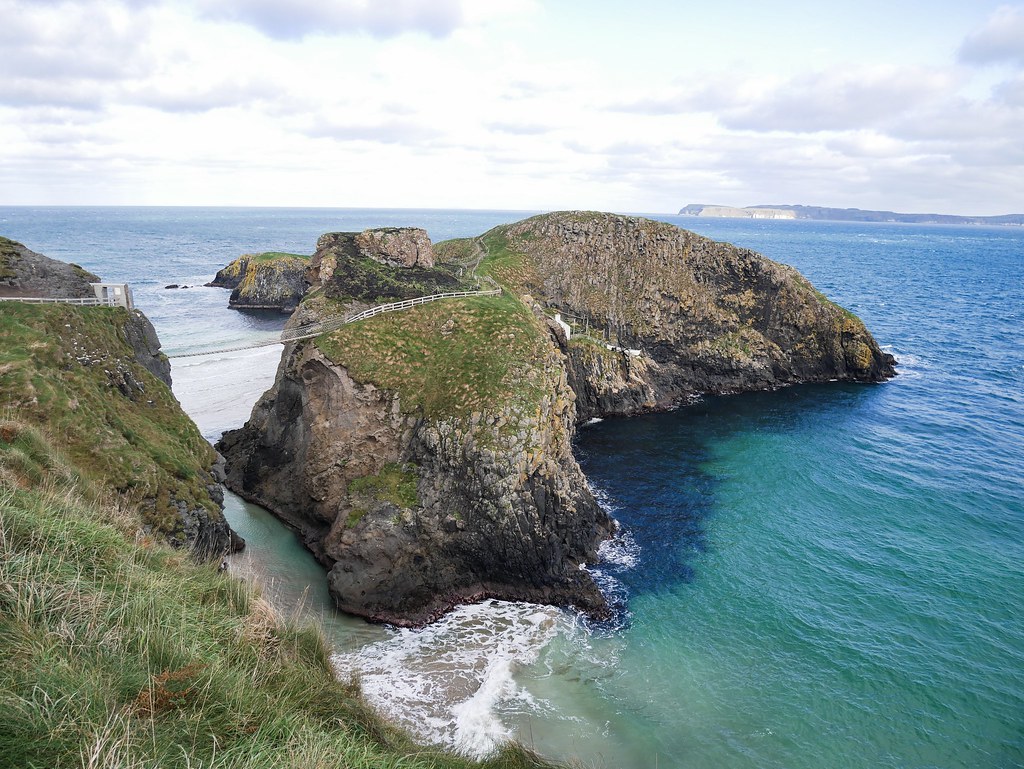 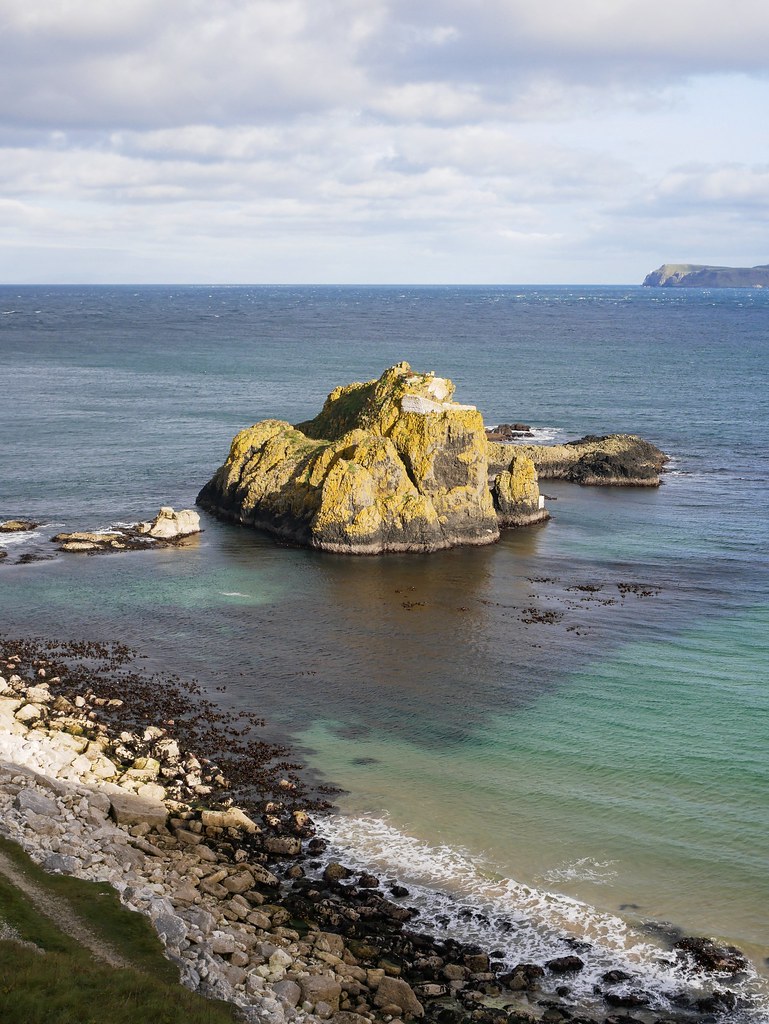 We still had a big chunk of the day left so we decided to make our way to The Giants Causeway, Northern Ireland’s most famous sight. Instead of paying the extortionate £12.50 per person parking fee we did a nice coastal walk to the sight from Portballintrae. The first beach we walked past had a dark brown river flowing into the sea. The sea was choppy so the white wash hitting the black water made it look like a sea of Guinness.

After about an hour we arrived at the Giants Causeway and began walking across the bizarre shaped rocks. The Irish say the rocks were formed by a giant called Finn McCool. Another giant called Benandonner lived across the sea in Scotland and he threatened Ireland. Finn didn’t like that so he hurled huge chunks of land into the water and eventually created a causeway to walk over to Scotland and have it out with his enemy. When he got there he realised Benandonner was a huge giant, much bigger than him so he scarpered back to Northern Ireland and dressed in disguise as a baby. This meant when Benandonner arrived and saw the huge baby, he realised it’s dad would be even bigger than himself so he panicked and ran back to Scotland, tearing up as much of the causeway as possible. So now these bizarre hexagonal rocks fade into the sea and reappear in Scotland. The scientific version, for those who don’t believe in giants is that the causeway was formed 60 million years ago when lava cooled and formed theses interlocking basalt columns. I can see why there’s a mythical story though because it just doesn’t seem possible for nature to create thousands of near perfect hexagonal shapes. 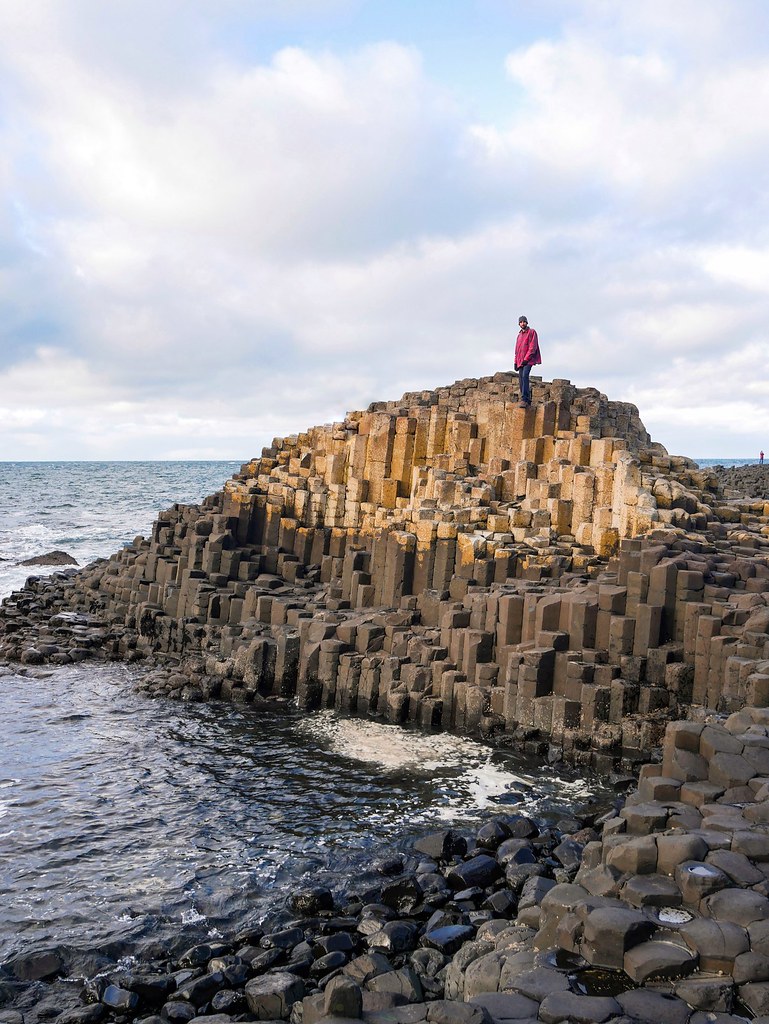 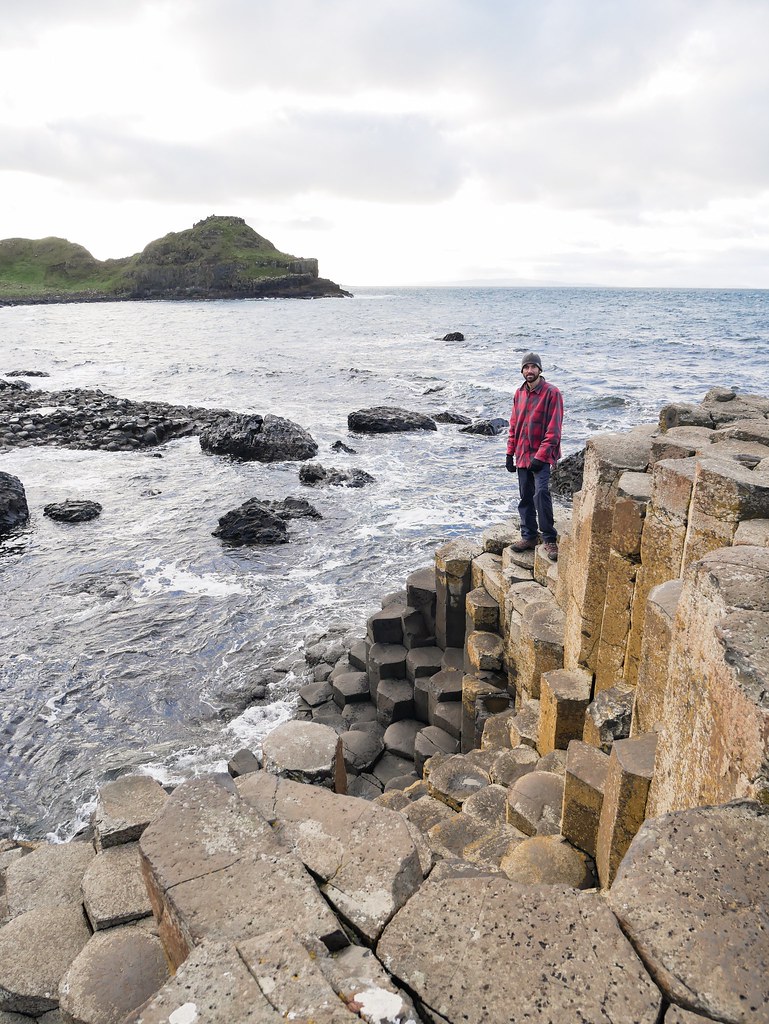 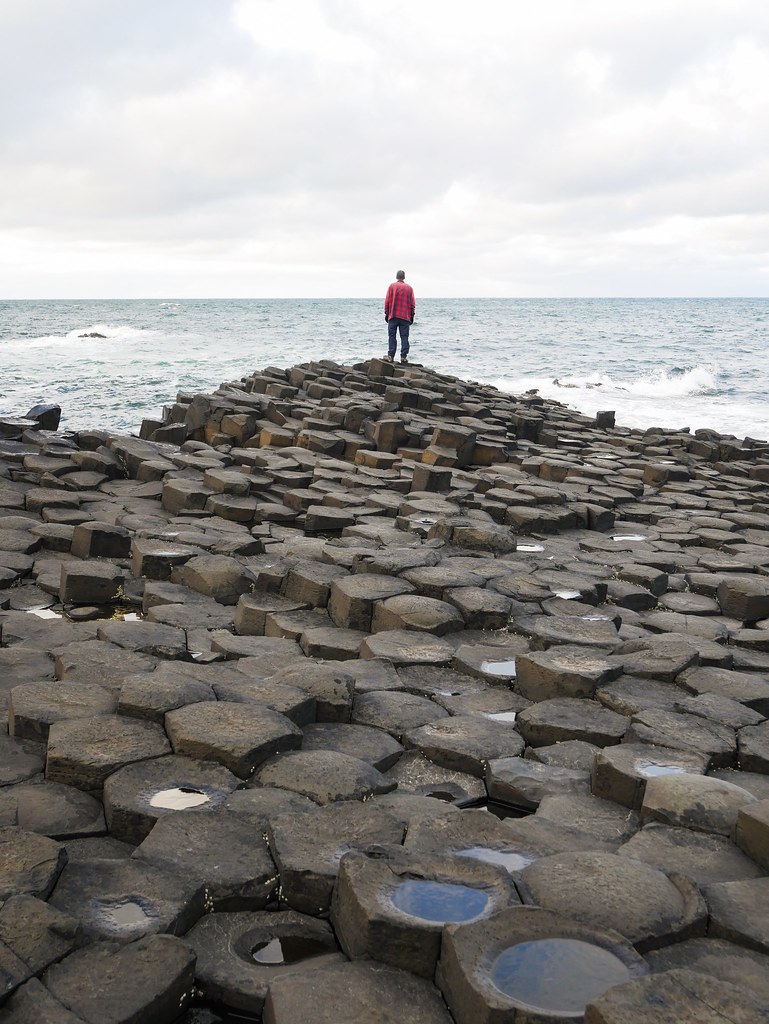 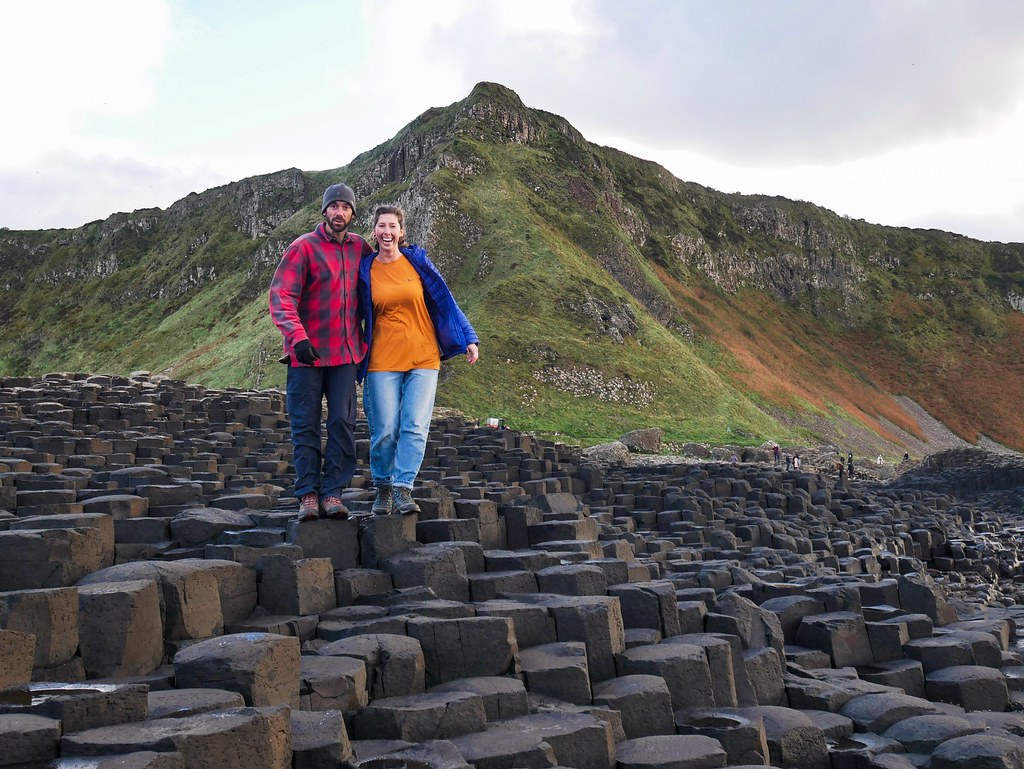 It was quite busy at the sight and we noticed a lot of American tour groups, but the car park was less than a quarter full so I can’t imagine what this place is like in summer. Luckily we were able to pick our times to walk across certain areas of the rocks and take plenty of photos. The rocks were a volcanic black colour and behind them was a grassy covered cliff that looked like a pointy mountain. Some of the pillars just looked short and stumpy while in other areas we could see they were meters high. We found it kind of strange how humans were allowed to walk all over them, we must be adding to their erosion? We made the walk a loop hike by heading up the cliffs and making our way back to Helga. 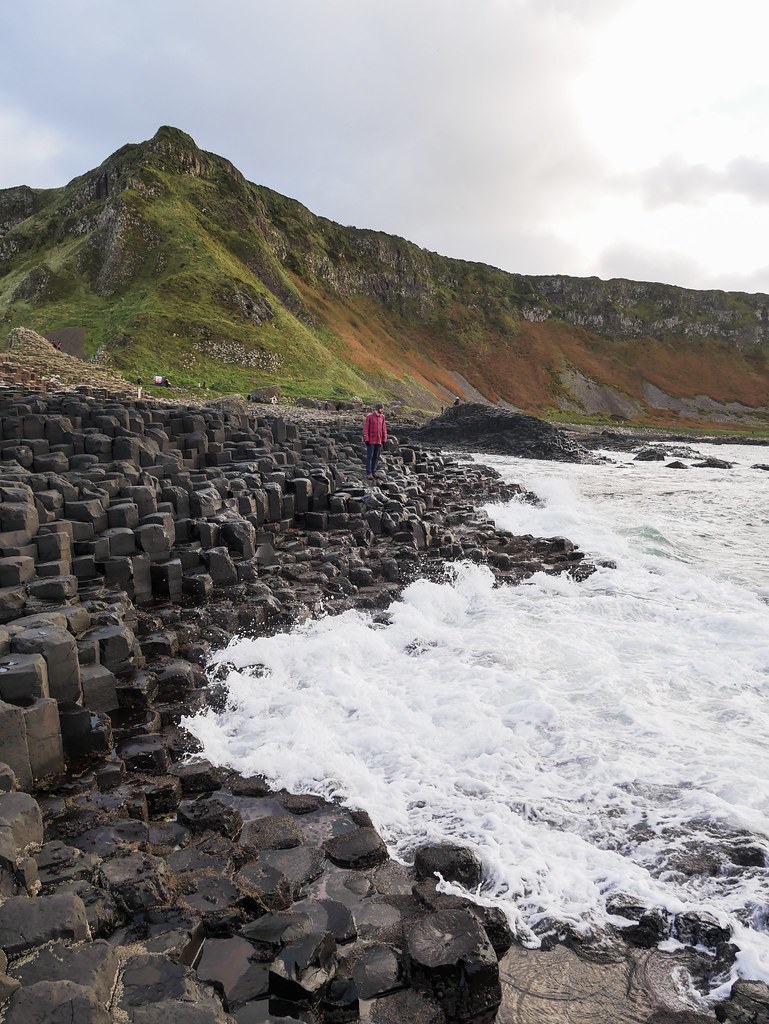 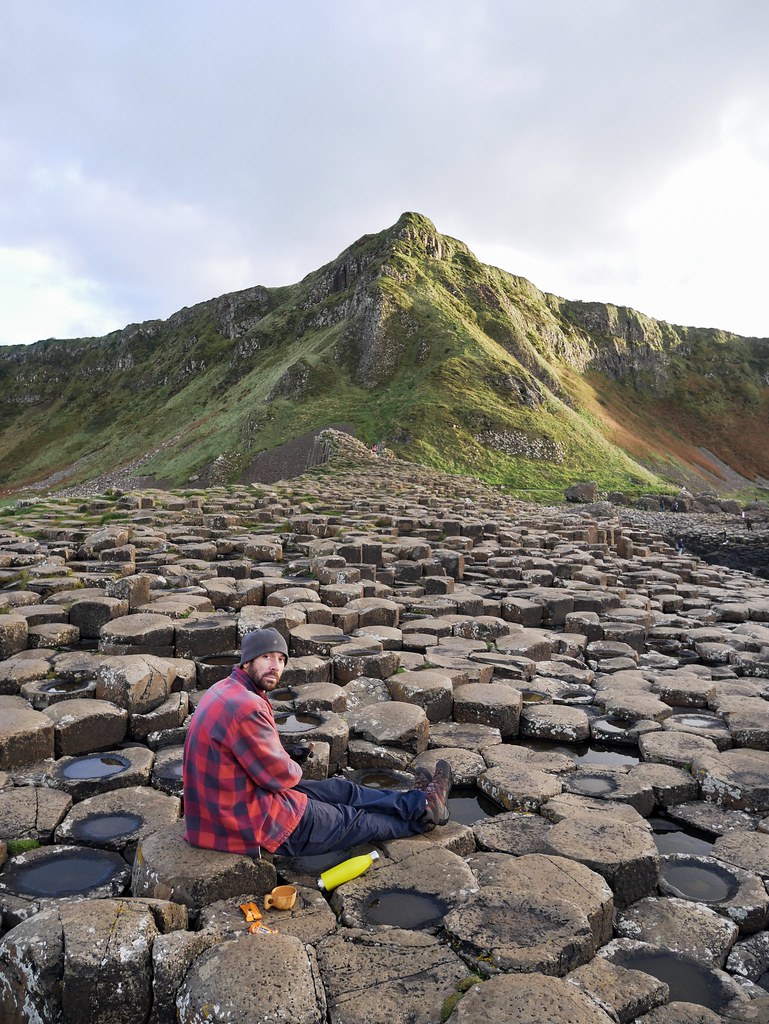 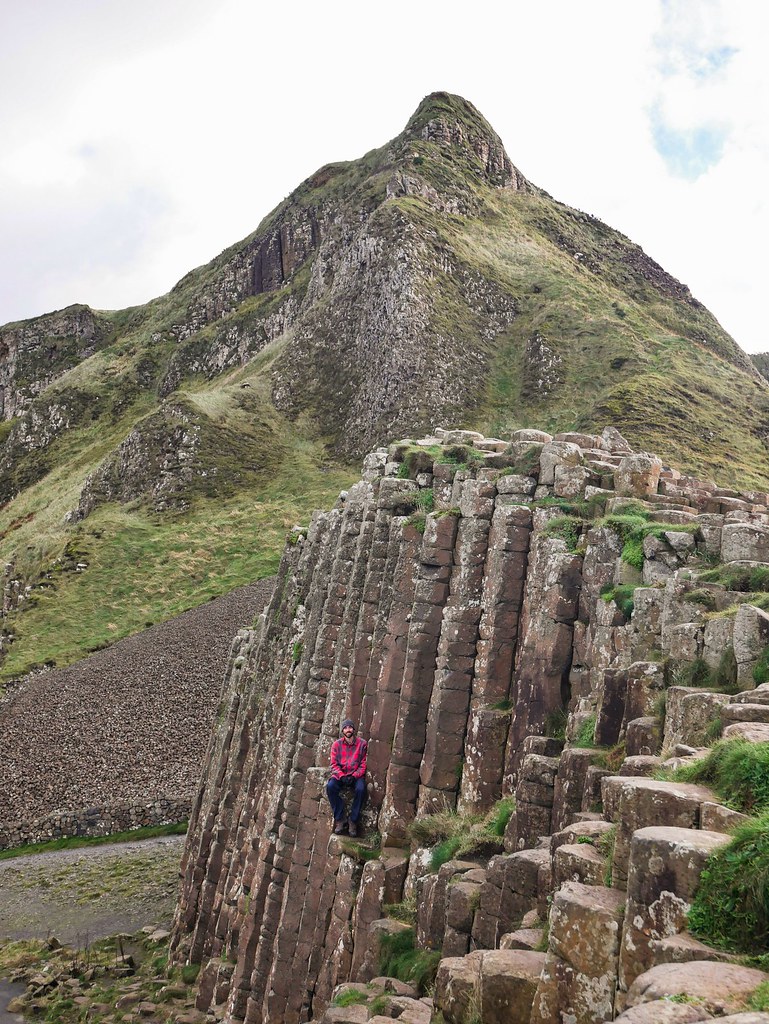 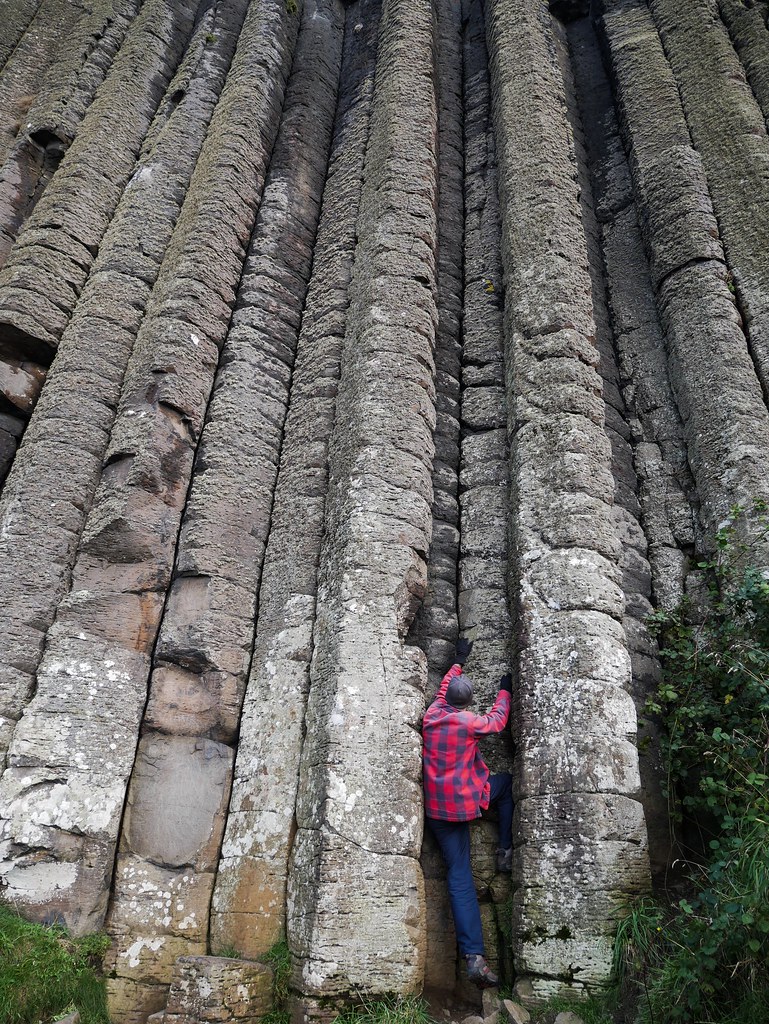 That night we ended up camping by Dunluce Castle which dates back to the 16th and 17th century. It seemed like a bad decision when the empty carpark started getting numerous cars pulling up at around 10pm. I hate staying in places like that but luckily they were all quite and there wasn’t any loud music…haven’t a clue what they were up to mind you, probably find out we were in a well known dogging location! When we woke the next morning we wanted to get a better view of the castle but the gate leading to it was locked so we continued up the road to a private farmers field. It said we had to call to get permission to walk across the field. We sort of felt like everything was against us in Northern Ireland, we’ve travelled a lot of places in the off season but it felt extra quiet here, but not in a ‘wow we have this place all to ourselves’ way, more like a ‘has there been a zombie apocalypse?’ way. We were also surprised to find so many height barriers preventing us from entering the coastal car parks. After just two days in the country we were ready to cross the border into the Republic of Ireland and start our journey along the Wild Atlantic Way. 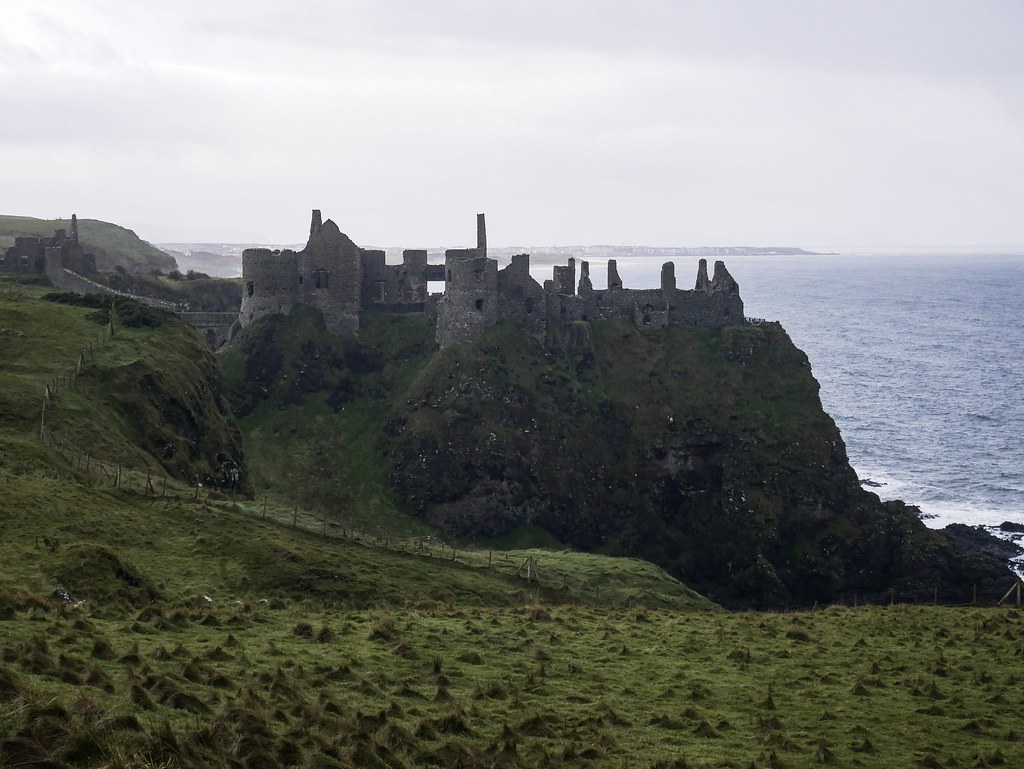