After a rainy day doing deeds around Fort William the sun started to poke out and the sky cleared. We decided to head straight to Glen Nevis, a valley surrounded on both sides by dramatic mountains. It was a very scenic drive with the evening sun casting a beautiful glow over the mountains. We pulled over and went for a little stroll to a waterfall and up a rocky hill to enjoy a view and a flask of tea. 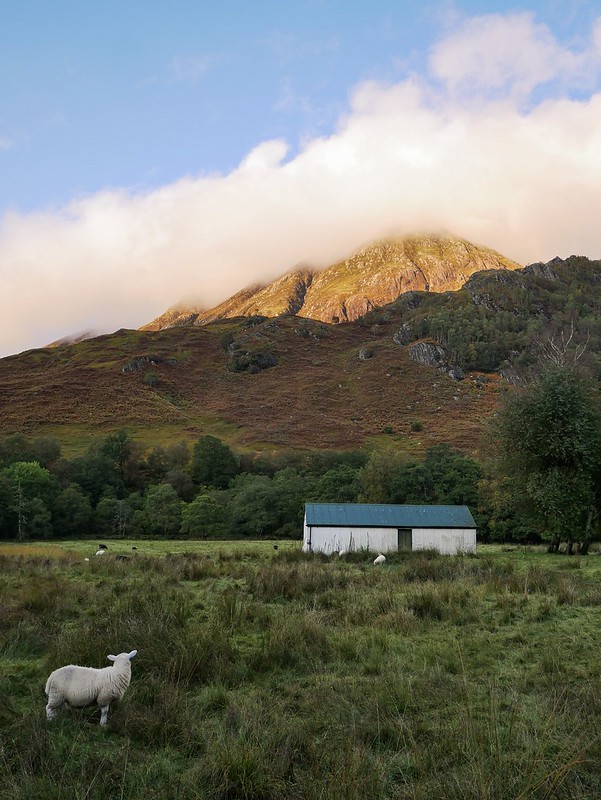 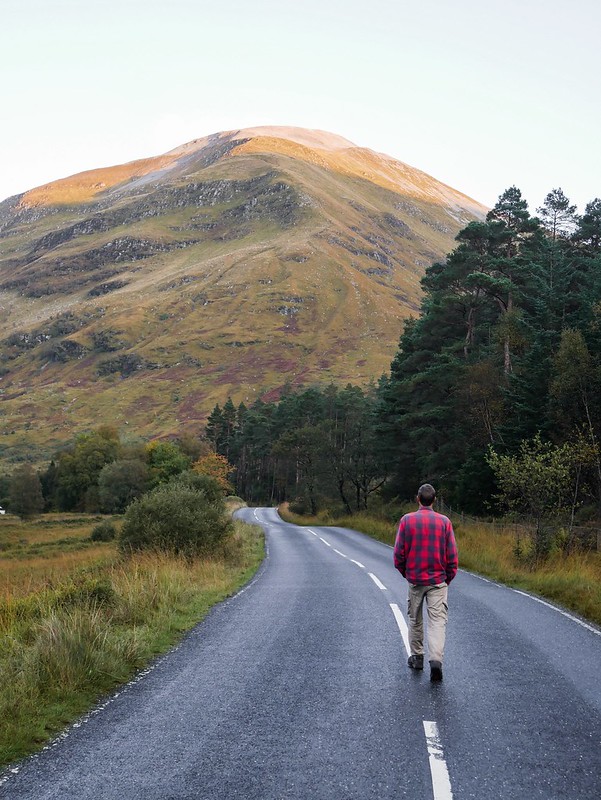 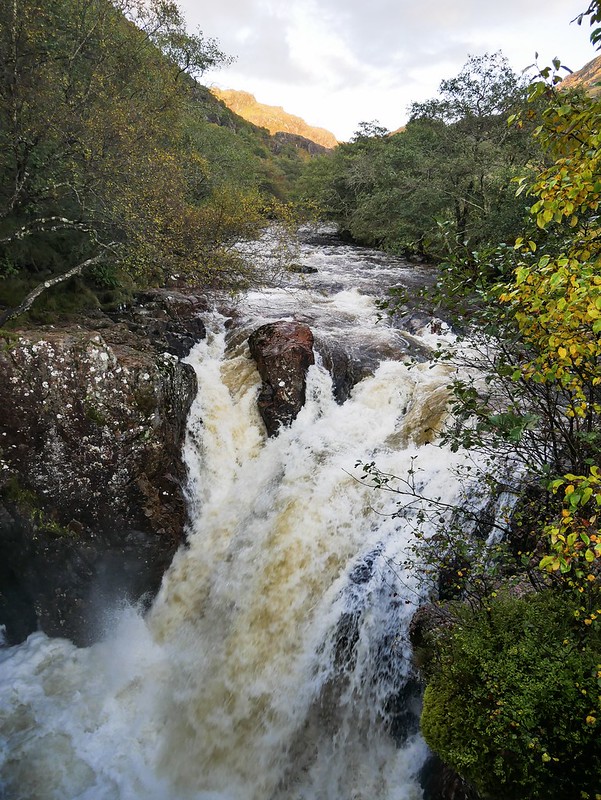 We were thinking about hiking up Ben Nevis the following day after our failed attempt back in 2014. It was spring and half the mountain was still heavily caked in snow. We got as far as we could and then we just sat in a pile of snow sipping hot coffee out of our little china mugs (who the fuck hikes with china mugs?!) We watched as people walked past us with crampons and ice axes. This time there wouldn’t be snow, but the weather is so cruddy lately that cloud cover on the summit was almost guaranteed. We also didn’t want to take the tourist route up, but the more challenging traverse would take 10-12 hours to complete. It just didn’t seem worth the long climb to not get any views from the top. So instead I picked a slightly lower altitude mountain to hike. It was called Stob Ban and it sits on the Mamores ridge line. 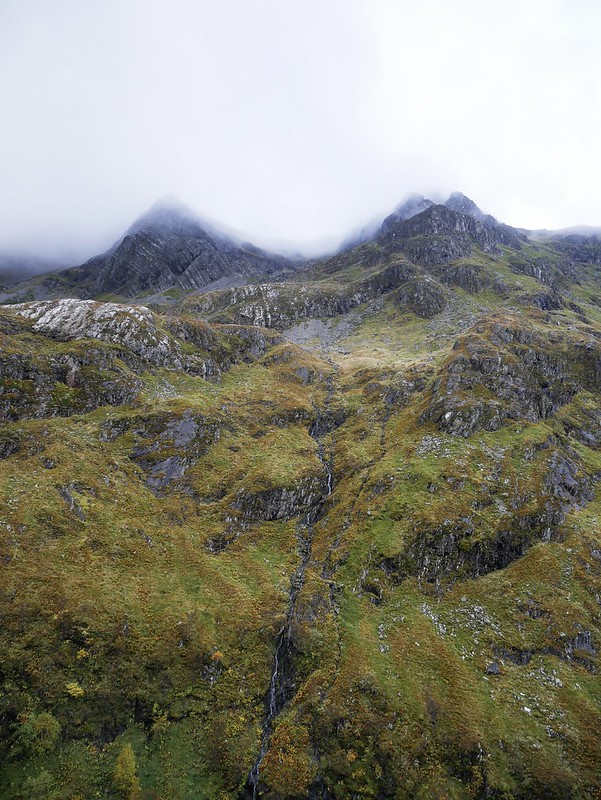 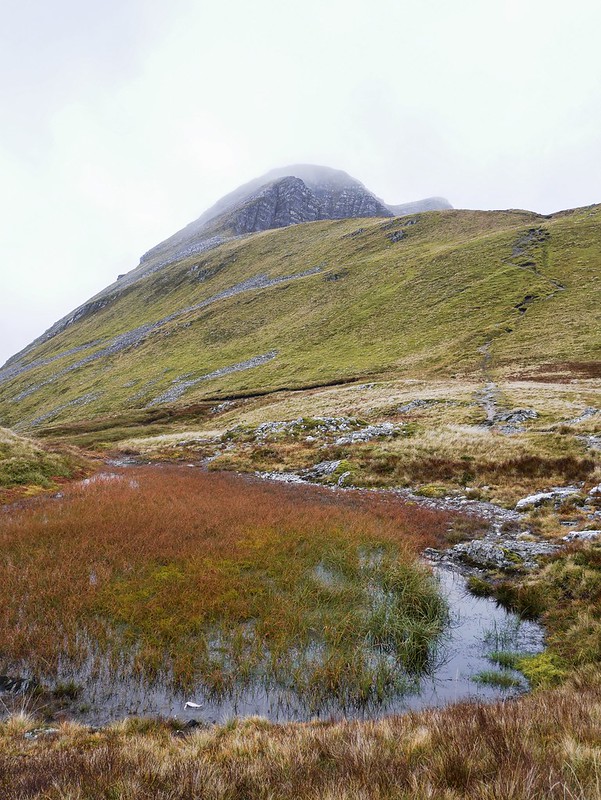 On our way up we could hear a strange noise. It sounded like sheep or cows up the valley but we couldn’t see any. We thought it might be deer bugling but we couldn’t see any to prove that theory either. After climbing uphill for an hour or so Craig spotted a couple of stags across the valley, it had been deer making the noise after all. There were a few clouds drifting over the summits and rain showers kept passing through so it wasn’t ideal weather but we persevered on. The mountain ahead of us was looking pretty impressive already with its summit covered in white quartzite rocks. Sadly as soon as we reached the top we were engulfed by cloud and we couldn’t see a thing. We had a 3km ridge to walk along to the next summit and the weather was wild up there with gusting wind and driving rain. It did occasionally clear though and we got glimpses of the view here and there which made the hike worthwhile. We also managed to spot a herd of deer and this time two big stags were locking horns and one was being aggressively charged down the hillside. It was really far away though but still great to witness. As we began our decent Craig veered off the track to look for the herd and he spotted them way below us. Sadly I was a little noisy, we were still so far away I didn’t expect them to hear me but they all began running through the valley. It was quite fascinating to watch, maybe 30 females and younglings with a few stags that had massive racks. 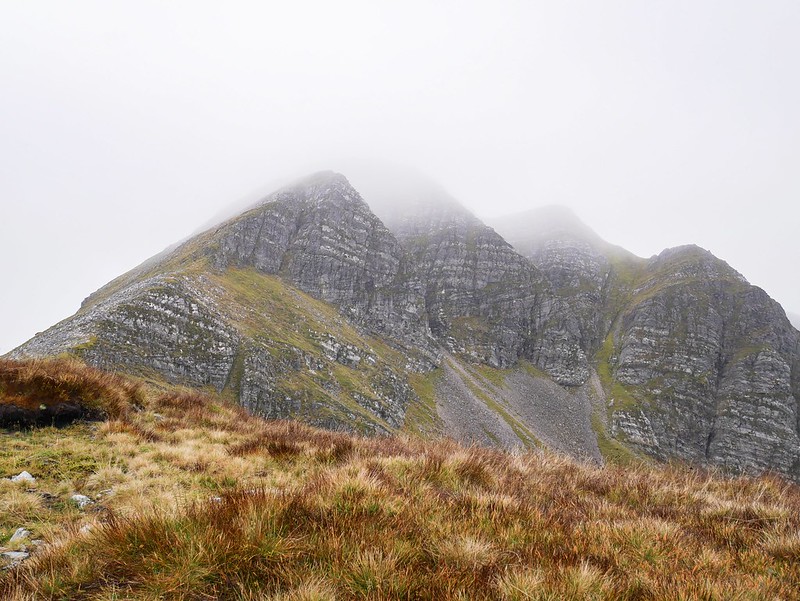 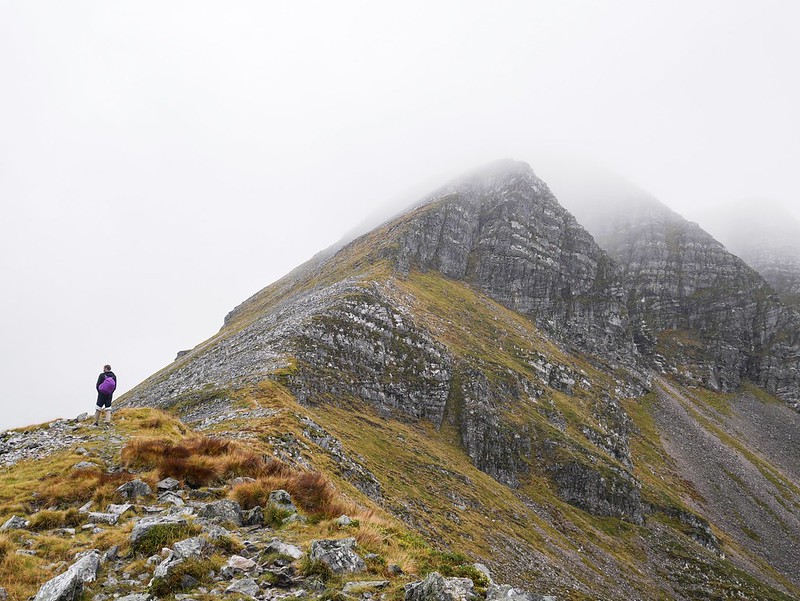 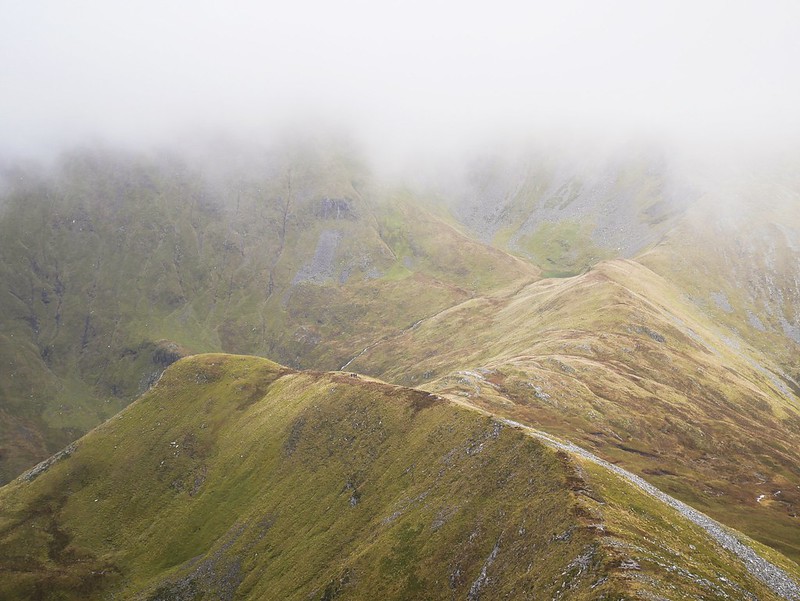 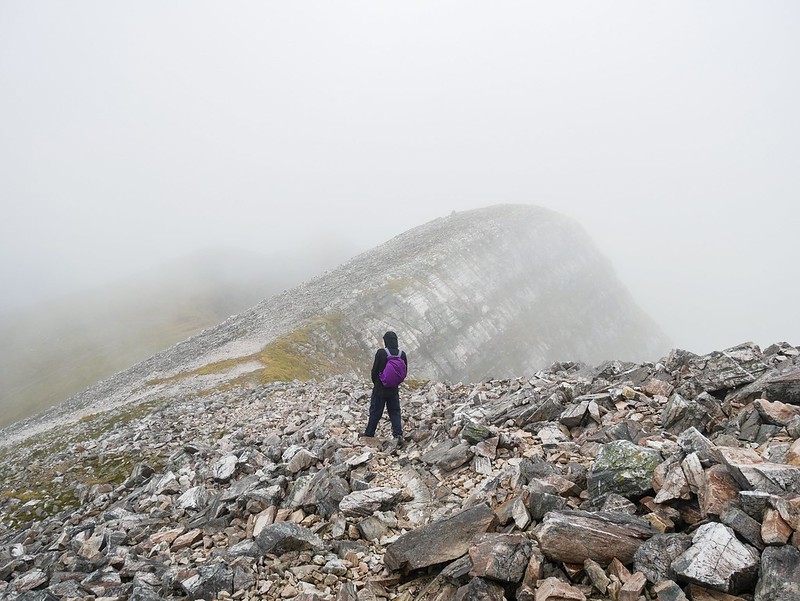 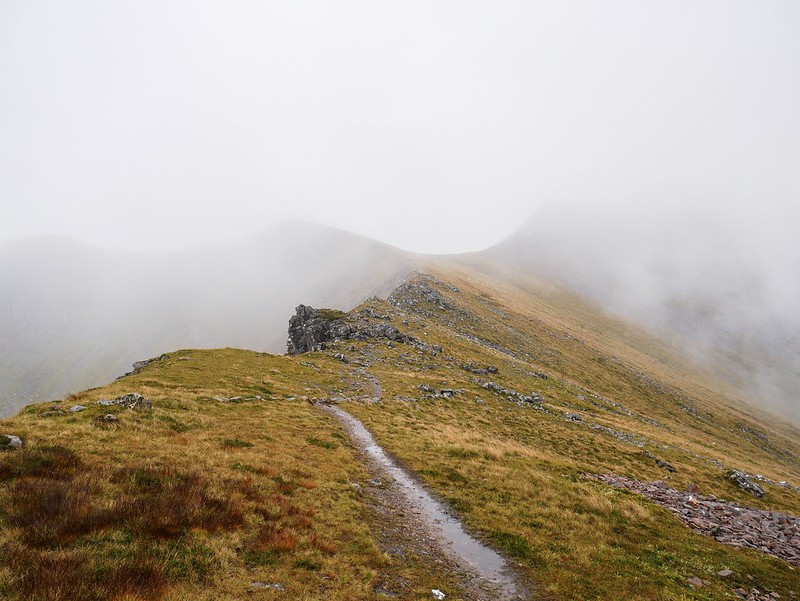 The route down was a bloody nightmare, we had unavoidable bog and our boots were soaked through. Mine were on their last legs already with holes in them and a lack of tread but now they weighed a ton due to them being so waterlogged and they smelt awful from never drying properly. So that was their last hike. 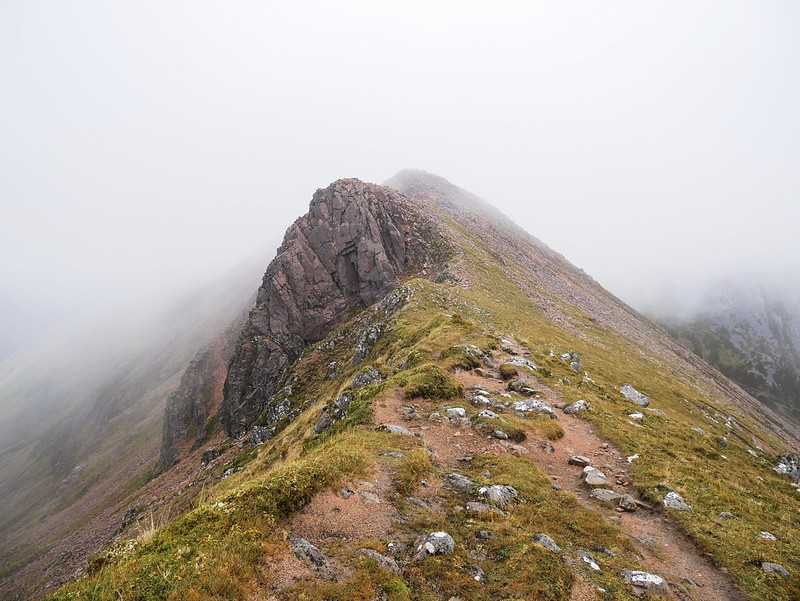 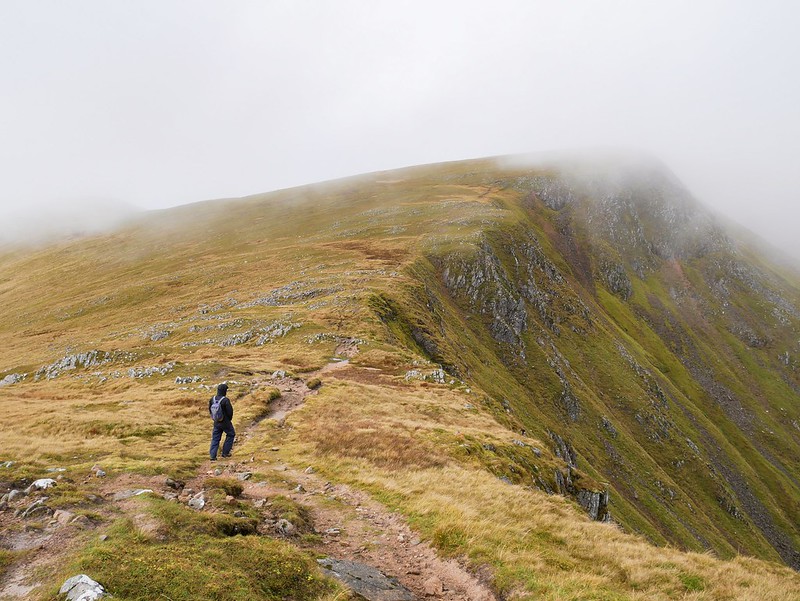 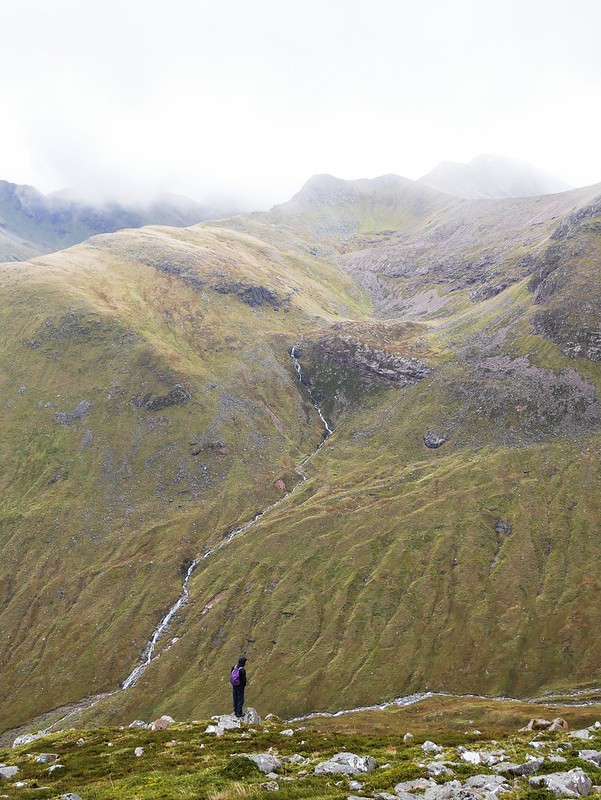 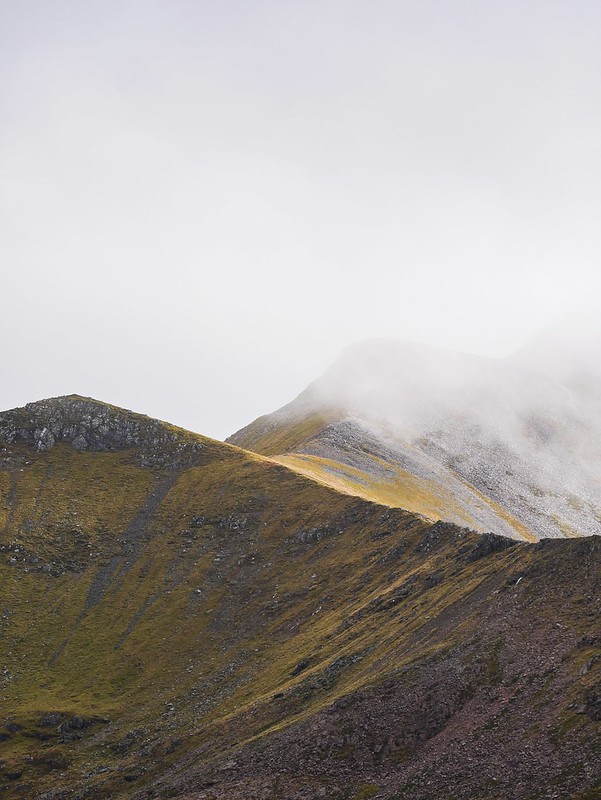 The next morning we continued up the Glen Nevis road all the way to the end where a trail led through a sort of gorge. We just fancied a short walk today so we headed up to Steall Falls, Scotland’s second highest water fall at 120m. The fun thing about this hike is a unique cable bridge leading across the river. It just had a thin cable wire to walk along like a tight-rope and two more cables higher up to hold onto. It was a lot more wobbly than I expected and felt surprisingly high above the river. We spotted a couple on the other side of the bridge who we’d seen in the carpark with a whippet but we couldn’t figure out where their dog was, then we realised they put the wee thing in their backpack so they could traverse the bridge! I think my mums whippet would be quivering for days after that experience but this whippet was in adventure-mode. 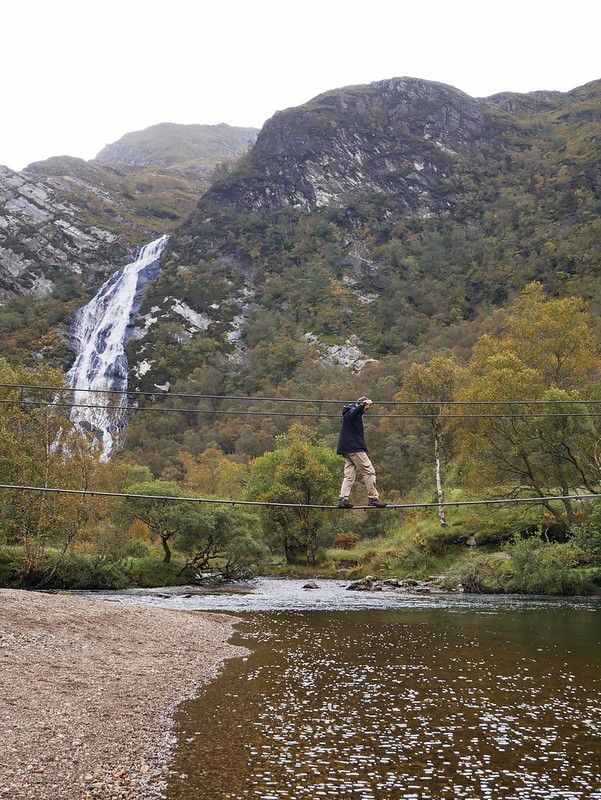 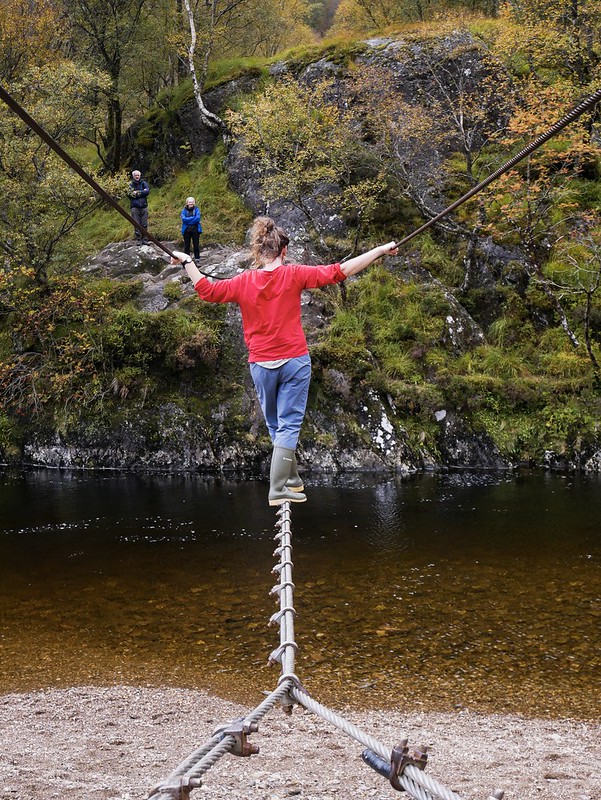 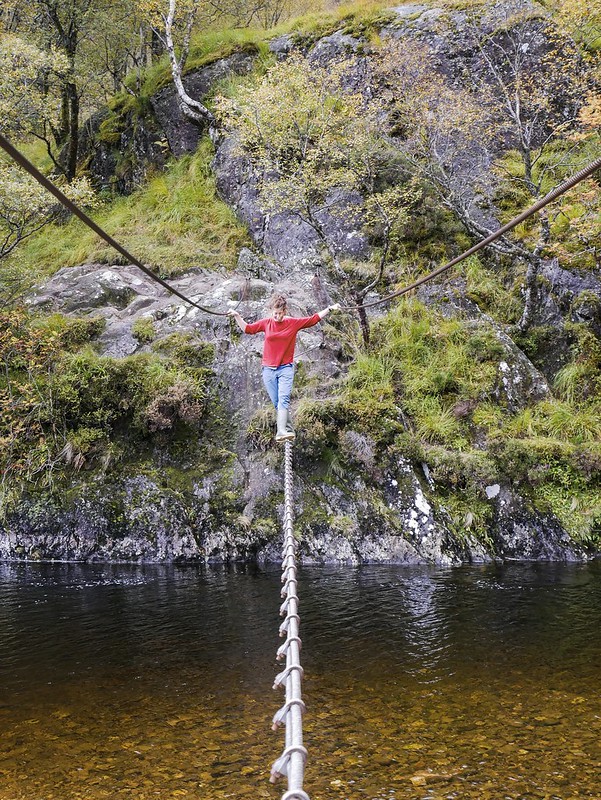 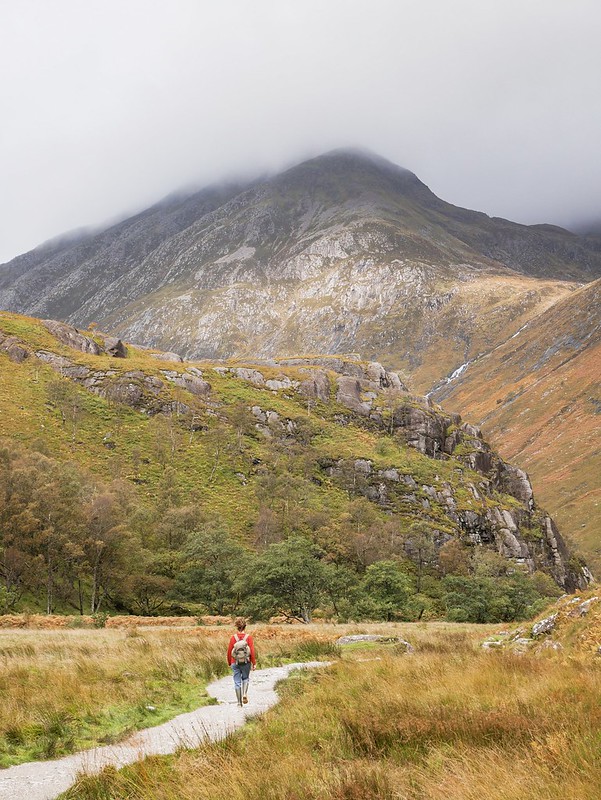 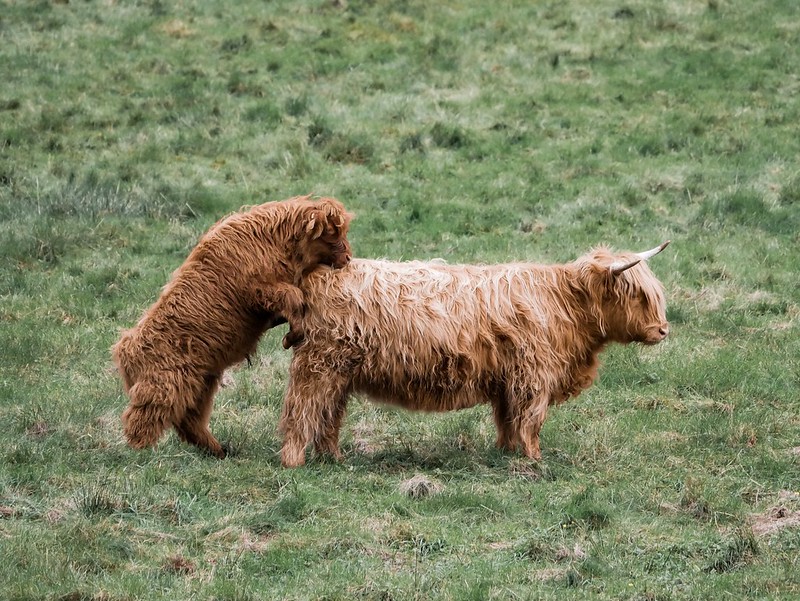 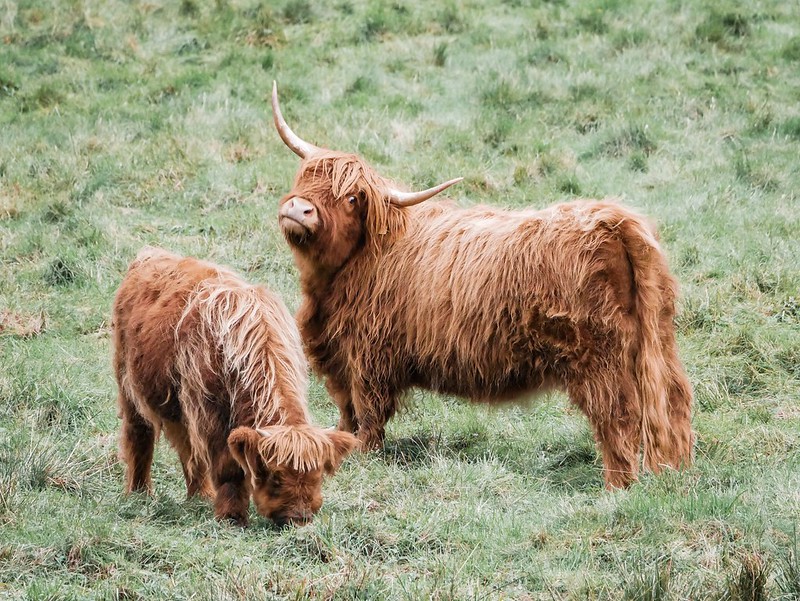 After doing some deeds around Fort William we drove down to Kinlochleven. The mountain had low lying cloud clinging onto them and drizzle was imminent, so we opted for a valley walk. It felt quite strange not climbing up a steep mountain but the gentle valley made a nice change. We were walking along an old gravel track that wiggled it’s way through the moorland like a slow moving snake. The sound of deer bugling filled the air but no matter how many times we stopped and scanned the hills we couldn’t see any! We ended up walking quite far, it’s always hard to know when to stop when it’s an endless path into the wilderness, so we headed back and took a different route through some woods where the ground was covered in colourful mushrooms. The roar of a nearby stag kept us on our toes, he sounded really aggressive and close by but we never caught sight of him. 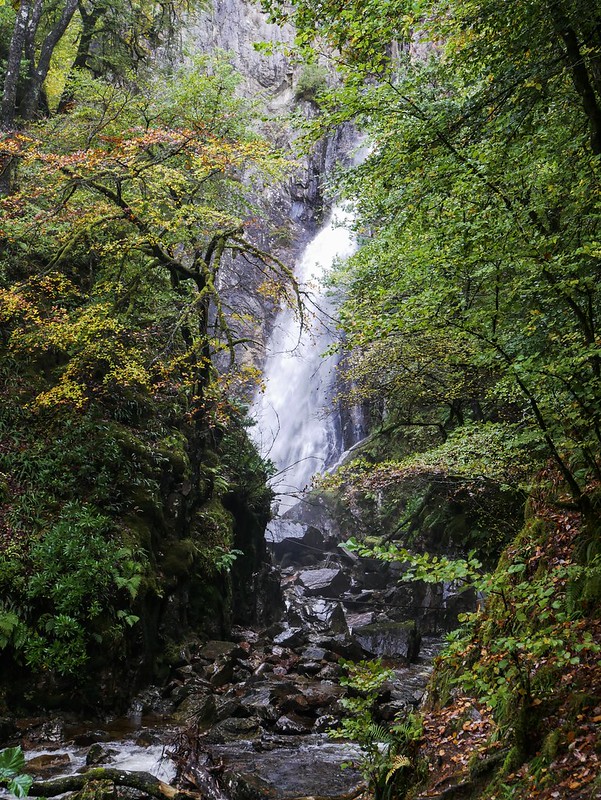 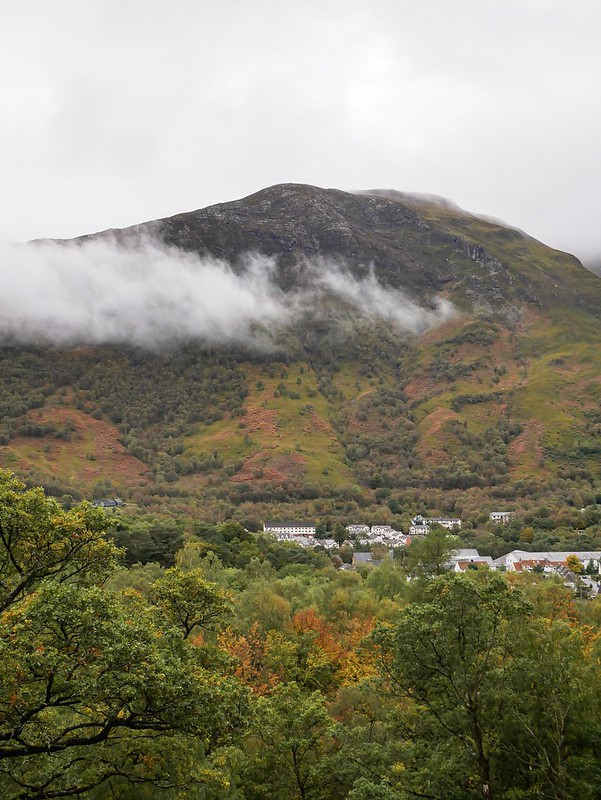 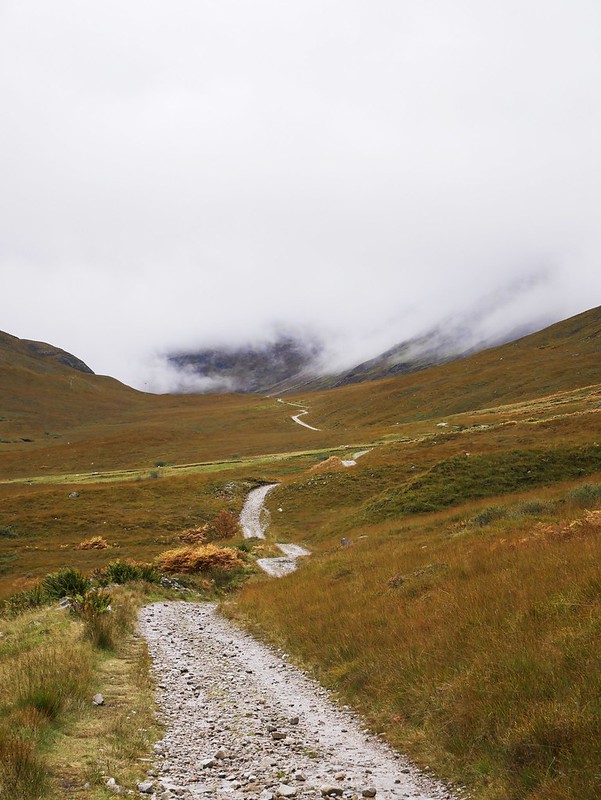 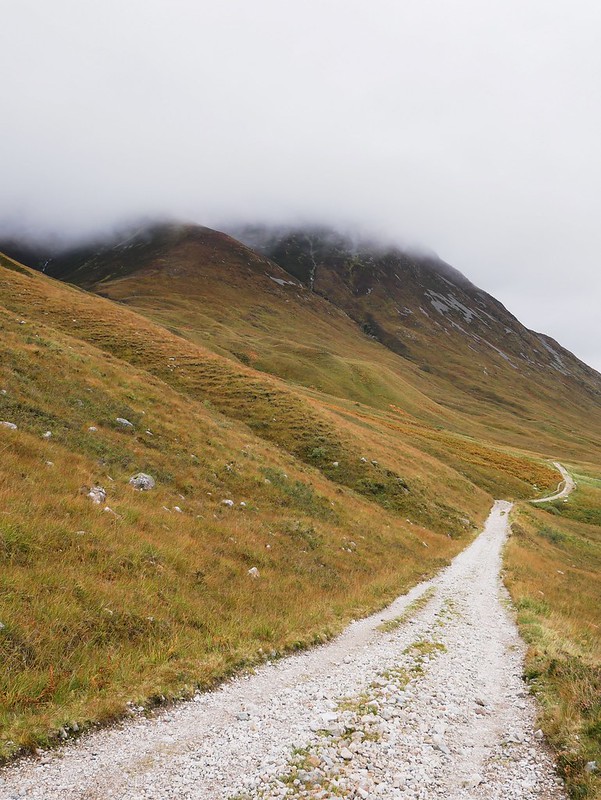 That evening all we could hear was the sound of the stags roaring across the hills. It’s such an exciting sound, raw and wild, but judging by the fact that we still didn’t see a single deer we wondered if the locals were playing the sounds out of a megaphone. 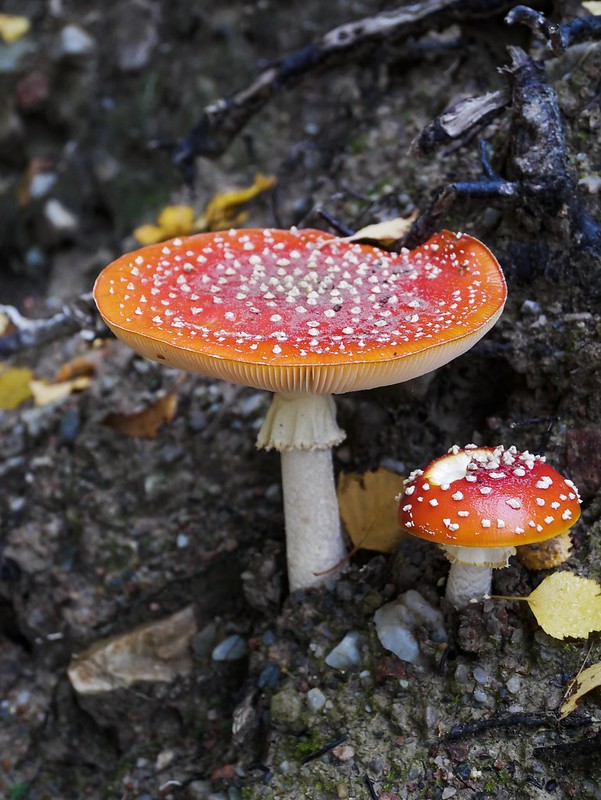