We lived in Scotland back in 2014, it was an impromptu decision after quitting our job (which included accommodation) on the spot. The next day we packed our life into our little banger of a car and drove to the New Forest to camp in a tent while we figured things out. We ended up finding a volunteering position in a canal side cottage north of London. When we arrived the host was in the middle of making onion chutney in the lounge and it was literally everywhere like some sort of science experiment gone wrong. The eccentric host also collected any roadkill she found and either cooked it or turned it into a taxidermy art piece. I found out about this when I came across a squirrel in the freezer. We lived in a large tent in the garden and there was another volunteer who stayed in the main house, an American who casually told us he’d shot someone once. It was a bizarre month we had there but we finally found a new position helping at a Manor House in the Scottish highlands.

It wasn’t exactly a great place for winter, the whole area turned into one big bog and on day one I fell into a boggy pit up to my knees – if you’ve seen The Vicar of Dibley, picture Dawn French falling through the deep puddle! We spent our days gardening, pruning the rose garden, cleaning the chicken and duck coop, cutting logs and cleaning the hotel rooms. But it wasn’t all bad, we experienced some proper Scottish ceilidhs where they dance so aggressively that people are thrown to the floor, only to briskly get back up and continue dancing. On New Years Eve they had a huge party with a firework display…in gale force winds. Every firework flew back towards the house where the crowd of people were standing and men were brushing sparks off their kilts!

Anyway, we were quite excited to return to this area and relive some memories. The ferry took us from Skye to Mallaig where we drove down to the Silver Sands of Morar. It’s a gorgeous sea inlet with endless white sandy beaches and turquoise water. We enjoyed a stroll to the lonely beaches and then camped in the area, ready to explore more the following day. 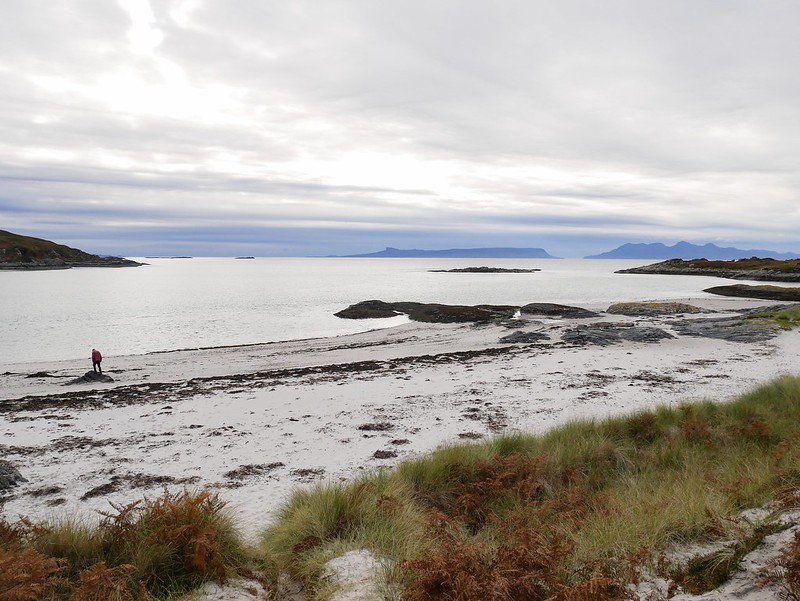 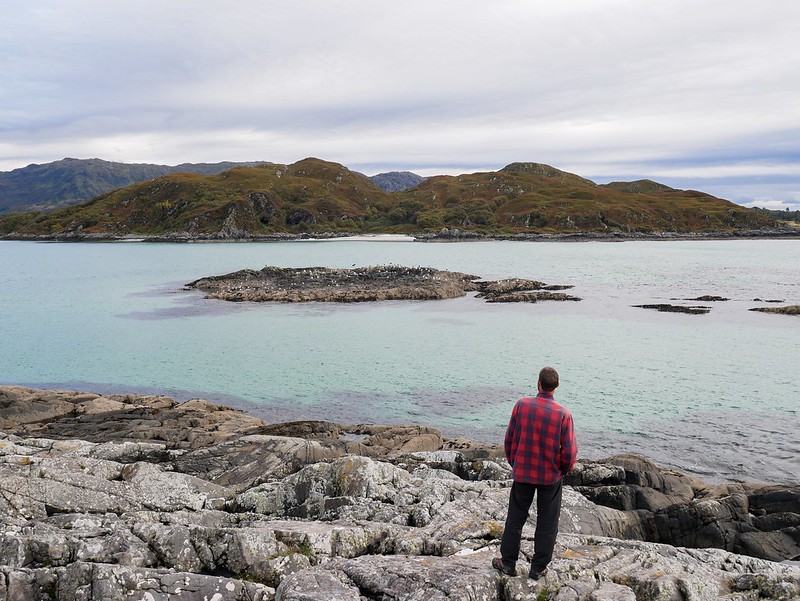 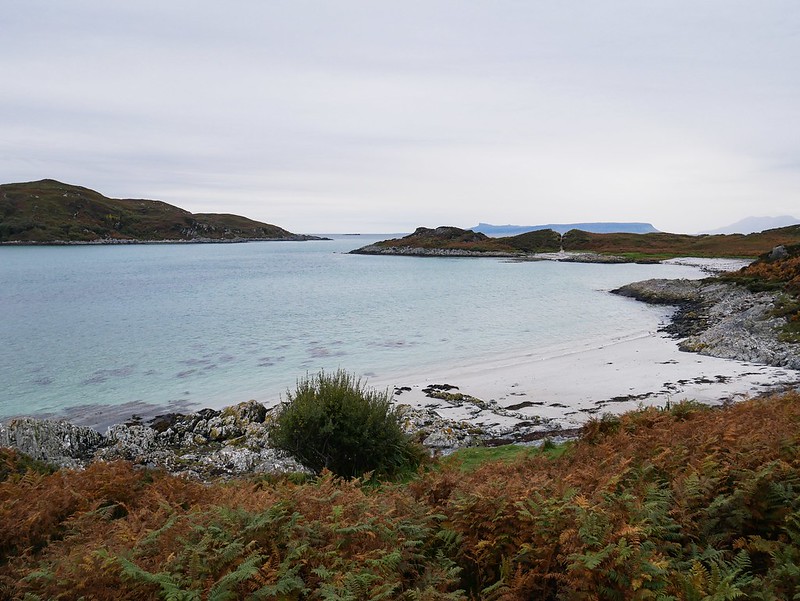 We started off with a familiar walk along Camusdarach Beach where we used to take the three lovely labradors who lived at the manor. We had a lot of fun walking the dogs but they weren’t the most obedient, Midge in particular was a selective listener, she was an old girl and played up to it, acting deaf to get away with things, yet she’d hear a crumb land on the floor from across the room. One day Midge wandered off and I realised she was eating something that smelt and looked disgusting. I thought it was a washed up nappy and I had to drag her away but we later realised it was a washed up whale that was rather decomposed. As soon as we told our host about our discovery Craig was sent out with the gardener and a chainsaw to cut off a couple of the vertebrae’s to use as stools in the future. They came back with the flesh covered bones in the back of a trailer and Craig said it was the worst smell he’s ever experienced. I walked over for a closer look and thought it wasn’t too bad, until the wind changed direction and my god it hit me like a brick wall.

We continued beyond Camusdarach, along the scenic coast road that passes dozens of idyllic white sand beaches. I can only imagine how dreamy this place must look in summer, it really would be like the Caribbean but today it was cloudy and grey, just like when we used to lived here. 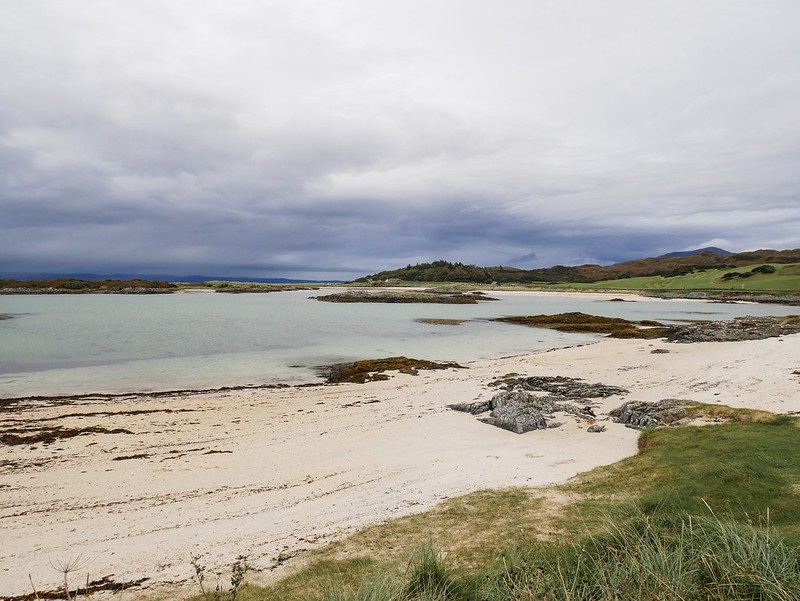 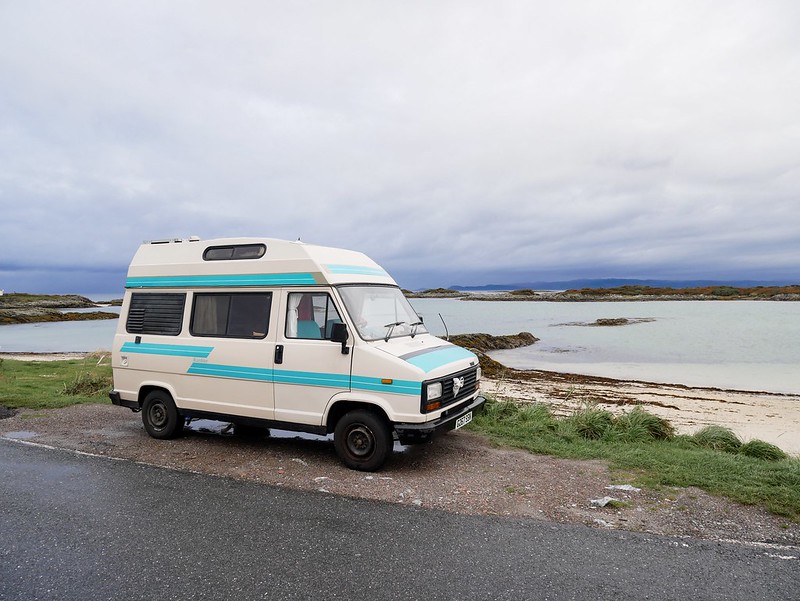 The next morning we did a walk around the grounds of the Manor House. It was a public footpath so we weren’t trespassing and it was a regular circuit we’d take the dogs on. We arrived at the pebbly beach and behind us, propped up on a hill with a rugged mountain backdrop was the grand house. The fields leading up to the property were filled with sheep, Midge had also enjoyed feasting on a decomposing sheep here too. We looked up at the house, amazed at how many windows there were and I remembered how one of our jobs was to sand down all of the window frames and repaint them. Boy did that take a long time. We remembered the time when the two gigantic pigs, Queenie and the Empress, escaped and we had to entice them back to their enclosure with treats. Occasional we’d be left to house sit and look after the dogs and the house felt so spooky when it was empty. We lived in a little cottage on the grounds but sometimes Craig would go into the manor and play snooker. All of the lights would be out and he told me how creepy it was flicking the light on and seeing up the long hallways. We finished our loop walk and headed back to Helga, but we’d seen a lot of deer poo by the coast so we decided to head back that evening and try and see some stags at dusk. 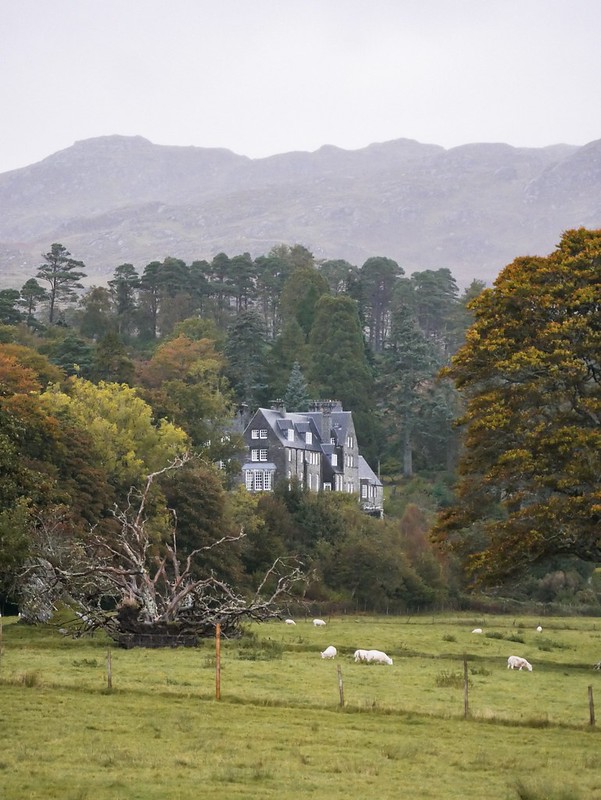 We ended up walking a different route and wound our way back through the property. I wasn’t sure if this route was a public right of way or private so we didn’t spend long walking through. We did manage to spot a few deer and we also passed through the forest where we’d been gardening once and a lightning strike had landed just a meter away from me. There were a few cars parked up and there seemed to be some sort of party going on so we headed back rather quickly, not really wanting to bump into anyone we knew.

That evening we headed to the local pub where a music session was happening, we only went to a couple of sessions when we lived here but we had fond memories of listening to the locals playing traditional songs with fiddles, flutes and bagpipes. Sadly our meal was terrible but I didn’t complain as we were having a lovely evening chatting to some locals and listening to the musicians.

We left the area the next morning, stopping for a swim in a Loch which was much warmer than when we did the traditional New Year’s Day swim and the water was 0°. The ‘Harry Potter’ steam train chugged past us on the opposite side of the Loch during our dip, steam billowing out of the old locomotive. Further up the road was the Glenfinnan Viaduct, a sight that has become very popular in recent years. When we visited in 2014 we were the only people there, now there was a huge paid carpark for it. We just did a quick stroll for the classic view of the viaduct and then headed back to Helga and finally to the big smoke…aka Fort William. Ok, not a big city at all but considering we’ve been in the highlands for about a month we haven’t seen a big town in ages. 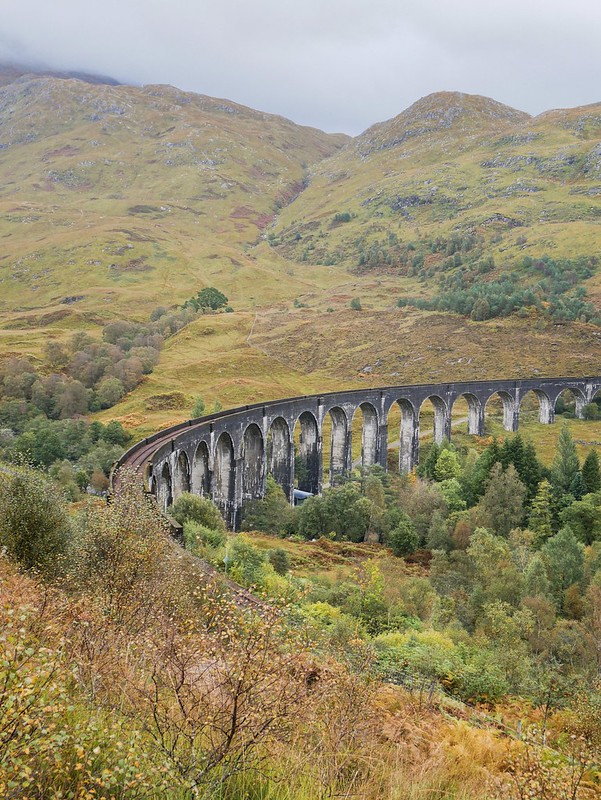