I’m not a huge fan of caves, I find them extremely creepy and I’m scared of darkness. But, here we were, driving to a cave on the coast of Skye which can only be accessed at low tide. It was a very scenic drive down to the tiny coastal village of Elgol and clouds were rolling over the hill tops. There were just a few parking spaces and we were the first people to arrive but more turned up as we set off in the rain. A little track led us through a field of ferns and down a muddy track to a rocky inlet. We jumped across the rocks and made our way around the edge of the coast to the next inlet. Craig said we’d be fine accessing the cave a few hours either side of low tide but I was sceptical…and I was right to be so. This inlet didn’t have dry ground covered in rocks and seaweed like the last one, it was full of water. 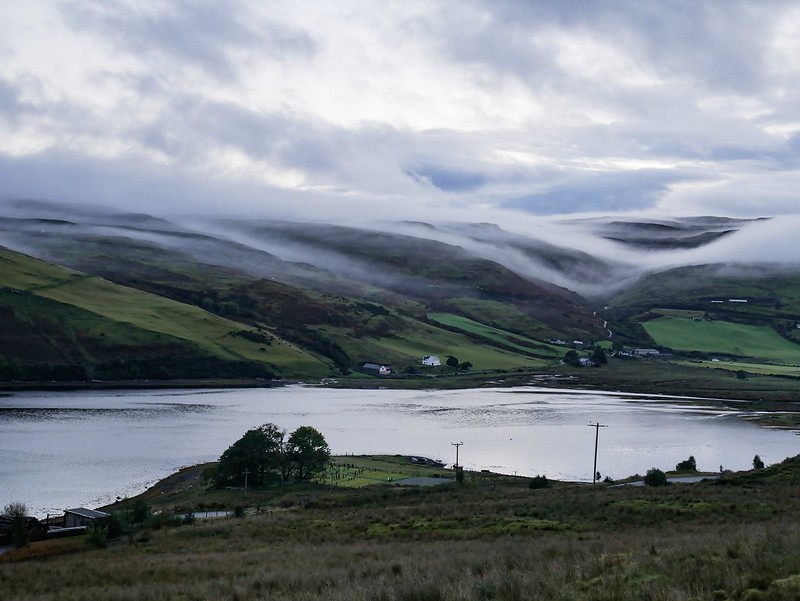 It was about 20 minutes before low tide so we were really surprised that it looked almost impassable but we figured we could manage it. The route was tricky though and involved us walking along an extremely narrow edge above the sea. We got to a point where the ledge we were traversing basically continued down into the water. The rock wall was too steep to climb so we had no choice but to take our shoes off and wade through. It was about 2-3ft deep but we managed to continue along the ledge underneath the water. It wasn’t easy at all as we were carefully trying to hold onto the rocky wall with our hands and shuffle our feet into the unknown. At one point I nearly lost my grip and fell backwards which made me rather giddy as I had my camera round my neck. Anyway, it didn’t take long but the nerve wracking part was over…although I couldn’t quite relax as I knew we had to come back the exact same way.

Just before we reached the cave we had to step over a crumbling wall which was built in the 19th century to prevent people entering without a guide. For some reason a passing gunboat shot a hole through the wall and it’s been free to visit ever since. There were two caves but the one we were exploring was on the left. We popped our head torches on and wearily stepped inside. The walls and ceiling were dark and eerie and the floor was wet and muddy. After about 20 meters the cave turned right and ahead of us was a bizarre sight. It was like a tunnel, the walls a greyish-white colour and the ground was a steep natural stairway of pale brown rock. We couldn’t believe how steep it was though, it looked almost vertical but somehow we had to head up it. The cavern was made of flowstone, formed from calcium carbonate and it was surprisingly grippy which meant we had no problems climbing up. 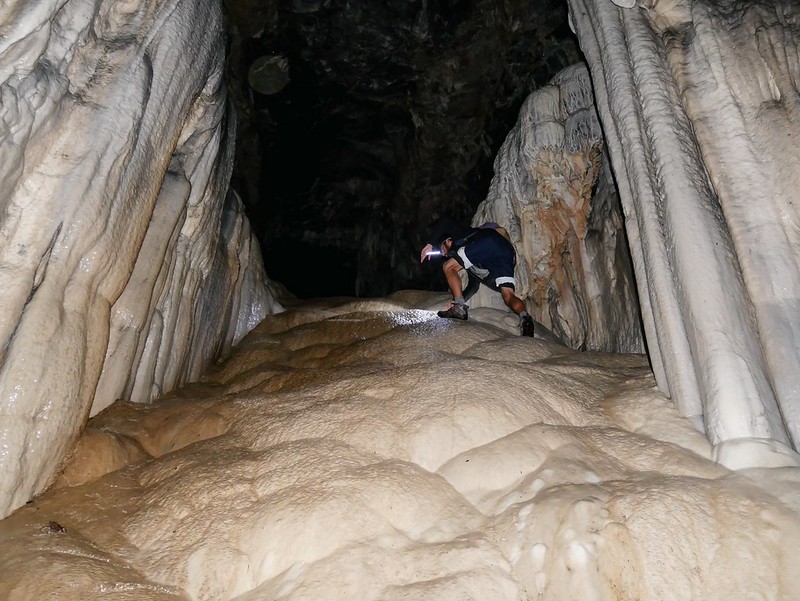 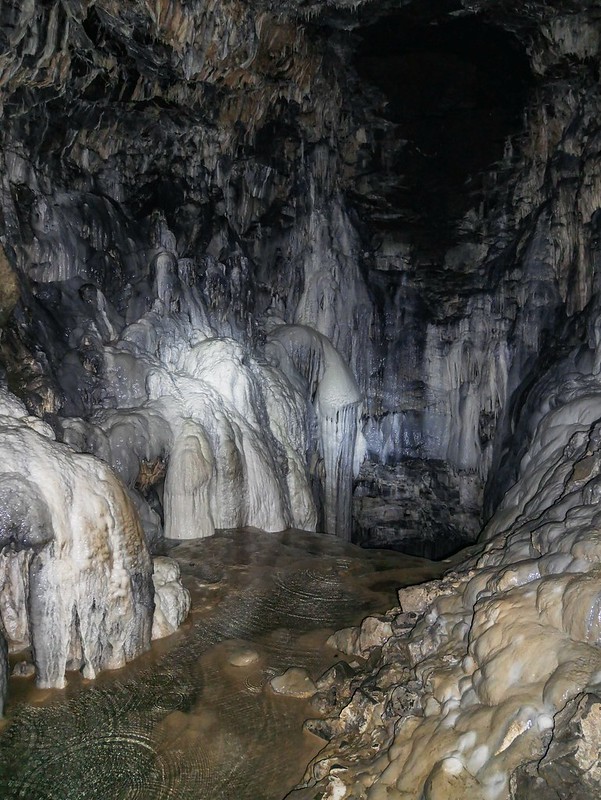 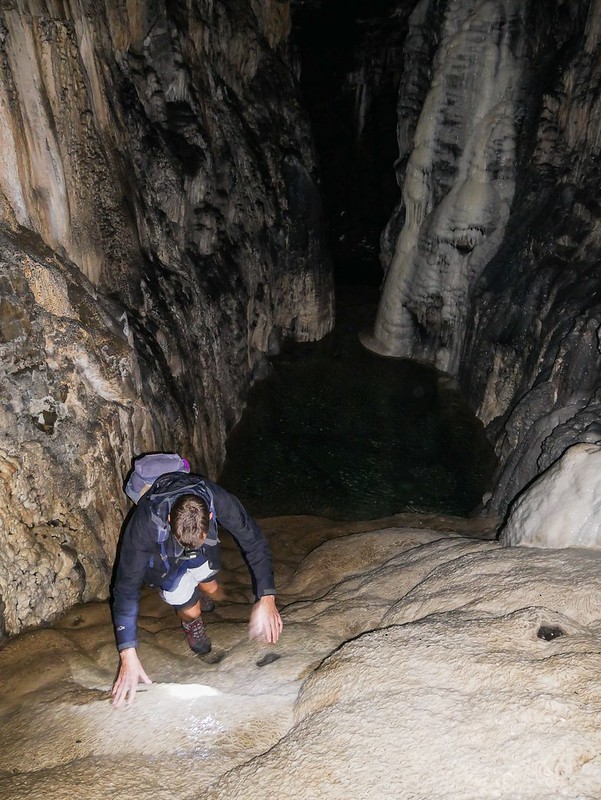 The steep section levelled out in a really impressive area with pure white stalactites that looked like wax melting down a candle. Sadly there used to be a lot more stalactites gracing the ceiling but the victorians stole many of them as souvenirs. It was white all around us now and the ground was covered in large crystal clear puddles. We continued exploring and the cave headed steeply back down, leading us to a deep pool. It was crystal clear and a gorgeous emerald colour when we shone our torches onto it. The cave narrowed to just a meter of so wide, with the pool continuing into the darkness but there was no chance I was getting in that water and seeing what was on the other side so we headed back. I was expecting to see a deformed, eyeless, human dashing through the darkness on all fours but luckily all we saw were a few frogs which was a relief. 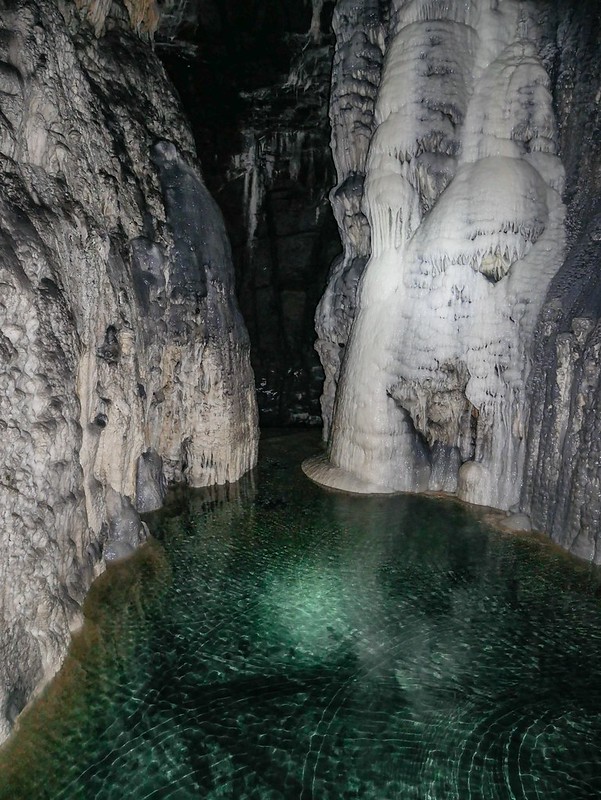 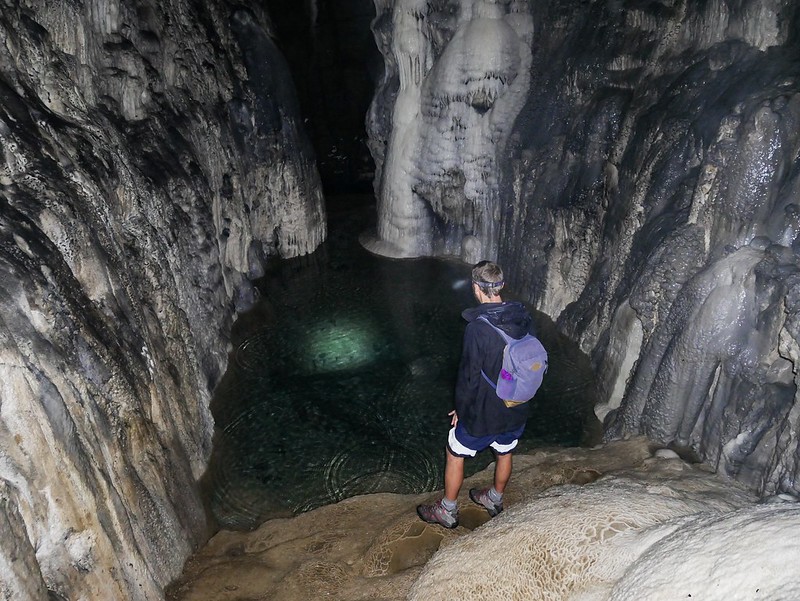 As we made our way back down the steep slope we could hear a couple coming into the cave. Craig decided it would be a brilliant idea to turn our torches off and stand in the pitch black to make the couple jump. I mean, it was kind of a funny idea but to be honest it was probably scarier for us, standing in the unknown darkness for ages as the couple took forever to reach us. In the end we awkwardly turned our torches on when they started coming up the slope and told them out terrible plan. The tide was slightly lower on the way back but still up to our knees. A group of 6 people were standing on the headland, watching us wade through and they seemed surprised to see the water so high and they actually decided against going to the cave. 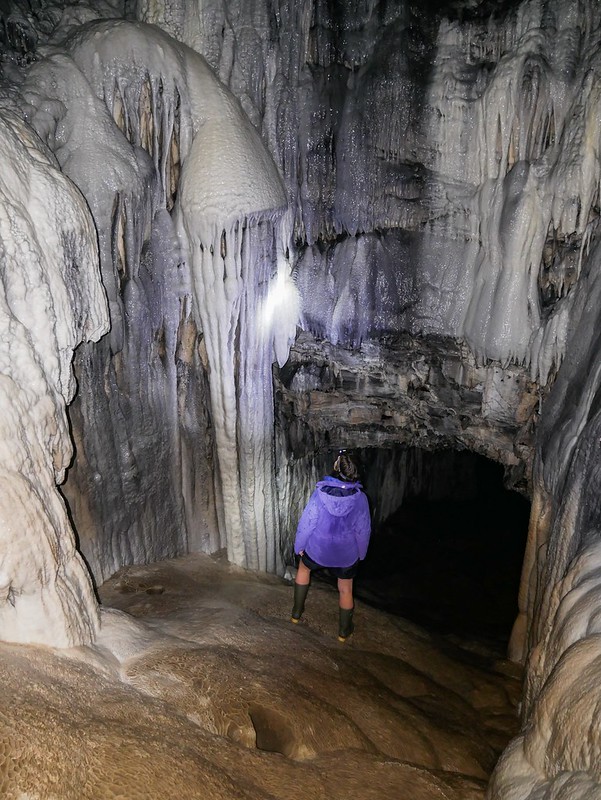 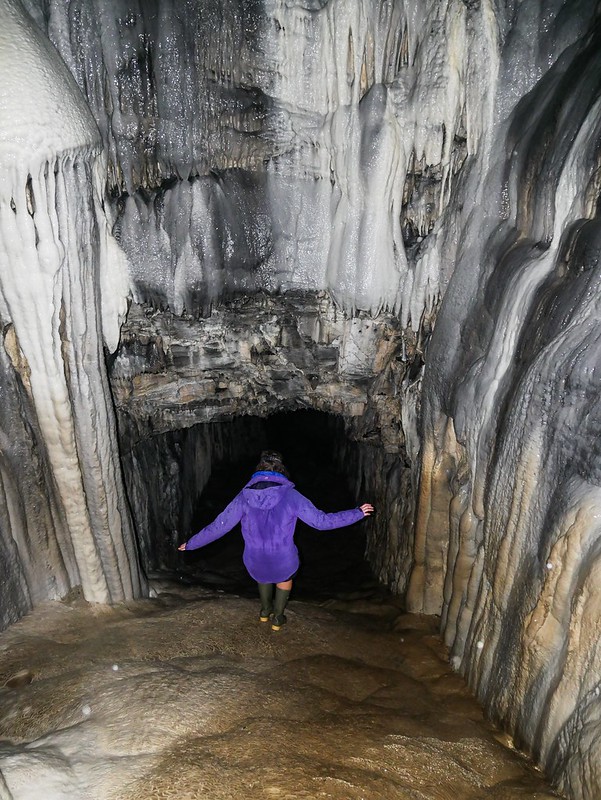 The following day we had a big plan to hike to Camasunary Beach and then up Sgurr na Astro, a fairly small mountain but supposedly with spectacular views. Well, we didn’t make it far at all, the trail was awful, an absolutely boggy mess that wasn’t fun to walk along at all. We arrived at the first pebbly beach to find it covered in washed up plastic debris from the fishing industry which was really disappointing. Then it chucked it down with rain at which point we made a mad dash for a cave to escape the worst of it. By this point we were rather fed up with the walk, it was taking so long on the muddy terrain that we realised it was too ambitious to get up the mountain so we just headed back, feeling rather defeated. 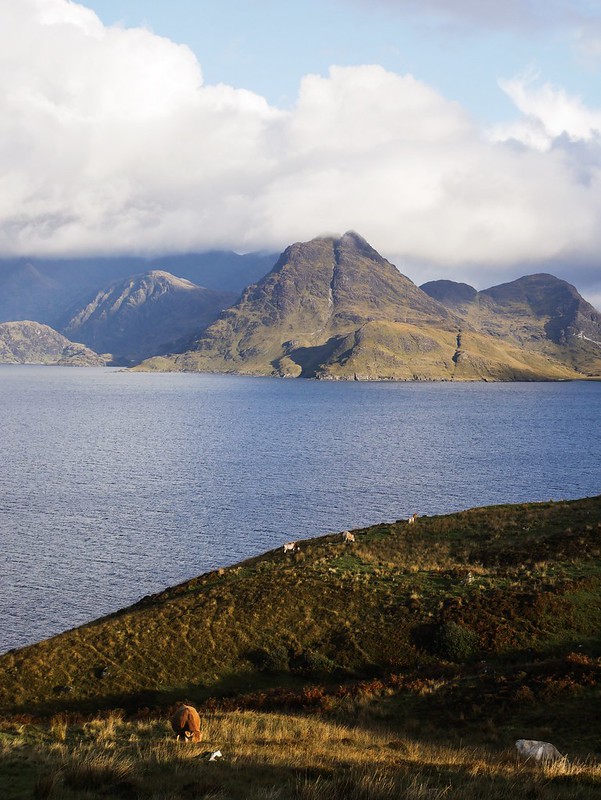 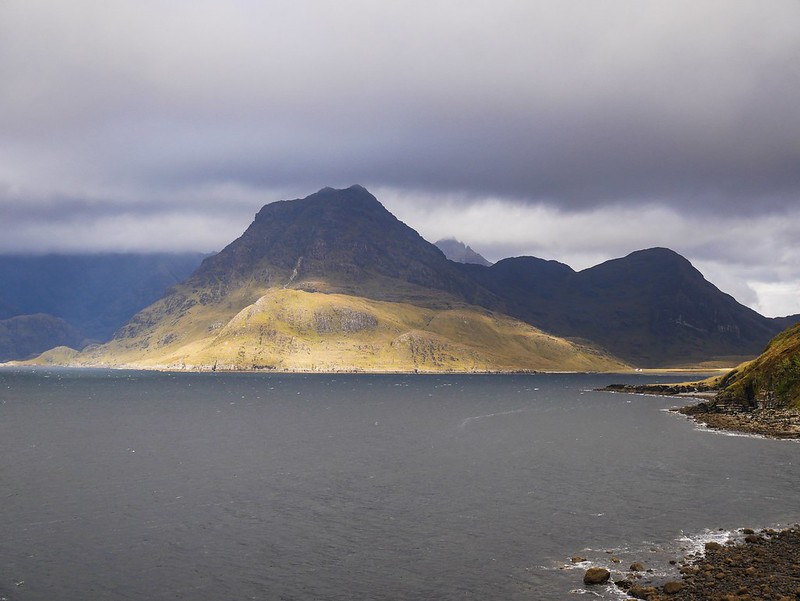 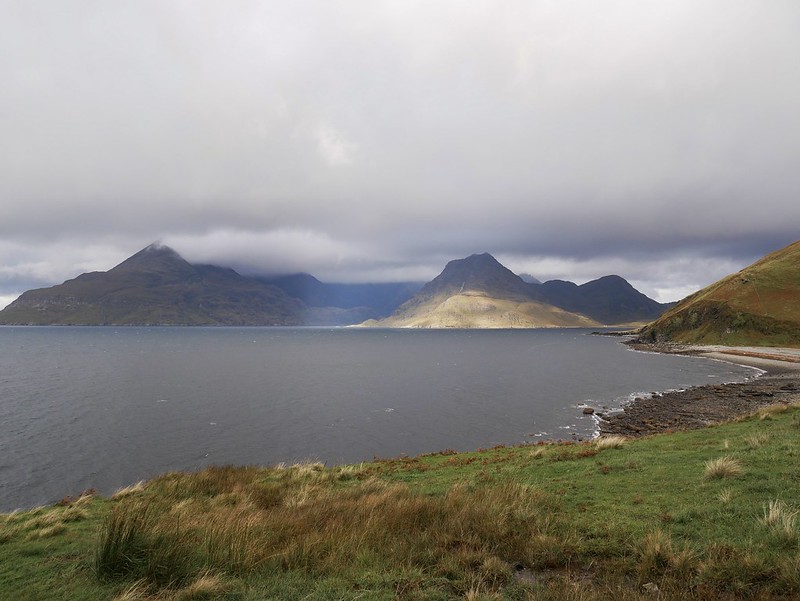 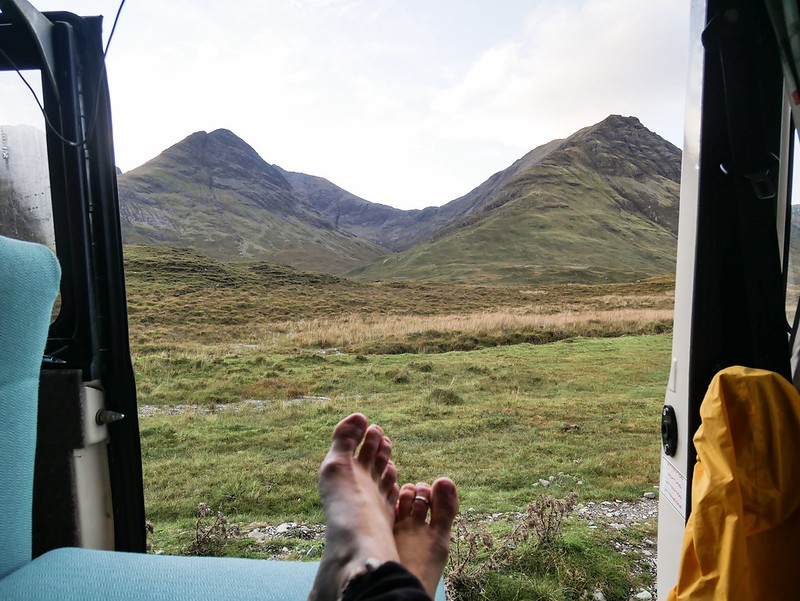 Finally we had some of the best weather forecasted for our two weeks on Skye so we had to do another mountain hike. We picked Bla Bheinn, also known as Blaven, it’s a pretty straightforward hike compared to the Black Cuillins but it offers superb views so up we went. We had blue skies and it was surprisingly warm but there was also the odd rainbow which meant it was raining somewhere. But for now, it was great weather and we headed up a well built trail alongside a gushing river with pretty waterfalls. 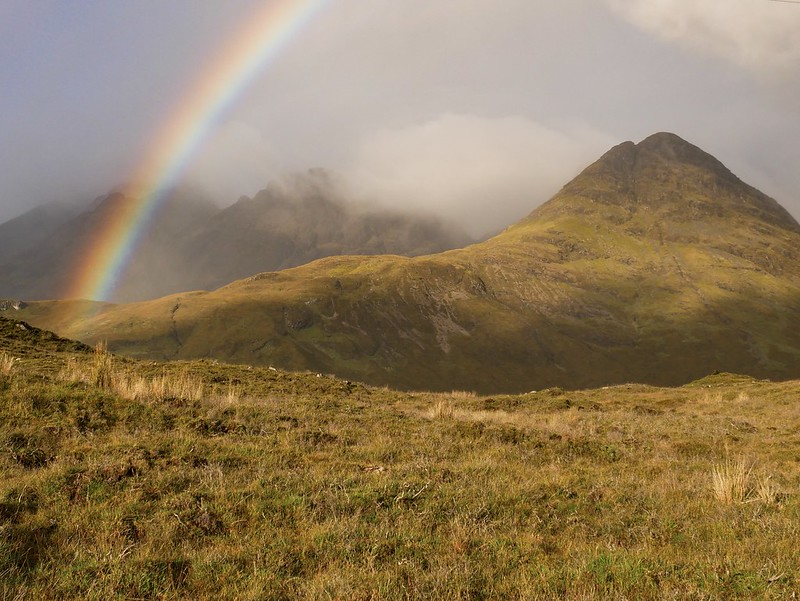 Cloud began to hug the mountain tops and soon enough we were walking through the fog. It was a bit of a rocky scramble uphill but nothing too challenging. As expected, the summit was a cloudy mess but we decided we had to just stay up there and wait for it to clear, which it had to do as the forecast was so good for today. Well, we had our lunch and we ran around in circles to keep warm but things just seemed to get worse up there. The wind picked up and it began raining, brilliant. Occasionally it seemed like the clouds were all about to lift, we could see the sun and the view started revealing itself, but then it would instantly vanish. We were up on the summit for almost two hours before we finally gave up, drenched and freezing cold, we made our way down but this time via a different route. The wind was even stronger now and the sleet was painfully hitting our faces. I couldn’t believe what a shit-show of a hike it was. 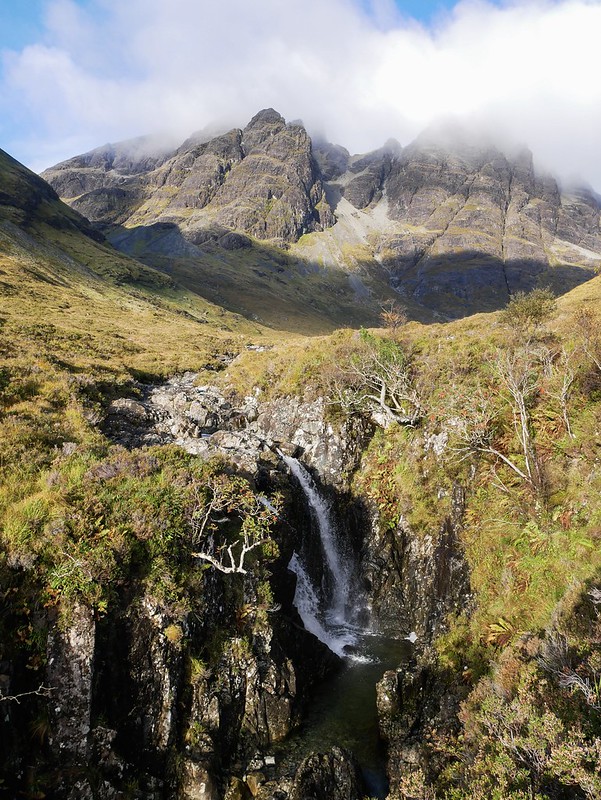 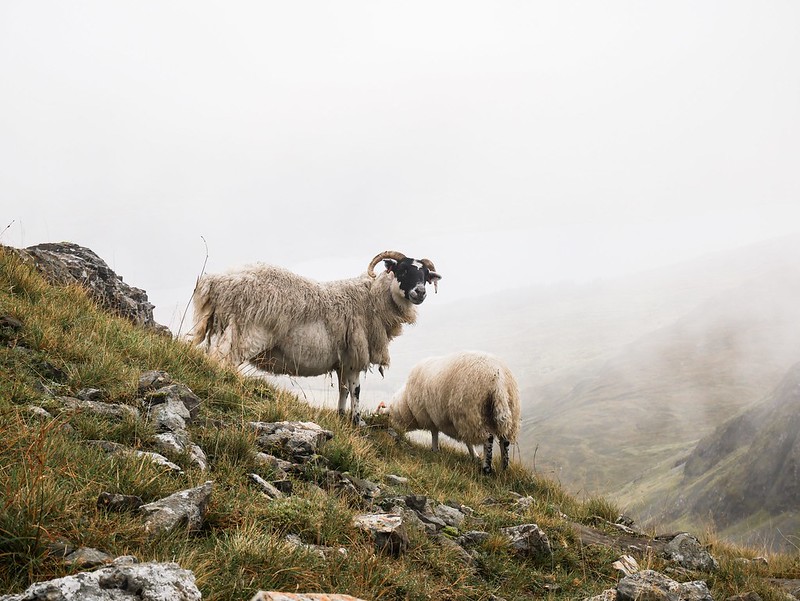 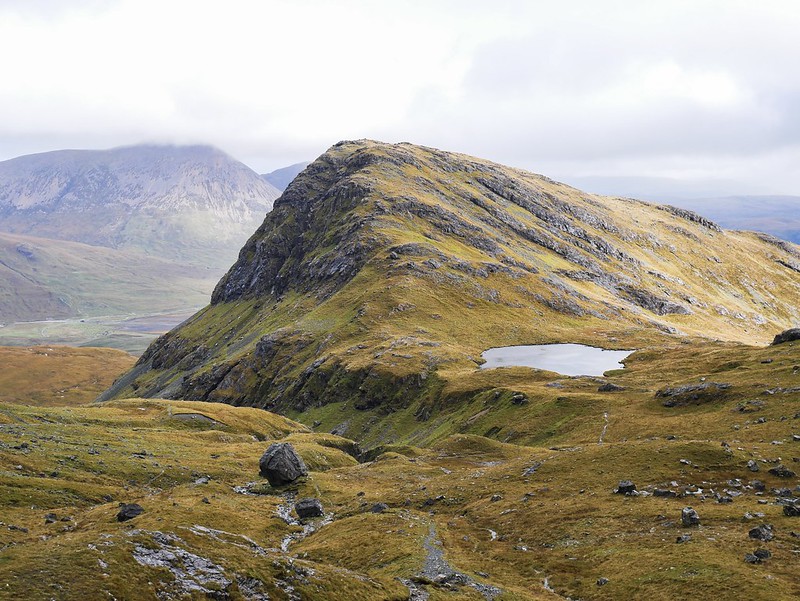 The next morning we woke to blue skies and clear mountain tops and I was so angry I didn’t even take a single photo on our drive as we left the area. After two rather rainy weeks on Skye it was time for us to head back to the mainland and continue our journey. 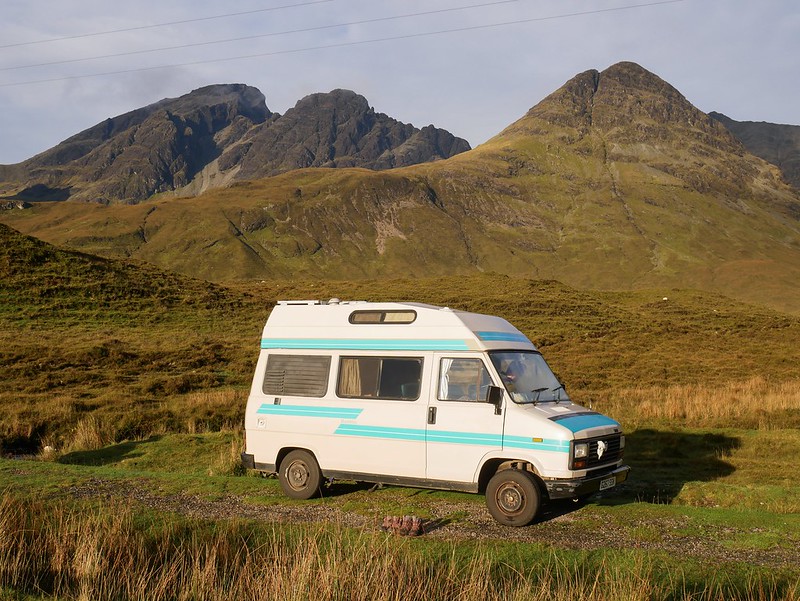