The Black Cuillin’s are up there with the most beautiful and challenging mountains to hike in Scotland. They look like proper mountains, almost menacing and they live up to their ‘black’ name due to them being the eroded remains of a magma chamber from a huge volcano. They’re mainly made up of black gabbro rock which is extremely grippy but also capable of wearing down hiking boots and clothes a lot quicker than the average rock. 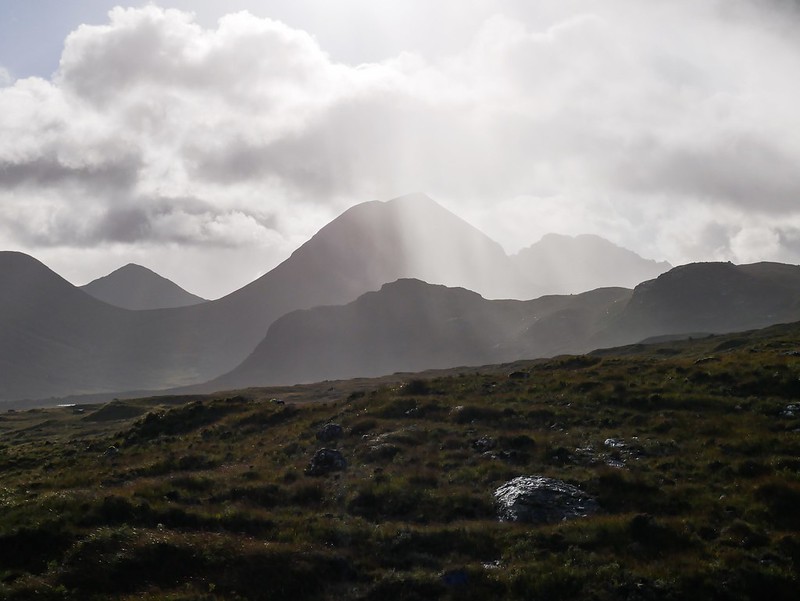 After days of starring up at these peaks we finally had a good weather window to tackle a hike. We chose to head up Bruach Na Frithe, at 958m it’s considered one of the easiest Black Cuillins to hike as it doesn’t involve any scrambling. The route however isn’t always obvious and there’s a lot of rough, rocky terrain so it’s not exactly a walk in the park. We set off nice and early under blue skies but it quickly clouded over and a few showers passed us. It was a really pretty route, the mountains in this area just seem to rise straight out of the valley floor, some perfectly shaped like pyramids. The area we were heading looked rather menacing with spiky, black summits. 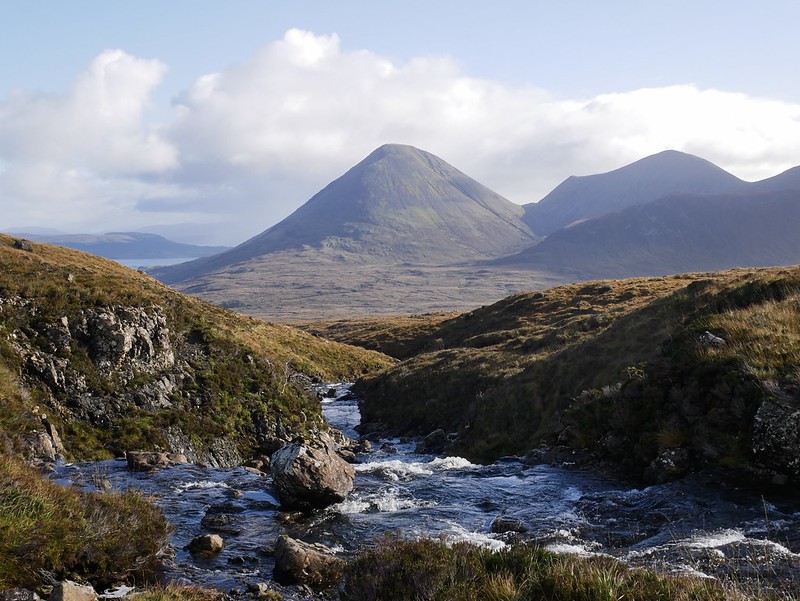 The path soon stopped and we had to keep an eye out for cairns to give us an idea of which direction to go through the rocky moonscape. We were now walking in a thick cloud, occasionally it would clear a little and we’d see rainbows appearing through the valley behind us. A couple of people came down from the mountain and said they didn’t have any views so I was starting to lose any optimism that it might clear up. Eventually we arrived on the ridge with the giant rocky mass that’s called ‘the executioner’ standing above us. It’s a route for rock climbers only and through the fog we could see a couple of tiny people standing atop it. The wind was blowing wildly and we had to be careful walking along the ridge so we waited under a rock, hoping the cloud would clear. It was quite fascinating watching the clouds swirl between us and the other peaks, looking almost like smoke. We were treated to a view for a few moments which was very exciting and then we continued up to the main summit. 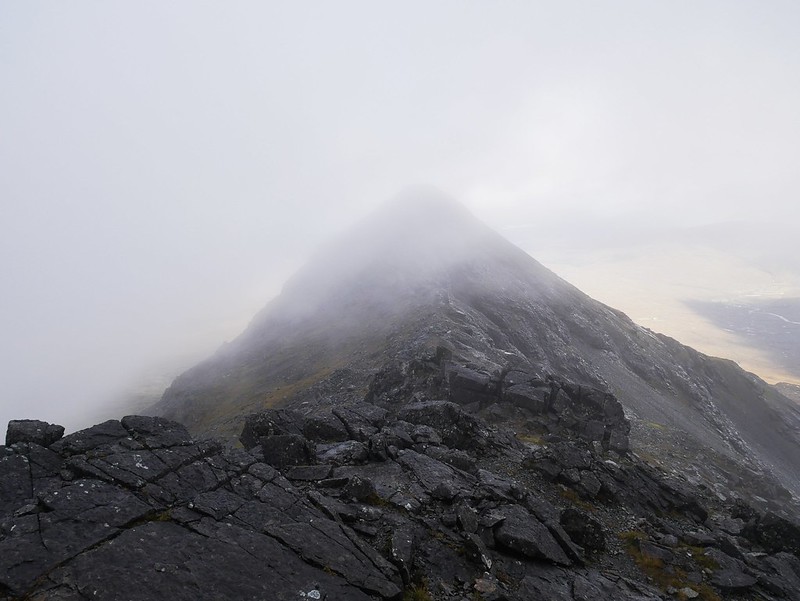 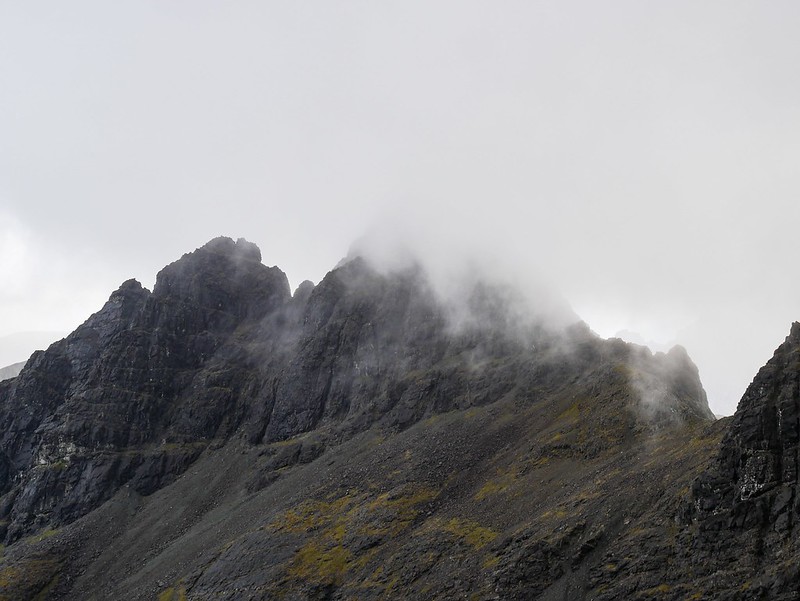 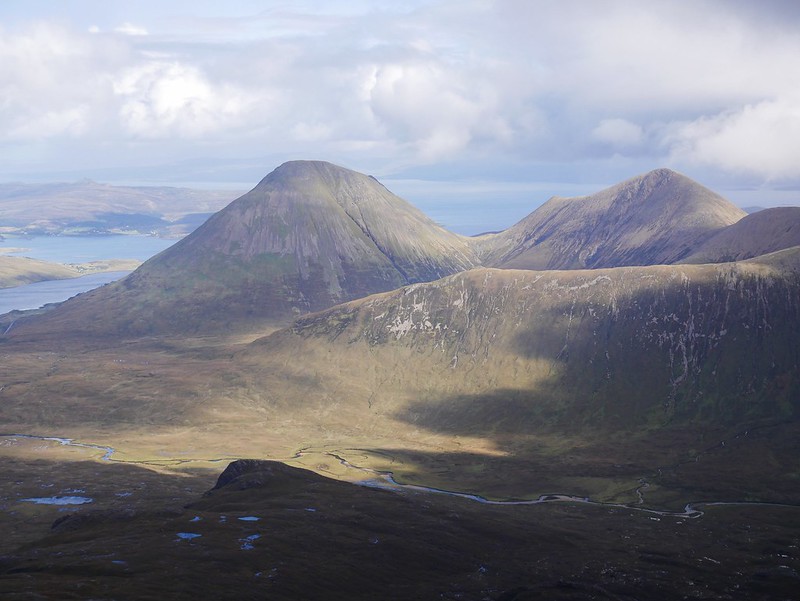 The view across this side was much wilder, we were standing on a summit in the middle of the Black Cuillin ridge which is roughly 11km long with 27 summits along it. Clouds were drifting past us while sun beams pierced through rain clouds so we had quite a dramatic view of the spiky peaks surrounding us. 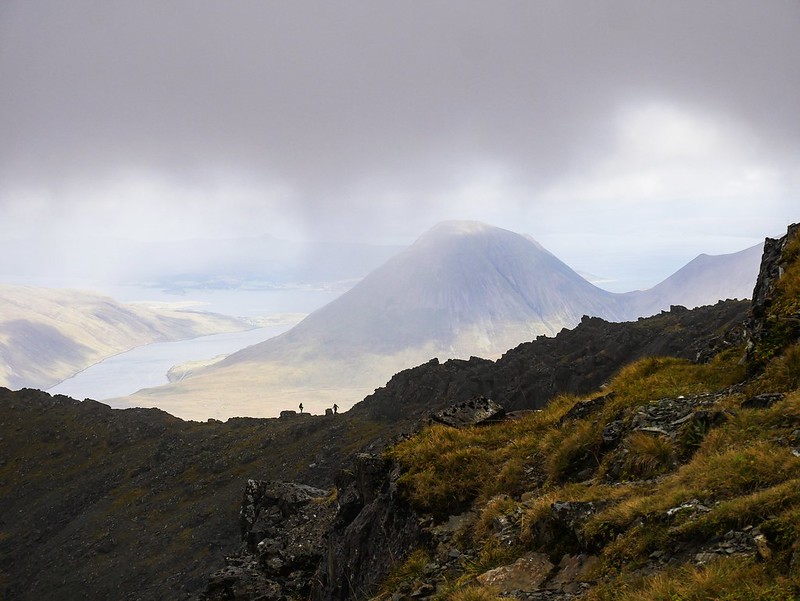 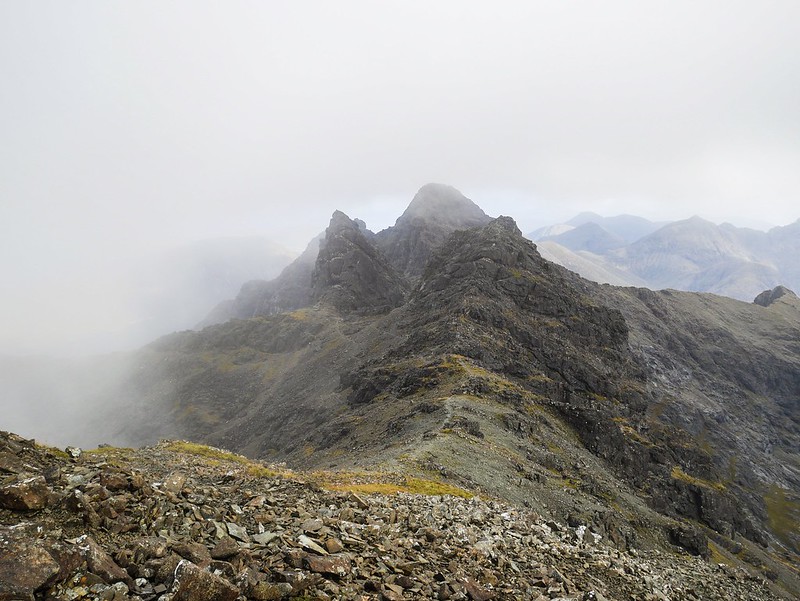 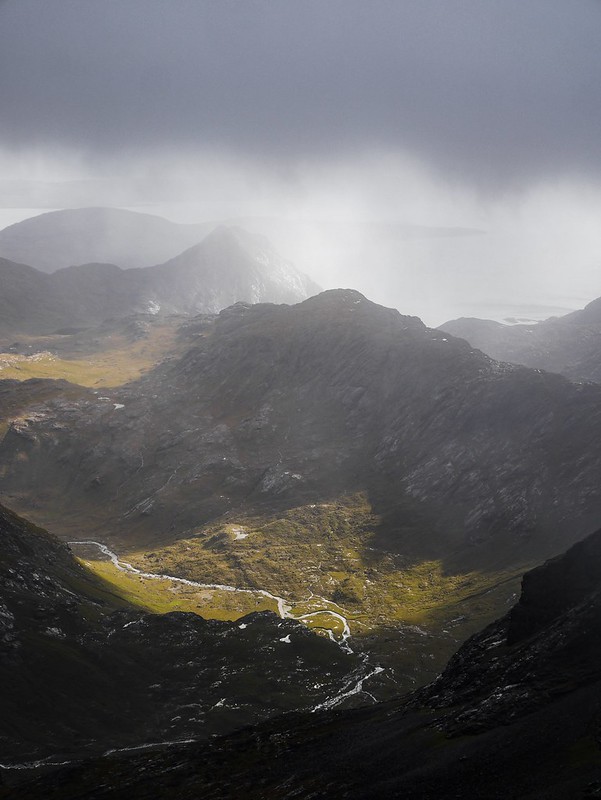 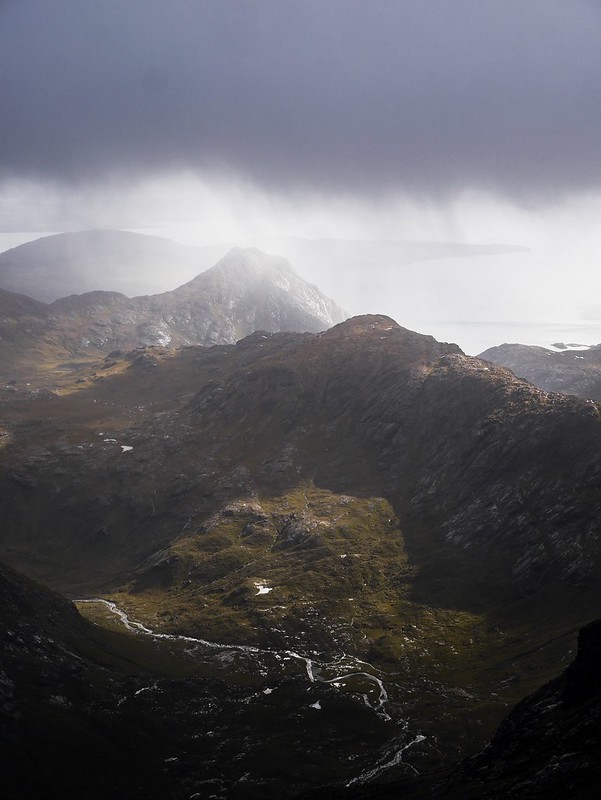 We did a loop hike back down by taking a narrow, grassy ridge into the valley. To our left were the charcoal coloured mountains and below us were the popular fairy pools. It’s amazing how busy a sight like that can be yet we only saw 10 people all day on this hike. The weather got better and better the more we descended and we even had a quick dip in a crystal clear pool beneath a waterfall. By the time we got back to Helga the sky was clear and the view of the mountains around Glen Sligachan was phenomenal. 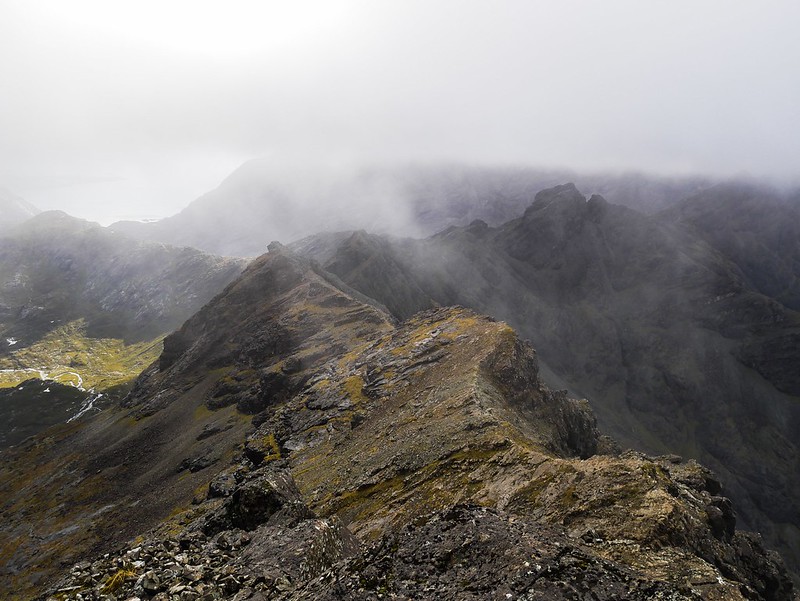 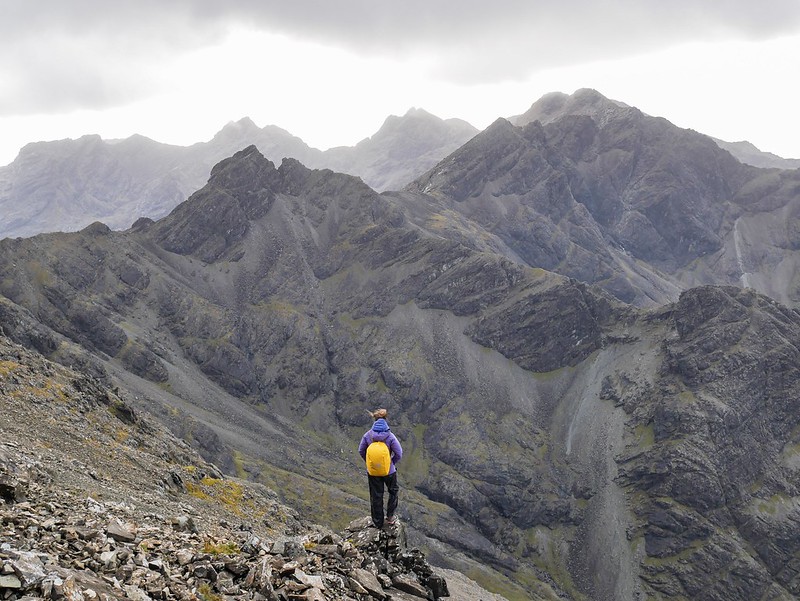 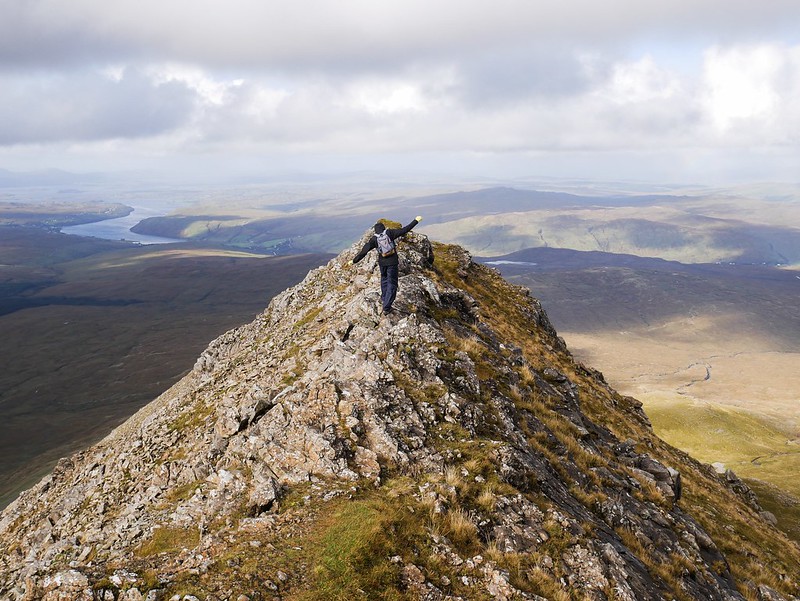 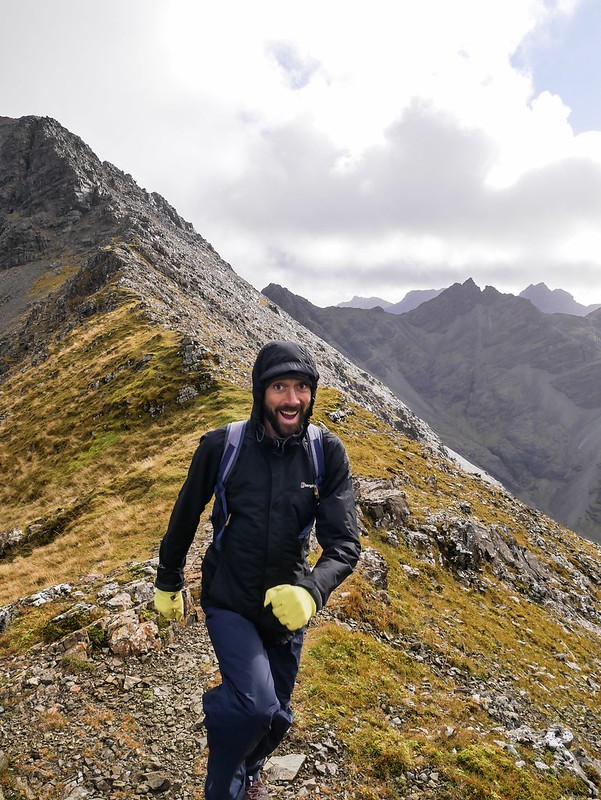 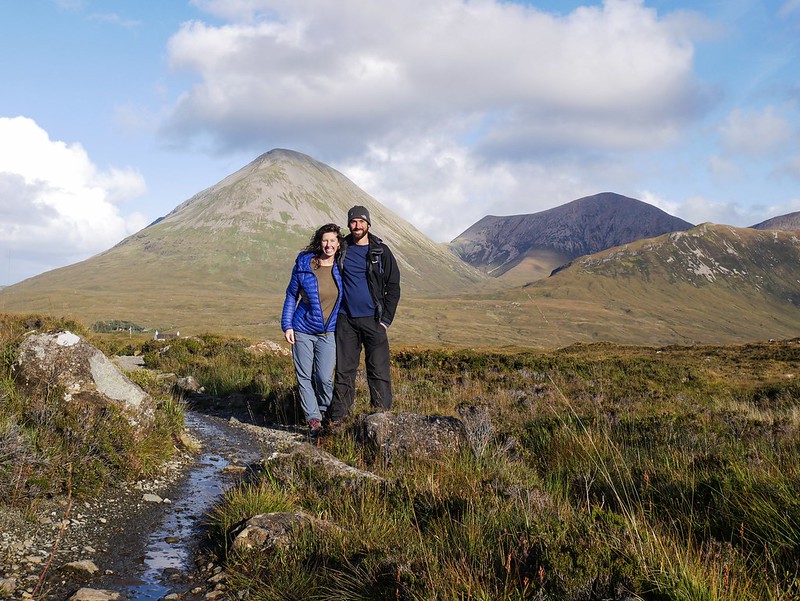 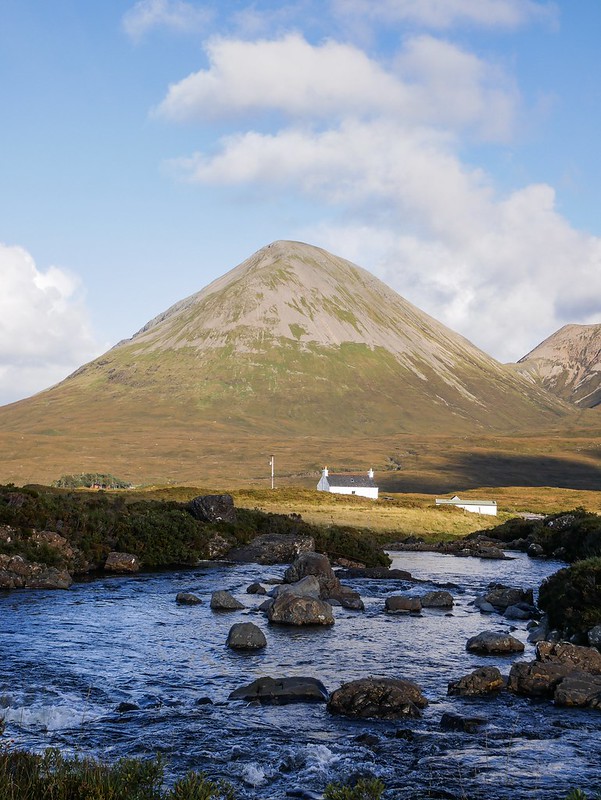 The next day we attempted another hike, this time to Sgùrr Alasdair, which at 992m is the highest point on the Isle of Skye. The forecast was poor with an 80% chance of rain but we were fed up with sitting around and waiting so we decided to chance it. We followed a good trail up to a sort of amphitheater with Lochan Coire Lagan surrounded by giant peaks. The loch almost looked spring fed with a beautiful patch of aqua blue water in the middle. The mountain tops were still heavily enshrouded in cloud so it wasn’t looking worthwhile hiking up there but heck, we decided to give it a go. 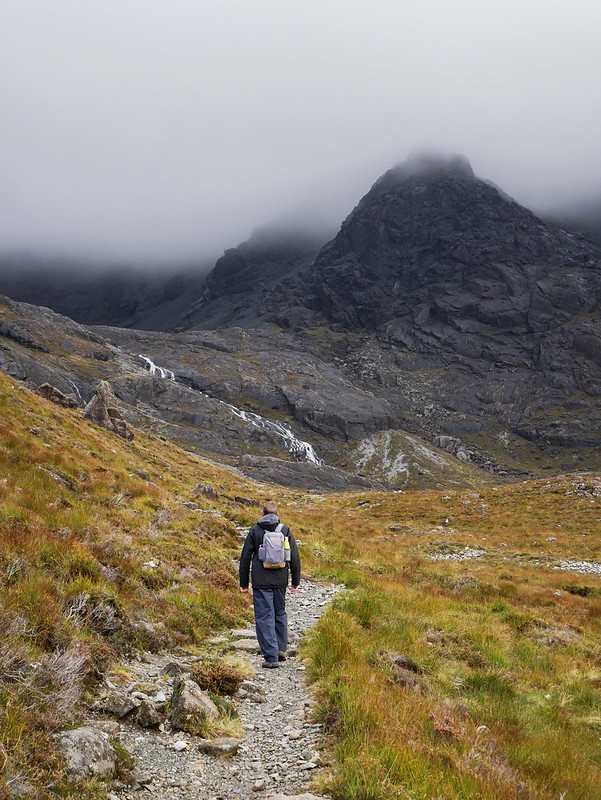 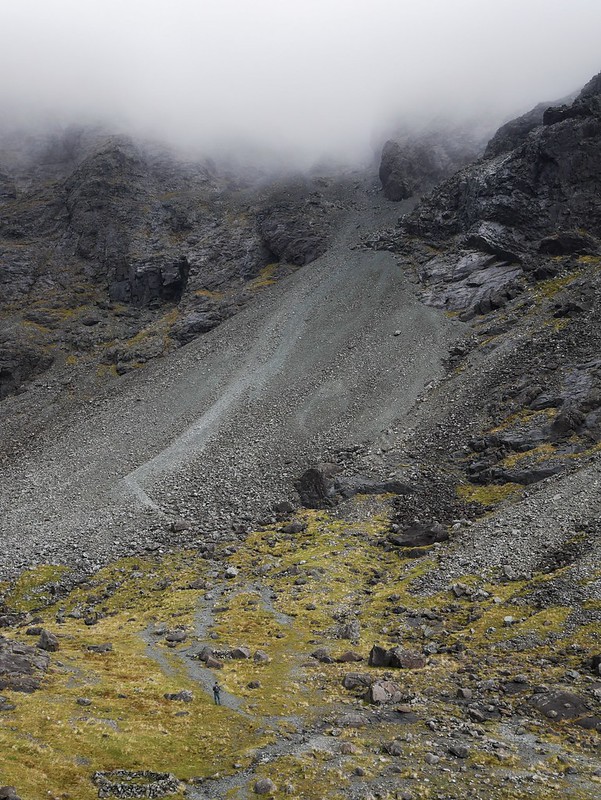 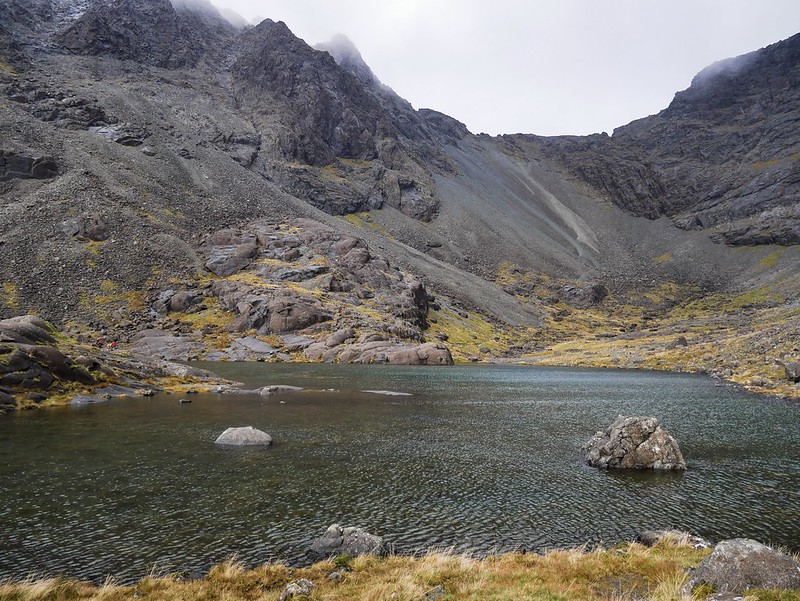 The route up was an interesting one, it was up an extremely steep scoria slope. So steep that it felt almost vertical at times and the scoria made it a demoralising task as we were just slipping down on every step, like trying to walk the wrong way on a travelator. It was only 800m to reach the summit but we had almost 400m elevation to climb up on the evil scoria slope. It was pretty dangerous as the rocks were all loose and kept rolling down the mountain so we both walked parallel to one another so we weren’t hit by any rocks. We were very grateful that the forecast was so bad because it meant we were the only fools on the mountain, I can’t imagine this route in summer with rocks constantly plummeting down the slope towards you. We were soon well and truly in the cloud and finding the route extremely exhausting. On my map it was labelled the ‘Great Stone Chute’ but we quickly renamed it ‘The Shit Chute’. It lived up to its names in more ways than one when Craig almost stepped in human shit. I’m really starting to lose any faith I have in humans, who the fuck shits in the middle of a rocky track. Why not go to the edge and bury it under a pile of rocks if you’re really that desperate. Geez. 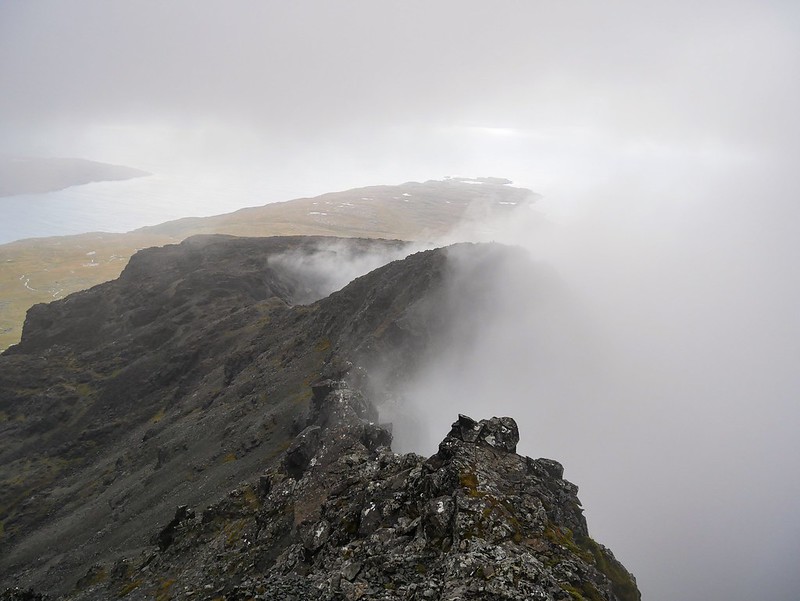 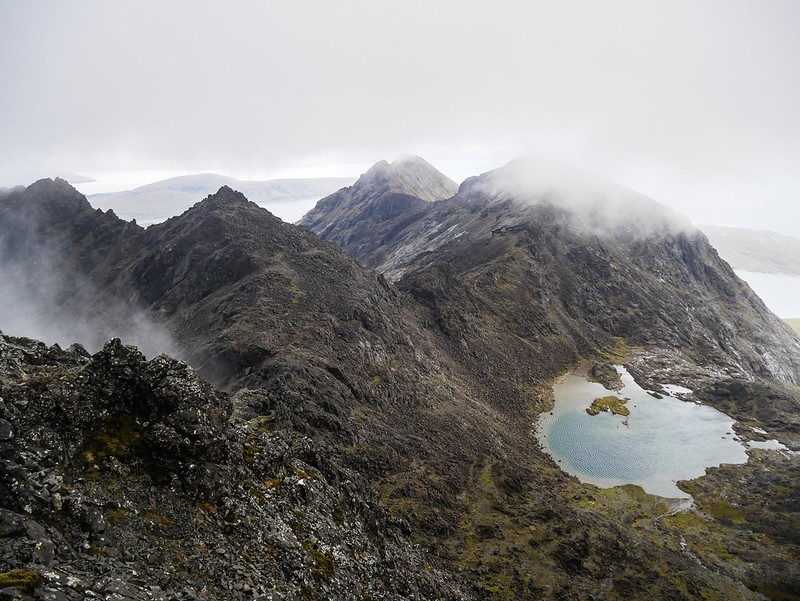 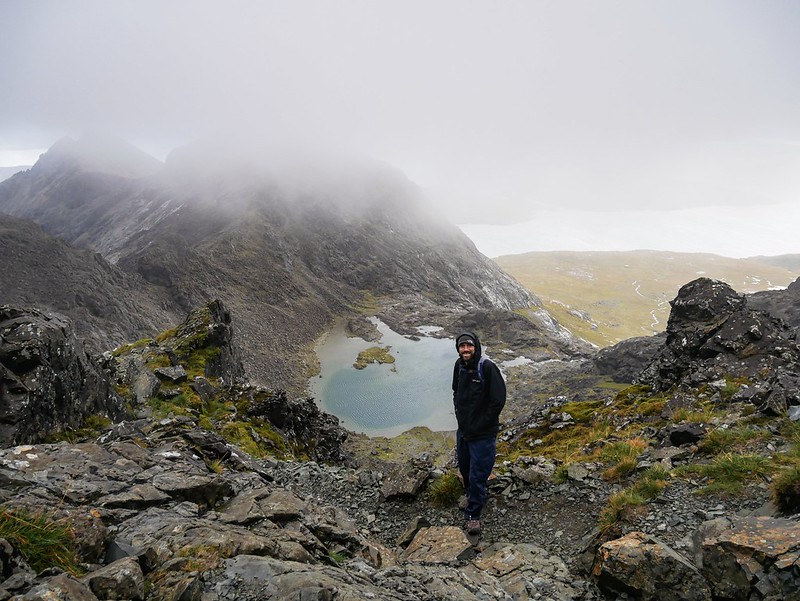 Anyway, we made it up to a pass and then continued up the final section to the summit. It was a bit of a scramble with a rather horrible ledge to navigate which had a drop off 20 meters down to that damn stone chute we’d just walked up. It was windy, cold and cloudy at the summit so we just sat behind a rock and had our lunch quickly. Suddenly I noticed the clouds part a little and in less that a minute we could see all of our surroundings. Wowee! It was an incredible view of the jagged black peaks all around us and a beautiful little Loch in a valley below. For those thirty minutes we spent on the top we were the highest people on the Isle of Skye, in fact the highest people on any British isle. The route down was a lot more enjoyable, we were able to let the scoria slide us down the mountain. Our feet acted as mini skis as we zig-zagged our way down in record time. Mission accomplished. 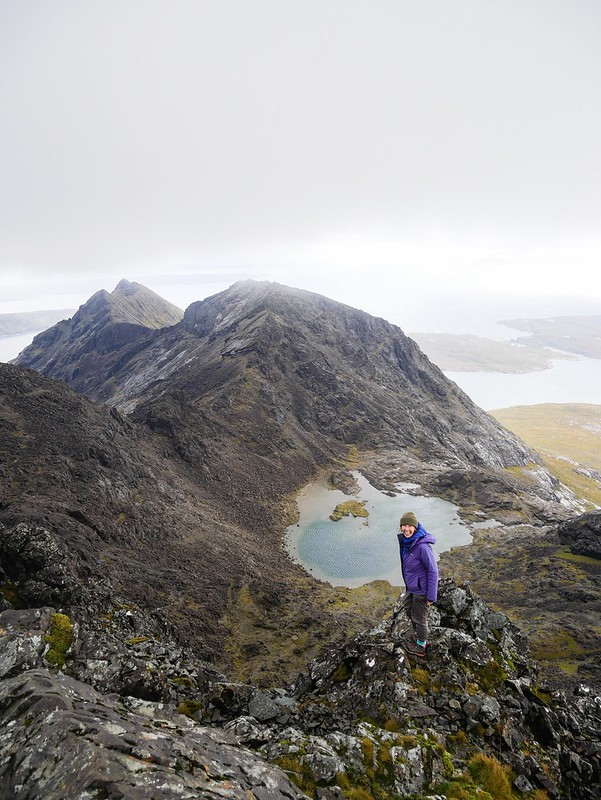 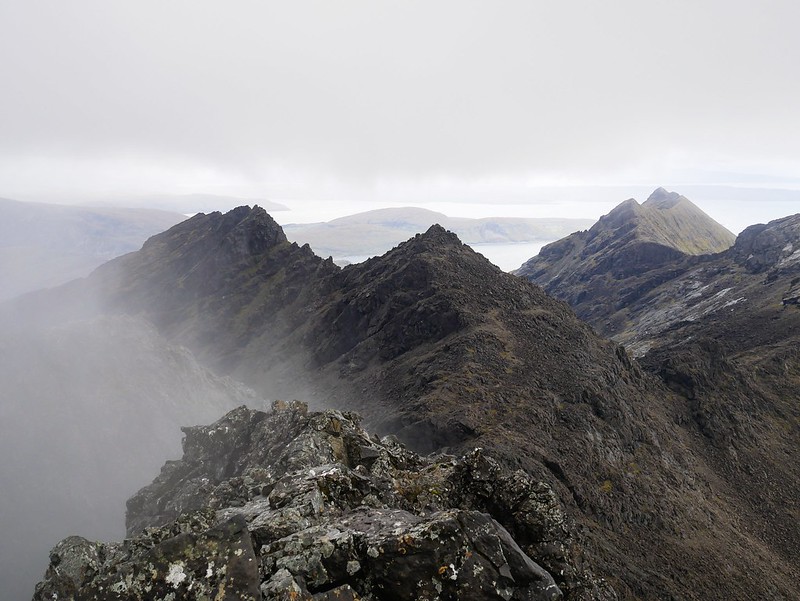 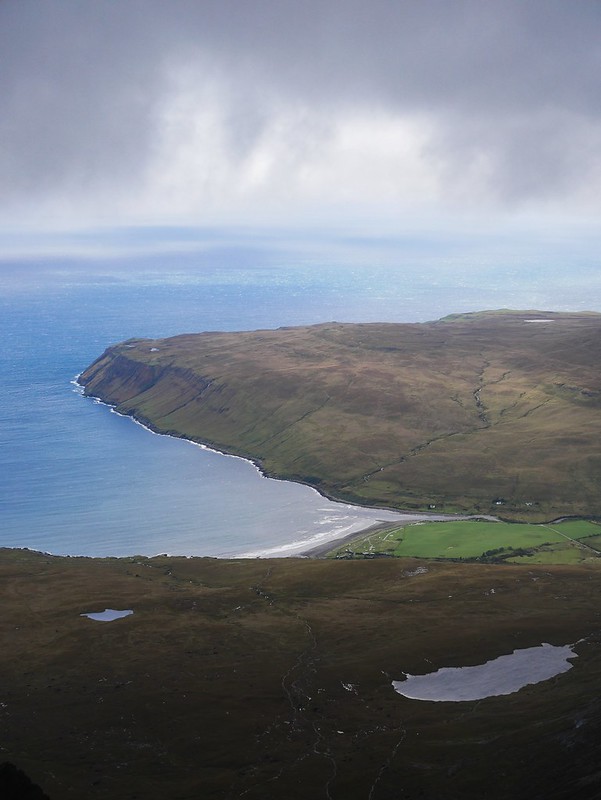 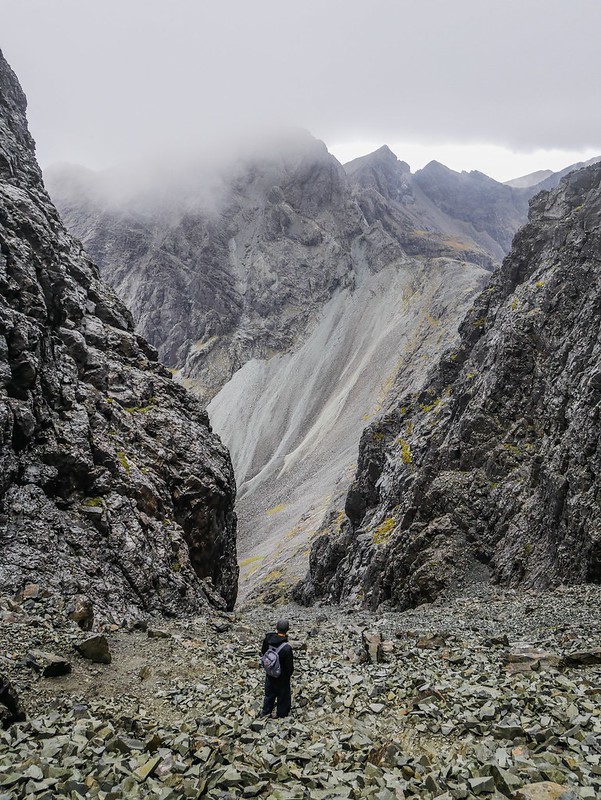 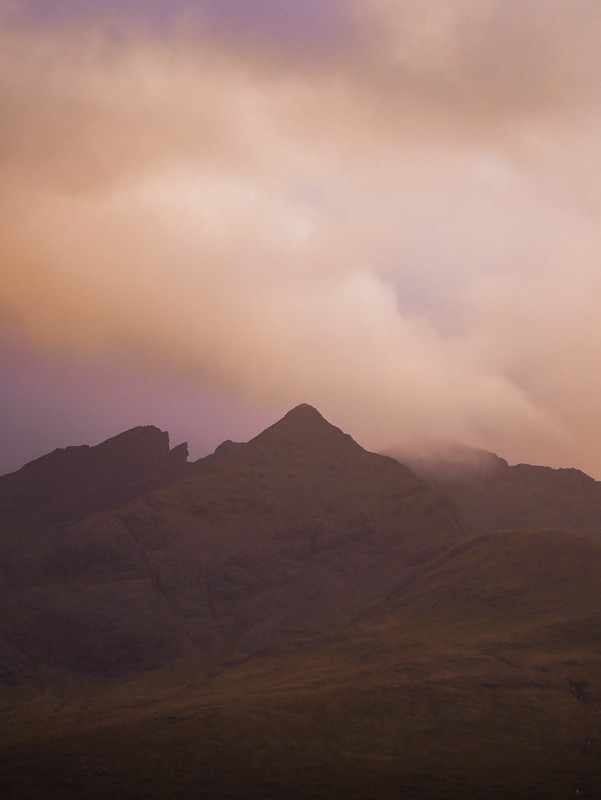