Most people visit Orkney for the history, but for us we were there for the nature, wildlife and also because it just made sense as it was on our ferry route back to the mainland from Shetland. We’d heard the orcas we’d witnessed on Shetland were around Orkney at the moment so we focused our time on trying to see them – as I mentioned in previous posts, we’re obsessed with them!

Our first day in Orkney we were totally engulfed in fog. Thick fog that lasted all day and we were also wiped out from the ferry journey, even though it wasn’t an overnight one and the sea was calm, we felt shattered so we took it easy for our first day. The next day we decided to explore the Mull Head Nature Reserve. The fog continued to taunt us as we set off on the trail. I must admit it was rather nice walking along a proper path, it was mowed grass and quite a contrast to the lumpy moorland we’d been hiking on in Shetland. The route took us past some interesting rock formations, cliffs and chasms. It was hard to appreciate the sights in such thick fog though but we did enjoy walking past vast areas of heather, covered in tiny purple flowers. We found a nice spot to camp beside a pebbly beach and after a little sunset stroll we got an early night. 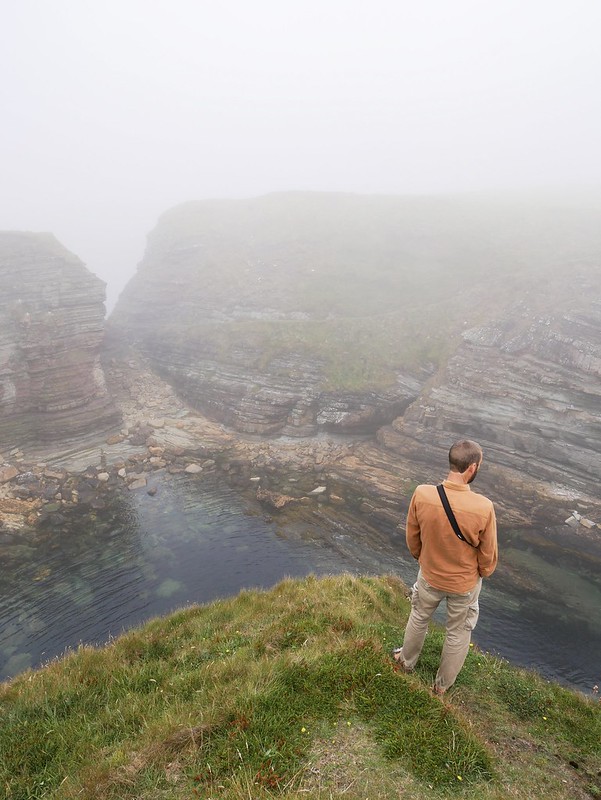 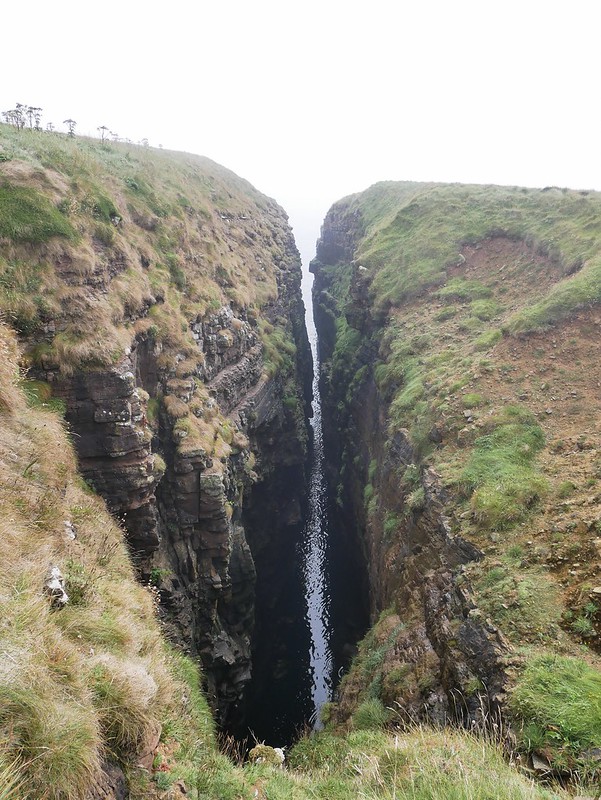 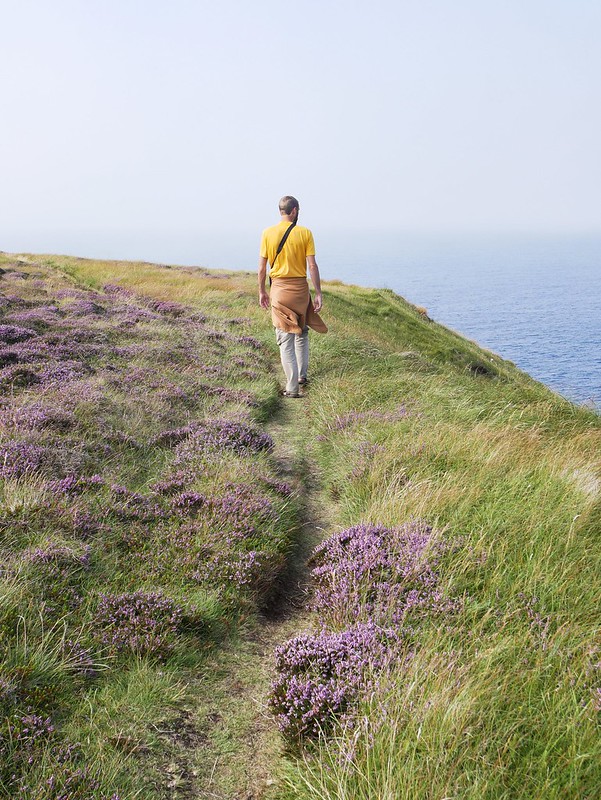 We couldn’t decide which route to take around the island so after a little breakfast we just made a decision and drove west. We stopped at a nature reserve to try and spot some hen harriers but all we saw was a common buzzard sitting in a lonely tree. It was at this point that we got a message, the orcas had been spotted in the south east of the island…literally the area we left just a couple hours ago. Dammit. We decided we had to risk it and drive 60km back to try and see them. Sadly as soon as we arrived messages came through saying they hadn’t seen them in a while and that was that, they’d vanished. 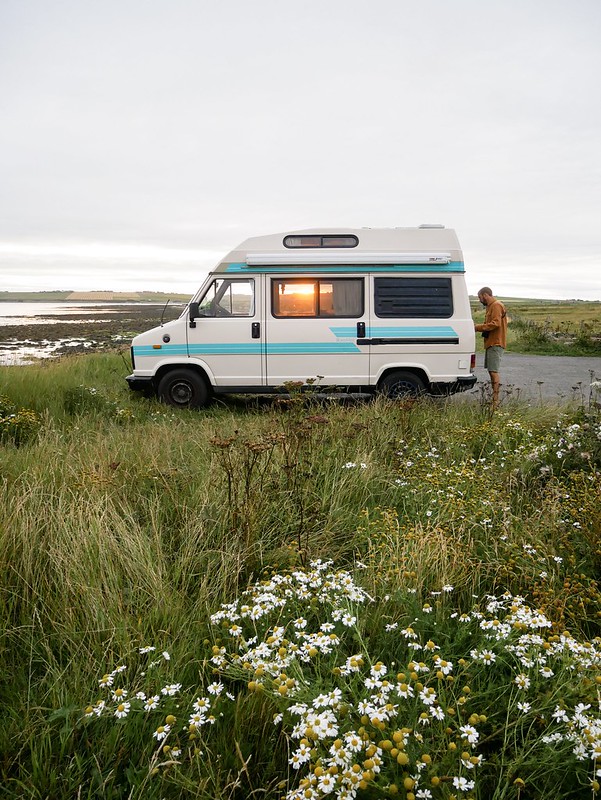 We figured we may as well continue seeing this area so we headed onto the islands of Burray and South Ronaldsay which are connected to Orkney mainland by bridges. We drove past a huge shipwreck, lying on it’s side with half of the rusty boat out the water. We drove all the way to the southern tip of Orkney and we couldn’t believe how close we were to the Scottish mainland, just 15km away as the crow flies. We opted for a coastal walk around Burwick and were surprised to find a barbed wire fence with 5 rows of wire like a prison yard along the whole pathway. So we had a sheer drop down a cliff on one side and the barbed wire on the other, we were really shocked that it was allowed, especially after I’d cut myself severely on a rare barbed wire fence in Shetland. Anyway, we did manage to spot a small pod of dolphins swim by but they were quite a distance away. 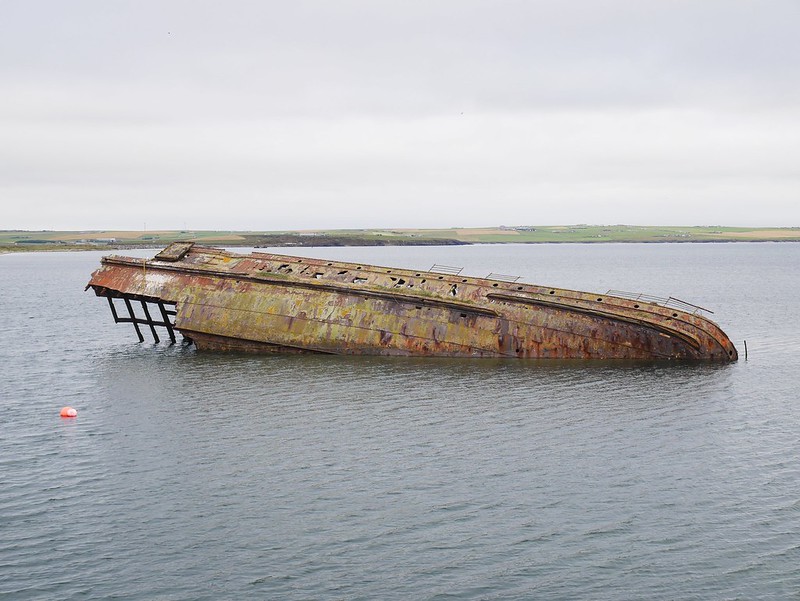 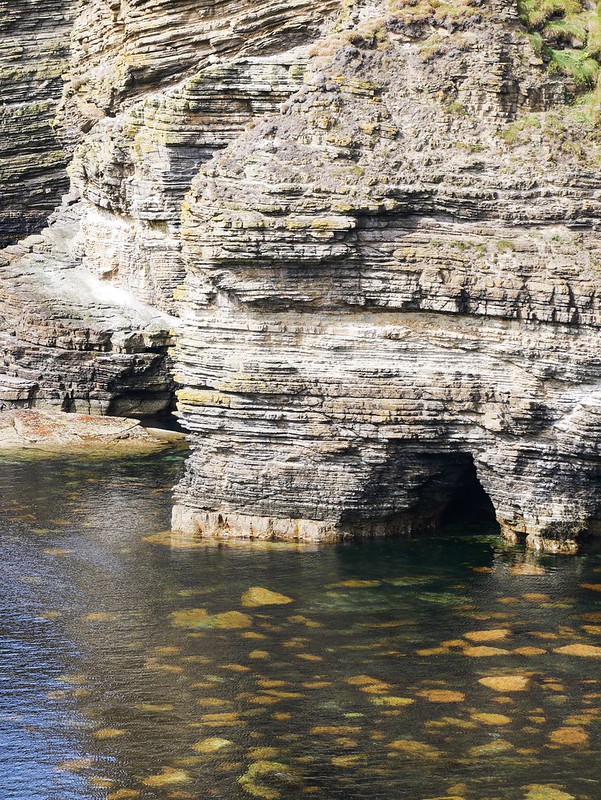 That afternoon we headed towards Hoxa Head where we found a beach en route to camp at. It was a strange area as there were half a dozen caravans pulled up by the beach and they looked rather permanent. We didn’t want to camp by them but there was a sort of grassy track you could drive onto above the beach where one lone caravan was so we decided to go there. The sun was shining so we opened the side doors of our van and enjoyed the beautiful view of the white sand beach. We even decided to brave a swim but it was extremely shallow which meant we had to wade out for ages and some strange creatures seemed to come out the sand and tap our feet which creeped me out. 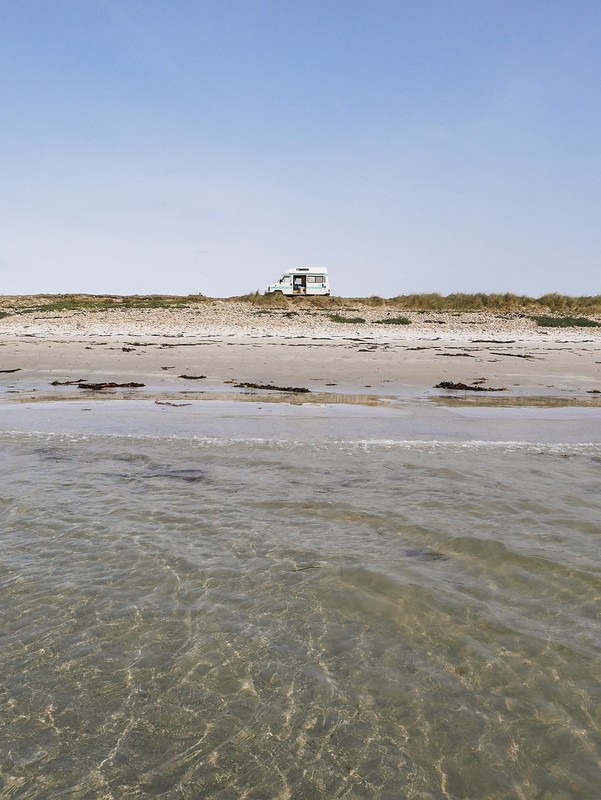 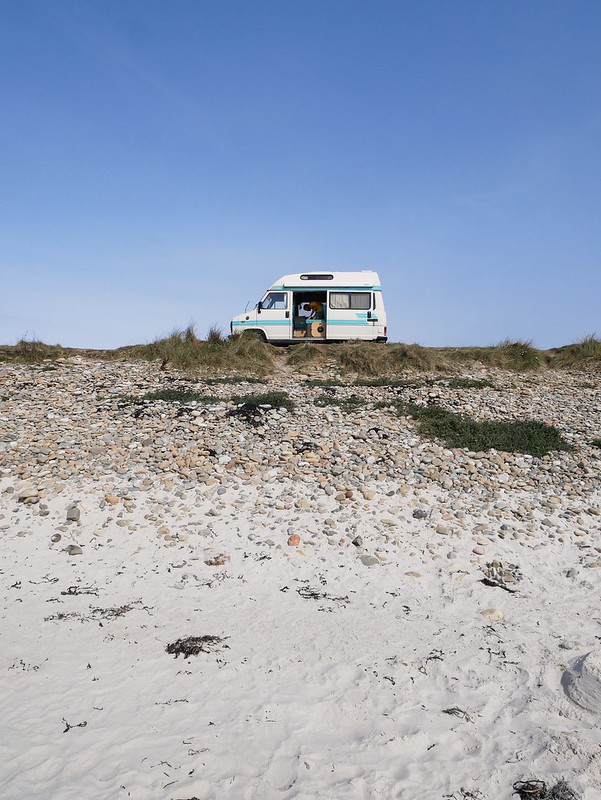 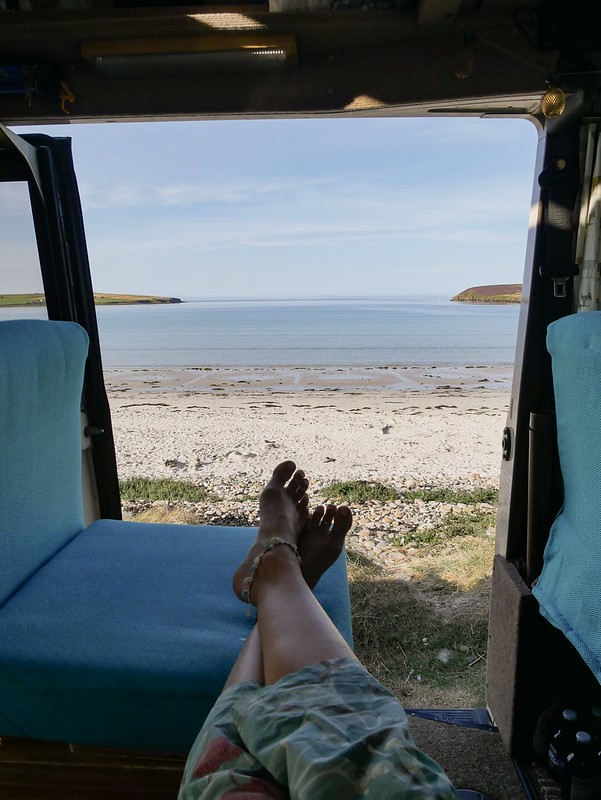 While I was preparing dinner a 4×4 style car pulled up right in front of us. We figured they were just there to check out the beach but then it became evident that they were camping right there. I was shocked. The caravan on this stretch of coast was about 80m away from us, the other caravans about 200m away. This twat parked up about 2.5 meters away from us!!! I was fuming. I wish I went out and said something there and then but instead I just let the anger build up inside me. As if it couldn’t get any worse, the couple set up a table with their cooking stove less than a meter from our van. What the heck was wrong with these idiots? Why wouldn’t they set it up on the other side of their car away from us? They were in their 50s and the wife was clearly a little embarrassed by her husbands ballsy move because she hid inside the car the whole time. At sunset it became obvious why he’d set up his kitchen right next to us, he could take lovely photos of his set up, his car blocked the caravans in the distance and it looked like no one else was around him. I tried to take a photo of Helga but all I had in the view was that nob. I wish I said more, but instead I went outside and made a rather snarky comment “do you normally camp this close to people?” he responded with some weird comment like “oh it was the best I could do with the road…” he obviously wasn’t getting it so I said “you’ve parked 2 meters away from us” and he just said “we’ll be quiet”.

There’s a few reasons why we free camp, one is it’s free and we can’t afford to stay in a campgrounds every night, nor do we need any of the facilities. Two, we don’t like neighbours, I hate hearing other people talking or slamming their doors (which is exactly what this couple were doing), and three, we love the tranquility of being on our own and hearing the sound of nature. But we obviously don’t own the land we camp on and this situation can happen, but it showed a total lack of camping etiquette. I expect it in busy places but what he did was selfish because he wanted to get the best view but in doing so he totally disregarded ours. The temptation to crouch on his bonnet and shit on his windscreen was quite high. 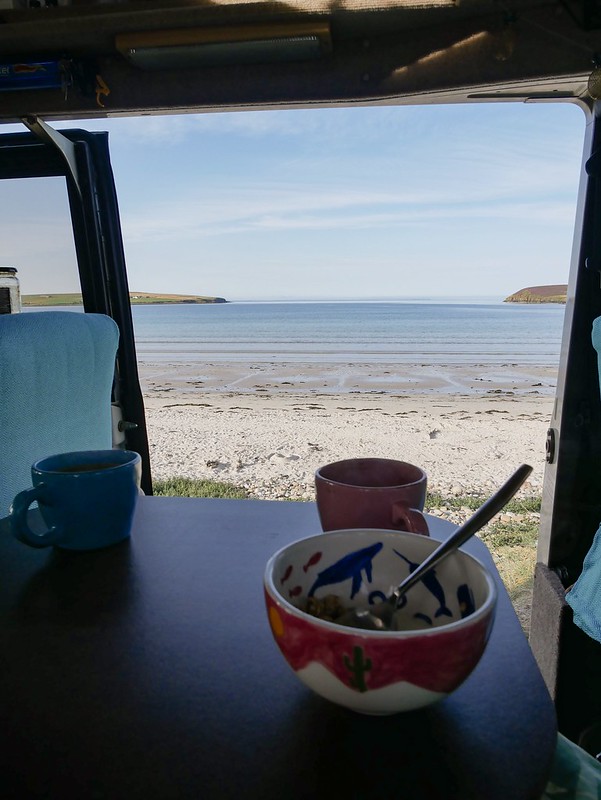 Anyway, we did a long coastal walk the next day from the beach to Hoxa Head and when we got back to Helga the sun was shining so we decided to do a little hand washing of our clothes and relax with the beautiful view of the beach, the sound of the waves and no neighbours, at last. 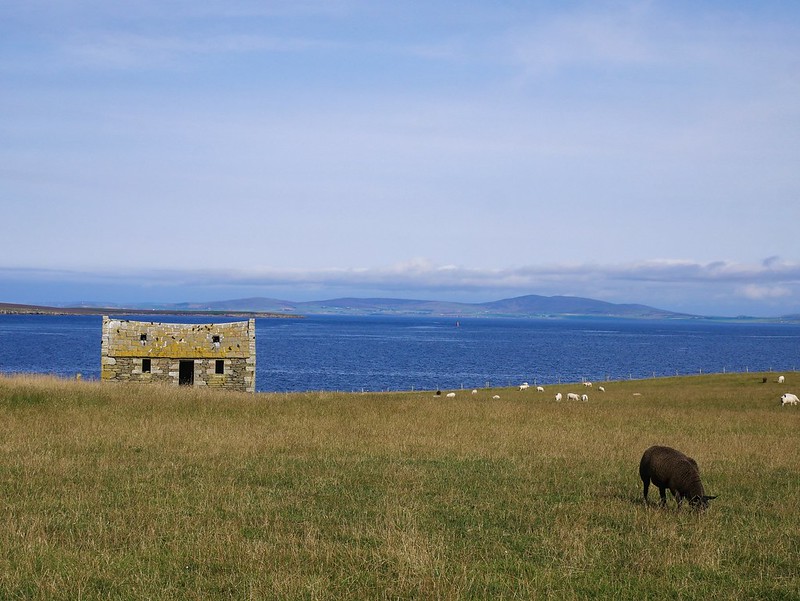 We ended up heading back down to Burwick area and tried a different hike around there. The stile to get onto the trail involved the usual little wooden step (albeit this one was extremely rotten and unsteady) and instead of a gap at the top to swing your leg over this one had a row of barbed wire. I don’t understand how Orkney gets away with this – surely there must be some law suits from people being seriously injured. It wasn’t the most impressive area of coast and the terrain was awful, either loose rocks on the beach or an overgrown track. So we headed back to Helga and camped in a lovely spot with a sea view. Behind us was a field of cows who were very curious. Whenever we walked over to them they all stood up and stormed our way. They crowded around the gate and followed my every move, if I crouched down they’d all put their heads low. It was so cute. 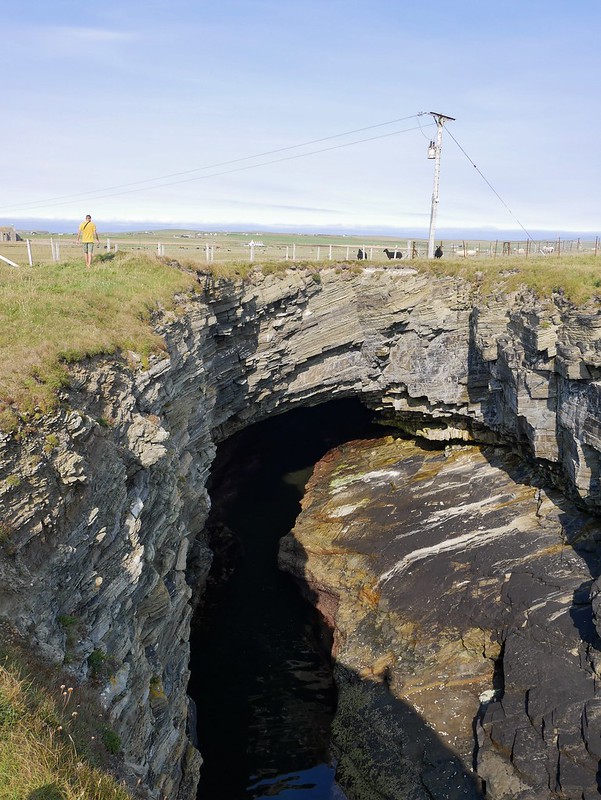 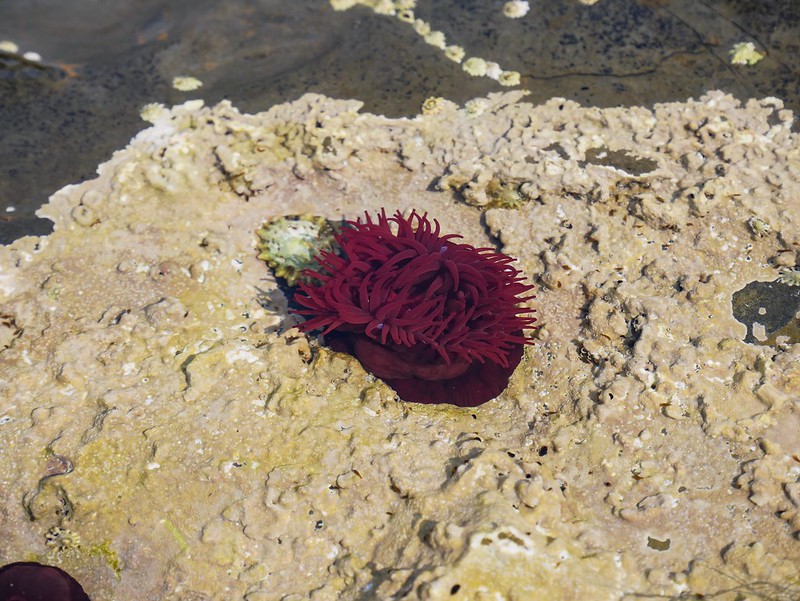 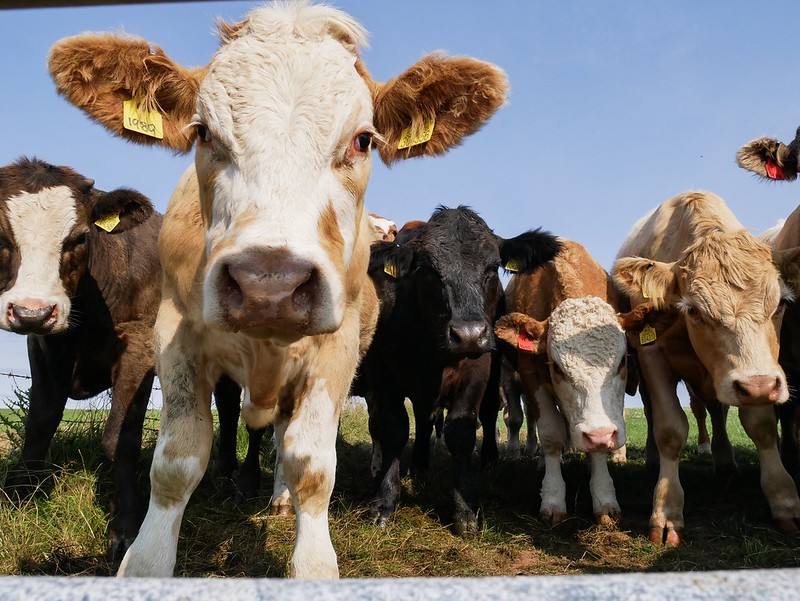 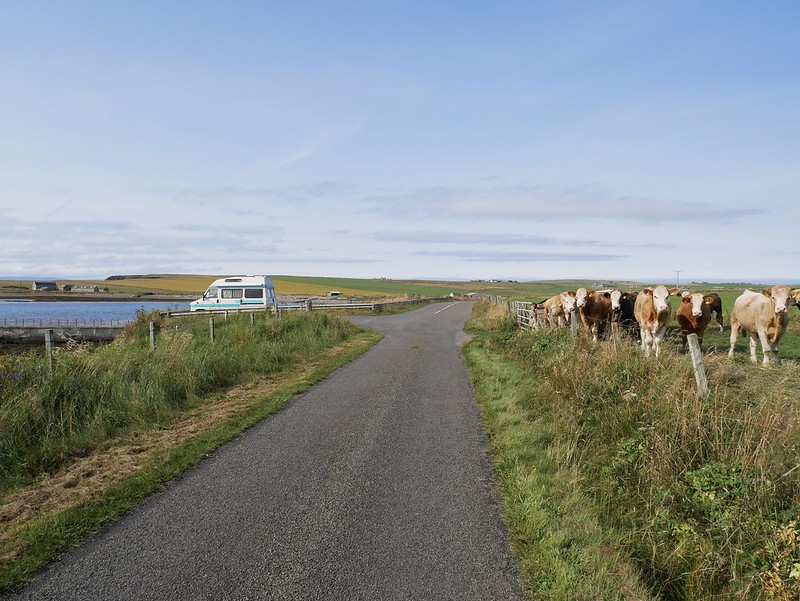 We did another coastal hike the next day, this time on the east coast. It was recommended in a hiking brochure I picked up from the information centre. It started with a sign post saying the trail was sponsored by the national lottery…I guess they had a rollover and skipped Orkney as the trail was awful. It was totally overgrown and within 50m our shoes were soaked from the wet grass. It was too far from the coast to really appreciate the view and we had to navigate our way over two stiles with barbed wire going across the top of them. We didn’t last long before we gave up, hopped back in Helga and decided to leave this area. The orcas were playing hard to get so we figured we’d continue our journey around the main island and head west. 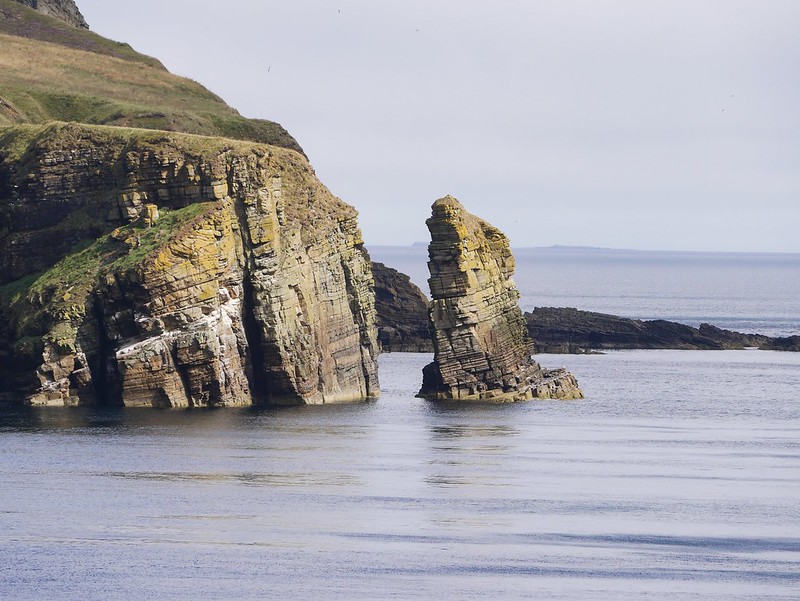