Well, you’d of thought after two days of tracking orcas we’d be satisfied, but watching them is like a drug, we always want more. No wildlife encounter is the same and there’s something extra special about orcas, maybe because it’s so nice seeing them roaming free in the wild, unlike the ones who were stolen and put into tiny tanks. The ferry to Orkney leaves roughly every two days so we postponed it to the next slot which gave us a couple more days of possible orca encounters.

The next day was grey and gloomy, we woke up by the sea and fog soon descended on us. We were shattered from the past two days, I guess it was a mix of adrenaline, running up hills, driving, stress from parking and straining my eyes through binoculars and my camera lens. So we decided to just have a well needed relax day – unless the orcas were spotted in which case bring on round 3!

We walked into the nearby village to use the toilet in the morning, everyone seems so friendly in these small places we just love it. A sweet lady was mowing her lawn and stopped to chat to us. She’s owned her house here for years but only used it for holidays until the past year or so and she sold up in England and made the big move to Shetland. She was so friendly and was telling us about the wild swimming she does and how her and a few others from a Facebook group were going swimming with the mareel tonight. She must’ve seen our confused faces and explained that mareel was bioluminescent plankton!! We had no idea that sort of magical phenomenon happened in Shetland so we decided to pop by later on and check it out for ourselves. She also said the northern lights are starting up now and a few people have managed to capture pictures of them already in late August…maybe we’ll never leave Shetland after all.

Apparently the east side of Shetland has an algae bloom visible from space. It gives the sea a green tinge in the day, but at night time when it’s pitch black the sea sparkles with mareel. Sadly you can’t just stand on the shore and watch the magic unfold, the plankton only sparkles when it’s activated which basically means you need to move about in the water. We’ve always wanted to witness it so we decided we’d head across to Levernwick and see it for ourselves.

It’s a shame we had to wait until about 10:45 for it to be dark enough outside. It was also a shame how damn cold it was, my goodness it was probably about 10° but it felt much colder because it was blowing an absolute gale. We walked down to the beach and stared out at the dark sea…trying to pluck up the courage to go in. A few people came out of the darkness and started wading in and eventually we joined in – we realised we couldn’t wait around any longer otherwise all the people would come back to shore and then we’d definitely be too scared to get in the water on our own.

It actually wasn’t that cold in the water, I guess that shows you how cold it was outside! Most people were wearing wetsuits but there were a few crazy folks like us doing it in our swimmers. We waded in up to our crutch, not really wanting to go any deeper because quite frankly it’s scary as hell being in the sea at night. We were kicking our legs and swaying our hands through the water to activate the plankton. It was visible, little sparkles were coming off our legs as we moved about…but it was very weak. I mean, I’ve never witnessed it before so I don’t have anything to compare it to, but it was kind of hard to tell if it was sparkling or if my eyes were just playing tricks on me. We spoke to a local who said it’s much better if you wear goggles and look underwater, but that’s a whole other level of scary for me. We spent about five minutes stomping about in the water and watching the little blue sparkles before we decided to head back to Helga. We didn’t want to go to bed all salty so we had to grin and bare a quick rinse off outside in the wind, pulling Helga’s shower hose out our back door.

It’s now day two without any orca sightings, our ferry to Orkney was supposed to be this evening but we cancelled it again with the hope that we’ll get to witness these beautiful animals again. So we spent our morning at a little harbour where we had a good view out to sea, and then we decided to stay at a different harbour that evening. It was a lovely spot with colourful fishing boats in a very sheltered inlet. There were a few seals swimming really close to the jetty so we decided to walk along and check them out. They were the biggest seals we’ve seen so far, and a little unattractive actually. Instead of the typical cute face with puppy dog eyes, these ones looked like heavy weight boxers with a face the same shape as a bull terrier dog. They were very active and they kept springing out the water, sometimes with a wriggling fish in their mouth. We tried to dip the GoPro underwater to film them swimming but to do this meant Craig was down a ladder, leaning towards the sea with one arm dipping the GoPro into the water and the other clinging onto the ladder for dear life. One came right up to us, his huge eyes staring at me through the water. His head slowly poked out the water and then he suddenly spotted Craig hovering over the sea and freaked out (unsurprisingly) and he backed off a few meters. 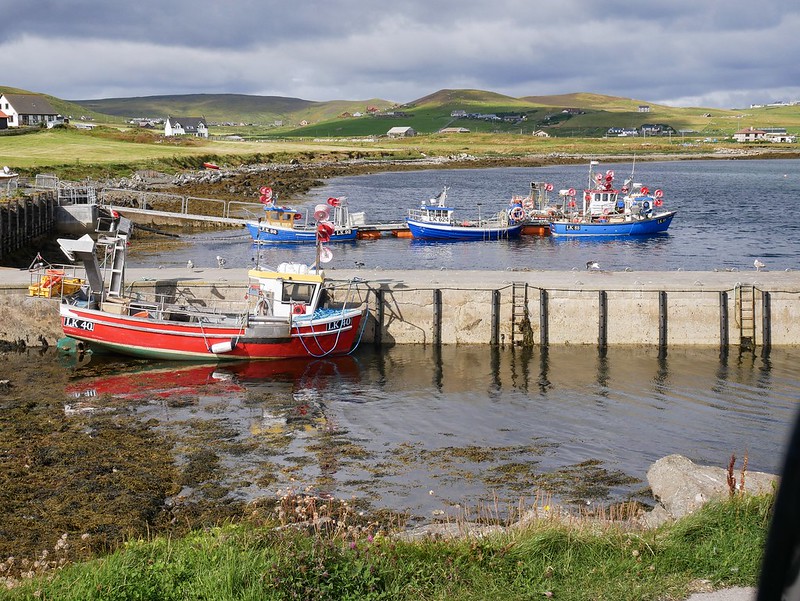 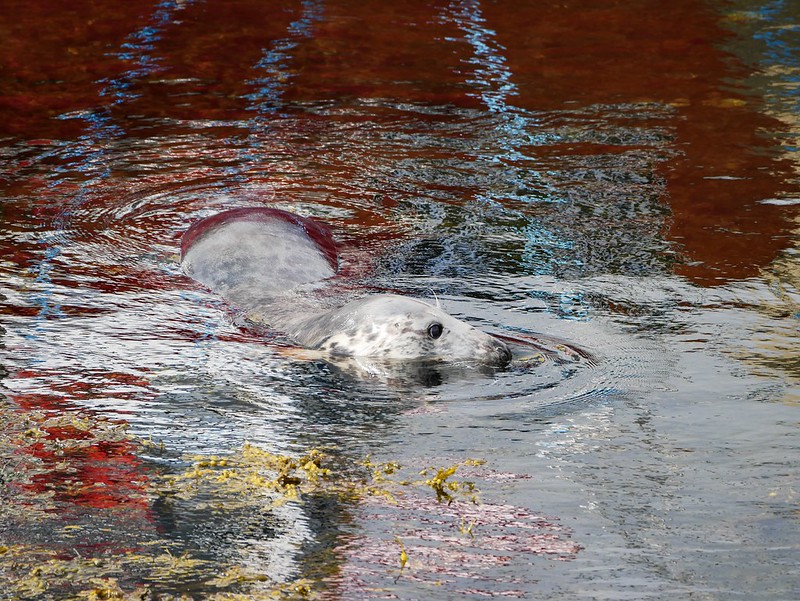 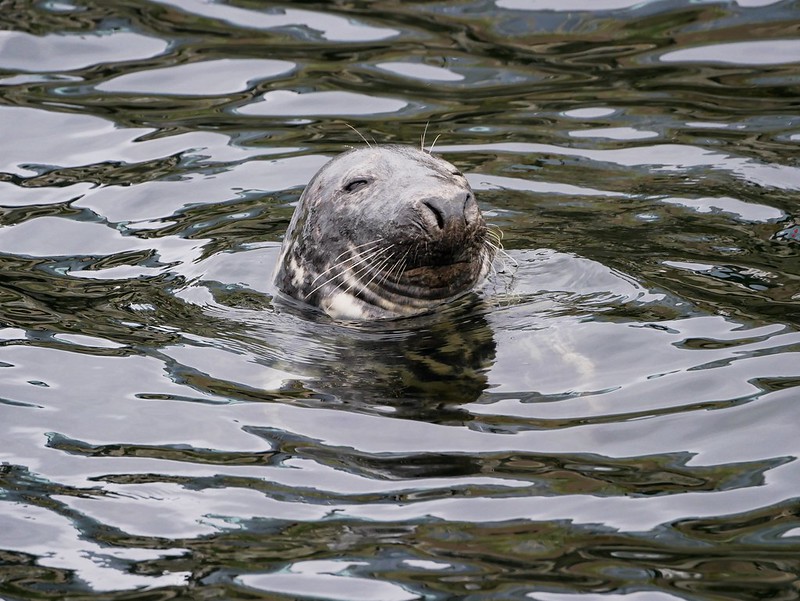 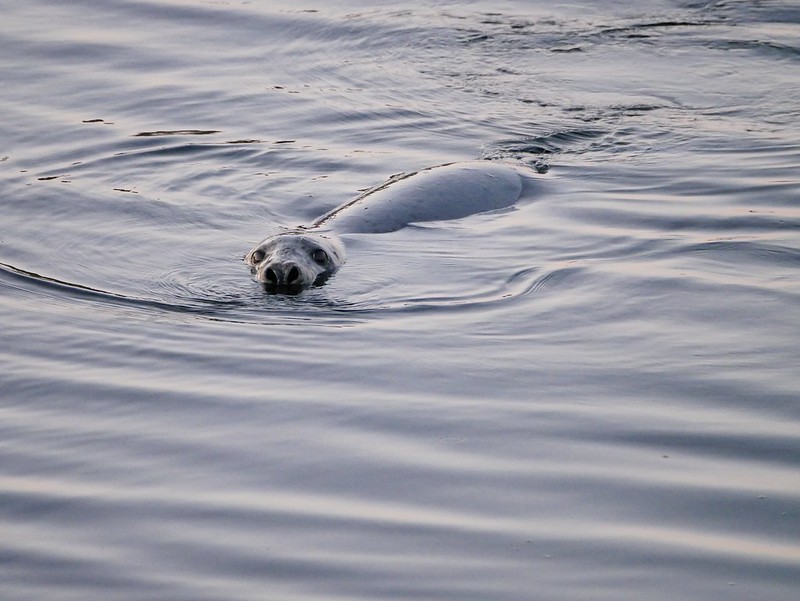 We decided to go for a little coastal walk but it ended rather rapidly when the ground beneath me gave way. It was only a drop of about a meter but it happened so quickly that I just instinctively threw my hand out to grab something, and it happened to be a barbed wire fence. Bloody typical really, we’ve hardly seen any barbed wire in Shetland, most fences are just smooth wire but this rogue one had a top row of the evil spiky metal. To be honest I looked down at my hand expecting to see bone but it wasn’t bad at all. It hurt like hell and all my fingers were ripped and bleeding but the cuts weren’t deep and it’s a bloody miracle that it wasn’t worse. I also slammed into the rocky bank on my leg which now donned a huge bruise and a rip on my fairly new trousers. It’s funny how I love gory horror films but if I’m the one who’s injured and bleeding I get rather wheezy and light headed. Craig helped me clean up the mess and wrapped every finger in a plaster like some kind of gang member. 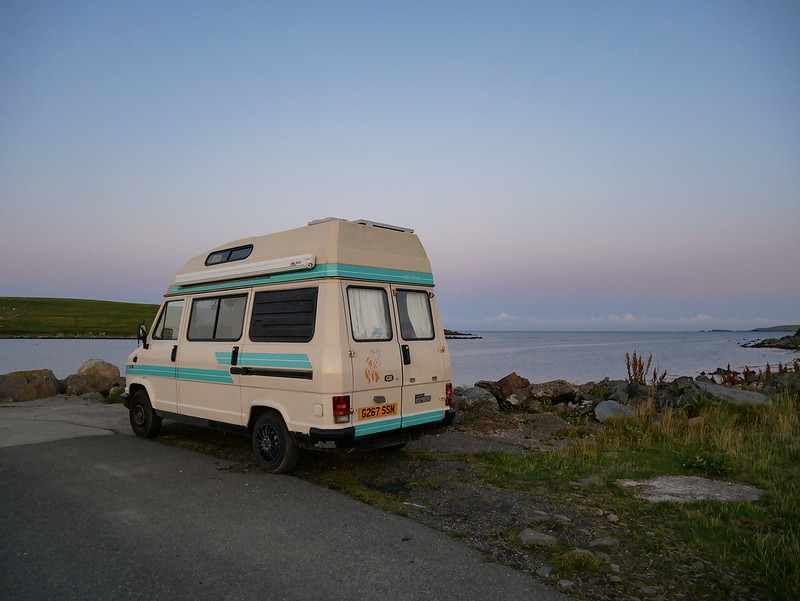 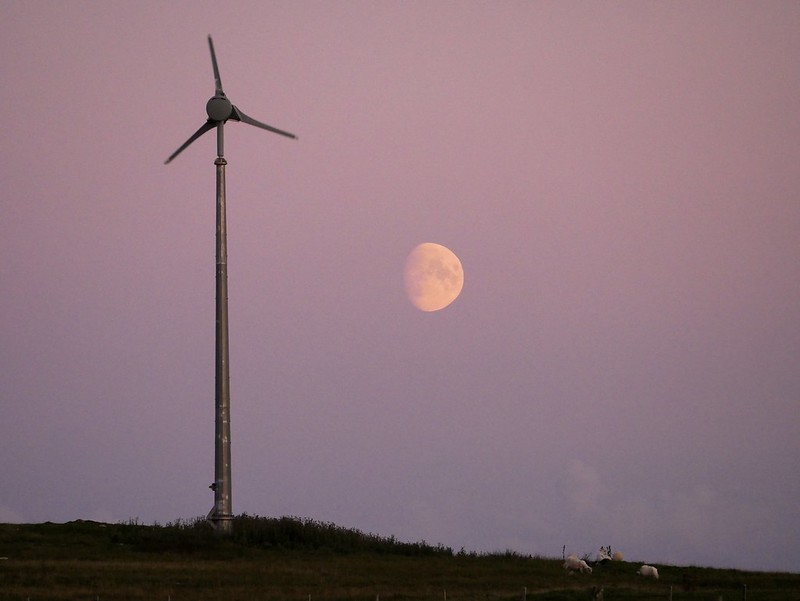 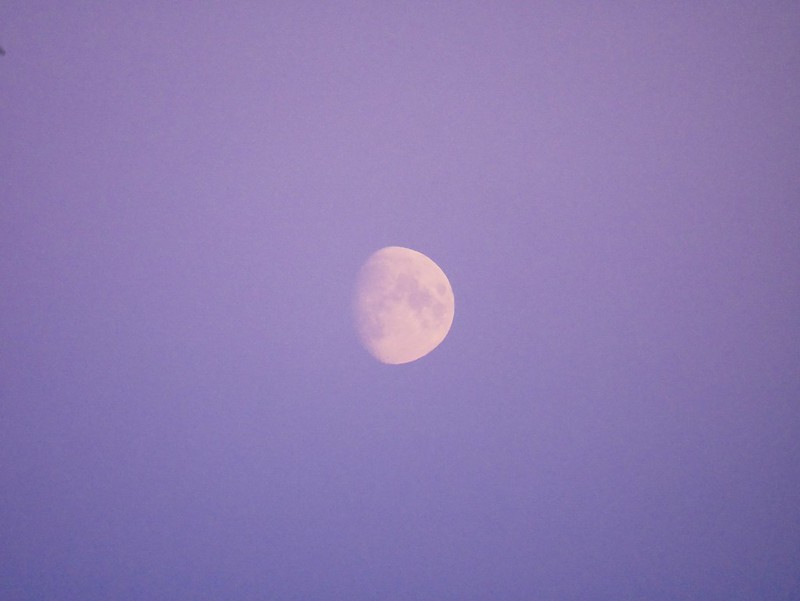 The next day we stuck to the east coast of the mainland and went for a little coastal walk. It was a lovely area that we hadn’t been to before, it’s amazing how many hidden gems there are around the island. There were a few gravelly beaches and rocks poking out the sea with seals lounging on them. They were very relaxed and didn’t jump into the water when they saw us which is rare. I always like it when they find a rock that’s barely big enough for them so they rest their belly on it and shape their body like a banana, with their head and tail in the air. 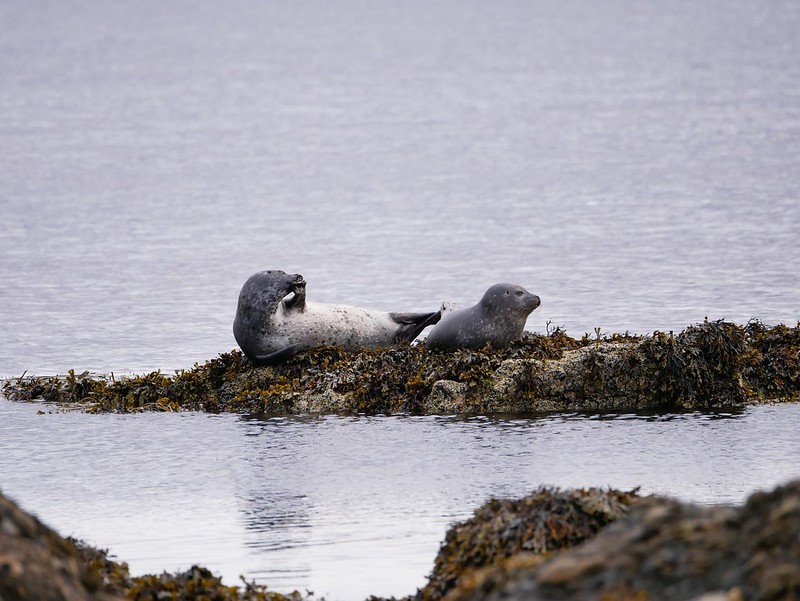 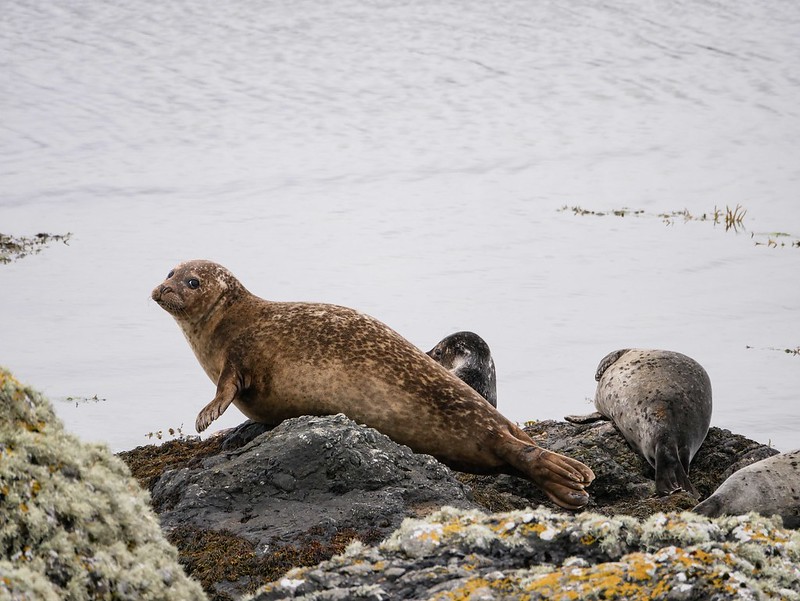 As we walked along the gravely beach I spotted some sea glass and then I realised it was everywhere. I love collecting sea glass, and in most areas it’s allowed due to it not being a natural product…in theory picking up sea glass is actually a form of picking up litter as it’s all just broken pieces of glass from factory’s. We found so many different shades of green and blue and also some lovely little pieces of old ceramics, perfectly rounded by the sea. An older chap walked by and stopped for a chat with us, he then proceeded to pick up some sea glass and give it to me which was sweet and without thinking I put out my hand out to take them from him – forgetting I had my injury from the barbed wire! Just before we started the hike I removed the plasters which we’d covered in Savlon overnight, so my hand looked like a goddam horror scene with wrinkly fingers and cuts. How embarrassing. 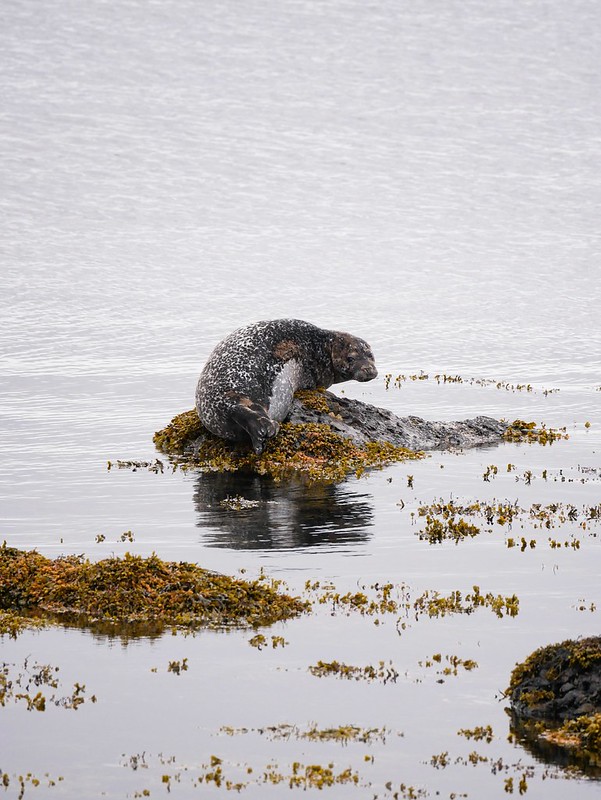 The walk wasn’t as fun as the beach combing to be honest. We did spot an otter but he was the most illusive one so far and vanished very quickly. On our way back we said hello to a local farmer. He was a lovely old chap and when we talked about our reason for staying – the orcas – he had a good story to tell us. One time he was out in the bay right infront of us, fishing away in his row boat and minding his own business when he noticed a pod of orcas swimming straight towards him. It was a couple years ago and while we thought there were a lot of seals now, he said there used to be so many more and that’s why the orcas were coming into the bay. While we would of been ecstatic to witness them from a little boat, this chap was scared shitless and quickly paddled to shore. He then stood on the beach and watched as the big bulls waited in the deep water and the smaller orcas swam into the shallows, flushing the seals out to the bulls.

We did finally get news of the orcas whereabouts and it made our decision to leave Shetland a little easier. They were spotted swimming around the coastline of Orkney!! We couldn’t believe it, both the 27s and 64s pods were seen close to shore. It definitely felt like it was the sign we needed to leave Shetland. Although I’m still a little sad to leave, we really loved our month exploring the islands and they felt very ‘us’ so I’m sure it will be a place we’ll return to in the future. So with a final brisk swim in the clear sea (even the beaches around Lerwick are stunning) we boarded our ferry to Orkney. 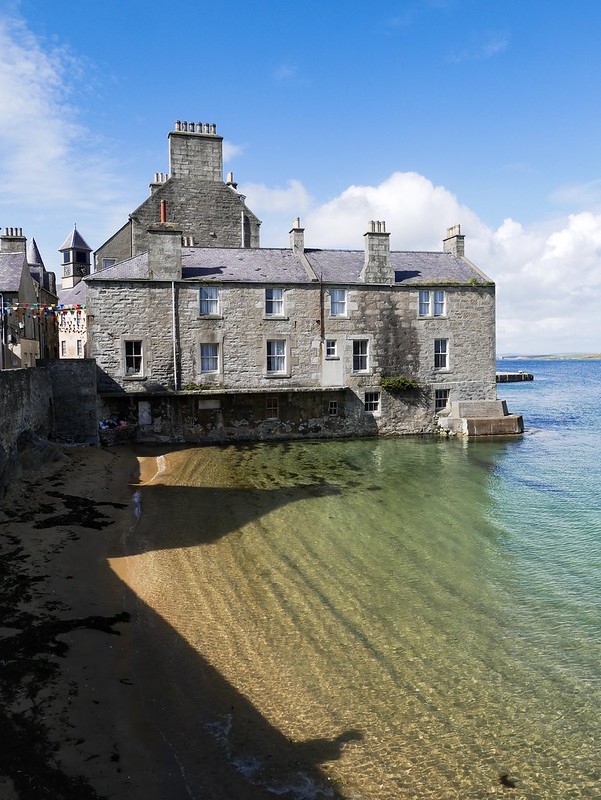 The captain of the ferry said he was taking us a different route around Fair Isle, this time around the east coast. Fair Isle is part of Shetland but it sits in the middle of the sea between Shetland mainland and Orkney. It’s extremely remote and famous for its Fair Isle jumpers, knitted with the local wool – and we know all about the abundance of sheep on Shetland! The island looked beautiful even from afar with dramatic cliffs plummeting into the sea. We got a brief glimpse of some dolphins and then we were enshrouded by darkness until we arrived at Kirkwall where we pitched up for the night at the ferry port. 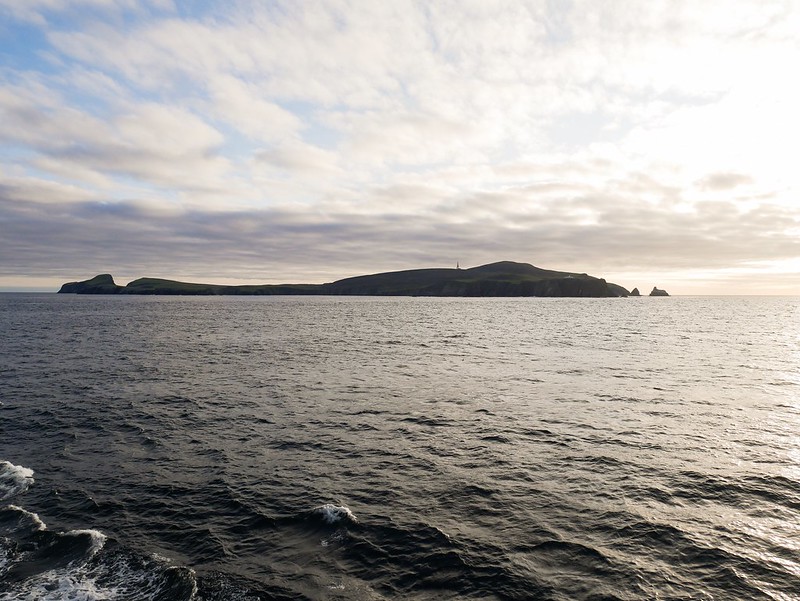 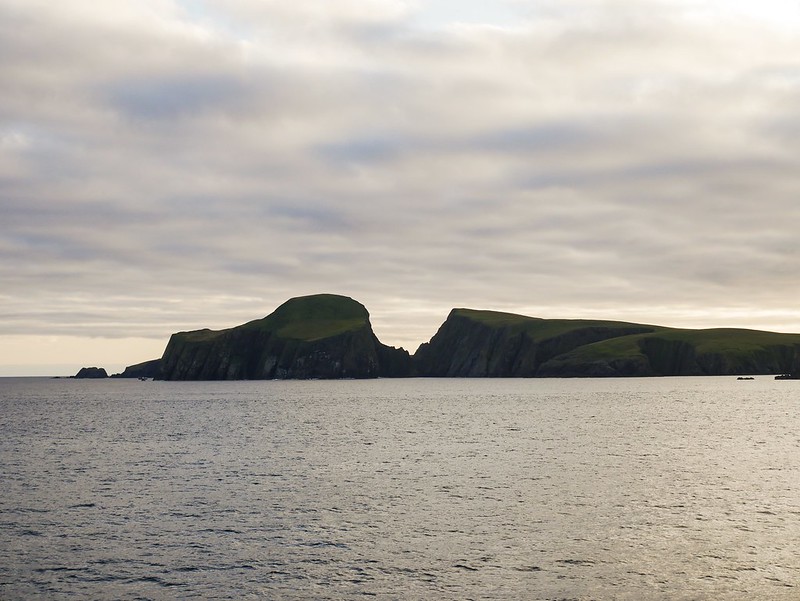