After a month exploring Shetland we decided it was time to leave and explore more of Scotland. We had a ferry booked to the Orkney Islands and after witnessing the orcas yesterday we felt like we’d achieved everything we wanted to here…but there was definitely a niggle in the back of my mind. We had orca fever…or so we’ve named it, a total obsession with these incredible creatures. Now that we knew they were around the islands again we wondered if it was foolish to leave.

We continued as if it was our last day though and started our morning with a final swim in the Caribbean looking Meal Beach. It was a blustery morning and about 12° but we had blue skies and it actually felt quite comfortable in the sea. We had a freshwater shower afterwards and filled Helga up with more water. Then a message came through ‘two orcas spotted’ about 10km north of us as the crow flies – driving however would be about 30km. There was a gas station up that area anyway so we decided to try and see them and get some petrol at the same time. We called the ferry company and cancelled our crossing for today, we had to try and see the orcas again! 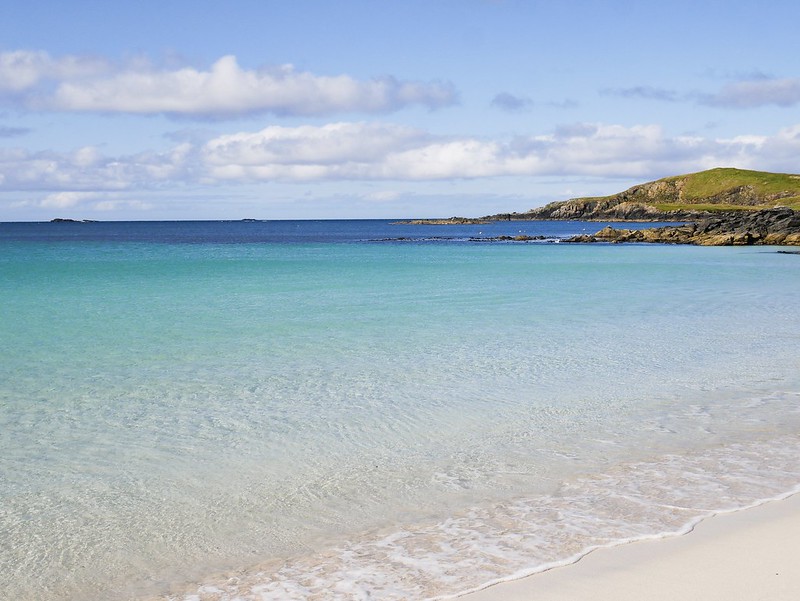 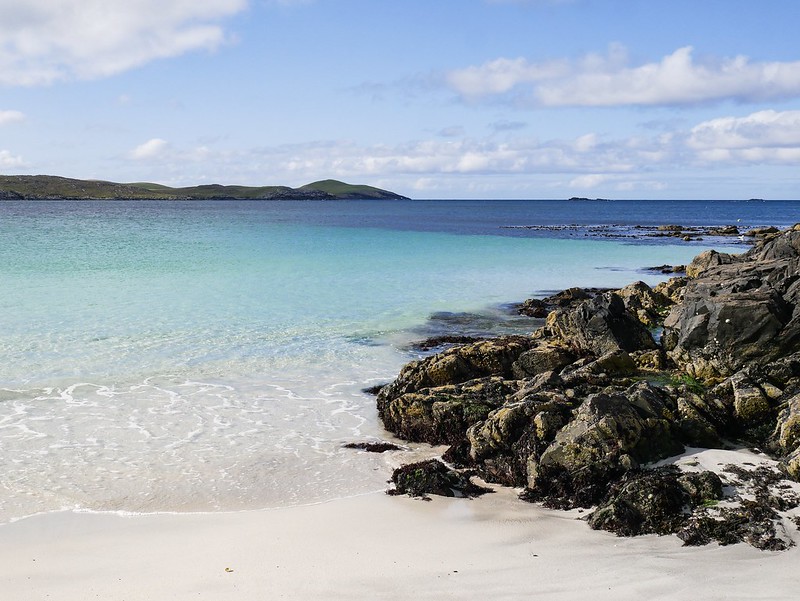 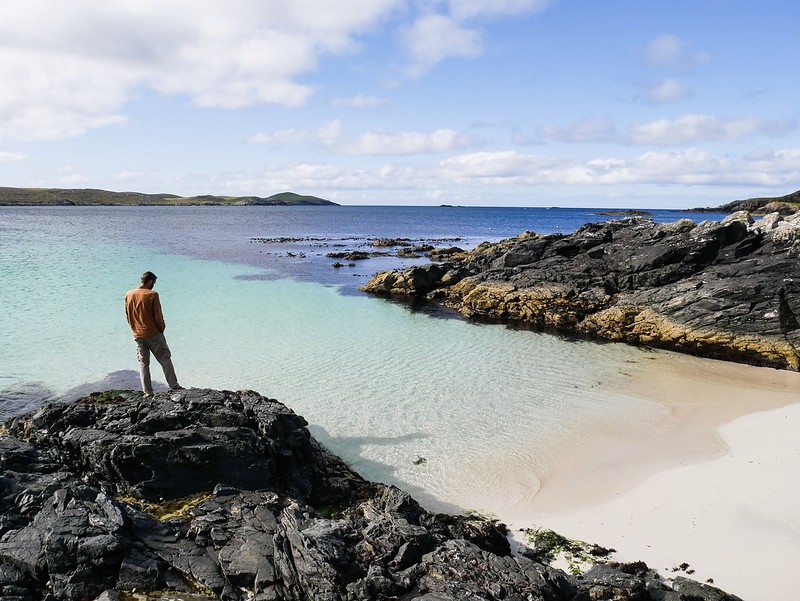 Then a message came through saying some orcas were spotted way off the north east of the island, about 100km away!! It seemed a bit odd and we didn’t know what information was the most accurate. Well, it turned out that the original orcas that were spotted today decided to venture south back to where we’d come from and it also turned out that there was a bloomin’ petrol station there that we’d unknowingly driven past on a couple of occasions. So that was quite frustrating knowing we’s wasted fuel. But anyway, we whizzed back down to West Burra and to a headland near Hamnavoe. 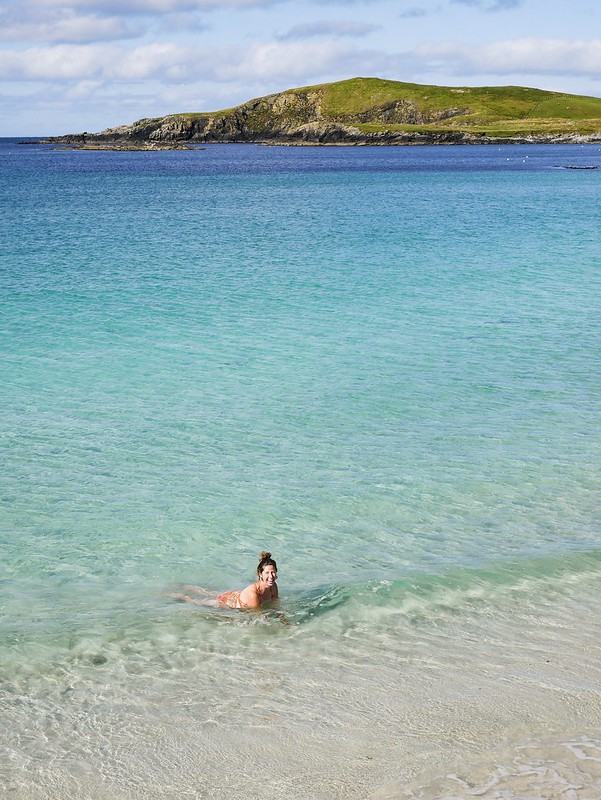 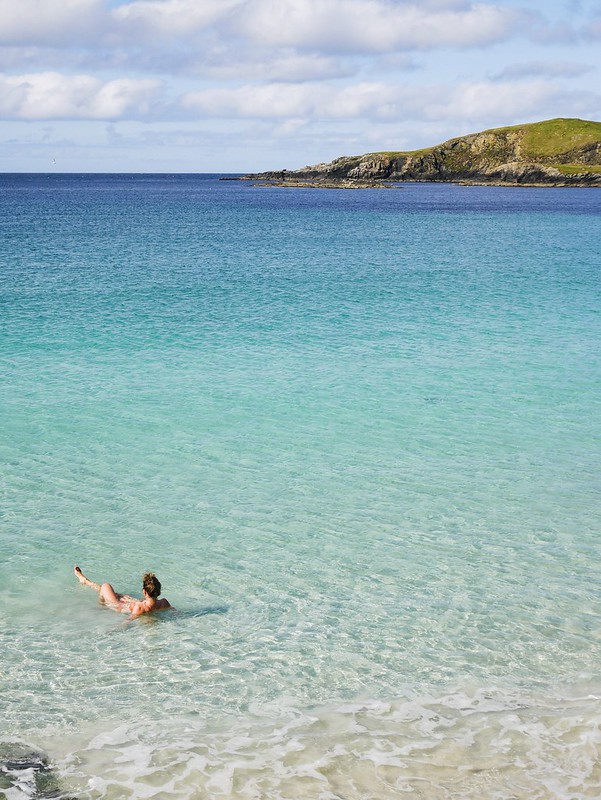 The orcas were visible with binoculars but they were still very far away. It was anyone’s guess if they’d come our way or veer off and we waited a good 30 minutes or so before it became evident that they were coming right for us. While we were busy photographing them there was a huge splash just 15m away. An orca had just leaped out the water, possibly pursuing a seal. Wow!! The other orcas joined and they all swam in circles very close to a rocky area by the shore. I don’t know if they succeeded in catching the seal but they continued on their journey, swimming just a few meters from us as they headed into a little bay. It’s bizarre how close they skirt along the coastline. There were houses all around us, imagine having orcas outside your kitchen window! 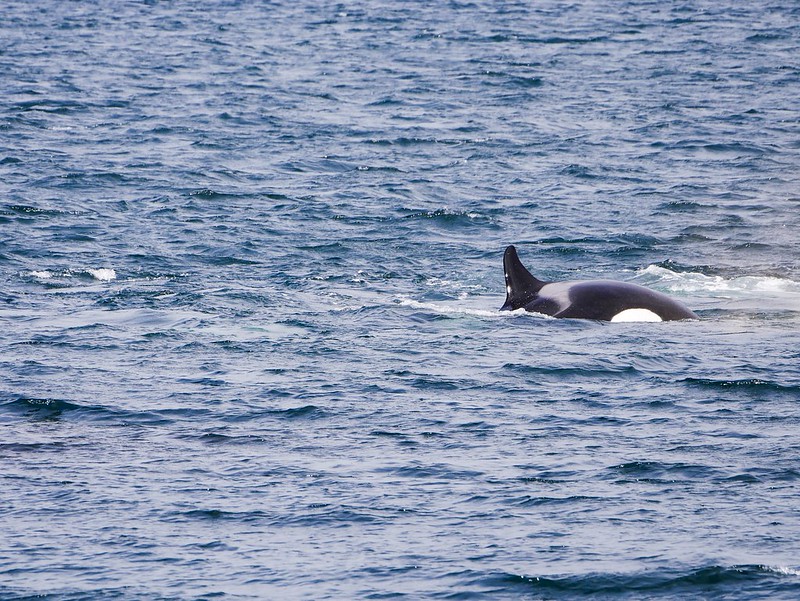 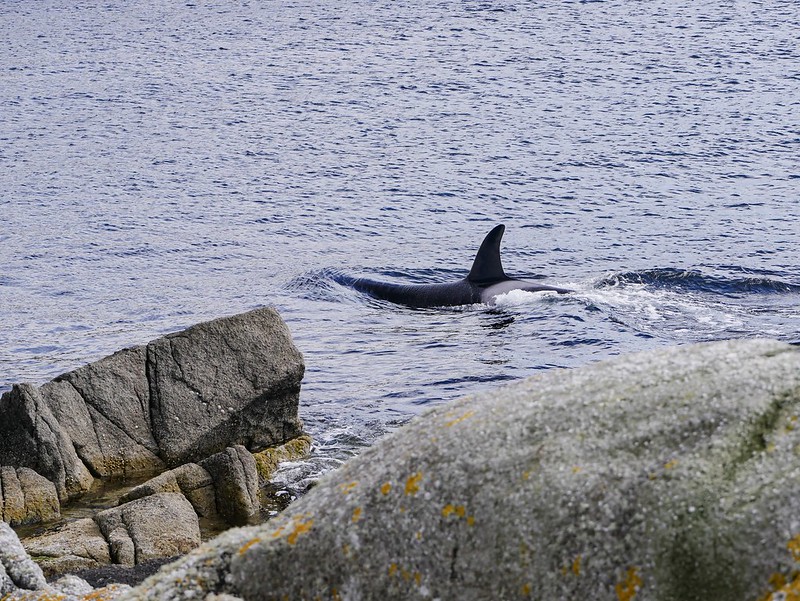 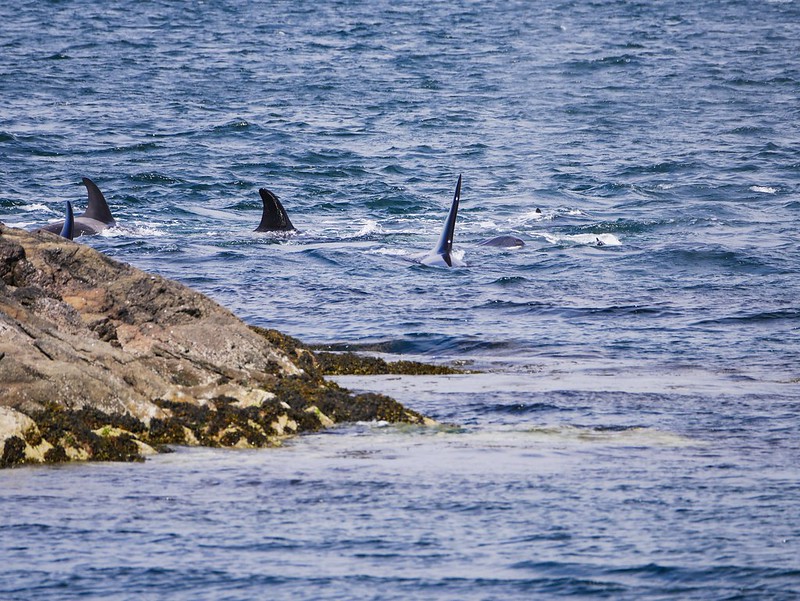 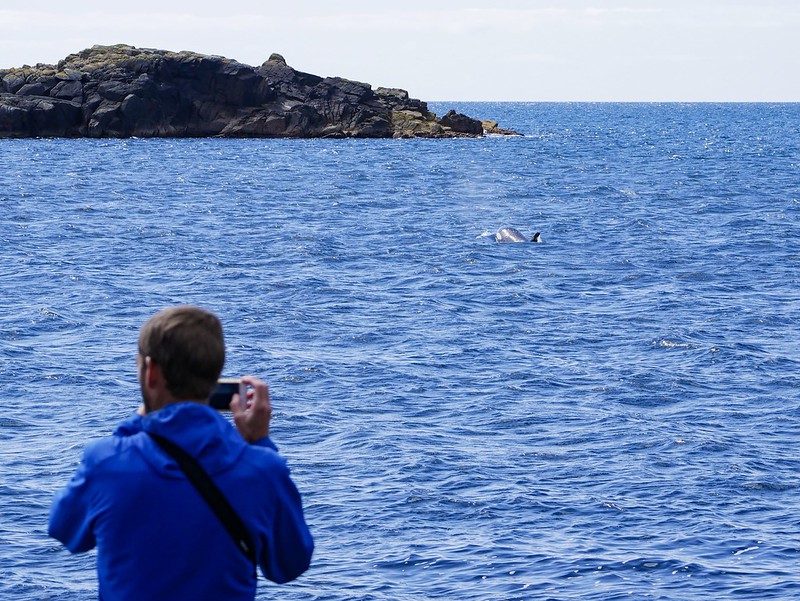 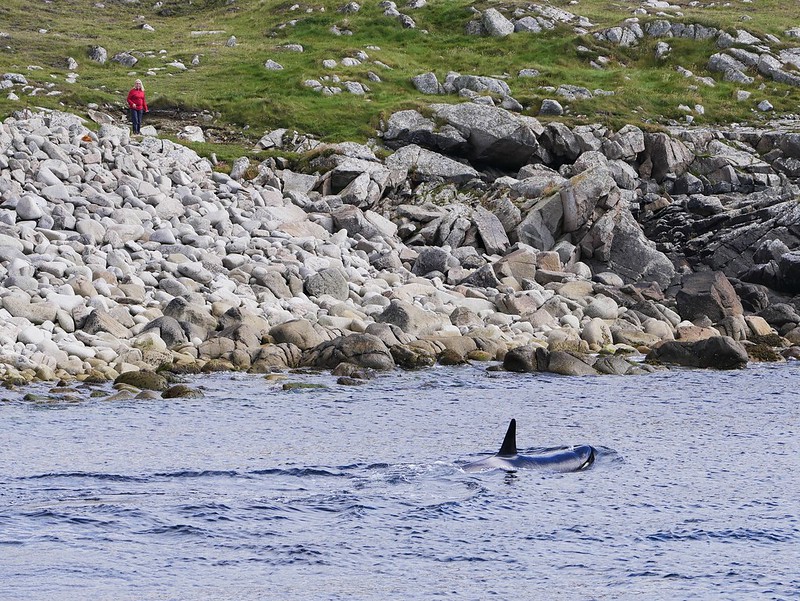 After exploring the bay they went around a headland with a lighthouse on the tip and by that point we were running like hooligans back to the van. It was a race against time to get further south to see them again but also to find a limited parking space. Our first stop wasn’t a great encounter, the orcas swam by very quickly but most people stayed to watch them go totally out of sight. We knew we had to make a move to the next location so once again we were sprinting back to Helga with Craig frantically driving and me trying to figure out our next location. I spotted a road that led to the coast but we hadn’t driven down it before so I didn’t know if there would be anywhere to park. It was a risk but we took it and to our delight there were a few parking spaces. In fact we were the third car to arrive and the first was Hugh Harrop a chap who’s been extensively studying the orcas around Shetland. He’s also the man in charge of the orca Facebook group where we’ve been getting these very handy updates about any sightings. At the same time as meeting him we realised the little beach to our right was covered in seals…orcas favourite meal (well, some orca solely eat fish but these transient ones survive by hunting big animals like seals, dolphins etc). 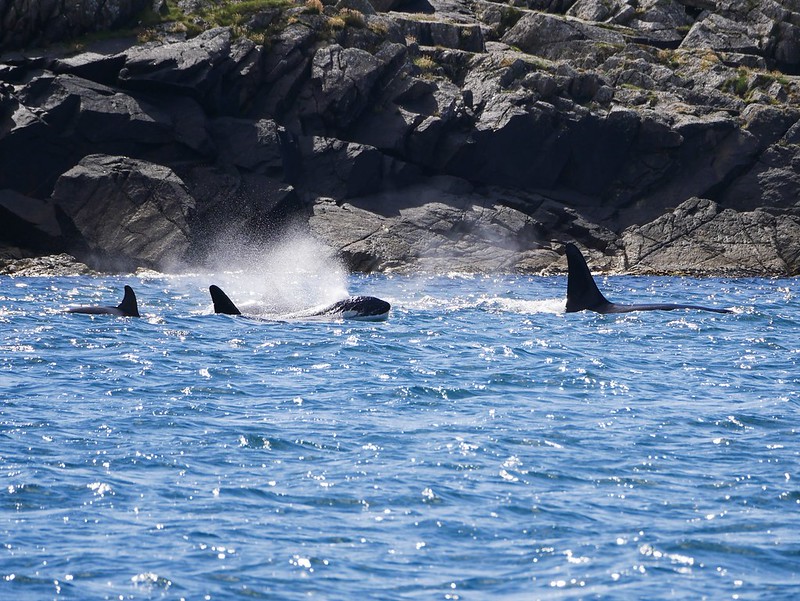 Only a couple other vehicles pulled up so Hugh talked to everyone and explained that even though we were on land and not in a boat, we still had to follow the marine code. Seeing as the beach was covered in seals he knew that if we walked over there they would flee from us and basically unknowingly swim towards the orcas. But it would be because of humans and not the way nature was meant to play out, so instead he said we’d walk a safe distance away and make our way up to the edge of the bay on a cliff instead. Well, after just a few meters of walking someone spotted the orcas and they were coming right into the bay! Hugh decided to test the water (excuse the pun) and see how skittish the seals were, they all looked his way so he knew it wouldn’t work but then a stupid kid approached the fence line and that was enough to scare a few seals into the water. Most of the seals weren’t bothered though and stayed on the beach so we were able to watch from the fence line after all. It was like having front row seats to a real life wildlife documentary. A couple of orcas waited at the opening of the bay to prevent any seals escaping, while the smaller orcas swam around the bay, in shallower water to corral the seals. It was incredible seeing how fast they could swim, wiggling their tale and propelling through the sea with such ease. A few seals popped their heads out the water, bobbing on the surface and trying to figure out what the heck was going on. 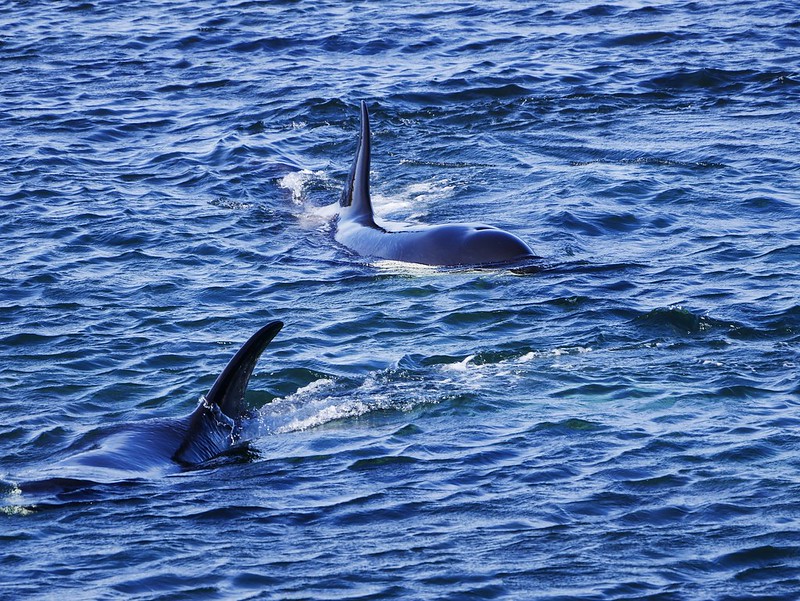 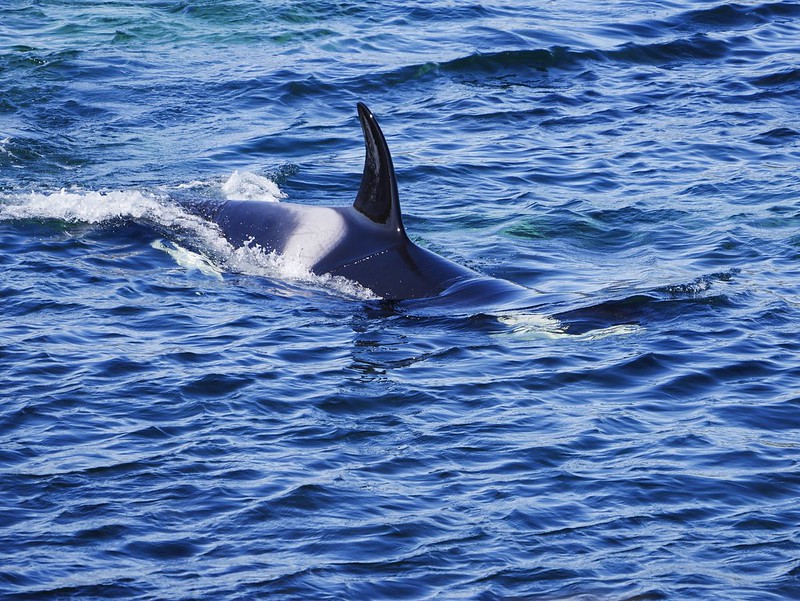 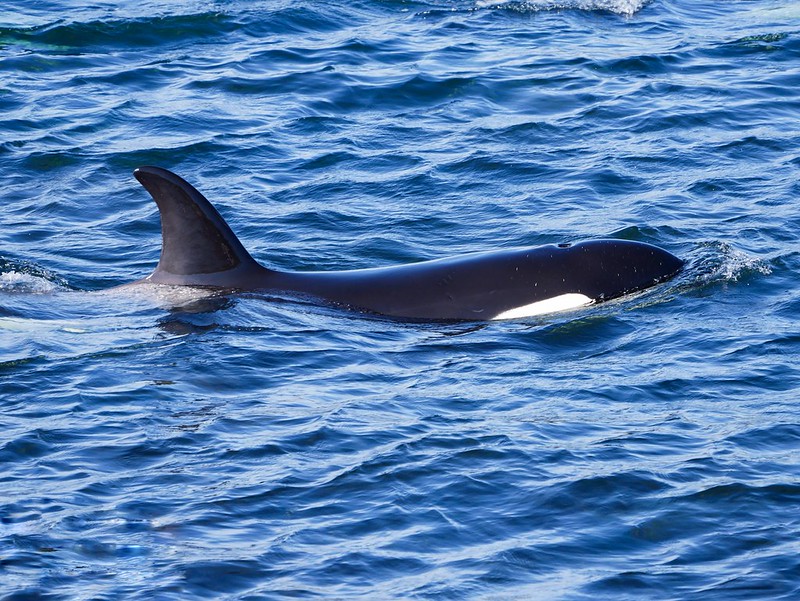 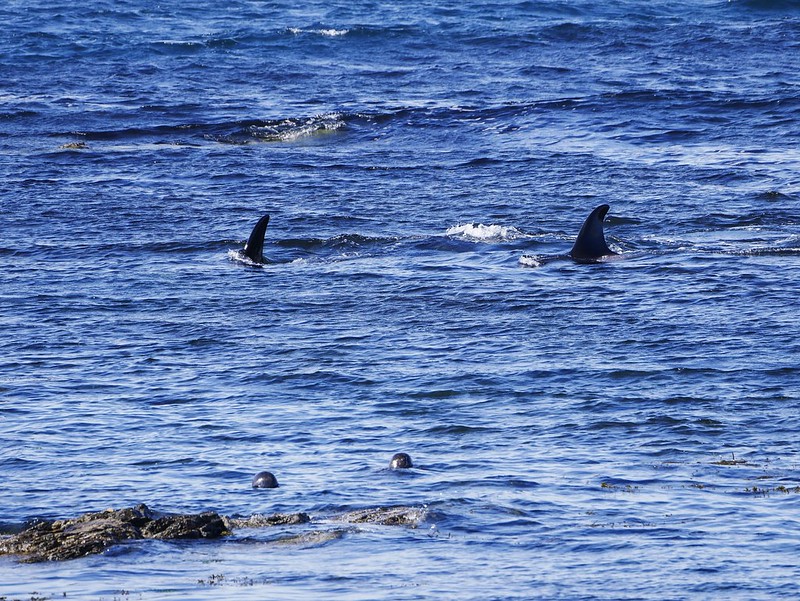 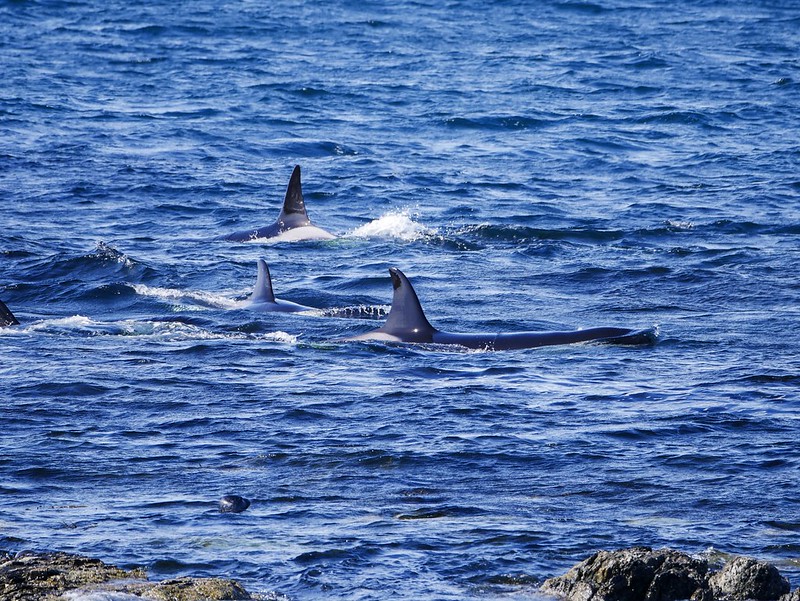 We thought it would be an absolute blood bath but in reality we only saw them kill one seal, well, the water turned bright red for a few seconds so we knew they caught at least one. Sometimes the orcas like to play with their food before eating it, they’ve been known to play ‘ping pong’ where one orca will use its tail like a bat to whack the prey to another member of the pod. They also tend to get their prey by stunning the animal, which can involve them silently swimming through the sea at great speed directly into the prey, throwing it right out the water. And while fish eating orcas around the world are very vocal, communicating with clicks and squeaks underwater, the transient orcas are silent so they can hunt stealthily. 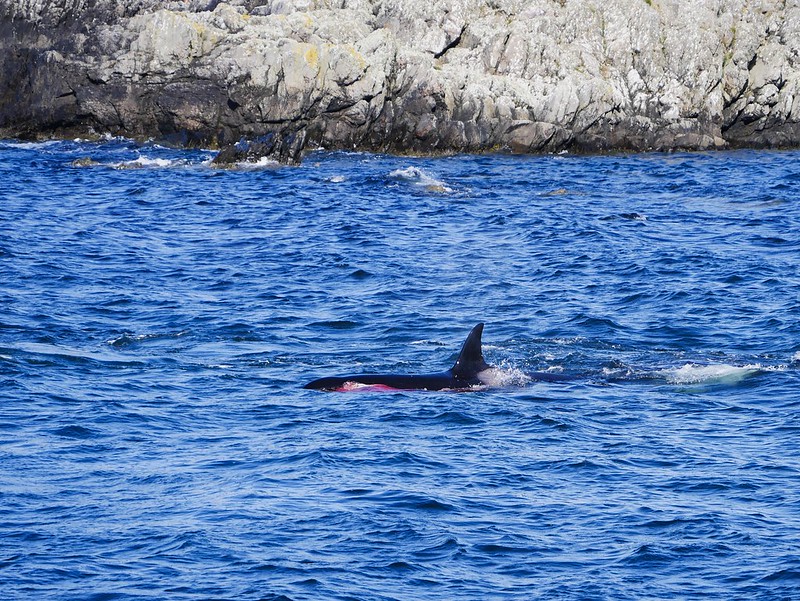 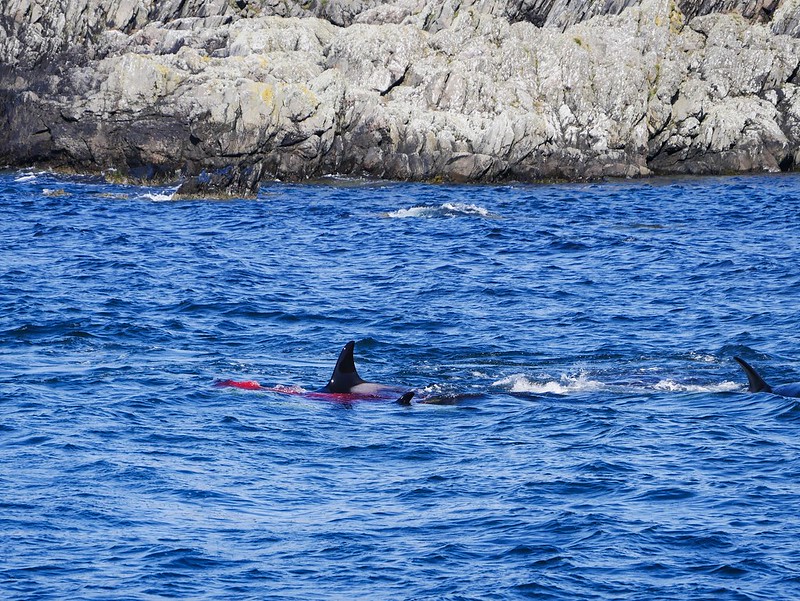 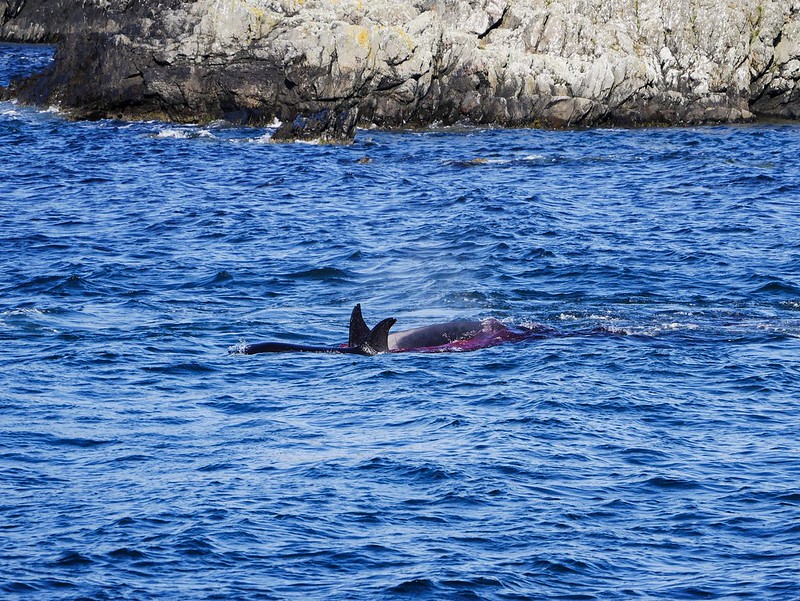 We were very lucky to witness them hunting in this little bay for about 10 minutes and eventually they made their way out and continued south…and so did we. We found a lay by to park in near Banna Minn Beach and began running up a road towards the cliffs. We didn’t know if they’d come into this bay without a beach full of seals on offer so we figured the cliff was a better option if they just swam past. We passed through a Croft with lots of curious Shetland ponies. Some were extremely confident and followed me in a rather intimidating manner…it seems strange to be scared of such a small animal but I’m pretty sure they could still give me a good nudge or bite. We didn’t have time to admire them as we were jogging towards the steep grassy cliff tops. The view wasn’t great, we were very high up and when the orcas came along they weren’t very close to the shore but then they unexpectedly headed into the bay at Banna Minn. There were quite a lot of people on the cliff tops, maybe 15 and as soon as we realised the orcas were coming in everyone descended down the hill like a scene from Gloucester’s annual Cheese-Rolling competition where people chase a rolling cheese down an almost vertical hill. 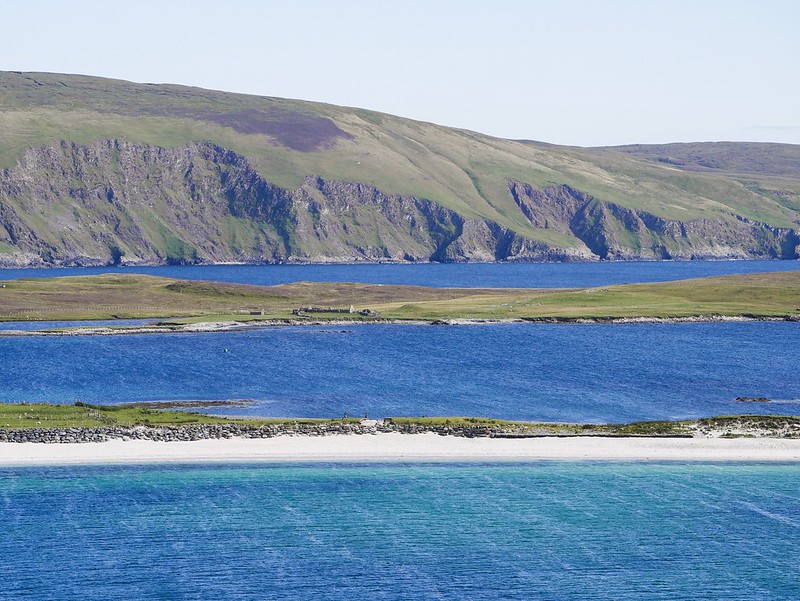 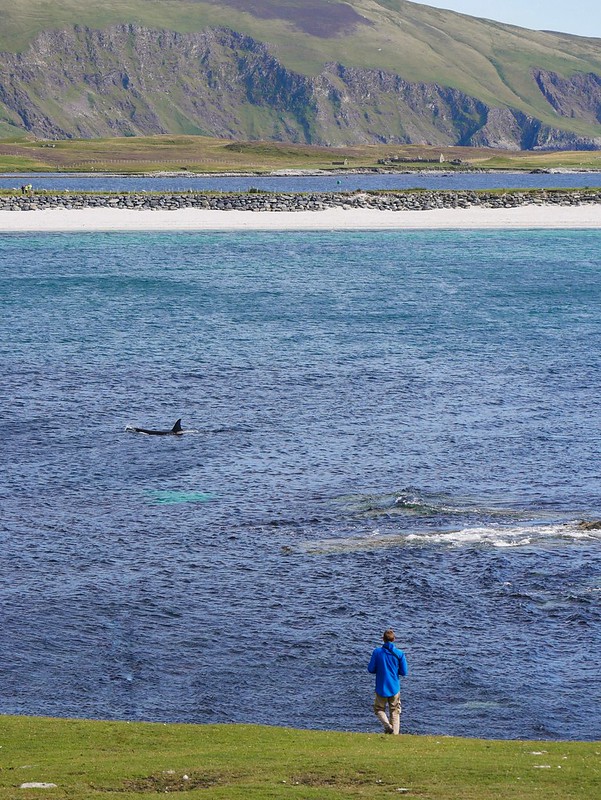 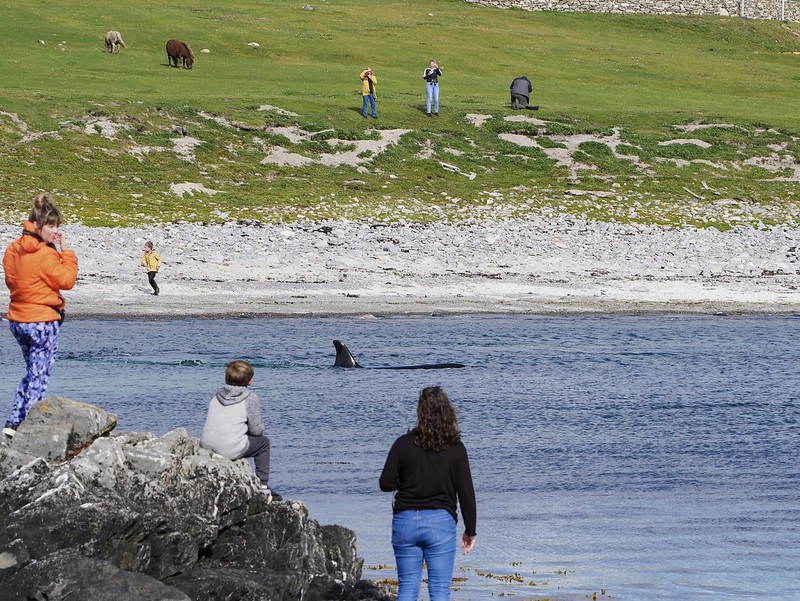 Once again the orcas came remarkably close to the shoreline, one even swam just a few meters from a little sandy beach where a kid was screaming with excitement (I don’t blame him) and a Shetland pony was casually strolling along the beach. After our close encounter they headed across the other side of the bay where locals and tourists stood on the cliffs watching in awe. Woweee! What a day. 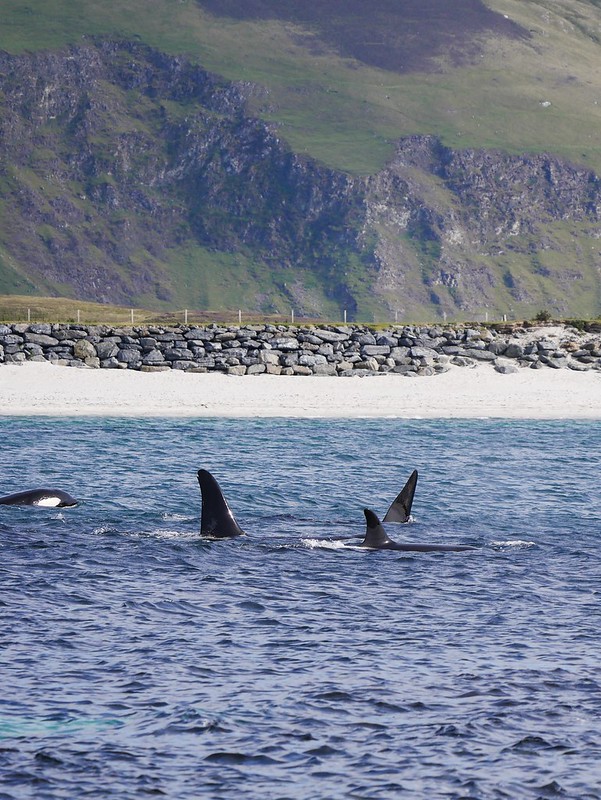 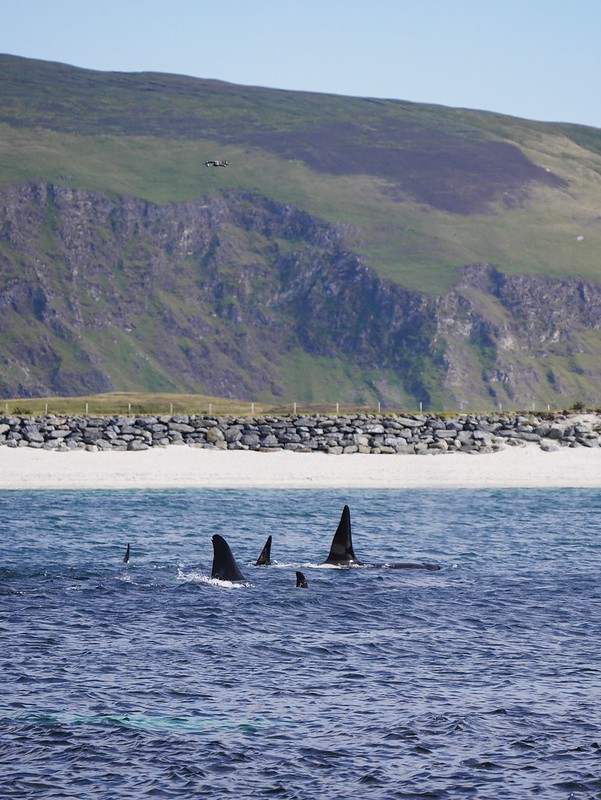 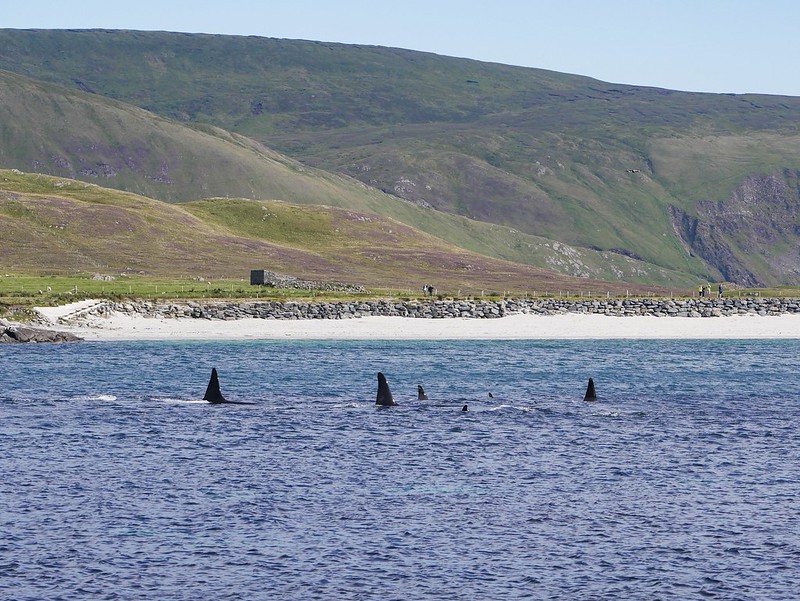 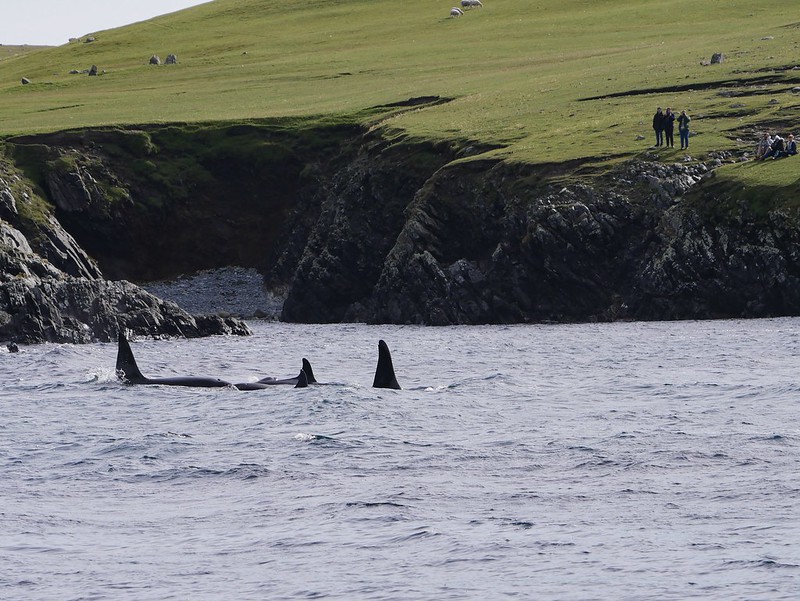 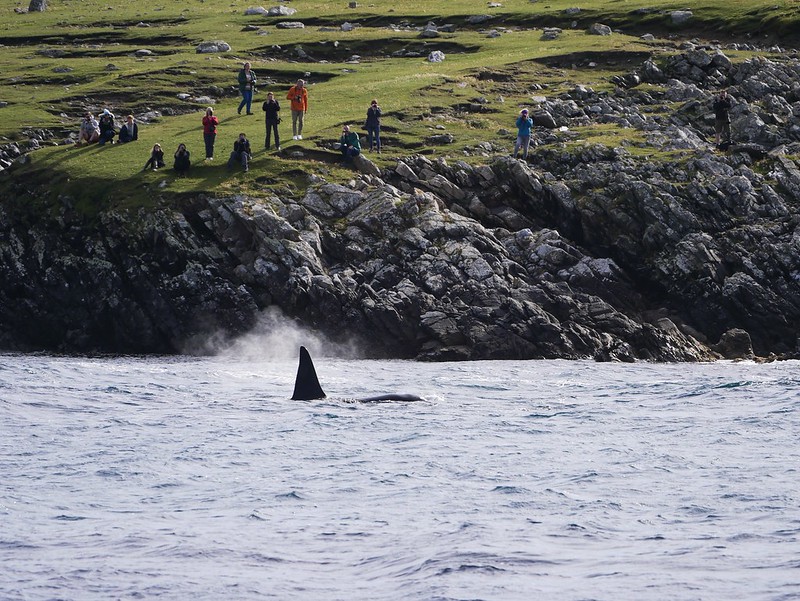 It was getting late in the day now and we should of just called it a day but instead we decided to continue driving south. We were at the southern end of West Burra, a rather small, narrow island and we’d have to get off the island and head down quite a distance to the first spot where we might have a chance of seeing them. We decided to go for it anyway and made our way to Ireland where they’d been seen swimming past the day before. A few other people were scanning the ocean when we arrived but after an hour there was still no sign of them. We decided to head back to Helga and have some dinner while we waited. A few updates told us they were quite far out in the open sea just milling about so Craig decided to call his Dad for a catch up. As the sun was setting and the clouds turning a candy floss pink Craig suddenly spotted the orcas coming into the bay “Dad there’s orcas I’ve got to go!” We ran out and watched them swim under the cliffs across the bay. The sound of them coming to the surface and shooting water out their spout filled the air. Maybe it bounced off the cliffs as we could hear them so clearly and I just adore that noise. The sea was reflecting the pink clouds and we watched as the occasional black fin rose out the water and a spray of mist shot skyward. 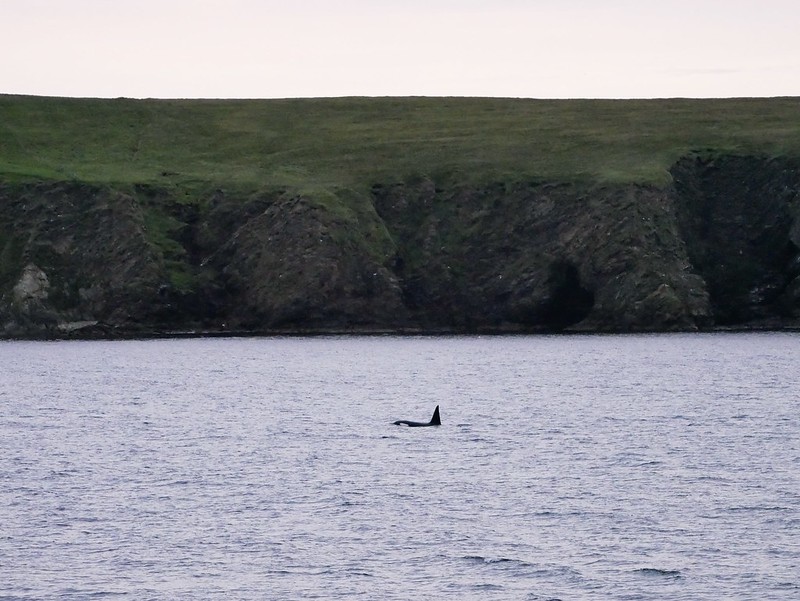 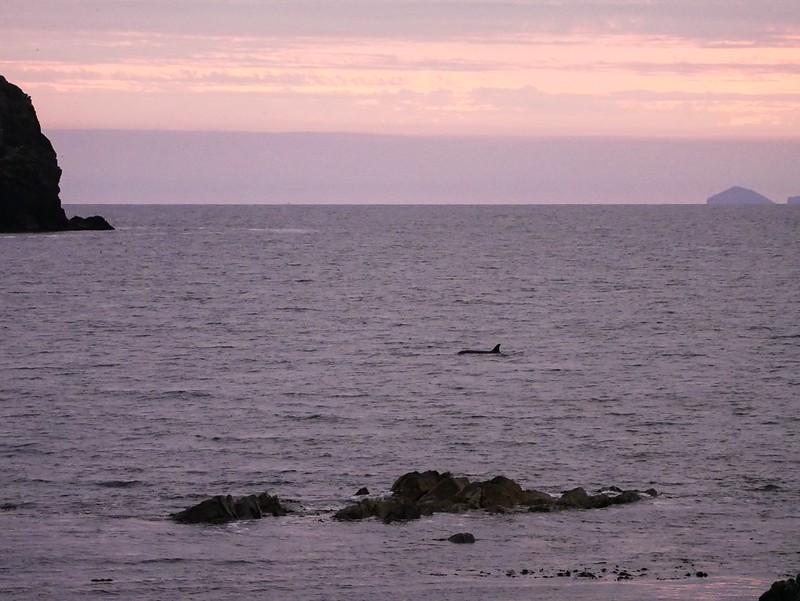 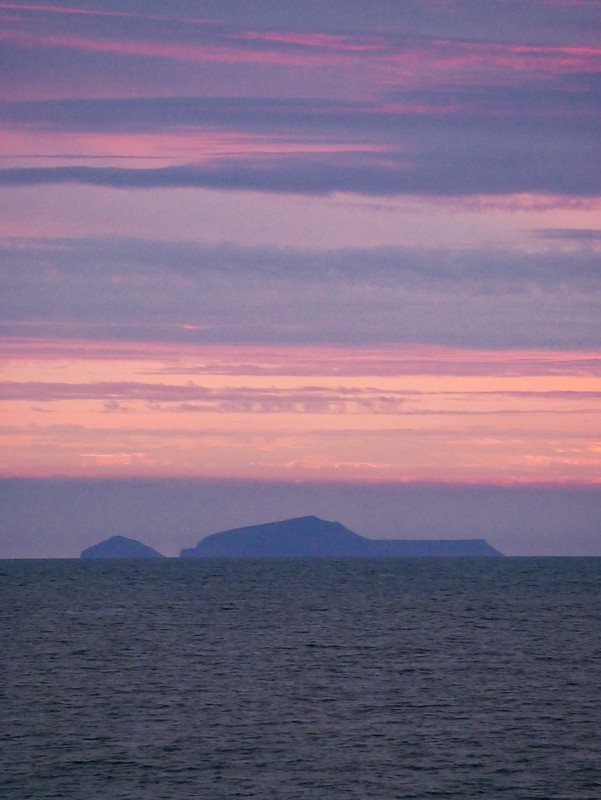