We were up at 8am, looking for otters along the shoreline when a message popped up on my phone “orcas, close to shore, heading south”

They were about 40km south of us and we had to decide if it was worth the drive. That sounds a bit odd, of course it’s worth driving to see orcas, but there’s been a few sightings this past month where they’re seen by one person and then they just vanish. So when the second and third replies came through with more locations sighted on our map we decided to head off without a coffee or breakfast – unheard of for us.

We had to do a quick refuel in Lerwick just incase the only gas station in the south of the island was closed and then we were zooming south. One great thing about Shetland is the main roads are quiet and fast, the downfall is parking, especially when orcas are around. Sometimes there’s just one or two places to park for a beach or coast hike and word had clearly got out about the orcas as we had quite a few cars behind us. We had a rough idea of how fast they were travelling thanks to people’s notifications and we were lucky that they were swimming along a stretch of coastline with numerous villages.

So with them around the cliffs of Levenwick we decided to go to an area called Troswick, about 5km south of where they were last spotted. It was a bit of a risky area to see them as the road didn’t go down to the coast, so we were hoping to park up and hike down. Parking being the problem, we ended up on a road that led to a little farm house with a border collie barking aggressively at Helga. It was horrible trying to not run over the damn thing. We couldn’t park there as it was clearly private land but as we went to turn around two more cars came in behind us. It was more people trying to see the orcas and they turned around and headed off. We quickly realised they would take any odd space there might be along the road so this farmers drive might be our only option. There wasn’t anyone around to ask if it was ok to park for 10 minutes so we just risked it. We stepped over a low wire fence and ran for our lives towards the sea. There was a sort of rocky bay with cliffs on either side of us but we were standing on slabs of rock that sloped right down into the sea. We couldn’t decide where the best place to wait was so we just headed to the end of the rocks and as close to the water as possible.

We waited in anticipation for about ten minutes and suddenly I spotted the first orca coming around the headland. I was a mess straight away, shaking with excitement and adrenaline while crying and squealing with pure joy. More and more orcas appeared from around the headland and to our absolute surprise they started swimming right towards us! Then they went underwater and for a few seconds I was scanning the sea “where are they? Can you see them?” And then their black dorsal fins pierced through the water just a few meters away from us!! Oh my god. We couldn’t believe it. We’ve seen orcas around the world but this was by far the closest we’d ever been to them. Craig was a little further right to me and standing beside a little inlet just a couple of meters wide, and a few of the Orca’s swam in, right next to him and then reversed back out. They were hunting right in front of us, swimming in circles with their black fins popping up, trying to kill seals which were abundant in this bay. 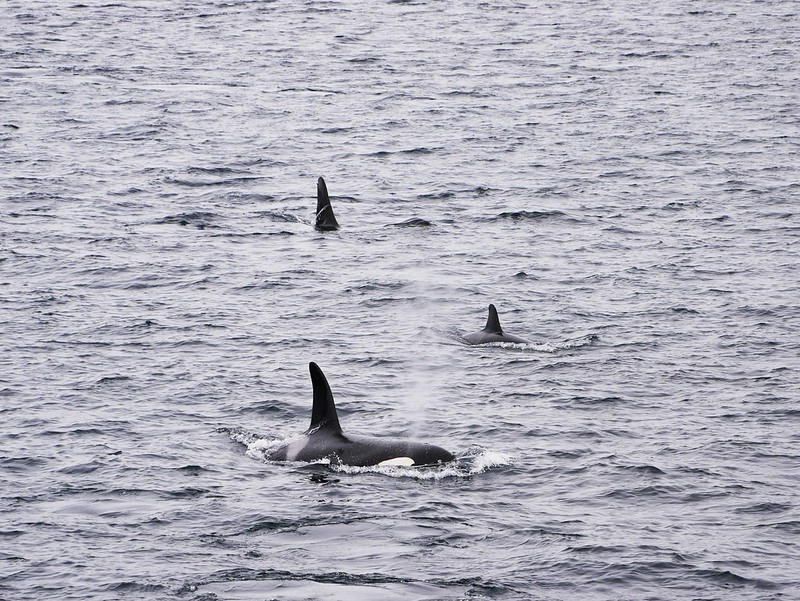 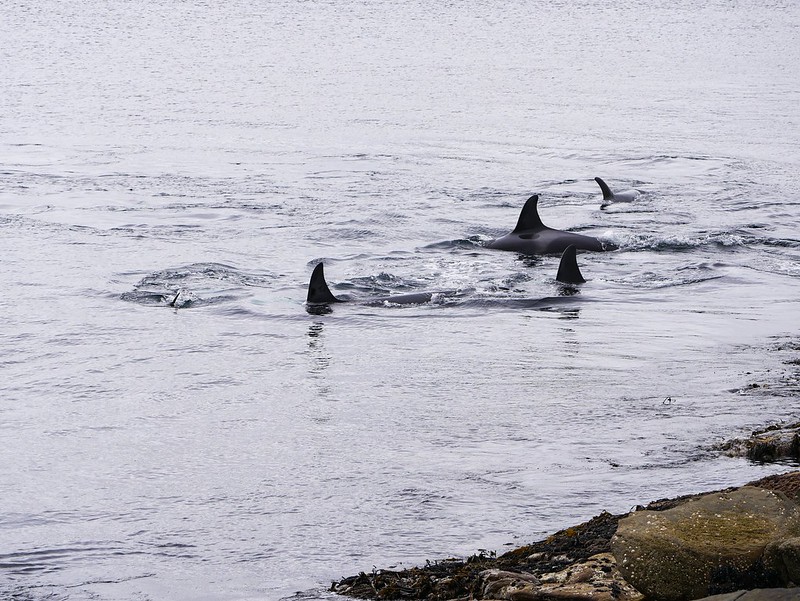 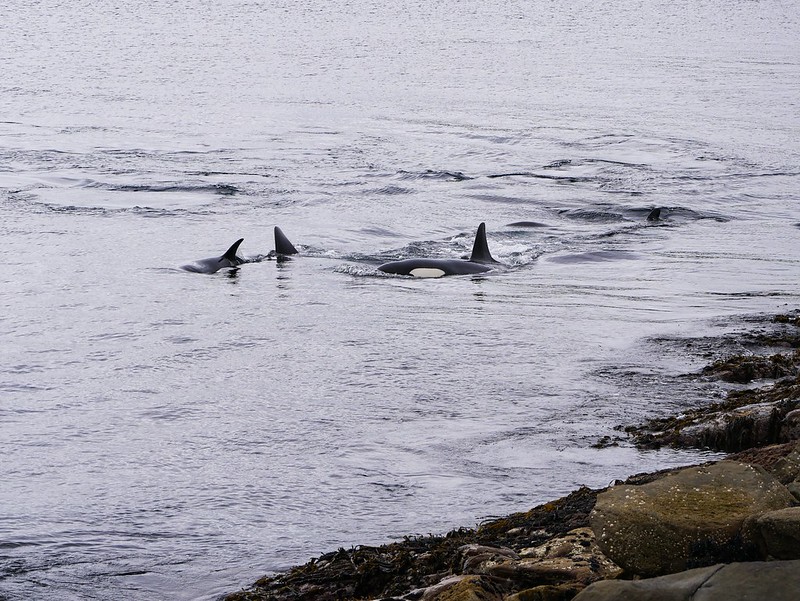 We were surprised to see so many orcas, we think there were around 11 of them, and we later found out it was the 27s and the 64s. Each orca can be individually identified from the saddle patch on its back, the shape of its white eye patch and any scars or deformities on their body or fin. The pods consist of the matriarch who’s the oldest mum, and all of her kids and grandkids. They stay with her for life, it’s a remarkable bond. The males will swim off to other pods occasionally to procreate and then return back to his mums pod. The males don’t bring up their own kids, instead they help bring up their niece and nephews in their family pod. Anyway, while each orca is allocated a number to identify it with, the pod is named after the number of the matriarch. So this was the 27s and the 64s together, and a local who’s lived here 40 years told us it’s the first time he’s seen the two pods together! 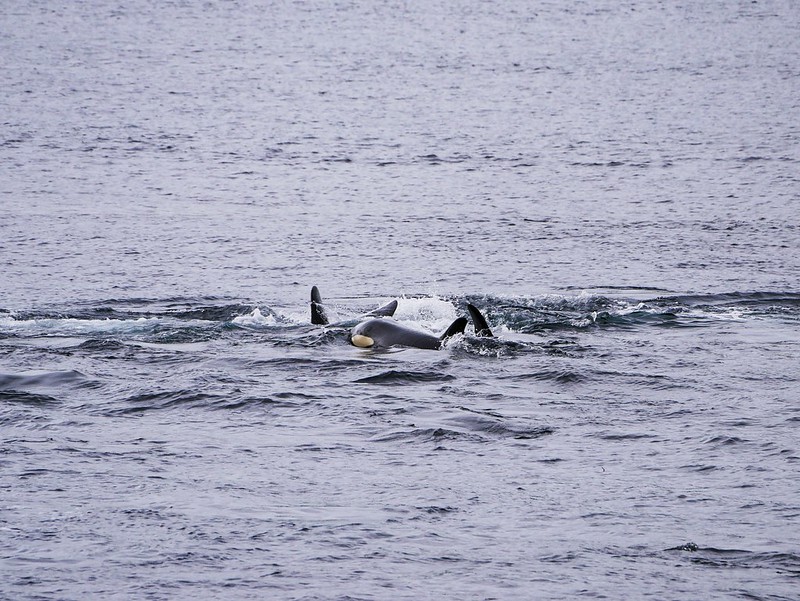 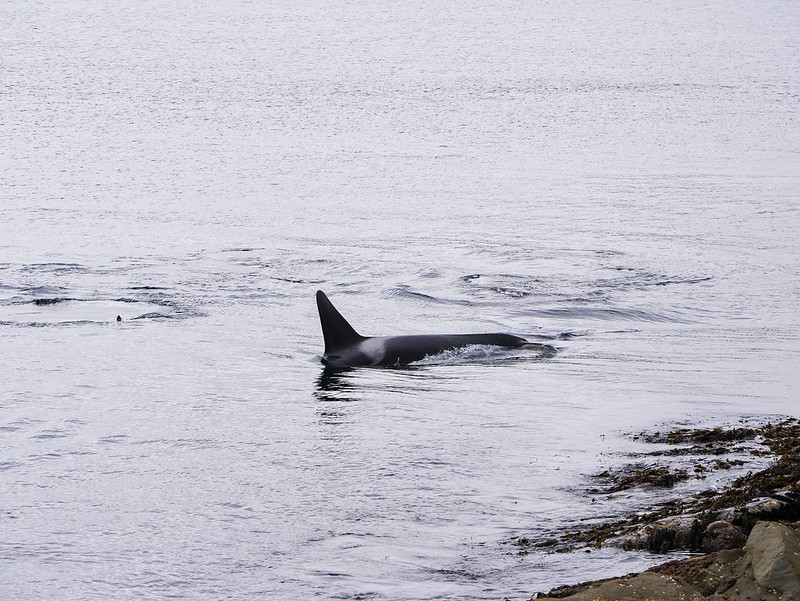 The encounter was unbelievably close but it also happened quite quickly, we can’t run alongside them on the cliffs as their just too fast so instead we ran back to Helga so we could drive south again. We were absolutely over the moon with happiness!! The only thing that could possibly ground me back to earth was the electric shock I got on my butt from the low fence we stepped over.

We quickly turned around and drove off, getting attacked once again by the border collie. After driving about 10 meters down the road the dog reappeared, practically jumping up to our window!! We ended up on a section of road lined with about 15 cars on a grass verge looking across the inlet. The orcas were visible but quite far out and they were making their way south still so we continued driving. We went quite a chunk down, all the way to the harbour at Grutness where the carpark was almost full. We walked to the end of the headland and after about 15 minutes they appeared ahead of us coming into this large bay. It took a while for them to come across to us and by the time they did it was drizzling with rain which made photography quite tricky. They passed quite close to the land and then we ran across the headland to see them on the other side. A few of them were hunting right by a rock wall – it really amazed us how close they get to the shoreline. Then they made their way south to the very tip of Shetland mainland at Sumburgh Head. 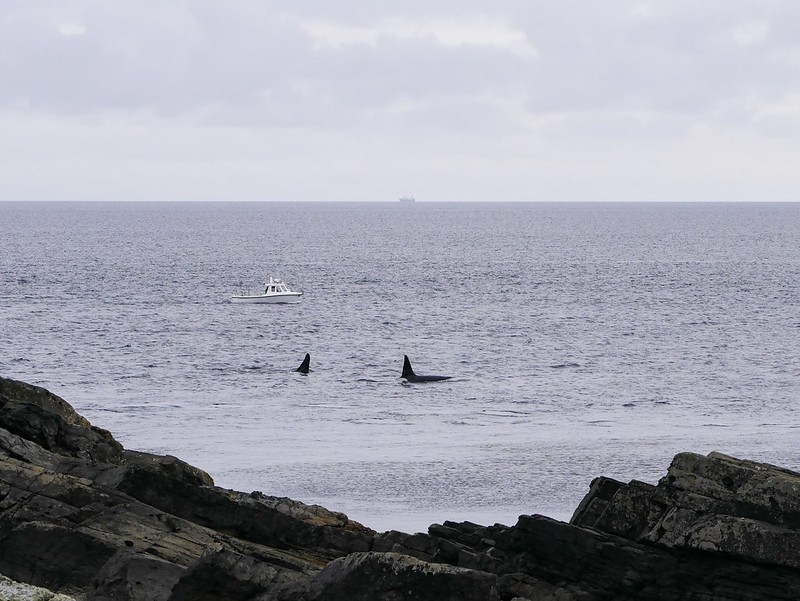 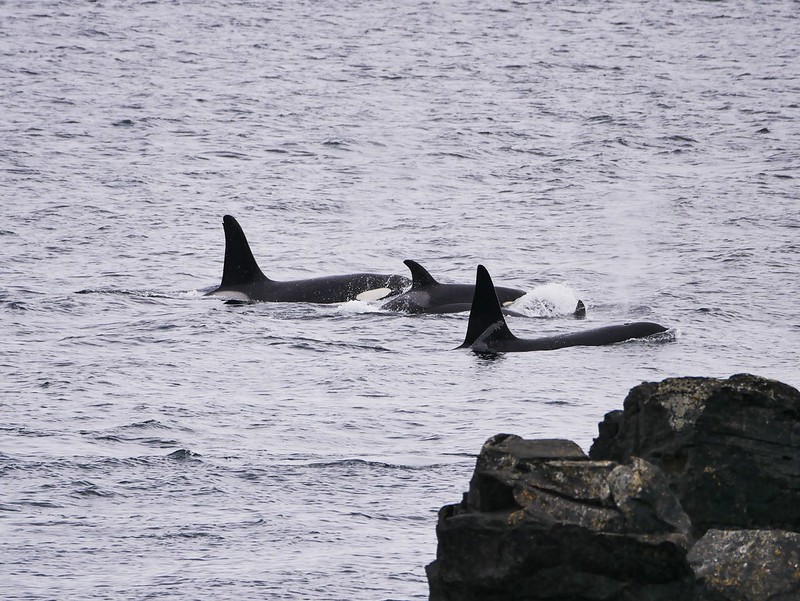 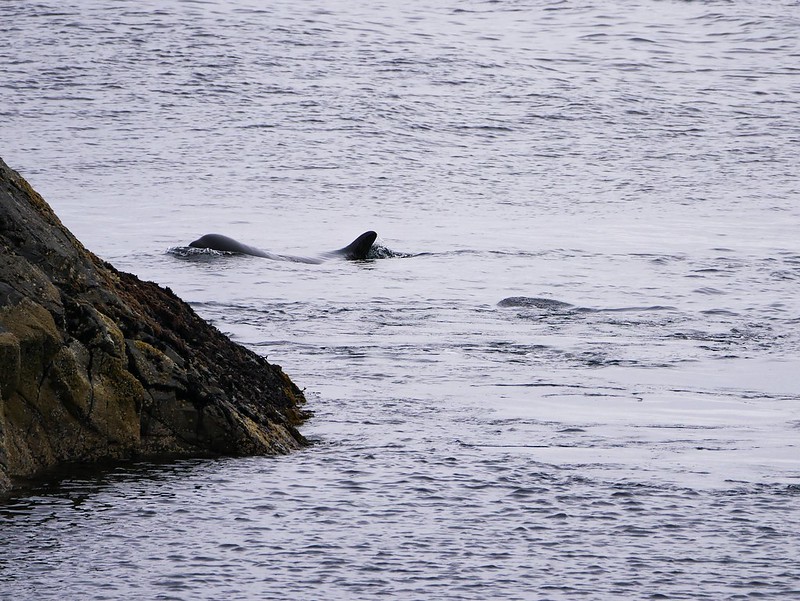 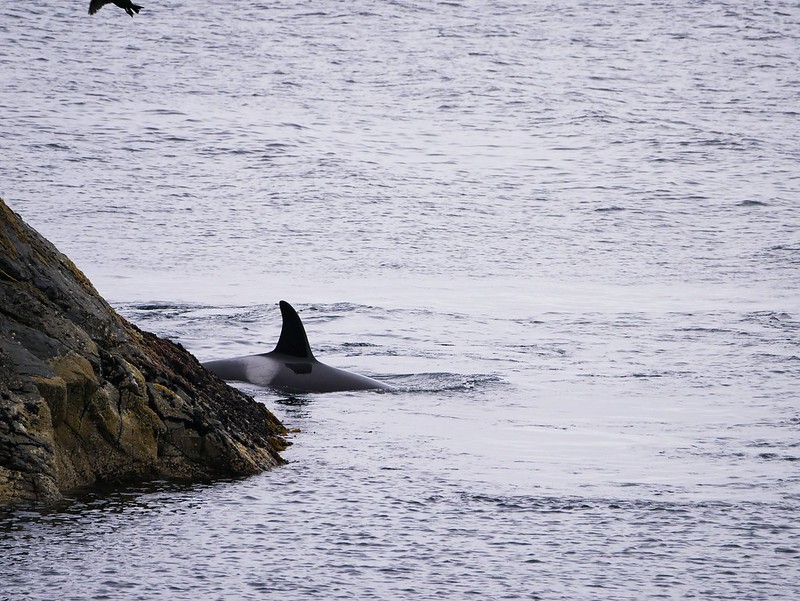 We didn’t know if they would continue following the coastline, making their way north up the west coast or if they’d head out into the open ocean and vanish from our sight. We didn’t go to Sumburgh as we knew it would be too busy to park now, but we checked our phones and had some good news – they were heading north! We waited in a lay-by and saw them at quite a distance, swimming around a seal infested island.

From this point there was a large area of the coast without any roads or access points so we had to head quite far north. A stretch of road had a few cars pulled up, the people inside were staring across the sea with their binoculars so we stopped to have a look. There was a gorgeous beach below us with about 15 seals lounging on the sand so we figured it was a great spot to see the orcas as it was like food on a plate for them. It took about 30 minutes but eventually Craig spotted them and announced it to everyone…and then they vanished and I was a bit embarrassed that Craig might’ve mistaken a wave or seal for an orca. But I have to remember that Craig has eagle eyes and was not mistaken, they were swimming around the headland but they didn’t come into the bay and kept quite a distance out. This meant another drive north for us. But before we stopped we had to eat something. It was 2:30pm and we still hadn’t had breakfast or a coffee!! I was feeling quite headachy actually so we pulled up and made a quick fry up. 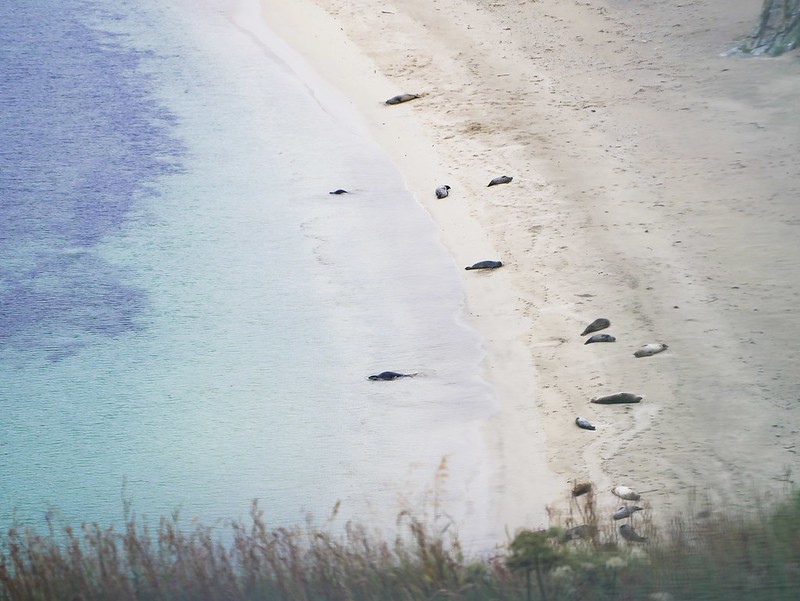 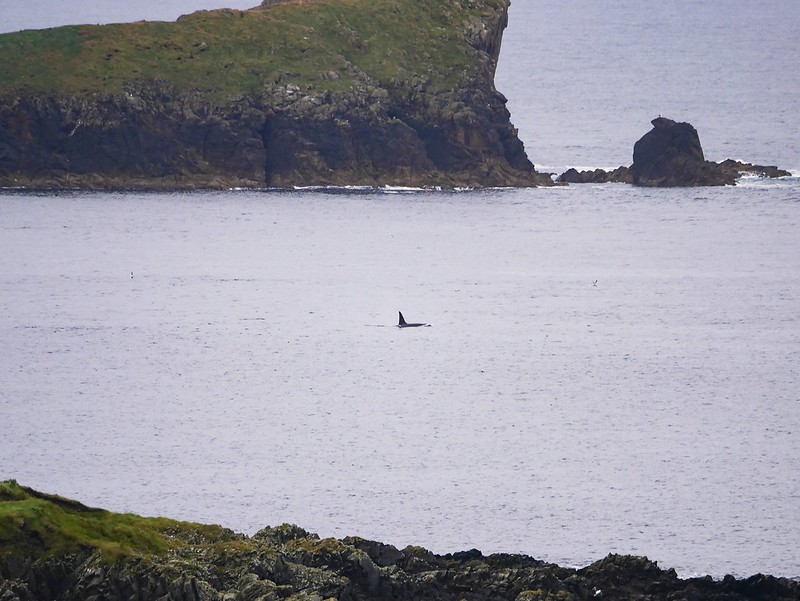 Then it was time to pick a location further up the coast. We opted for a tiny village by the sea called Maywick while everyone else went to the popular beach tombolo of St Ninian’s. Two ever so friendly border collies (what a contrast to this morning!) came to say hello to us as we got out our van. We walked down the track and happened to meet the dogs owner so we asked if it was ok to access the cliffs from the back of his land and he was more than happy for us to. When we told him we were going up there to see orcas he looked disappointed and seemed to feel bad for the seals. We’ve met a few people like this who feel bad for the seals, it’s all part of nature and the food chain. There’s plenty of seals around and some of the worlds orca populations are going extinct so we are 100% team orca.

So anyway, we ran up the hill and had the big decision of which headland to wait on. We came prepared this time with tea and banana bread while we patiently waited for them. Like clockwork their black fins pierced the sea as they ventured our way. The pod was quite separated at this point, the two bulls swam together and then a bit further back a mum and calf came our way, followed by the others. We were pretty high up on the cliffs but it was amazing seeing them swimming below us. We could see them swim upside down as a big patch of white from their belly would be visible under the water. 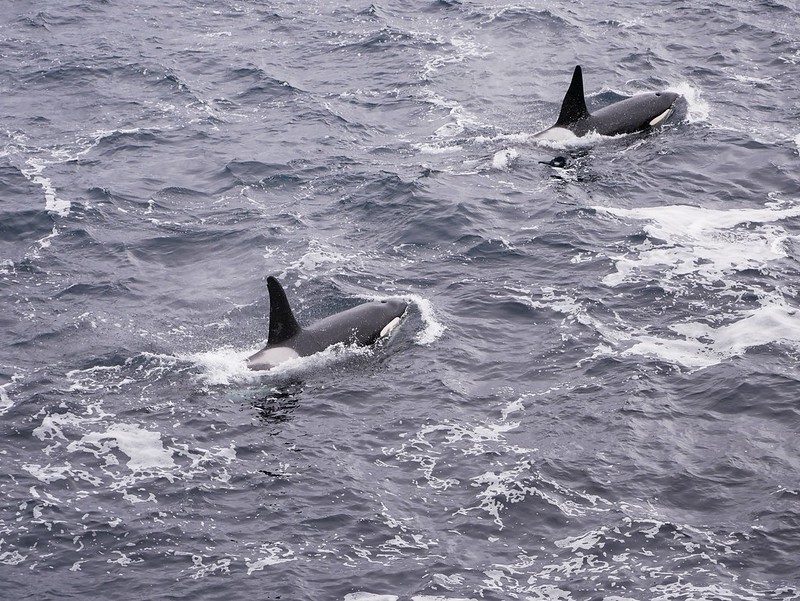 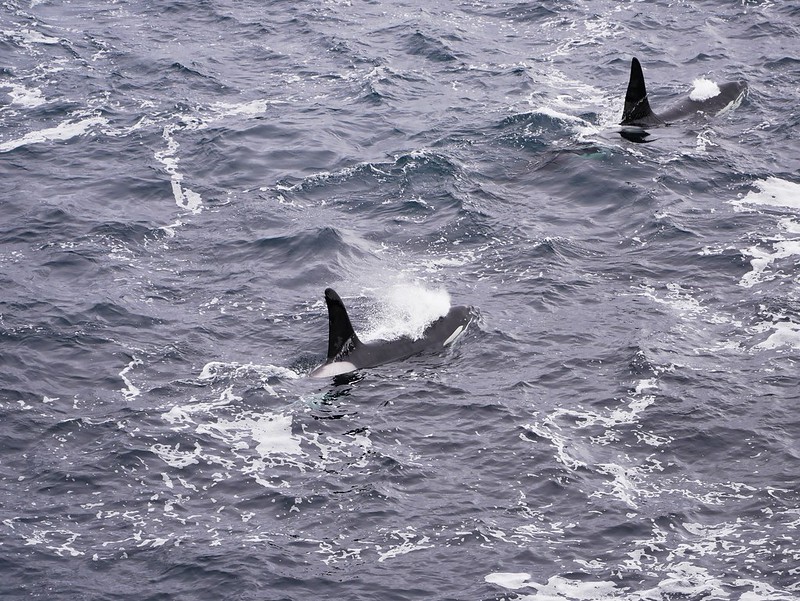 The next possible chance of seeing them was quite a distance away in West Burra but we didn’t hesitate in driving there. Ironically we arrived at around 7pm and realised it was a bit silly to do such a long drive as we needed to make some dinner and already the light conditions weren’t great…and it was raining! We later found out that while we were eating our dinner the orcas had swam right past us! What a day though, it was hard to sleep at night as my body was still buzzing with adrenaline and my mind racing with all the excitement of the day. 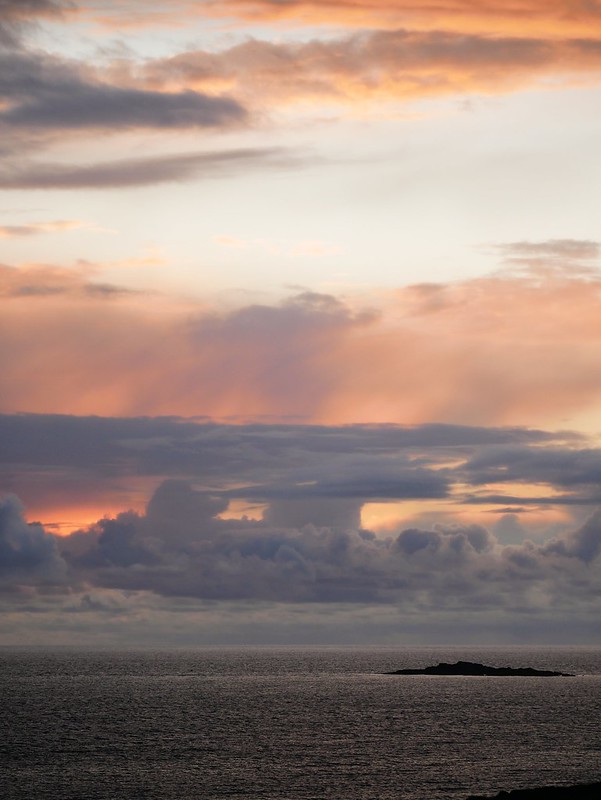