When we arrived in Shetland almost a month ago a local told us it had been cloudy for three weeks solid. Well, that weather pattern continued for us, with just a couple days where the sun made an appearance for a few hours. But today we woke to our first morning of sunshine, what a treat! We couldn’t of been in a better place for it as we were based on the small island of West Burra, connected to mainland Shetland by a couple of bridges. West Burra is home to two stunning beaches; Meal and Banna Minn. Shetland isn’t short on spectacular beaches but we haven’t been able to see them in the sun and every time I comment “imagine how good it would look if the sun was out”. So first thing in the morning we ran straight down to Meal Beach. It was a perfect beach that could of been mistaken for one in the Caribbean or Asia. The water was turquoise, dropping into a deep, dark blue and the sand was as white as snow. We took a few photos and decided while the sun was out we’d take a spin down to Banna Minn beach to see it in sunshine too. 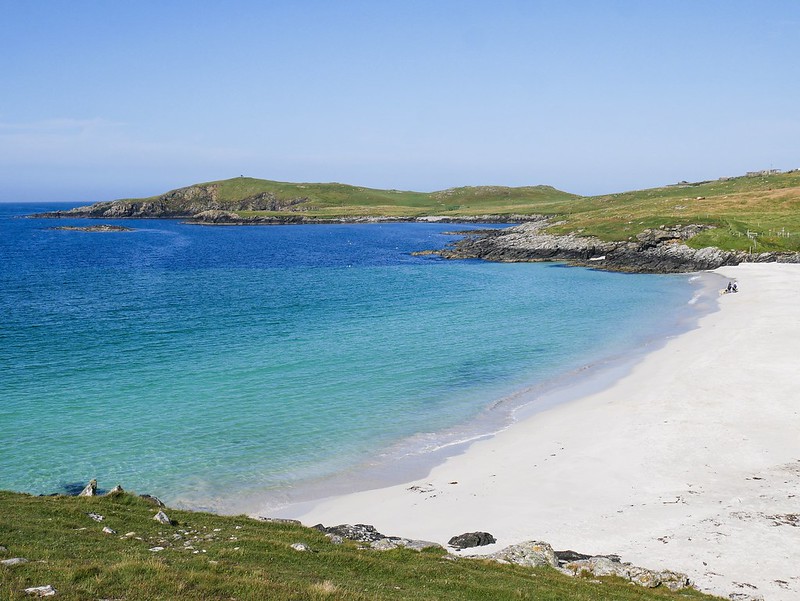 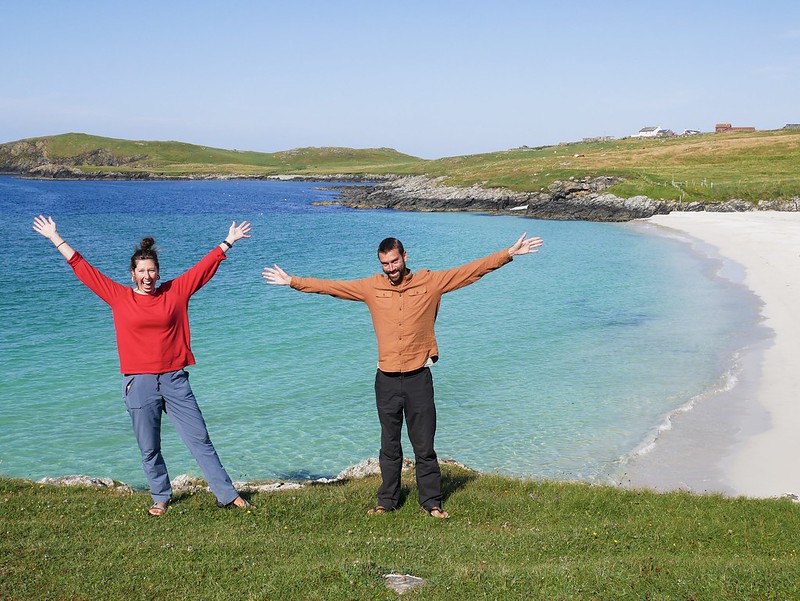 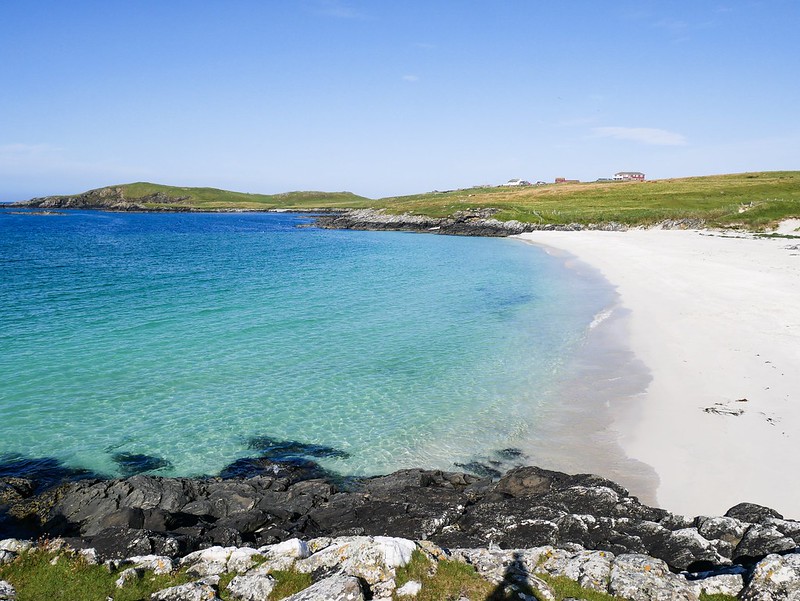 Banna Minn was the second tombolo beach we’ve visited on Shetland, which basically means its a double beach, looking like a sand bank or causeway and it led across to the little island of Minn. The beach was set in a large, curved bay and to be honest the first section wasn’t that impressive, the sea was very patchy with seaweed and rocks underneath, but the further we walked the better it got. It was comparably to the beaches we witnessed in the Maldives!! And while many of the Shetland beaches have tropical looking turquoise water, this one was aqua blue. It was so clear and twinkly in the sun, in fact we decided it was so nice that we’d have to go for a swim after our hike around Minn Island. 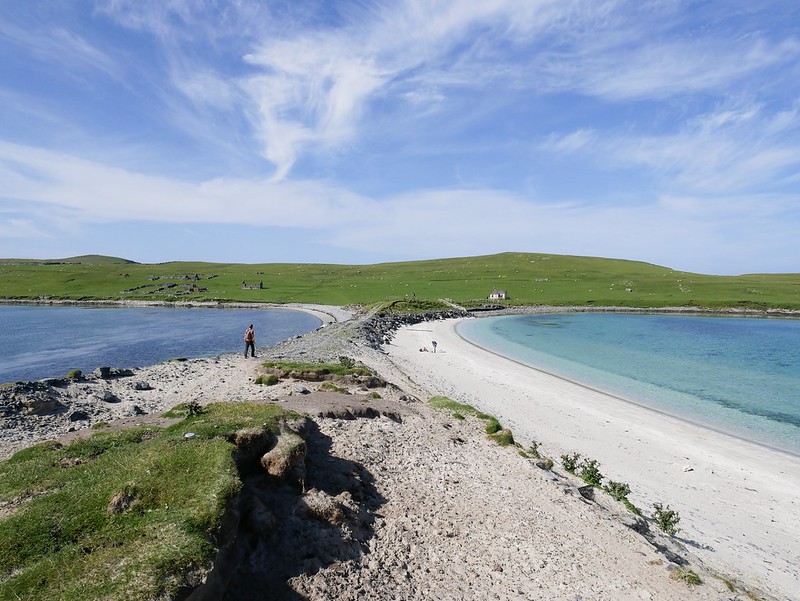 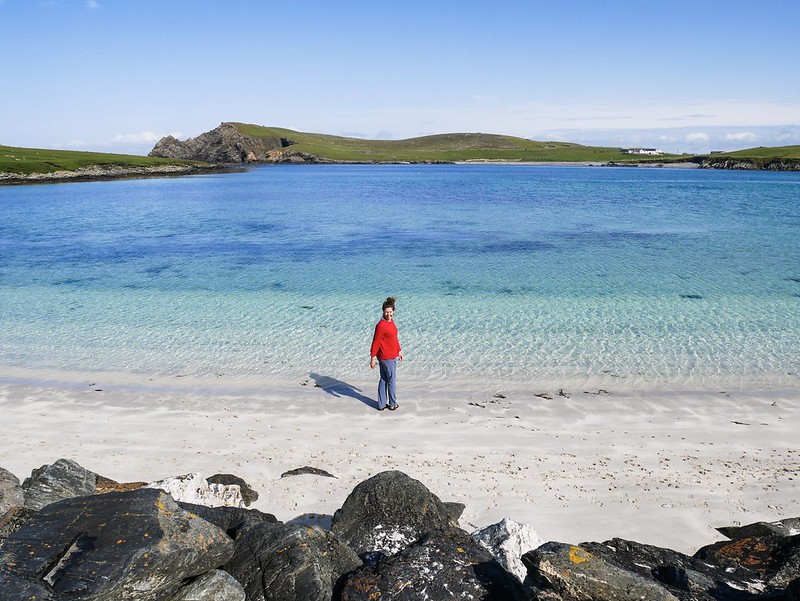 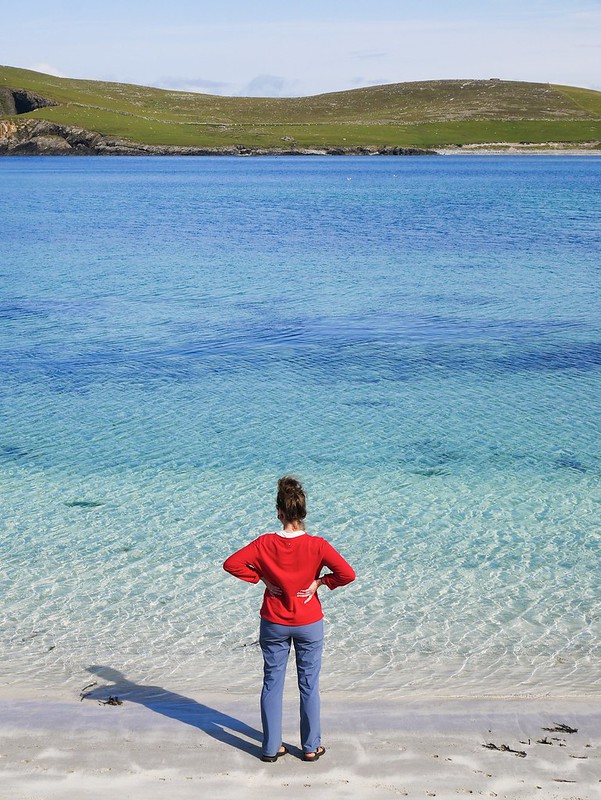 Before we could tear ourselves away from the shore, a cat appeared on the beach. Considering I don’t normally like cats as they tend to scratch or bite me, I was particularly fond of this ginger and white one. She was so friendly and loved the attention. I later found out that her name is Buttons and she’s 16 years old. She’s not homeless and she has a loving owner who lives on a hill above the beach, but she chooses to spend the summer outside, hunting for rabbits and socialising with people. When the temperature drops she heads back home and snuggles up near the fire, what a bloody legend of a cat. 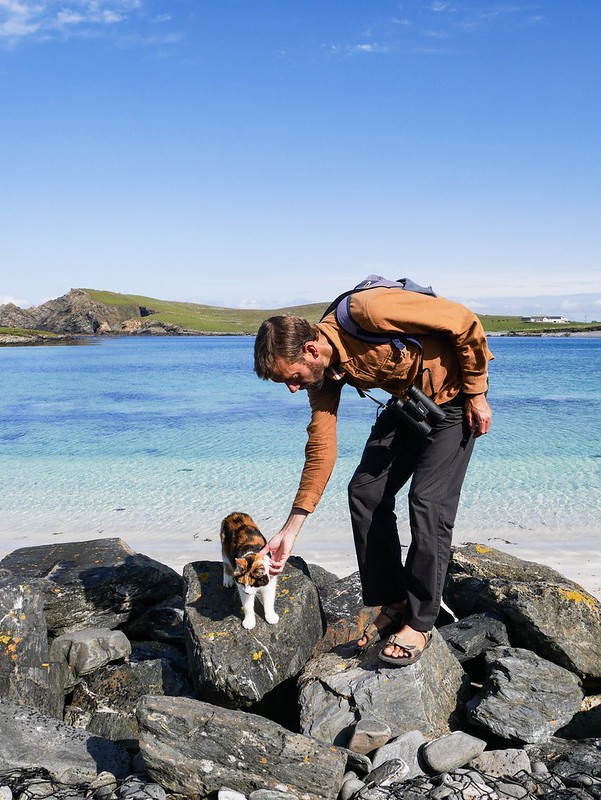 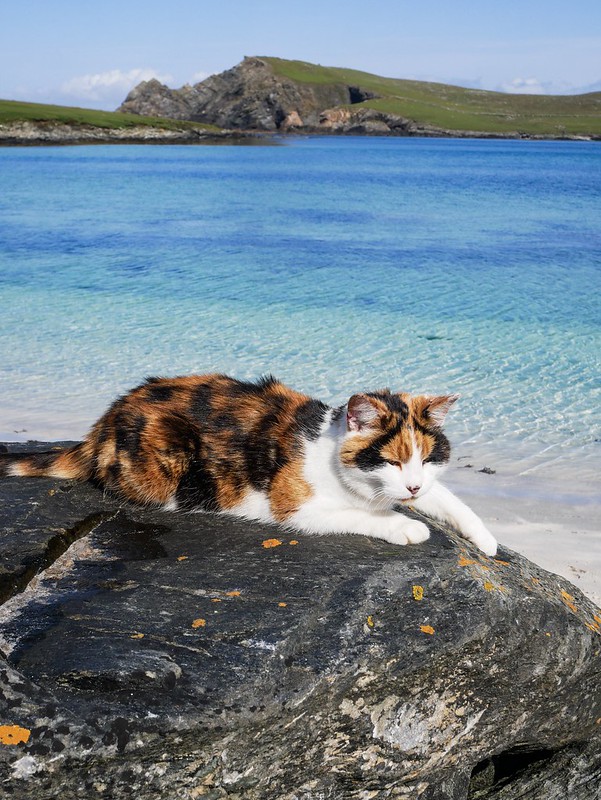 We finally commenced our walk, passing more gorgeous coloured water along the shores until we began climbing up some cliffs. We had views across the tombolo and to the steep hills on the mainland which had clouds drifting along the peaks. It looked quite like Norway actually, with the clear water, mountains (teeny tiny ones mind you) and the drifting clouds. 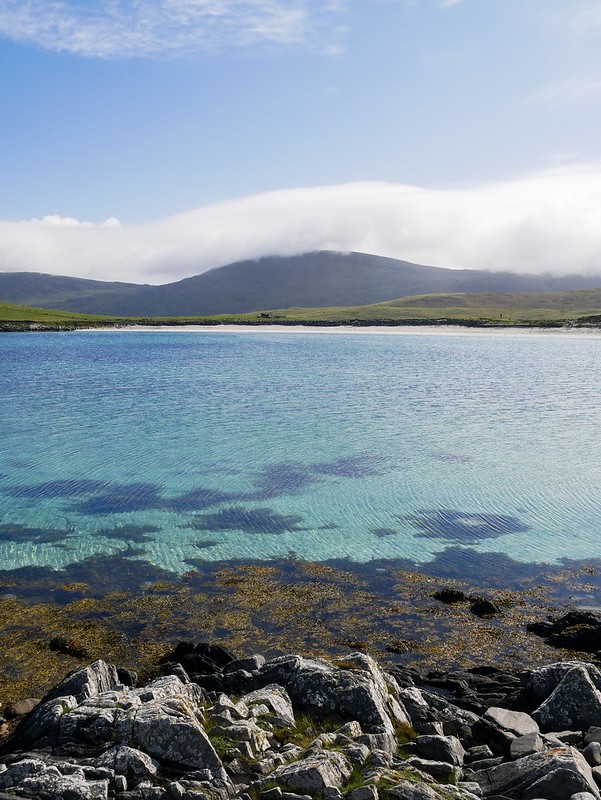 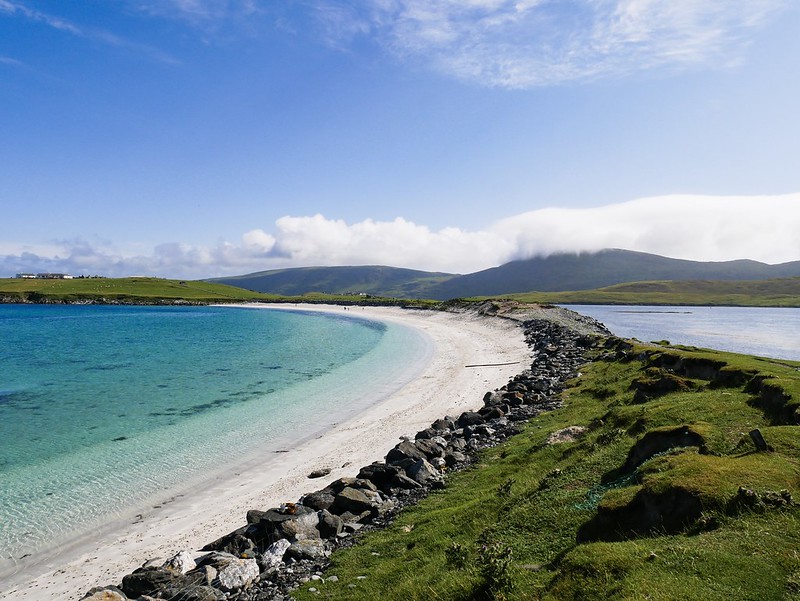 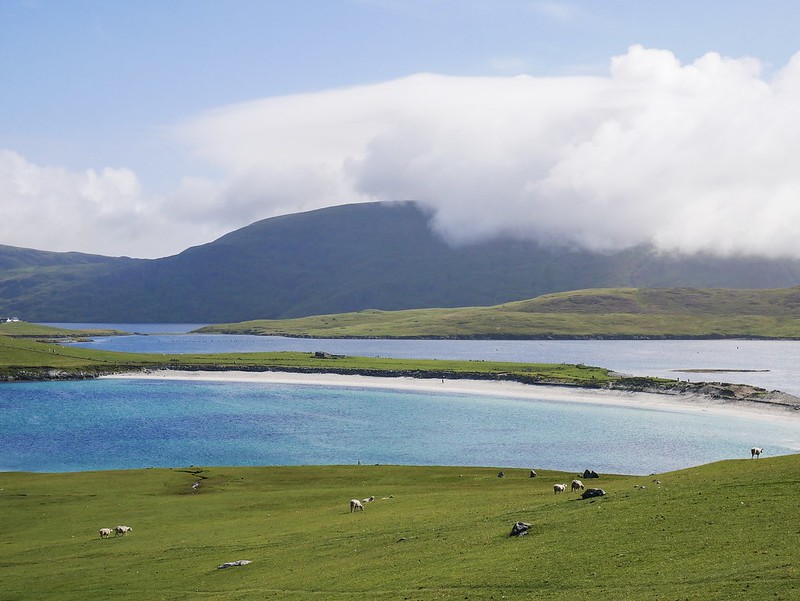 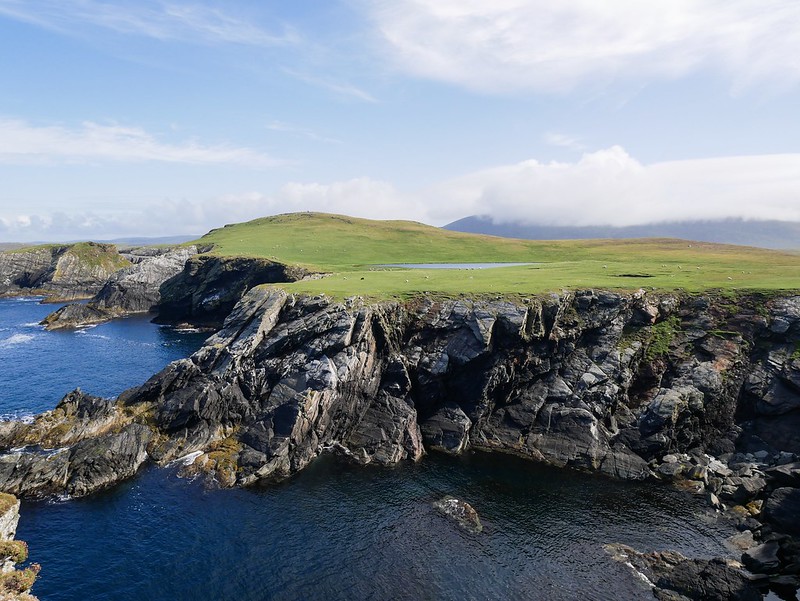 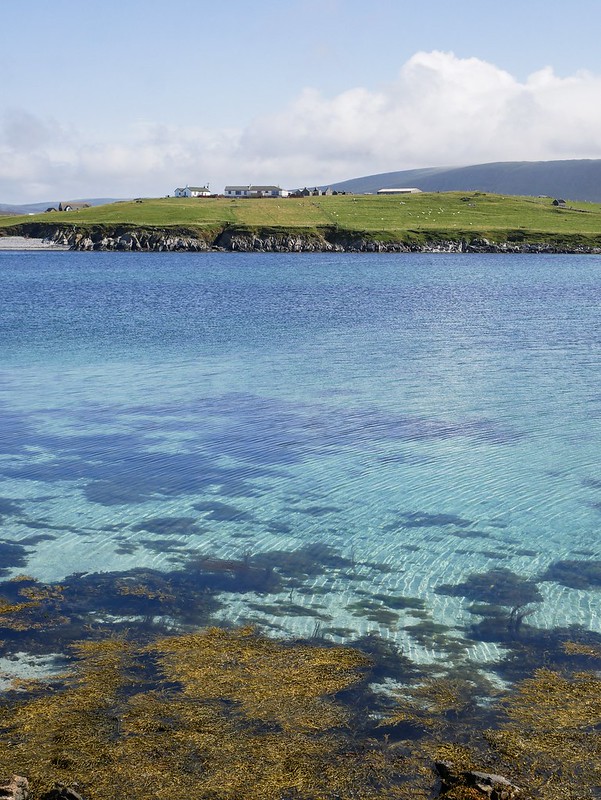 We enjoyed our little ramble along the coast and after an hour or so we were back at the beach, plucking up the courage to get into the frigid water. It’s August now so the water is at its warmest, a whopping 13° apparently. It was bitterly cold but I gradually got used to it and after being determined not to get my hair wet I gave up and decided to have some fun. We were both running and jumping into the sea and having an absolute blast, suddenly the water didn’t feel cold anymore and we spent quite a long time in it. 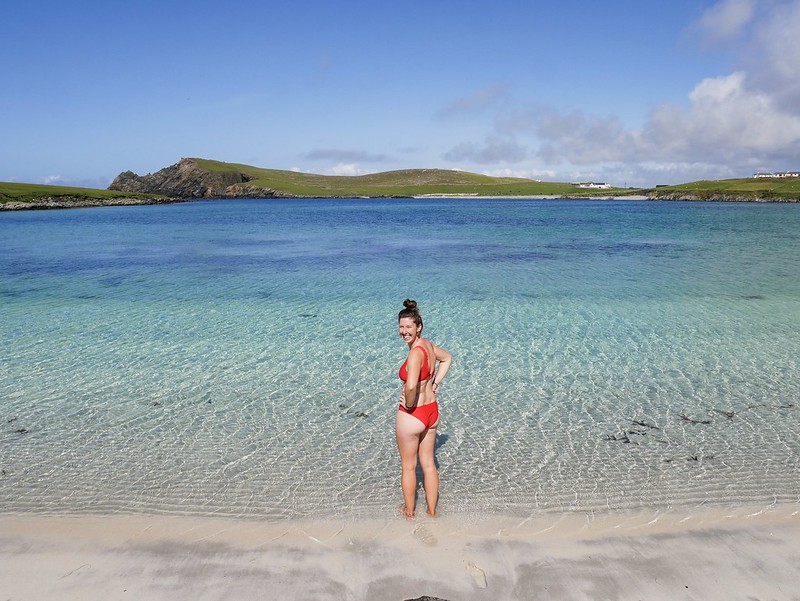 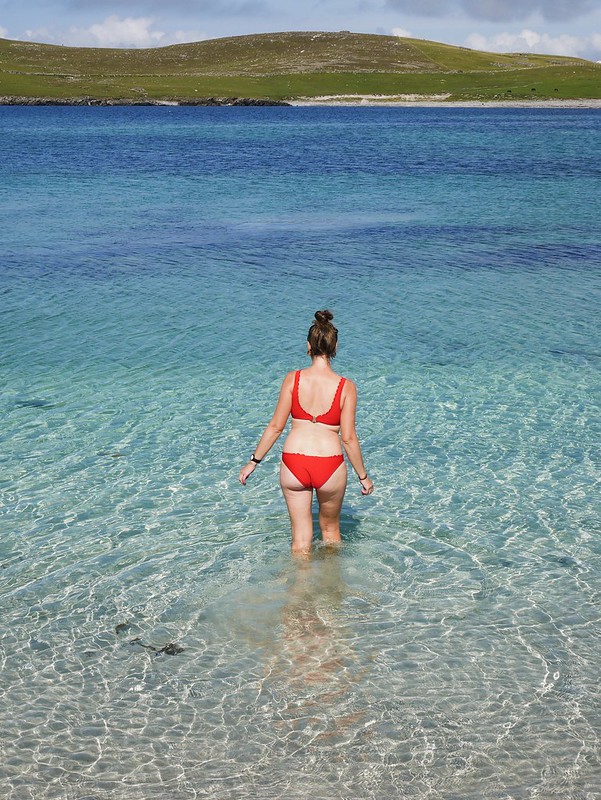 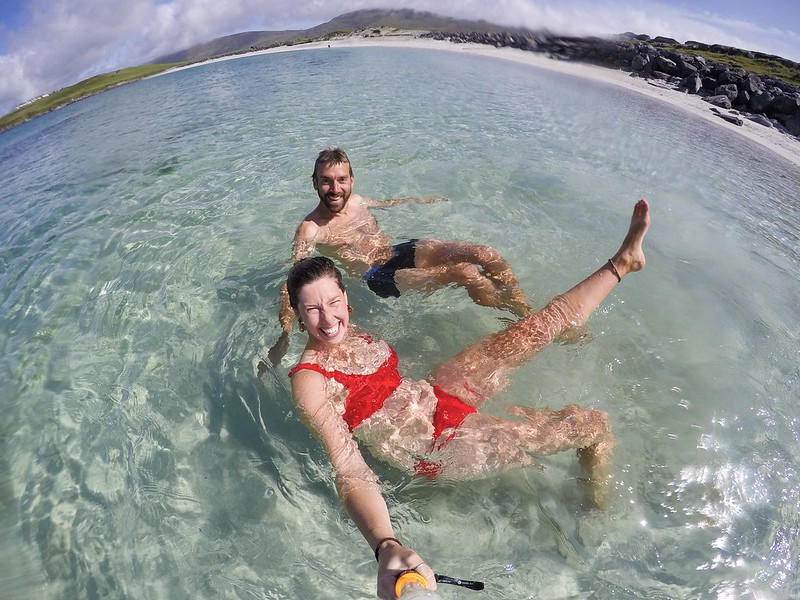 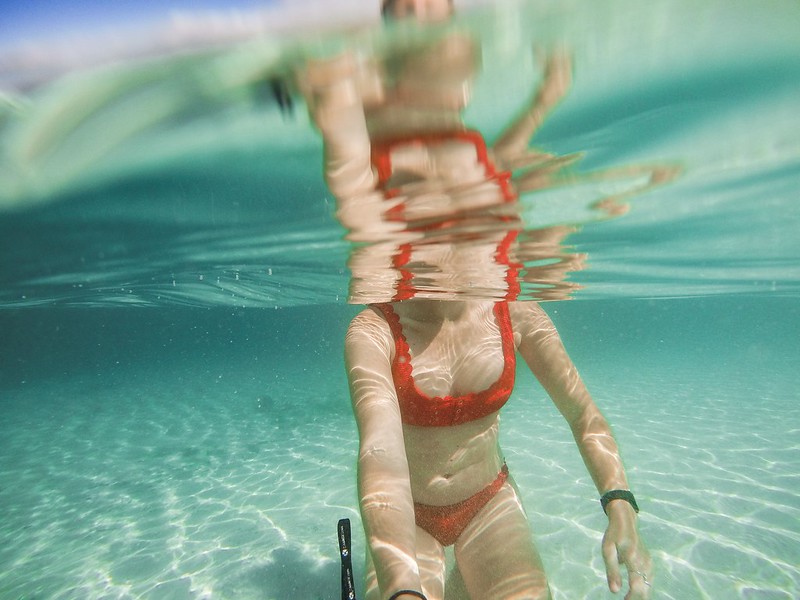 We felt like we’d seen everything we wanted to see in Shetland now, except the orcas of course, who vanished for our entire month so we figured it just wasn’t meant to be. We booked onto the ferry to the Orkney Islands and had a couple day’s before it departed so after a stop at Lerwick to buy some food we opted to head a little north to Ling Ness, an area we’d visited when we first arrived in Shetland. It had a very remote feeling to it a month ago, yet today it felt quite different. There were quite a few cars parked up, some even in passing places and we could see a few folks walking down to the beach. How bizarre! One of the main reasons we came here was to try and see some more otters but with all the people around we didn’t expect to see any, so our other option was to go for a coastal hike and possible swim. The sun was teasing us, popping out between cloudy patches but we soon realised that if we wanted a swim we had to do it now or we wouldn’t have the courage if it totally clouded over. The beach was a typical Shetland one, with white sand and turquoise water and this one was nestled in a bay which was protected from the wind. A big black cloud loomed above us as we jumped into the freezing cold water. It looked amazing though, just like the photos I took in the Maldives – a tropical beach in the sun with a menacing storm approaching. There was a seal in the water not far from me and I waded out a little further to try and encourage him to say hi but he wasn’t interested. 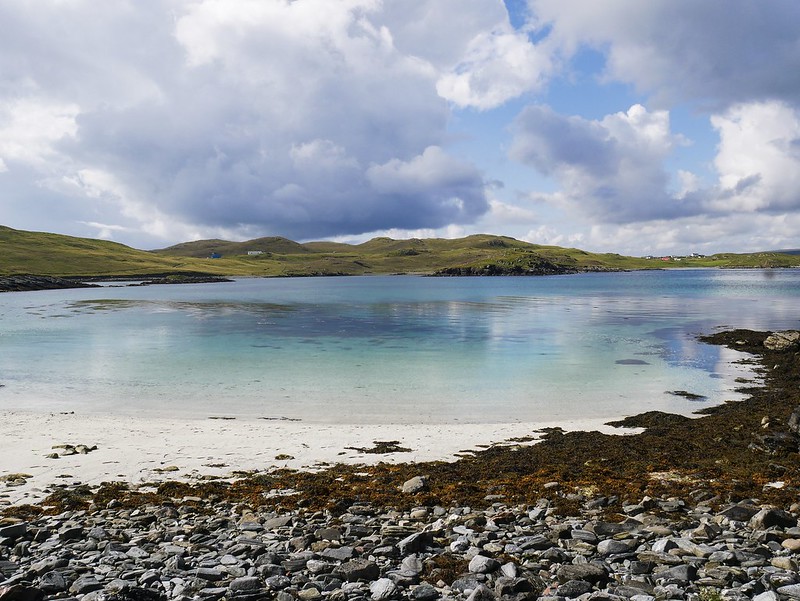 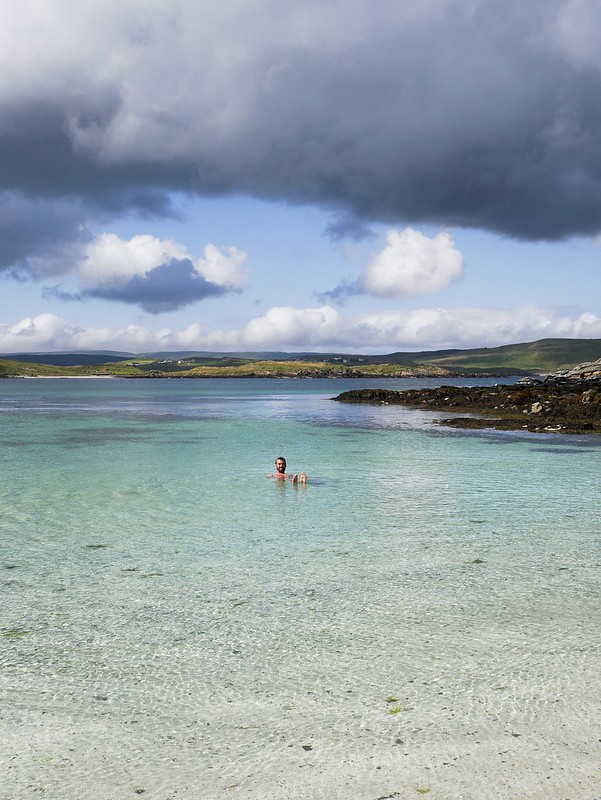 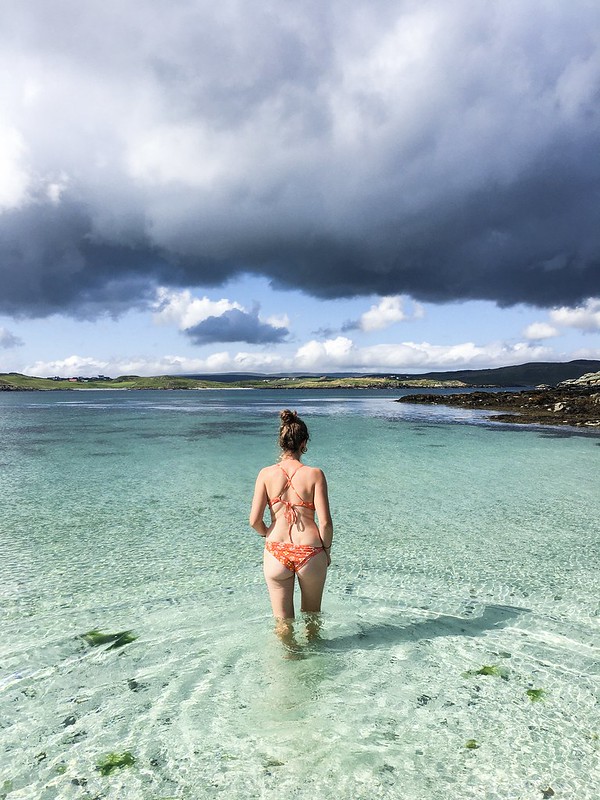 After our refreshing dip we walked along the coastline, passing numerous other beaches and areas with emerald coloured water and swaying kelp forest. That evening we managed to see some otters at last. They didn’t come out till just before sunset so I wasn’t able to get any good photos, but they were a delight to watch as always. One seemed to come out of the rocks beneath us so maybe that was it’s home, and then it proceeded to walk along the jetty while pooping all along it, I presume to leave his scent and warn other otters to back off. He swam onto an island and spent a while rolling around on his back and giving it a good rub. We decided to wake a little earlier tomorrow to try and see them again in better light. The early wake up call turned out to be quite a blessing, there weren’t any otters about, but rumour had it that the orcas were back on Shetland! 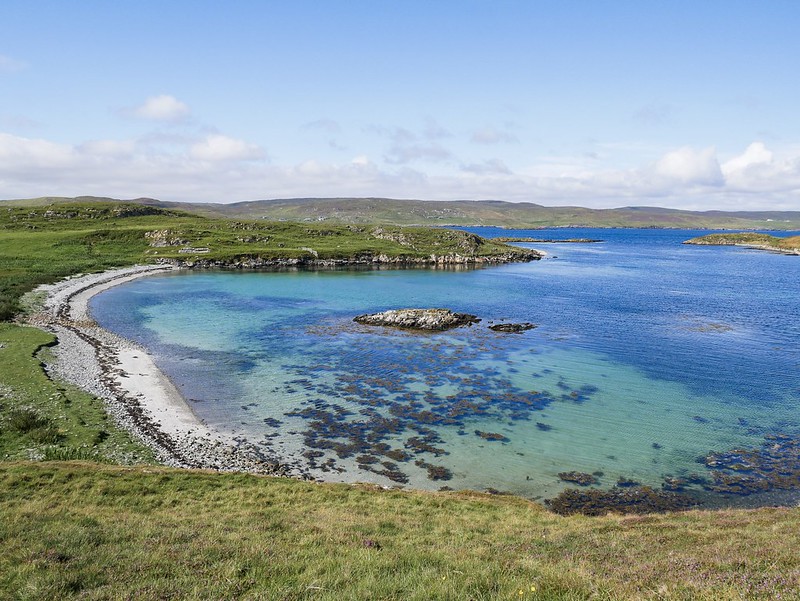 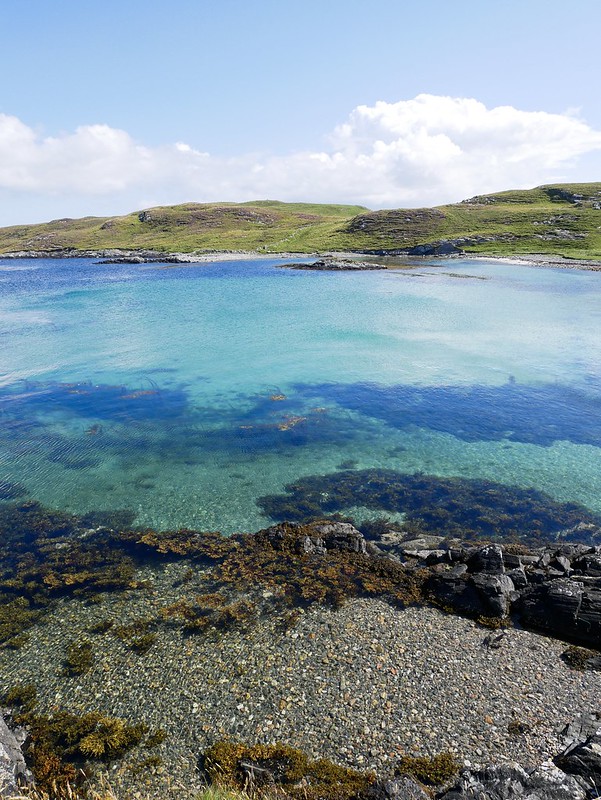 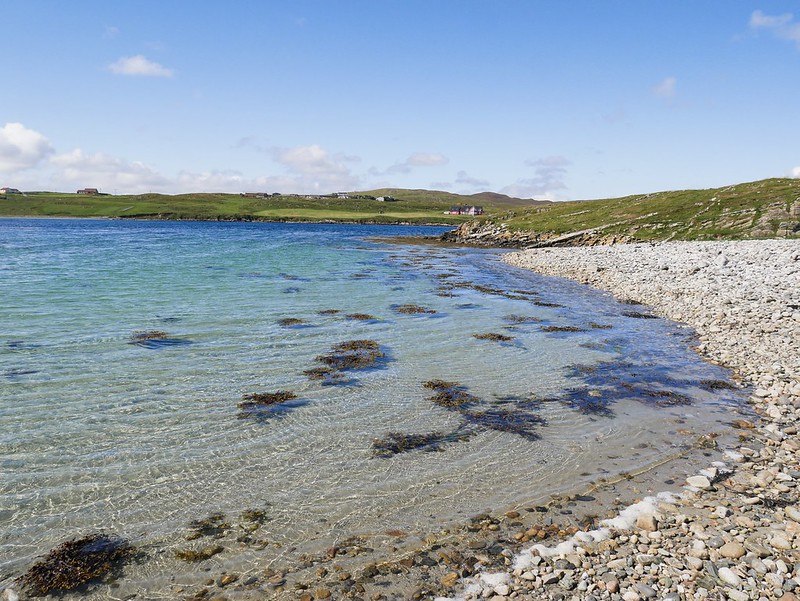 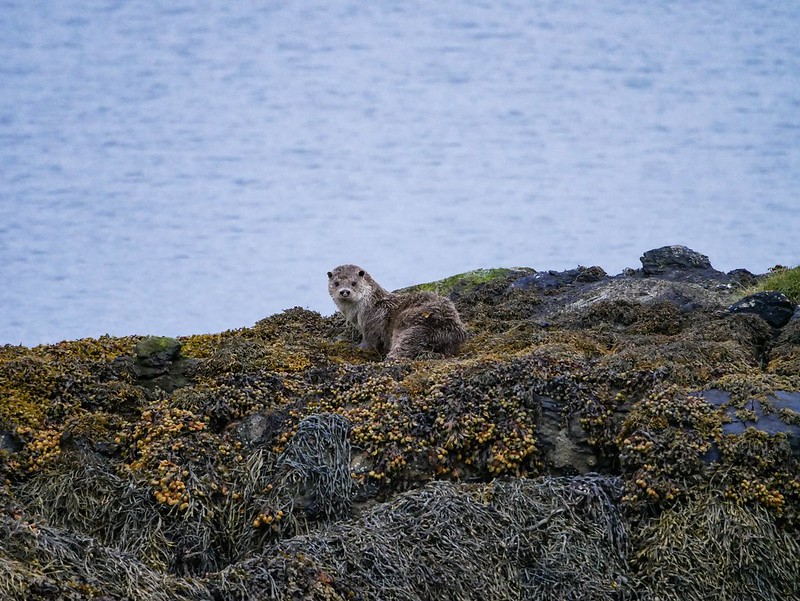