We’ve been dreading Helga’s MOT coming up as I’m sure everyone does with their vehicles, but this was the first one since we’ve owned her. For anyone who’s not familiar with an MOT it’s basically a safety check on a vehicle in the UK and it’s a legal requirement. We always get nervous around mechanics, especially on a roadtrip because we don’t know if we’ve just stepped into a garage which is known to rip people off. All we could do was search for a place online with good reviews and in a small town as we certainly didn’t want to be stuck in a city if she needed work doing.

Maryport in Cumbria ended up being the location of our chosen mechanic. Before we arrived we stopped in another town to get a tyre replaced, we’ve replaced the other three but this one desperately needed swapping as it was 11 years old and cracked to shit. We knew the tyre would fail so we tried to send out the most positive vibes to the universe, as if the tyre would be all we needed to fix.

Helga’s an old girl at 32 years and we watched as she was raised up in the air for a full check over, her poor little bonnet was left open and bouncing precariously. The mechanic came in half way through to answer the phone and he mentioned to us that our headlights probably needed fixing and I snorted and said “as long as that’s all we need to fix ha haaaaa!”

I was feeling sick with worry, even though we’d had a full check over when we first bought her this was a totally different mechanic. The chap came back into the room and input some information onto the computer before calling out “well you can continue on your roadtrip” oh my god. Helga the bloody legend passed!! All she had was two little advisories. We were over the bloody moon, what a relief!!

We were anticipating her needing a few issues fixed and having to wait for parts to be delivered so suddenly we were wondering where to go next. Our plan was Scotland but which route? I figured the best way to decide would be to see where the wildlife will be at what time of year and Orca’s popped up on my search. I read there was quite a good chance of seeing them in the Shetland Islands so after a little research we decided to go with this spontaneous decision and book a ticket on the ferry! Although it wasn’t quite that easy as they were full for a few weeks. Luckily a few days later I checked again and found a cancellation so we were able to bring the date forward.

We spent our final night in England along a lovely little coastal road. There were parking areas right by the beach with a beautiful view across the sea to Scotland. We attempted a walk on the vast sandy beach and ended up in a right mess as the sand turned to clay. Our flip flops got totally stuck and we had to pull them out with our hands and walk back barefoot. We were treated to a wonderful sunset with big sun beams piercing down to the sea and a view of the Scottish hills. 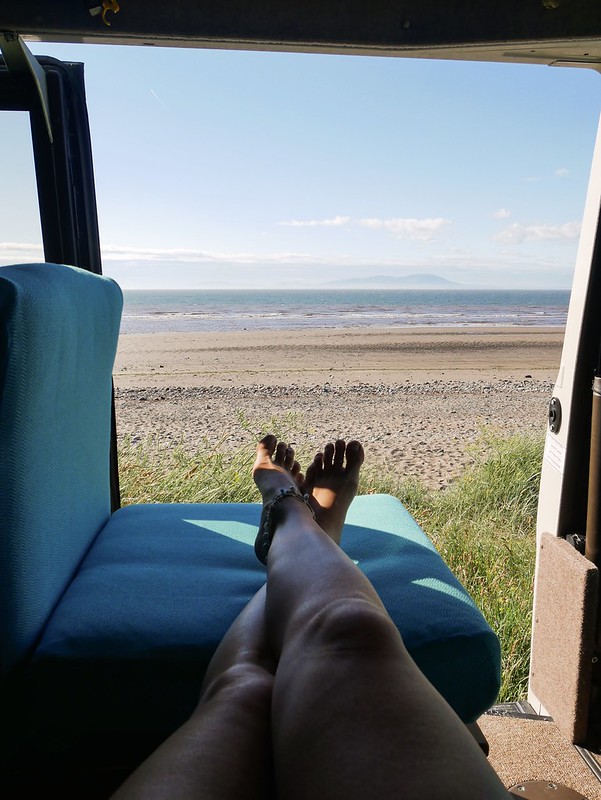 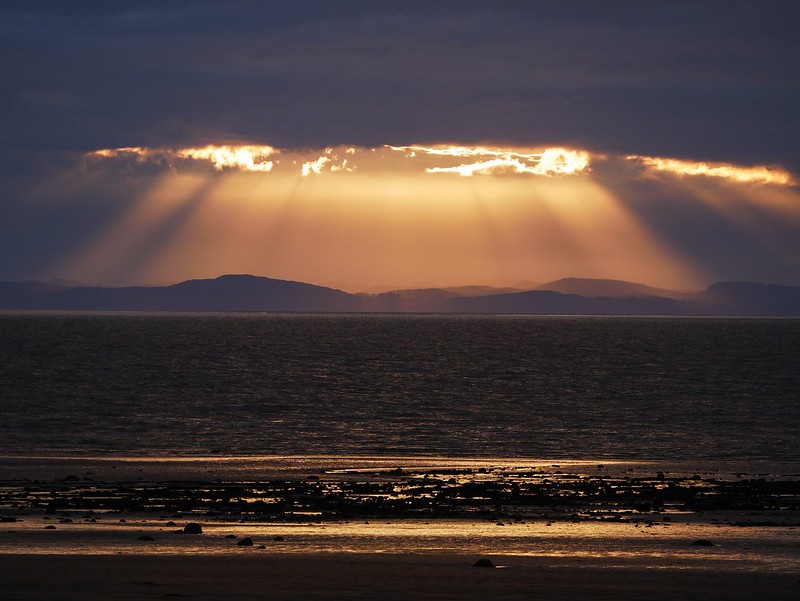 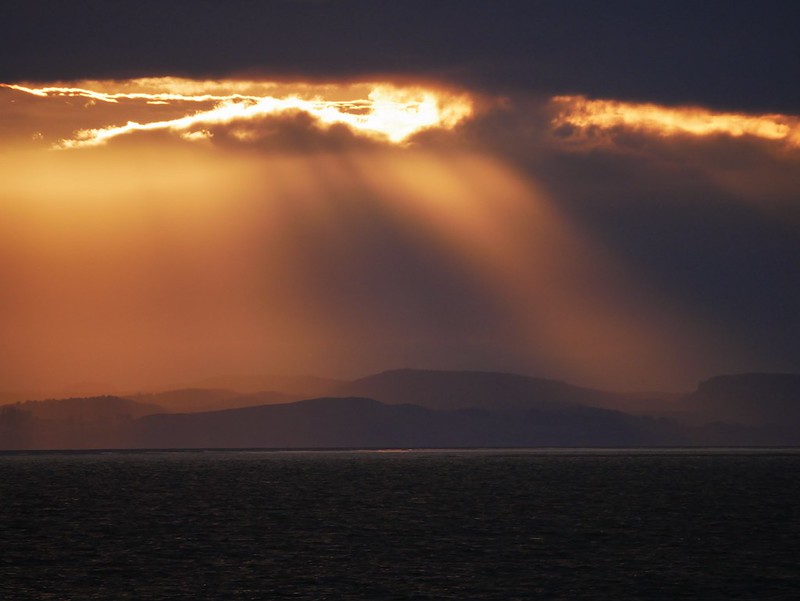 Three months after starting this roadtrip and we finally crossed the border into Scotland. We passed through a small town and noticed a lad carrying two big bottles of Irn Bru in his arms, it’s Scotland’s most popular soft drink and I said to Craig “that’s like the Scottish equivalent of a French person walking down the street with a baguette”.

We headed straight for Loch Lomond and The Trossachs National Park which we’ve driven through before but never properly explored. The drive there involved us trying to perfect a Scottish accent, we love the accent but the one line we kept practising was from a Scottish comedian who’s famous phrase is “give us a quid or you’re getting staaaaabbed”. We laughed a lot while trying to perfect it, both of us thought we sounded 100% Scottish…good job no one could hear us!

We opted to explore the eastern side of the park, stopping for a little wild swim in Scotland’s only lake; Lake of Menteith. It was rather peaty water for me and a little pondy on the edges so I let Craig swim this one on his own. Remarkably he said it wasn’t cold enough!! Maybe we’ve gotten used to the mountain fed rivers. Next stop was Loch Ard, a pretty lake surrounded by forest. It was so nice walking in the woods, we love variety and after not seeing a proper forest like this in ages it was quite the treat. This Loch was a lot nicer to swim in so we both had a well needed plunge as the weather was pretty damn hot.

The day was cracking on and we needed to find a spot to sleep, we knew Scotland was much more relaxed about free camping than in England and Wales but we weren’t sure how it was in national parks. We were seeing signs saying ‘camping permit required’ so I googled it and you can book a night for £3 but everything was fully booked. So we popped into the visitor centre to enquire and they were lovely and welcoming. They explained that it’s ok to just sleep in a lay-by for the night without the permit so that was wonderful news and we set off up the Duke’s Pass. 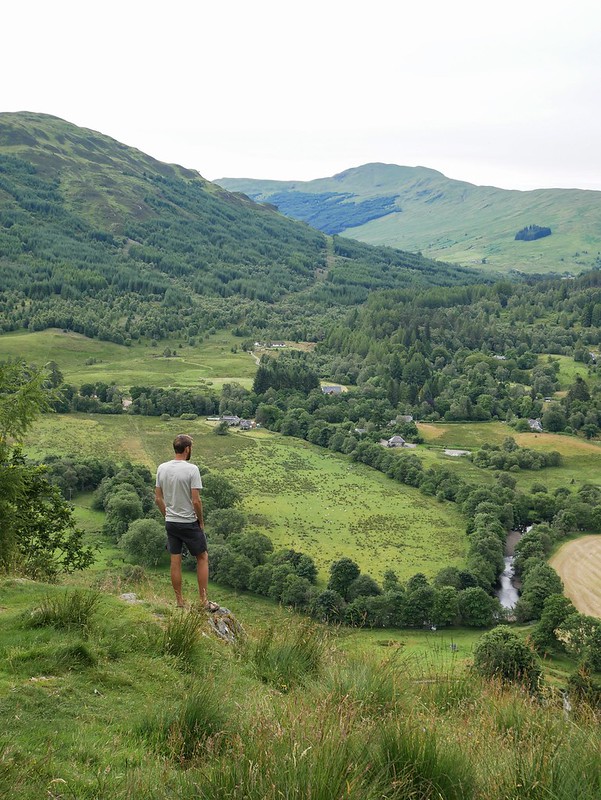 There weren’t many options to stay on the route but we found a gravel parking area by the road which already had one van in it so we parked the opposite end to them. They looked like a young couple on holiday, drinking Prosecco with a rented campervan. It was a lovely little spot to camp actually and warm enough to sit outside. Later on another camper pulled up, it seemed to be a grandma with her two grandkids. The romantic couple began making a fire and then we saw the grandma walk over to them. We wondered if she was telling them it wasn’t allowed, but in fact she was going over to invite herself and her grandkids to the fire to roast some marshmallows. As an introvert that hates kids I would feel so uncomfortable and want to politely say no but probably have to say yes to not be rude.

The following day we had a bit of a lazy start which turned out to be a silly move as it was the weekend and beautiful sunshine. We headed to Loch Lubnaig but the parking was already full so we ended up having to park near the river. Our plan was to take Roland boating on the lake so our back up plan was to bush-whack down to the river, pump our boat up along the shores and paddle upstream until we’re on the lake. 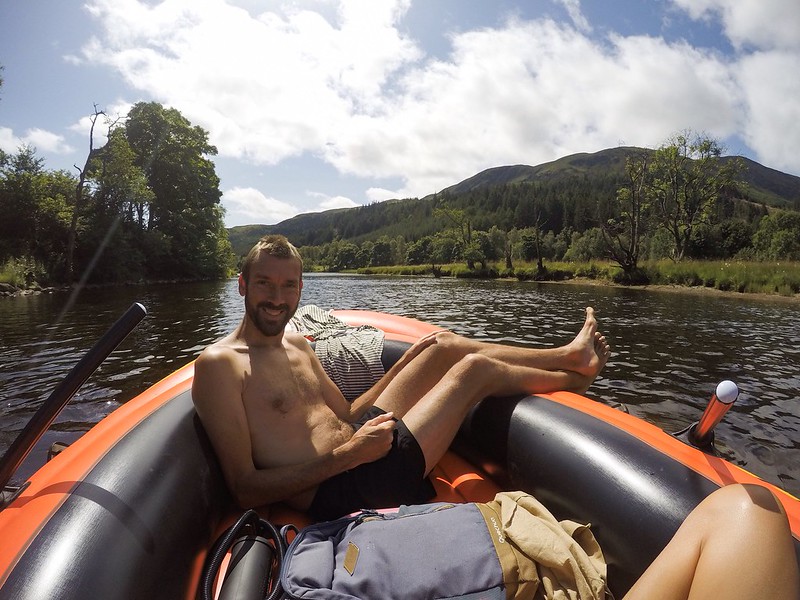 It was a bit of a windy day but we’d spotted lots of paddle boarders out on the lake so figured we’d manage. The river was extremely shallow, so shallow in fact that Craig had to get out and pull Roland along with me sitting inside like an absolute princess. When it was slightly deeper he laid on the boat while kicking his feet in the water “propeller power!!” according to him. Finally we were able to paddle upstream and eventually we could see it opening up into the lake. It looked like a bloody carnival scene with the shores covered in people and their marquees, and the water was full of kids on inflatables. We decided to give the lake a miss and just relax on the peaceful river so we pulled up along a quiet patch of shoreline to have some lunch.

As soon as I got my sandwich out a gust of wind whisked past us and then we watched Roland flip up into the air and land upside down. We hadn’t emptied the boat so we still had some clothes and my GoPro in it which were now floating down the river. Craig ran so fast and swam like a lifeguard to rescue Roland who was drifting away from us while I took an extra 15 seconds to clock what was happening before I ran out to save our stuff.

We figured she’d gone airborne because she was partially on the gravel shore so we opted to keep her in the water and tie her rope onto a rock like an anchor. A couple of bites into our sandwich and Craig was running off again “SHE’S DRIFTING!” The rock had become loose and she was basically blowing away from us. For our final attempt at mooring our damn boat up we kept her in the water but tied the rope to a huge rock on the land. The next gust of wind swept through and she was lifted up like a possessed body before slamming back into the rocks, our poor boat! It was the most stressful lunch imaginable and we couldn’t even relax so we decided to just pack up and eat while we were on the water. The only problem was the winds had gotten even stronger so we had to take it in turns to paddle while the other person ate. It was almost impossible to paddle, the wind was so powerful and rippling all the water around us that we were just staying in the same position. We made an agreement not to paddle in windy weather ever again! At one point Craig lifted our canvas shopping bag in the air and we were able to use it as a sail!

The following day was much cloudier so we just opted for a short morning stroll up to the viewpoint of Creag an Tuirc. It was a nice walk through the forest with a view across the valley and down to Loch Voil. Our final bit of sightseeing in the park was a drive along the shores of Loch Earn and to be honest it wasn’t our thing. The whole national park was just too busy for us, and I guess a bit of a shock, we presumed with all the space Scotland has that it wouldn’t be that busy but it was like being back in Snowdonia. Oh well, you can’t love every place. 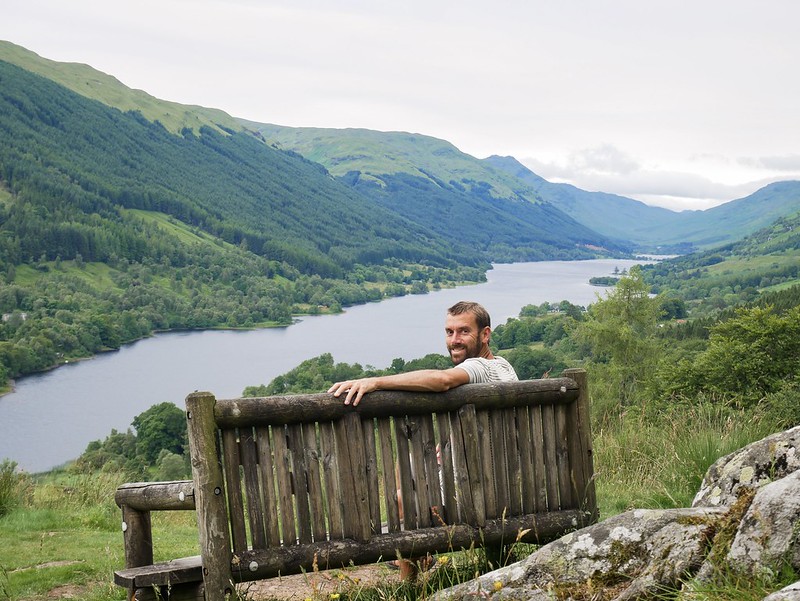 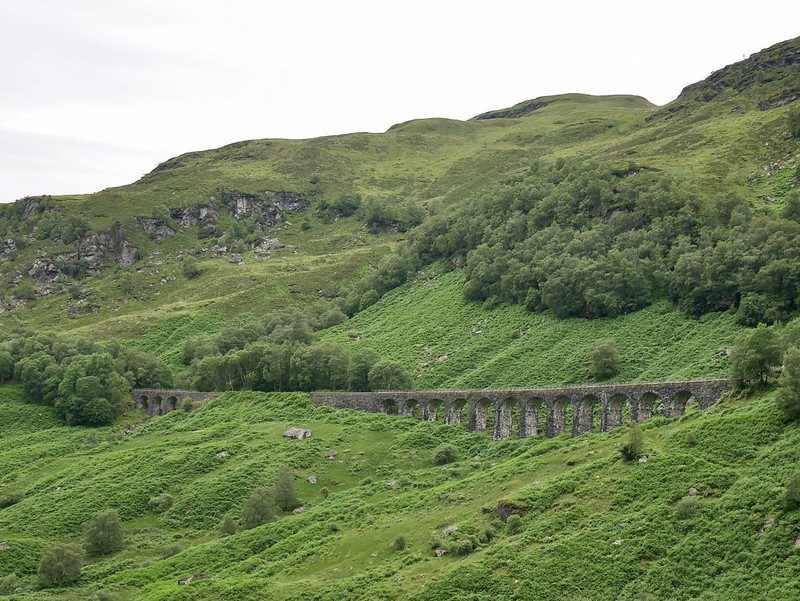