We opted to take the Honister Pass road to Buttermere Lake which turned out to be a beautiful winding road with steep mountains on either side of us. There were some lovely spots to park up and enjoy the view and one was so nice we decided to stay the night. We parked up right beside a river with a nice grassy patch and mountain views all around. It was idyllic. We took a little stroll to see our surroundings and we discovered a spot in the river which was deep enough for a swim so we cooled off and then headed back for dinner. The area was filled with foxglove flowers and the scene actually reminded me of a place we camped in Norway back in 2014. A beautiful golden light filled the valley at sunset and it was such a tranquil little spot to spend the night. 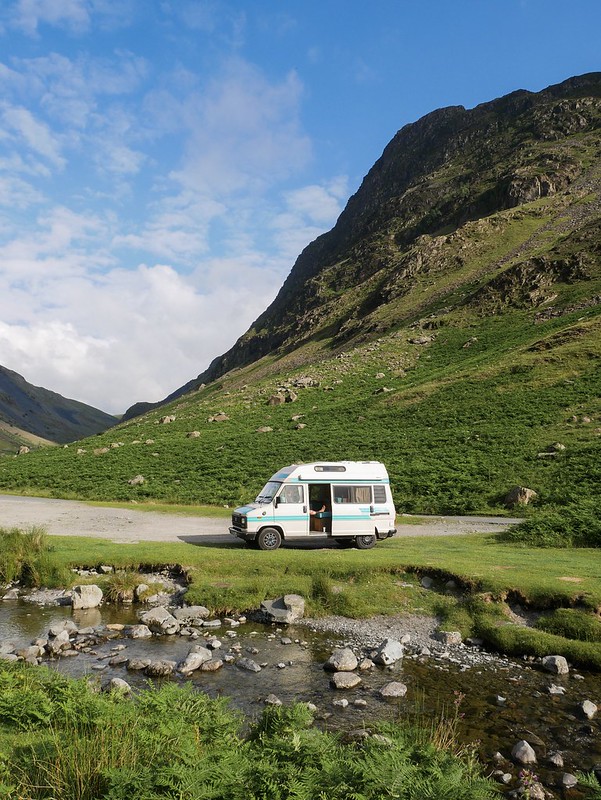 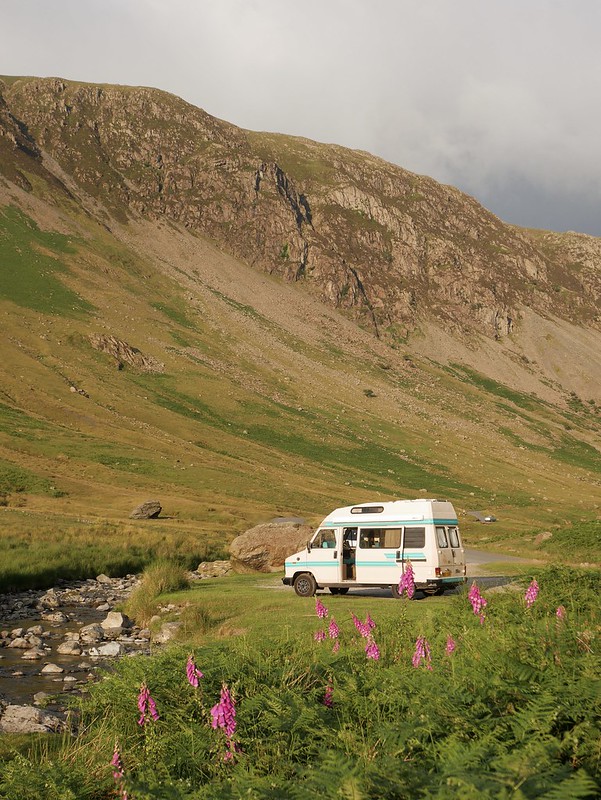 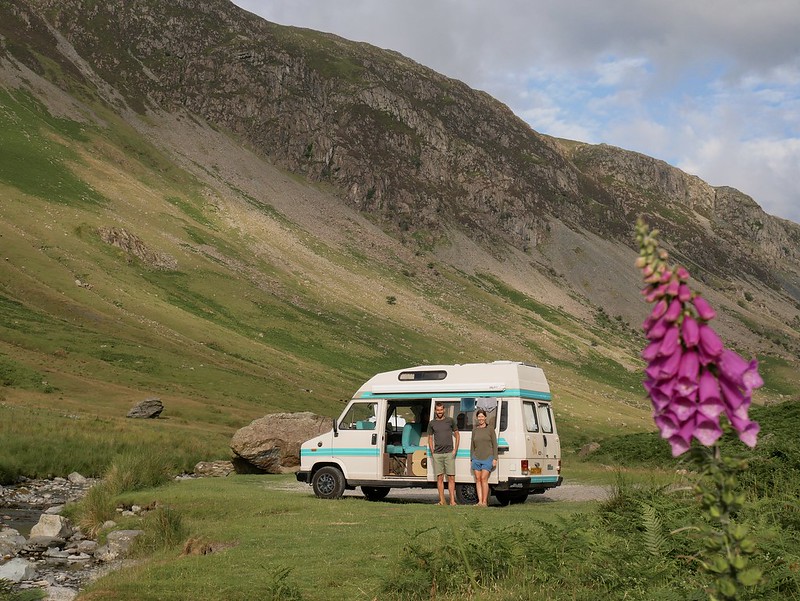 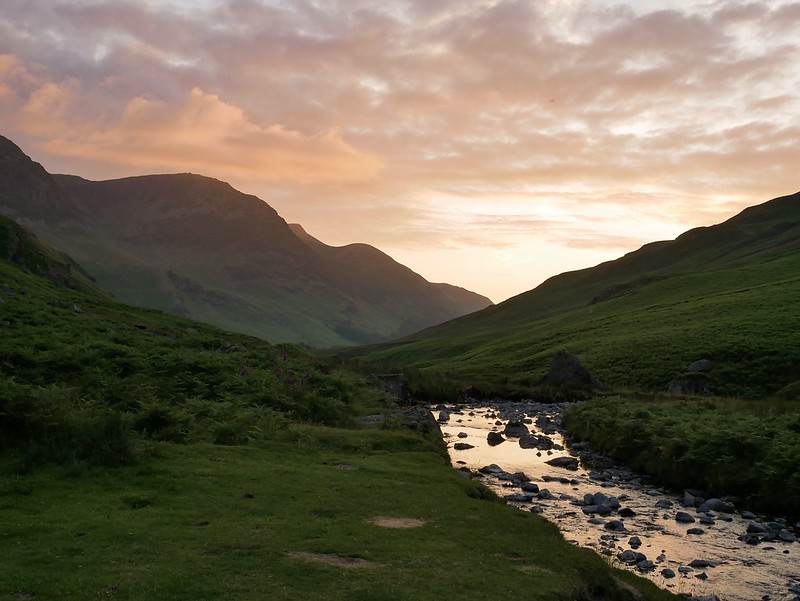 The following day we decided we needed to just have a day off hiking. We’d been pushing ourselves a lot and had basically hiked 4 summits in a row so we were feeling pretty exhausted. It was a cloudy and drizzly day so we weren’t missing too much but it was particularly beautiful in the morning when cloud drifted along the mountain tops. We decided to just stay put for the day and spend another night in this lovely camp spot. I baked some cookies and we had a little swim in the river, it was so nice to relax with the view but then it was instantly taken away from us. A car drove really fast behind us and parked right up on the grass outside our van. We were thinking “surely no one would have the audacity to camp there, right?” There was such a large gravel area to park that I felt it would be wrong and damaging to the ground to park on the grass, hence us taking the closest spot to it on the gravel. 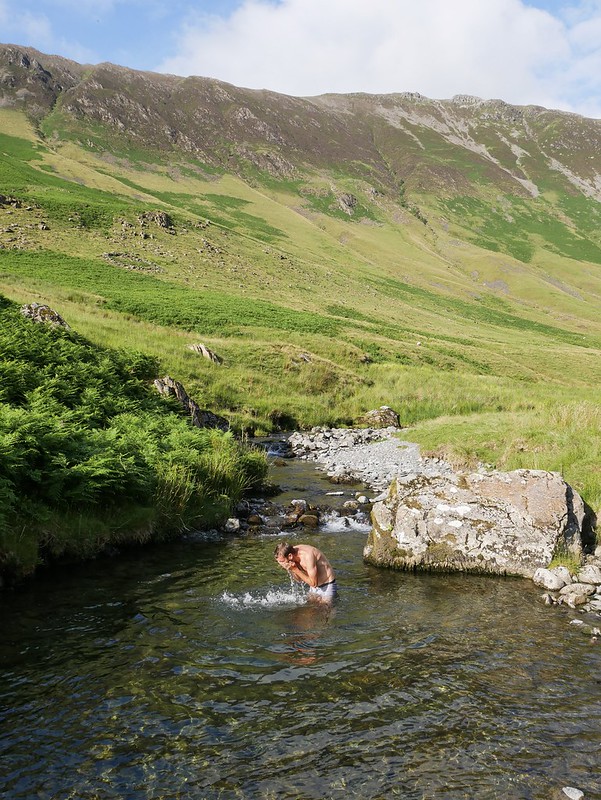 A middle aged couple came out and erected their huge camping chairs right in front of us while cracking open a Stella and strongbow. I think my jaw was probably dangling on the floor at this point. Whatever happened to camping etiquette? I was absolutely fuming, our view was destroyed. It was like we now had a live tv show, watching the village drunks. Anyway, it got worse because just before sunset 5 young lads driving three separate vehicles pulled up. I must admit, I hate convoys. I dread seeing vans in convoy because I know if they park near us they’ll be outside all evening chatting loudly…and I’m an introvert with quite a dislike to humans. Bare in mind that sleeping in your vehicle in the Lake District isn’t technically allowed…these guys had the cheek to park three vehicles in a huge U shape and then erect the most humongous tarp. One guy also pitched a tent and then the club music was turned on. I literally never understand why people come to natural places and play music. We made a vow to be careful where we park on weekends from now on, I’m too old to be sleeping next to club music. 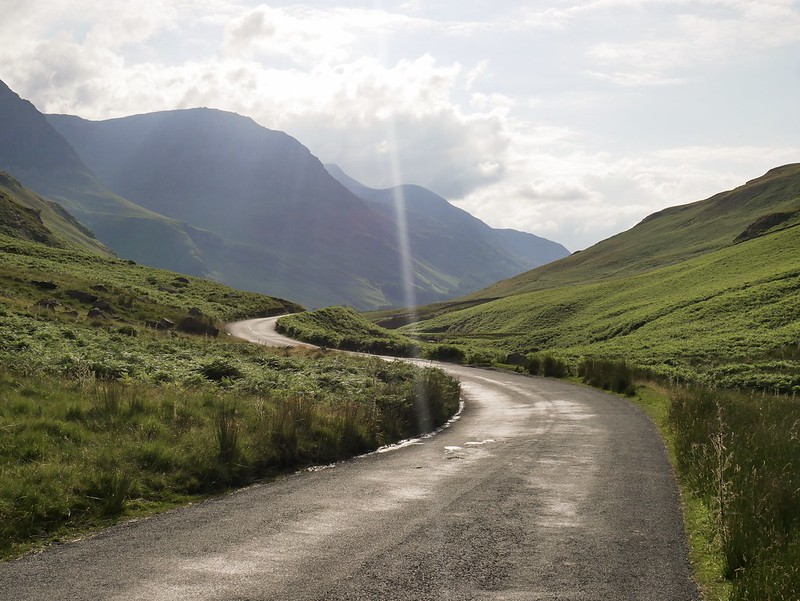 After a rather terrible nights sleep we couldn’t wait to set off in the morning so we drove down to Buttermere Lake. We set off on a hike which would give us superb views of the valley, said to be one of the prettiest in the Lake District. It was a loop hike that involved three summits; High Crag, High Stile (the highest at 806m) and Red Pike. To begin with we were treated to some fantastic reflections of the mountains we were about to hike, perfectly mirrored in the still waters of Buttermere. Once we began gaining elevation we were supposed to get great views down into the Enerdale Valley but after a sunny start big storm clouds took over the sky. The mountains were hidden beneath gloomy clouds but occasionally the sun popped out. It was a really beautiful hike actually, I can only imagine how good it would look with the sun out. The downhill section was extremely steep and slippery but we had nice views of the lakes below which we were soon walking beside. 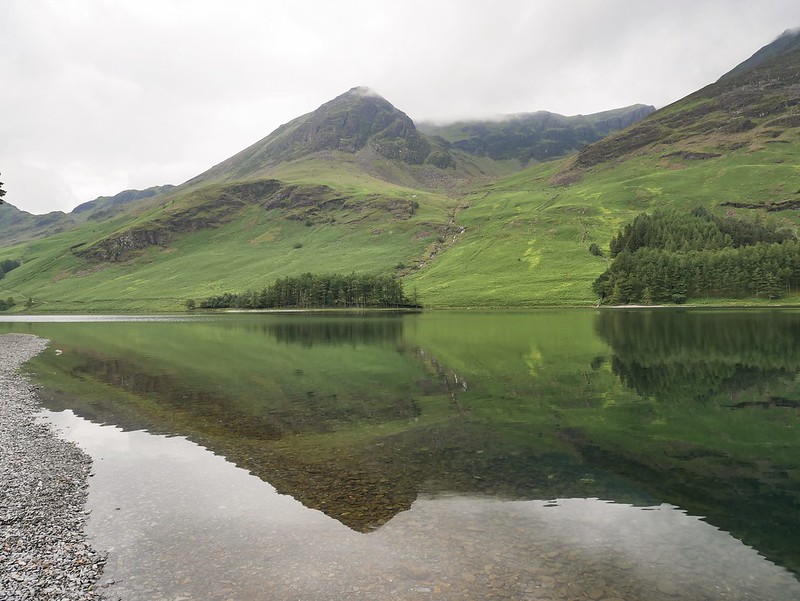 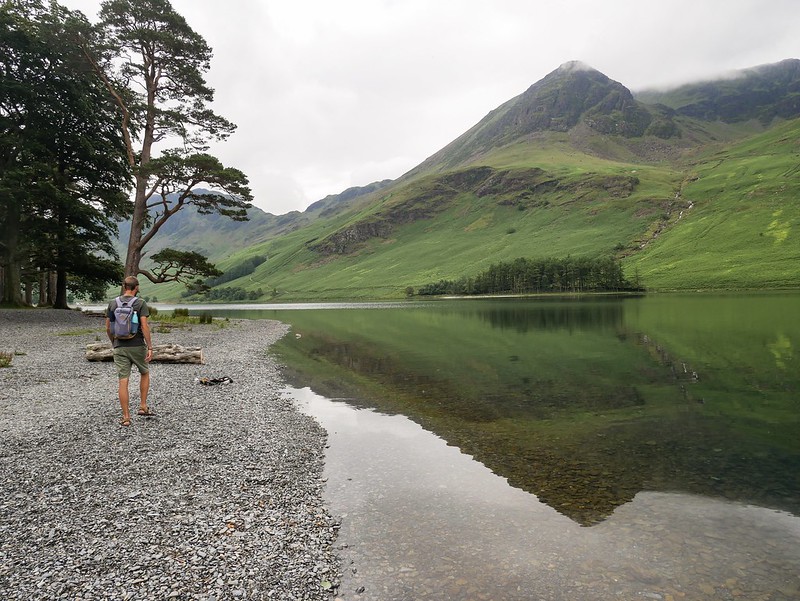 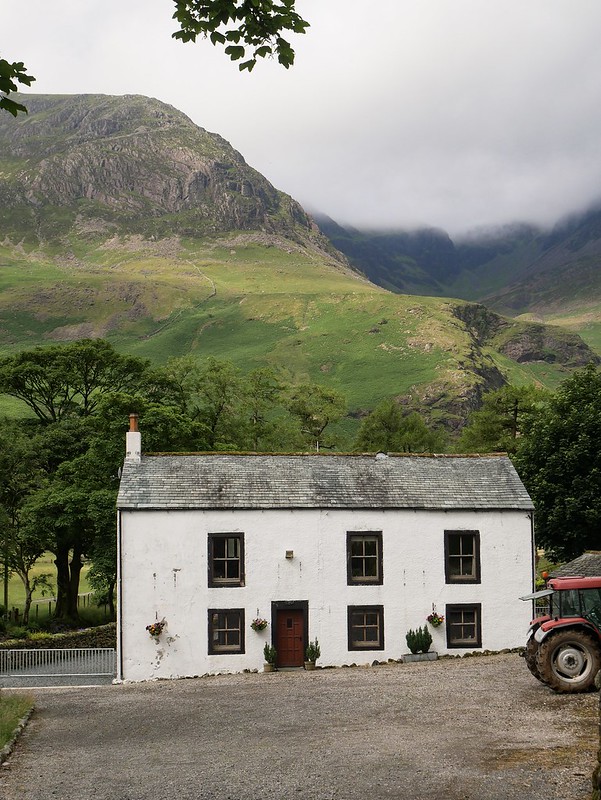 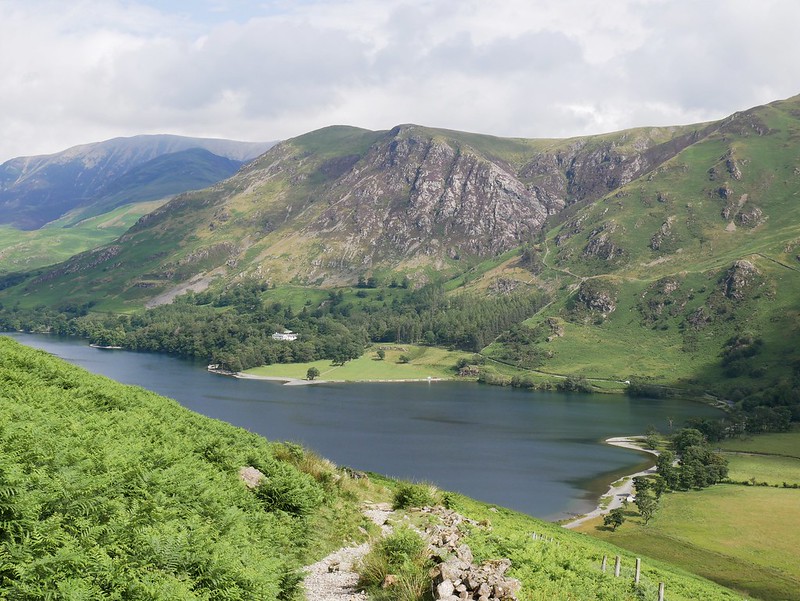 Once we were back at Helga we headed to Crummock Water to park up with a view for our afternoon cup of tea. We found a spot to park but it was busy with cars and people down on the lake shore. I was surprised because a couple I follow on Instagram had just shared about spending a few nights camping in this exact spot and making it look so remote and peaceful. It was literally a narrow parking area on a rather busy single track road. So any car that drives by shakes you and you constantly have other cars pulling up. 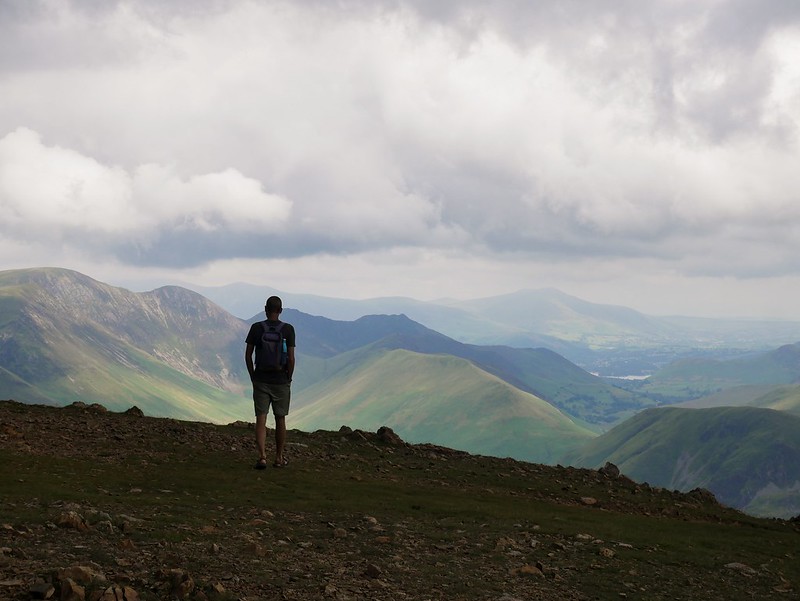 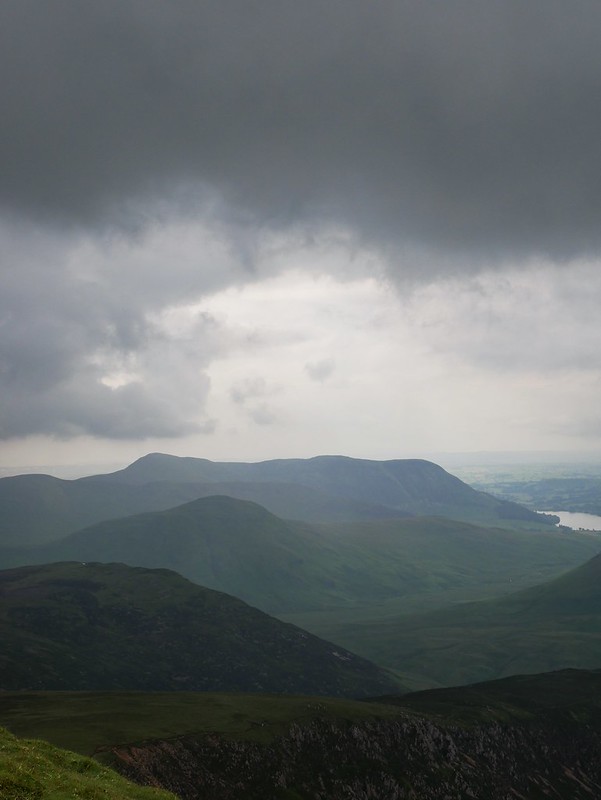 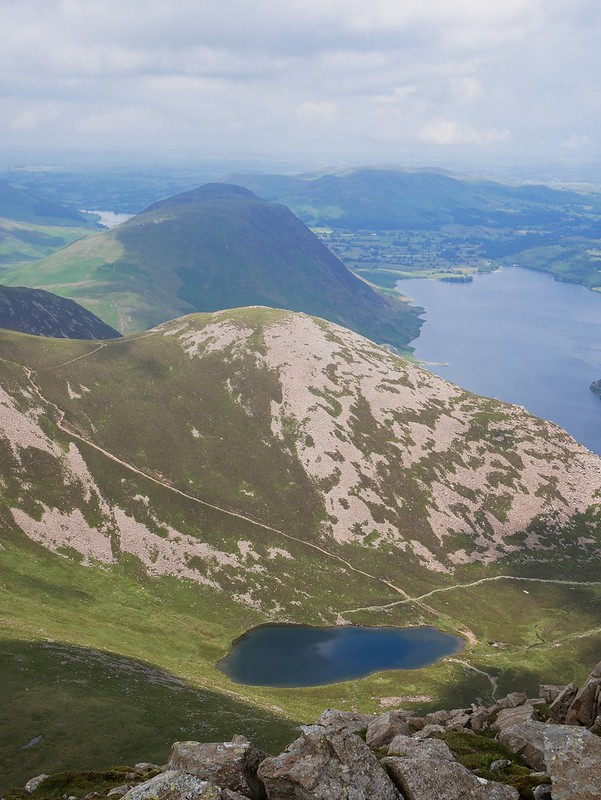 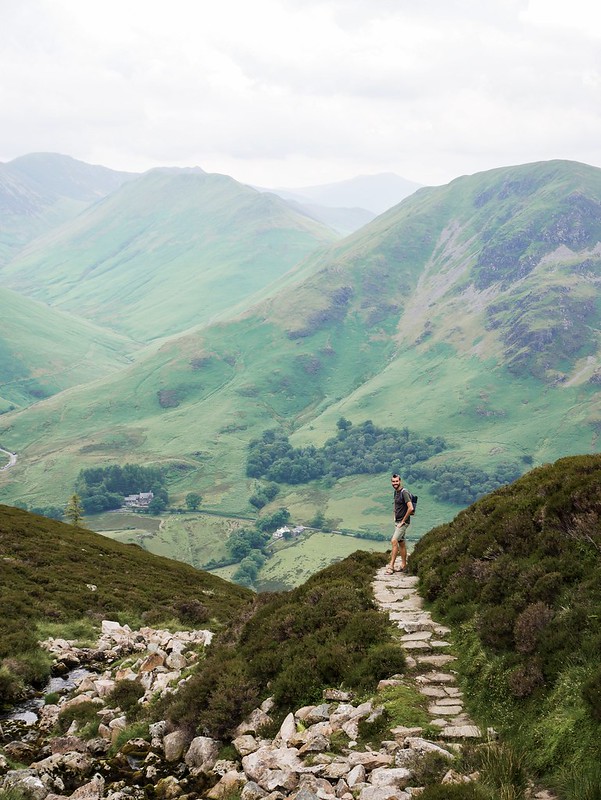 The view was nice but it wasn’t nice enough to sleep along a road so we set off, searching for our own spot and boy did we find it. We ended up at a small lake where we spotted a single parking spot along the shoreline. We soon discovered that it was the only parking space along the entire lake to have a view and access to the lake so we felt very happy. It was still alongside a road but it wasn’t half as busy as the previous one we’d parked along. 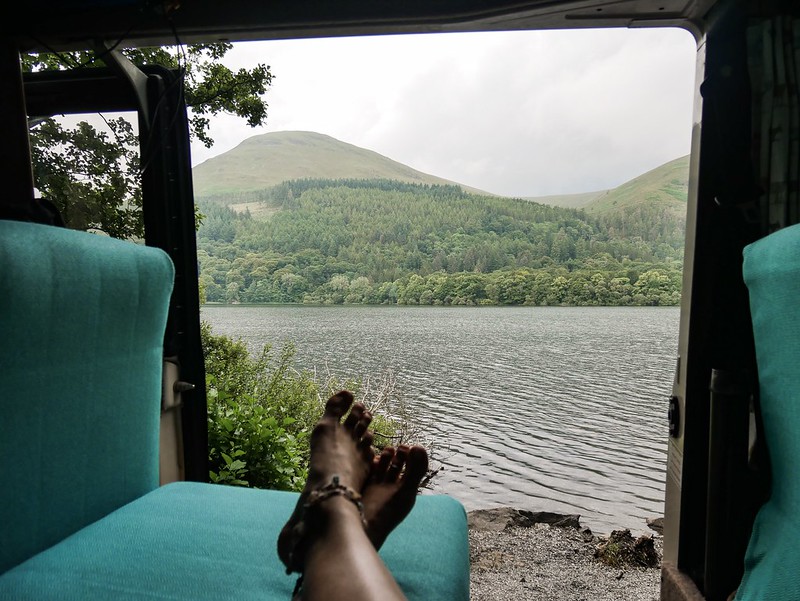 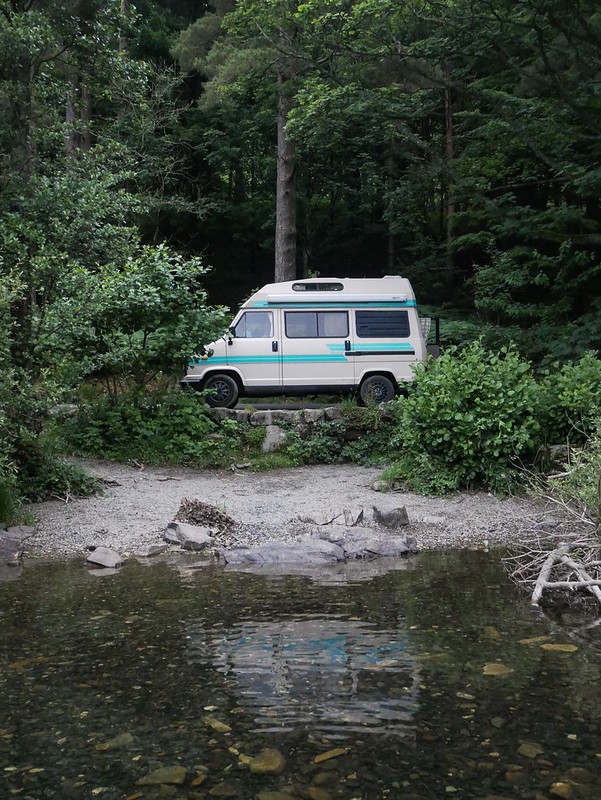 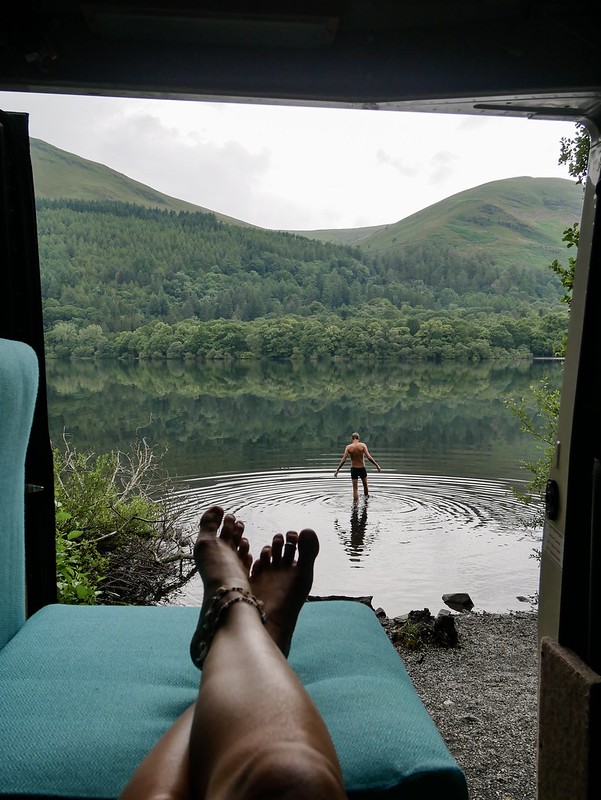 We felt like we’d found paradise at last. There’s been so few beautiful park ups like this on our trip so we ended up staying a couple of nights in this spot as we loved it. We had lovely, calm weather so the water was completely still and reflected the mountains and clouds like an oil painting. We hiked up the mountains opposite us one day and spent the rest of our time relaxing with a million dollar view. Interestingly on our final night the winds picked up and blue-green algae washed to the shore. We still swam in the water but just made sure not to put our heads under. It’s interesting that the lake showed no evidence of the algae beforehand, so you really do have to be careful if you have a dog as I think it can be deadly to them. 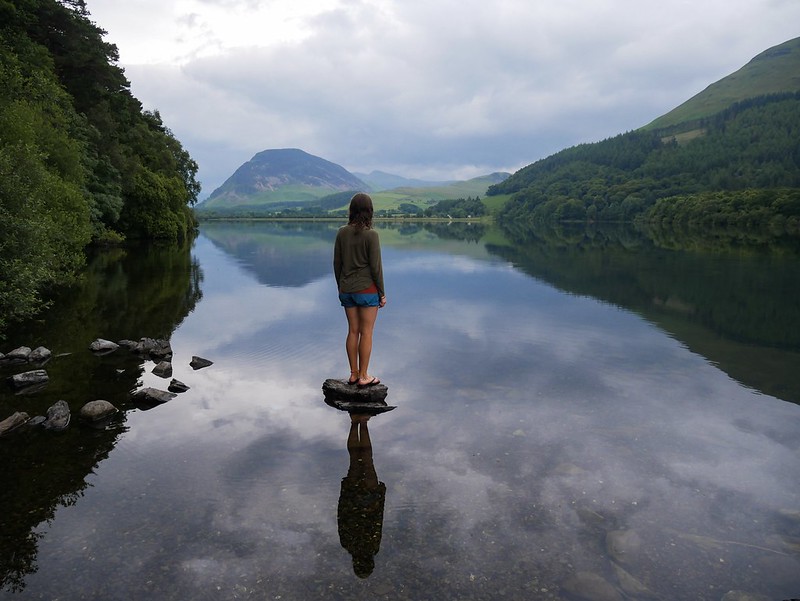 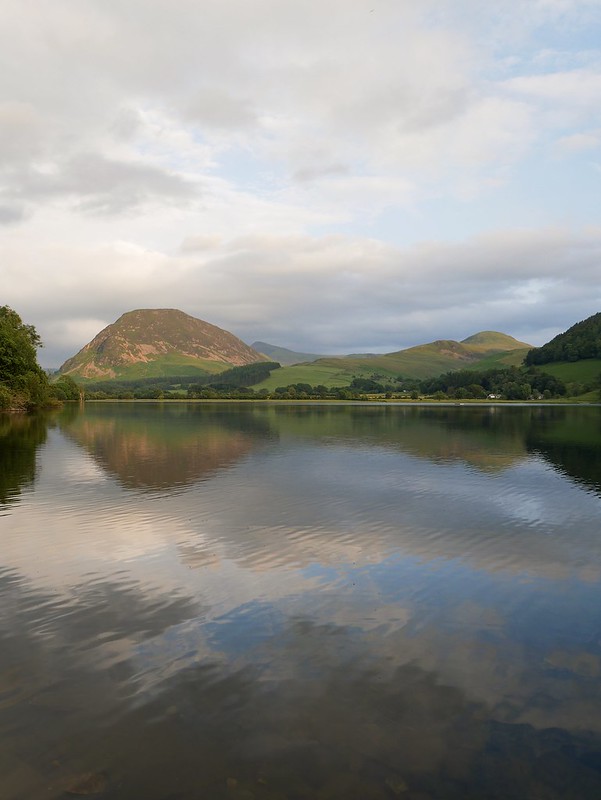 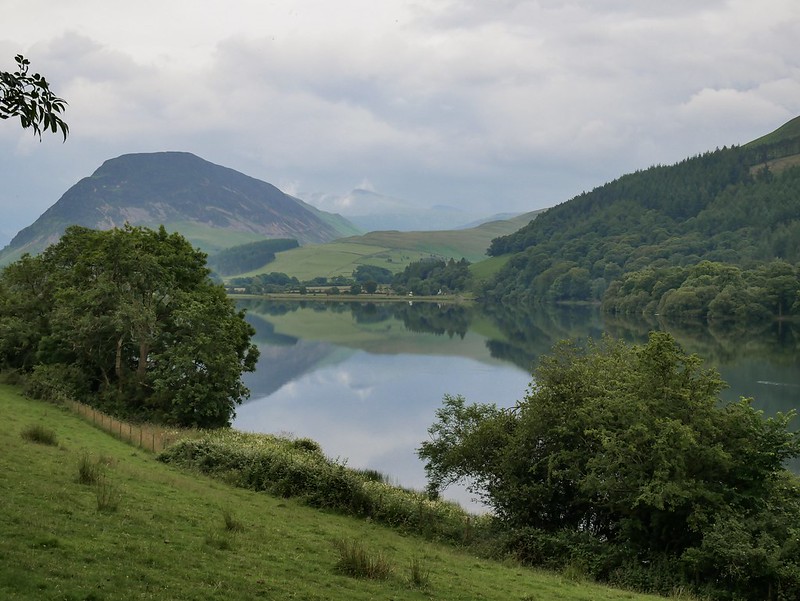 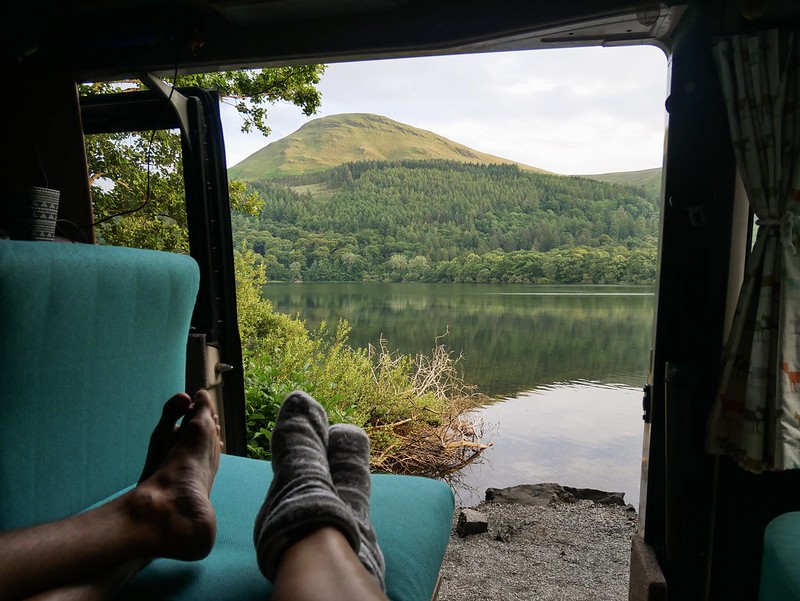 Now it’s time for us to head to the mechanics for Helga’s MOT.