It was our first visit to the Peak District National Park and to be honest we didn’t love the place. I don’t know if it was due to me looking at the map beforehand and realising it was surrounded by huge cities. It sort of just looked like a large communal park for the residents of Manchester etc. There were numerous roads cutting through the park and even train stations, it was just too accessible to be a national park in my opinion.

Anyway, we set off to explore the area, starting with a walk to Three Shire Heads, where two rivers meet along with three English counties; Derbyshire, Cheshire and Staffordshire. The trail there was lovely and peaceful, walking beside a river. Then we came across a huge dead sheep in the pathway, the stench of death hit us like a brick wall. We had no option but to step over the poor thing and continue on our way. 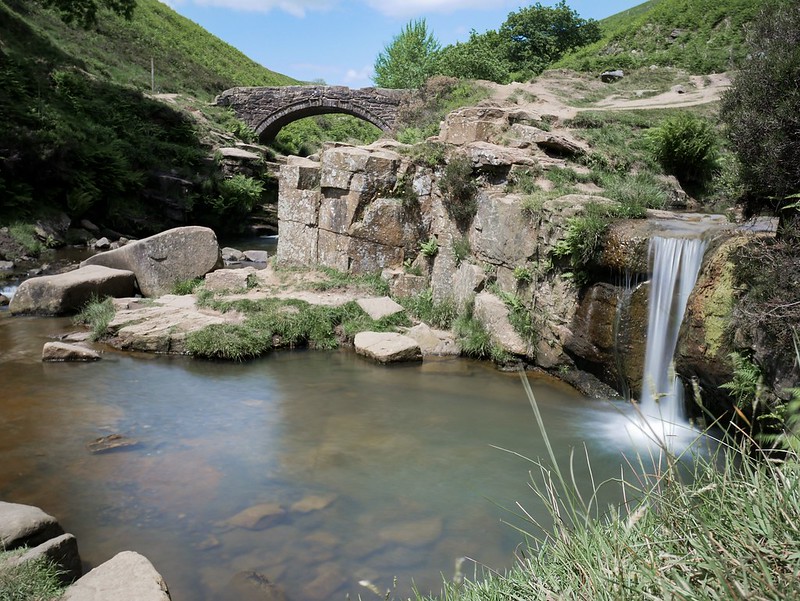 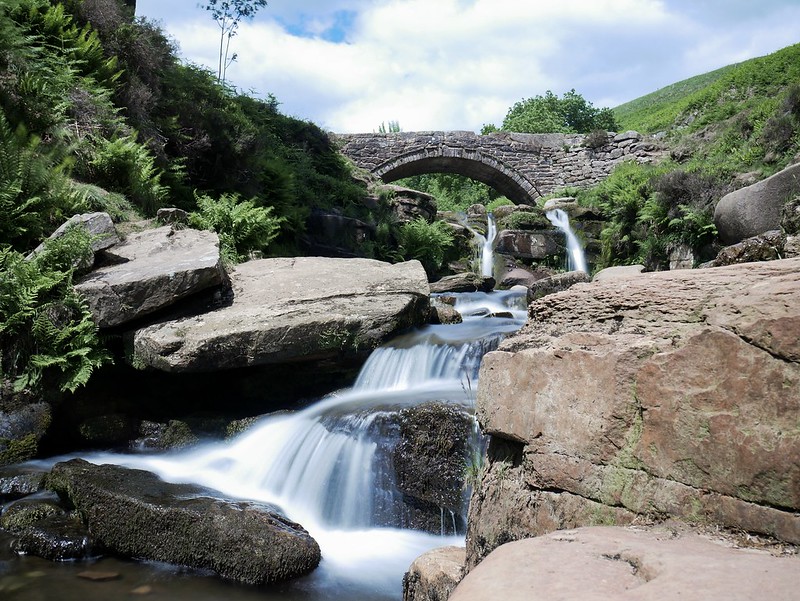 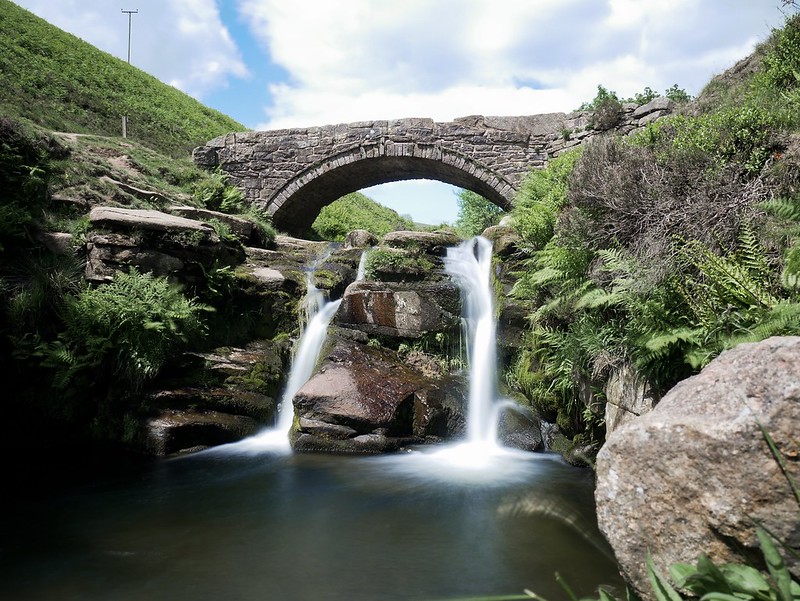 There must be a much more trodden trail leading to this spot because as soon as we arrived the tranquility vanished. There were lots of groups of teenagers lounging around the river. I managed to get some photos of the pretty bridge though and it was interesting to see how each river was a different colour, one a more peaty brown colour and the other a clearer green. 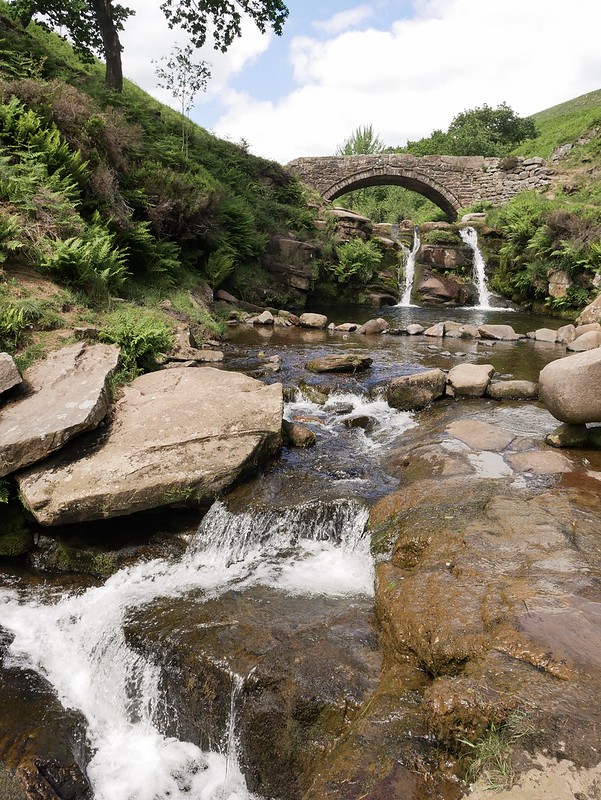 In the late afternoon we headed east to hike around the Chee Dale area. A totally overgrown trail with big tropical looking leaves almost blocking the way led us alongside the River Wye. It was actually a really nice and peaceful route with hardly a soul around. We were led under viaducts and through a sort of gorge with steep limestone walls. There wasn’t space for a pathway through the gorge sections so instead we followed some stepping stones which were quite a novelty. It was hot enough for a wild swim but the water didn’t exactly look appealing, it was almost clear but it had a hazy-ness too it like it was polluted. It’s not often we say no to swimming but this park ended up being the first we haven’t taken a wild dip in. 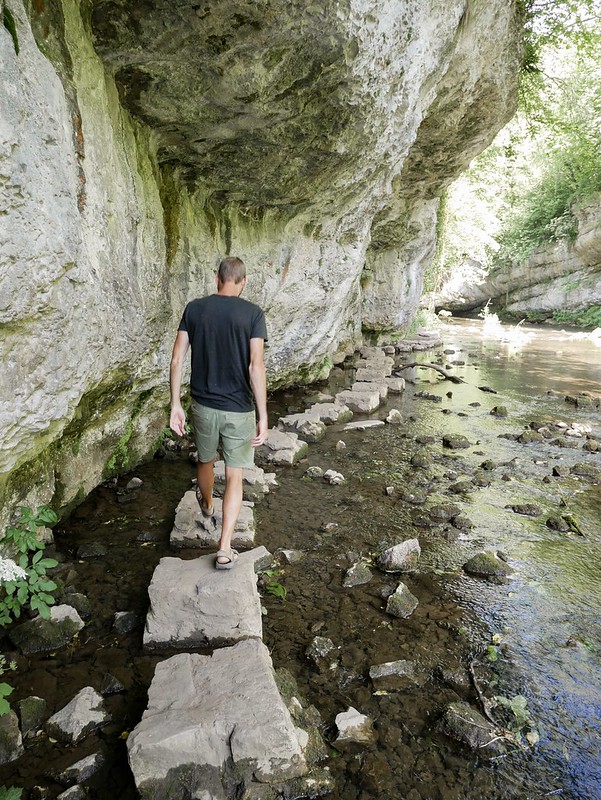 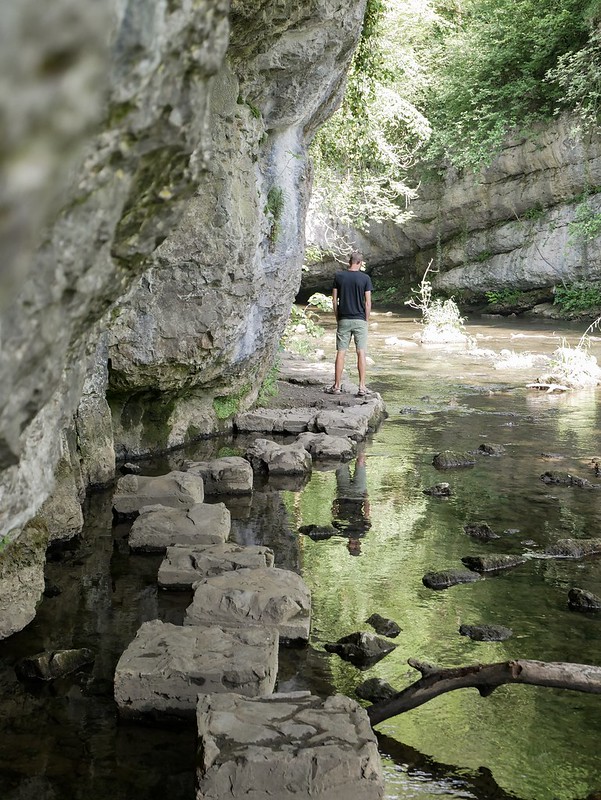 We passed a couple of rock climbers further along, a man was scaling the wall while a lady held onto his ropes at the bottom. As soon as we walked by she gave a couple of big tugs on the rope and next thing we know the man is screaming “SLAAAACK, SLAAAAAAACK!!! YOU’RE PULLING ME OFF THE WALL!” Once she loosened the rope he was fine and we walked off thinking how hilarious that situation was, it was like the women didn’t want to look like she was just standing there doing nothing when we walked past so she pulled on the rope at the mans expense. We made the walk a loop by heading back via the famous Monsal trail, a disused railway track which has become a very popular cycling route. That evening we headed up an extremely steep country lane looking for a spot to camp. The views were incredible but it was at such a slant that we had to give up and pick a flat spot without a view.

The following day we did a hike up to Bamford Edge, an area which rises up and forms a large plateau, the ‘edge’ is a sheer drop of 20m or so. The top was covered in bizarre rock formations, some of which jutted straight out over the drop-off with a nice view of the reservoir behind. We extended the walk by continuing around to the next high plateau to Stanage Edge. The weather had clouded over quite a bit so the scenery wasn’t so impressive but it was a pleasant stroll, if a bit of a long walk by the time we got back to Helga. 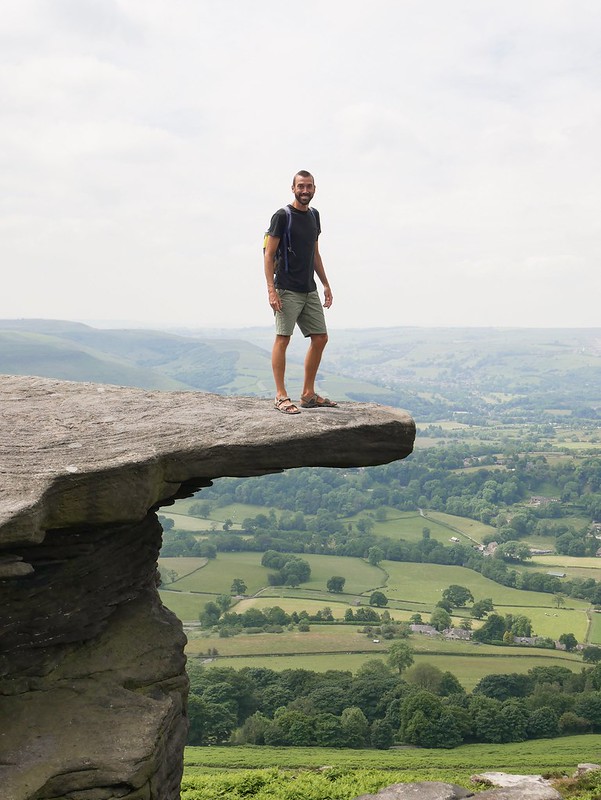 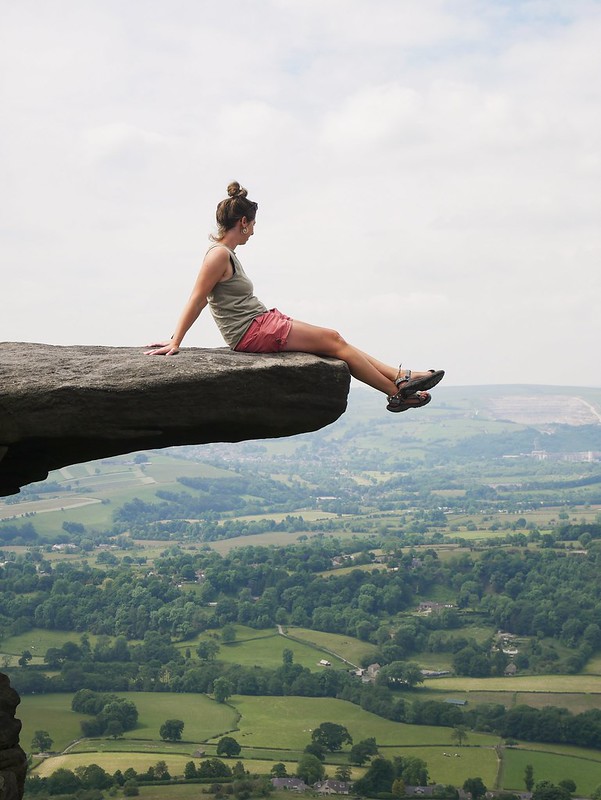 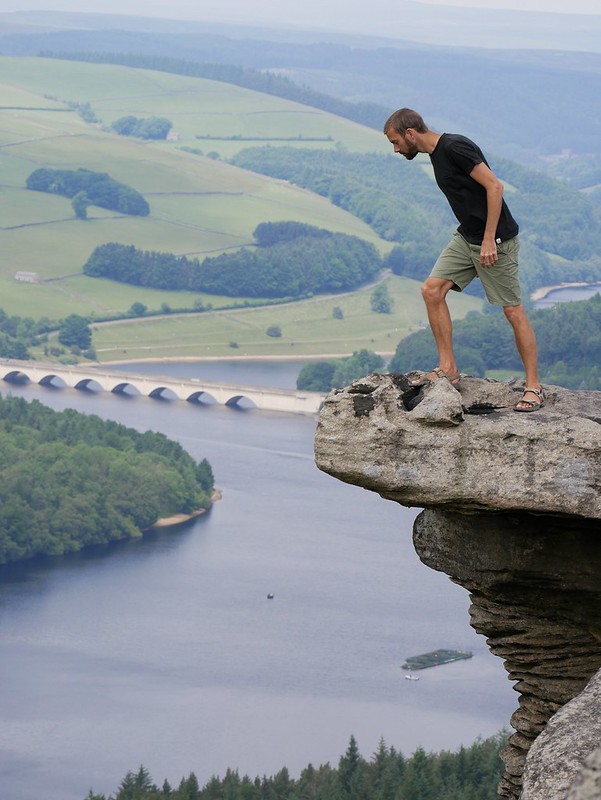 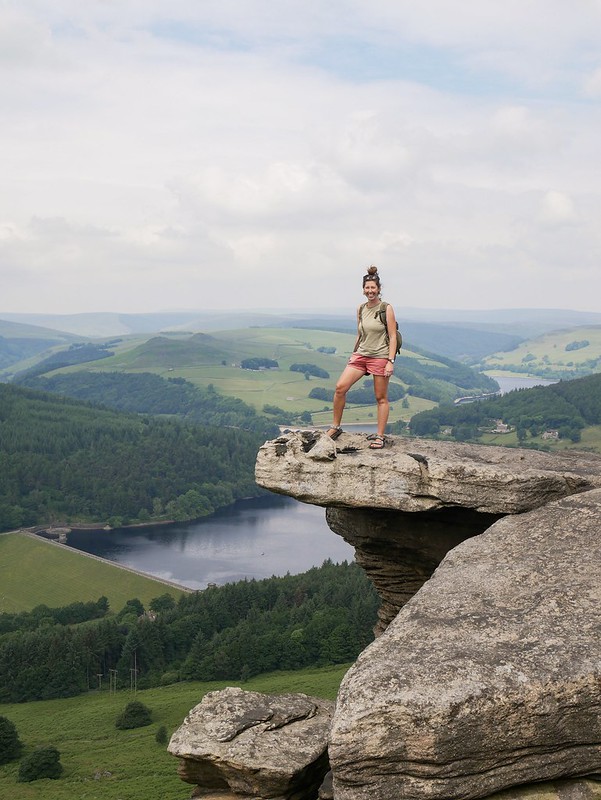 We based ourselves near the village of Castleton that evening so we were ready to do a stroll the following day around Winnats Pass. It was a particularly foggy morning as we wandered up the road through a lush green gorge which was quite impressive actually. Seeing the small cars driving along the road gave a good size comparison. We continued our hike up to the summit of Mam Tor at 517m, but low lying cloud blocked all the views. 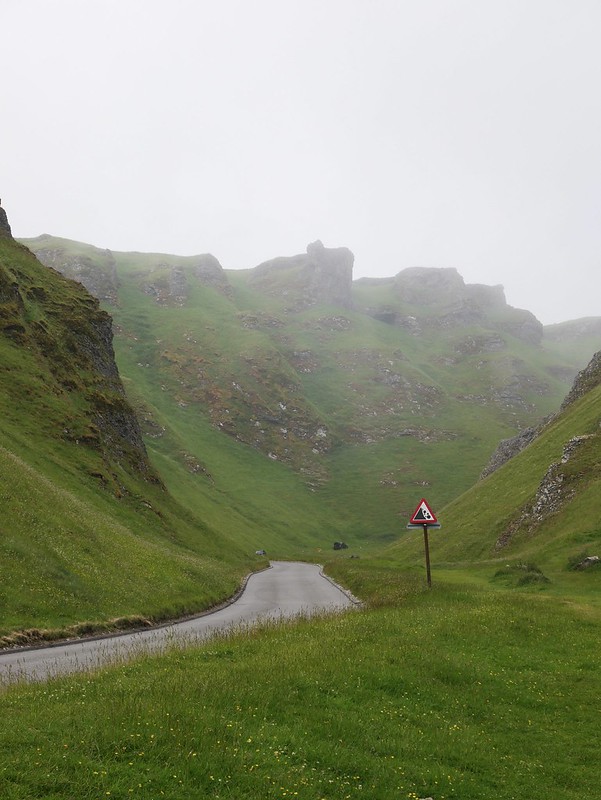 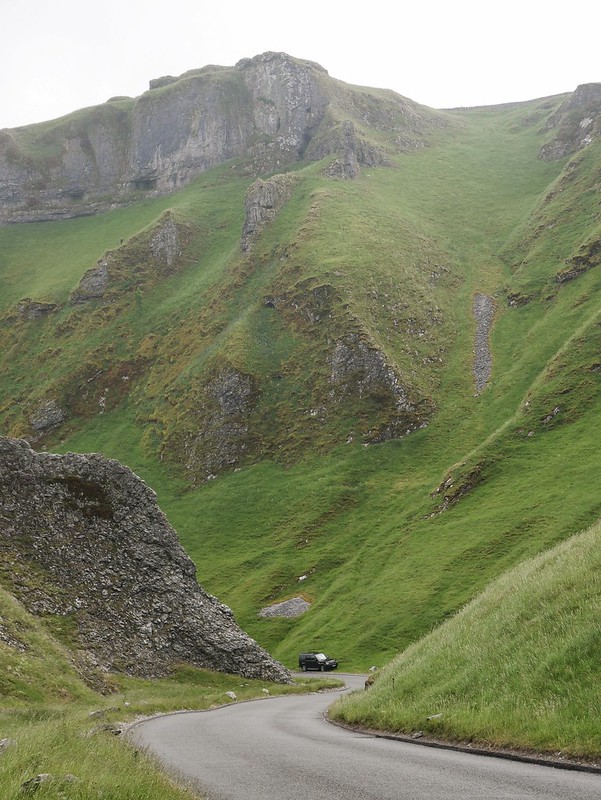 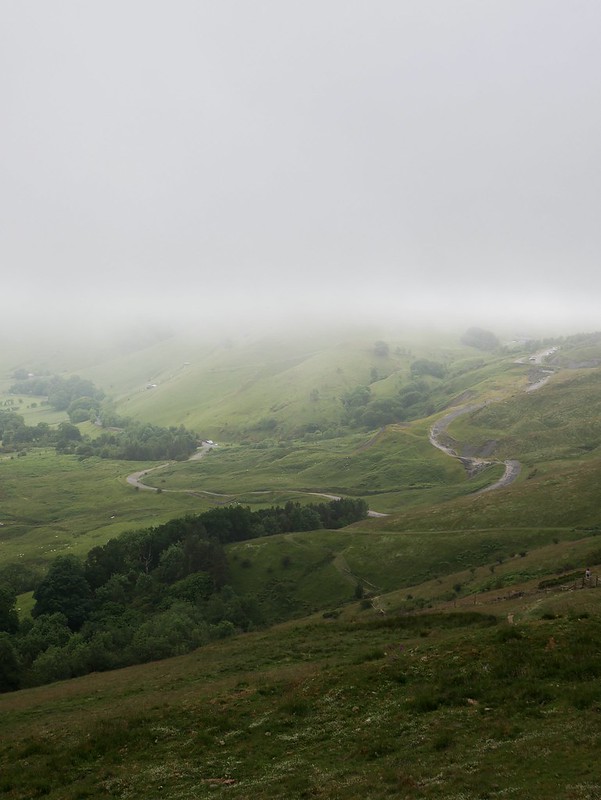 We decided to treat ourselves to lunch out at a country pub in Castleton and I was presented with a veg burger which had the toughest bun in the world. Trying to take a bite felt like I was wrestling with some tough meat so I had to complain and they made me a much better one. Pretty disappointing that they’d serve a bun so stale though, I don’t even think a duck would of appreciated it. 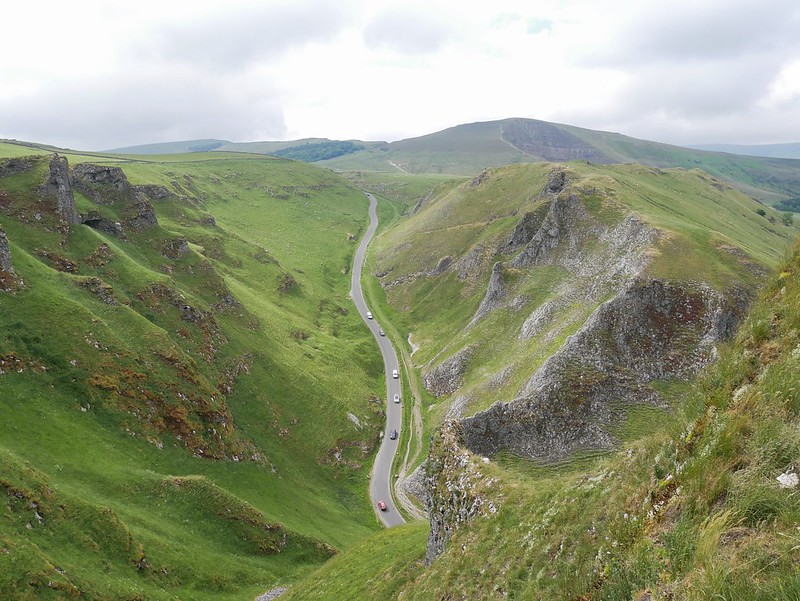 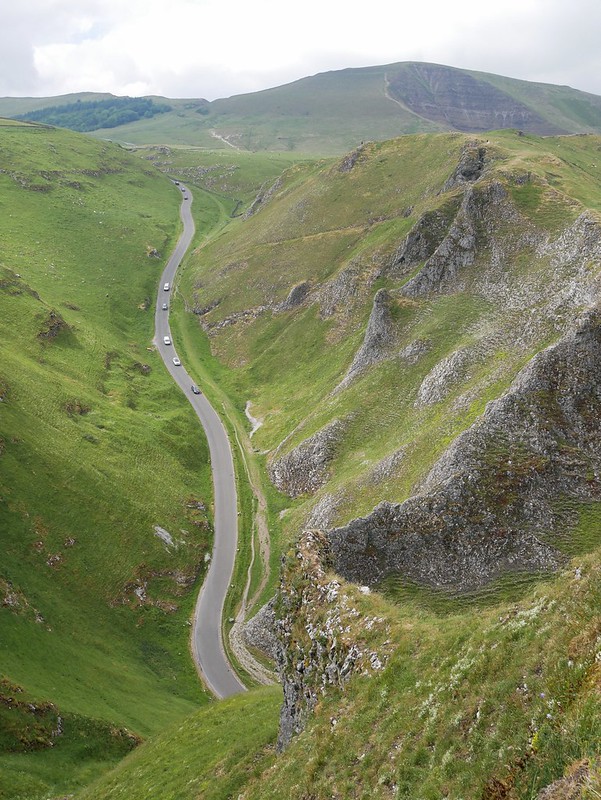 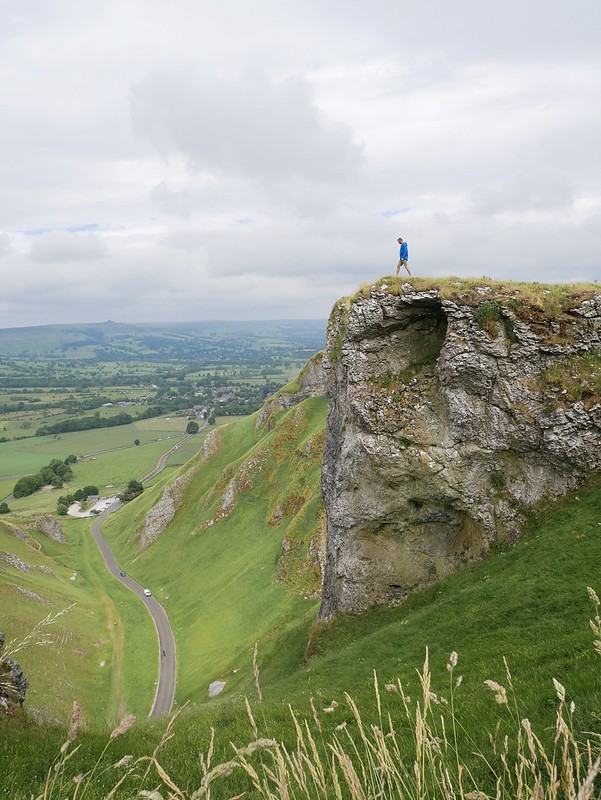 By the time we left the weather was clearing a bit so we decided to go on another hike. This time we headed up an extremely steep track to get high above Winnats Pass. It was a bloody tough walk but short and sweet, offering fab views of the little road winding between the lush green canyon. Soon enough the sun was totally out and all of the green hills popped with colour, it looked so much better in the sun. 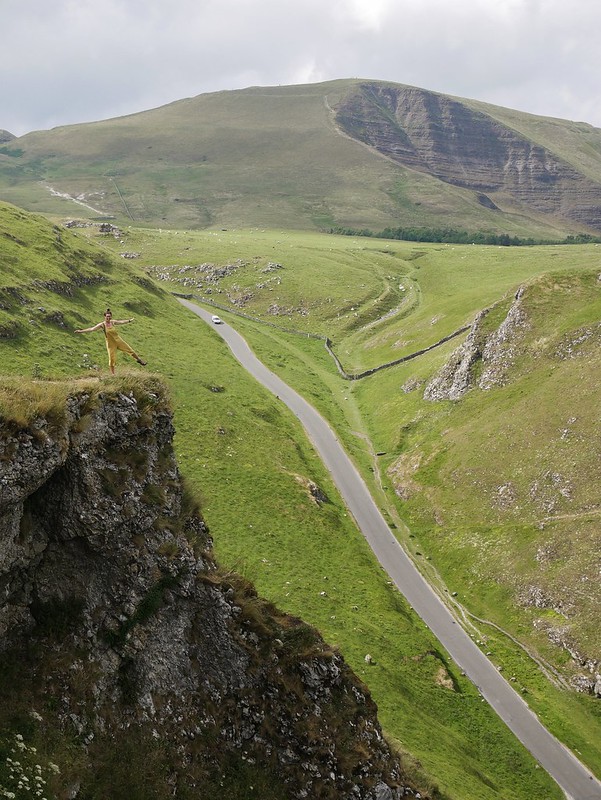 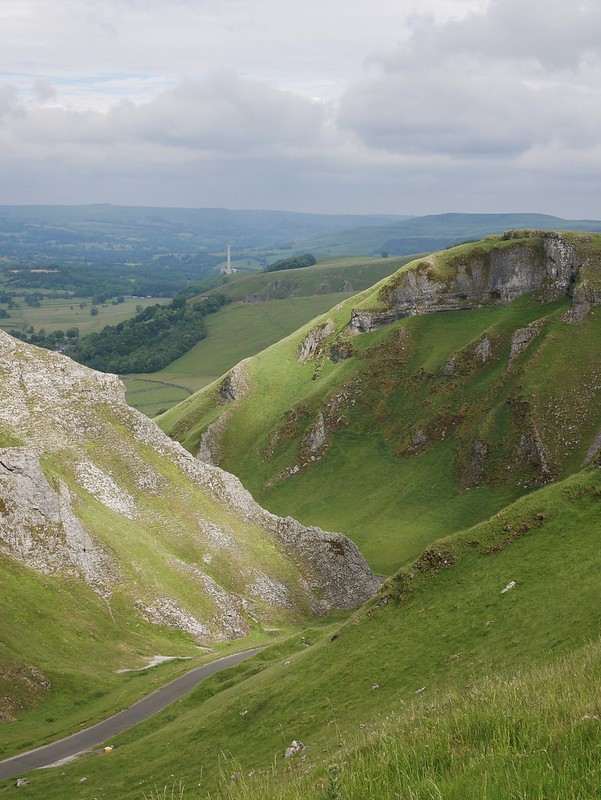 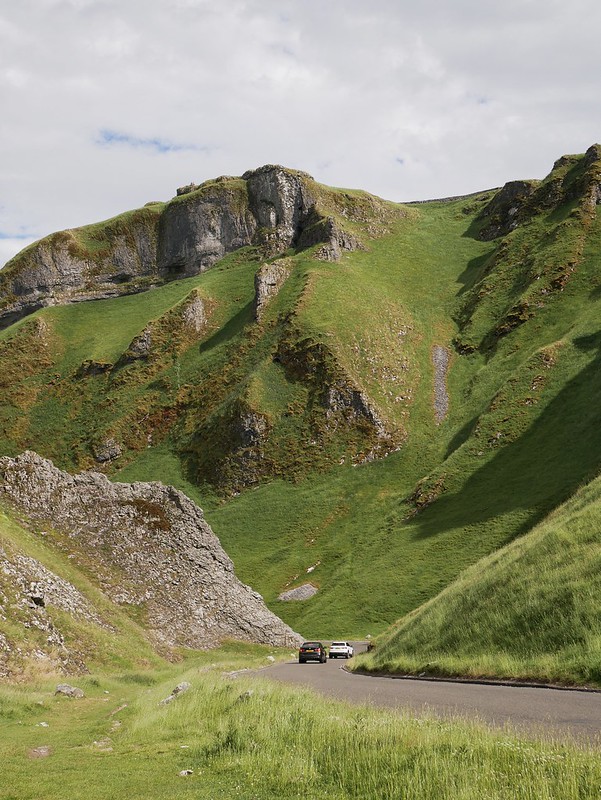 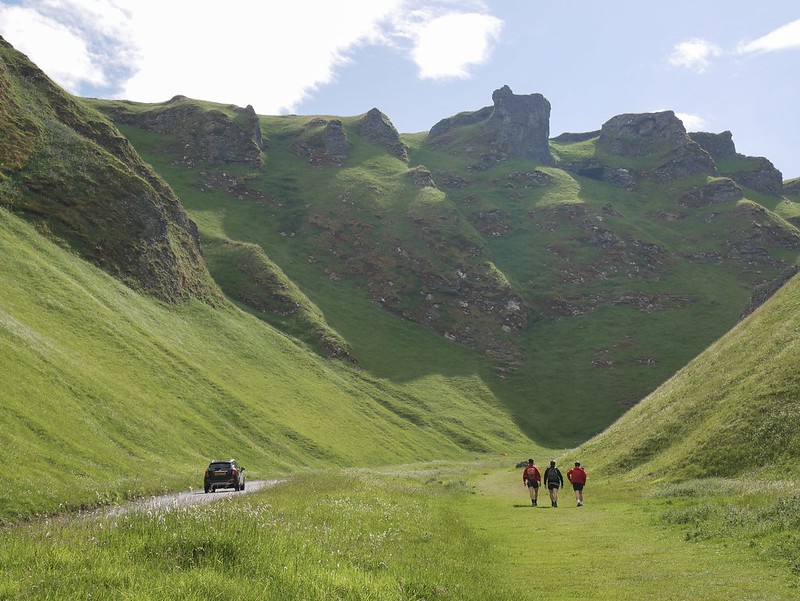 Our final walk in the Peak District was up to Kinder Scout and it was our least favourite one. It was blowing an absolute gale and extremely cloudy so the views were shite. When we reached a pile of rock formations before the summit we decided to just give up and head back. We felt rather conned by the Peak District, a peak to me is a pointy mountain, like the peak you get on a meringue. Instead we were surrounded by hilly countryside, way to get our hopes up with such a grand name. 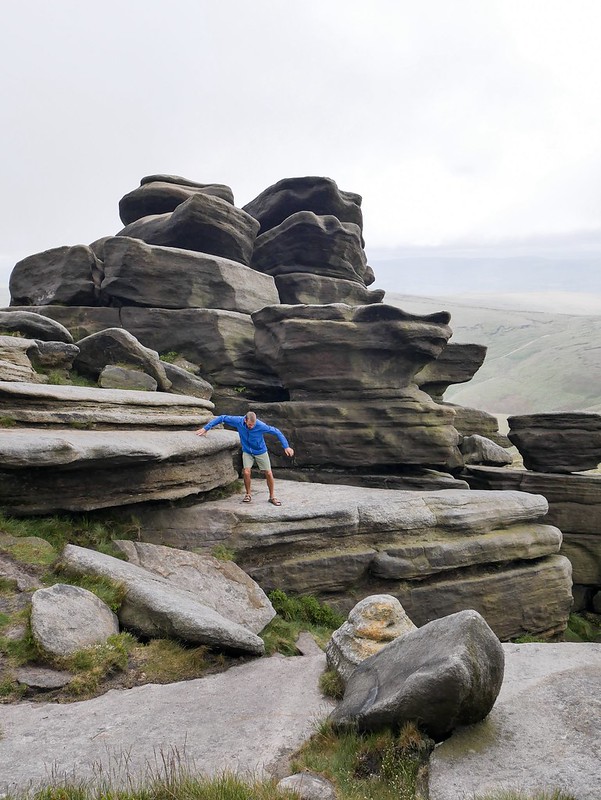