Holy Island was our next pit stop in Anglesey and we headed to the far north west corner to visit the South Stack lighthouse. It’s said to be one of the best places in the UK to witness sea birds, including puffins so I was rather excited. We walked through the countryside to reach the steep cliffs on the coast where people were lined up with their telescopes and fancy cameras. The rocky walls were covered in seagulls and razorbills (a black and white bird that looks a little like a penguin). The walls were stained white from years of poop and the stench in the air was rather grim. We got our binoculars out to try and spot a puffin but it soon started to feel like a lost cause. It was like playing real life ‘Where’s Wally’ looking for a tiny black and white bird, similar to the millions of others except it’s face looks like a clown – there was no chance we were spotting a puffin here! 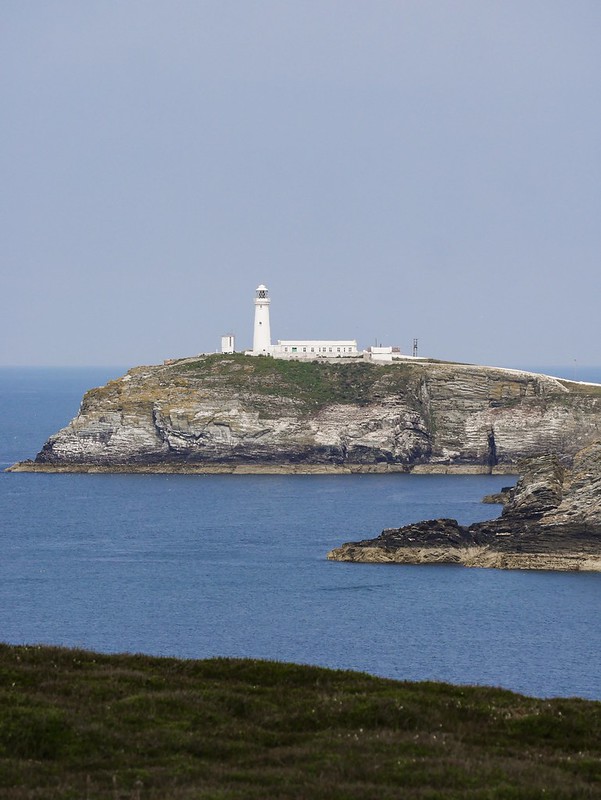 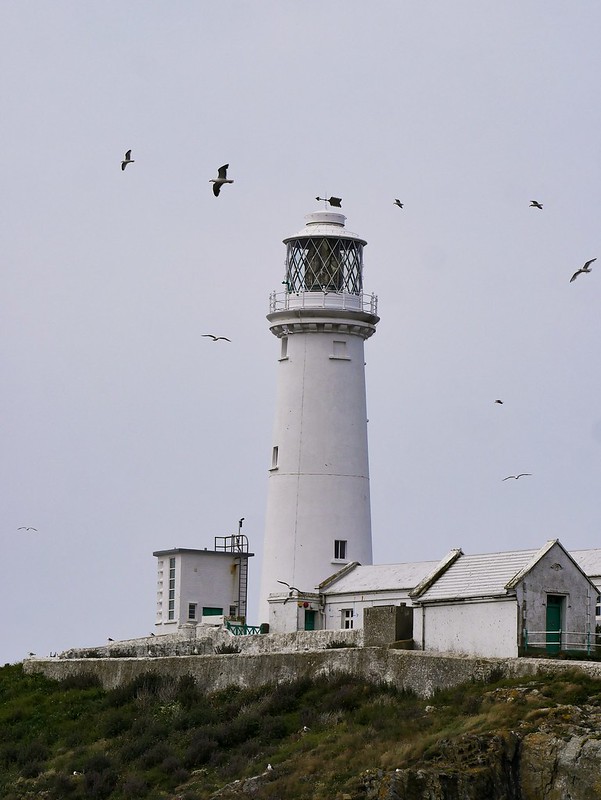 We decided to continue walking to the lighthouse which we reached by going down a ton of steps, only to find there was a locked gate stopping access to the lighthouse. So we sat on some grass beside the steps and had lunch while searching once again for the illusive puffin. 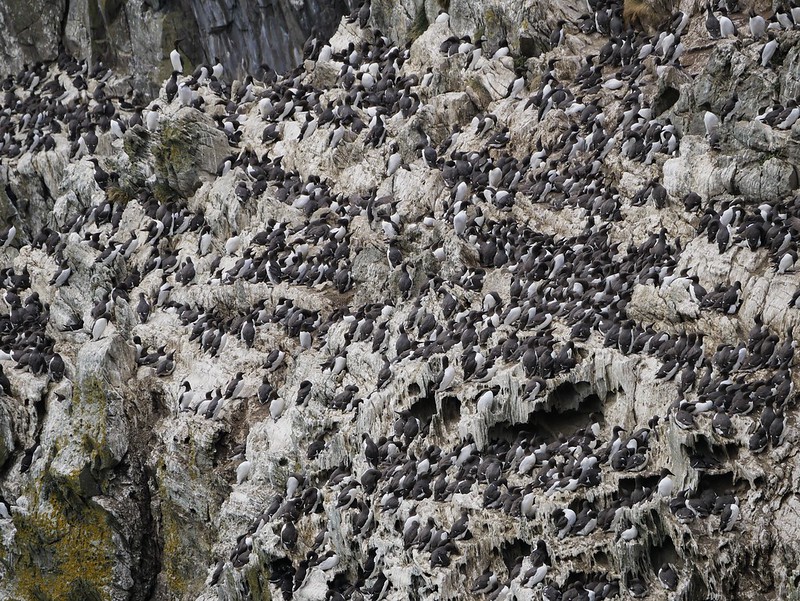 When we headed off we got the impression that it wasn’t an easy area to wild camp so we headed to a fairly well known free camping spot near a military base. We were surprised to see so many vans there, about 15 in total which is the most we’ve camped near, but it was such a huge area that we could all get our own space. We didn’t pick the most scenic of spots however as they all seemed to involve driving over sand and we didn’t trust Helga not to get stuck. 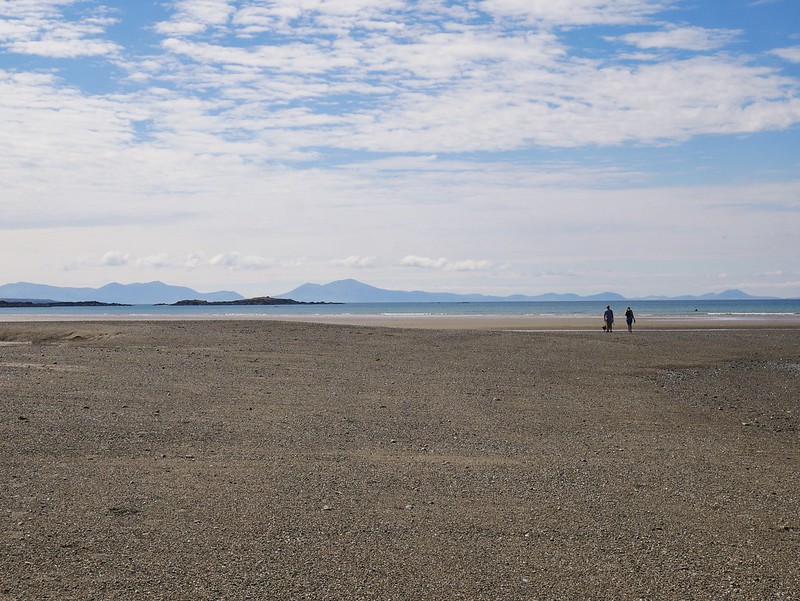 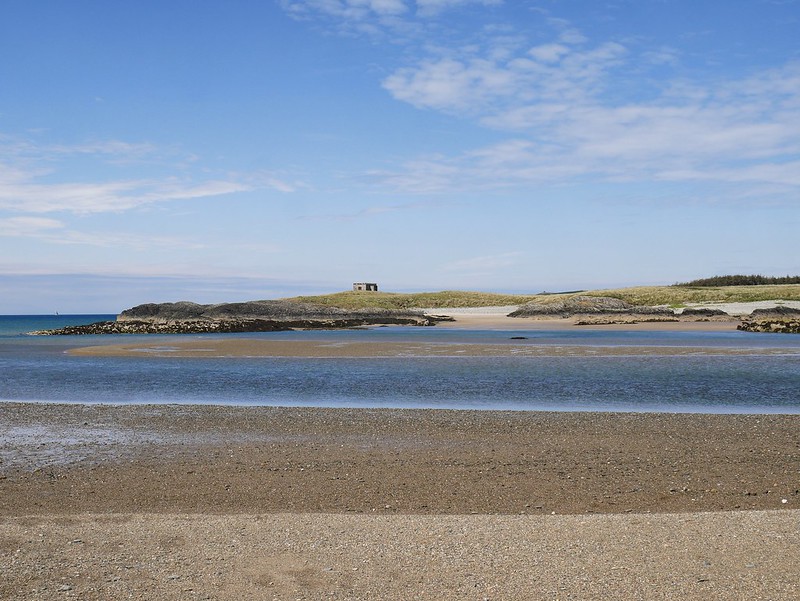 There was a beach right behind us but we waited until sunset to head out and see what it looked like. It turned out to be the most perfect evening; there wasn’t a farts wind so the moody, dark blue clouds filled the sky and reflected in the calm sea. Snowdonia’s peaks lined the horizon and the whole landscape was made up of different shades of blue. 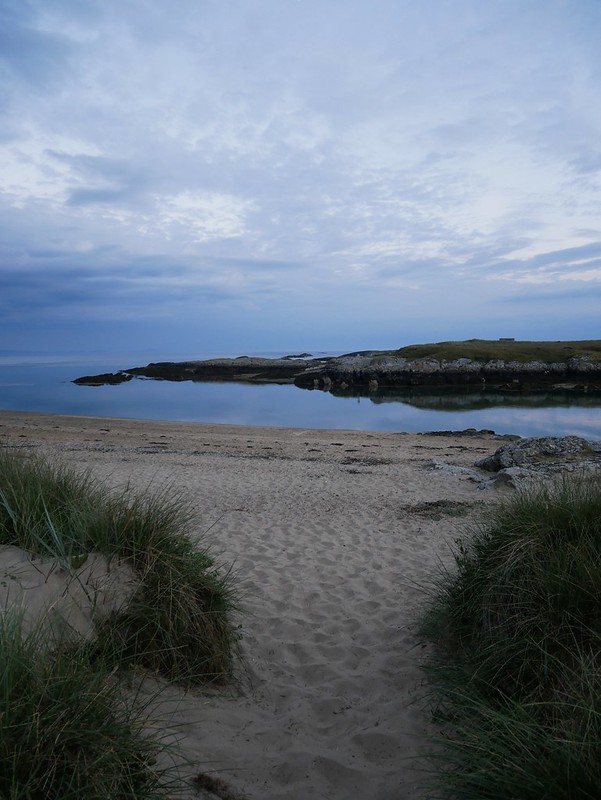 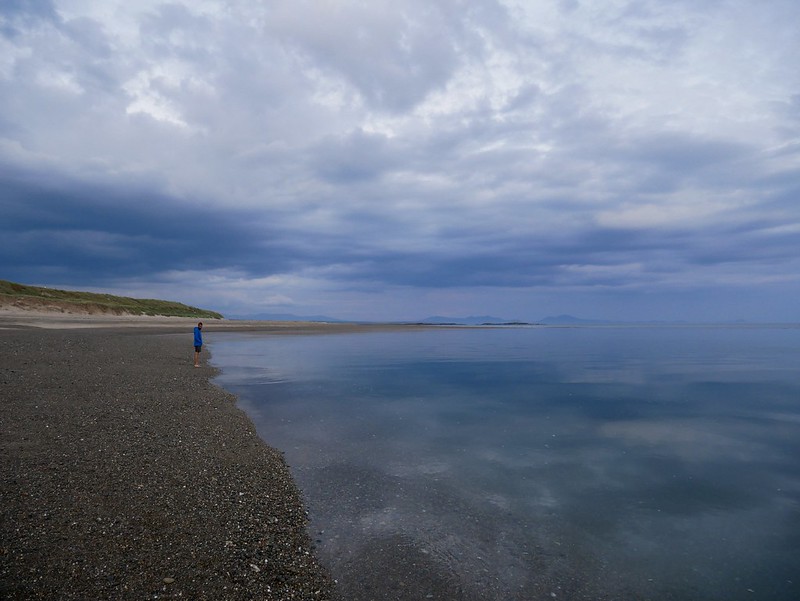 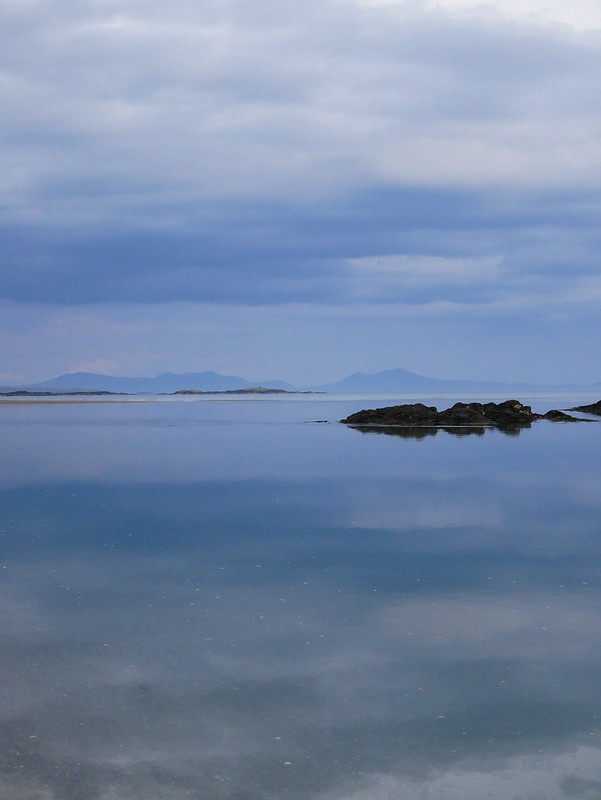 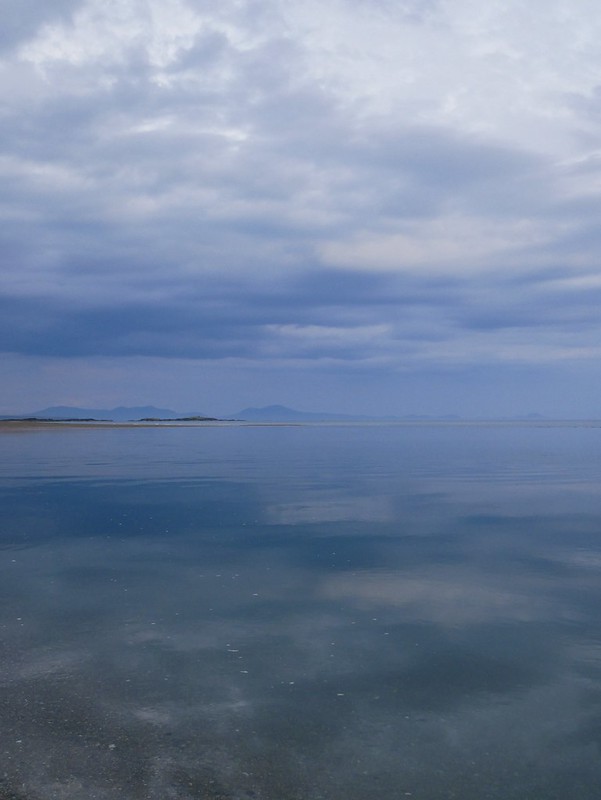 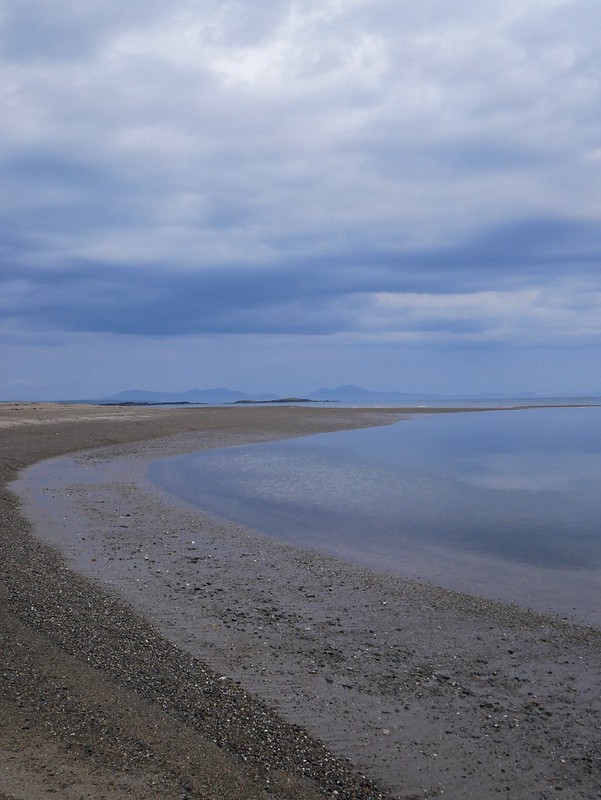 The following morning we headed across the island to visit Porth Wen Brickworks, a disused Victorian brickworks that once produced fire bricks. It was just a short walk to get there but when we arrived we saw a group of people had decided the grassy area in front of the ruins was a good place to wild camp in their tents. It was ridiculous, the middle of the day at a tourist attraction. That pisses me off so much. The rule of wild camping in a tent is to arrived at dark and leave early, that way you’re not an eyesore on the landscape. But these folks didn’t seem to care about that and in the centre of there camping area was an old piece of machinery which was stuffed with rubbish from previous campers. 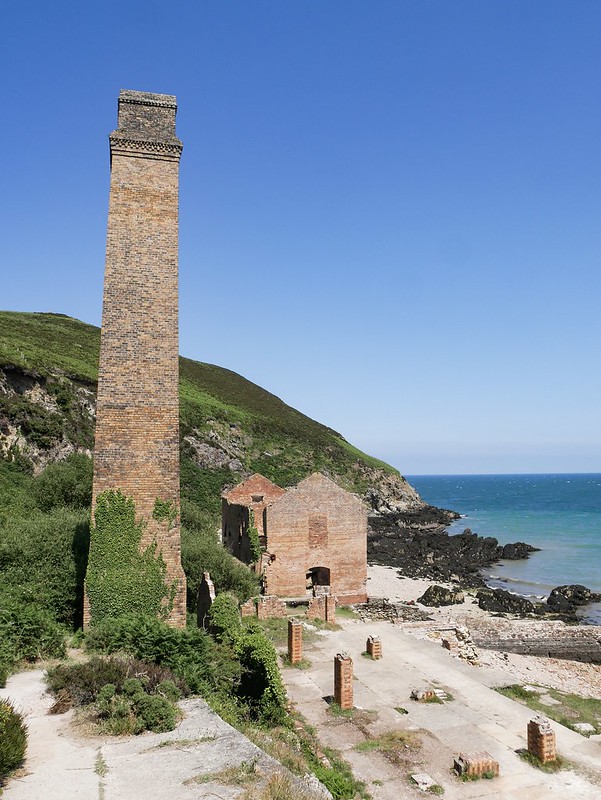 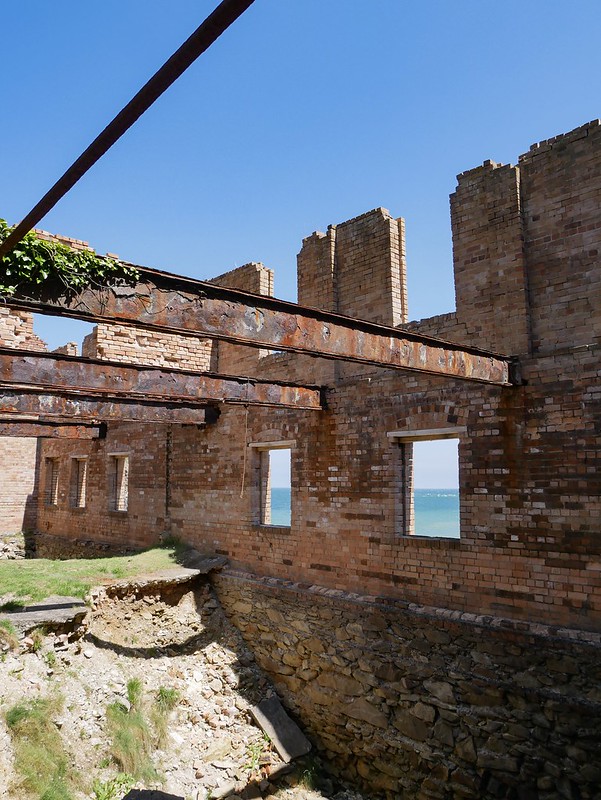 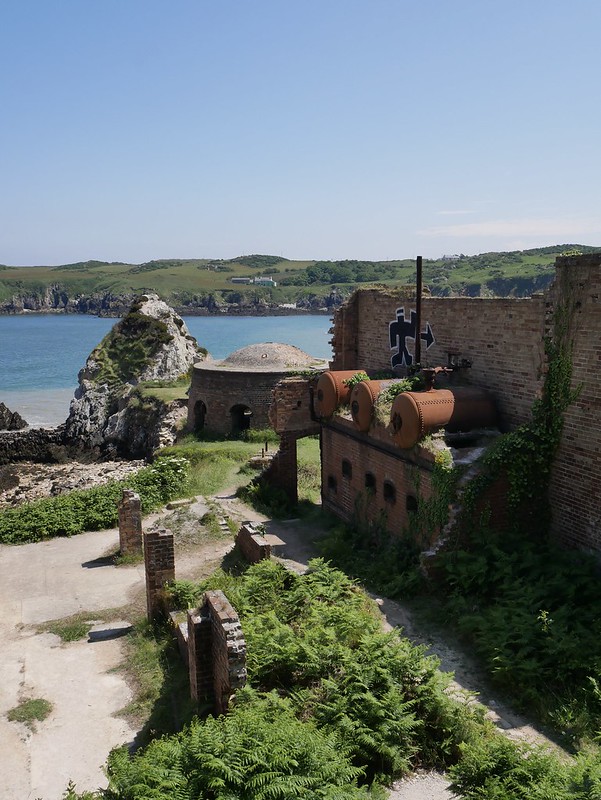 The brickworks were still interesting to walk around though, with a huge brick tower and some other buildings and machinery to explore. One building had holes where the windows used to be and they framed the sea-view perfectly. 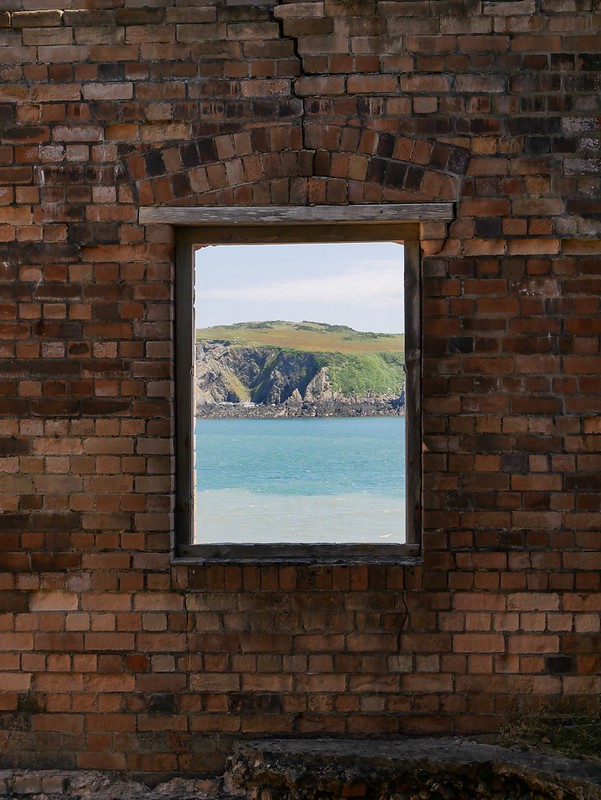 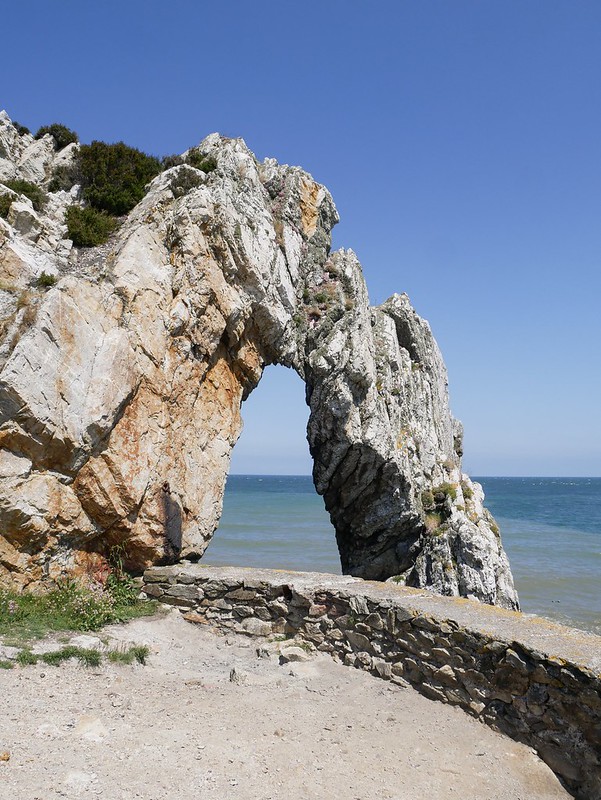 It was a quick sight to explore so we headed back to Helga and made our way to the old Pary’s Mountain Copper Mine. We’ve never seen an abandoned copper mine before and walking onto it literally felt like we had been transported to Mars. It was such a bizarre landscape with mustard yellow hills, pink rubble and burnt orange rocks. 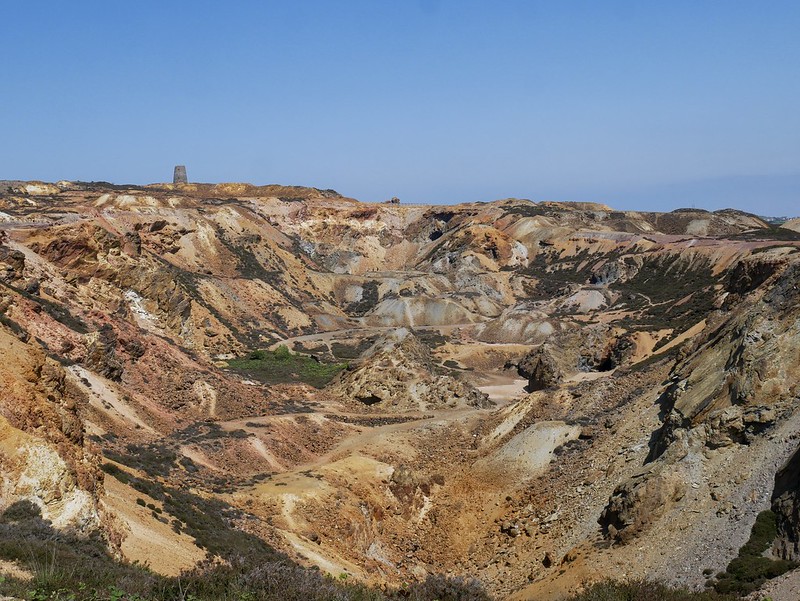 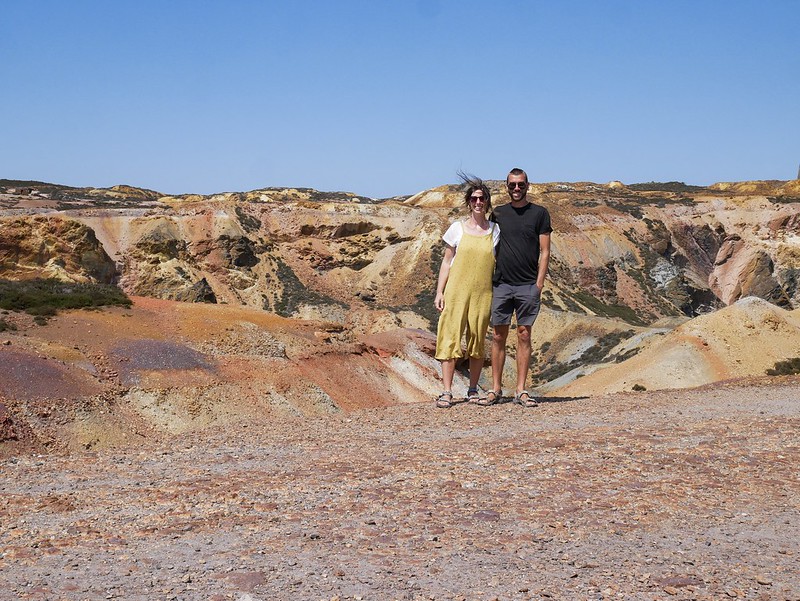 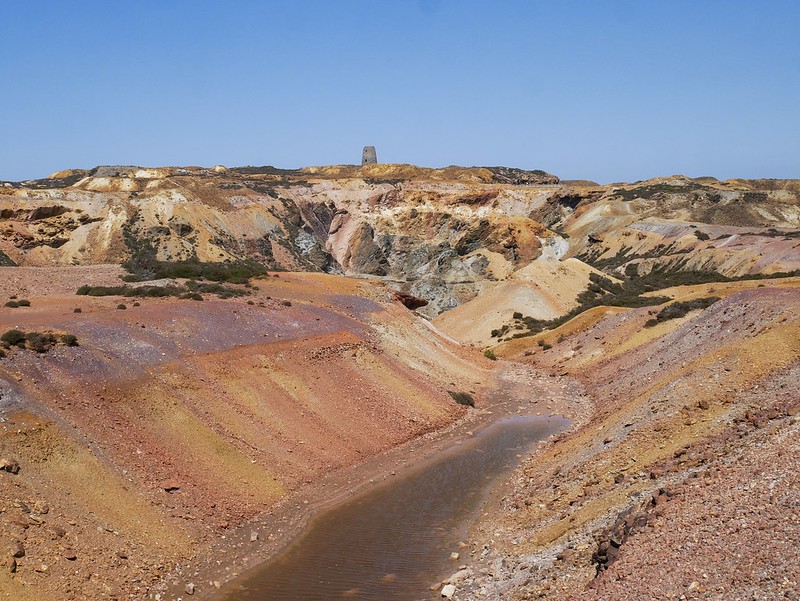 The area has been mined for copper ore since the early Bronze Age, but it was at its peak in the 1780’s when it was the largest mine in Europe and it dominated the world market. One miner who discovered the ‘Great Lode’ was rewarded with a bottle of whiskey and rent free living for the rest of his life. The mine eventually went out of business when the copper lost its value and it wasn’t worth paying the staff to work anymore. 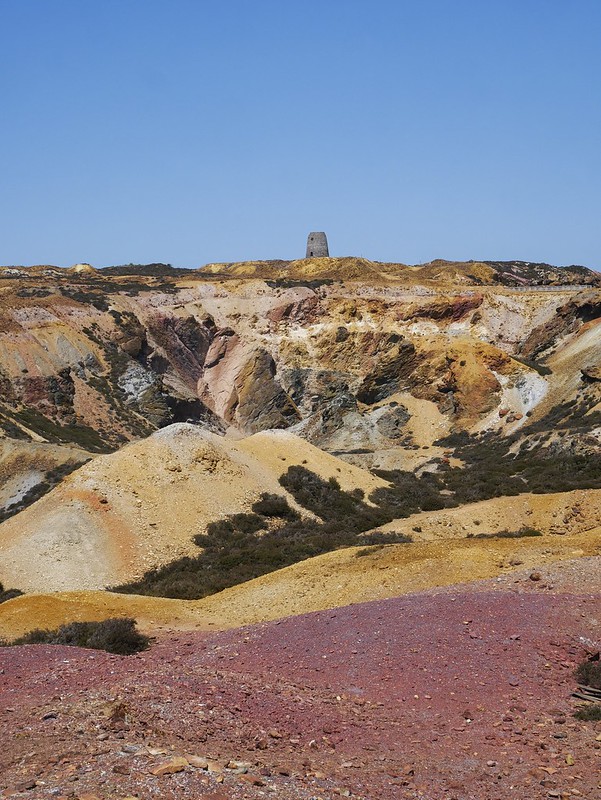 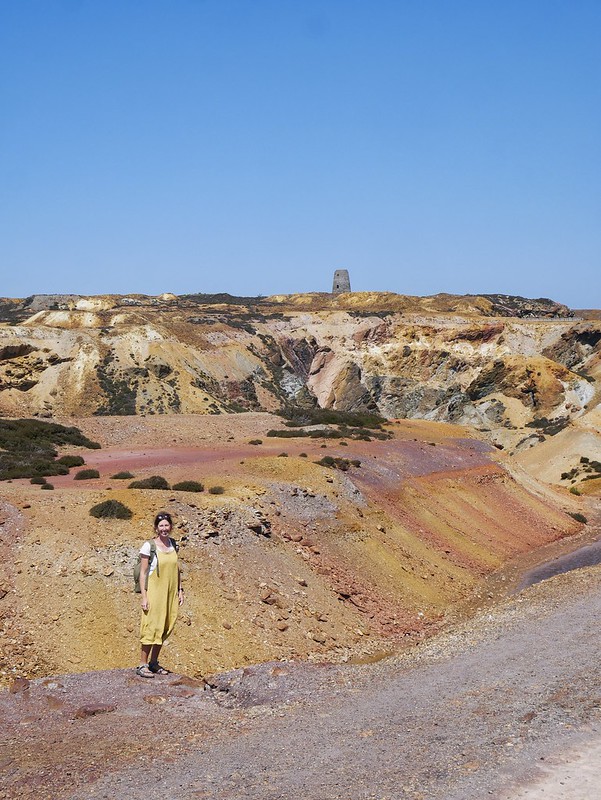 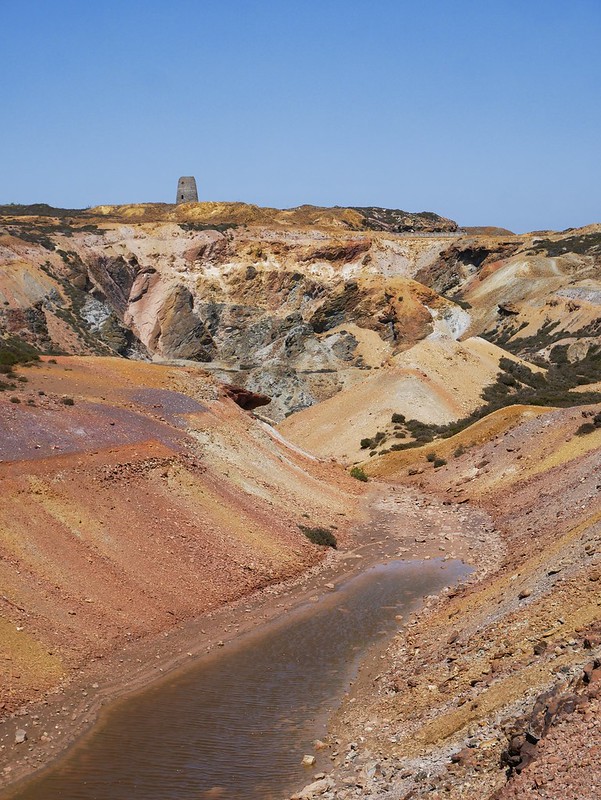 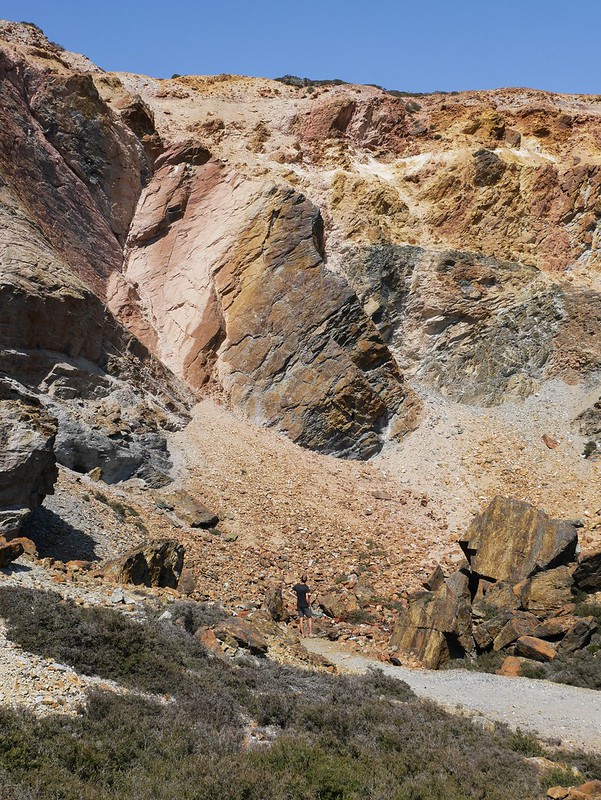 After a lovely little stroll around the mine we were wondering what to do next. We felt like we’d seen enough of Anglesey. Sure there are beaches everywhere to explore but it’s summer so all the carparks were chocker full and we hate busy places, so we decided it was time to make our way east, back to England after a full month in Wales. We couldn’t drive past beautiful Snowdonia without stopping so we pulled up at one of our favourite lakes and enjoyed a refreshing dip, boy did it feel good to be back in the mountains. 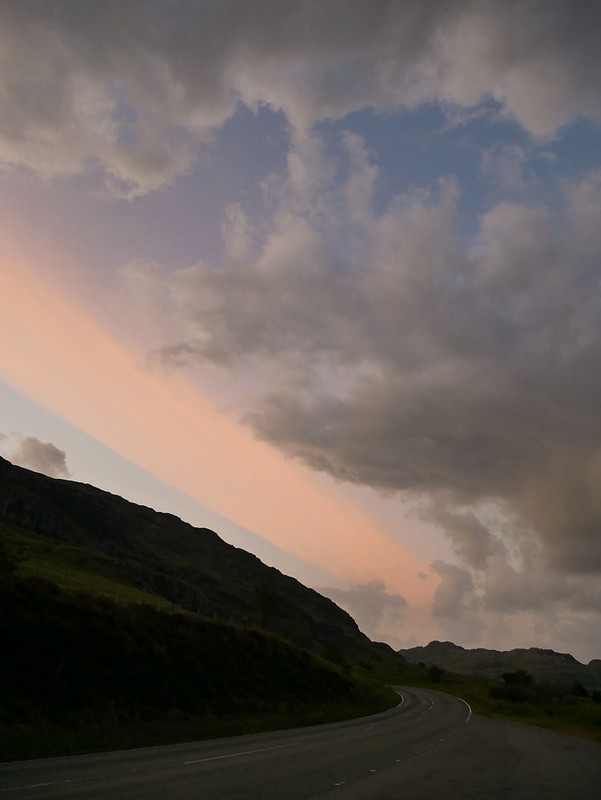 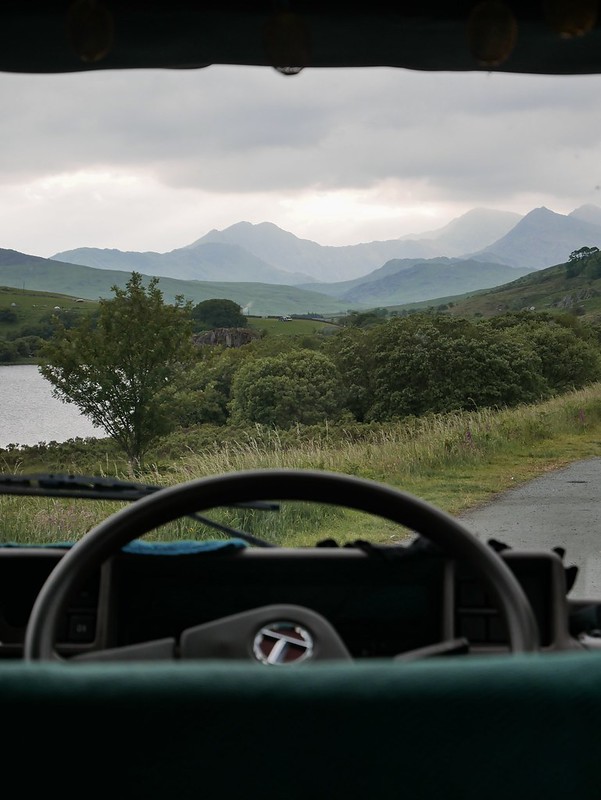 The following morning we made our way east which was a bit depressing; it’s a horrible feeling seeing the mountains shrink to hills and the rugged ground become farmland and towns. We eventually arrived at Pontcysyllte which is home to an aqueduct. It’s the first one we’ve ever seen so I was quite excited, it’s basically like a big brick viaduct used for trains, but this one is used for narrowboats so it has water in it! Pretty cool! It was opened in 1805 and is now on the UNESCO world heritage list which makes it as important as the Taj Mahal.

It was only 3.6m wide with a 307m long trough filled with water for the boats to navigate their way through. Apparently the aqueduct was 39m above the River Dee but it felt much higher in person. There was an extremely narrow path we could walk along but it was quite tricky passing people, especially with covid. The canal boats didn’t have much more space, they had pedestrians walking beside them on one side and a little concrete wall with a sheer drop on the other. You wouldn’t think vertigo would be a problem while travelling around in a narrow boat but it would be here. 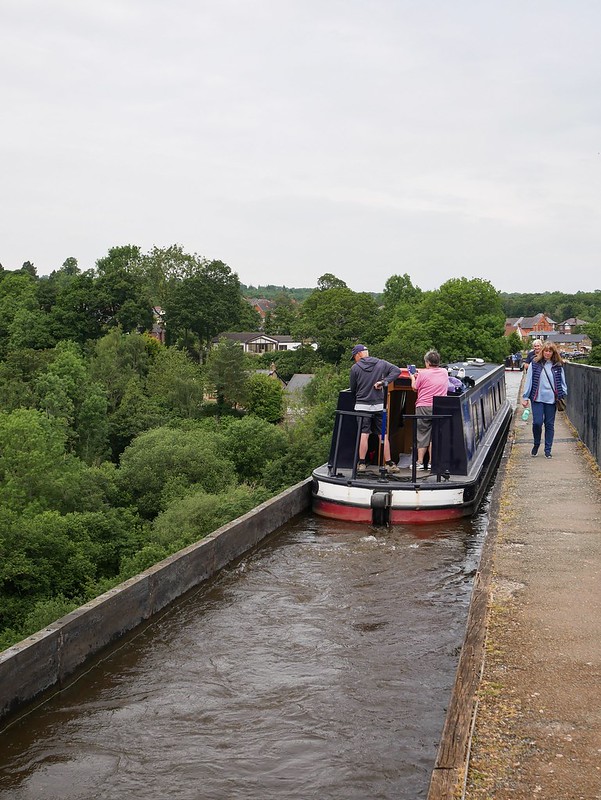 After walking along the aqueduct we headed down the valley to get a different vantage point. We ended up right down by the river where we took a few snaps and then made our way back to Helga and said our farewells to Wales. 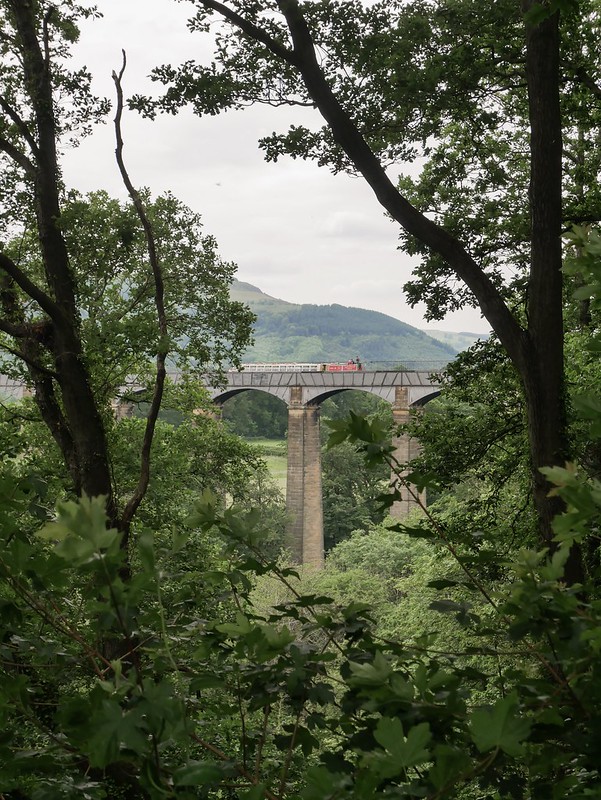 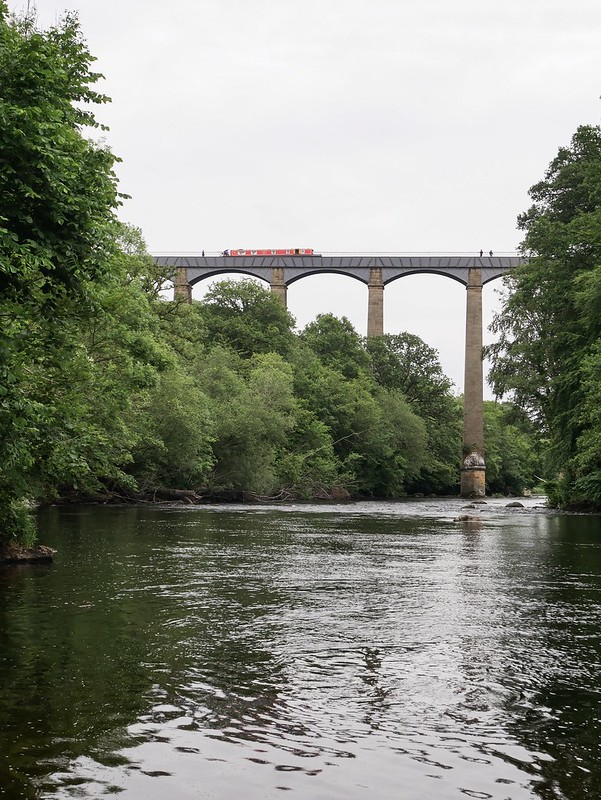