We didn’t arrive into the Dales until the late afternoon. It was the weekend and we went to one of the busiest spots of the park at Malham Cove. The main hike here has been named one of England’s top 10 hikes so it’s no wonder it was busy on a sunny weekend. We began by walking to the small waterfall of Janet’s Foss which was a big disappointment as the tiny pool below it was full of kids in inflatable lilos and to our surprise even a kayak!! Which was ridiculous because the pool was only about 5m wide. Anyway, we had plenty more to see and our trail led us up a gorge until we were met with a rocky wall in front and waterfalls pouring down it. I’d read you could climb up the rock face so that’s exactly what we did. Remarkably after the wild hikes we did in Wales I felt more giddy going up this wall then the razor sharp ridge lines. I think I just chose a bit of a precarious route as I tried a different spot and it was easy I’ll accomplished. We arrived at a sort of second floor of the gorge, with a waterfall trickling through a mossy covered rock. Eventually we made it above the gorge where we had views of the rolling pastures and neat dry stone walls around us. It didn’t take much longer to reach the main focus of this hike, Malham Cove, a vertical limestone wall about 260ft high. 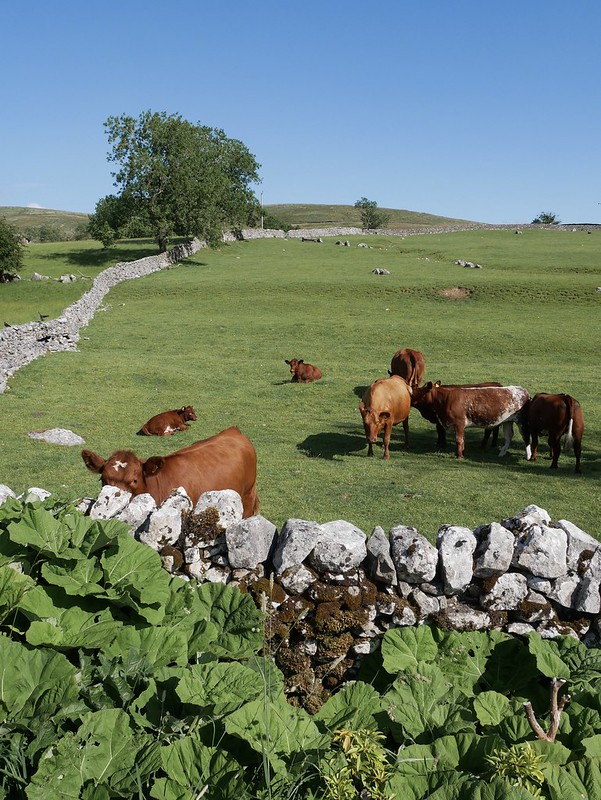 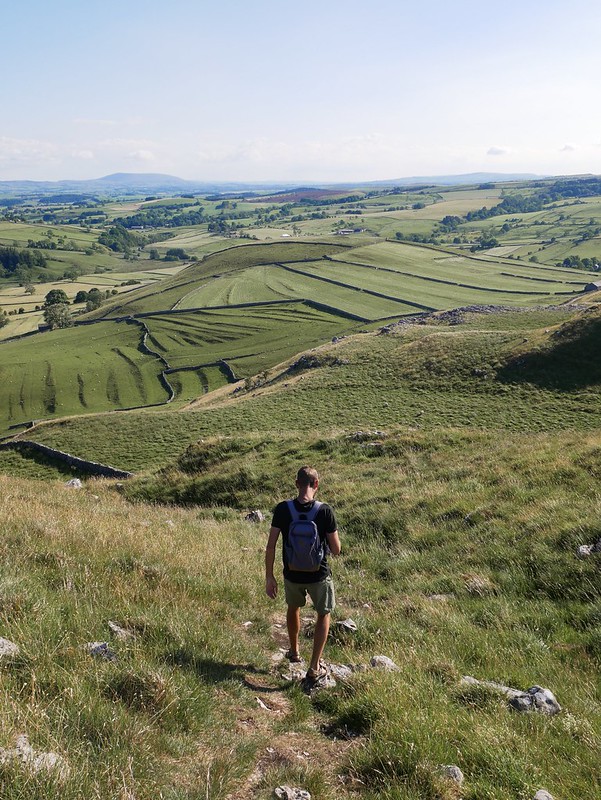 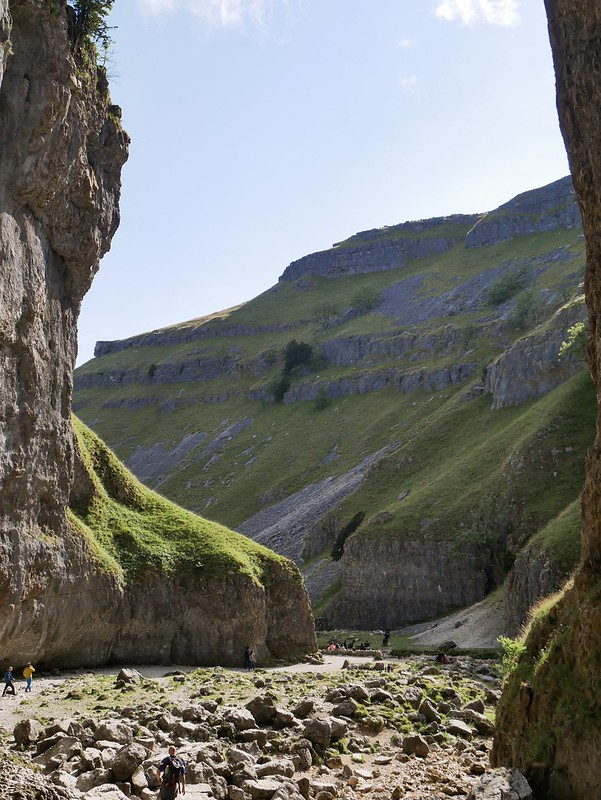 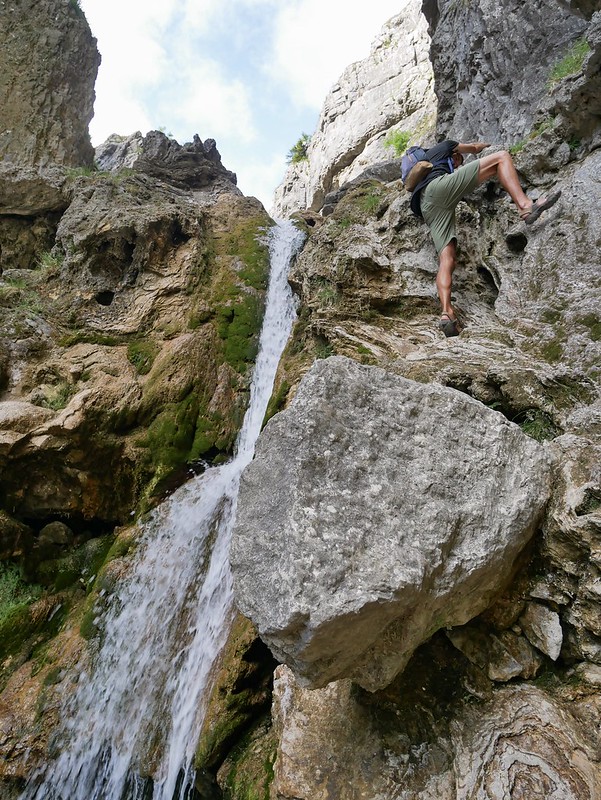 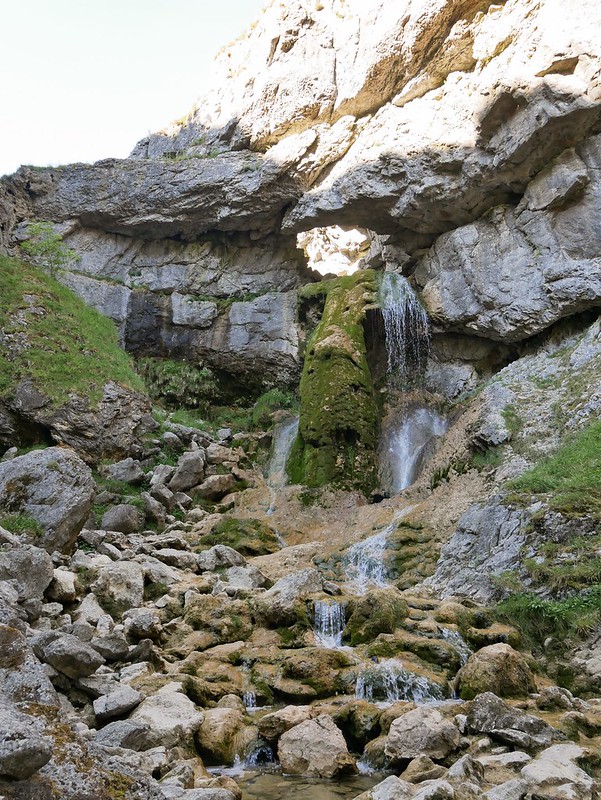 We noticed a few photographers with zoom lenses and then saw why they were there – a couple of Peregrine falcons were nesting in the rocky wall. They were squawking and making a right racket which probably wasn’t wise as it gave away their location very easily. 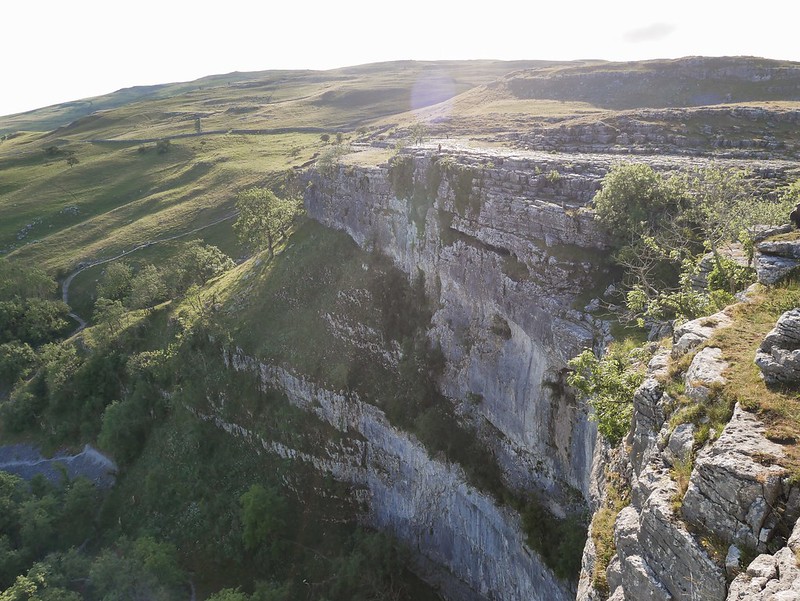 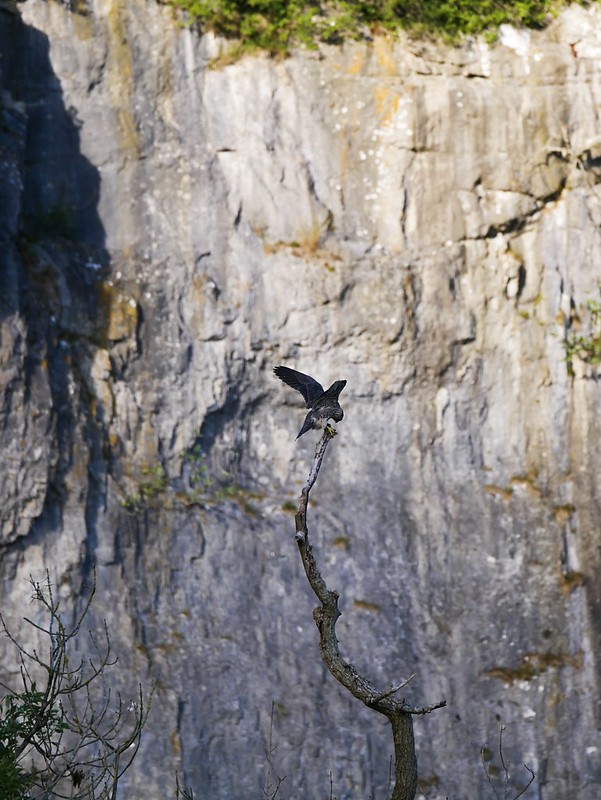 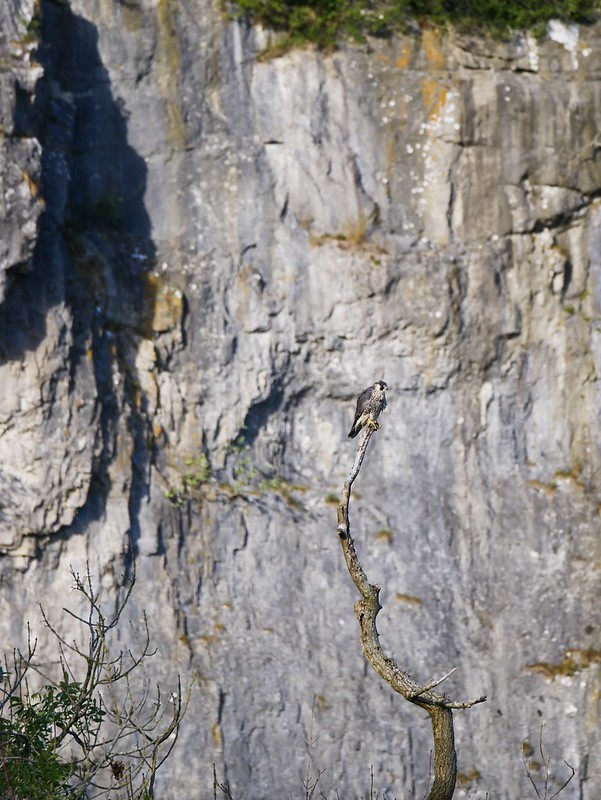 By the time we got back to Helga it was 7pm and we desperately wanted a shower after such a hot day. We’d spotted a free water tap outside the toilets so we decided to treat ourselves to a nice hot shower before finding a spot to have dinner and sleep. 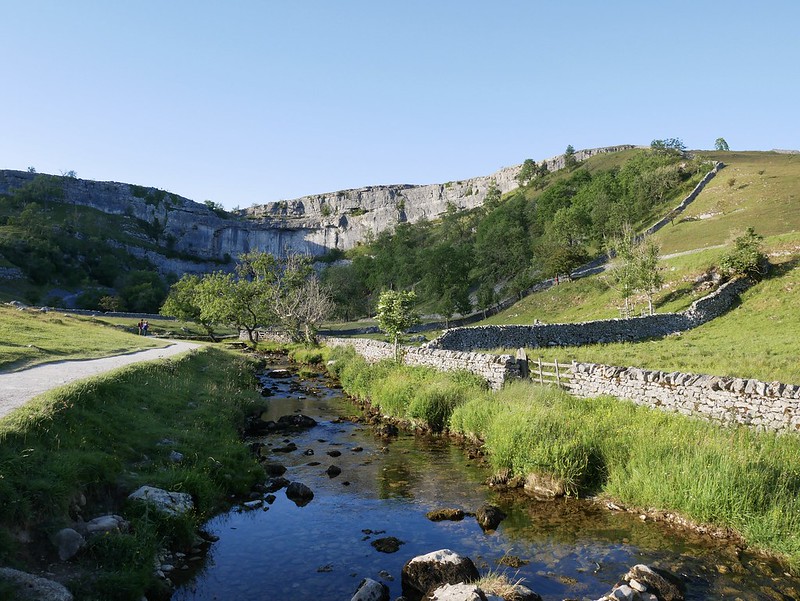 The following day we wanted to check out Bolton Priory, a 12th century monastery that now sits in ruins. It’s privately owned and the parking fee was extortionate so instead of paying we drove 5km further and parked for free at Barden Bridge. A trail led us along the River Wharfe which was lovely and peaceful until the final section when we neared the priory and there were families everywhere. I barely wanted to take a photo as it was so overrun with people. There were stepping stones across the river with a queue of people waiting while parents carefully tried to navigate their kids along the precarious stones. 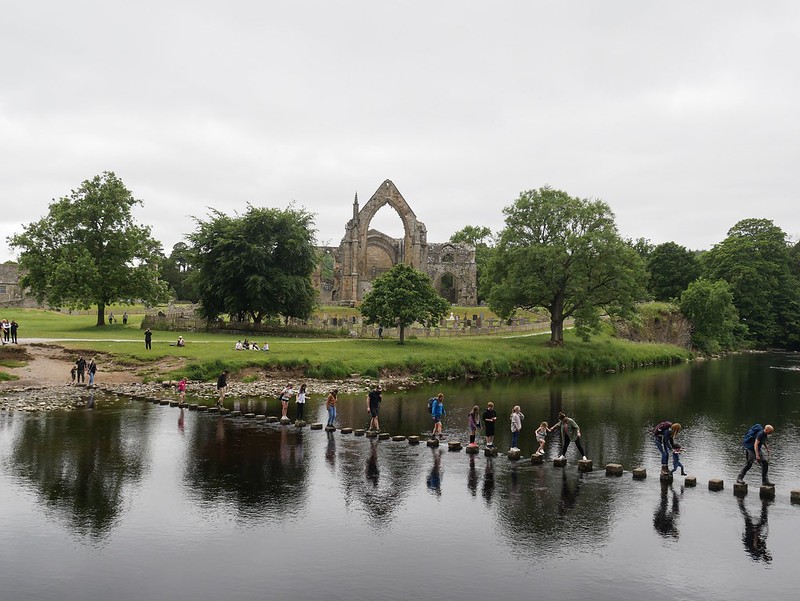 We slept in an old quarry area and woke to an absolute scorcher of a day so we decided to head to a really nice river spot we’d seen the day before and have a proper relax day. On Sunday afternoon there were about 10 other vehicles in the grassy parking area but today, on a quiet Monday it was just us. The river area is owned by a local farmer who came along to collect our £3 to park there for the day. It was a hidden gem so well worth the money as the main river is full of people. It was quite a shallow river but one area had a perfect pool about 2m deep with a rope swing and gravelly beach. The water was crystal clear so we were very happy with our decision to pitch up and finally have a day off hiking. 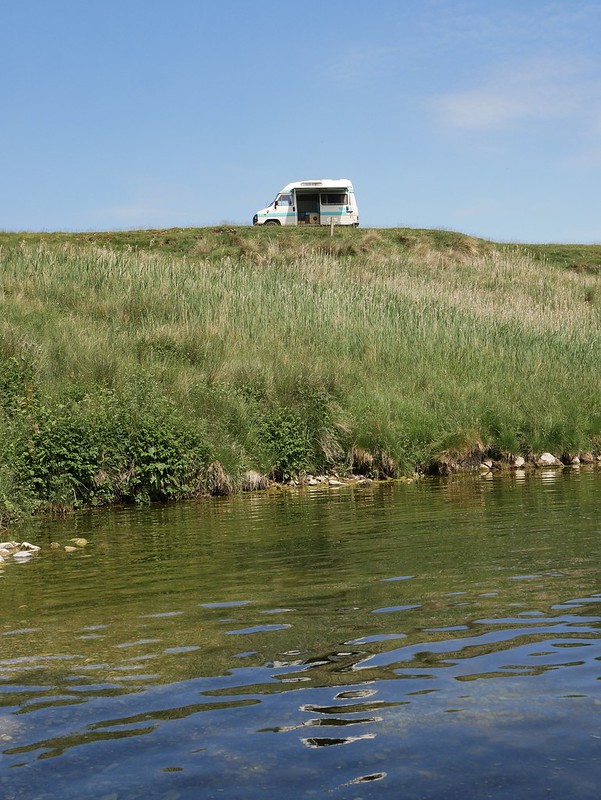 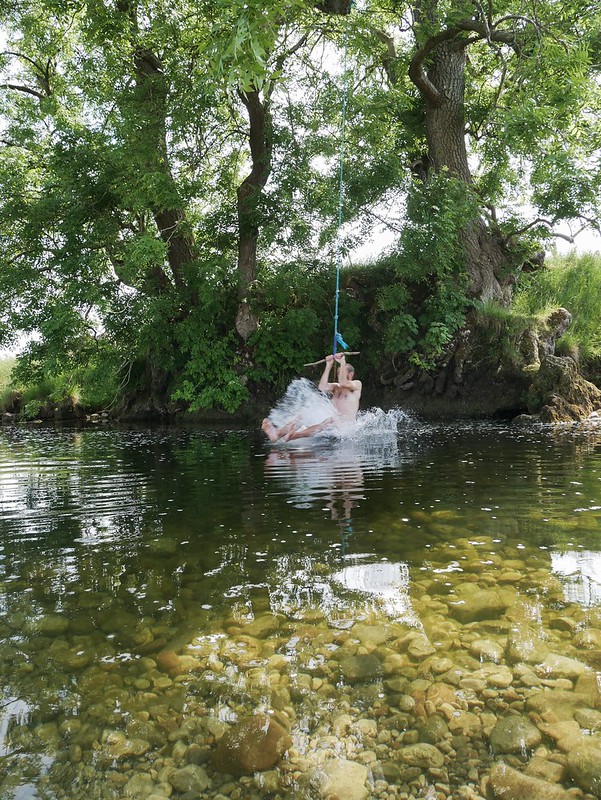 That evening we camped in a layby with a fab view of the countryside. Considering it was a rather cloudy, overcast evening we were treated to a fabulous sunset. The whole sky seemed to turn pink, the only problem was the area was full of midges. I braved going outside to take some photos and I must’ve been quite a sight… I took a few photos in one spot and then had to run away to try and fool the midges until they found me and I’d dart off again. When I wanted to get back into Helga I had to be really strategic and run circles at the far end of the layby before sprinting to the van and slamming the door shut behind me. Even still hundreds managed to make their way inside. 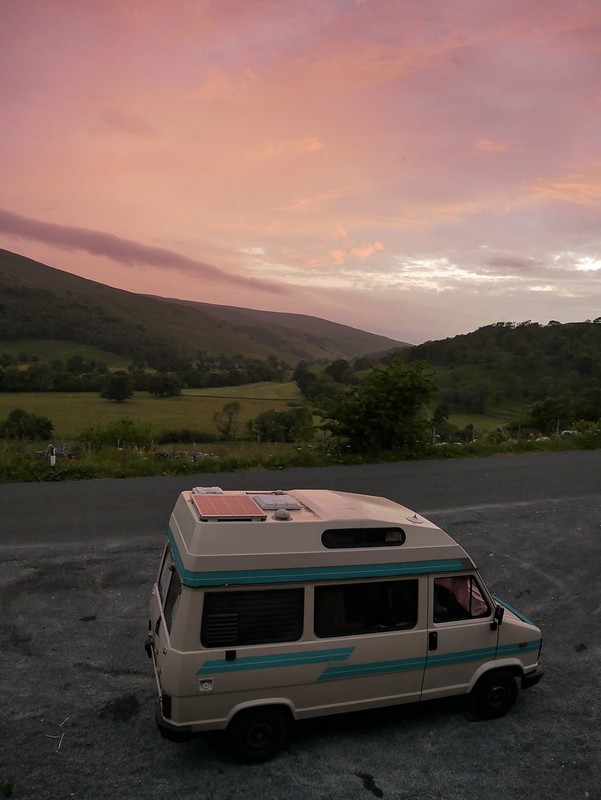 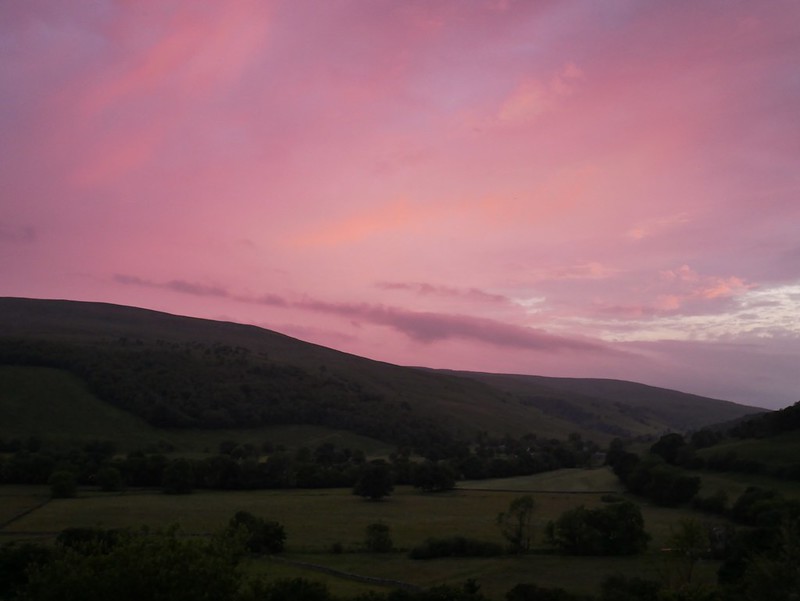 The small village of Aysgarth is well known for its waterfalls which gush down the river Ure. It was another sweltering hot day so we were more interested in finding a spot to swim rather than checking out the main sights. The lowest waterfall was by far the most impressive though, and certainly something I didn’t expect to find in Yorkshire. We climbed down a rock wall to get below the falls where the river was a couple of feet deep and just about swimmable. It was a lovely spot and we had fun standing under the falls and getting a back massage. Craig was sitting on the rocky floor in the shallows when he suddenly realised he was covered in tiny black worms!! I’d had the same things happen to me in a Welsh river but this time it was only on Craig. We realised they must live on the rocks as I was fine under the waterfall and only had a couple on my feet. 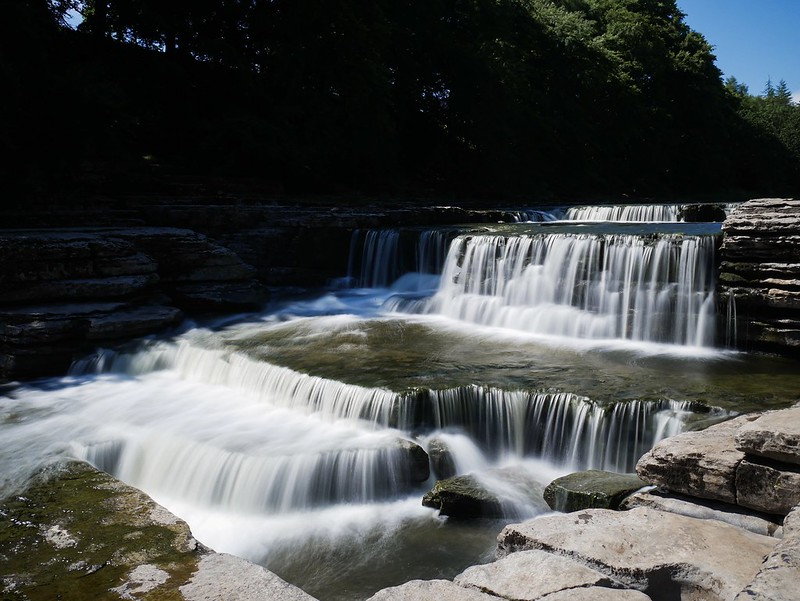 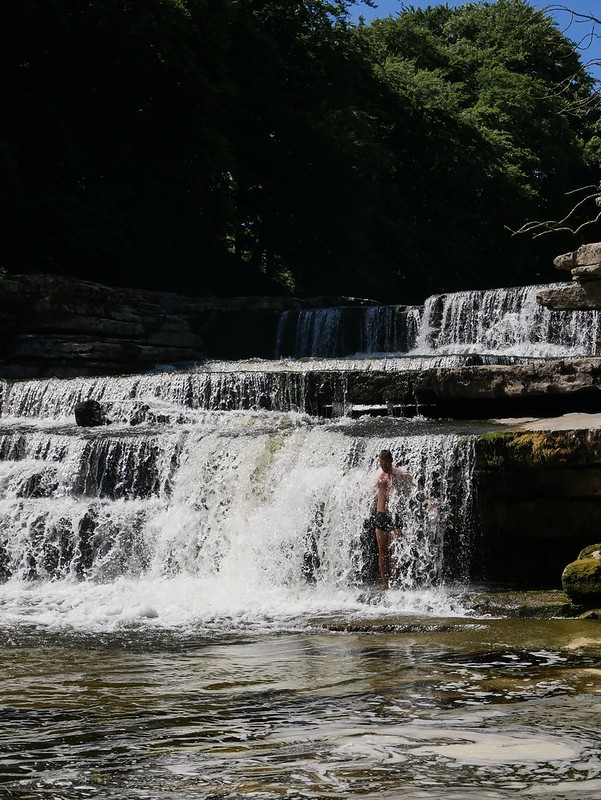 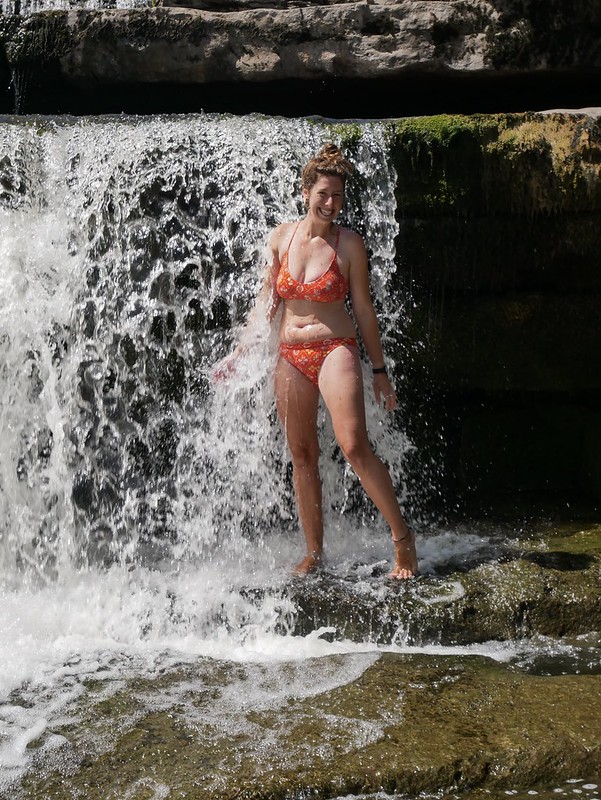 We then continued the roadtrip by heading towards Hawes, home to the Wensleydale Cheese factory. But we didn’t plan on visiting, we figured free cheese samples wouldn’t be around during covid and that was pretty much the only reason we wanted to stop. So we boycotted the busy town and headed back into the countryside via the Buttertub Pass.

Jeremy clarkson described the Buttertub Pass as ‘England’s only truly spectacular road’ so we were excited to check it out. When we were almost at the top we spotted a large pullout with an incredible view of the surrounding hills. It was too nice of a spot to say no to so we decided to stay the night there – it wasn’t even lunch time yet! Seeing as we had the whole afternoon free we headed off towards a small river on my map. We didn’t know if it would be deep enough to dip in but it gave us a goal to reach at least. Soon after started we crossed a dry river bed which was full of these bizarre rocks that literally looked exactly like honeycomb. I felt like I was in Charlie And The Chocolate Factory where everything I was seeing was edible. 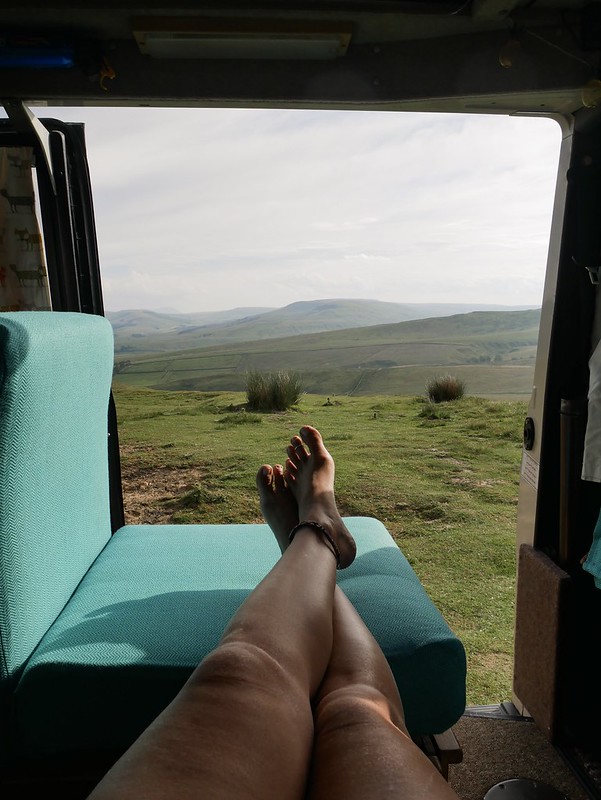 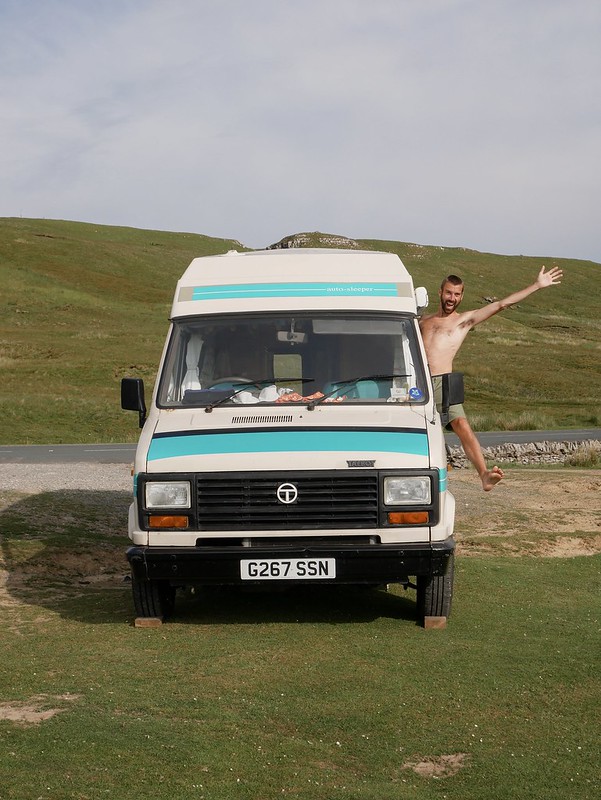 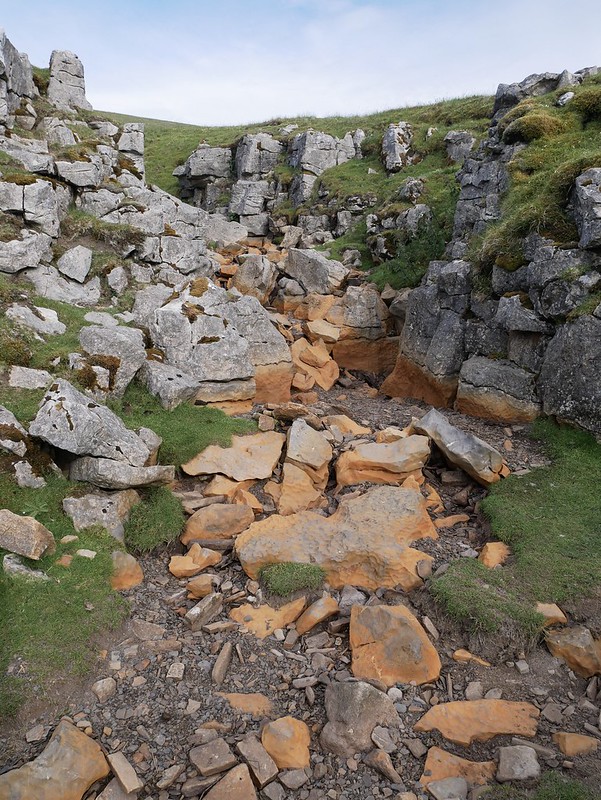 We spotted a dead rabbit on the dirt track, and then another and another. We counted over 30 dead rabbits on the hike. I don’t know if their being poisoned or shot. There was clearly quite a problem with the rabbit population as they were taking over the area, but I sure hope their not using poison otherwise the birds that eat the carcasses will also die.

The river was anticlimactic. Barely deep enough to submerge our bodies and full of a variety of creepy swimming bugs that we weren’t keen on sharing the water with. We enjoyed dinner back at Helga with a wonderful view and the traffic, which was never much anyway, dwindled down to nothing. We were treated to our second night in a row with a beautiful sunset; big amber coloured clouds hovered above Helga and they gradually turned an intense pink colour. It was stunning and thankfully the midges weren’t too bad here so I spent ages outside taking photos like Helga was a celebrity on a catwalk. 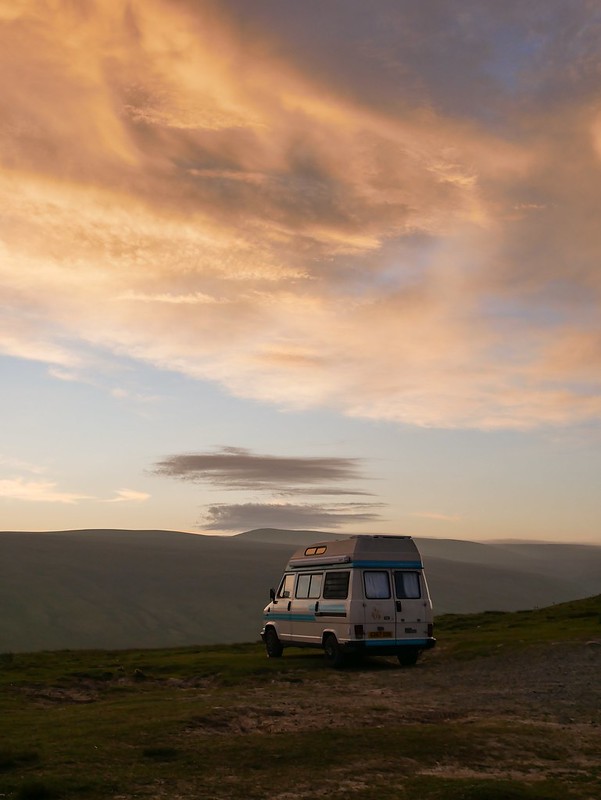 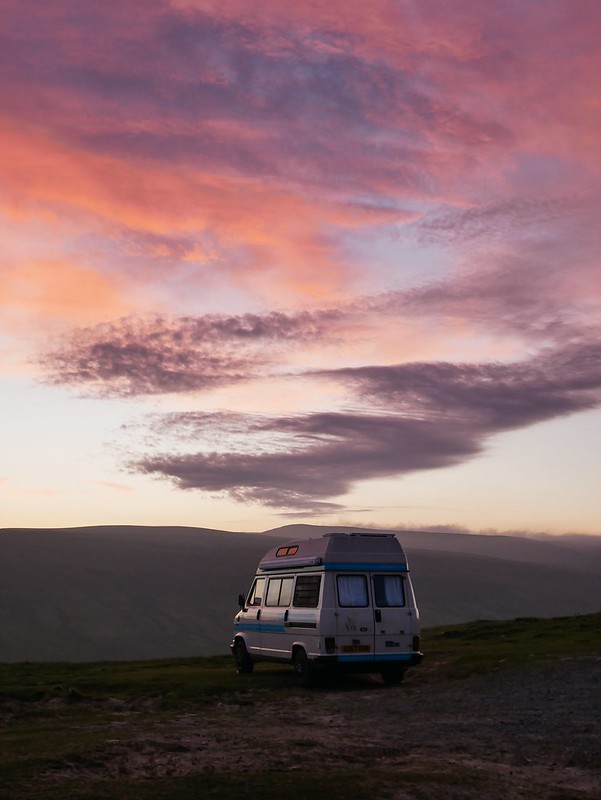 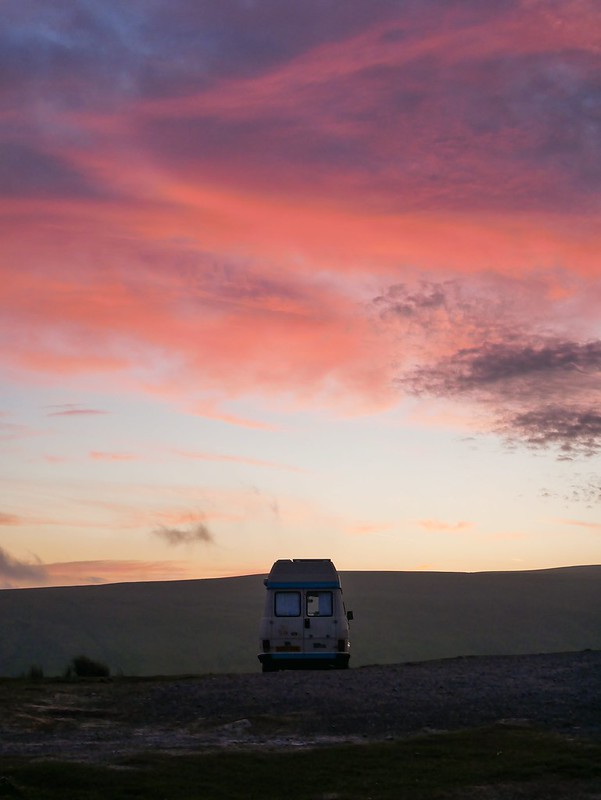 After some breakfast the following day we made our way down the Buttertub Pass. It was a really beautiful route, winding up and down hills with just a guard rail between us and steep drops. When we parked up in village ready for a hike a jolly chap said hello to us and asked how we slept on the pass lastnight as he recognised our van when he drove by the previous day. We were very surprised when he asked if we get scared of the noises camping in places like that. We were so confused…camping in a place that tranquil and quiet in nature is our idea of heaven. Our biggest fear while camping is humans. 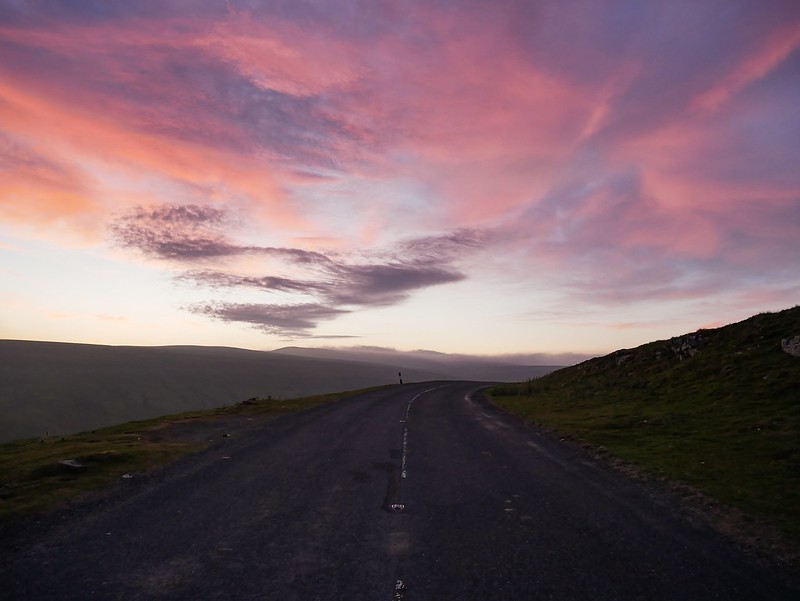 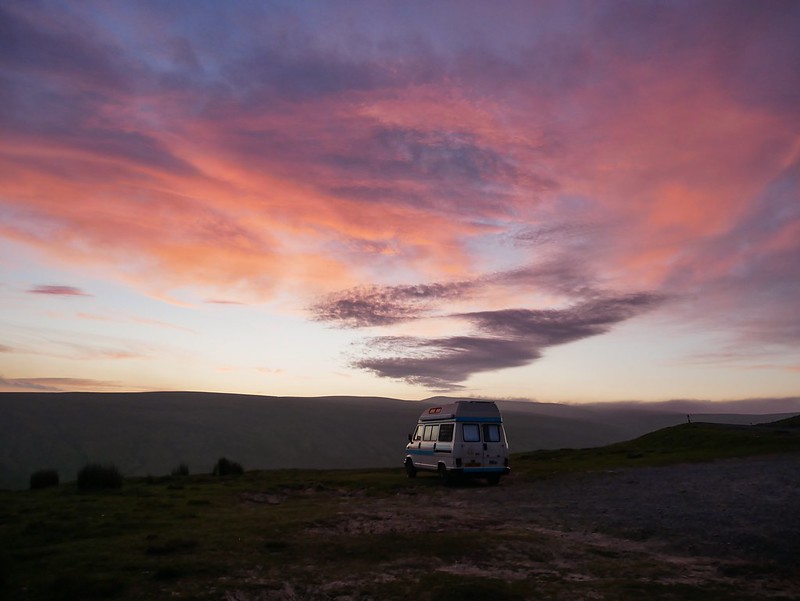