Social media has been smothered with videos of people swimming in a ‘secret infinity pool’ in Snowdonia. The location is kept a secret but it’s easy enough to find if you watch the videos and scan google earth. Seeing as we swim in wild locations pretty much every day we figured we’d see what all the fuss was about. We pulled up in a lay-by and followed a track uphill, it didn’t take long to reach which made the videos I watched seem hilarious as people were huffing and puffing as if it was the toughest hike they’d ever been on. In reality it was just a 5-10 minutes walk uphill. 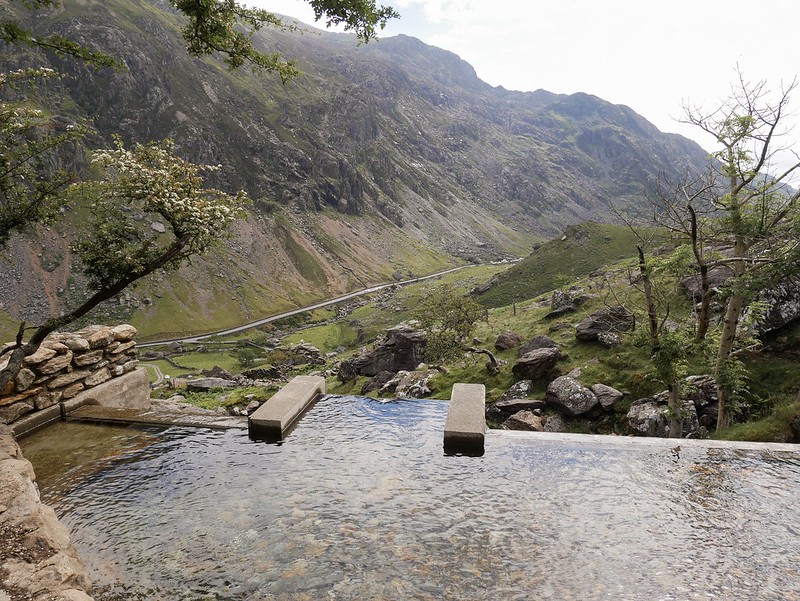 Just before we reached the pool we were greeted by two very clear signs saying ‘please note that this pool is a private water supply to the properties below therefore no bathing is allowed’ with an image in the centre of a swimmer and a big red cross through it. So that was a shame but also an eye opener because there’s been so many ‘influencers’ who have recently advertised swimming in this pool and would rather gain likes and followers than respect the farmers wishes on private land. 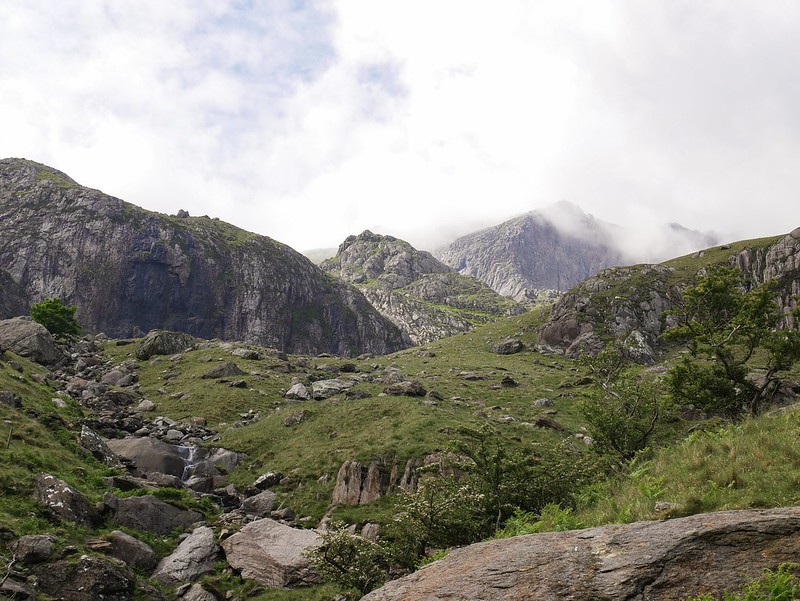 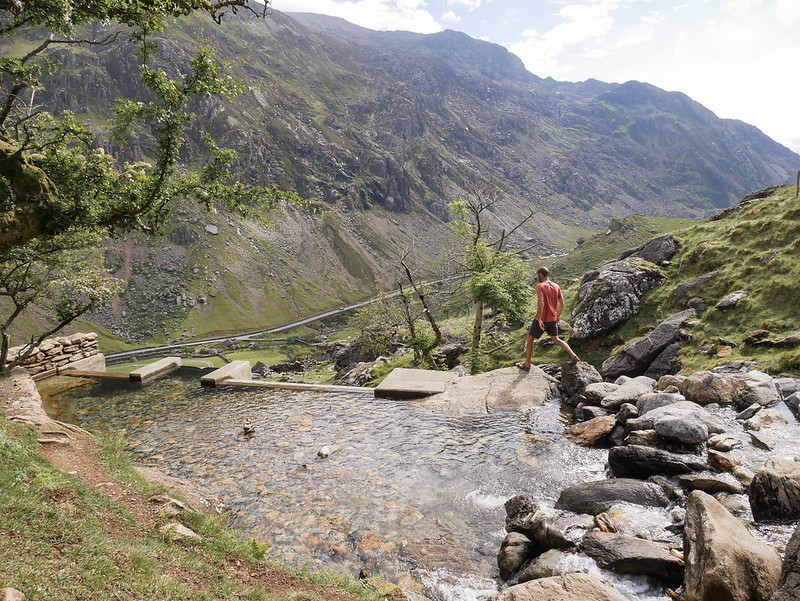 There was a news article about the pool a while back with the farmer saying he was happy for people to use it but he doesn’t like how it’s become a hub for late night parties. But he’s obviously changed his mind now that it’s gaining popularity and banned swimming which I totally get. So we checked out the pool anyway, and yes it was beautifully clear with an amazing view of the mountains. But it didn’t bother us that we couldn’t swim in it because there are rivers and lakes all over Snowdonia which we can swim in without pissing off the locals. It didn’t take long for us to find an idyllic swimming hole in a river with our own mountain view. The water was crystal clear and there was a perfect seat-shaped dip on the rocky edge to sit in and relax. Who needs a manmade infinity pool when you can find a natural pool like this ay? 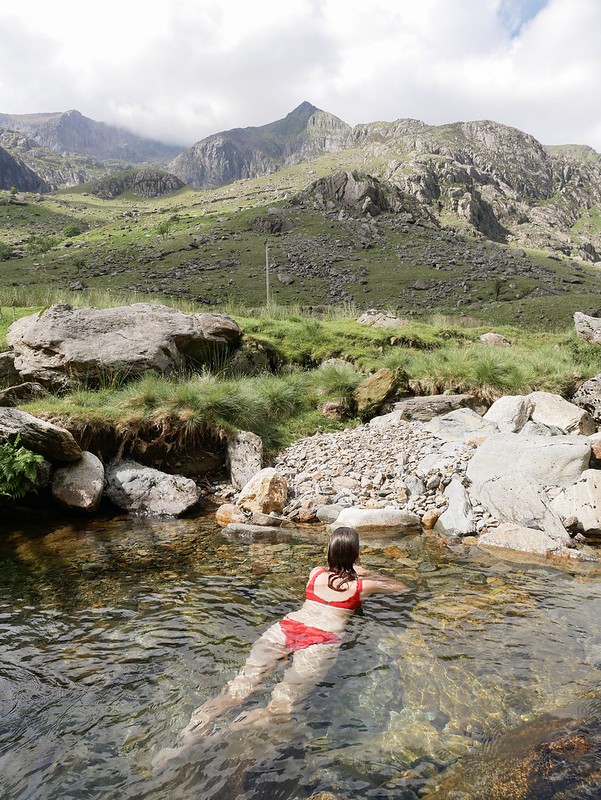 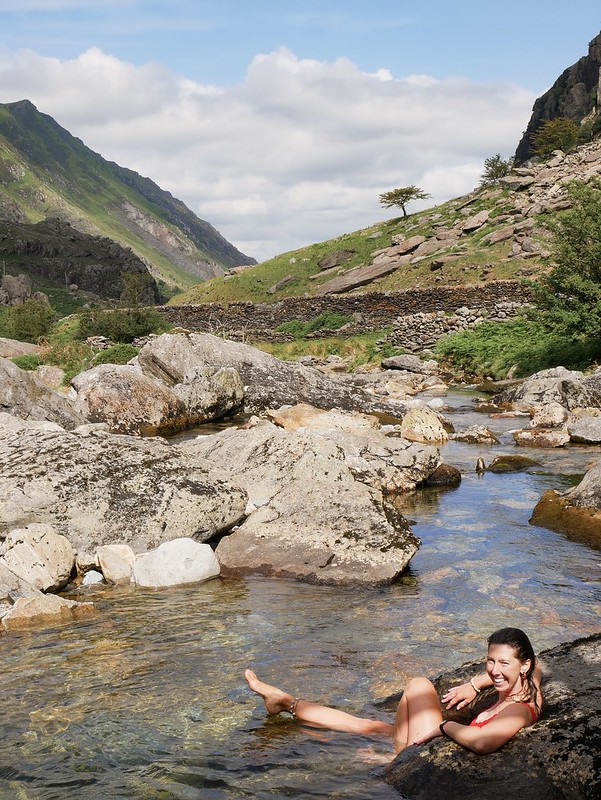 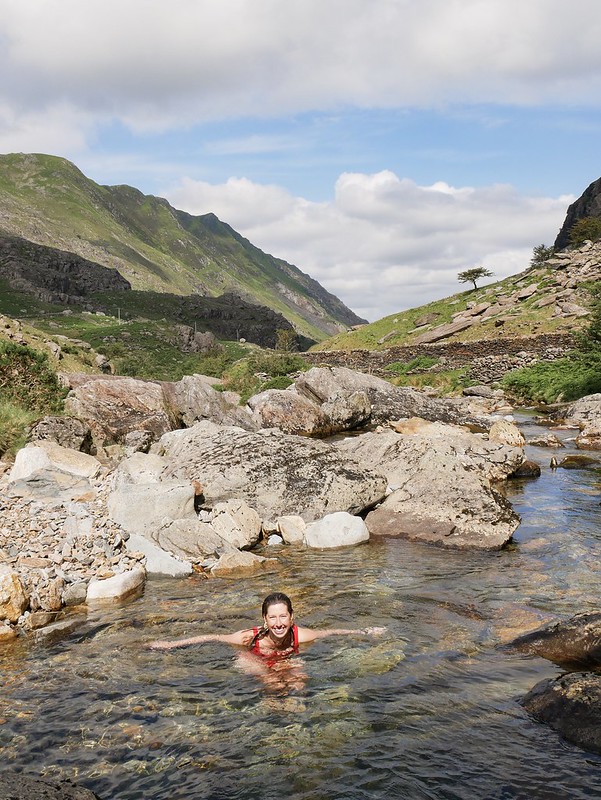 After our refreshing dip we headed down to Llanberis where we decided to take Roland our rowboat out on Llyn Padarn. It was a bit of a gloomy and cloudy day but we didn’t have much energy to hike so boating seemed like a good option. It was surprisingly popular on the lake with lots of people on kayaks and paddle boards. We paddled down the lake towards the mountains where we could see a few familiar peaks which we’d climbed over the past few days.

There was barely any wind when we set off but as usual when we tried to head back it picked up and boy was it tough work paddling. There were almost whitecaps forming across the water and the Welsh flag by the village was flapping like mad. We managed to make it to a buoy where we tied on and waited for things to calm down. It also gave us the opportunity to see the real life Thomas the tank engine train that chugs alongside the lake. I don’t know why but people waving on boats or trains really makes me cringe so situating ourselves infront of this train was a terrible idea as every family on board was jollyfully waving at us while I contained my gag reflex. 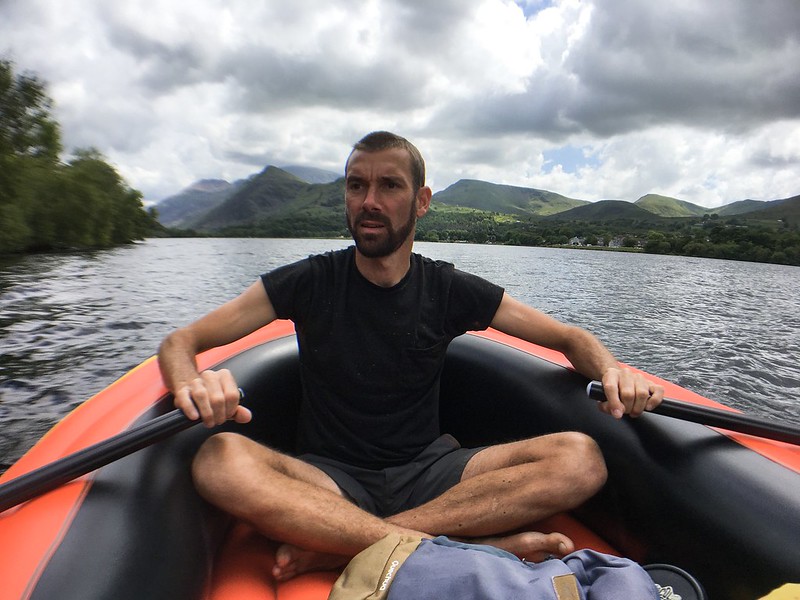 We took advantage of a lull in the wind and managed to paddle further up the shoreline where we tied onto a fallen tree, awaiting a good time to cross the lake to the launching spot. Except for the hurricane winds it was a lovely little paddle and a great end to our time exploring Snowdonia. 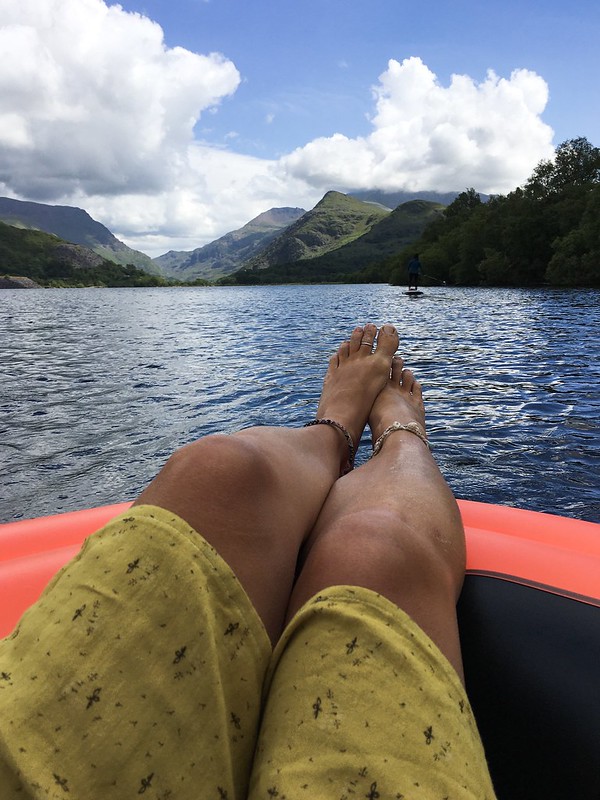 In the late afternoon we headed to Caernarfon to stay for the night. It was a nice little spot, right on a roadside but a very quiet one. We had the sea to one side and across the water was the huge castle which the town is famous for. It was a beautiful castle so we headed across the bridge to have a closer look. We also thought it was about time we treated ourselves to a meal out but the place was a ghost town at 7pm. It was so bizarre, most restaurants were closed and we were left feeling like there’d been an announcement about an apocalyptic situation and everyone had abandoned the town. The central square area had a few drunk people wandering around and we just didn’t get the best vibe from the place so we headed back to Helga and cooked our own meal. 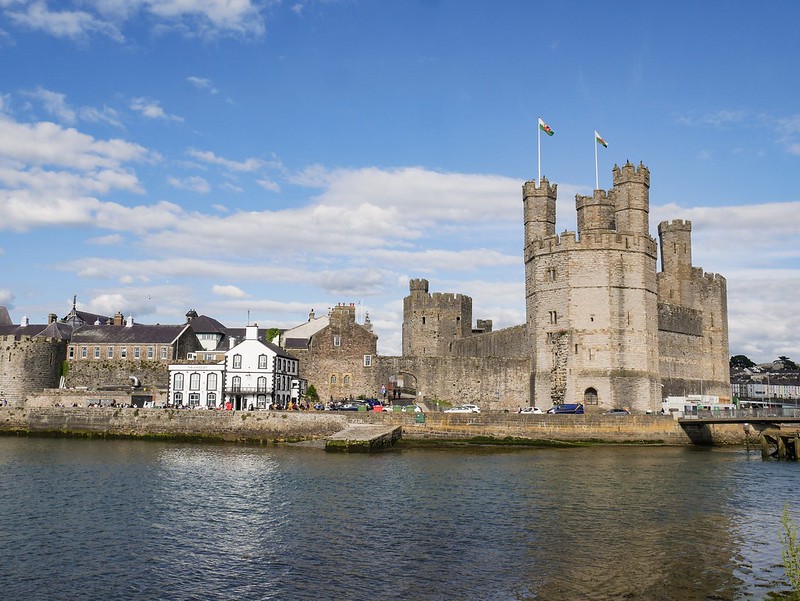 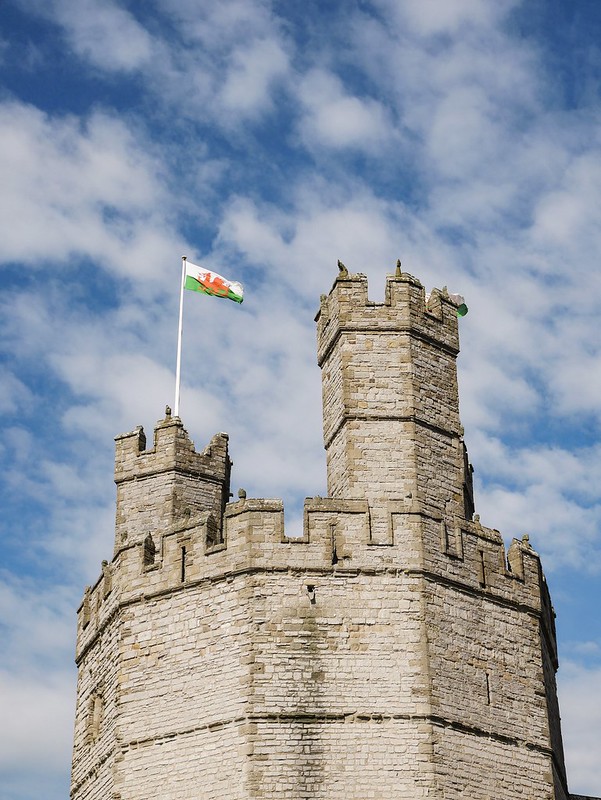 The castle was reflected in the calm waters and at sun set we were treated to a beautiful sight with the sun turning the sky orange. 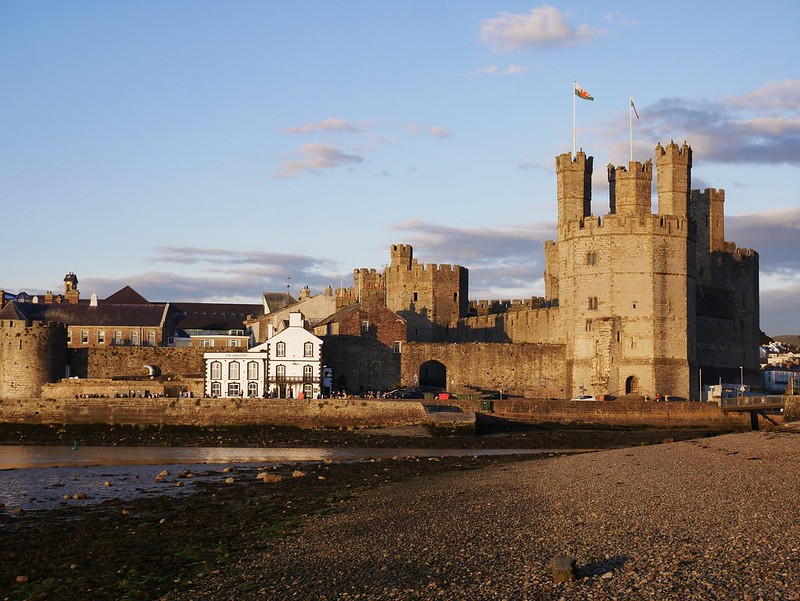 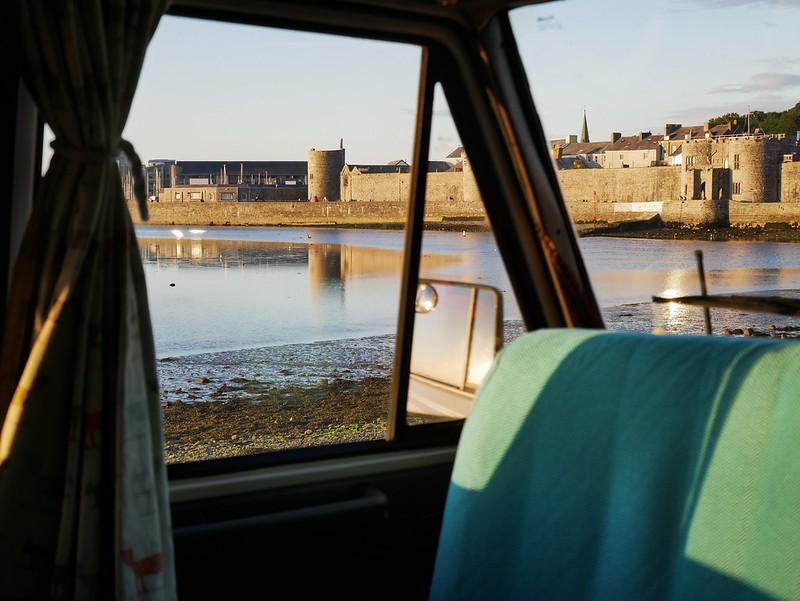 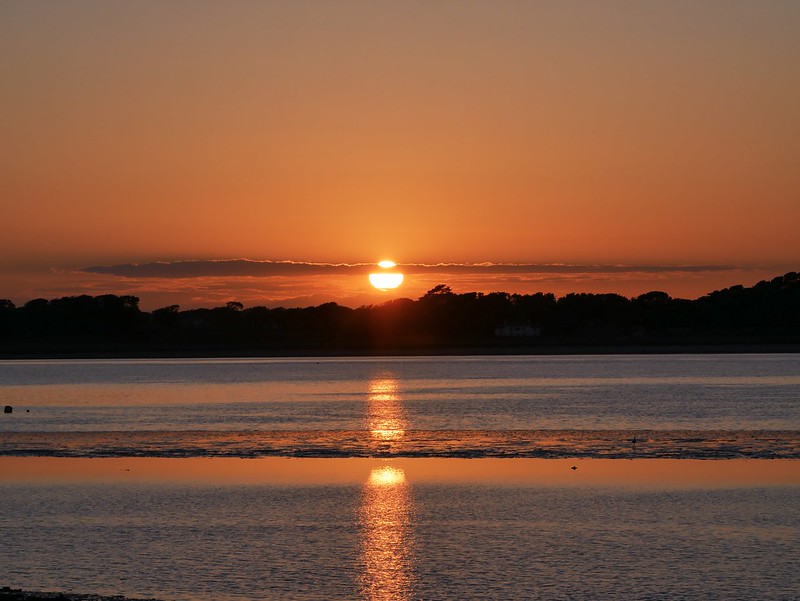 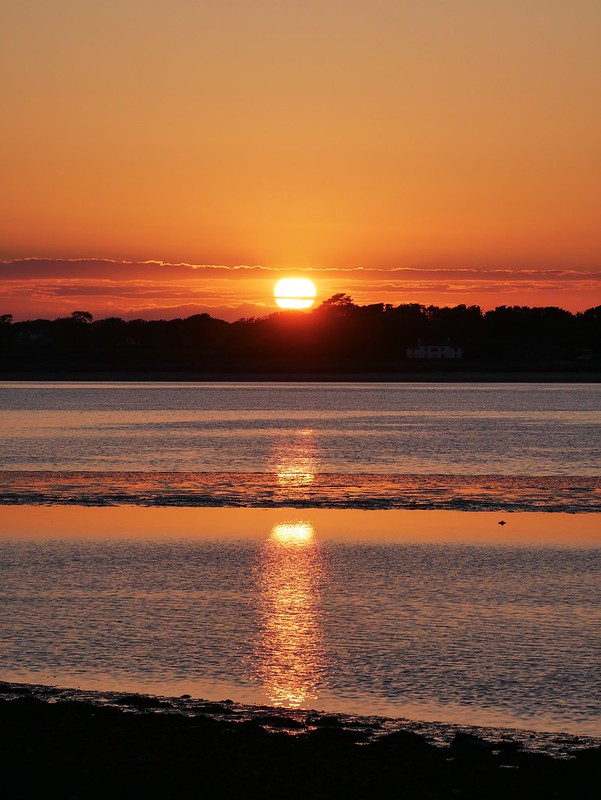