We hiked Snowdon back in 2014, taking a back route from a campsite in Llanberis, and then the main ‘motorway’ route back down. I wasn’t too bothered about hiking it again to be honest, but when I did some research I discovered there was a route up which sounded right up our street. It was called ‘Crib Goch’ and it consisted of a Grade 1 scramble with a seriously airy ridge-line and sheer drops. We were sold.

We woke at 7am to make sure we got a parking space along the roadside. The lay-by still charged but it was only £4 for the whole day compared to £18 at the main car park, and that needed pre-booking too. It meant we had to walk a couple kilometres extra but it was a small distance in the scheme of things. The sun was shining and it was a perfect day to head up the summit. 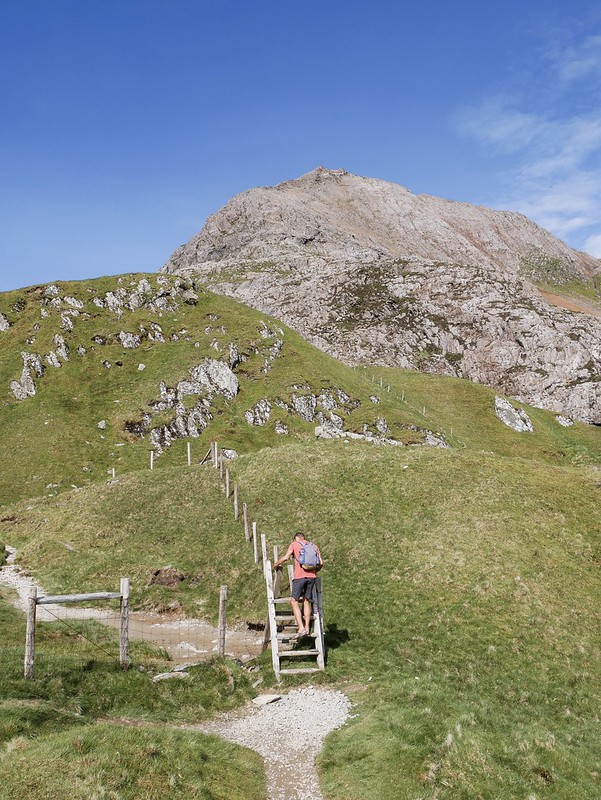 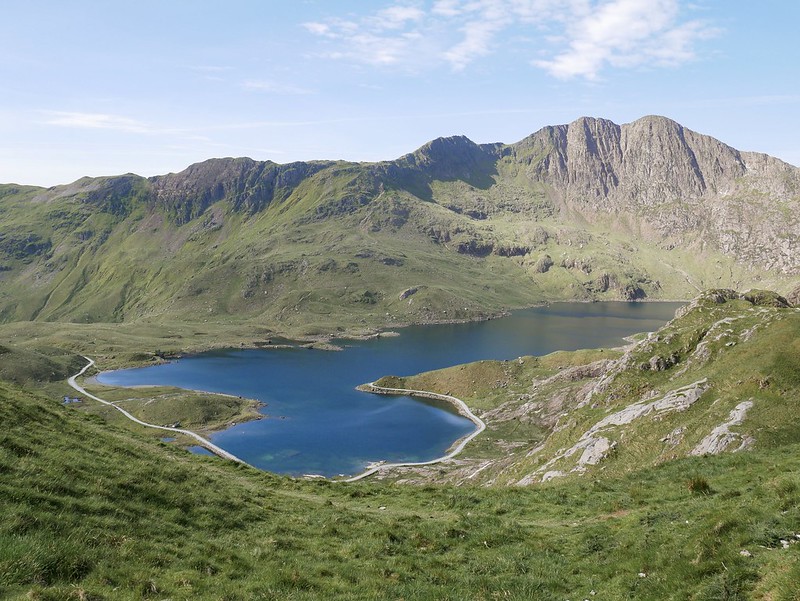 From Pen Y Pass we headed west along a gravelly track with lush green mountains around us. It didn’t take long to reach our turn off for Crib Goch where a caution sign let us know our route choice was a slightly dangerous one, and it didn’t take long for the scramble to begin. The first section involved climbing up rocky slabs and boulders. I read this is the most intense scramble you can do in the UK without requiring any ropes and it was certainly proving to be a wild one. Some sections looked impossible to get through, we had to find footholds and leaver our bodies up. When we weren’t navigating our way around the rocks we stopped to admire the view where two lakes were nestled in the valley way below us and there were mountain views all around. 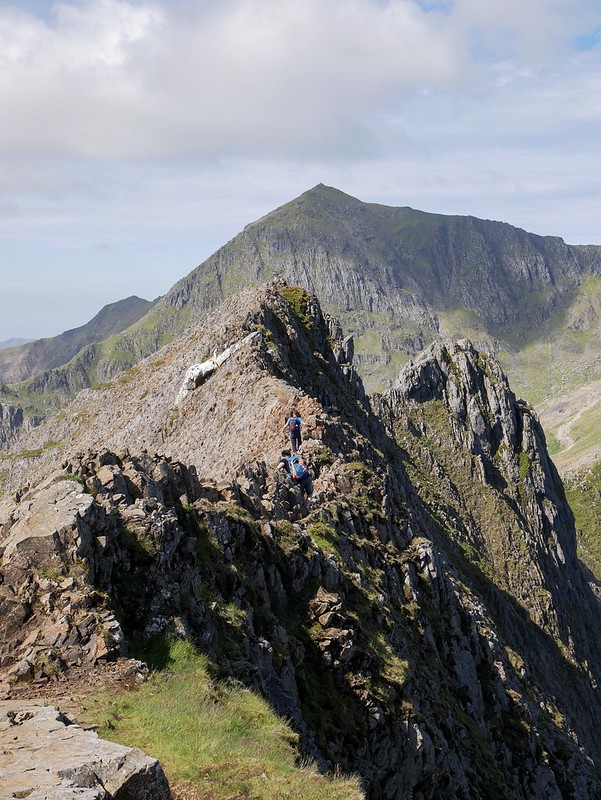 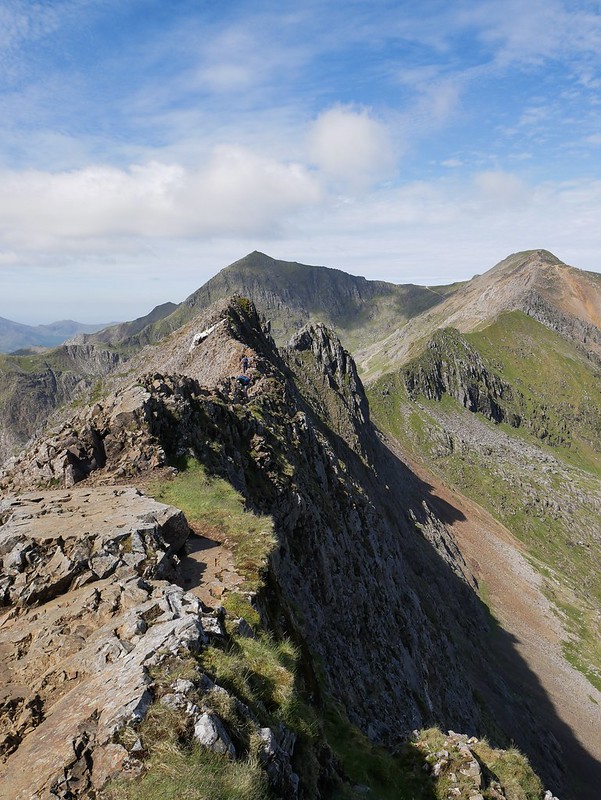 After the first scramble we arrived at the start of the ridge and it was actually more extreme than we expected. It’s so hard to gauge what a hike will be like just by reading information online. Some people make it sound way worse than it is so people without experience aren’t tempted to try it. I can safely say this route is not one to be underestimated and a very exposed ridge was ahead of us. The left side wasn’t too bad, but if you fell down the right you’d have some horrific injuries. 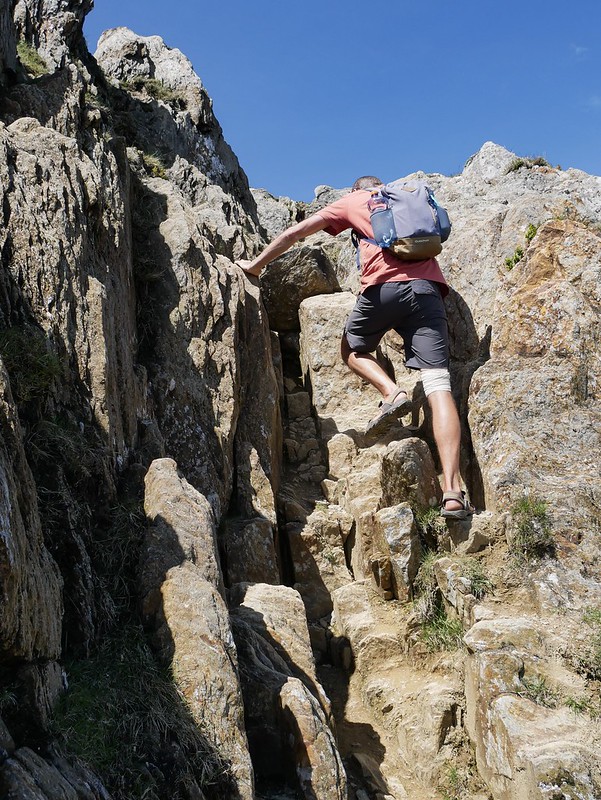 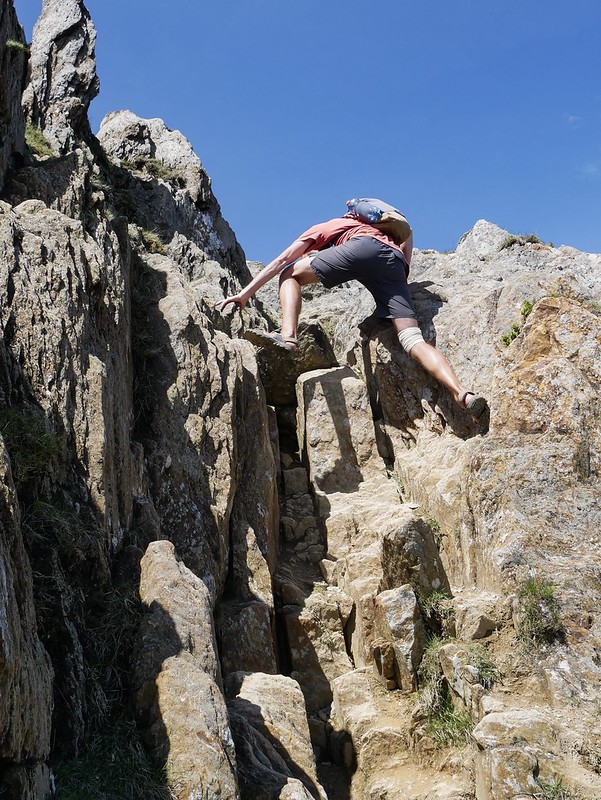 So I did what any sane person would do on a death-defying ridge and I practically walked on all fours the whole way. There were some scary sections but most of the time we were able to stick to a narrow track along the left edge which felt much safer. Even when it was safe and I could stand straight I found myself on all fours still, just to be sure. I never got vertigo or felt scared but Craig said he had a few moments where his vertigo kicked in, which explains why he barely talked to me as the poor lad was focusing so much. In the meantime my imagination was running wild as usual and I was thinking what a funny sight I must’ve looked crawling along this mountain. I felt like I was acting out a demonic scene in a movie and I thought about how I missed a trick, I definitely should of worn a white night gown and a long black wig so I looked like a possessed women in a horror film. 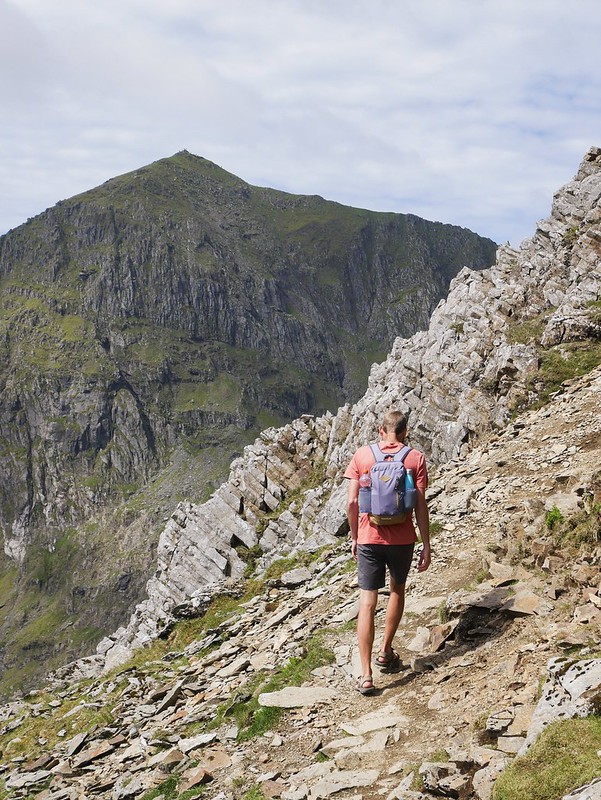 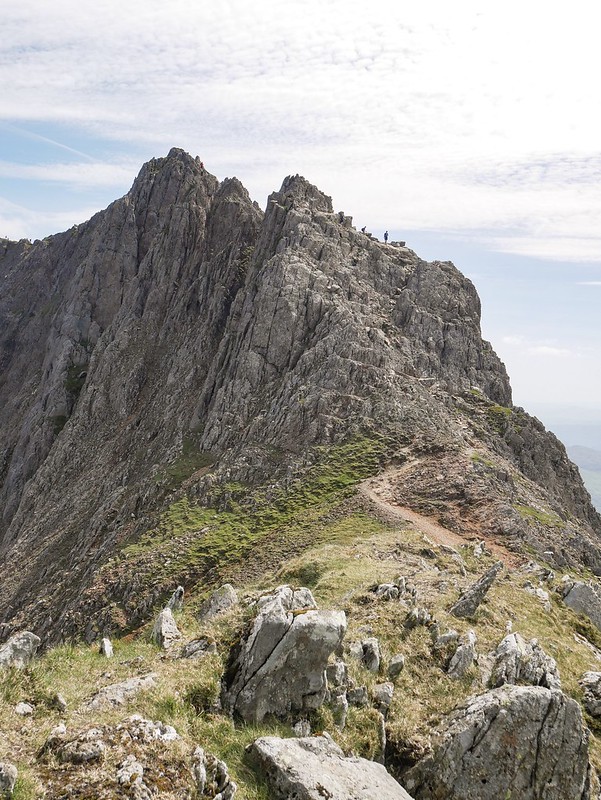 The ridge lasted quite some time but we soon reached another jumble of boulders that required scrambling. Some sections were almost vertical walls with just a few foot and hand holds to grab onto. The Crib Goch route was nice and quiet though as it’s for experienced hikers only, yet behind us was a guy who looked rather lost. He said something like “I didn’t expect it to be like this” and we laughed thinking it was a joke but then he revealed that he had no idea what trail he was on and just hiked up!! What a plonker! 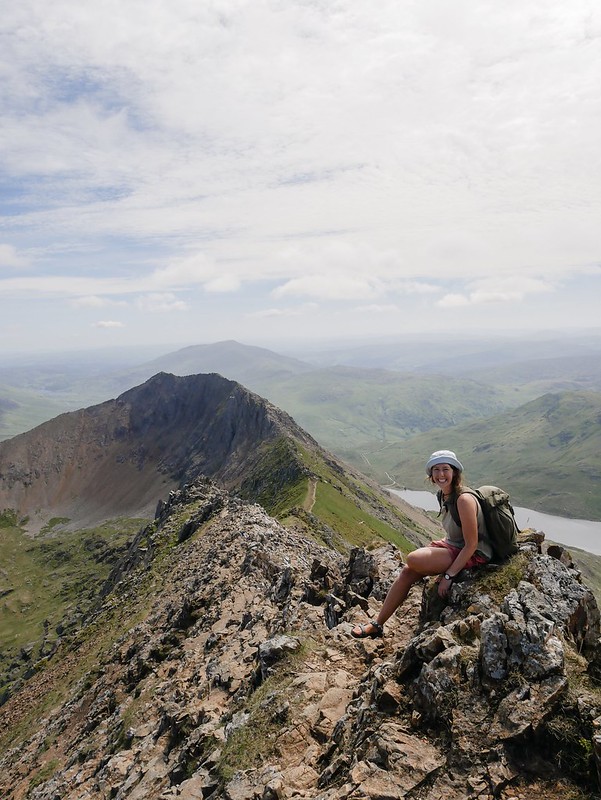 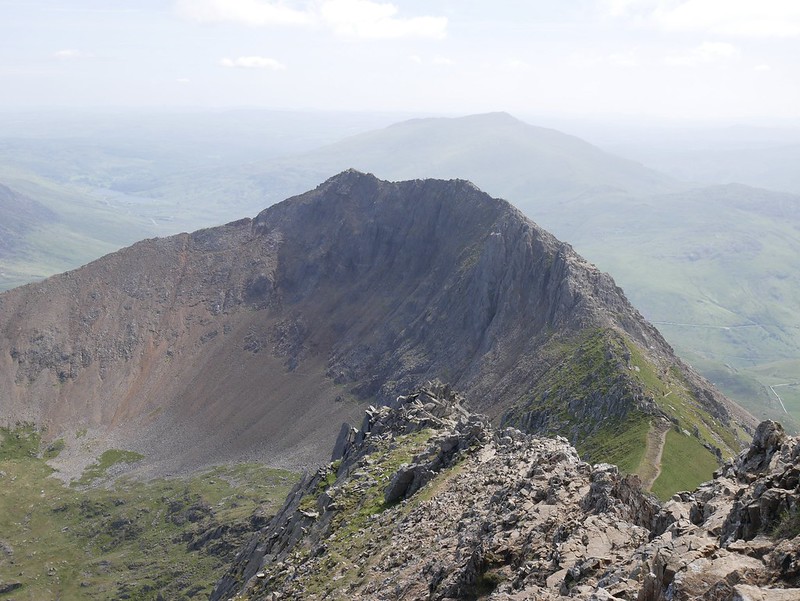 We got a good view back of the narrow ridge we’d hiked along, looking like a jagged knife edge, it was quite an impressive feat. The adrenaline inducing sections calmed down and we made our way up the summit of Garnedd Ugain, which at 1065m it stands just 20m shy of Snowdon’s peak. Such a minor difference in height yet we could see Snowdon in the distance had a long queue of people waiting to reach the summit, yet we had this peak all to ourselves. 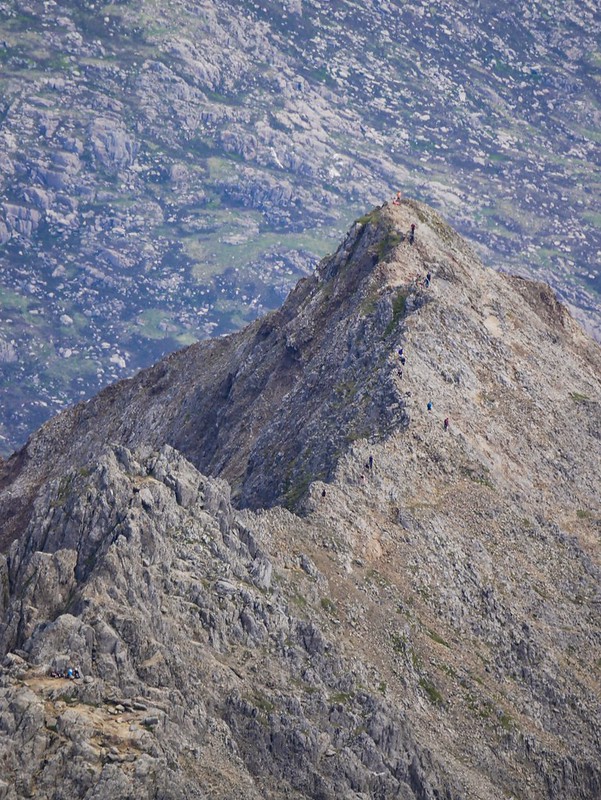 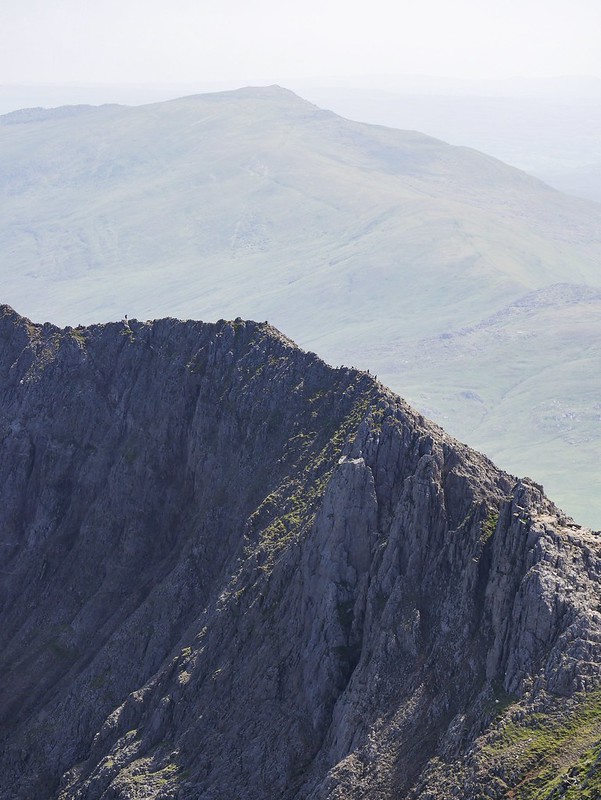 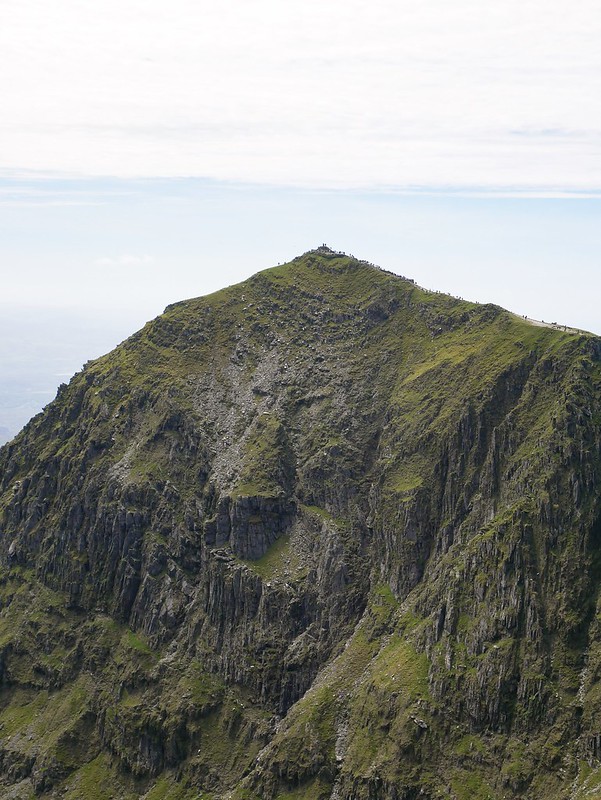 I almost didn’t want to go to Snowdon, it was so crowded but we decided to do the short detour to the top, walking past the queue of over 100 people. It was crazy, they were all waiting to get a photo at the sign. We sat on the rocky ground just beneath the summit and enjoyed a cup of coffee while admiring the view. We could see the wild route we’d just taken, and to our right was another ridge-line which looked like a fun option back but there were too many ups and downs for my liking, so instead we opted for the easy Miner’s Route that heads straight down through the valley. 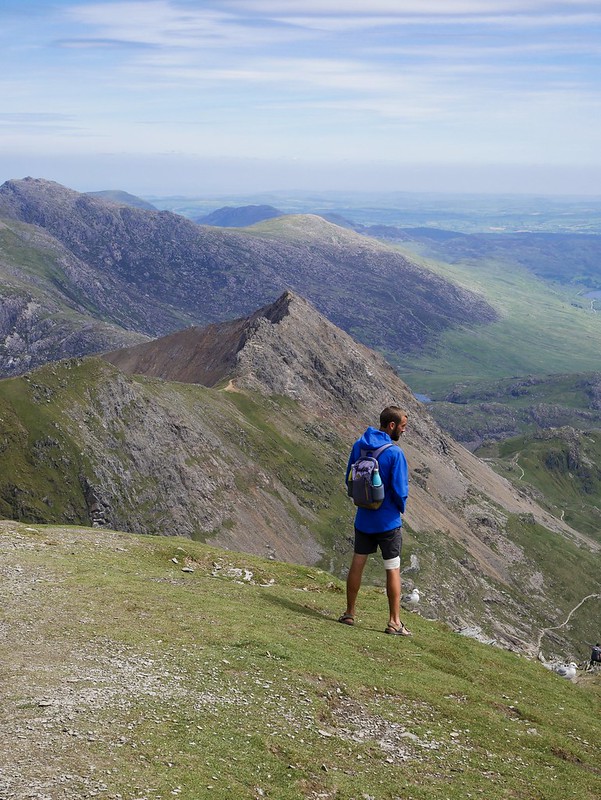 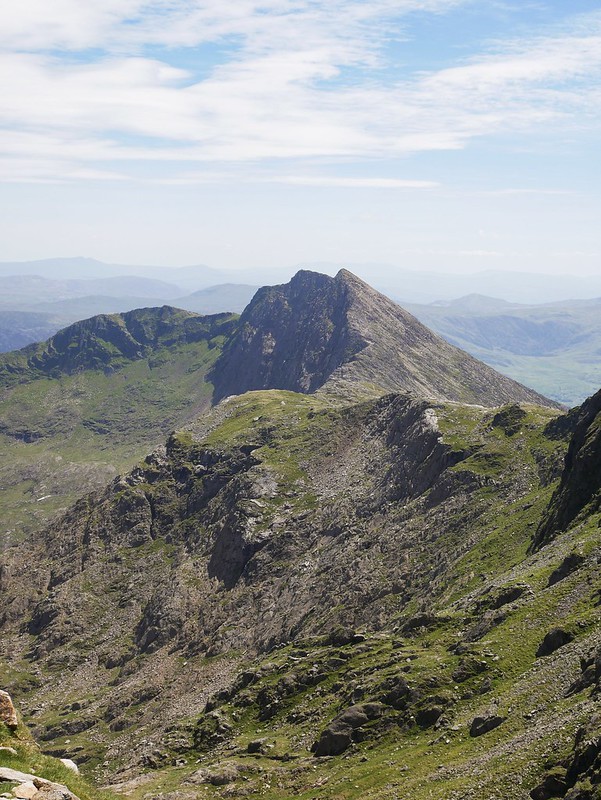 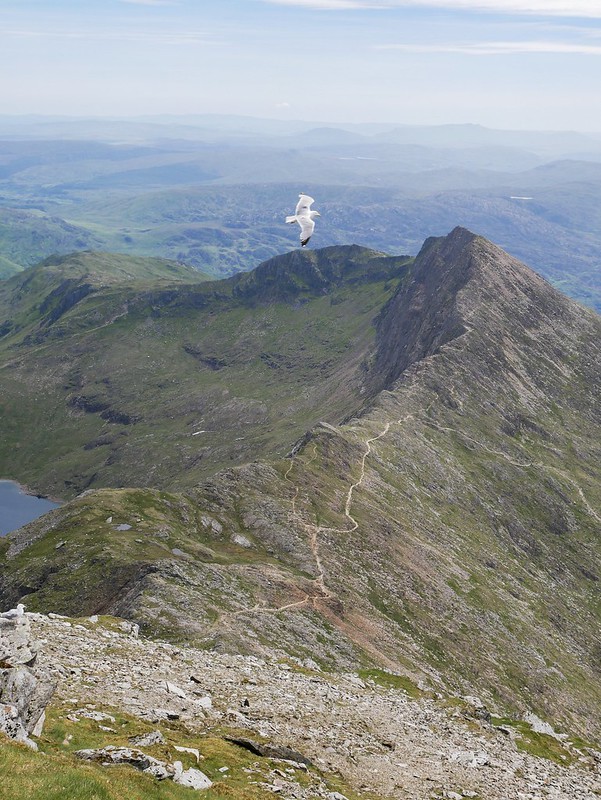 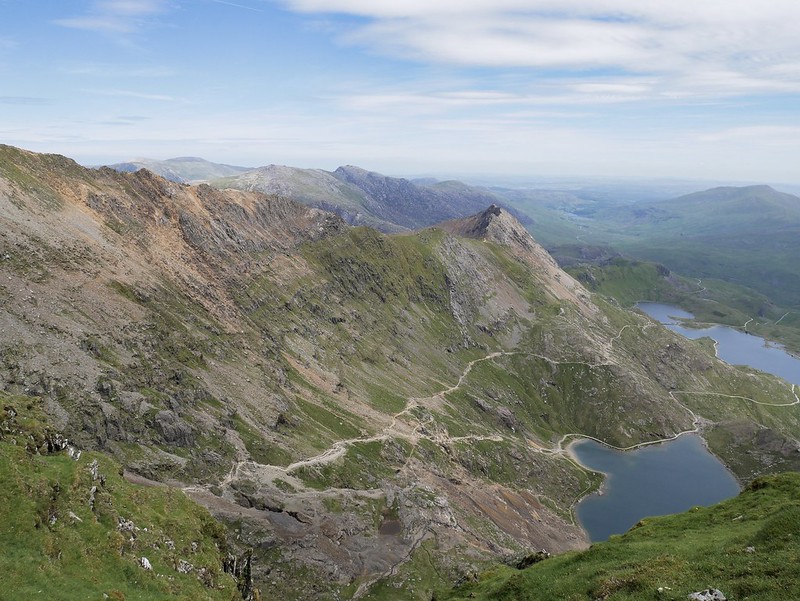 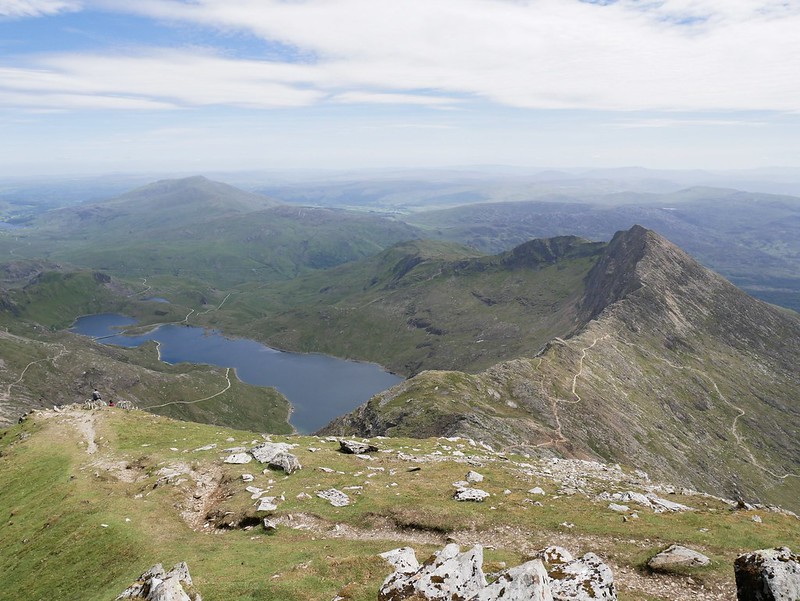 It was horrible hiking such a busy route after tranquil Crib Goch where the only sound we could hear was our heart beat in our ears. The Miner’s route involved a lot of slow walking as we tried to overtake people and plow our way down to the two lakes that looked ever so tempting for a swim. We arrived at the first lake and it was absolutely gorgeous, the water was insanely clear and blue and I couldn’t wait to dive (bellyflop) in. It was pretty cold but so refreshing and just what we needed. 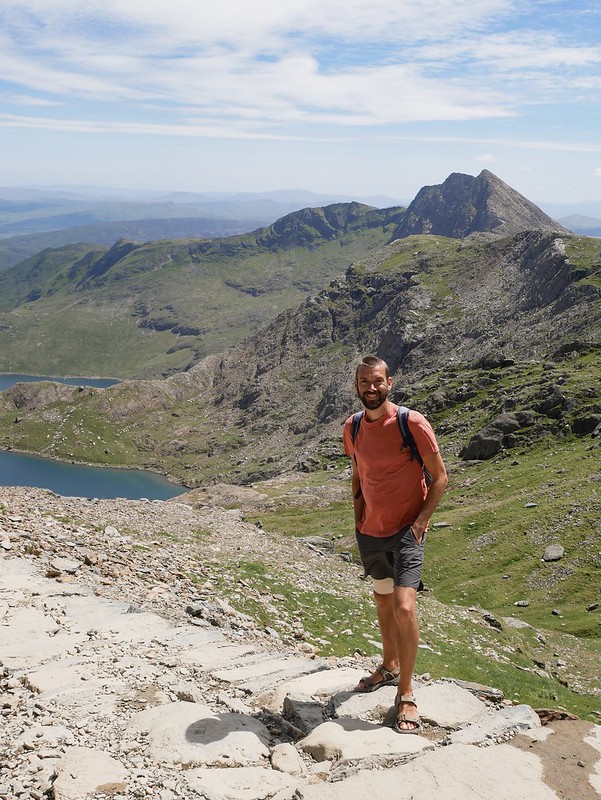 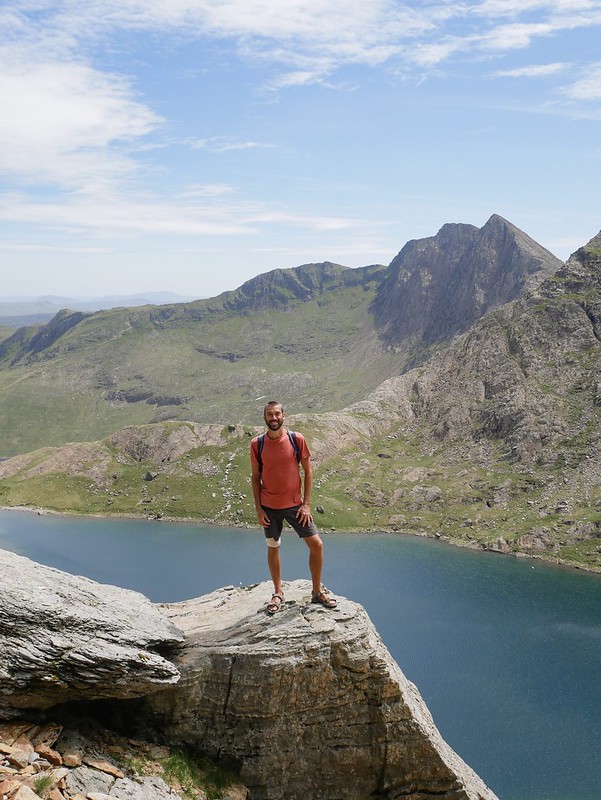 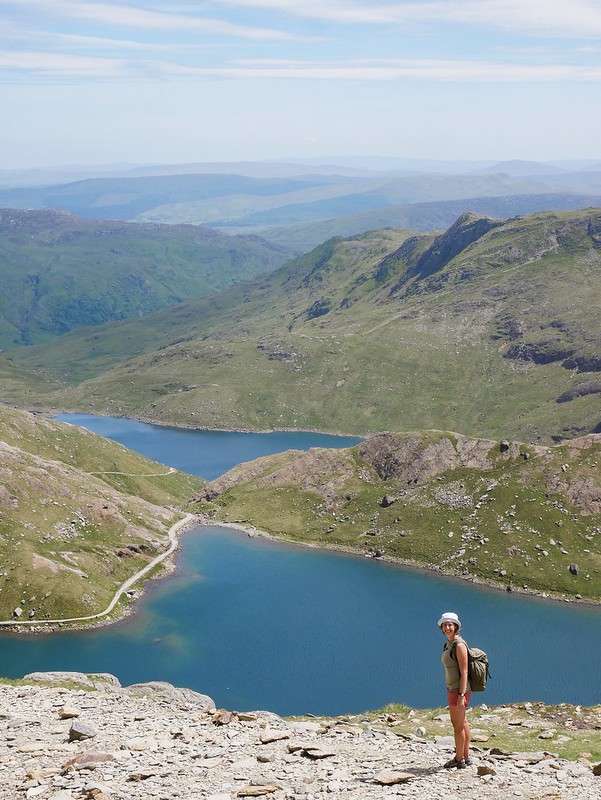 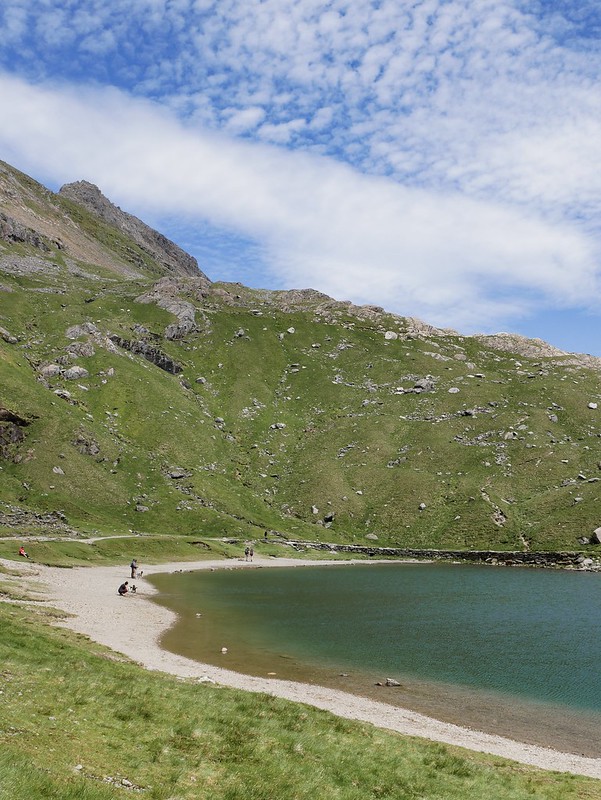 The walk back was very scenic but boy did it drag on. Eventually we arrived back at Helga and spent awhile just sinking into the sofa. So many cars parked along the road by us had parking fines on their windscreens. Either they didn’t see the sign to pay or decided to risk it but that’s never a nice thing to come back to. 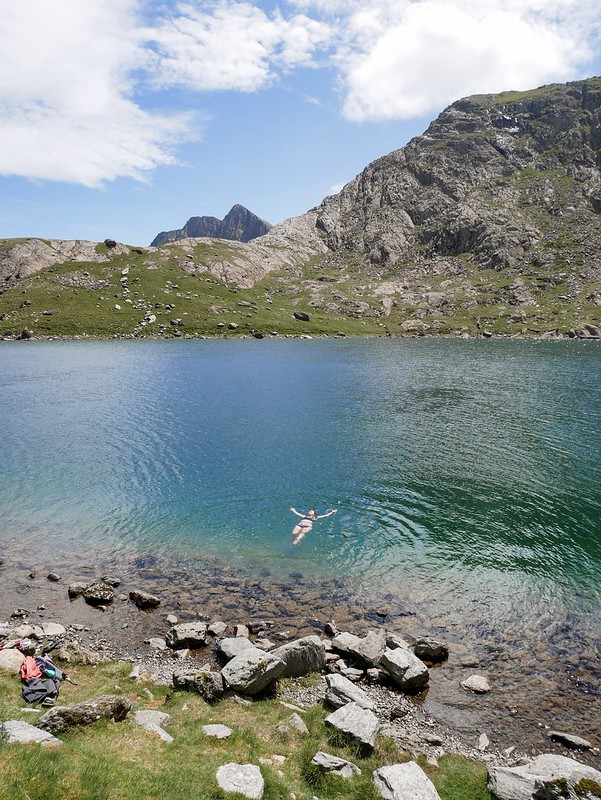 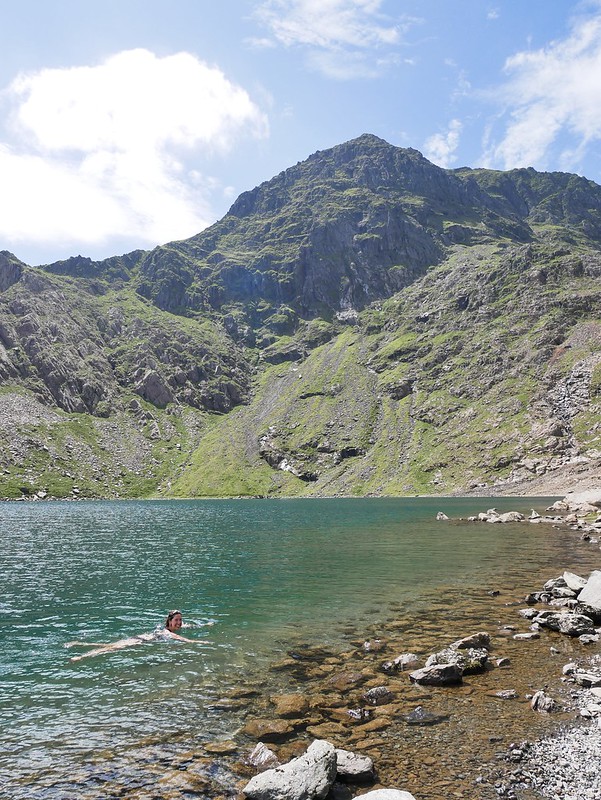 We decided to try and stay nearby in a small parking area with a view across Snowdon and the surrounding mountains. Just as we arrived a car left and we managed to nab the best spot! Our side door opened out to an incredible mountain view so we spent the early evening sipping gin and tonics with a million dollar view outside our house. 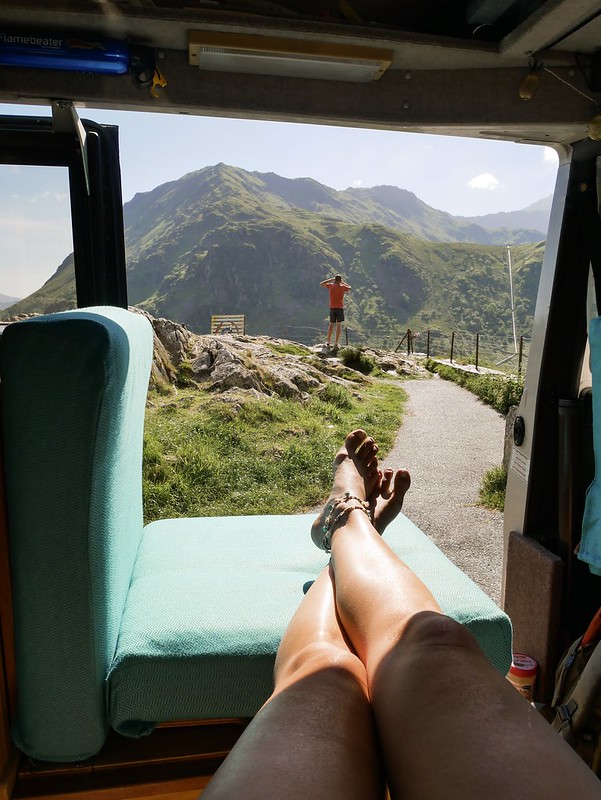 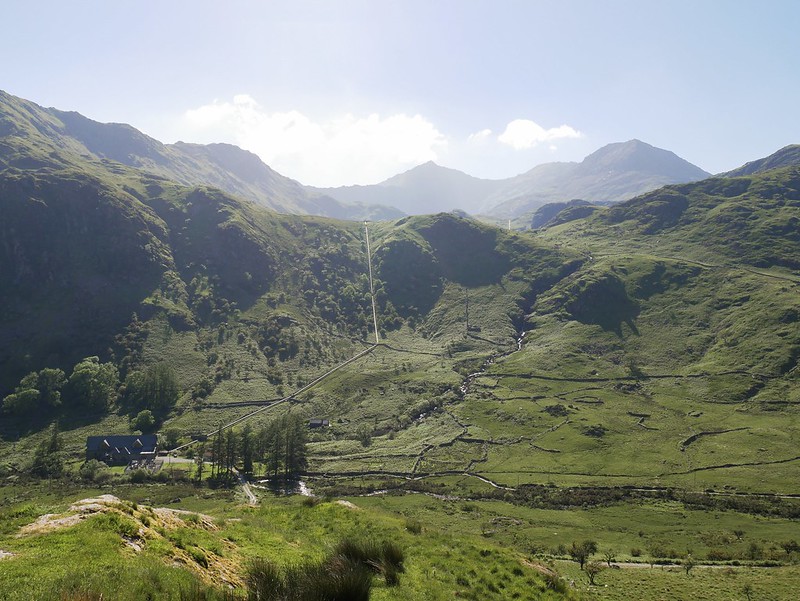 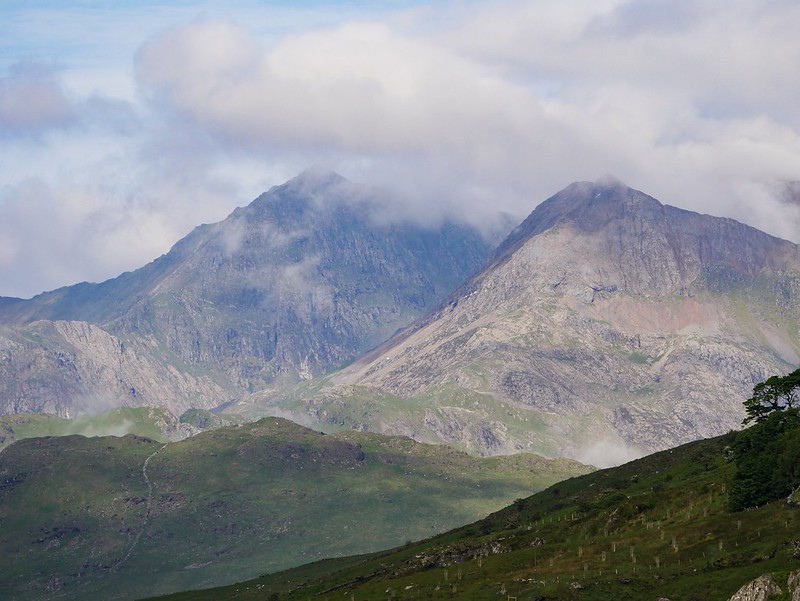