Some people consider Tryfan to be the only true mountain south of Scotland. It’s rugged and rocky with a typical pyramid shape and the only way to reach the summit is by using your hands and feet. We’ve hiked it a couple times before and we loved the scramble aspect. But this time we wanted more of a challenge so we opted for a different route. We wanted to climb up the north ridge of the mountain which is considered a grade 1 scramble. The area was heaving with cars lined along the road and the weather was superb which probably made it even busier, so we set off nice and early to try and beat the crowds. The normal route up involves a section of scrambling towards the top, this route however was pretty heavy going from the get go. It was hard to figure out the route up at times as the faint path would just meet a sheer wall of rock. I couldn’t believe how hot it was, it must’ve only been 9am yet the sun was scorching on my back and I was worried we didn’t have enough water. 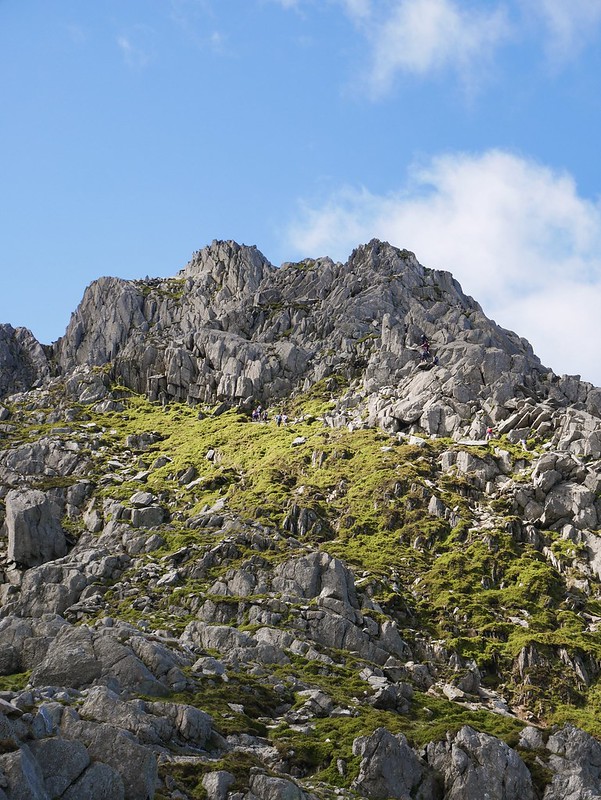 There were a couple sections where we must’ve accidentally taken a wrong path as the route became pretty wild. One section went through a gully where a rock was wedged between the two walls like in the film 127 hours. We had to pull our bodies up onto the rock and it was quite challenging at times but also very fun. After a couple of hours we reached the summit at 918m where we were reminded of the two rectangle shaped boulders at the top. Technically they mark the summit as it’s the highest point, but getting up to them is tricky. Some say it only counts as reaching the top if you jump from one to the other but we climbed up one on our last visit and instantly said hell no to jumping. We played it safe this time, we had to keep our legs full of energy as we had a long hike ahead. Below us were superb views of the surrounding mountains and two lakes nestled beneath them. 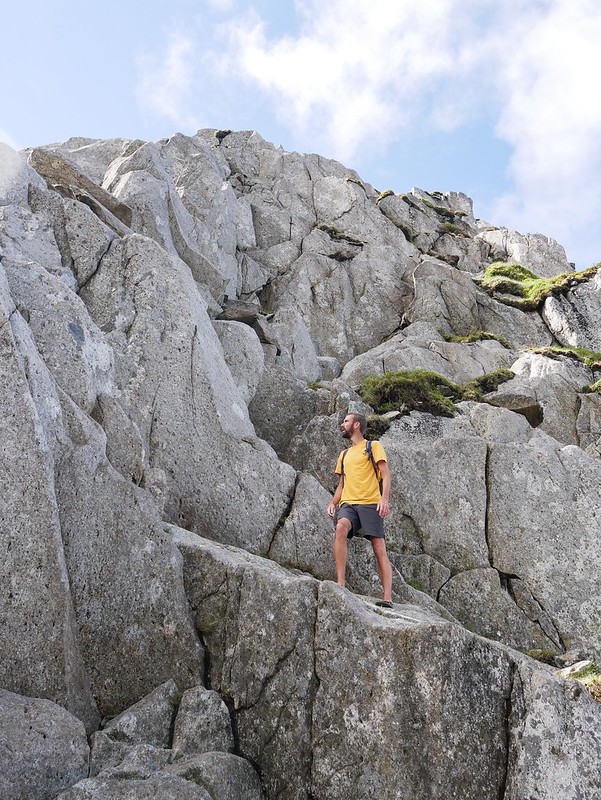 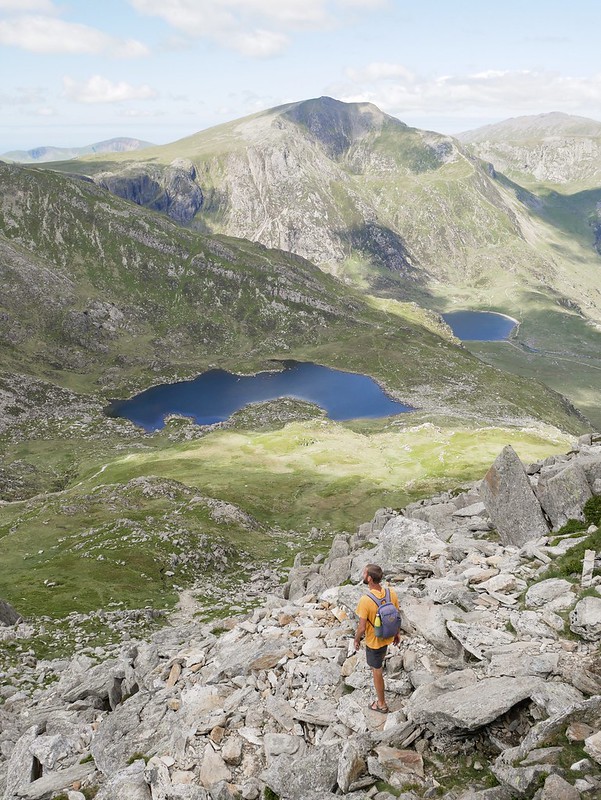 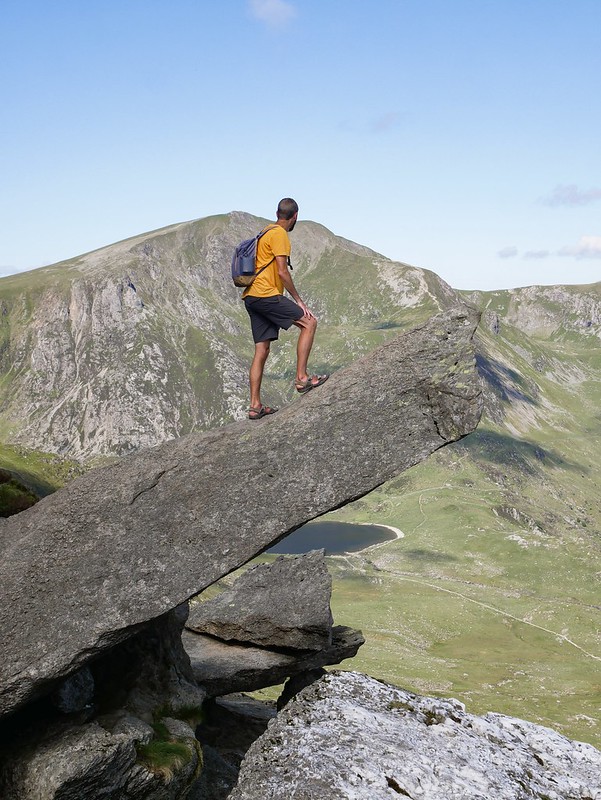 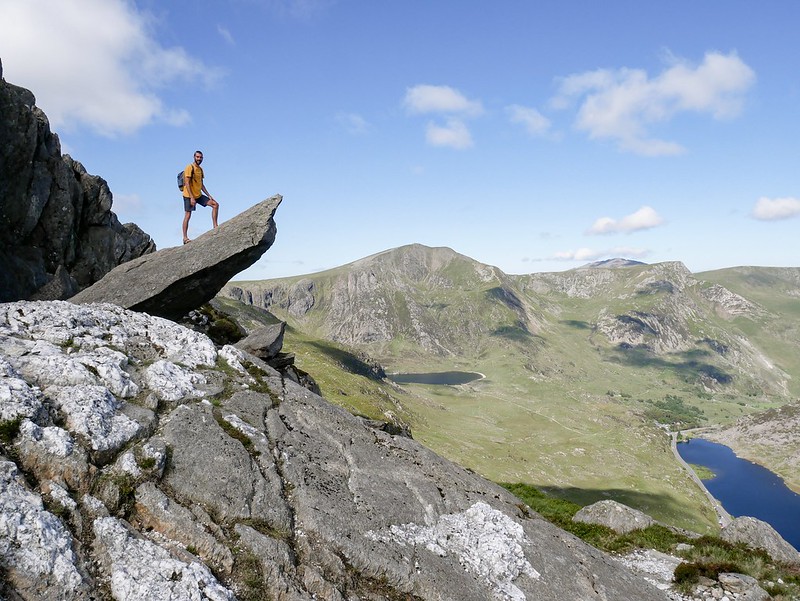 Our plan was to hike up Tryfan, then continue up to Glyder Fach at 994m. Annoyingly we had to go downhill quite a chunk before we climbed back up. We did pass some cool mountain goats right by the path though. They had big horns and weren’t afraid to walk right beside us, then they had the cheek to all climb the steps over the stile – a feature designed to keep animals out. I guess the stile still keeps the farmers sheep in their field and the goats are wild and able to roam freely. 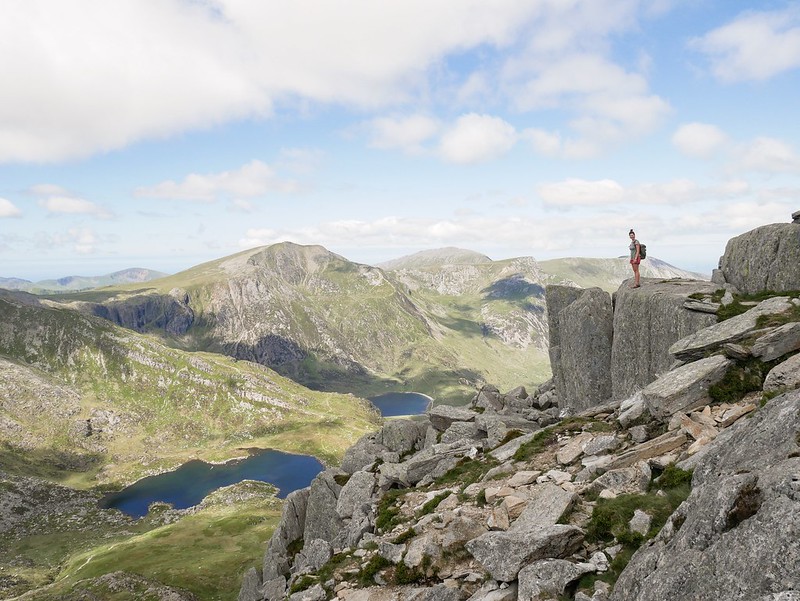 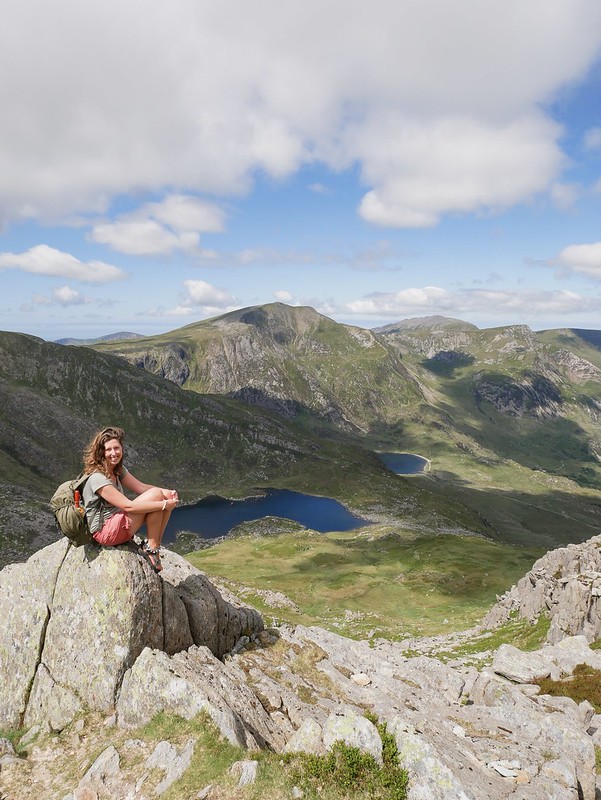 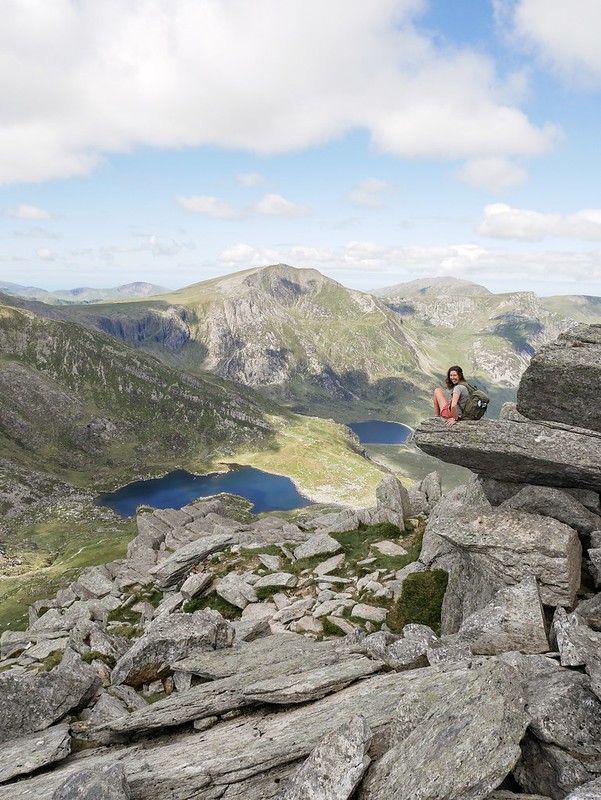 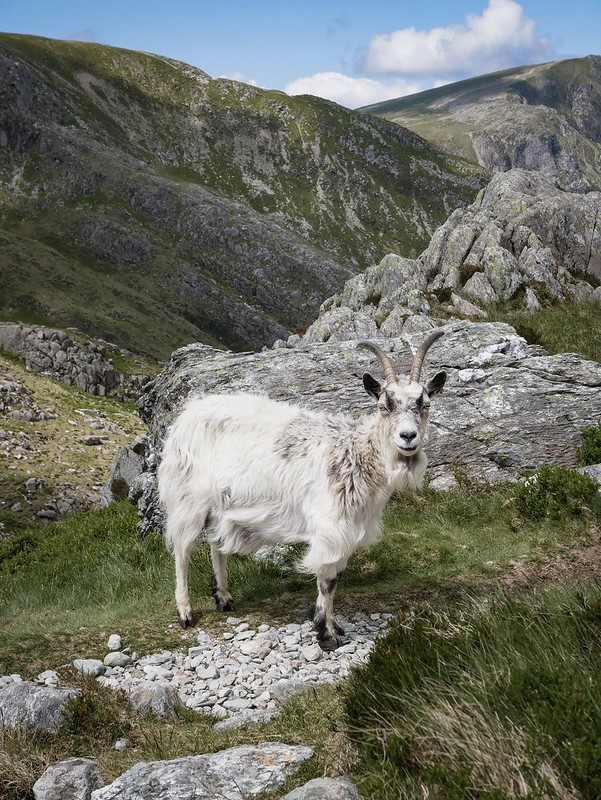 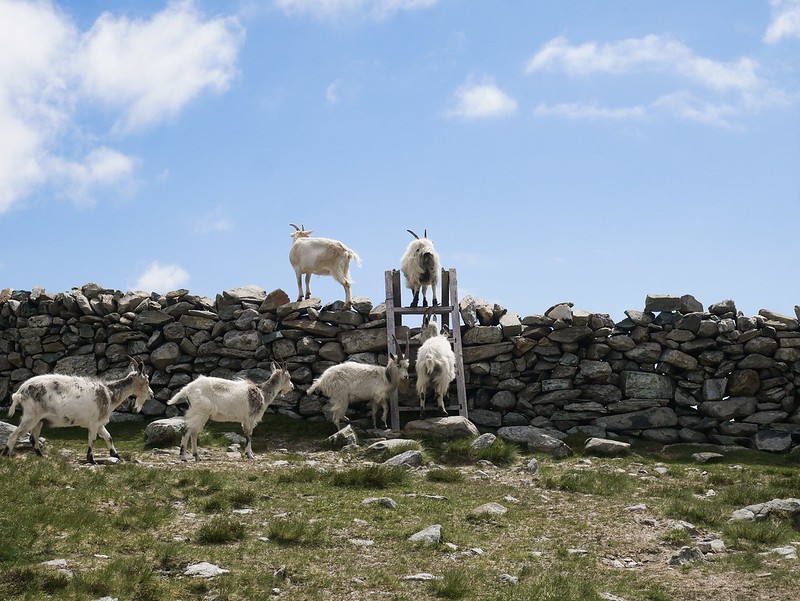 The route up the mountain was a slippery, gravel track which zig zagged it’s way uphill. At the top we were greeted by a huge mass of bizarre rocks. They were shaped like big shards, kind of like those fancy shards of chocolate that people have on cakes. 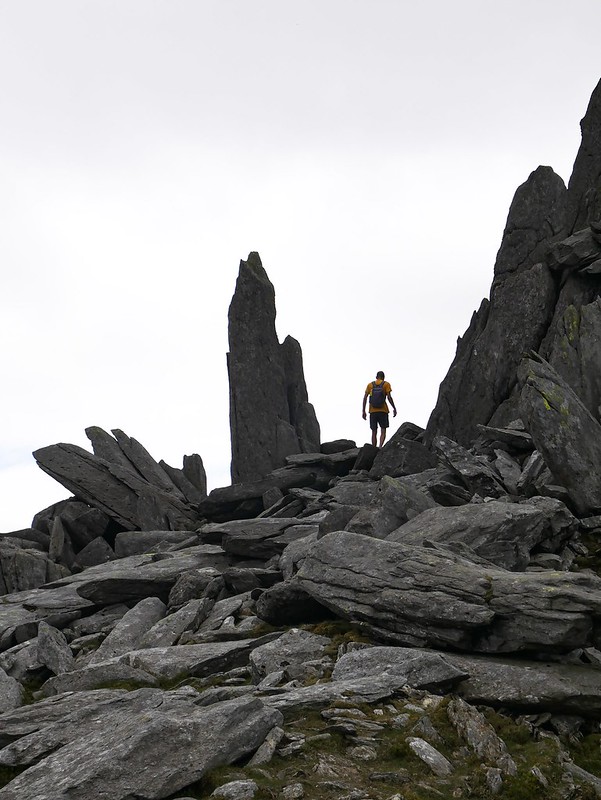 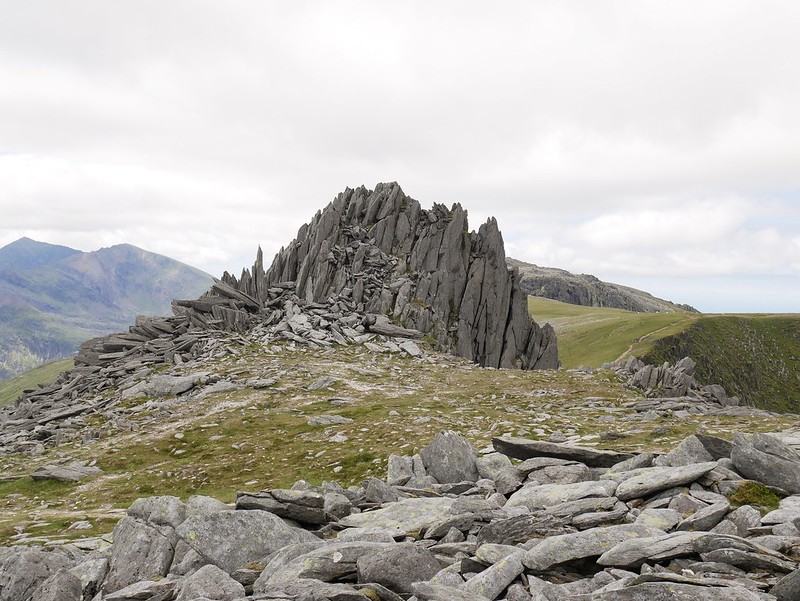 The weather clouded over a bit but we had views across to Snowdon and the surrounding peaks. We followed the boulder strewn plateau to Glyder Fawr summit, the fifth highest mountain in Wales at 1001m. Then came the descent and it was a brutal route along the most slippery track. The path was a mix of loose scoria and rocks and we were practically skiing like a couple of newbies on a slalom track. Our reward at the end was a little lake where Craig jumped in for a swim – it was a little on the windy side for me though. 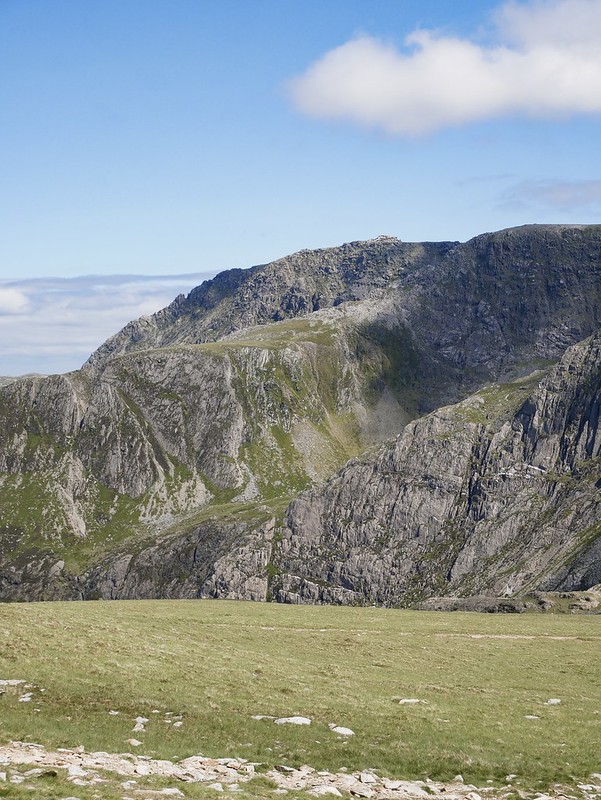 From the lake we were at a bit of a crossroads. We had to decide if we wanted to make our way down the mountain now or hike up one more summit to Y Garn. The mountain had been dominating our horizon for a while and after continuously saying ‘nah it’s too steep…we’ve hiked too much’ we changed our minds and went for it with a ‘ah you only live once’ attitude. It wasn’t too tough to be fair and after a sweaty slog we arrived at the top which we had to ourselves. Much to our delight the sun returned so the view was incredible, we had multiple lakes dotted in the green valley beneath us and a fab view of the huge horse-shoe shaped ridge we’d just hiked along. It was probably the best view of the day so I was very chuffed that we hiked up. 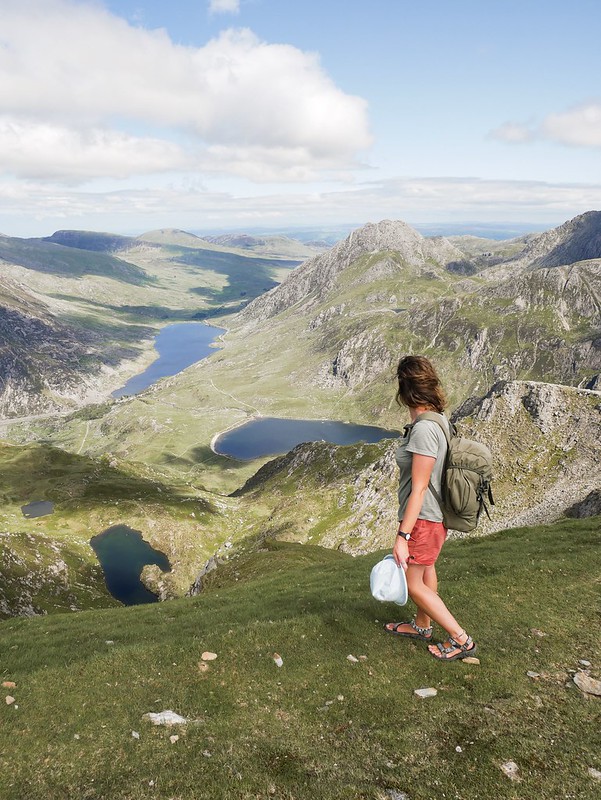 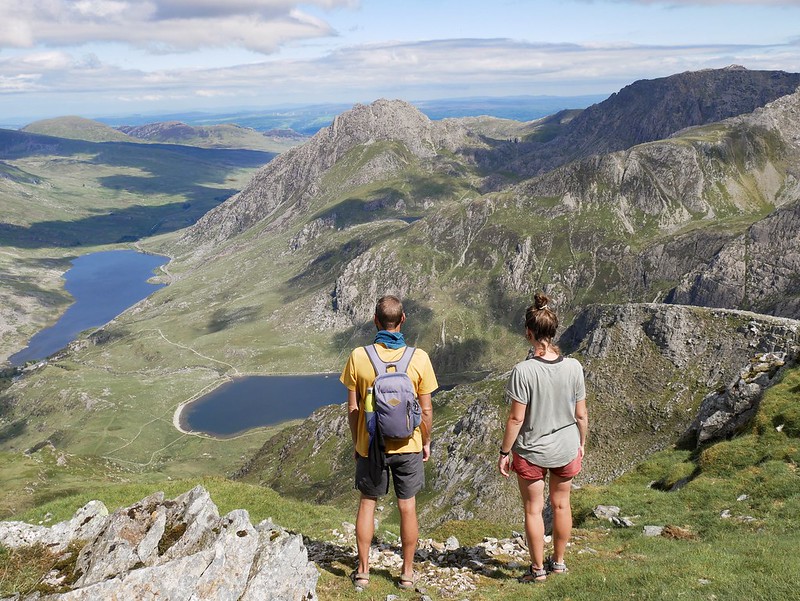 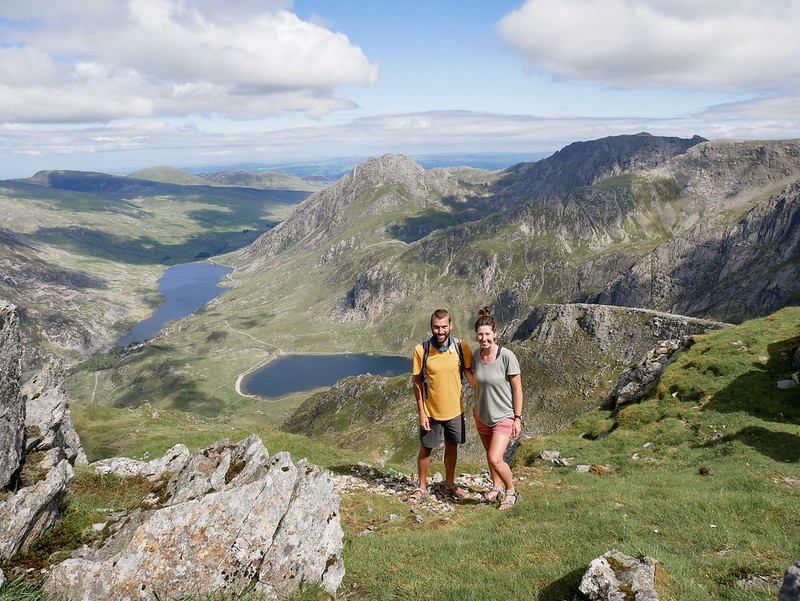 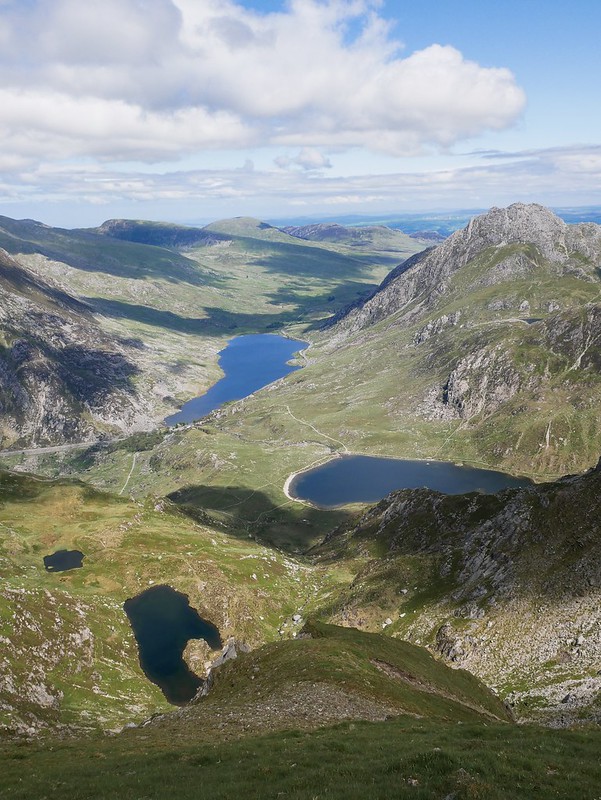 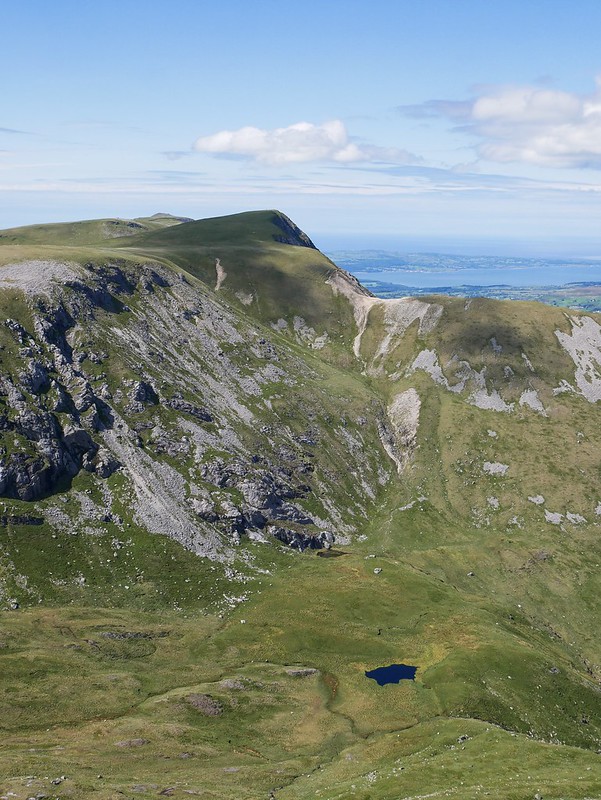 My legs were beginning to struggle on the descent, my knees were stiff yet my legs felt like jelly. We had to go down 560m elevation in less than 2km to reach Llyn Idwal where we were very excited to have a well needed swim. There was a main beach area which was quite busy with people so we escaped them by walking 100m round the lake. It was extremely shallow, in fact it wasn’t the nicest lake to swim in at all. I like to be able to touch the floor but as soon as I did the silt plumed around me, turning the water brown like I’d schat myself. 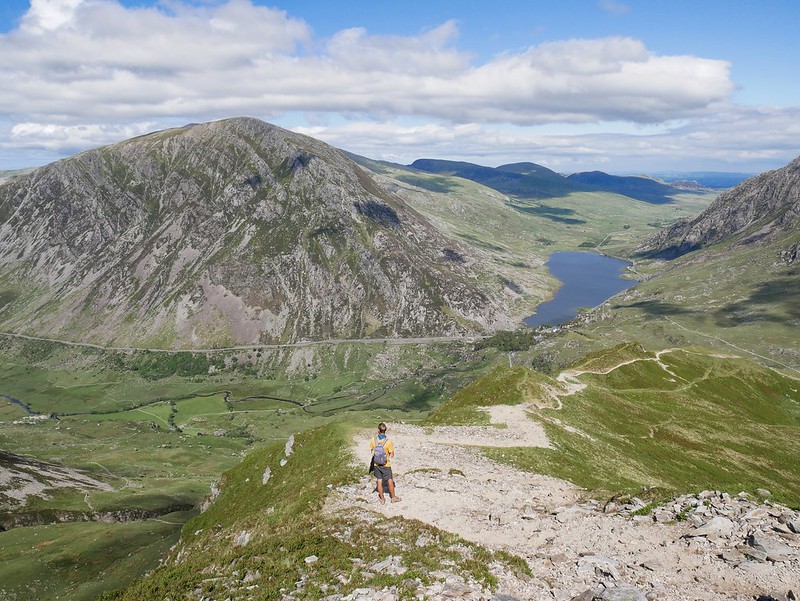 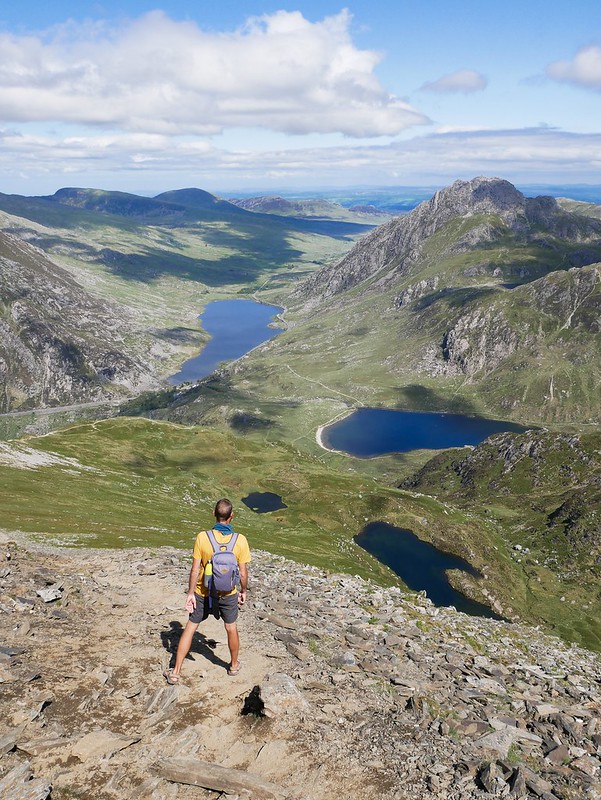 On the plus side the lake was surrounded by dramatic mountains so it was a stunning spot to take in the view of the mountains we’d just hiked. I’d gone to the effort of carrying my inflatable tube on this entire hike so I could use it on this lake so I had fun floating on it away from the silty shores. 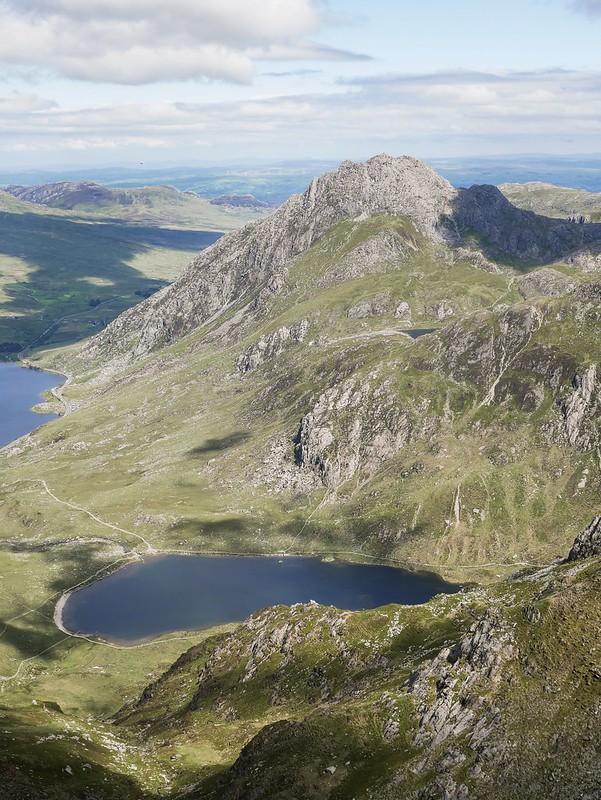 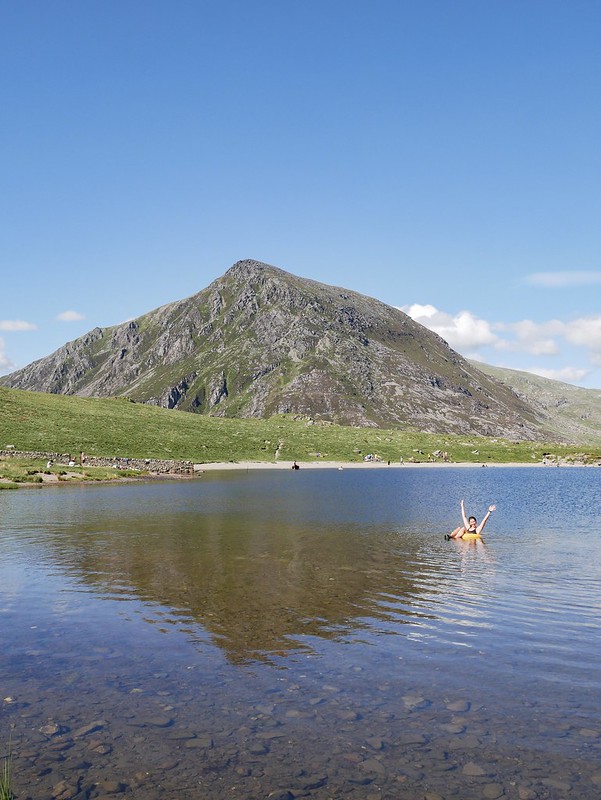 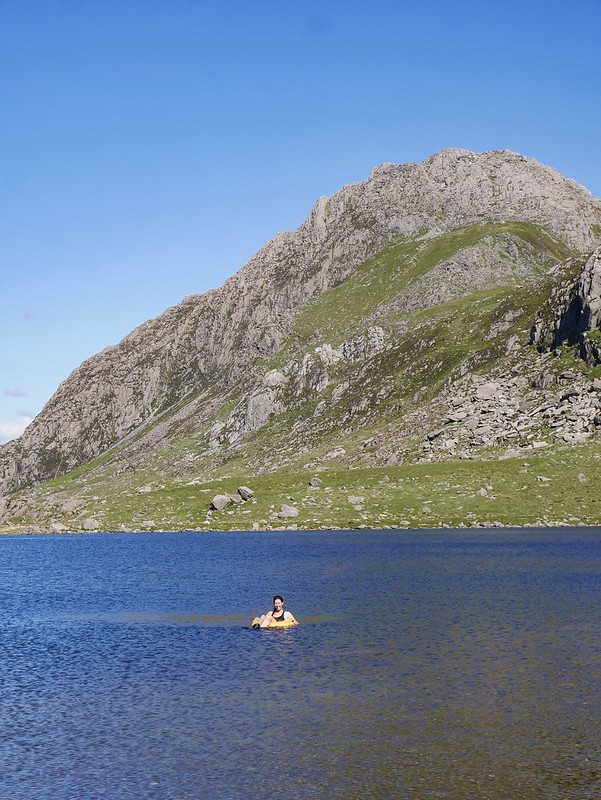 Including all of our breaks we ended up spending 9 hours up on the mountains. We were absolutely shattered by the time we got back to Helga so we had a nice easy dinner planned, a shove-in-the-oven pasta bake with lashings of cheese which we devoured and then we demolished a rice pudding for dessert.

We didn’t want to do to much the following day as our bodies were feeling fragile so we thought a short walk would be nice. First we had to walk 1 klm up the road to the toilet block and try and get some drinking water. It’s so hard to find in the UK, in North America there’s taps everywhere. Luckily a young national trust worker kindly filled our bottles up for us. Hooray. She was a lovely lady who we ended up having a long chat with. We talked about how ridiculous the wild camping had become in the park. On weekends people pitch their tents beside the main road. She said we wouldn’t believe how much human shit she’s had to pick up, which is just awful. We talked about how bizarre the national parks are in the UK. There’s no gate to enter or sign saying ‘welcome to Snowdonia national park’. A lot of the lakes don’t allow boating yet there’s no signs or leaflets explaining which ones you can and can’t boat in. There are villages and towns inside the parks…to be honest the national parks in the uk don’t feel like national parks at all, they’re just scenic areas around civilisation. In the US they have pit-toilets and bins at every carpark, in the UK they‘re like gold dust. The lady also talked about how the housing market in Snowdonia has increased by 30% which has meant she’s been pushed out of the village she grew up in and had to move over an hour away to a town she could afford rent in. Apparently the pandemic caused lots of rich folk from the south east to buy a second home up here. She was pretty upset about the situation, which is totally understandable, and she worries the Welsh culture will fade away with southerners taking over the quaint villages.

Anyway, we chatted for a long time actually and then she recommended a shortish walk to do from where we were parked. It went around the back of the lake, offering fab views of Tryfan’s rocky north ridge. It’s amazing how impossible the terrain looked to hike yet we were up there scrambling away just the day before. We continued hiking uphill to another lake, with steep mountains encircling it and a green tinge to the water from the abundant algae coating the rocks. 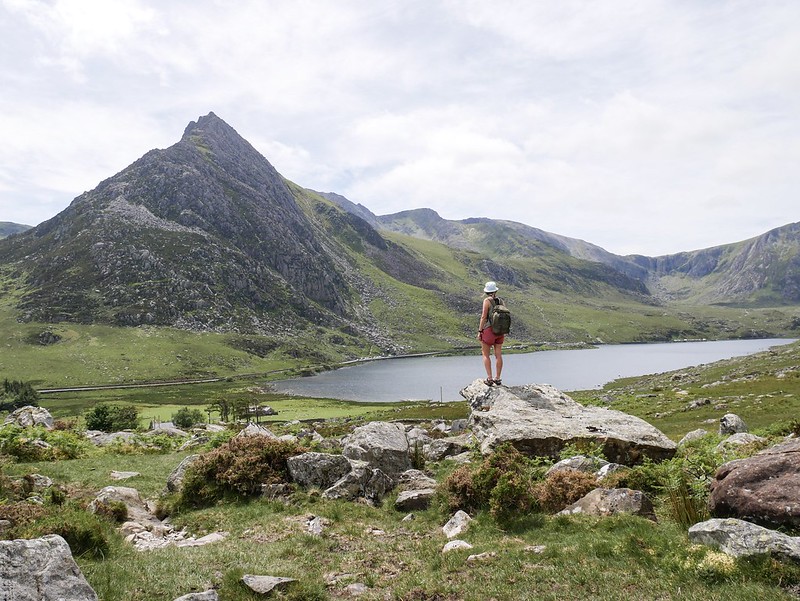 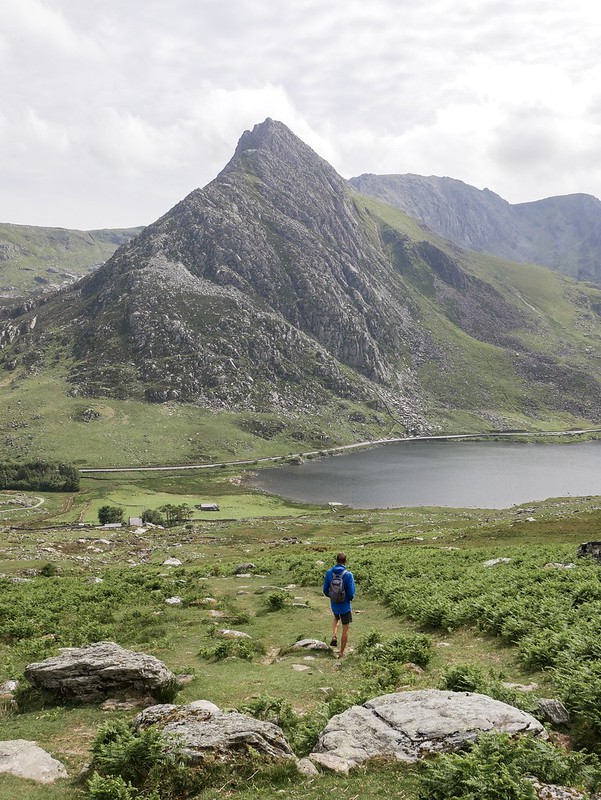 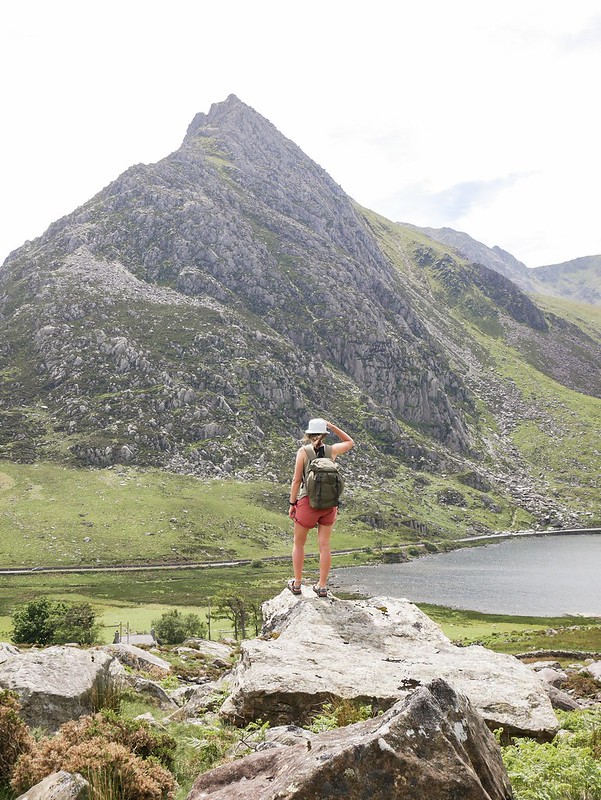 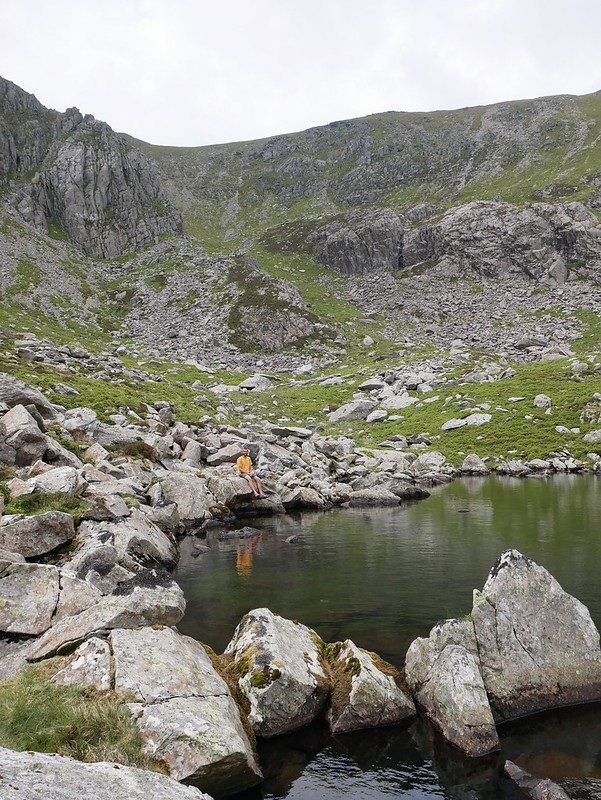 It was actually a bit of an exerting hike after all so we were happy to get back to Helga and drive to a much quieter lake-side spot for an evening swim and a beautiful sunset before our big hike up Snowdon tomorrow. 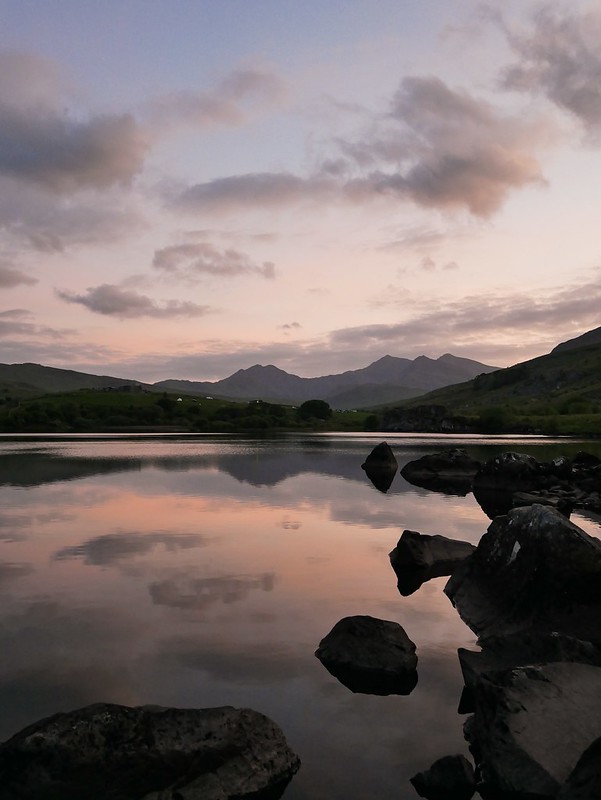 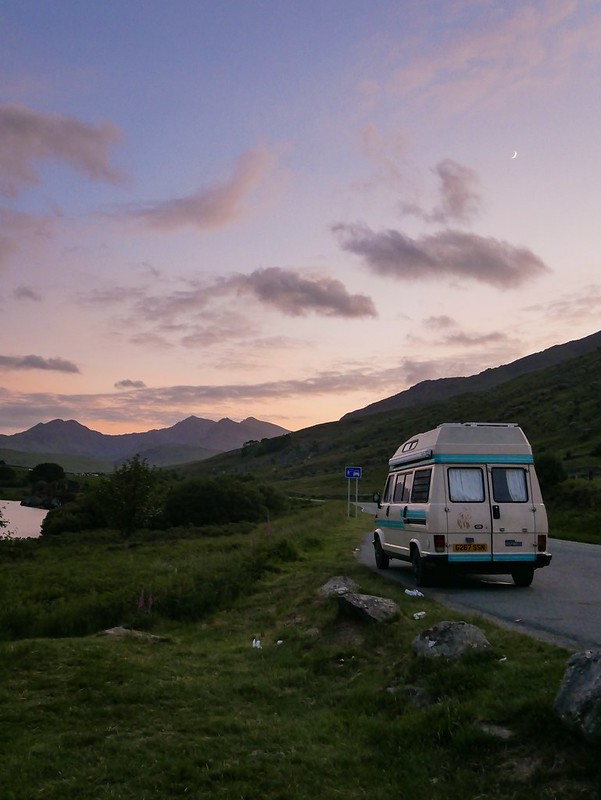