Cardigan Bay in Wales is said to have the biggest population of dolphins in Britain, and one of the best places to see them is from the town of New Quay. This was a spot we visited back in 2015, taking a dolphin viewing boat trip which wasn’t very riveting. But I remember the boat stuck close to the shoreline and at one point the guide pointed up onto the cliffs showing people hiking the coastal route. We realised we didn’t really need to be on a boat, we should of just walked for free, so that’s exactly what we did this time. In fact we had a very long walk because we wanted free parking so we pulled up in a layby a good 3km away from the town. It was a beautiful sunny day and New Quay was bustling with people. We made a beeline straight for the harbour and before we even got there we could see splashing in the water – there were a couple of bottlenose dolphins really close to the harbour! By the time we got there they’d moved on a bit but we could still watch them jumping about in our binoculars which was great. We eventually set off on the coastal walk but we were stopping regularly due to dolphin sightings. Some came quite close to the shore and we even witnessed a little family including a baby swimming very close to its mum. It was so lovely to observe them from the cliffs above. 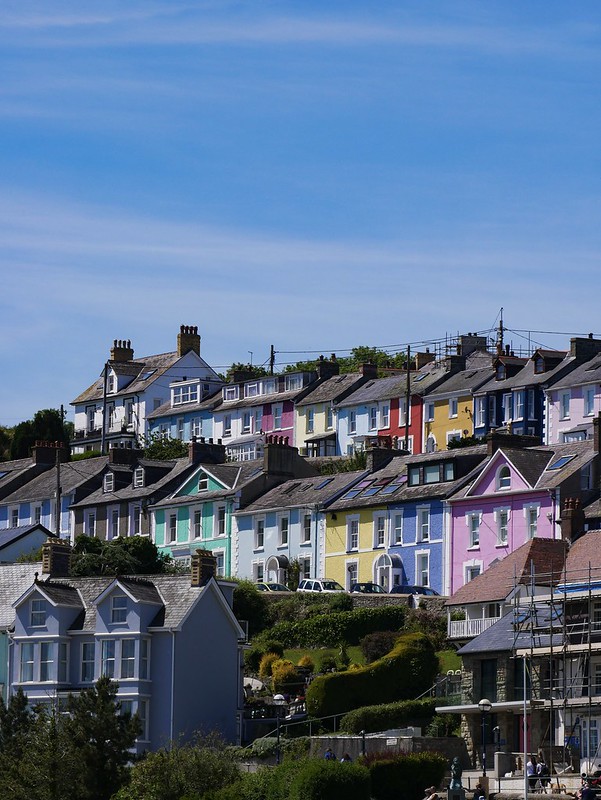 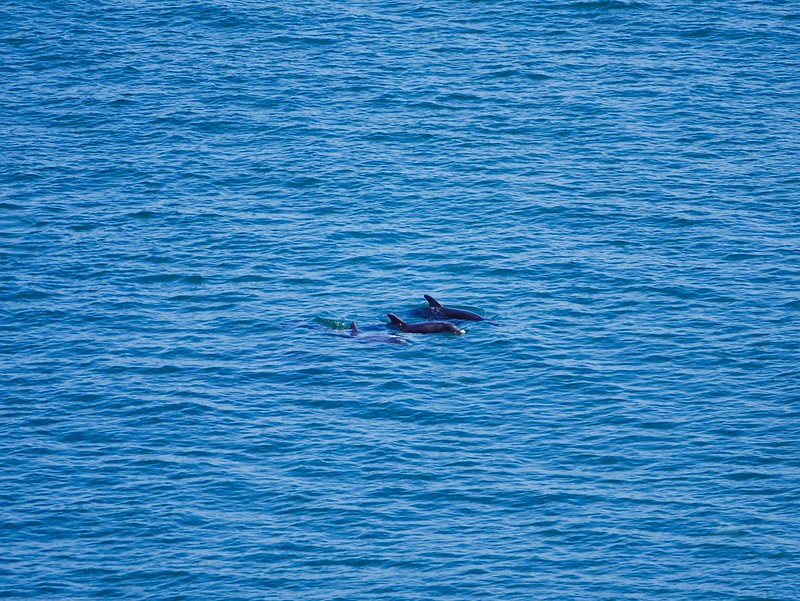 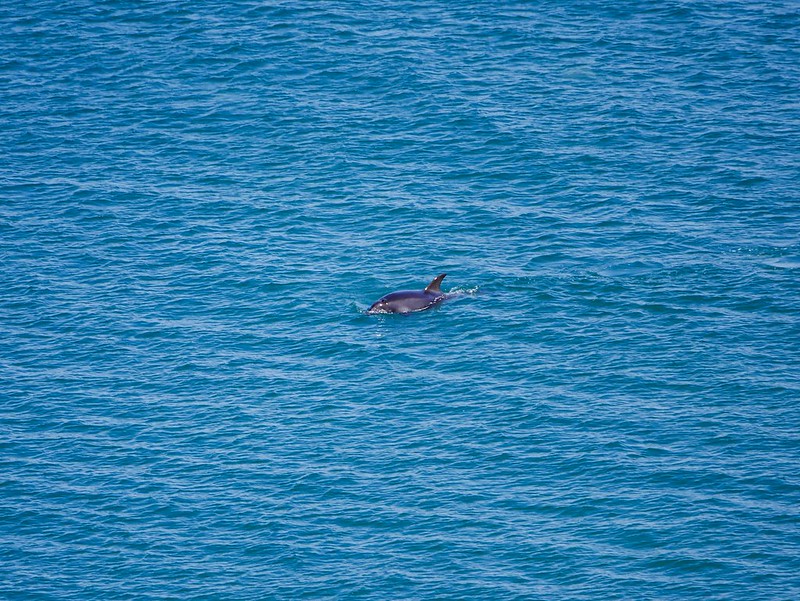 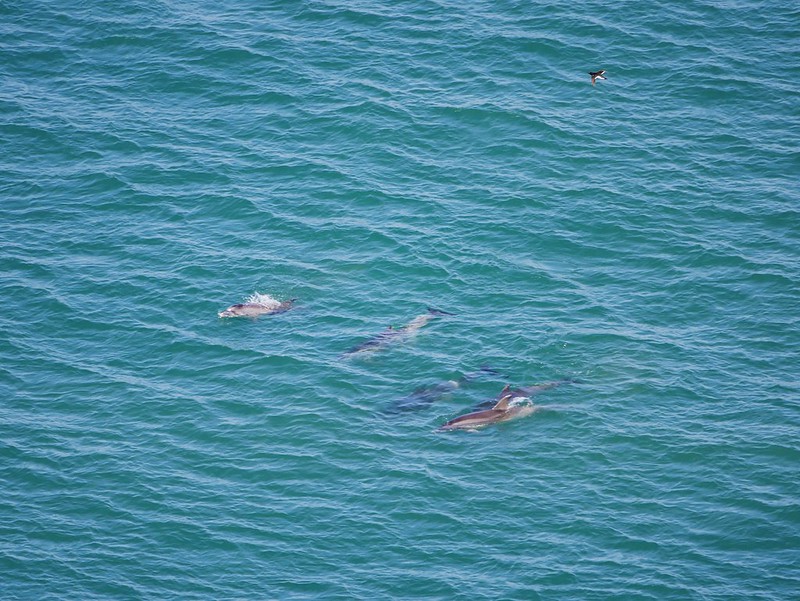 The dolphins clearly liked that area because after a couple of kilometres we didn’t see any more. When we arrived on a little beach we took it as our queue to head back but we wanted to walk a different route. We took an inland path, following a stream which meandered through a lush forest. We were desperate for a refreshing wild swim so we excitedly plunged into a pool. There was a small waterfall which Craig stood under and I found a fun natural slide and a cool gully under the water, it was literally like a rocky version of a water park. It was all fun and games until I got out the water and noticed a tiny black worm on my stomach….and another one…and another one…oh dear lord what the heck is going on? They weren’t like leaches, they were just minuscule worms. Ewwwww. I didn’t know if it was from the water or the rock I’d sat on but I decided a second plunge would be a good idea to get rid of some of them. Needless to say the refreshing feeling I had afterwards was ruined entirely by me feeling paranoid and itching myself. 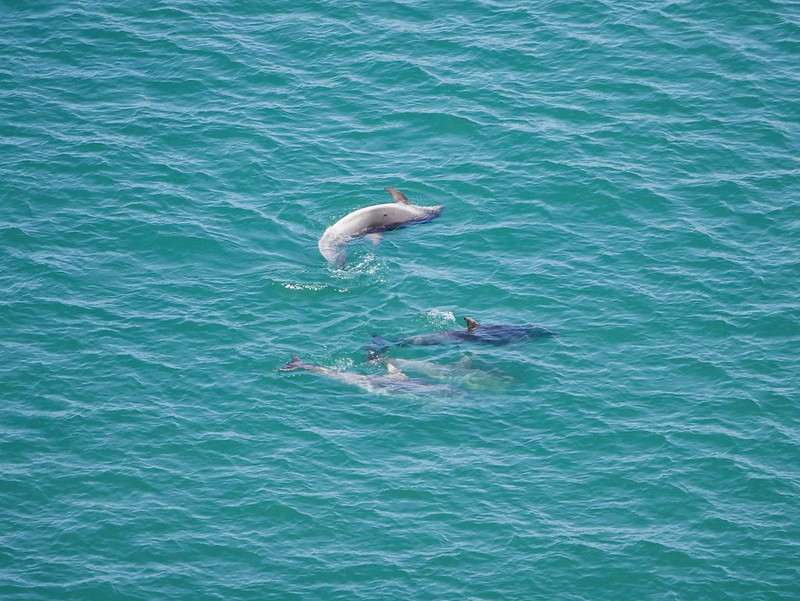 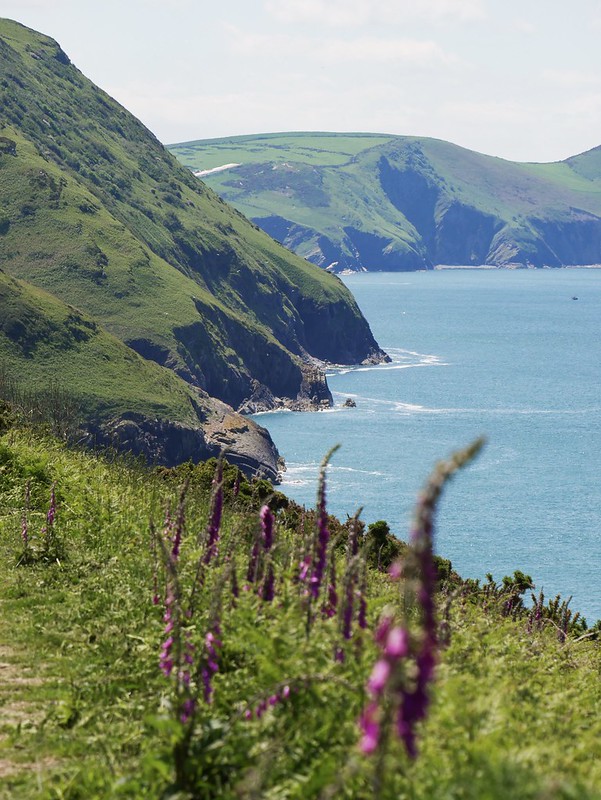 When we got back to New Quay we decided to treat ourselves with an ice cream for me and chips for Craig. As we waited for Craig’s chips to be cooked we spotted a lone dolphin swimming in the bay really close to the town beach. He stuck around for a while, popping up for some air where we least expected him and then vanishing again. We sat on the harbour wall, enjoying our treats while watching the dolphin swimming just 50m from us. Suddenly we spotted a big splash in the distance, there were two dolphins putting on a right show. They were somersaulting in the air and jumping in perfect arches. We had a great view with our binoculars and zoom lens and it was the perfect end to a lovely day. 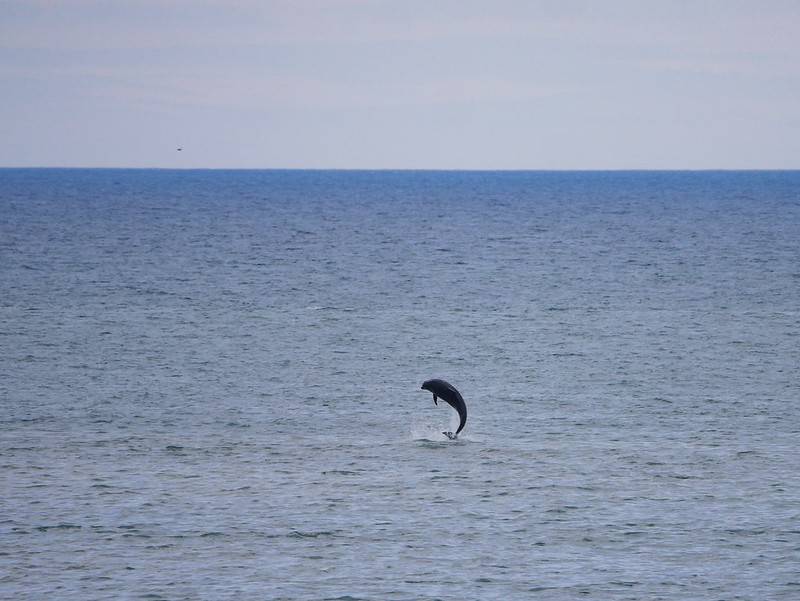 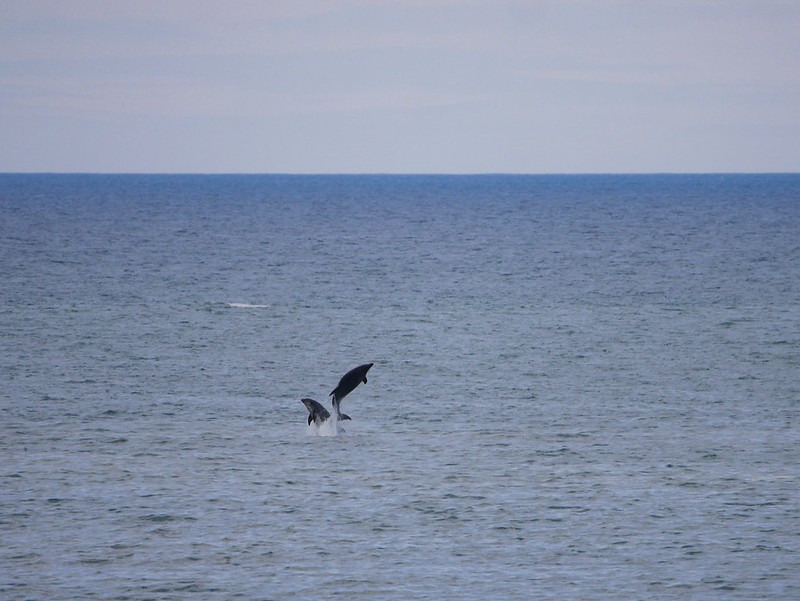 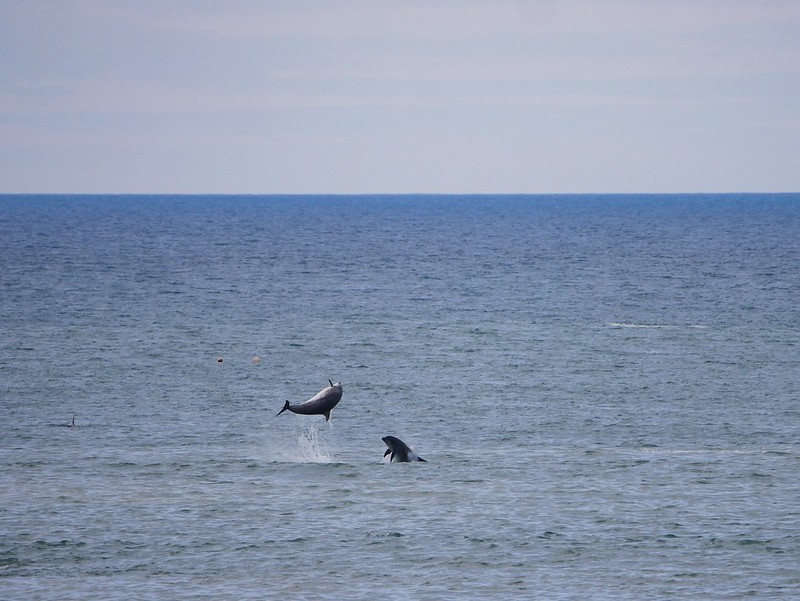 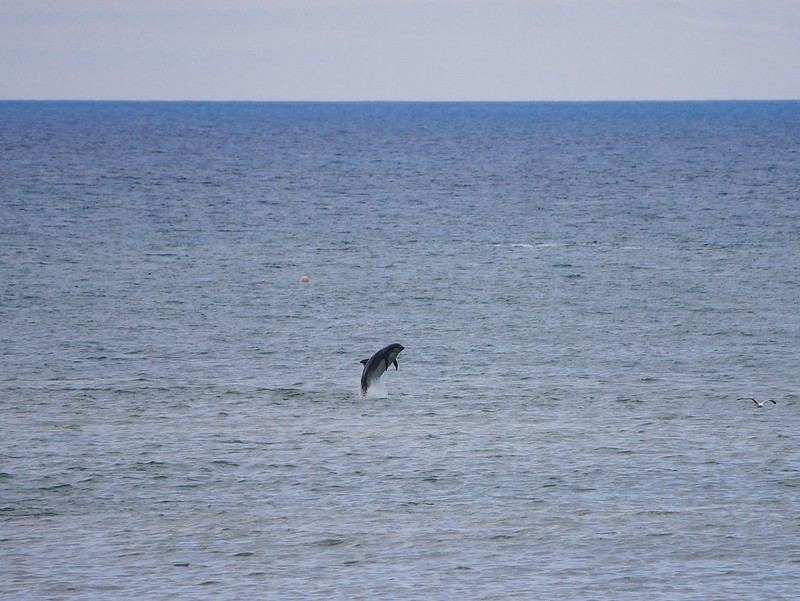 We didn’t want to cook dinner in the grim lay-by we’d parked in so we decided to drive north a little and we pulled up at Aberaeron. We picked this spot because they had parking right by the beach and it was just a short detour off the highway. Low and behold I recognised the village straight away “we’ve been here before Craig!” It was another spot we’d visited in 2015, and an easy one to remember because the village is picture-perfect, the houses are all painted in a kaleidoscope of colours and set around a picturesque harbour. It was delightfully quiet too and we had a lovely view of the stoney beach in front of us and the colourful houses behind. 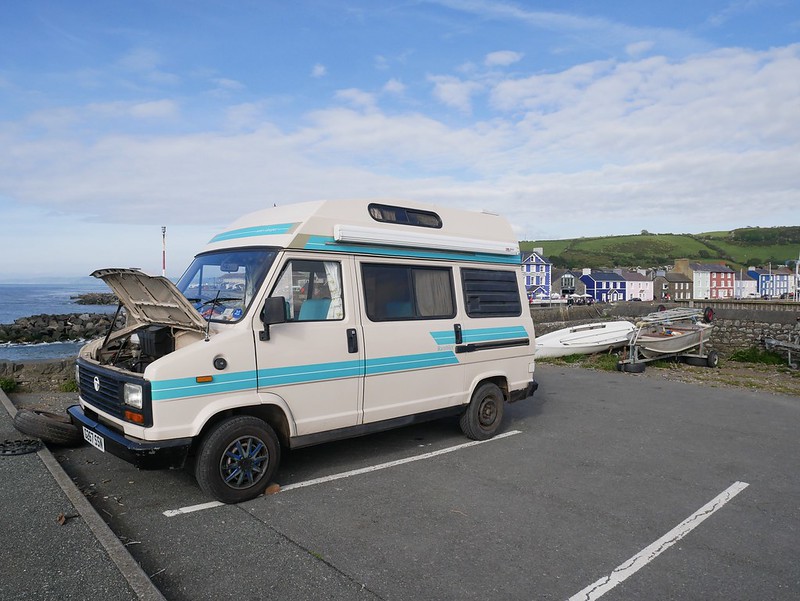 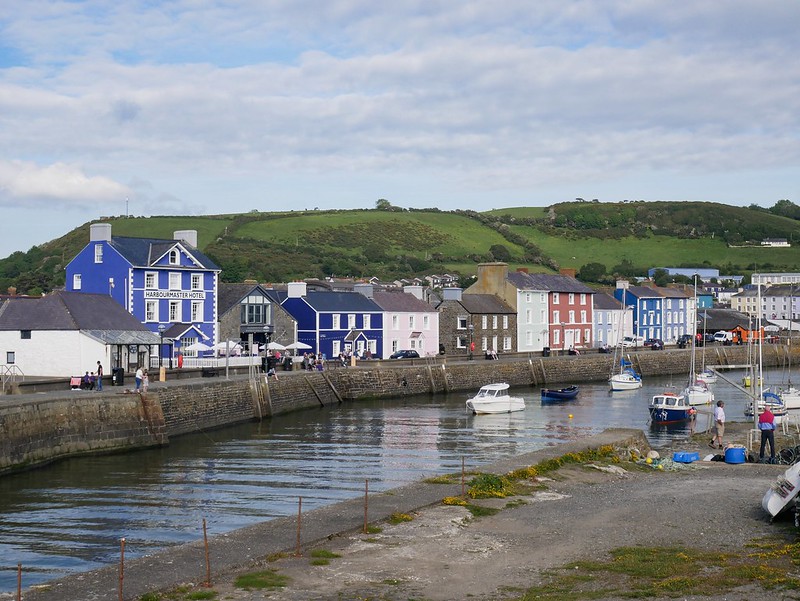 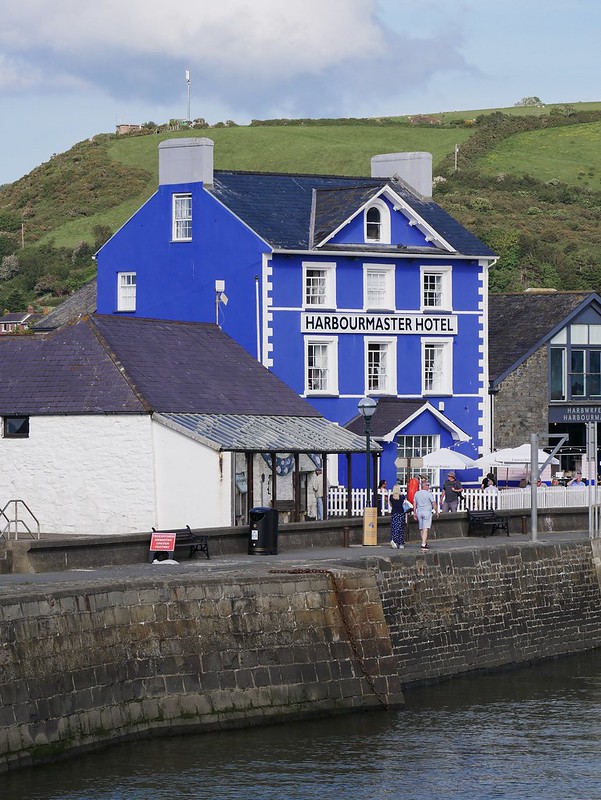