I find it hard to travel slowly when there’s a place I’m really keen to visit and I just want to get there as soon as possible. North Wales, mainly Snowdonia has been that place for me. We’ve visited a couple times before and I just love the mountains there and that’s something our roadtrip has lacked so far. The mountains we’ve visited in Wales up until now have been more like hills in our eyes. A mountain shouldn’t be round or grassy, it should be a rocky mass shaped like a pyramid. 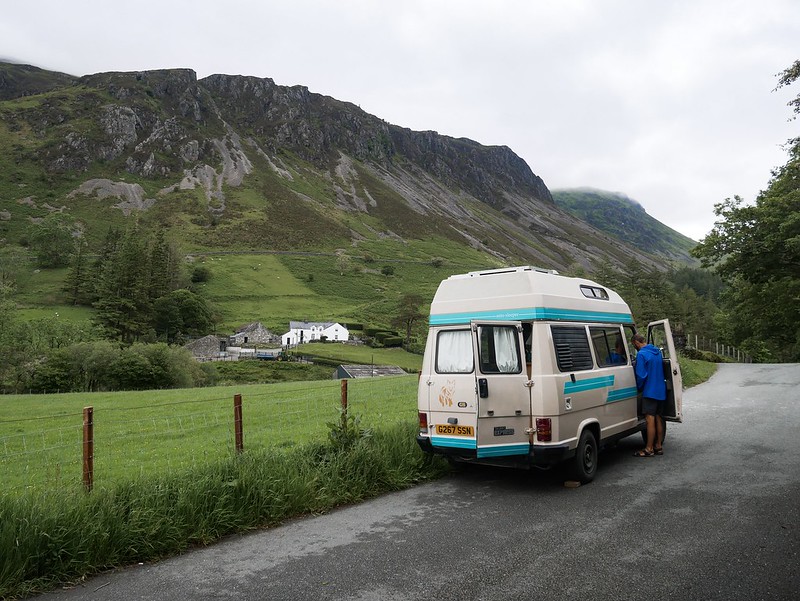 So with that said, we headed north and entered Snowdonia National Park on a particularly grim day. So grim that we decided there was no point even hiking so we spent the day doing some research and baking cookies in the van.

We woke to slightly better weather, clouds were wrapped around the tops of the mountains which rose steeply with lush green slopes and rocky tops. We were optimistic and thought the cloud would either look amazing in photos and drift through the valleys or it would just lift and give us clear views…so we set off on a hike to Cadair Idris, an 893m mountain. 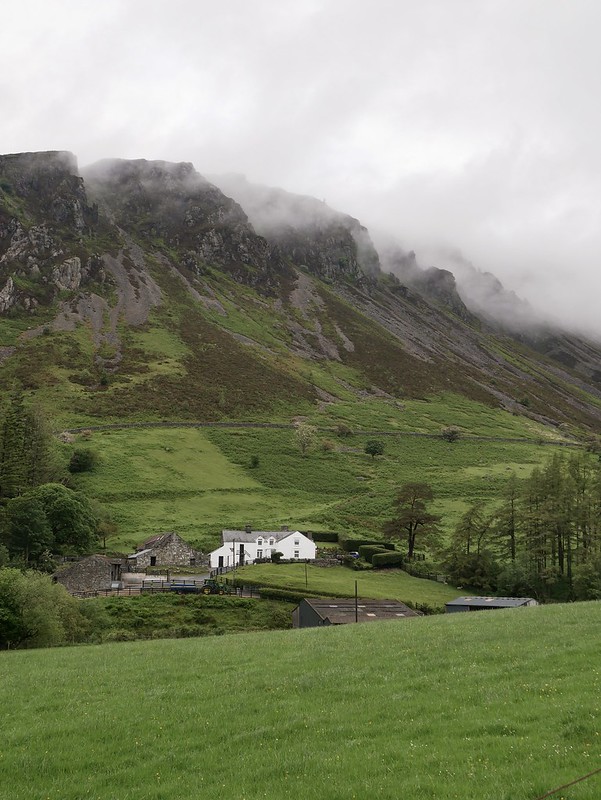 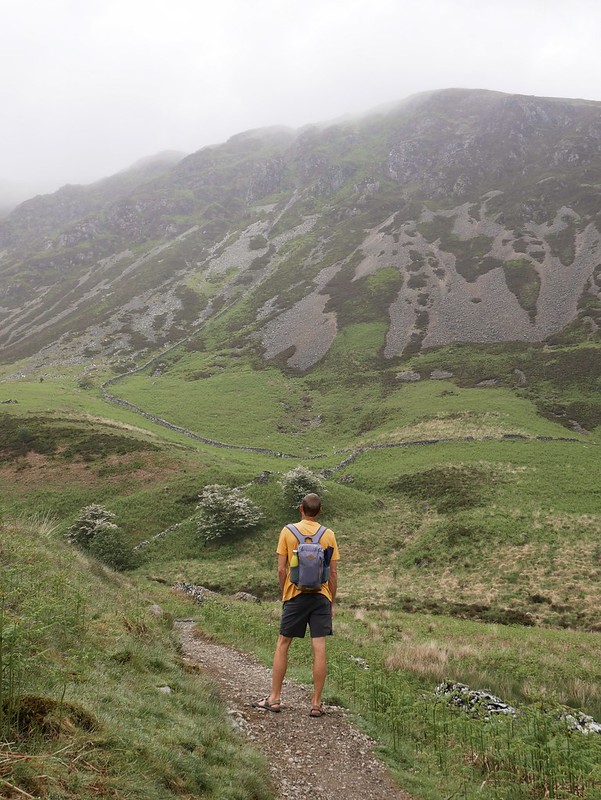 It was a tough start with relentless steps taking us up and I was starting to feel rather hot and uncomfortable. We followed a river with small waterfalls for a while and then we arrived at an area encircled with mountains…or hills, it was hard to tell with the clouds! Soon enough we were at the lake Llyn Cau which would normally be a rather spectacular sight in good weather. We persevered uphill and entered the layer of clouds where we were greeted with a total white-out and drizzly rain. 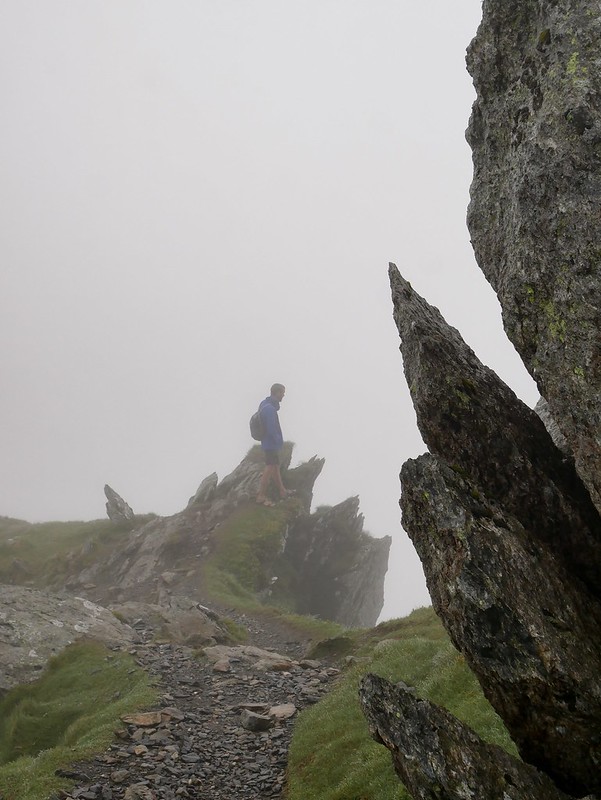 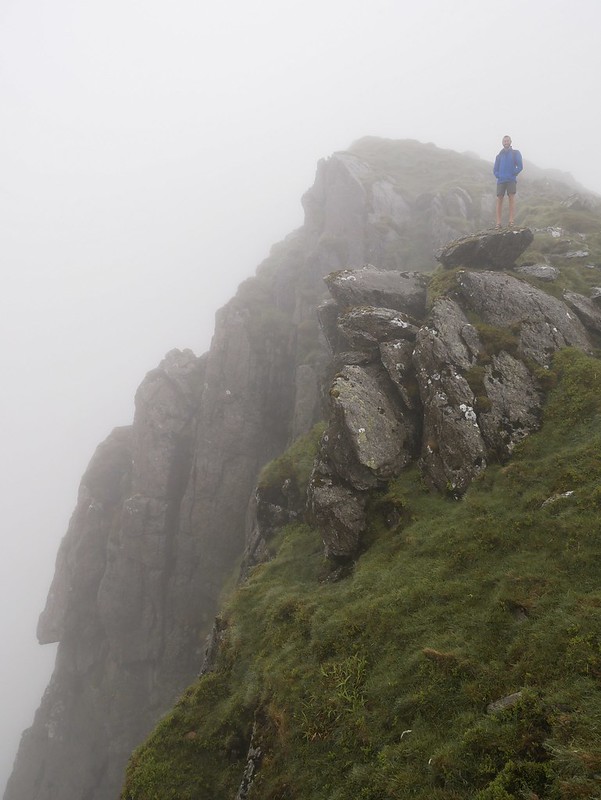 The trail took us over two peaks before we arrived at Cadair Idris, and except for a moment where it cleared enough to see some dagger shaped rocks by the footpath we didn’t get a single view…rather demoralising. It was windy as hell too and extremely easy to lose the path. For a long amount of time we were walking along a flat plateau and without a map it would of been impossible to find a way through. The path was extremely faint and easy to lose and without any landmarks visible it would be an extremely easy place to wind up lost…and that’s kind of what we did. Well we were never lost as we had my map, we just missed our turn off and instead of going back the way we came (uphill quite a chunk) we decided to cut sideways and try to join onto the track. Our ‘shortcut’ ended up being thirty minutes of bushwhacking, unsure if we would get to a cliff and have to turn back. Thankfully we eventually walked beneath the clouds and had a view of the valley and a lake below us, and soon enough we were back on the trail. It was quite a pretty walk back to Helga though, the haziness had left the sky and the clouds hugged the green mountain tops again. 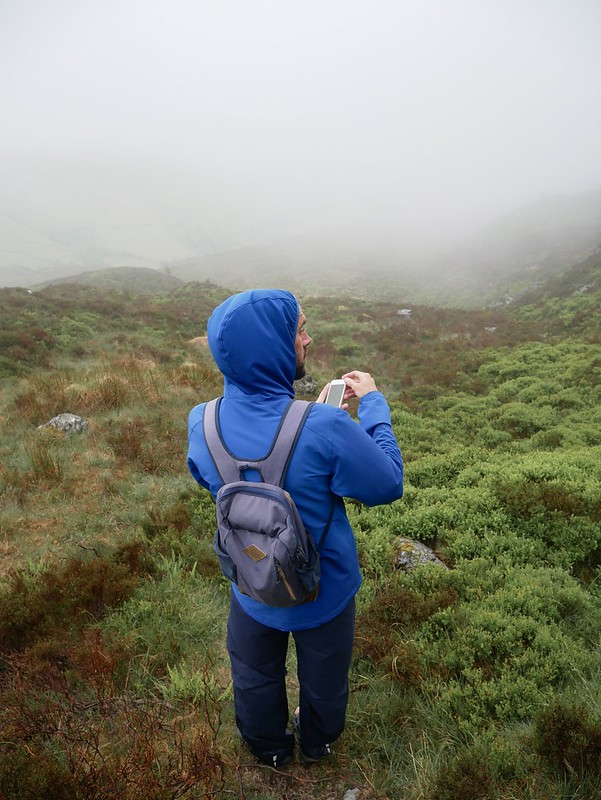 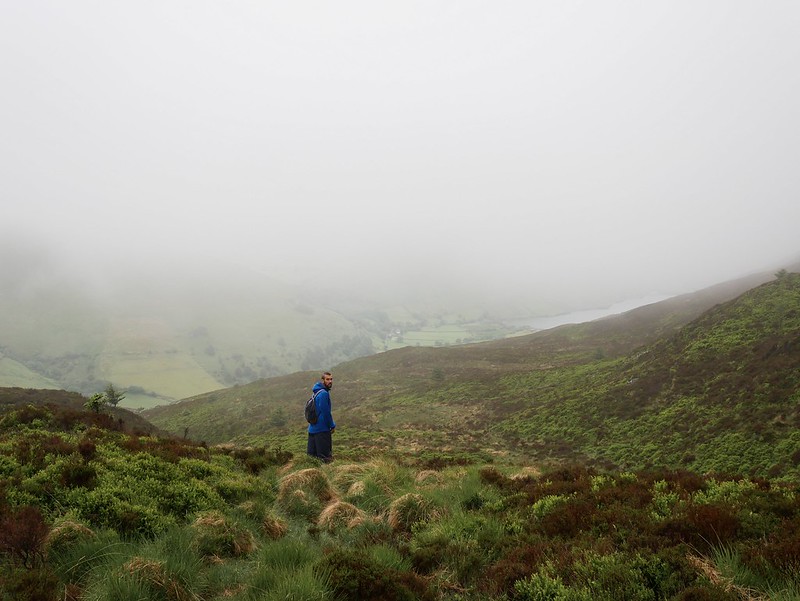 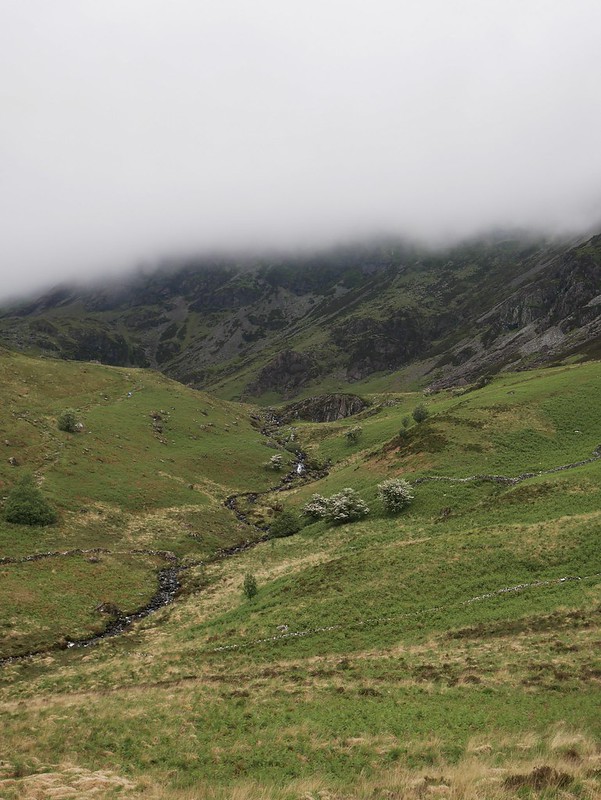 The bad weather hung around so we camped in a nice forested area while it poured with rain. The clouds were even lower today and we could barely see 30m up the road. There were a few dog walkers around in the morning so when nature called I had to put my wet weather gear on and search for an appropriate place: not in sight of anyone, away from a water source and dig-able ground. The terrain was horrendous with a steep bramble covered slope. I tried clambering up a few sections but my legs were getting ripped from the thorns. So I headed a different route, walking along a section of dead reeds until the ground gave way and my foot sunk a foot down into a pool of peaty water. Oh my god. I almost gave up but I decided to cross the road to another forest which was idyllic and I found a suitable spot to dig a hole at last. When I got back to Helga I was drenched and had blood dripping down my legs and mud all over my feet. I probably looked like I’d been lost in the woods for days instead of 15 minutes.

After being lazy due to the mist and rain we finally made a move in the afternoon and headed for the tiny village of Croesor. There was a rather nerve wracking single lane road to reach the sleepy village and we took a quick stroll when we arrived. Much to our surprise they had an outdoor pool with water flowing in from the river. It looked rather spooky in the misty weather, the water was dark and creepy but I’m sure it would be very appealing in the sunshine. 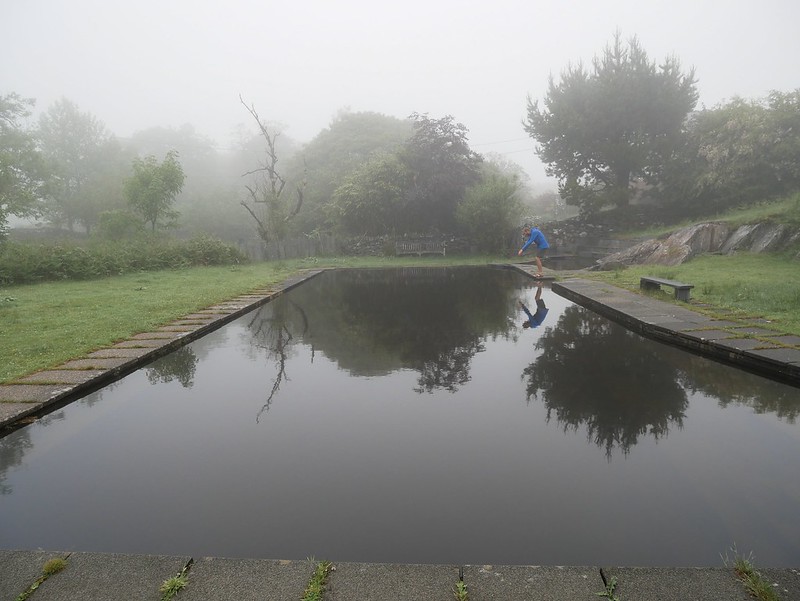 We came to this village to hike Cnicht, supposedly the ‘Matterhorn of Wales’ if you’re not familiar with Matterhorn it’s Switzerland’s most famous mountain due to the unusual pointy shape. Without seeing the mountain I was pretty confident that it wouldn’t be comparable to a peak in the mighty Swiss Alps so I didn’t get my hopes up. We had to decide whether to hike it in the late afternoon as the forecast said the cloud would clear, or wait until the following morning…and we opted to risk it and go in the afternoon, hoping that we’d see some dramatic scenes with a Swiss mountain rising above the clouds (I’m allowed to dream). It was a big loop hike we were attempting with very faint trails at times. We were led through lots of old slate mines that had been abandoned. We were the only people hiking in this foolish weather and the hazy mist gave the area a monochrome filter as if we had been teleported back to the olden days when the mine was open. 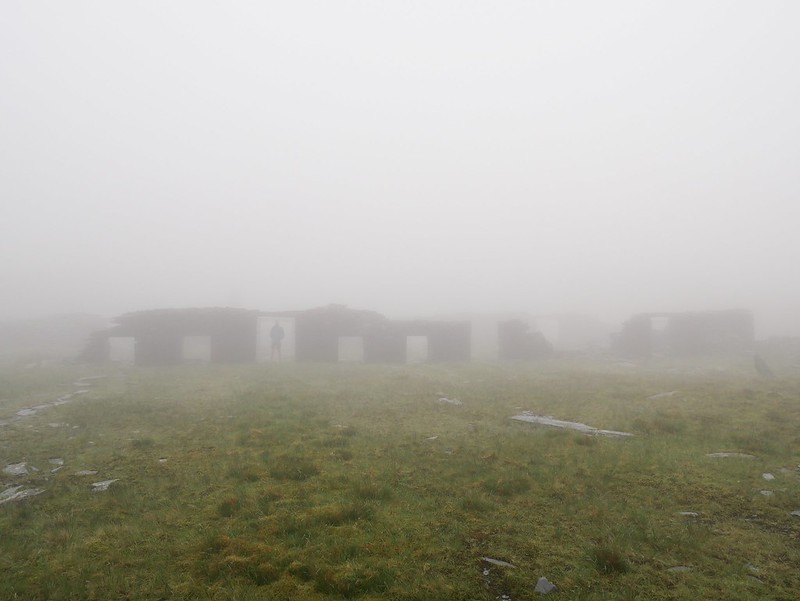 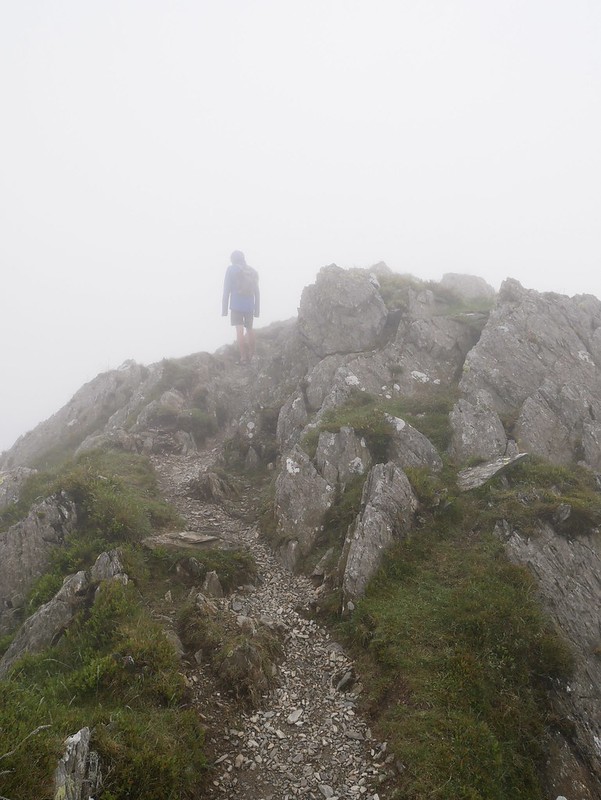 After a few days of rain most of the trail was just soggy grassy puddles. I’m very grateful to have my sandals as my hiking boots would of been drenched and weighed me down. The cloud was due to lift but after two hours of hiking it was still thick and I lost any optimistic thoughts of it clearing. We could hear waterfalls before we saw them slowly appear through the mist. 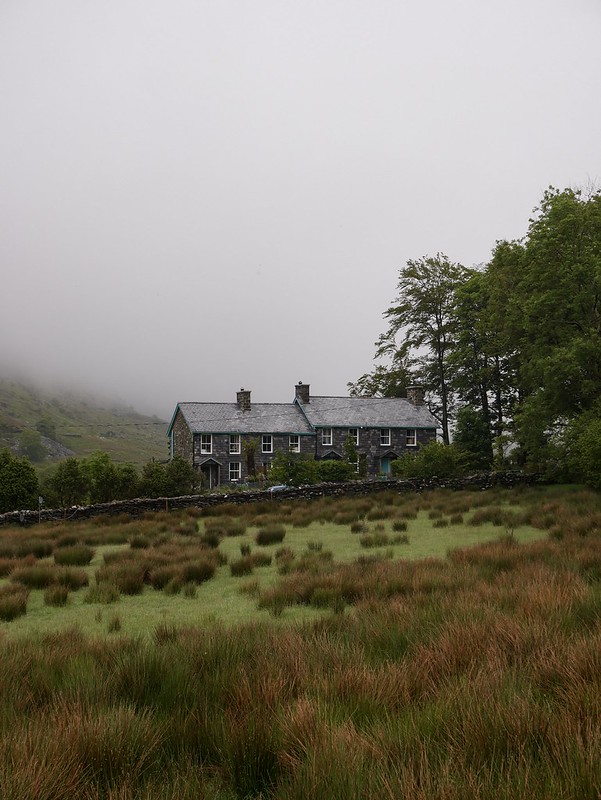 The summit of Cnicht is said to be a grade 1 scramble but before we knew it we were at the top and making our way back down with barely any scrambling involved. Maybe if the cloud wasn’t around we’d see sheer cliff-edges and it would be a little unnerving but we found it very easy.

It was another pointless hike in my books, 5 hours walking through a cloud so it literally could of been a foggy day in Slough and I wouldn’t be able to tell the difference. As we woke the next morning and left the tiny village we finally got a view of the Matterhorn itself – and to be fair it was a pretty cool mountain with little clouds drifting past the peak, but it definitely didn’t resemble Switzerland. 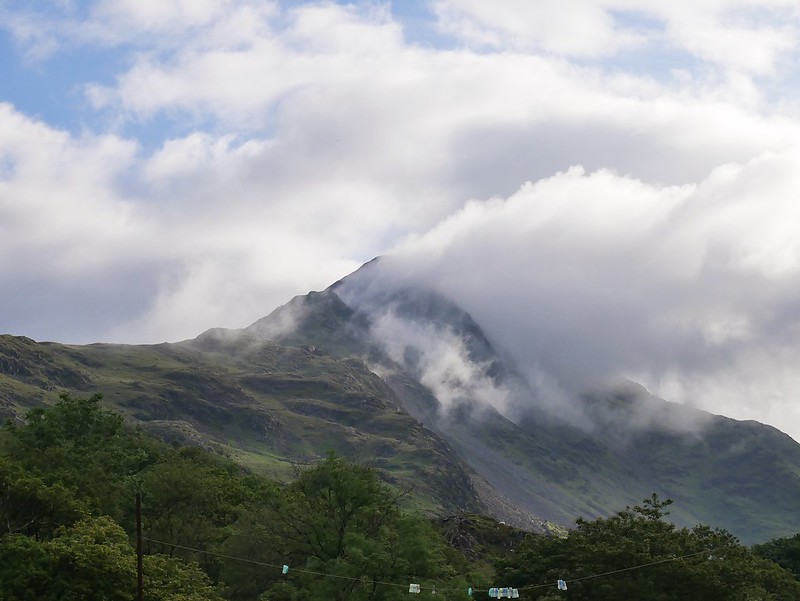