We arrived in the colourful walled town of Tenby, a place we were very fond of on our previous visit 6 years ago. The town has rows of pastel coloured houses that look like a pack of refresher sweets. On either side of the town are beautiful beaches with crystal clear water lapping the shores. We started our day by walking along North Beach where we spotted a gigantic jellyfish washed up on the shores. We’ve only seen them this big in Asia, it was about a foot wide!! 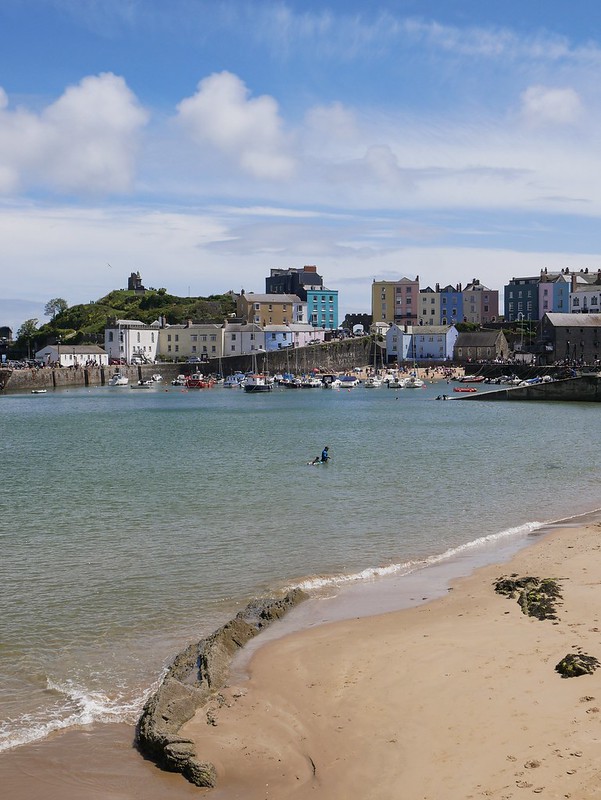 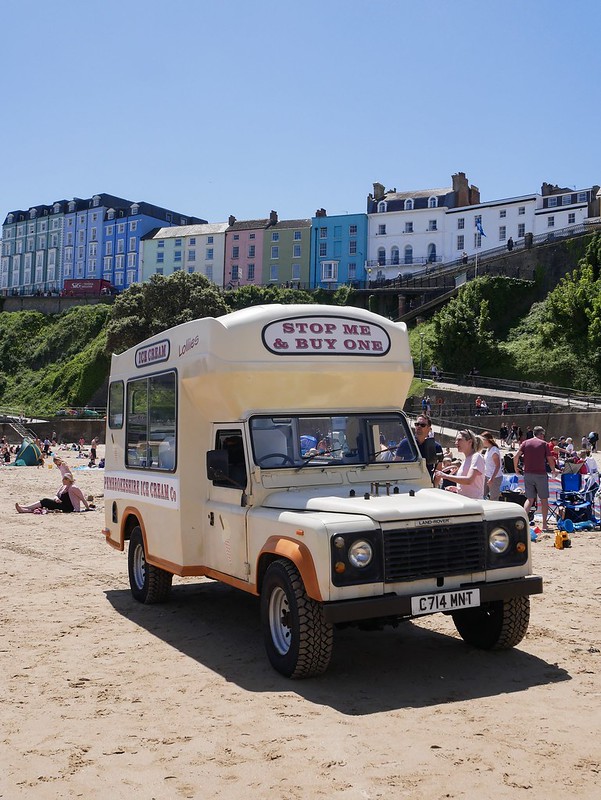 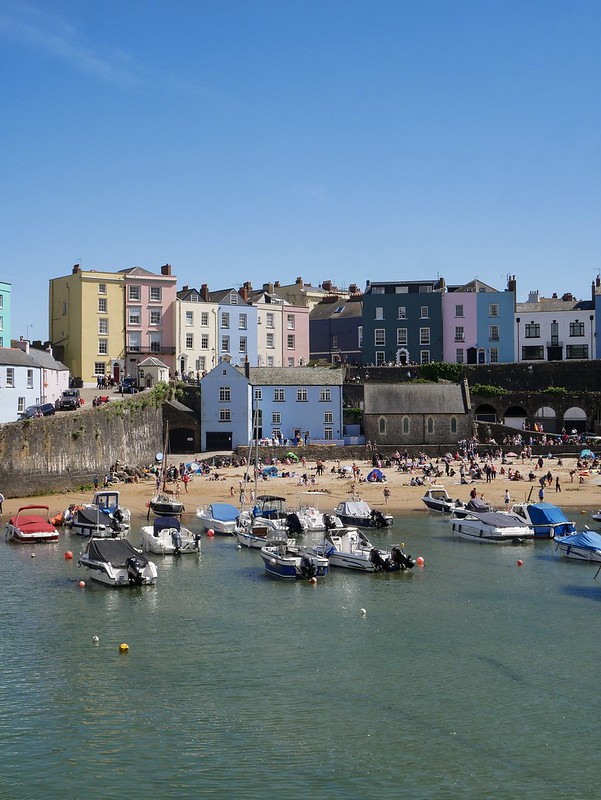 The town was surprisingly busy, it was good weather but with covid still lurking around we were surprised at the crowds. To be honest it didn’t have the charm that we experienced on our first visit, it was still nice but maybe the novelty had worn off on us. I remember on our last visit we found a shop selling 99p ice creams for 99p which is unheard of because they all charge about £3 for them these days. So I was determined to find the same shop and buy one but we never found it, maybe the shop went bust after not making any profit on the ice creams. 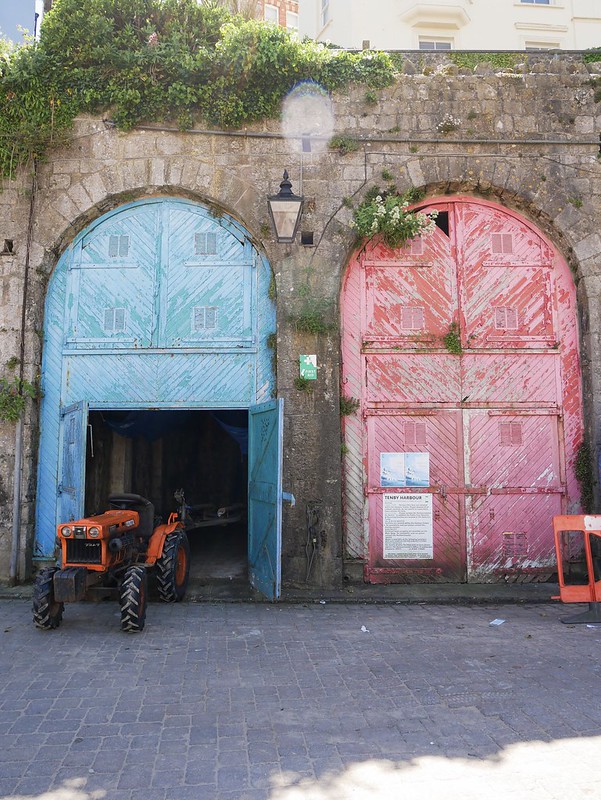 As we walked along the narrow roads we spotted a big Alsatian dog inside a car without any windows open. It was a hot day so we were concerned for the dog, especially as there was a parking ticket on the car which suggested it had been there a long time! Another couple noticed us peering in the car and were worried too so we left them at the car while we found some community support officers we’d just passed (great timing). As we arrived back the owner was in a big argument with the couple as the lady had opened the door. Apparently the dog was getting stressed inside the pub so the owner thought it would be better to lock it inside a car without any windows open. Geeeez. It was all getting a bit dramatic for us and we’d got the officers so we left them to deal with the terrible dog owner. We enjoyed a little relax time on the beach and then headed off without my 99p ice cream. We decided to have dinner with a lovely sea view before finding a quiet lay-by the sleep in. 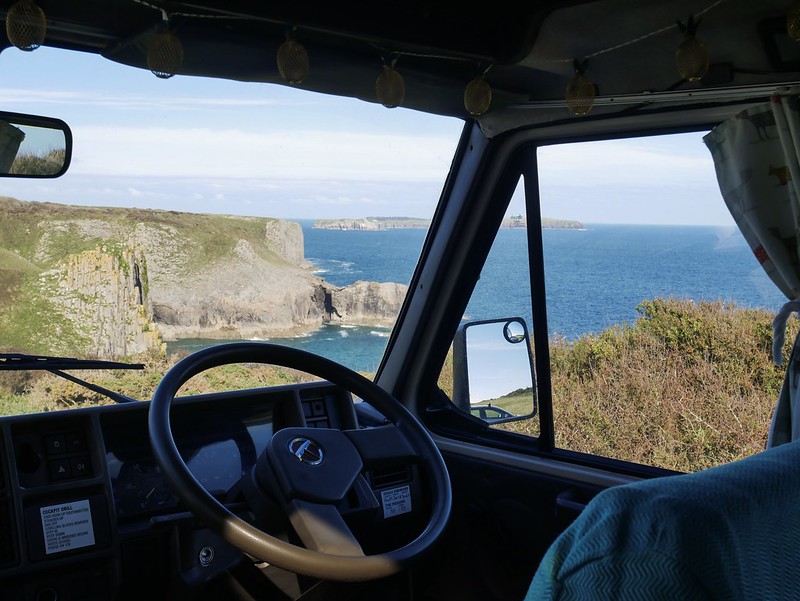 The next day we headed to Bosherston Lily Pond where we embarked on a hike to the coast. Our main goal was to visit Barafundle Bay, a beautiful stretch of beach. The weather was perfect with just a gentle breeze and clear blue skies so as soon as we arrived at the idyllic beach nestled into a wide cove we decided to stay put and sunbath for a while. The sea was crystal clear and we were very tempted for a swim but it feels like a hassle to swim in the sea when you live in a van. I need to wash the salt water off and we have limited water so we rarely swim in the sea, that’s why we love swimming in freshwater lakes and rivers so much. 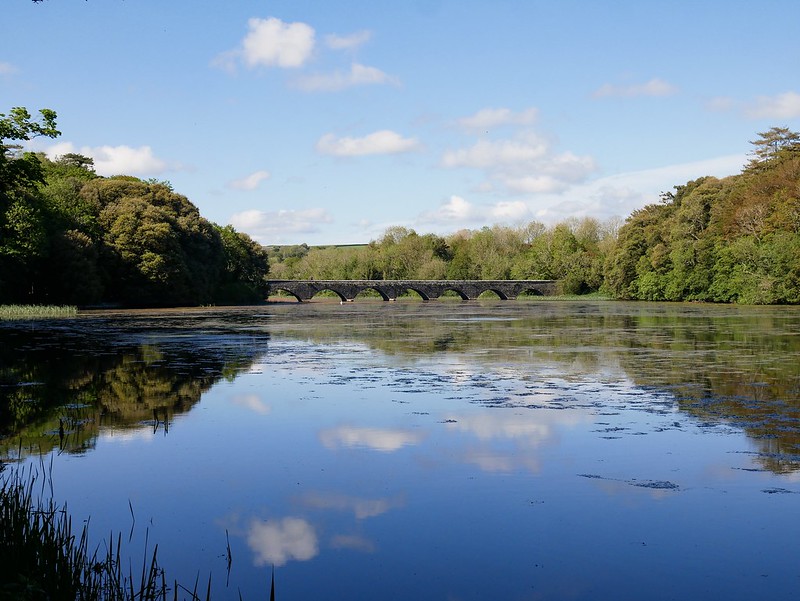 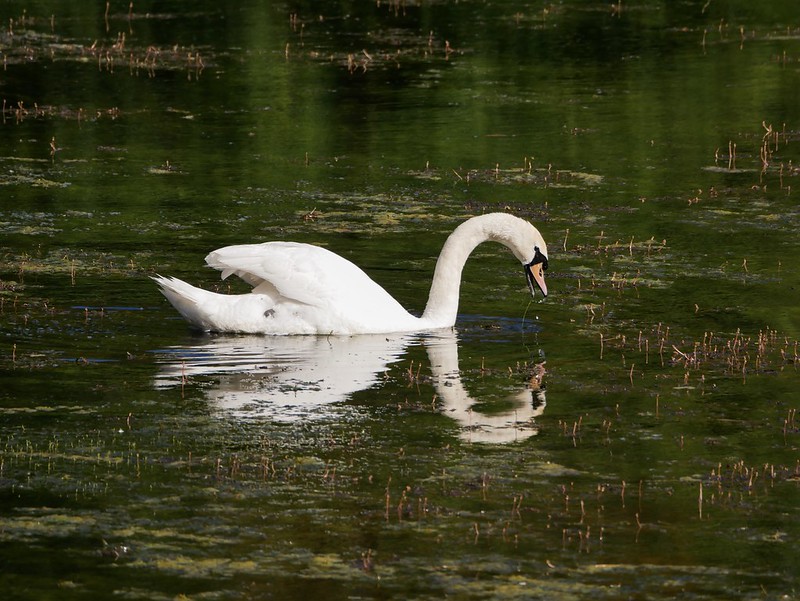 The beach was fairly busy but everyone had space around them and compared to Brighton on a hot day it looked almost empty! We spent a few hours basking in the sun before we continued our hike along the coastline. As we exited the beach we were led up a hill through the most beautiful forest. The trees were wrapped with vines and we got glimpses of the tropical looking beach below us. 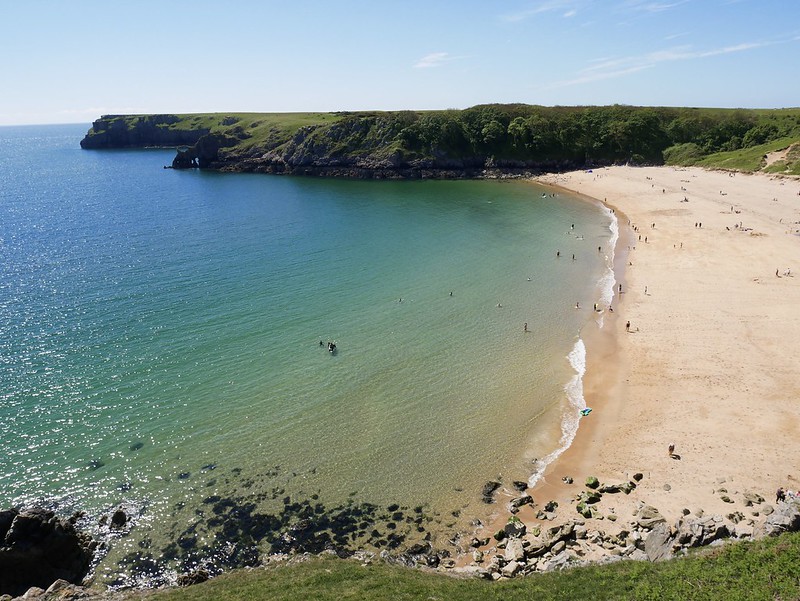 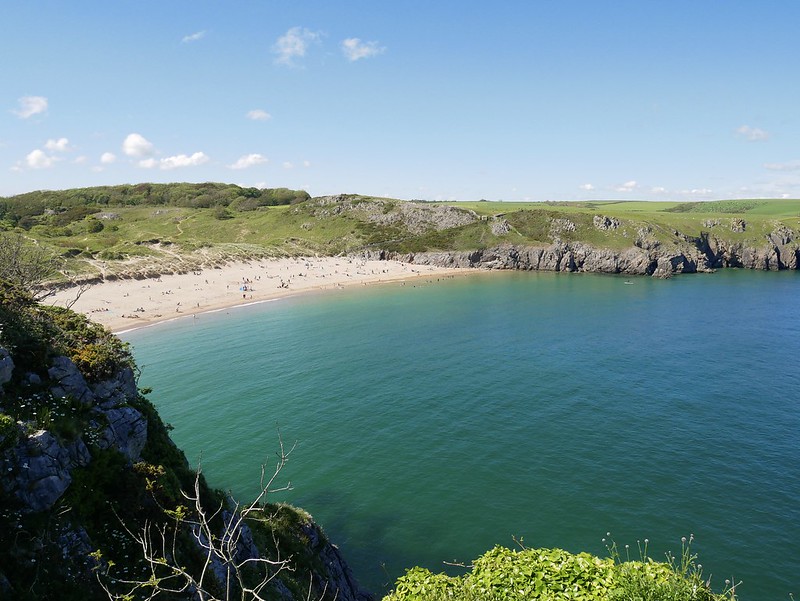 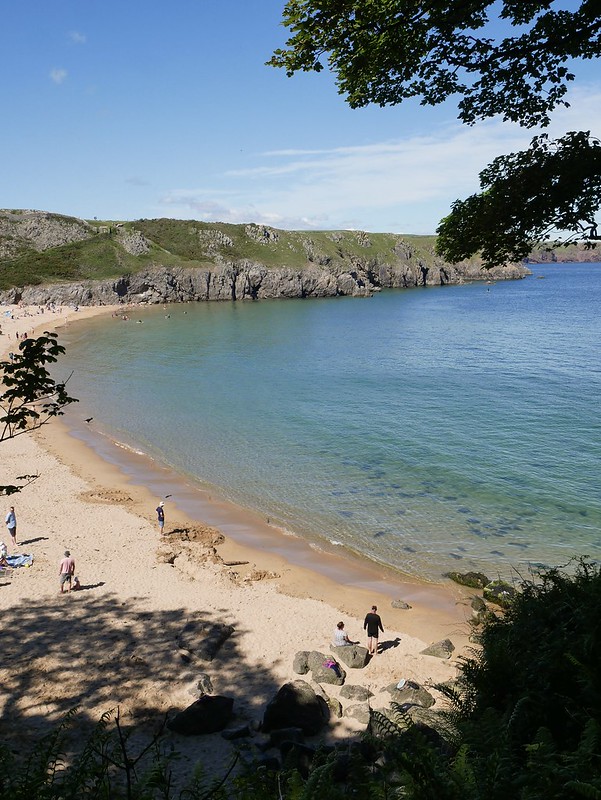 The trail led us along the cliff tops where we could peer down to hidden coves with clear emerald water. It was a long walk in the end so once we got back to Helga we drove to a nice spot with a view of the sea for dinner. There were interesting rock formations rising out the sea like pillars and the tops of them were white with bird shit. They were absolutely swarming with razorbills, a black and white bird. It’s funny because I read someone’s review about this area and they were raving about seeing penguins – because I’m obsessed with wildlife I know penguins only live in the Southern Hemisphere and they certainly can’t jump up a 50m tall cliff shooting out the sea. Some people are going to read his review and be seriously disappointed when they realise it’s not a penguin, although I’ll give him some credit as they do look similar. 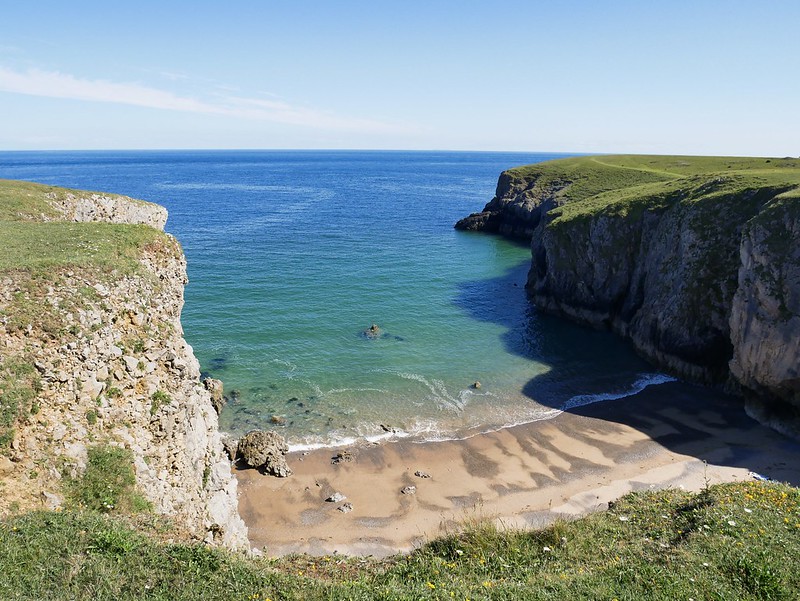 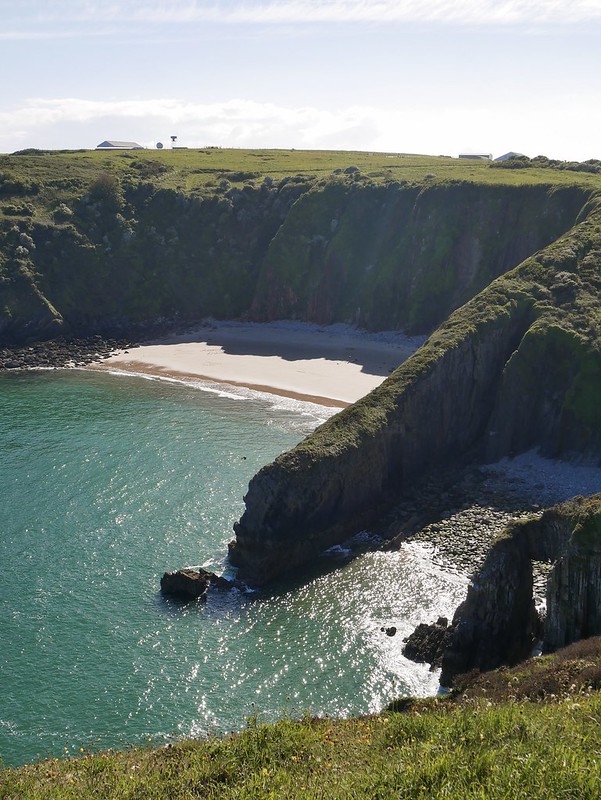 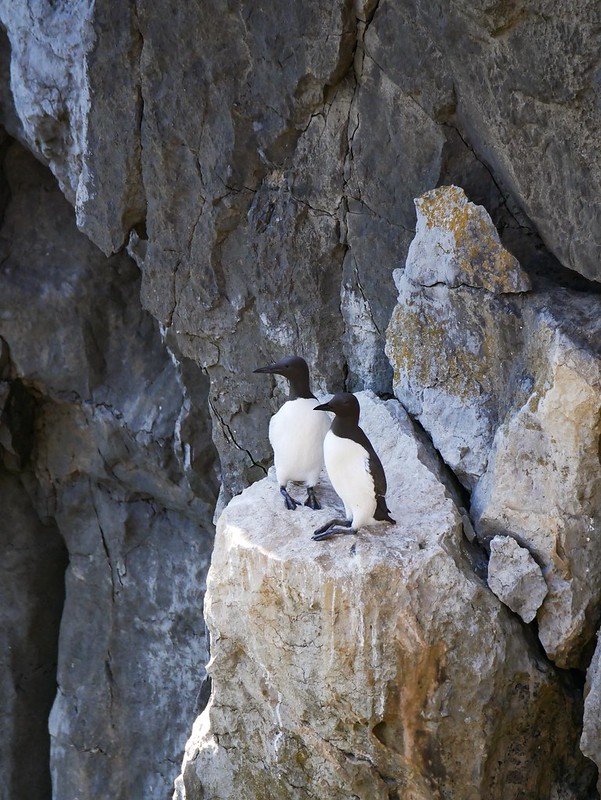 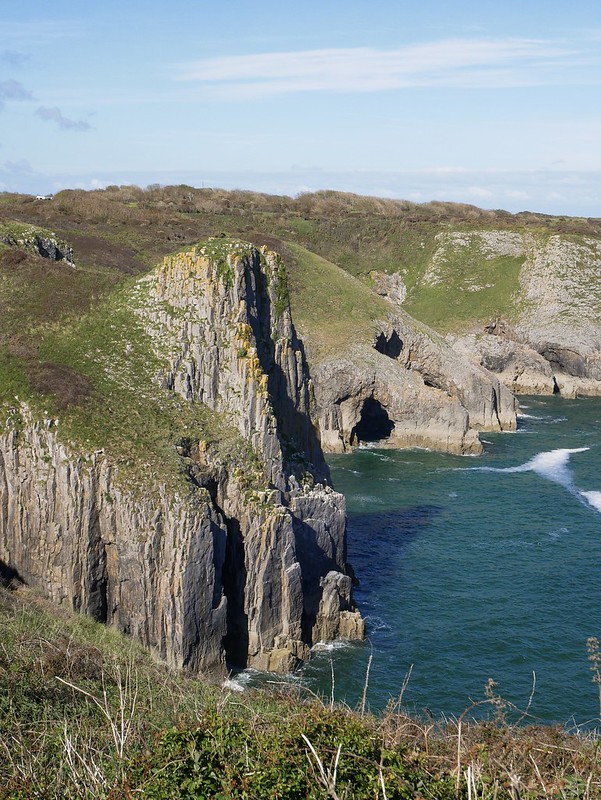 We knew the area was strict with free camping so after sunset we headed off to a discreet lay-by. Sadly we were rudely awoken at 5:30am, there was so much noise outside, so I peered out the window and discovered the road was lined with army tanks. They clearly didn’t mind us being there or they would of moved us on so I tried to go back to bed but they made such a racket that we got up at 7am. This time when I pulled back the curtains the road was clear but there were two warning vans for oversized vehicles and a tank in front of us – not our average campervan neighbours. We drove off without having our breakfast and they all gave us a jolly wave. 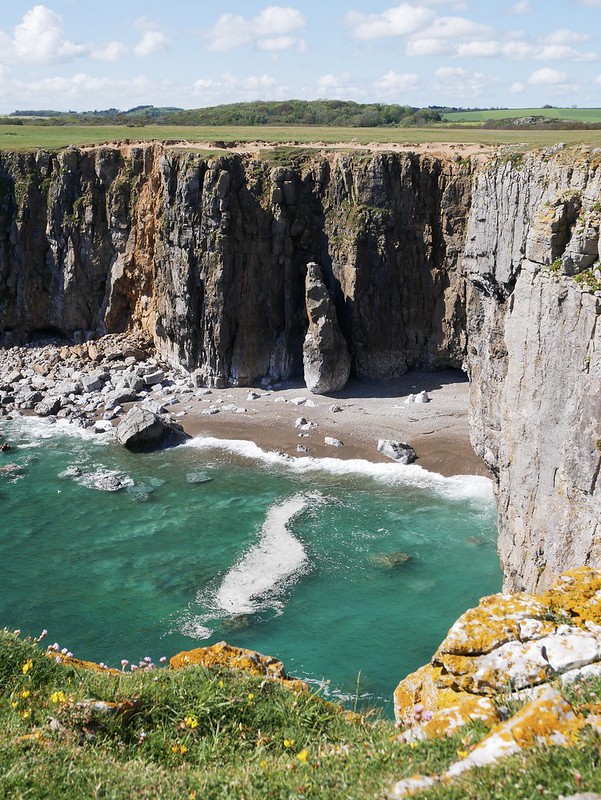 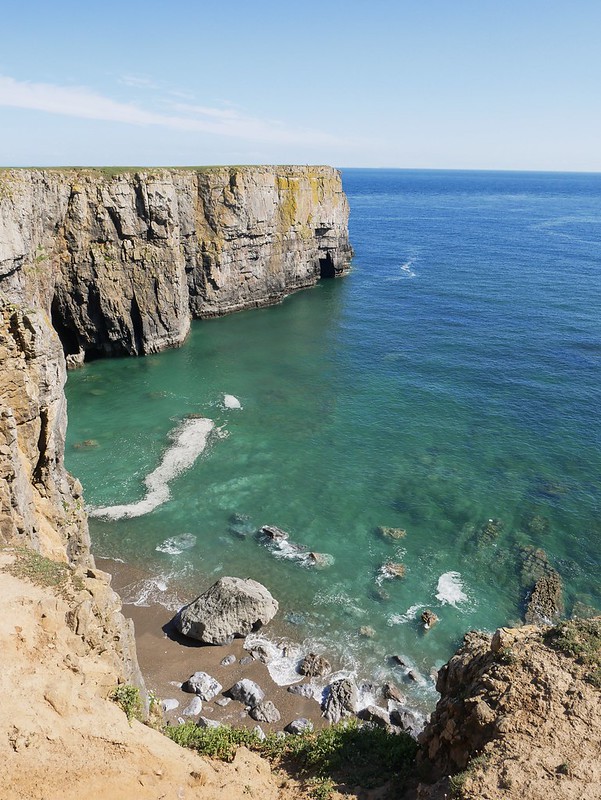 We had a bit of a drizzly day ahead of us but we ventured to the northern coast of Pembrokeshire to see Strumble Head Lighthouse. As usual we were happy to park a few kilometres away from the sight to get free parking and avoid driving the crazy narrow roads. The lighthouse was closed to visitors but even if it was open I don’t think we’d of been too impressed. There were a few seals swimming in the sea below us which was nice to see and as we walked along the coast back to Helga a mystical low lying fog drifted through. The headlands were layered behind one another in the dense fog and purple foxglove flowers filled the grassy slopes beside us.