We were under the impression that it was a bank holiday weekend, so we thought arriving at Rhossili Beach on the Gower Peninsular would be fine at 5pm on the Monday. We’ve visited this area before but thought it would be nice to return but we regretted our decision instantly. It was HEAVING with people. The road leading to the famous Rhossili beach suddenly narrowed and there was a crazy amount of cars trying to get through in both directions. I remember when we visited back in 2015 it was pretty quiet, the carpark was small and cars were allowed to park for free along the grass verge with an incredible view across the beach. But now it was all paid parking, so busy it spilled into an overflow field. Eugh we hated it already. 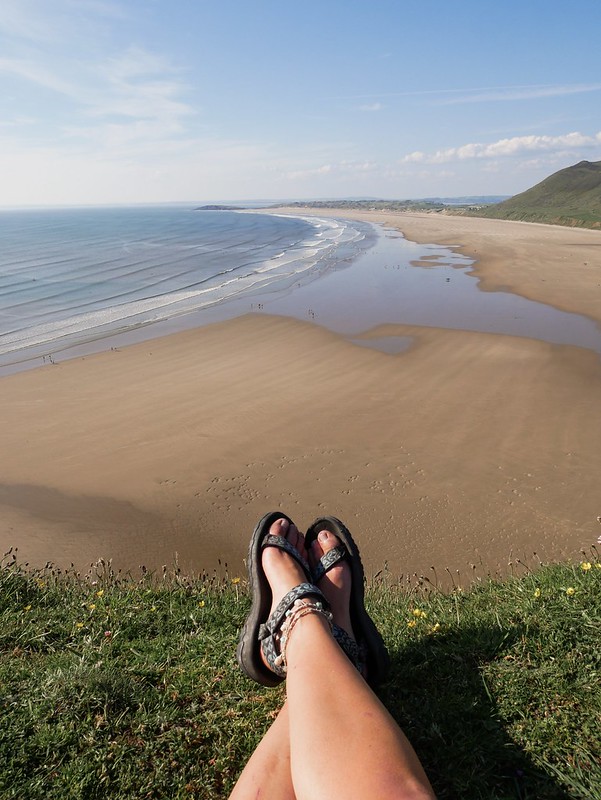 Anyway, it was a lovely, warm evening so we took a little stroll along the cliffs. The beach has been voted in the top 10 best beaches in the WORLD which I don’t really feel is deserved. We much prefer tiny coves to huge expanses of sand but there’s no denying this was a pretty beach due to the area being so undeveloped; it was backed by a lush green hill with just one lucky house built on it. The sea however was a foul greyish brown colour and albeit there were people swimming I certainly wasn’t tempted to go into such murky water. There were even a couple of shipwrecks on the beach and we could see the old metal structure rising out the sand like a newly discovered dinosaur skeleton. 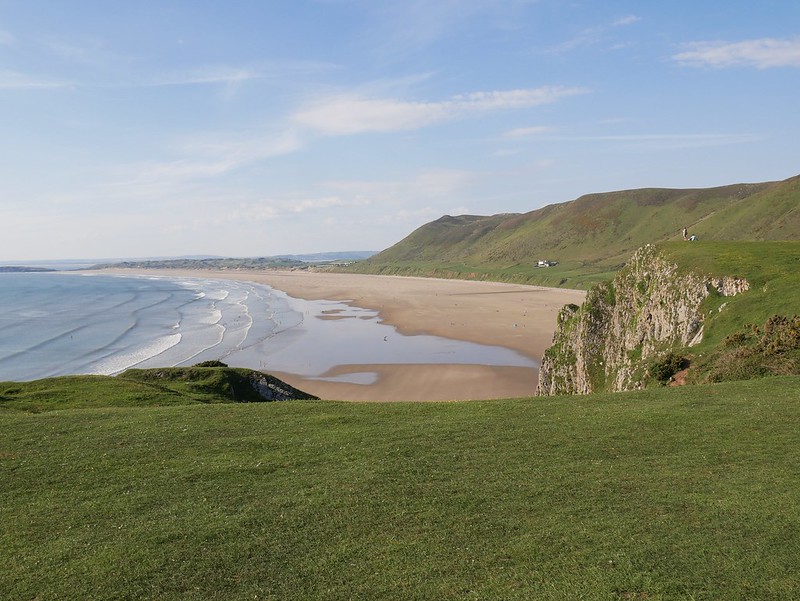 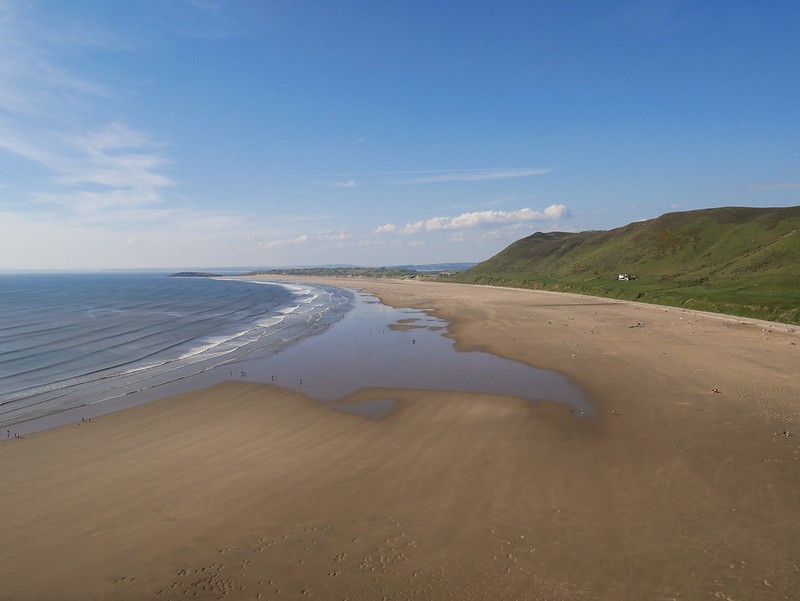 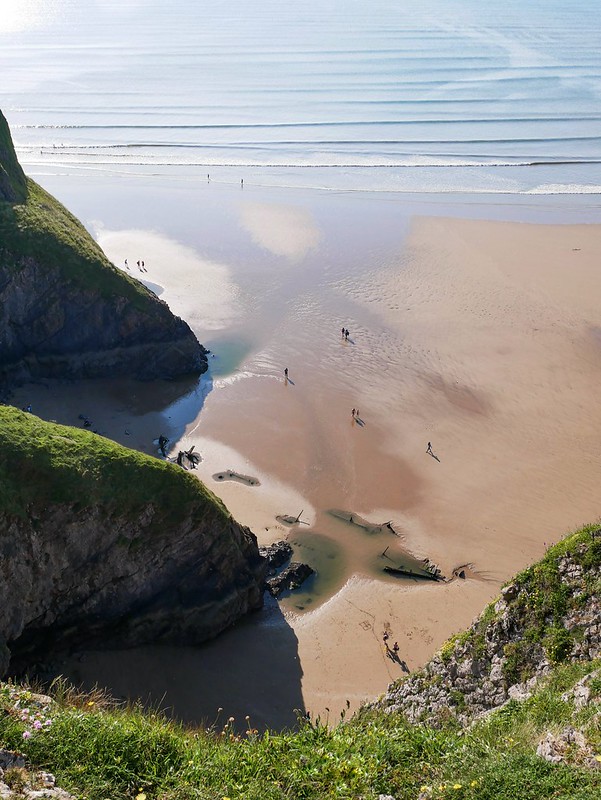 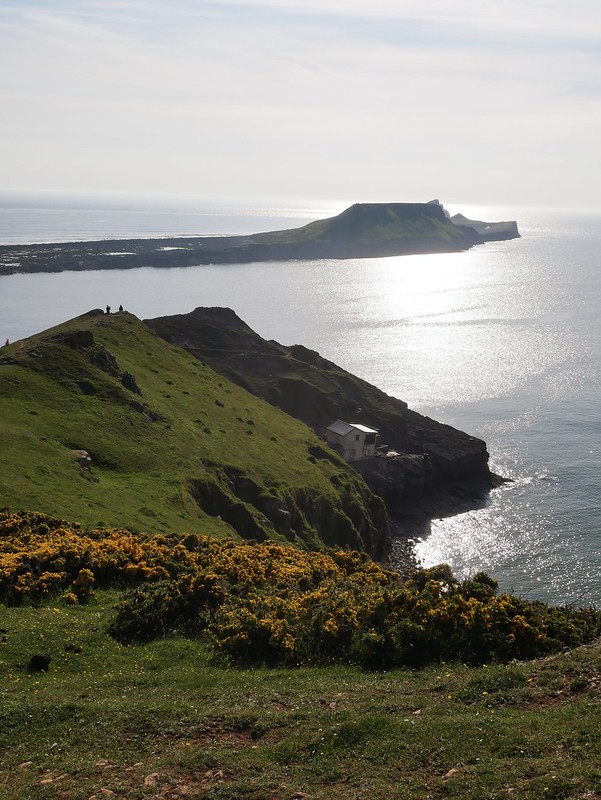 We were parked up in the village but decided to move to the overflow parking area when it started getting quieter around dinner time for a beautiful view of the sea. Right as we pulled up in a nice area with a few spaces around us a van pulled in next to us and a dad with two kids and the strongest Birmingham accents started talking to us. All I wanted was to sit outside and enjoy the view in silence, not make small talk with strangers. Luckily they headed to the pub and as they walked off the kids were asking their dad for shandy’s to drink, they were less than 10 years old! So we shut our side door and opened our windows, preventing any socialising when they returned. It was a nice spot for dinner though, with the sea below us and a perfect view of the sun dipping below the horizon. 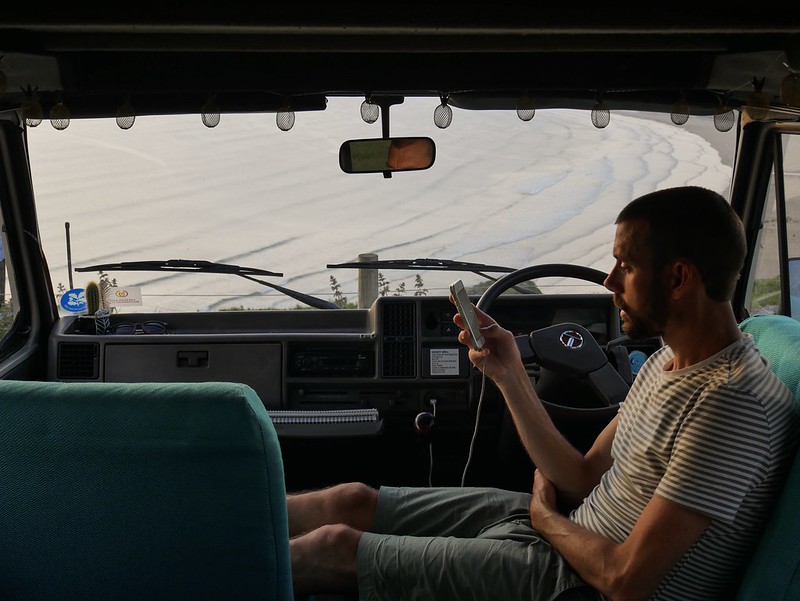 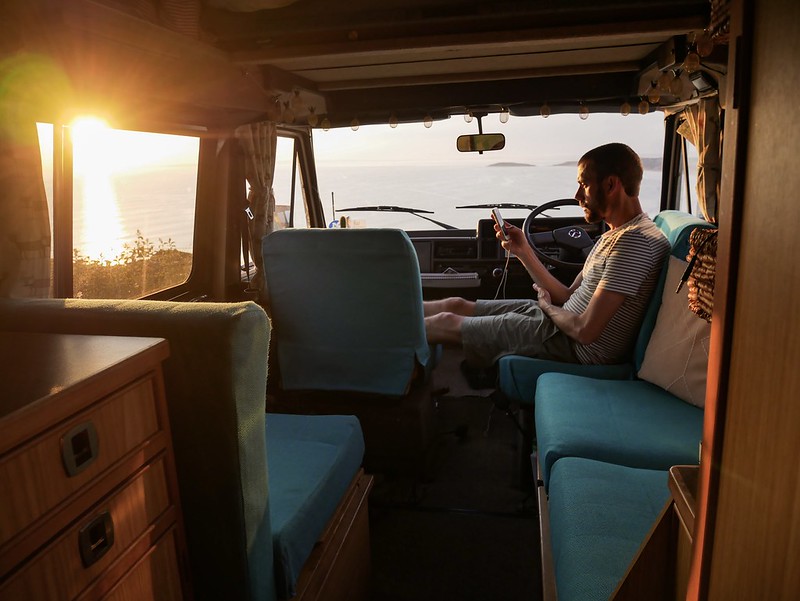 The next day we headed back to Rhossili to do a big hike across to Llangennith where a friend of mine lives who I haven’t seen in a decade. The trail led us along the grassy hill above the beach until we arrived at a campsite. The place was so busy it felt like we’d stepped into a carnival. There were people everywhere and tents and vans packed in like sardines. I got my phone out to see if there was some sort of event on – turns out it was bloody half term and that’s why there were still people holidaying. I also googled how much it cost to camp there, £25 for our van size or a tent or £40 for a larger motorhome. Campsites must make an absolutely killing in summer, thousands every day. It wasn’t even nice, I can’t imagine paying to sleep next to noisy families.

The campsite had a trail leading directly onto the beach where everyone was converged, even though there were 2km of almost empty beach in either direction. It was quite nice walking along the sand though, considering we’ve spent a lot of this trip at the coast we very rarely walk on the beaches and instead prefer to view them from the cliffs above so it was quite a treat feeling the sand beneath our feet. The waterline was covered in clear jellyfish with purple circles, little crabs and conical shells.

Once we were at the end of the beach we continued round the headland to the next beach where we stopped for some lunch. The rest of the route to meet my friend wasn’t very pleasant as it involved walking along the narrow country lanes. It was unbearably hot, we were running out of water and I desperately needed a wee so I went in a little grassy passing place. As soon as I released the flood gates Craig said a car was coming so I instinctively pulled up my pants and I stood there as a little postal van drove by, feeling wee continue to pour out of me. For fucks sake. To be fair it was only a little bit but geez, I obviously didn’t put the brakes on properly. 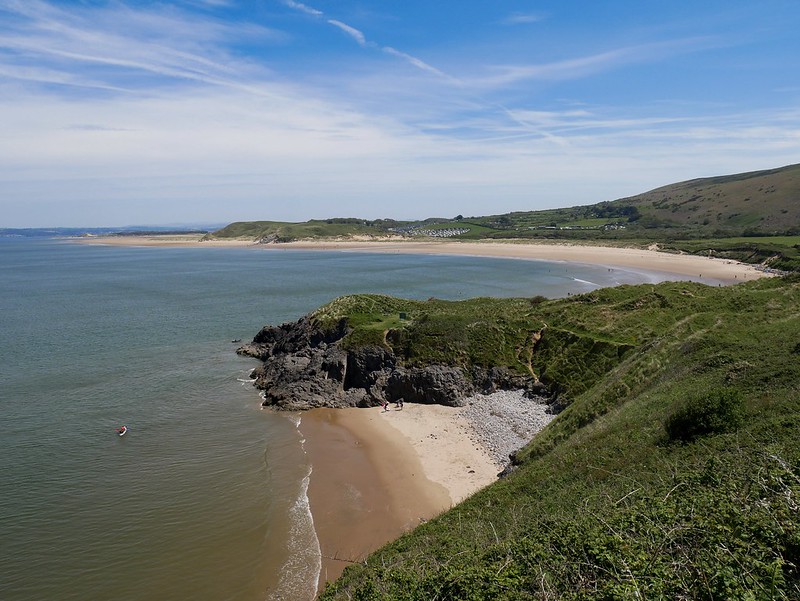 After having a nice catch up with my friend at a lovely little farm she runs, we headed back via the countryside route. We were the only people hiking this path and it was evident why when we began sinking in bog. When we walked past the carnival campsite again we noticed they had a big toilet and shower block open without any code required and we thought heck let’s have a cheeky shower. We desperately needed to cool off but ironically the water was hot – any other day and a hot shower would be grand but not today. But we did feel a lot fresher afterwards.

That evening we camped in a really peaceful forestry car park. It was a lovely spot to just listen to the tweeting birds but it soon turned to shit. Soon after going to bed we heard people shouting outside our van. It sounded like teenagers giggling and screaming. Torch lights were visible through the gaps in our curtains and we laid there wide awake wondering what they were doing out there. When you can’t see anything your imagination runs wild, we heard the two girls say something like “yeah there’s people in there, let’s go to the front of their van” and we panicked. What the fuck were they doing to our van? We were sleeping naked so Craig quickly shoved on his clothes and jumped out the back door. The two lads had a torch on him and then the girls quickly reappeared. I opened the side door and asked what was going on and one of the girls came right up to me (bare in mind we still have a covid pandemic going on) so I frantically said “please don’t get so close!!” She backed away and in the cutest Welsh accent said “I’m so sorry we were just taking a wee by your van because there’s boys here so we didn’t want them to see us…I’m so sorry if we annoyed you” I said it was fine and I didn’t mind them weeing and that I was just worried they were doing something to my van. They seemed totally genuine and after apologising a few more times they started the engine and drove off. Geez. It’s impossible to sleep after shit like that happens though. To be fair they were probably more scared than us, they looked absolutely horrified that we’d questioned what they were doing around our van. I hope I didn’t cause them to stop weeing half way through and slightly piss their pants like I did earlier.