We really felt like we wanted to find a quiet spot for a few days to relax so we headed to the western corner of Brecon Beacons National Park. A fairly narrow lane wiggled it’s way up and down some hills to a beautiful location beside a river, perfect. There were two other vans camping for the night but one couple were so noisy. They had two poorly trained dogs who they allowed to roam freely yet they constantly attempted to call them back. I just wanted to open our door and tell them to either let their dogs wander freely or keep them on a leash, stop fucking repeating their names.

The following day we decided to do a big hike up to a couple of lakes. It was a very remote route, totally off the beaten track with just us and the sheep. Eventually the mountains that looked so far away when we started the hike were just ahead of us and we veered left to visit Llyn Y Fan Fawr first. The lake wasn’t encircled by mountains like the next lake is due to be so we decided to cut the hike short and head up the mountains. This involved an extremely steep sheep track up the grassy slope. We cut a few kilometres off the hike by taking this shortcut which was actually a relief. As we reached the top we were suddenly on the main track filled with people. It was a bit of a shock after such a quiet route and there was even a massive group of 30 kids. The track we were on involved a couple of very steep inclines and on one of them we had the kids squealing right behind us so I hiked so fast up that damn hill trying to get some space between us and them. 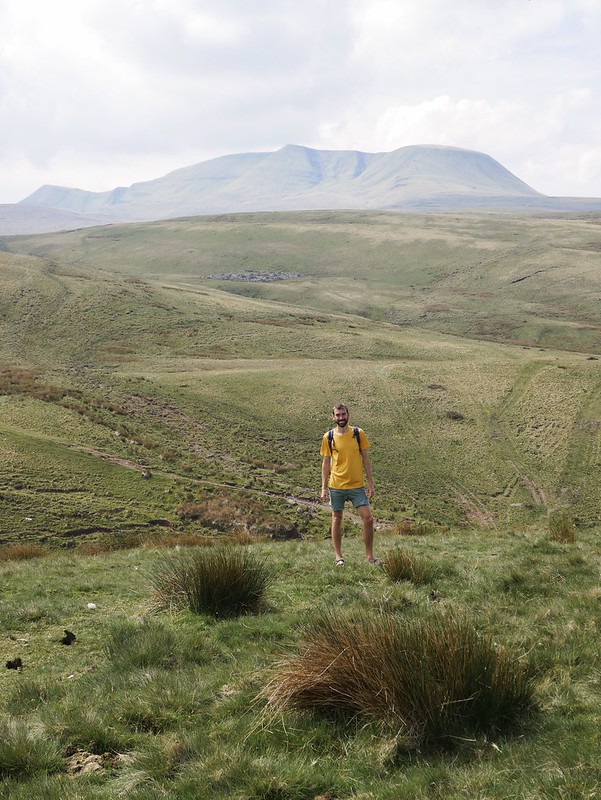 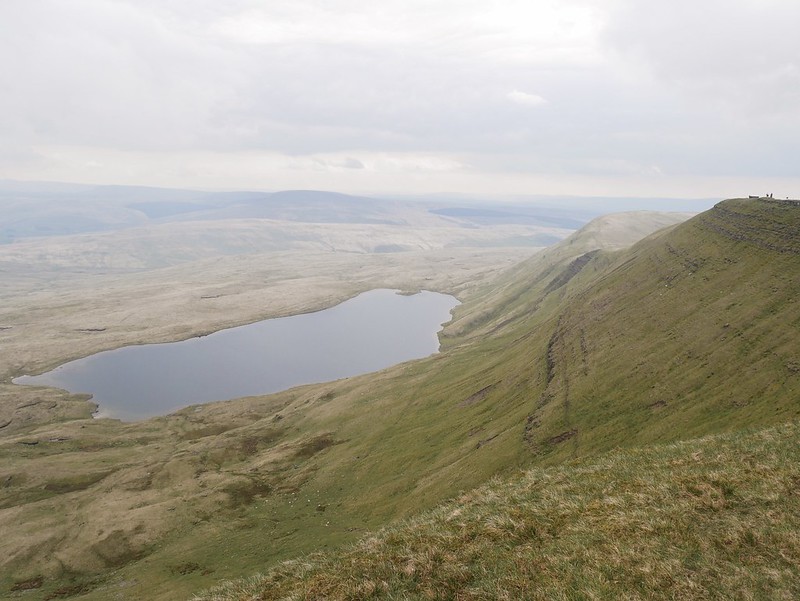 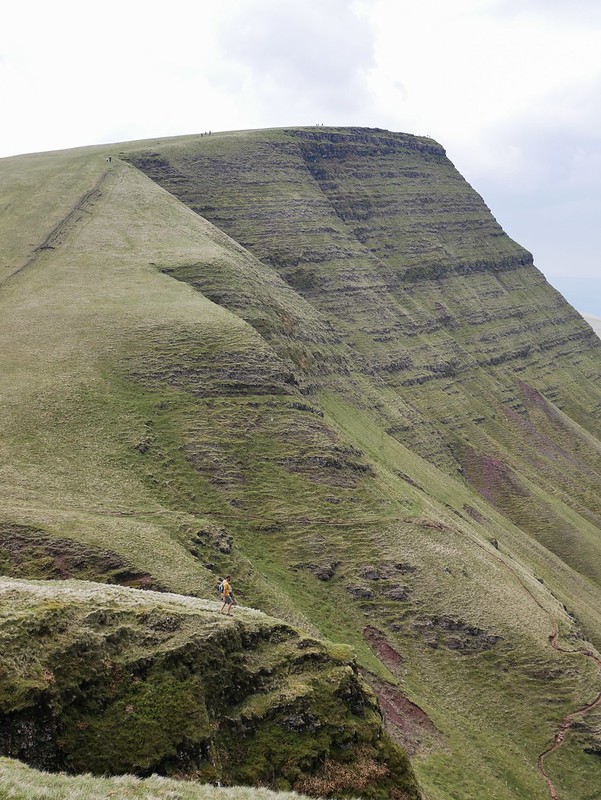 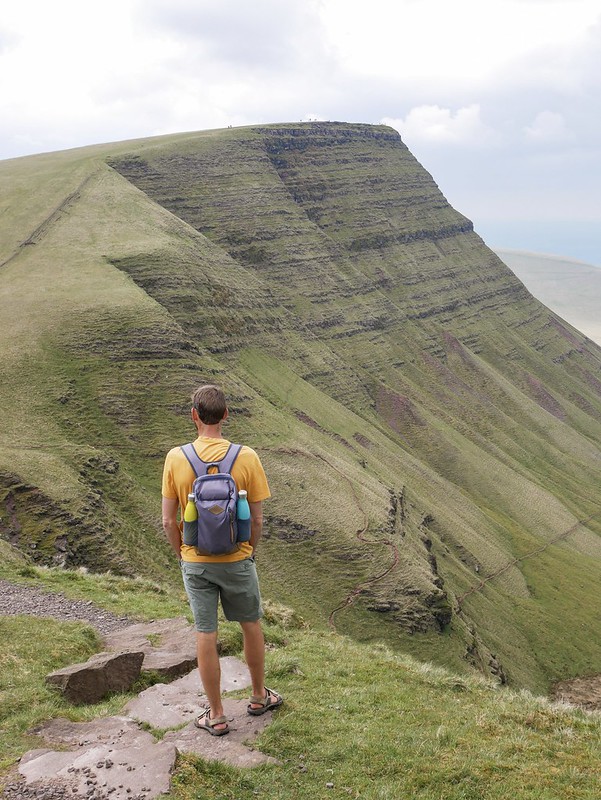 We soon got views of the much more impressive Llyn Y Fan Fach below us. A beautiful curve of mountains, shaped like a horseshoe were encircling the lake. The mountains weren’t rocky like typical mountains, they were more like green hills carved and shaped by ancient glaciers. The trail followed the ridge all the way around the top, gradually descending until we were on the shores of the lake. We then had to make our way back to our remote path which involved some off-piste routes where Craig jumped across a stream and plummeted his foot into some peat bog which projected up his leg in big brown splatters which I found hilarious. We ended up walking 20km and were shattered by the time we got back to Helga. 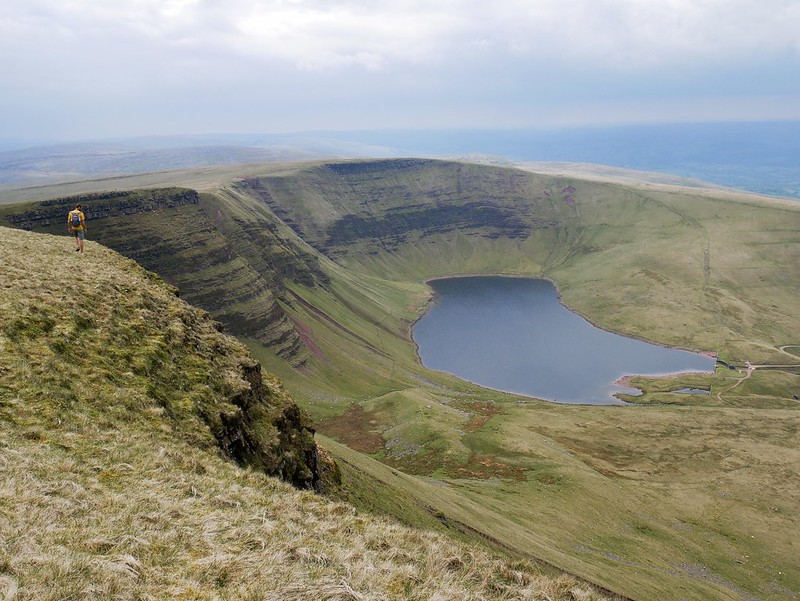 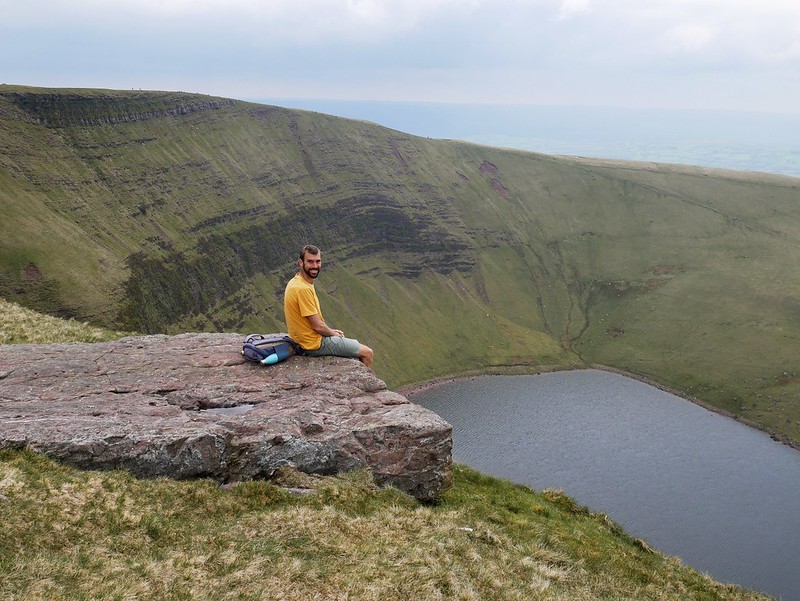 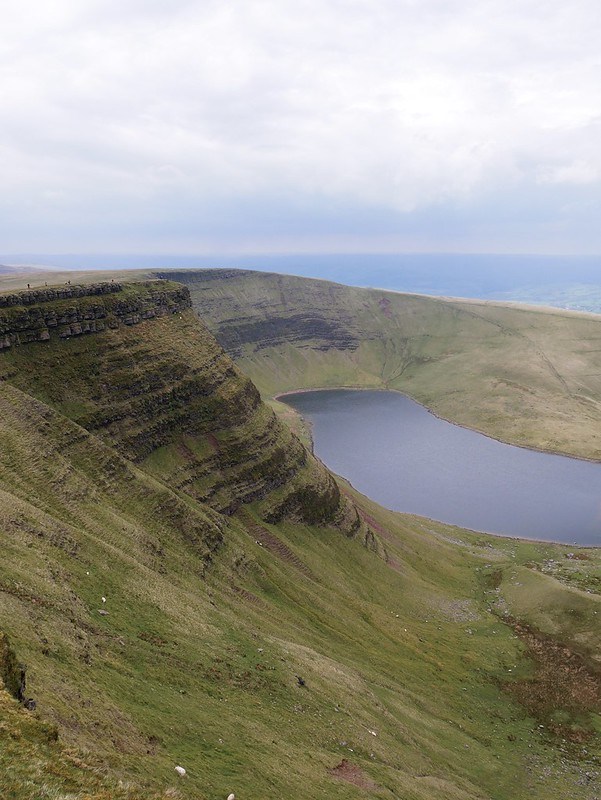 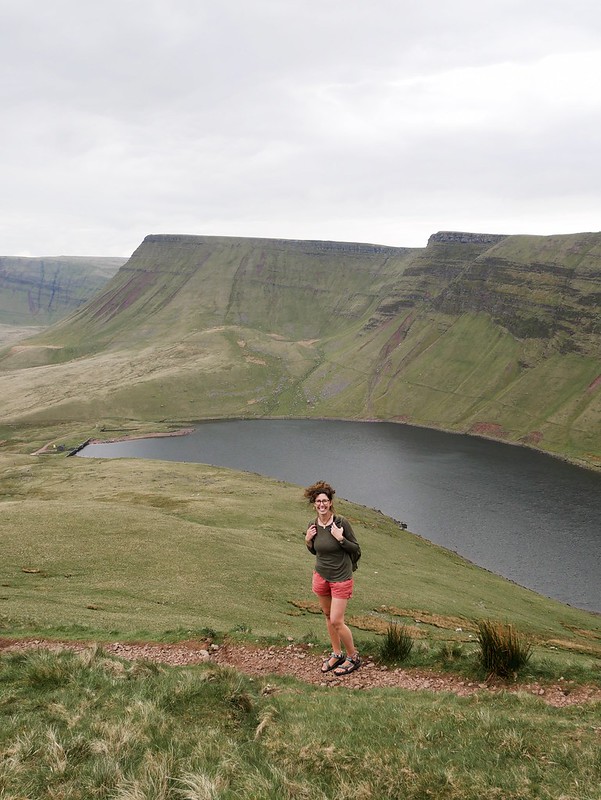 It was the bank holiday weekend so the carpark was quite full with cars when we got back and we soon realised about 6 of them were all together and were planning on camping. Some had tents while others slept in their cars or under tarps. They had a fire and started playing music, I can’t stand people like that, why come to a place in nature if you’re just going to play loud music? We had a cracking sunset though with a fuchsia pink sky and much to our surprise the lads stopped their little party at 10pm and all went to bed. Wahooo! Not only that but they didn’t leave any rubbish when they left the next day, I shouldn’t judge or presume they would leave rubbish just because they were young lads getting drunk, but in our experience unfortunately that has been the case in the past. 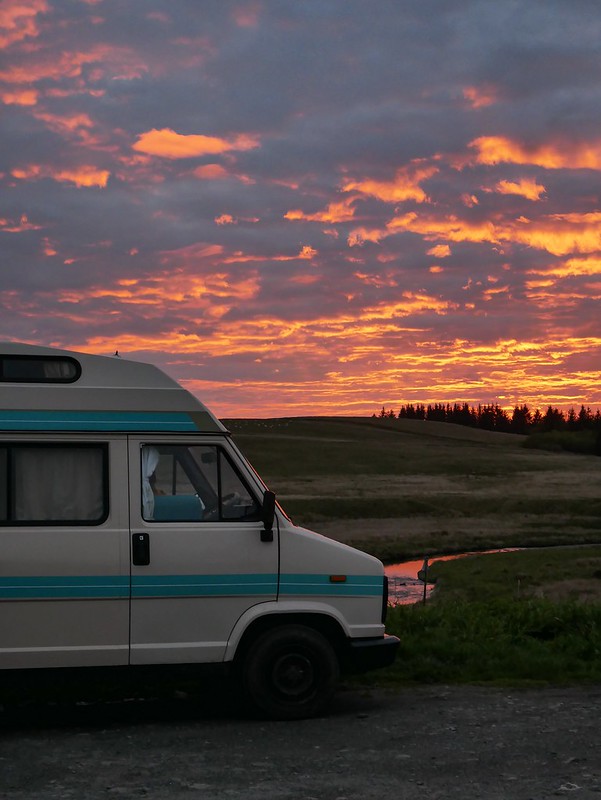 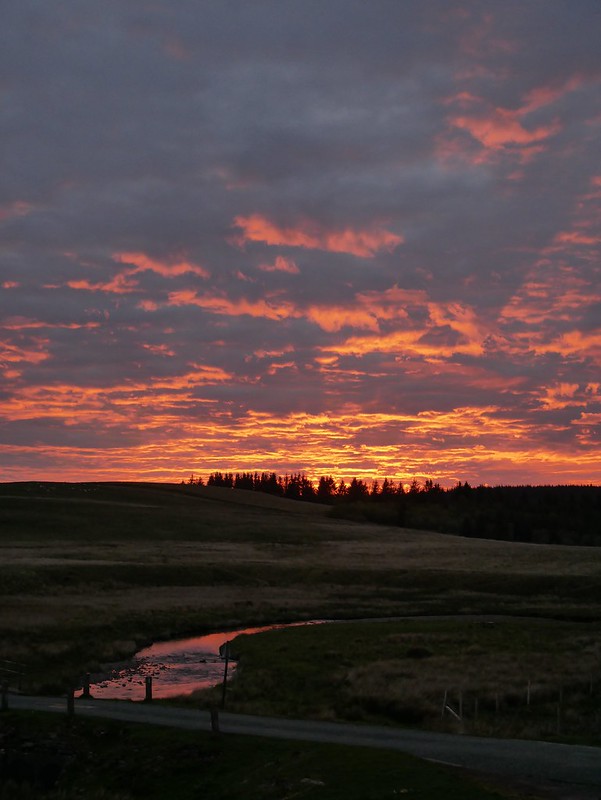 We didn’t dare leave our lovely spot due to the bank holiday so we stayed put one more day and it was perfect blue skies. Finally, we could have our first chill day in our 2 months on the road. It’s all we’ve wanted to do for so long, just camp by a river and spend the day relaxing and swimming and finally it happened! We found a perfect, deep spot in the river for swimming so we took our camping chairs down and read our books all day, bloody delightful I tell you! We were kept entertained in the early evening when some guys drove down the river in their Land Rover…they managed to get stuck in the river so they called a friend who had another Land Rover. We watched as the ‘recovery’ vehicle drove right through the river, full of confidence. A family was having a picnic on an island and shouted to them “careful it gets quite deep in areas” and a minute later “it’s 3ft deep there!!” The lads ignored her advice and we watched as the front of the car slipped forward into deep water. Oh dear. It was quite amusing, particularly when the lads were all inspecting the situation and the lady smugly called out “I tried to warn you…” They were revving the engine and water was spraying off the back tyres, projecting into the sky…but it was totally stuck so half an hour later a huge tractor arrived to pull both of them out the river. Before bed Craig noticed Helga’s exhaust was hanging low and a rubber band had snapped so he went about trying to fix it. We managed to use a bit of wire and a tie-wrap to hold it in place until we visit a town to buy the new part. 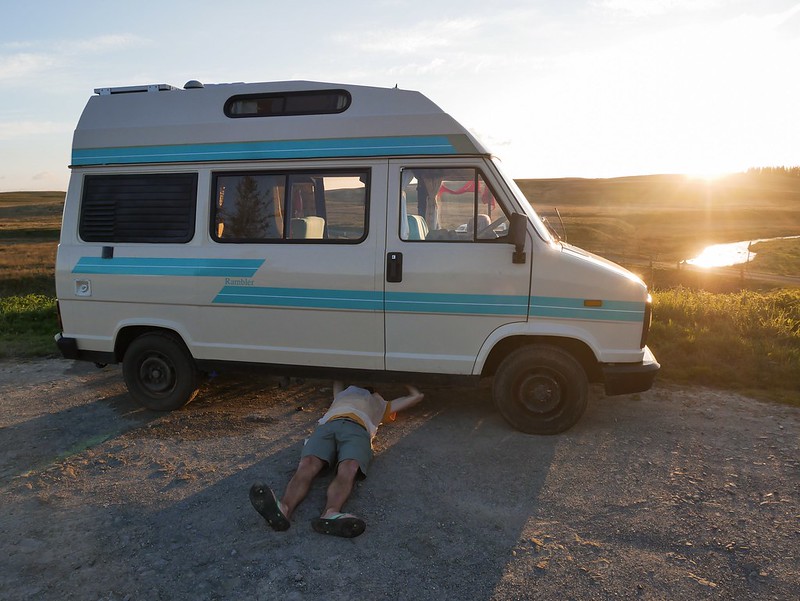